Our plan for the day was to visit Makino Picland Metasequoia Road which was just  4.5 km from Shanshui House in the morning, then we would proceed to Mikata Five lakes and Rainbow Line Sancho Park. In the late afternoon we would go eastward to visit Hikone Castle for cherry blossom and at night we would be staying in Gifu town.

By the end of the day
Makino Metasequoia Road was lovely whether the trees had leaves or no leaves. It was still early Spring and the leaves had yet fully grown. The trees and their bare branches still managed to looked majestic. Mikata Lakes were lovely especially when viewed on high ground. Hikone Castle was one of the places which was supposed to have late-blooming cherry blossom due to the cooler weather. I read on the internet that its “best viewing” period was a week later than that Kyoto’s. But this was not the case. The cherry season was certainly over when we visit it today.

We had visited this Metasequoia Road in Autumn a few years ago and its trees were thickly covered with leaves. Though during this visit the branches were still bare, the two long rows of trees still looked majestic. 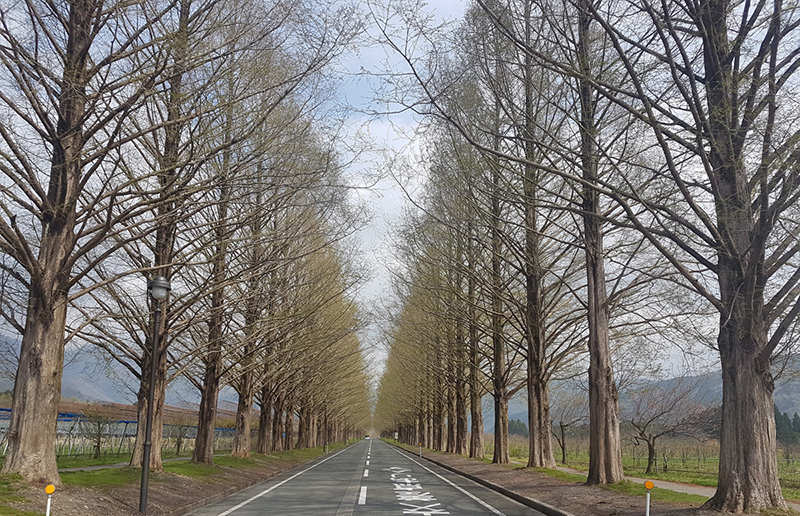 500 redwood trees were planted along a 2.4 km stretch of road. The  best looking stretch started at Makino Picland fruit farm shop. We stopped our car at a carpark beside the shop and came down to explore. We took a walk down a path by the side of one  row of trees. Looking up we were amazed by the straightness of the trunks, that went up and up. 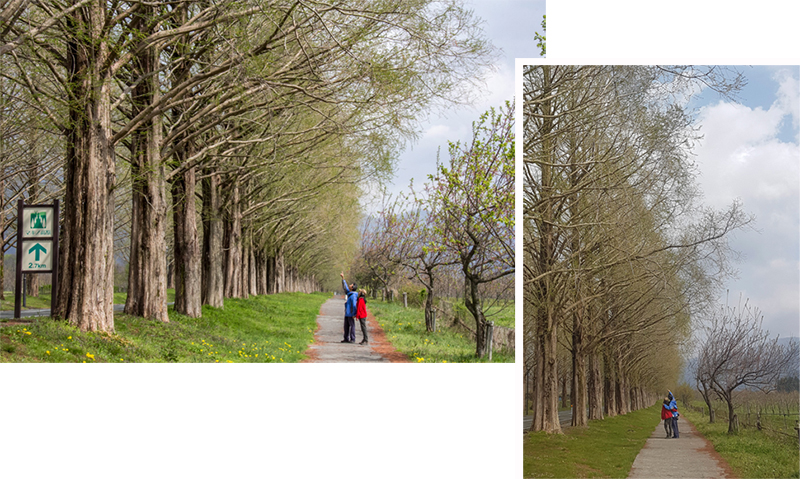 We went into the shop and saw beautiful of photos of this Metasequoia road in different seasons. Every photo was unique and the “best”. Though this was a fruit farm shop, there was no fruit on sale. We were probably in the wrong season. So we just sat down for coffee and icecream 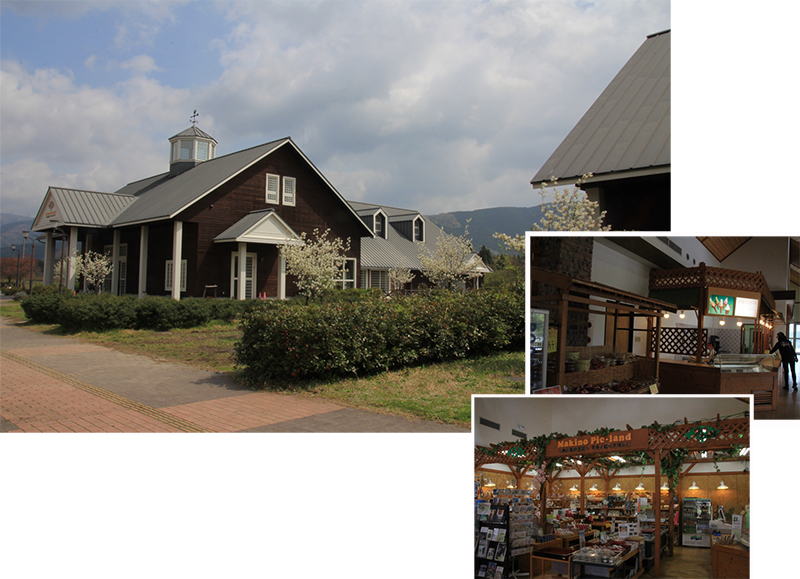 Mikata five lakes consisted of Mikata Lake, Suigetsu Lake, Suga Lake, Kugushi Lake and Hiruga Lake. A good view point to see the lakes would be some where high and that would the Rainbow Line Mountain Peak Park. The drive from Makino PicLand  to Mikata Lake was about 40 km. 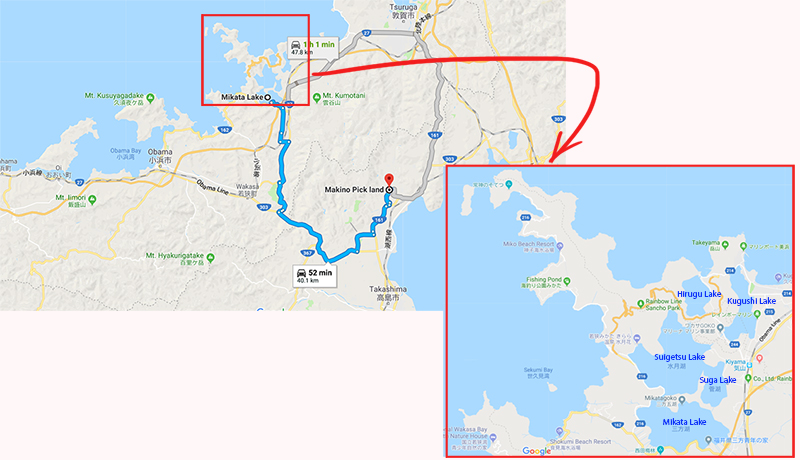 To reach the Rainbow Line summit park we had to drive onto a “Mikatagoko tolled road”, the toll charge was ¥1000 on entry.  This road was the only way to reached the summit park. The road was relatively car-free and there were a couple of beautiful spots where we parked and came down to view the beautiful lakes. Occasionally the scene was “top up” by a blooming cherry tree! 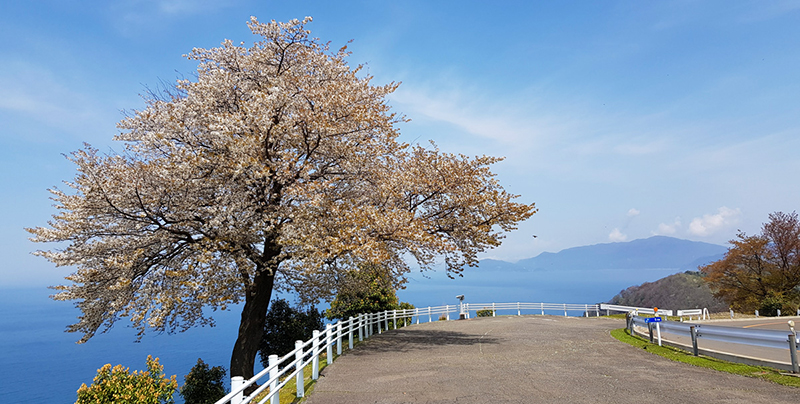 The five lakes were supposed to have different colors, due to their different quality, salinity and depth. Looking at them we could not distinguish the difference in their colors except probably shades of darker blue and lighter blue.  We could not tell where each lake started and where it  ended and where the sea began. All these did not matter as the scene in front was just too beautiful.

Another scenic spot along the Mikatogoko tolled road

When we were driving at the lake level rarely did our road ran along the side of the water so we were not aware of being surrounded by lakes and sea. It was only when we were on higher ground  that we saw the many inlets, twists, turns and curves of these lakes and the many layer of mountains and hills around them. The sights were so lovely that we were reluctance to leave the viewing points. We were not in a hurry to get up to park but eventually the road led us there. 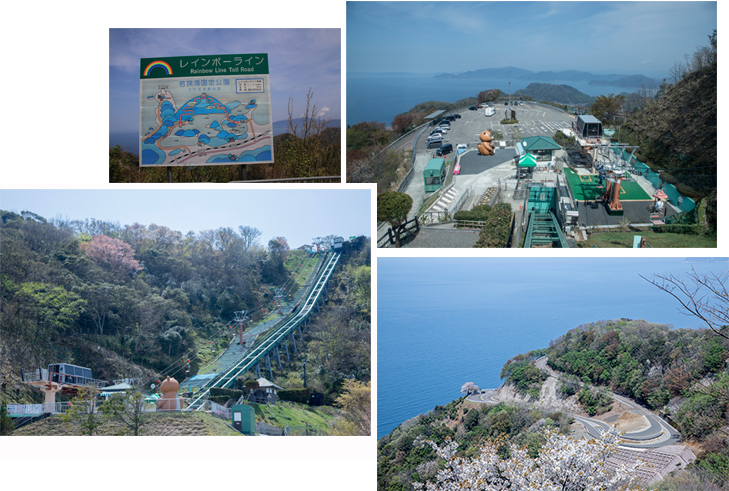 The park had a lower and a upper sections. To get to the upper section we had to go up by cable car or chairlift. The charges were ¥800 per person which covered going up and coming down. Though the tickets were pricey we had no other options as there was no road or route to get up to the upper section. 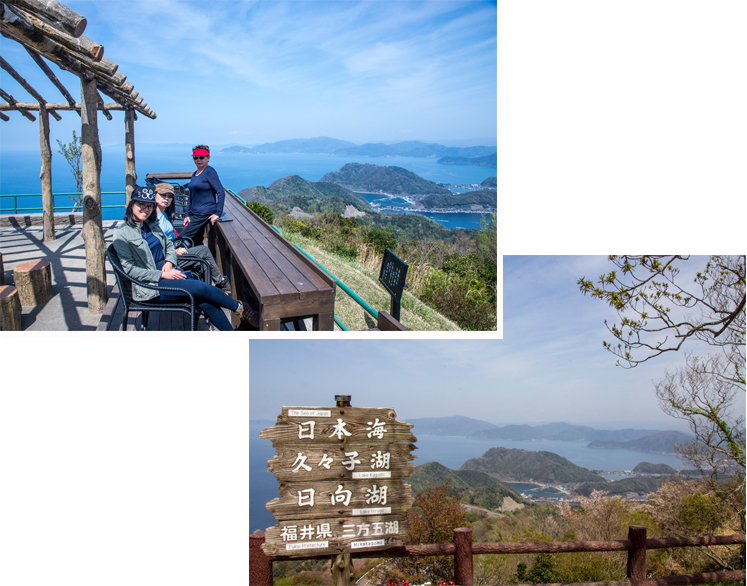 East Observation deck at the upper section of the park

The upper section of the park was not very huge. We walked from one end to the other. From this summit we had a panoramic view of the entire surrounding. 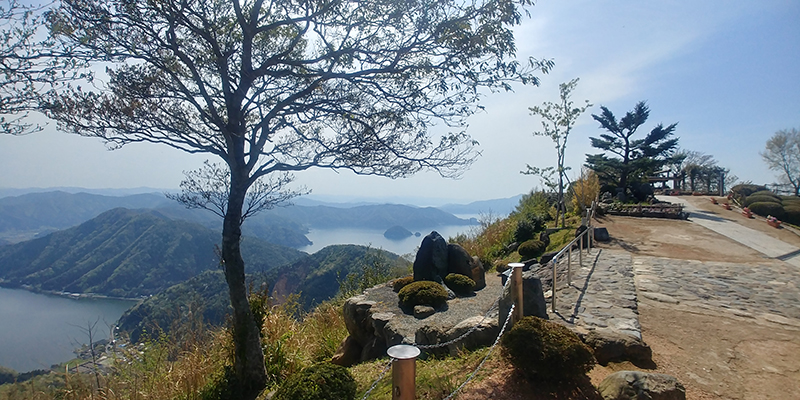 Panoramic view of Mikatagoko and its surrounding

Since we came up to the upper section via a cable car we decide to go down via a chairlift. The chairlift was single occupancy and it was quite fun coming down as the view of the lakes was directly in front of us. 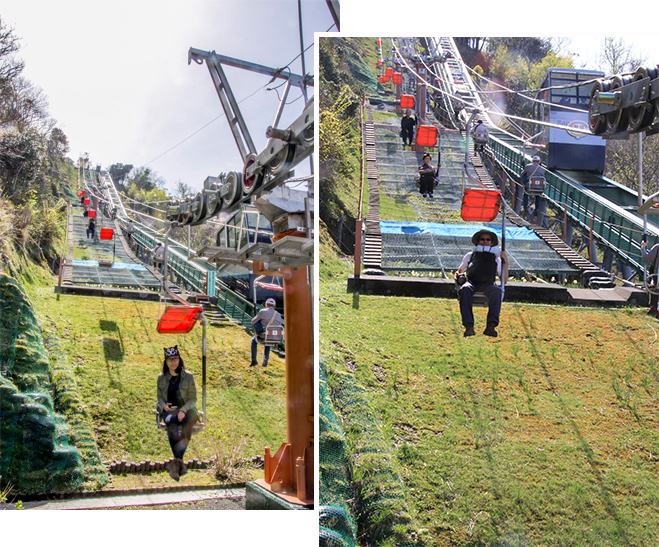 From Mikata five lakes to Hikone Castle was about 85 km, we expected to be at the castle by about 3.30 pm. Since the castle closed about 5 pm we figured we would still have more than an hour to explore the castle. 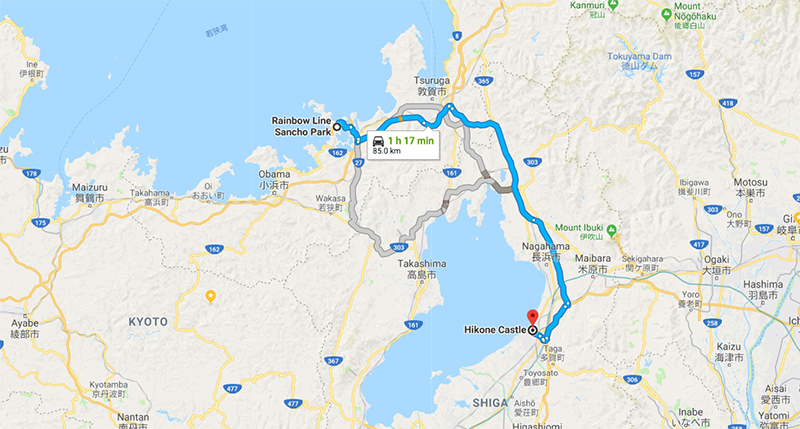 When we was about 30 minutes from Hikone we decided to make a short stop at Shizugatake SA. A run to the restroom, a stretch of legs, a cup of hot coffee and a piece of sweet pastry all done in 30 minutes and we were back onto the expressway again. 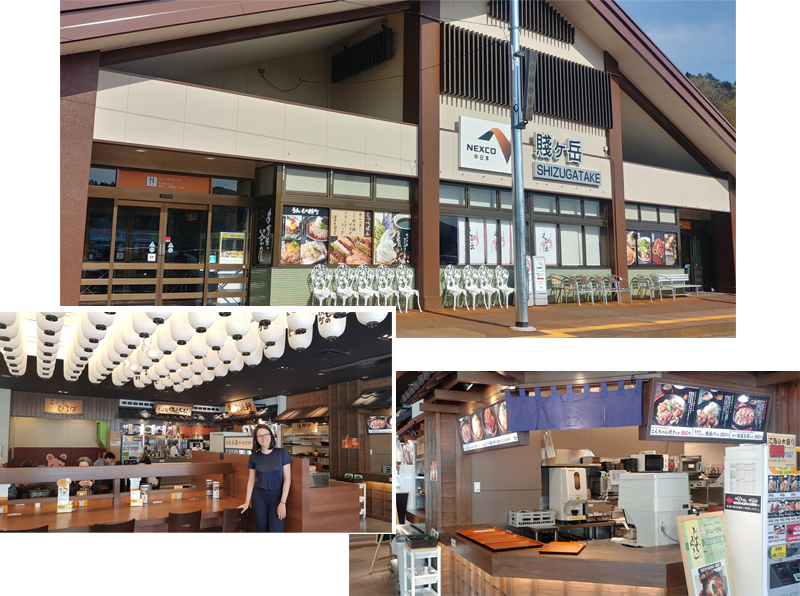 Just when we were near the turn off into Hikone, the GPS misbehaved! It did not direct us off the expressway! It could be that the map was not up to date for the next thing we knew we were driving away from Hikone and the next turn off was 20 km away which meant 40 km to double back. I quickly pulled up google map and found a turn about less than 5 km away. When we arrived at Hikone Castle it was about 4.30 pm. 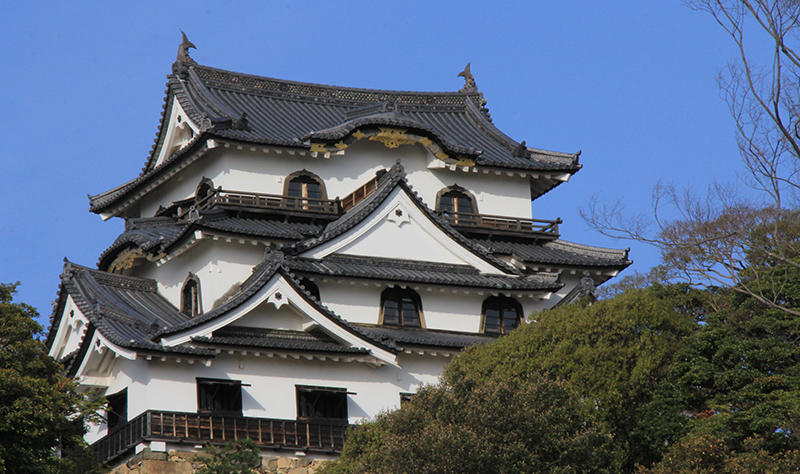 We drove around Hikone Castle moat, searching for cherry blossom which was usually hugging the moat wall on the castle side. Unfortunately it was all green no pink. Cherry blossom season had ended! It was supposed to be still on! It was supposed to end one week later than Kyoto’s. Kyoto “best viewing” season ended on the 4th April so Hikone “best viewing” season should end about 11th April. Today was the 12th and one day late seemed like too late again! 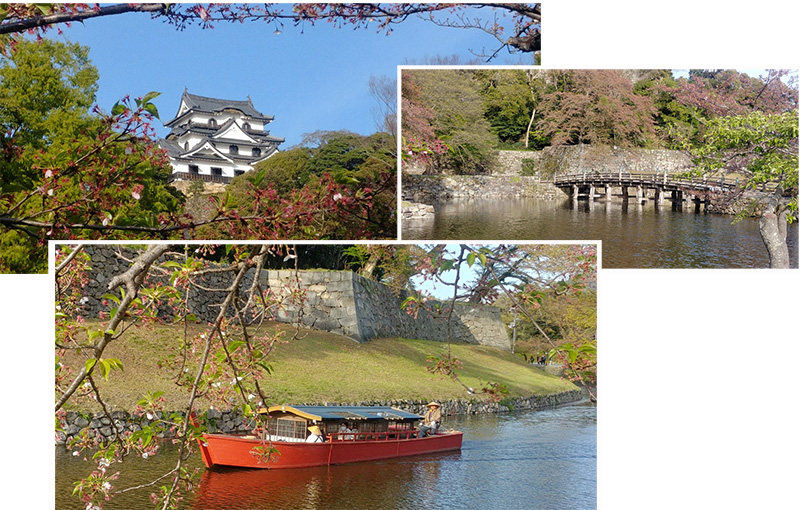 The entrance fee to Hikone castle ground was ¥600 per person and we had only less than 30 minutes to go in, walk around and get out. We decided not to waste our money and just explored the castle exterior.

Our stay was at Hotel Harmonie Terrasse booked from agoda.com. It was a very nice hotel. It was huge and luxurious and the night cost for a quad room was ¥18100 which include breakfast too and free onsite parking. 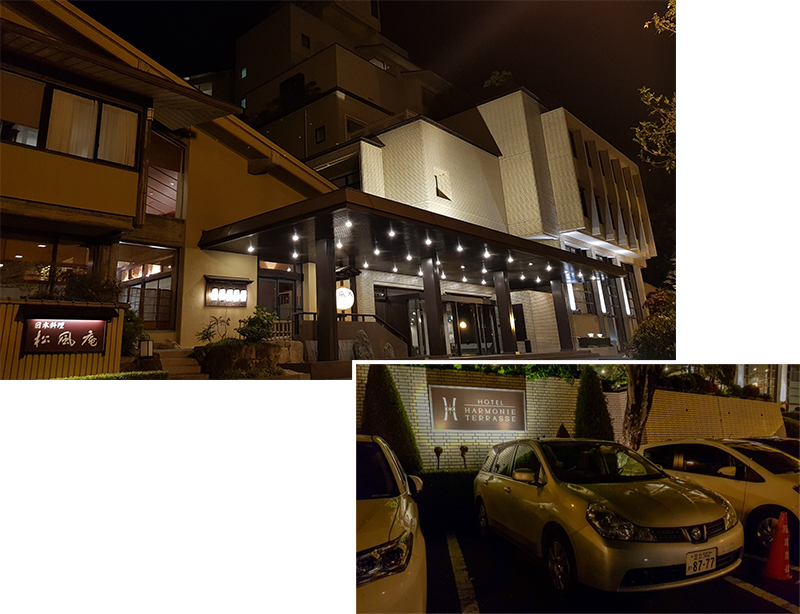 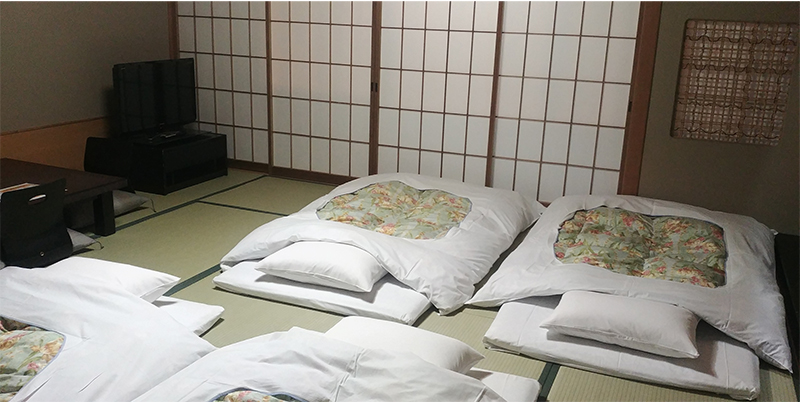 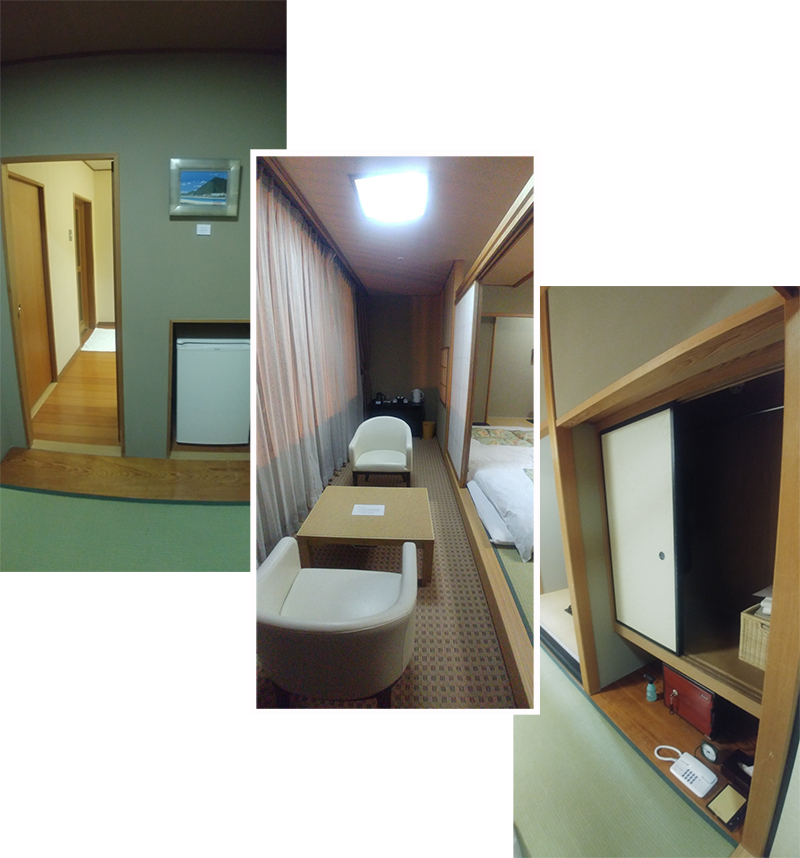 Our room had plentiful of spare areas 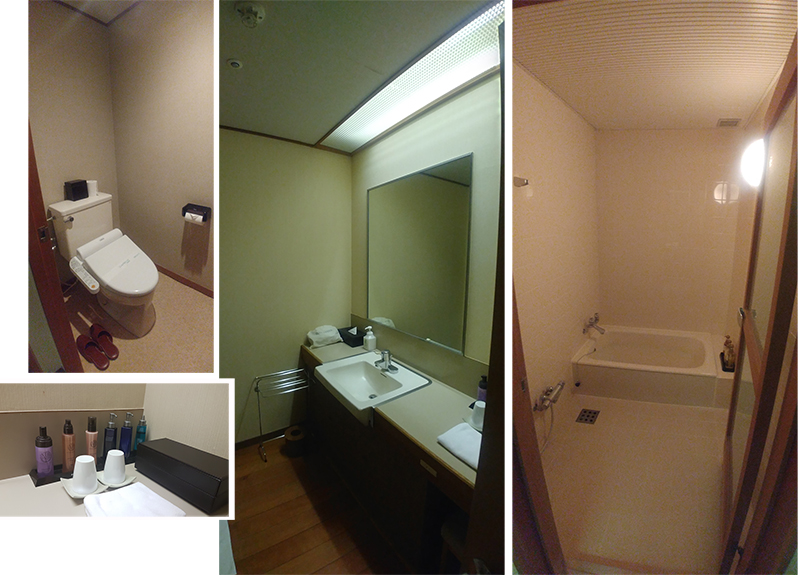