We planned to visit two very famous cherry trees and we hoped we had arrived at the right time to see them. Then we would proceed to Shirakawago Historic village. For the night we had booked an accommodation in Gokayama.

By end of the day
The visit to the two set of famous cherry trees were a huge disappointment. The first set of tree (two of them) Nawashiro Zakura had already shedded all its flowers. The second, Shokawa Sakura had yet to bloom as the weather around it was still cold. Fortunately Shirakawago Historic village saved our day as its cherry trees were at full bloom in.

Breakfast at Harmonie Terrasse was beautiful. Yes, beautiful, our breakfast table was a colorful display of food and crockery. So far into our trip Hotel Harmonie Terrasse was the most luxurious and comfortable of all our “stays”. It was also the priciest but not so much more than some of those that offer so much less. 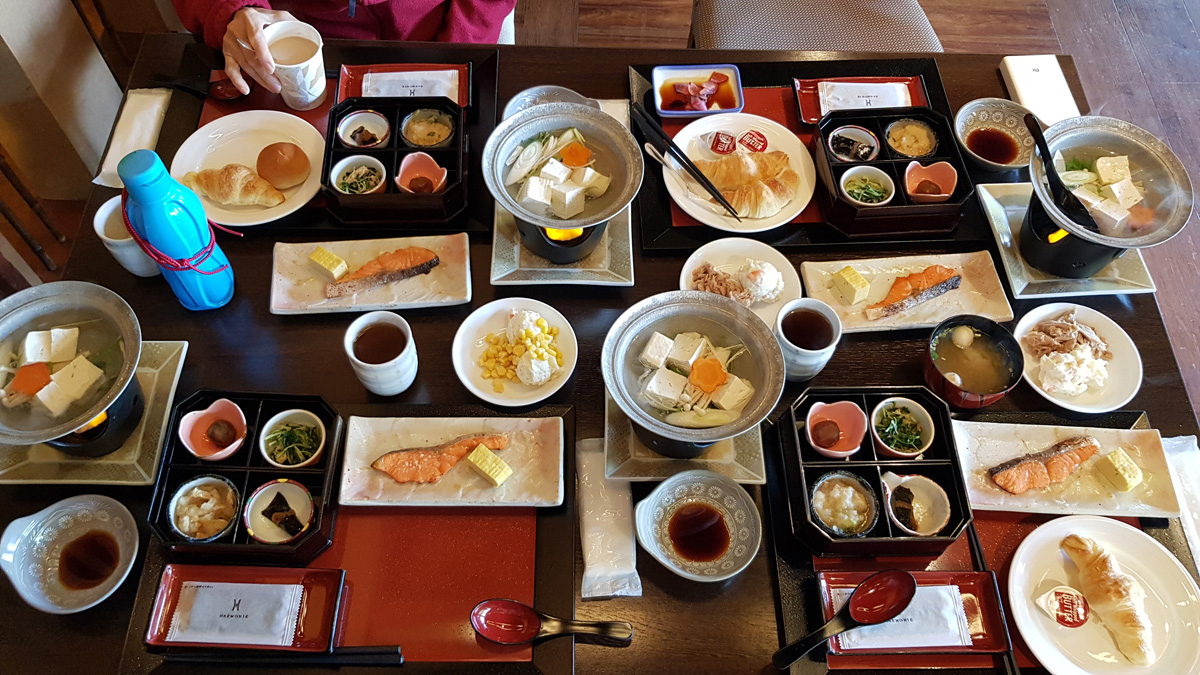 Nawashiro Zakura was a name given collectively to two 400 year old sakura trees in Gero and was considered as a natural monument of Gifu Perfecture.  All round the vicinity of the two cherry trees were rice fields. They got their name from the farmers who named them Nawashiro (which meant rice plants) because these two sakura trees bloomed beautifully when the farmers worked in the rice fields.

When we reached the area we took a while locating the trees. It was not because our mapcode was incorrect, it was because we could not recognise the trees.  All their flowers had shedded and they looked quite different from the photo that we had seen. 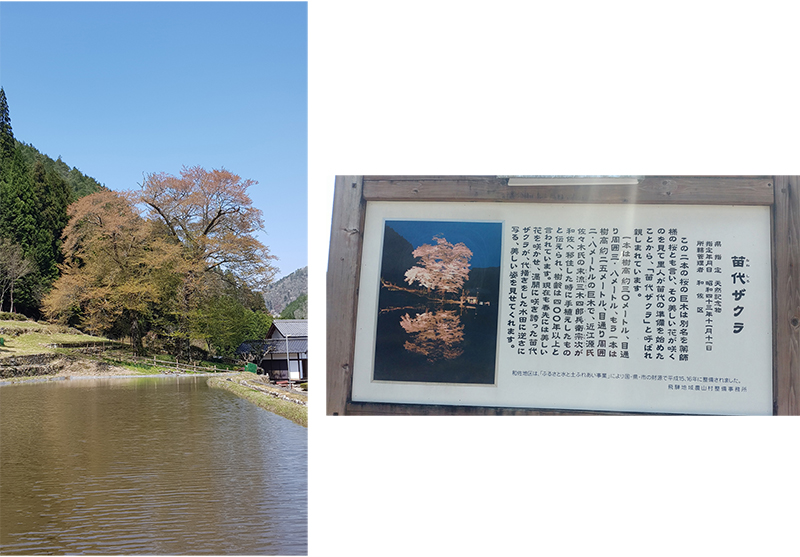 Looking at the photo of the trees on a notice board at the site we could see that when the trees were in full bloom they were indeed very lovely. Especially in the night when they were illuminated, their reflected images in still water of the paddy field “double” their beauty.

The journey took about 1.5 hour, it was a quiet journey through the mountainous areas and there was hardly another vehicle in sight. Along the way we saw some “fish” flags hung across a river. This was a sign of the coming “Children Day” celebration on May 5th. 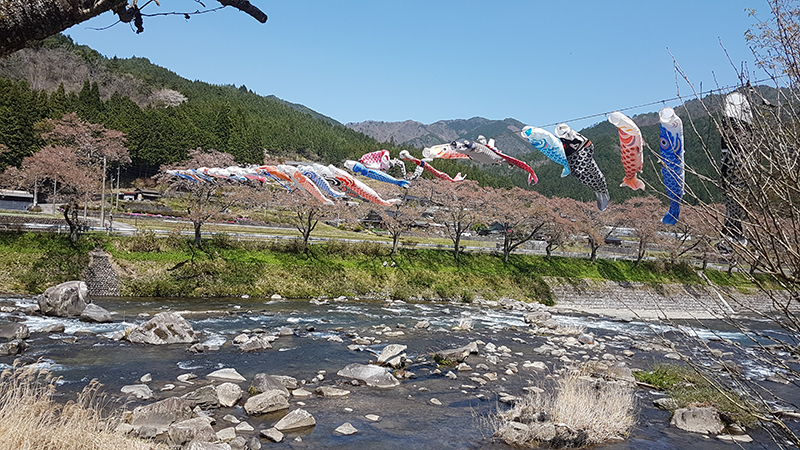 The sakura trees along the way to Shokawa Sakura were flowerless, this “sign” worried us as it kind of signaled to us that Shokawa Sakura might also be flowerless. When we reached the site of Shokawa Sakura not only was it flowerless it was also “visitor-less”! We were disappointed but we felt that we should still make an effort to walk around the area. I went close to the trees and realised that they had thousands of flower buds! These cherry trees had yet to flower! And by the looked of it it would take many days before the flowers would be in full bloom. Sigh…this time we were too early. 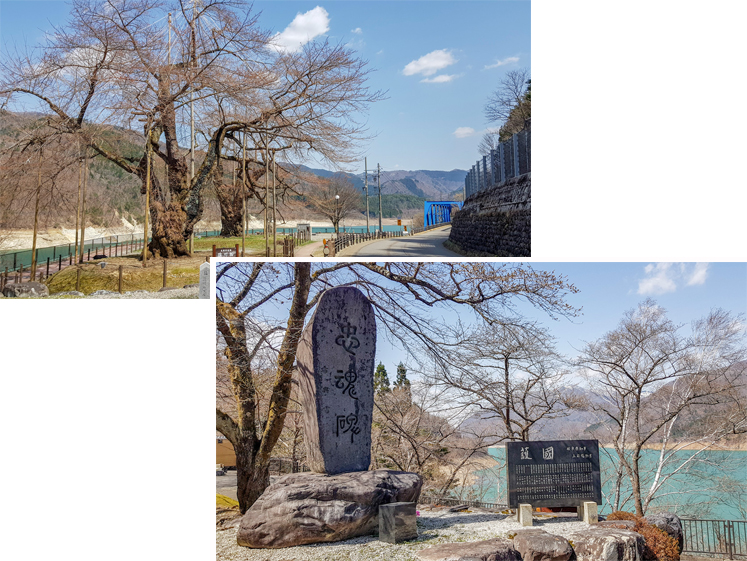 These two trees, Shokawa Sakura, had an interesting history beside the fact that there were already 500 year old. During the construction of the Miboro Dam they were in the way and would have be drown. Luckily they were moved to higher ground in 1960 and the re-rooting went well (which was very rare) and lived till today.

From Shokawa Sakura to Shirakawago Historic Village was just a short distance of 27.5 km. This time we were driving up to the high observation view point first before driving down to the village.  Relying on the mapcode we were able to reach our destination without any issue. Near the observation deck were a huge “free” carpark for cars and buses.

Wow the cherry trees here were in full bloom and they looked so lovely with the gassho houses as a backdrop! 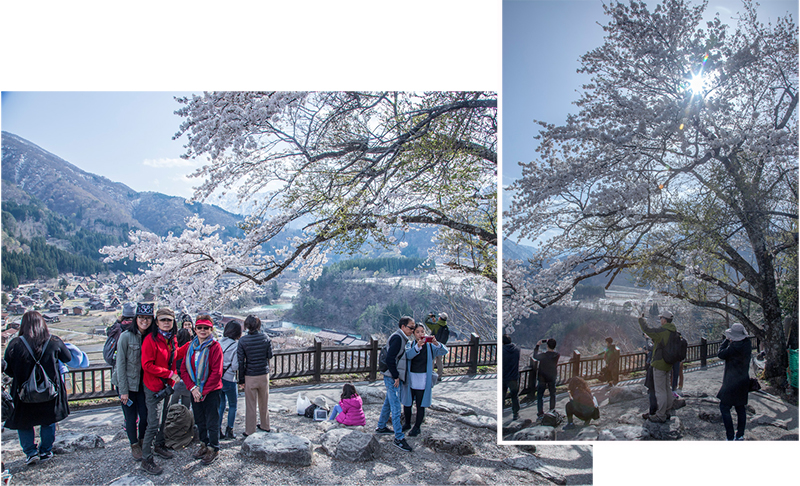 The high observation deck was crowded with visitors. The view of the village was very different from the one we saw a couple of years ago on a rainy day in autumn. At that time this village looked mysterious with an out-of-this-world feeling as it was heavily covered by the misty rain. Today under the bright sun light this same village looked real and “sparkle” with lives as from afar we could see “humans” walking on the village roads. 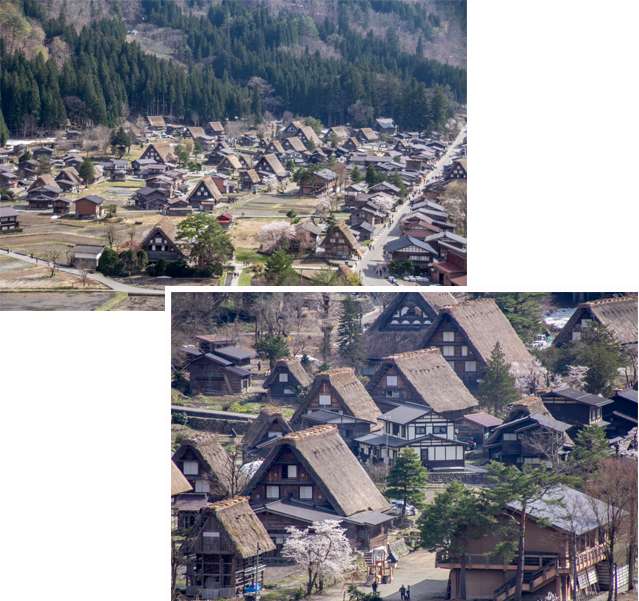 After taking many photos we moved on and drive down to the carpark next to the “pedestrian bridge” that led into the village. The parking chargs was a whopping ¥1000 per entry.  The fee was collected to “maintain the village”. On the same side as the carpark were several gassho houses that were converted into shops and restaurants. We went into one to have our midday meal.  Each set of meal came up to about ¥1000. 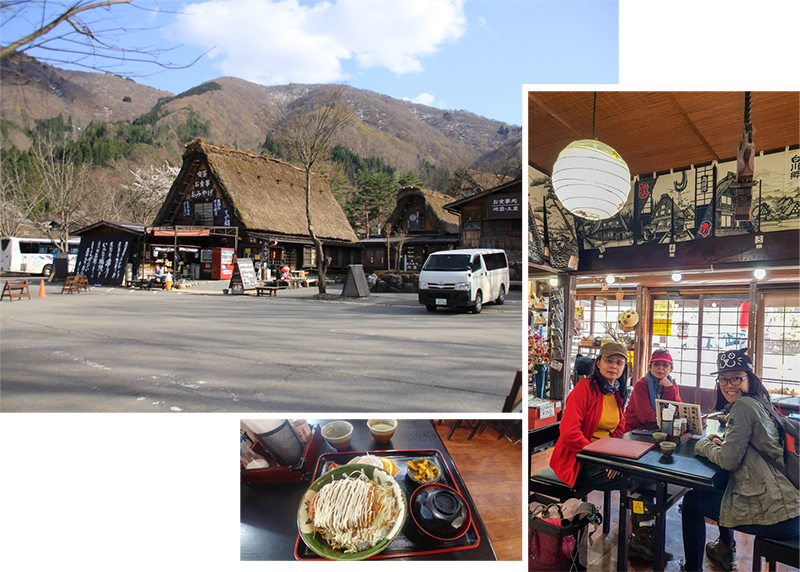 With our stomachs filled we were happier and more eager to explore the village. The village and the carpark was separated by a river. We crossed the river and entered the “Historic Village of Shirakawago”, a World Heritage Site”. 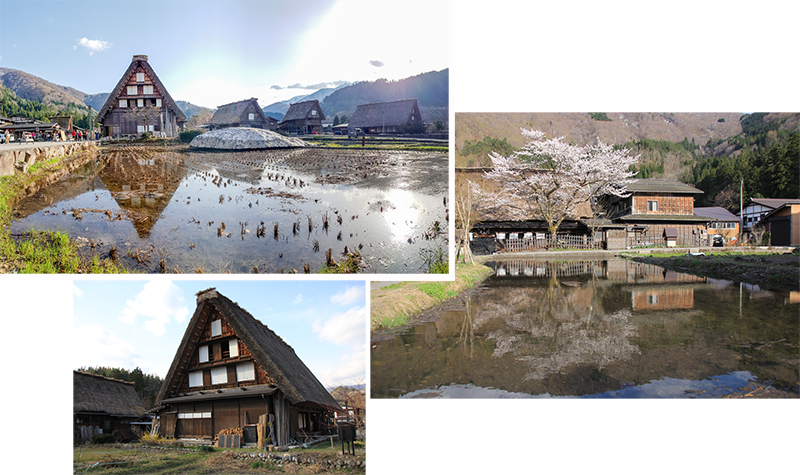 The actual name of this village was “Ogimachi”, it was the largest village and main attraction of Shirakawago. Most of the time it was referred as Shirakawago Historic Village.

Some of these historic houses in the village were converted to guesthouses, cafes, museums and shops to cater to the need of tourists and visitors. It was comforting to see flooded rice fields with seedlings planted in them. It kind of assure us that we were still experiencing an authentic village and not a “commercialised” village for tourists. 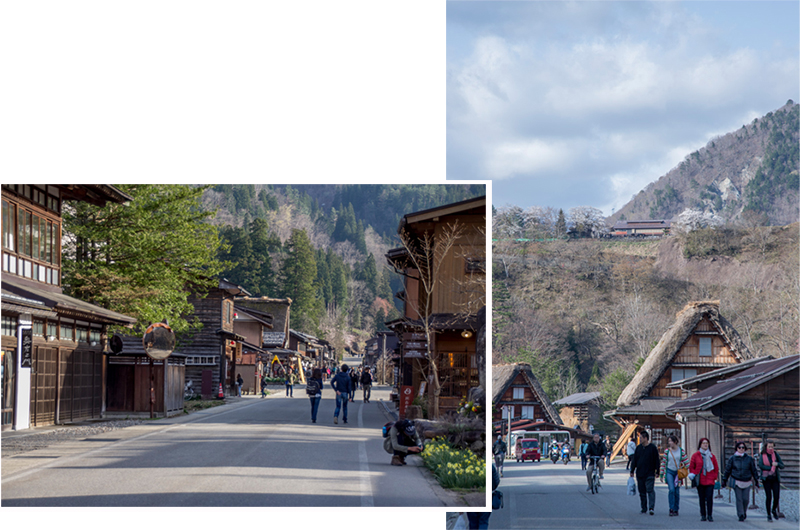 The meaning of Gassho meant “two hands coming together” in a prayer ritual. These historic houses were called Gassho Houses or Gassho-style houses because their steep roofs resembled the shape of two palms placed together in a prayer style. The needs for such steep roofs in this area was due to the heavy snow fall during winter, the sharp inclination allowed the snow to slip easier down the roofs. 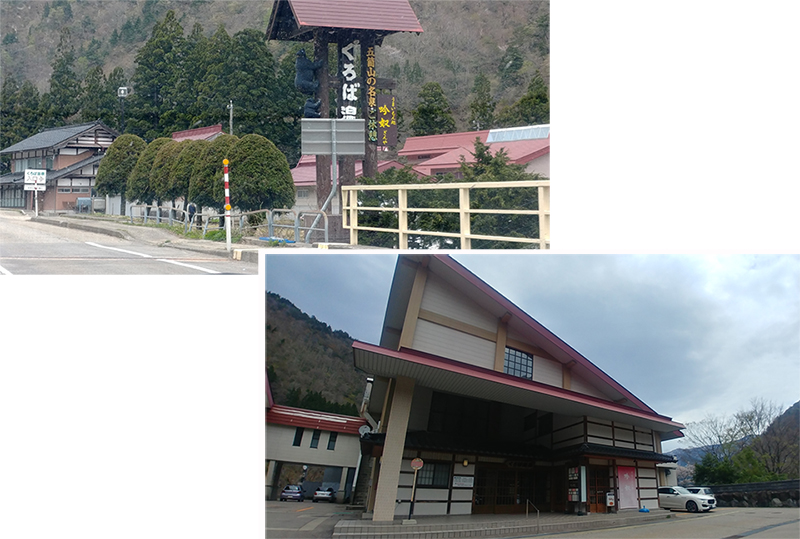 The restaurant on the second level. Our dinner came up to ¥3550 which was for three sets of meal and one tofu dish. There was no charge for “seat”. Though the individual meal was pricier than some of the places in Kyoto the total cost was lesser due to no “seat” charges. 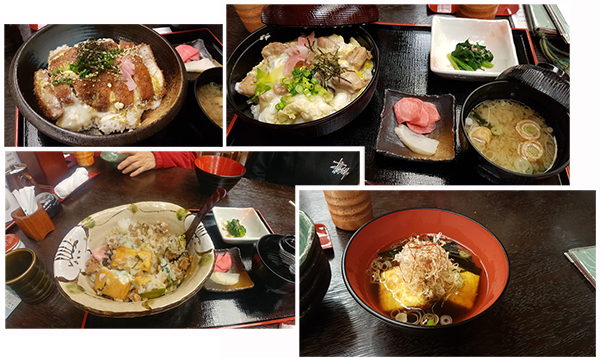 Our delicious meals at Kuroba Hotspring

Guest House Yamashita-YA was a last minute reservation made on booking.com a couple of days after we rerouted our itinerary. On this trip I made many cancellation and rebooking of our hotel reservations so as to maximise both cherry blossom sights and unique sights for Lin Ying and mum as it was their first time visiting Japan. Luckily all the cancel reservations did not have a penalty charge. 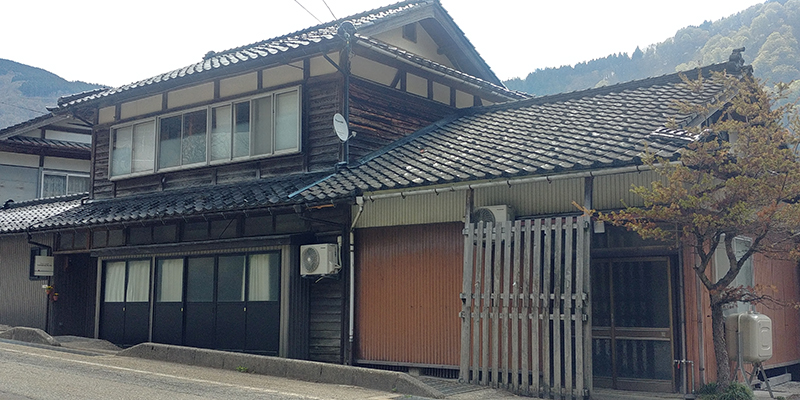 This guesthouse was in Gokayama, sited in between three famous Gassho Historic Villages (Ogimachi, Suganuma and Ainokura). We thought it was in an ideal location for us to visit at least two of these villages. 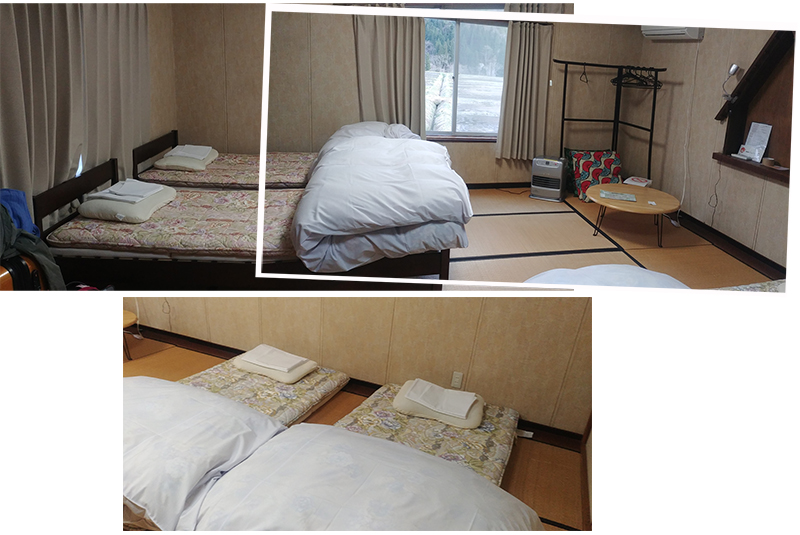 Our family room at Guest House Yamashita YA

Guest House Yamashita YA was a small guesthouse, it had one big family room and two dormitories (mixed and female) with bunk beds. On the day that we checked in there was no other guest but us four so we got the whole place to ourselves.

This guesthouse was a refurbished traditional house, there was a mixture of modern and traditional living coming together. The toilet and shower facilities were all new and spotlessly clean. 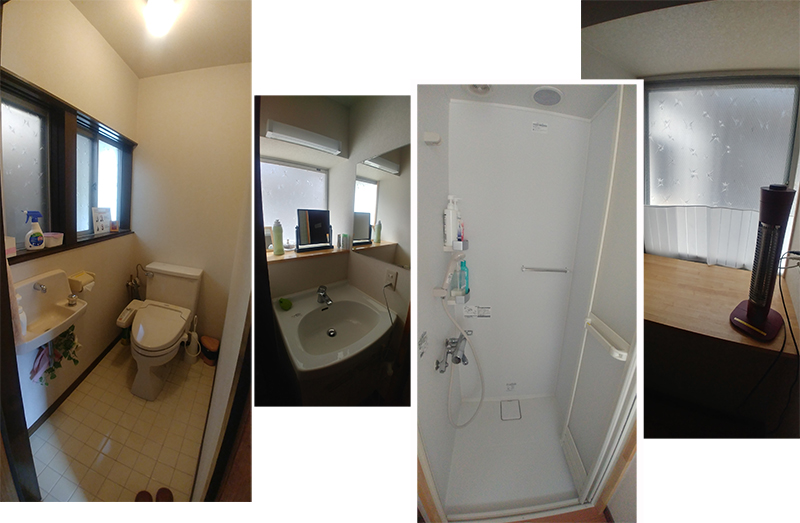