For the day we planned to visit Chamonix Town and to go up by cable car to Aiguille du Midi which was at 3842 metre above sea level. By early afternoon we would start our drive to Aosta via the Switzerland route. At Aosta we planned to visit its old town and see some Roman ruins. For the night we would be staying in Pila a small town just a few km from Aosta old town.

By the end of the day
We was not able to go up to Aiguille du Midi as the cable car for the final stretch (3 stretches) was having some technical issues so it was undergoing repair. We went up to another peak, Le Brevent but the cable ride stopped mid level at Plan Plaz (1999 m above sea level), despite of that we had a great time on the snow mountain. In the early afternoon we started our drive to Aosta and passed some very scenic sights in Switzerland. Aosta old town was a nice surprise, it was full of activities and an unexpected high number of tourists thronging the old town.

The evening before when we arrived at our Airbnb stay for the night “Quiet Studio in Chamonix Valley” we were too tired and hungry to appreciate the beauty of its surrounding. After a good night rest we woke up feeling refresh and on stepping out of our “studio” we were captivated by the green, blue and white surrounding landscape. Too bad we had to leave soon, it would be nice if we could stay for one more day and explore the hills and the surrounding…sigh… 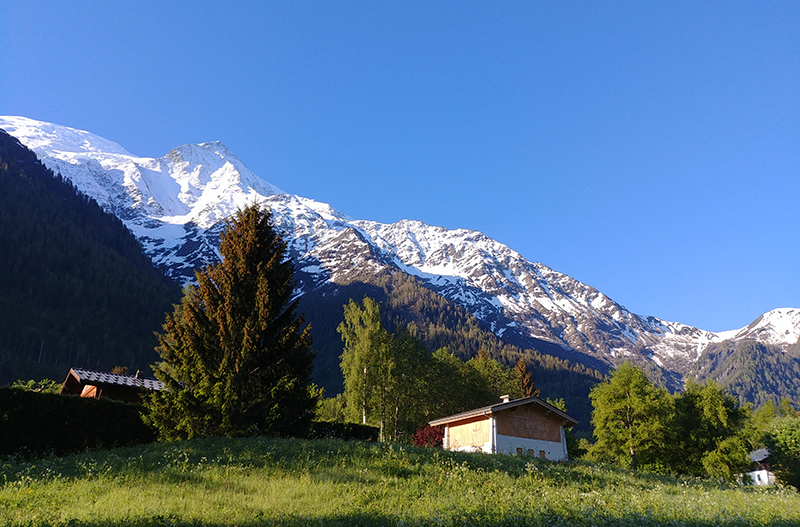 From Les Houches we reached the road turnoff into Chamonix town in less than 10 min and drove into town. It was early so we looped around the town center in search of free parking. We understood that free parking lots would be indicated by white lines drawn on the road. Unfortunately it was not easy to find them. Most white lined carpark lots had this “private” or “resident” signs. In the end we drove into a “paid” parking carpark. Based on whatever we could interpret regarding the charges on the payment machine, it seemed to state that the parking fee was €1 an hour.

Parking around town center at Chamonix

From the carpark we walked a short distance toward McDonalds for breakfast. Unfortunately unlike the McDonalds back home that opened very early in the morning, the McDonalds at Chamonix town started operation at 9.30 am. It would be an hour wait, too long to loiter especially when all the shops around were still closed. The only restaurant that was opened was  “Bar and Bristo” of Pointe Isabelle hotel. It was offering buffet breakfast at €16 per person, a bit on the pricey for us because Yat Thong and I were small eaters and liked to start our day with a light meal. But since no other eateries were opened for business we had no alternatives but to go in for our first “expensive” breakfast for this trip. 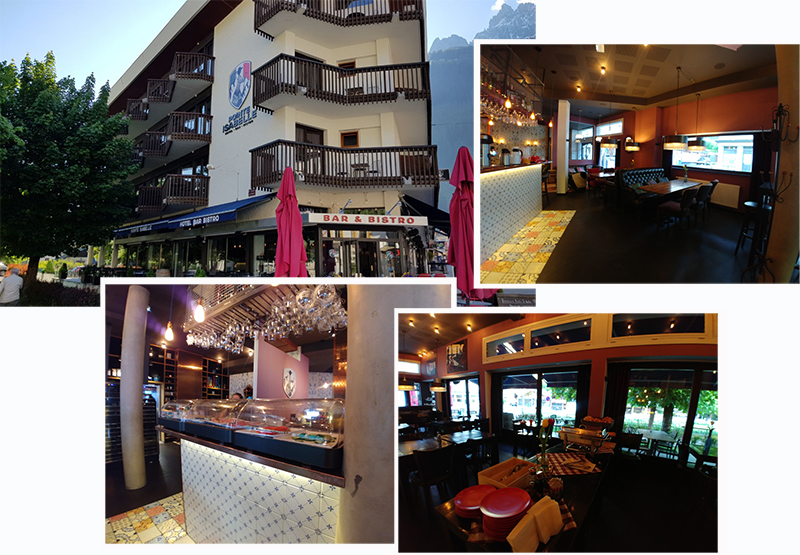 Bar and Bristo of Pointe Isabelle 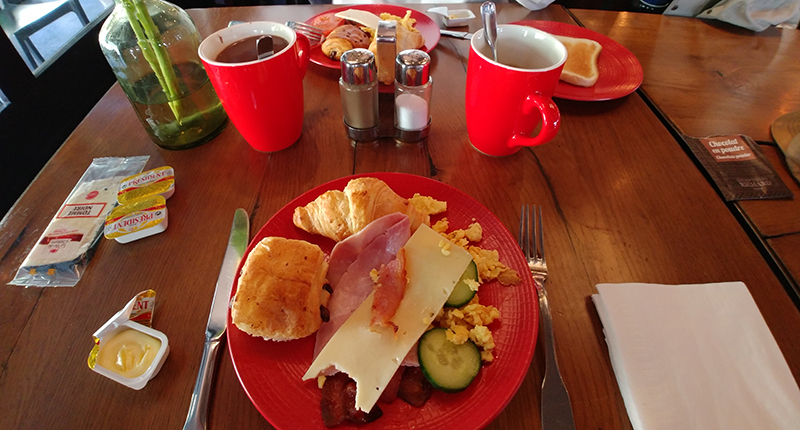 An hour later after breakfast we were back at the carpark and when we inserted our ticket into the payment machine we were surprised to see that the charge was zero. Apparently if the parking was less than an hour there was no charge. 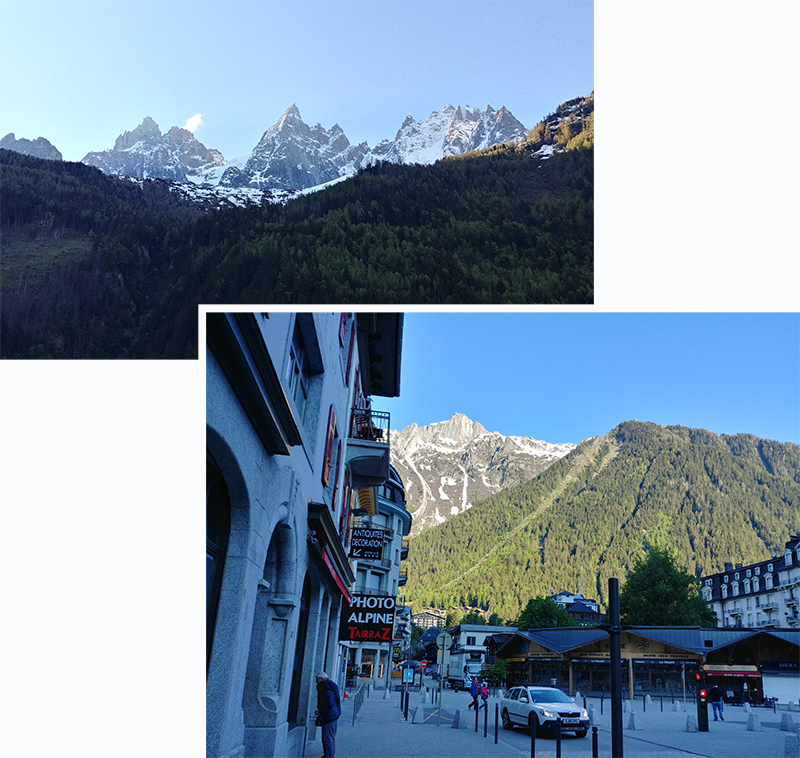 From Pointe Isabelle to the cable ground station was just a short drive of less than a kilometer. The roads were mainly one way so we looped around the vicinity of the cable car station searching for free parking. We found a vacant piece of land where there were already several cars parking there. There was no parking lines on the vacant land and no parking sign which would mean “free parking”. We parked our car and walked a short distance to the cable car ground station.

L’Aiguille Du Midi Ground cable car station was large building and interesting there were not many visitors. We read that Aiguille Du Midi was a very popular summit and the queue to go up could get quite long. At the ticketing counter we requested for two €61 tickets to go up to Aiguille Du Midi (3842 m altitude) and was told that the cable car systems for the upper stretch of the ascent was out of operation> There were some technical issues and the repairs would take at least a week. What a disappointment, we had been all ready to experience “Step into the Void”, a glass cube jugging out into the air at 3842 meters! Now we knew the reasons why there was no long queue!

On the advise of the ticketing staff we moved on to another nearby cable car ground station to take a  ride up to Le Brevent where we would be able to enjoy a panoramic view. 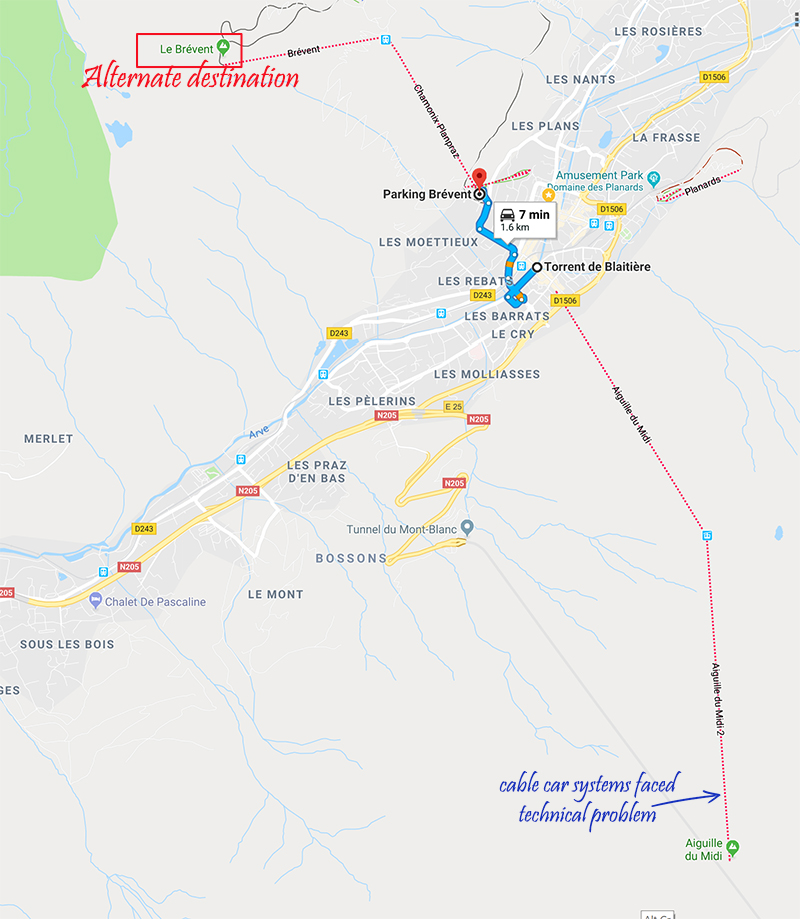 Instead of Aiguille Du Midi we went up Le Brevent

The drive to Le Brevent cable car ground station was less than 10 minutes. It had a huge free car park. At the ticketing booth we got our cable tickets at €18 per person. There was not many visitors around and we got the entire cable car to ourselves. 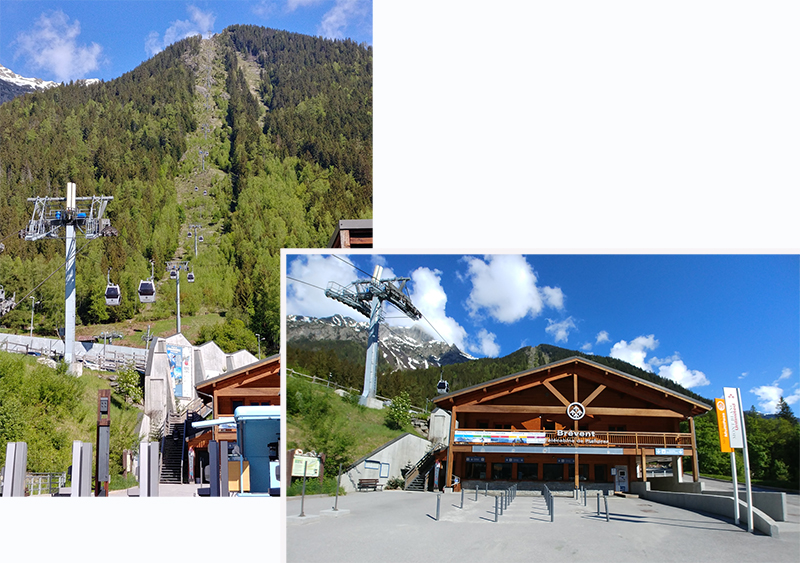 As we ascent up the mountain we saw a walking trail “zigzaging” up the slope directly below the cable car line. There were many hikers on their way up the mountain. 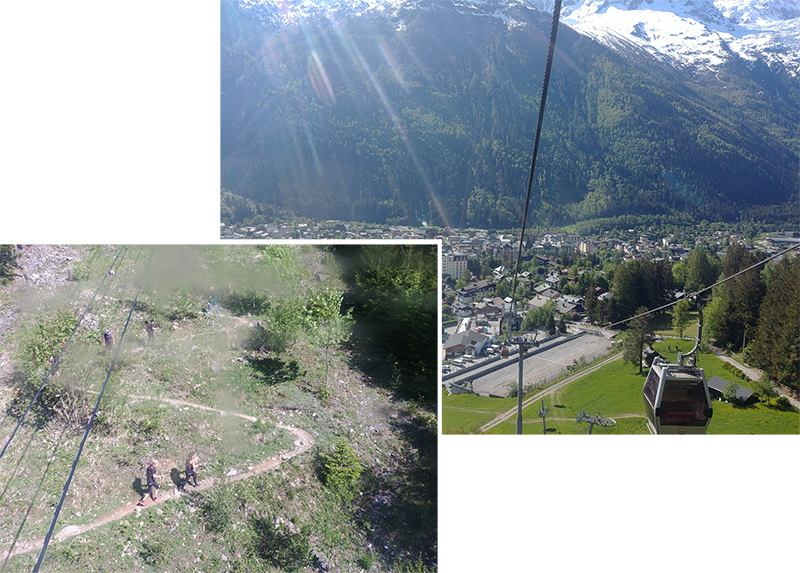 Hikers going up to Le Brevent

The earlier stretch of ascent was not very steep but the second half was highly inclined and looking down to the ground we could no longer see the “zigzag” walking path, it probably went in another direction up a gentler slope.

At the upper station we exited and found ourselves in a magical white wonderland. The cable car had stop at Planpraz (1999 m) and the next set of cable ride from Planpraz to Le Brevent (2525 m) was not in operation. I had no idea if it was under repair or it was not in operation at this time of the year. 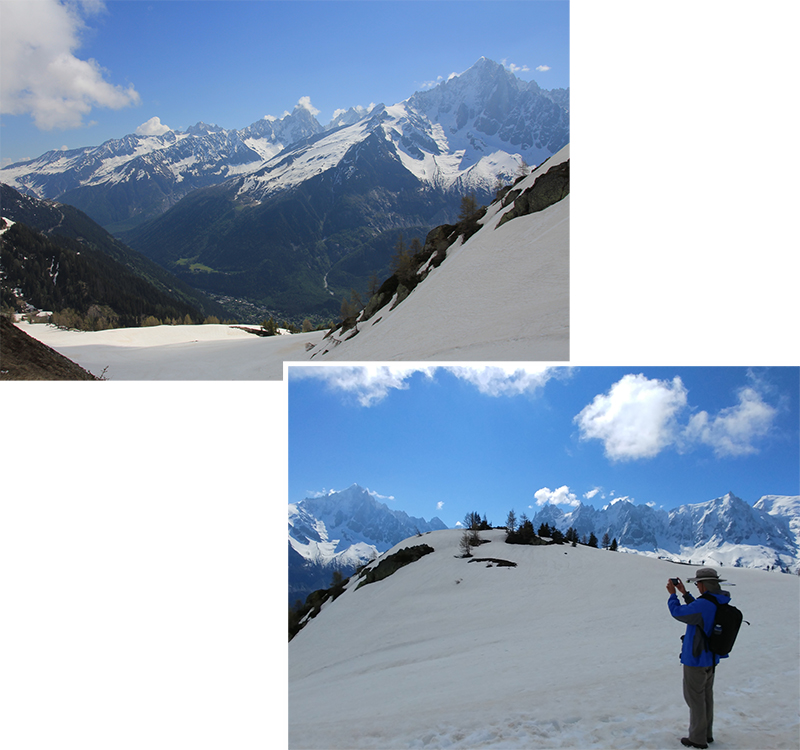 The whole place was a blanket of white and blue. There was no blizzard, no snowing or strong wind. It was serene, peaceful and pleasantly chilly. There were several lookout points and  a restaurant (also not in operation). To our delight we saw many paragliders laying out their parachutes getting ready to “fly” as the weather seemed to be ideal for paragliding. 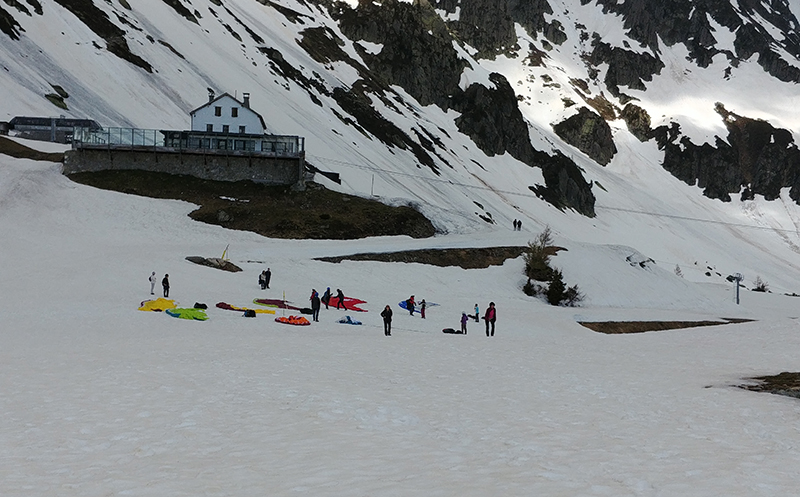 Ideal weather for paragliding at Plan Praz of Mt Brevent

The sport seemed so easy, so fun and so relaxing.  We were fascinated to see one paraglider after another taking off from the slope. They run down a slope and “flew” into air so gracefully and so easily. Once they were in the air they maneuvered their bodies into a sitting position, lying slightly backward as they guided their parachutes smoothly through the air.  We could hear the instructor giving them instructions from the ground using some “walkie talkie systems” and everyone of them took off successfully.

We decided to take a longer route from Chamonix to Aosta and not to use a shorter route going through a tunnel that linked France to Italy, this tunnel link would cut short our journey by about 60 minutes and there was a toll charges of about €44.5. Since we were not in the hurry to get to Aosta, we took the longer route which routed through Switzerland. The drive brought us through Liddes and we were very enchanted by the lovely scenery all around us. It reminded me of the scene in “Sound of Music”. 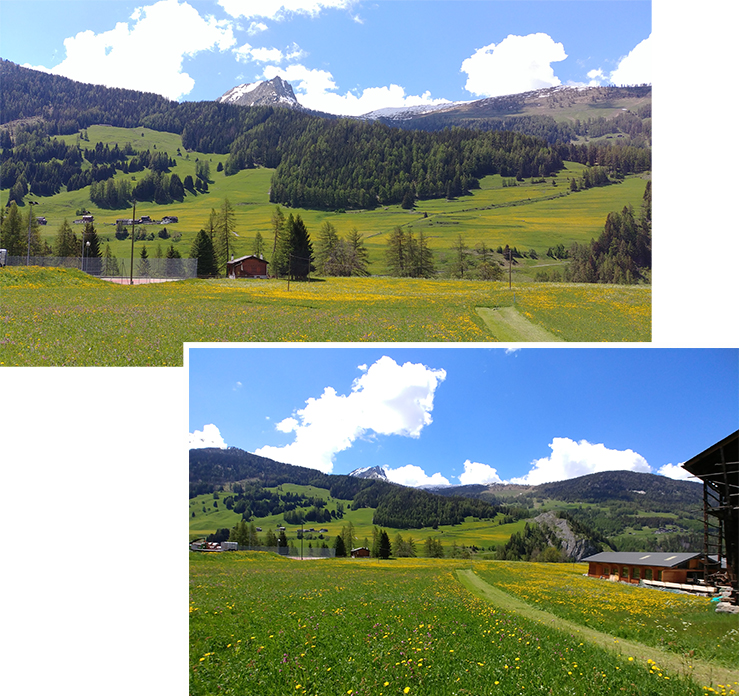 We made a mistake just when we were about to reach St Bernard, instead of turning left into St Bernand town we ended up driving into “Great St Bernard Pass”. It was too late to turn out and driving forward we had to pay a toll charges of CHF 31.25 (€27) to the attendant at the ticketing booth. We were so engrossed with all the beautiful sights around us that we missed the GPS instruction to exit. The pass was sort of a downward straight tunnel which cut out all the gorgeous scenery all around!

We arrived in Aosta at about 4 pm and went directly to our hotel for the night. It was located about 7 km from the town center on a hill. After checking in and a short rest we were all ready to visit Aosta old town.  The old town center was off limit to traffic and the closest carpark was at Piazze Plouves as according to the host of our hotel. 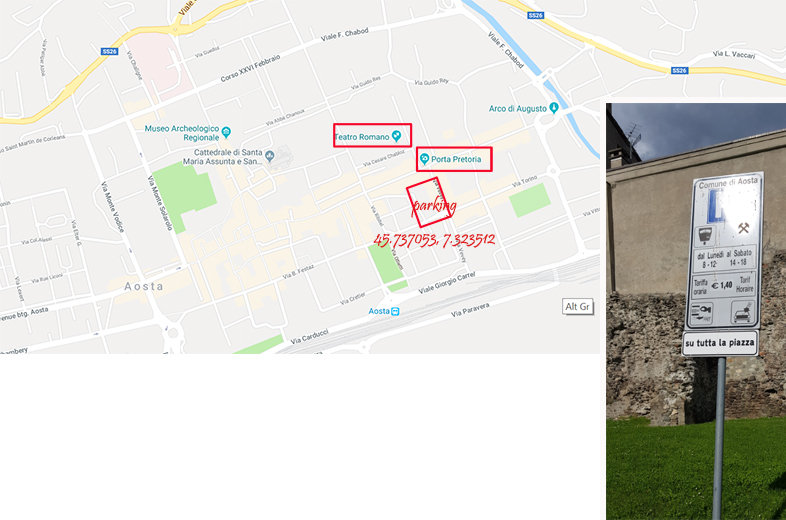 It was closed to 5 pm so we needed to purchase a parking ticket for just an hour from a ticketing machine and displace it on the driver’s side windscreen area. Parking after 6 pm was free. All this parking information we got it from the parking sign in the parking area. 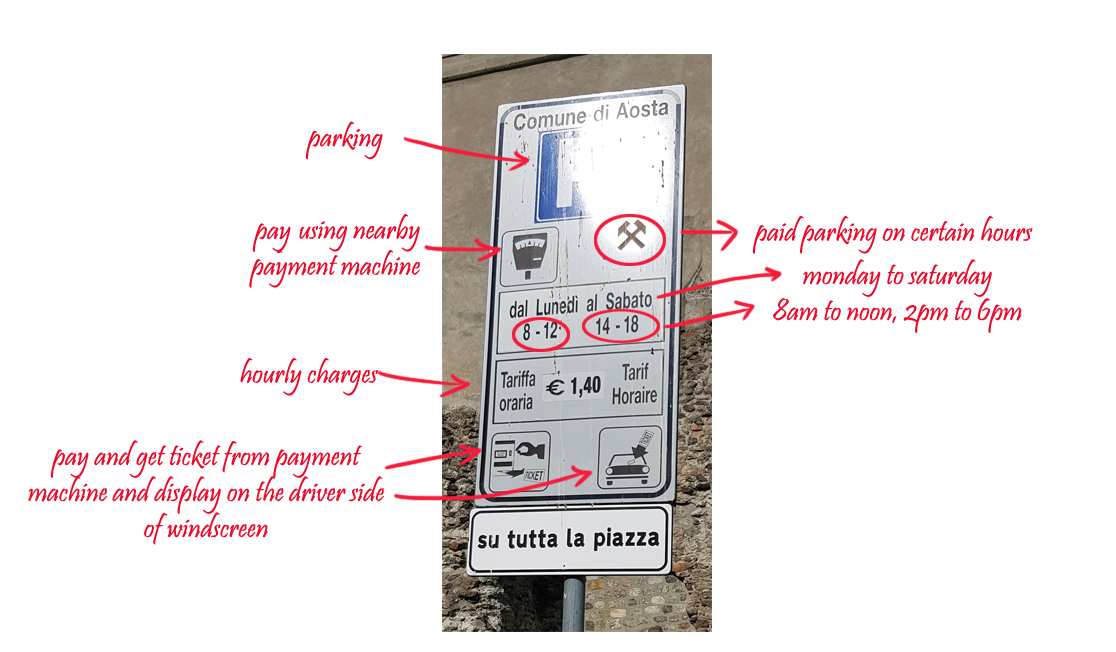 Aosta old town was surprising crowded with tourists. From the carpark it was less than 80 m walk to Porta Pretoria (stone gateway) of the Roman city of Augusta Praetoria Salassorum known as Aosta today. On both sides of the arch gateway were pedestrial streets filled with shops, eateries, cafes, art and local crafts shops. 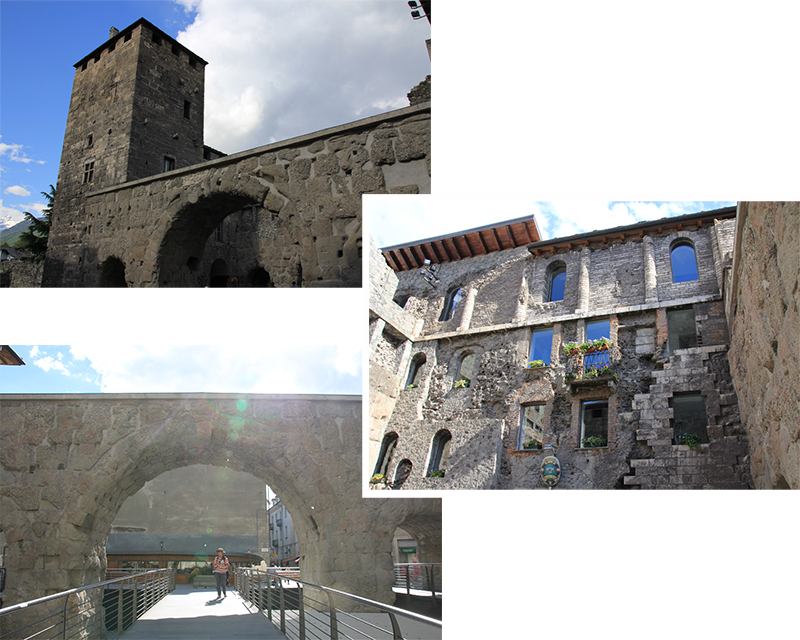 Nearby was the ruin of a roman theatre. All that was left was a old thick stone wall with several layers of arches. The entrance fee was €5 per person. As it was near closing time we decided not to enter the gated compound of the roman theater ruins but to view it from the outside. 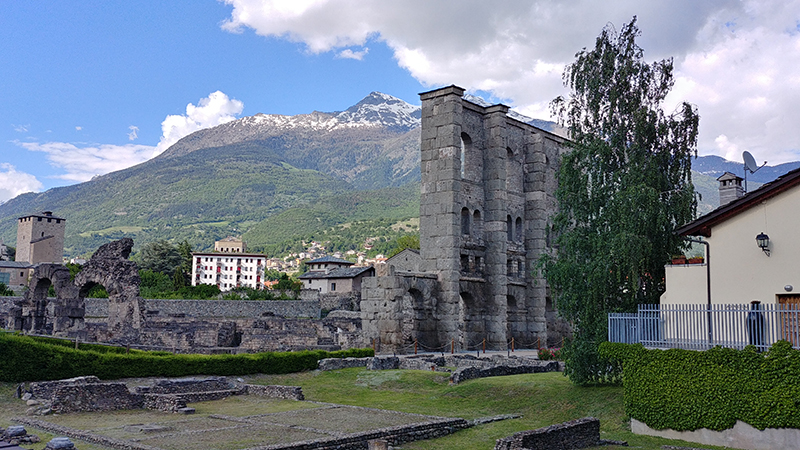 The pedestrian walk was about a kilometre long and we walked its entire length twice peeping into shops and studying the menus placed outside the restaurants to keep a look out for a good dinner place to return to. 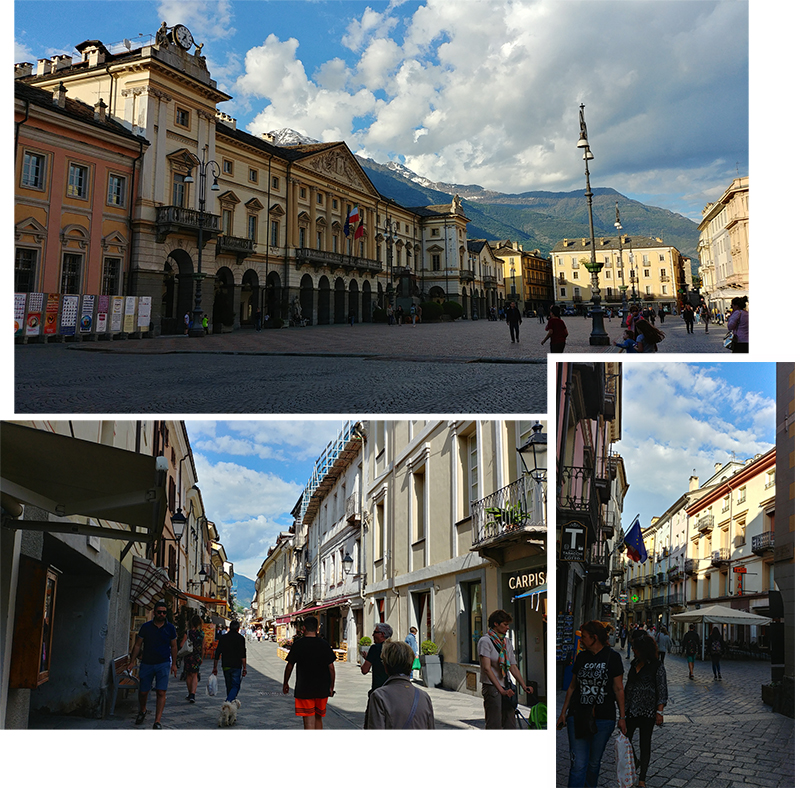 One particular shop captured our attention, it was a store filled with beautiful angelic figurines. Unfortunately it was closed so we could only admire the figurines through the window display. I wondered were these figurines local craft or imported from “China”. 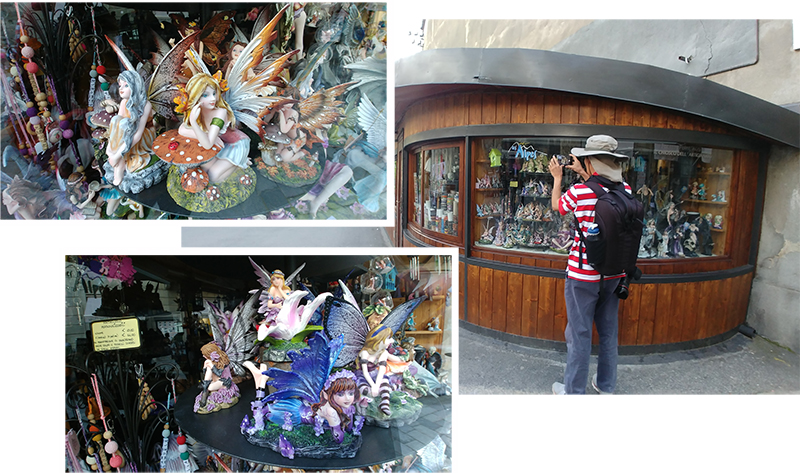 We had our dinner at Otium a pizza and pub joint. It was not along the main pedestrian street but at a side lane just before Porta Pretoria. We sat in its outdoor area and ordered a ham + egg pizza and two cups of cafe latte. We were very excited about our very first pizza in Italy as we had heard so much about how the pizza was so much more cheesier than those back home. The pizza arrived and we readily dug into it. 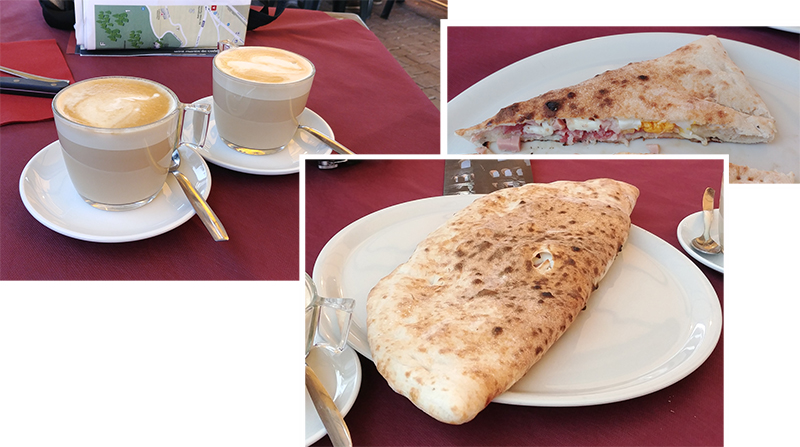 The cafe latte was good, the pizza tasted fine unfortunately it did not have the oozing cheese that we expected. In fact the cheese taste (mozzarella) was rather mild.

Our Hotel for the night

Our hotel “Chambres d’Hotes La Moraine Enchantee” was reserved on booking.com. It was a new hotel of about two month old as according to its owner. It was not a big commercial hotel but a small hotel on top of a hill with beautiful scenery just at its doorstep. 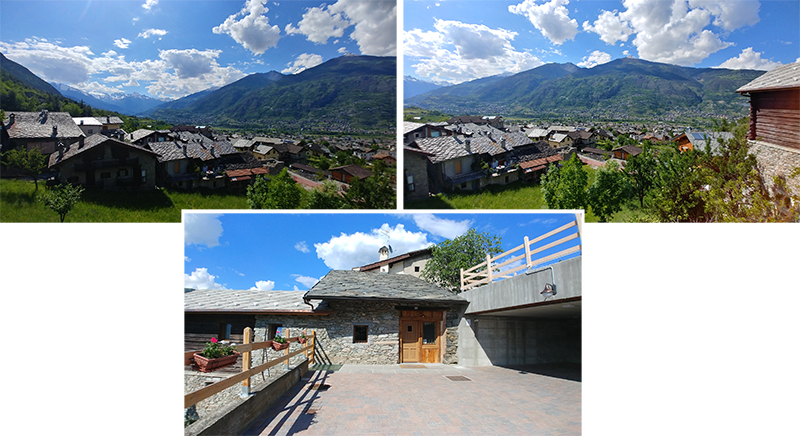 Beautiful scenery just at the door step of the hotel

We got to park our car practically just beside the front door of the hotel which was most convenient for us to bring our bags into the place. The door opened into a quaint cosy dining room with polish wooden floor and wooden beams on the ceiling. 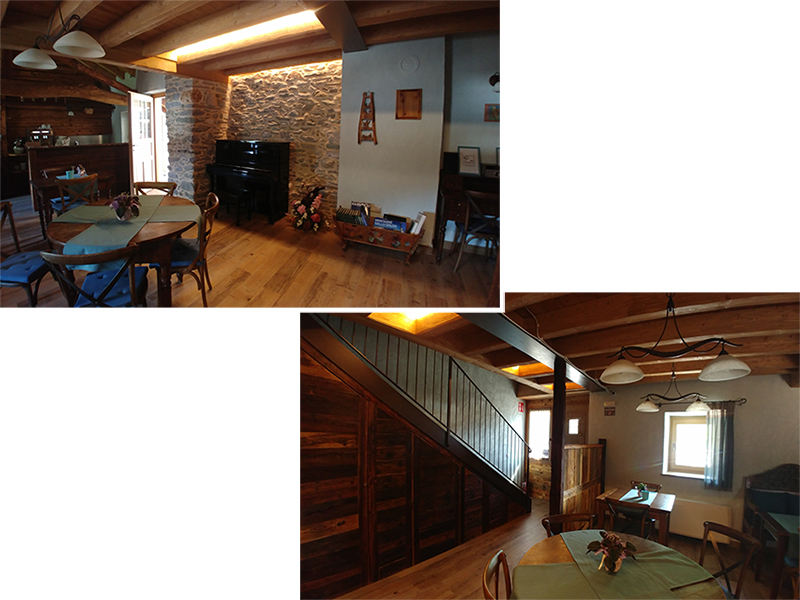 Another door in the dining room led down a couple of steps to a small courtyard and to the door of our room. Our room was cosily decorated and was very comfortable. Everything smelled nice and new.  The entire place was spotlessly clean. 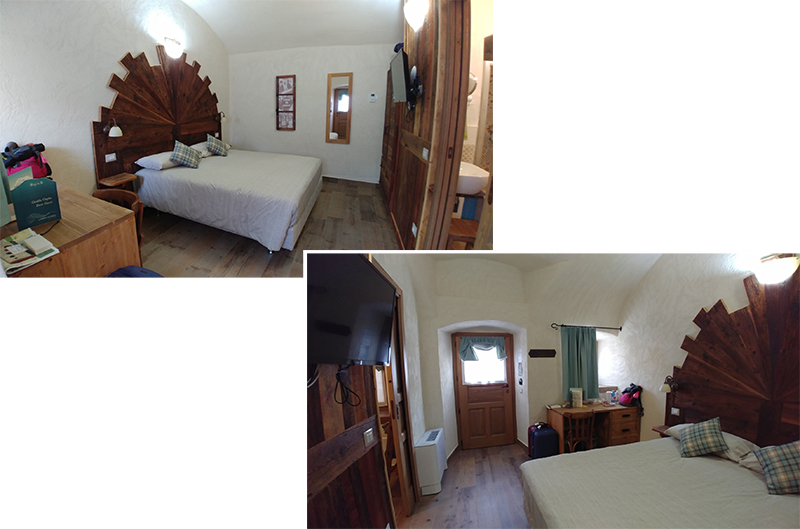 The room had an ensuite toilet and the shower area had two shower heads one of which was the “rainfall” type. I found the toilet chamber very unique with its colorful wall and ceiling mosaic tiles. 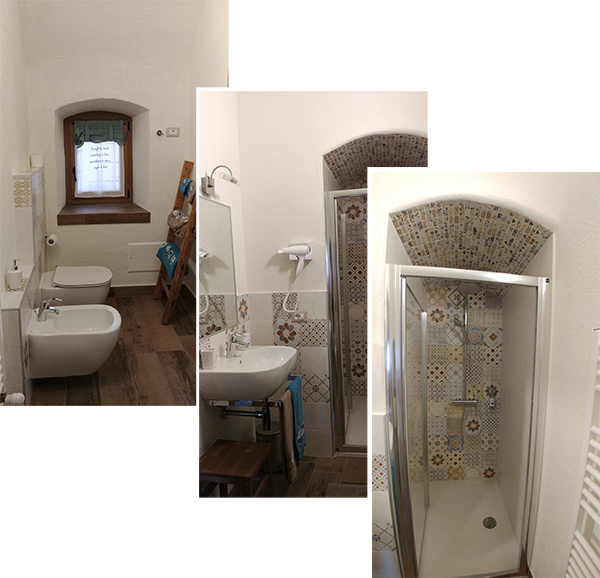 The cost of our room at Aosta – Pila was €51 which included breakfast. It was lovely to stay in such a comfortable and cosy place .