Our plan was to drive to Matera which should take about 3 hours and 15 minutes over a distance of 254 km. Three hours of of driving was a long duration so we would require at least one coffee break to make the journey more bearable. At Matera we had two days to explore the “rock” city.

By the end of the Day

Two nights at Matera was just nice. It allowed sufficient time for us to explore the city comfortably. We were able to explore the city in the daylight and again after the sundown with a good rest in between. The best way to explore Sassi was on foot. The old city was a maze of paths turning left, right and going up and down. It was easy to get lost, but since we had all the time to spare we were in no hurry to find our way back.

Matera (as seen across the gorge)

Two hours after we started our journey from Nido Delgi Dei we took a coffee break at the highway AutoGrill Spa just after Potenza. Two cups of cappucino and two Magnum icecreams came up to about €5. We loved Magnum icecreams and in Italy the same icecream at times costed only a quarter of the price we paid in Singapore. So whenever the price was right we would indulge with one or two sticks of icecream. 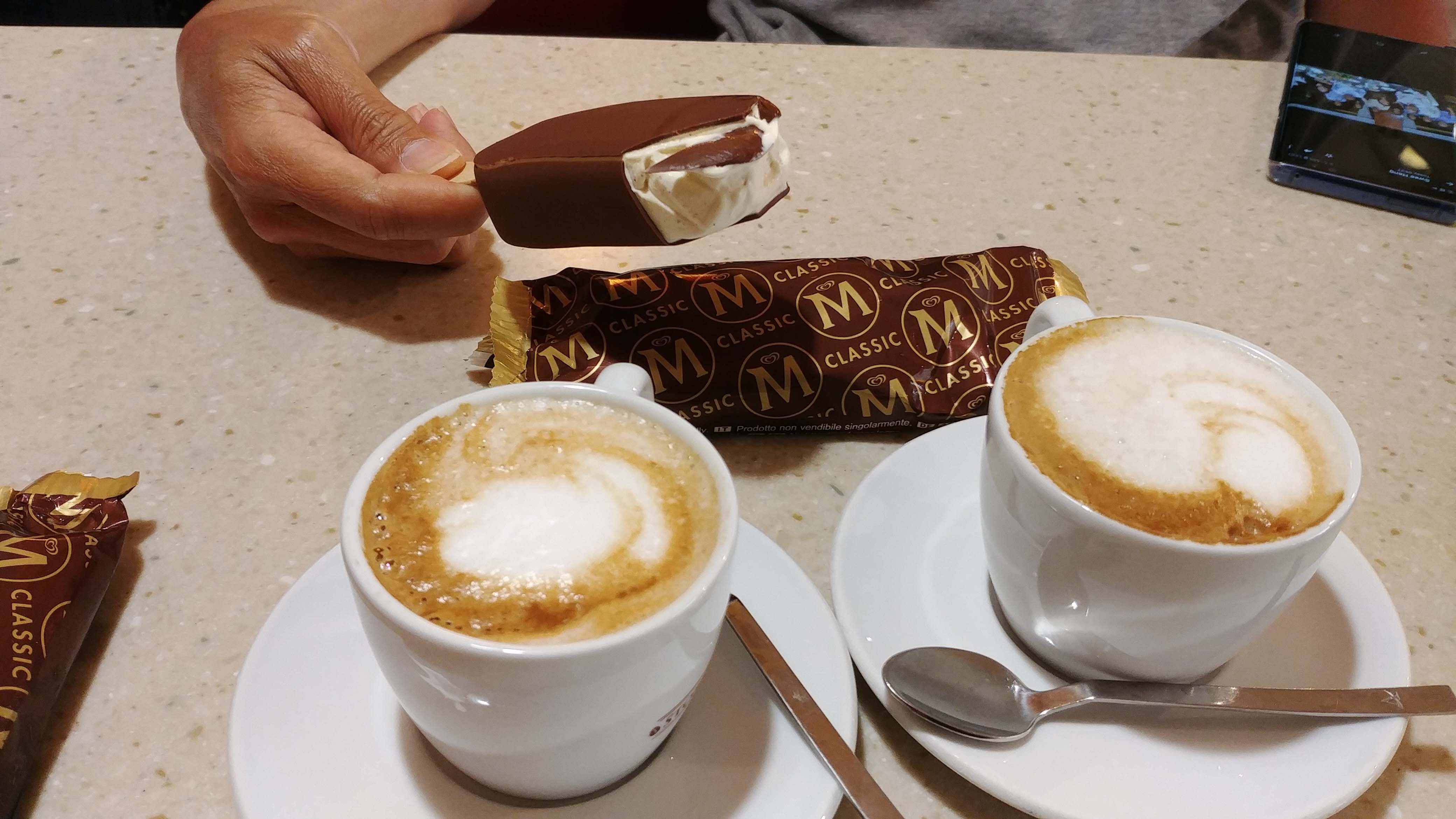 Coffee and icecream at highway Autogrill

After a good break we set off for another 1.5 hour drive to Matera. We did not drive into Matera town but to a valley viewpoint on the outskirt of Matera. The co-ordinates for this viewpoint were 40.664274, 16.617701 and could be reach by driving onto a quiet road that led all to way to a huge carpark. 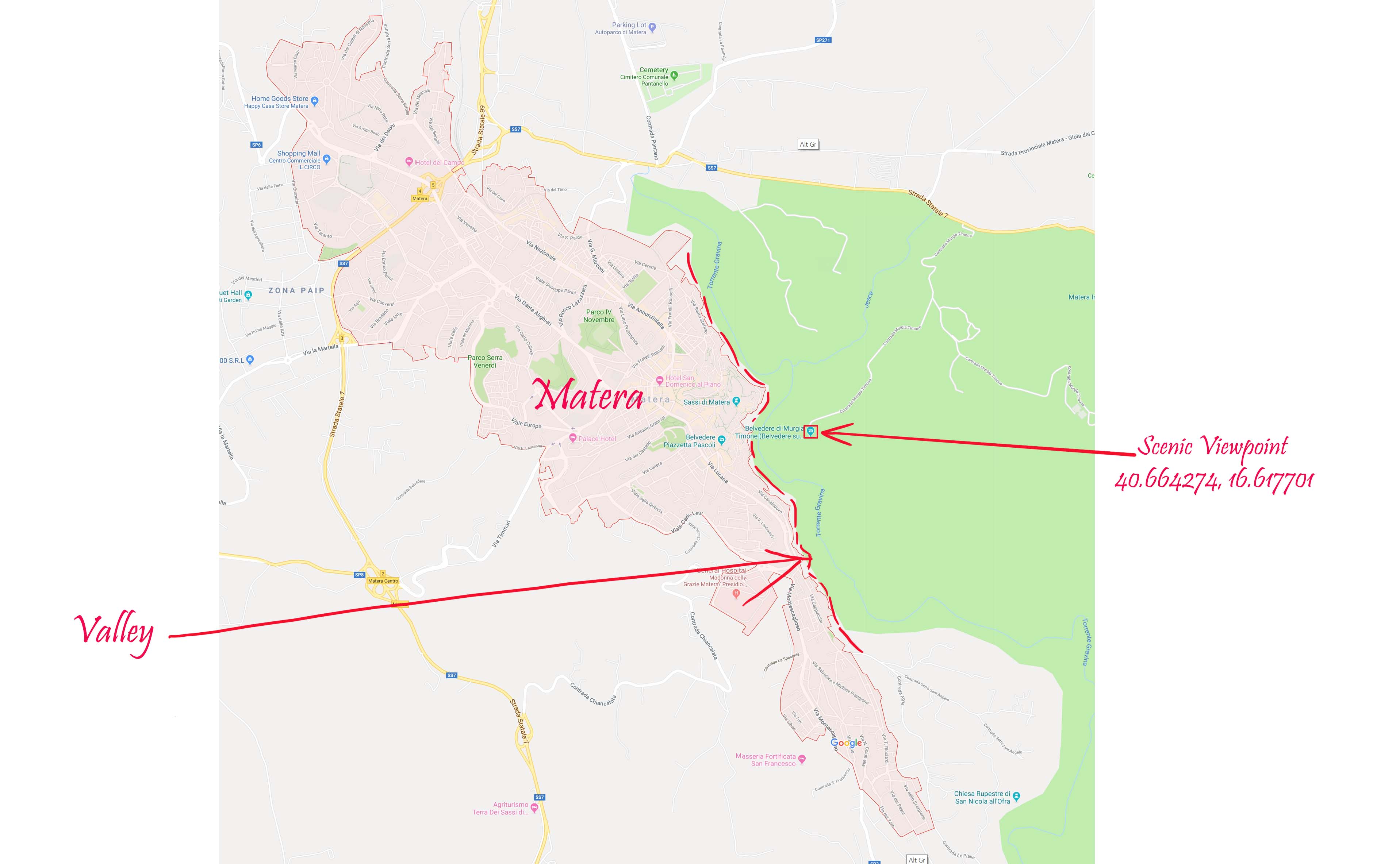 Location of a Matera Scenic Viewpoint

This viewpoint was located across a deep gorge bordering the old town of Matera, Sassi di Matera. The view of Sassi was awesome, we could practically see the entire length of the old town. On the vertical faces of the gorge we saw tiny holes, which were probably windows of dwellings  carved into the rock walls. Above that we saw thousands of “rock” like houses piling one on top of another.

Matera as view from across the gorge

From the carpark we walked down the rough terrain moving carefully towards the drop of the gorge to get a closer look of Matera. We came across several caverns and barricade openings. 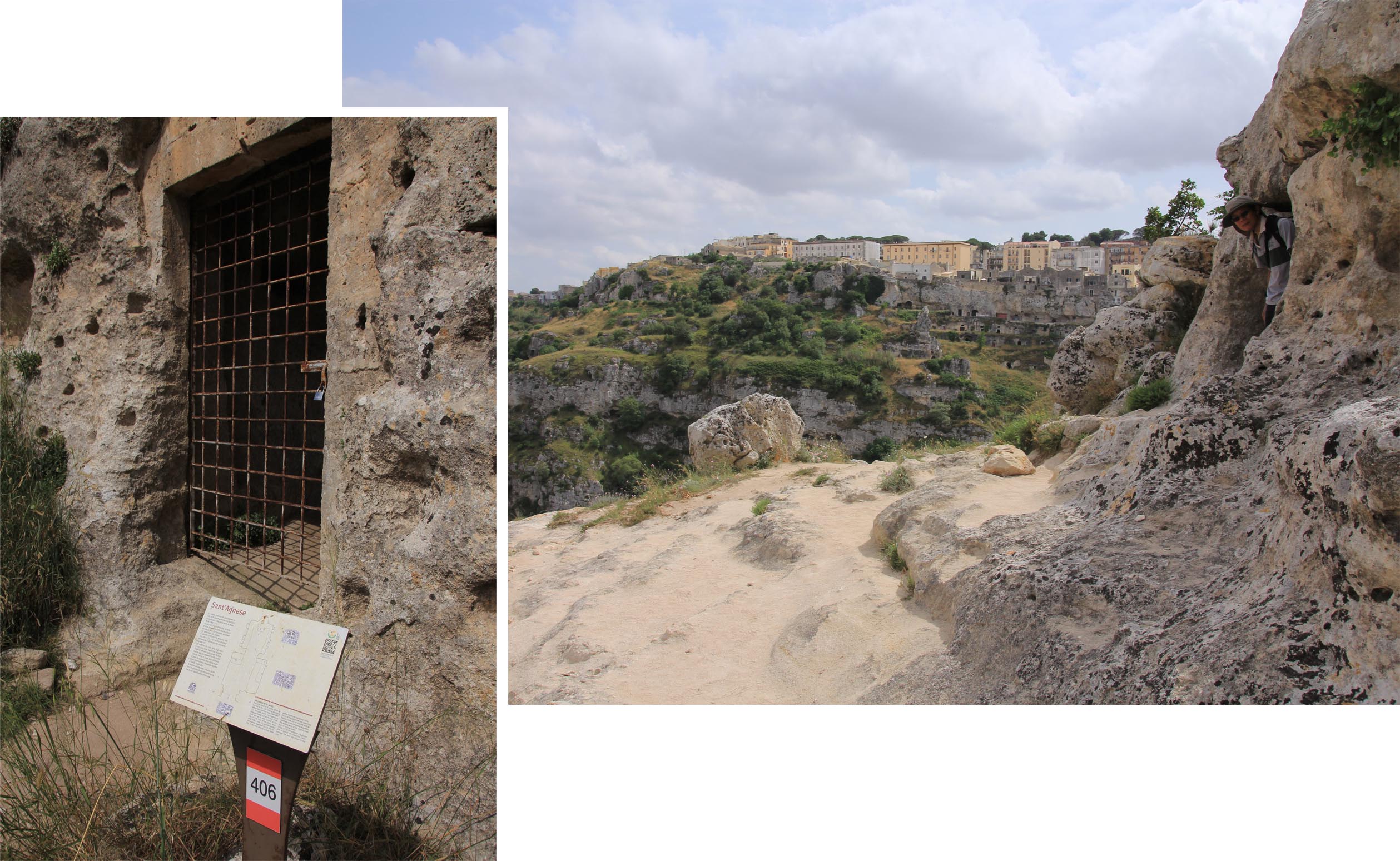 Caverns and opening on the cliff side of the gorge

We saw a rope bridge near the bottom of the gorge connecting the two sides of the gorge. On the opposite side of the gorge we saw a path “zigzag-ing” up the gorge to Matera town. On our side we trekked as far as we could hoping to find a route that led us down to the bridge. We planned to be back at this scenic point when the sun set and was wondering if we could trek back here from the town side. After about 40 minutes of seaching we gave up and decided to come over by car again at sunset. 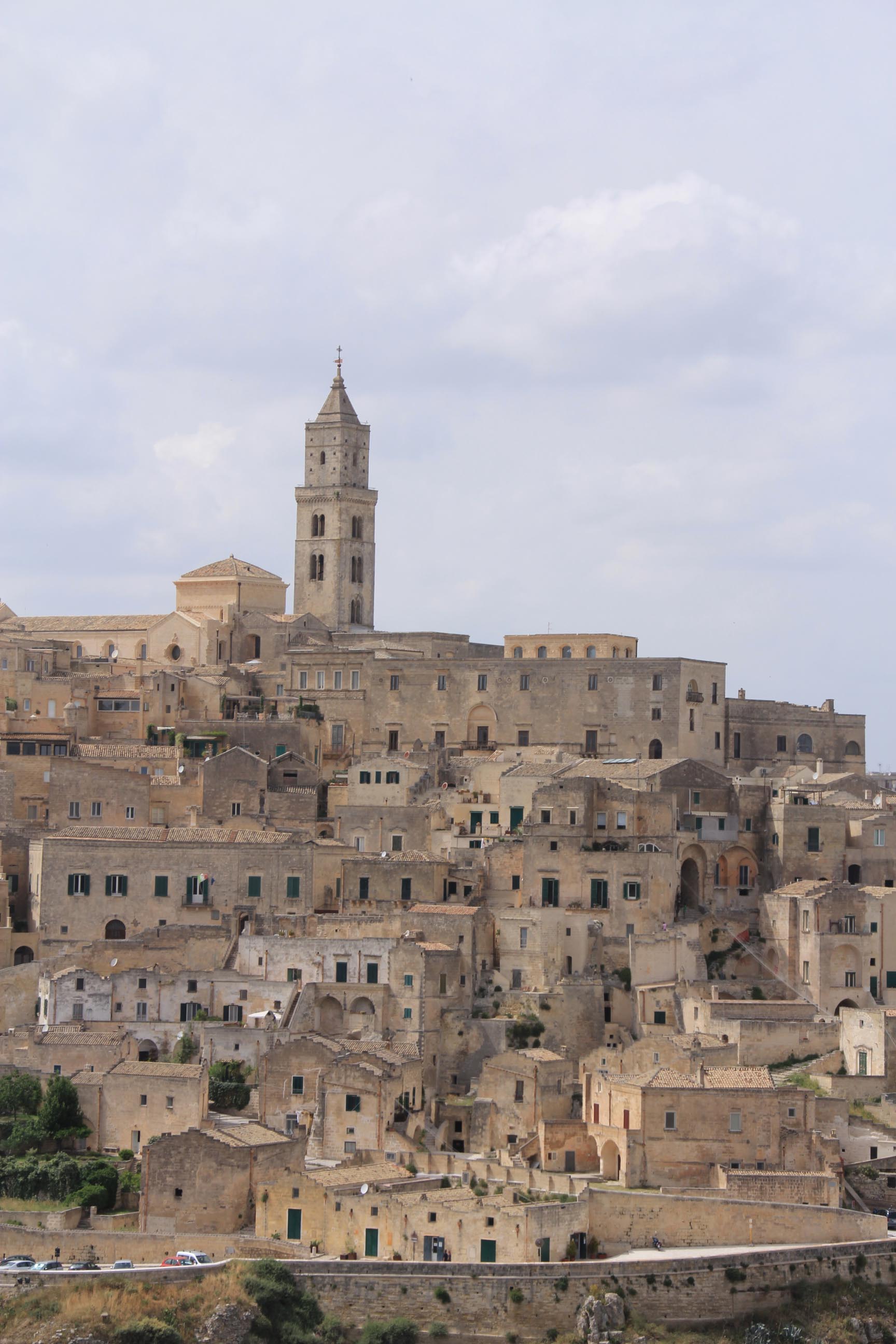 We were back at the scenic view point after dinner at about 8.30 pm. Our hotel was about directly across the viewpoint over the gorge. To get to the viewpoint we had to drive a big loop of about 16 minutes over about 9 km. 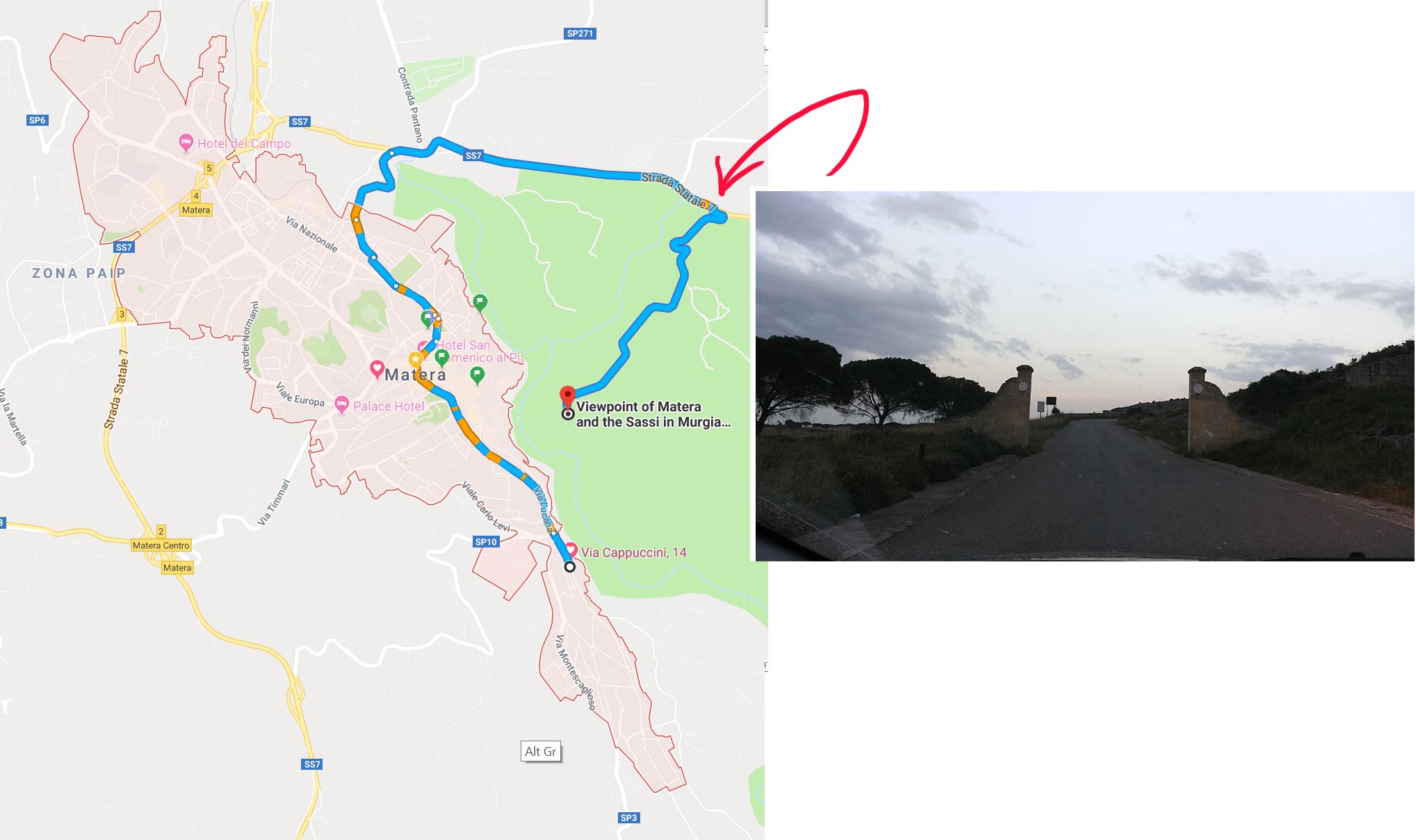 Route from hotel to viewpoint

Since it was a repeated visit, we knew exactly where we were heading and the location where we wanted to be stationed to view the sunset. It was a short distance down a gentle rocky slope from the carpark. Yat Thong took a spot and set up his camera and I took another spot. With my camera set, I just sat back and enjoyed the sunset. The sky darkened and the “golden” lights of the houses  in Sassi Di Matera lighted up. 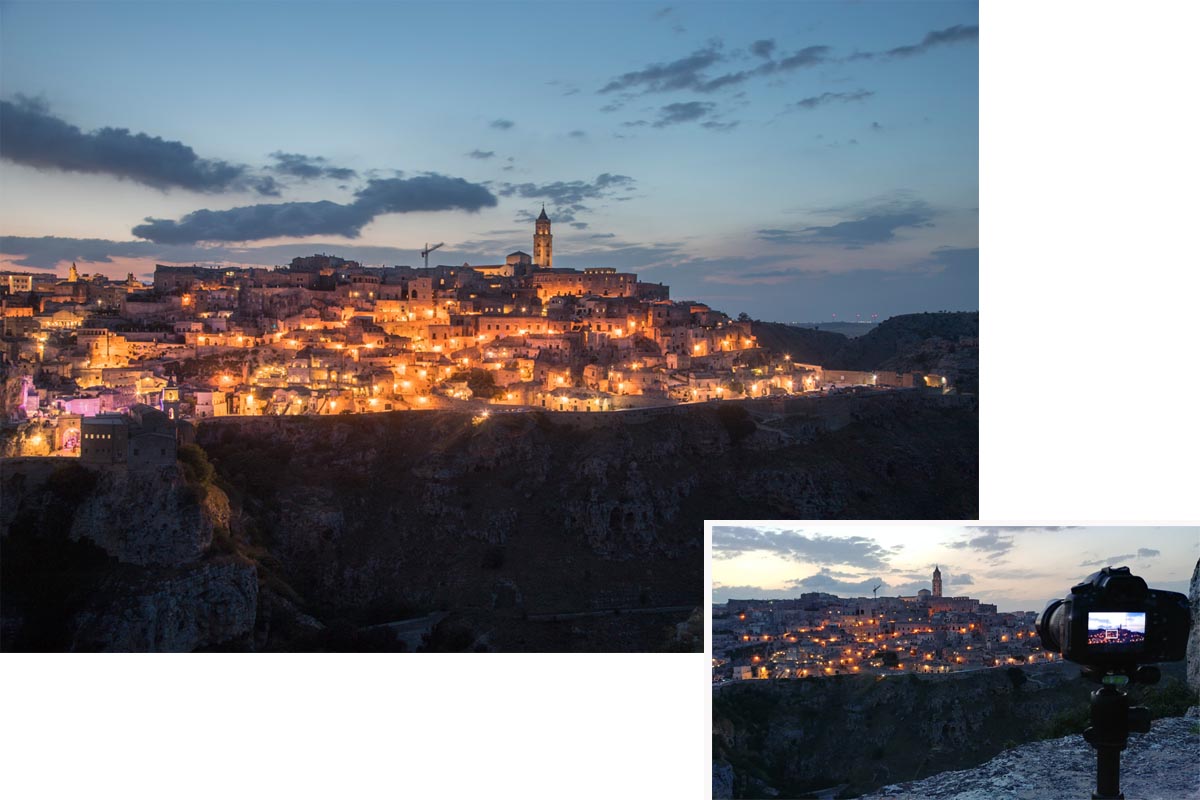 We knew that Matera would look stunning at night, but we did not know it was be so magnificent. This concrete city perching at the edge of the gorge was so uniquely different. Not only did it presented a view to behold in the day its night scene was too beautiful to describe.

Before the sky turned totally black we left. We did not want to negiotate the rough terrain up to the carpark in the dark as there were no street lamps at all.

From our stay it was a short walk to the start of Sassi di Matera, the “old town”, the World Heritage site. Sassi originated from a prehistoric troglodyte settlement and was suspected to be among the first human settlements in Italy. There was evidence that people were living here as early as the year 7000 BC.

We started out from our “stay” at about 10.00 am after a delicious  homecook breakfast. At 10.15 am the sun was already very high in the sky and the weather was pretty hot. We walked for about 800 metres northward towards Sassi and turned left to walk down some rocky path before coming to the edge of the gorge. It led us to a curve where we saw the beautiful “Rock” city ahead. 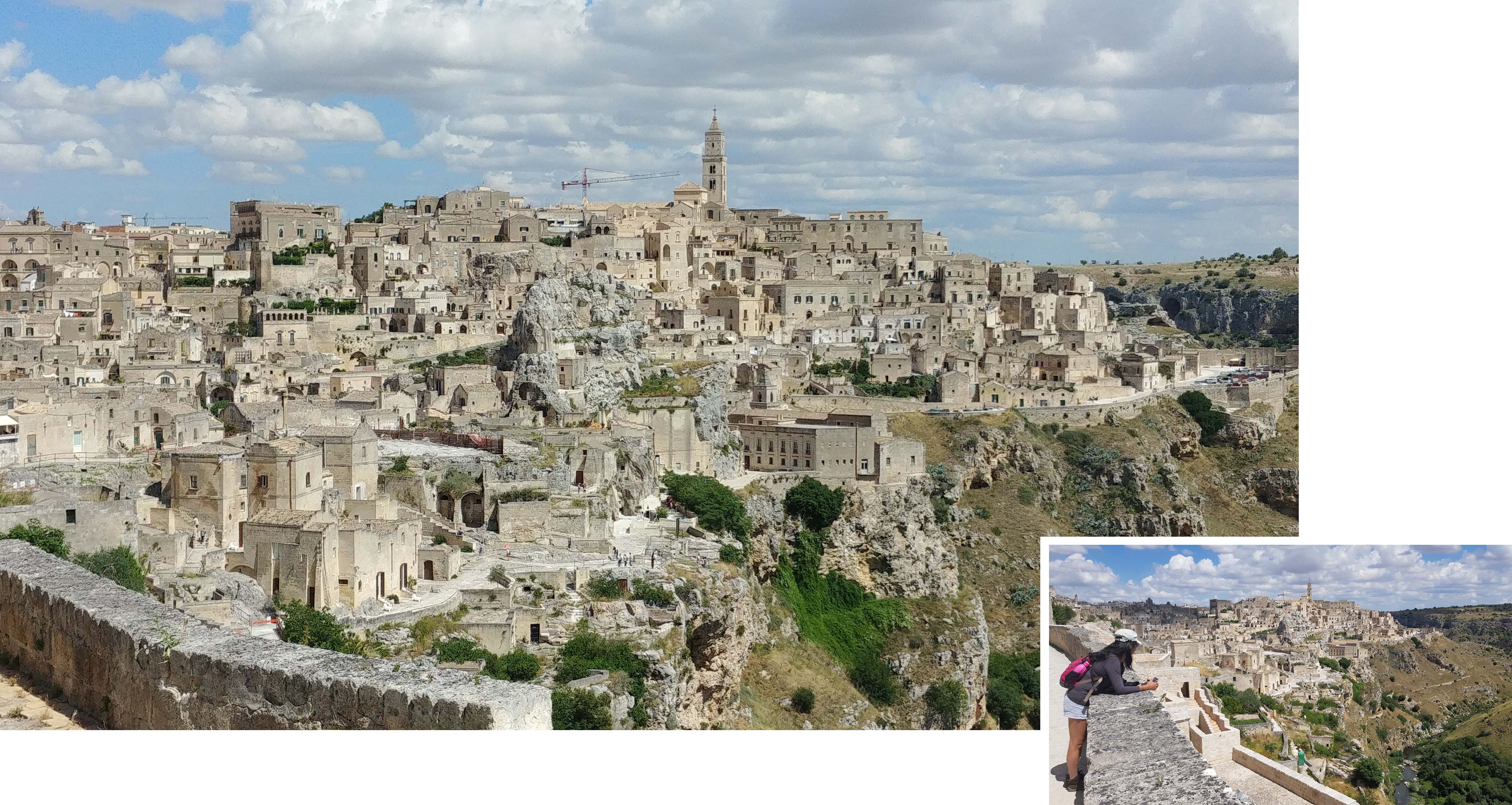 The day before we viewed Matera from across the gorge, from there though its houses appeared so tiny we could see practically the entire length of the city and was overwhelmed by the grandiose of this historic city. Today we explored Sassi di Matera from the same side of the old city which allowed us a nearer and clearer view of the rock houses. We walked through the many lanes of this amazing historic city, moving from one house to another, from one church to another.

We walked from one end of Sassi di Matera to the other end. We visited “tiny” Sassi which was a model of Sassi Matera built by a local artist. To take a photo of the model we would need to make a small donation/contribution into a “fund” box.

From Convent of Saint Agostino we took a slow walk and after 30 minutes we reached our apartment. It was close to 1.30 pm and we had been walking for about three hours. It was getting too hot to explore and we were only too glad to return to our “apartment” for a siesta. We had caught the Italian habit! 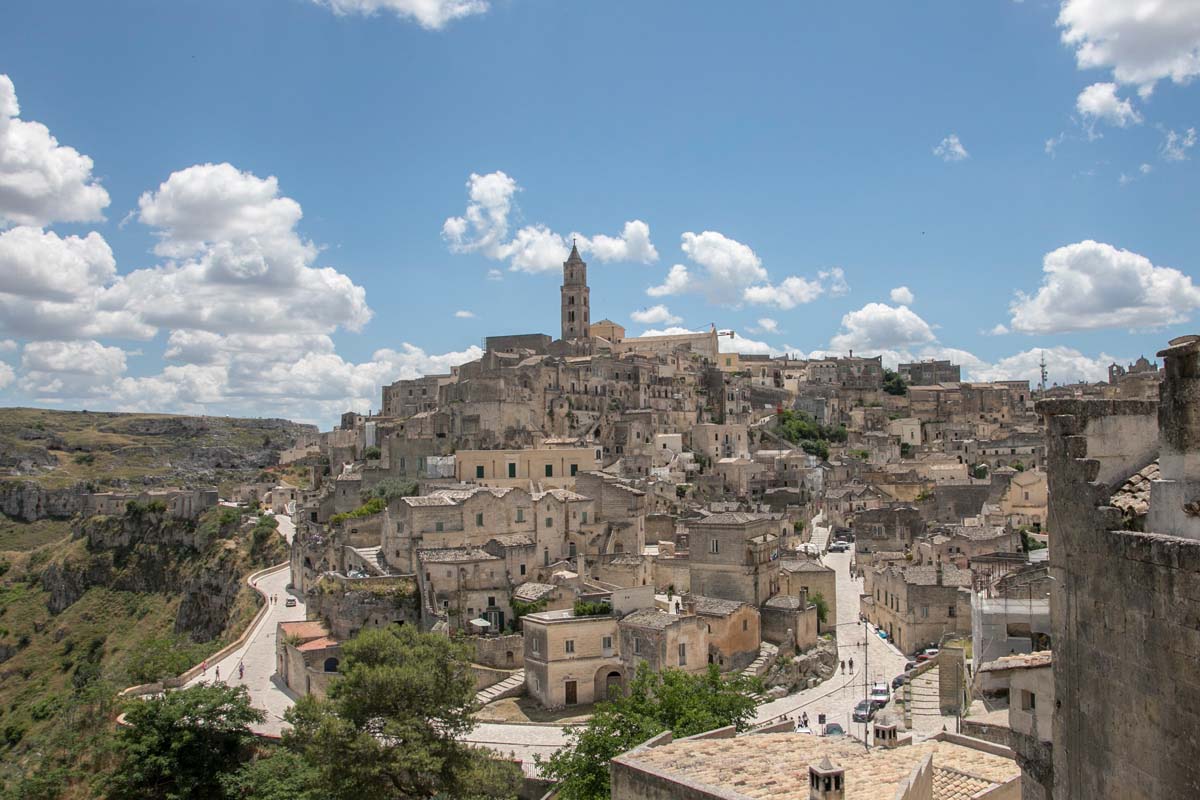 In the evening after dinner we returned to Convent of Saint Agostino, this time we drove. We had identified “Parking Piazza Cesare Firrao” as the nearest parking to get to Convent of Saint Agostino on foot. Unfortunately we had a hard time getting to the carpark as it seemed that some additional no-entry signs had been set up and we just could not get near the carpark. The carpark was outside the “car restricted zone” of the old town and there should be no “no entry” sign on the road leading to the car park. In the end we had to ignore the “no entry” sign to finally get to the carpark. 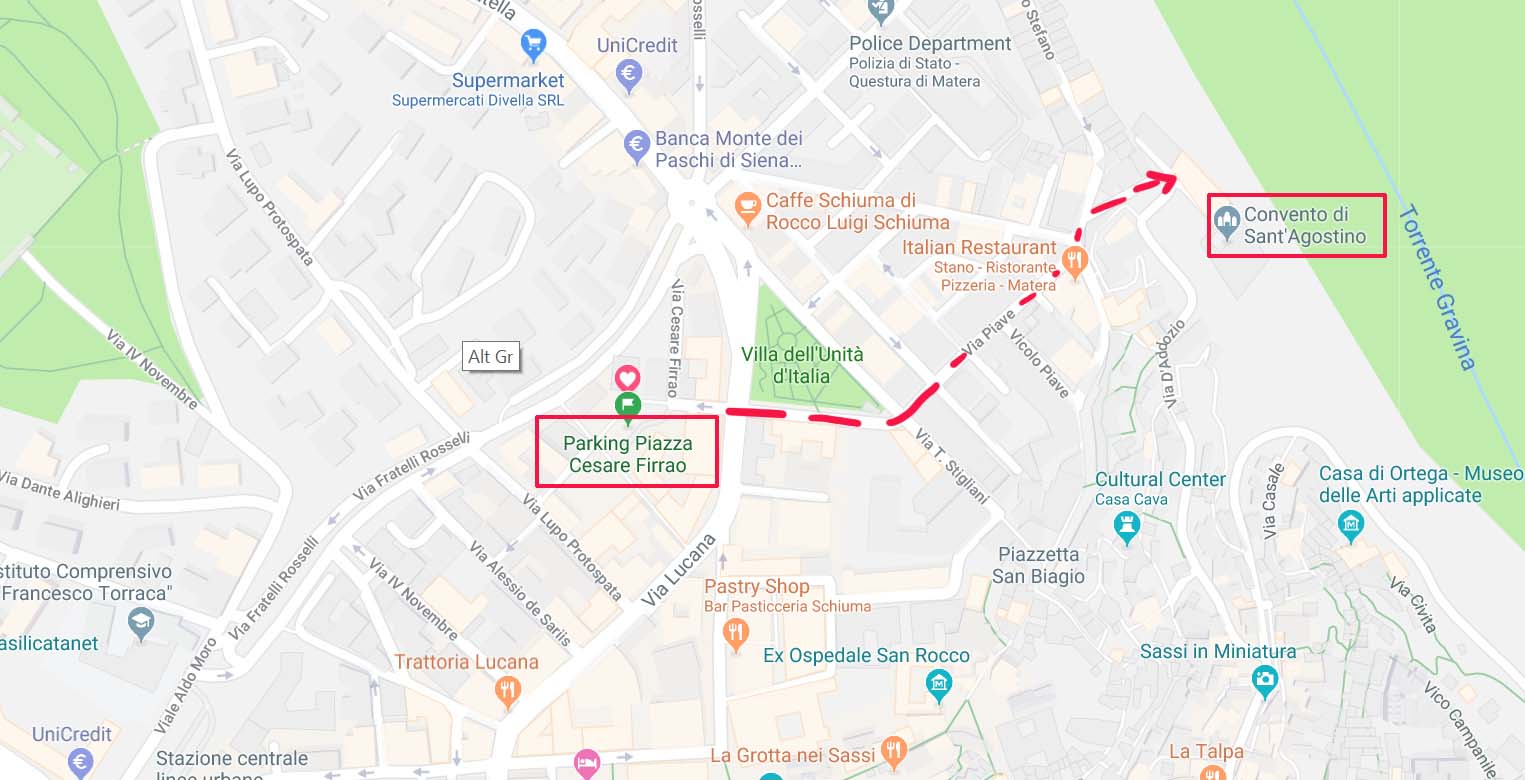 It was a 500 metres walk from the carpark (€1 an hour) to Convent di Saint Augustino. The “rock” city was beautiful as seen from the convent. 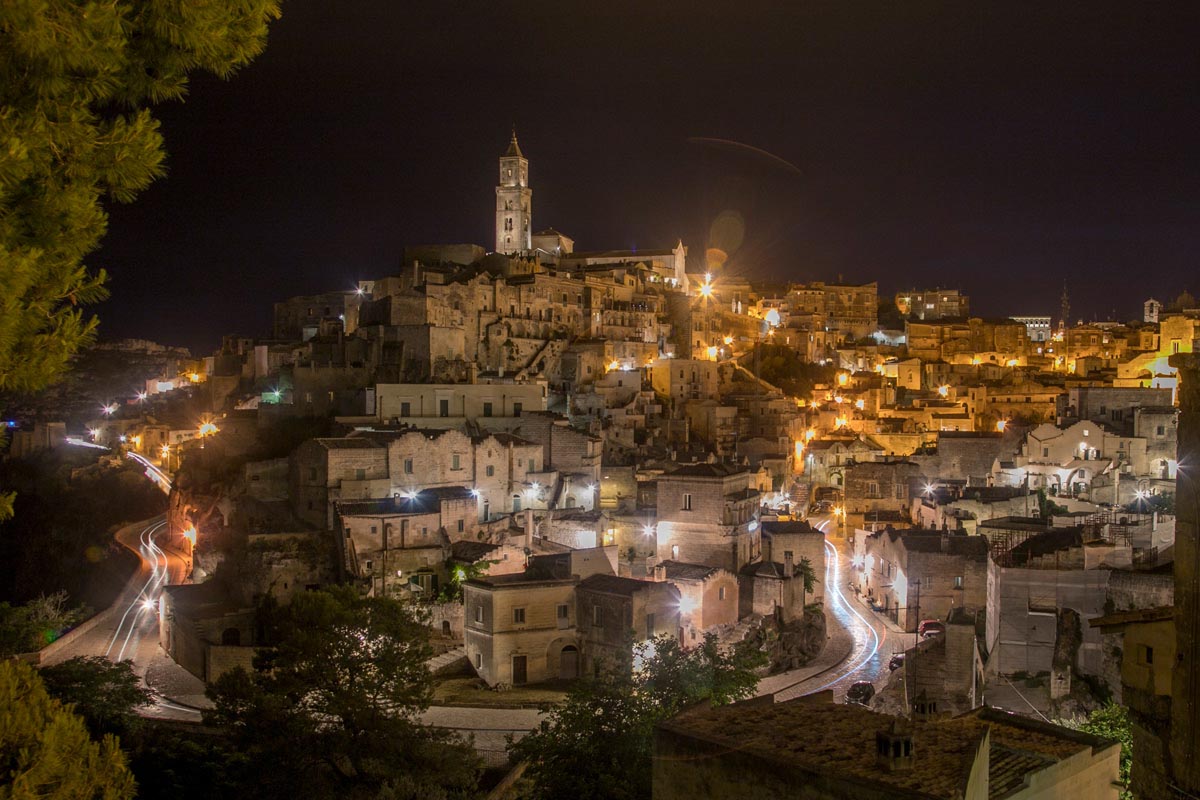 After taking several beautiful shots of Matera night view we went back into the town center for some coffee and cakes. It was Saturday night and the place was packed people. We did not expected such a huge crowd gathering around the town. Many of them looked like locals coming out for a stroll with their dogs. 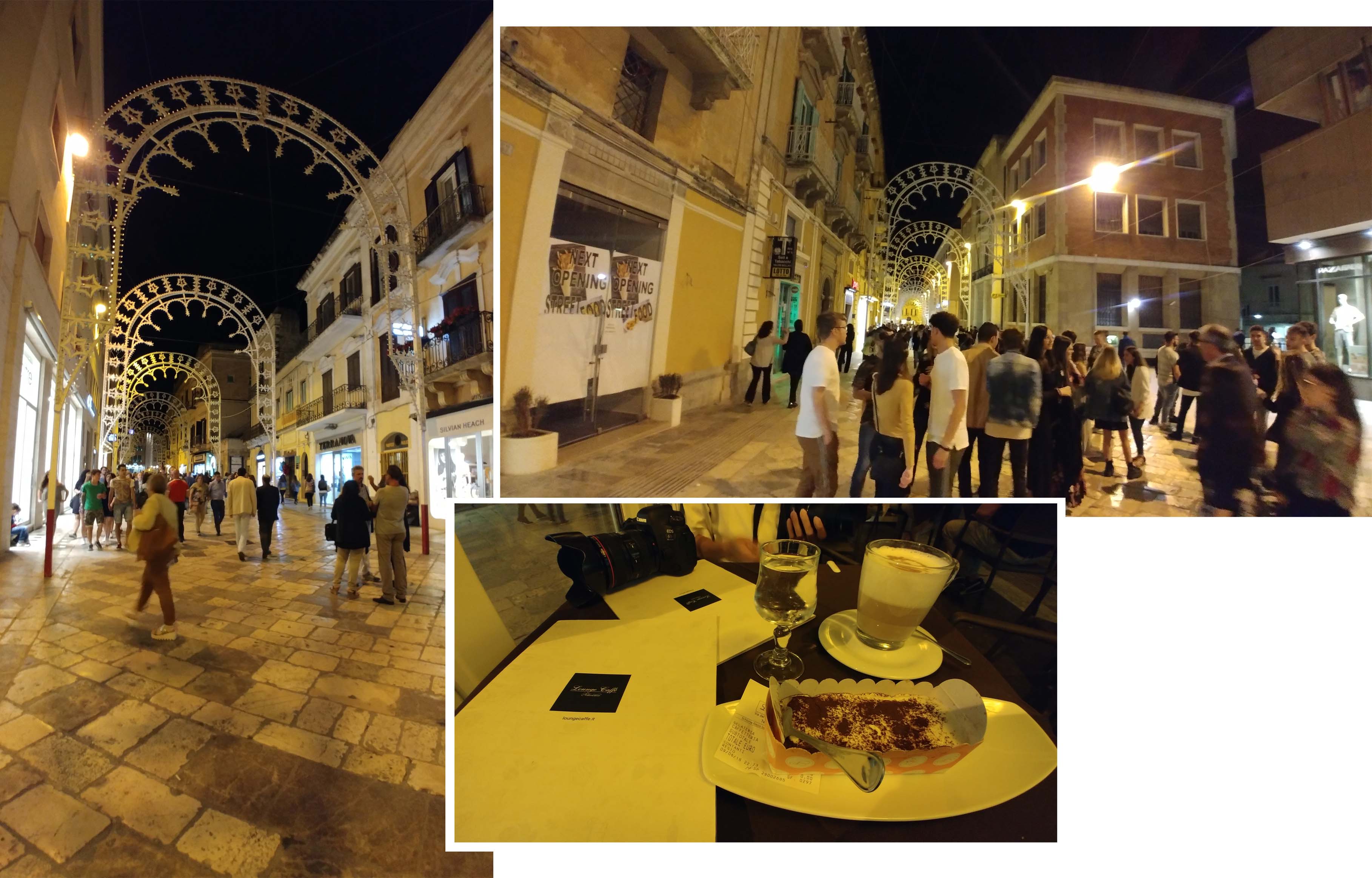 Acommodation for two nights at Matera

Our accommodation, “Home Holiday Matera” was booked from Airbnb (click “Gift Voucher” to received a cash voucher for new Airbnb signup). It was much larger and better than our expectation. It was an entire apartment and we had it all to ourselves! The apartment had two large bedrooms, fully furnished kitchen, bathroom and best of all it had a washing machine. Our host, Simona, was a “superhost”, a title given to host that had consistently get fantastic reviews.

This was first time we rented a “stay” with a superhost and on stepping into the apartment we could immediately felt the comfort of the place. 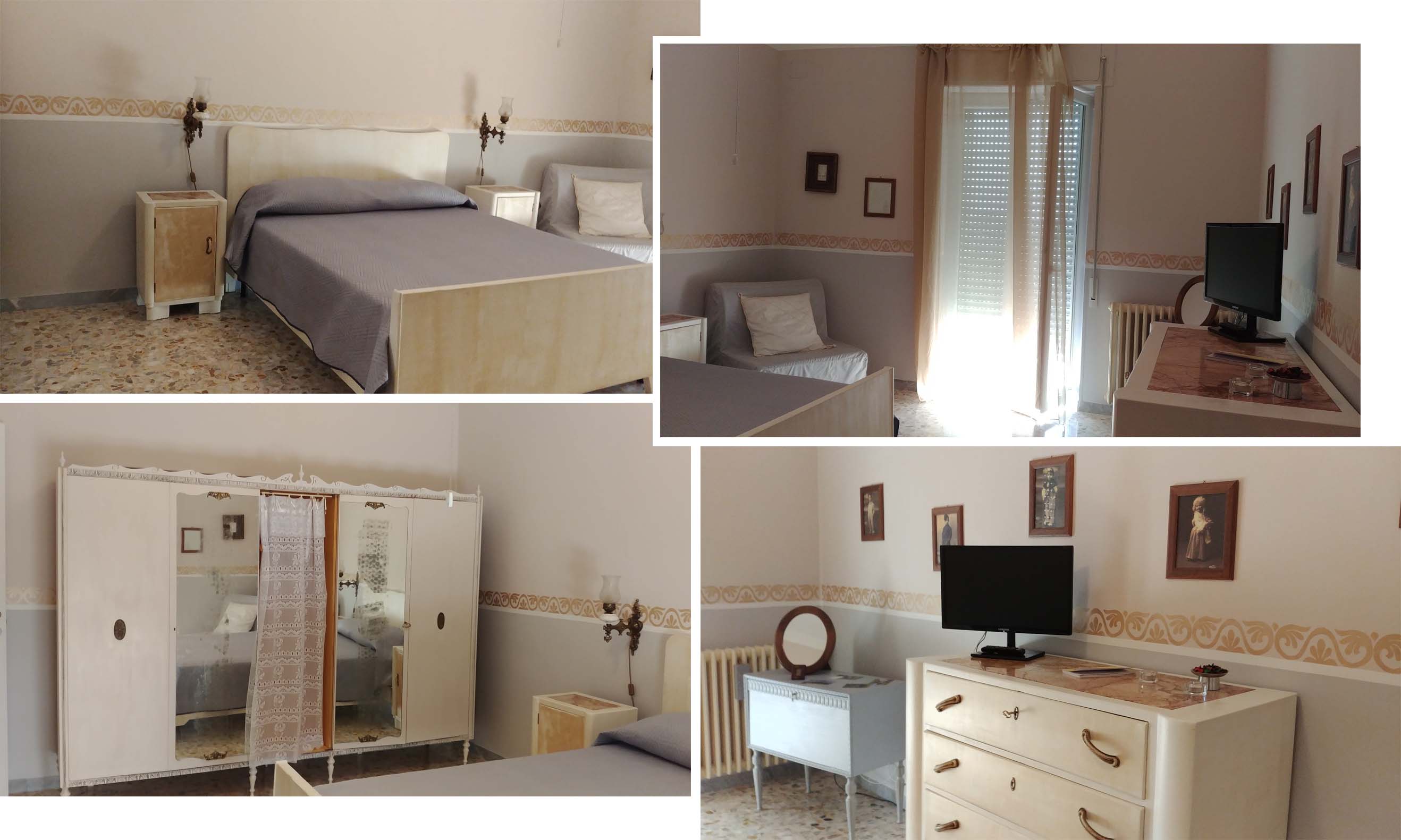 The cost of the apartment was €120 and €8 (city tax) for two nights, it was slightly higher than some of the double rooms offered in other parts of Matera. Before booking this place we had wondered if we should pay more for a bit of extra space/privacy but we were glad we found this place. It was definitely great value for money. It had free parking (behind the apartment) and was only a short walk to Sassi the “old town” of Matera. 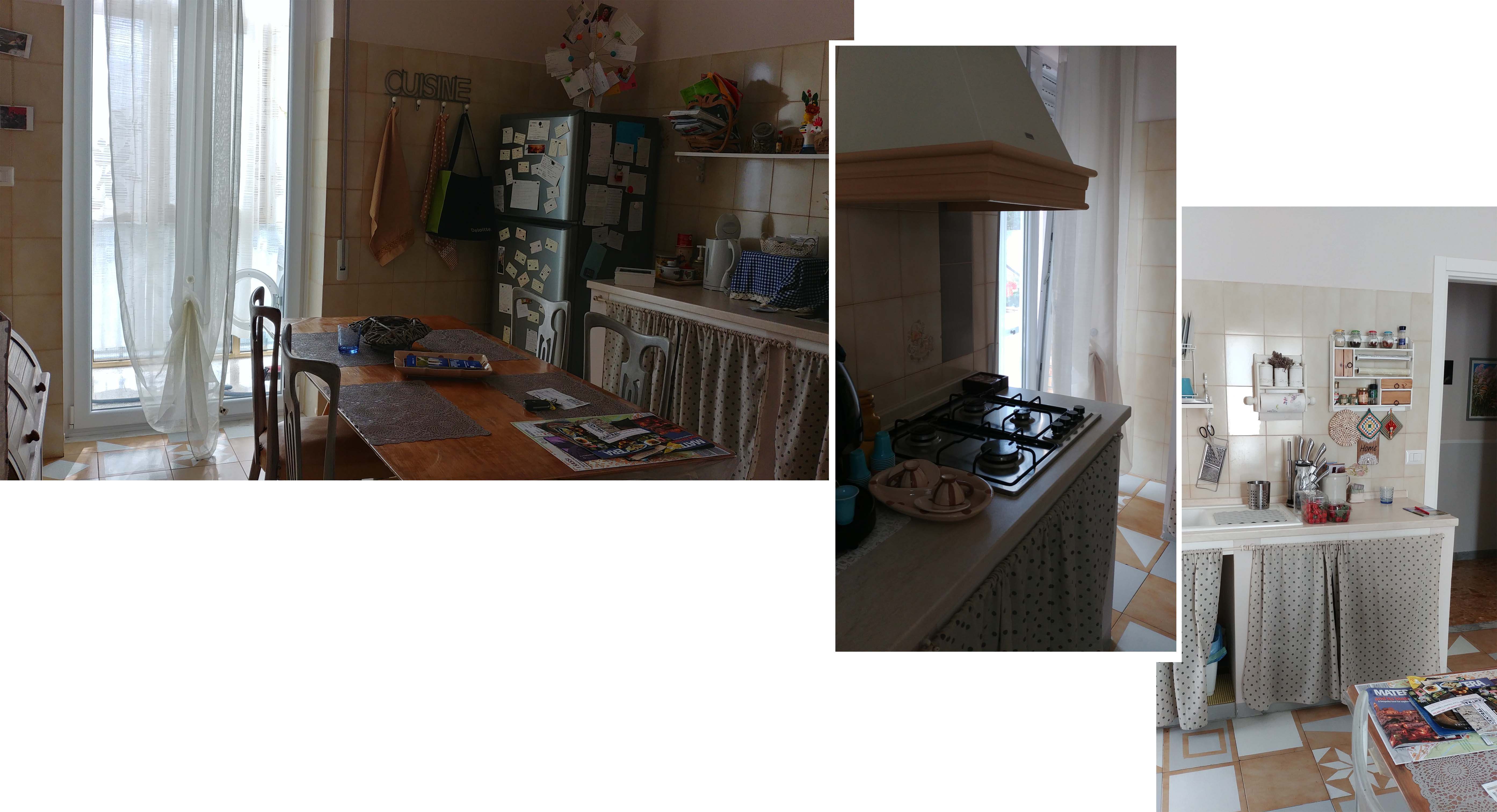 I loved the kitchen, it had all the cooking utensils, cooking oil and spices which allowed us to cooked four delicious meals (2 breakfast and 2 dinner) during our stay. For both  morning we had bacon, eggs and veggie and for the two dinners one was chicken and the other was pork steak. 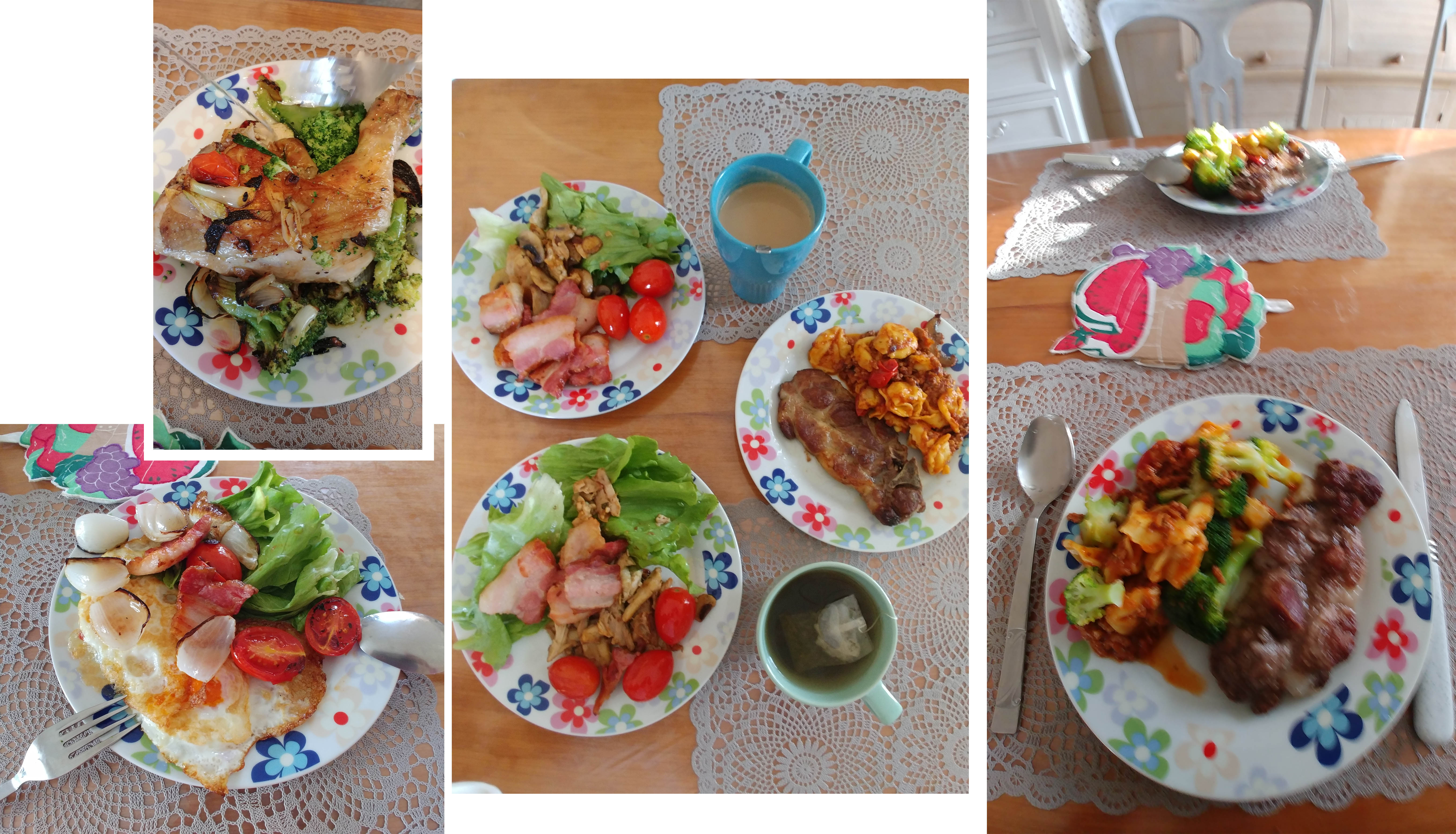 Our apartment was one of the units in a huge three storeys block. There were free parkings around the block. For two days stay we parked just behind the block. 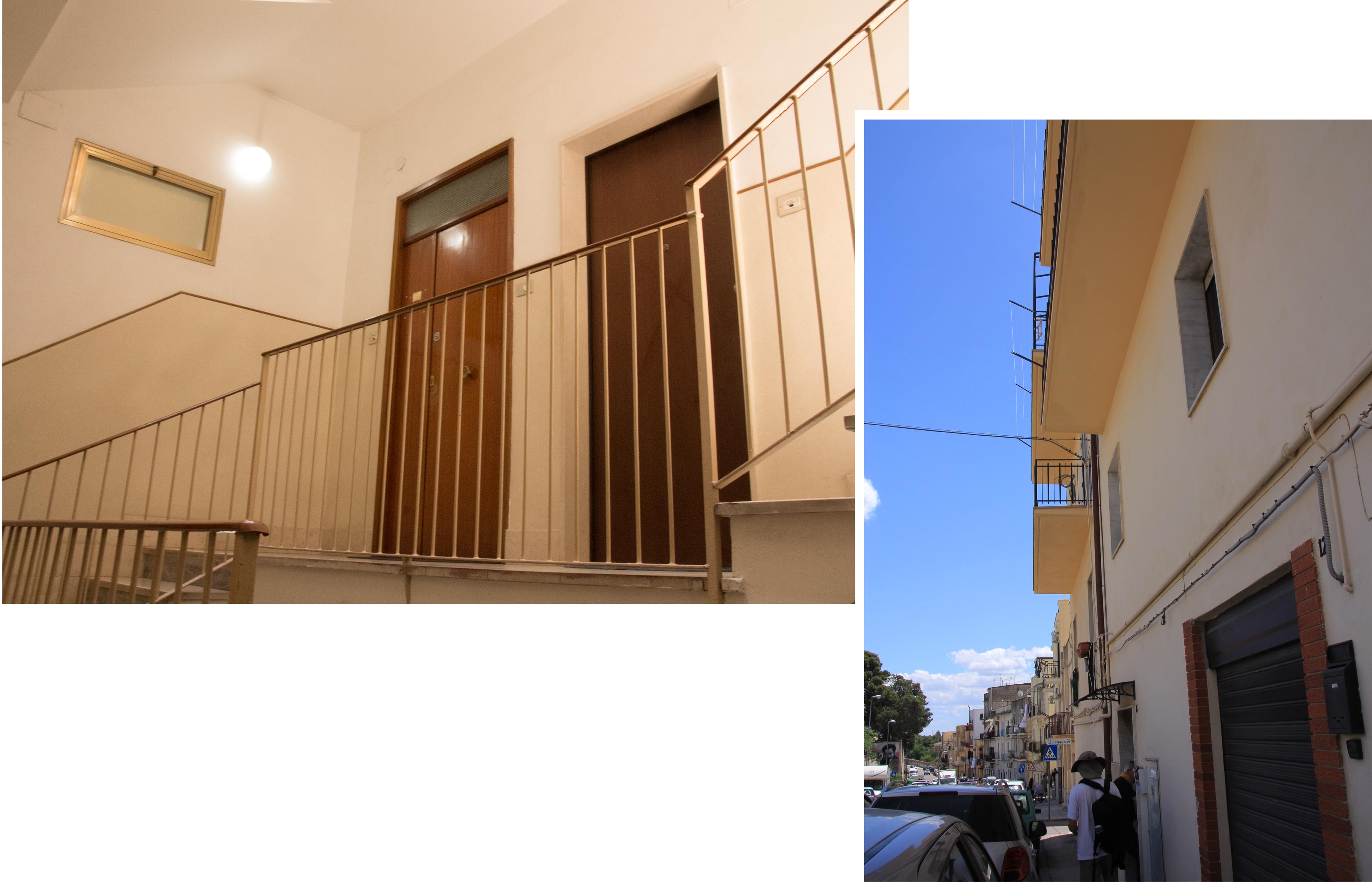