Our plan was to drive to Palermo, the biggest city in Sicily. The journey would take at least three hours over a distance of 262 km. We should reach Palermo at about 1 or 2 pm in the afternoon.  We would be staying a night in the outskirt of Palermo so we should have plentiful of time to explore this city.

By the end of the day
The drive took us through the center of Sicily. The weather was very hot just when we were feeling restless in our car we saw a factory outlet so we detoured to the outlet. We looked around through the shops and ended buying a moka pot. Before we left the outlet village we took a good coffee break.

From the outlet village we mapped our GPS to our stay in the outskirt of Palermo, we thought the route would take us through the center of Palermo but it did not. The highway bypassed he center all we could see from afar were highrises. By the time we reached our “stay” at Palermo it was near 3.30 pm. At 6 pm we drove to Palermo town center to explore the old town. The old town was much larger than we expected with many interesting historical buildings. We ended late into the night and got back at our stay around midnight.

A factory outlet in the middle of nowhere

One hour and 15 minutes into our drive from Ortigia to Palermo, just when we were longing for a coffee break we saw a signboard point to a Outlet Village (co-ordinages 37.572702, 14.479541). Shopping! 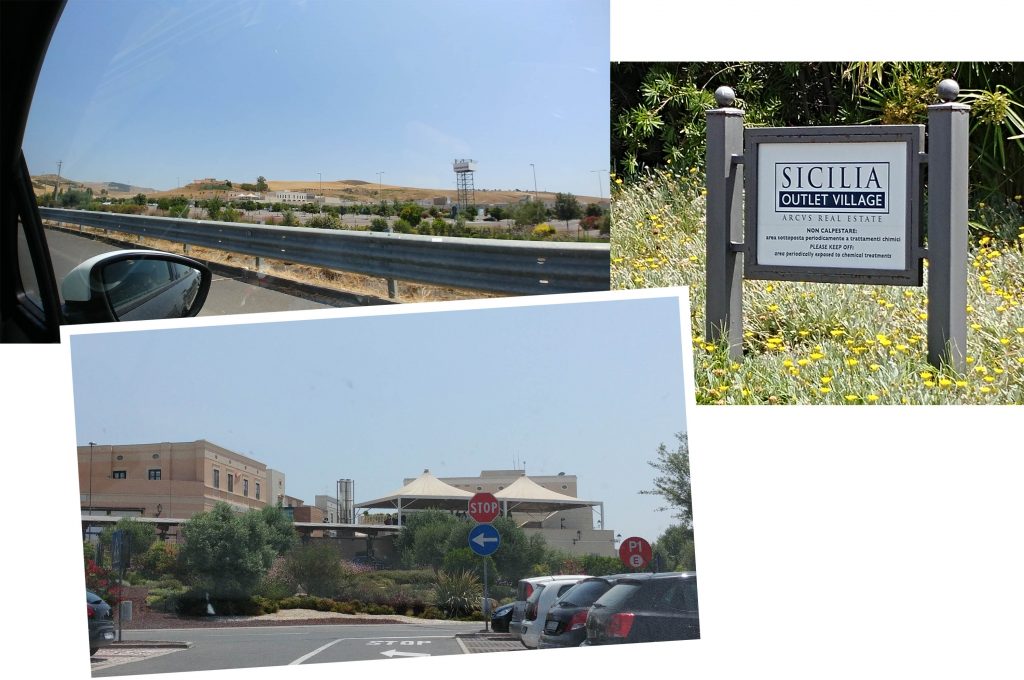 This was a huge outlet with over a hundred shops selling mainly branded goods, there were also cafes and restaurants. The outlet village consiste of individual shops and in between shops there were no covered shelter so to move from one shop to another we had to walk out under the stifling hot sun. It was weekday afternoon and the hot weather might be the reason for the low number of visitors at this outlet village. 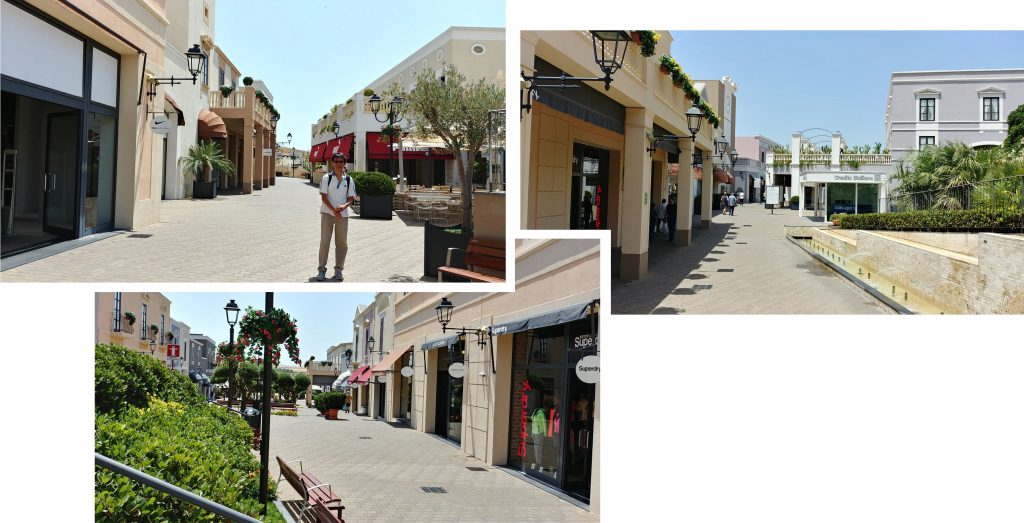 We walked around “window shopping”, there were many attractives sales (discount) offered by almost every shops but nothing captured our interest until we reached a store selling kitchen products. We pick up a Moka pot and it was Italian Made. The Bialetti Moka Express 2 cup coffee pot was on 20% discount and costed €15. 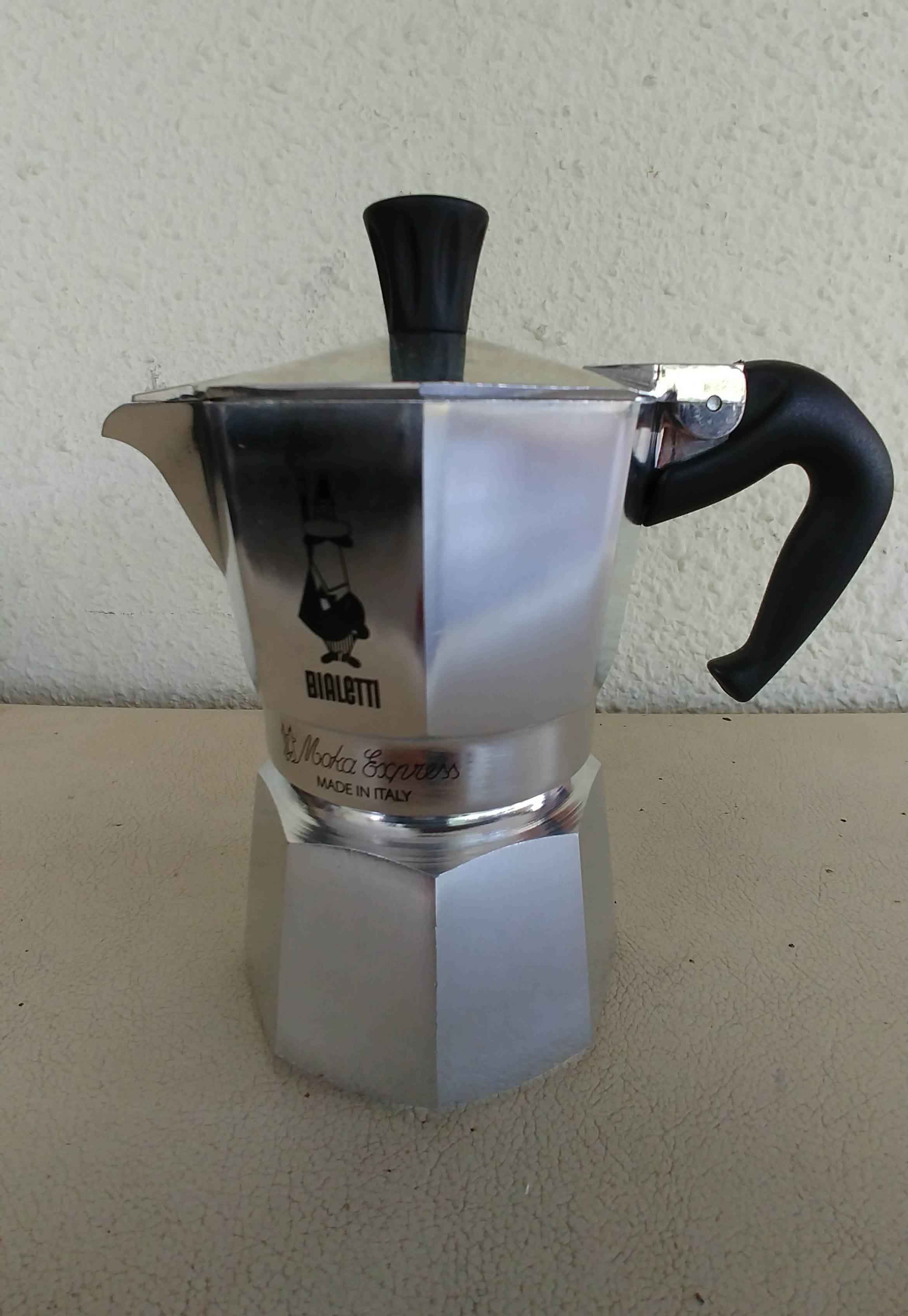 We were introduced to this stove-top coffee maker by our host in Florence and since then we had used it at various “stays”. It was pretty easy to use, small size and handy and the best part was that we could buy any coffee powder we liked. Our coffee maker back home was a standard Nescafe Dolce Gusto type . It could only be used with Nescafe coffee capsules which came with limited number of favours.

Since then we had been looking around for a moka pot and we only wanted to purchase the Italian Made ones.

There were all sort of moka pots in the store, of different colors, sizes and shapes. The modern one came with a base that could be plugged into an electrical outlet.

We bought a Bialetti Moka Express 2 cup coffee pot because it was small and handy and we planned to bring it with us on future trips t countries where coffee drinking culture was not prevalent.

Before we left the outlet village we went to have our cake and coffee at one of its cafes. The price was rather reasonable, for a cup of cappucino and a chocolate pastry the cost was €3.80. 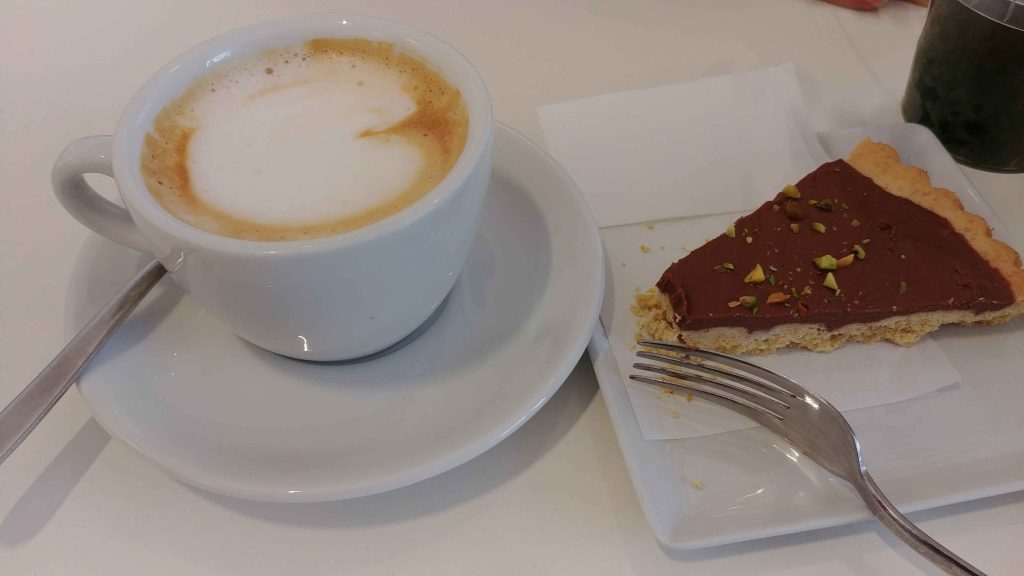 We reached our “stay” in the outskirt of Palermo at about 3.40 pm and after a short rest we drove out to Palermo central at about 6 pm. Our target was again an “old town” which as usual was in a non-resident-car restricted zone. We drove as near the border of the ZTL zone as possible searching for carpark where we could park our car. It took us a while before we found some paid parking space (blue lines) along Via Ugo Bassi.

From there we walked to Palermo old town and spent more than four hours exploring the old town before we returned to pick up our car. 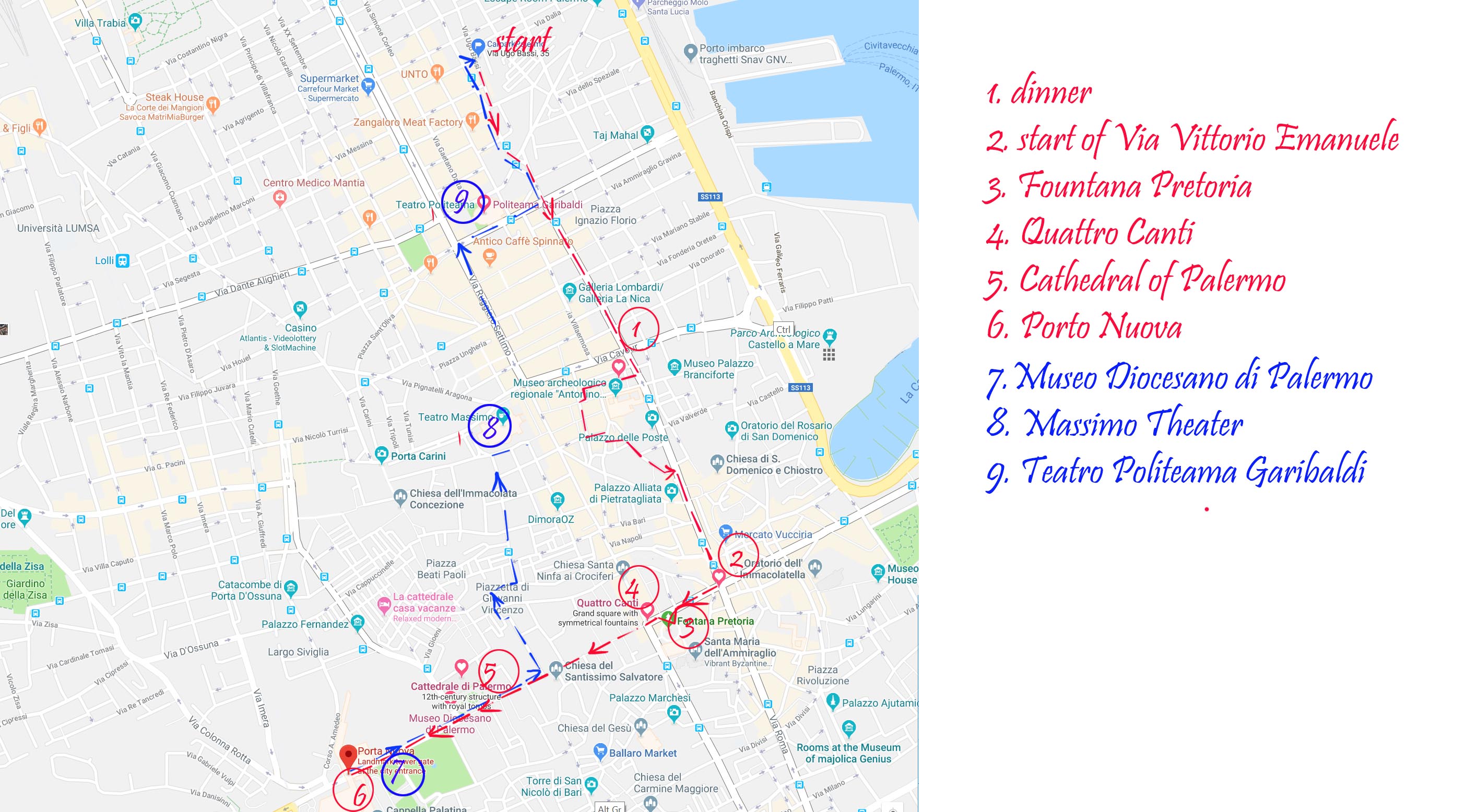 Our walking loop route covered about 6 km. Our first destination was to search for a place to sit down for dinner, I was famished. The first interesting cafe/restaurant we saw was selling crepe so we had crepes for dinner and the cost came up to €8. Actually the food did not taste as nice as it looked on the pictures displayed at the store. 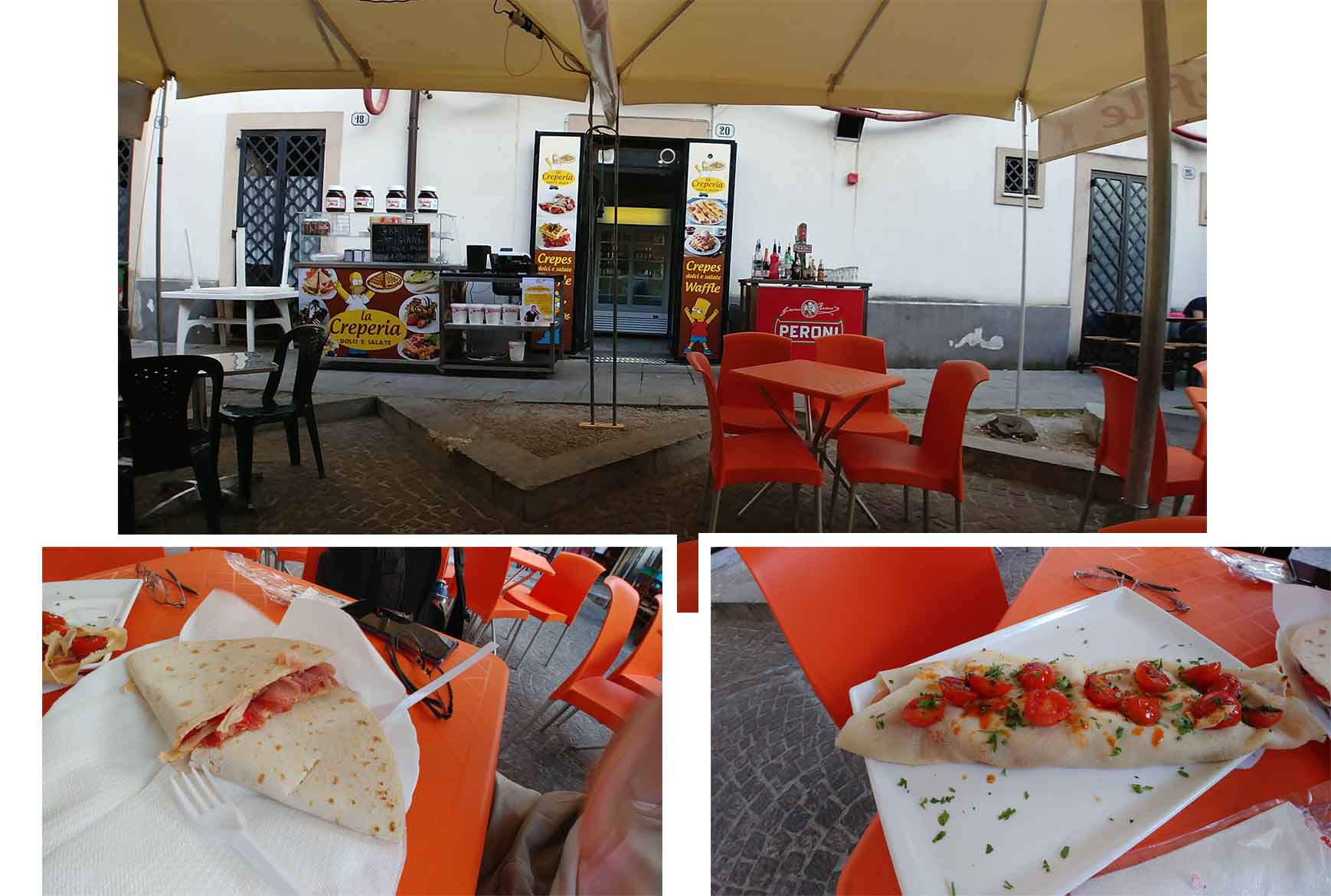 After dinner we walked further down the same street (Via C. Ramondetti Fileti )and came to a cluster of cafes and restaurants and every one looked more interesting than the crepe store where we had just eaten. I was feeling “huge regrets”! We should have been more patient! From there we moved back onto the main road until we came to the intersection with Via Vittorio Emanuele II. We turned right into Via Vittorio Emanuele II. 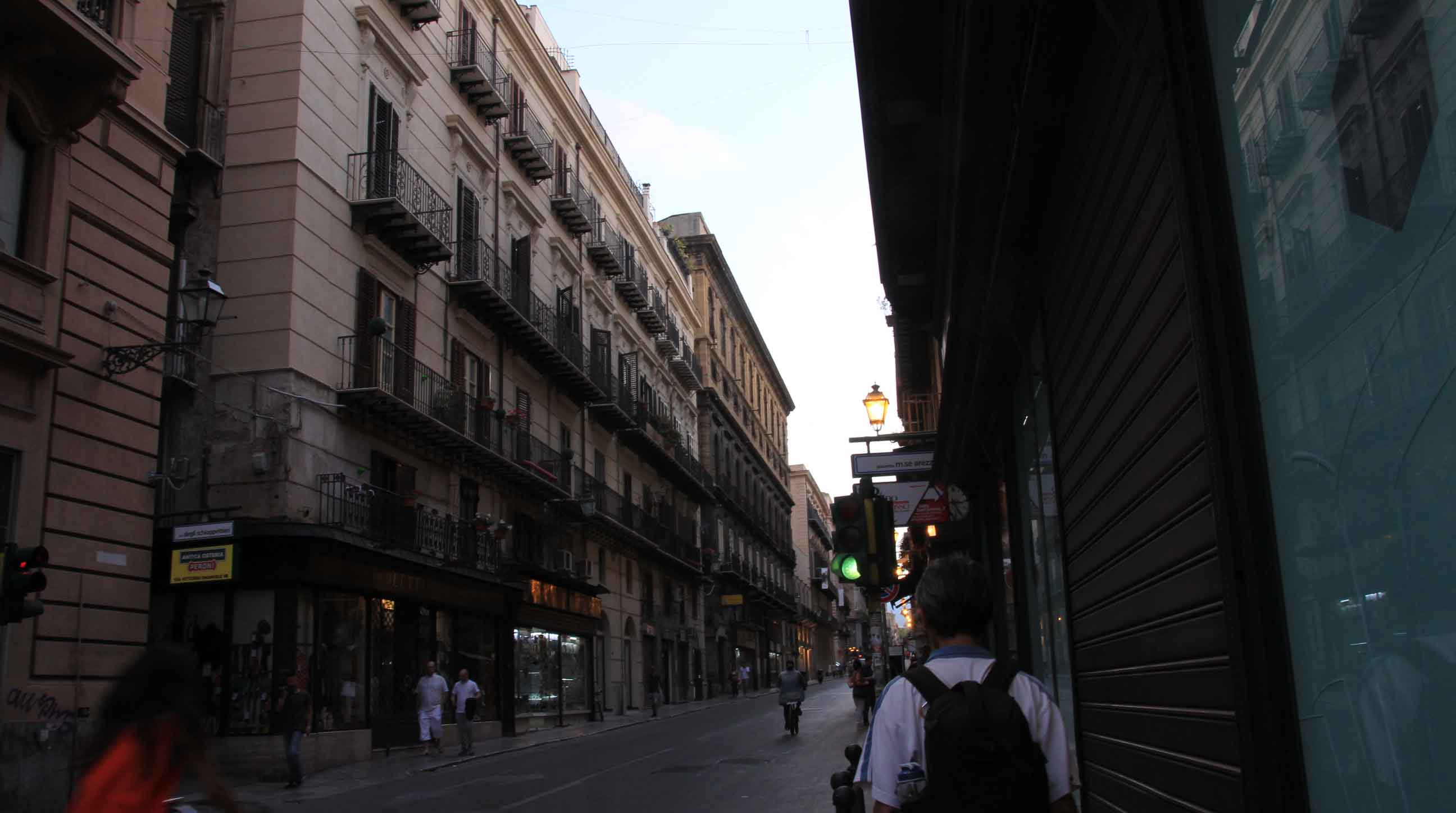 Via Vittorio Emanuele II was previously called Cassaro and it was the oldest street in Palermo. Both sides of the street was lined with  three to four storey buildings and they looked old. Soon we reached a huge round fountain which was set in a square, Piazza Pretoria surrounded by  majestic buildings on three sides.

Just after the fountain was an interesting intersection. On the four corners of the intersection were four very similar looking four storey slightly curve buildings. At the middle front of each building there were a fountain at the lowest level and statues on the higher levels. These statues represent the four Spanish Kings of Sicily and the patronesses of Palermo.

After the intersection the road that continued straight on had stone bollards at its start. It seemed that no vehicle was allowed in and it was a pedestrian walk from there onward. A short walk later brought us to a very majestic building. It was the Cathedral of Palermo. The structure was characterized by several different styles, due to a long history of additions, alterations and restoration through the centuries. 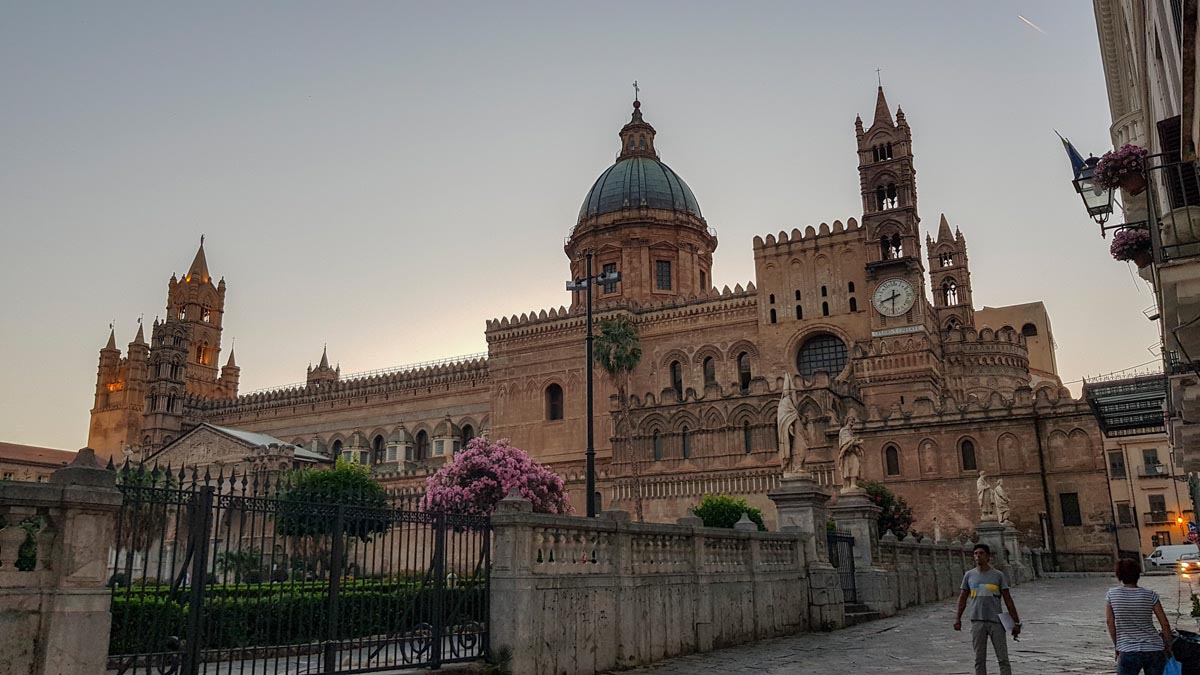 From the Cathedral we strolled down all the way to Porta Nuova. Unlike other porta that we had seen this porta was huge and was a complex structure.  Porta Nuova was the city gate of Palermo. It represnted the entrance of Cassaro from Corso Calatafii (the way to Monreale). The gate was built to celebrate Charles V’s conquest of Tunis and his visit to the Kingdom of Sicily. 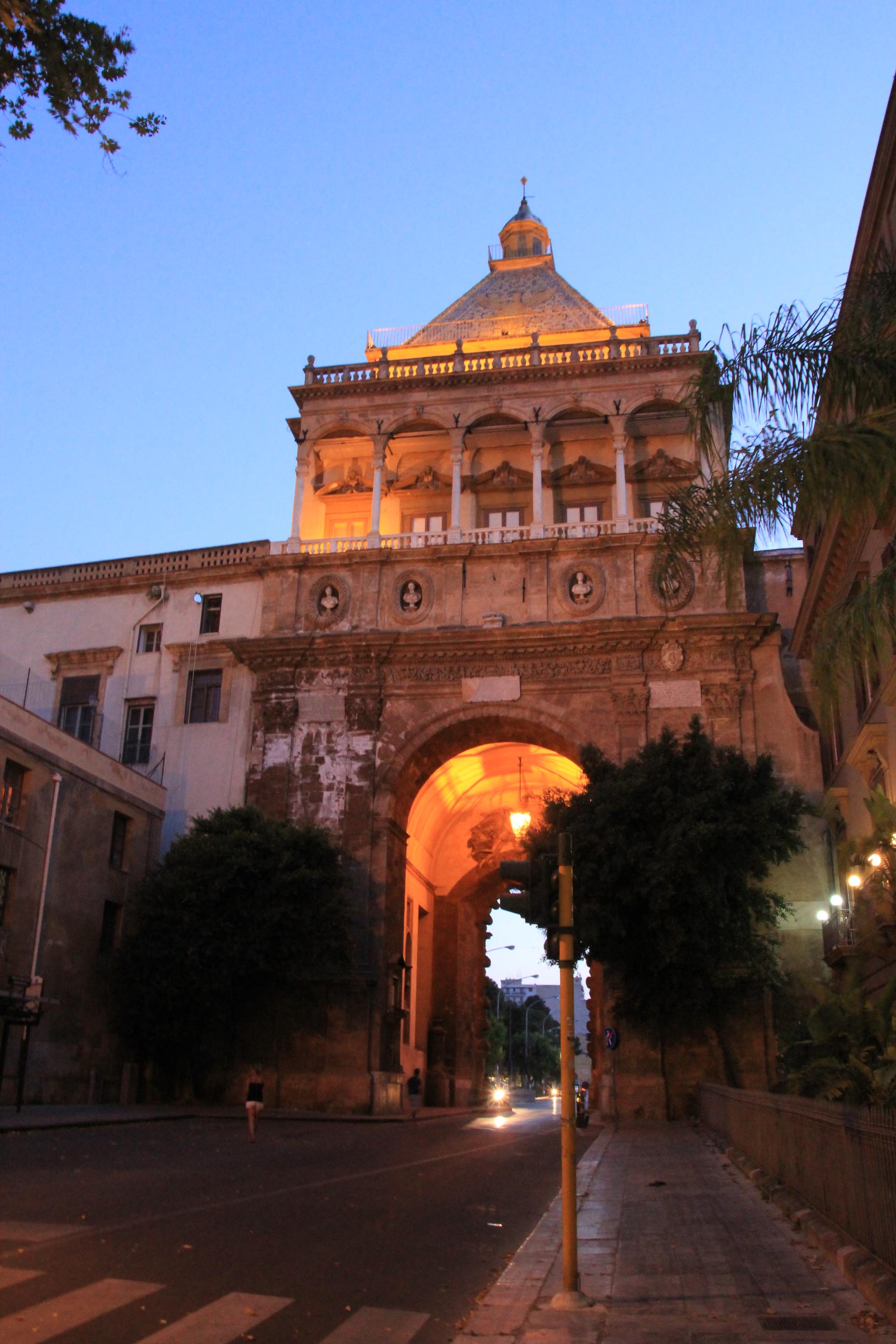 It was almost 9 pm when we reached Porto Nuova. The sun was setting and soon the sky took a brilliant blue. We then started our return walk to our car taking a slightly different route. 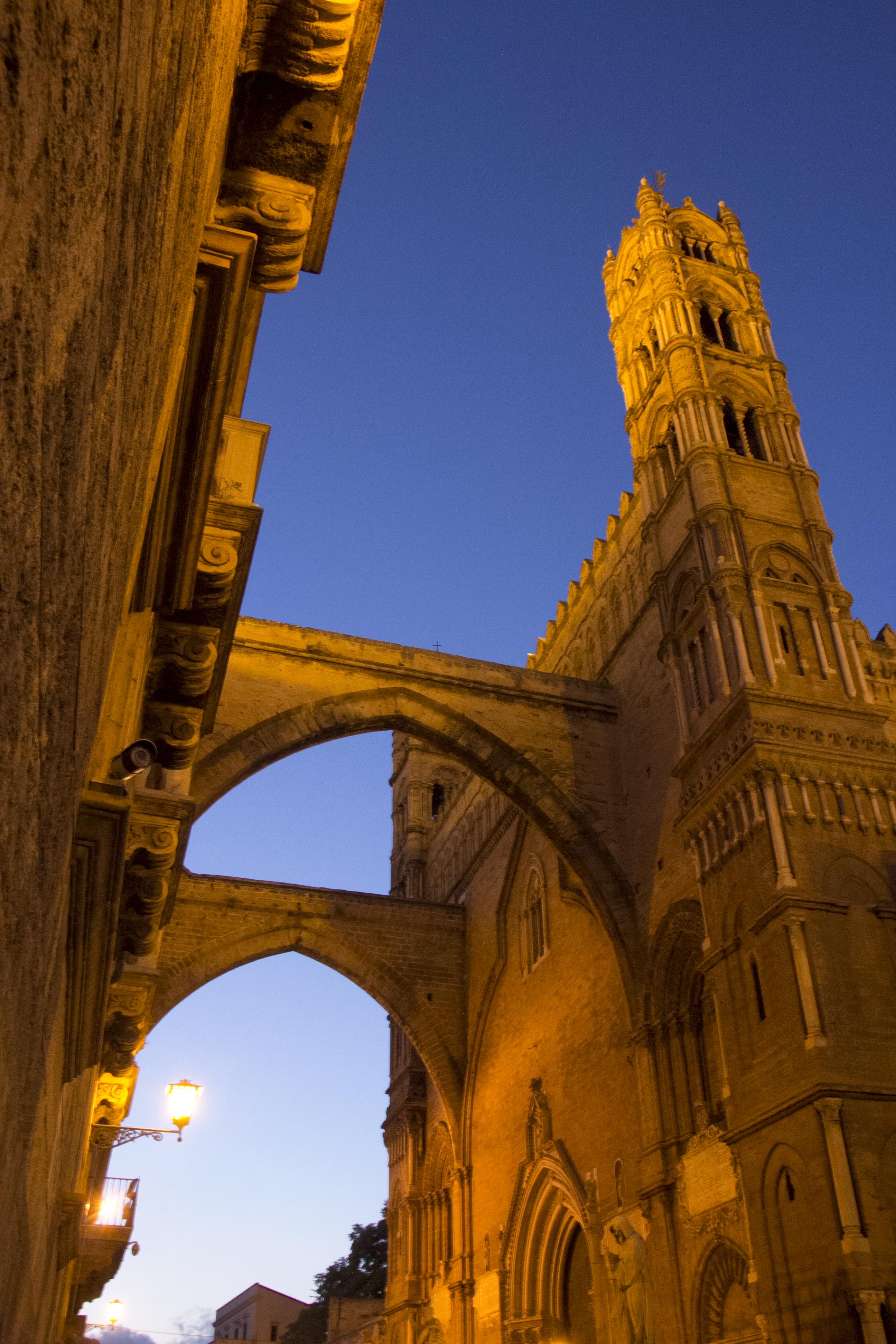 Our route took us passed Massimo Theater. This was the biggest opera house in Italy and was dedicated to King Victor Emanuele II. The opera house was closed and interestingly many people were sitting outside the gate of the opera house chatting and laughing, passing their time. 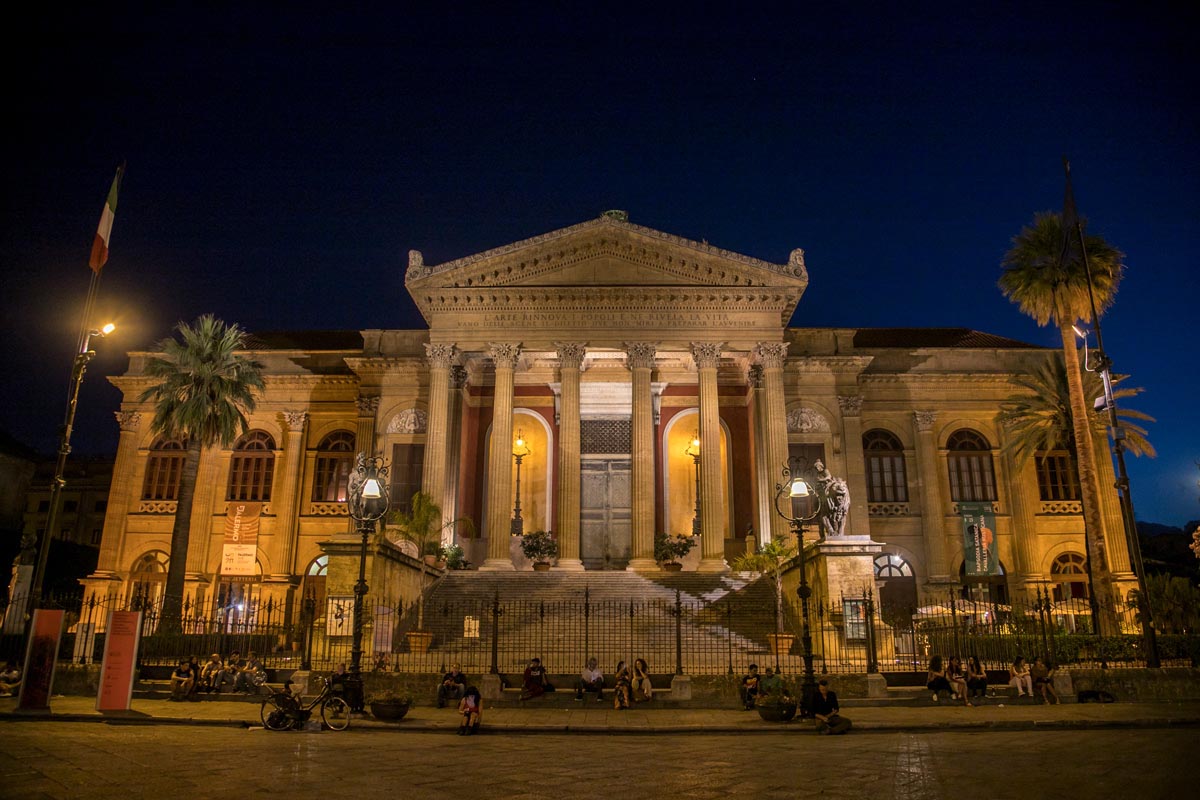 The final building that caught our attention was Teatro Politeama Garibaldi. It was a beautiful round shape building and considered the most important building after Massimo Theater. It had a large entrance,  consisting of a triumphal arch with the statues of Apollo and Euterpe on a drawn chariots pulled by four horses and escorted by two knights on horseback racing through. 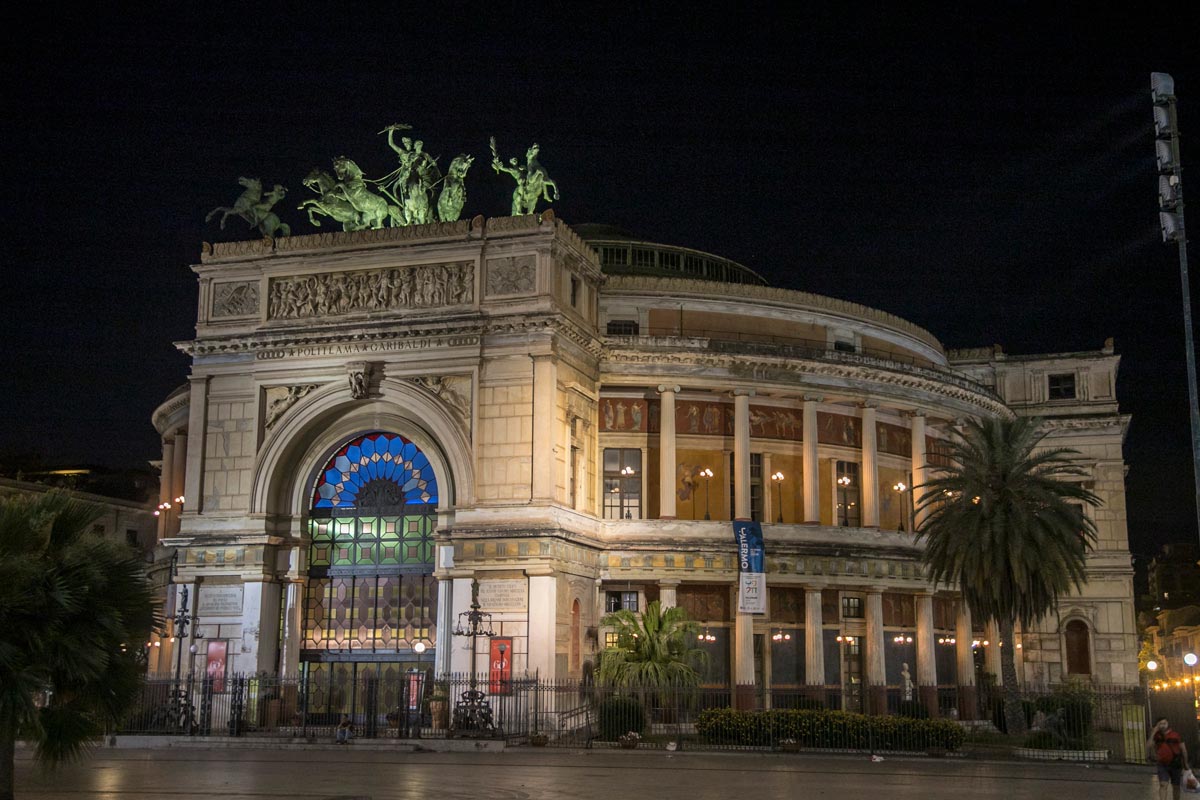 Our Stay at Palermo

We booked our stay at “Villa SiS Dandify” from booking.com and the charge was €56 for a night. This was a private villa of our host who liked to be addressed as grandfather Sergio. When we arrived at our stay we found that it was behind a walled community of villas. We entered the main gate after communicating with our host from an intercom at the gate. After the gate was a road with branches that lead to different villas. We found Villa Sis Dandify and entered it through a second gate.

Villa Sis Dandify was huge with several buildings in its compound and a swimming pool and a gazebo. We met grandpa Sergio who had a sturdy build and spoke very good English. He brought us into the main building through a glass door along a veranda facing an odd shape pool. We walked into a common living room with deep armchairs and a grand piano at one side. From a door in the room we entered a short corridor that led into our double room.

Our double room was beautifully furnished in the traditional way. It was huge with a sitting area, fireplace and our own ensuite bathroom. Though it had a window there was no view as the window looked out into the backyard/wall of the house. 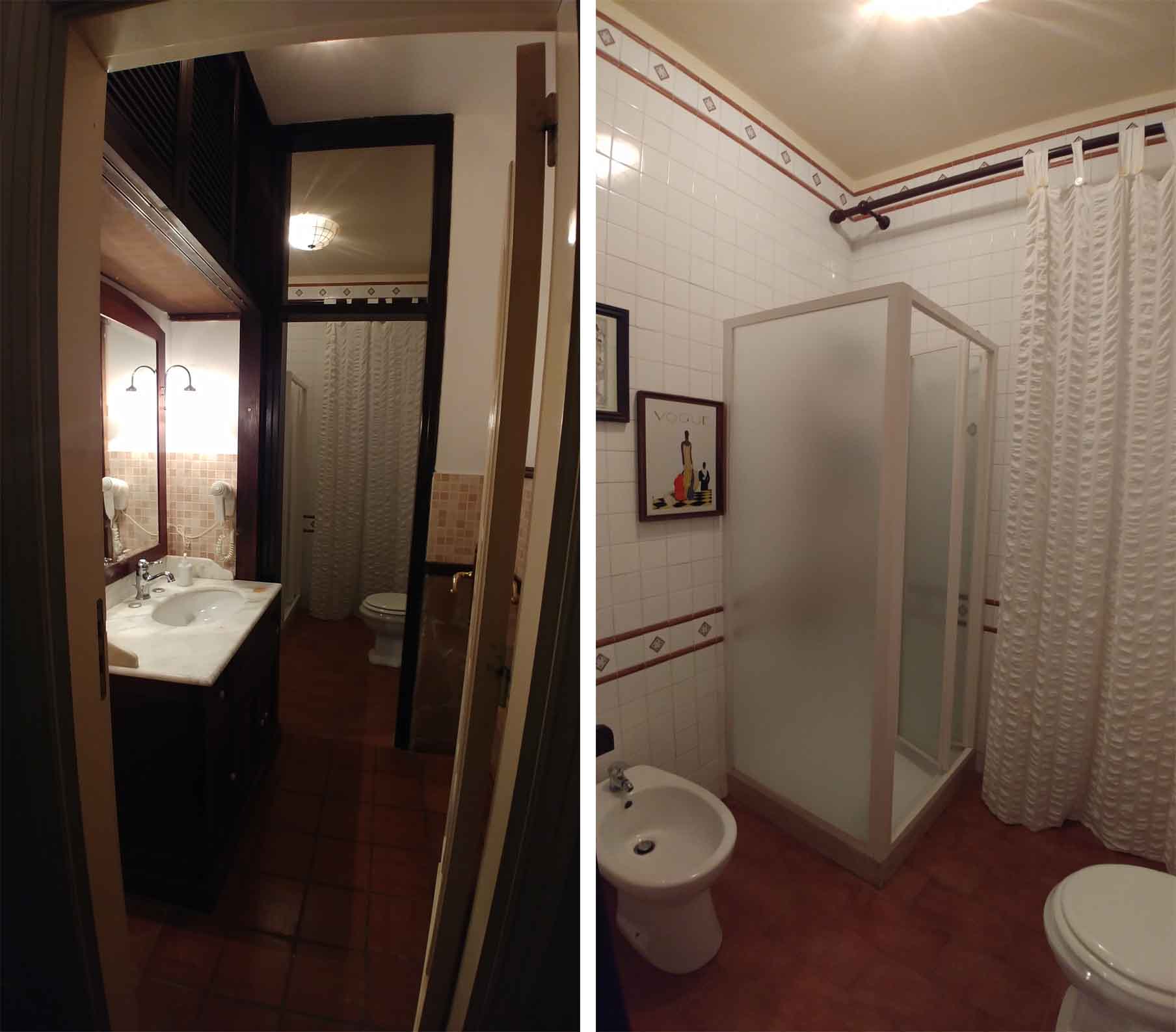 Grandpa Sergio was a very nice host. We emailed him requesting to changing our booking date to one day earlier and he let us had the double room at the same price. The price of the room came with breakfast. Though there was a huge kitchen in the villa, it was not meant for guest.