The plan for the day was to visit Monreale, Cefalu and Milazzo. Monreale was considered as one of Sicily most pretty hilltop towns and Cefalu as one of the most beautiful sea-side town. Milazzo was just a convenient stop for the night.

By the end of the day
Monreale was a quaint beautiful small town and a very pleasant place to stroll around. Cefalu was more scenic than we expected and Milazzo was a nice place to stop for a night.

It took us less than 30 minutes to drive from Palermo to Monreale. There were a couple of paid parking areas outside the border of the old town. We rather parked as near to the old town as possible to minimise our walking to the old town. Our seach took us into the old town where we probably took a wrong turn into the non-resident vehicle restricted zone or the no-vehicle zone because we saw a local woman yelling at us about getting our car out of the place!

We drove a couple of loops before we found a “blue lined” (paid) parking area on a road (Via Cappuccini palermo) that bordered Cathedral of Monreale. 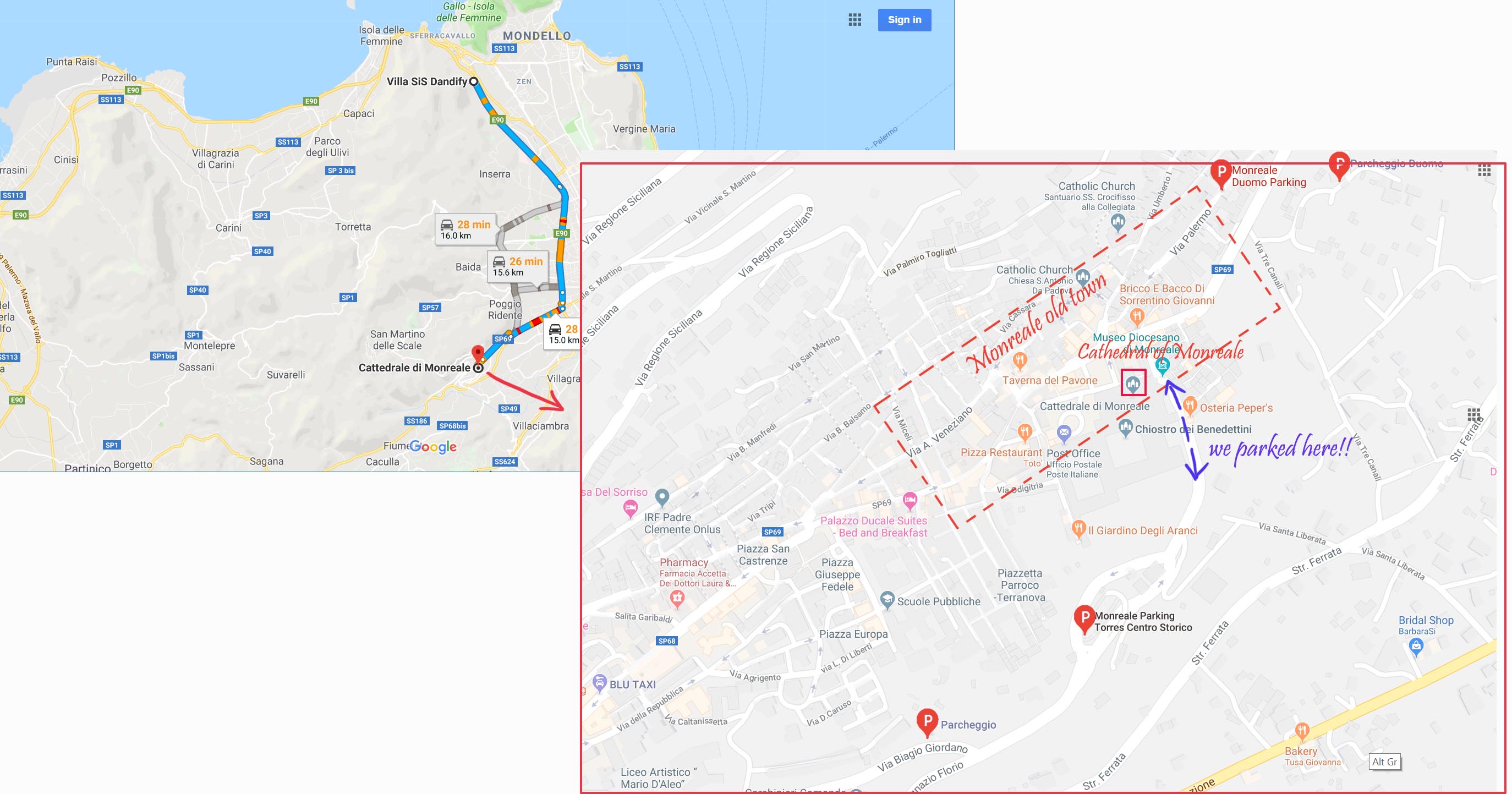 We parked our car and was about to get a parking ticket from a nearby ticketing machine when a young man came by to issue us a parking ticket. We were reluctant to pay him as we were afraid that it could be a scam. There was a parking machine so why was the young man issuing ticket? Unfortunately the man was very insistent so we paid him €1.50 for an hour. 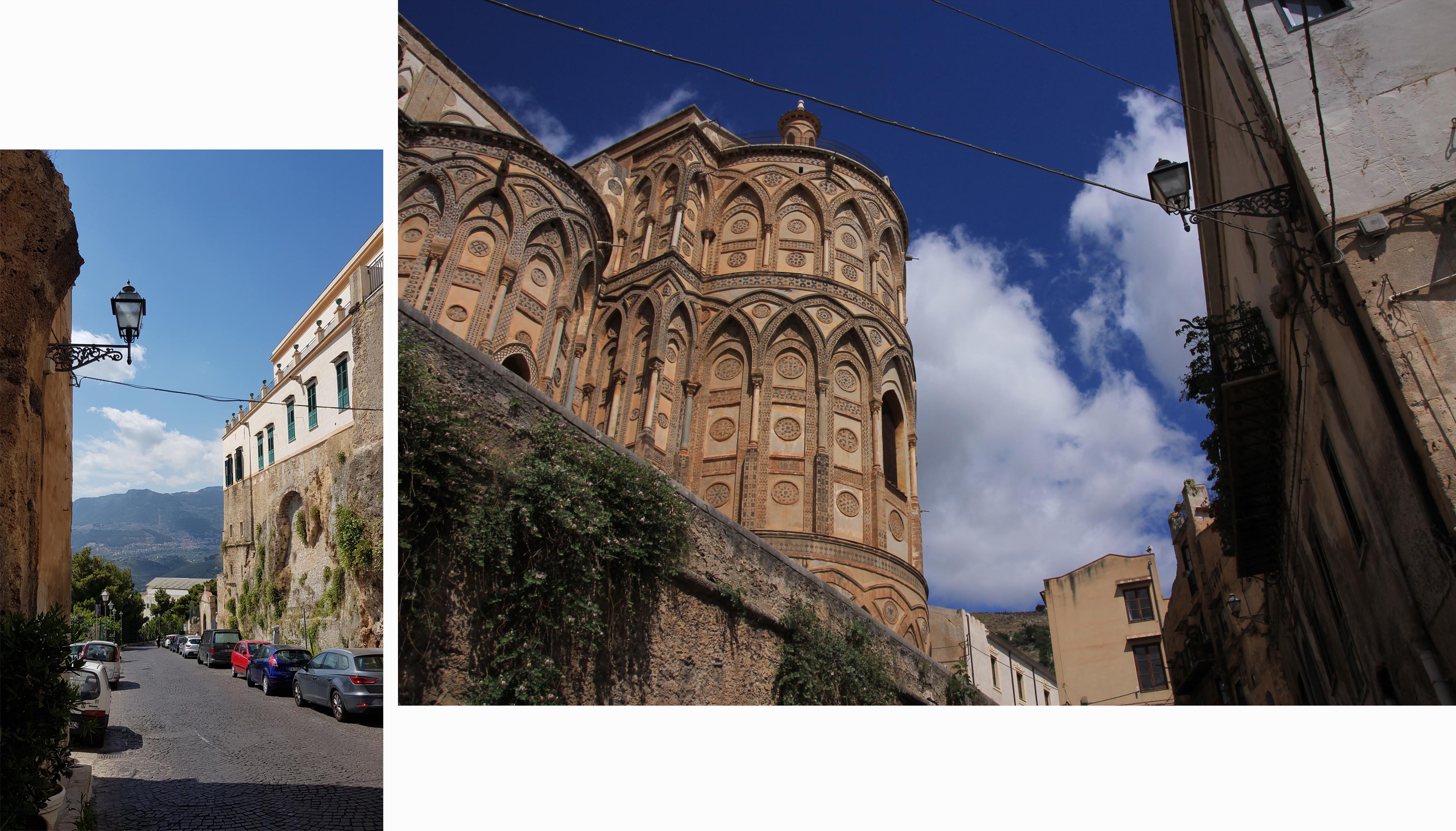 Parking on road, Via Cappuccini palermo

We walked up Via Cappuccini palermo and on our left was part of a high wall of the Cathedral of Monreale. Over the wall we could see portion of the facade the cathedral. We turned left onto Via d’ Acquisto which brought us to the front of the cathedral. This cathedral was declared an UNESCO World Heritage Site in 2015. 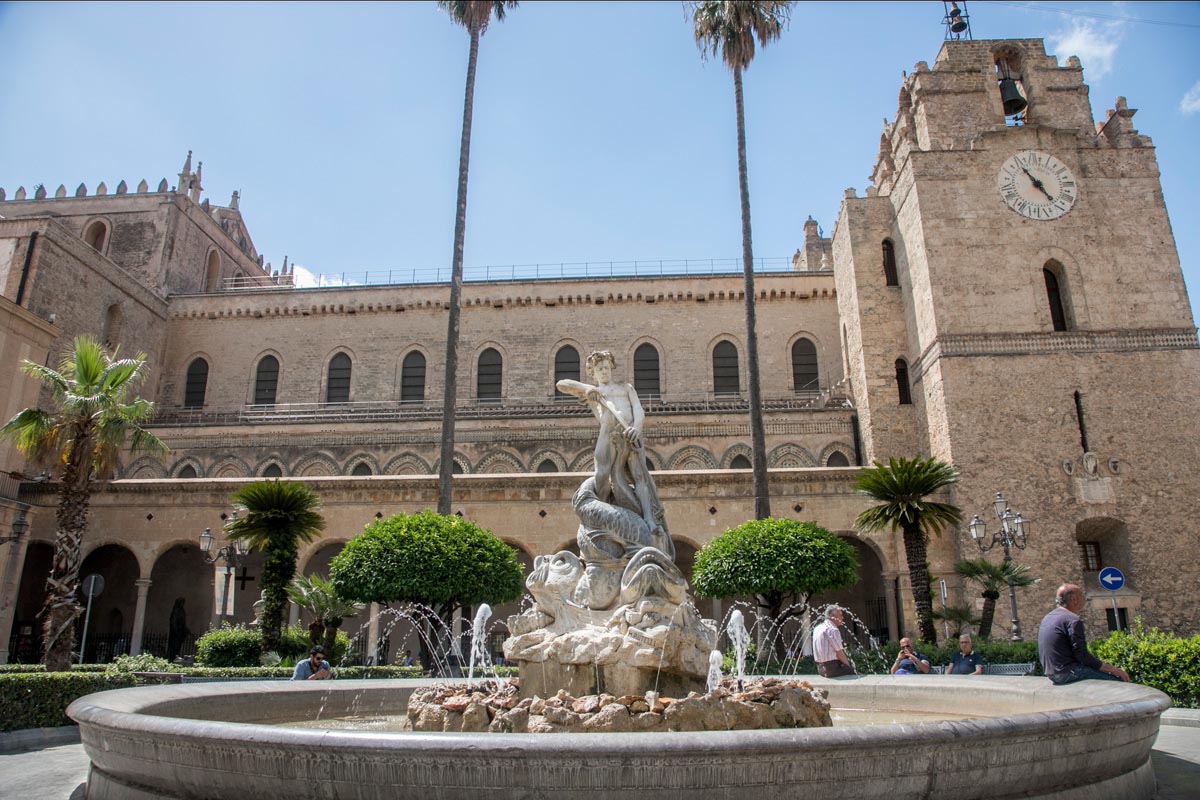 Cathedral of Monreale was a national monument of Italy and one of the most important attractions of Sicily. It was a fine example of Norman architecture. Walking down the street after the cathedral was  street of of old houses some two storey high some three storey high. 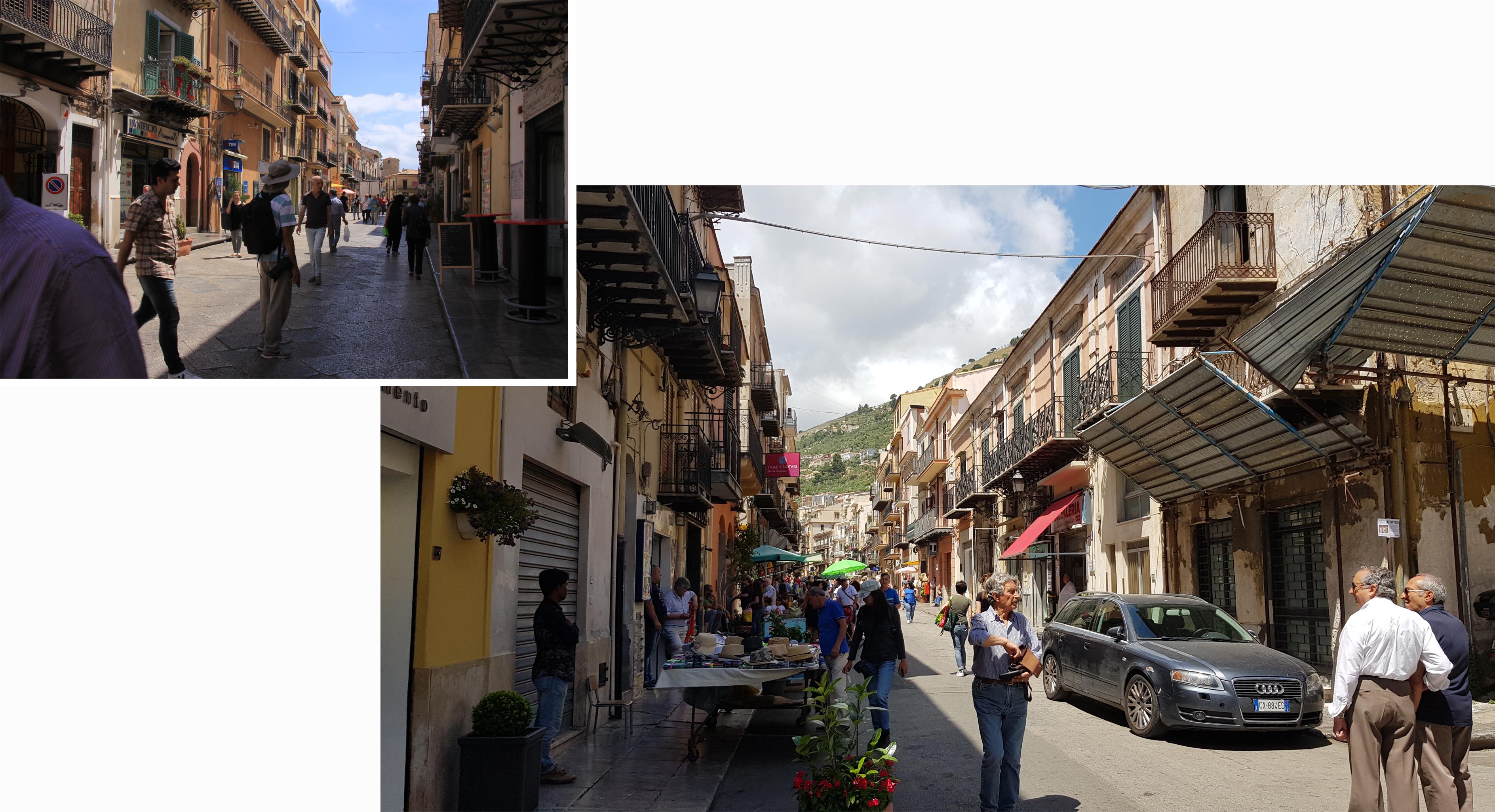 We came upon a few fruit shops displaying their fruits in the open. Fruits and fruits, it was just too difficult to resist such beautiful display of fruits so we bought some cherries!  The smaller box was for €1  and the larger one for €2. Very inexpensive and they tasted sweet too!

We left Monreale at about 1 pm and drove 76 km for about 1hr 15 min to Cefalu. Cefalu was considered one of the most beautiful seaside towns in Sicily. We did not park our car at the carpark directly by the beach but on the main road parallel to the beach as we found that it was free parking from 2 pm to 6 pm. 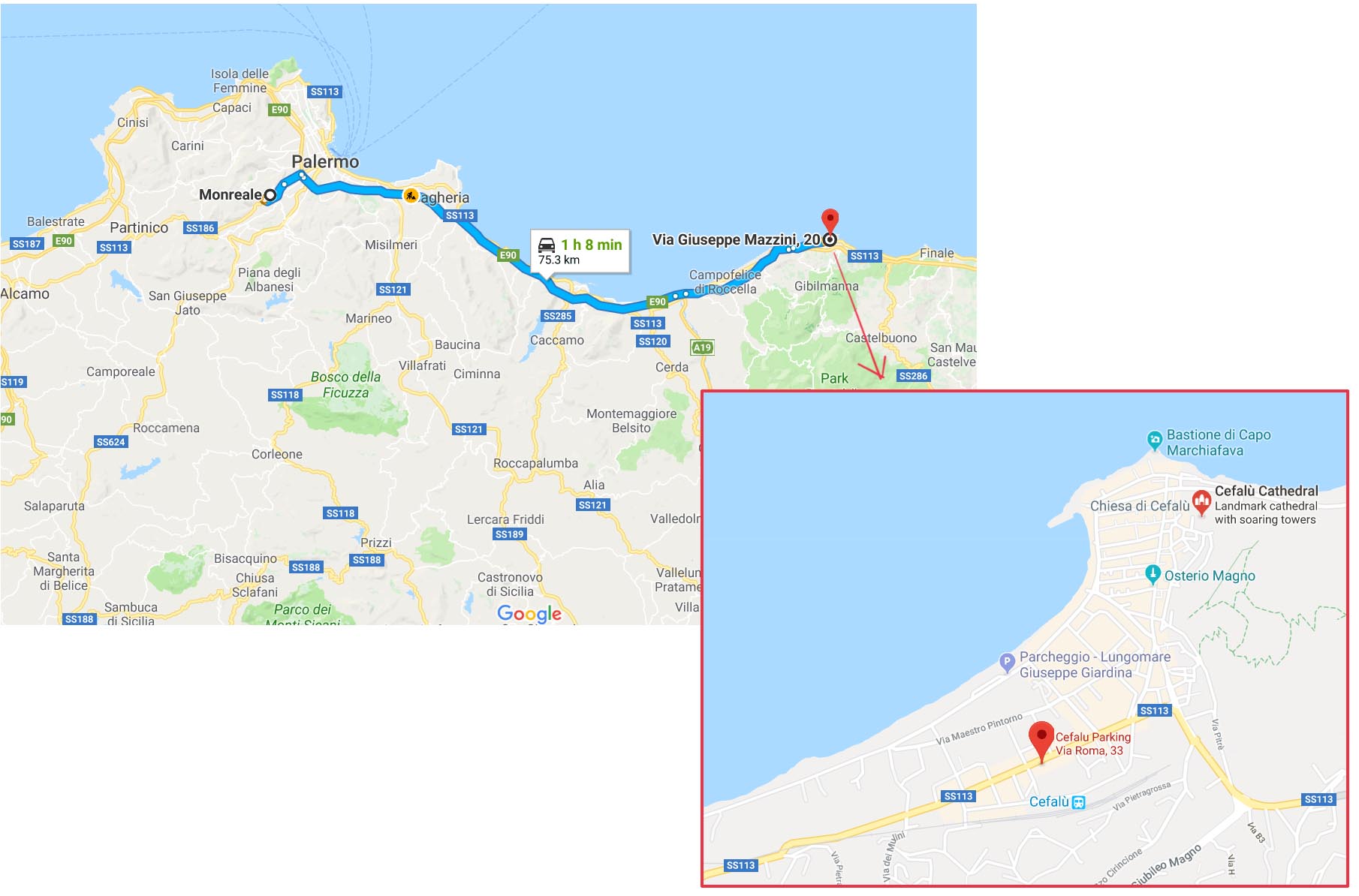 Route to Cefalu and parking

We were going to the beach to have our coffee break and we came prepared with icecream! Just before beach we stopped at a supermarket (Conrad) to pick up some icecream. A pack of six stick chocolate-coated-vanilla icecream was on sale going for only €2. Incredibly cheap! We had to find a place to eat the icecreams before they melted! We stopped at the first cafe at the beach and ordered two cups of capucinno (€1.80 per cup) to go with our icecreams. 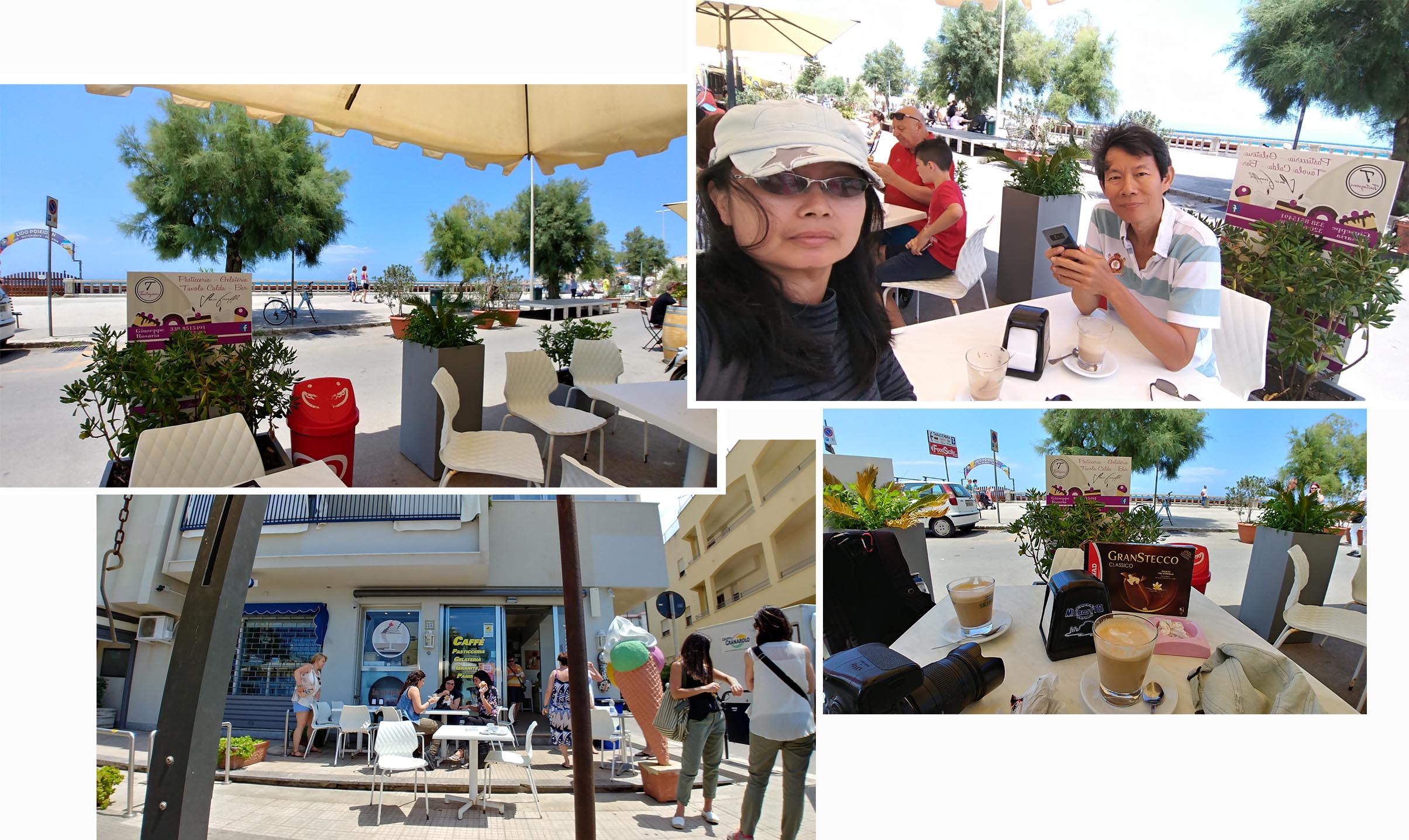 Coffee and icecream at the beach

Our original intention was just a coffee break at the beach and then to drive on to Milazzo. We did not expect to see much of the beach. But having reached the beach we found that it was so much more beautiful than our expectation. The bay was wide and flat, the sand was clean and whitish gold, the sky was brilliantly blue and the sea was turquoise color with white waves sweeping in. 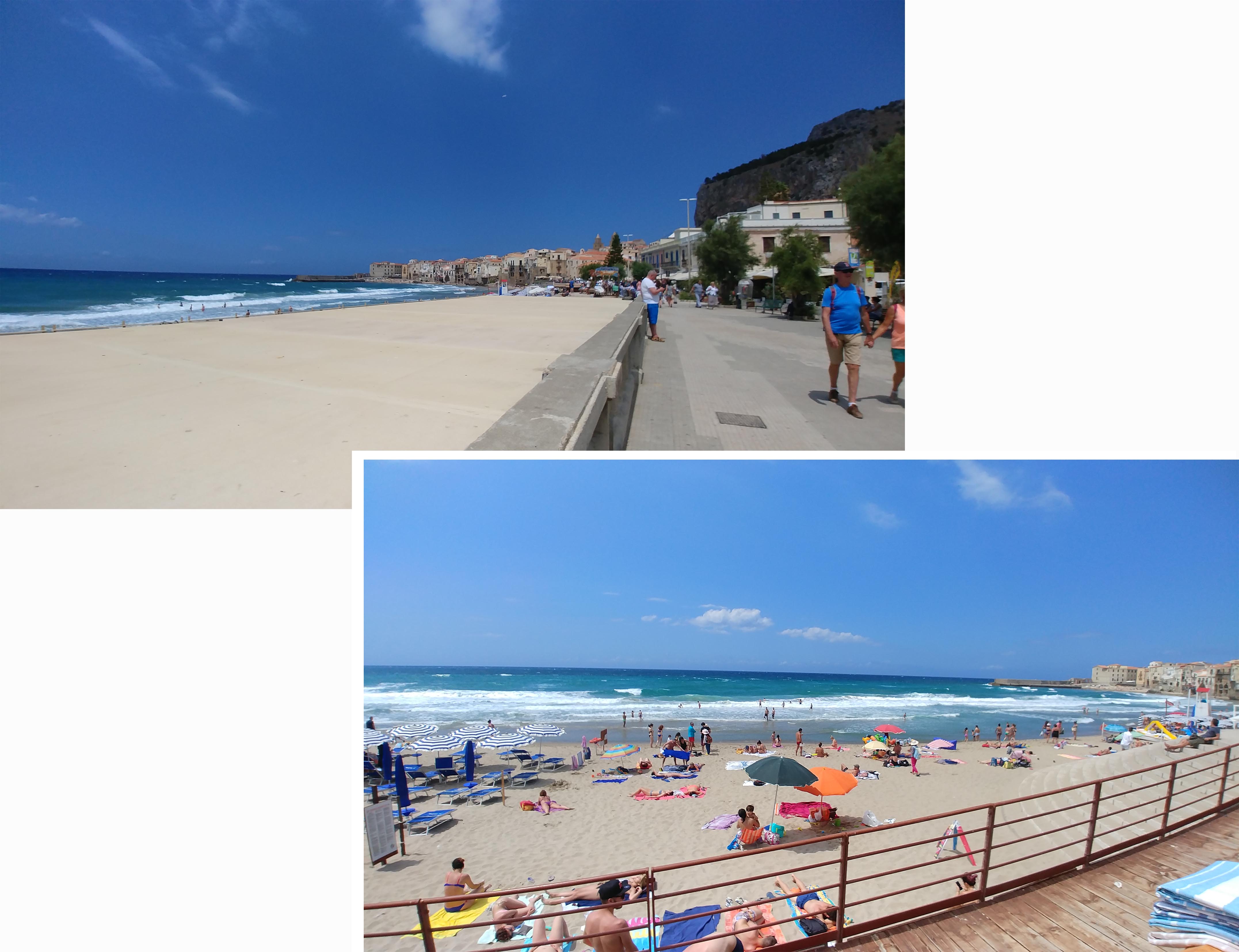 There were many people sunbathing on the beach and others playing in the water.  It was definitely a wonderful and beautiful day for beach goers. Standing on the beach we could see from far, on the right side of the bay, the town houses of Cefalu. They looked stunning against the sky and the sea. 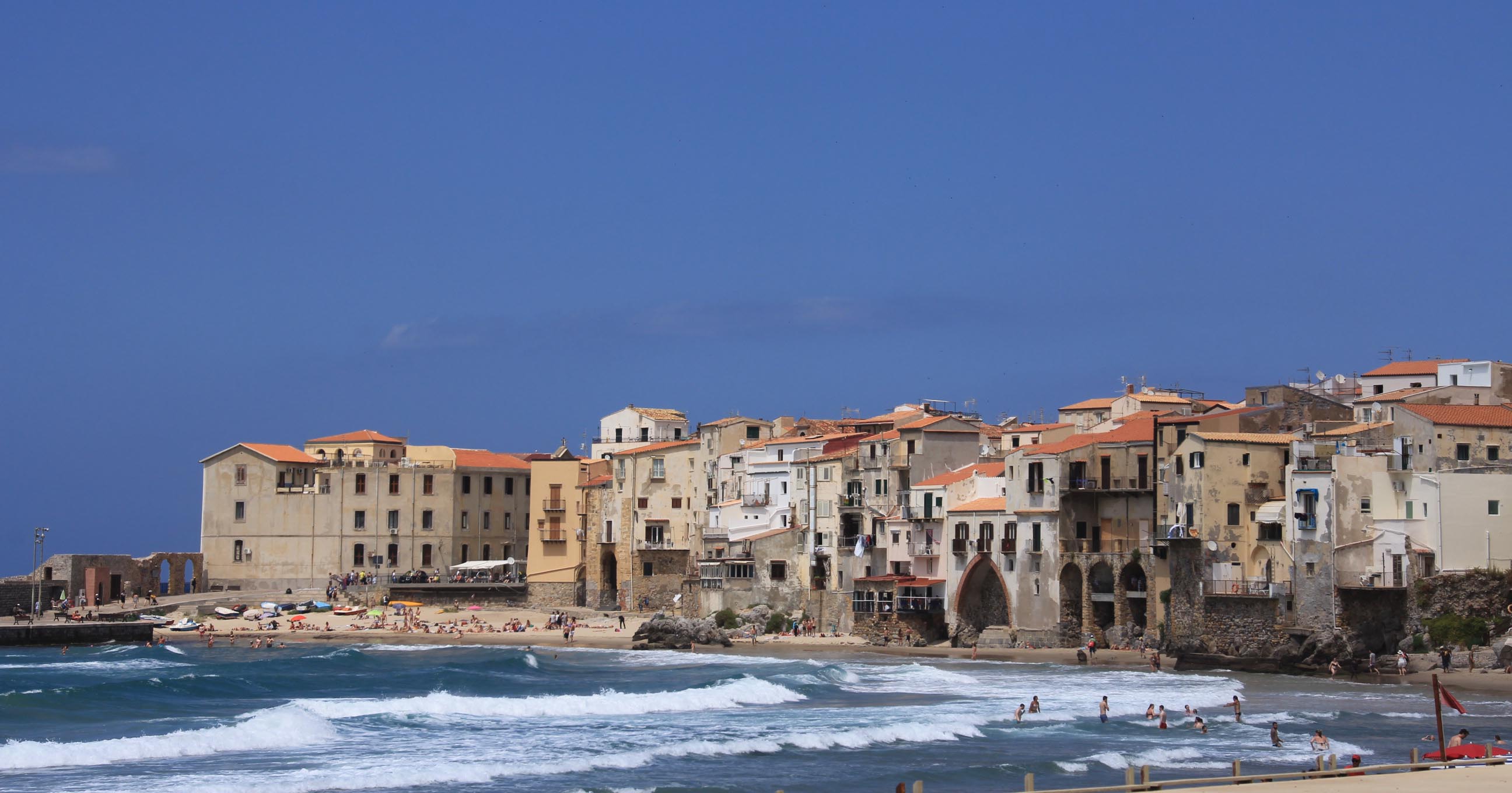 From the beach we strolled on till we reached the town. The row of houses at the edge of the beach had many sections where they allowed visitors to go nearer to the water edge to view the sea/beach. So everytime when there was a sea viewpont we would walk out/up to admire the sea view.

Our walk brought us into the streets of the inner town. It was very pleasant to stroll down the streets and alleys. Unlike the beach area the town was very quiet. The town houses were mainly three storey apartments and most were painted in pastel yellow color. The alleys were more quaint than the streets, they were narrower and had more characters. I loved the way the sun rays struck the wall of the houses at an angle. 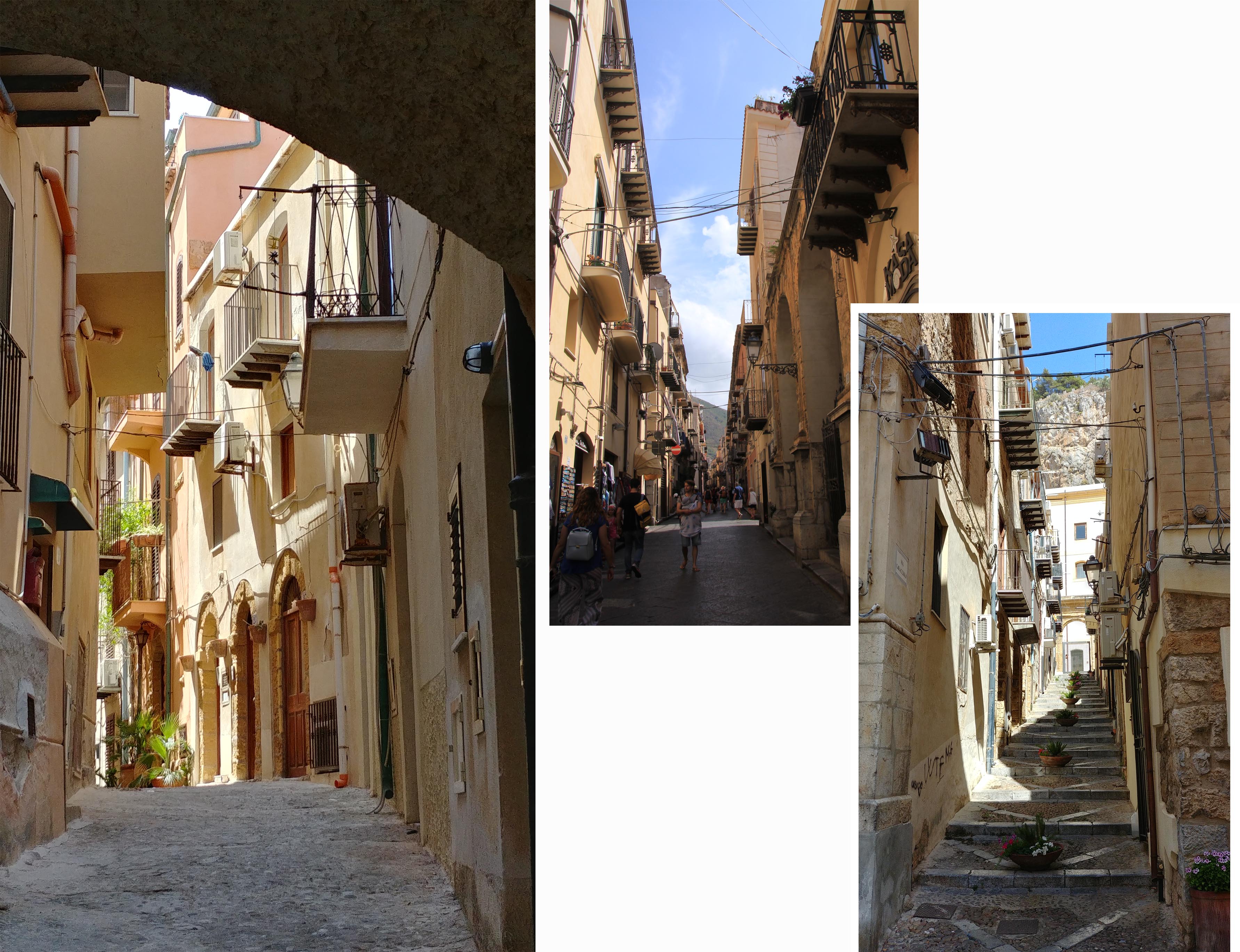 Streets and Alleys of Cefalu town

Our last destination in Cefalu was the Cathedral of Cefalu. This cathedral was another UNESCO World Heritage Site. 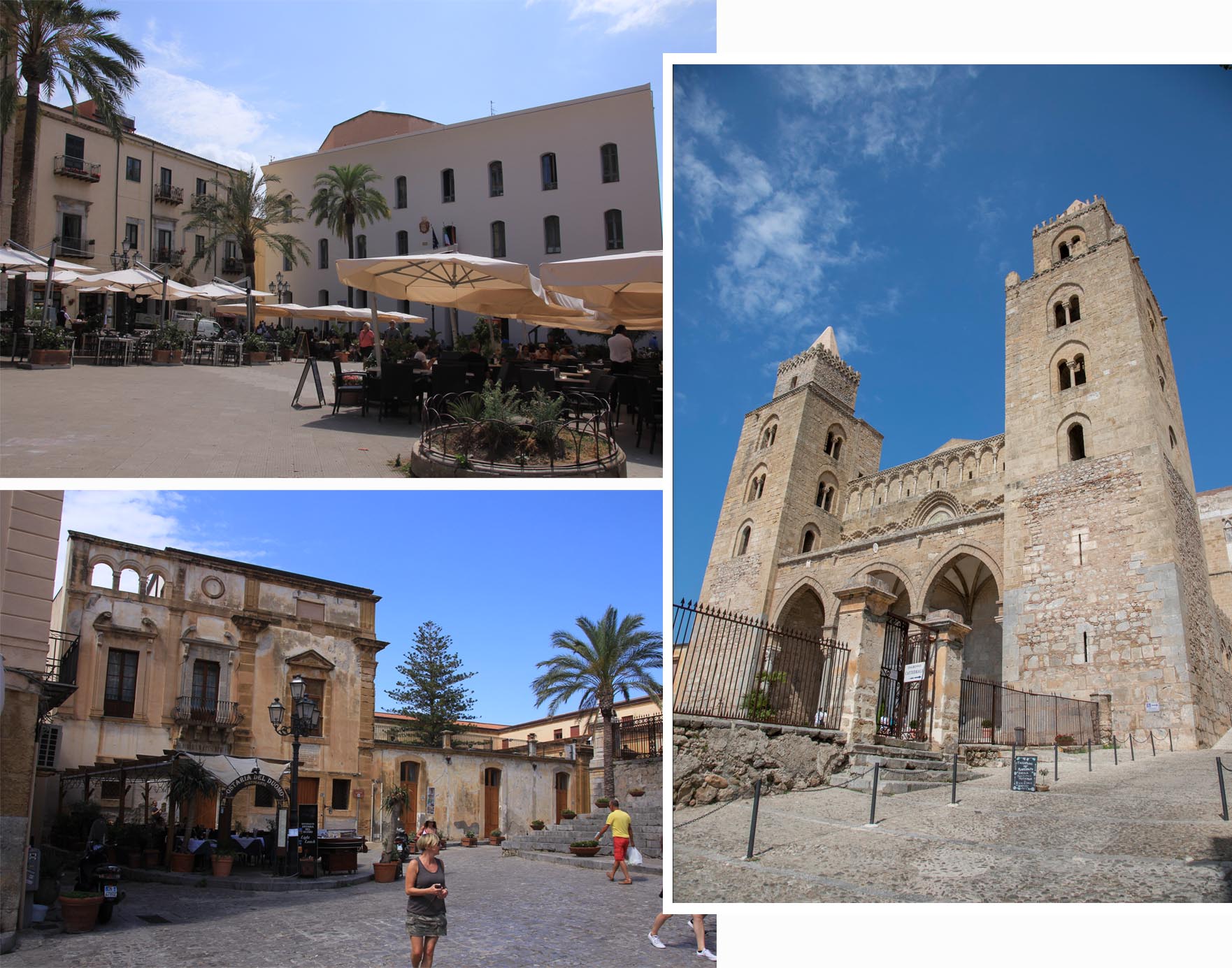 At about 4.30 pm we left Cefalu and reached our stay at Milazzo at about 6.00 pm. Just at the outskirt of town we stopped at a huge Lidl supermarket to pick up some fresh food – salmon, ham, pasta (for tonight dinner and tomorrow breakfast) as our stay at Milazzo came with cooking facilities. 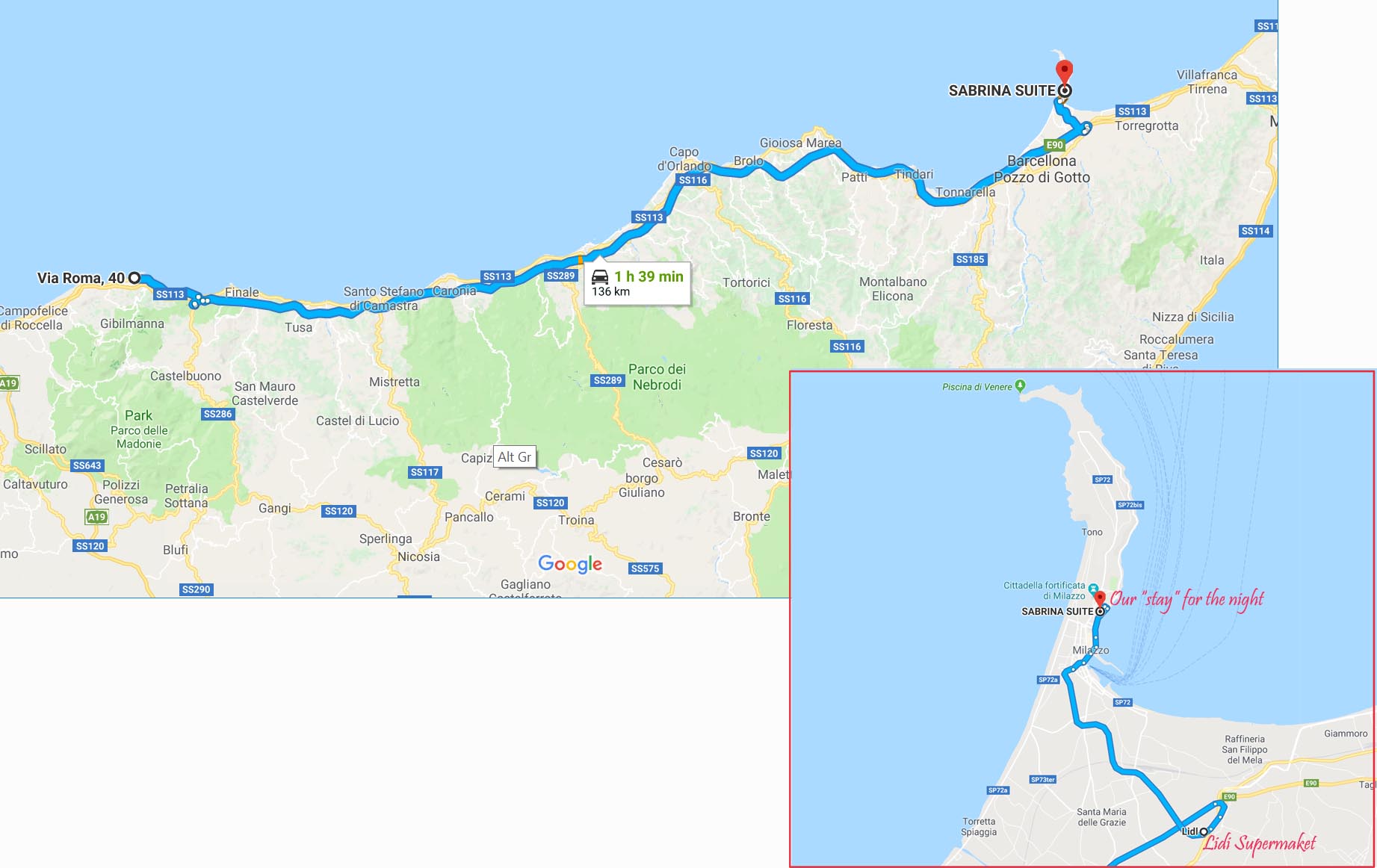 Route from Cefalu to Milazzo

We picked Milazzo to stop for a night as it seemed like a nice place to stop, eat and rest. It was another seaside town with a harbour and about 1.5 hour drive from Cefalu. We figured that by the time we reached Milazzo it would be near to 6 pm and by then we it would be about 8 hours since we started out in the morning.

We we could we would preferred to cook our own meal than to eat at a restaurant. Firstly we could pick the food we liked, secondly we did not have to go out to search for a restaurant, thirdly it was definitely more value for money. For dinner we had salmon with cherry tomatoes and onion, omelete with ham, lettuces, strawberry and orange. 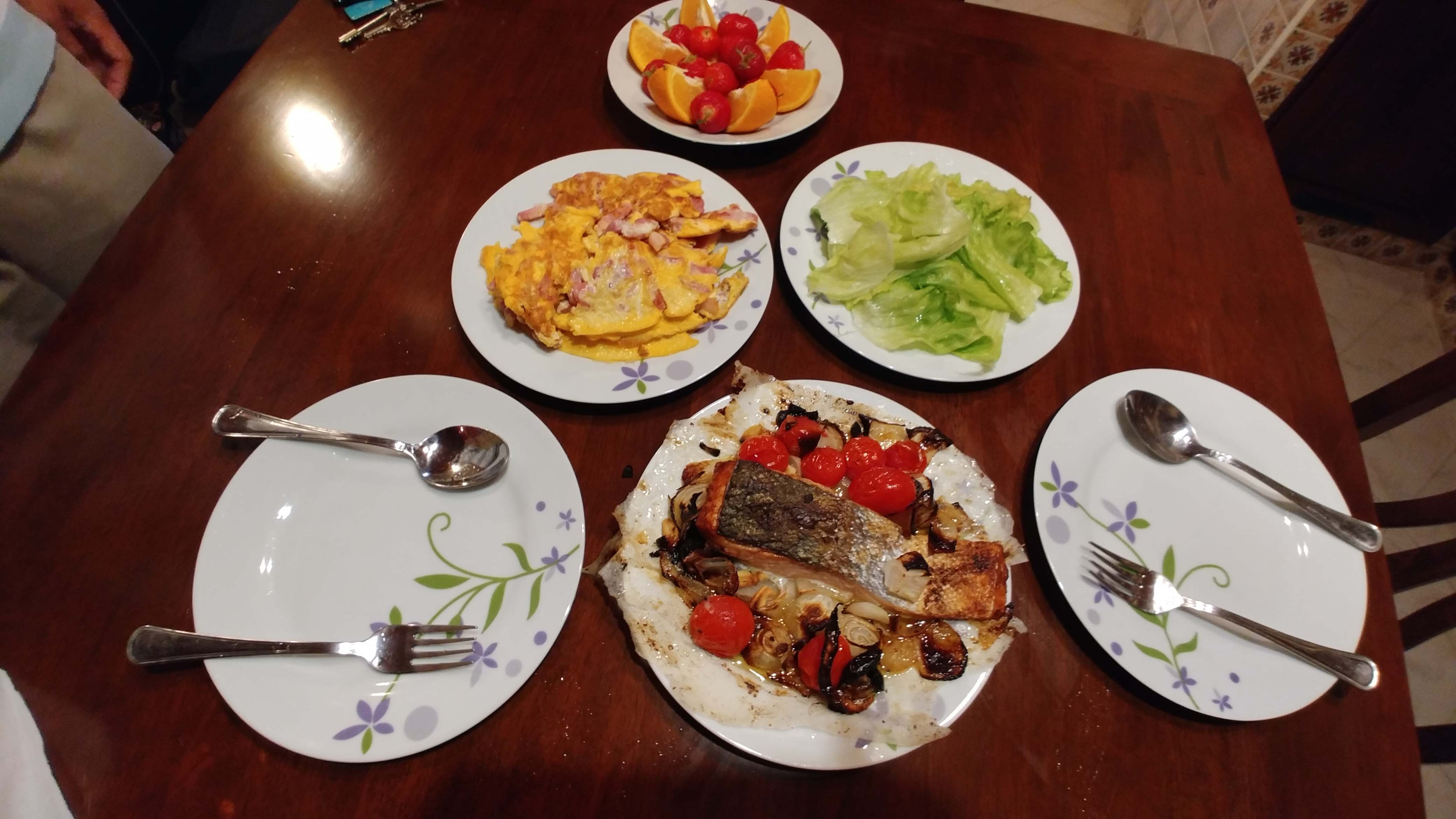 Then it was an “after-meal” stroll at the Milazzo promenade and hopefully we could find a nice cafe for some dessert. From our stay it was only about 100 metres to the jetty. At the jetty we saw many yachts and pleasure boats moored by the dock. 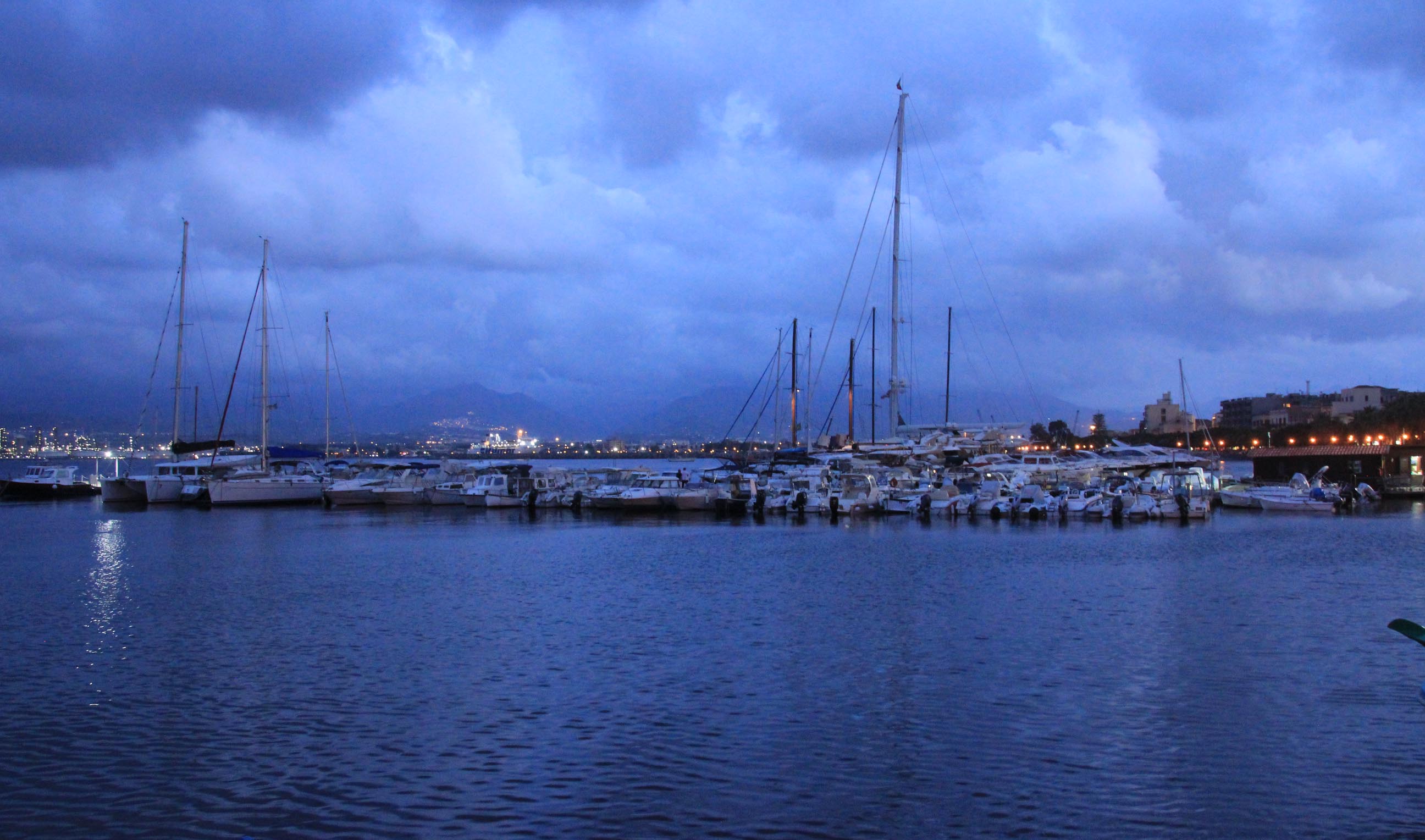 The harbour promenade was quiet and there were not many people out strolling about. The promenade was wide and the seaview was beautiful. We strolled on for quite a distance marvelling at the serenity of the place.  Sadly we did not find a place to satisfy our “desert craving” as there was no desert shop around. We saw a couple of restaurants but there were serving meals only. 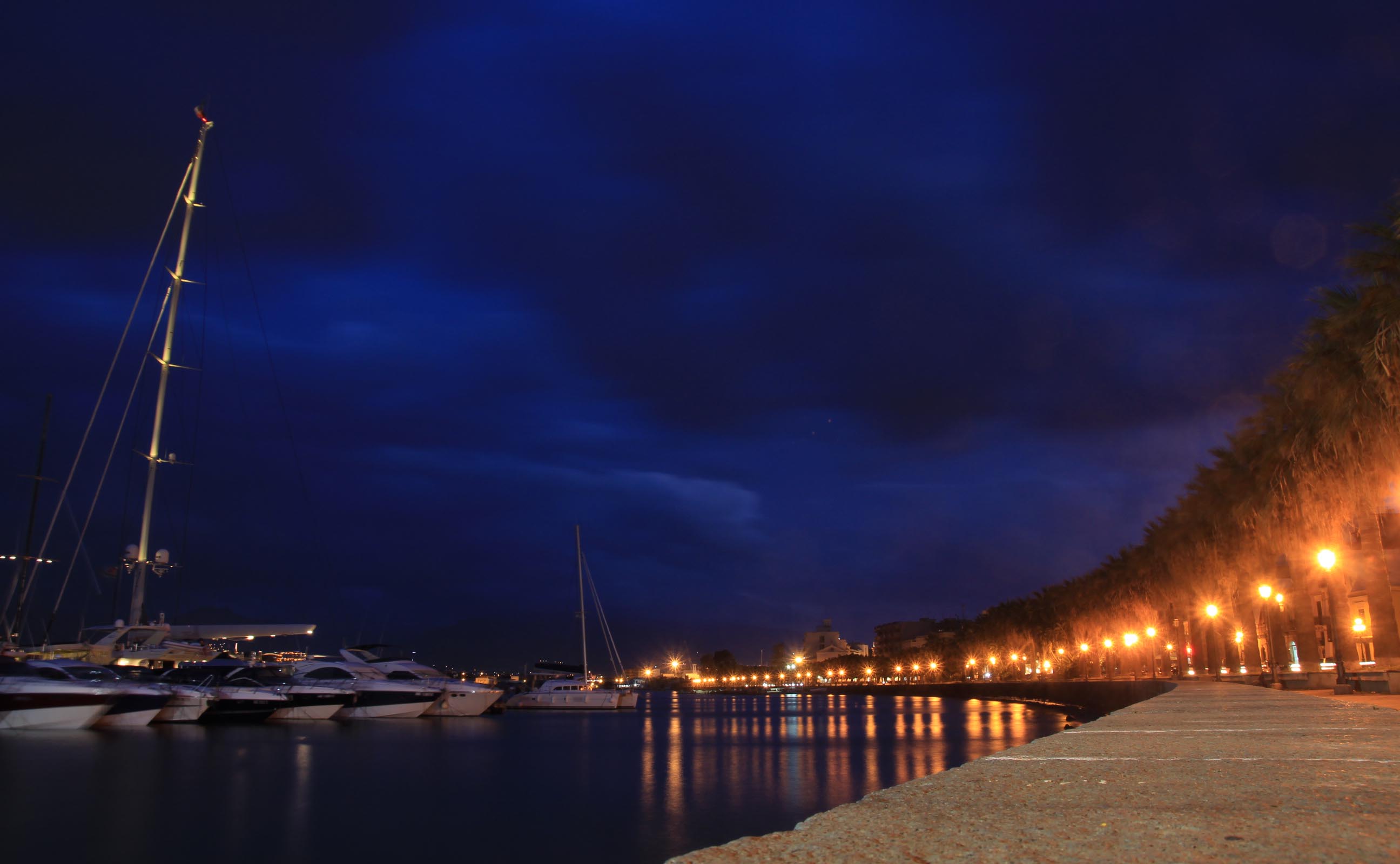 Our accommodation in Milazzo

We booked “Sabrina Suite” for €37 from booking.com. It was a great price as it was a small studio apartment with cooking facilities, ensuite toilet, double bed and free parking practically at doorstep. I especially like the kitchen it was a proper kitchen with hob and hood. 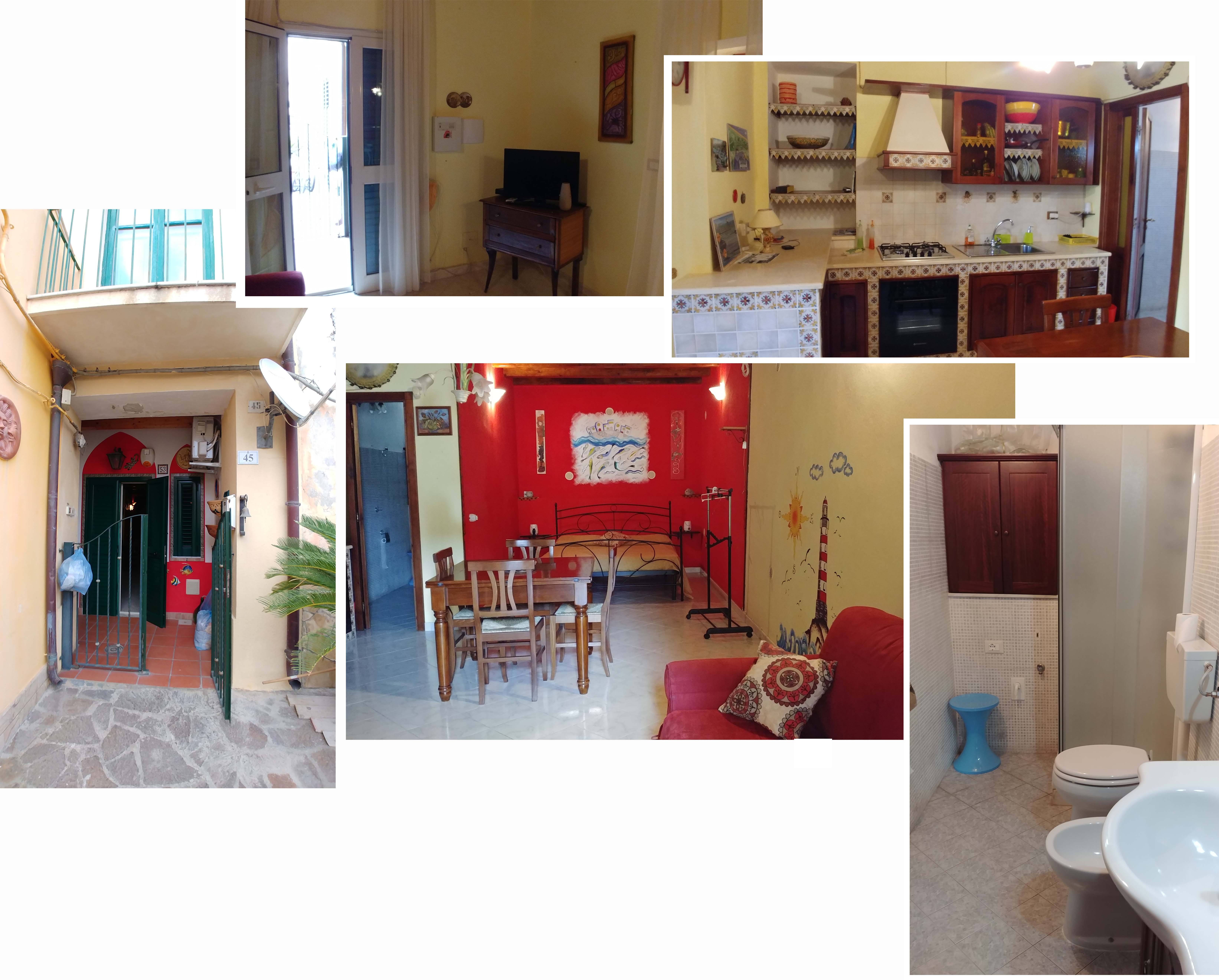 Our apartment at Sabrina Suite

The next day we went for a walk at Cape Milazzo. We knew that there was a cape at Milazzo but did not think of visiting it until our host told us that it would be a nice place to visit in the morning if we were not in a rush.

We drove for about 6 km towards the cape . Near the end there was a restaurant, Faro II, and in front of it was a huge car park. We parked our car and started our walk toward the end of the cape from the carpark. 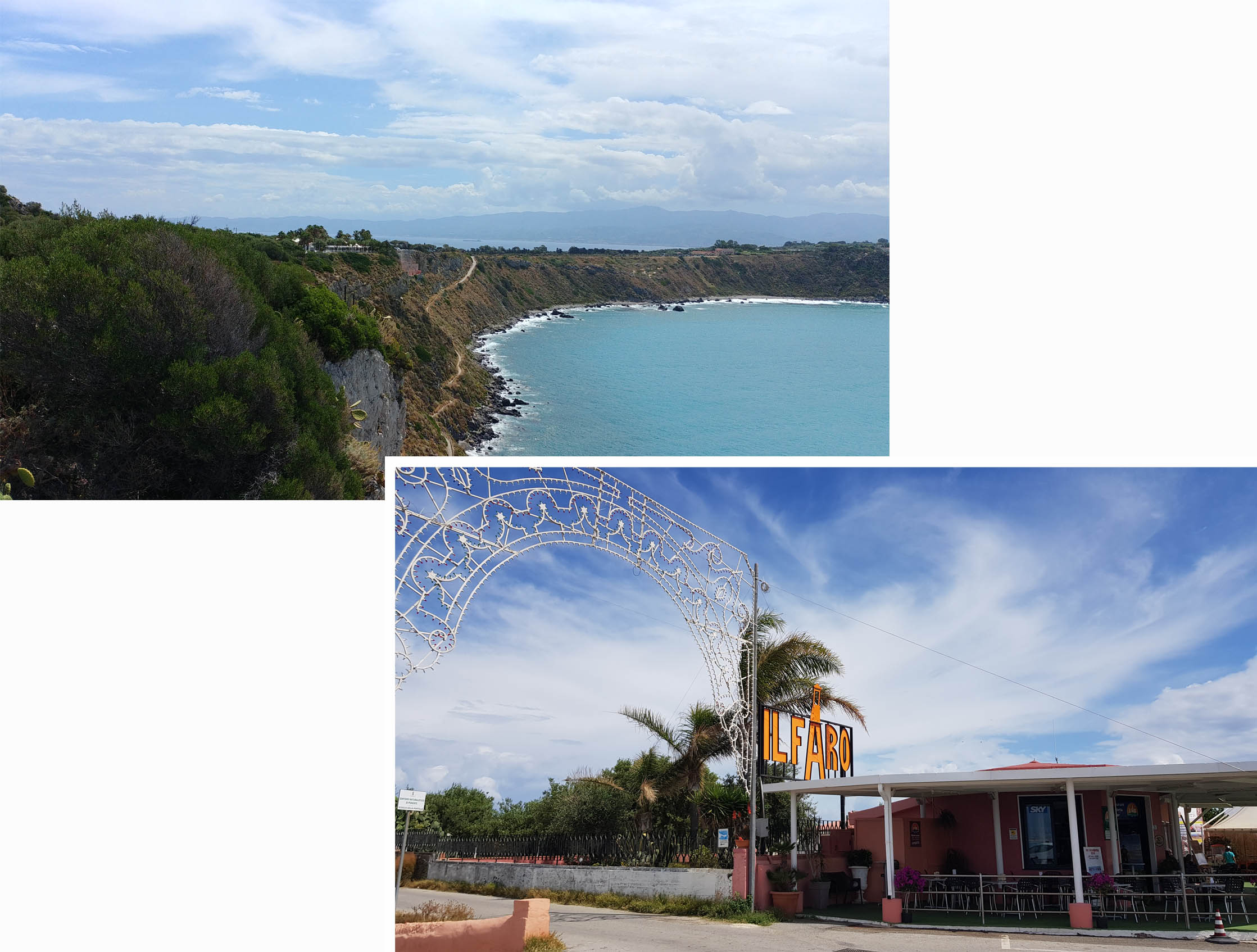 Restaurant Faro II and a carpark at Milazzo Cape

The first 500 meters was on relatively flat land, we passed a camper park, walked through a big space/ground with with olive trees. Then we reached some steps. The walk was no longer on flat land there were some steep climbing up and down. 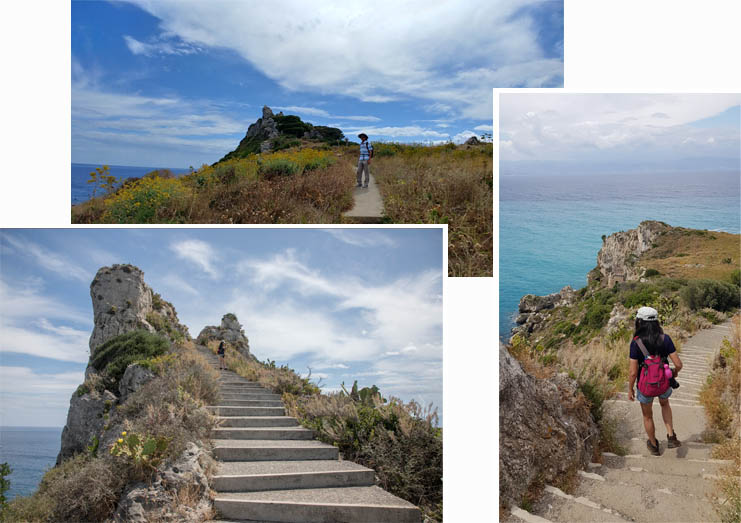 Steps and steps to the cape?

Along the way there were some very scenic views of the sea and looking back we could see the long stretch of land that led to the cape. Impressive. 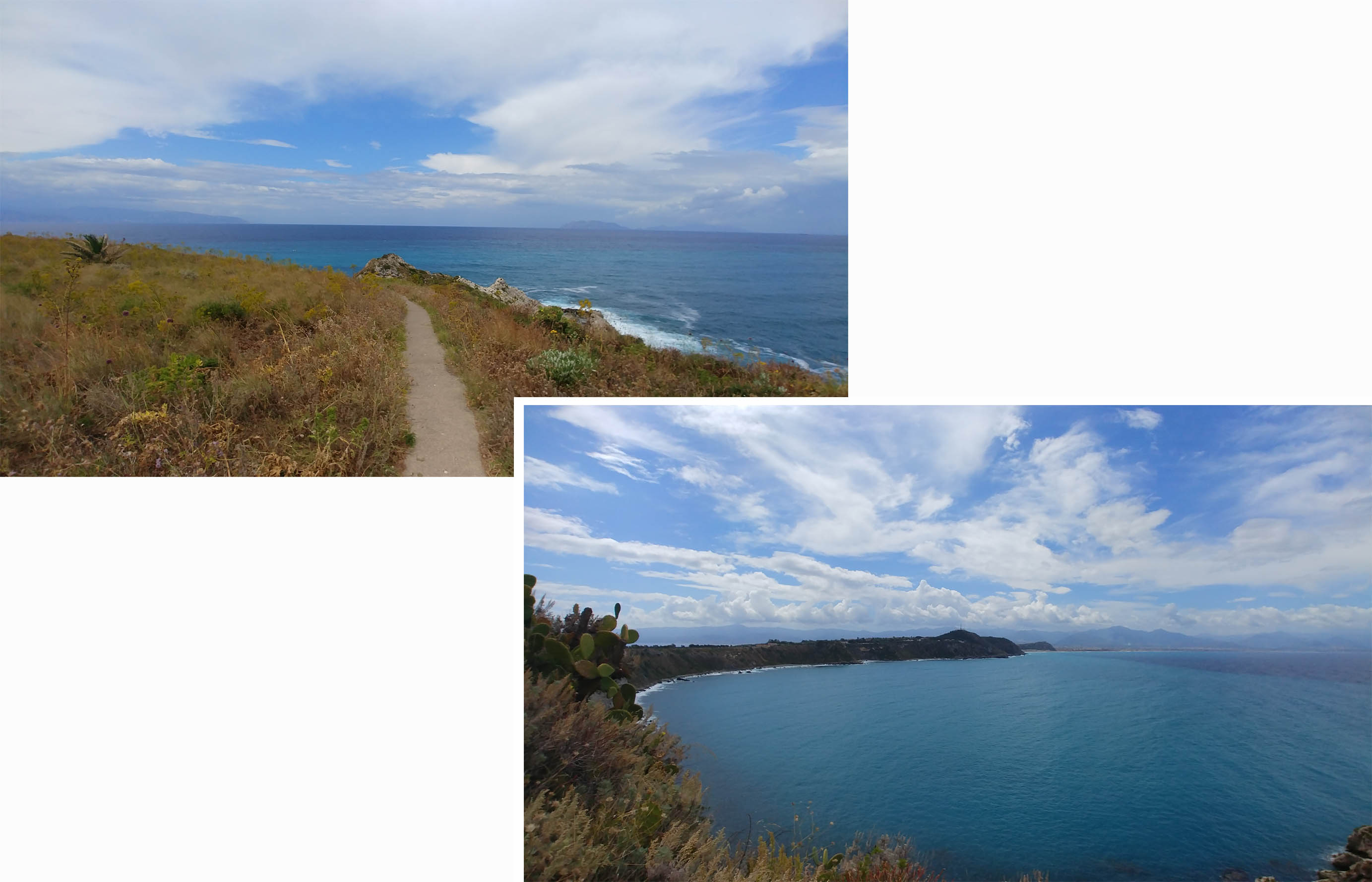 Walking route to the cape

We did not know where was the end point. We just followed the path hopefully that it would lead us somewhere. Occassionally we would see a sign board and the most interesting destination listed on it was “Laghetto di Venere”, Venus Lagoon. 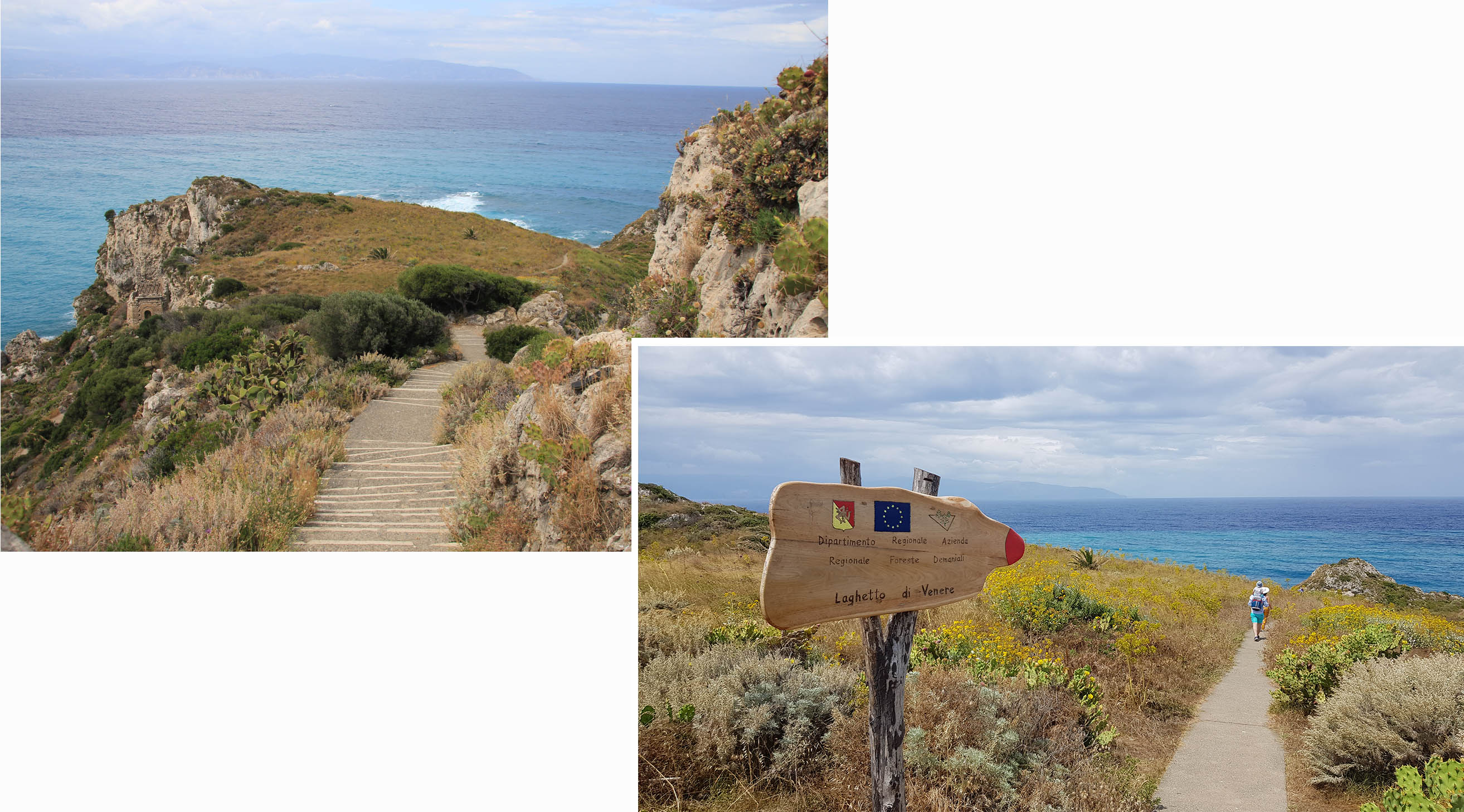 Laghetto Venere or Venus Lagoon was a nature-created pool just by the sea. It was round in shape with natural reef barrier separating it from the “wild” waves of the sea. A beautiful natural pool for visitors who like to swim. A couple of visitors actually came to swim in the lagoon and while we were on our way out we saw more visitors coming in.

It was a nice and pleasant walk. A good “after breakfast” walk. By the time we were done with Milazzo Cape it was close to afternoon.