Our plan for the day was to drive 300 km for about 3 hour and 30 minutes to one of the smallest states in Europe, San Marino. We would be staying a night in San Marino. 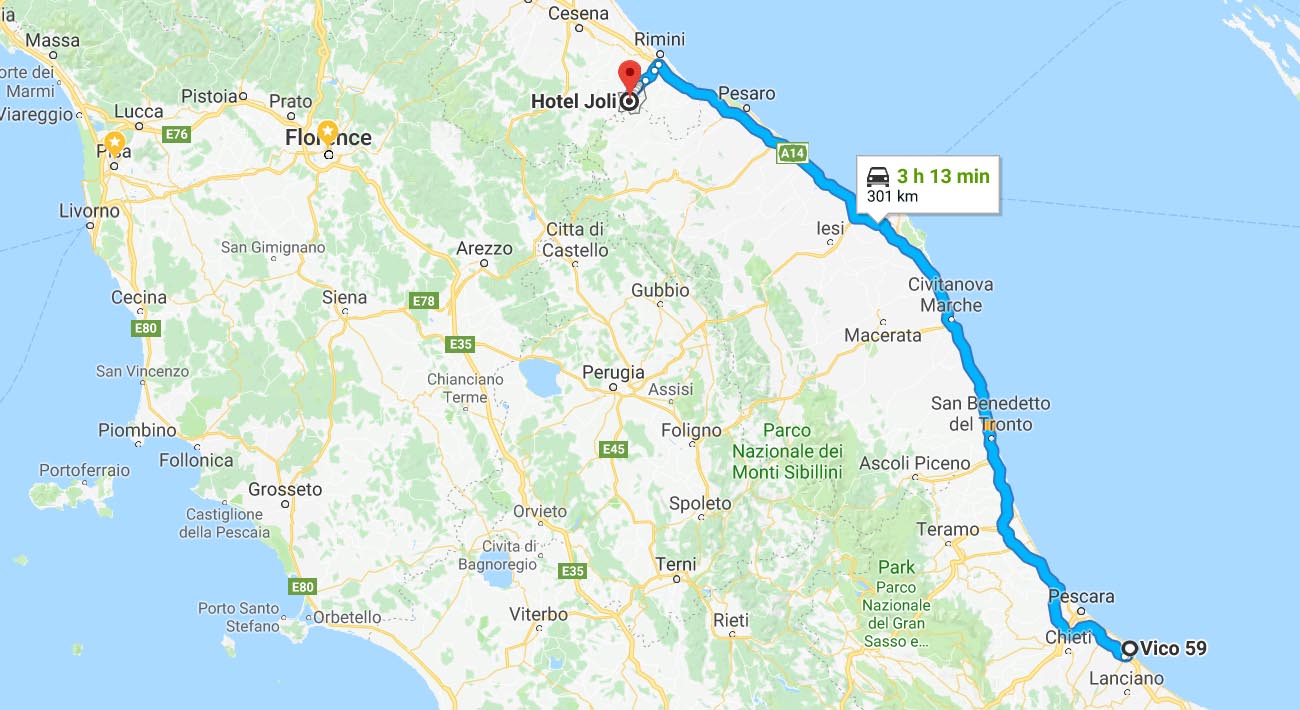 By the end of the day
San Marino was so much more scenic and beautiful than our expectation! The landscape was awesome, the sunset was stunning and the towers were magnificient!

The drive from Ortona to San Marino took about three hours. We left Voco 59 at about 11 am and took a slow drive to San Marino, by the time we reached our hotel at San Marino it was about 2.30 pm. From our hotel room we had a fantastic view of the San Marino.

San Marino as viewed from our hotel room

The actual name of San Marino was Republic of San Marino. It was an enslaved state totally surrounding by Italy. San Marino was one of the smallest states in the world with a total area of 61 square meters. San Marino sat on the ridge of Mount Titano and all around it was splendid landscape that stretched many kilometers and beyond. 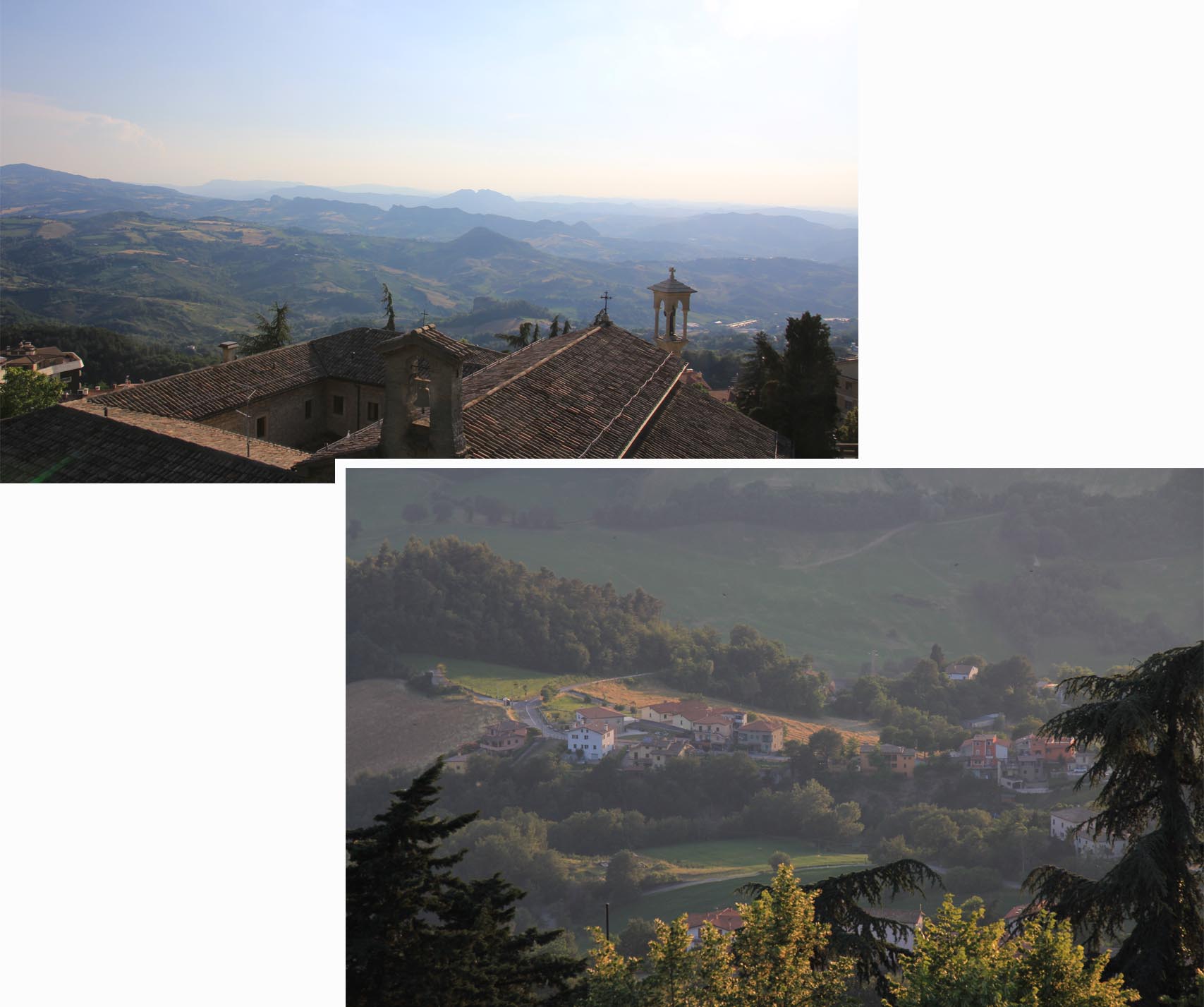 One of the main attractions of San Marino was its famous three defence towers which was built on the three peaks of Mount Titano.  During our visit we only managed to explore two of the towers.

From our hotel we drove up a windy road to a upper carpark. From there we walked further uphill and caught sight of a tower, it was Torre Cesta. Torre Cesta was built on the highest peak of Monte Titano. 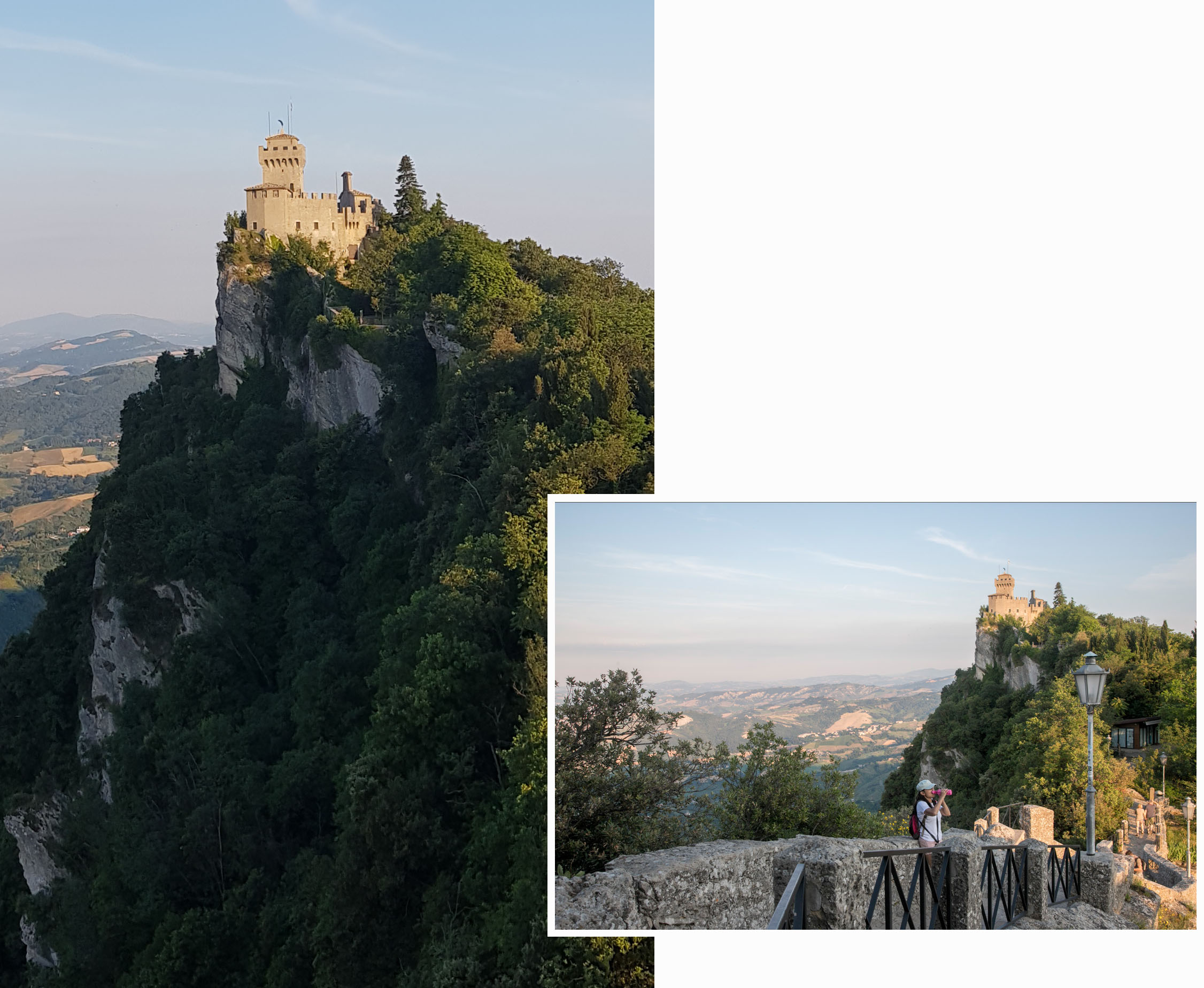 From Castle Cesta we saw another tower on another cliff/peak of Monte Titano, it was Torre Guaita. Torre Guaita was the oldest of the three towers and the most famous. It was built in the 11th century and for a short while was used as a prison. 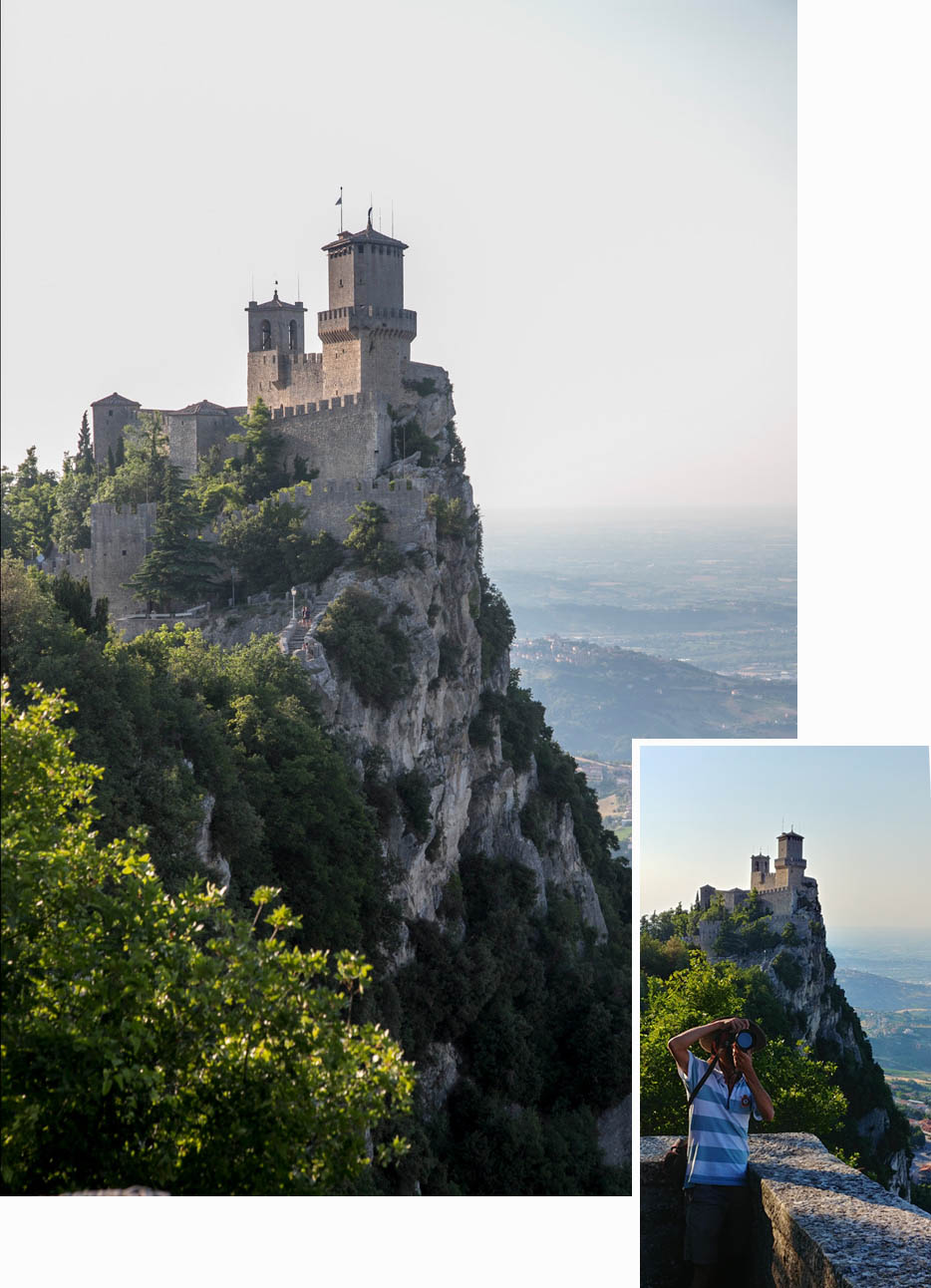 We walked from Castle Cesta to Torre Guaita, the distance was not too long just about 500 meters. To reach the tower we had to trek up a set of stone steps that was built along a cliff. The view of the valley landscape from the steps was beautiful. 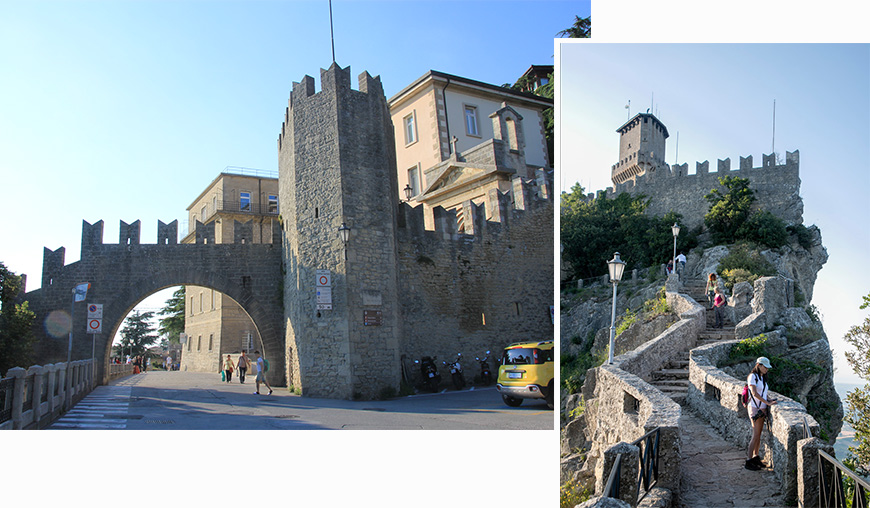 Walking to the Torre Guaita 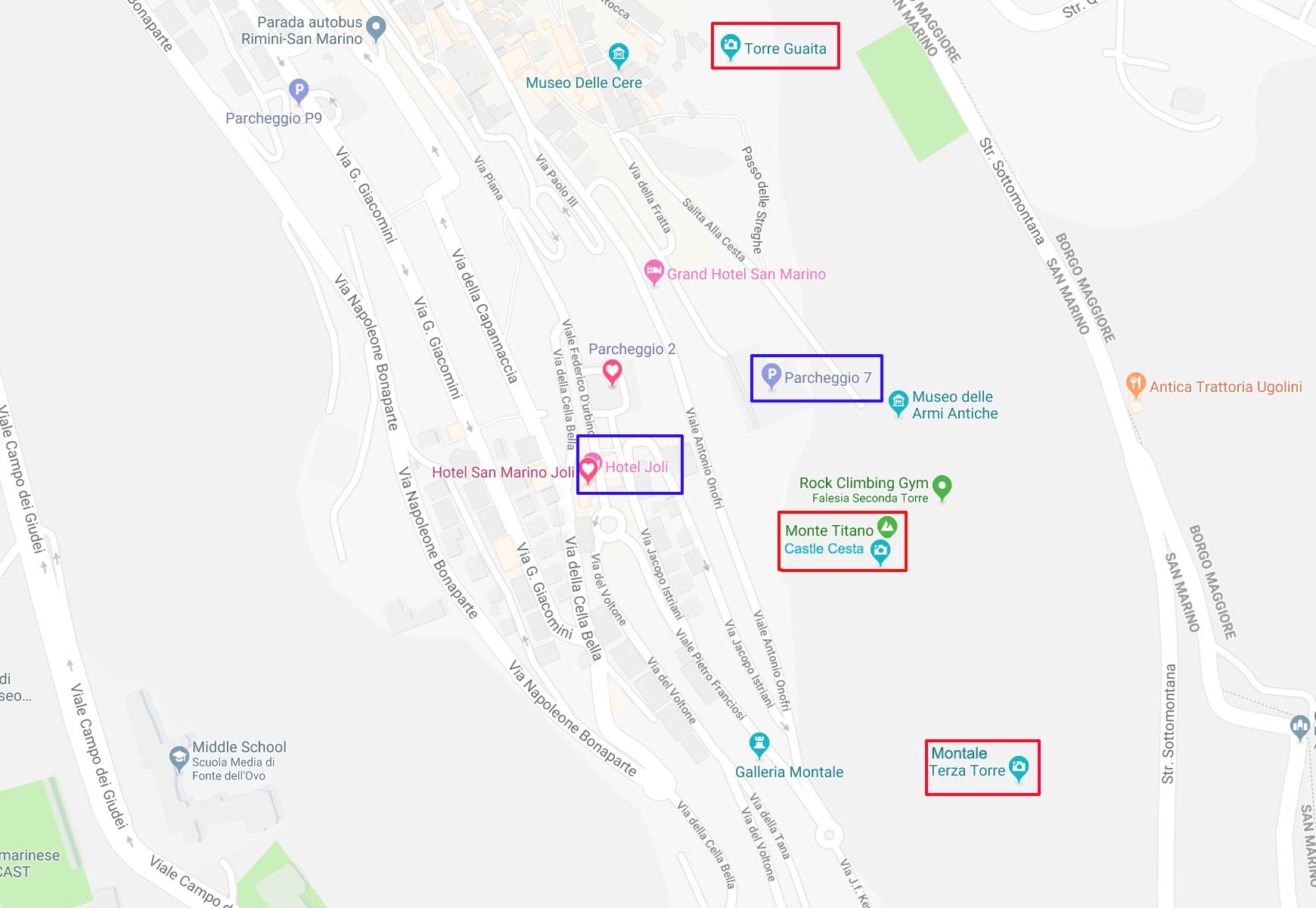 San Marino near the three towers

So a walk back to Castle Cesta to  search for a route to Terza Torre might not yield any result. It was late and the time was close to 8 pm so we decided to skip the third tower. We rather stayed put near the arch entrance of Torre Guaita to enjoy the glorious sun set. 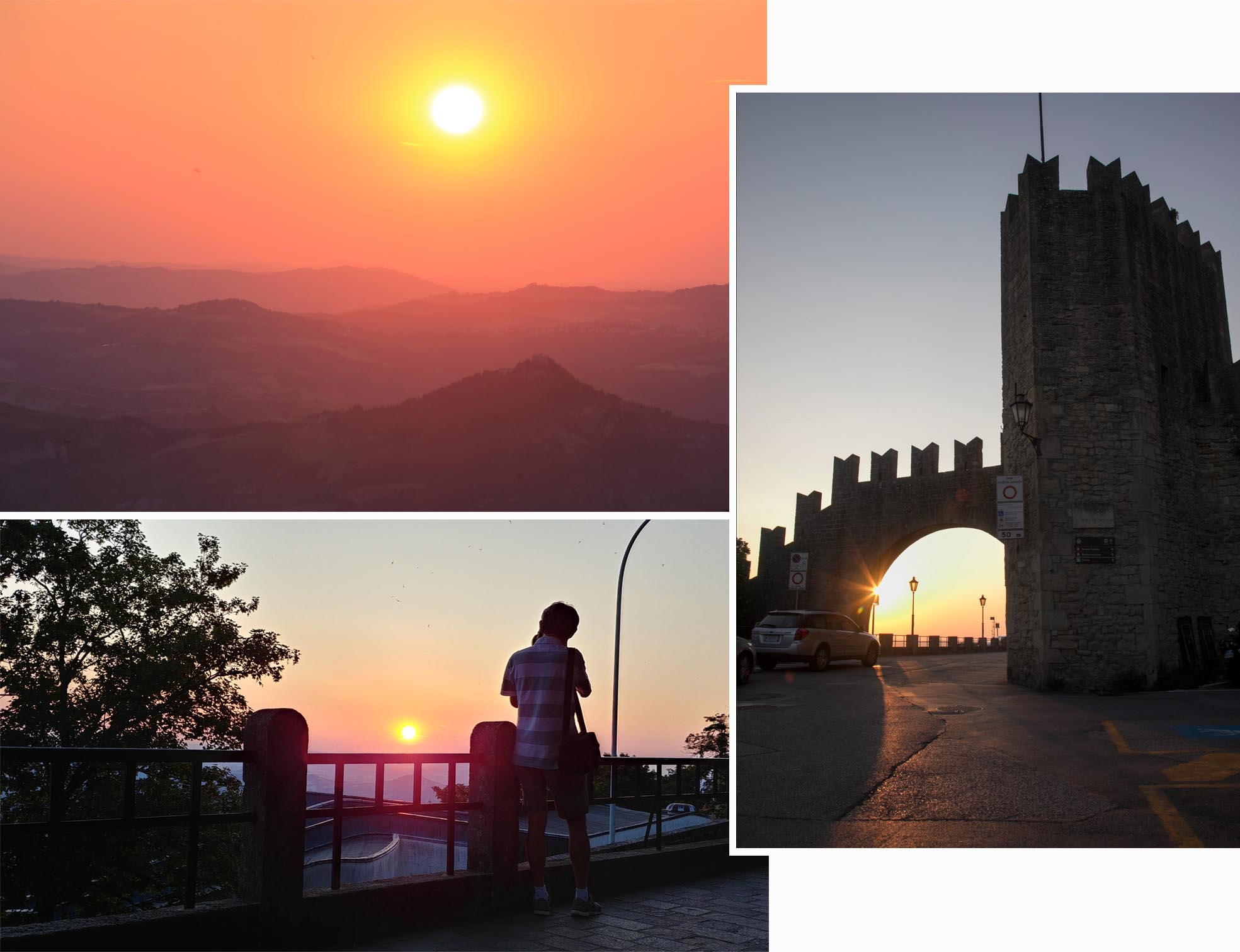 We were back to our hotel room after eating dinner at a restaurant near nearby.  Even at 9.15 pm the view outside our room window was still breathtakingly awesome. 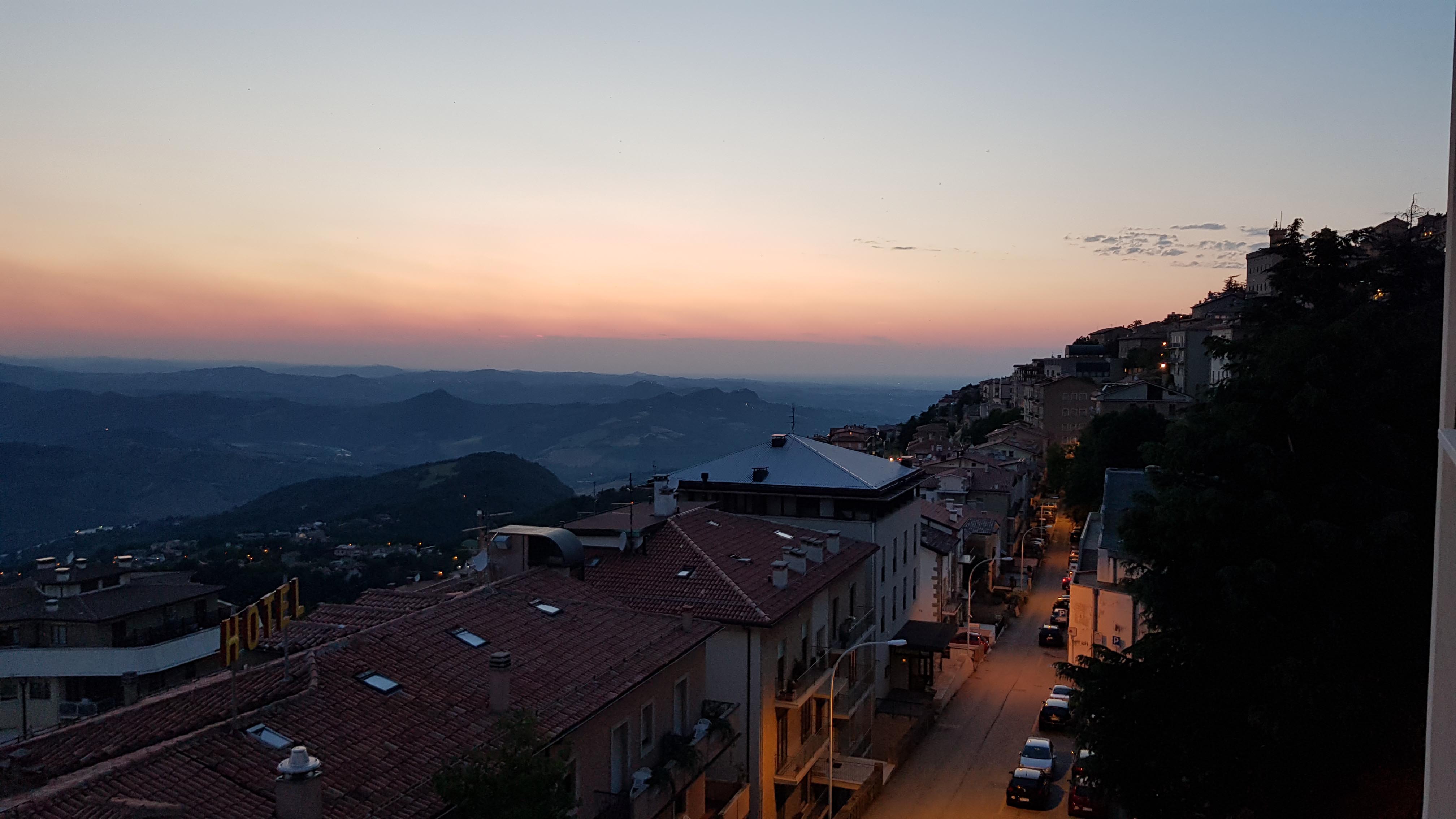 We booked our double room at Hotel Joli from booking.com. For one night the cost was €70. Included in the room package was breakfast and a double room with valley view. The hotel sold us a discounted parking ticket at €4 for 24 hour at a nearby paid parking. 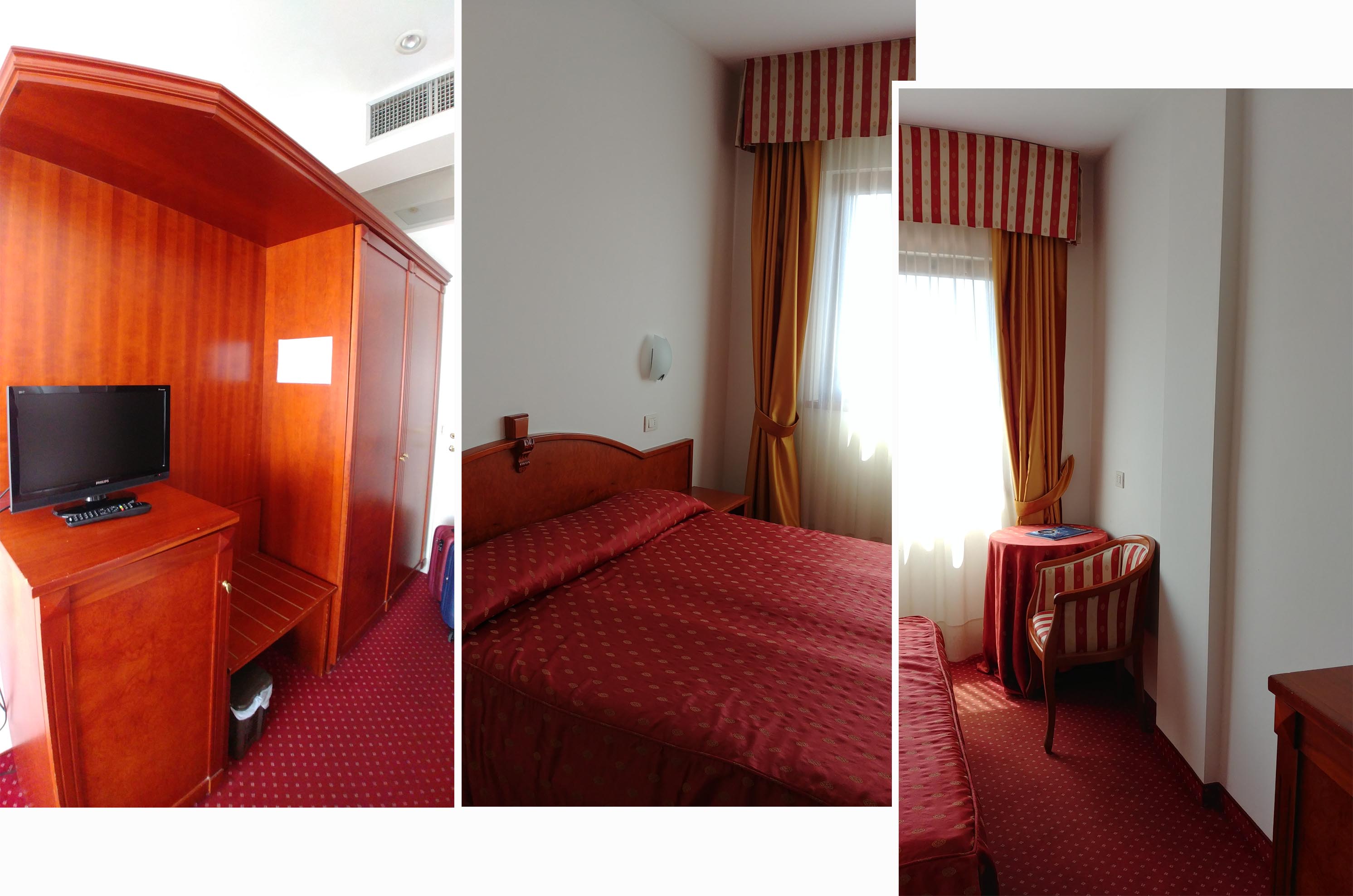 Our double room at Hotel Joli 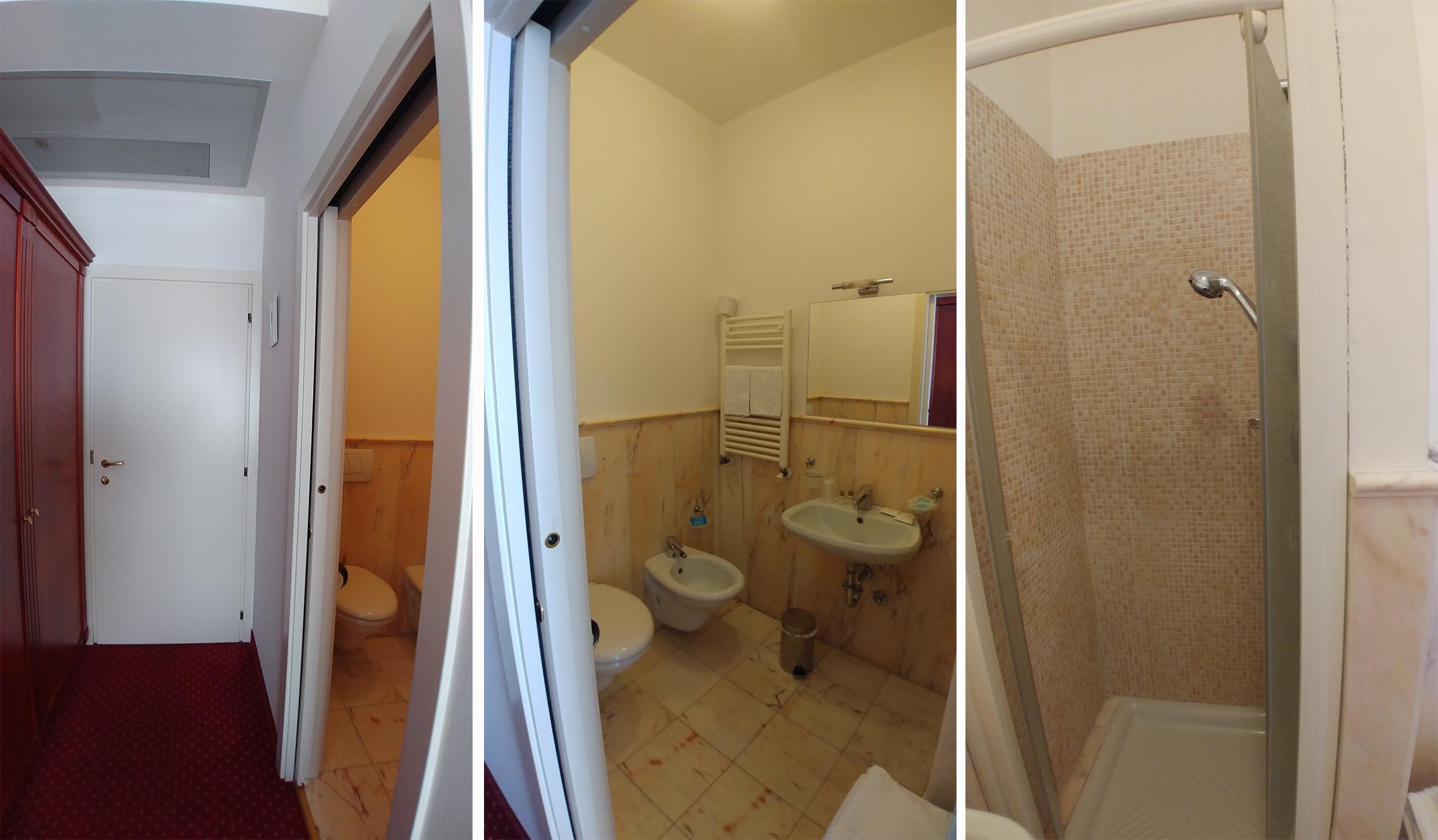 Ensuite Toilet in our Room

The breakfast spread was pretty good. It had more food variety than the standard Italian breakfast fare. 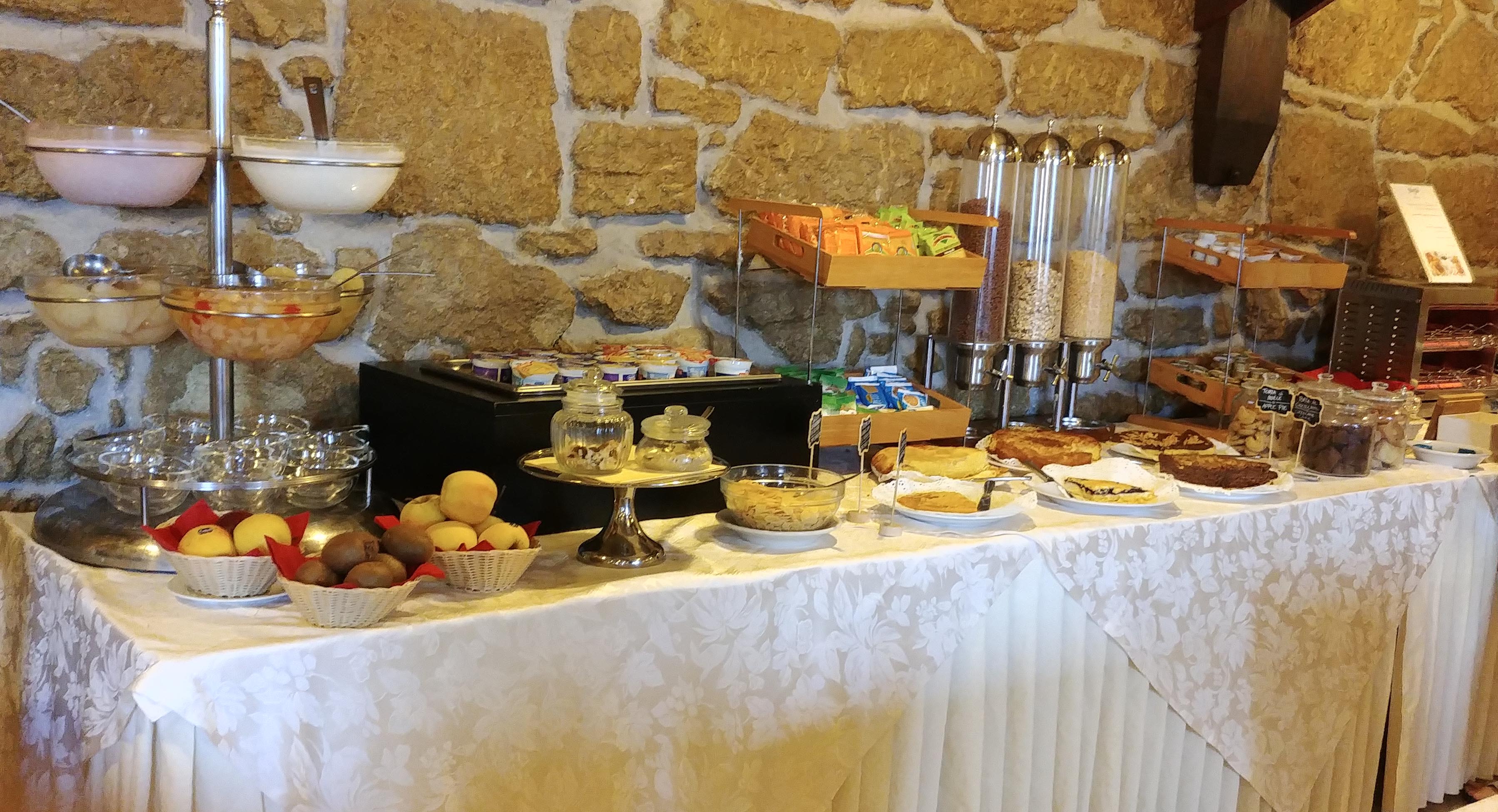 The best part of staying at Hotel Joli was the view from our room. We were glad we paid more for a room with a view! 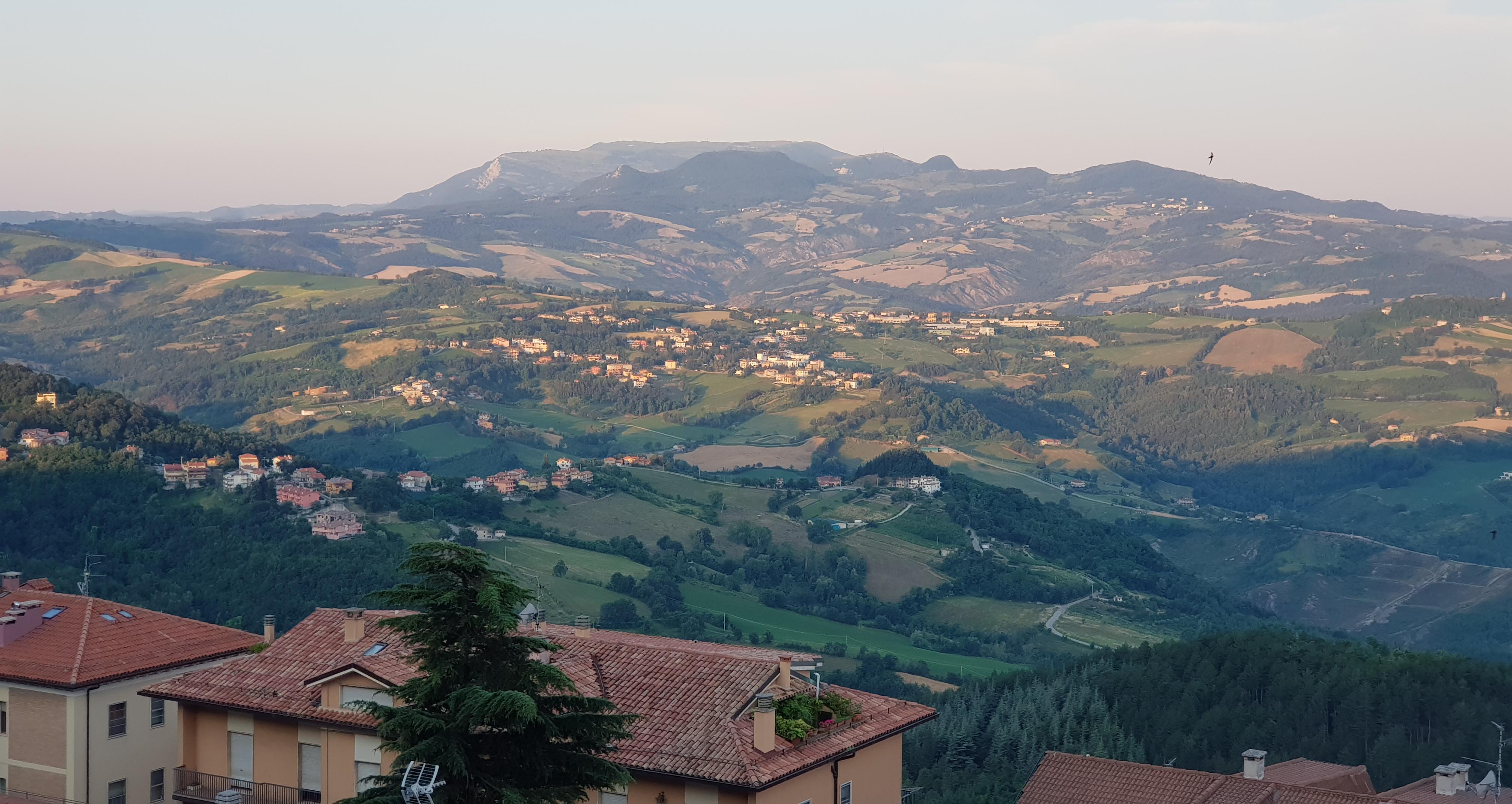 View from our room at 8 am