We planned to drive to Tasch, a town just outside Zermatt where we would leave our car overnight while we went into Zermatt via a shuttle train. We planned to hike the 5-Seenweg trail which would bring us pass 5 lakes and from three of these lakes if we were lucky we would be able to see the reflection of Matterhorn in the lakes. 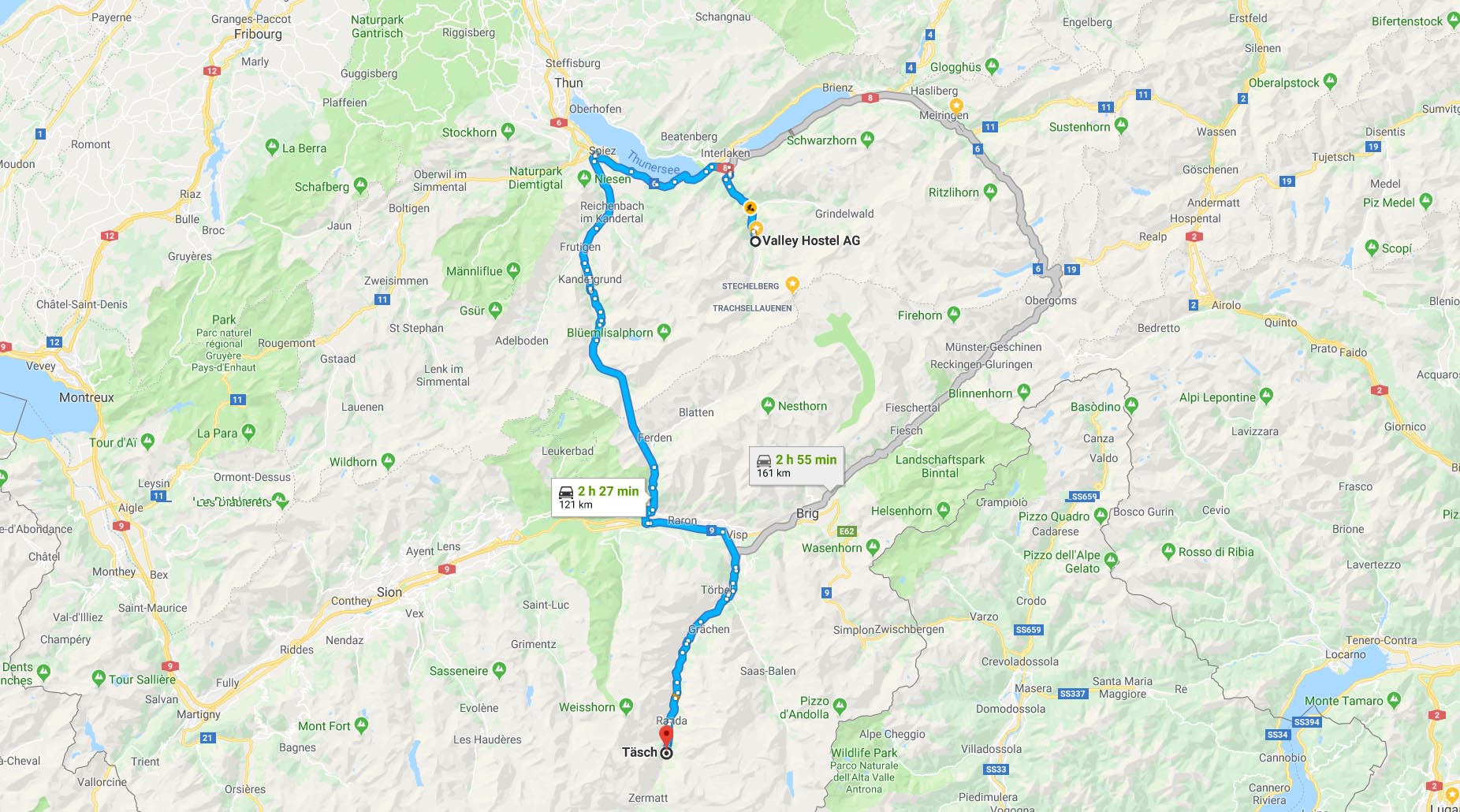 By end of the day
There was two routes to Tasch and we chose the shorter and faster route. We did not know that this route involved going onto a rail transport and we had to pay CHF27 for the rail transfer. If we had gone by the other route we would not need to pay CH27 but the journey would be 30 minutes and 40 km longer.

Matterhorn the highlight of our Zermatt trip was hidden by cloud on our first day. We were luckier on the second day and managed to see Matterhorn. The 5-Seenweg walk (Five Lakes walk) was nice and we had a great time.

On our way to Tasch to zermatt

We thought we would drive all the way to Tasch but was surprised that mid way about 54 km into our journey we were stopped at a gantry and told to purchase a ticket to carry on. We showed the staff our Swiss Vignette (CHF 40) that allowed us to travel freely on highway for a year, but was told that we still had to purchase the ticket We checked if there was an alternative way to Tasch and was told that the other way would take us another 5 hours to arrive at destination. 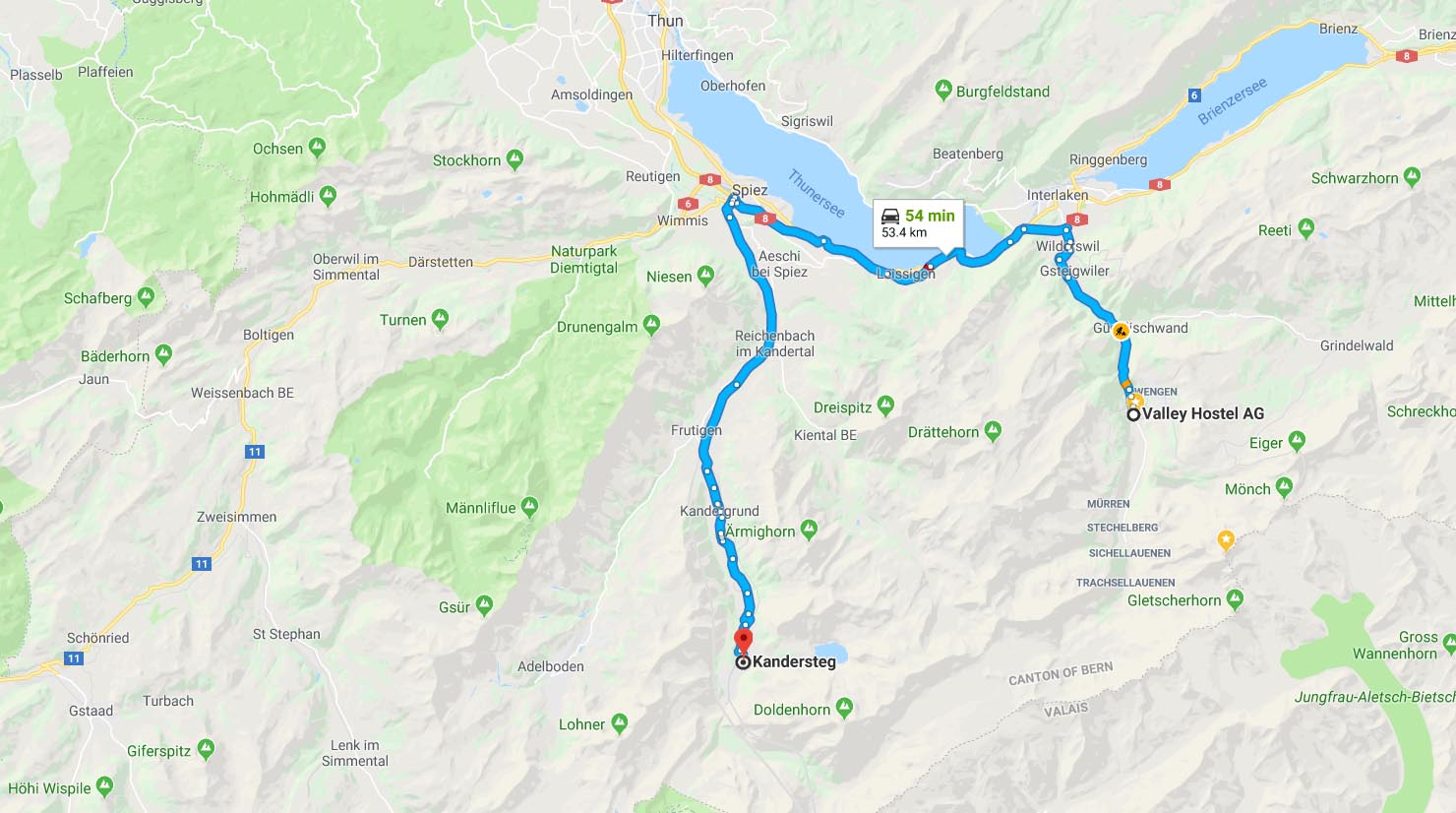 Route from Valley Hostel to start of Lotschberg tunnel

We soon found out that the ticket was our passage on a train! When we planned our route on google map we did not go into the smaller details. Apparently a section on the route needed the car and us to be loaded onto a train and we would be transferred through the Lotschberg Tunnel. The Lotschberg Tunnel was about 14.5 km long, it was a railway tunnel that connected Kandersteg town ton Goppenstein town. 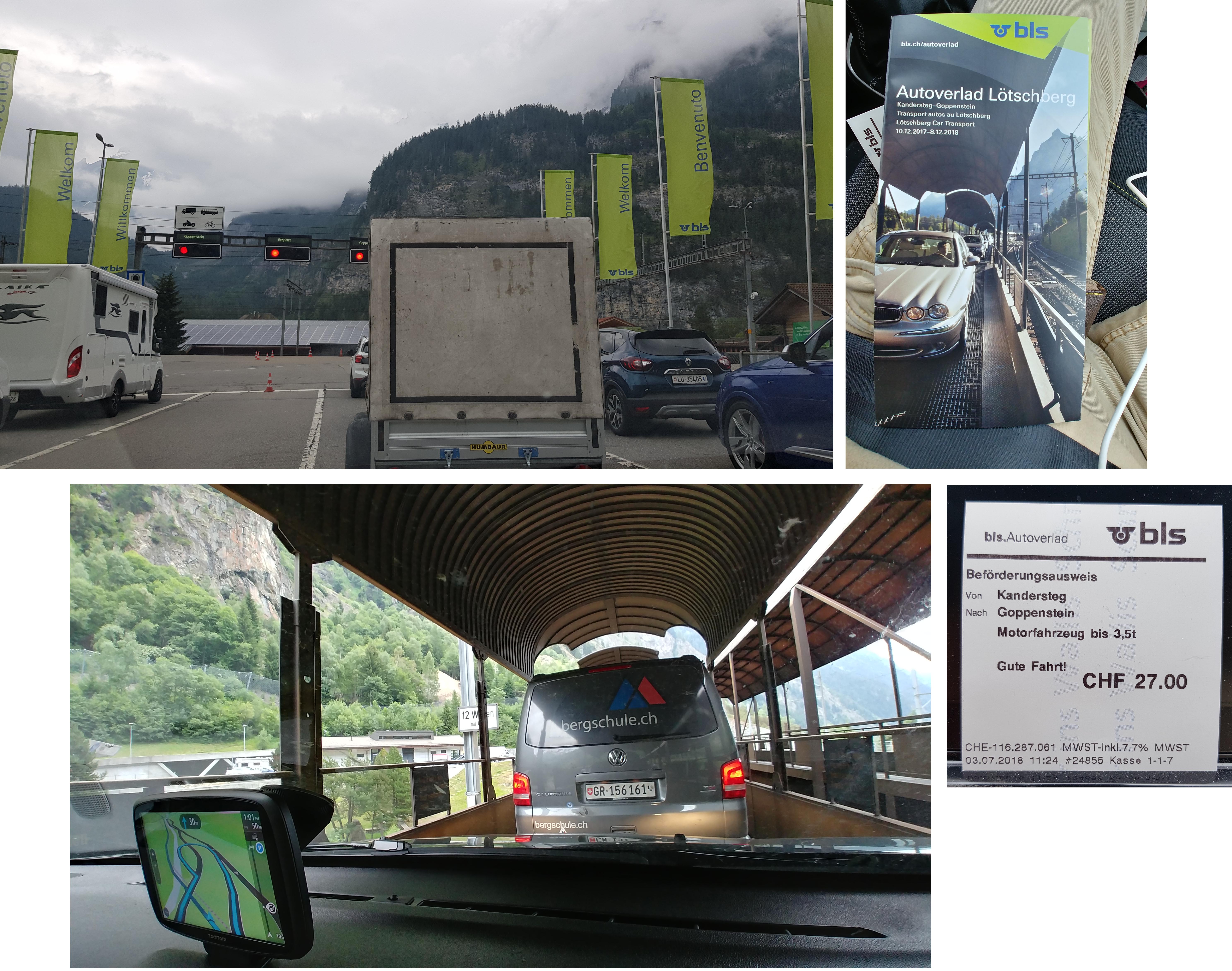 During our travelling it was common to drive our car onto a car-ferry to cross waterbodies, but this was the first time we drove our car onto a railway train to cross a tunnel. It was an interesting experience to park and secure our car on a long car-train and to sit in the car waiting to be transported.

The train journey took about 20 minutes and when the train entered the tunnel the whole surrounding was pitch black. It was amazing that we could not even see our fingers placed in front of our faces. At Goppenstein our car and us alighted and we carried on with our journey to Tasch. 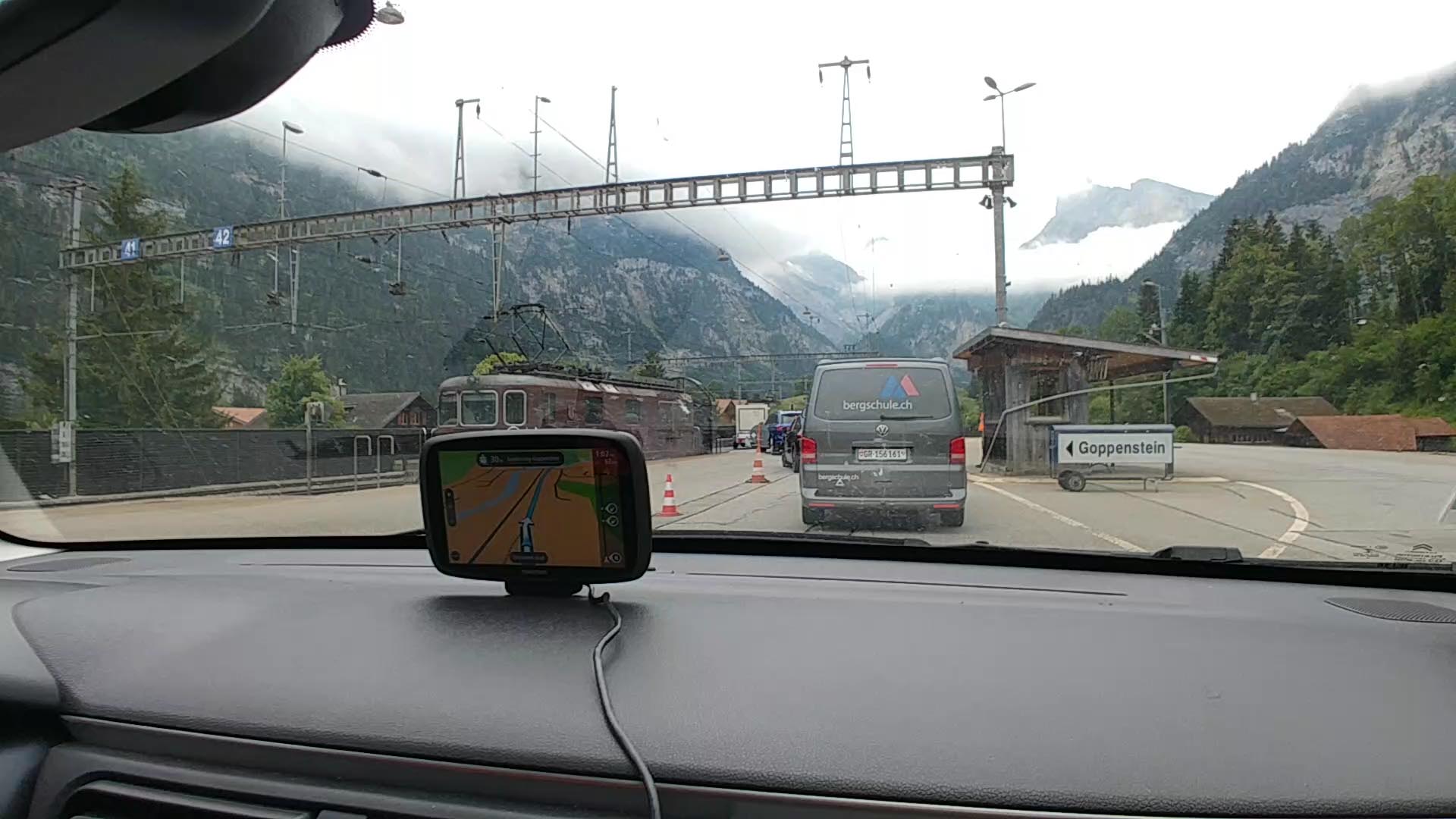 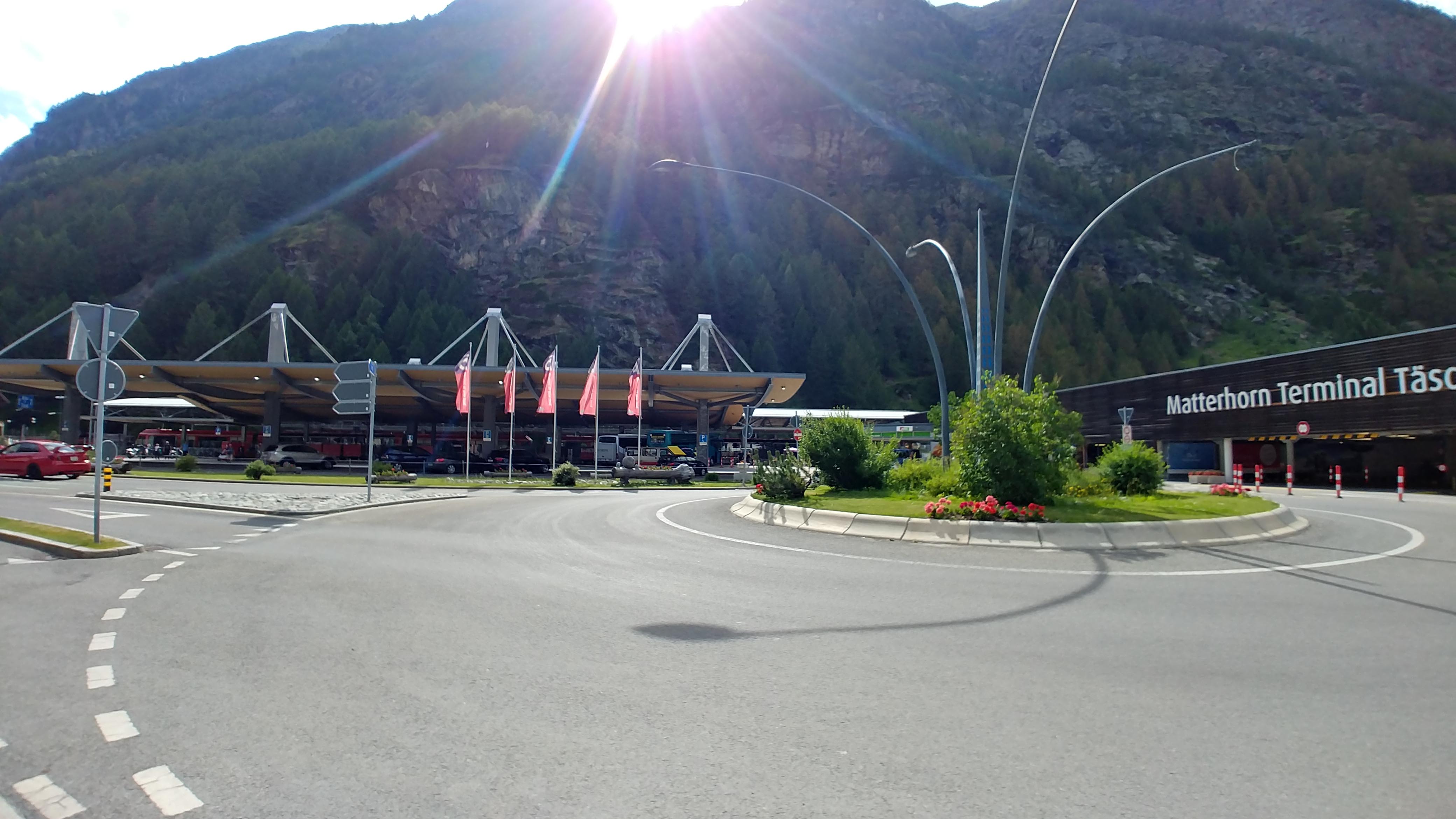 We did not park at Matterhorn Terminal Tasch but at a private parking just across from therterminal. It charged CHF8 per 24 hours. The only part we did not like about the charges was that if we exceeded 24 hours it would charge another CHF8 for another 24 hours, regardless if we exceeded by just one hour.

After we parked, a taxis came by to pick up another couple who had also just parked their car at the same carpark as us. The parking attendant suggested we joined the couple in the same taxis to get to Zermatt. The taxis cost would be CHF20 for the two of us. The first thought that came into my mind was the convenience of transferring our bags into the taxis. There was no need to wheel our luggage across the road to the train station. We accepted the offer without giving it much thought.

A decision made in a rush ended up full of regrets. We should have taken the train at a much lower total cost of CHF8.20. (Half fare single way ticket per person was CHF4.10). Though we might have to wheel our bags to the station, the distance was much shorter compared to the distance we had to wheel our bags after the taxis dropped us at Zermatt. Apparently non-Zermatt taxis had to stop near the edge of Zermatt as for the train it went further in by about 300 metres.

Zermatt was a small village overran with visitors. Hotels, restaurants, cafes, shops and visitors filled the streets. Every other person was wheeling a luggage and obvious “visitor” sign. Horse drawn carts and electrical cars were the modes of transport for those that preferred some helps to get by. 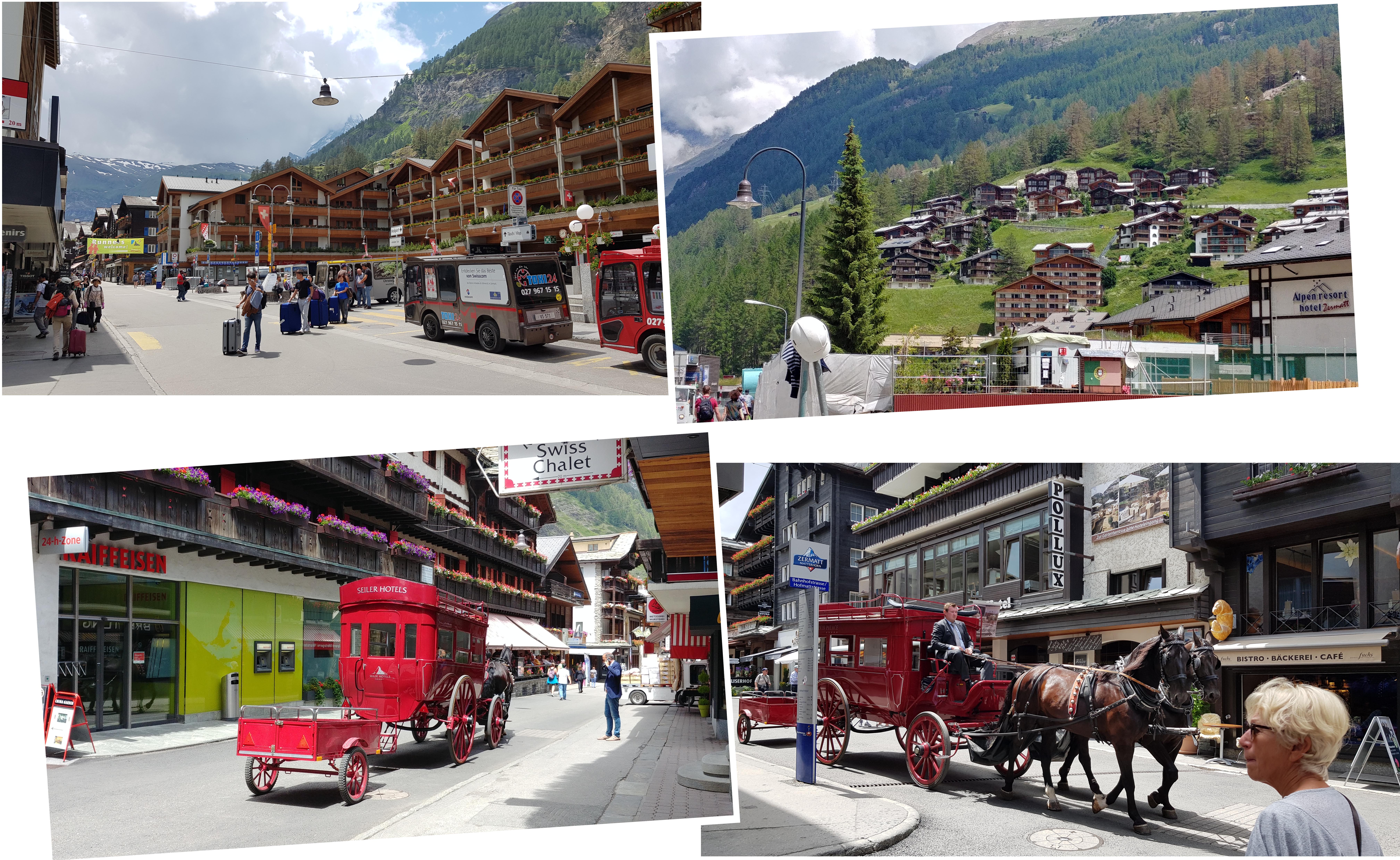 Zermatt sat at the foot of the highest mountains in the entire Alpine mountain range which included Matterhorn, Weisshorn and Monte Rosa. We only knew about Matterhorn, the world wide reknown mountain of Switzerland. So we just could not leave Switzerland without visiting or seeing Matterhorn. 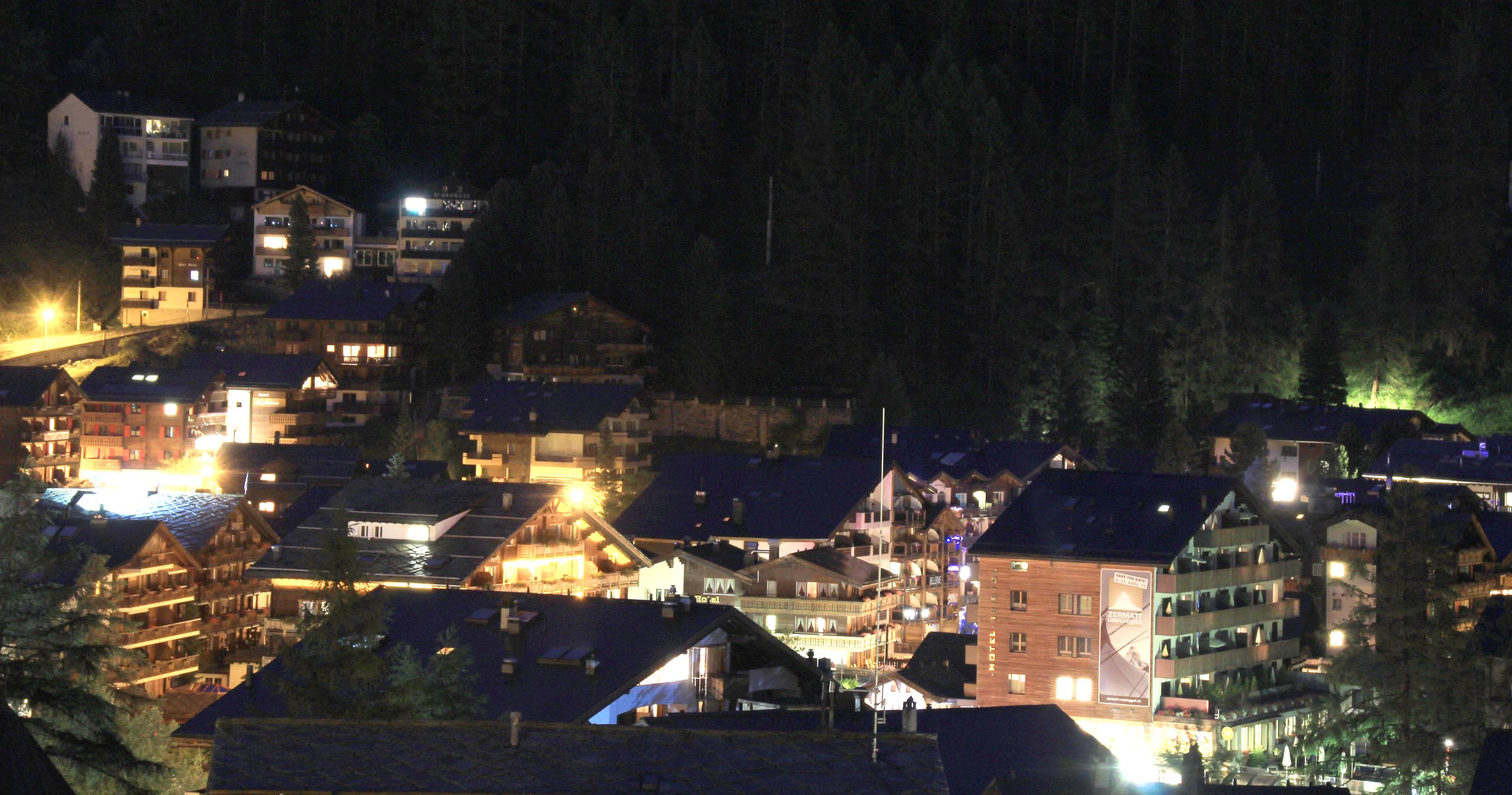 Zermatt Town as seen from our Hotel

There were many hiking trails and after looking through them we selected to 5-Seenweg trail. It was a medium-difficult 9 km hike that passed 5 lakes (Stellisee, Grindjisee, Grünsee, Moosjisee and Leisee), out of which at three lakes we would be able to see Matterhorn and its reflection on the lake water surfaces.

Our journey to 5-Seenweg-walk started from Zermatt  at Sunnega-Rothorn valley station. This station was not clearly marked on google map so it took us a bit of time getting to the right location.

The co-ordinates of Sunnegga-Rothorn Station was 46.022623, 7.751641. From this station visitors could go up to Sunnegga on a funicuar then onward to Blauherd via a cable car and then to Rothorn via a gondola or chairlift. 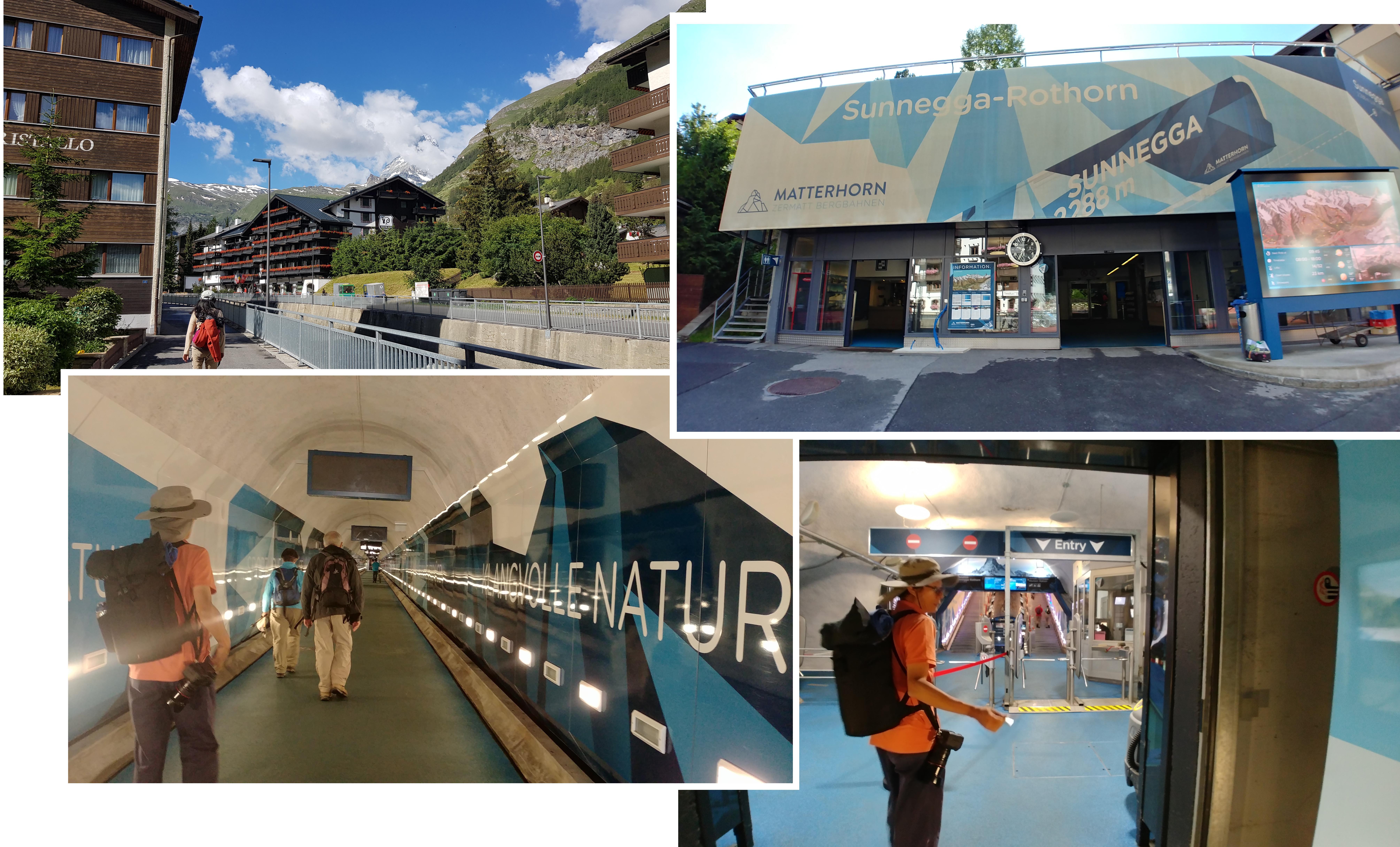 At the valley station we walked through a tunnel which led us to the funicular. The cost of a half fare return ticket between the valley station and Sunnegga was CHF13.5 per person. We did not  purchase the cable car ticket  for the next stage (Sunnegga to Blauherd) as we were not sure if we should buy a single way ticket or a return ticket. The ticketing staff advised us to purchase the tickets at Sunnegga station. 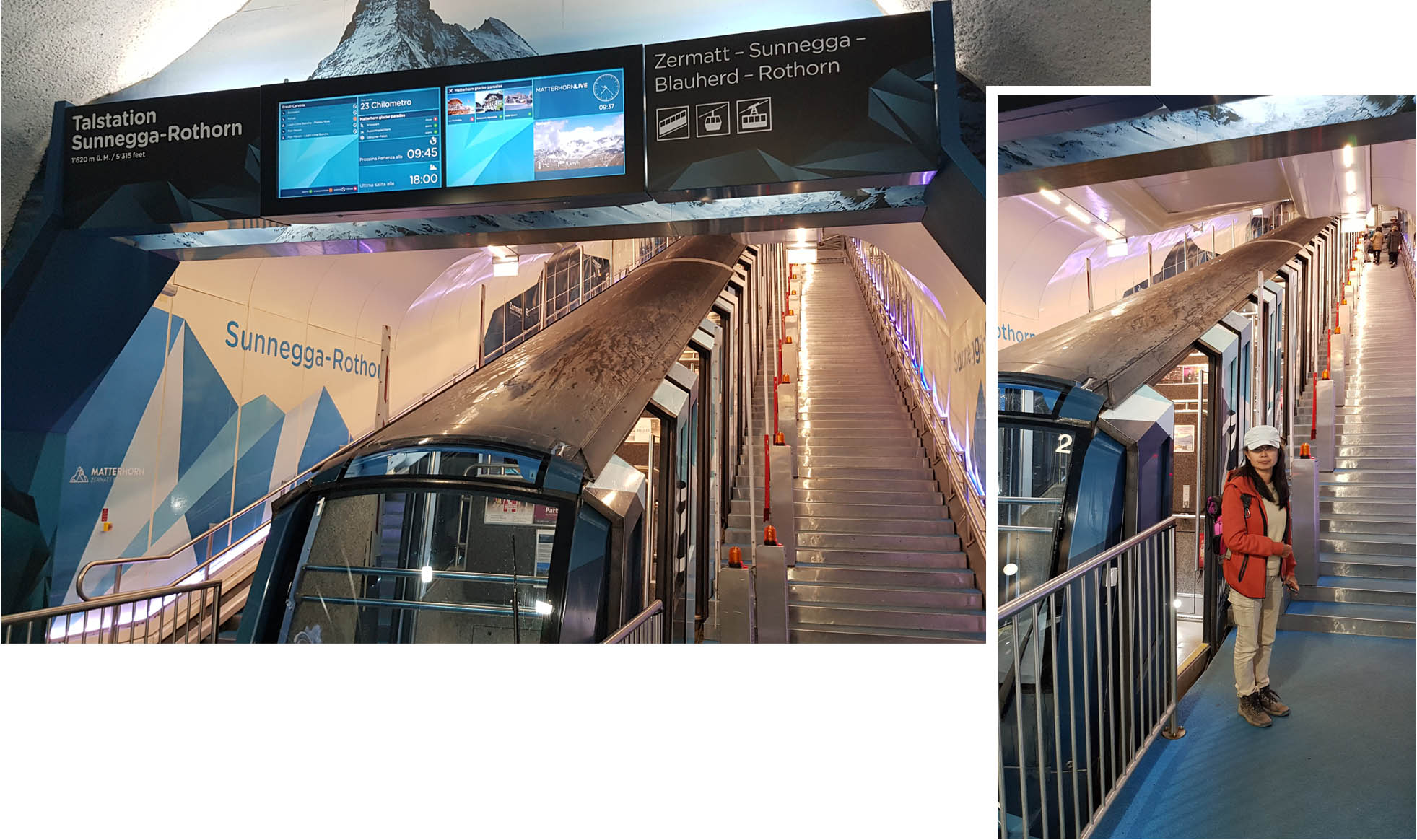 Funicular transfer from Zermatt to Sunnegga

The funicular ride took about 5 minutes to ascend 2288 metres. Sunnegga was a “sunny corridor” of Zermatt. There were restaurant, sun terrace, flower trails, a beautiful lake (Leisee) with playground, barbeque areas and water features. We could start our 5-seenweg walk from Sunnegga which would take us mostly uphill, walked by the five lakes and finally ended at Blauherd or we could take a cable car ride up to Blauherd and walk most downhill passing the five lakes and ended at Sunnegga.

We decided to ride the cable car from Sunnega to Blauherd and start our 5-Seenweg walk from Blauherd. We bought the oneway ticket to Blauherd and the half fare one way tickets costed CHF8.5 per person. 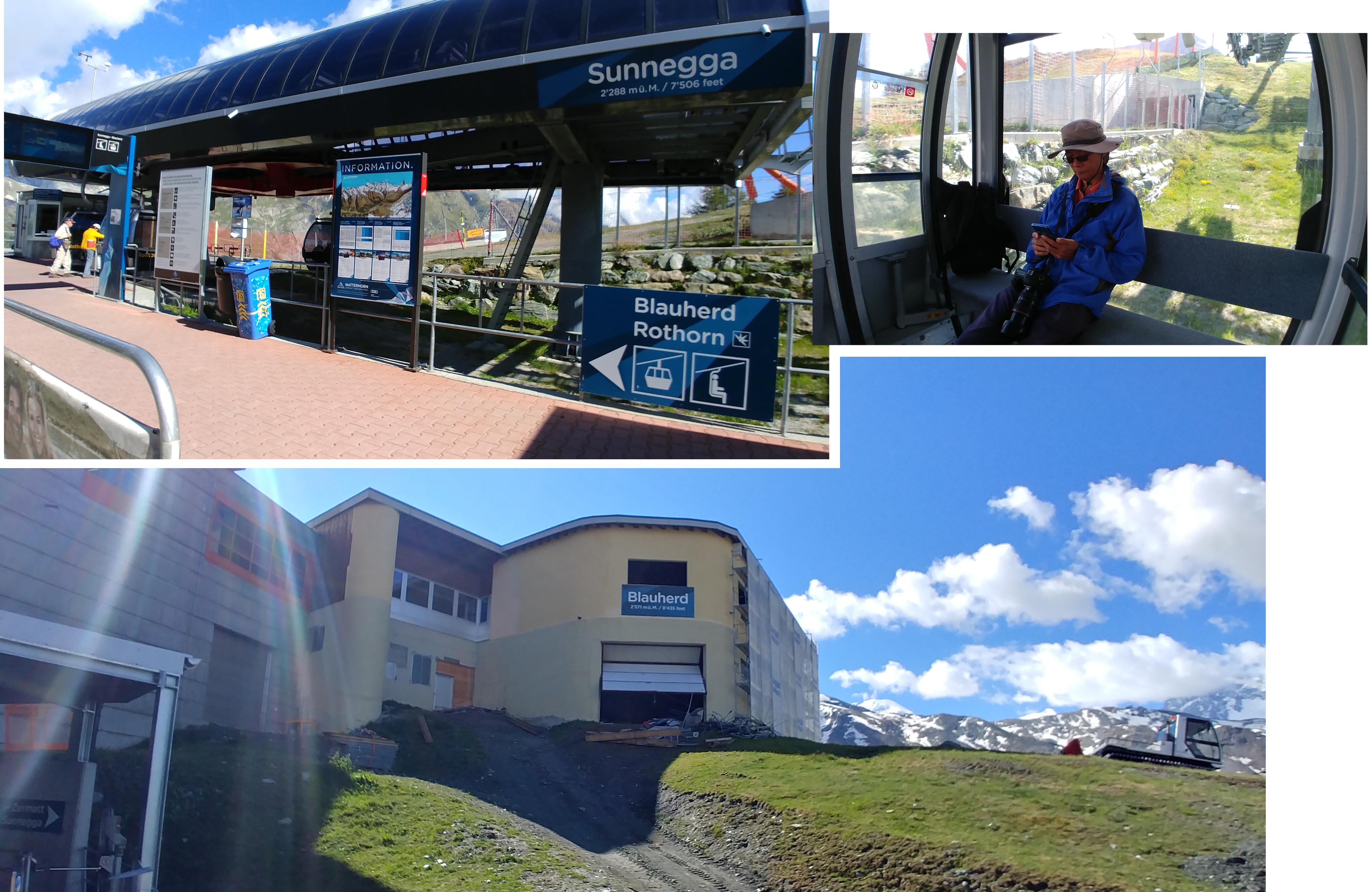 At Blauherd we followed the signs that pointed to the first lake, Stellisee, to start our 9 km hike. We hiked for about 1.5 km to Stellisee, the trail was pretty flat with some inclinations here and there. Along the trails the only wild lives we saw were grass and flowers but no animals. 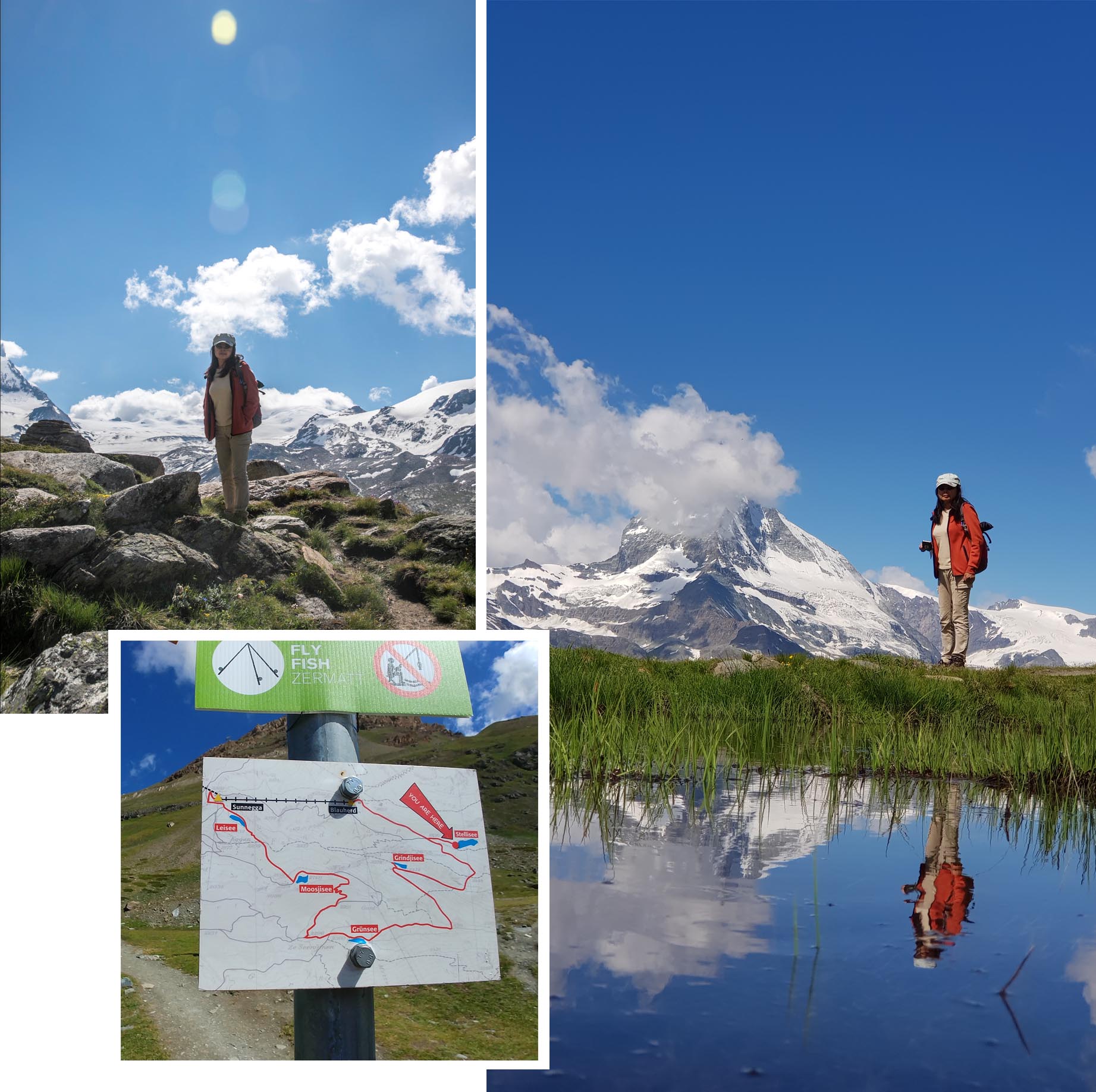 From Stellisee we walked through a pretty dry and wide expanse of land to Grindjisee. We could see the lake which did not look very far, but had to follow the route that sort of made a big loop to Grindjisee. The route from Stellisee to Grindjisee was about 2 km. At Grindjisee we took a short break. The lake was not very exciting or pretty and the surrounding was rather bare. 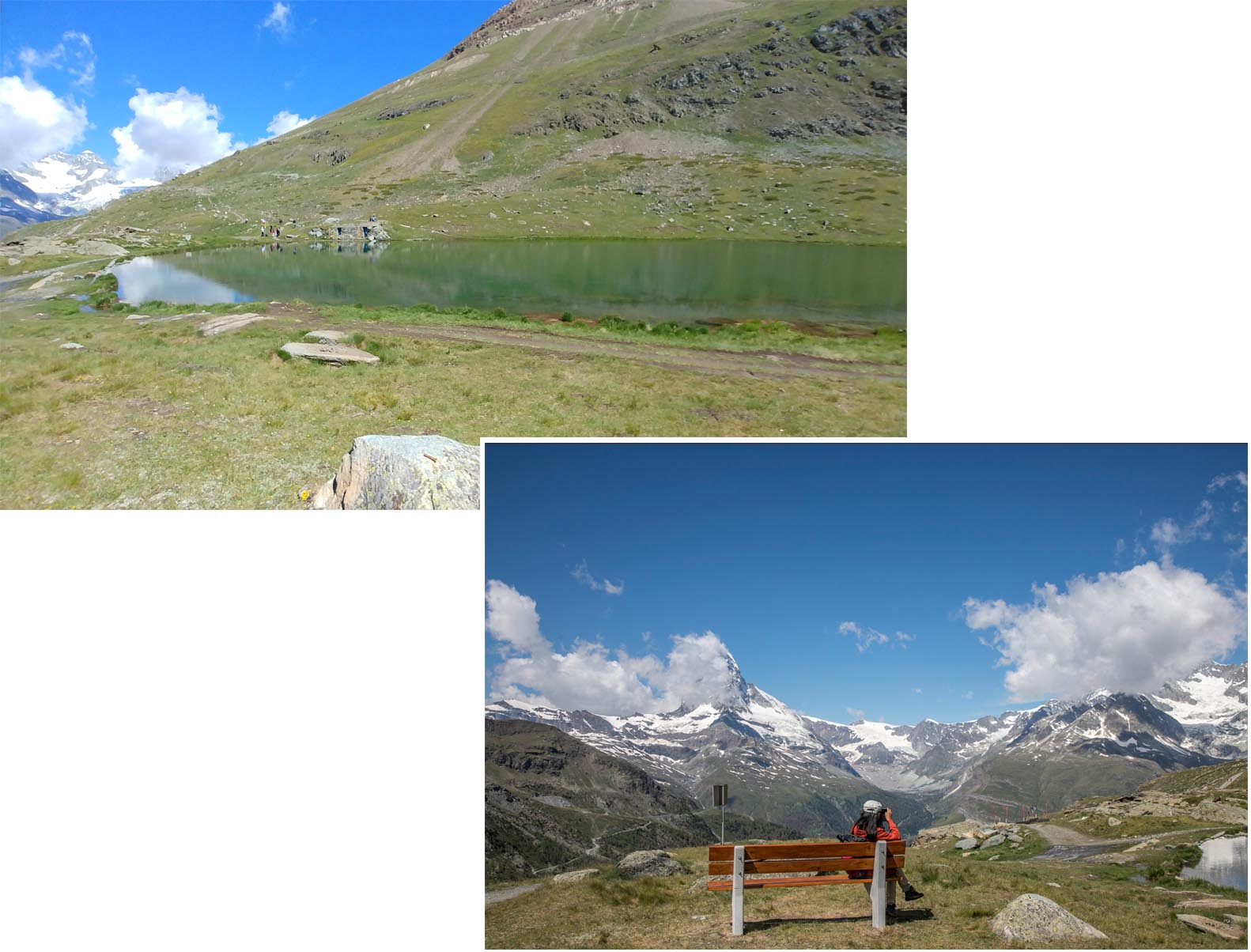 From Grindjisee we walked for another 2 km and reached Grunsee. This third lake was the prettiest lake that we had see so far. Around the lake were many trees and greenery. We found a nice spot to rest and enjoy the view of Matterhorn. 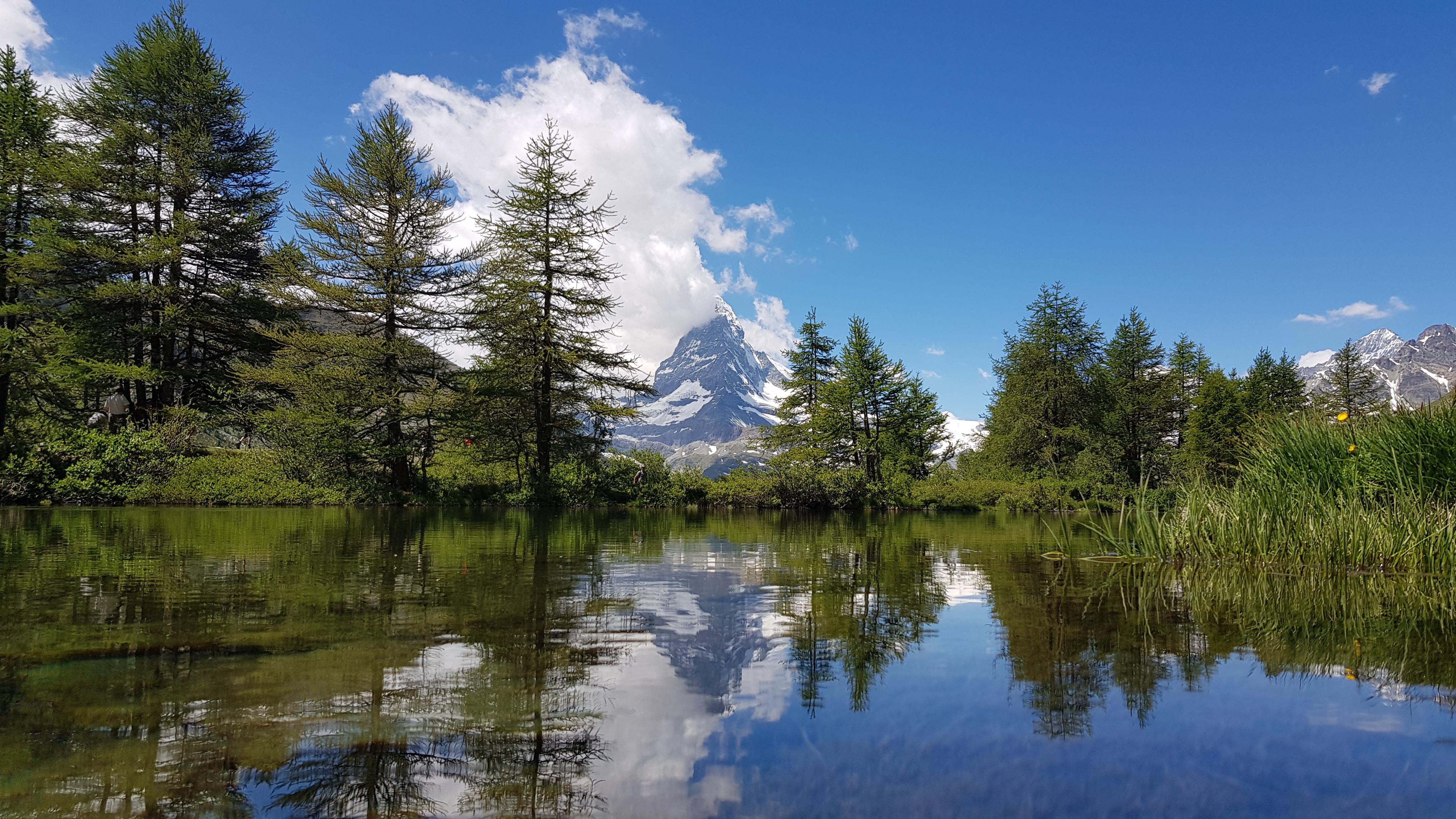 From Grunsee to Mosjesee was another 2 km of walking. Mosjesee was not a natural lake but an artificial reservoir. Its water was used to generate electricity and for snowmaking along the pistes. One of the sources of the lake was Findel Gracier which accounted for the milky blue color of the water in Grunsee. This color was due to the sediment-rich glacial meltwater. 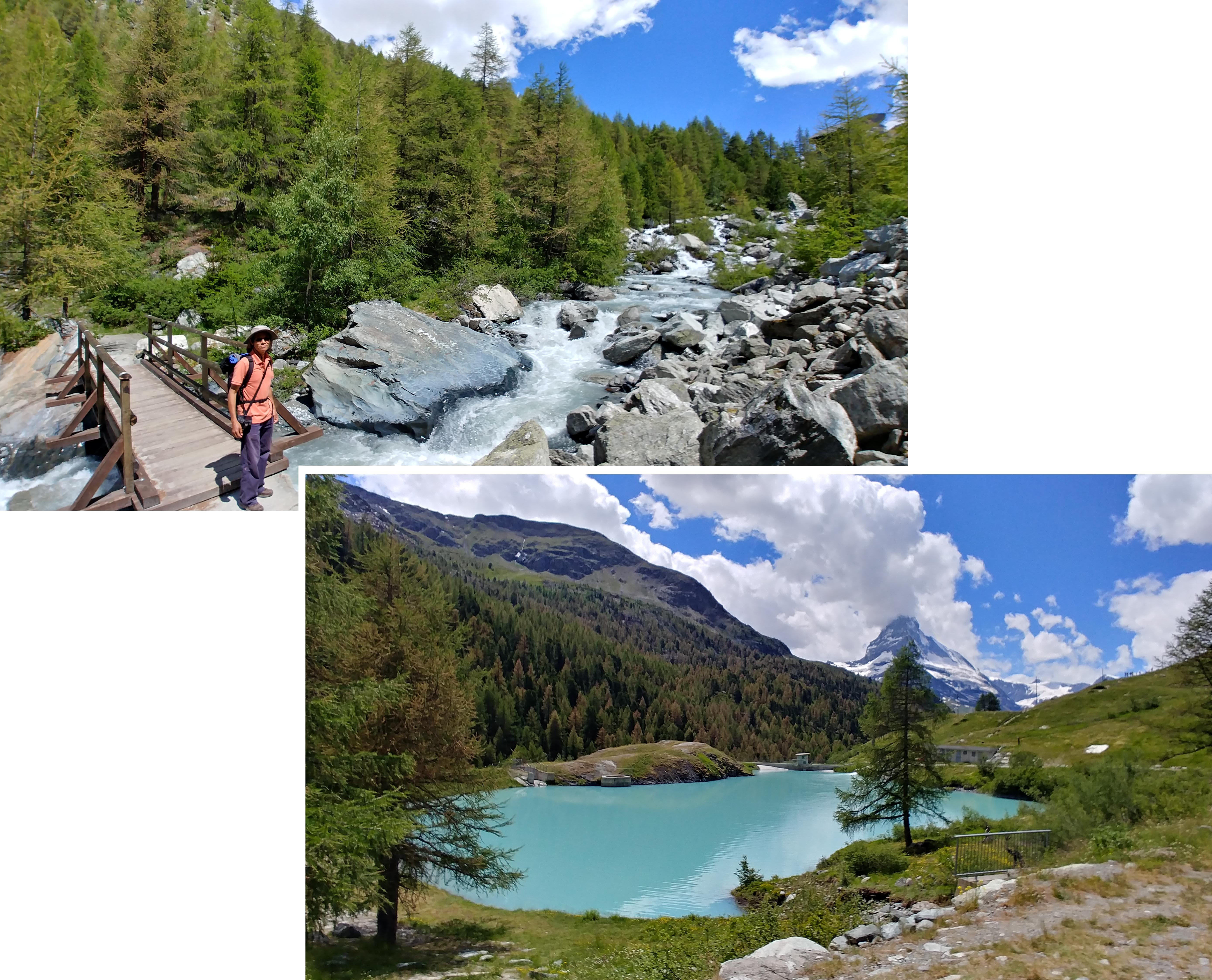 Mosjesee to Leisee (the 5th lake) was a very steep upward climb. We took many stops to catch our breaths, to admire the view and to take pictures of the alpine slope of flowers. 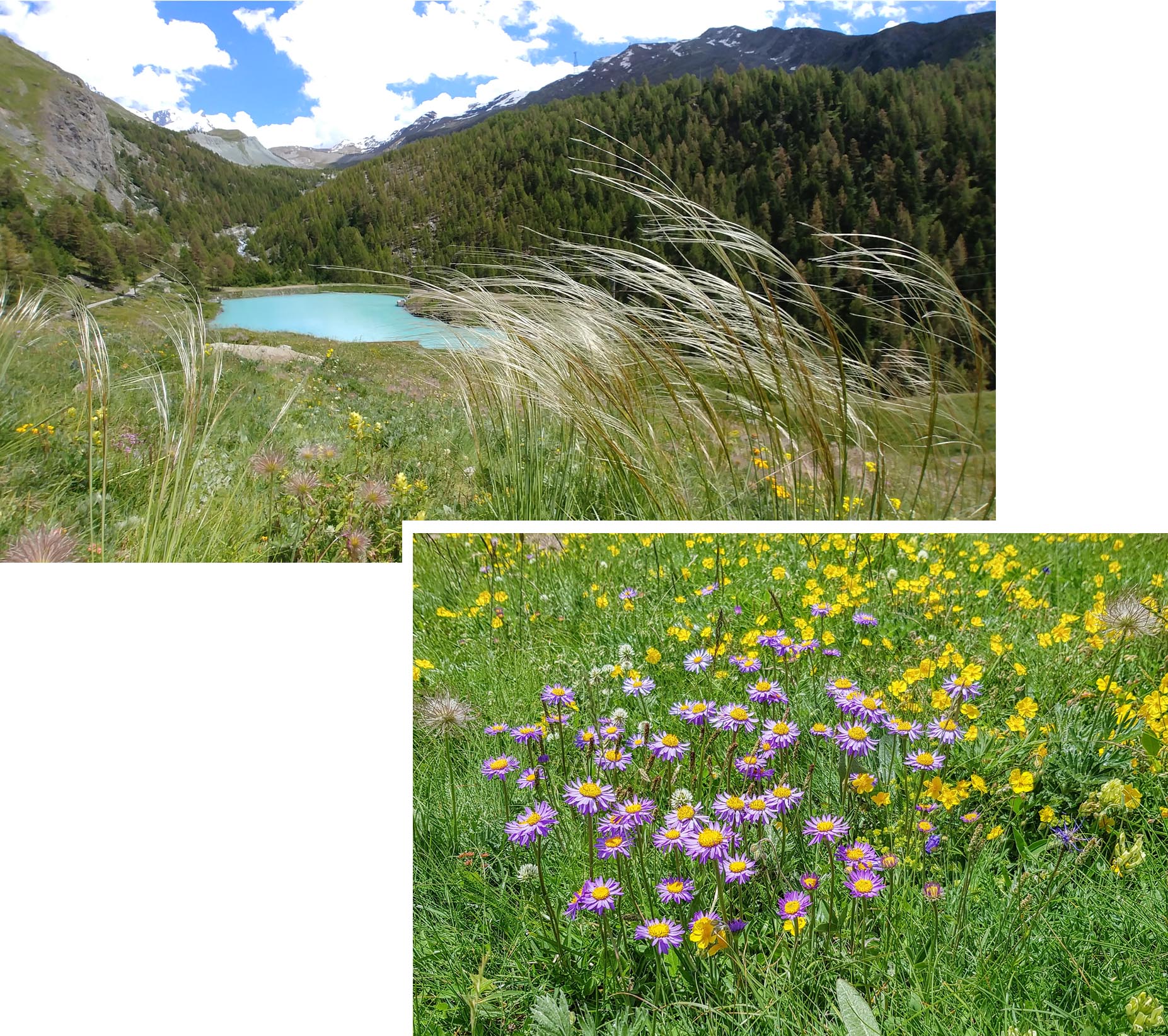 Finally we reached the last of the five lakes, Leisee after about 1 km trek from Mosjesee. Leisee was a recreation lake, a lake where families came to swim and play. There was no charges to enter into the recreation “beach”. 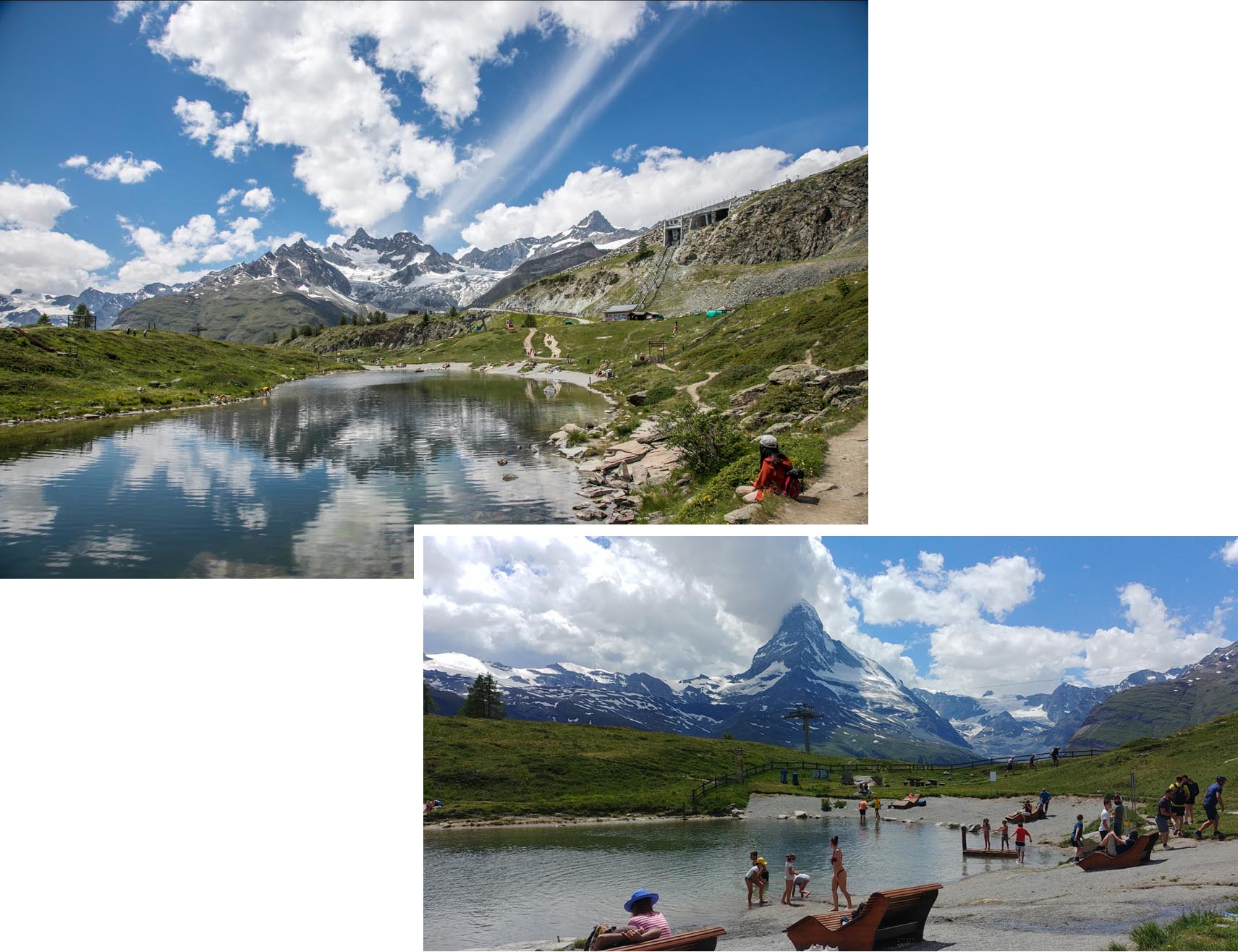 From Leisee to Sunnegga station was another very steep uphill climb. Luckily we spotted a funicular/lift/shuttle that connected the Leisee “beach” to the Sunnegga station. The ride on this lift was free too. 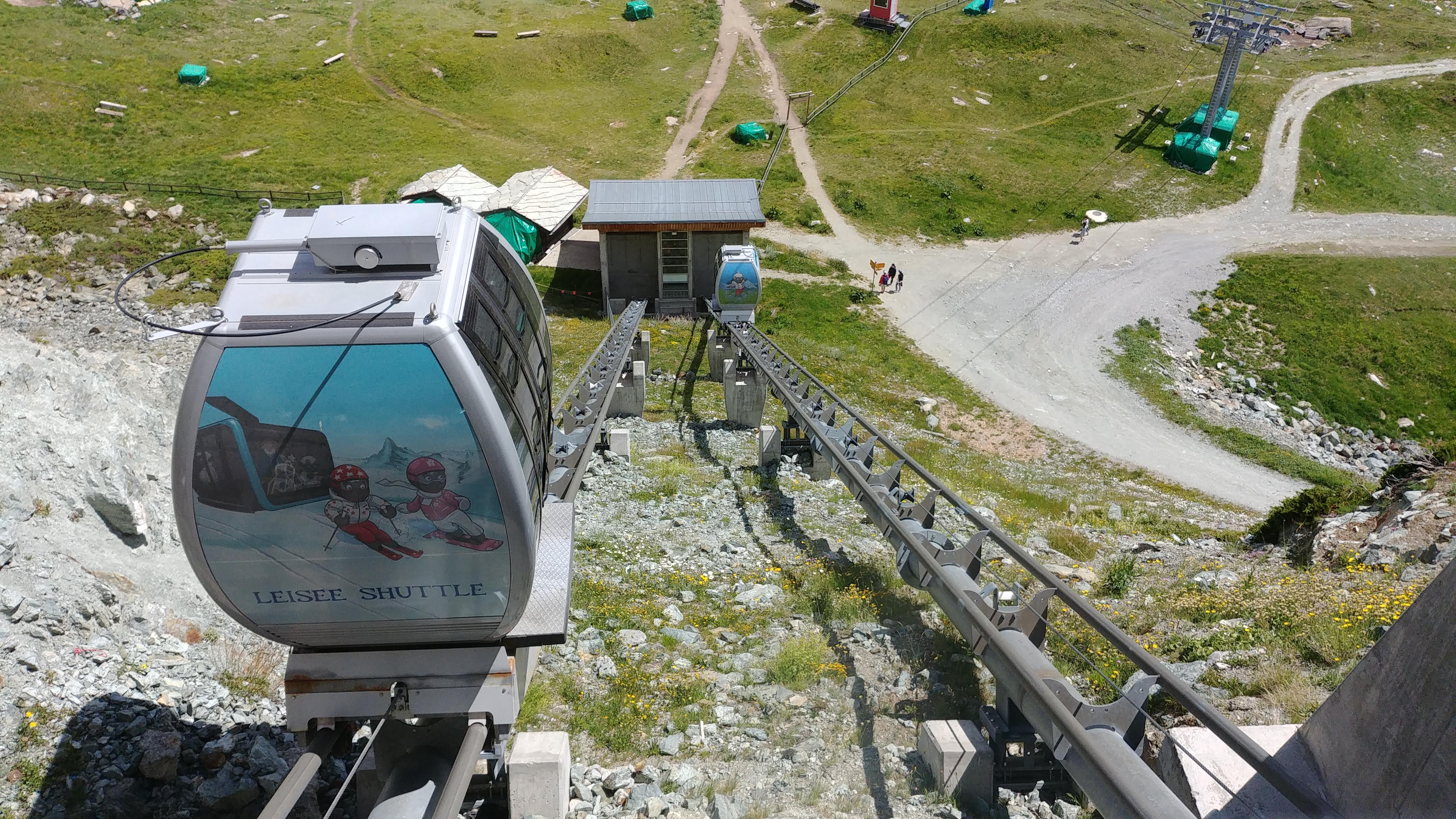 We took about 4.5 hours to complete the 5-Seenweg walk. We started at Blauherd station at about 10.30 am and we ended at Sunnegga Station at 3 pm. Though it was only a 9 km walk we took our time to enjoy the sights of the alps and the lakes. At each of the five lakes we stopped between 15 minutes to 30 minutes. It was a lovely hike.

We left Zermatt at about 5 pm on the 4.55 pm Zermatt-Tasch shuttle (train). At the station we could not find a ticketing staff to purchase our half-fare, one way tickets. We consulted a staff walking on the platform who advised us to get the half-price ticket from a ticketing machine by selecting the half-fare button. After we bought two half-price tickets and was walking away when the same staff who gave us the advice requested us to show him our Swiss Half Fare cards. We thought he was kind of sneaky. He did not mentioned anything about the Swiss Half Fare cards before our purchases but was waiting to catch “visitors” that violated the policy.

We booked our double room  at Le Petit Charme Inn from booking.com. It costed CHF138 a night for a double room with ensuite bathroom and breakfast. Accommodation in Zermatt was rather pricey and Le Petit Charme Inn was our best find. We reached the hotel at 2 pm but could not check in till 3 pm. The hotel receptionist told us that the cleaner would not be done till 3 pm. She was kind enough to invite us to visit the roof terrace to relax. 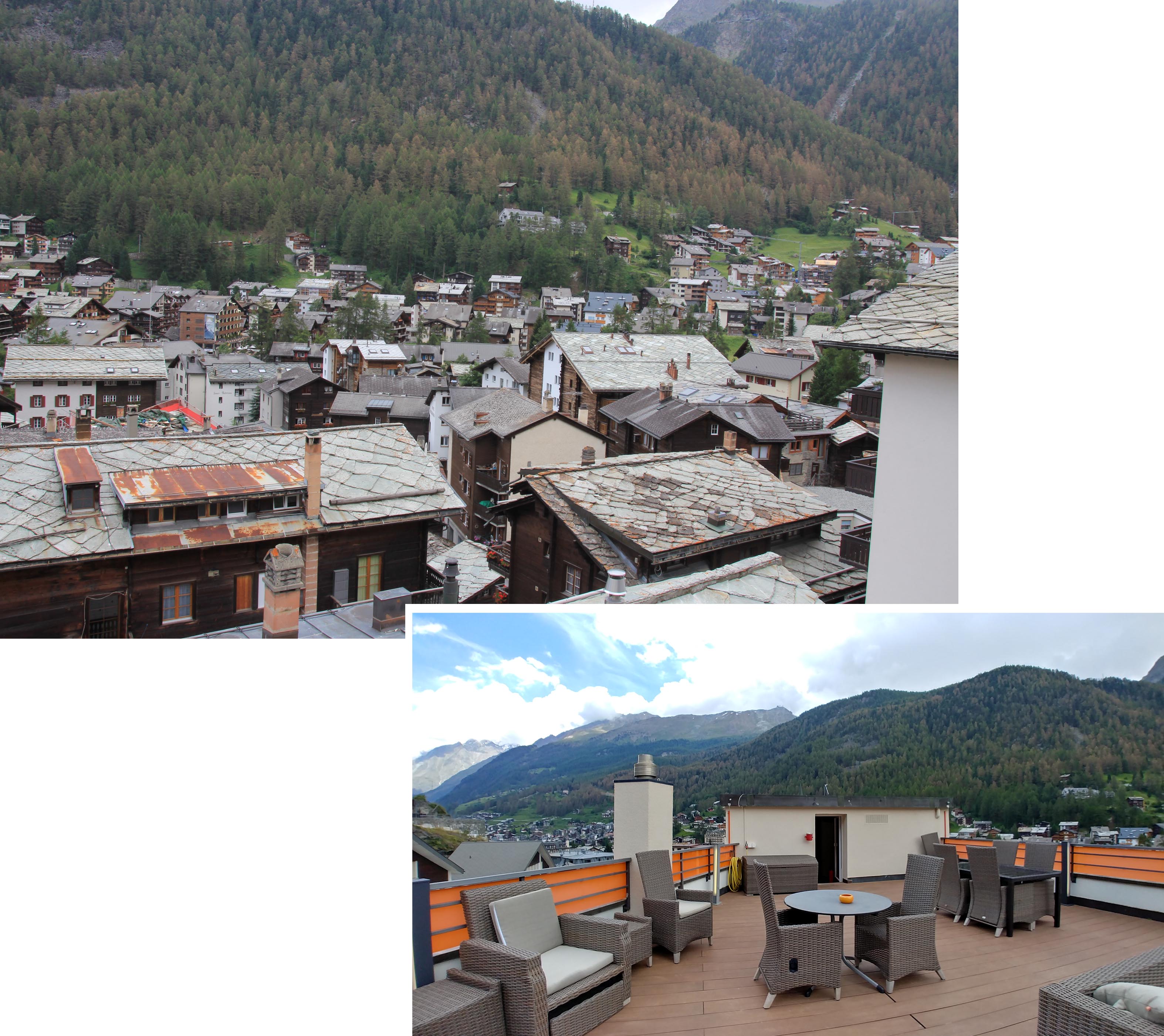 From the roof terrace we should be able to see Matterhorn, unfortunately it was covered behind a thick mist and all we saw was a big patch of grey and white. Our double room was small but comfortable and clean. 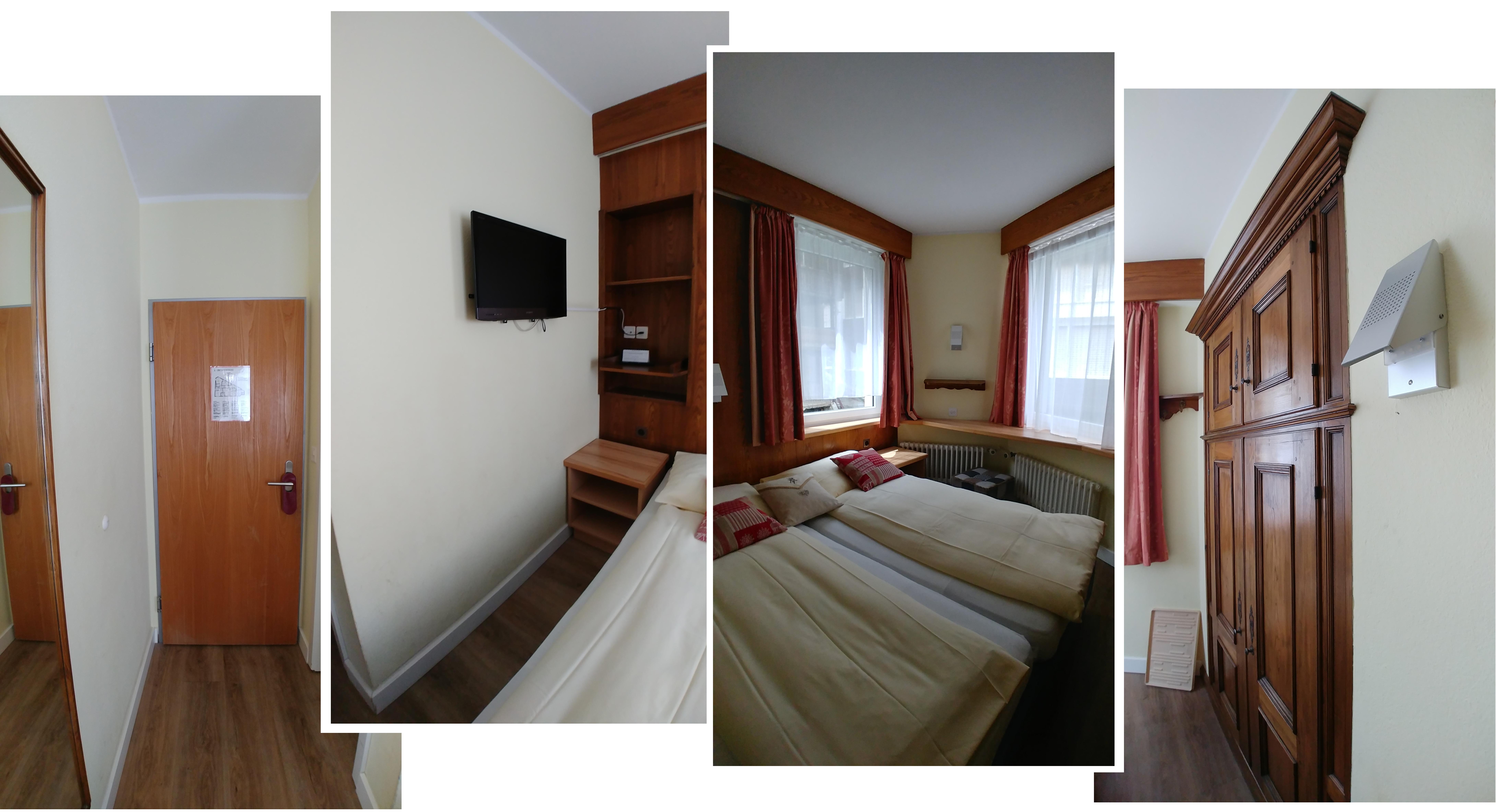 The ensuite toilet was big and clean and the shower was strong and hot. 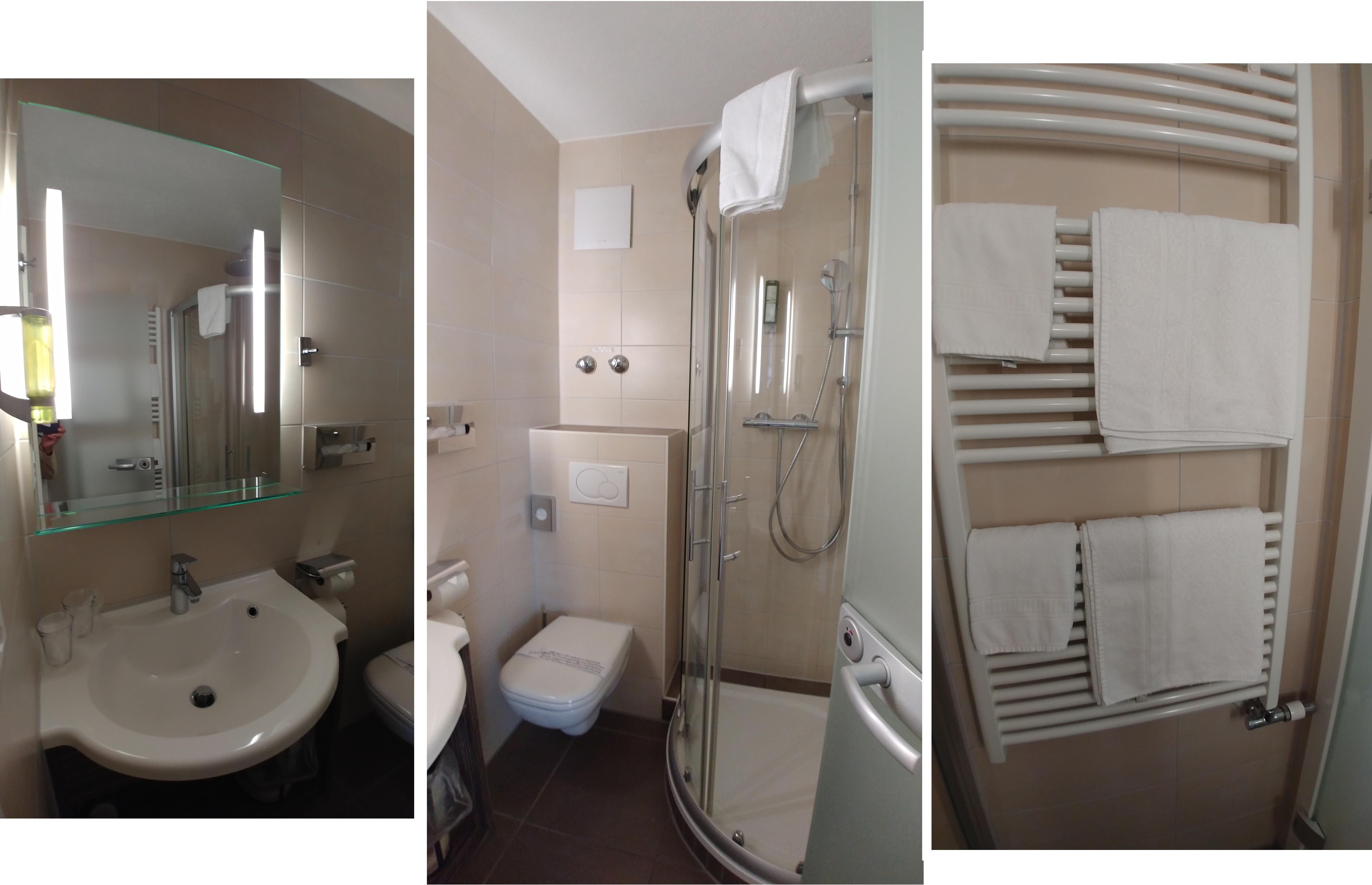 Breakfast was at the hotel dining room on the ground level. It had a good spread with many varieties. We enjoyed the breakfast very much. 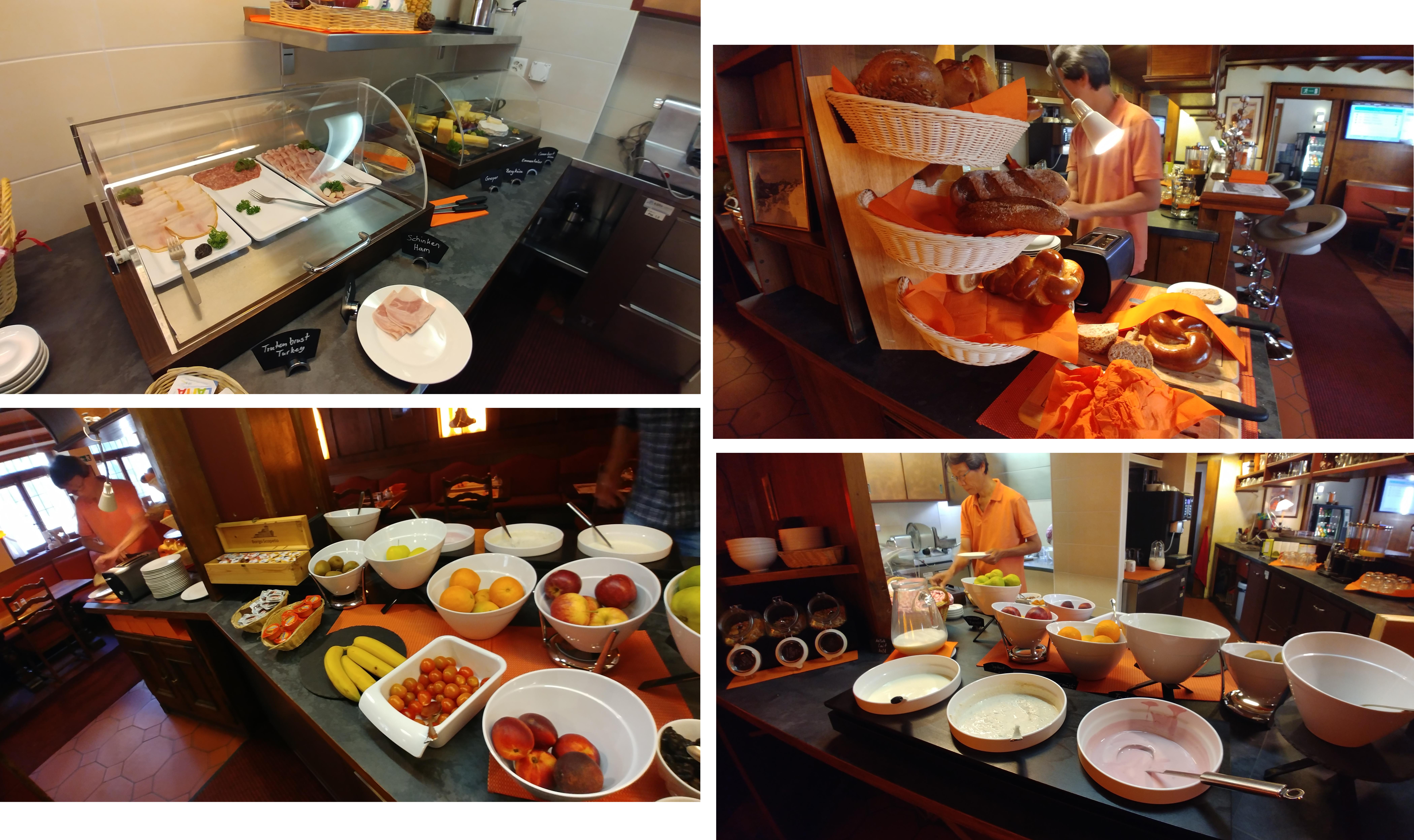