We would be leaving Sapa at about 3 pm for Hanoi. Our estimated time on reaching Hanoi was 9pm which would not leave us much time but to check into our hotel and rest.

By end the day
The bus ride did not start till 4 pm and the journey duration was an hour longer than expected. By the time we reached Hanoi it was about 10 pm. Luckily our hotel, Amorita Boutique was just 180 metres from the bus station so it was very easy to roll our luggage to the hotel and checked in. It was Friday night and was a “walk night”, a night where certain roads were closed to traffic and the surrounding places became a huge walking malls. By 10.30 pm we were one of the thousands at the malls.

We checked out of Phuong Nam at about 11am and while paying our bill we were pleasantly surprised that we had a vnd200000(usd8.50, sgd12.00) discount. The discount was to compensate for our “discomfort”. Three days ago we requested for a change of room as we did not like the wisp of “bird poo” smell that occassionally drifted into our balcony window (when it was opened). The smell was due to one of the neighbouring houses rearing pigeons on its roof and the roof was just a short distance below our balcony. Unfortunately there was no suitable room for us to shift into so we had to stay put.

All over Sapa was “Sport shops” selling one/two/three layered gore-tex jacket, pants and bags. Across our hotel were several such shops so we went across and picked up some items. Branded products were going at easily one-tenth of the prices sold in Singapore, so we could only assume that they might not be the real thing. 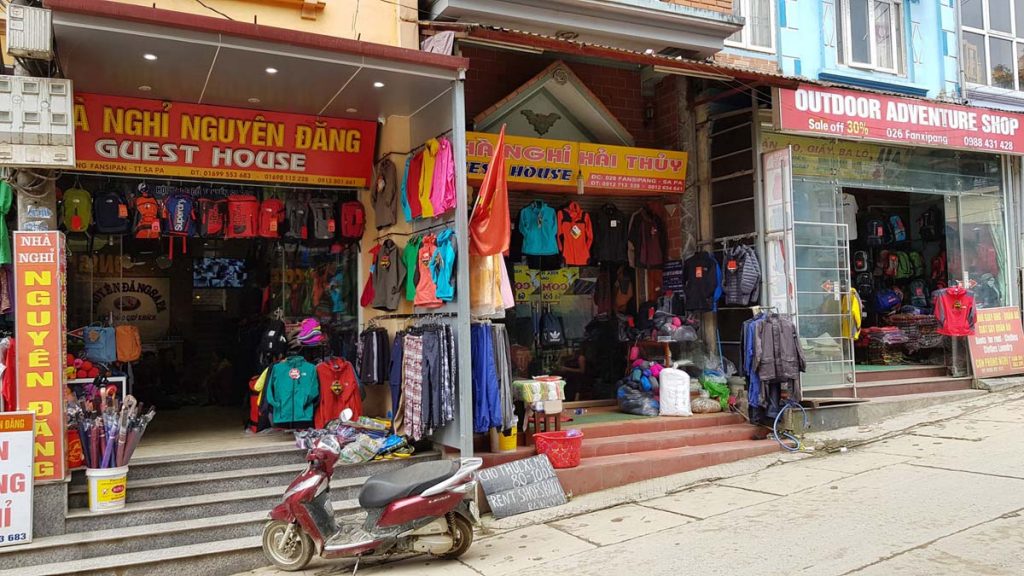 Of course the shop owners claimed that they were authentic, and even demonstrated their waterproof quality. Basically customers should not buy these products for their brands but for their cost, quality and functionality.

We dragged our luggage to Sapa Express which was beside Sapa Station, there we confirmed that our names were on the bus name lists. We were allocated a place to deposit our luggage and left to roam the town. 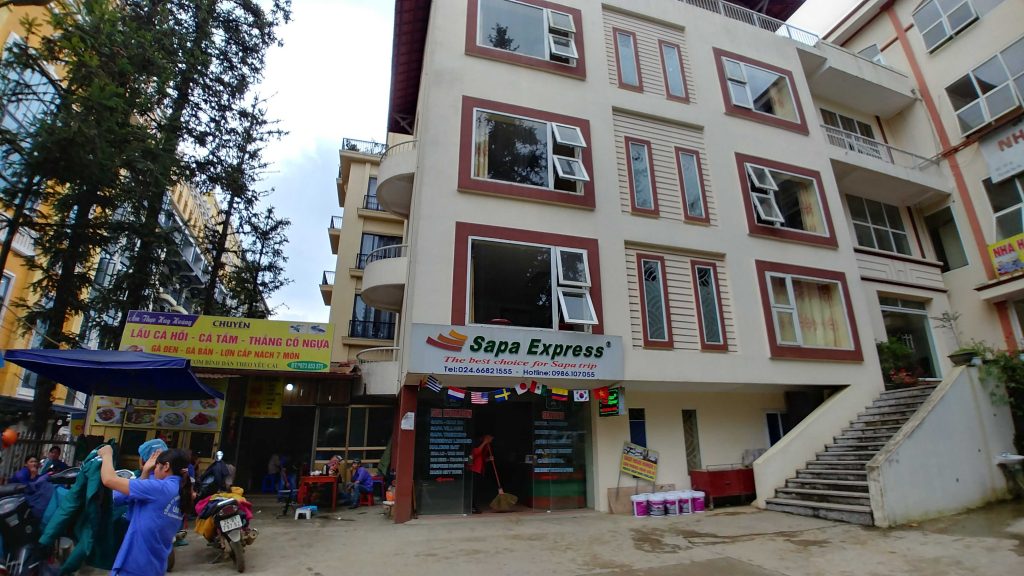 With about 3 hours to kill we decided to look for a coffee and cake place. We walked past Viet Emotion Cafe which like usual was packed. We past “The Gecko” which we had patronised two days ago and did not want to go in again not because the food was not nice but we wanted a different experience. The chosen one was KAFA Cafe just at the intersection of four roads. 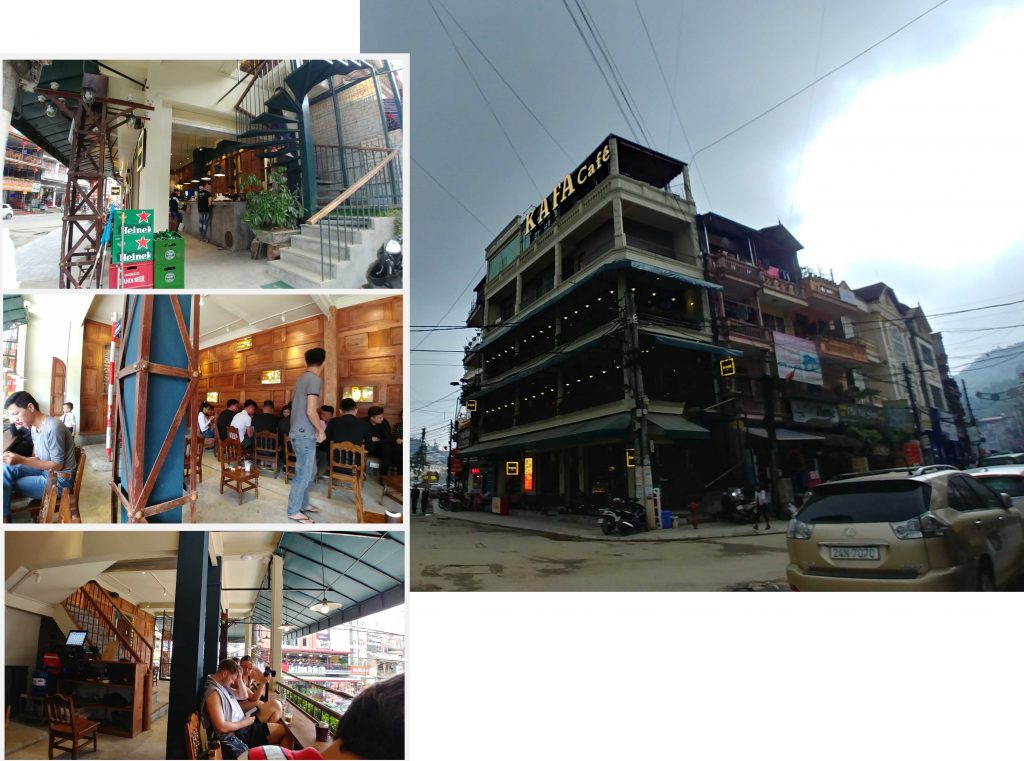 This cafe had three levels, so we went up to the 2nd level. We picked a seat just by the railing and ordered cakes and cafe latte. The total cost was vnd170000 (usd7.25 , sgd10.00) We found the prices were slightly cheaper at KAFA Cafe. 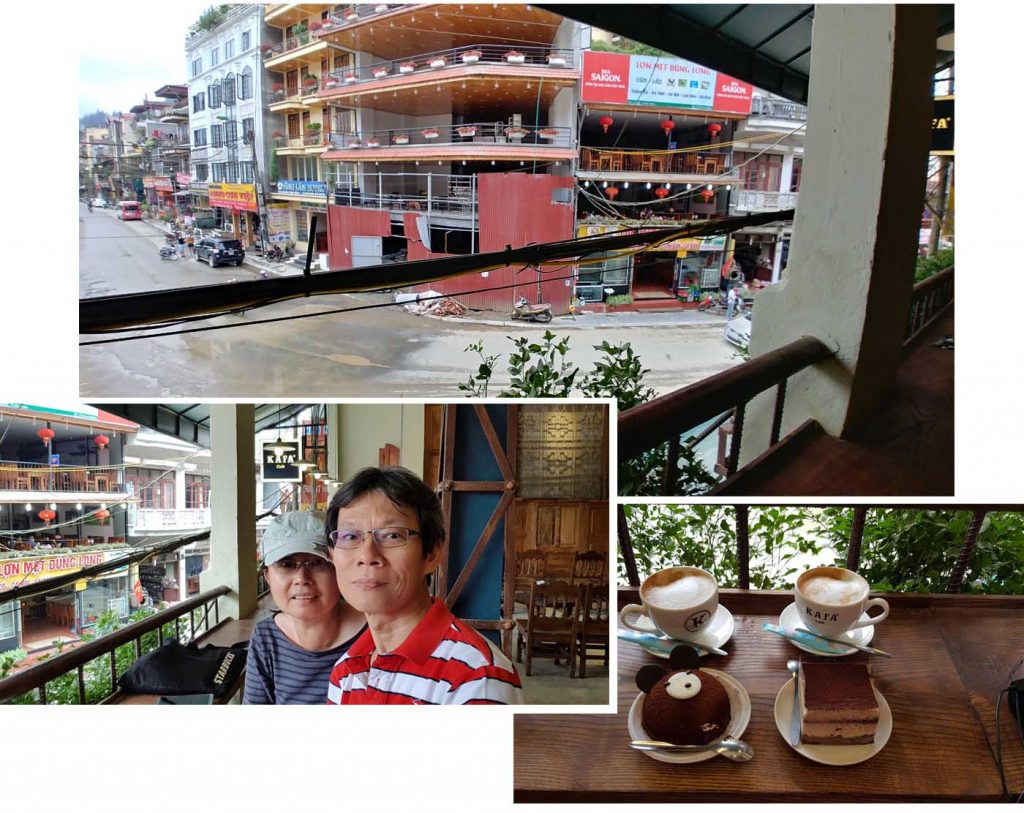 At about 2.50 pm we were on our way back to Sapa Express Office when we saw two young men selling chestnut and groundnut. Chestnut was one of our favourite snacks. In Singapore, roasted chestnut was expensive so we were very surprise that for 500g of chestnut the cost was only vnd50000 (usd2.15 , sgd3.00) which was at least four to five times cheaper than. We gladly bought 500g of chestnut. 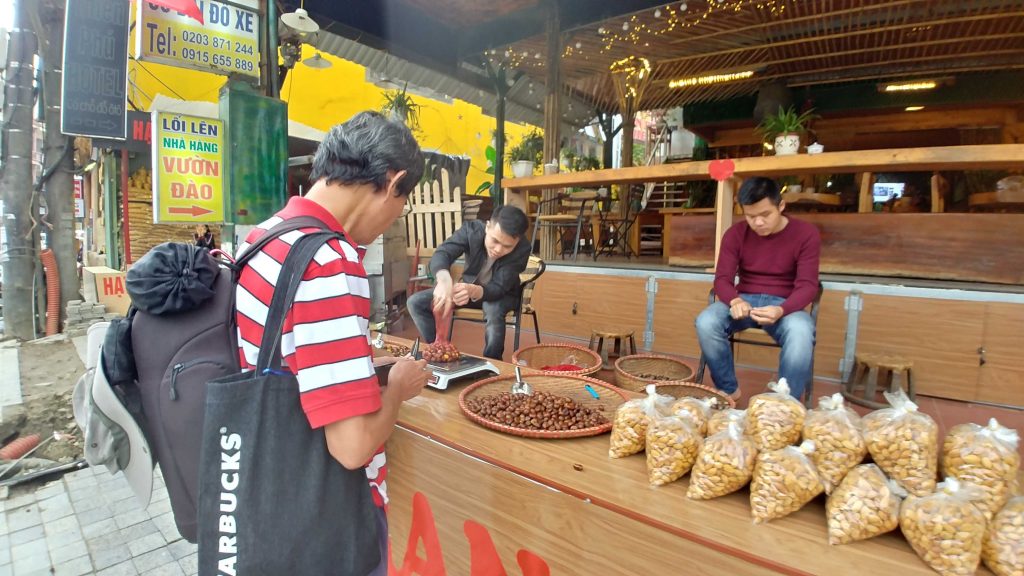 By the time our bus left Sapa it was 4pm. The journey was supposed to be 4.5 hours but a highway diversion at a section unpassable due to landslide lengthened the journey to 5.5 hours. Unlike the bus journey from Hanoi to Sapa which had two coffee breaks along the way (30 minutes each time), the return journey had a one hour dinner break. By the time we reached Hanoi it was 10.10pm.

Our Sapa Express guide told us that Friday night was a “Walk Night” where section of the Old Quarter (near Sapa Express Bus Terminal) was closed to traffic and became a huge pedestrian malls. So we would have to expect many people moving about and be very carefull with our belongings. Our hotel was just 180 metre away so once we checked in and settled our luggage we were all ready to join the “Walk Night” 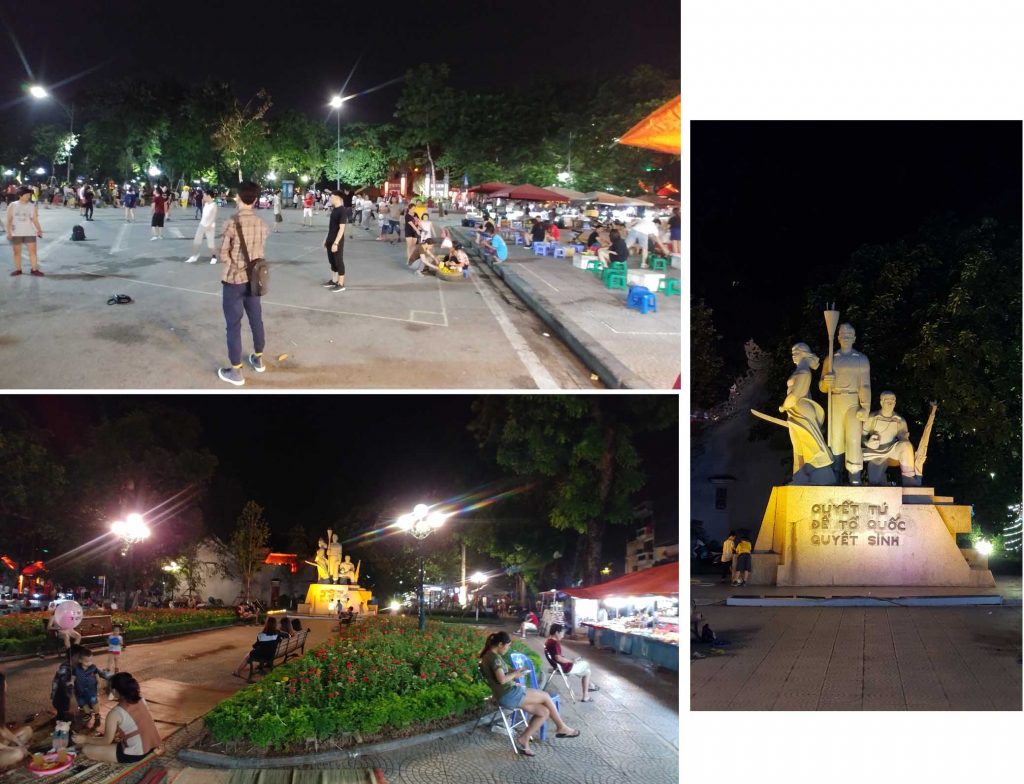 Many people were on the road, some playing some looked like they were picnic-ing with food and drink as they sat on straw mats placed on the road. There were many food stalls and a night market with lines of stalls that went on and on. 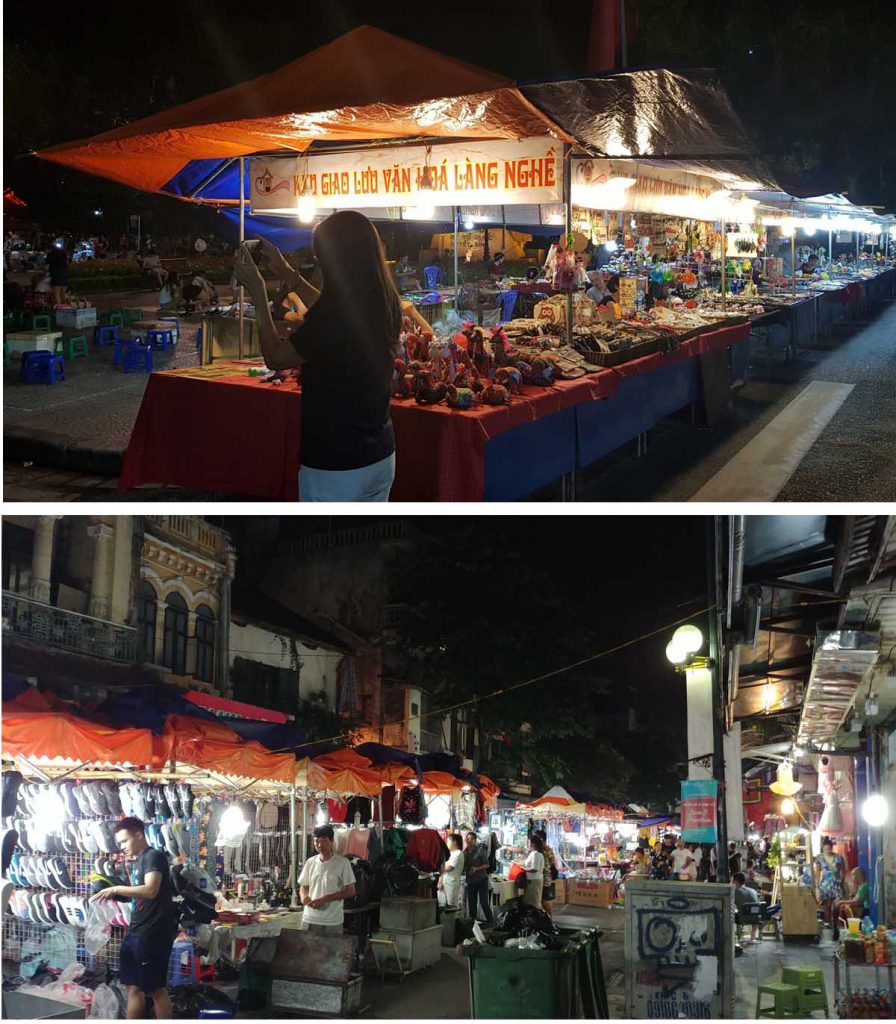 The “Night Walk” bordered the Hoàn Kiếm Lake which was beautifully lighted up at night. 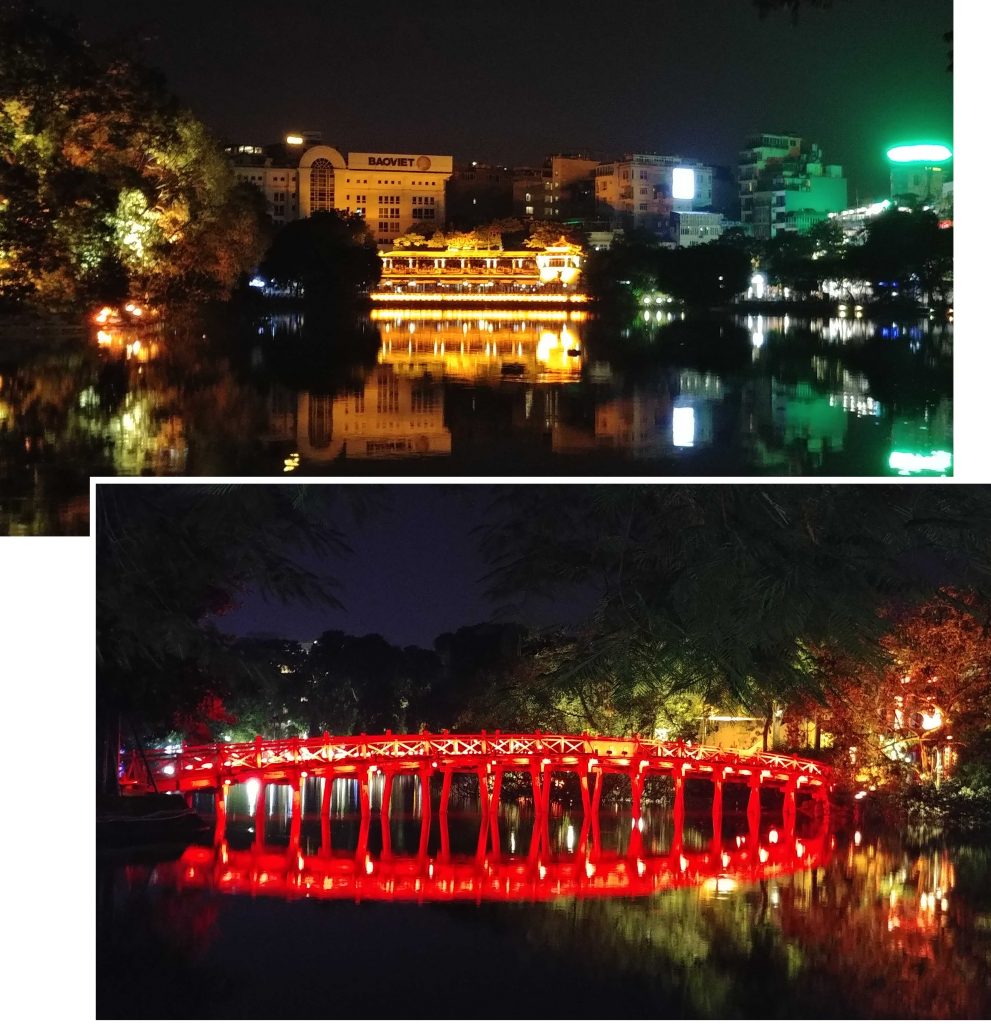 Our stay for the night was Amorita Boutique. We selected it mainly because of its proximity to Sapa Express Bus Terminal in Hanoi which allowed us to walk easily to the hotel after we returned to Hanoi. We arrived in Hanoi after 10 pm and were only too glad that unlike many other passengers we did not have to go though the hassle of finding transportation (grab bike or taxis) to get to our hotel. Sapa Express Bus Service provided pickup directly outside ones’ hotels when going to Sapa but for return the service stop at the Hanoi Sapa Express Bus Terminal and all passengers had to find their own way back to their hotels. 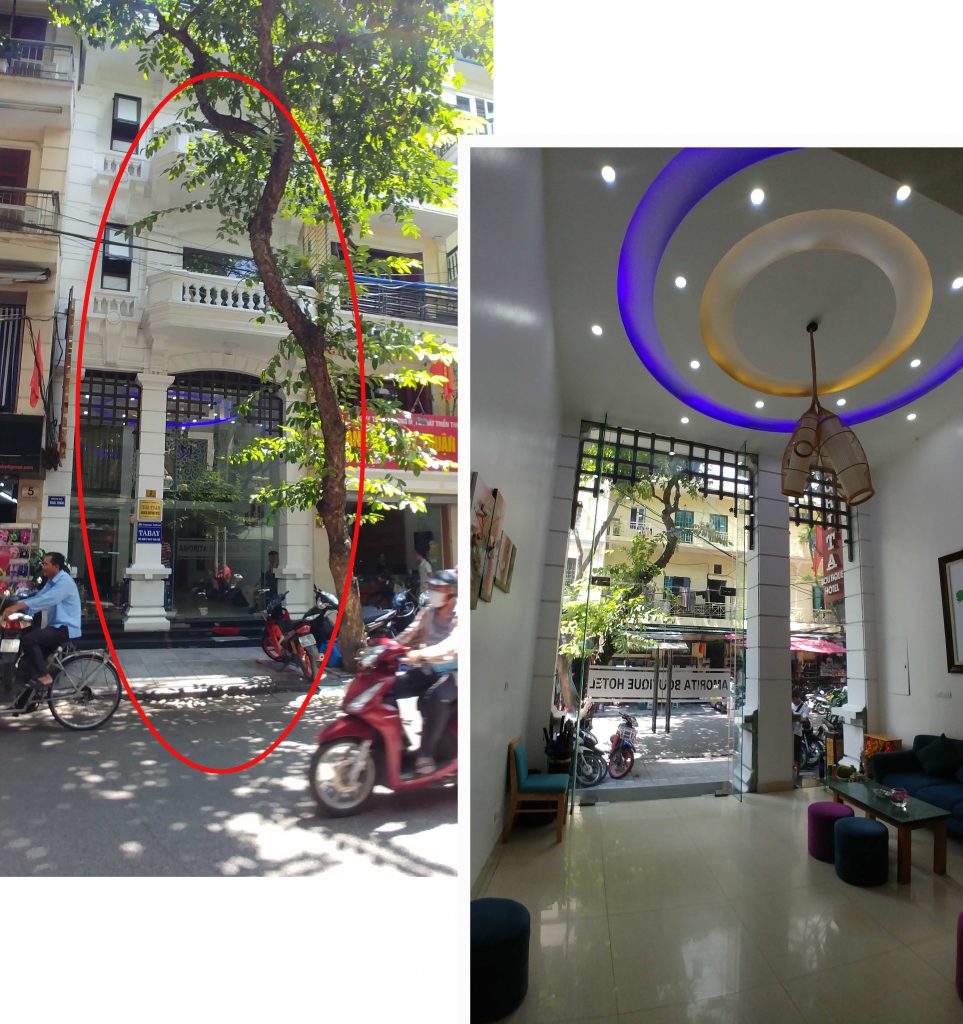 We booked Amorita Boutique from booking.com for two nights it was a double room with street view window, ensuite toilet and breakfast. The cost was vnd1904500 (usd81.15, sgd111) for two nights. Unfortunately the day before we checked in we received whatsapp messages from the hotel manager that there were some plumbing issues with our room. The only available room  (replacement) was a double room with an internal window at a cost of vnd752000(usd32 , sgd45) for one night. It was too much of a hazzle to look for another hotel so we accepted the replacement. 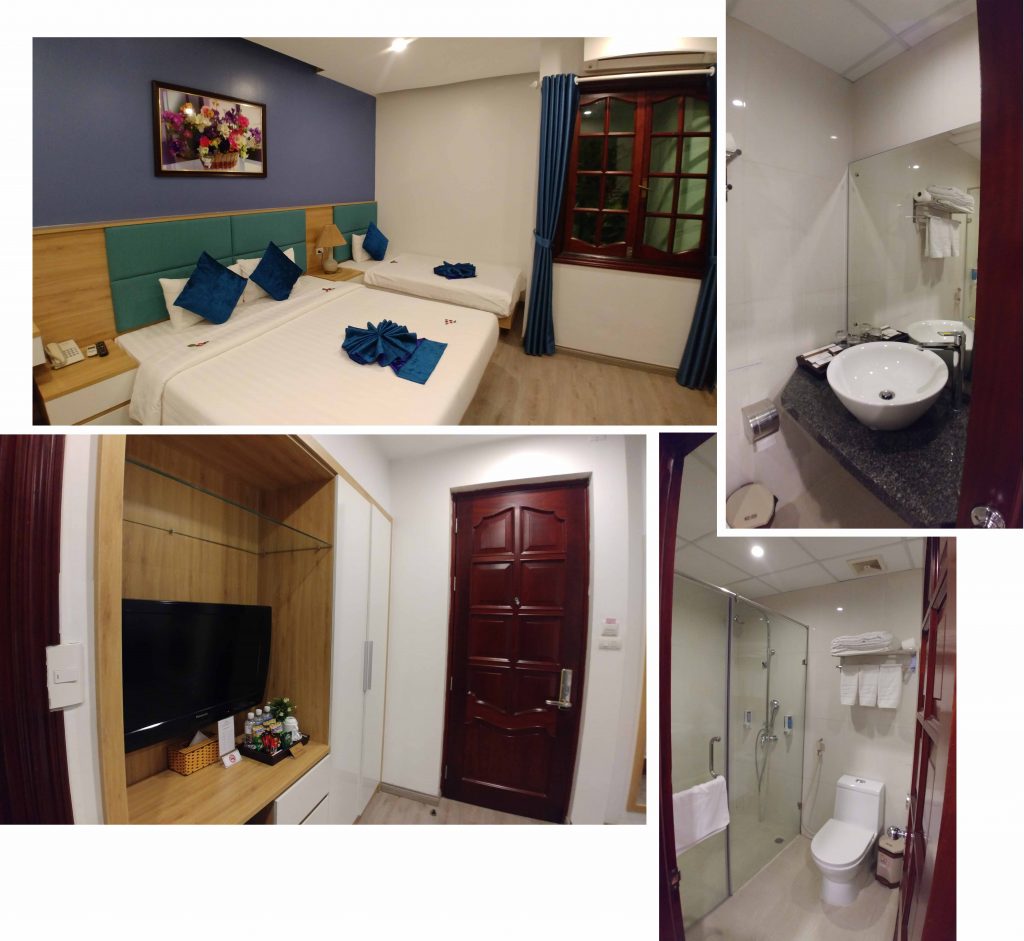 Our double room with internal window at Amorita Boutique

Our room looked very new, comfortable and very clean. The window opened into a very very small air well with no view. We usually booked room with windows and view, in this case since we were staying only for one night and coming in late and leaving early the next day made the “windowless” room bearable.