Plan for the next two days

It would be our final morning in Tam Coc, we did not have any plan to do any more sightseeing in Tam coc, we rather had a leisurely breakfast and waited for our transport to transfer us to Hanoi. We expected to reach Hanoi at about 2 pm to 3 pm where we would meet up with some relatives who would just arrive in Hanoi. The rest of the day and the next day would be to explore Hanoi particularly the old quarter.

By end of the two days
Prior to these two days we already had spent two separate nights in Hanoi Old Quarter. Both times there were only a couple of hours to spare. A dinner and a short walk then it was to bed and the next day after breakfast we were off to Sapa (the first time) and Tam Coc (the second time). This was the third time back to Hanoi, with two consecutive days we were able to explore the old quarter, eat street foods, buy local products and have many coffee breaks.

Generally the Hanoi Old Quarter was a bit chaotic, certain areas were dim and dinky and the roads were cluttered with vehicles especially motor cycles. To enjoyed the Old Quarter we had to put aside the mess, dirt and the crowd, to dig a bit deeper and very soon we found nice food, cheap deals, lovely coffee/cakes.  The only issue I had after all the eating was I had diarrhoea the second night, luckily I had medication with me and the problem cleared up by the afternoon the next day.

One of the first street food we ate was at chicken pho stall along Tran Phu road very near where Hanoi Stree Train crossed. We were there to see the famous Hanoi Street train but the train would not arrive till 7 pm. While waiting for the train to appear we went in search of dinner, the cost was vnd50000 (usd2.10, sgd 3.00) per bowl. A separate bowl of leaves was provided at no extra charge. 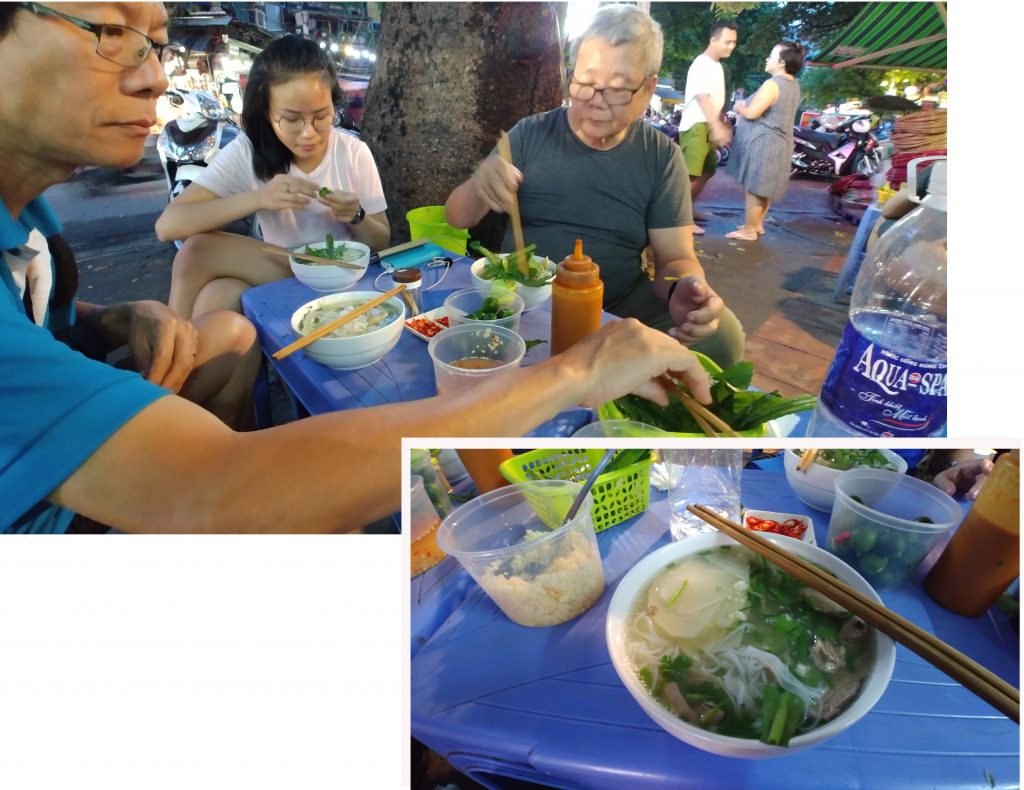 We stopped for supper at a place near our hotel( Hanoi Glance Hotel). We had vietnamese rolls, some fried stuffs another plate rice-wrap stuff. I enjoyed the vietnamese rolls very much as for the rest they were not my favourite taste.

Along the road there were also many desert stalls. I had dessert at a roadside stall near Lily Travel Agency a few days ago and enjoyed it very much. So I did not hesitate to stop at another road side stall for dessert. Unfortunately this second experience was not as good. The dessert was too sweet and the ingredients did not seem too fresh. Not all dessert-roadside-stalls were EQUAL! 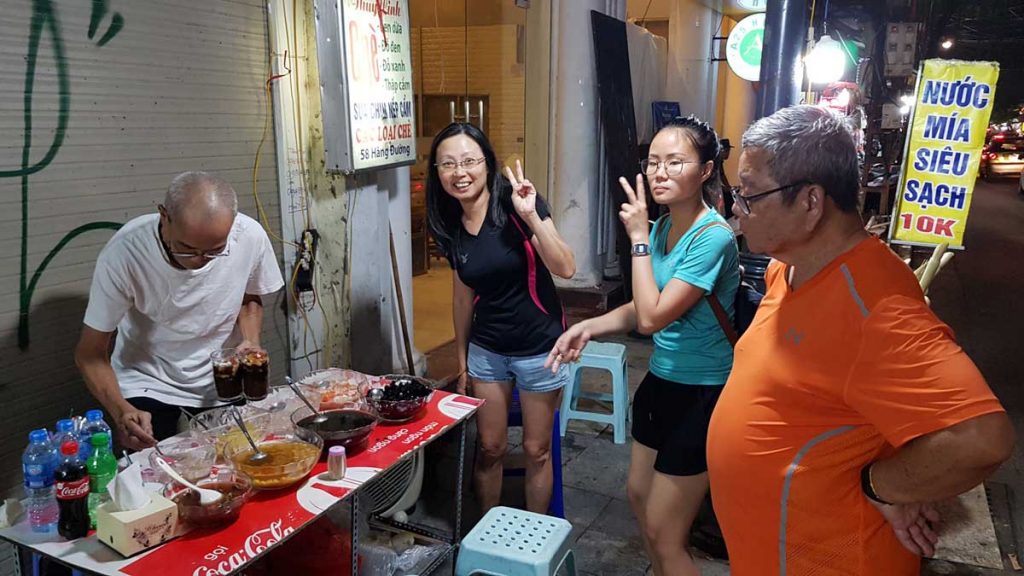 All around the Old Quarter there were  no shortage of  “up market” cafes operating day and night. On our second day we visited three cafes in one day! The first cafe was “Scoops” which was located on the southern end of the Hoan Kiem Lake. When we walked passed the cafe, it was about noon/lunch hours and we found the cafe pack with customers. Most of these customers looked like locals in their office attires enjoying coffee/ice creams after lunch. All the tables in the cafe were low table (coffee table height) and the chairs were short too. The chairs were positioned to face out of the cafe and the customers uniformly looked towards the main road. 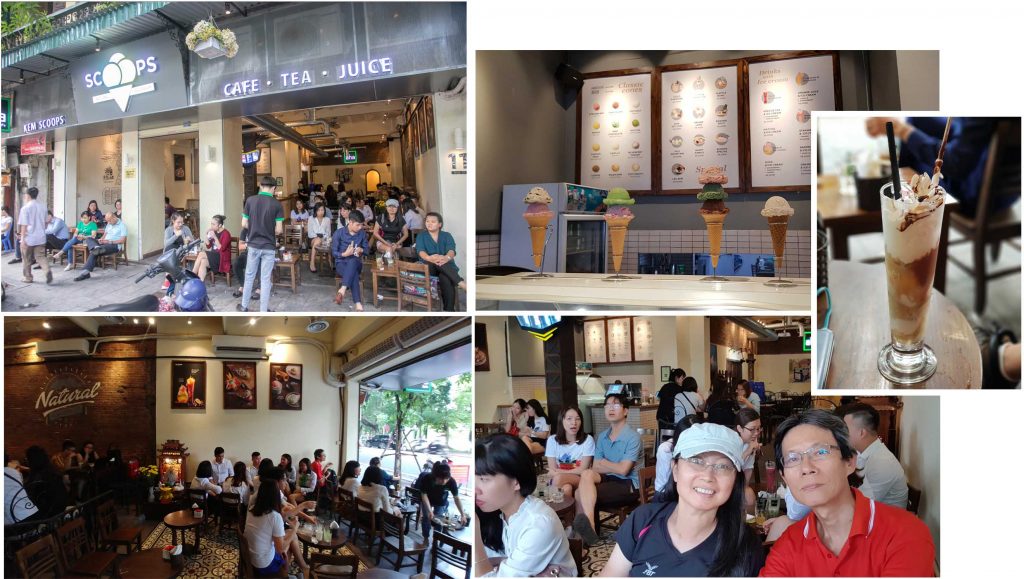 A coffee/ice cream break at Scoops

Interestingly we had noticed that in Hanoi and Sapa, many cafes had tables/chairs positioned to look out of the shops so “when we were in Rome we did what the Romans do” so we too faced out to look onto the busy dusty main road.

Our second cafe for the day was Conifer Coffee cafe in the vicinity of Thang Long Water Puppet Theatre. We had time to kill before the show started. We went into Conifer Coffee after seeing “egg coffee” on its black signboard outside its door. It was our first egg coffee and we did not know what to expect. 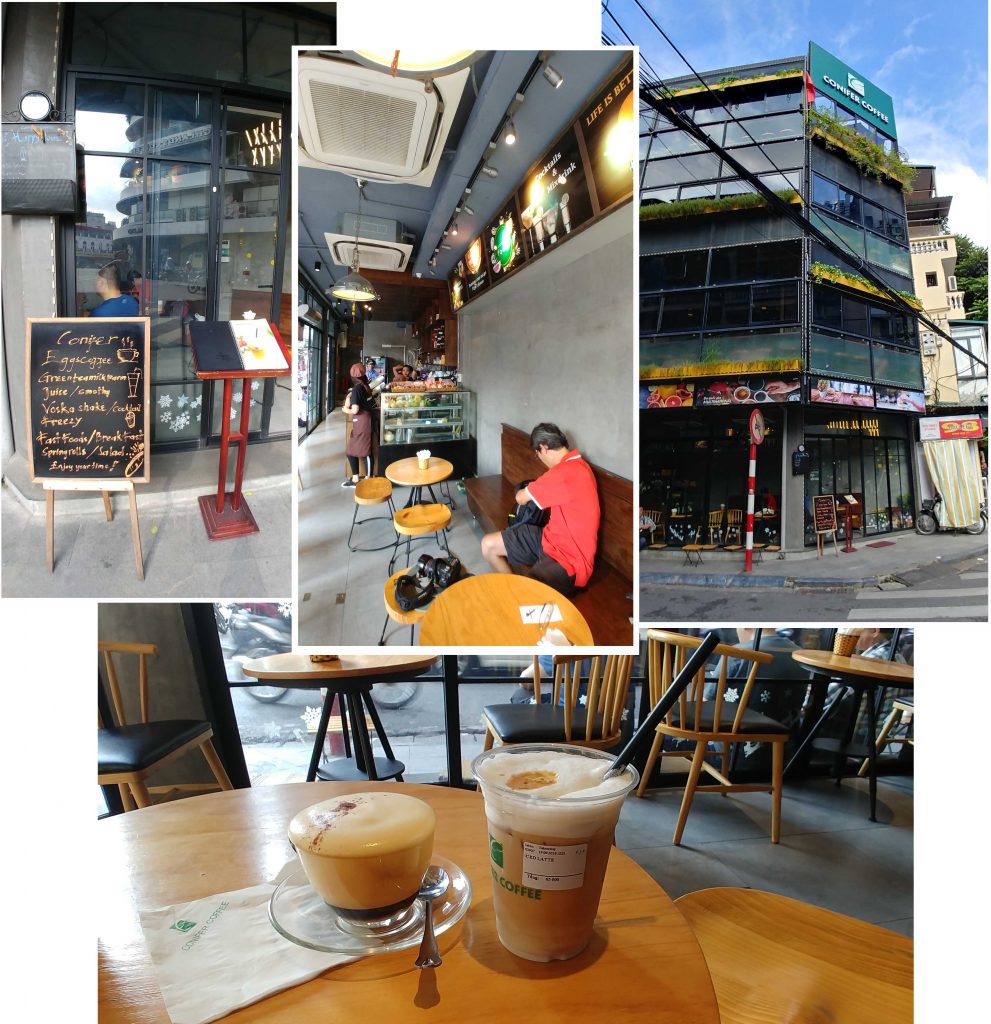 Afternoon coffee break in a street behind the water puppet theater

The egg coffee came , it was hot coffee and looked so foamy! Only a thin layer at the bottom was black coffee. The foam was sweet! Too sweet for my taste though I did like the foamy part.

Our third coffee for the day was at Gecko.This was the third Gecko cafes we visited so far. Two of the Gecko cafes were in Sapa and according to one Gecko waitress the two cafes were related. This Gecko cafe at Hanoi had a very different design so it probably was an independent cafe.  In the evening after meeting up with Yat Thong’s sister and family we had dinner, roamed the night market but on our way back to our hotel we saw a  “Buy one beer get one free” promotion outside “Gecko” and went in to have a nightcap. So five of us had three coffees, one tea and two beers for a total price of vnd160000(usd6.80, sgd9.60) 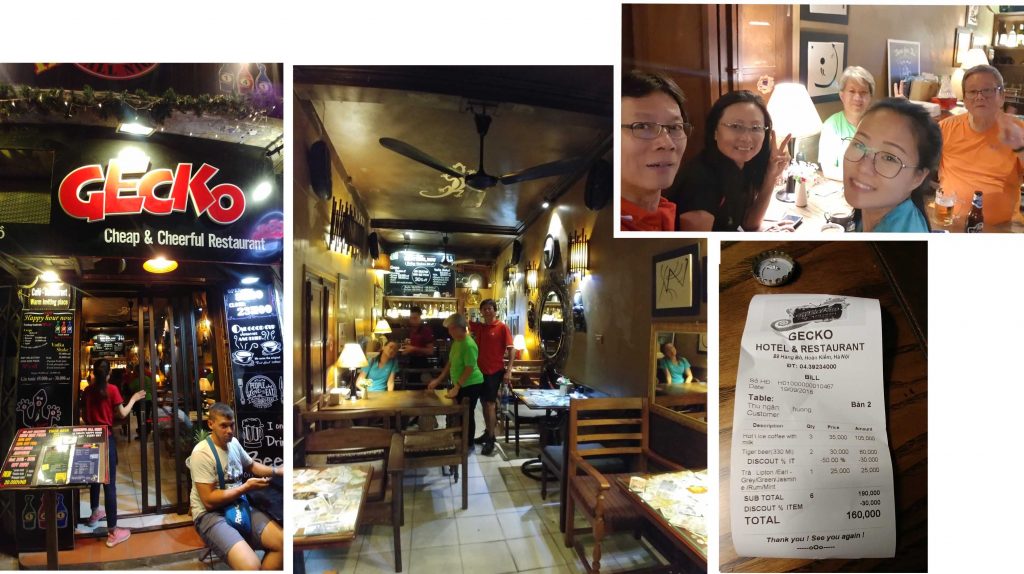 Thang Long Water Puppet Theatre was sited near the north part of Hoan Kiem Lake in the Old Quarter. We had just completed a walk around the whole lake when we stopped at the water puppet theatre. 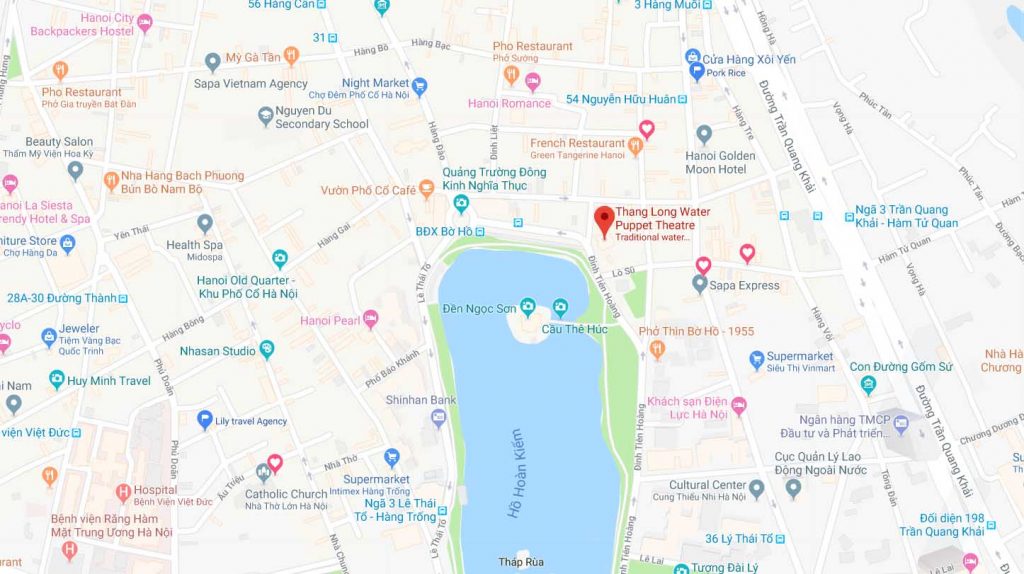 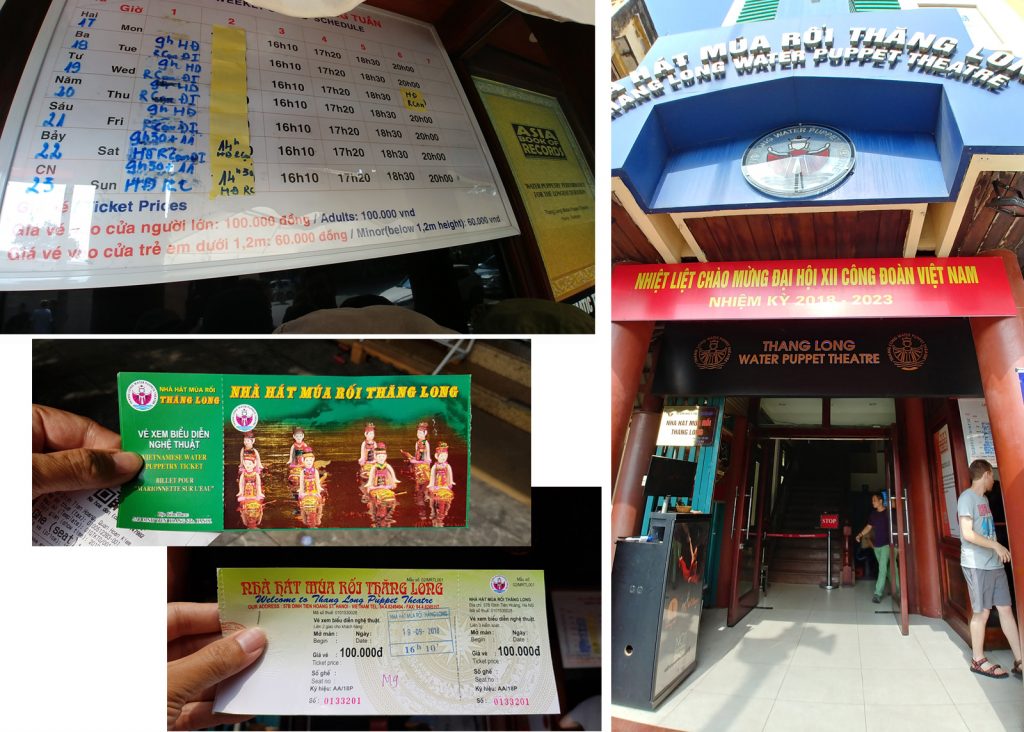 We were back at the theatre again at 4.00pm. There was already a huge crowd and a long queue to get into the theater. There was a separate charge for using camera to take photo in the theatre, but if we used handphone there was no additional charges. 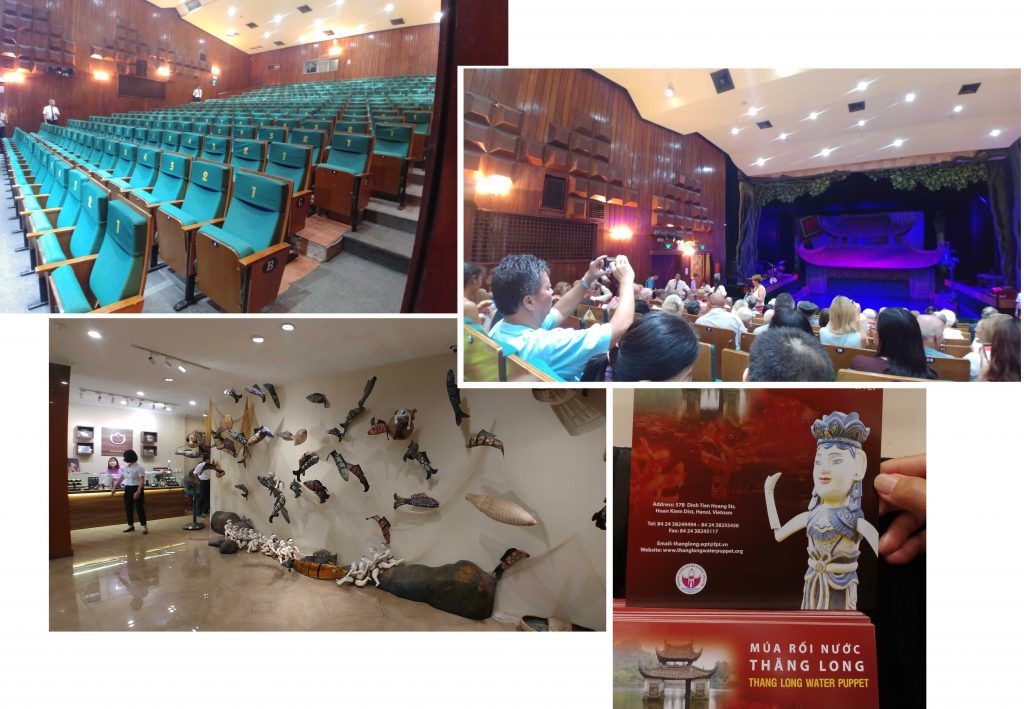 The show lasted 45 minutes. There were musicians and singers sitting on both sides of the water stage providing life music to go with the water puppet show. During the entire show we saw puppets zooming in and out of the bamboo curtains at the back of the stage. There was a bit of firework too. For the first 15 minutes the show was interesting. 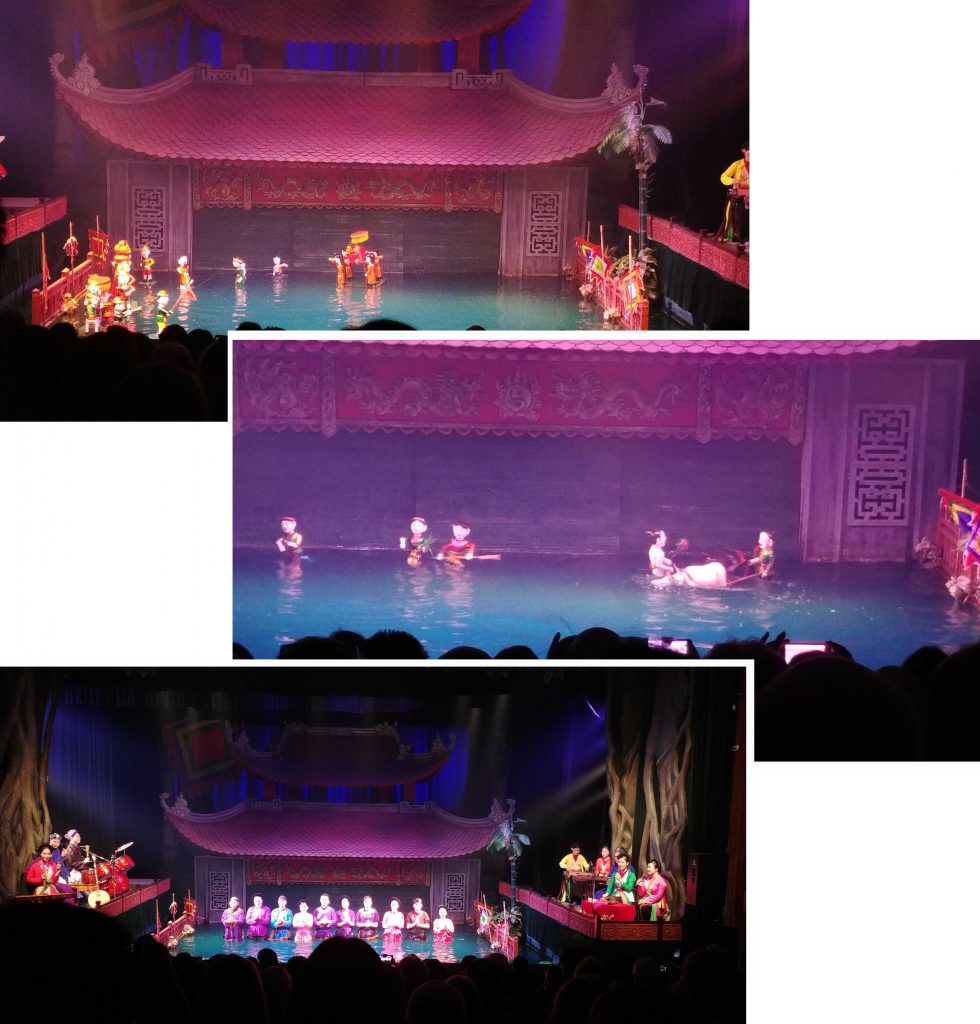 It was not easy to hold our interest after the novelty was over. Soon all puppets looked alike, there were either “human” or “animals”. There were just moving around in the water. We had no idea the story behind the “drama” as the song were sung in Vietnamese and there were no English subtitle or explanation to accompany the show. After 30 minutes, I closed my eyes and got some rest till the show ended.

As we roamed around the Old Quarter we stumbled across a Night Market, it was Cho Trung Thu Tryuen Thong Night Market. Row of row of stalls cramped the roads (closed to traffic) and they stretched on and on. There was a celebration mood and the locals seemed to be out full force thronging the stalls buying and bargaining. Most of the products seemed to be for kids. We were not sure if this was a “permanent night market” or this market was set up in celebration of the coming “Autumn Festival”. 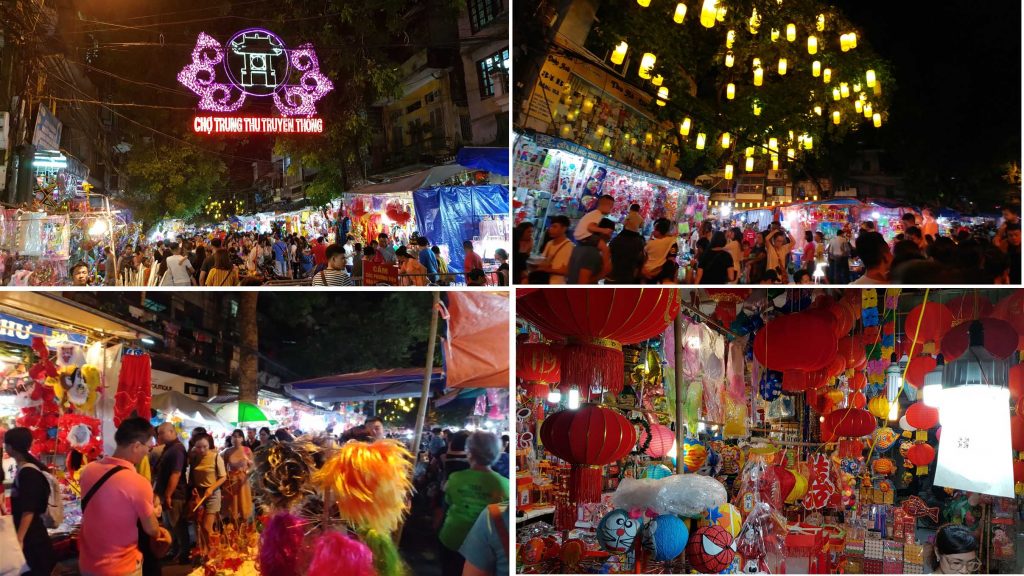 This night market was very unlike the one we visited the previous Friday night which at least sold clothes and bags that were meant for adults. This market was all about toys, lanterns, children products. Though we did not buy anything we still walked and squeezed through the whole length of the night market street just to absorb the festive ambience.

One of the major attractions at Hanoi Old Quarter was the nearby Hoan Kiem Lake so we went for a walk around the entire lake. On the way to the lake we passed a old cathedral, it was the Saint Joseph Cathedral. This church was built 1886, which made it about 132 years old. For a church not so old it was sure very old looking. 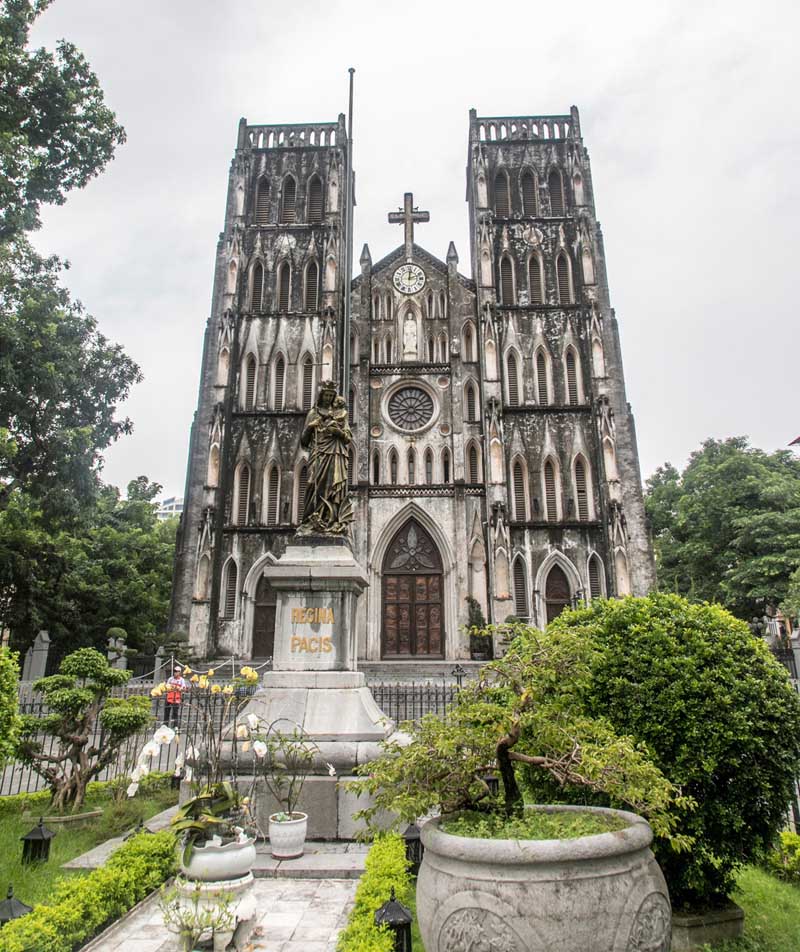 The walk from our hotel to the church was 750 metres, on the way we passed many different types of shops, shops selling cooking wares, shops selling fabric, laces etc etc. It was amazing to see so many shops in such a small area. After the church we proceeded to the lake which was another 400 metres. 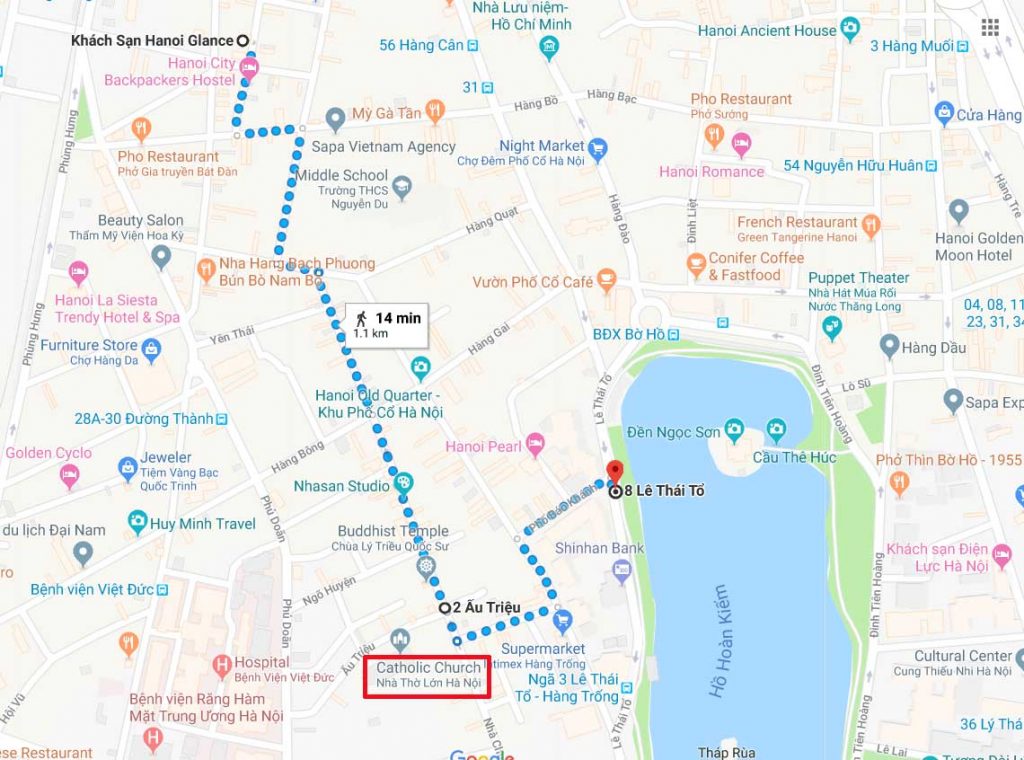 Hoan Kiem Lake was also known as the “Lake of the return sword” and was a fresh water lake.  According to legend, Emperor Le Loi was boating on the lake when a golden turtle (golden turtle god) swam up to him and requested the emperor to return a magic sword. This sword was given to the Emperor in his fight against Ming China by the Dragon King in. Since then the lake was named Hoan Kiem Lake, “Lake of the return sword”. To commemorate the event a Turtle Tower was built in the middle of the lake. The Turtle Tower was an ancient looking structure with four levels and many arch doorways 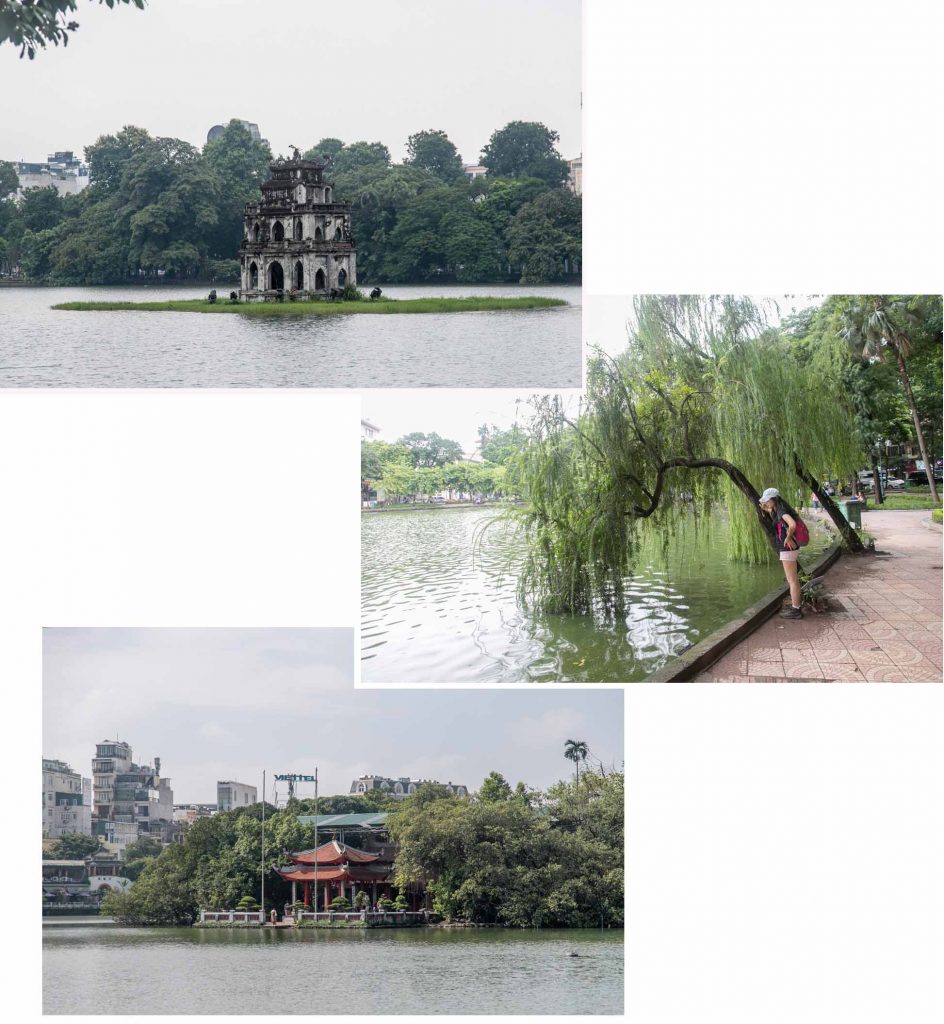 Hanoi also had a famous Street Train. The railroad tracks took up nearly all the space of the street with old building at both sides. 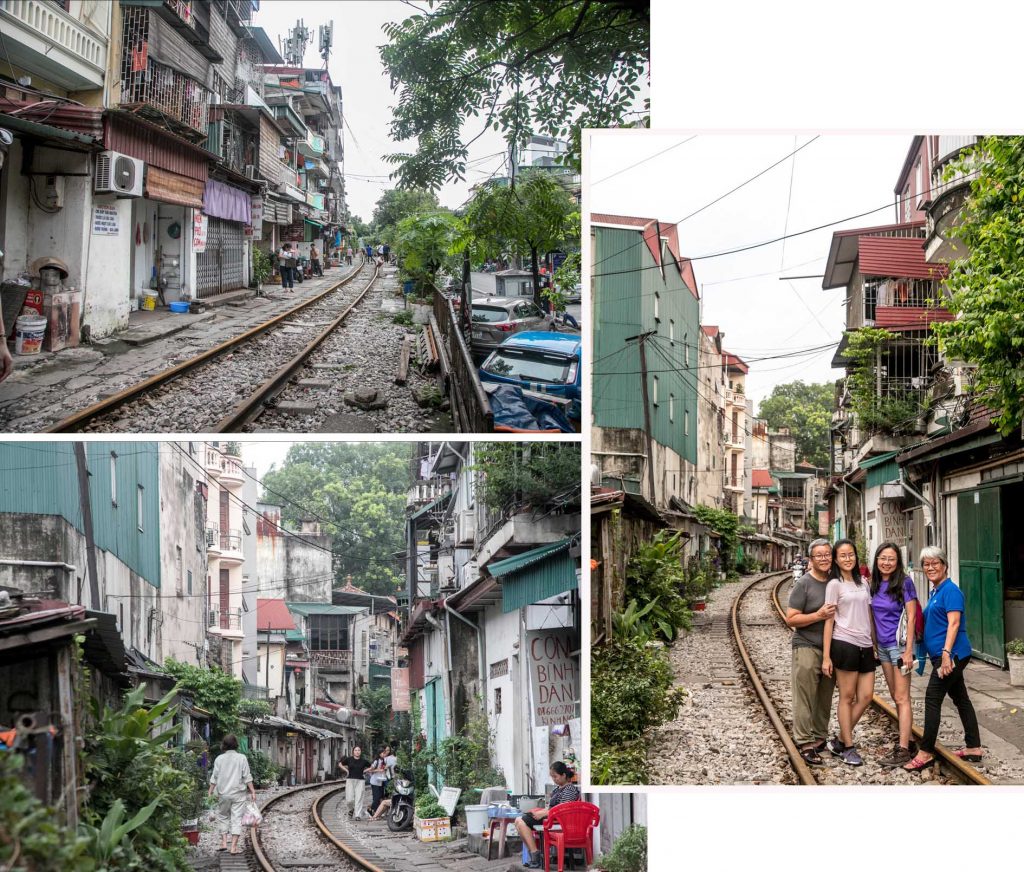 Railway tracks between the houses.

It was amazing to see the narrow spaces between the tracks and the walls of the building and wondered if the train would hit something as it “zoomed” by. We saw a notice put up by the locals indicating the timing when the train would come through. For weekdays it would be 6.00am, 6.15am, 7.10pm and 9.10pm. 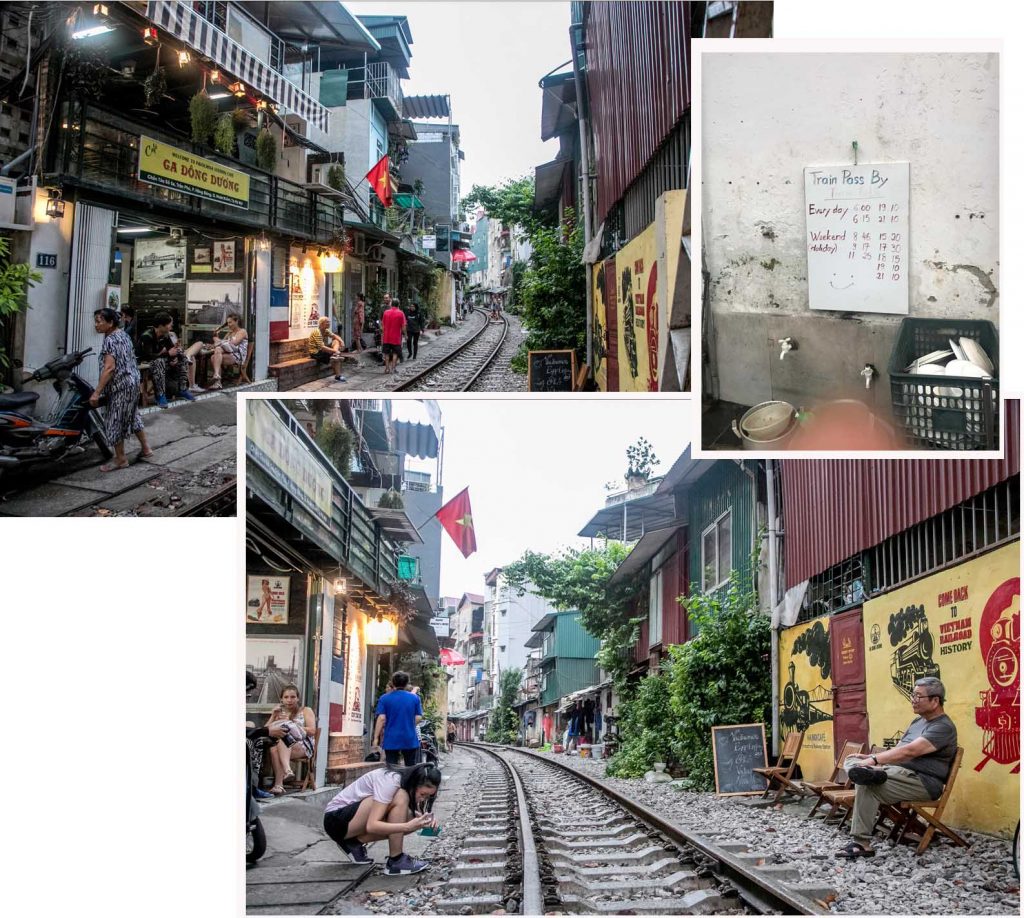 Around the streets where the train would pass

We were too early so we went off to have our dinner somewhere nearby and returned 20 minutes before train would pass. We waited and waited and more visitors arrived, all were there to see the train. Finally the train came and it was a long long train. 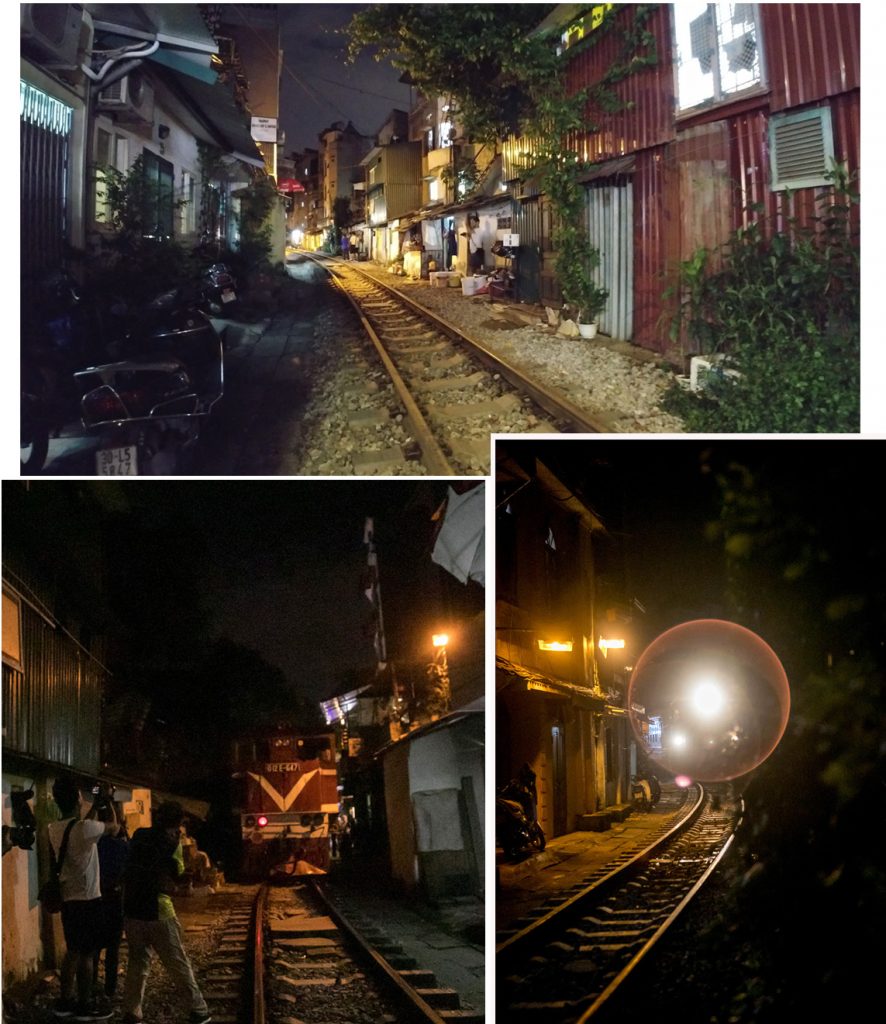 Originally the plan was to stay for one night at Hanoi Hotel Glance before leaving for Tam Coc Trip the next day but due to Typhoon Mangkult. We had to reshuffle our Tam Coc Trip and Halong Bay Trip so we ended with two nights in Hanoi. Since we had consecutive nights in Hanoi we wanted both nights to be in the same hotel using the same room. We quickly went into booking.com to place a reservation for the second night with instruction to have the same room for both nighst. The room was a double room (with internal garden window).  The charges was vnd600000 (usd25.60, sgd36.00) for the first night and vnd73600 (usd32.60, sgd45.00) for the second night. The first night was much cheaper because we booked the room about one month in advance. The room came with ensuite bathroom and breakfast for two.

Hanoi Glance Hotel was not one of our selected hotels in the Old Quarter because for the same price or less we could book other hotels nearer to the lake.  We booked Hanoi Glance Hotel because we wanted to meet Yat Thong’s sister and family who would be staying there. 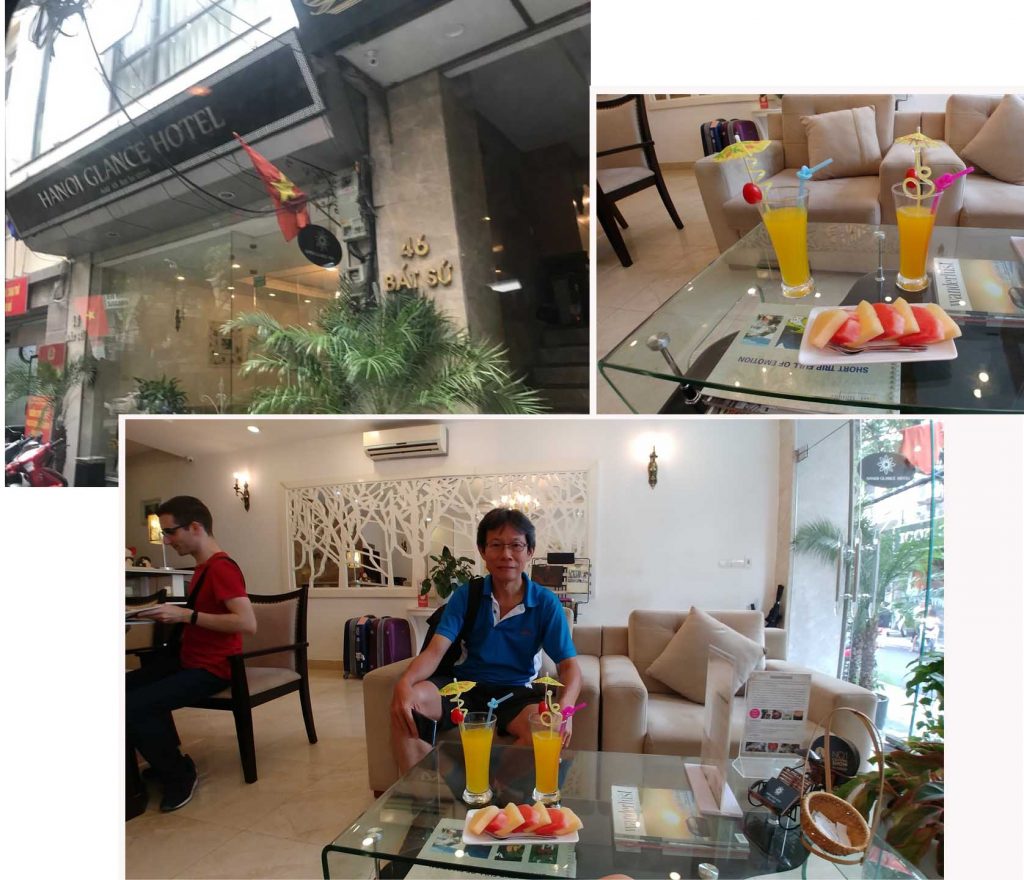 On arrival at Hanoi Glance Hotel we were greeted with drinks and fresh fruits. Yummy and cooling! While checking in the hotel manager told us that she would upgrade us to it best room for one night at no additional charges. Though it was nice we declined because if would be a hazzle to shift our stuff to a different room for the second night. We rather not upgrade but stay in the same room for two nights. In the end the manager upgraded us to the “best room” for two nights. 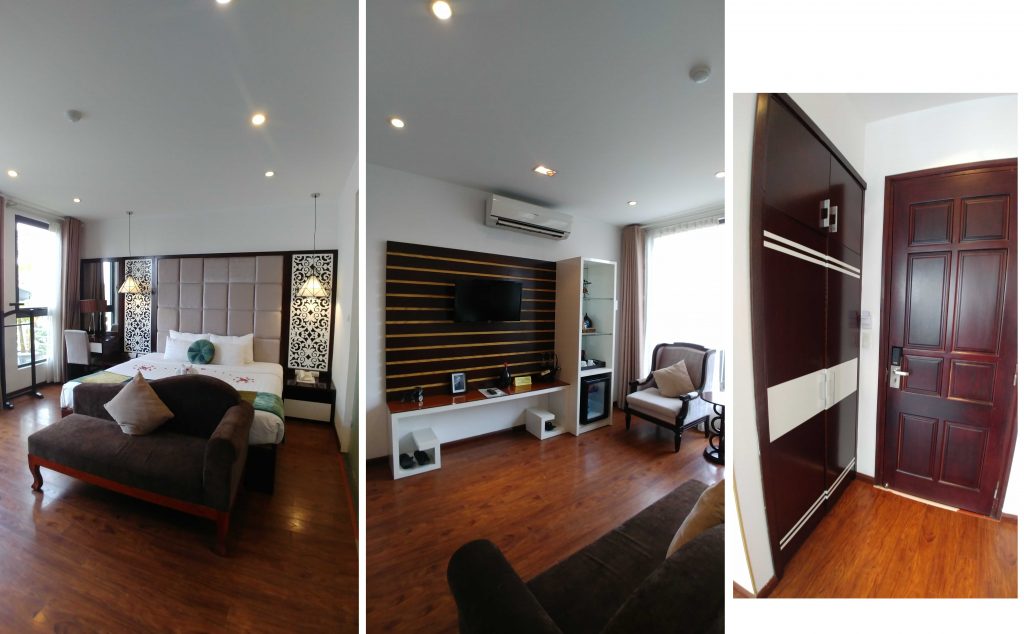 The best room was on the fifth floor and it was huge. Beside the king size bed, there was a three seater sofa, two armchairs and a coffee table. The attached toilet was also very big too and was well equipped with all the necessary toiletries. 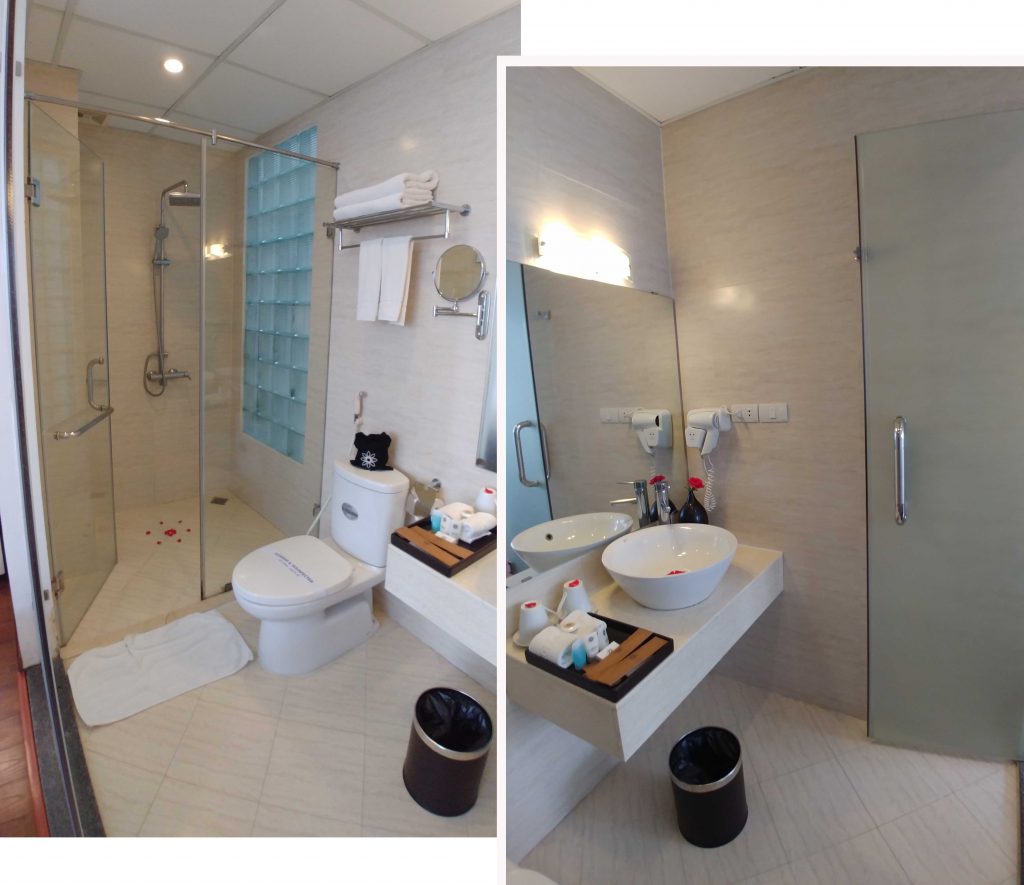 The unique feature of this “best room” was that it had a large balcony with comfortable sitting area. Wow the upgrade was absolutely wonderful. This upgraded room was twice the cost of our original booking and we were upgraded with no extra charges. A wonderful start! 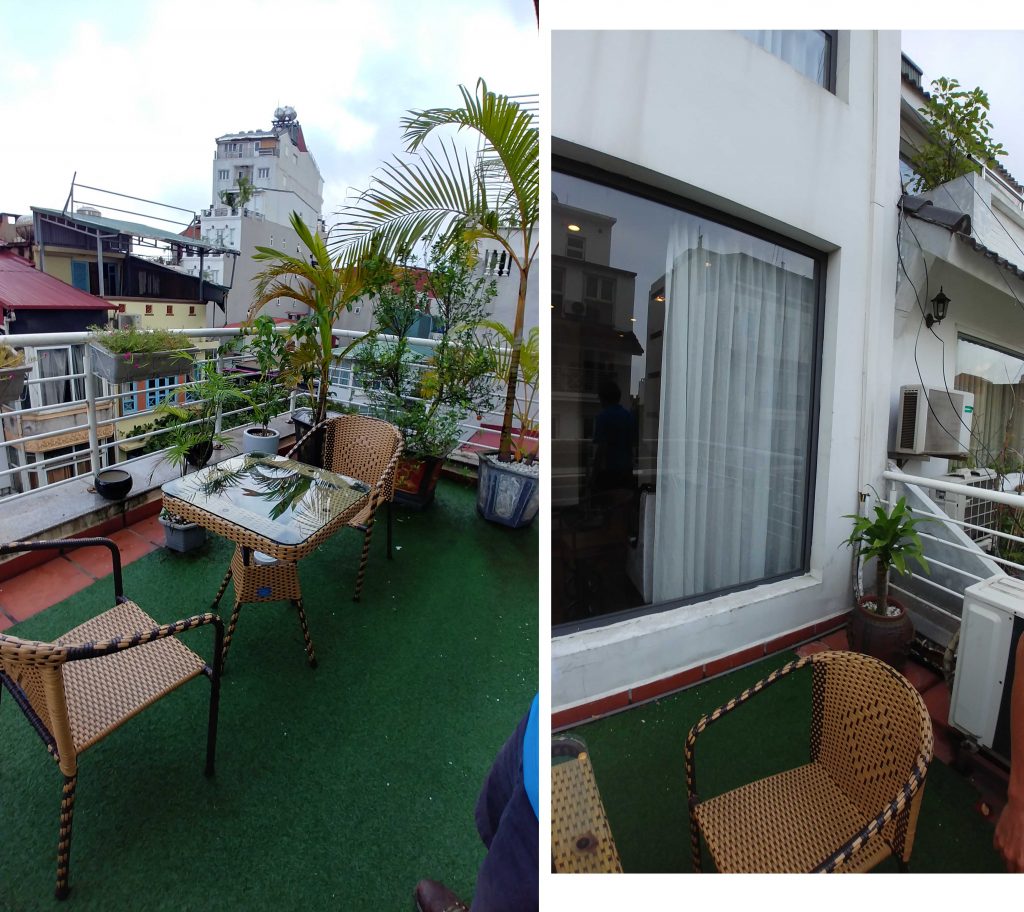