Our plan was to visit Chatuchak Market, eat some local meals and go on a evening cruise on River Chao Phraya.

We had a simple breakfast consisting of vege, eggs and ham that were bought from the 24hr supermarket last night. Tea was supplied by the apartment. The meal was easily prepared in less than 15 minutes. The idea of  a simple breakfast was to leave our stomachs space for street food along the way to our destination. 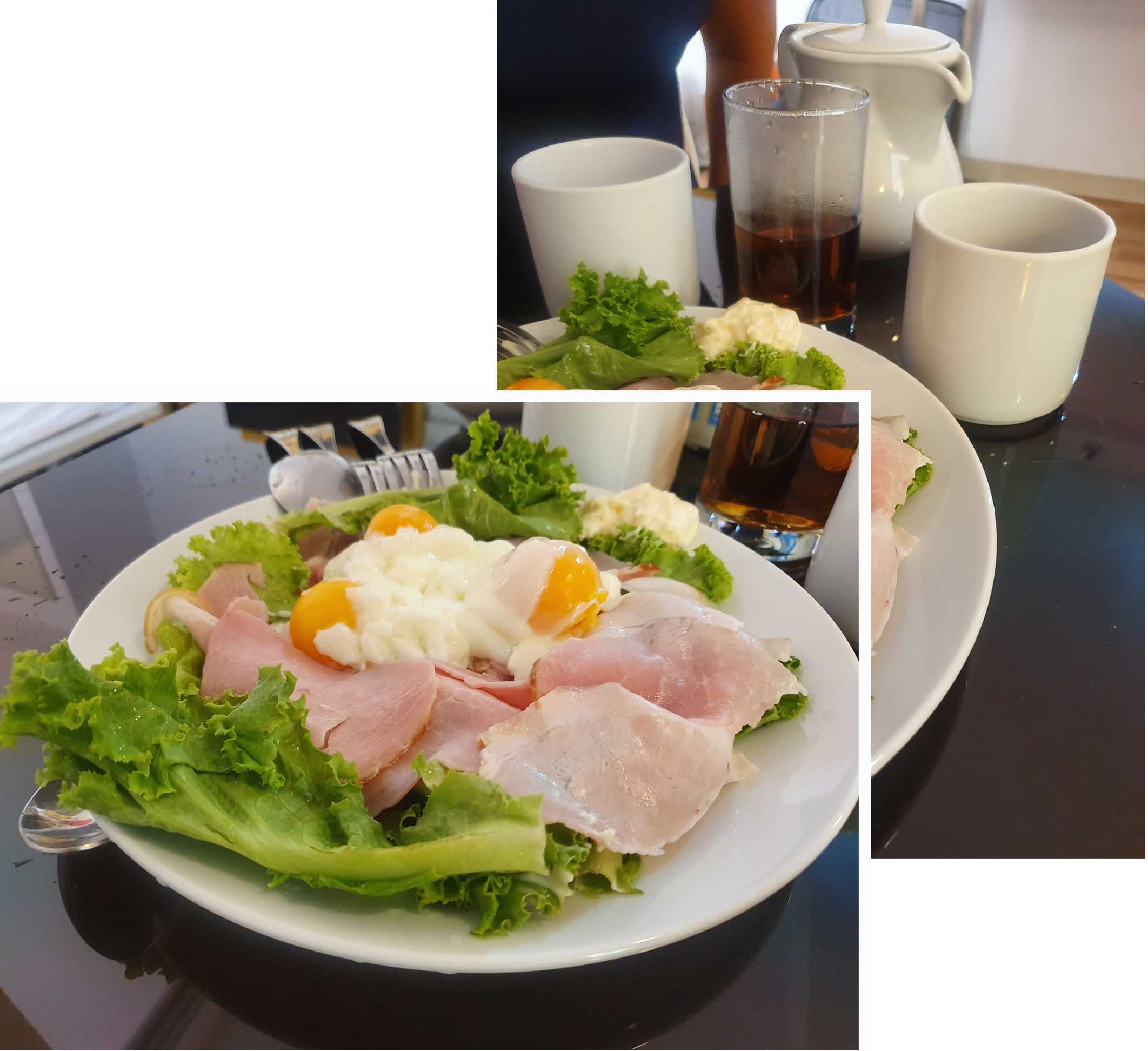 Getting to Chatuchak Market

Our first destination for the day was Chatuchak Market, a huge weekend markets with more than 8000 stores. We were considering if we should drive, take a cab (Grab) or go by skytrain. We often heard about the nightmarish vehicle congestion in Bangkok specifically before and after office hours. We were not sure if congestion also took place on weekend. So if there was going to be a congestion, driving our rental car or “Grabbing” a Grab would take about the same amount of time to reach our destination.

A ten minutes walk (400 metres) brought us to Ahok BTS(skytrain station) next to Terminal 21. On the way we walked past a huge construction site which was right next to our hotel and were immediately worried about the noise. We counted our blessing that it was a weekend and the worksite was closed. 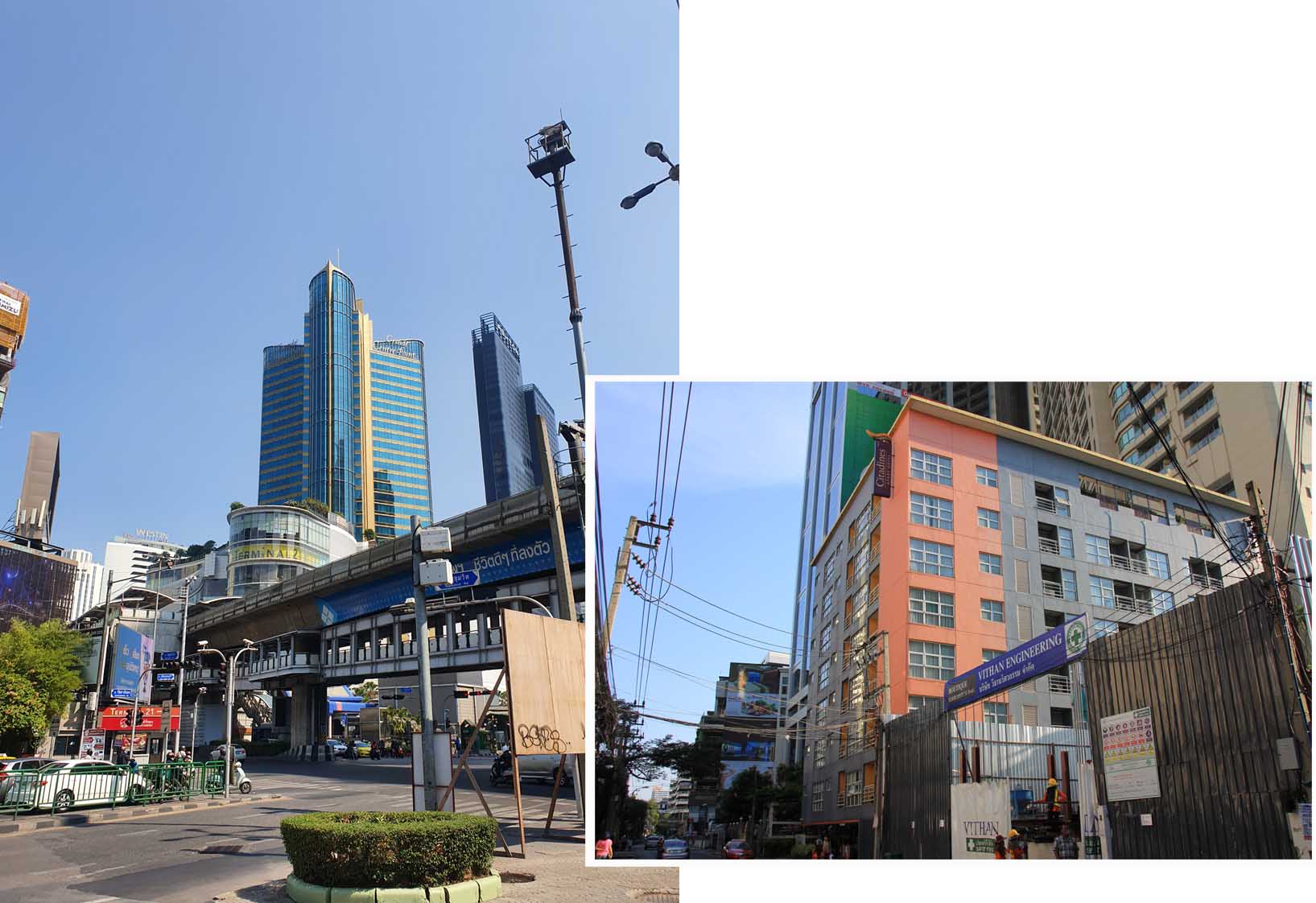 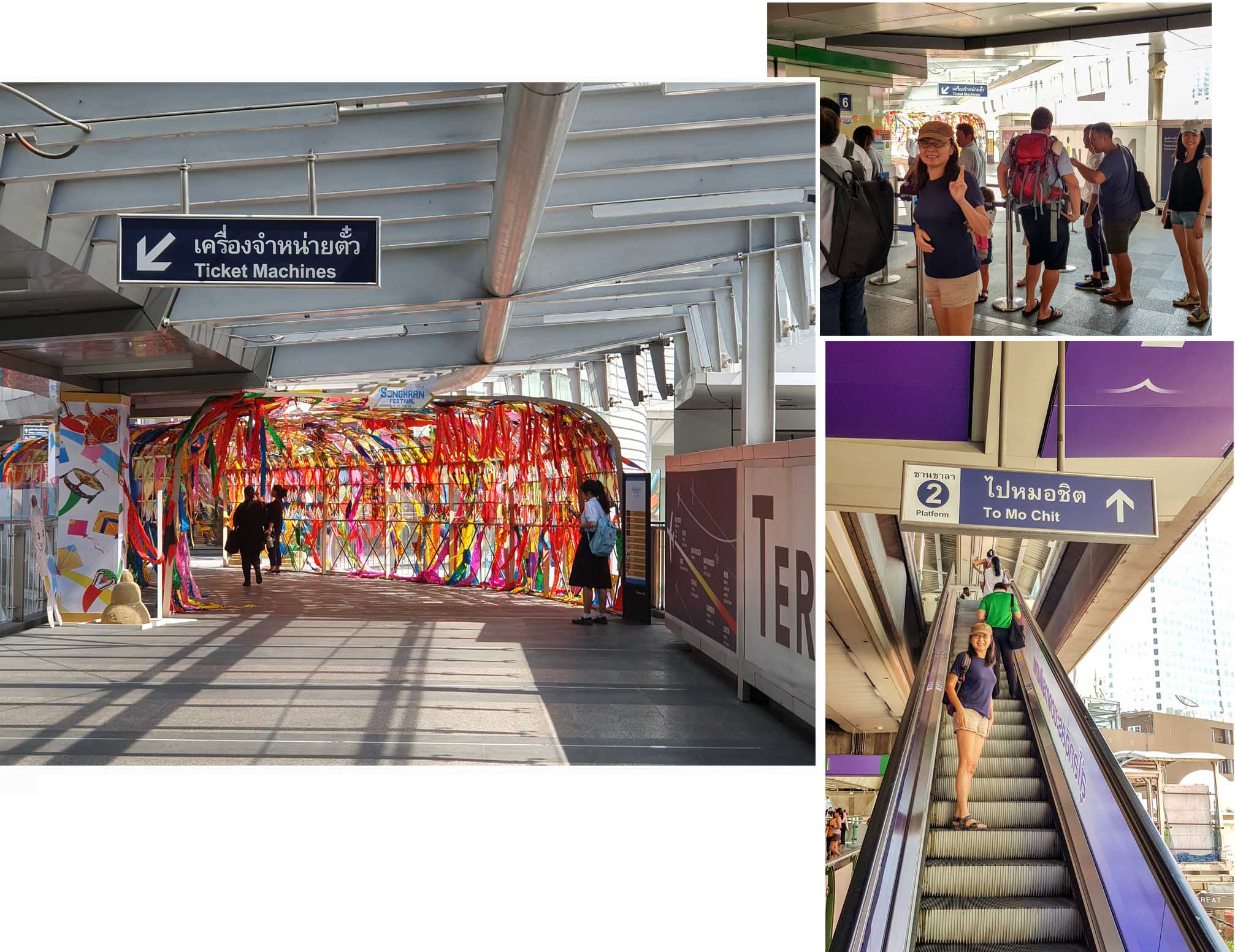 At Asok station we hopped onto the skytrain (green line) and rided till the last station (11 stops) which ended at Mo Chit Station where Chatuchak Weekend Market was located. The train journey took no more than 20 minutes and costed 44 baht ($1.90 sgd) per person.

On the platform of Mo Chit Skytrain Station we could see a tall white building with a huge sign on its roof “MIXT CHATUCHAK. That building was a big shopping complex beside Chatuchak market so that would be the direction we should be walking toward.

Once we exited the turnstiles/gantry of the skytrain platform we saw a Cha Tra Mue outlet. Cha Tra Mue was a Thai tea brand that started in 1954 and in the recent years it had set up its own outlets in Thailand and a couple of oversea countries and Singapore was one of them.. 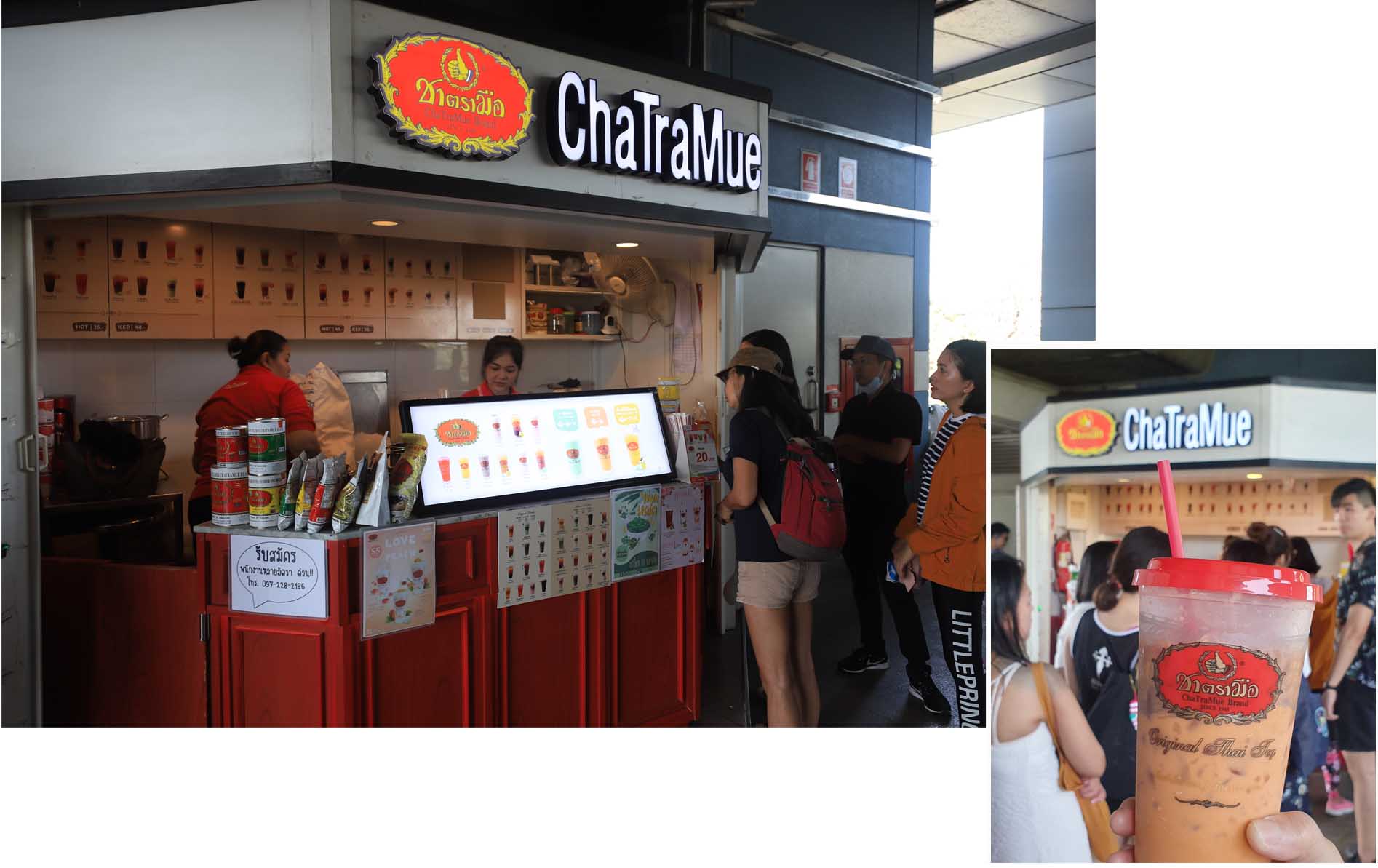 We ordered two Thai milk tea and each costed 40 baht ($1.75 sgd). The weather was getting terribly hot so the ice tea felt wonderful as we walked towards Chakuchat Weekend Market. It was not a long walk and we enjoyed looking at the stuffs displayed in the colorful stores that lined the pavement on the road. Soon we saw the sign “Chatuchak Weekend Market” which we supposed was the entrance to the market. 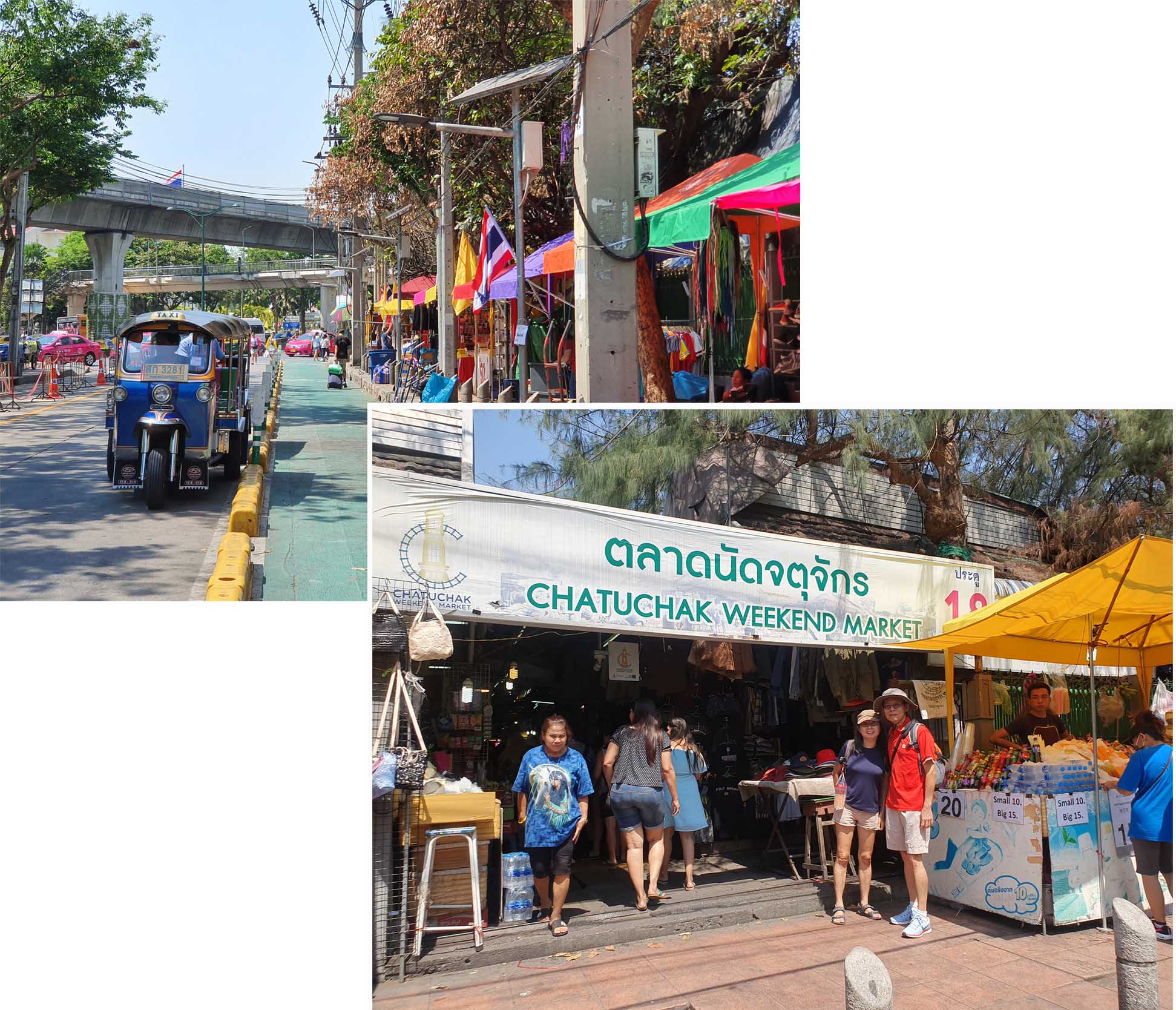 An entrance to Chatuchak weekend MarketOne of the stores that captured our attention was selling denim shorts. Lin Ying was eagered to get a couple of shorts. Each shorts was going for 200 baht ($8.70 sgd) and there were plenty to choose from. There was no changing room to try out the shorts instead the store holder passed Lin Ying a long skirt to hide as she changed in and out of the shorts in searched of a nice one. 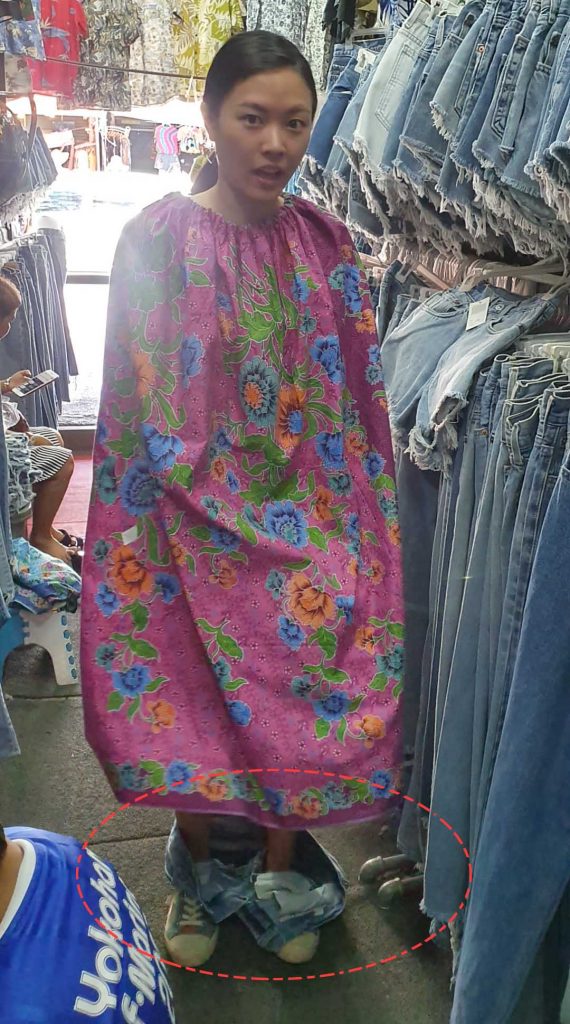 Changing under a long skirt

Chatuchak Weekend Market reminded me of Singapore Bugis Street Market where there were tons of small stores selling inexpensive stuffs of all types.Chatuchak had many more stores than Singapore’s. There was no way we could visit all the 8000 stores which were layout into several sectors and lanes.

The advice given to us was to first decide the products we wished to purchase then based on a Chatuchak map to zoom into the stores that were relevant. Unfortunately not all the stores selling the same type of products were clustered together and as we moved around in search of them we got distracted by other stores. After about two hours it was near to noon and the place was getting incredibly hot. We were heat exhausted and had to get out!

For lunch we decided to go to Charoen Krung Road, Silom where we knew of two famous restaurants, one selling Roast Duck/Meat and the other Baised Pork Knuckle. Getting from Chatuchak Weekend Market to Charoen Krung Road was very easy. We walked back to Chit Mo BTS Station and boarded the BTS Sukhumvit Line (green line) and after 7 stops changed onto the BTS Silom Line (dark green line) at Siam BTS station. On the dark green line we rode 5 stops and exited at Saphan Taksin BTS Station. 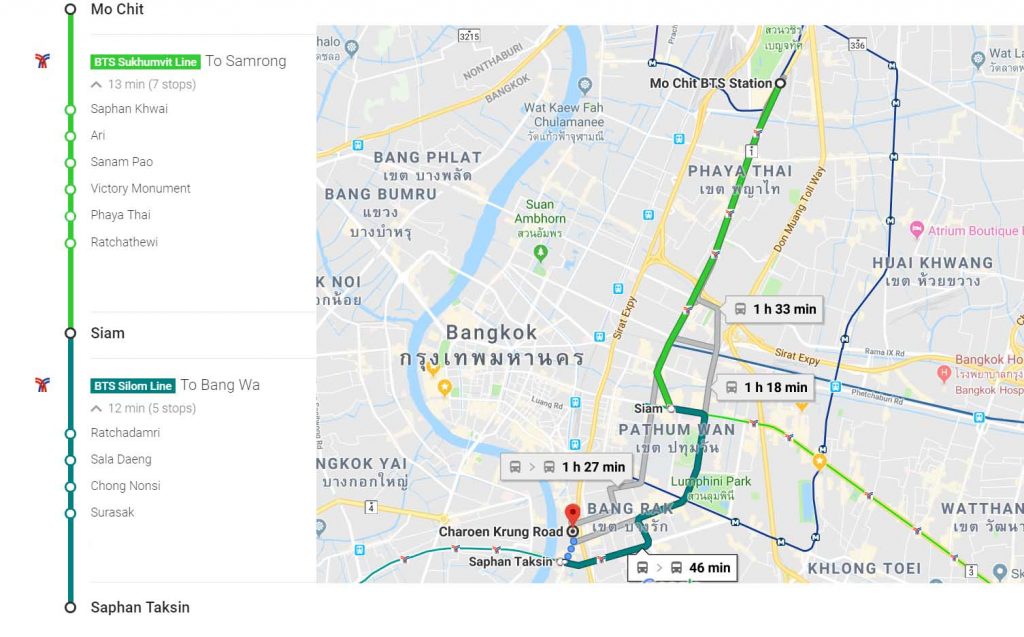 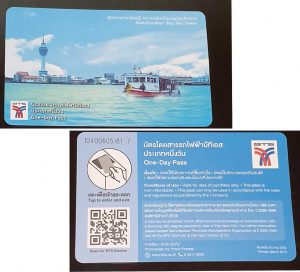 This time instead of buying 3 oneway BTS tickets we bought 3 day tickets at 140 baht ($6 sgd) each. So far we found BTS a great way to travel and since we still had four trips to go for the rest of the day it would be more economical to get the day tickets. The day tickets would end once the day was over, they were not for 24 hours.

As for lunch we could not decide if we should eat roast duck/meat or baised pork knucle. So the best way would be to explore both stores before deciding on  one. 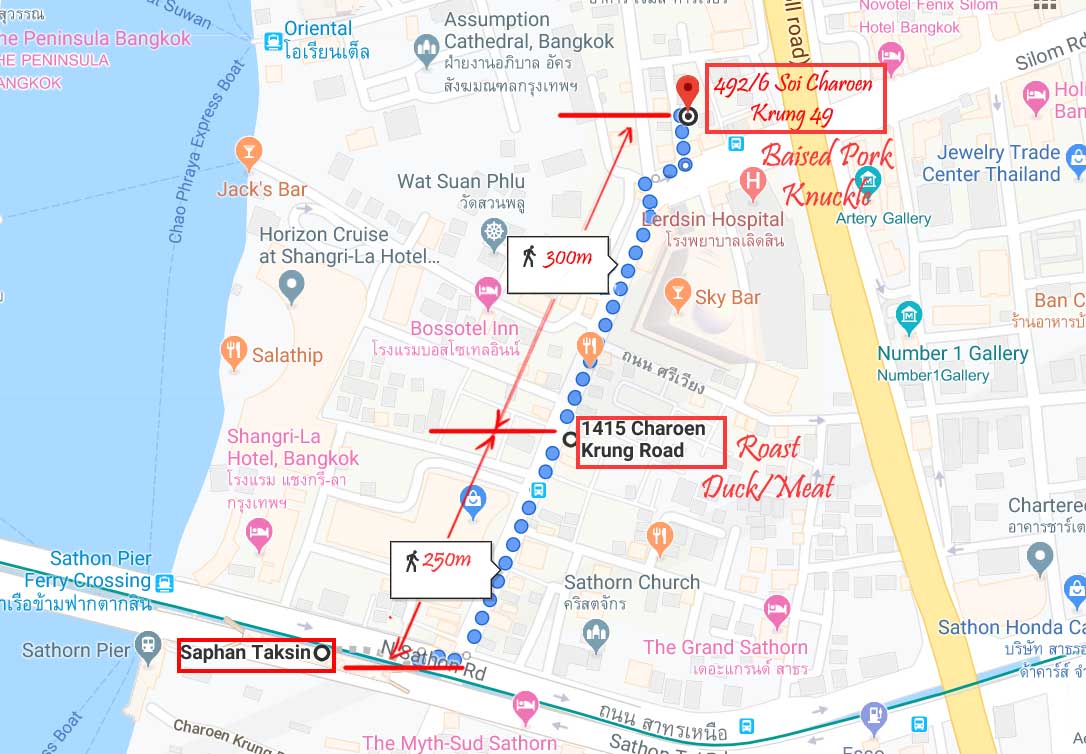 What a relieve that the restaurant had aircon! It was lunch hour and the place was fully packed with people. Fortunately there were more tables on the upper level! So up we went though a narrow stair and finally found a an empty table! 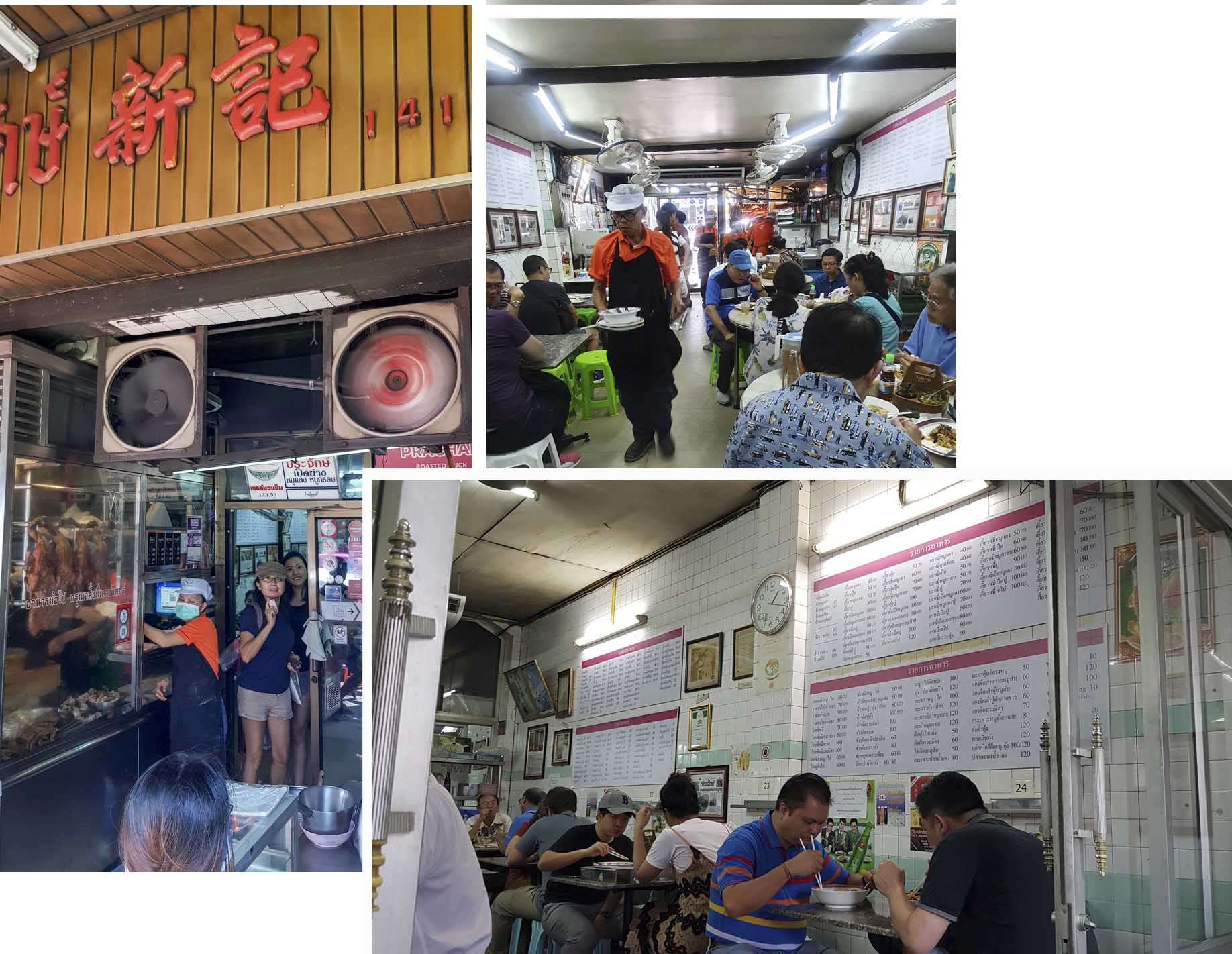 We ordered a plate of roast duck, a plate of roast meat (combination), a bowl of “wanton”, some chinese buns and three cups of Thai milk tea. The entire meal came up to 270 baht ($11.70 sgd). The roast duck/meat were soaked in gravy which was different from those we ate back home. Taste wise they were okay. 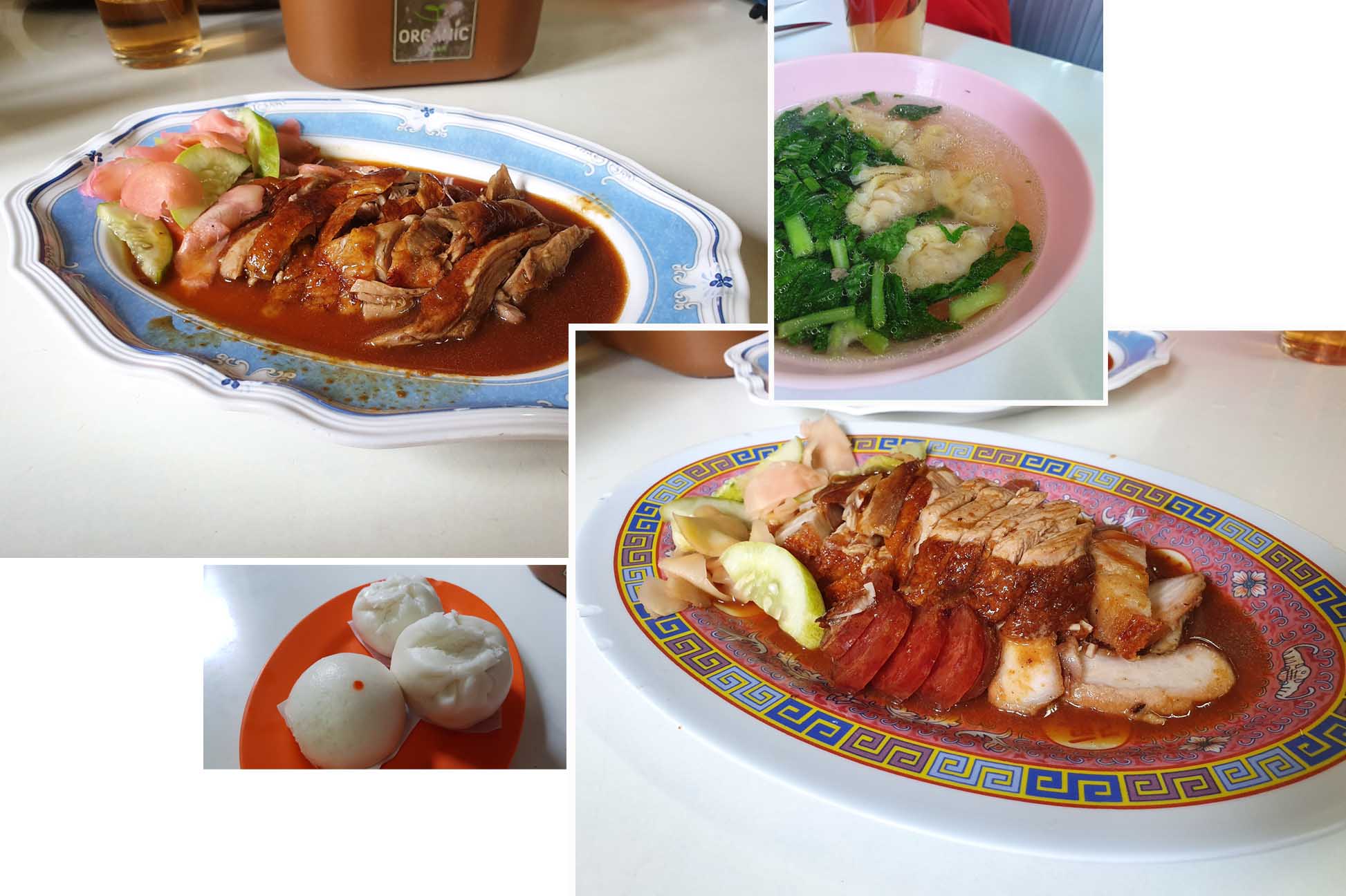 After lunch and feeling rested we walked another 300 metres down the road to the Baised Pork Knuckle restaurant. The idea was to buy some baised pork knuckle and bring it back to our hotel and eat it when we no longer felt full. Unfortunately at 2 pm in the afternoon the Baised Pork Knuckle restaurant had already sold out all its pork knuckle! The owner told us to come back at 8.30 am the next day!!

After lunch we were back to our hotel to escape from the scorching heat. It was wonderful to turn on the aircon and chilled in our room. There was a swimming pool on the roof but it was just too hot to go for a swim. 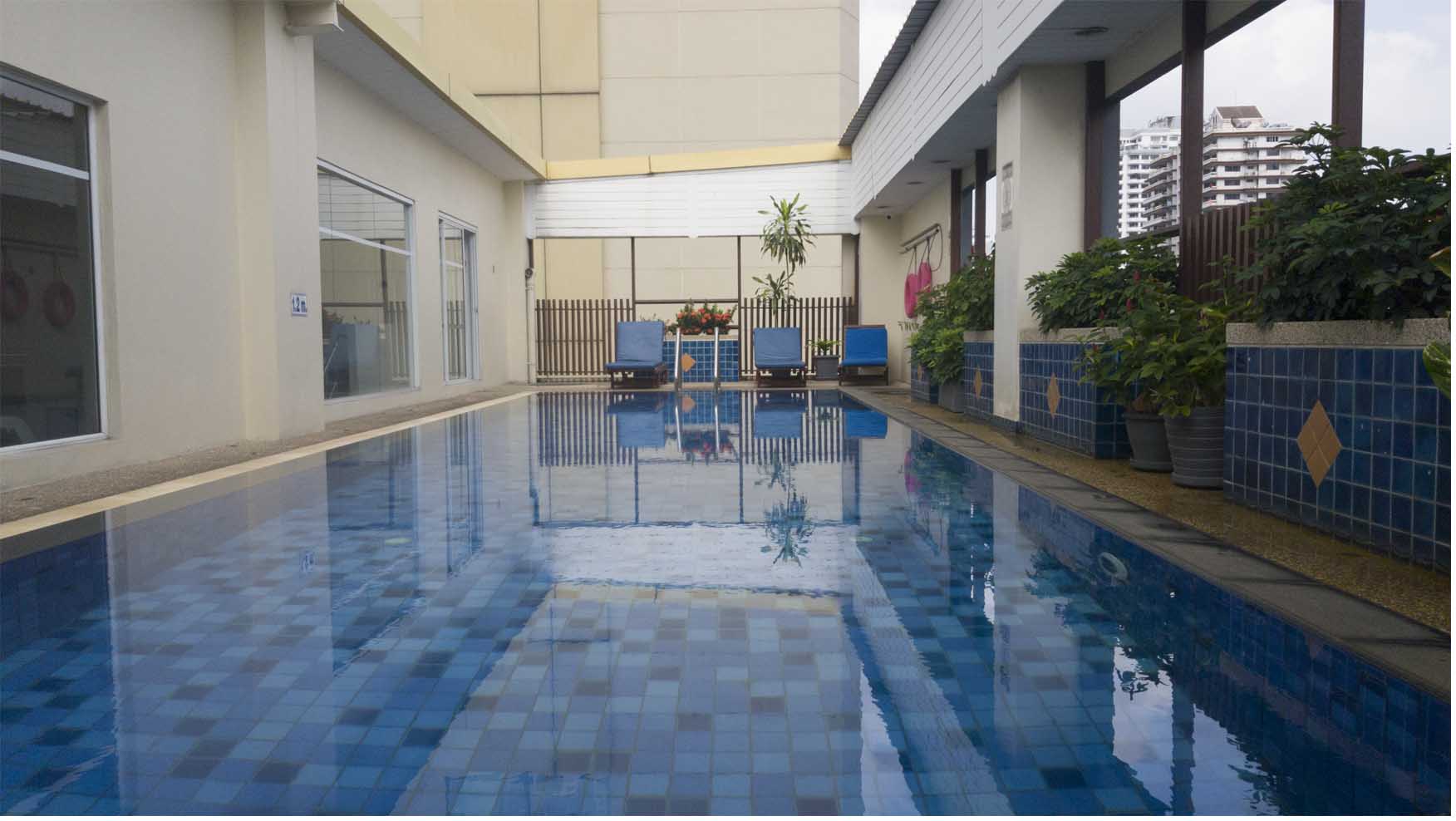 At Sathorn Pier we looked for a queue to a free shuttle boat ride between Sathorn Pier and Asiatiquie Pier. We found the queue easily as it was just next to a huge red “Asiatique” banner. The queue was pretty long, luckily the frequency of the boat ride was every 15 minutes. The free rides operated from 4.30pm to 11.30pm. 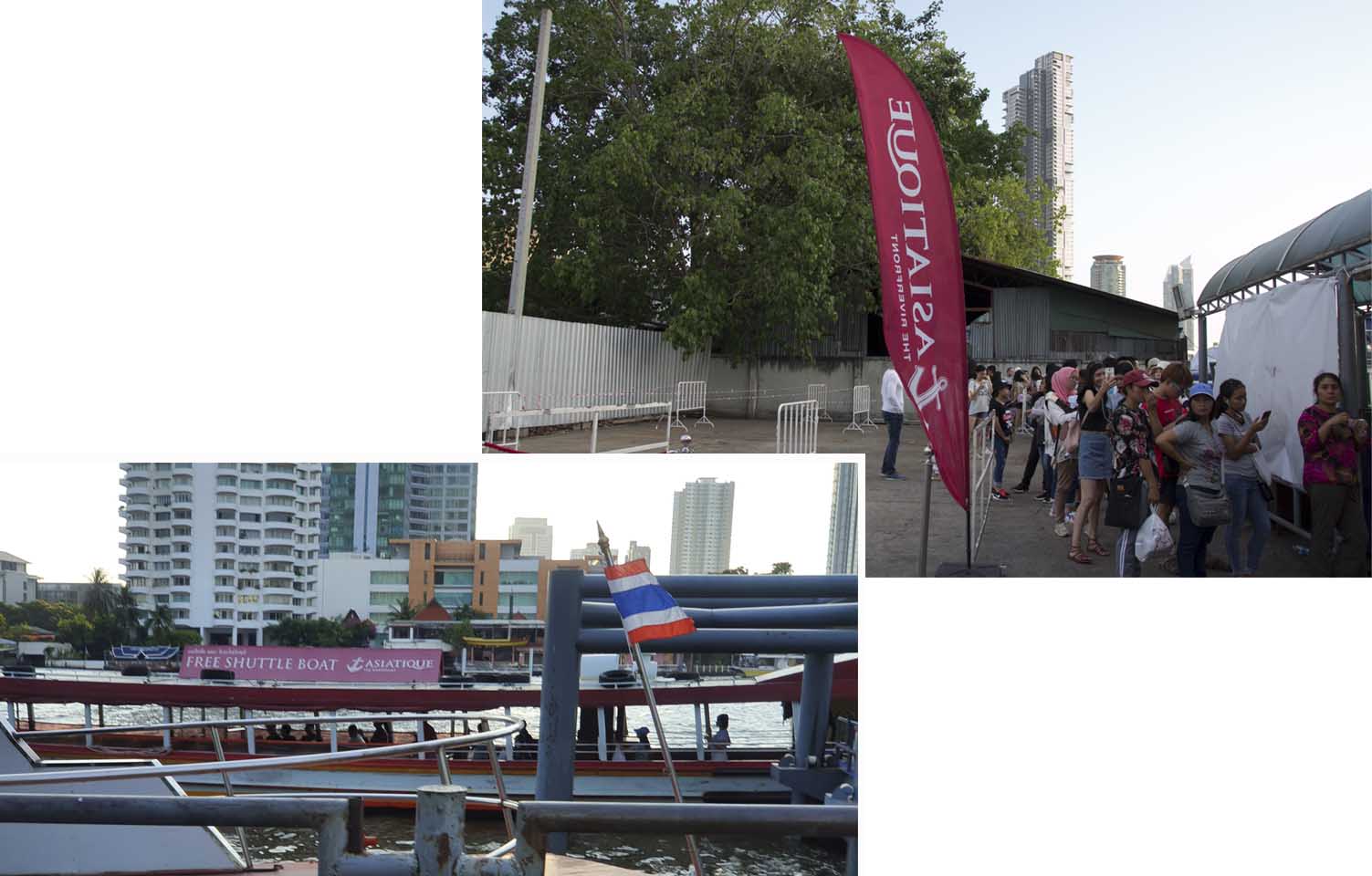 It was a 15 minutes of very pleasant boat ride from Sathorn Pier to Asiatique Pier. The sun was setting so the weather was cooler and the Chao Phraya River breeze felt very refreshing. 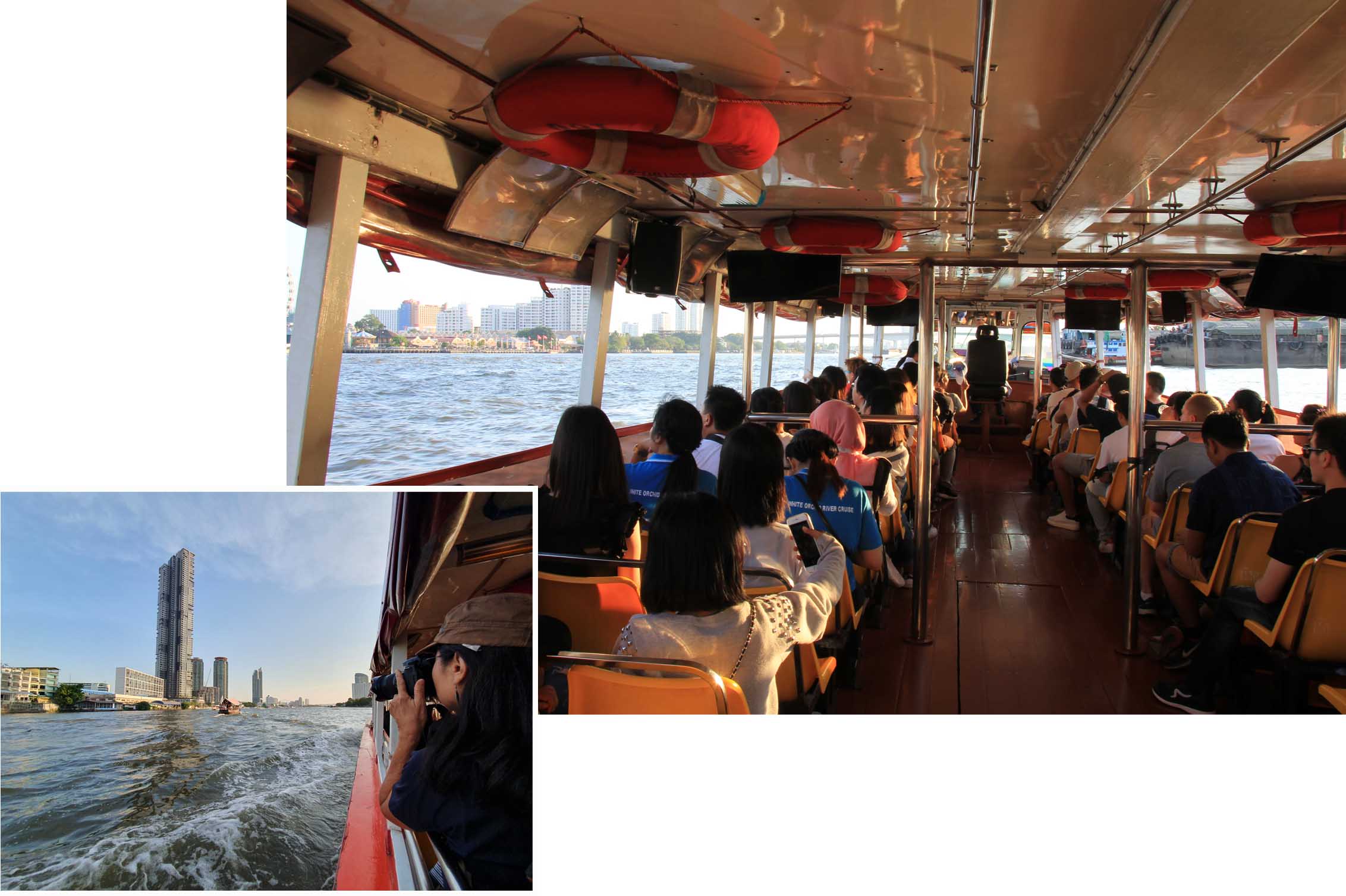 On the bank of the river were highrises. One taller than the other and the rays of the setting sun gave them a golden hue. River Chao Phraya was a very broad river and the river scene was stunning. I would definitely say that a boat ride on the Chao Phraya river was certainly a must for visitors to Bangkok. 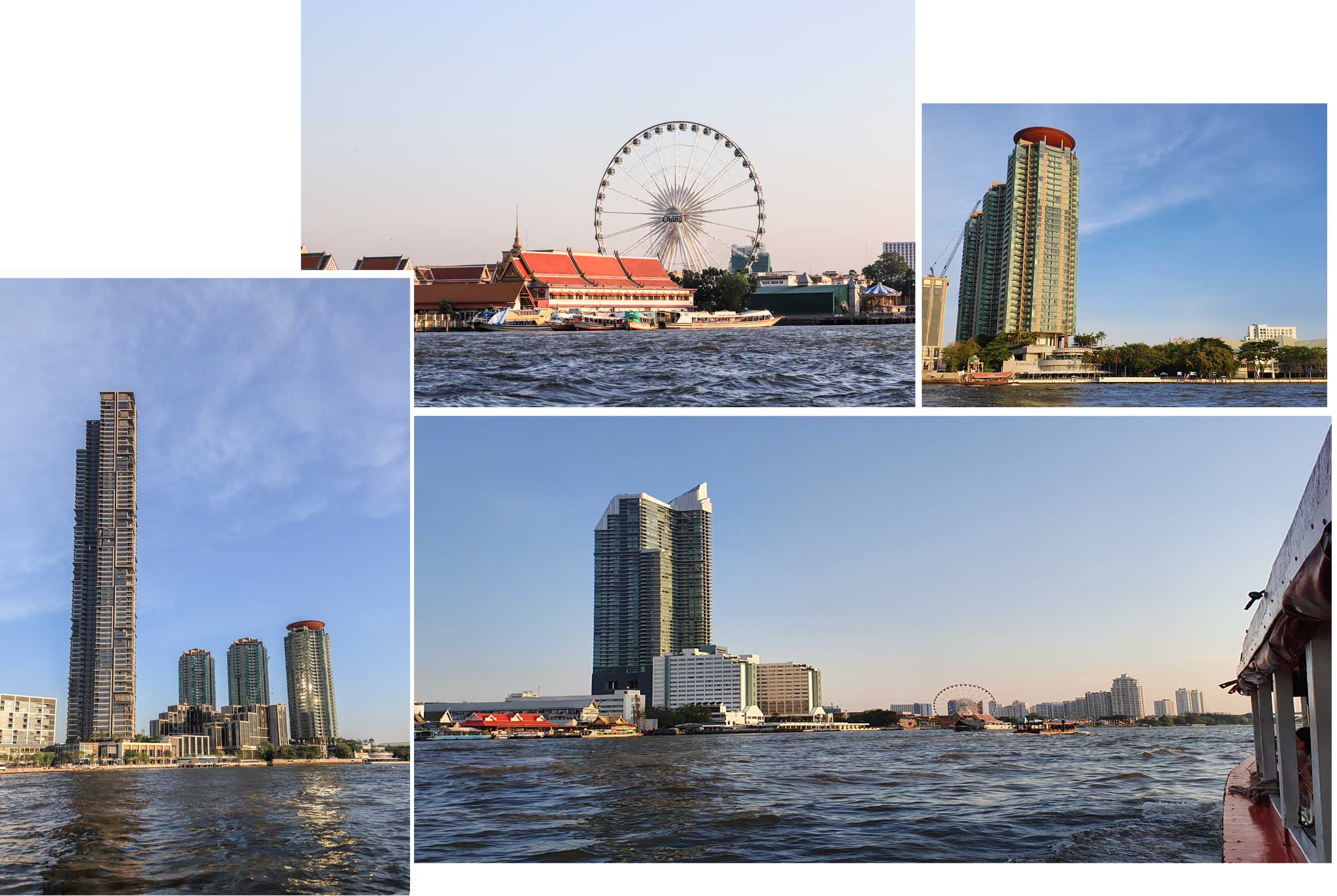 At Asiatique Pier we alighted and just beside the jetty we saw a banner “Chao Praya Princess Cruise” where we picked up our boarding tickets for the dinner cruise.

We had bought our dinner tickets on the Chao Praya Princess Cruise from Klook before we left Singapore and the three tickets added up to $117 sgd which was about 50% of the price of the tickets bought from Chao Praya Princess Cruise website. It was so much cheaper. The cruise boat had two decks though we would like to be on the upper deck there was no way of selecting the deck during the online purchase. 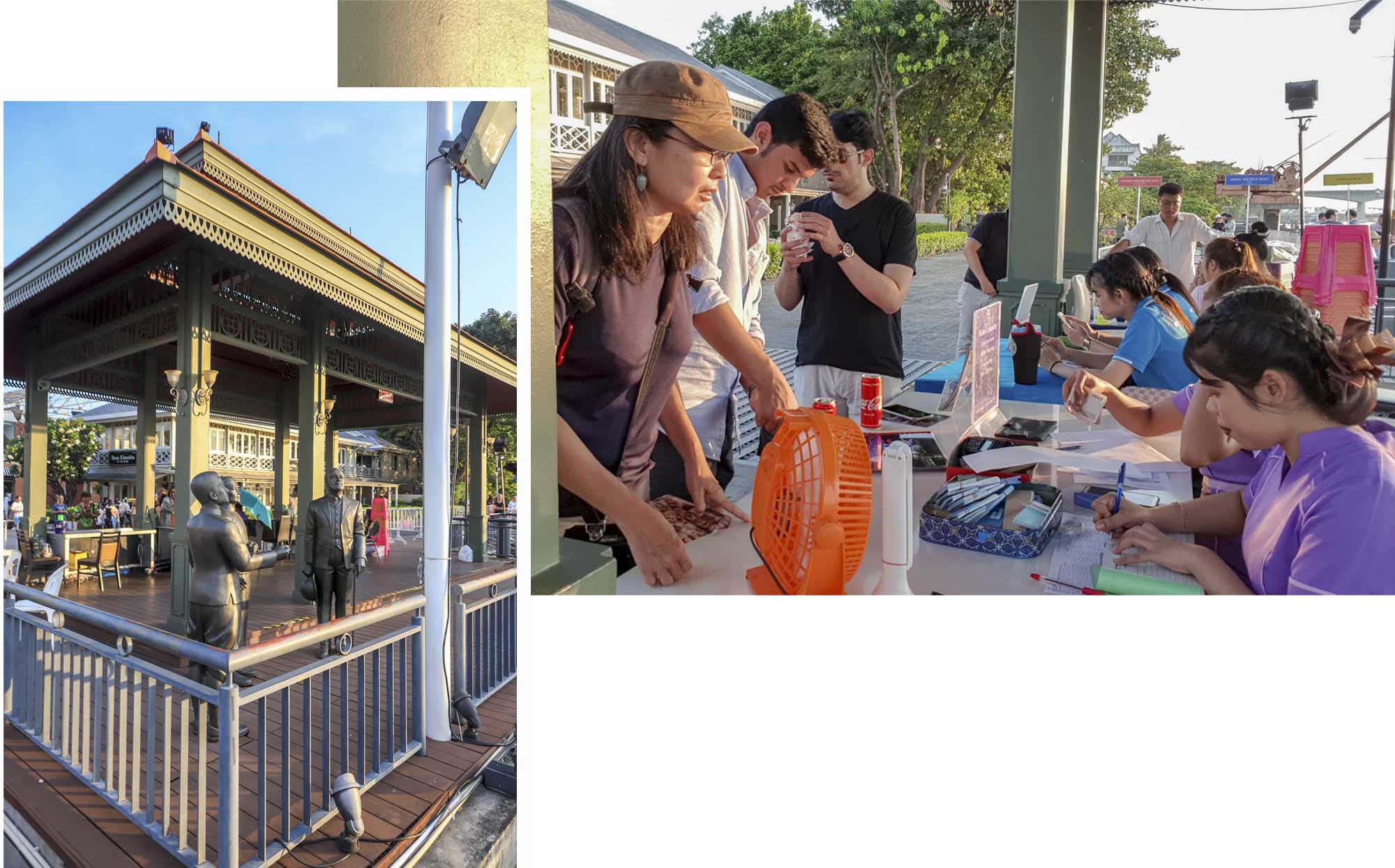 When we picked up the tickets we we told that our assigned table would be on the lower deck which was enclosed, aircon-ed and beside a window. We requested for a change to the upper deck which was an open deck and was told that the only available tables were those in the center with limited view. So we decided to stay on the lower deck. It seemed that the discounted tickets came with a catch!

The cruise would start at 7.15 pm which left us one hour to explore Asiatique Pier. Luckily there were many things to see. There was a huge theme park name Asiatique. We saw a horror house, a huge ferry wheel and many stores, shops and eateries. The entire place was pretty vibrant and was packed with tourists and locals. 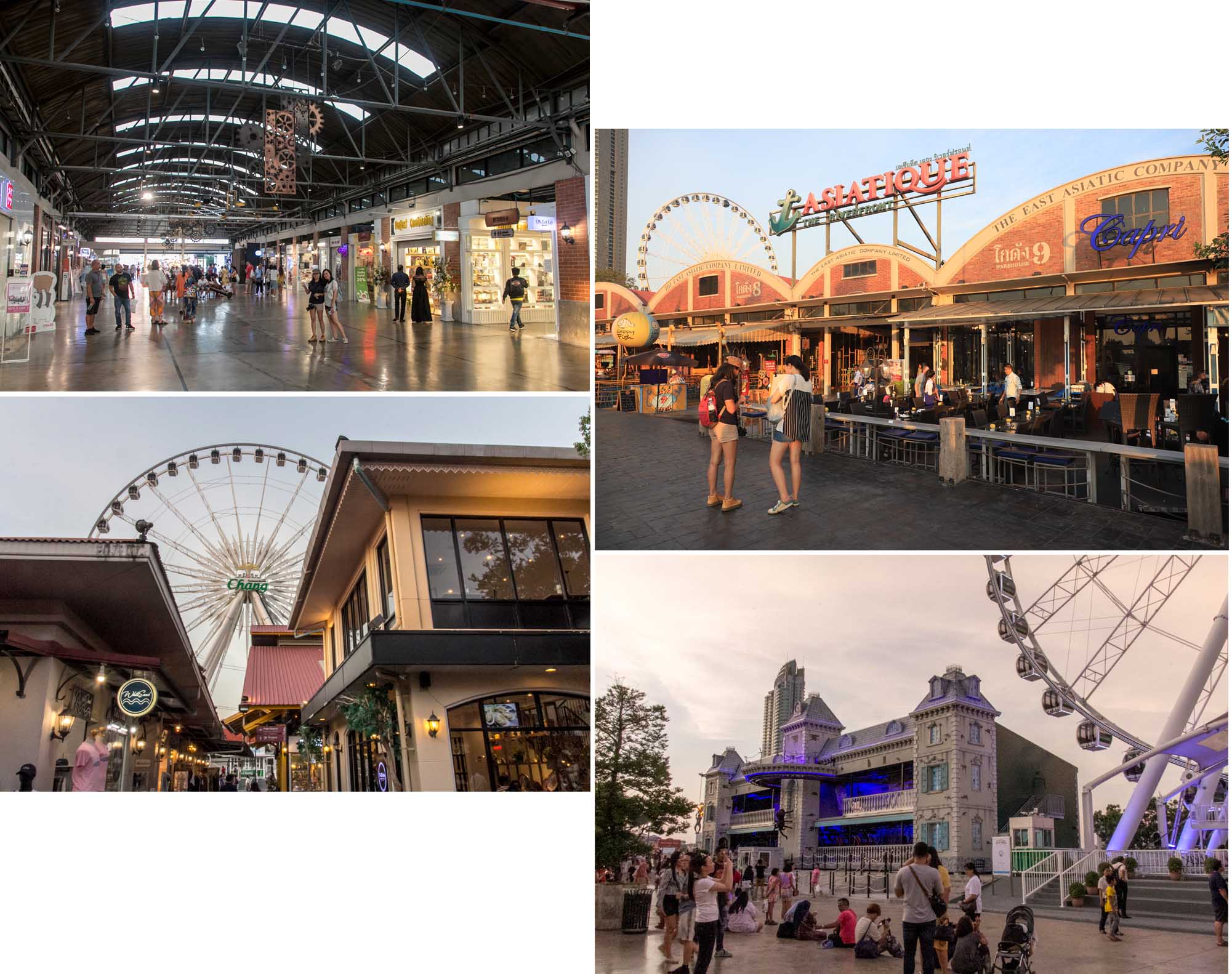 At about 6.40 pm the sun began its descend over the horizon. The sunset view was spectacular. The choppy water of Chao Phraya river reflected the golden rays and the colours turned into an amazing mixtures of gold, purple and pink shades before darkness fell. 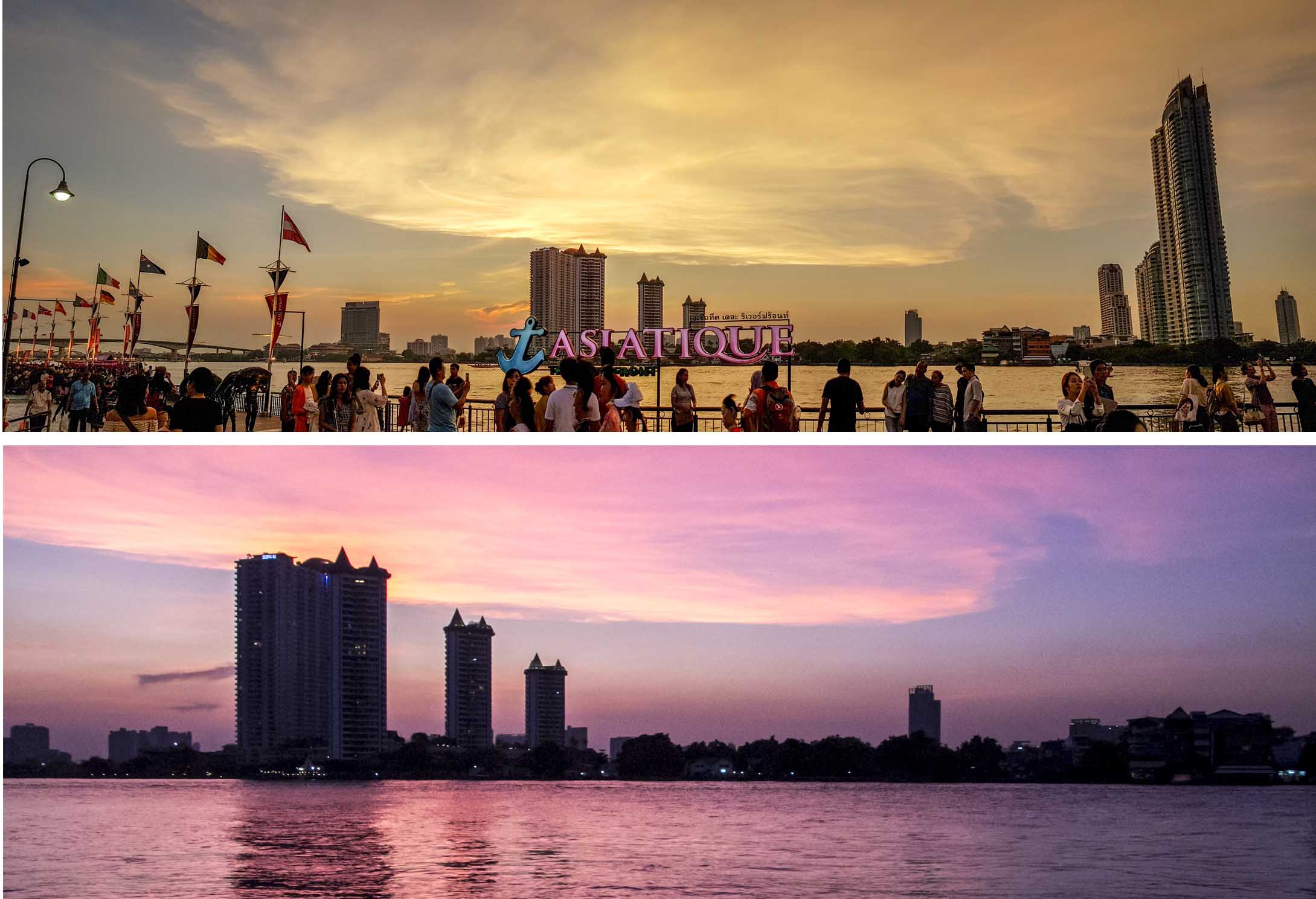 Sunset as seen from Asiatique Pier

We were back at the pier at about 7pm to wait for the cruise boat to arrive. Already we could see many other similiar cruisel ines moving about on the river. Finally we saw our boat, “Chao Phraya Princess Cruise II” and when it docked it blasted out a “welcoming” music. All its staff was standing by the dockside of the boat in a salute, “Welcoming it customers”. Impressive. 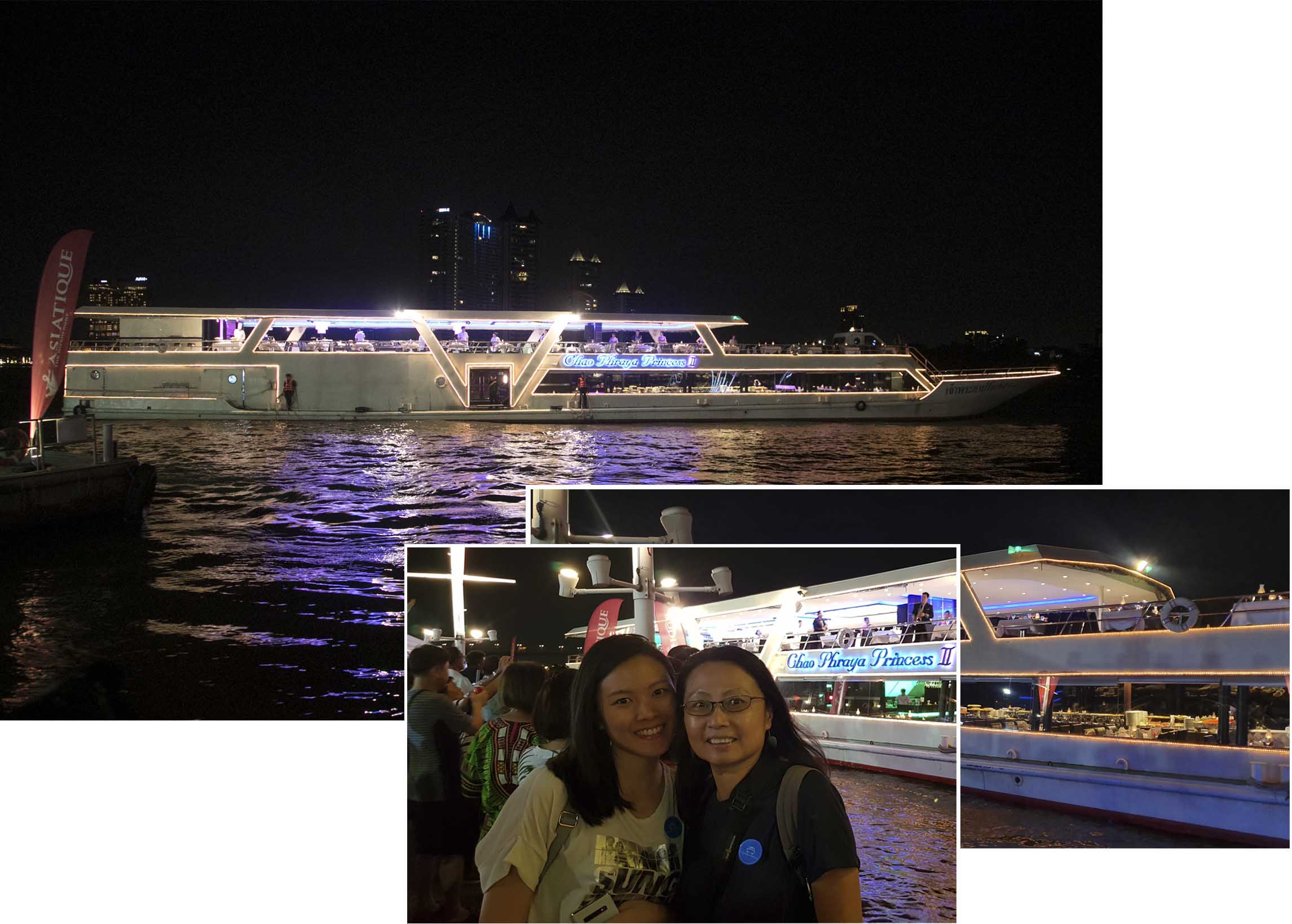 Getting read to board Chao Phraya Princess Cruise II

The cruise sailed out on time and dinner time started on board. The dinner buffet spread (International meals) on the boat was  pretty good. There was Japanese sushi, all types of meat (chicken, beef, pork, fish), soups, different types of Thai curry, seafood, fruits, assortment of deserts, coffee and tea.

In the front part of the room was a singer belting out out-of-tune songs. She was definitely more noisy than entertaining. 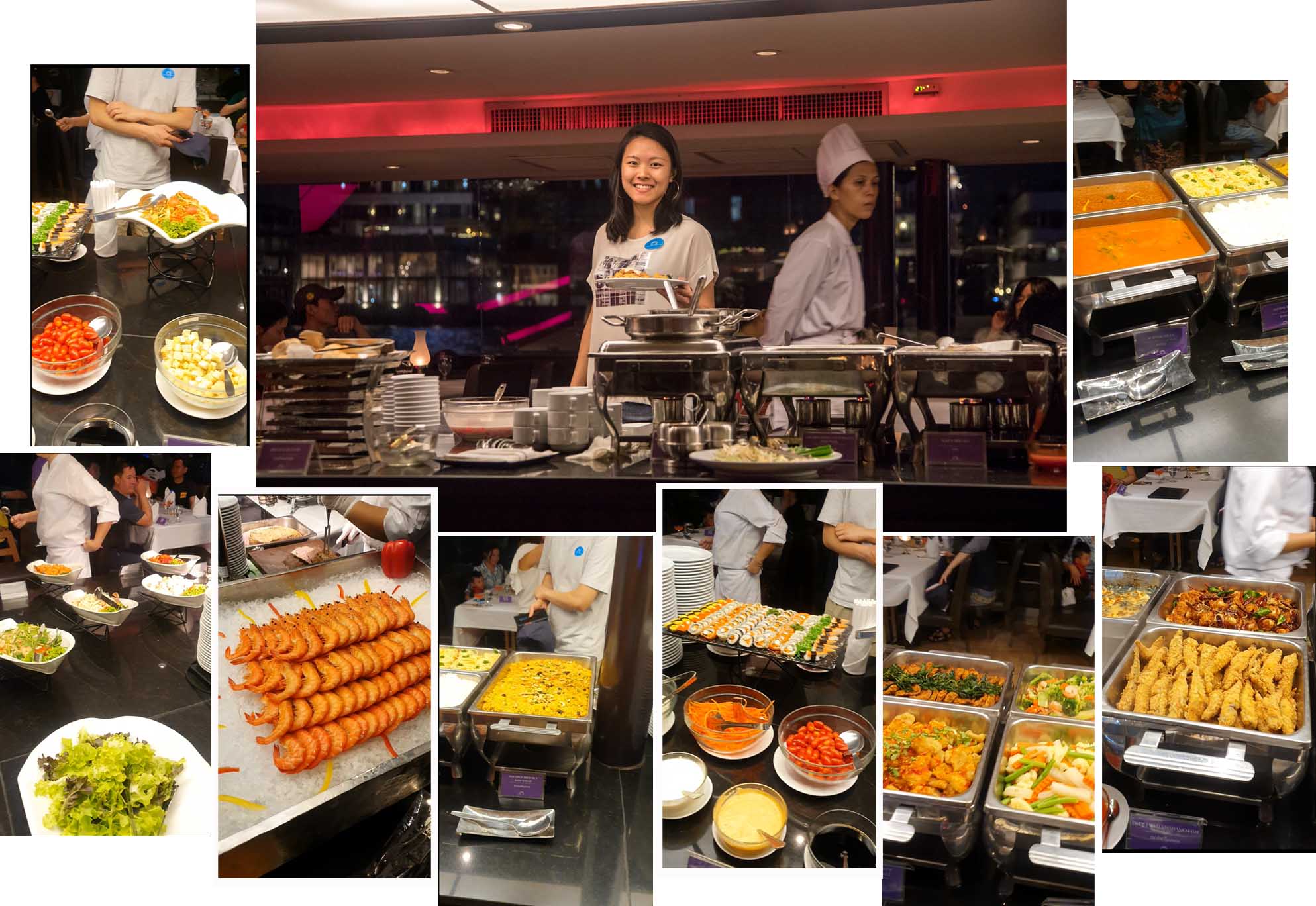 International buffet dinner on the cruise

As we dine, we also got a continuous stream of fabulous night view of the buildings by the sides of the river. The highlights were the golden palaces and temples. The entire dinner cruise lasted whole two hours as the boat made its way up stream and then down stream. On the return trip we went out to bow of the boat which was an open deck to have a better view of the golden buildings. 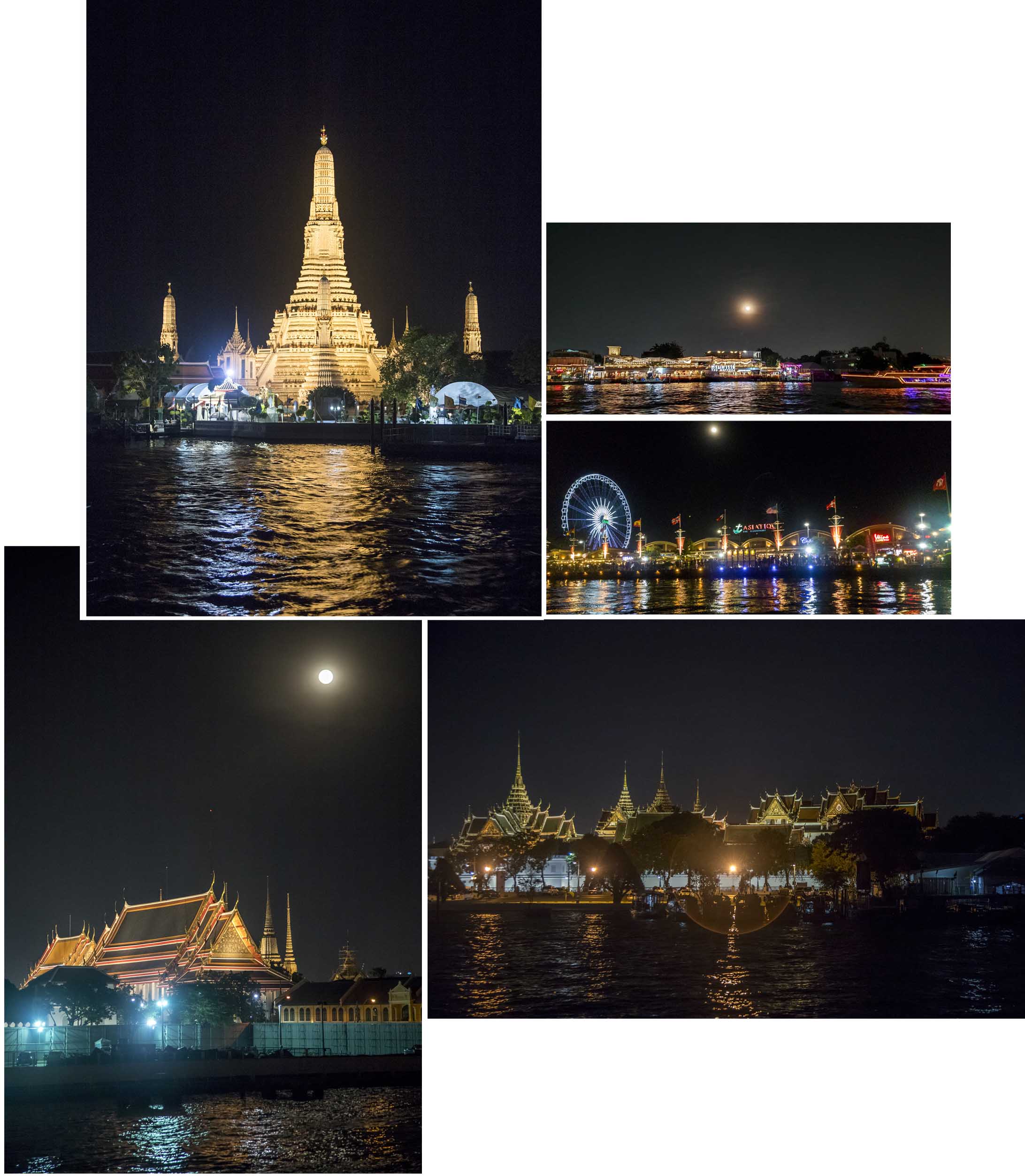 Cruising Chao Phraya in the evening

The cruise boat brought us back to Asiatique Pier after two hours and from there we back-tracked to our hotel, by first taking the free boat shuttle boat service to Sathron Pier than by BTS back to Asok Skystrain Station then a short walk to our stay.