We should arrive in Ayutthaya by the early afternoon. Having experienced the hot weather of Thailand we would not visit Ayutthaya Historical Park immediately upon arrival. We planned to go to our hotel to cool down and venture out to the ruins when the weather got cooler.

Ayutthaya was the second capital of the Kingdom of Siam and was an international trading port from the 14th to the 18th century. It was burnt down by the Burmese in 1767 and was never rebuilt. The ancient city is now known as the Ayutthaya Historical Park and is a UNESCO Heritage site. The site contained ruins of palaces, temples, monasteries and statues.

Our drive took about 2.5 hours and by the time we reached Ayutthaya town it was close to noon time. The temperature was too high (probably about 35°C to 36°C) and the sunlight was “biting” hot on the skin. It was unimaginable to be out exploring the ruins in such weather condition so we drove directly to our “stay” for the night and waited for the sun to set. At 3.30 pm we left our hotel to visit the ruins. Though the weather was still hot we had to begin our visit pr soon it would be closing time.

This was a Buddhist temple built in 1357. The opening time for this ruin was from 8 am to 5 pm and the entrance fee was 20 baht for a non-Thai visitor. We reached the temple at about  3.45 pm, we could not locate a ticketing booth neither was any staff man-ning the entrance so we walked right in. The most prominent structure was a chedi (stupa) that rose magnificently into the sky. 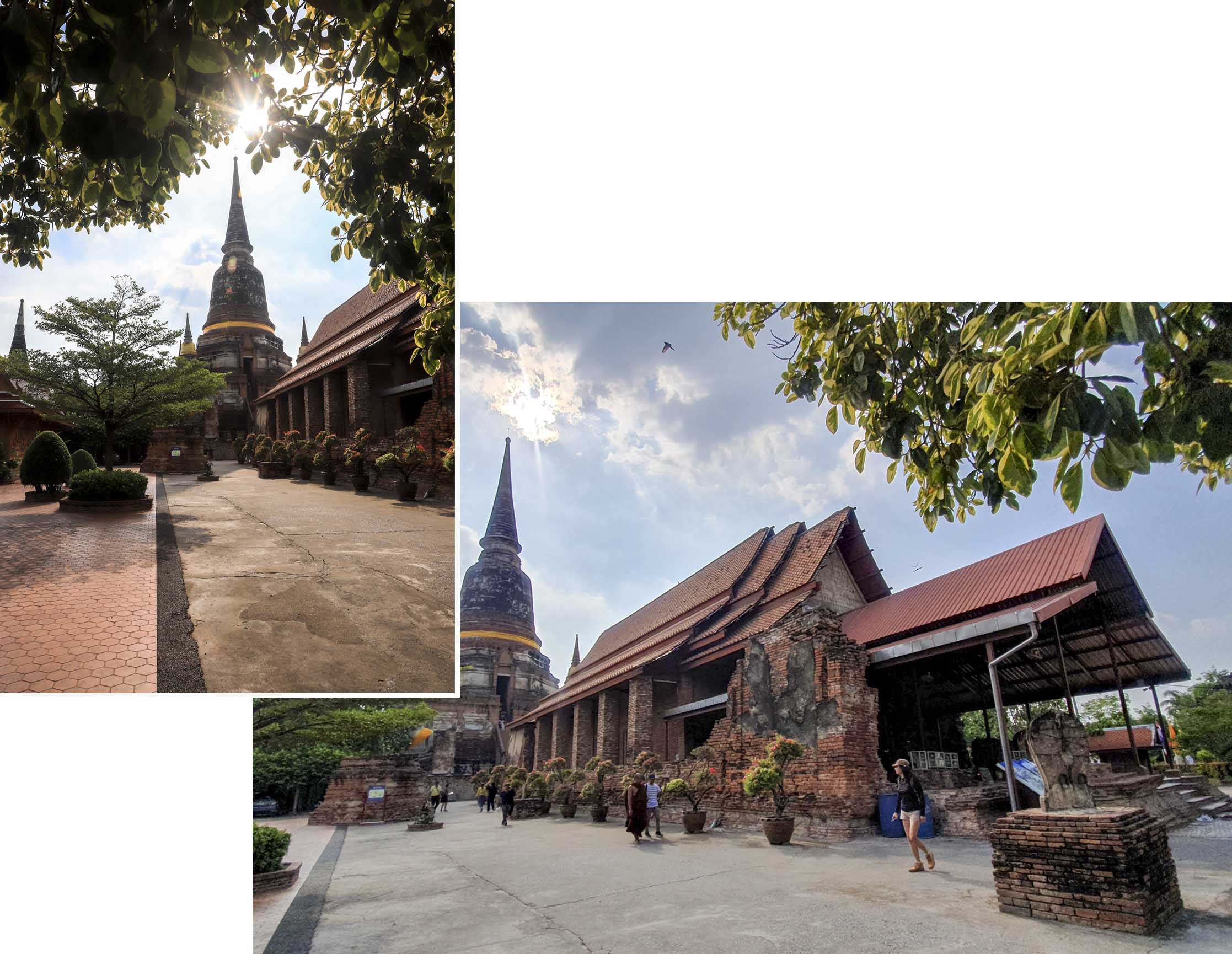 The Chedi was very large and tall about 60 m high. It looked like an inverted bell and its tip was touching the setting sun. There was a long flight of steps leading up into the stupa and many people were taking a trip up. At the top of the stair was just an empty dark room/hall and a cavity on the floor. Some visitors were throwing money into the cavity so maybe it was a wishing well. 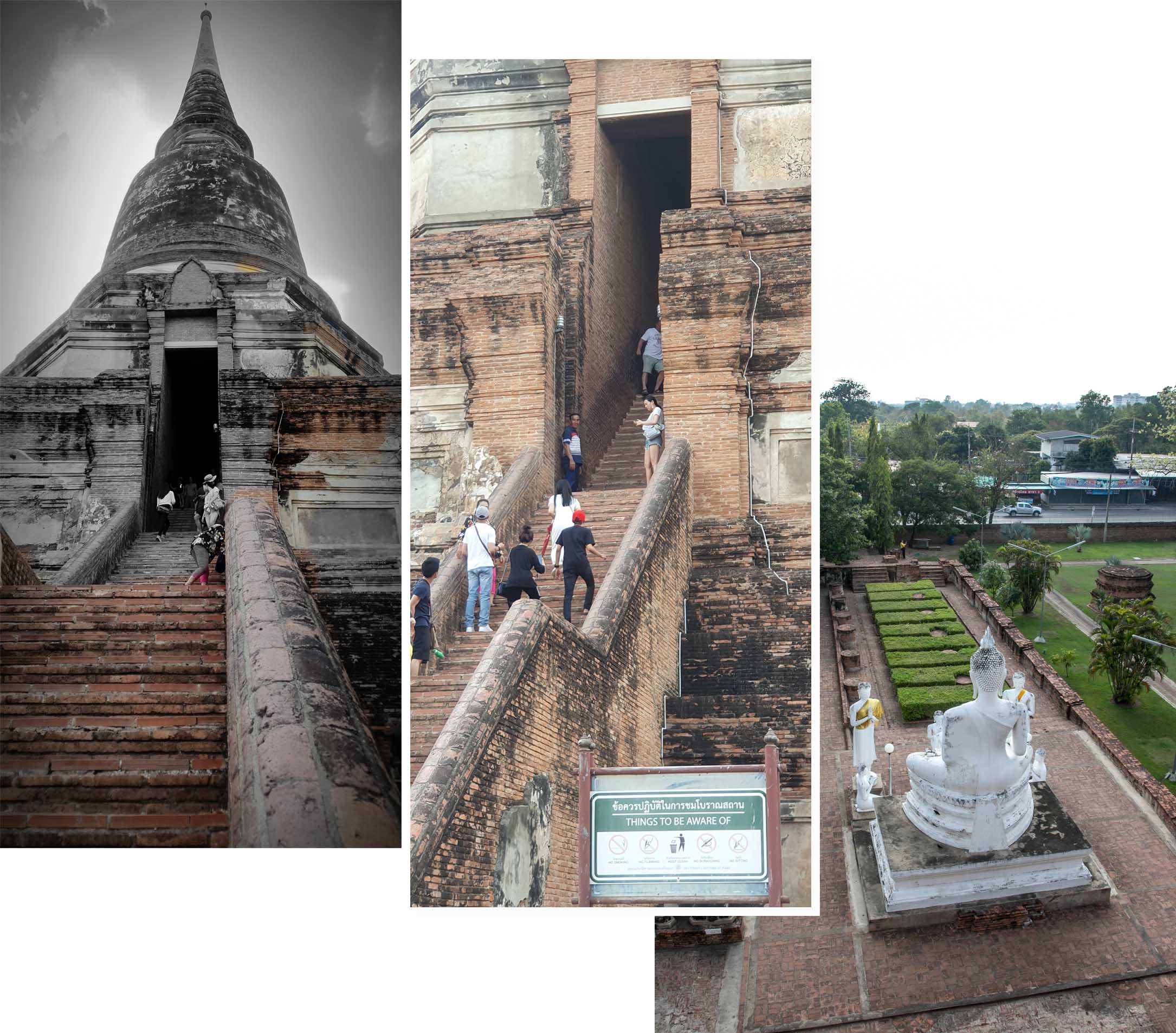 In the compound Wat Yai Chai Mongkhon, there was a huge lying Buddha drapped in yellow cloth. I did not read about a lying Buddha in this temple, so we did not look out for it. Just when we were about to drive off we caught sight of it.  We stopped our car and went up close to have a look.

Route to our 2nd ruin

Wat Phuttha Sawan was only two to three kilometer west of Wat Phanan Choeng Worawihan separated by a river. But there was no road going directly west to the the ruin so it was a 14 km loop journey to the ruin.

Wat Phutthai Sawan was built in 1353 AD (715 CS) by King Ramathibodi I. The temple was built after the King’s elder brother (the ruler of Suphan) defeated the Khmers and brought them back under the control of Ayutthaya in 1352.

Wat Phutthai Sawan was not my expected ruin, some of its structures looked old and ancient and yet others looked newly built or maybe newly restored. In the center was a tall Prang Tower which looked brand new and white. Surrounding the Prang was a square cloister with rows of golden Buddha statues. 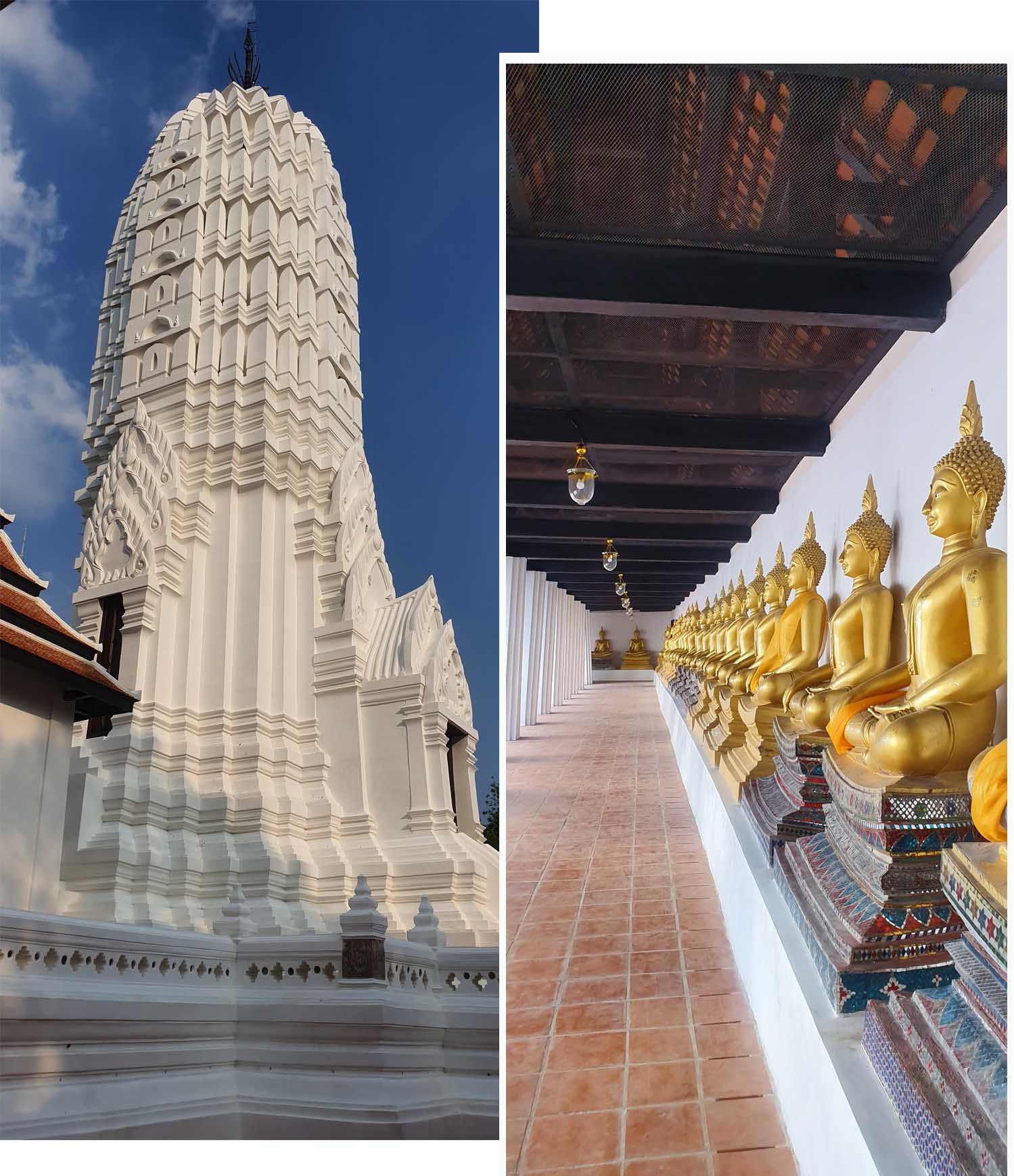 The church was less than a kilometer from Wat Phutthai Sawan. It was built in 1666 during the reign of King Narai after the first generation of missionaries from Paris came to Ayutthaya. During the Burmese-Siamese War it was burnt down. After the war the church was deserted. In 1831 it was restored/renovated and more was done in the recent years.

Saint Joseph Church was a huge yellow building. Surprising it was rather beautiful and in certain angles it more like a beautiful castle. We were at the castle when the sun was setting and rays turned the church a bright yellow. 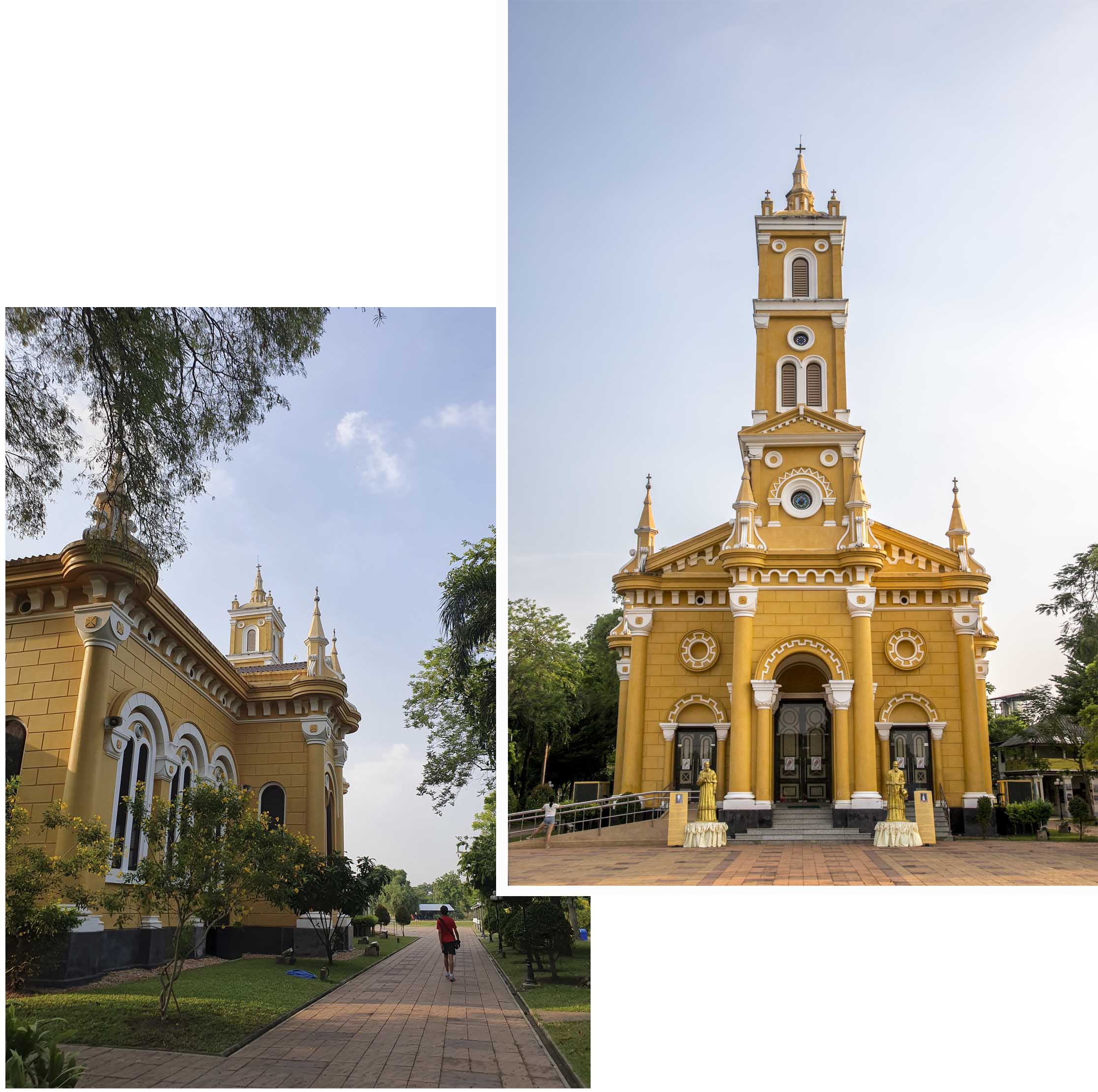 The whole time when we explored the ground of Saint Joseph Church we did not see any other visitors. It was nice to have the entire place to ourselves. Though the church ground was open the interior of the church was close so we did not have the opportunity to go in. 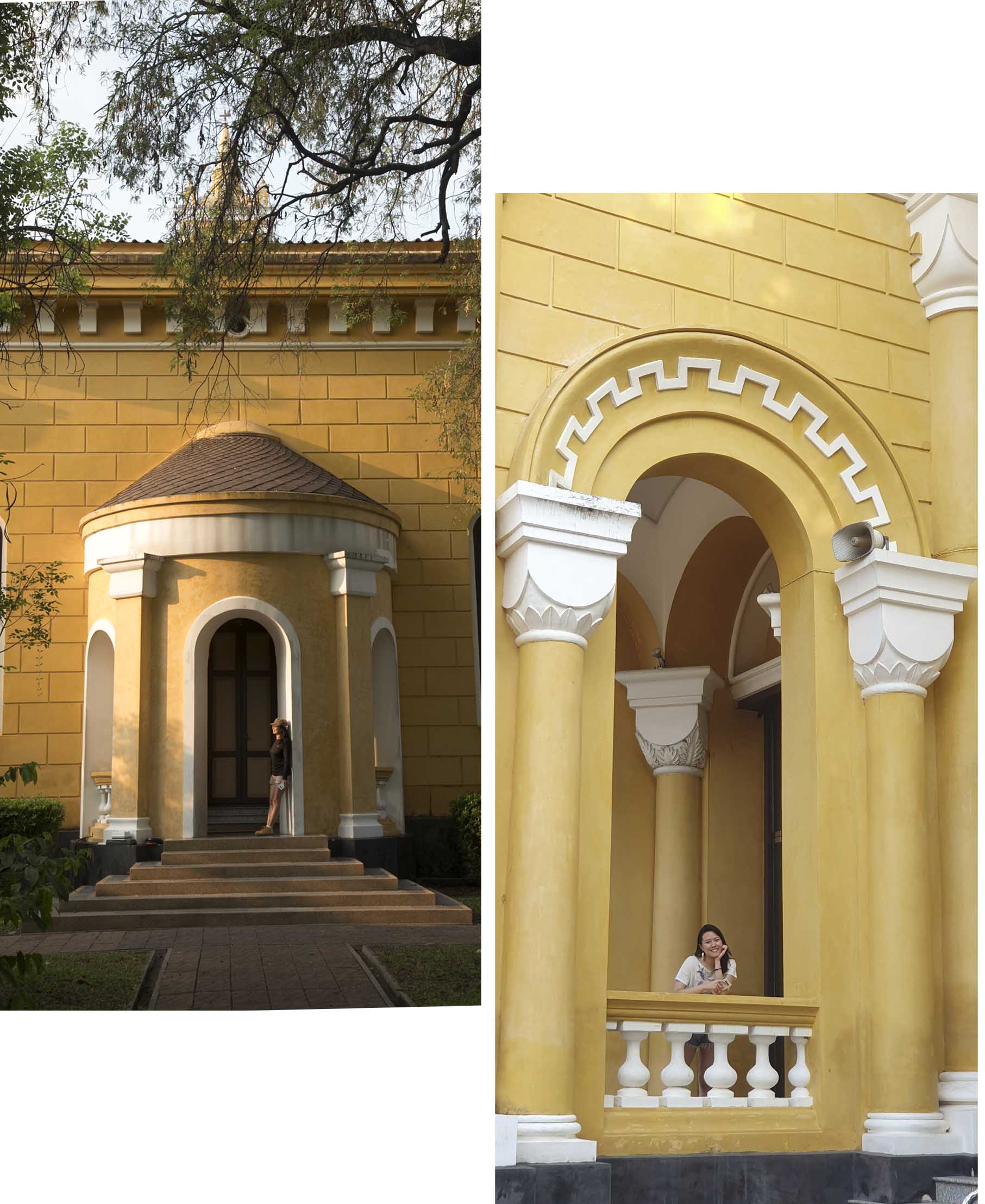 From St Joseph Church it was a 2.5 km drive to Wat Chai Watthanaram. The drive was quite easy and it took not more 10 minutes to arrive at a carpark just outside the temple. It was close to the end of its opening time (8am to 6.30pm) so we decided not to purchase the entrance ticket (50 baht per person) and had to leave as soon as we got in.

We could see the ruin from outside the boundary. In many ways the temple looked similar to Angkor Wat but of a much smaller scale. At the center of the temple was its largest Prang rising up to 35 metres into the air.  The colours of the ruin structures were sort of whitish, yellowish, brownish and redish interlaced together. It was very unlike the pure white color of the restored Prang at Wat Phutthai Sawan which we saw an hour ago. This made us wondered if the original color of the structure was really white and what we seen today were the discoloration due to the passage of time. 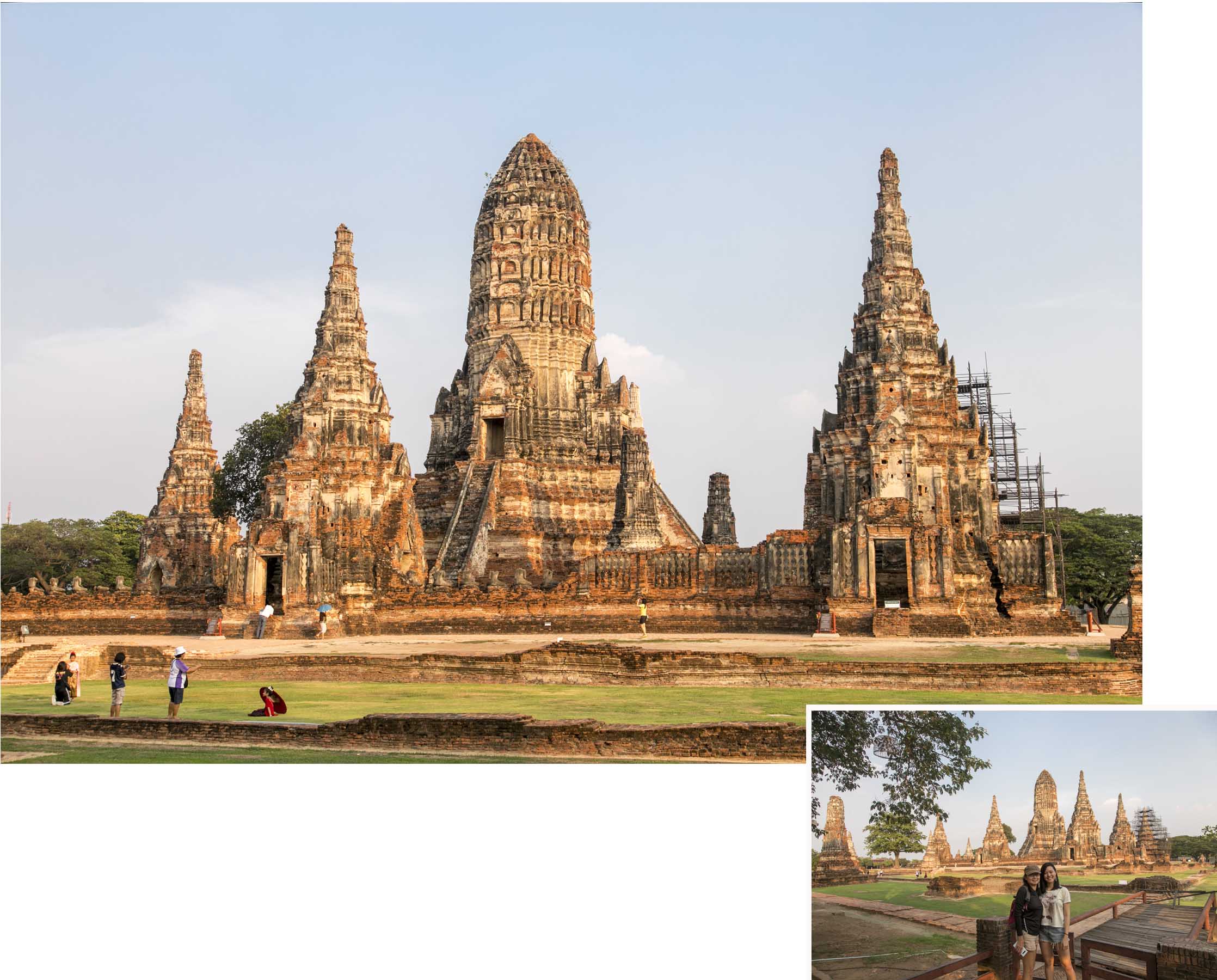 Wat Chai Watthanarame was constructed in 1630 by the king Prasat Thong as the first temple of his reign, as a memorial of his mother’s residence in that area. The temple’s name literally means the Temple of long reign and glorious era. It was designed in Khom style, which was popular in that time.

After Wat Chai Watthanarame we turned into the island of Ayutthaya. It was already about 7.20 pm and of the ruins on the island were already closed. They still could be seen as we drove pass. By that time we were already ruins “tired” and did not mind not visiting. Anyway they began to look alike. 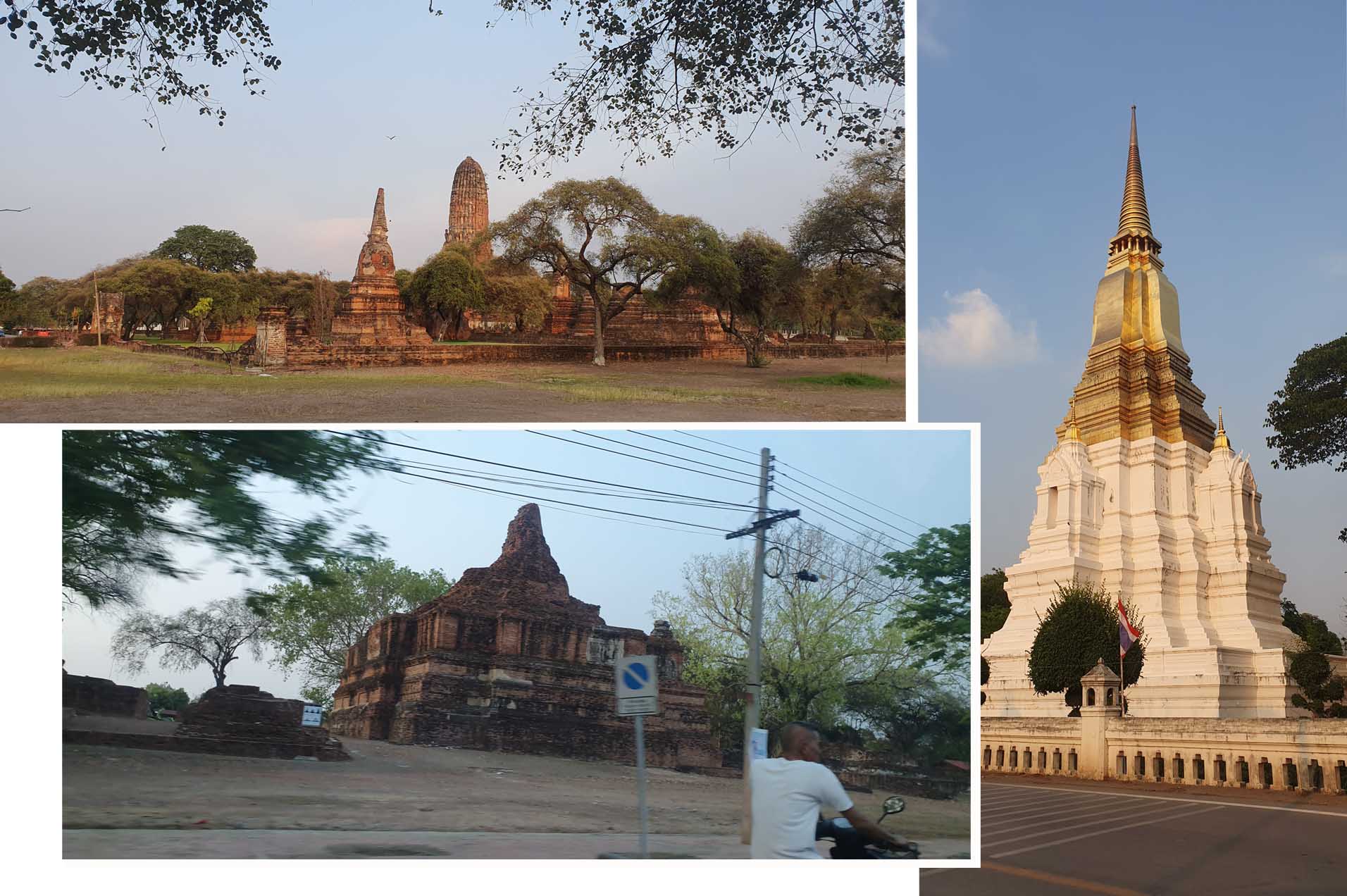 We went in search of a Night Market for dinner and on google map we found “Klong Thom Market Night Plaza Grande” not far from Ayutthaya Historical Park. Unfortunately, it was not open on weekday. The next nearest market was The Grand Market of Ayutthaya which according to google was opened 24 hours every day. We parked our car on the main road and walked a short distance to the Grand Market. We were looking for food stalls in the Grand Market but did not find any, so we left feeling hungry and disappointed

Route to Grand Market of Ayutthaya

On the main road after the turn-off to Grand Market we found a couple of interesting roadside food stalls. One sold durian for about 100baht per box (four fleshy seeds) which we gobbled up in no time. Then there was this ice-blended fresh fruit drink store. We ordered three drinks:  orange, lime+pineapple and mango. The ice blended drinks were fabulous they tasted so fresh and cool. After one cup we still wanted more and went back for a second. It costed only 30 baht ($1.35 sgd) per drink! 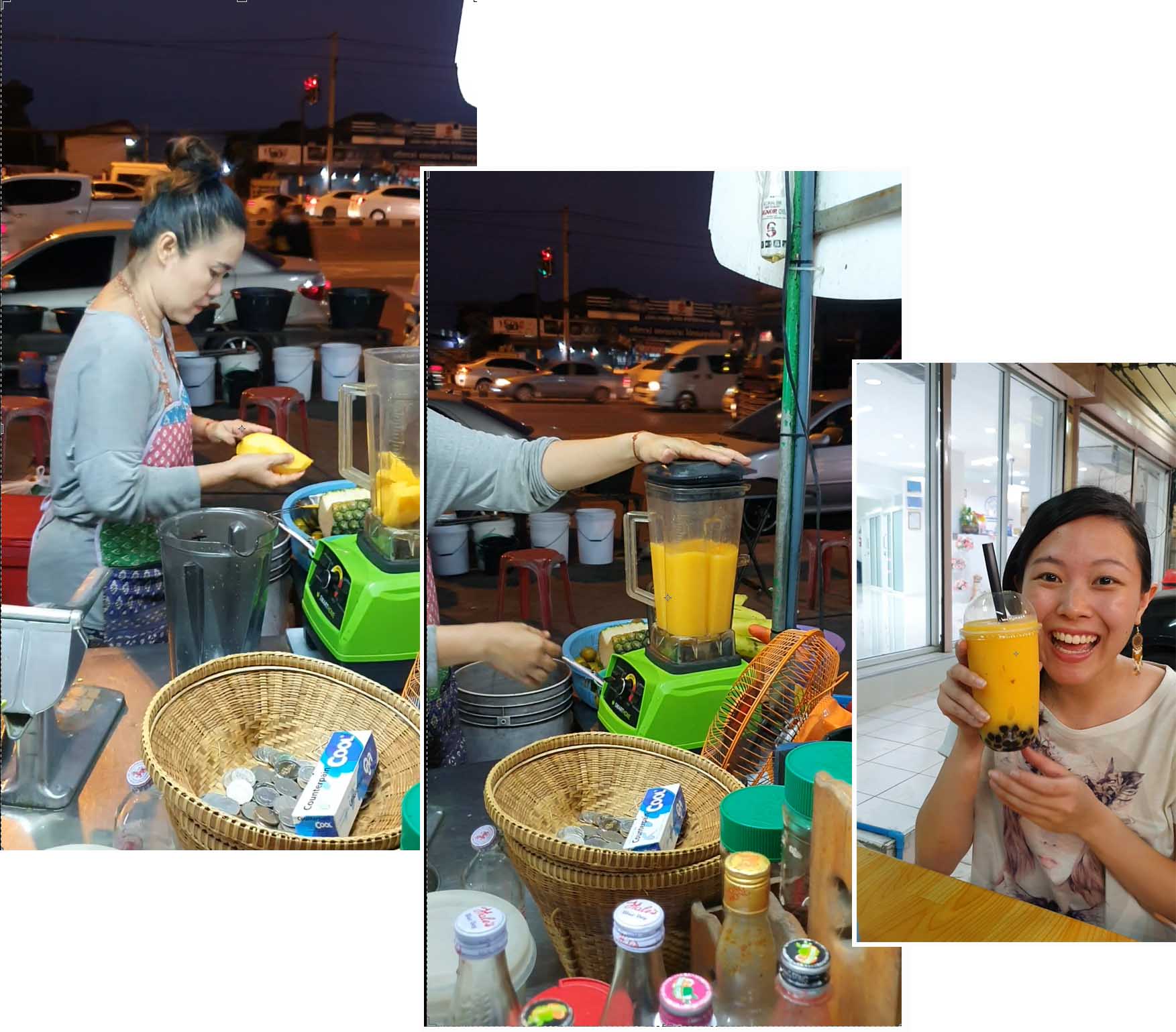 As we walked to our car, we were attracted by a huge banner of lovely food hung just outside a shop so we stopped to had our dinner there. We ordered our food by pointing to the pictures on the banners. The eatery owner took our order and went to the stove at the side/front of the shop to cook. Soon the hot food were placed in front of us. The food tasted so-so. They certainly looked better than their taste. In fact they looked best on the “banner” 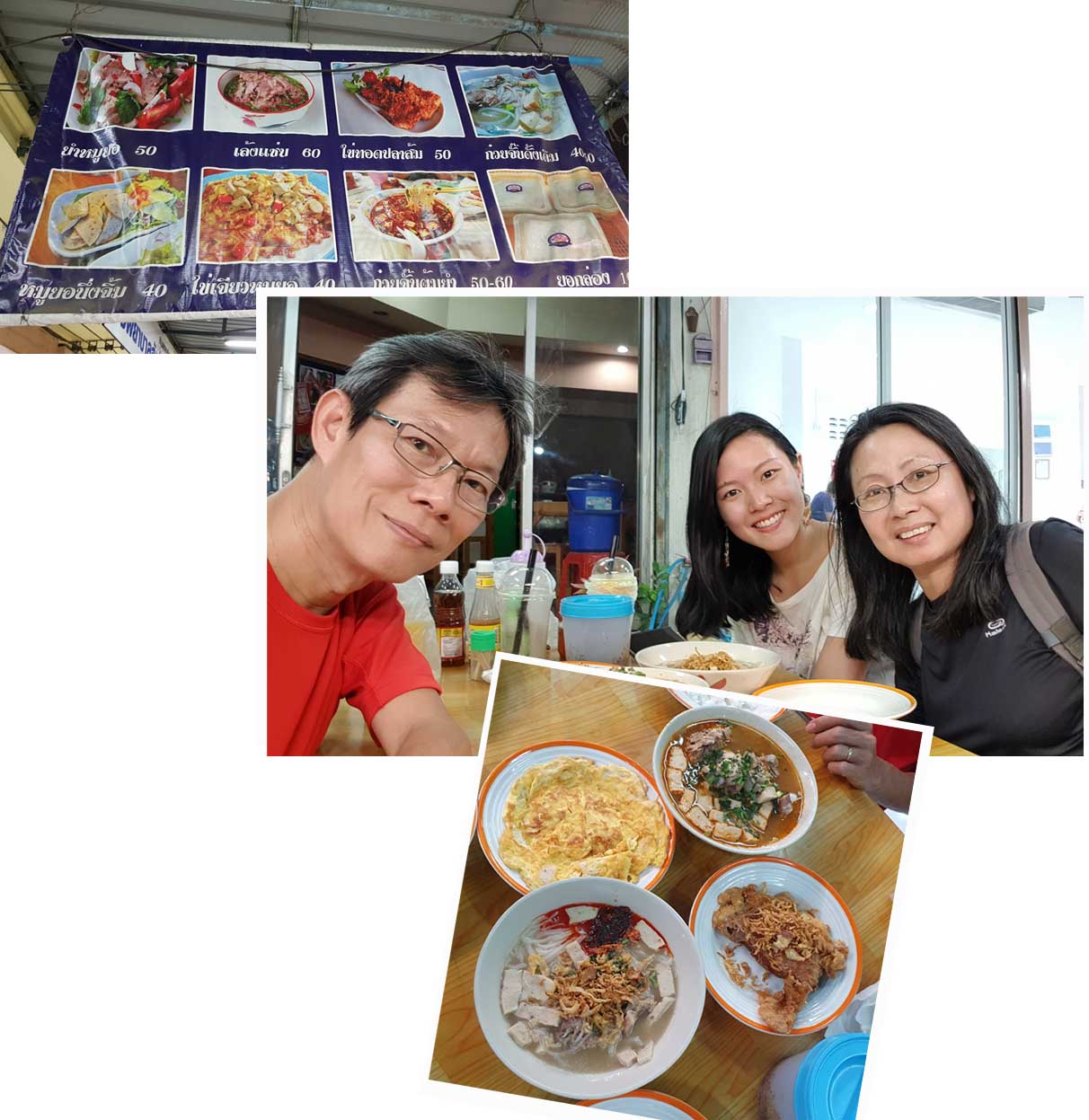 We stop at a night market just located a short distance from our stay. Unlike the fabulous and huge night market in Bangkok, this night market was much smaller and sold daily cooked/raw/fresh food/fruits to locals. We found what we were looking for — “Durian!!!!” and bought two packs. 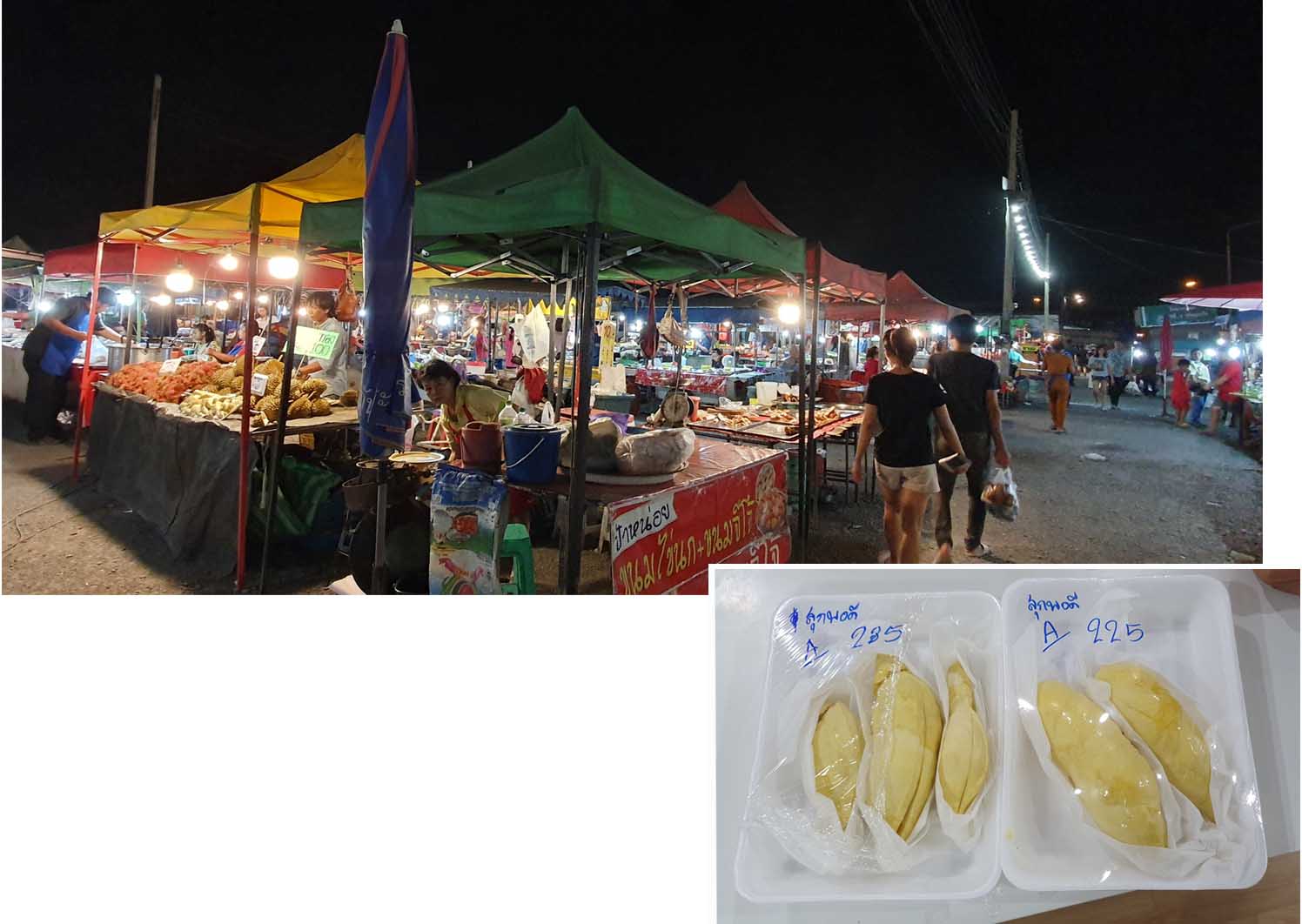 Our stay was at “Wellness Park Residence“. We did our booking on Agoda.com and it costed 1842 baht ($82.42 sgd) for a King Deluxe Room with pool view. The price was for two persons using the room including breakfast. For the third person we had to add 500 baht ($22 sgd) during our check in which covered stay and breakfast. 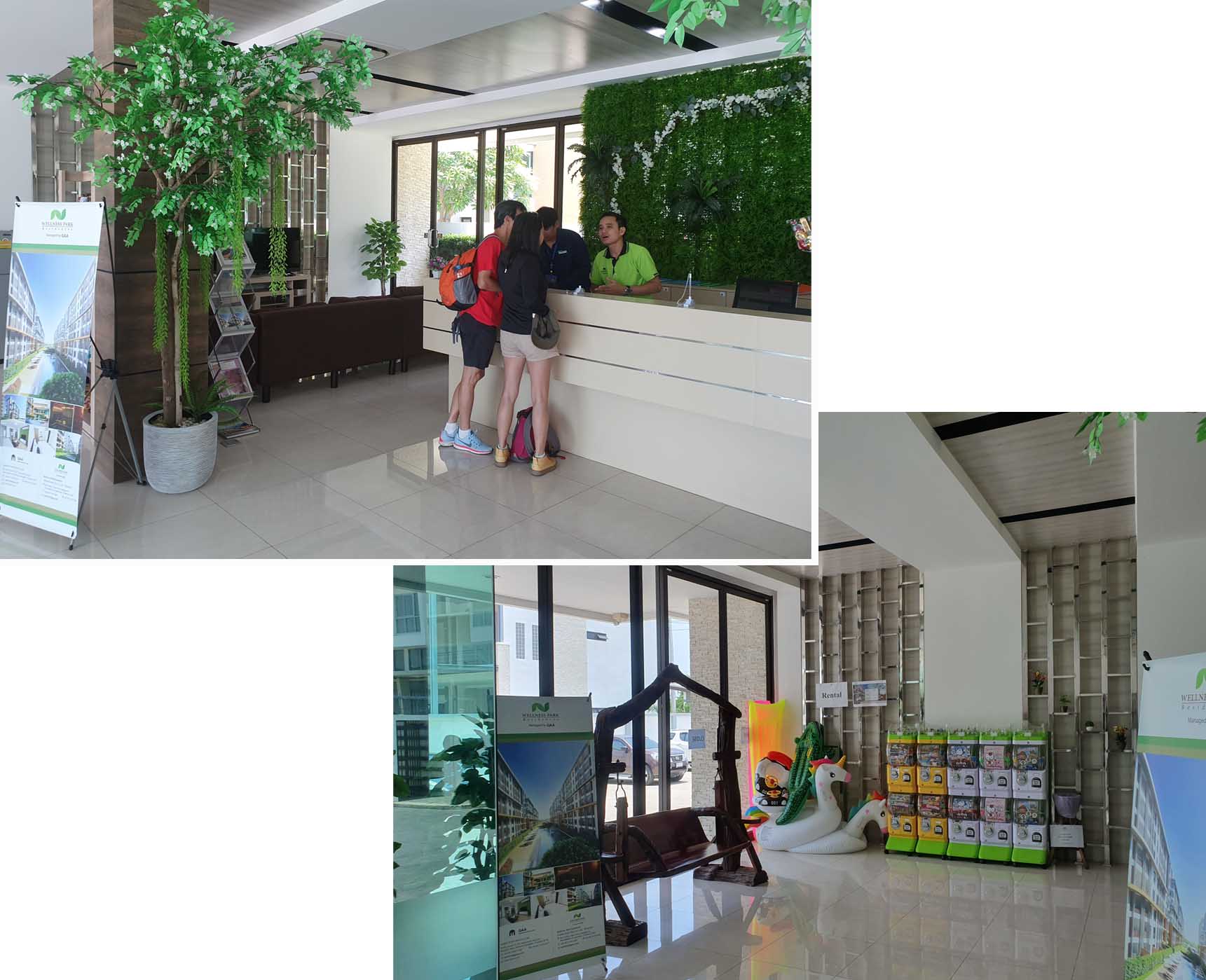 Checking in at Wellness Park Residences

The hotel looked very nice, especially with the big pool that stretched between two rows of apartment blocks. The reception and dining hall was in a lower building at the front just after the main entrance. Though the pool looked lovely but the weather was too hot for a dip. 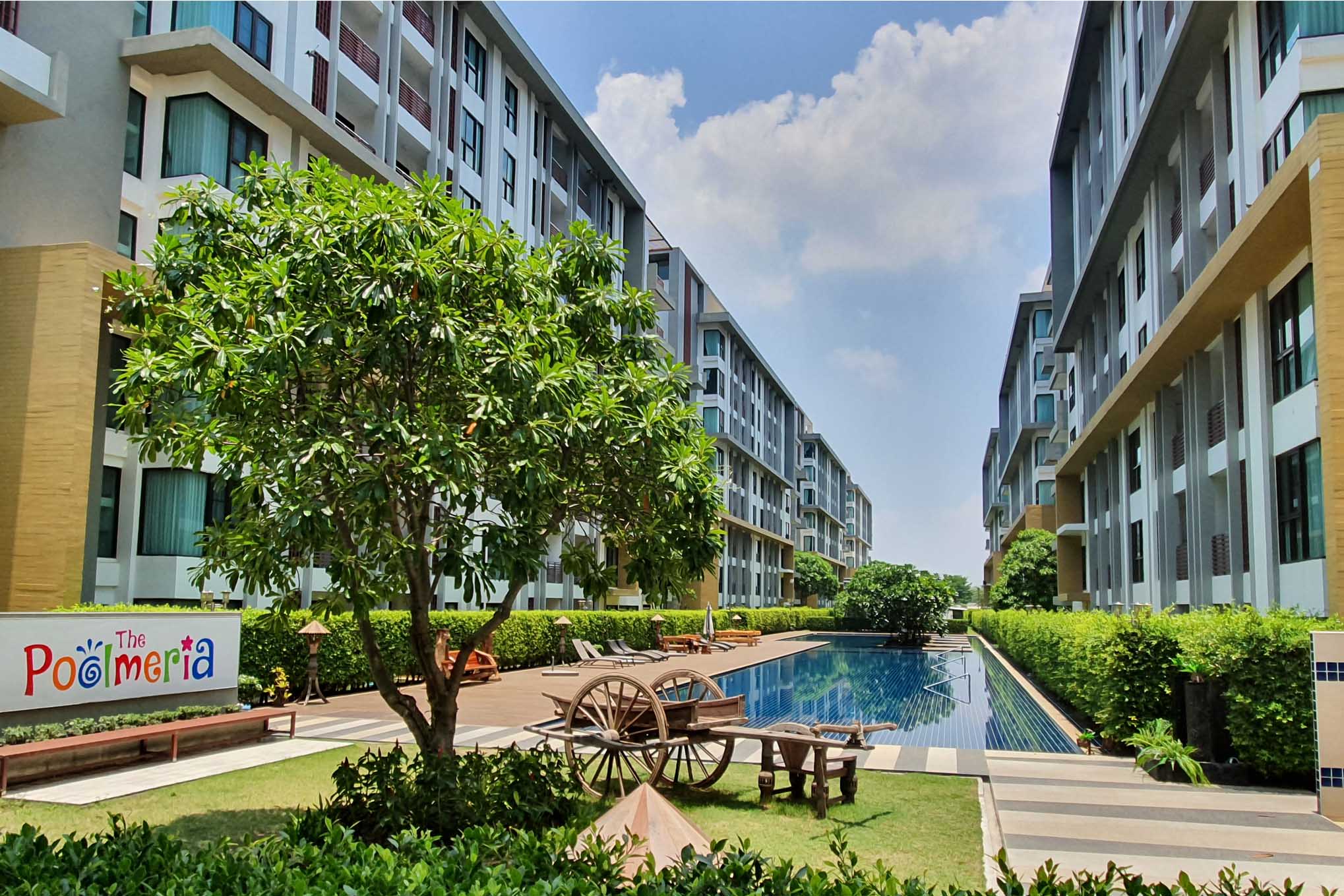 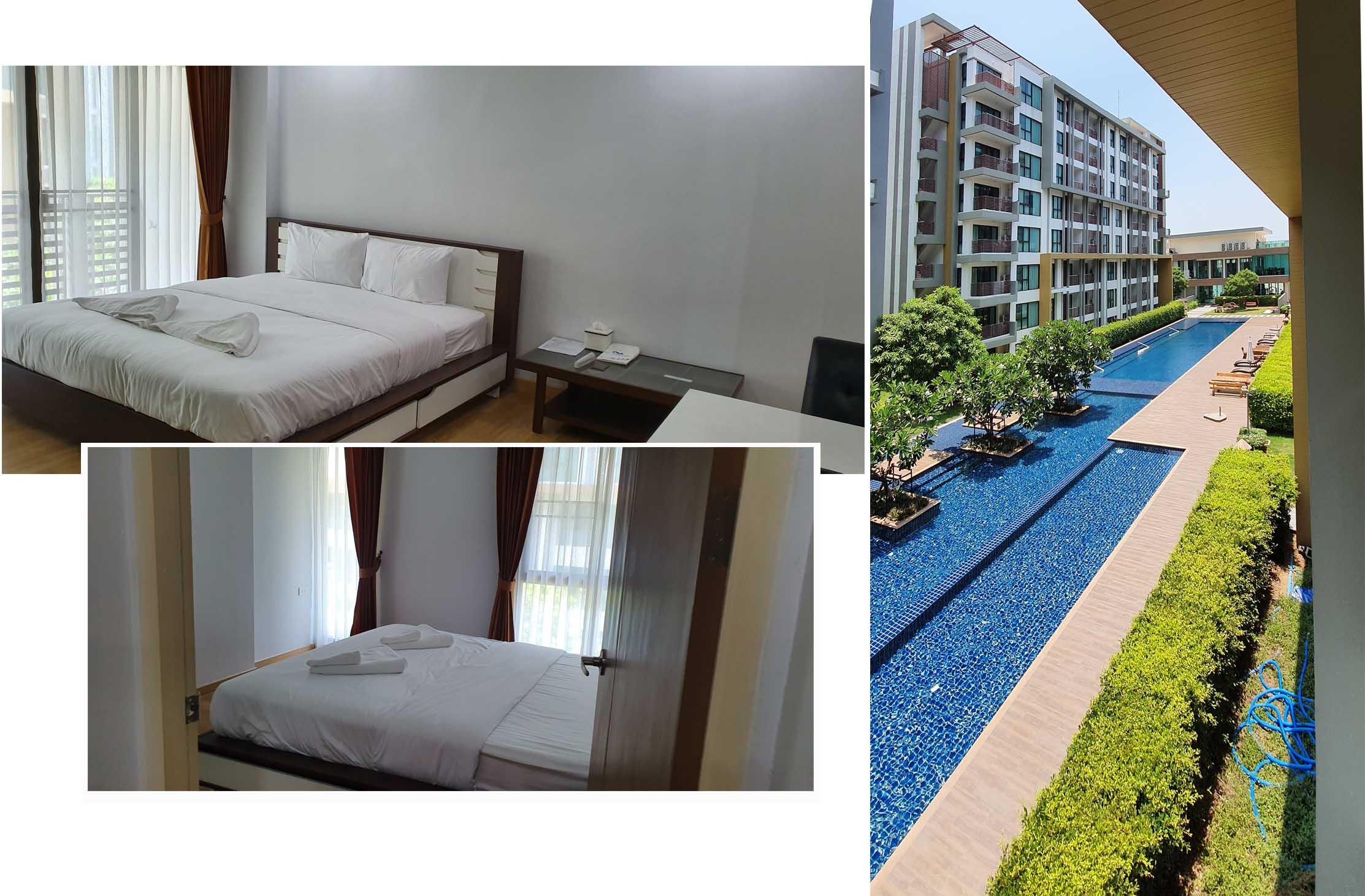 Our room with a balcony view of he pool

The kitchen was big, it had a induction stove, a microwave, electric kettle and a big fridge. It was nice to see but difficult to use. There were no cooking pots or pans or cutlery so how could one cook! There was just a couple of cups in the cabinets. 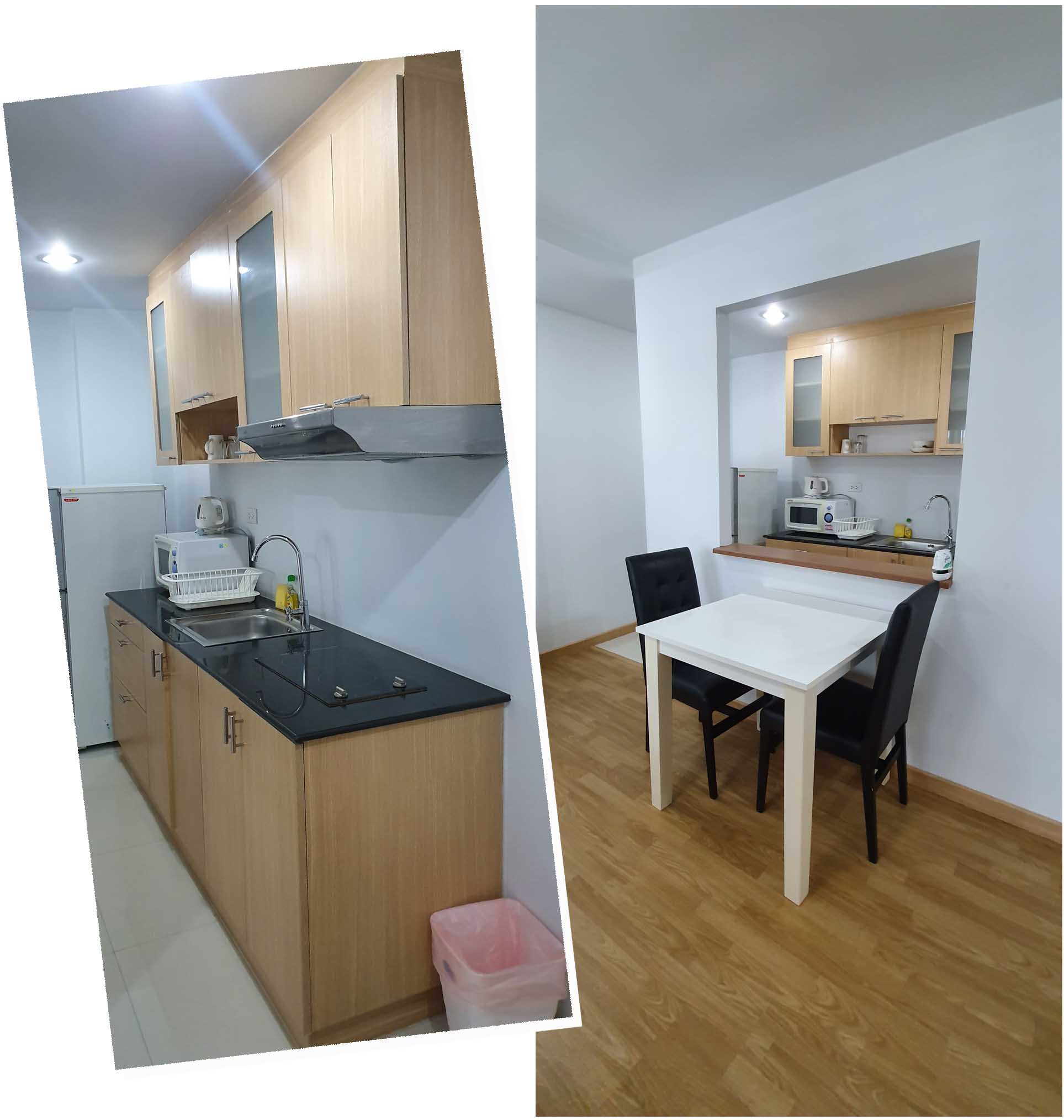 There were two toilets in the apartment, one attached toilet in the bedroom and the other was a common toilet. The toilets were huge and clean. 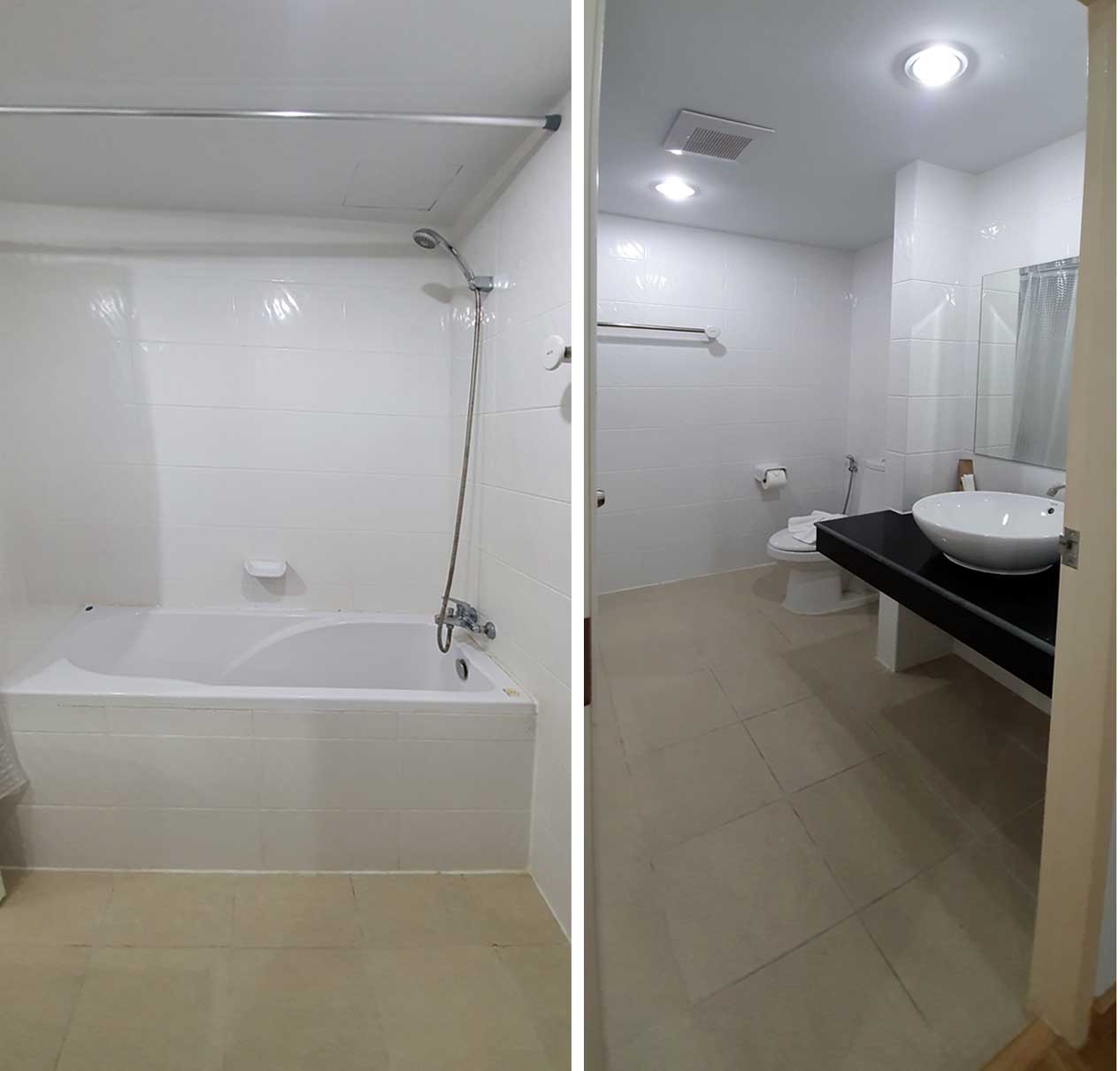