Our plan was to visit two very “special” markets. The first was a “real train” market where a train truly ran right through the market and the second was a floating market. Both the markets were south west of Ayutthaya about 88 km away. On our way to the markets we planned to stop at Bangkok to eat at one of the “famous” restaurants which we did not have the time to patronise while we were there.

Breakfast was eaten at the dining hall on the 2nd level just above the reception, it was part of the “stay” package. On the 2nd level, one side was a reading room and all the books were Japanese Manga! Apparently this hotel revolved around a Japanese theme. It had a Japanese Spa (which we did not have the time to explore), Japanese Manga and Japanese meals. 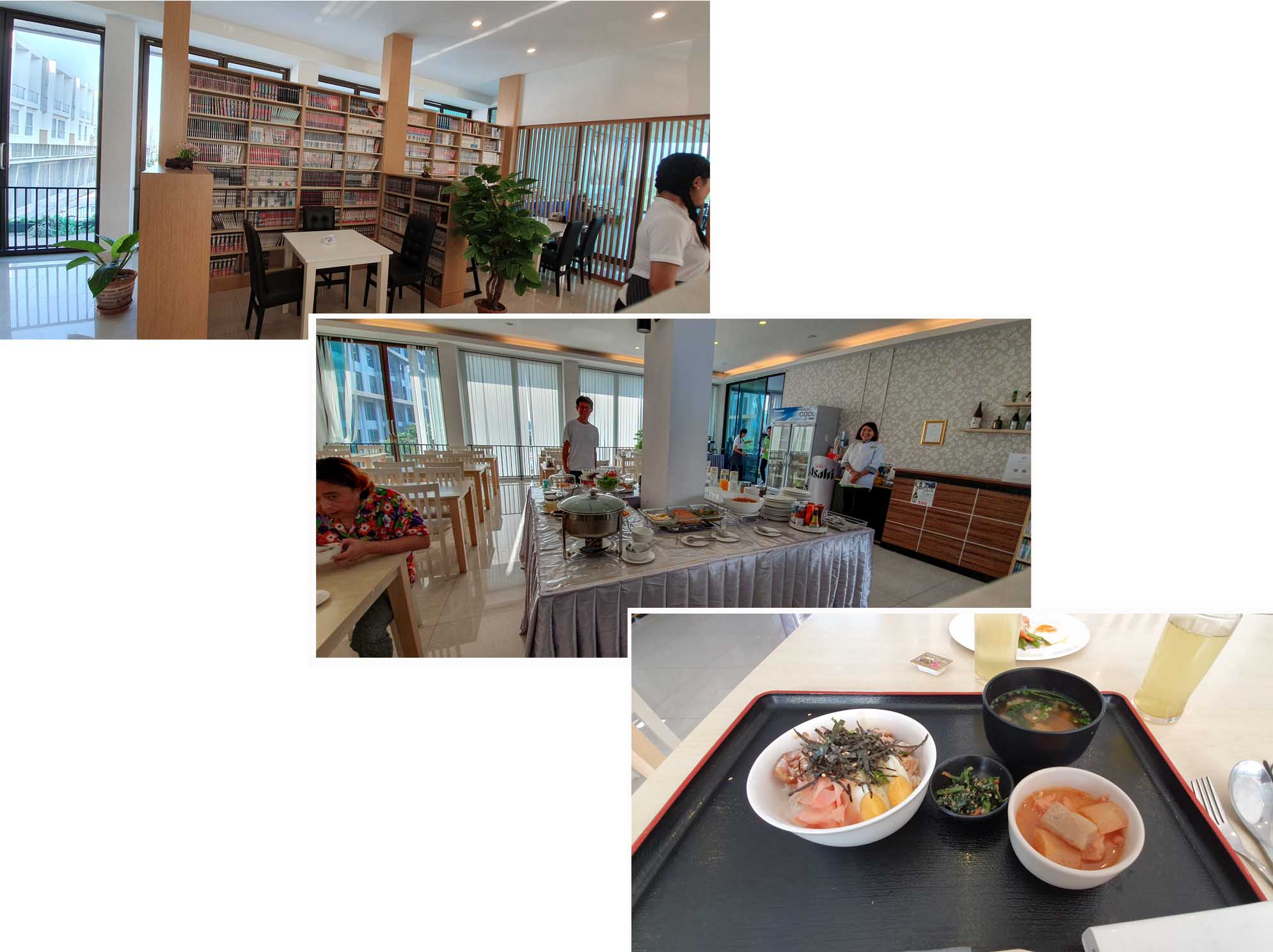 For breakfast, itnwas a simple breakfast spread and on top of that we could order a  Japanese meal. The Japanese meal comprised of rice, eggs, some raddish dish, miso soup and some vege.

Back to Bangkok for more food

Though we had three days in Bangkok we did not have the opportunity to visit many eateries. So we were going to make up for it by stopping for lunch at Bangkok on our way down to the train/floating market for lunch. Our destination was Thip Samai Restaurant (313-315 Mahachai Road) for its famours Pad Thai lunch.

Once we reached Bangkok the traffic condition became heavier, but still movable. Filing Maha Chai Road was easy but there was no parking on the road itself so we had to loop around in search of a carpark. The weather was getting HOT and we wanted to park as near as possible to Thip Samai. Luckily we found a street parallel to Maha Chai Road that allowed parking. 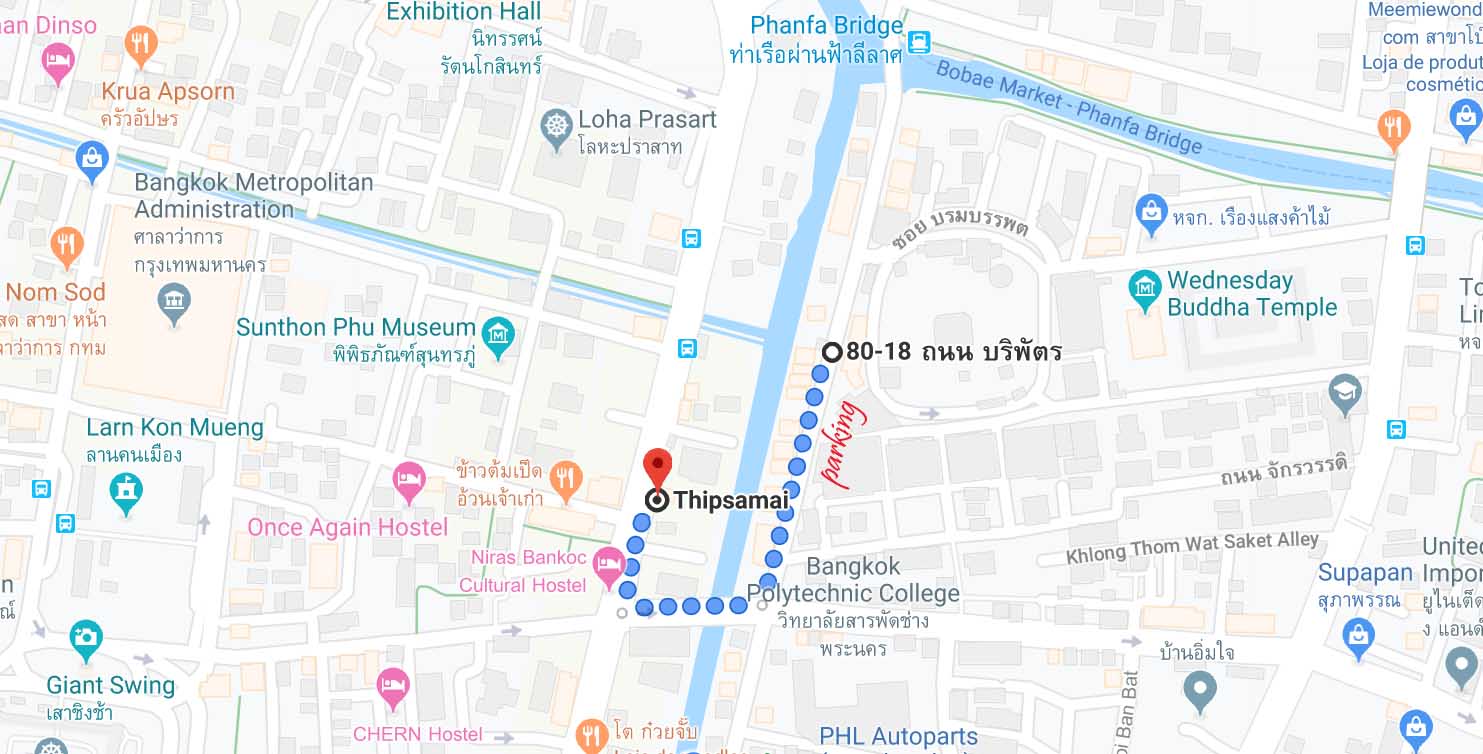 Parking and walking to Thipsamai

Once we parked our car, a parking attendant walked up to collect payment. It was 50 baht ($2.20 sgd) for as long as we wanted. The walk to Thipsama was just 300 metres and along the way there were many wood craving shops which kept distracting us from our reaching our goal,Thipsamai!

At 313-315 Mahachai we could not find a restaurant just when we wondered if we had got the wrong address we found Thipsamai signboard above a shop that was under going renovation. Oh No! Thipsamai is CLOSED for renovation!! 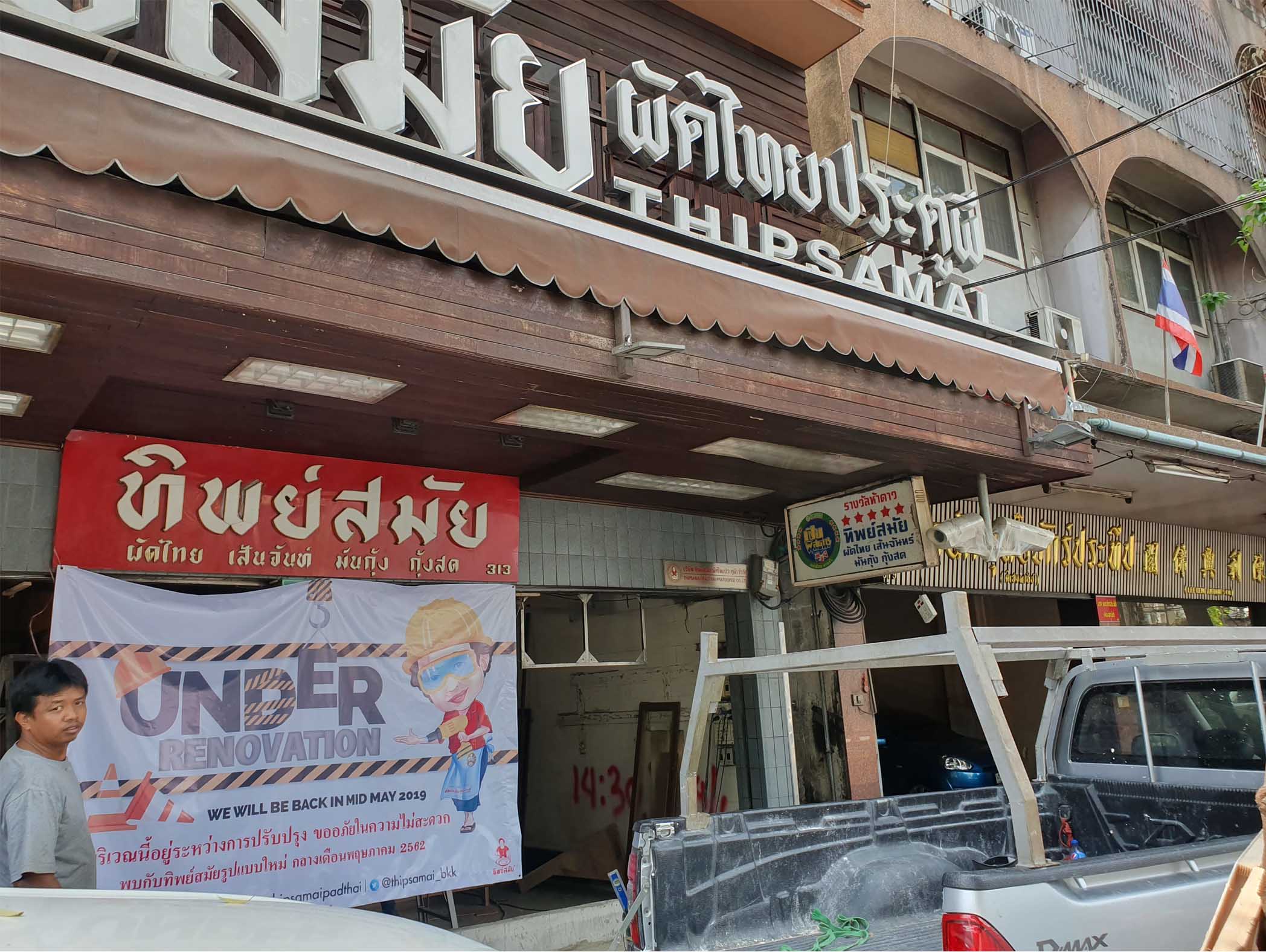 Thipsamai was closed for renovation

We could not accept our lousy luck. We paced up and down the pavement hoping that Thipsamai had set up  a temporary restaurant. But none could be found. Luckily we had a backup plan, it was “Raan Jay Fai” on 327 Maha Chai Road just a 100 metres down the side lane. Apparently in 2017 Raan Jay Fai was awarded one Michelin star.  “No!!! it was also close and this time there was no indication the reason it was closed.

We checked through the list of “famous/popular” restaurants that we had extracted before arriving in Thailand and found Krua Apsorn on 169 Dinso Rd about 500 m west of Thipsamai. 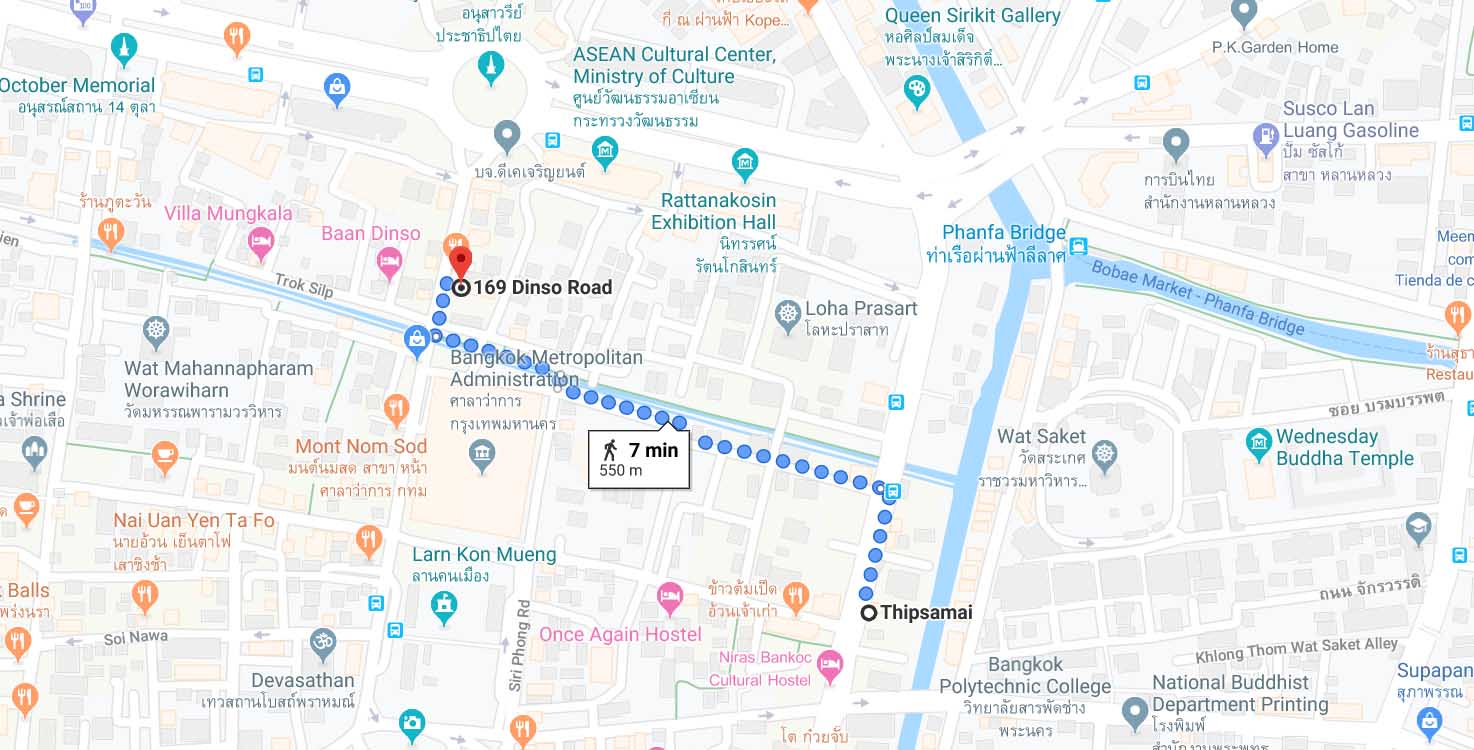 Getting to Krua Apsorn Restaurant

500 m walk seemed doable so we started our walk toward Krua Apsorn. It turned out to be a fun walk. At one stage we had a hard time crossing a zebra crossing on a busy road. The cars were zipping passed with not sign of stopping for pedestrians. It was only when a local gestured to a blue container with a few red flags sticking out that we realised we had to hold a red flag to crossed the road. We figured it was to attract the attention of the motorists so that they slowed down their cars and stopped for us to cross!! 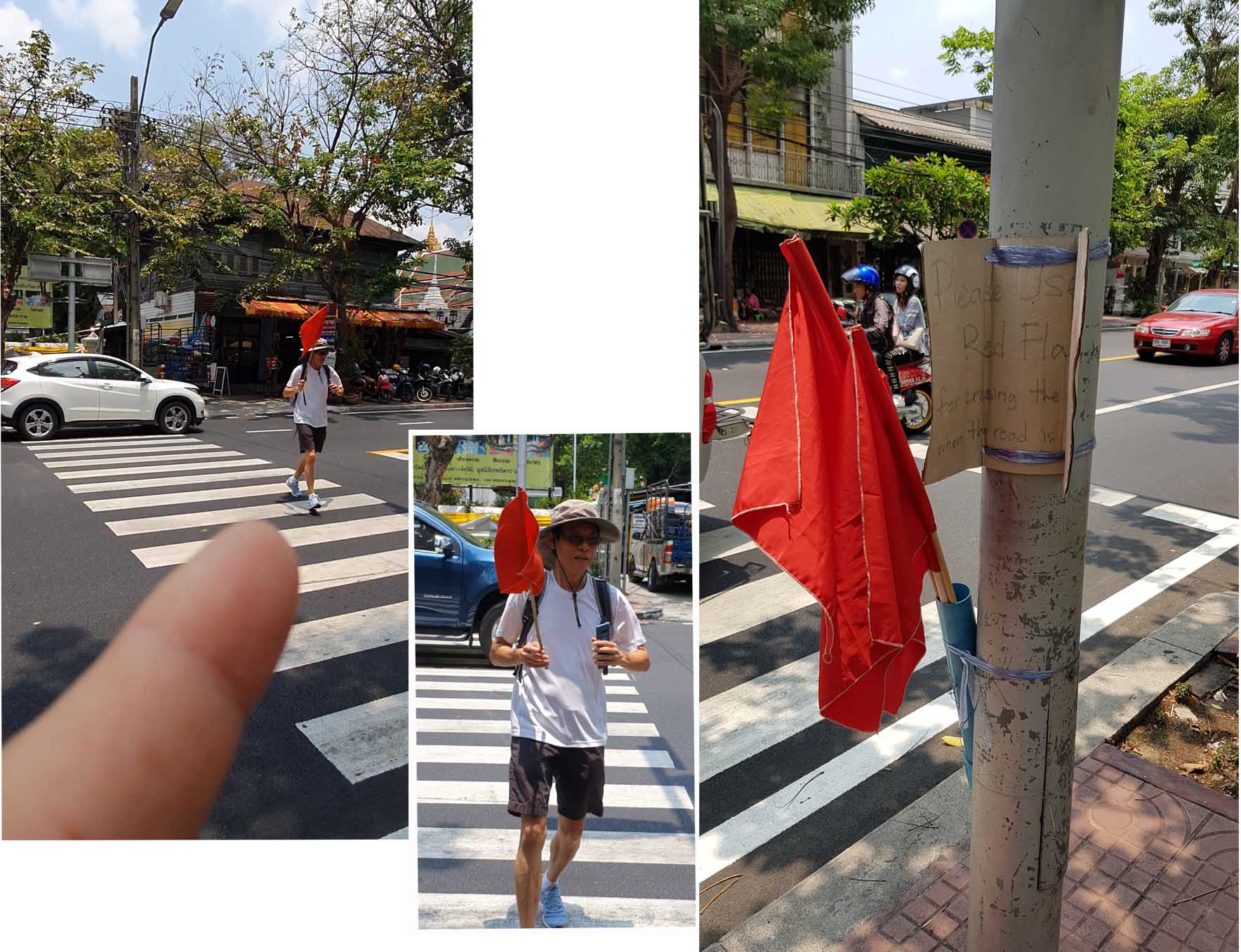 Crossing the zebra crossing with a big red flag!

It was so amusing to see each of us holding a flag, raising it up like a school kid to cross the road. Our route then took us through the back lane of a row of houses, this back lane was not dirty at all. It was pretty fun as we encountered pets like dogs, hens and cocks. 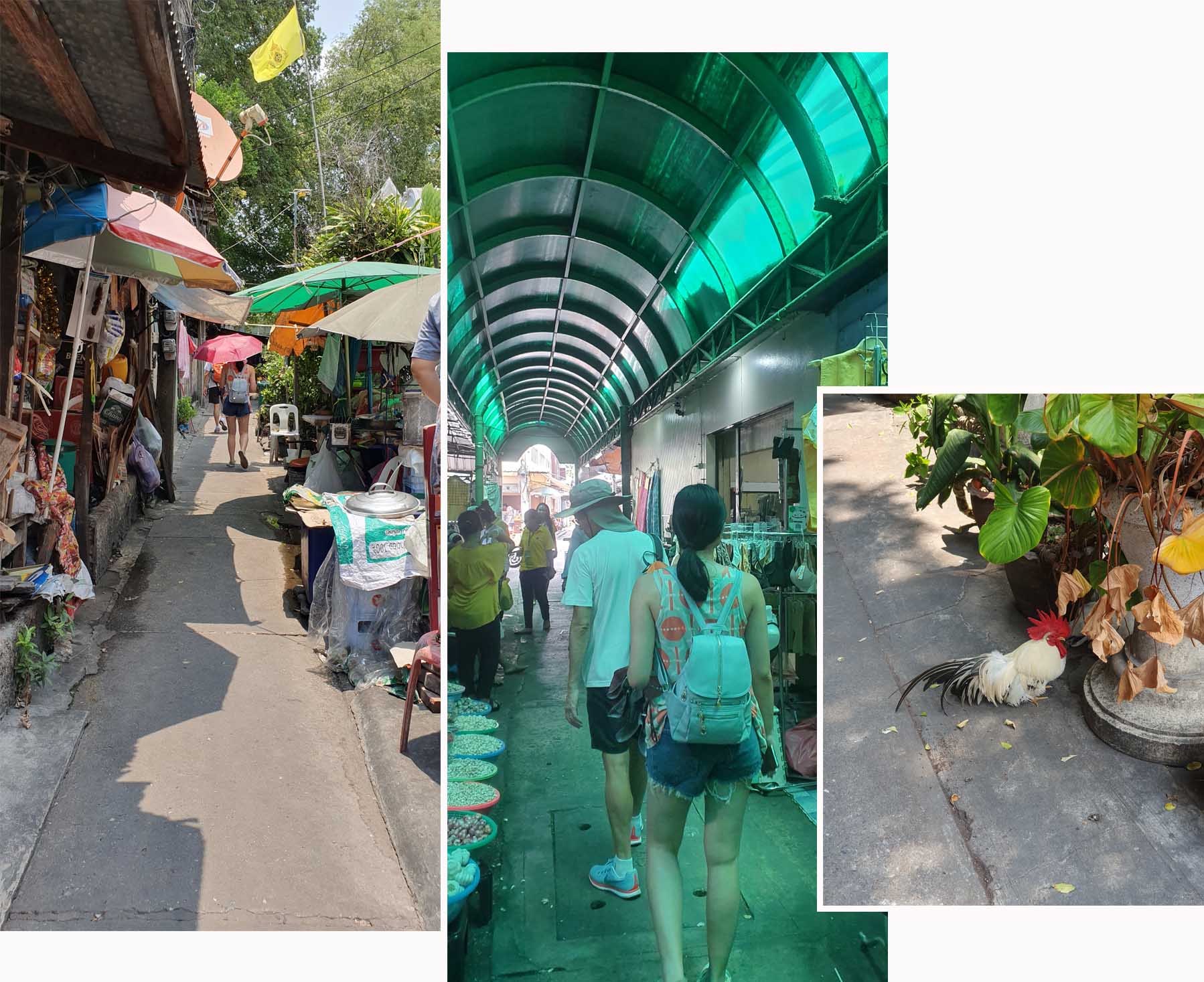 We reached Krau Apcorn restaurant just before 11 am and the plae was not crowded yet. The place had air-con and looked clean and big. 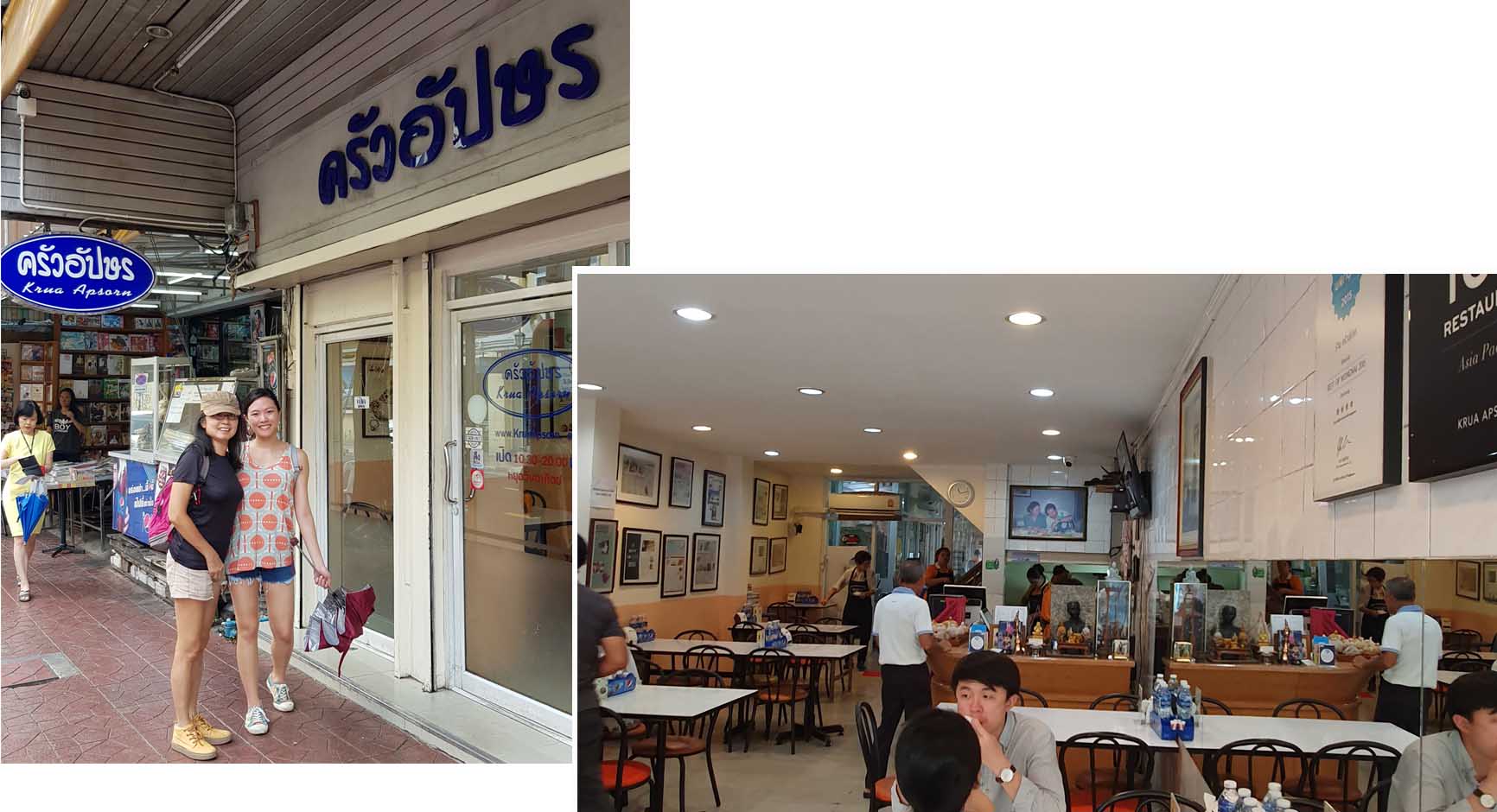 It was just 2 hours after our big meal this morning at Wellness Park Residences at Ayutthaya, we were not particularly hungry, we just wanted to eat Krau Apsorn “signature ” dish which was “Fluffy Crab Meat Omelette. The meal was good and the price was reasonable. 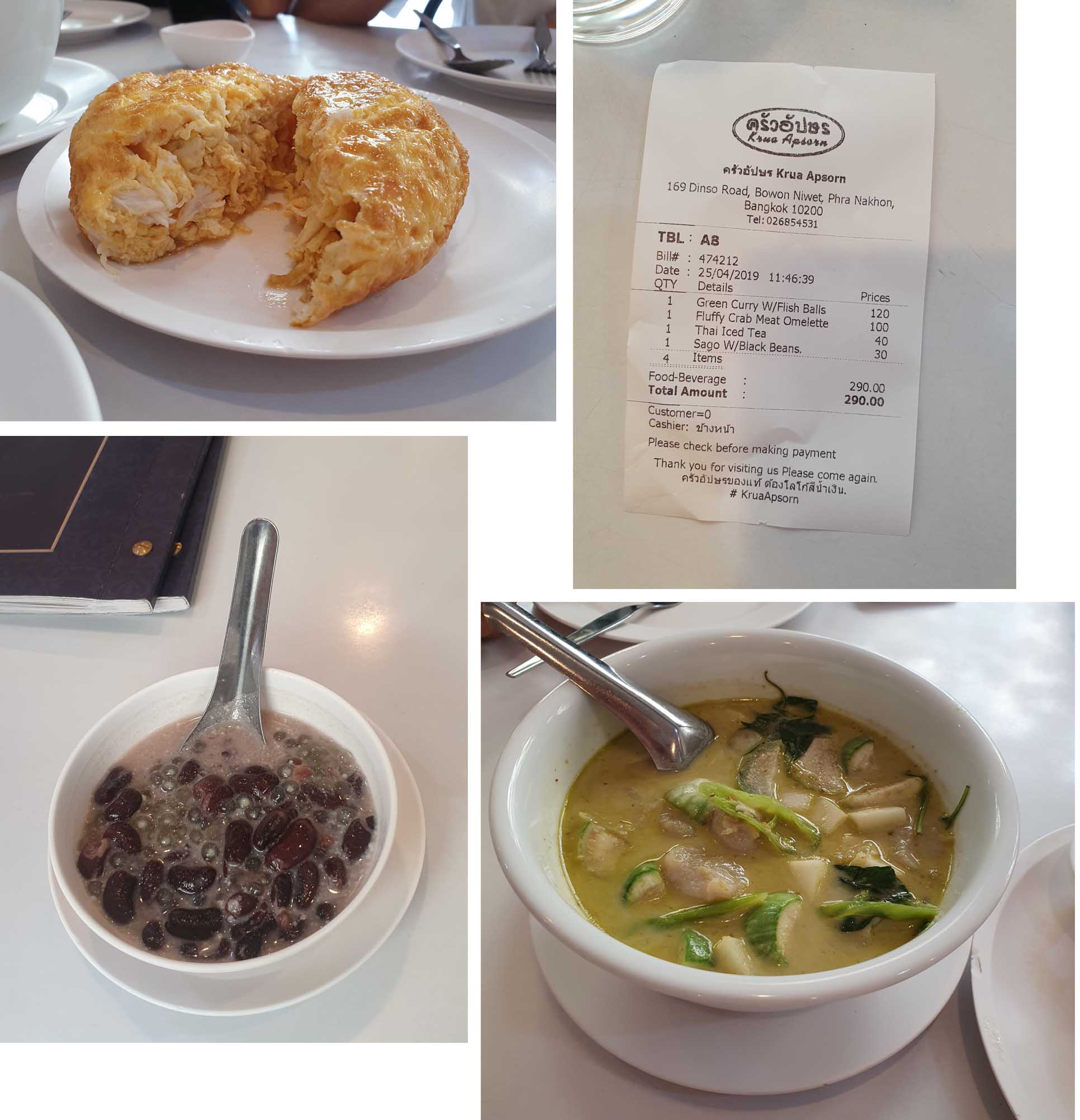 The drive from Bangkok to MaeKlong Railway Market was about 74 km and should take about and hour. Unfortunately the traffic was pretty heavy so we took a while getting out of the city. It took us about 1.5 hour to reach our destination.

The train would pass through the market at 2.30 pm. If we missed the 2.30 pm “train passing” the next passing would be 3.30 pm. It was our first time to this train market and we were not familiar with the vicinity – like where to park and after parking the path to the train market.

Luck was with us, we did not have much trouble finding a place in one of the roads near the train track to park our car. Parking was free too. Once parked we walked into a row of shop/food stalls in the direction of the train track and found the “train market”!

It was amazing to see stalls after stalls lining both sides of the train track. Some of the stall had their tables with their goods practically on the track. The stall canopies covered over the train track providing plentiful of “merciful” shades for visitors hiding from the fiery sunlight.

We still had about 20 minutes before the train arrived this gave us times to walk down the train track. As we walked we looked left and right at the stalls on both sides checking out the “stuffs” that were sold. This market sold fresh/raw food, nothing we would like to buy. This place was thronging with visitors, most like us were looking around and waiting for the train. 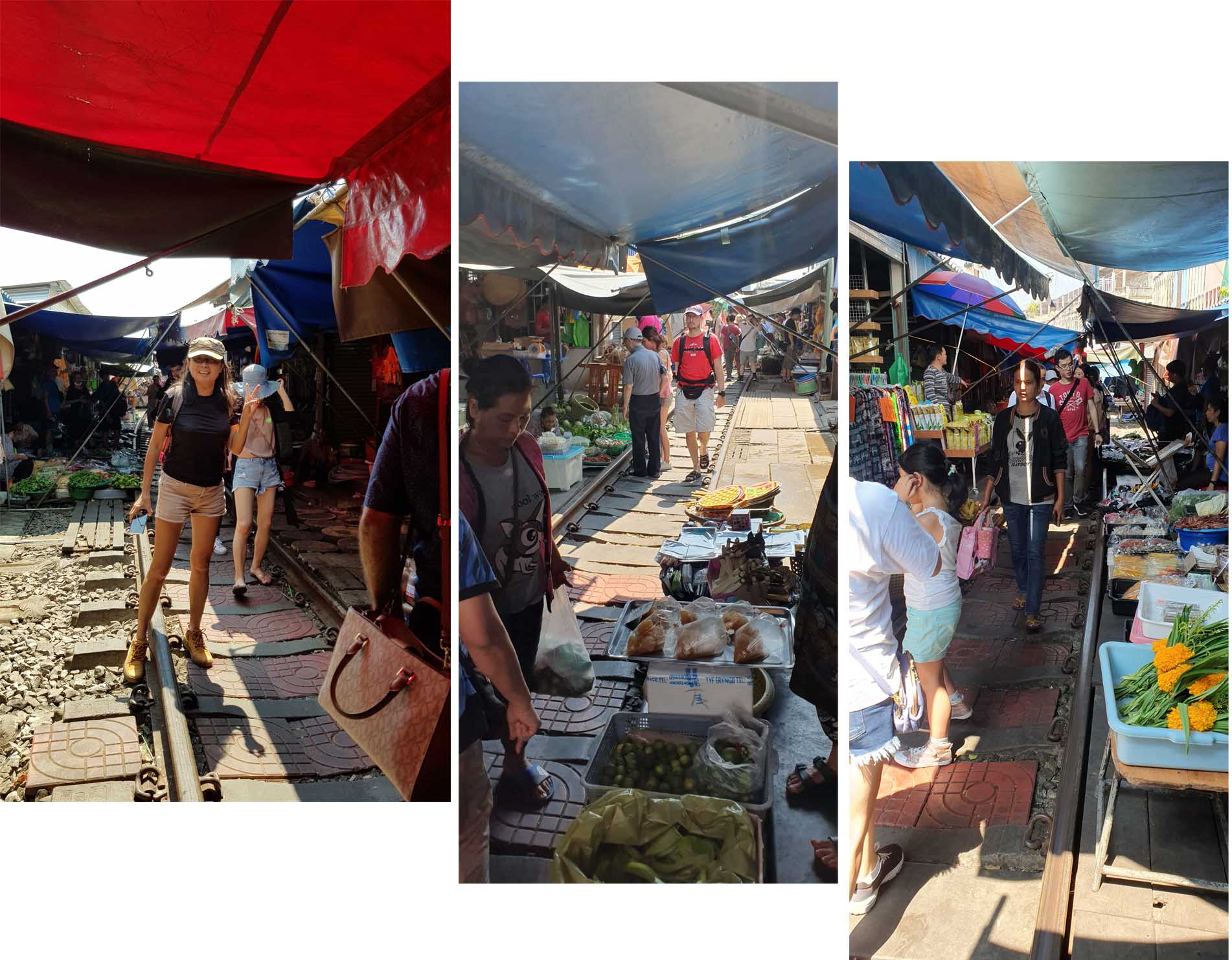 Just when we were wondering when the stall owners would lift away their canopies which were hanging above the train track, the “removing action” started. Canopies were lifted and tilted inward and tables (on rollers) were pushed off the track. Soon the track was cleared just in time for the train. 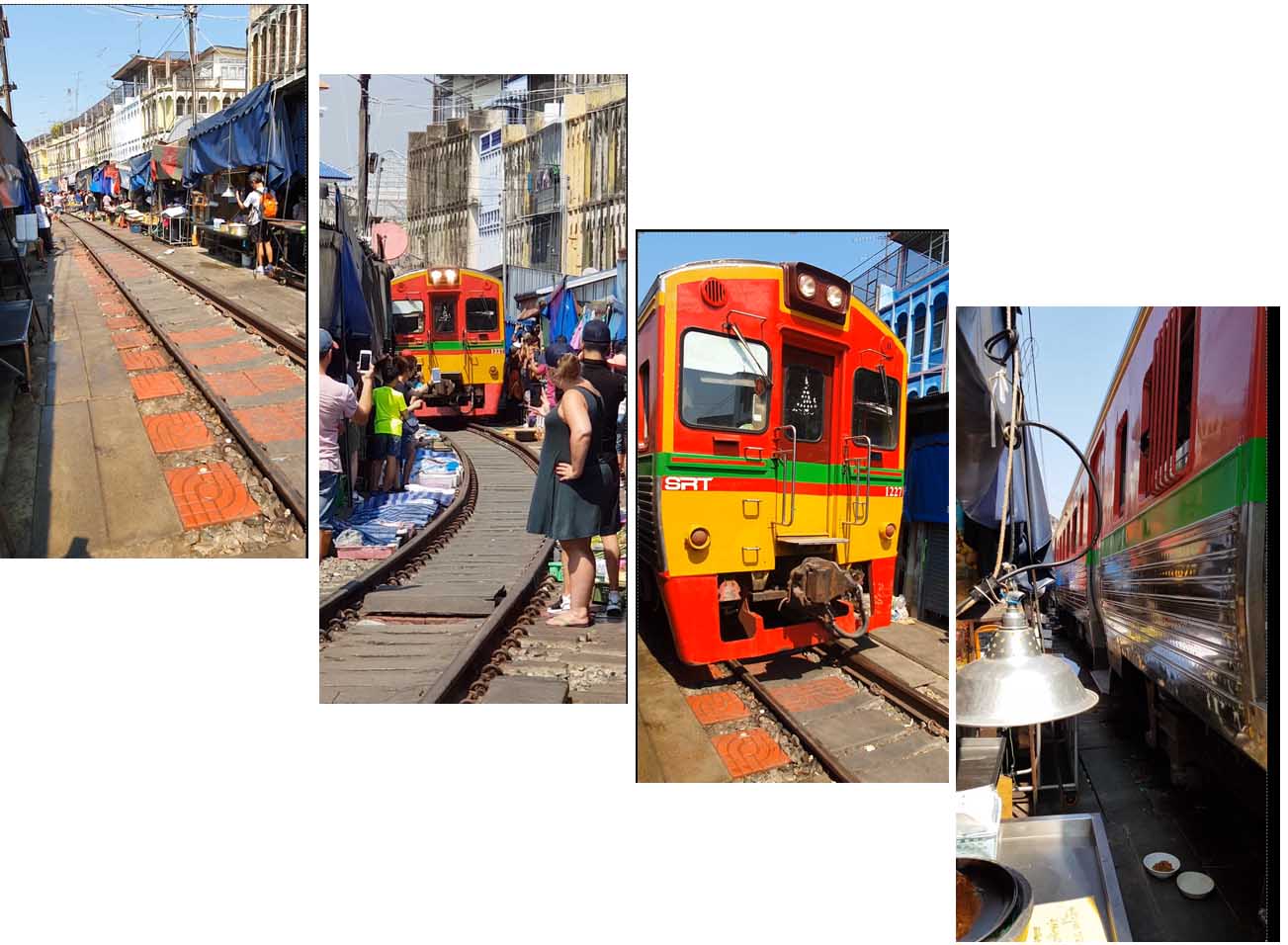 Arrival of the train at Maeklong Train Market

We thought the train would just “zoom” past but it actually slowed down as it approached the market and went slowly through. Once the train passed, the stalls quickly reverted back to their original stage – canopies down and back, tables over the tracks. It was pretty fascinating to see the train and the market co-exisiting “harmoniously”. These “removing” and “reverting” activities cycled many times a day! 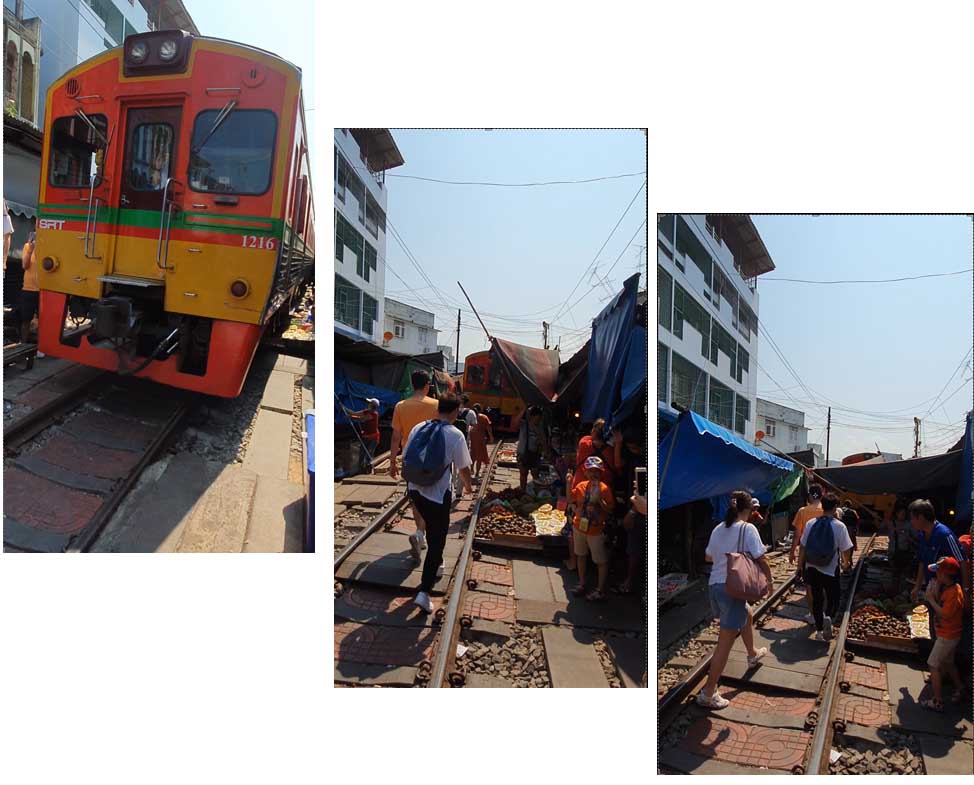 After the train left we hunted around for a cool place for a long cool drink. We found it nearby. The cafe was “Inthanin” a nice moden looking cafe. It was a relieve to walk into an aircon cafe. We bought three drinks and a croissant. We thought we ordered ice-blended drinks, but they were not, just coffee on ice. The total cost was 245 baht ($11 sgd), the drinks and the croissant weren’t so great but the aircon was fantastic! 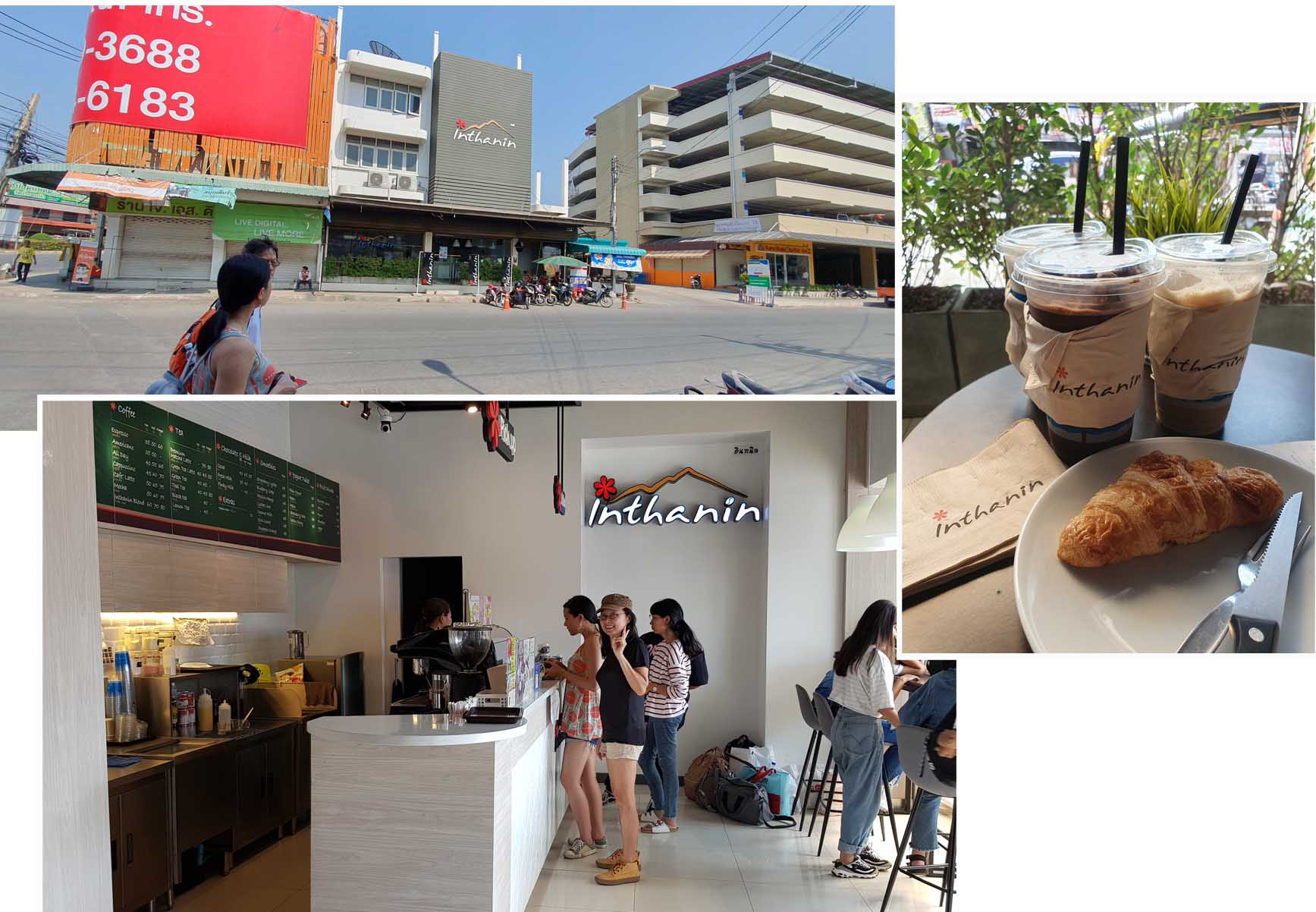 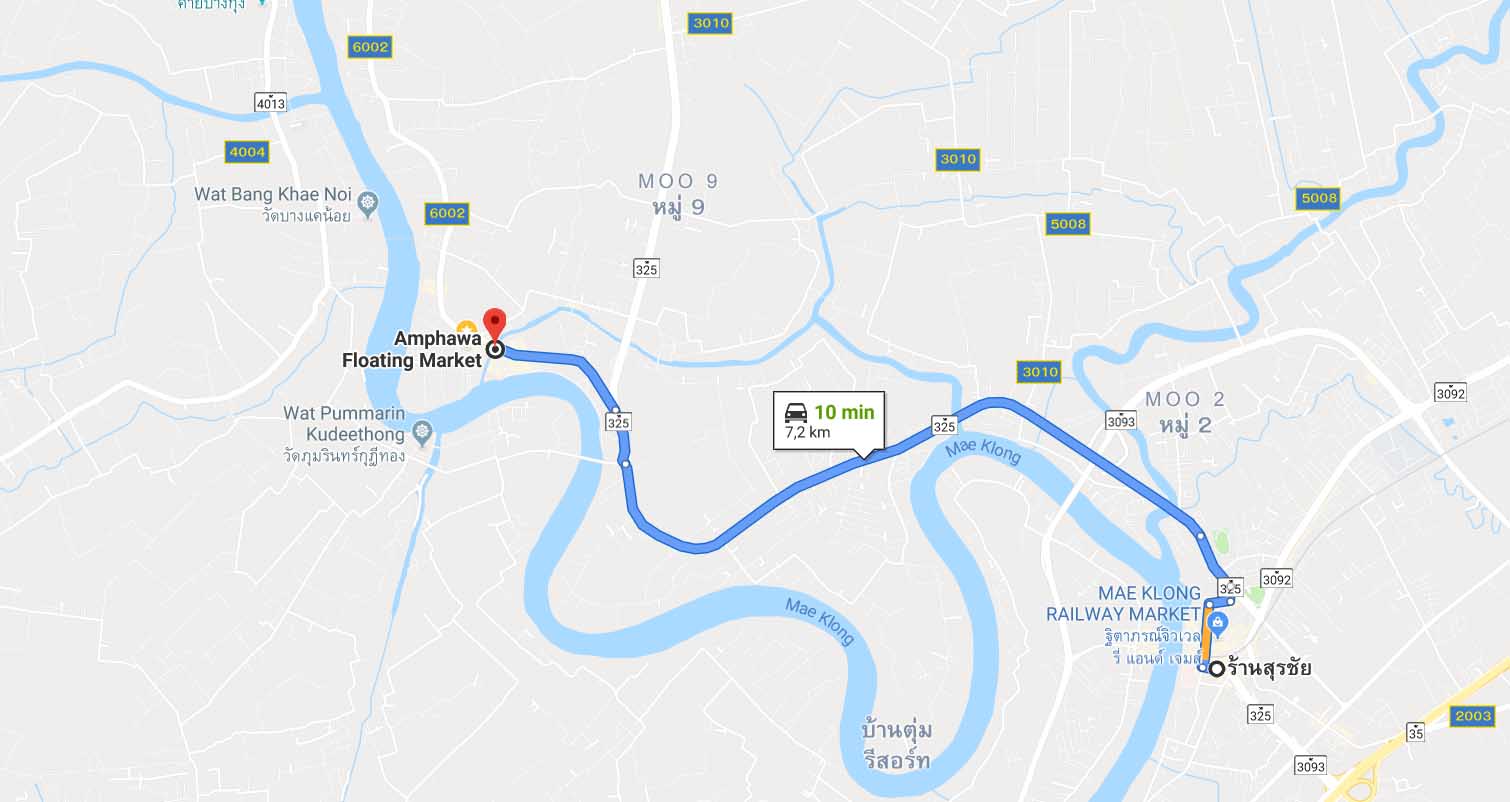 Unfortunately we realised too late (air tickets already purchased) that the one night we had was a Friday night and Amphawa Floating Market being a weekend market (Saturday and Sunday) would be “lifeless” on a Friday night. 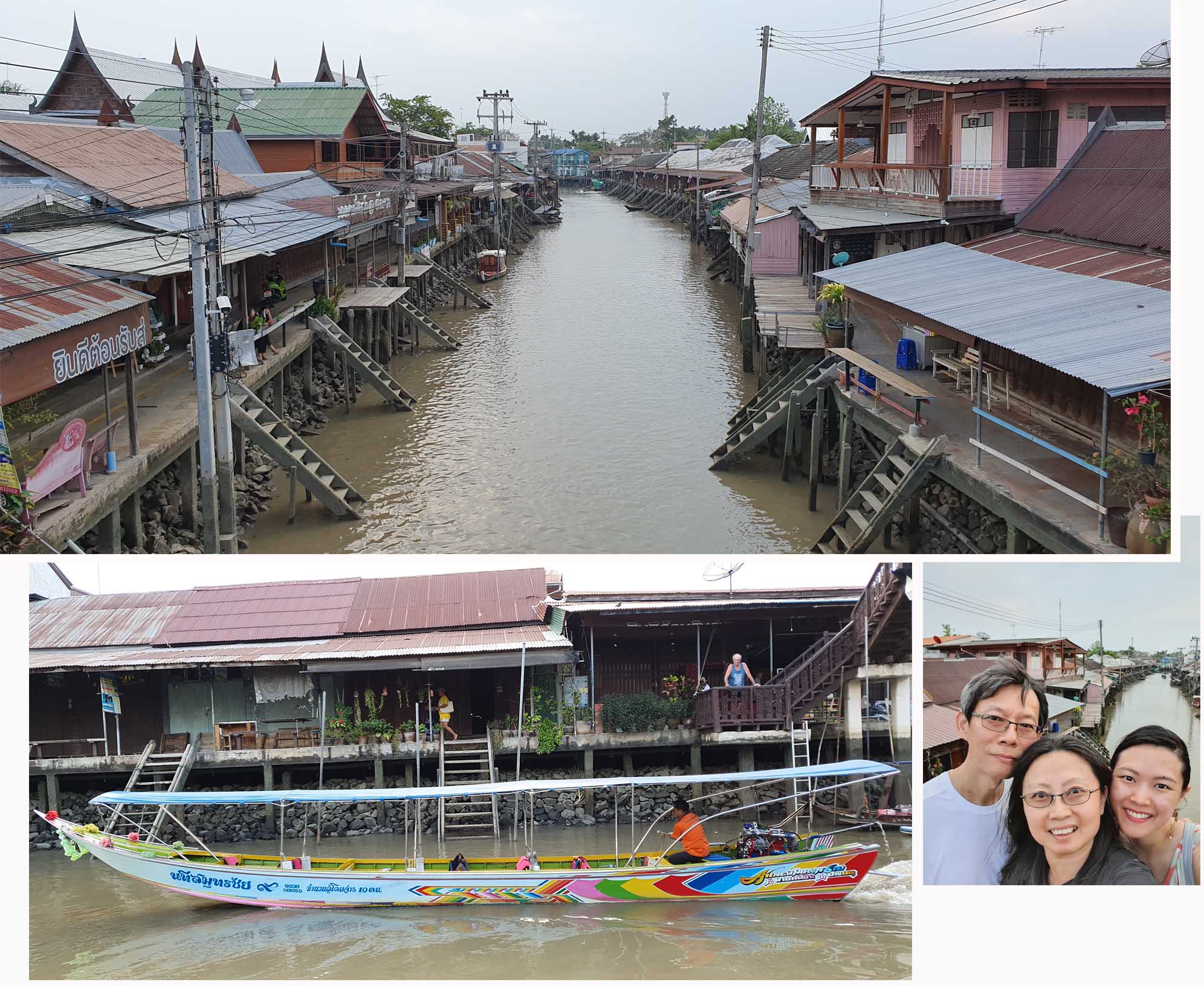 When we reached Amphawa Floating market majority of the shops by both sides of the Amphawa River were closed. A couple of restaurants  were opened but there were not many customers. Occasionally one or two sampan-motor-boats would speed by. The entire place was pretty “dead”. 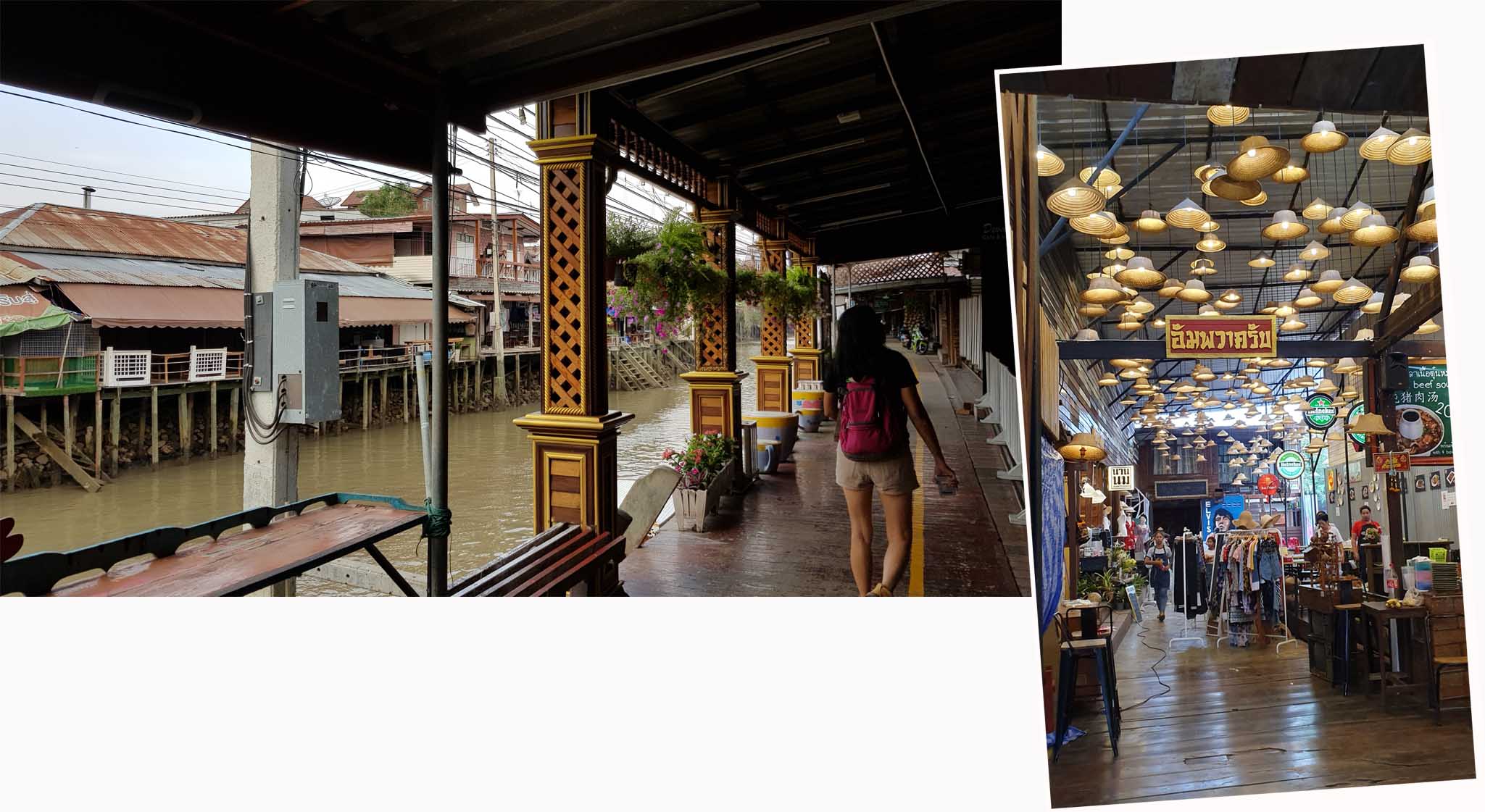 Our stay of the night was at The Peace Hostel. We booked it on Booking.com It was the nearest hotel to Damnoen Floating Market. We would normally preferred to stay in room with ensuite bathroom. At The Peace Hostel there were no such room, everybody had to use the shared toilet/shower rooms provided.

One mean reason we booked this hostel was that it was beside Damnoen Floating Market which meant we could get to the market easily in the morning. This hostel also had plentiful of good reviews and was also relatively new so we felt that it might not be a bad deal to stay here.

The hostel was about 14 km from Amphawa Floating Market and our drive took only 15 minutes. 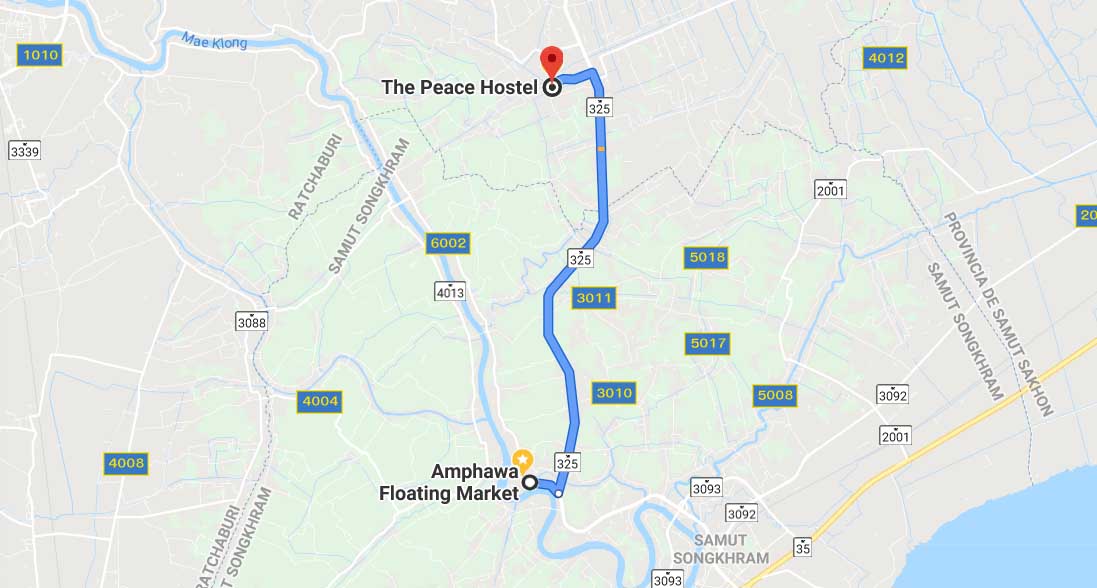 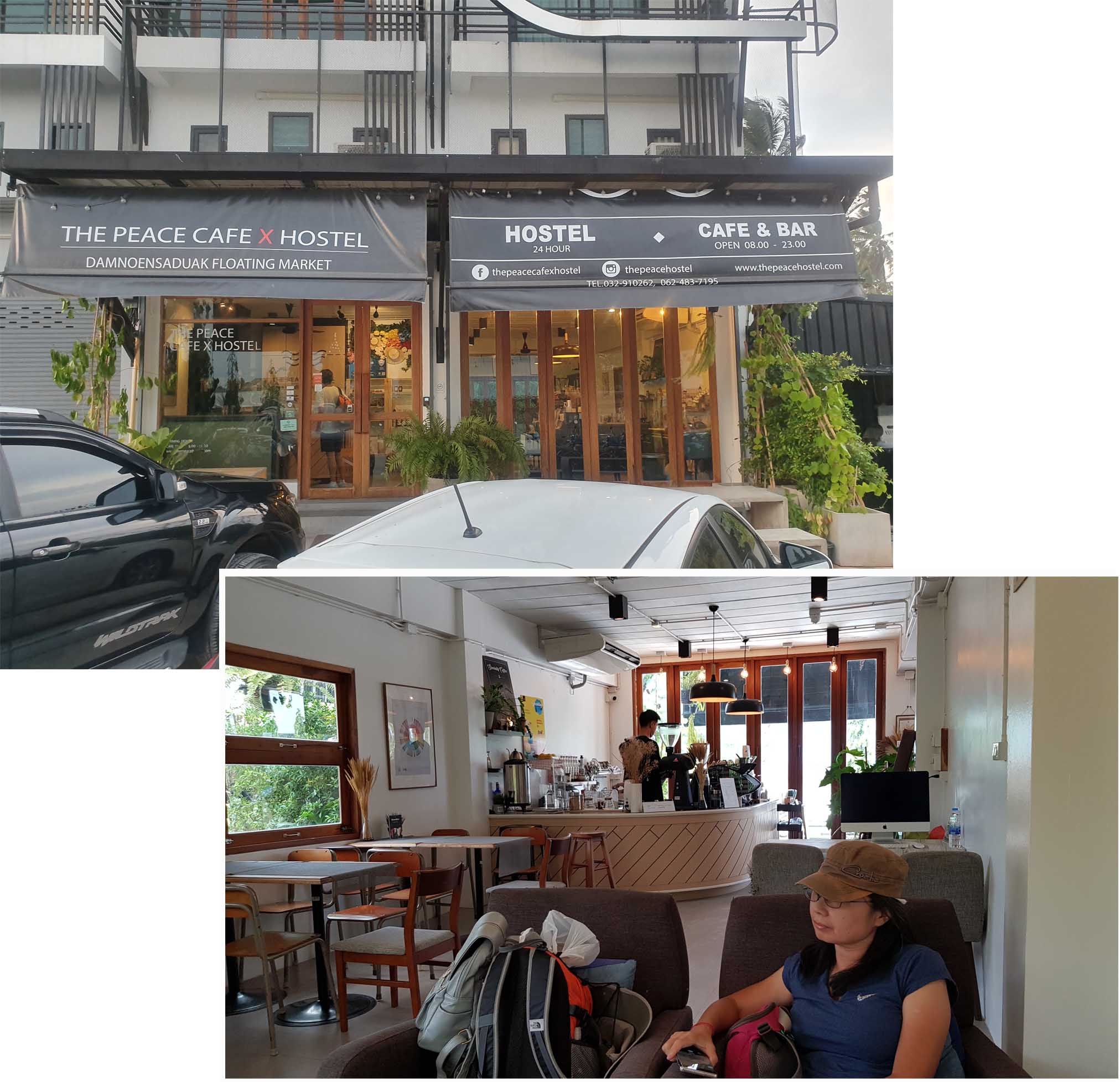 Checking in was pretty easy as the boss (a young man) spoke English. On the ground floor was a cafe/bar/restaurant. From the cafe we crossed through a secured (electronic key) door into the the next building which was the” hostel portion”. On the ground floor of the hostel portion was the shared toilets and shower rooms. Bedrooms and toilets (no showers) were on the two upper levels. Our room was on the highest level. It had a bunk bed and a double bed, it was a room for four and costed 1600 baht ($70.50) a night.

The furnishing looked pretty modern and the place was very clean. The bunk beds were big and came with individual light and power plug. 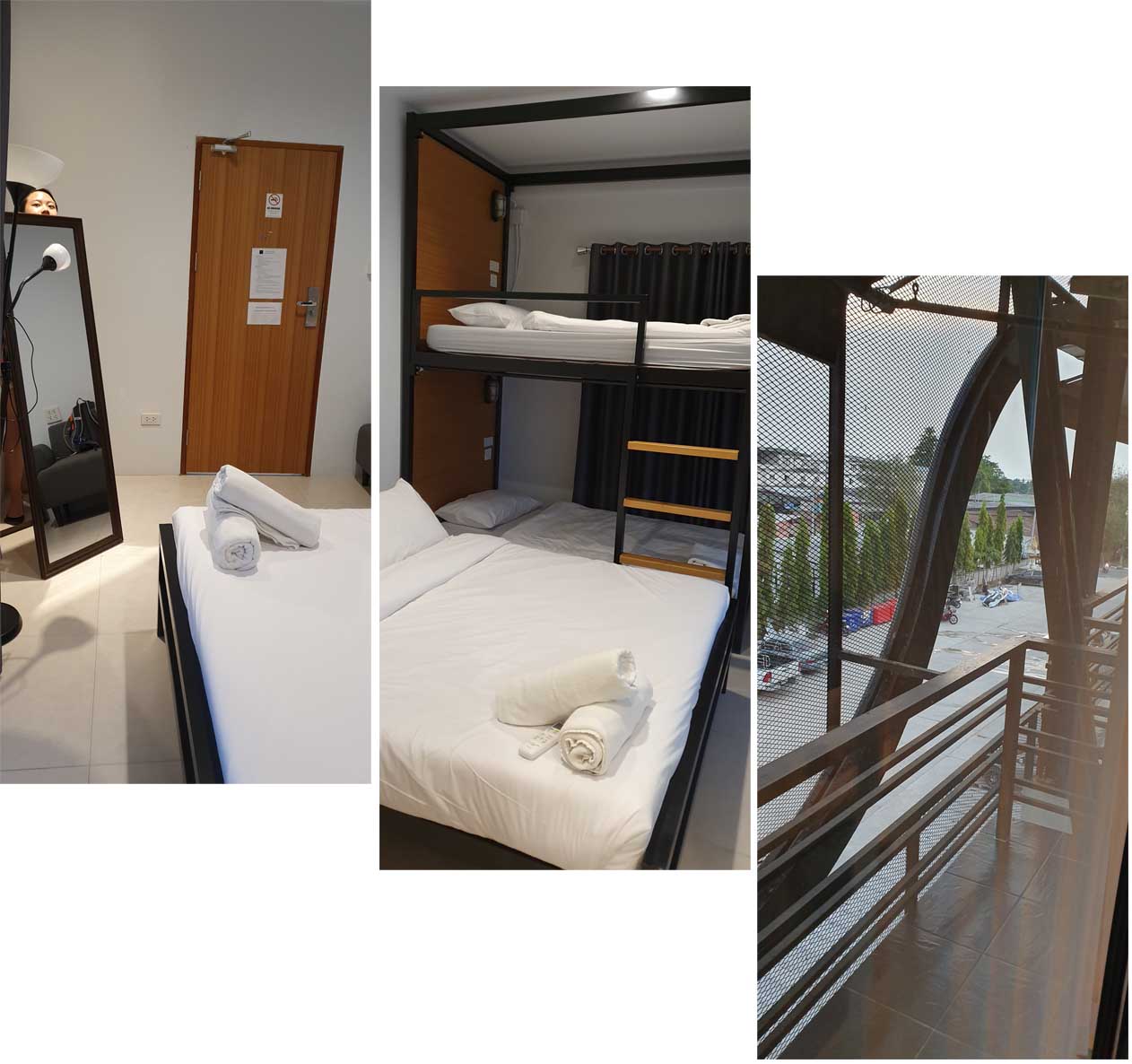 Our Quad Room at The Peace Hostel 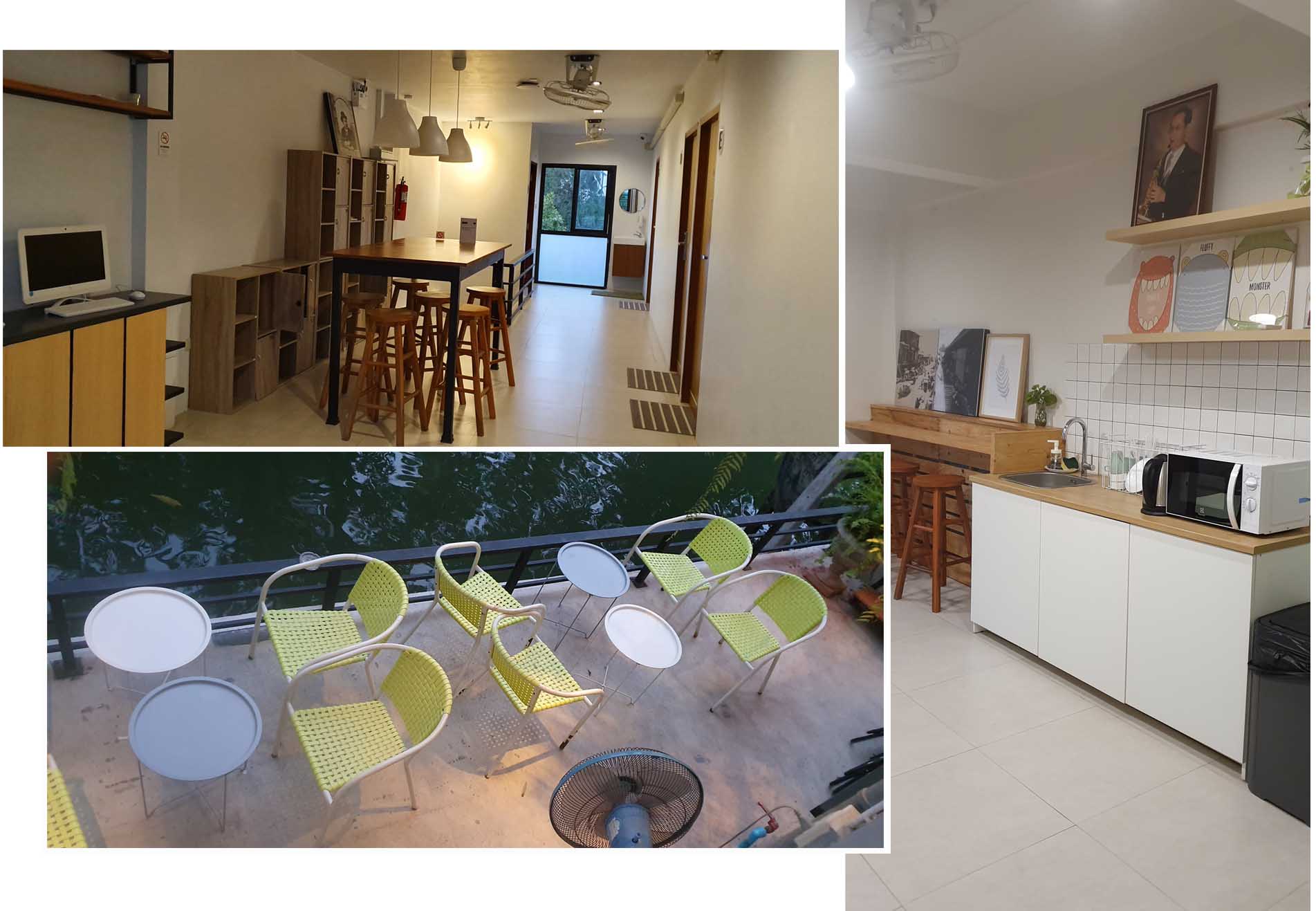 Common/shared Spaces at The Peace Hostel 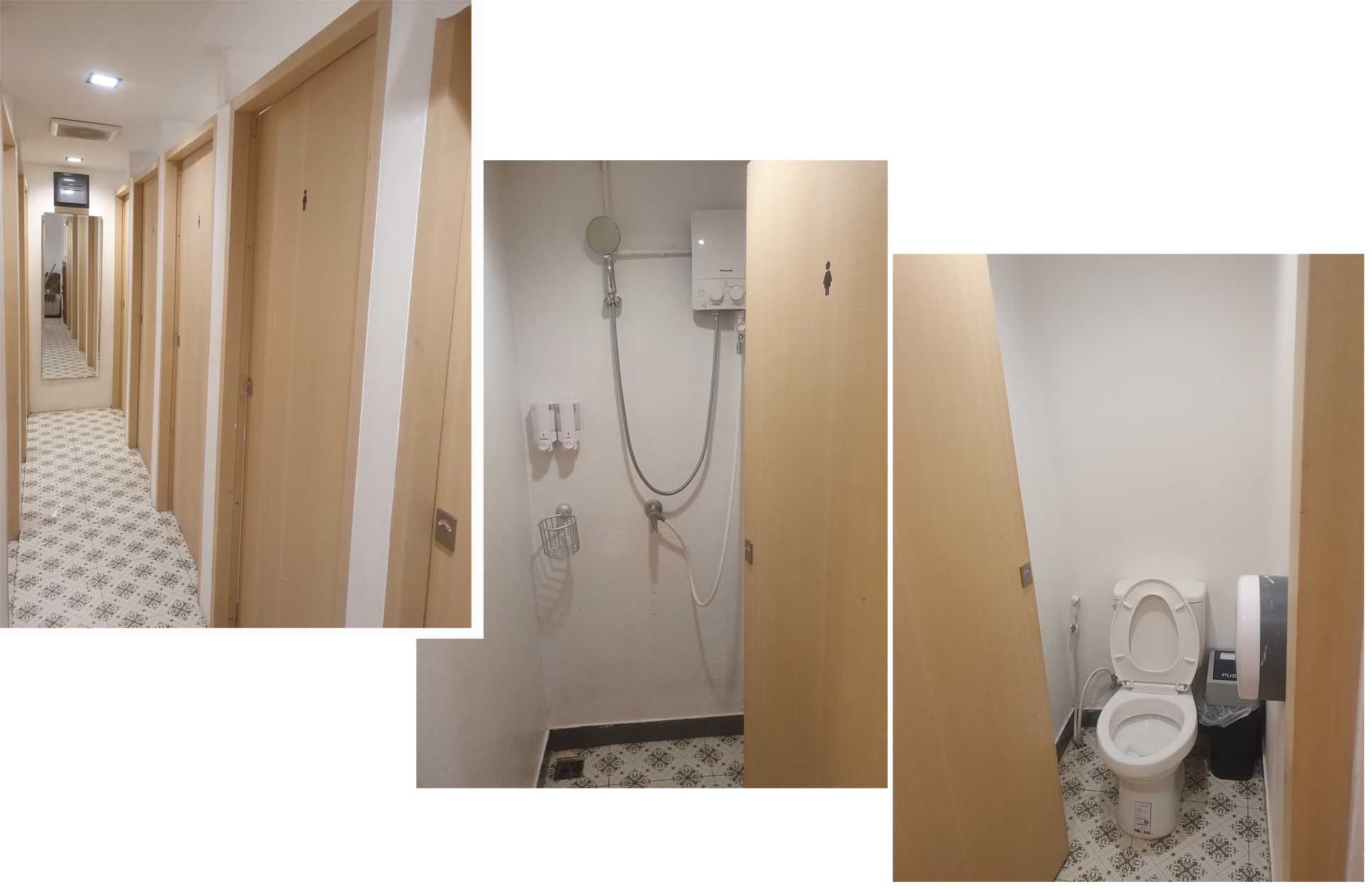 We were rather tired and did not want to venture out too far for our dinner. With Damnoen Floating Market already closed (ended at 6 pm) we decided to have our dinner at the cafe/restaurant of The Peace Hostel. We ordered a pizza, a green curry pasta and gyozas. The whole bill came up to 392 baht ($17.50 sgd). The food tasted “averagely”, so..so.., edible definitely not fantastic. 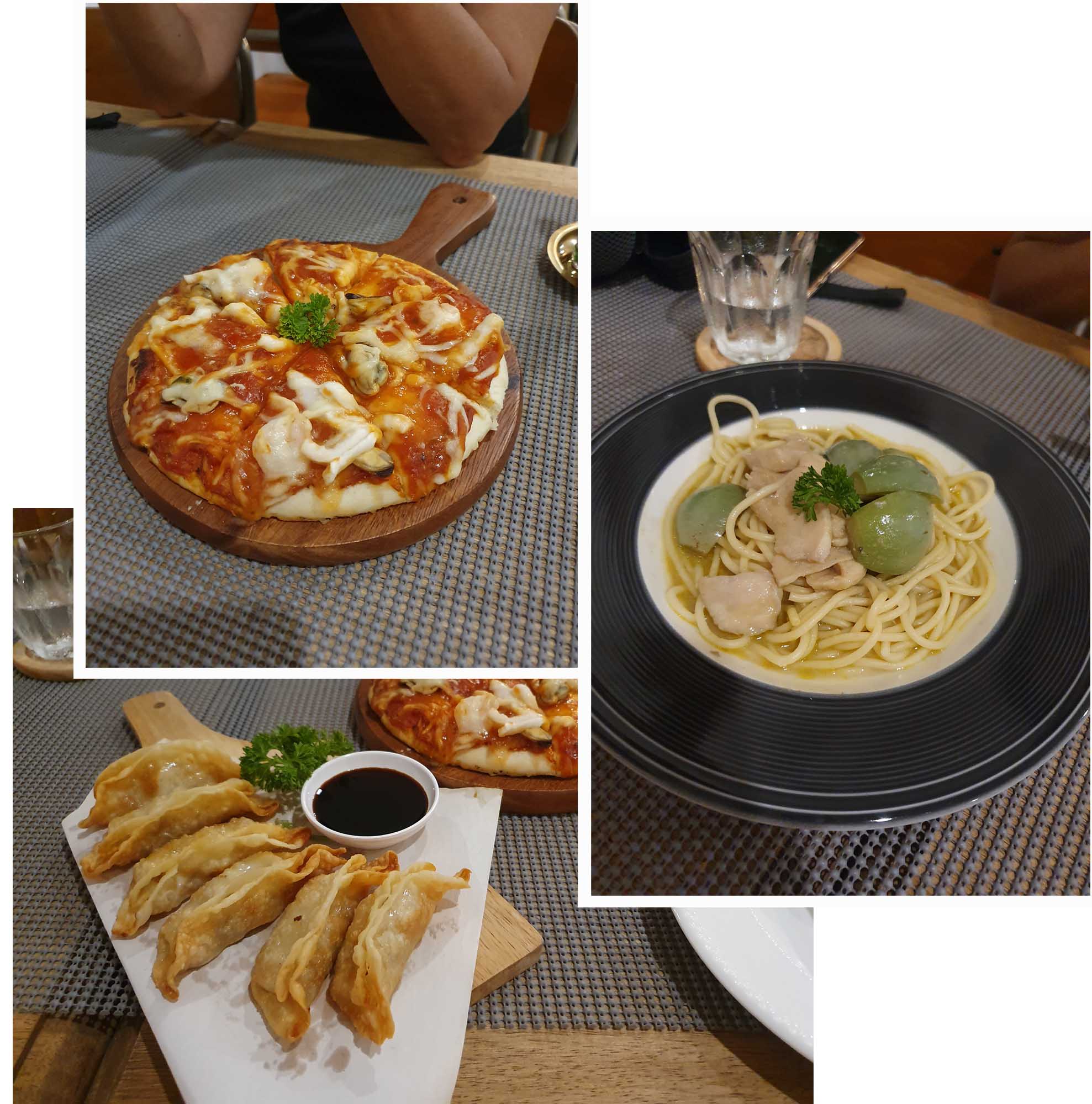 Dinner at cafe of The Peace Hostel