We spent two days at Valles Pasiegos. Valles Pasiegos was a region formed by the three adjacent valleys crossed by three rivers, Pas River, Miera River and Pisueña River. It was all about green countryside, local traditions and customs and was one or the most beautiful spots in Cantabria, in northern Spain. 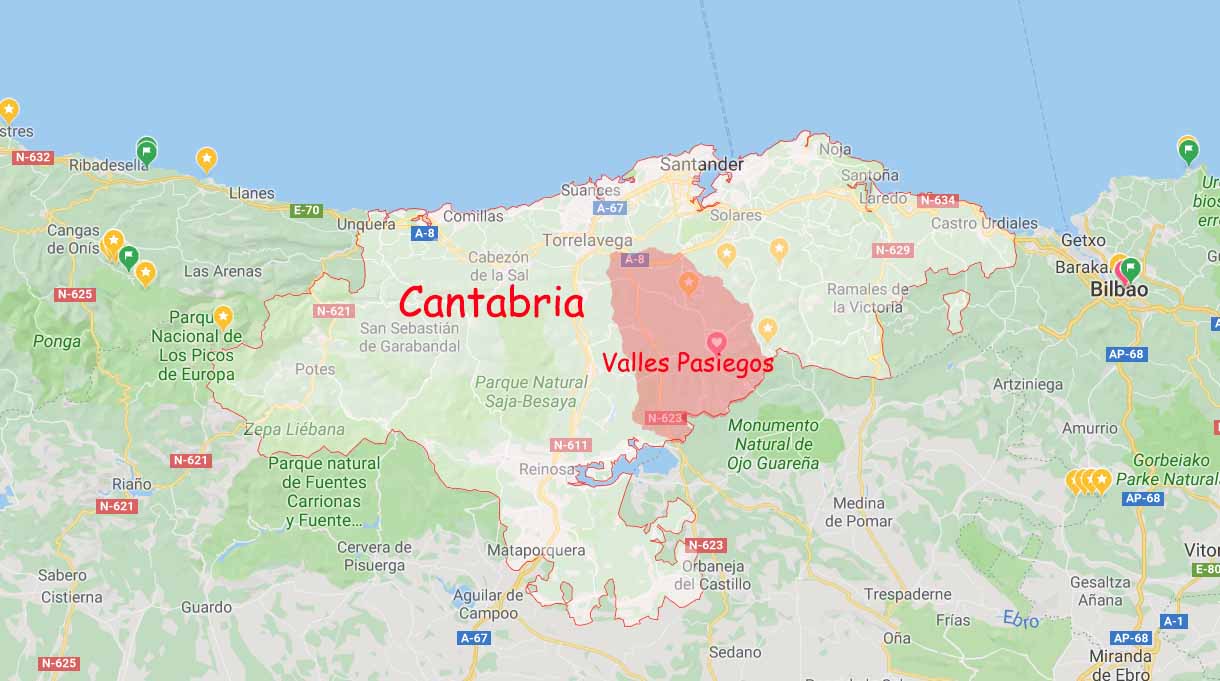 The weather was no good, it was gloomy for the two days we were at the Valles with occasional rains. With uncertain weather we forgo all the trekking plans. We visited a couple of villages in the valleys and spent the time doing not much, just enjoy the cool weather and the “gloomy” scenery as much as we could.

Getting to Valles Pasiegos

From Bilbao to Vega de Pas (one of thevillages/ towns in Valles Pasiegos) was about 134 km, a straight drive without stop would take about 1.75 hour. The weather did not look promising when we left Bilbao at about 11 am, we were keeping our fingers crossed as Valles Pasiegos was more than a 100 km away and the weather there might be different. 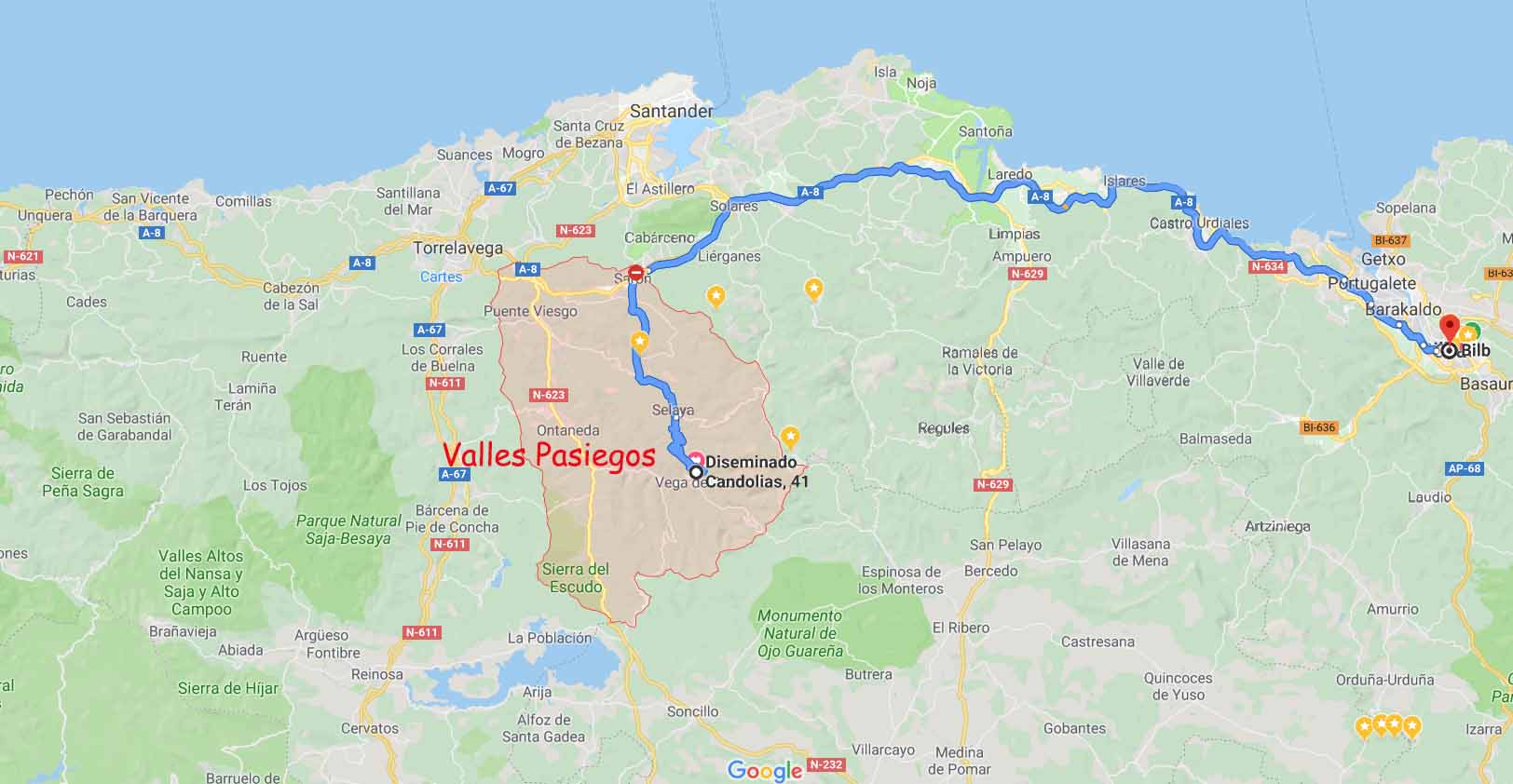 Valles Pasiegos was a huge area of about 600 km² and there were many villages/towns that offered accommodations to visitors. We chosen to stay in Vega de Pas which seen like a quieter town with lovely nearby miradors (viewpoints). By about noon we reached the start (northern part) of the Valles Paseigos region. The gloomy weather had not improved, it had actually worsen. Gloomy, drizzling and misty. 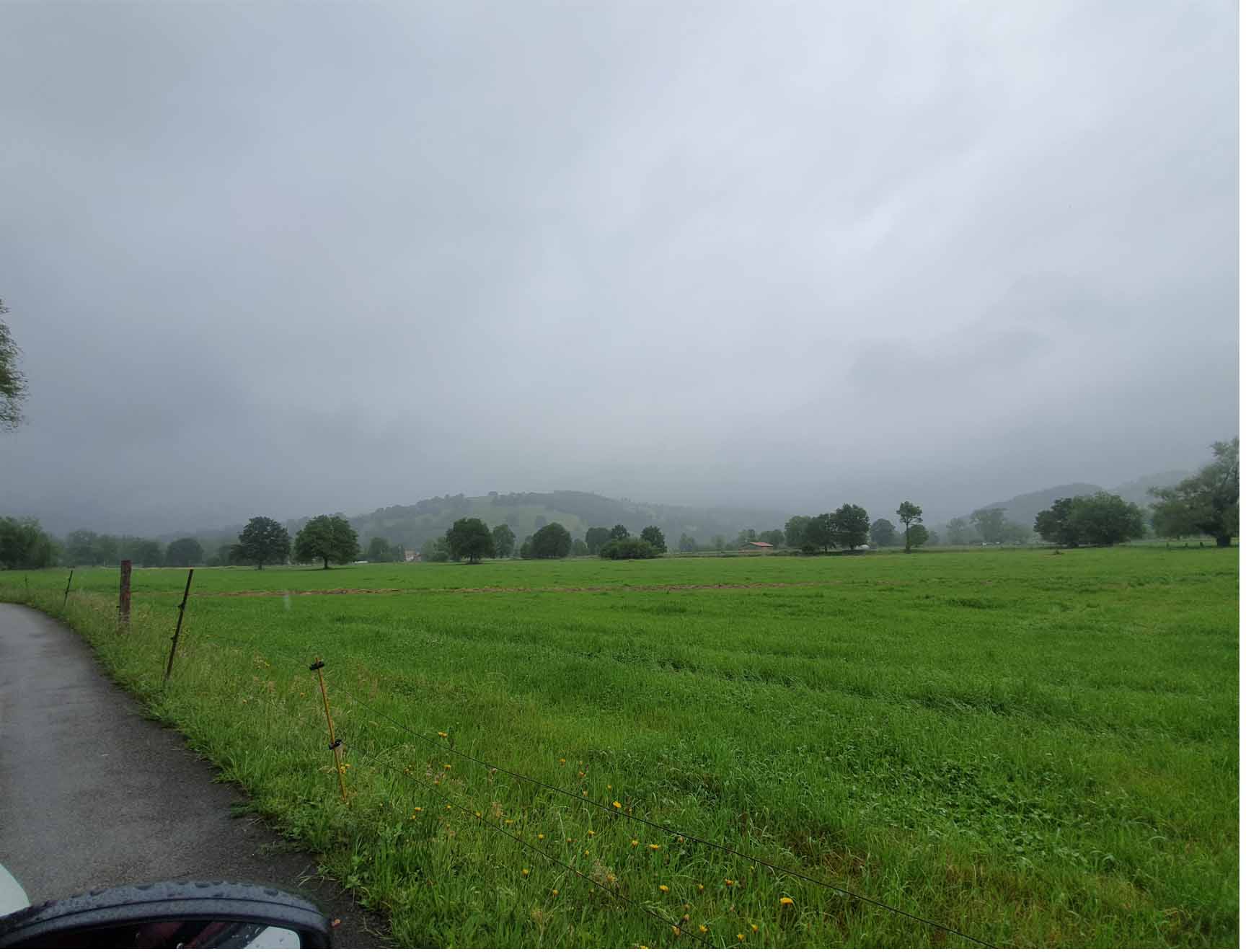 We were confined to our car throughout the journey as it was just too wet to get out of the car to explore. By about 1 pm we reached a small town Selaya-Llera and made a stop for coffee. There were a couple of cafes along the main road and we went into Cafe La Colina which looked nice from the outside. 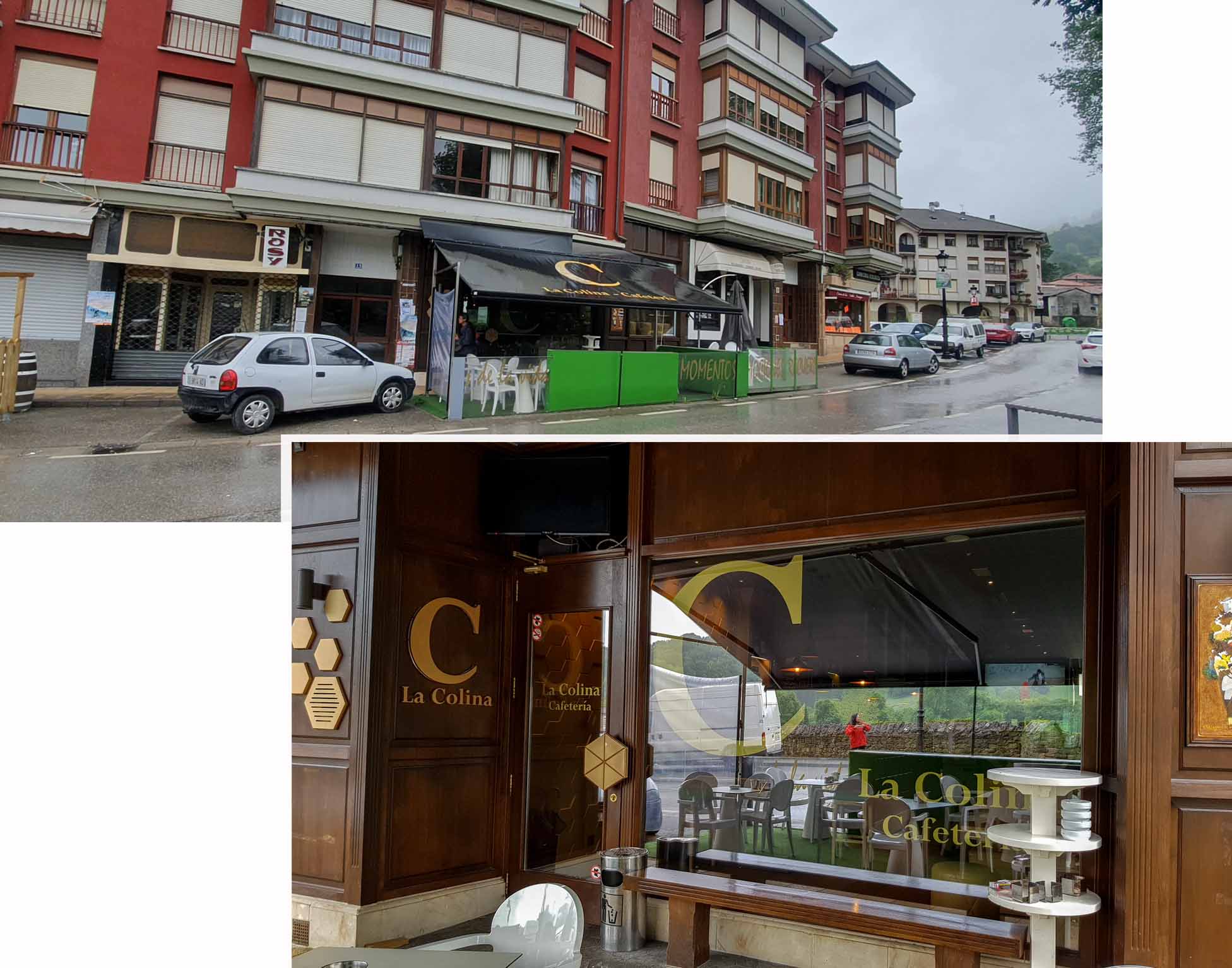 We chose a table on the upper deck that had a clear view of the bar below. It was fun drinking cafe latte, eating crossiant and cake and seeing the locals interacting with each other. The coffee break costed €4.70. Luckily this cafe did not close for Siesta so we needed not rush off. Before we left Selaya-Llbera town we went into a supermarket a few doors away to pick up some grocery (tuna, tomato puree, cherry etc). 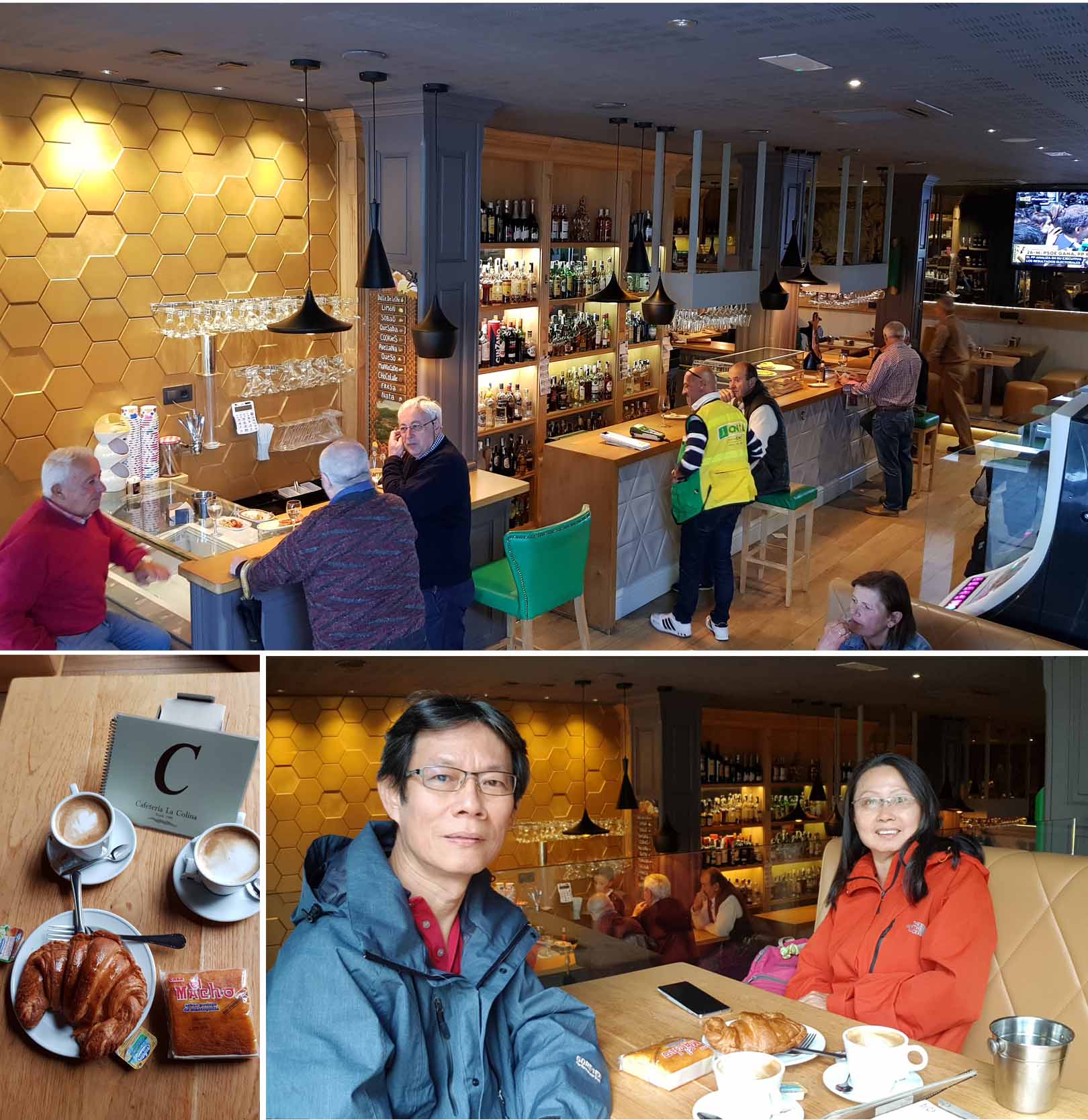 From Selaya  town to Vega de Pas town where our guesthouse was located was about 15 km. This 15 km involved some winding up a hill and then down on the other side and enroute there were three miradors/viewpoints (based on google) with fantastic views of the valleys around. We could not find the first Mirador de La Braguia, we located the 2nd Mirador, Puerto de La Braguia and also the 3rd Mirador. Unfortunately there was nothing to see because all around us was heavy mist. We left the miradors behind and drove down hill to Vega de Pas. 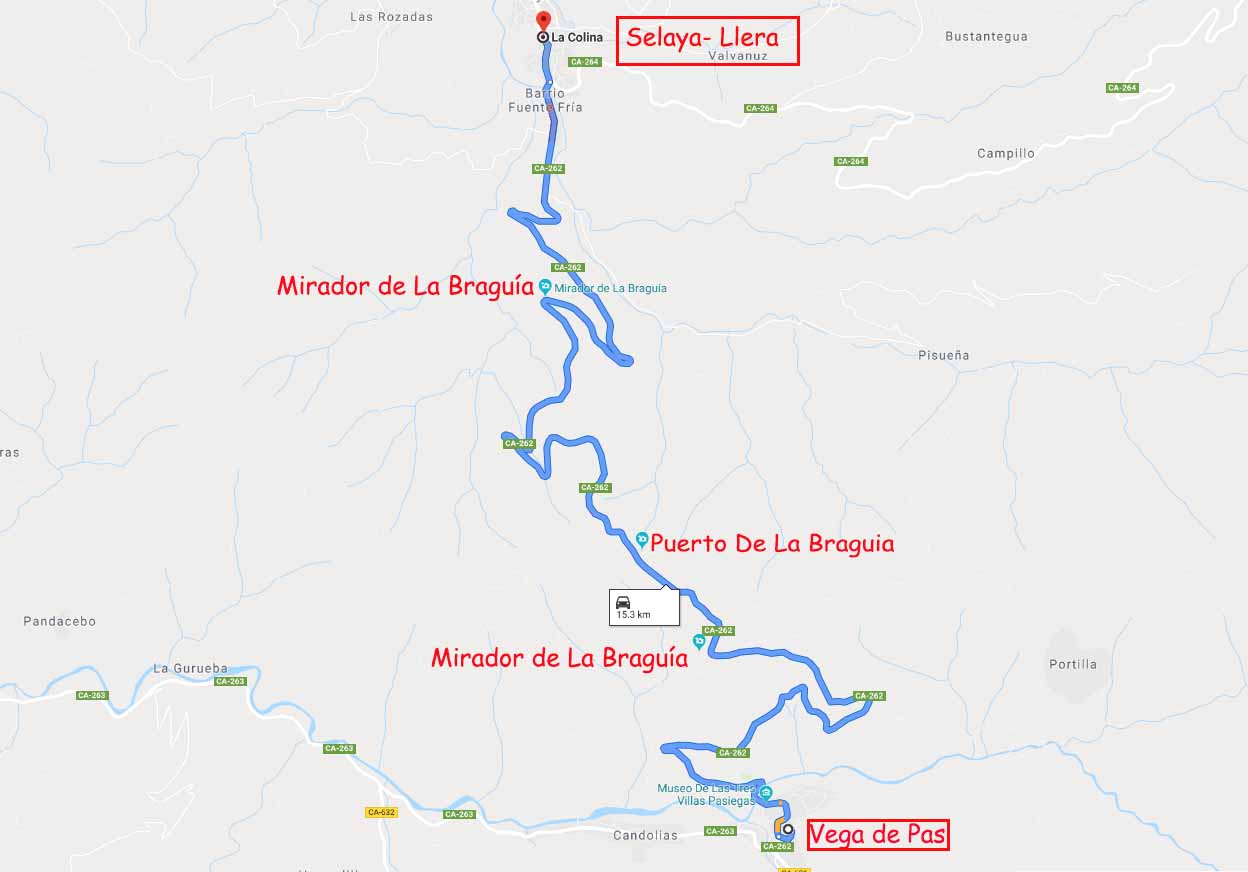 We reached our stay “Posada Casa don Guzman” a local guesthouse in Vega de Pas. We stopped directly outside the guesthouse and found the front door closed. There was a note on the glass panel with instruction on how to contact our host 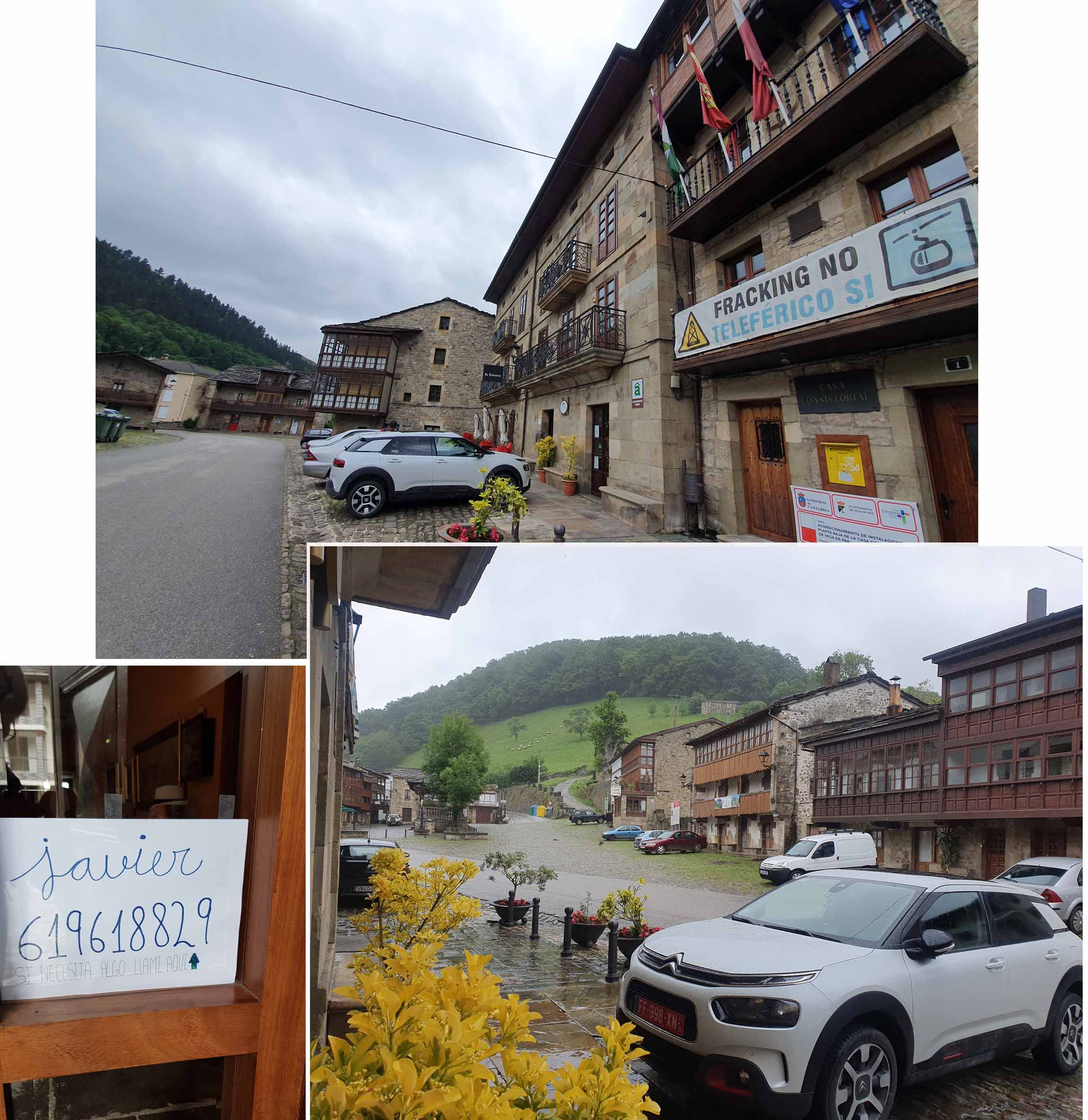 Vega de Pas was a very pretty and quiet town.  Unlike Selaya town, the buildings in this town looked more traditional. The only sign of lifes were the cars that were parked outside the buildings. We wondered if all the people were indoor. Probably since it was raining.

We had hoped to do some trekking at Valles Pasiegos but the two days of raining and heavy mist made it impossible for us to go trekking. On the second day at about 9.30 am we went back to the miradors on the hill between Vega de Pas and Selaya towns to check out the views. This time unlike the day before we were able to see “something”. 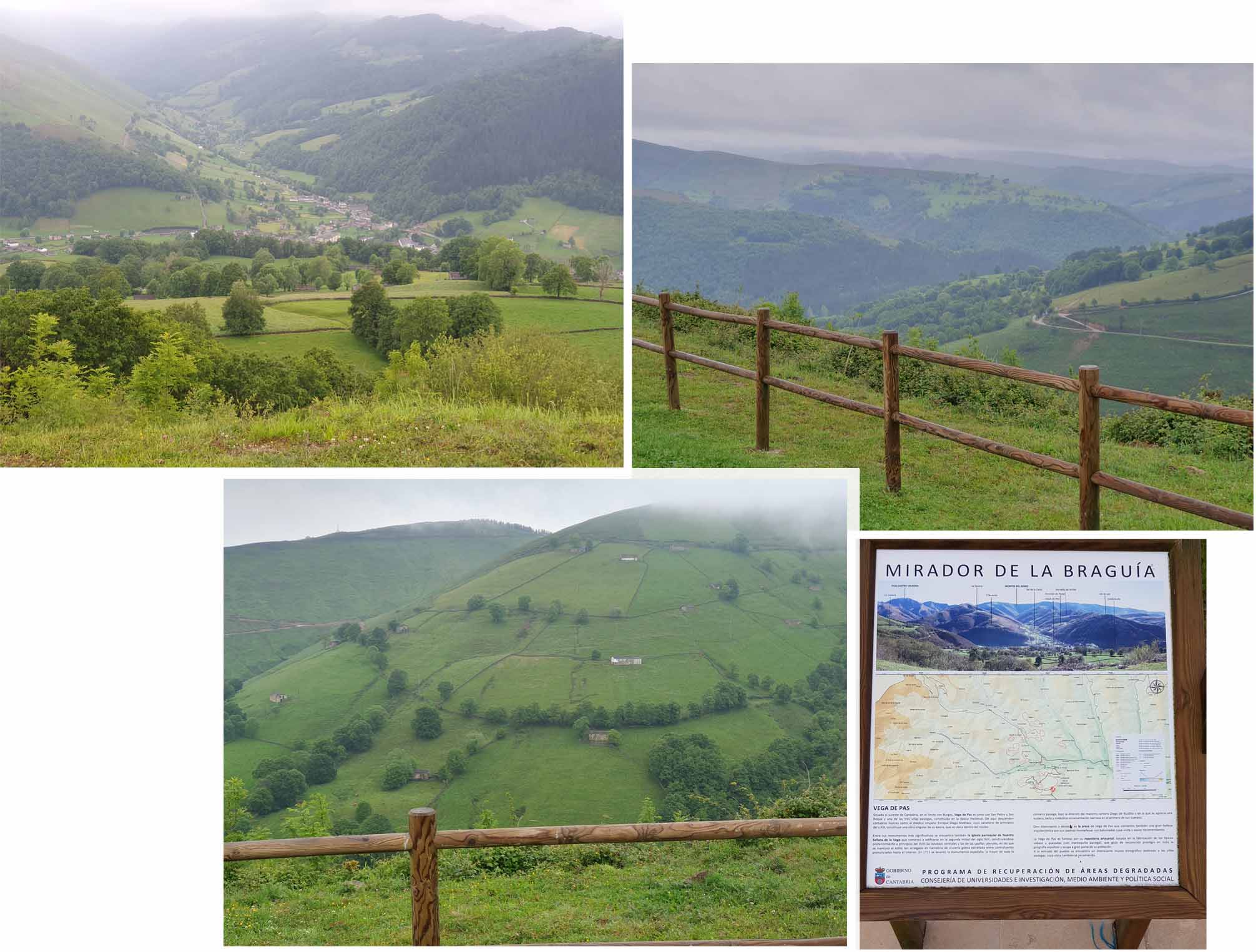 At 11 am we were back to the miradors again. We were in the town Selaya-Llera town when we saw the mist lifted above the hill so we drove back to the Marador de la Braguia and was rewarded with a lovely view of the valley. 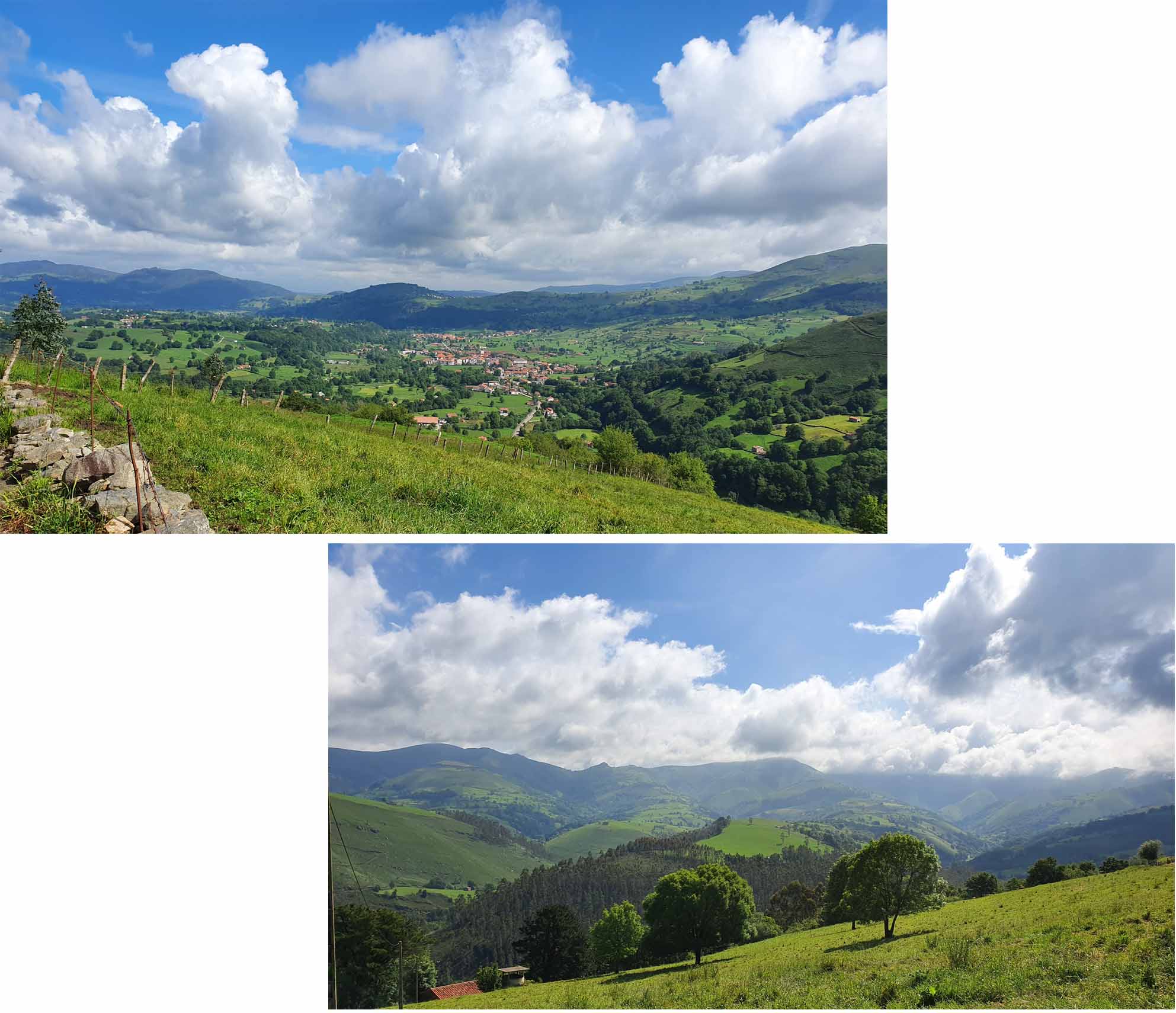 Wow! What a different the sun could make to the sceneries. The “greeness” of the countryside was accentuated. The blue and white sky contrasted beautifully with the lovely hills. The beautiful scenery did not lasted long, as soon the mist came back down again. We left the miradors and was back to Selaya town for lunch 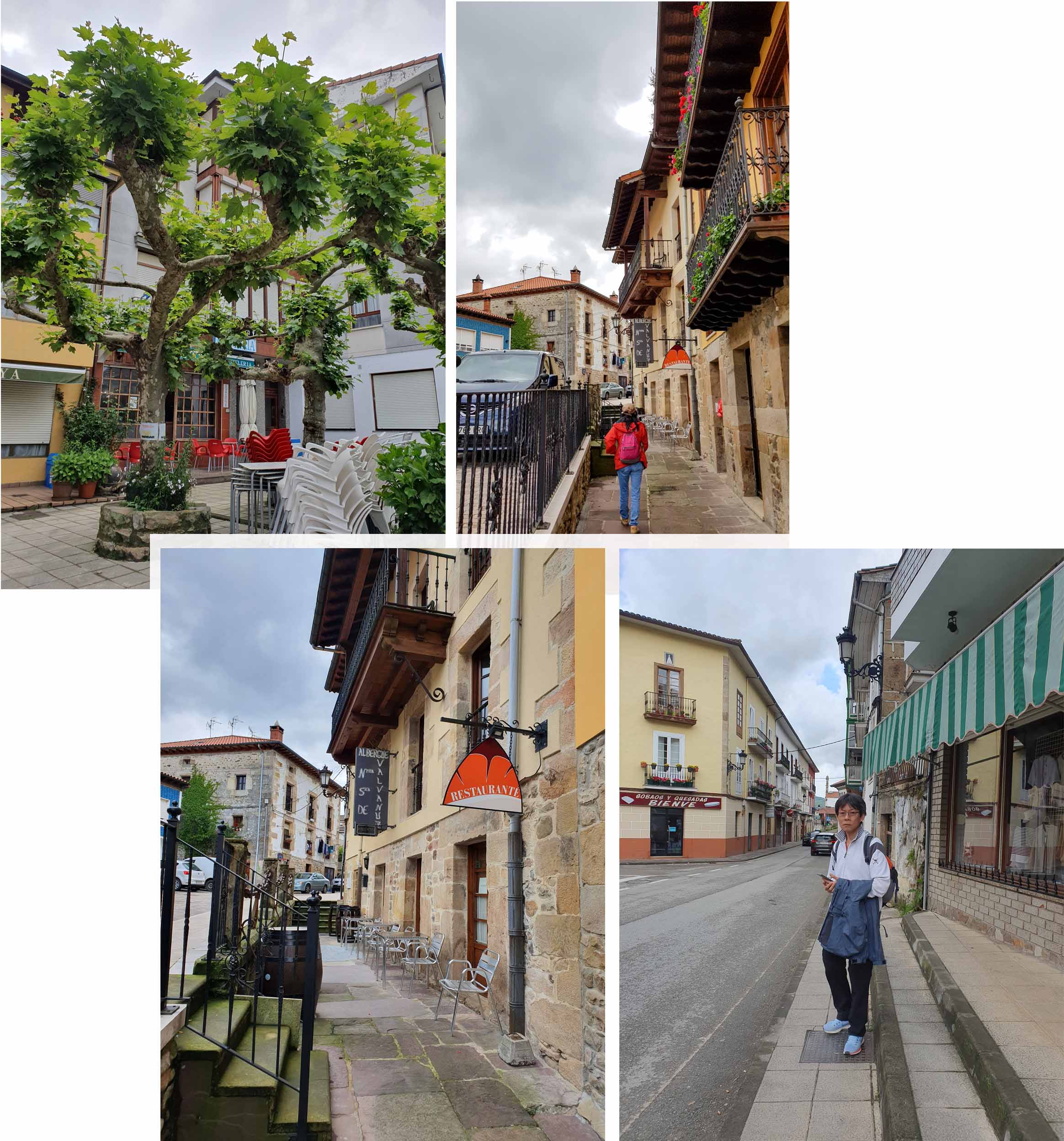 Selaya town was much larger than Vega de Pas, there were more cafes, restaurants and shops.  By about 12 noon and we had already explored the length and breadth of the town so the only task left to do was to go and get lunch. From google map we picked up a restaurant that had great reviews but when we reached the restaurant we were told that itnwould only open at 1 pm so we had to come back one hour later. But we had already explored the town! What else could we do in that one hour? We requested if we could order coffee while we waited but was told tht the restaurant did not serve coffee till lunch. Oh dear…..we walked back to the town center, to our car. It started drizzling again maybe we should wait in our car.

The we found a restaurant, Ristaurante EK Horno, that also had a cafe front. 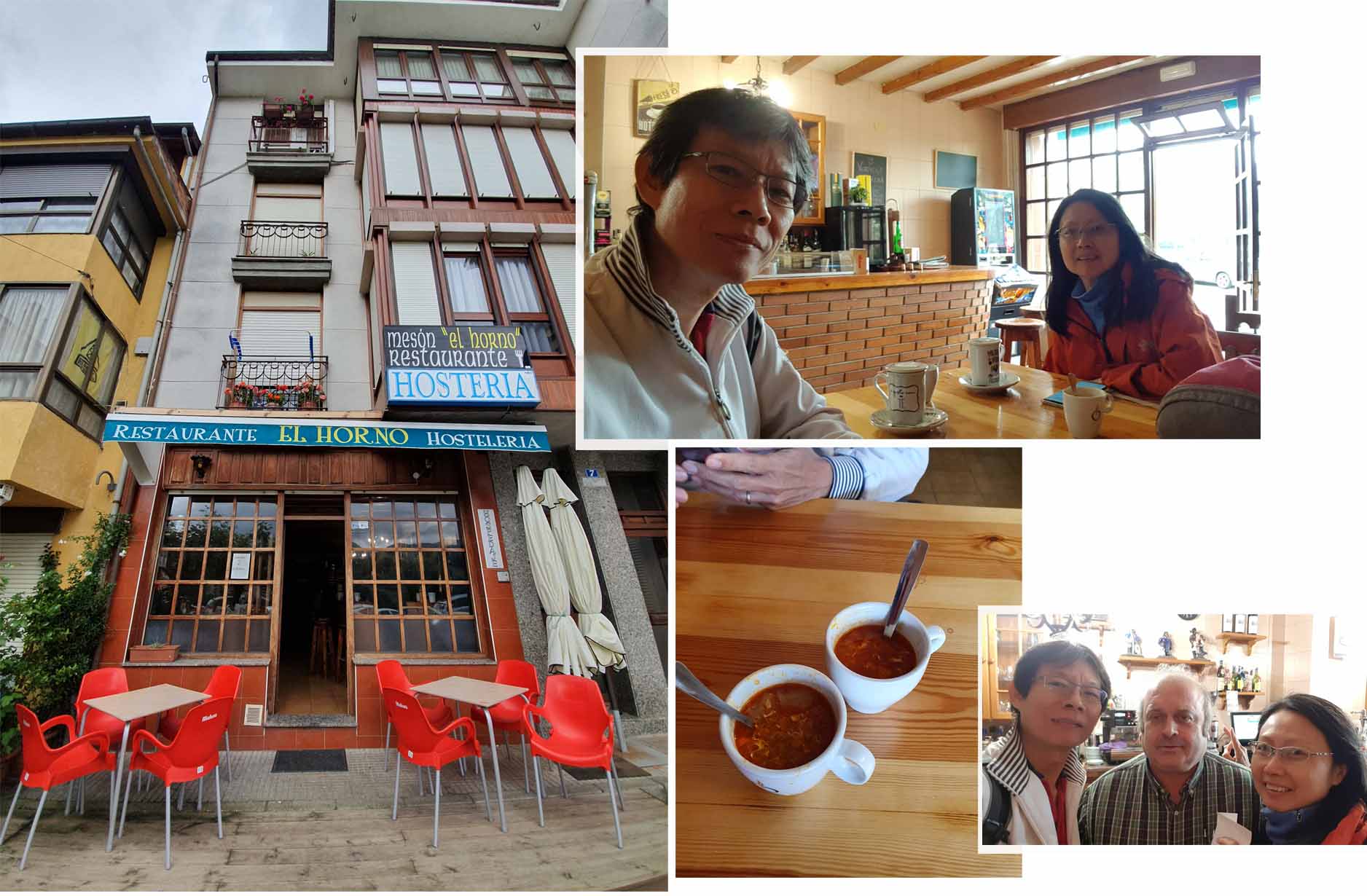 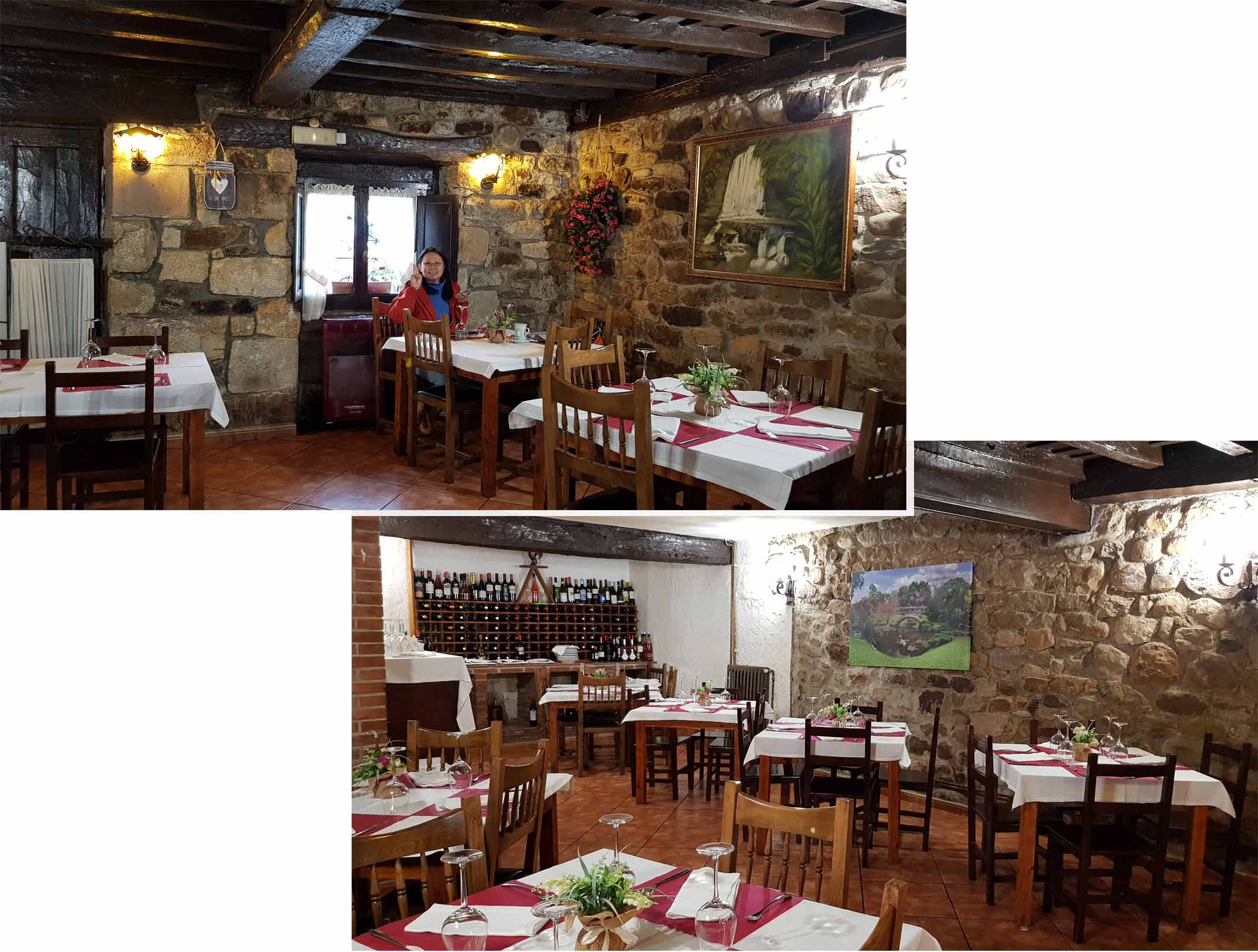 From the front at the cafe we would not have imagine that there was such a pretty restaurant behind. We ordered our lunch after a much “difficult” discussion with our host as his English was very limited. We thought we ordered two separate sets but when they were served both Yat Thong and I had exactly the same set. Oops! And I thought we were communicating well. After each serving our host would come back to check if we liked the food so everytime we gave him a “thumb up sign”. 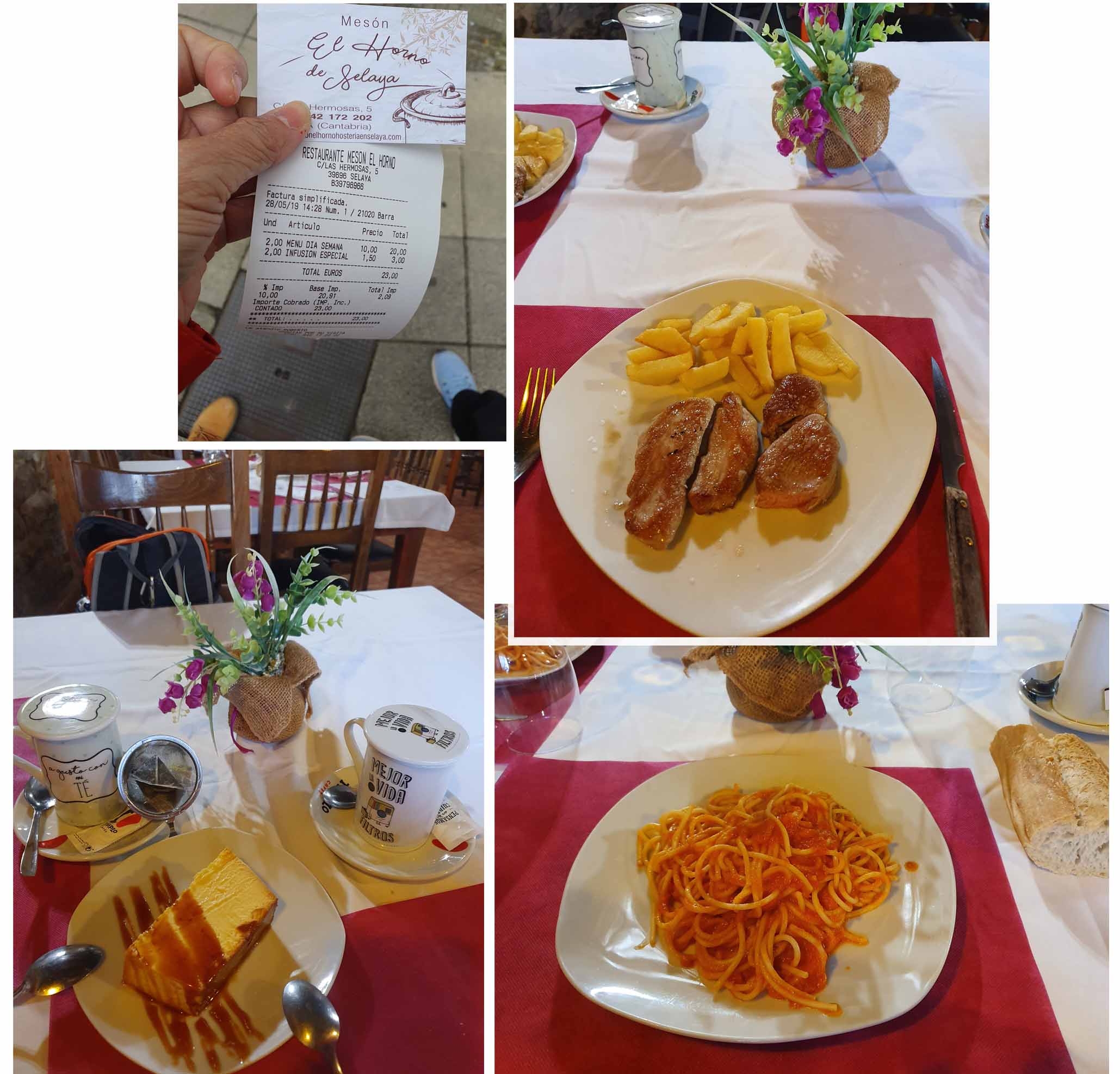 Our lunch at El Horno Restaurant

After our meal we decided to order dessert. Again we went through the usual difficulties finding out what sorts of dessert were available. He said many things that we did not understand so finally we told him we would like one cheesecake. The cheesecake was lovely.

The bill came up to €23 for two lunch sets (€10 each) and two tea (€1.50). The was no itemised charge of the cheesecake. Apparently the dessert was part of the set. Too bad we could not go back in to claim the second cheesecake and packed it for supper tonight! 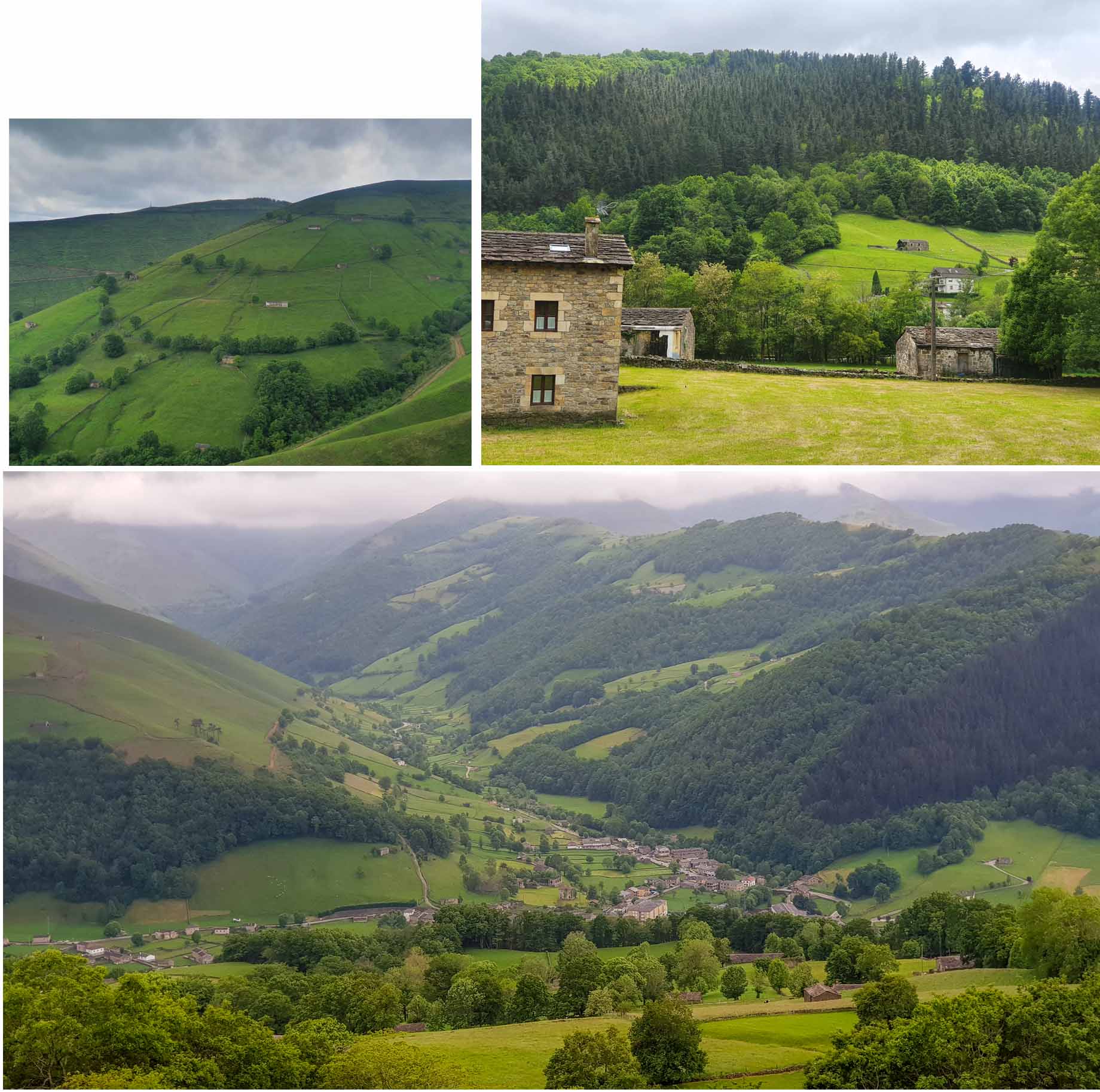 Posada Casa don Guzman was a BnB that we reserved on booking.com it was a three storey traditional building. Our host was out when we arrived so we contacted him and it took him about 5 minutes to come over from “somewhere”. Internally the guesthouse was very beautifully furnished. It had a common sitting (shared) and a lovely dining room. 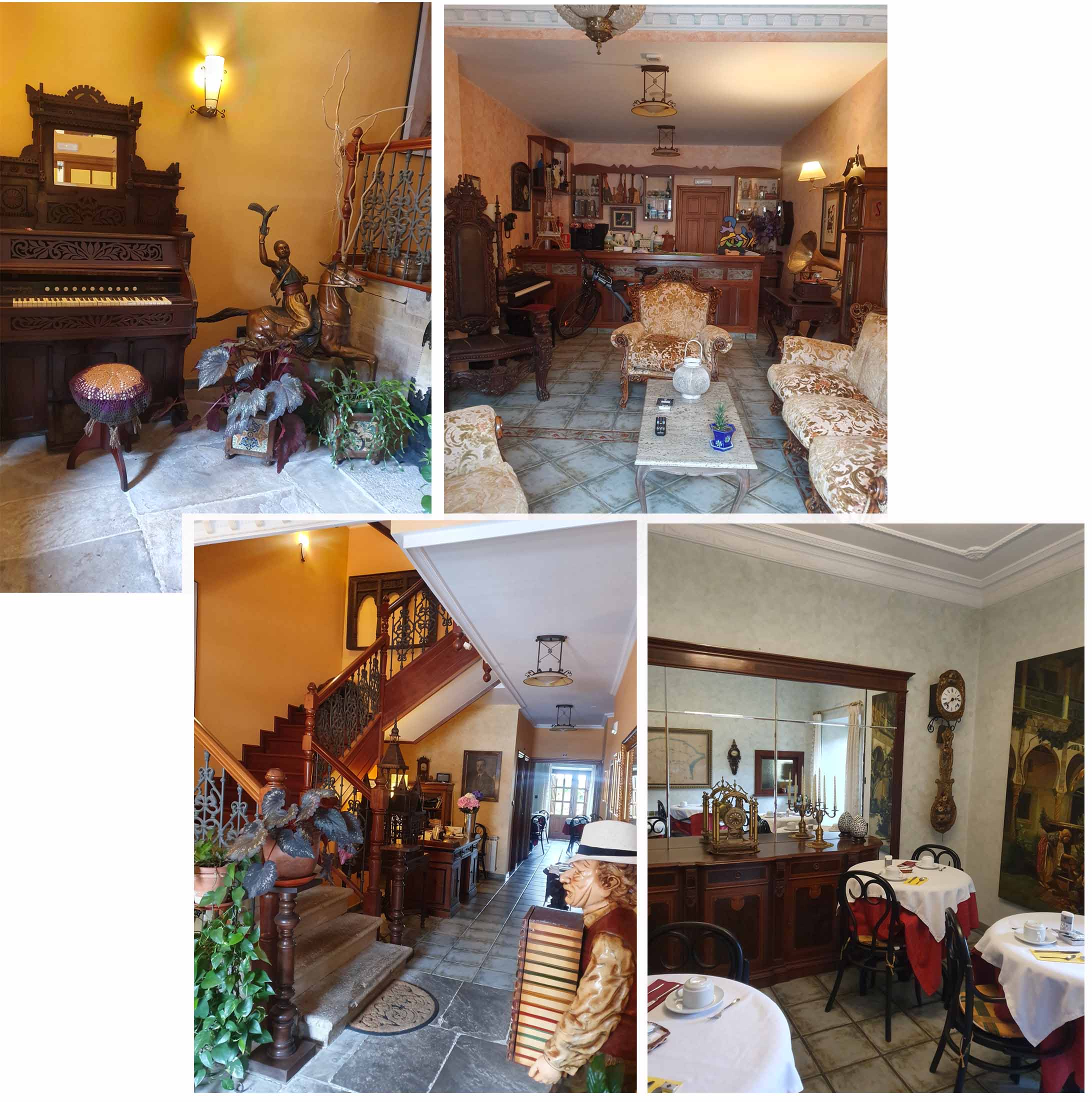 Our room was on the 2nd level and just when we thought we would need at least two trips to bring up our bags when we were told by our host that in the guesthouse there was an elevator. What a nice surprise! Our host showed us to our room which was at the back of the house. It was a lovely room with an ensuite bathroom and the place and was spotlessly clean. 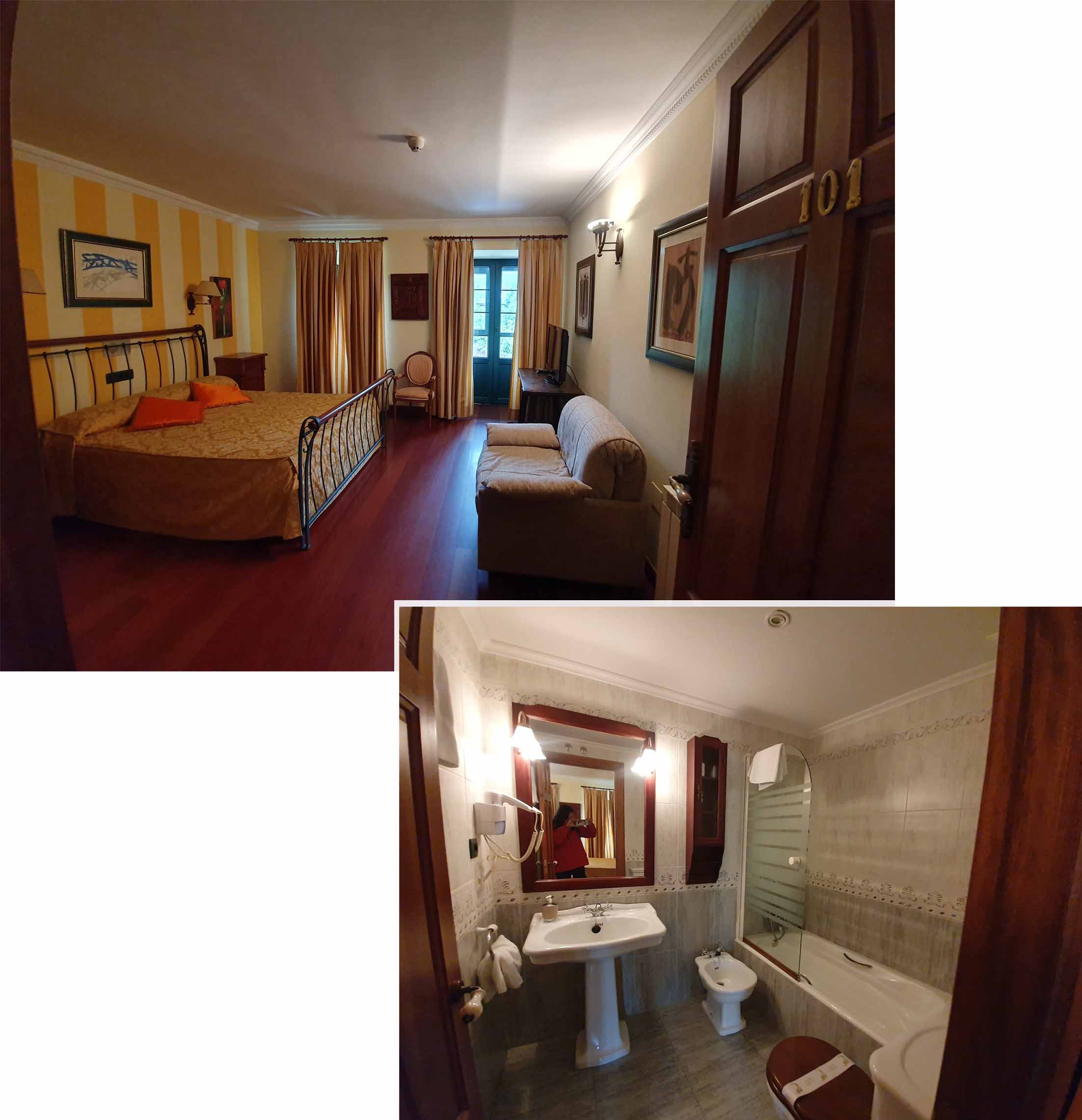 Our room had a balcony which was all “glassed-up” and the view was lovely especially when the rain stopped. Everytime when we were back in our room we would be spending time out on the balcony. 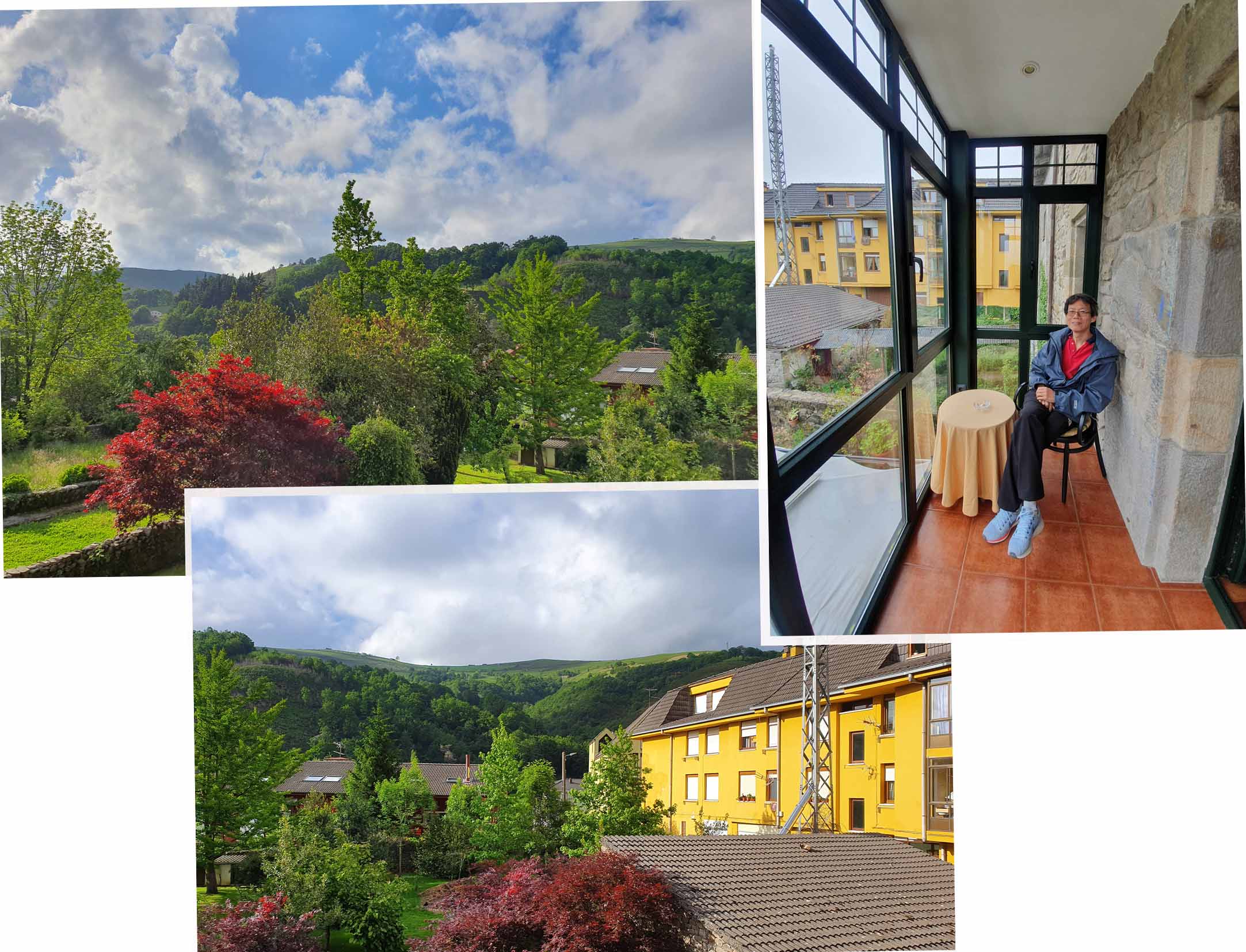 During our stay at the Guesthouse we were the only guests at the place. Our host’s mother lived on the third level but for our entire stay there we did not see her or hear of any movement on the third level. Our host was not in the guesthouse most of the time as he was not expecting other guests after us. So we were left very much on our own.

The wifi at the guesthouse was only working when we were on the ground leve. Our room was on the 2nd level and there was no wifi signal at all. We had no choice but to  “parked” ourselves and our laptops in the common lounge on the ground level for a “long long” time just to have internet access.

Breakfast was really pathetic, we were given coffee and two slices of bread per person and some small packets of jam. We did not like jam and had to request for butter. During the first breakfast we had two apples but during the second breakfast there was no fruit at all.

It was lucky that we had bought two cans of tuna and a bottle of mayonnaise with us so we used them to supplement the “pitiful” breakfast offering of the guesthouse. 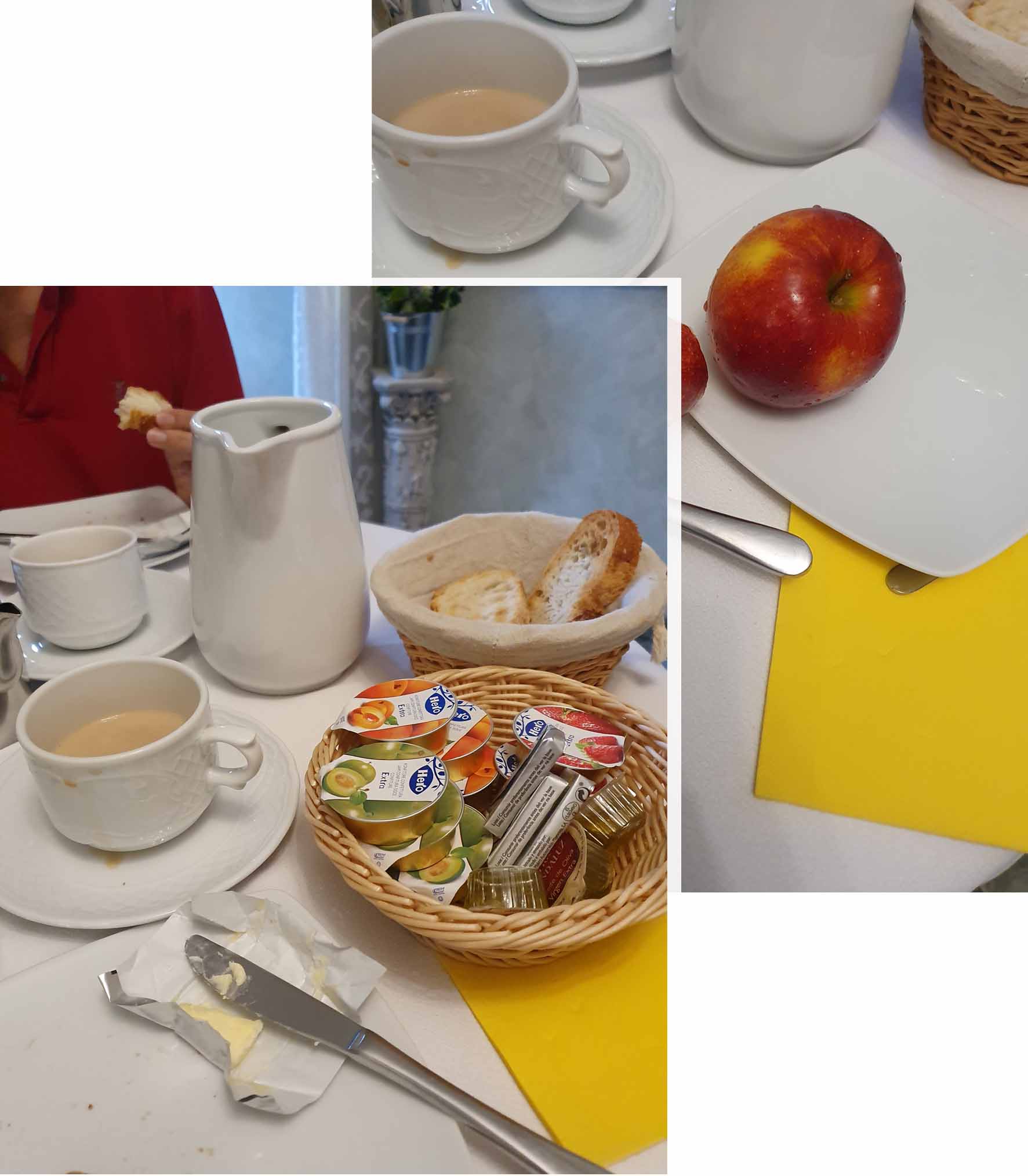