We visited Tower of Hercules and Cascada do Ezaro today. These two sightseeing destinations provided convenient stops as we moved from Spain to Portugal in a couple of days. Our destination in Portugal was Peneda-Gerês National Park and getting there directly from Taramundi would need at least three and a half hours. This journey would be too long and boring without any meaningful sightseeing destinations. So we picked a longer route which passed Tower of Hercules and Cascade do Ezaro today and Roman Bridge and Granaries Soajo before reaching Peneda-Gerês National Park tomorrow. 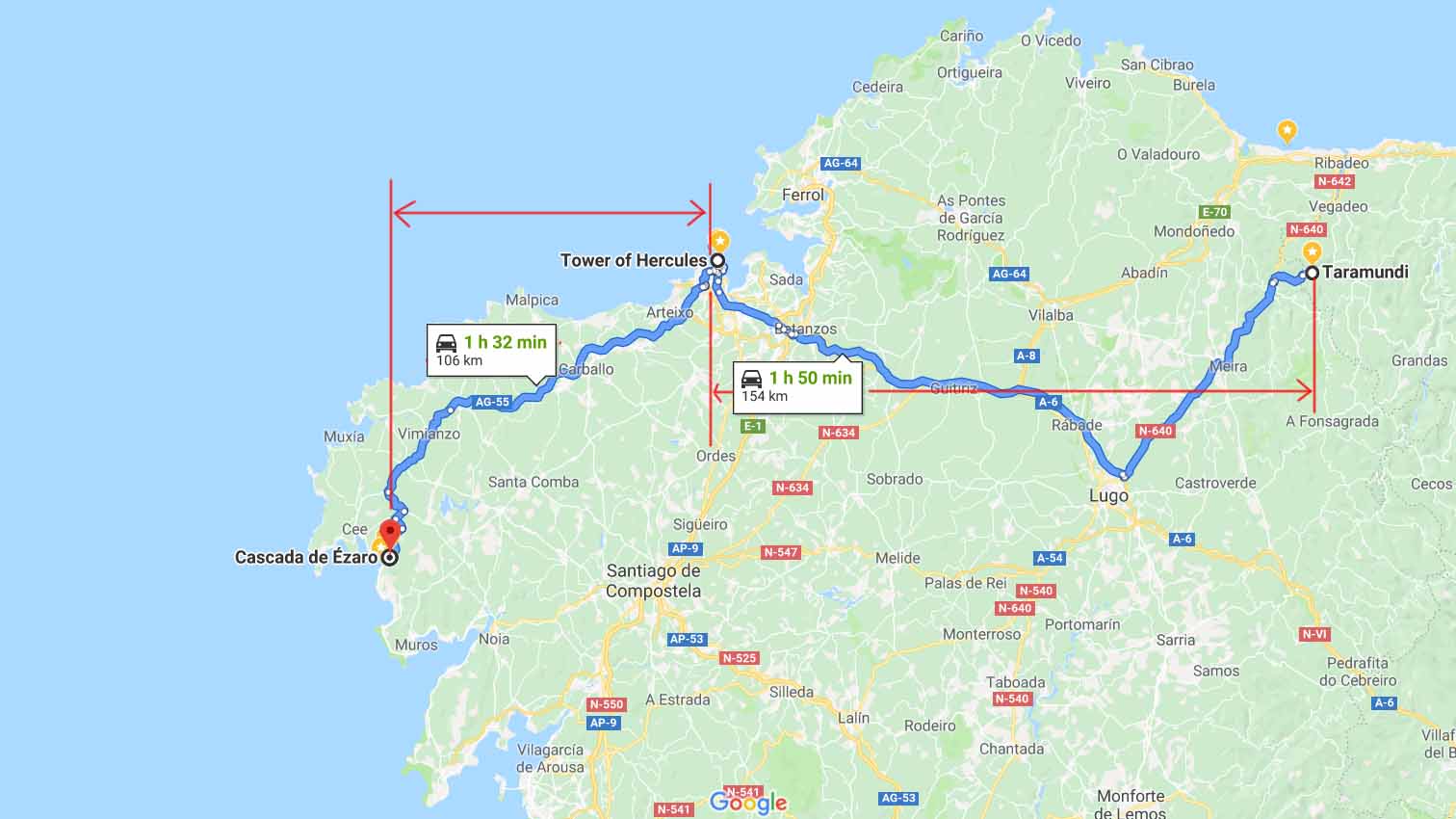 From Taramundi we drove for about 1.75 hour to reach the town of Coruna. Coruna looked modern, it was a city and a port.  There was a huge carpark near the Tower of Hercules and it was free of charge. From the carpark it was a short walk to the tower. 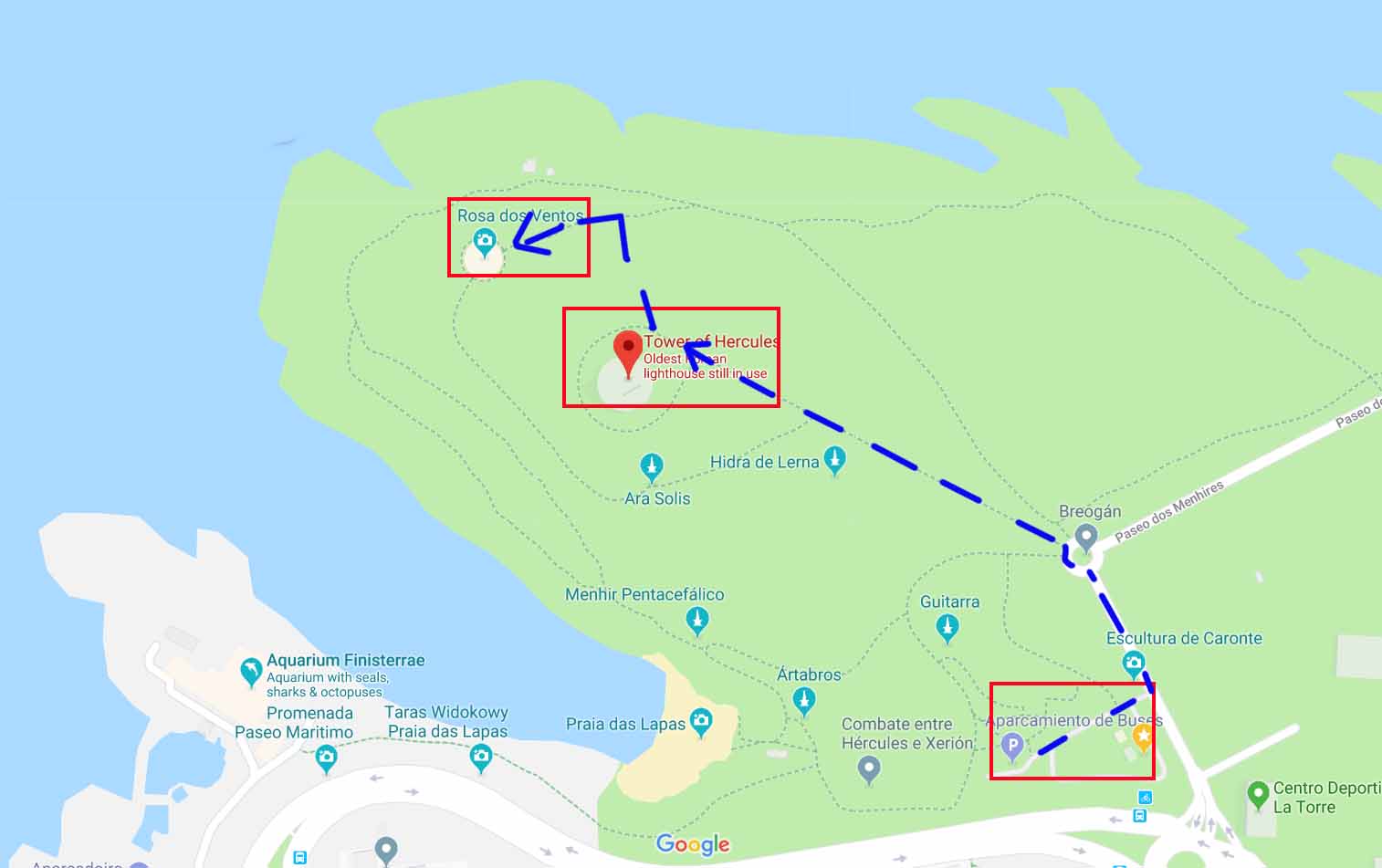 Map near Tower of Hercules

The weather was not too good, there was a slight drizzle so we put on our wind breaker/cum rain jacket and before walking to the tower. The tower was an ancient Roman lighthouse. It was 55 metre tall and looked over the North Atlantic coast of Spain. It was constructed in the 2nd century and renovated in 1791. Today it was oldest lighthouse in use.The Tower of Hercules was considered a National Monument of Spain and had been a UNESCO World Heritage Site since Jun 2009. 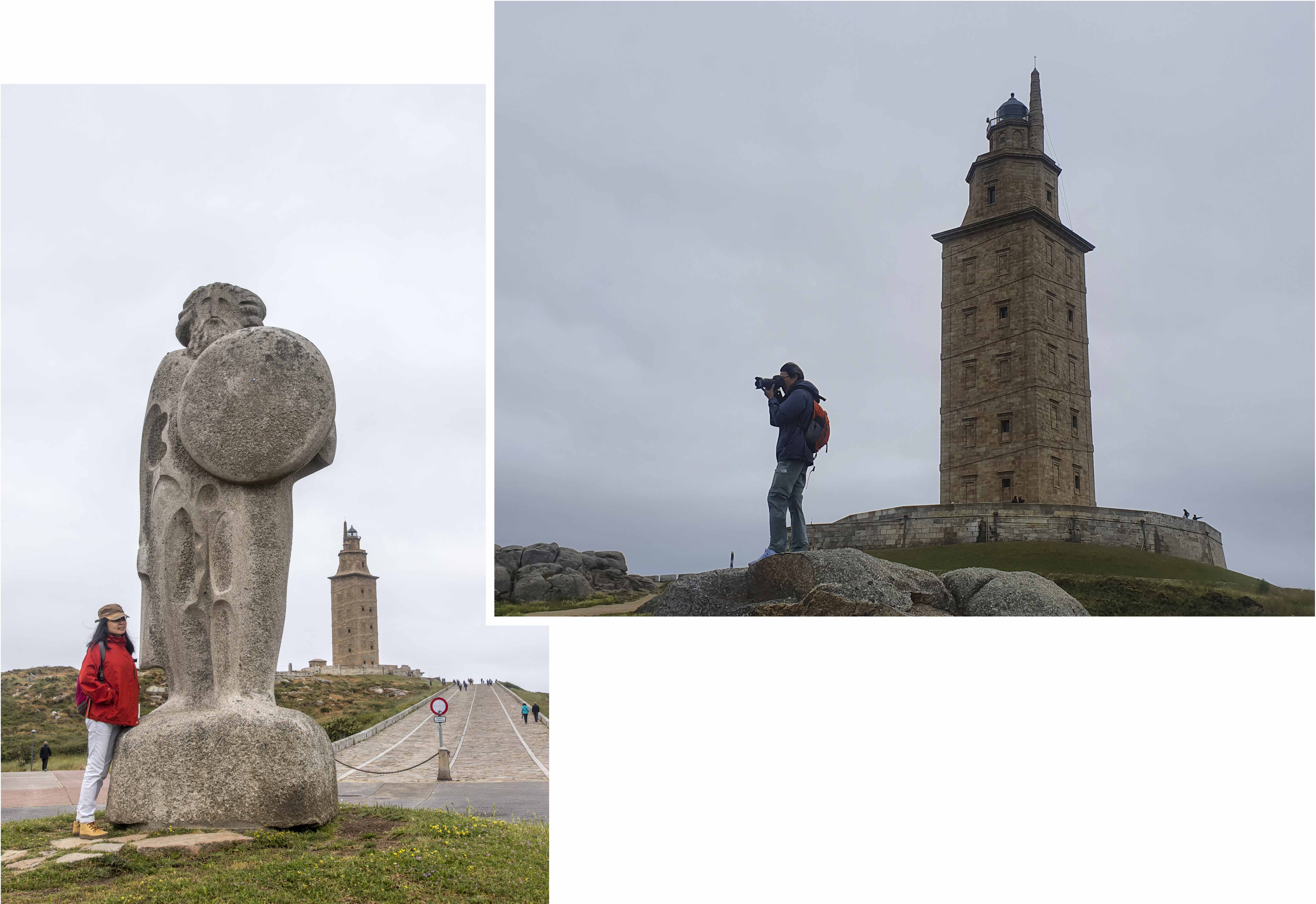 Tower of Hercules and Breogan

Around the tower was a park and there were several interesting sculpture exhibits displayed about. A short walk from the carpark brought us  to a circle with a “ancient” looking statue standing in the center of it. This statue was Breogan, a character in medieval Christian history of Ireland. He was supposedly the son of Brath an ancestor of Gaels who was a descendant of Adam through the sons of Noah and went to Ireland. 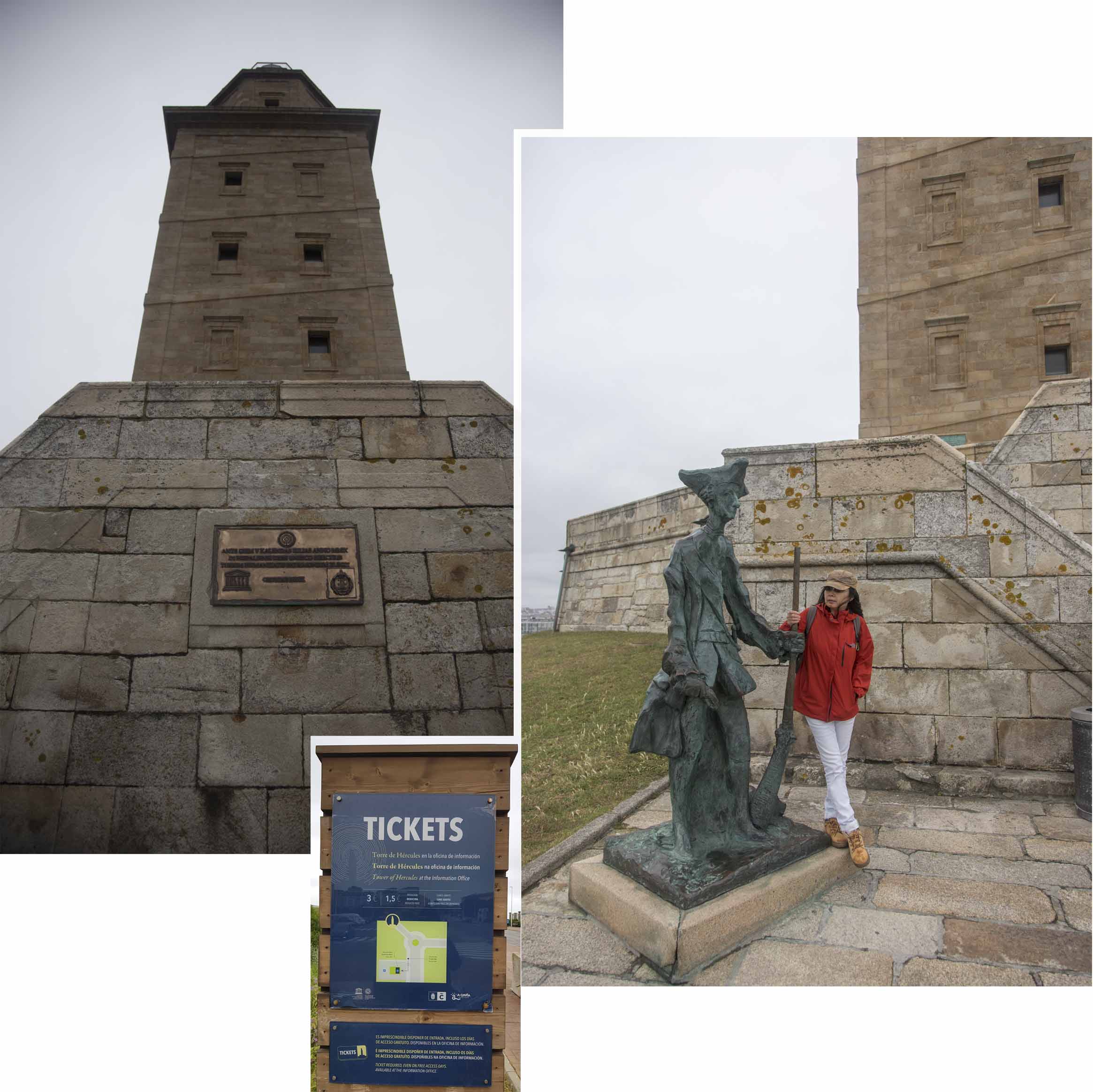 Tower of Hercules up close 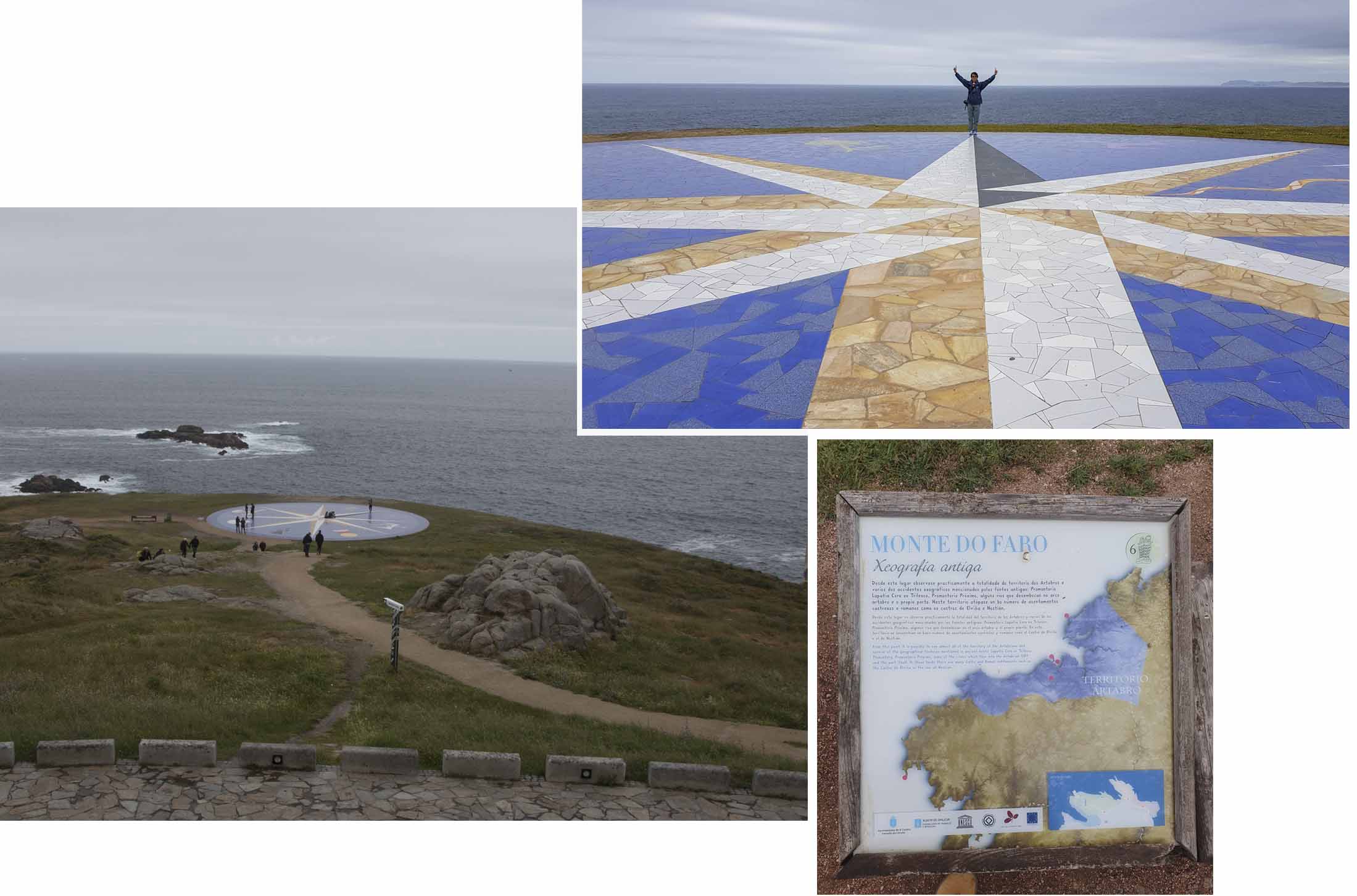 We would love to have a coffee break in Coruna but did not have an opportunity. When we found a cafe there was no roadside parking and when we found a good parking spot it was too far from the cafe. Since we still had about an hour and a half to go before reaching our destination we delayed the break till midway later.

About an hour later we stopped at a town called Vimianzo and found a nice looking cafe “A Rua Cafe”. We ordered cafe lattes (€1.10 per cup)  and some pastries to go along. Too bad there no other customer but us at the cafe. We would love some locals’ “noises”. Anyway it was a lovely break and after one hour we felt rejuvenated and left for “O Pindo” where our stay for the night was located. 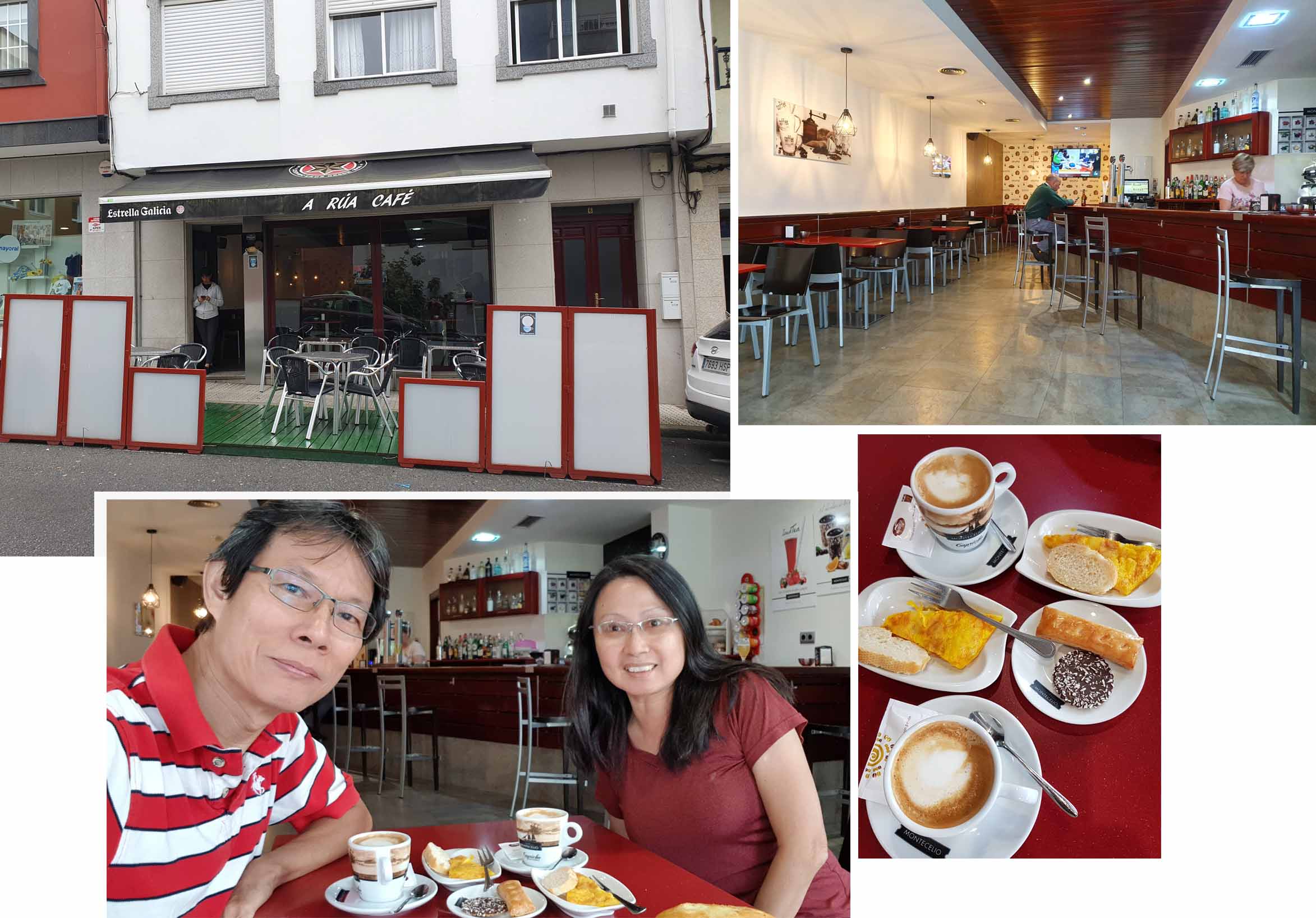 O Pindo was a Galician seaside town. We chose to stay a night in this town as it was very near to Cascada do  Ezaro (Ezaro Waterfalls). We did not expect this seaside town to be so pretty.  The town was just a stretch of land beside the beach and the mountain. The main road ran through the town dividing the town houses stretch and the beach. 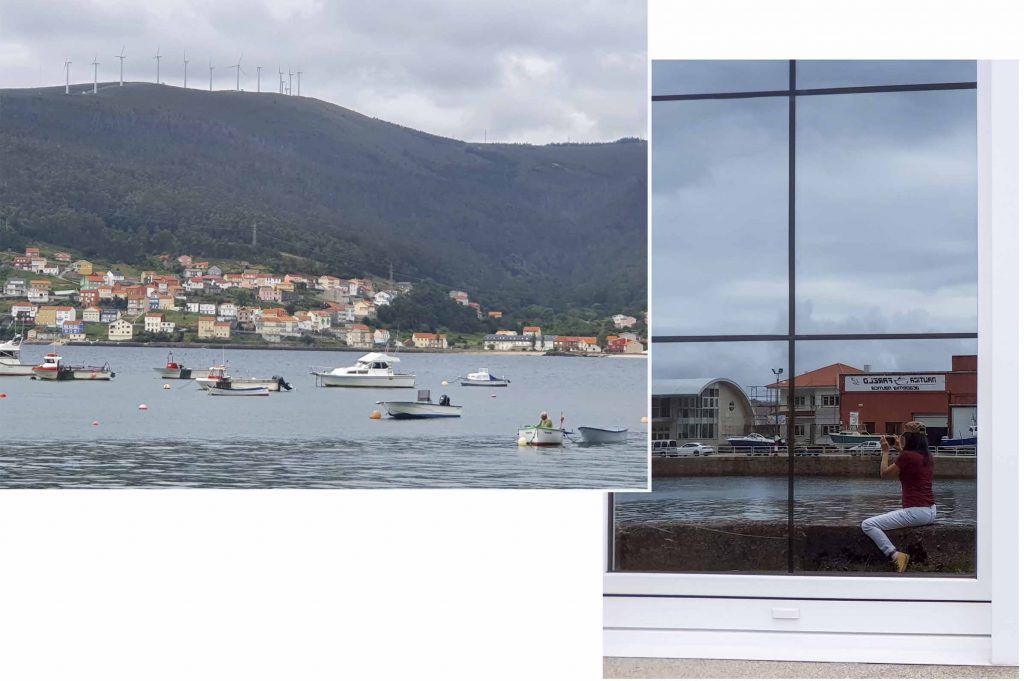 The view of the bay was especially lovely at sun set. From the windows of our room, which was on the third level of our stay we had a fantastic view of the bay. Sunset at 9 pm was magnificent.  I was satisfied staying in our room to view the sunset.  Yat Thong preferred to be at the beach to view the setting sun. So we went for a walk by the beach while I stayed by the windows. 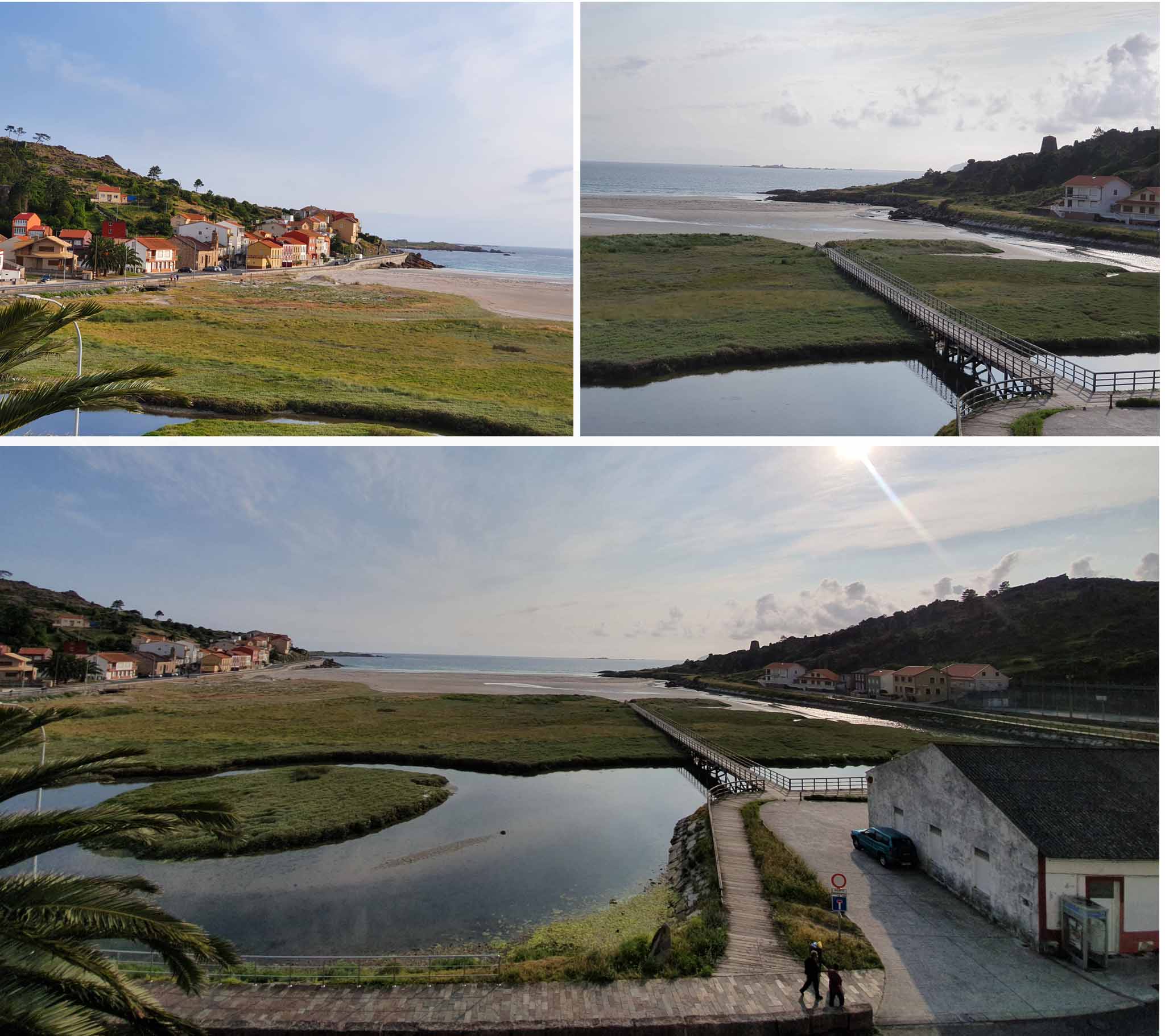 Sunset at O Pindo from the window of our Stay 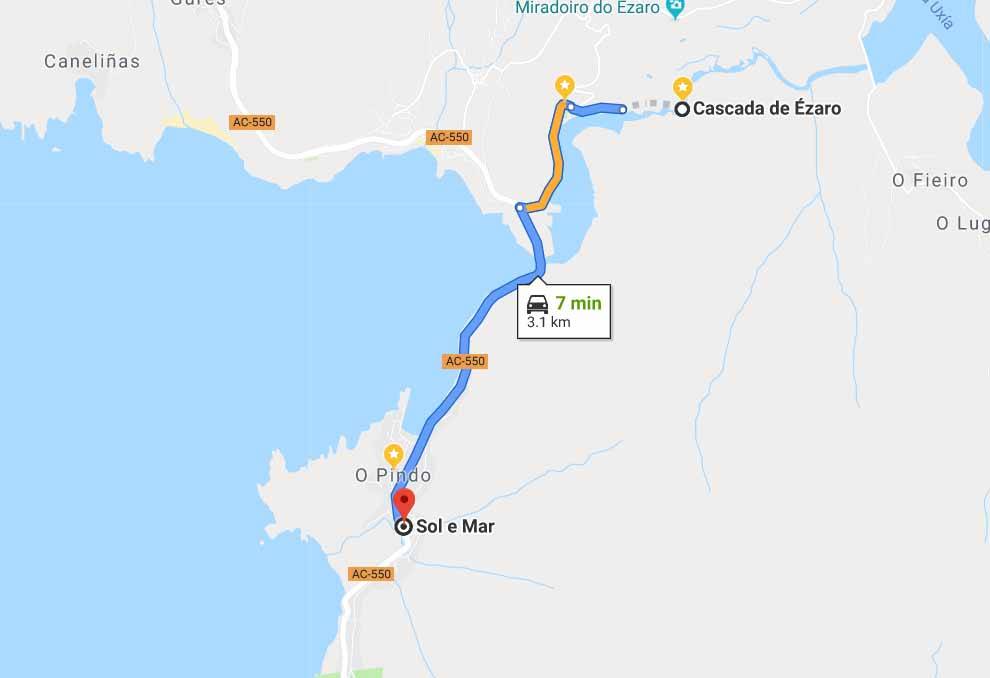 Route from O Pindo to Cascada do Ezaro

The downstream of Casacada do Ezaro was a lake with a dockside where many boats were moored. From the habour we could see the side view of the falls coming down a the slope. We parked our car at the car park beside the pier and came down to have a walk. There were not many people about. Further towards the direction of the waterfalls was a tourist information center, it was already close as it was about 6 pm. 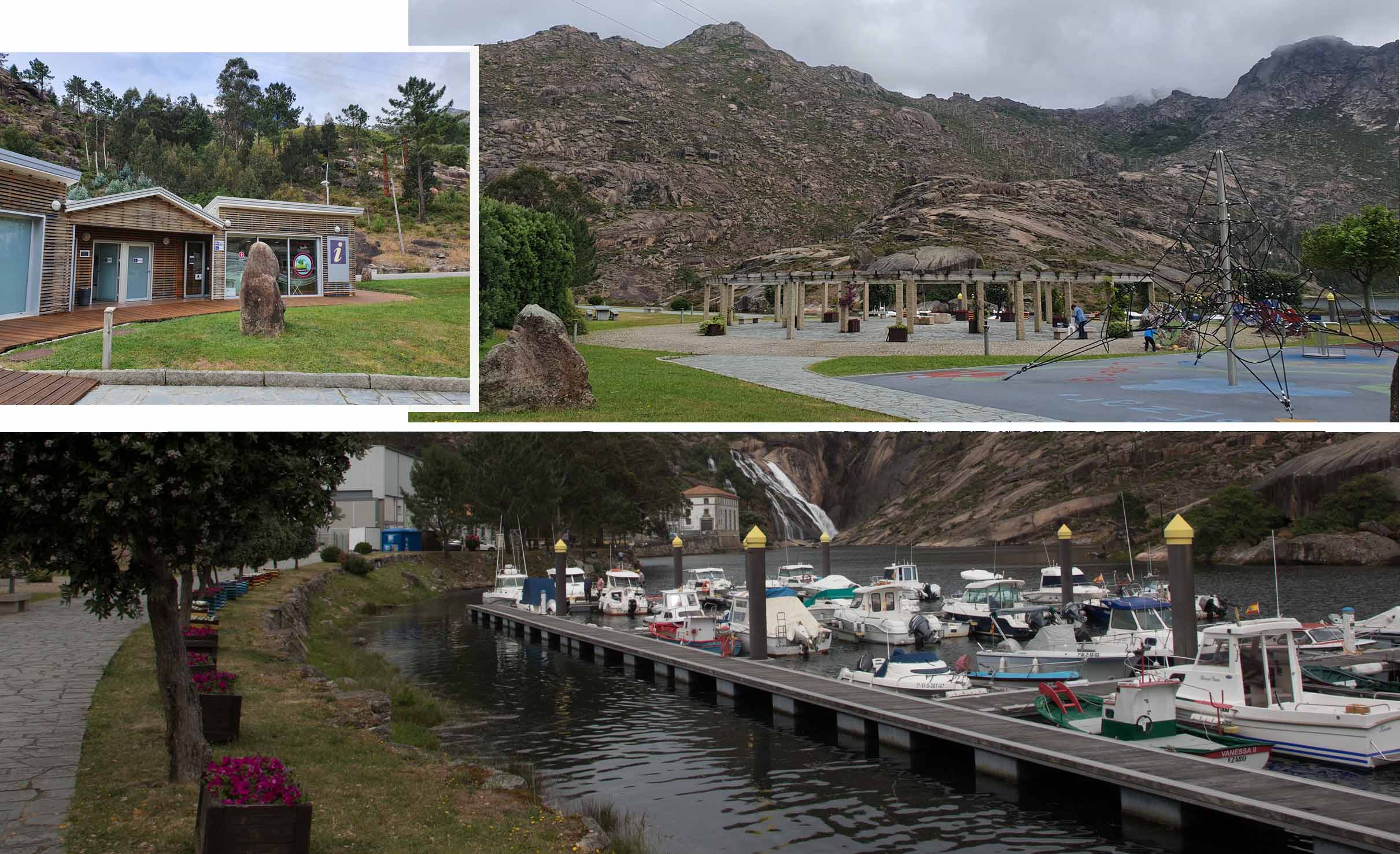 Dock side near Cascade de Ézaro

There was a path that led to the base of Casada do Ezaro, unfortunately the path was under renovation. We came to a barricade with with some heavy equipment parked behind the barricade. Beyond the barricade the walking path was a mess, it was all dug up and impossible to walk across. We chatted with a workman to find if there was an alternate path to get over the “dug up” area to continue our walk to the base of Casada do Ezaro. Unfortunately his answer was “NONE”. We left filling disappointed.

Walking path leading to base Cascade do Ezaro

It was a shame that we could not view the falls from up close. Casada do Ezaro was a powerful waterfalls and was considered one of the most beautiful waterfalls in Spain. It was 155 metre high and was a fan shaped falls. 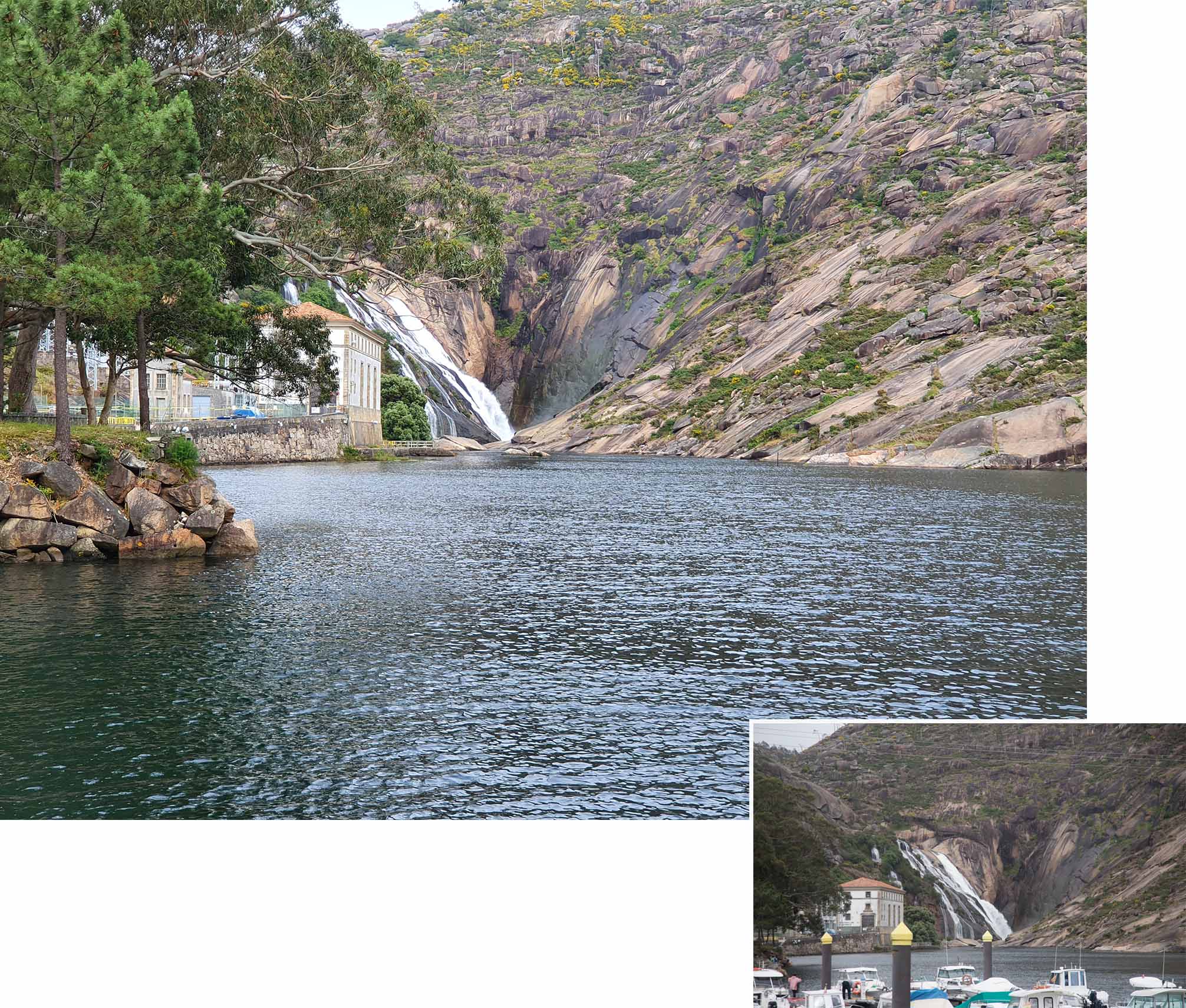 Dinner at the beach

We had our dinner at “A Cascade do Ezaro” a cafe that had the same name as the waterfalls. This restaurant was located at the beach front near to O Pindo. We were eating out as our stay did not provide cooking facilities. There was not many restaurants so we chose a restaurants with a beach front view. 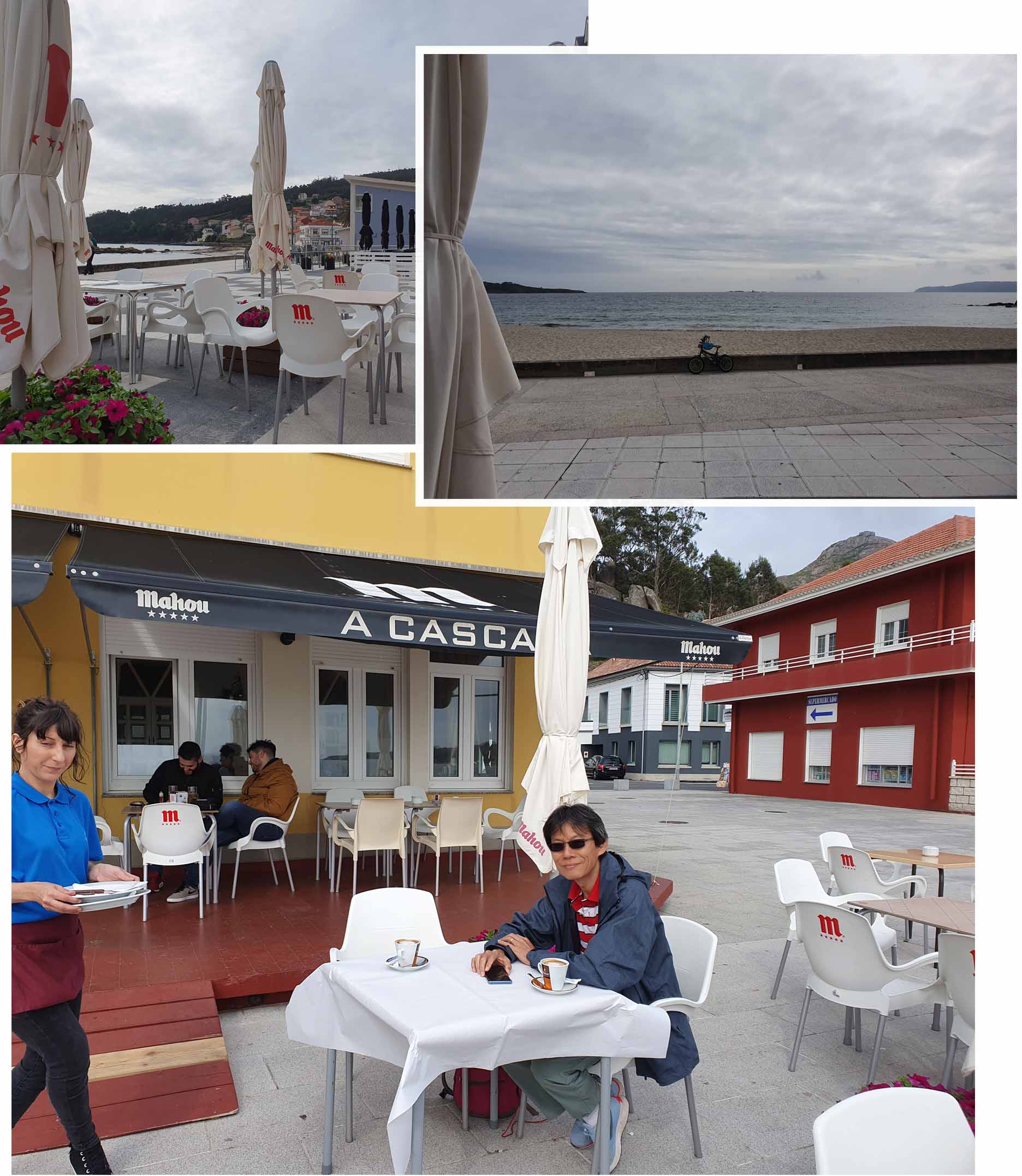 Dinner at “Cascade do Ezaro” restaurant

We ordered mix meat on skewers and beef steak. Both meals came with a lot of fries. We should have changed the fries to vegetables! Too late. The beef was pale in color and tasted very light without the standard beef taste. This was the second time we tasted Spanish beef and both times the beef was rather light in color and soft to bite even though it was well done.  Our dinner came up to less than €16 not to expensive. 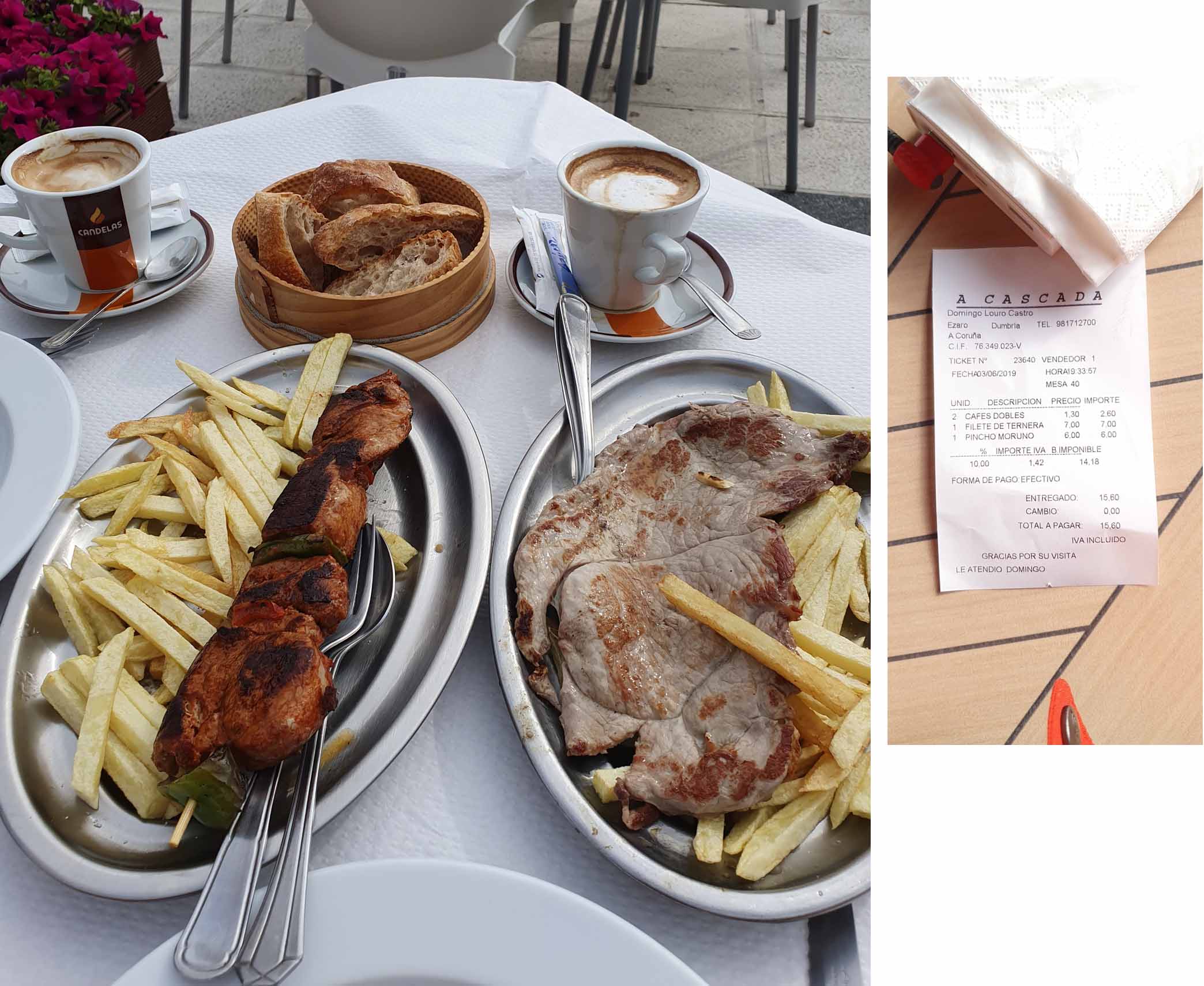 Our stay at O Pindo was Pensión Sol y Mar which we booked on booking.com. We booked a double room at this Pension for several reasons: free street parking, breakfast, location, view etc.

Another main reason was that in one of the pictures of this place we saw a vibrant restaurant below the Pension so we thought that since the double room did not provide cooking facilities we could just pop into the restaurant for dinner. Unfortunately on arriving we found the restaurant was closed on Monday! 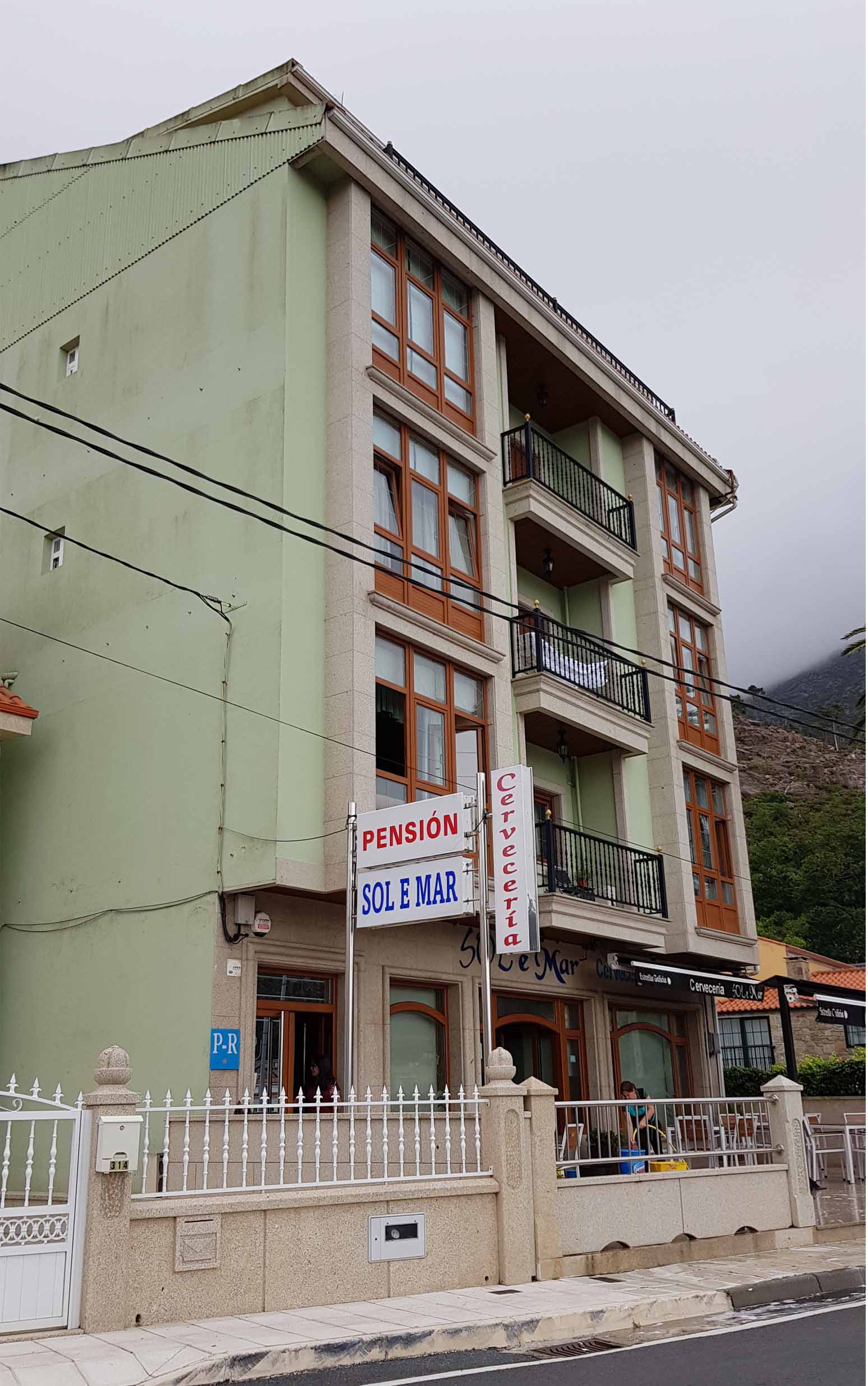 We parked our car by the side of the road where there were white lines lots and crossed the road to our “stay” just 100 metre away. Directly outside our “stay” there was no parking lots.

We were shown to a room that did not have a window that faced the beach, so we pulled out our booking to show to our host our expected room. Our host brought us to the third level and gave us the room that we had booked. This double room faced the beach/sea front and the view was good. Unfortunately this Pension had no elevator so it would be a long way up to lug up our bags, sigh! 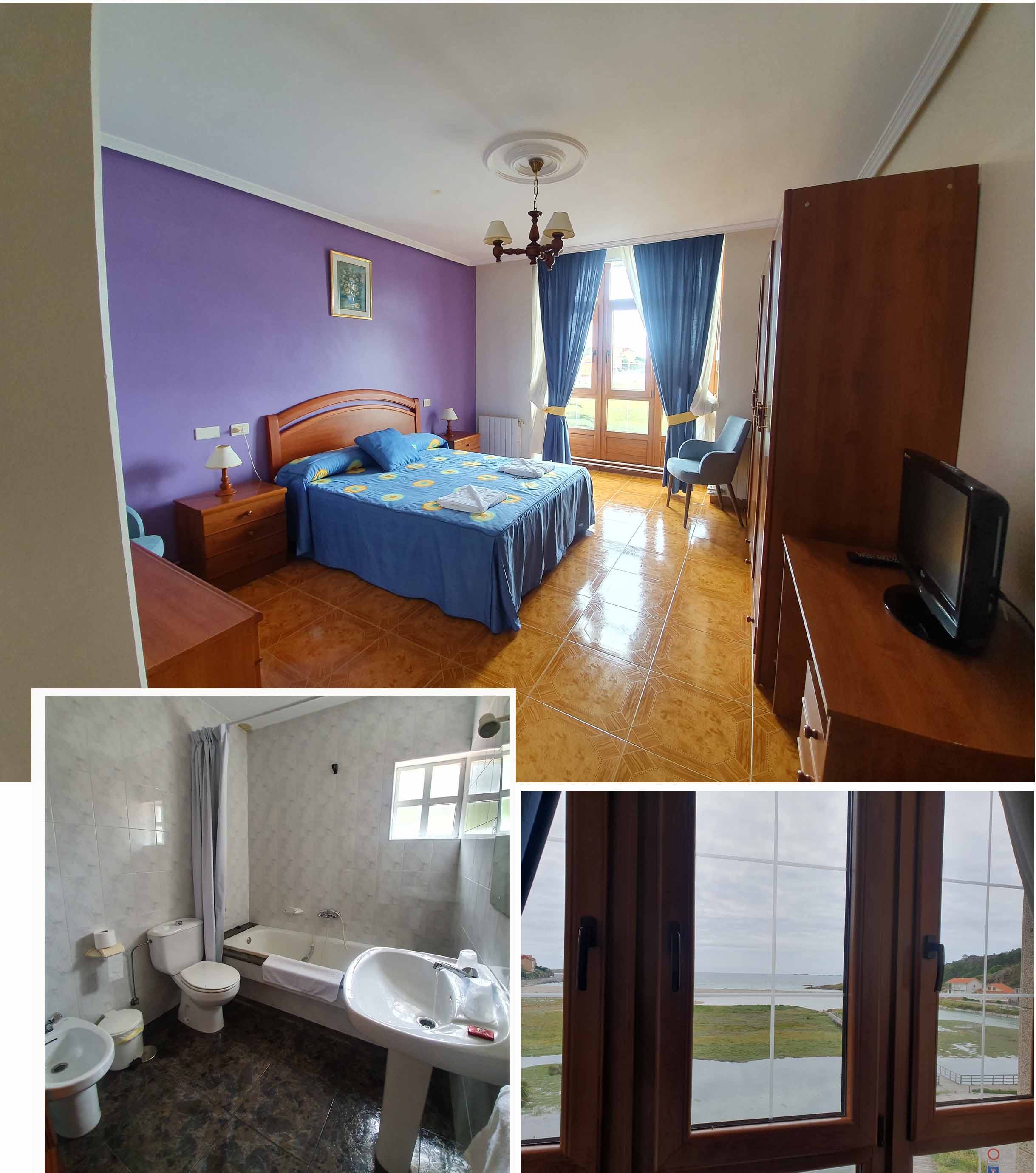 The room and toilet were spacious and clean. We seemed to come at an off peak time as there were the only customers at the hotel.  The cost of our room was €55 for one night and it came with morning breakfast.

The next morning we had our breakfast at the bar/restaurant at the ground level of the Pension. Breakfast was juice, coffee, cheese, croissants, Jamón serrano (Spanish cured ham), bread, butter and jam. Typical simple Spanish breakfast – nice.. but we still missed our eggs! 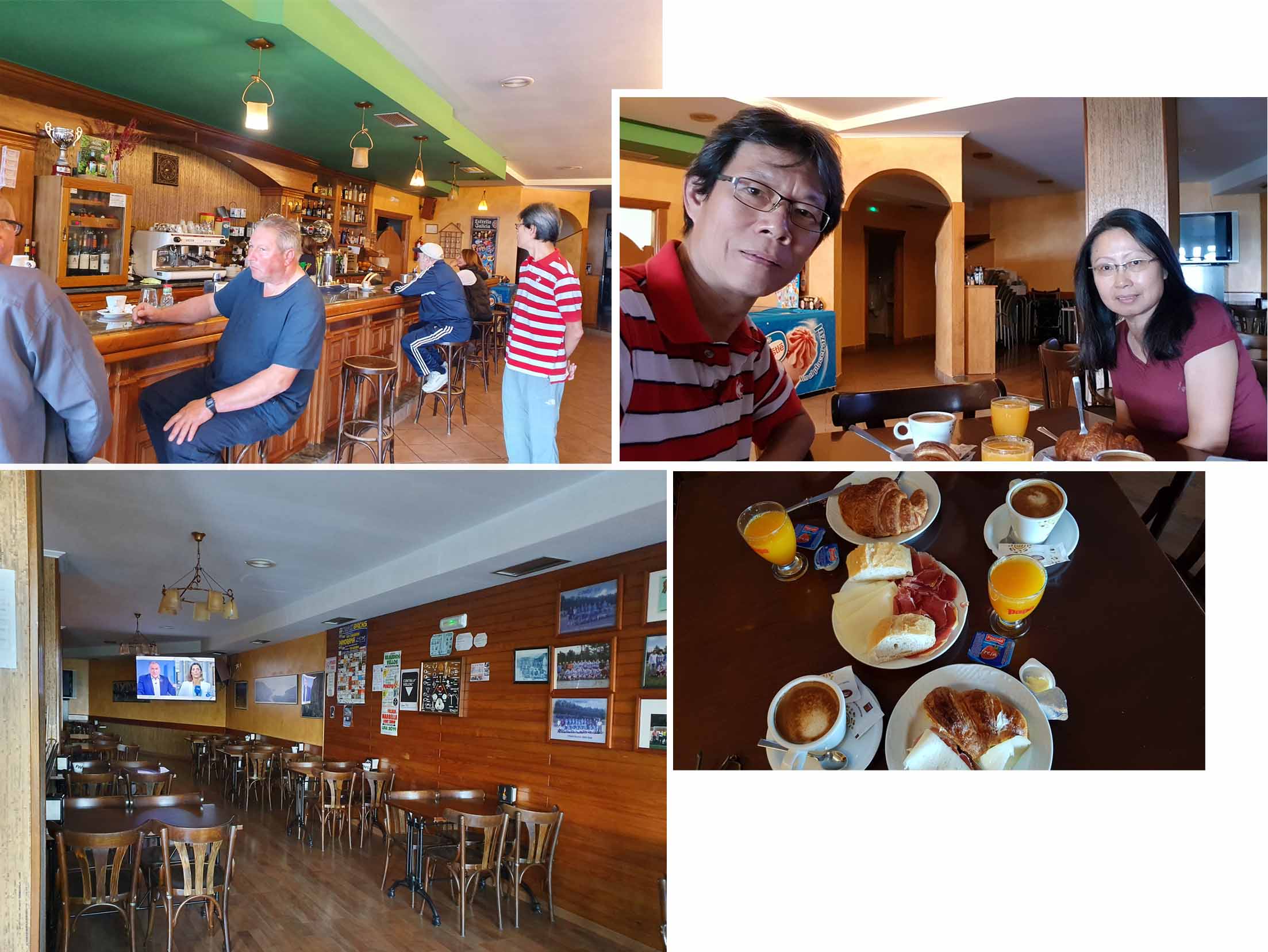 We liked our stay at Pensión Sol y Mar, our room had a great view, breakfast was good and street parking nearby was free. Our room was on the third level so we had to climb a number of steps to our room. Luckily we were still “young” enough to have that energy to go up the stairs.