We had two nights in Seville, on the first evening we went to a local tavern to see the “Flamenco” (spanish dance). After the dance we visited Las Setasvisited  de Sevilla a magnificent modern architecture. The next day was a whole day of walking/exploration around Seville Historical town. We saw Catedral de Sevilla and Plaza de Espana. 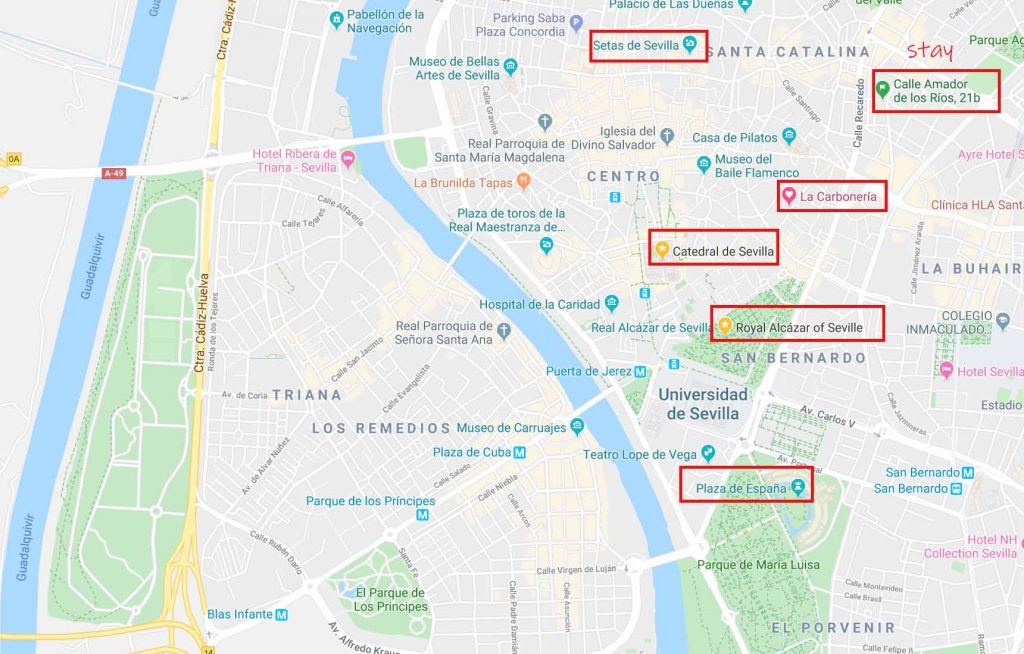 from Benagil to Seville

It was long eastward drive from Benagil to Seville, 245km in 2 hour 35 minutes. Eighteen days ago we crossed from Spain into the north part of Portugal, time passed so quickly and eighteen days later we were in the southern part of Portugal and crossed back into Spain. 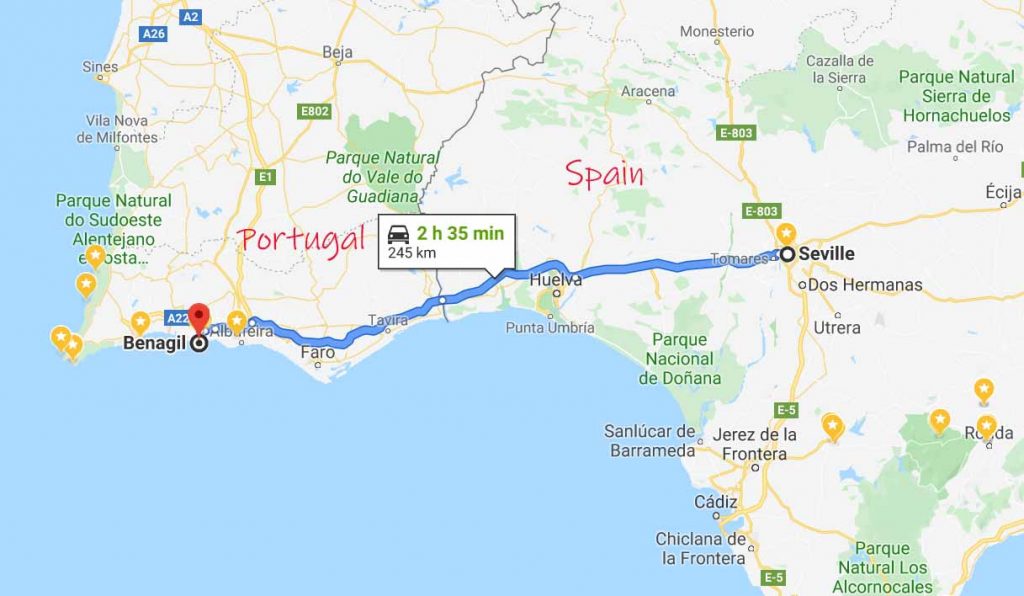 Our petrol/gas was running low so we stopped at a petrol station (still on the Portugal side) to get some petrol. We did not filled up the entire tank,  just got enough to get us into Spain as the petrol in Spain was about 10% cheaper than that in Portugal. On Spain side we stopped at a highway rest area to fill up the car tank and also to fill up our tummy. We ordered Portugese tart to go with our coffee, coffee was nice but Portugese tart in Spain was just “not so great”. 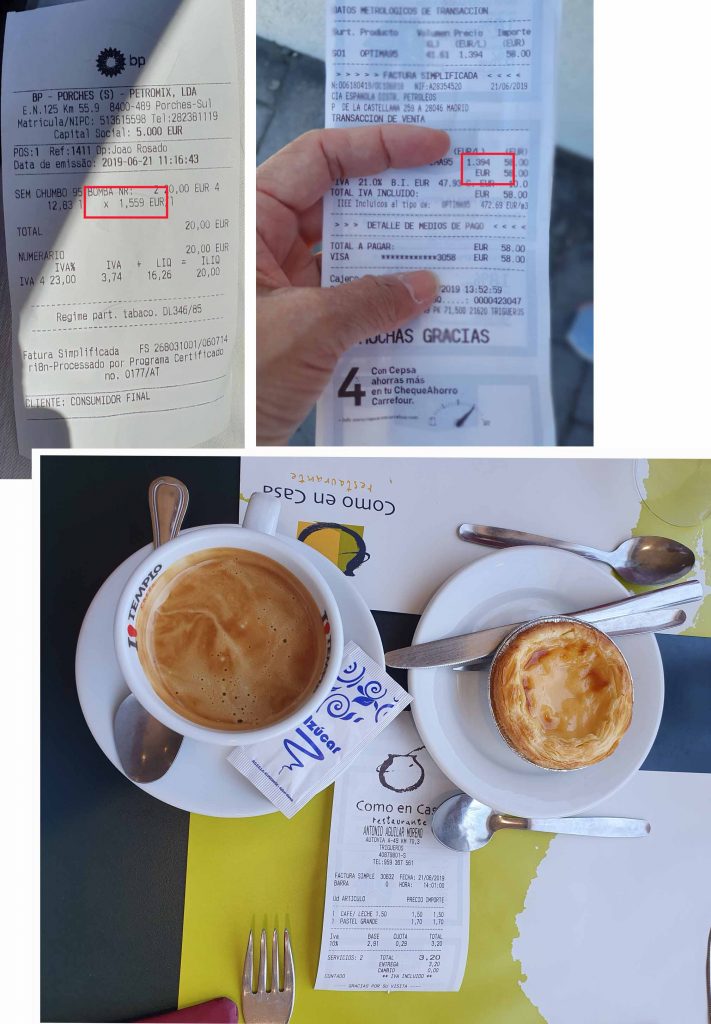 Stopping at “Highway Stop” for gas, coffee and tart

We reached Seville at about 4 pm and drove directly to our stay. The road beside the footpath of our “stay” was paid street parking (blue line). Street parking charges started at 9 am to 2 pm and then 4 pm to 8 pm on weekday. On Saturday it was 10 am to 2pm and Sunday was free. So outside those hours there were no charges at all. The parking charges was €1.70 for two hours.

We did some calculation and concluded that it would be cheaper to paid street parking rather than parked at a parking garage which charges to €6 to €10. We arrived on a Friday after 4 pm so for that day we needed to pay parking from 4 pm to 8 pm (€3.40). On Saturday we paid another 4 hours (€3.40) then it would be free till Monday 9 am. On Monday we left at 10 am so we paid for one hour (€0.85) of parking. 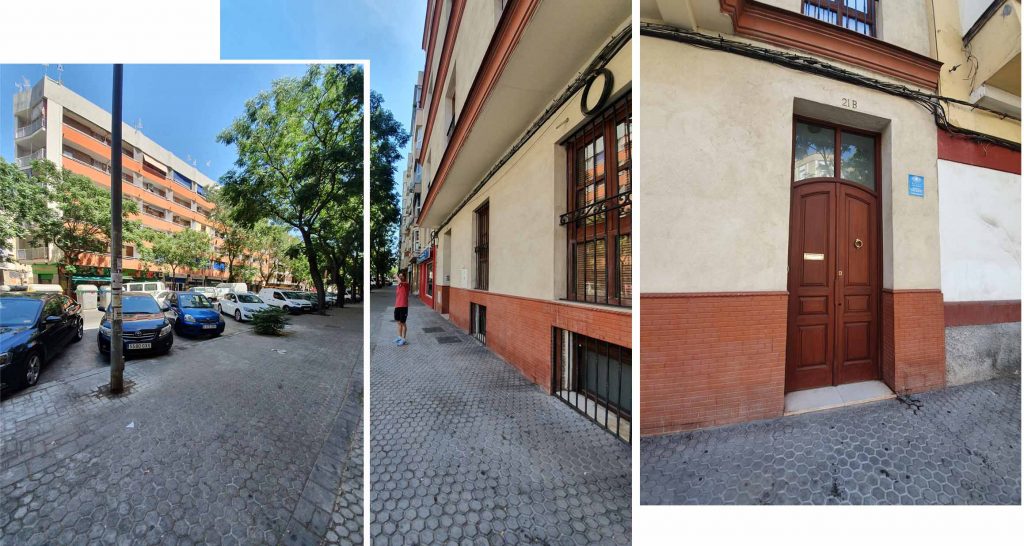 The problem with paying for parking using the parking meter by the roadside was each ticket was for at most two hour duration.  Which meant that we had to return to the parking meter to extend the duration for another two hours. This certainly limit our freedom to be away. Lucky for us our “host” introduced us to “Apparkya” an online parking application. This way we could extend our car parking for another two hours when we were in other part of the city. 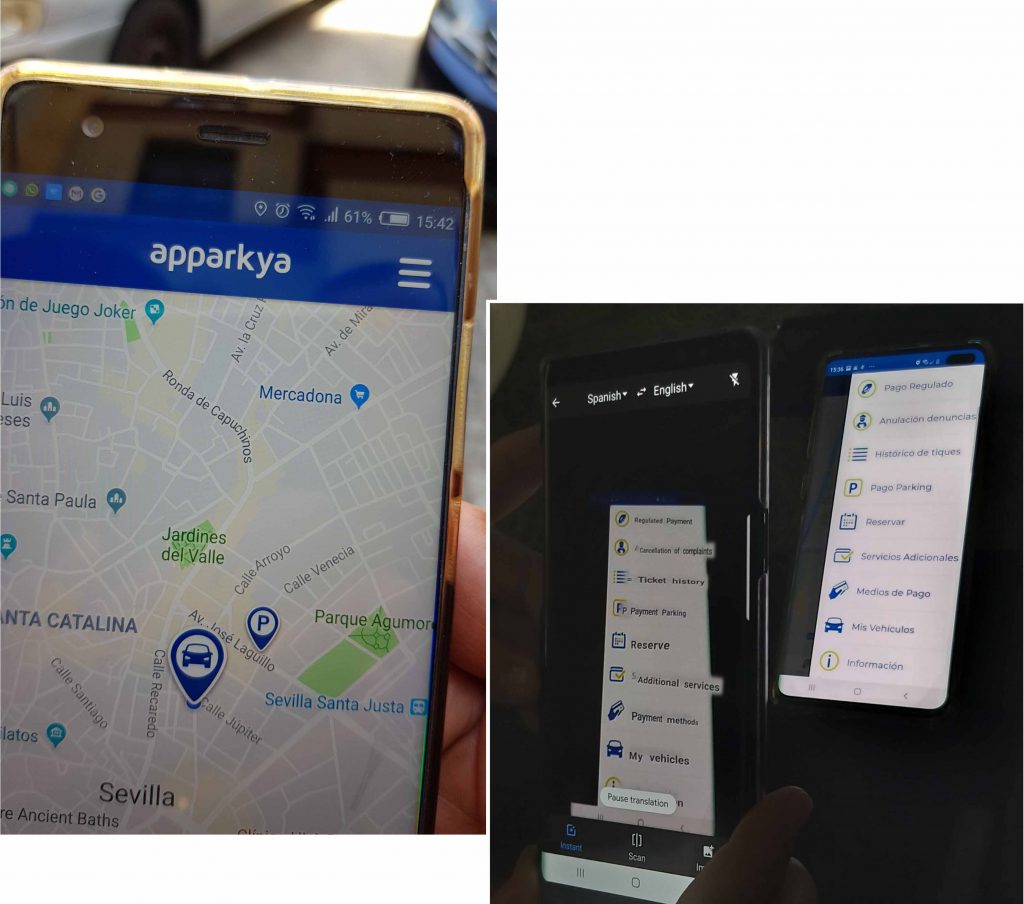 The parking application was in Spanish and there was no English version of it. The only way to instantly translate the instructions was to turn on Yat Thong’s phone “google translation camera” mode function and place Yat Thong’s phone over the parking application that was installed on my phone. With that we were able to 1)Sign up, 2) Fill up Car details … car plate number and 3) Fill up payment information … credit card information. Once this setting was completed it was easy to extend the parking duration of our car (which was parked outside our “stay” the whole time in Seville) even when we were walking in other part of town.

After dinner we took a walk to La Carboneria, it was about 800 m from our stay and took us about 15 minutes of slow walking to reach the place. 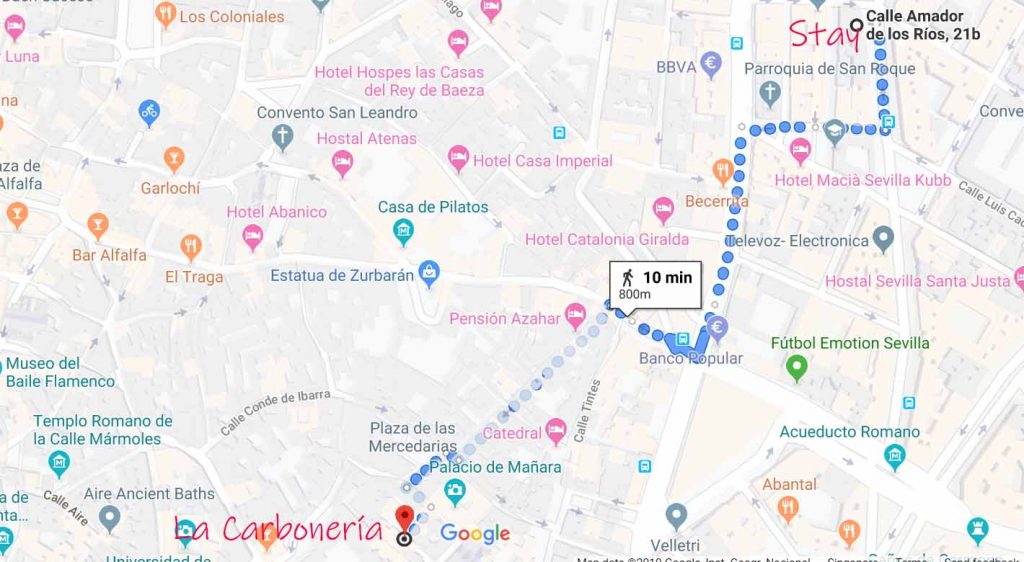 La Carboneria was located near the historical center of Seville. The buildings on the streets looked old/ancient, after all Seville was about 2000 years old.  The street were tidy and clean and the pedestrian pavement looked shining and polished. 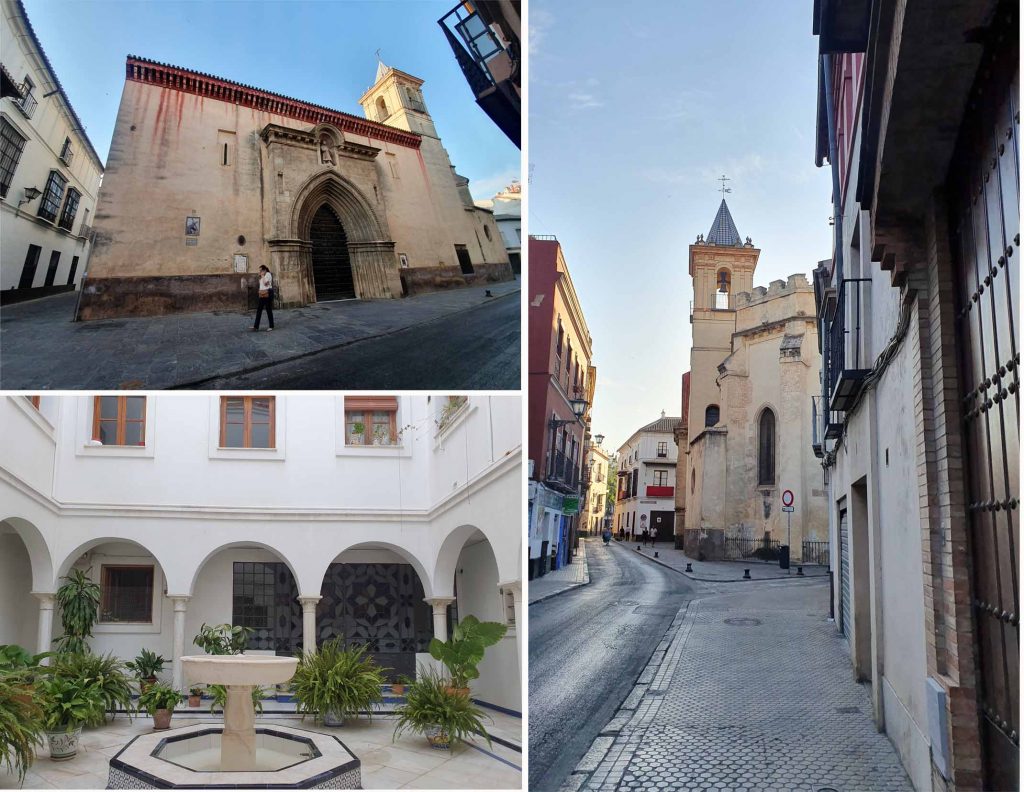 We reached La Carboneria at about 9.10 pm and the place was already packed with people. There was a small platform in the center of the tavern where the dance performance would take place at 9.30pm. All the tables nearest to the platform were already taken up. We managed to find a small table which did not have a view of the platform to wait for the performance to start. 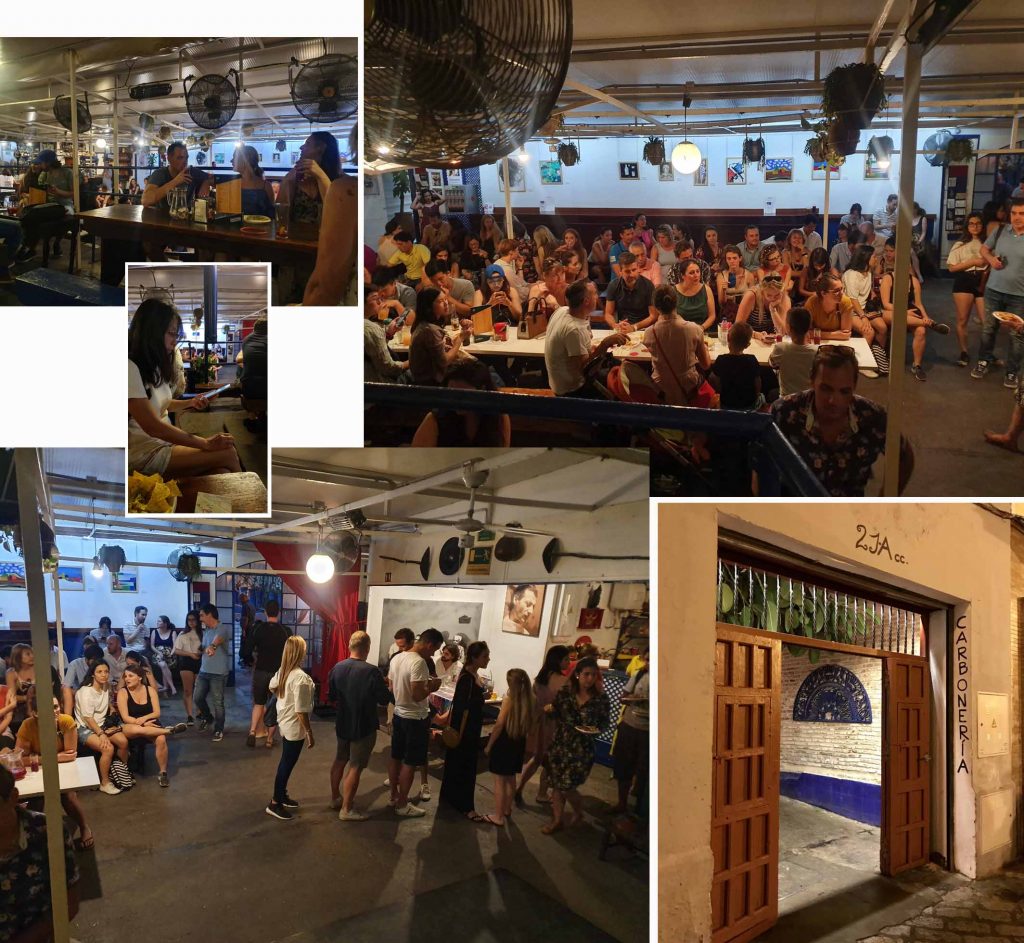 It was 10.00 pm and the weather was nice and cool which so unlike the hot weather in the day. We did not want to end the night  and return to our stay. We decided to visit Las Setas de la Encaracion also known as Las Setas de Seville which looked “visitable” in the night too. 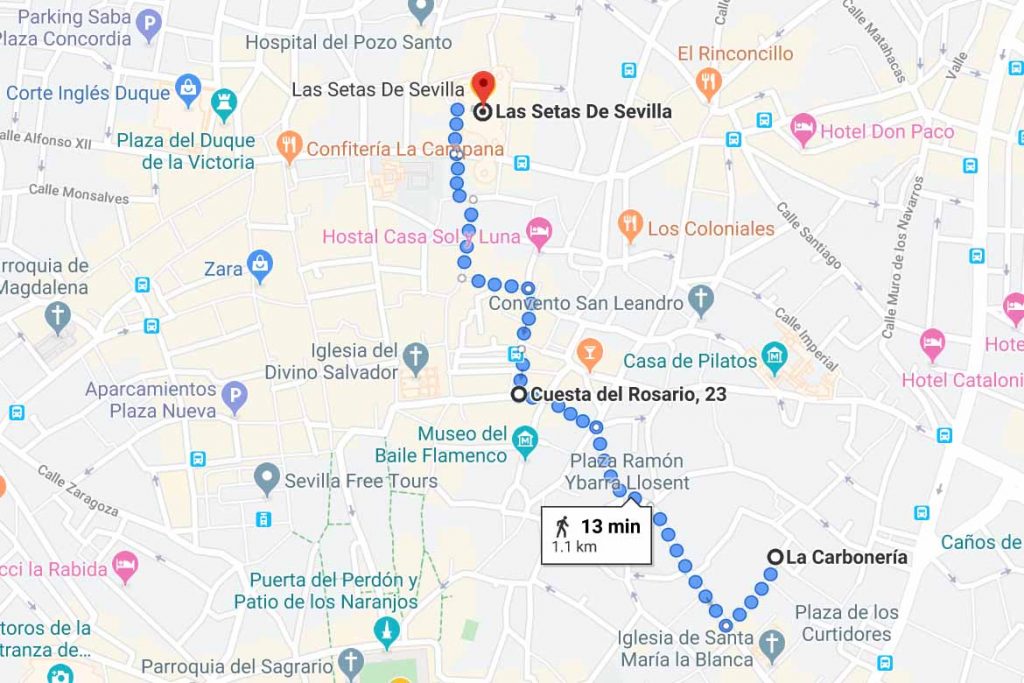 We walked for about 1km from La Carboneria to Las Setas de la Encaracion which. We strolled passed quiet residential streets and vibrant squares with cafes and restaurants still packed with customers. Though the time was 10 pm the sky was still not pitch black yet. The old city was nicely lighted, clean and “smelless” and certainly did not give off any “insecure” vibes so the 15 minutes walk was rather pleasant. 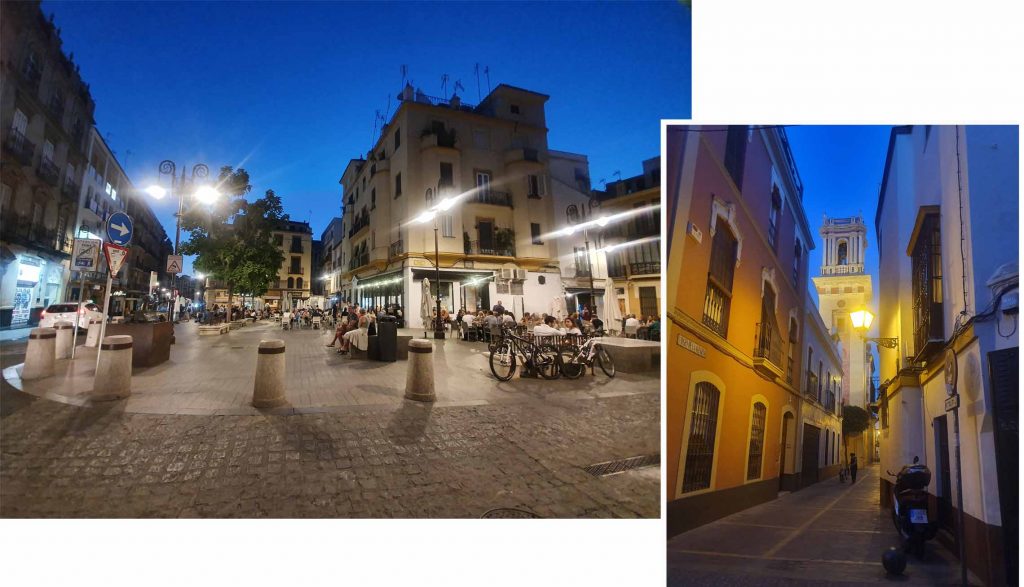 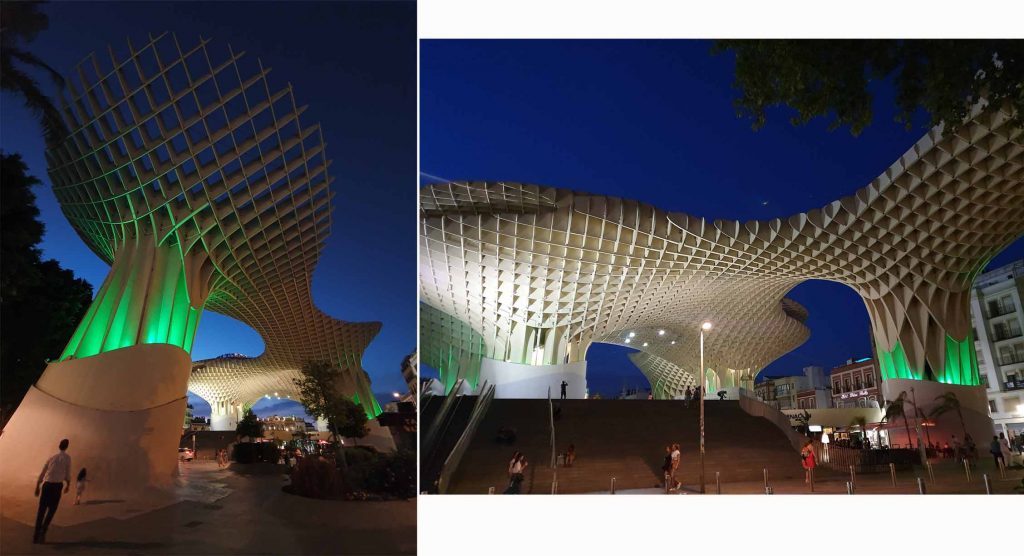 Las Setas de la Encaracion was a wooden structure. It was designed by  German architect Jurgen Mayer and completed in April 2011. Its dimensions were 150 m by 70 m and about 26 m high and claimed to be the largest wooden structure in the world!  It contained 3,500 pieces, joined by almost 3,000 knots and 16 million screws. This wooden structure of 2300 cubic meters of raw Finnish pine microlaminated wood covered with waterproof breathable and flexible polyurethane sat on huge concrete columns which also housed the elevators that went up to the top. 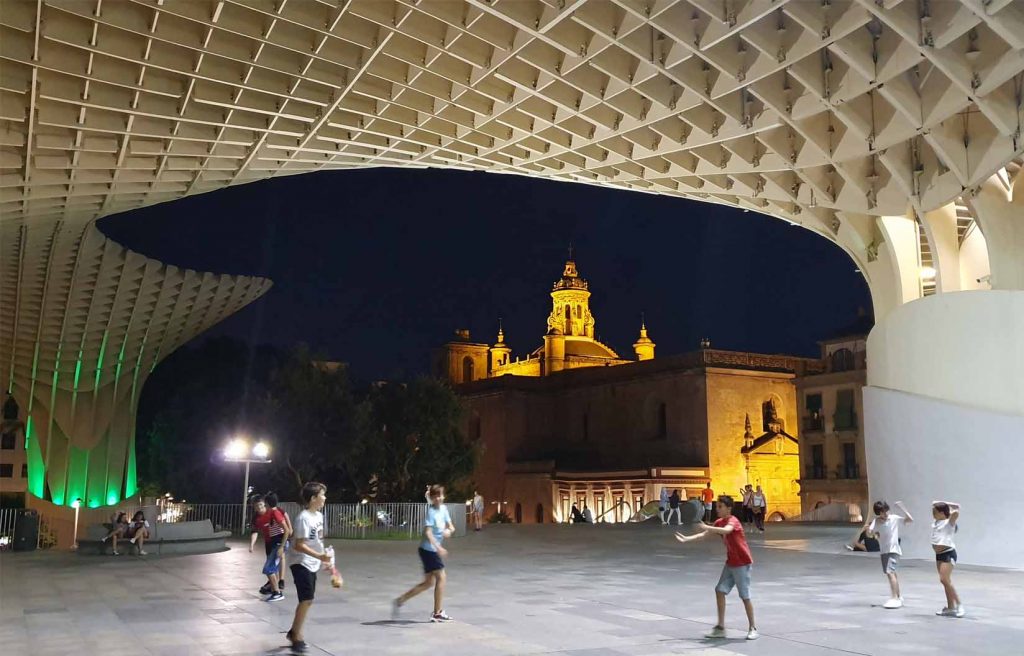 Next morning we were back at the historical quarter again. We were on our way to the Catedral de Seville. Along the way we passed residential complex with beautiful manicured garden. 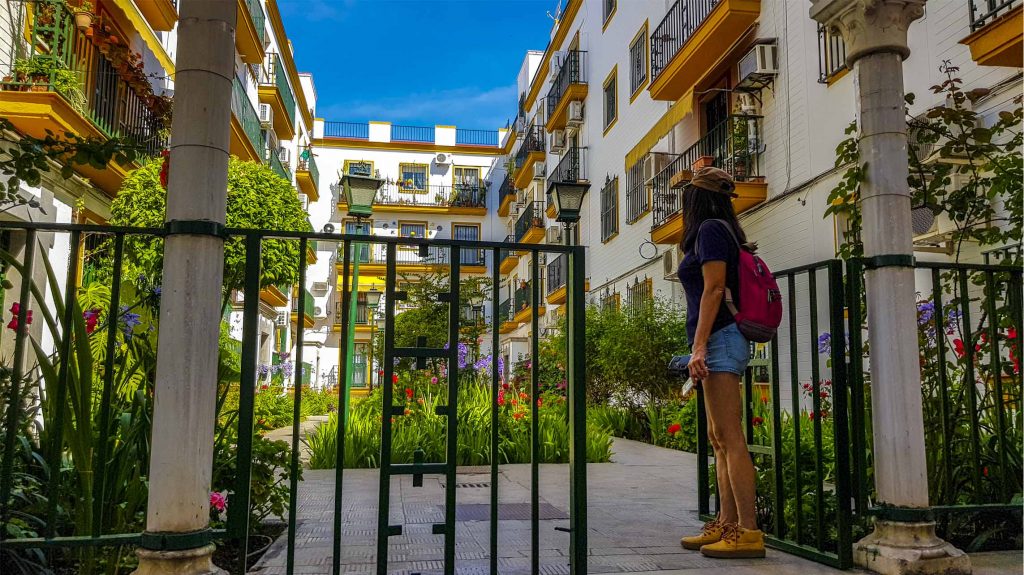 An apartment in the Seville Old Quarter

It was about 11 am in the monring and the weather was getting very hot. The houses and the building in the old quarter looked very well maintained. Their paint stil looked good. 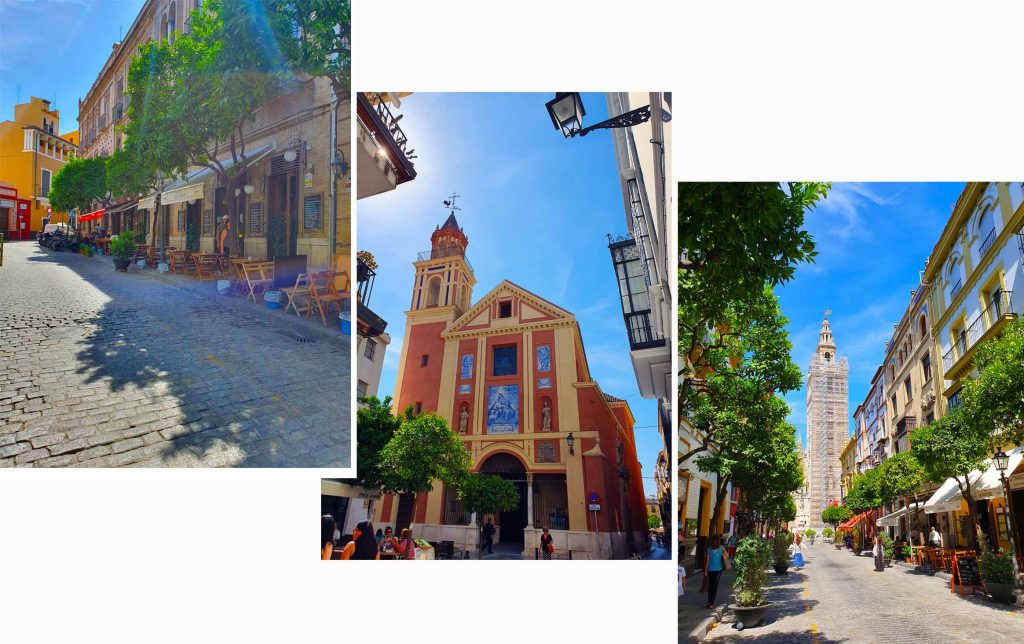 The catedral was about 1.4 km from our stay. It was a Roman Catholic cathedral and was registered in 1987 by UNESCO as a World Heritage Site, along with the adjoining Alcazar palace complex. It was the third largest church in the world as well as the largest Gothic Church. 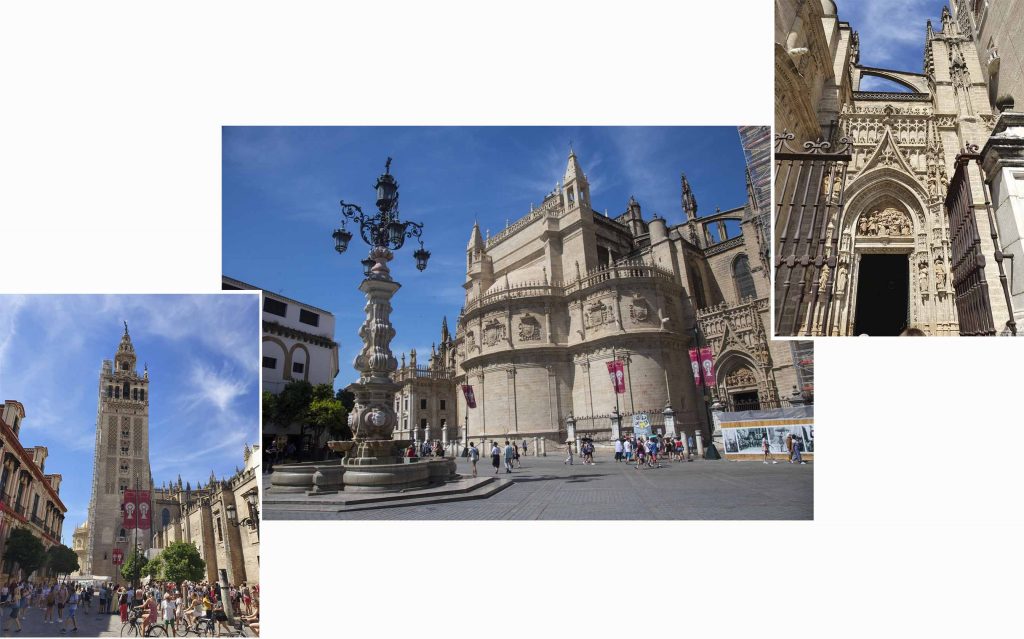 The cathedral had a bell tower and was named the Giralda. Its height was 105 m and had square base. The Giralda was a former minaret of the mosque that stood on the site when under Muslim rule. It was converted into a bell tower for the cathedral. 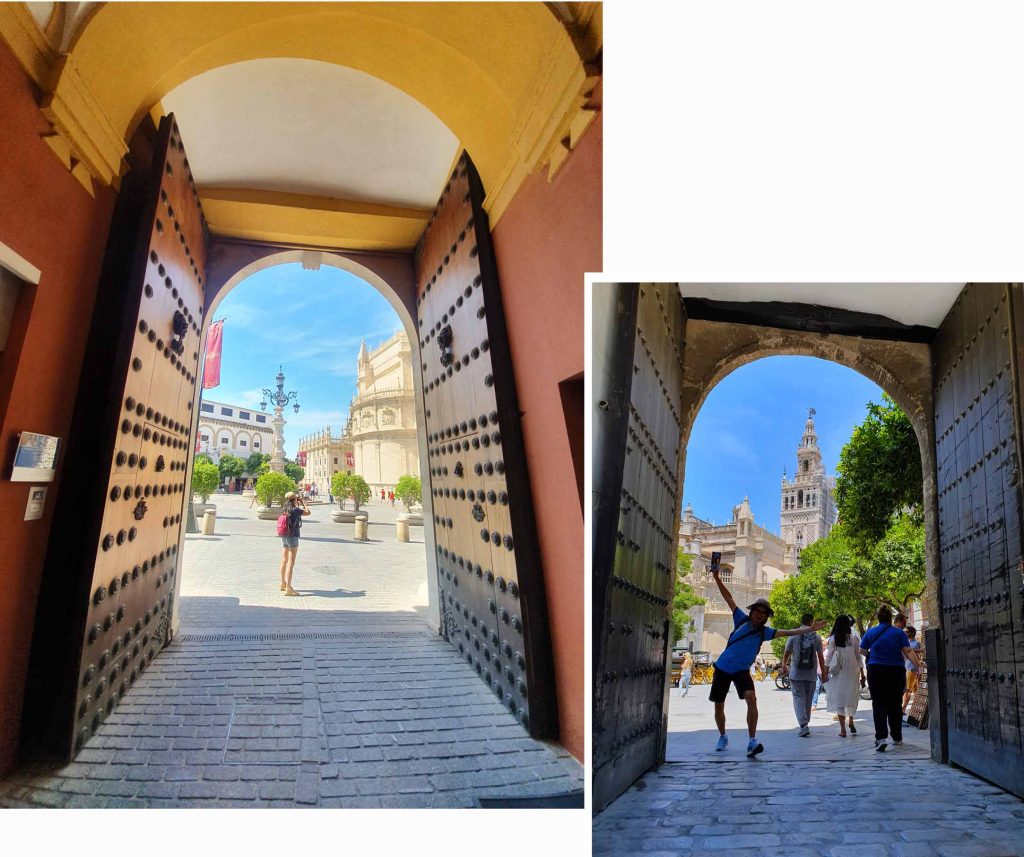 We walked around the cathedral on the outside, there were 15 doors on its four facades. Each door featured a unique carving.The largest one was the Main Door or Door of Assumption which was sited in the center of the west facade. The door was beautifully decorated with many statues. 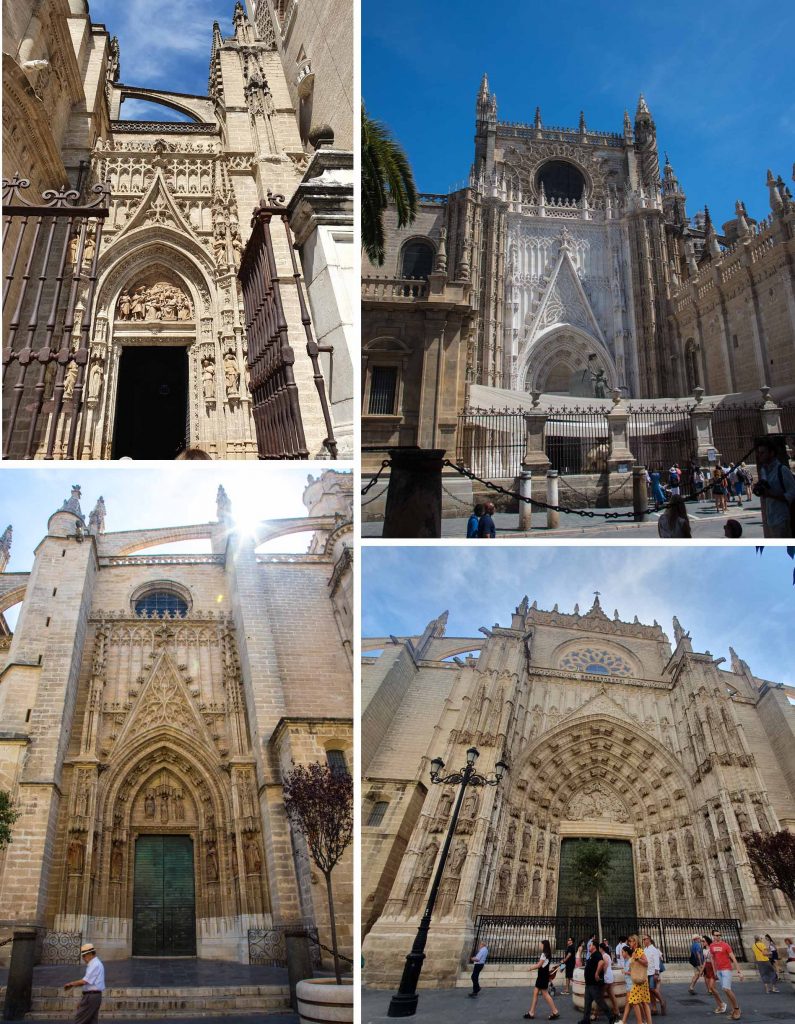 The doors of Catedral de Seville

The Catedral de Seville had 80 chapels, we saw a chapel that was opened and entry was free of charge. We went in to explore the chapel. We loved the ceiling, it was covered with intricate carving. 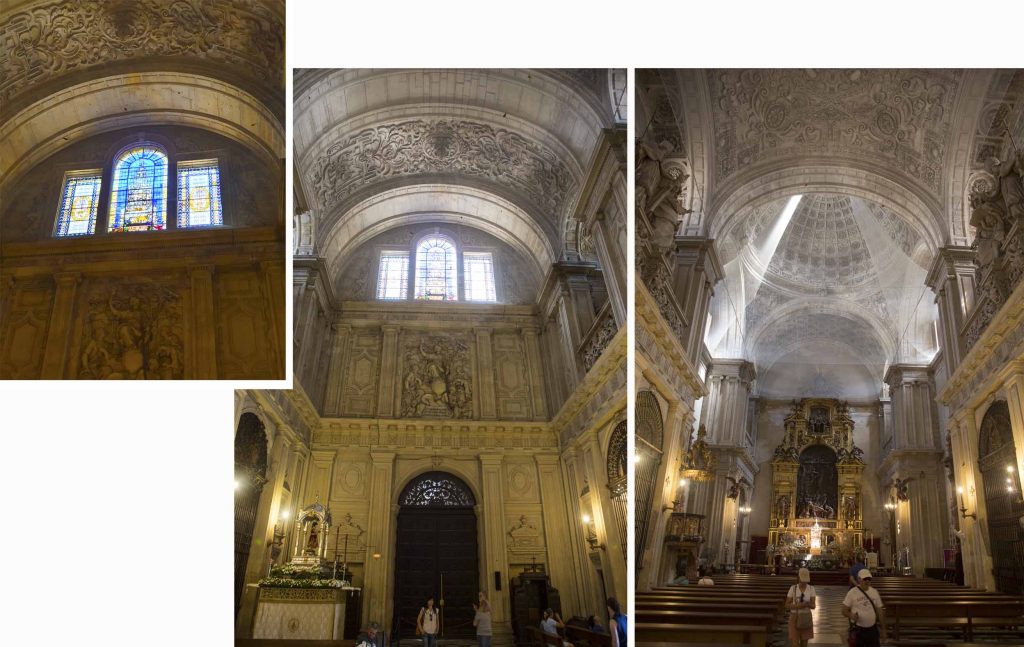 One of the many chapels in Catedral de Seville

Seville historical quarter was a very vibrant place. There many visitors moving around, snaking in and out the labyrinthine streets, hopping in and out of souvenir shops, plazas and gardens, chilling inside or outside a cafes. 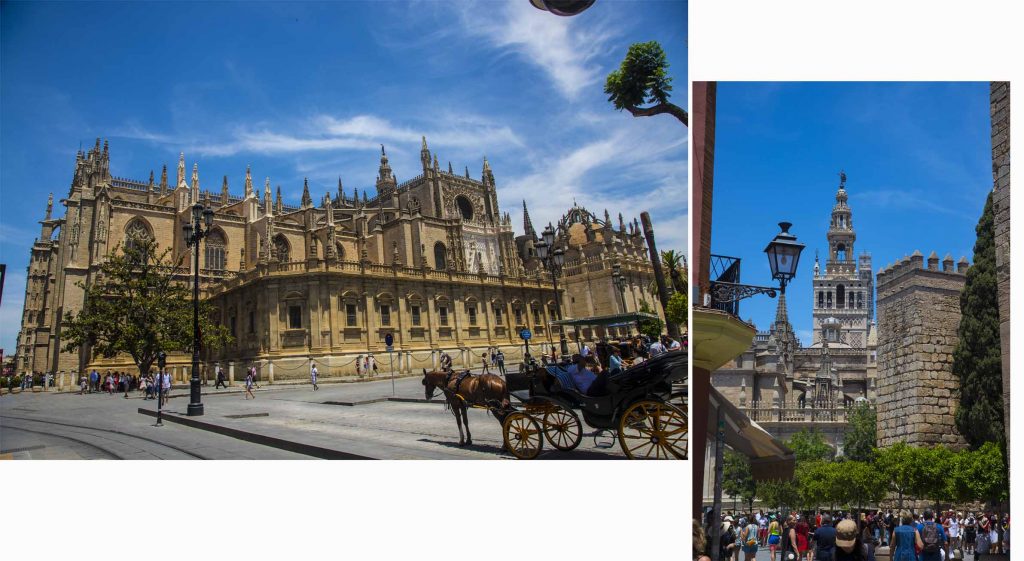 There were long queues to get into Catedral de Seville and Royal Alcazar of Seville. We did not wanted to spend time queuing up as we did not mind not seeing the interior of the Catedral and Alcazar.

We walked about 1.4 km from Catedral de Sevilla to Plaza Espana. It was already 2.30 pm in the afternoon and the weather was even hotter than before. We could probably get to Plaza Espana by public transport but by walking we would see more of the historical quarter. 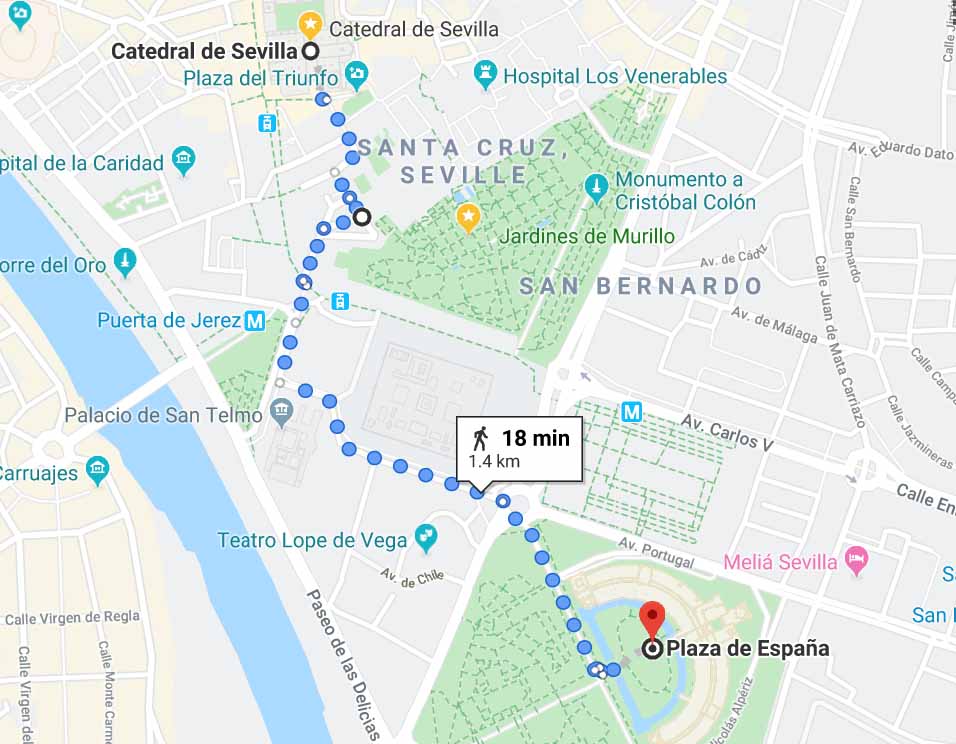 Just before we reached Plaza de Espana we passed a beautiful “golden top” building. It was Teatro Lope de Vega. We thought it looked magnificent. From there we reached the entrance of Plaza Espana.

The Plaza de Espana was a huge/giantic/humongous complex. It was a semi-circle complex with a moat running along the half circle. There were a number bridges crossing the moat and many  visitors were rowing boats in the moat. 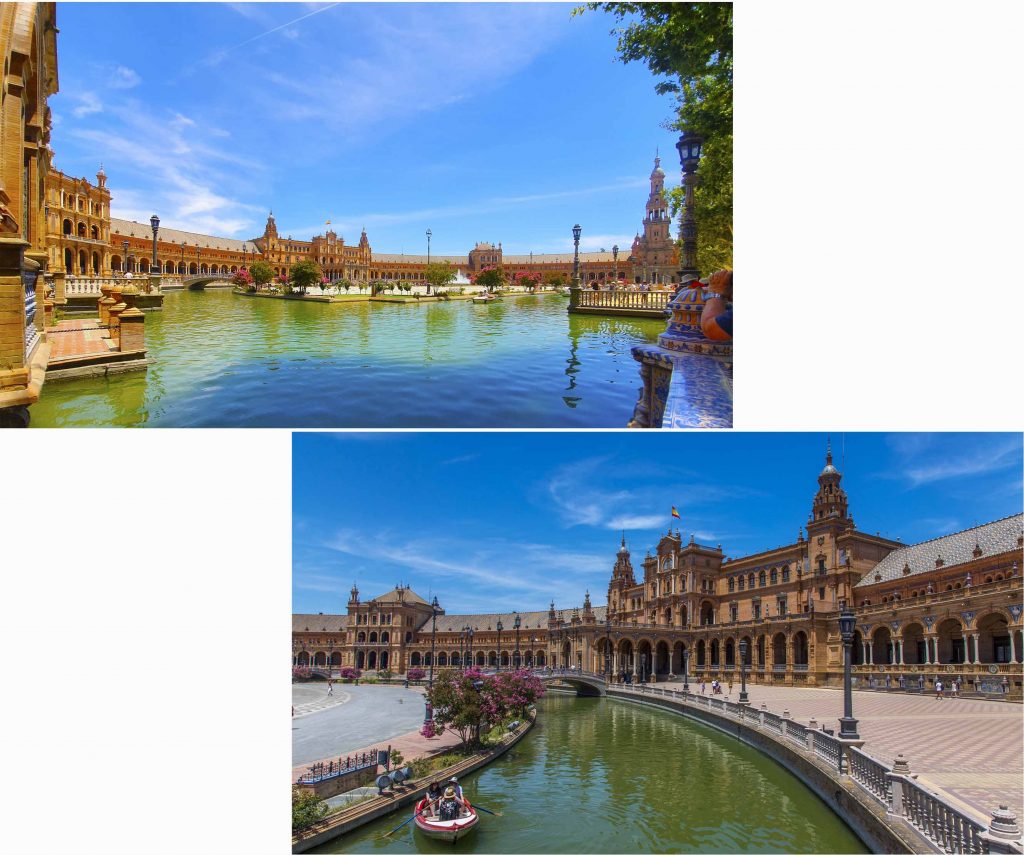 The plaza was a magificent building. At two ends of the semi-circle complex were tall towers, the north tower and the south tower. The size of the Plaza was 50,000 square metres which was about five football pitches. On the ground level was a long stretch of portico and on the first floor was a long balcony. The central balcony was impressive. 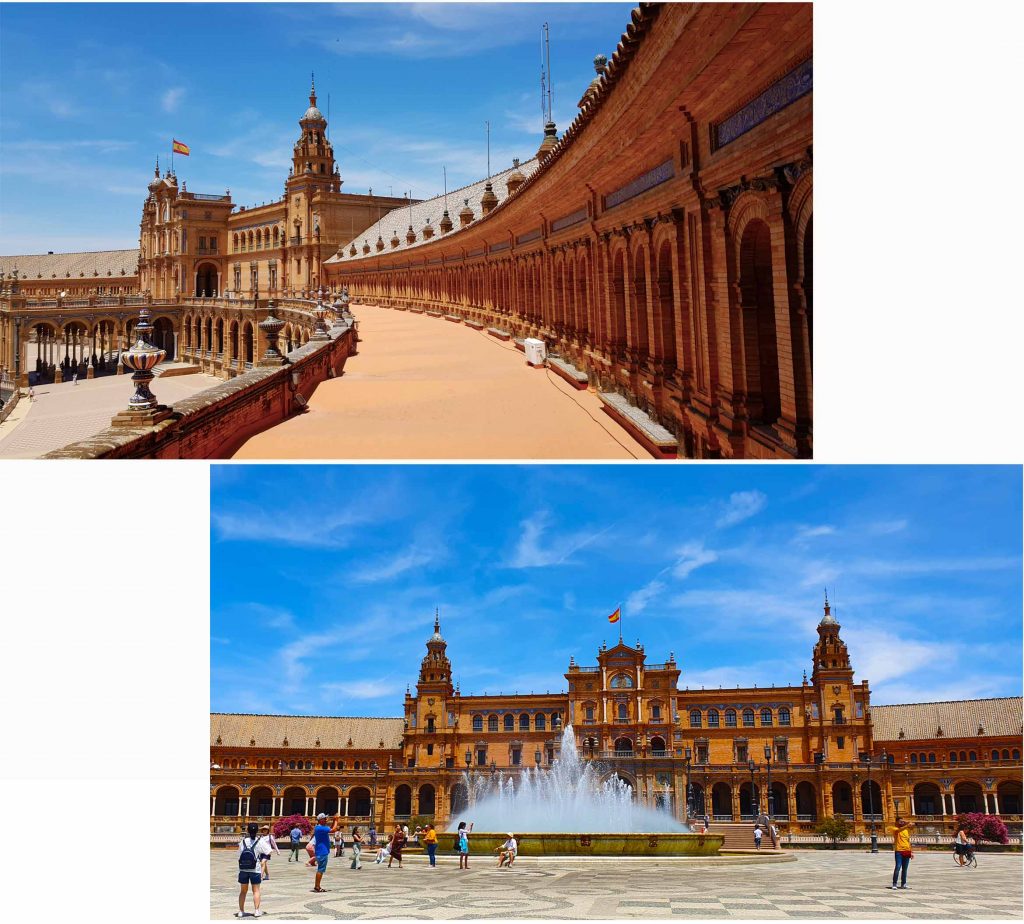 On the ground level along the wall by the canal were 48 alcoves, one for each province of Spain, each with a relevant tableau and map, all designed on colourful azulejo (blue painted ceramic tiles). 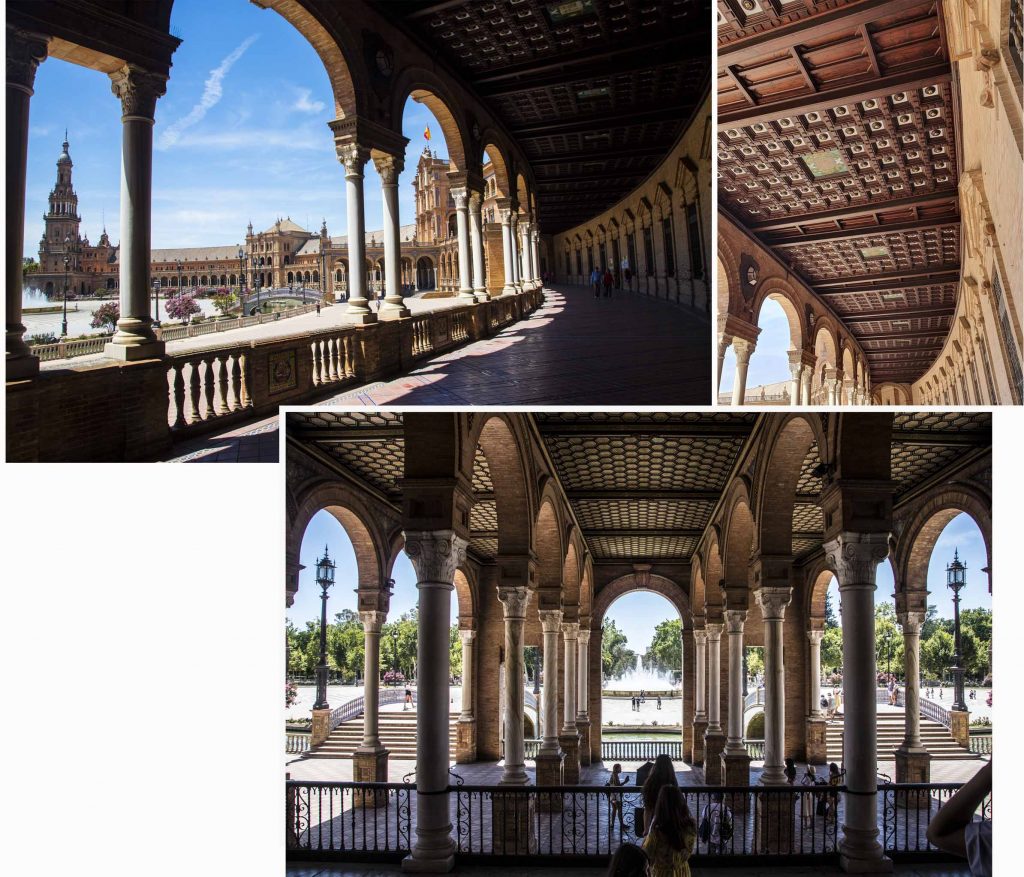 The 48 Alcoves at Plaza de Espana

The Plaza was built as the centrepiece of the Expo 29, which took place in Maria Luisa park. The architect Anibal Gonzalez designed the Plaza to wow the Expo’s other exhibitors, and visitors, from around Spain and Latin America, and to show Seville’s talents in industry and crafts.

The grandiose of this Plaza had made it a favourite filming location for huge budget films (such as Star Wars, Lawrence of Arabia etc) for decades. 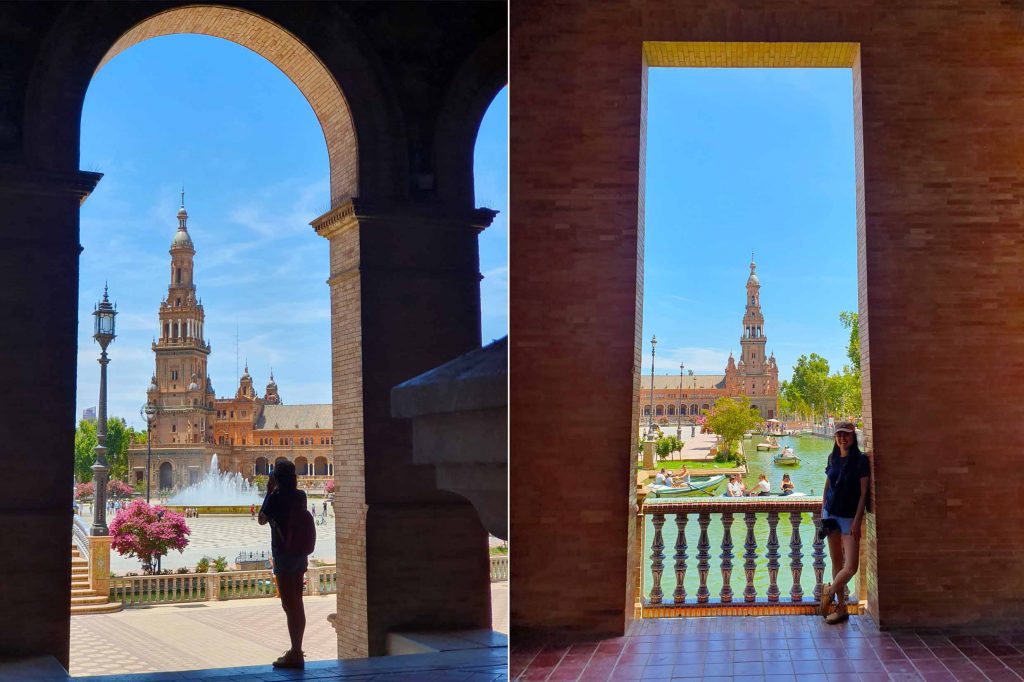 I loved icecream/gelato and when the weather turned hot my craving for a cold icecream grew stronger. Our host had recommended Helados Rayas icecream which he said his wife “loves” very much.  So on the second evening after we finished our dinner at our stay, we took a “after meal” strolled to the old quarter and located Helados Rayas. There were many favours so we had chocolate, lemon, vanilla. The icecream costed €3.50 per cup (medium). We found the icecream a bit too sweet for our tastes. 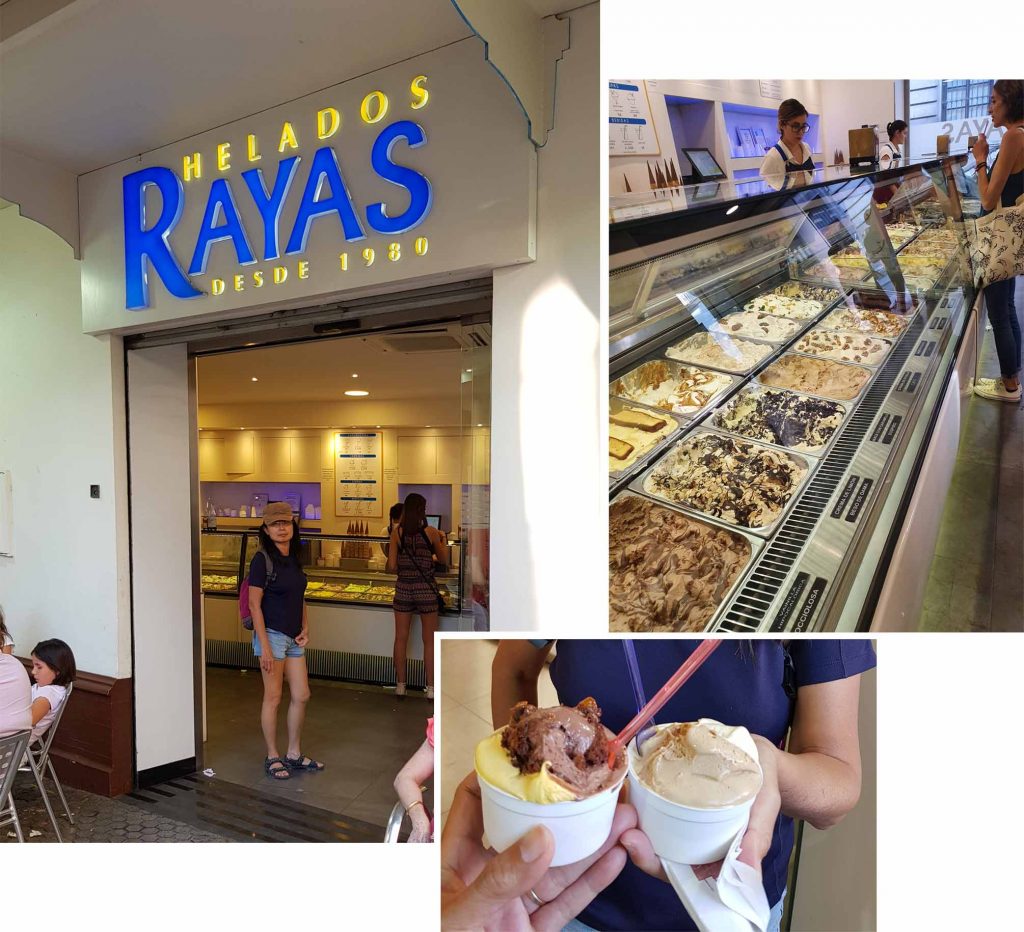 Our stay was an apartment in Seville – Apartment Calle Amador. It was located just outside the historical quarter of Seville. The cost for two nights was €128 and we placed our reservation on booking.com. Our host was great, he met us outside our apartment at the agreed time and showed us the apartment.

The apartment was beautiful! It was much better than we expected. It was huge, clean, modern and cosy. On apartment was on the ground level, at the entrance level was the dining space, the sitting lounge, a full size kitchen (with a washing machine) and a toilet. The deco was lovely and when we looked out of the window we could see our car parked by the street! 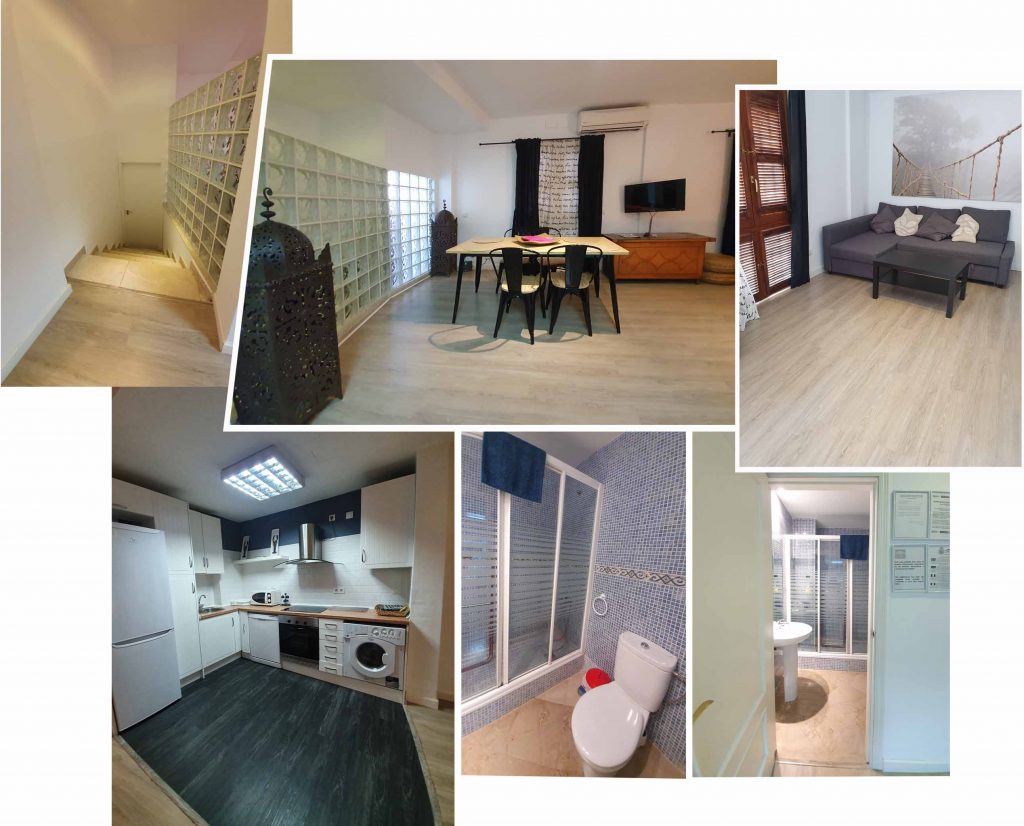 Our bedroom was a level below and it was a huge bedroom with walk-in cupboard and bathroom. Apartment Calle Amador was certainly value for money. Best of all our host lived just upstair so if we needed any assistance we just needed to whatsapp him and he came down to help. The only time we needed help was to confirm the usage of a mobile parking application Aparkkya. 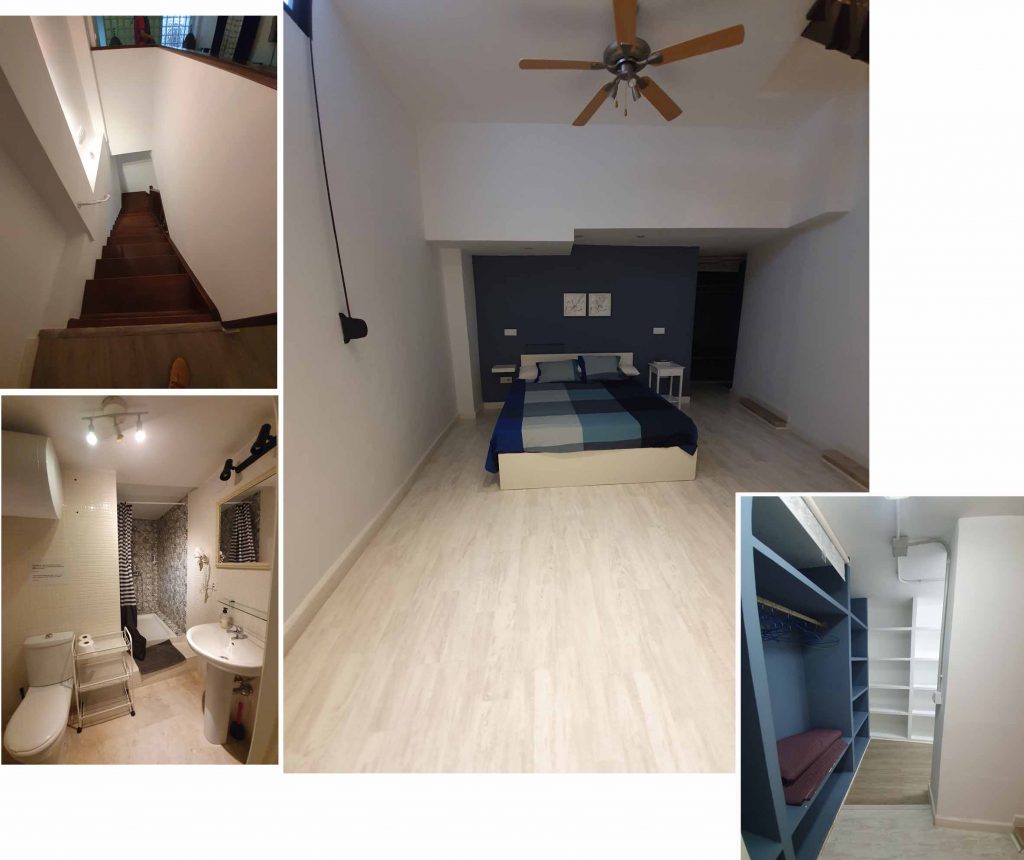 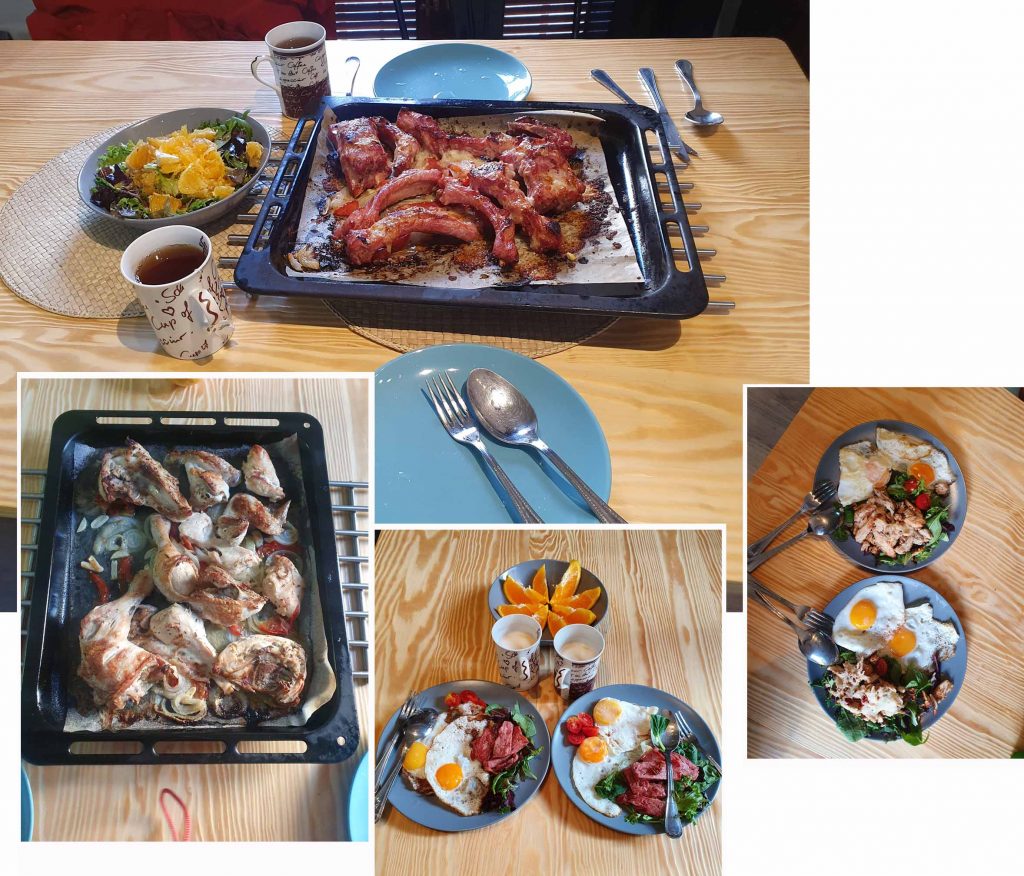 We loved our stay at Apartment Calle Amador, it was cosy, it was value for money. It was spacious and it felt like home. Since we arrived in the weekend, parking cost was also much lesser than we expected. The apartment was also located within walking distance to the traditional quarter of Seville which allowed us to visit the old town without taking public transport.