We had one night in Granada. We started our journey from Colomares Castle and drove 187 km to Granada. Midway we stop at Frigiliana a beautiful white Spanish Village for coffee break. We reached Granada at about 3 pm and found to our horror that all the tickets for The Alhambra were sold out, there were no more day or night entrance tickets for the day and the next few days. That evening we explored Granada town center on foot and went up two miradors to get a stunning view of the Alhambra and Granada town. 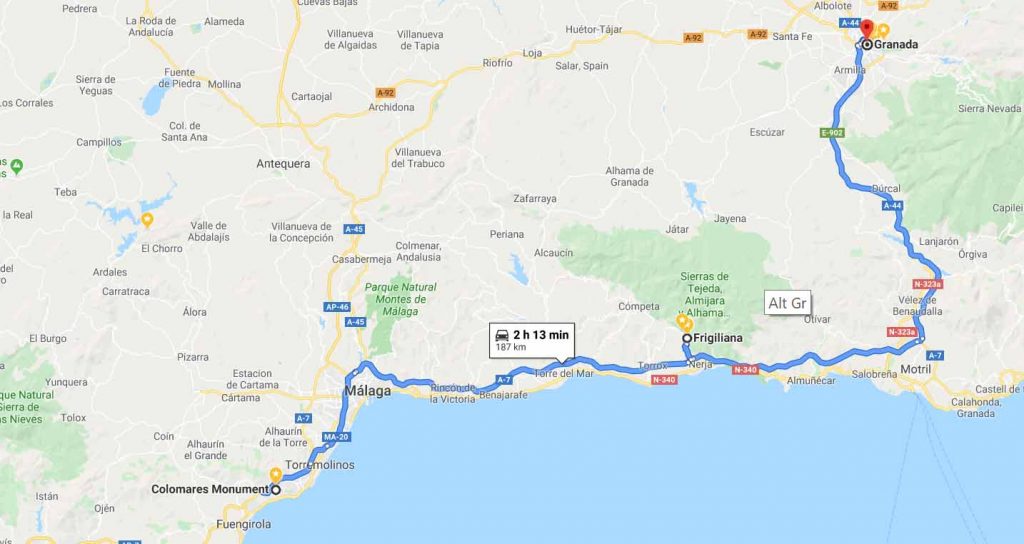 Route from Colomares Castle to Granada

The drive from Colomares to Frigiliana took about 1 hour over a distance of 87 km. It was just midway on our way to Granada and was a beautiful place to stop for a nice coffee break. 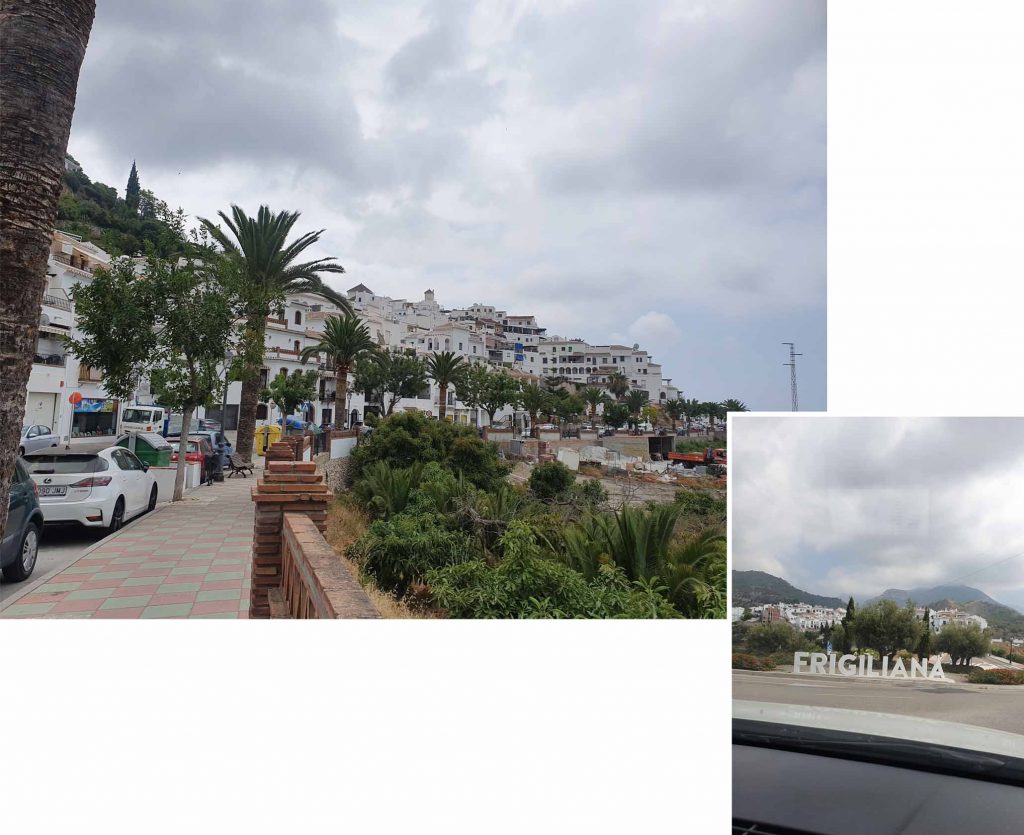 This “whitewashed houses” village had been voted the most beautiful in all of Spain. Looking down to the valley of white houses we definitely agreed that this village was the most beautiful of the Spanish white villages we had visited so far! 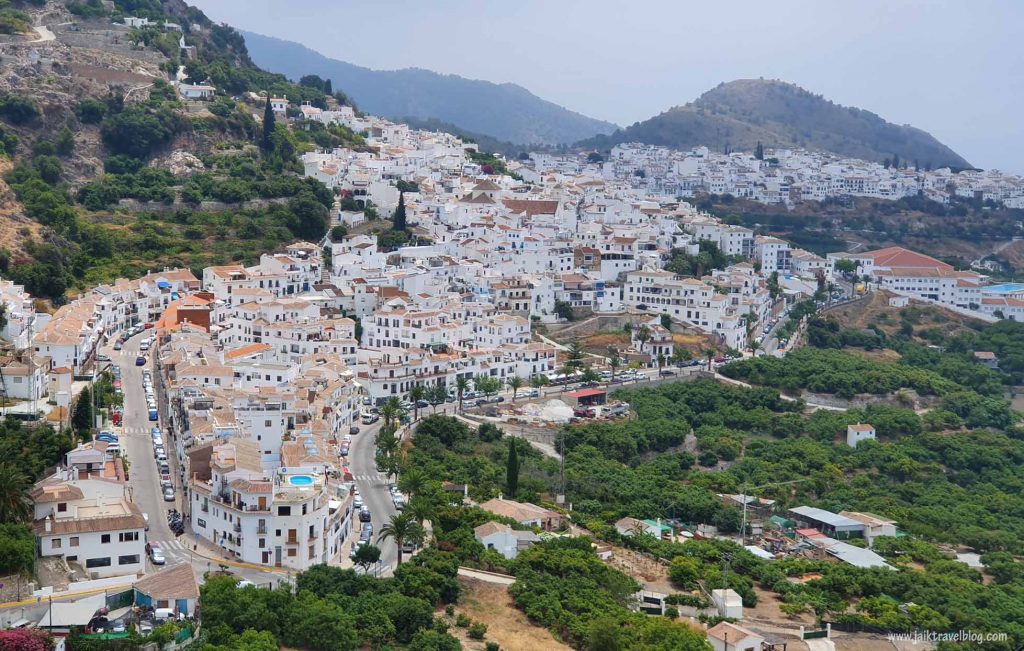 Parking was not an issue, we found free street parking along the main road. After parking our car we walked down the road to a Plaza de las Tres Culturas which was a complex with many cafes and restaurant and a panoramic view of the white village! We found an Italian cafe, Levi Angelo that had this huge “Home Made ice Cream” at its door and went in to investigate. We ordered two cafe latte and sat done to enjoy the coffee. 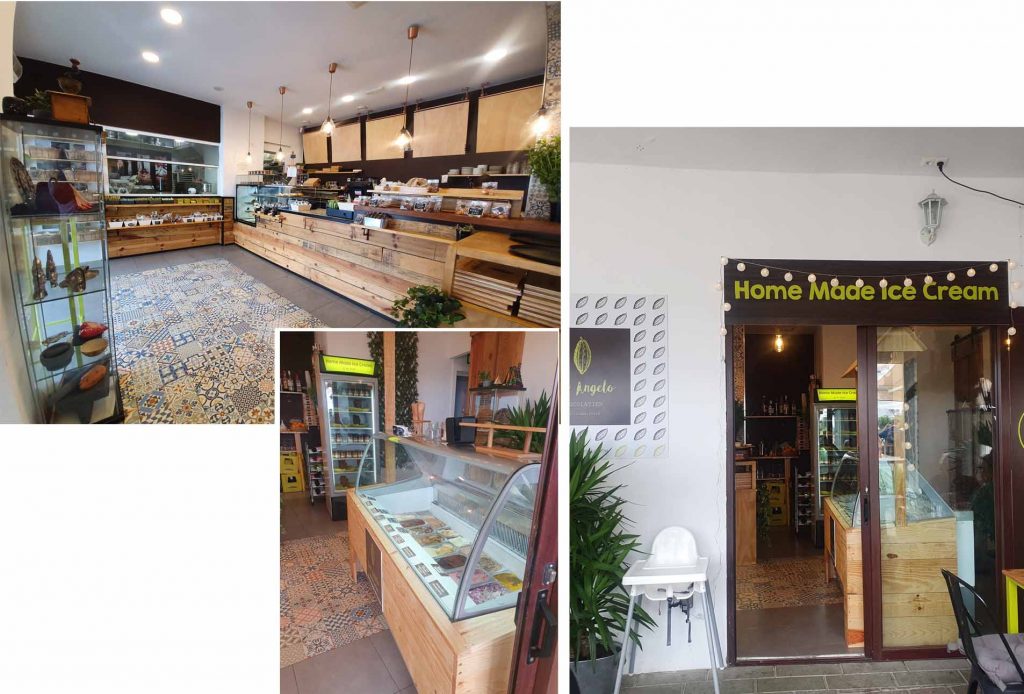 Yat Thong went into the cafe and “chit chat” with the owner who highly recommended his special desert, “Helado Tiramisu”. It was Tiramisu wrapped in a sheet of chocolate. It looked pretty interesting so we ordered the special desert! This was the first tiramisu we had in Spain! 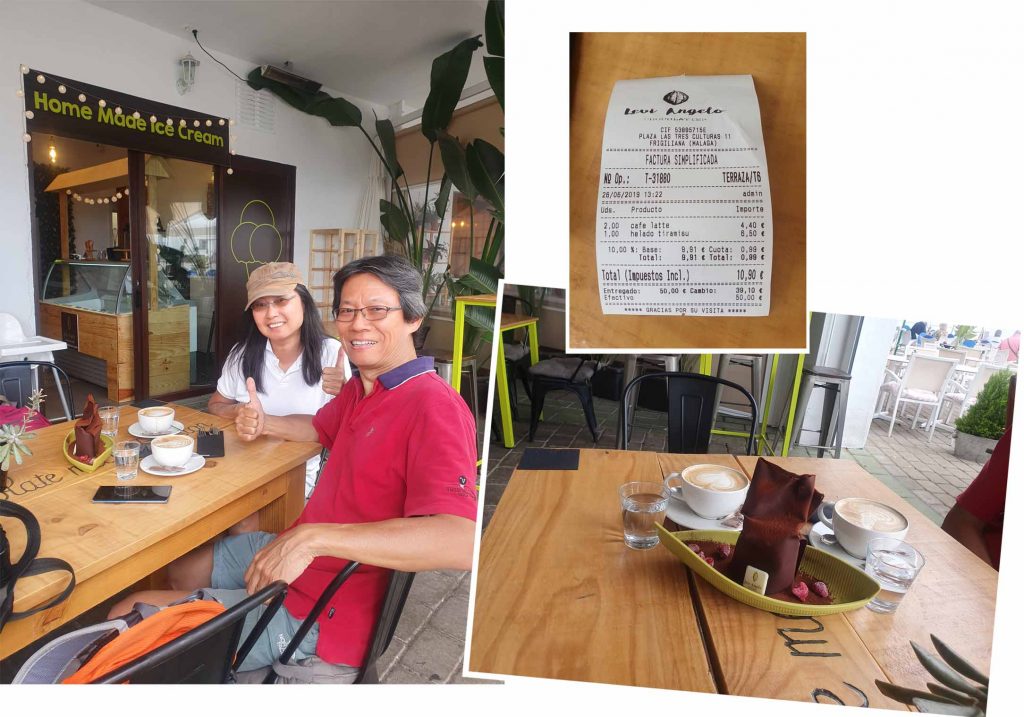 After we check-in to our hotel in the town center we explored the city on foot. We visited the Cathedral of Granada, we saw the beautiful “domed” Parroquia de Santos Justo y Pastor, then we went for dinner at a busy pedestrian street. After dinner we were off to two high viewpoints of Alhambra and then back to Carrera del Darro and finally back to our hotel/stay. On the whole we walked about 6 km exploring Granada town center. 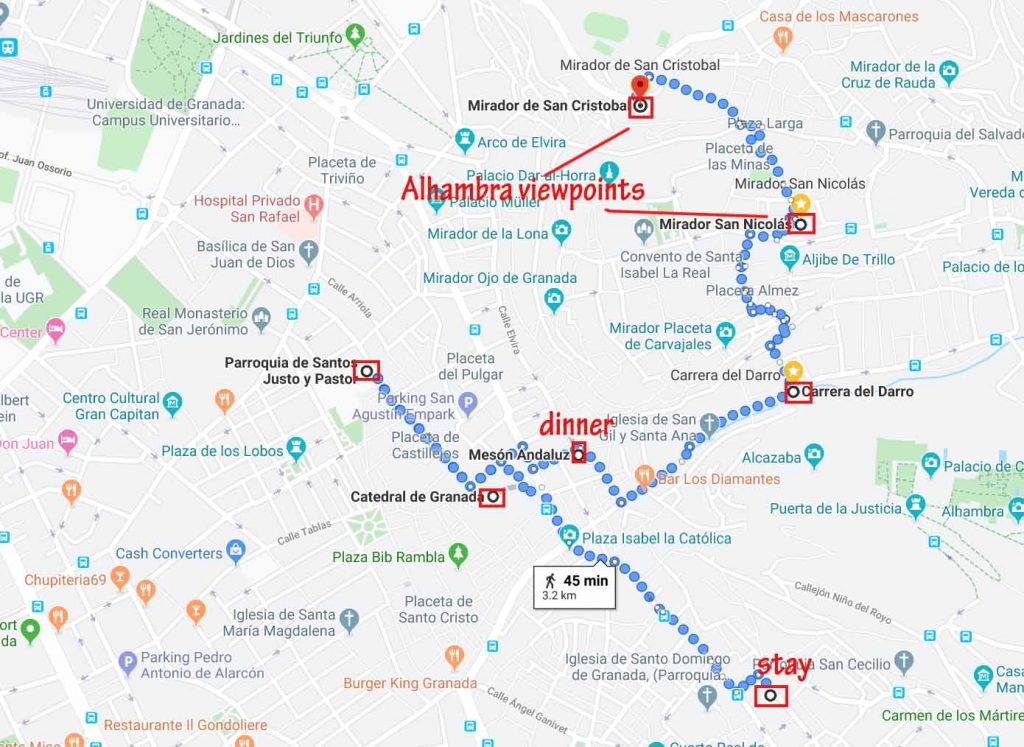 Our first destination was Catedral de Granada, it was about 650 m from our hotel. On the way we passed several vehicular streets and pedestrian streets of Granada town and they were very pretty. We liked the “overhead shades” that were installed “here and there” to cool the place. The streets were clean and the pastel colored buildings were neat and tidy. 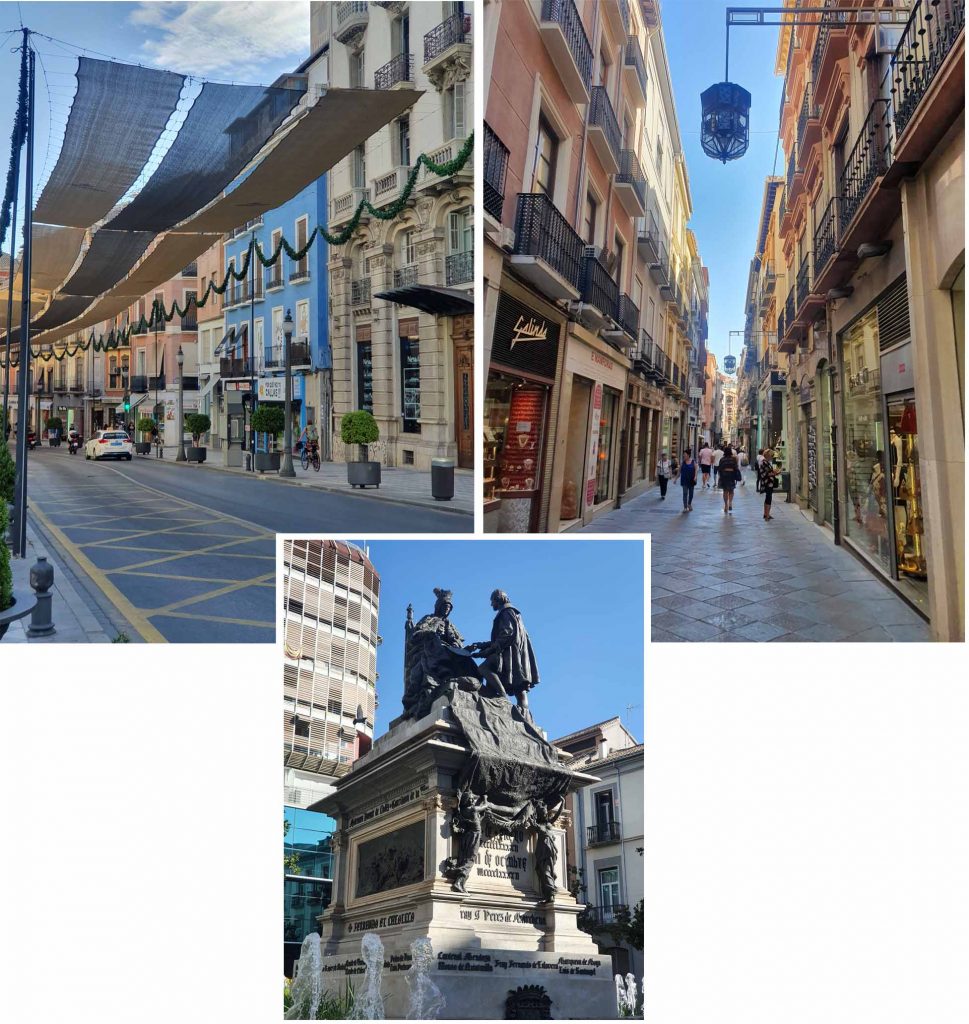 We arrived at the Catedral of Granada which was closely surrounded by other building. At one angle it was a circular building at another side it was a squarish building. Granada Cathedral was built by Queen Isabilla after the conquest of Granada on the site of a Mosque. The first stone of the cathedral was laid in 1523 and it took over 180 years to build. In fact the magnificent cathedral was still not finished as its original plans included two 80 metre towers, only one was built and still remained half-finished. 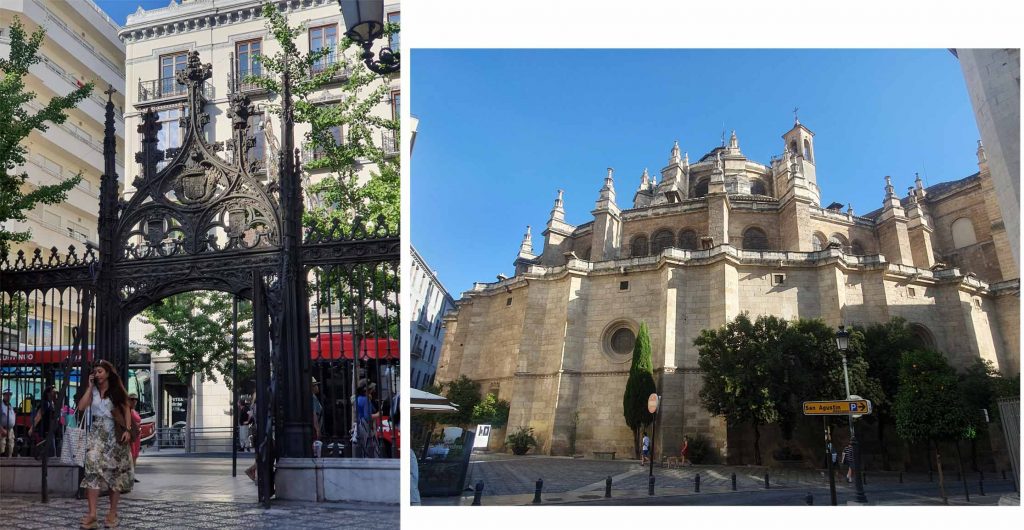 One of the cathedral entrances

The first architect designed the cathedral in Gothic style but the subsequent architects made change to incorporate renaissance style in the cathedral. 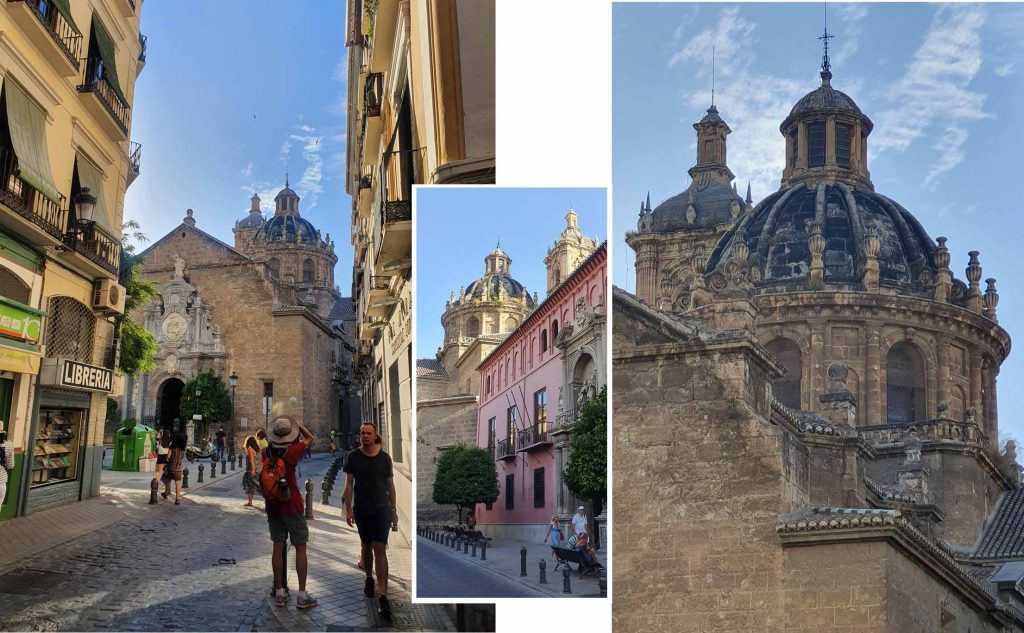 It was 8pm, our usual dinner time, and we were ready for dinner. We stumbled on a couple of adjacent pedestrian streets lined with cafes and restaurants but most seemed not to be serving dinner yet. Everybody were just drinking and eating tapas!  We found a restaurant, “Meson Andaluz” which was okay to serve dinner early. 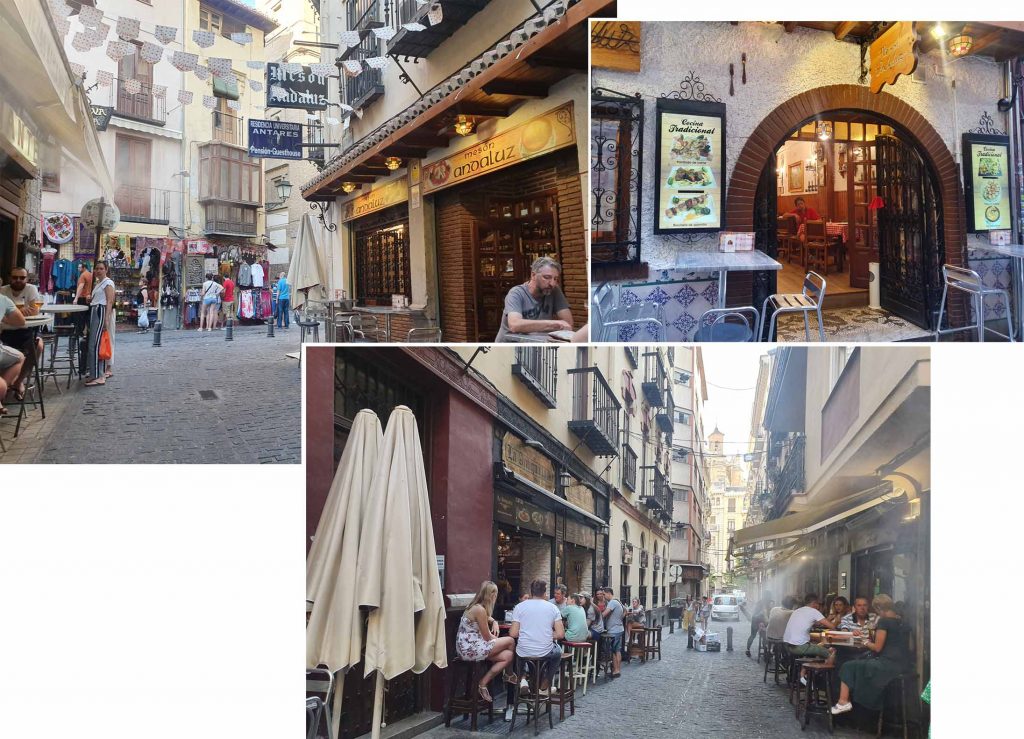 We went into the empty restaurant and ordered a meat plate for two and tea to go along. Dinner was yummy and more than enough for the two of us. The bill came up to €31. 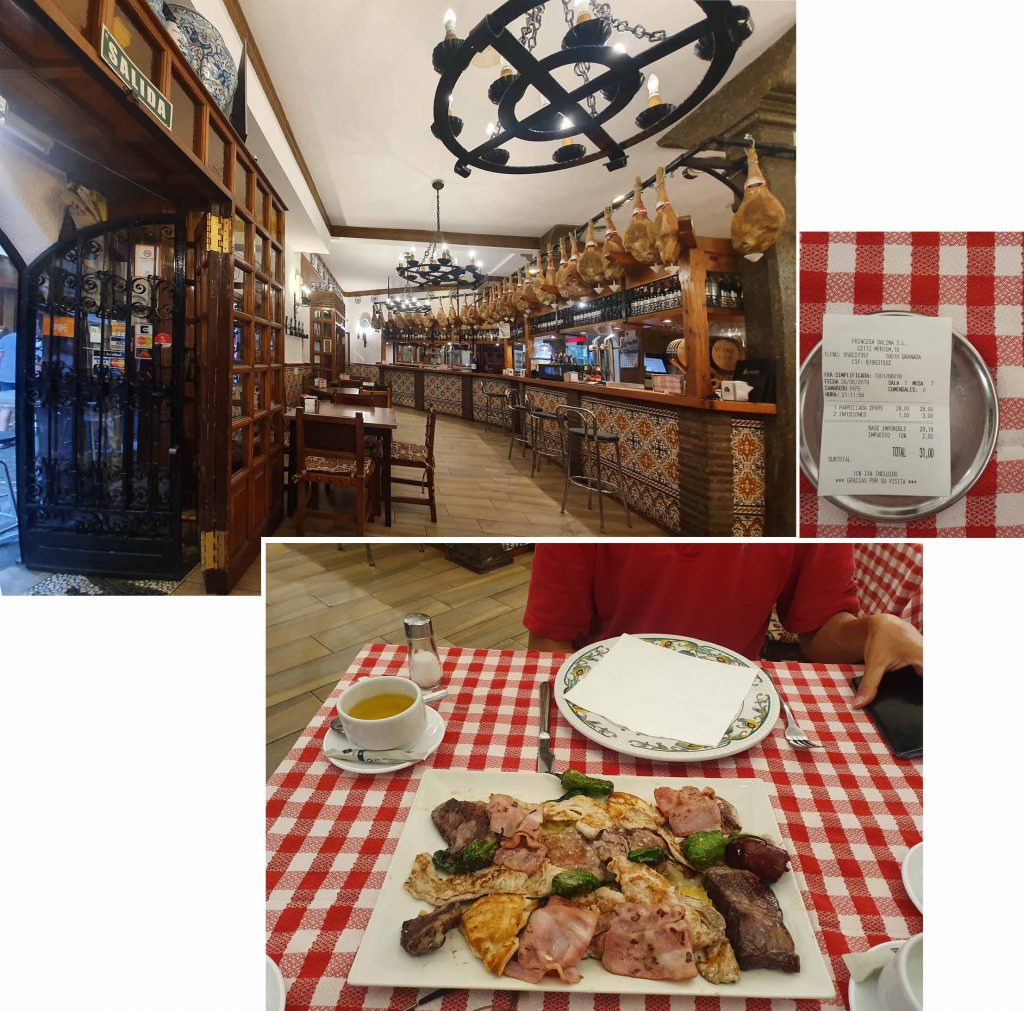 We had to hurry through our meal as we wanted to be at two Miradors to see the sun set over Granada especially over Alhambra.  After dinner we walked to the first mirador it was the Mirador San Nicolas. On the way up we did not see many people but when we arrived at the mirador it was already packed with visitors. 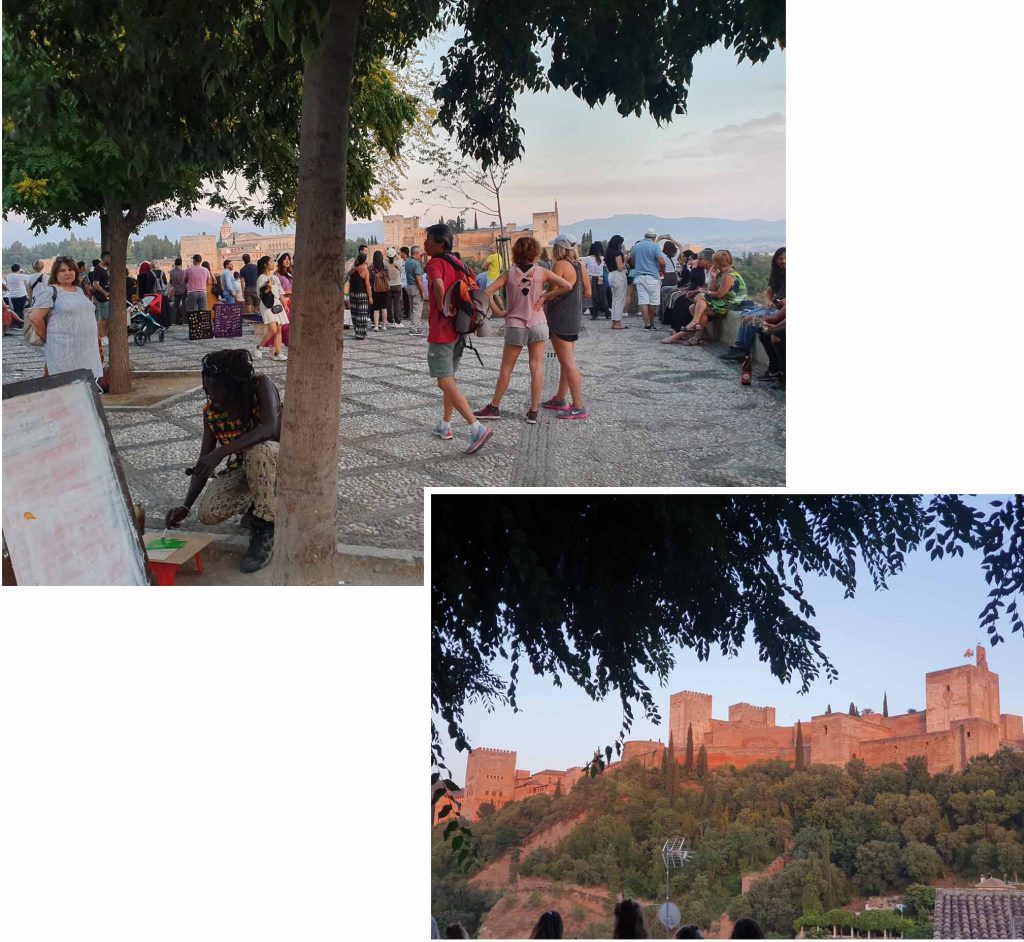 Alhambra looked beautiful especially with its “brick” color turning “red” as the sun set. We did not stay long and moved up to Mirador de San Cristobal. This second mirador was at a higher elevation and had a better view of Granada city and the Alhambra. The place had even more visitors than the lower mirador. 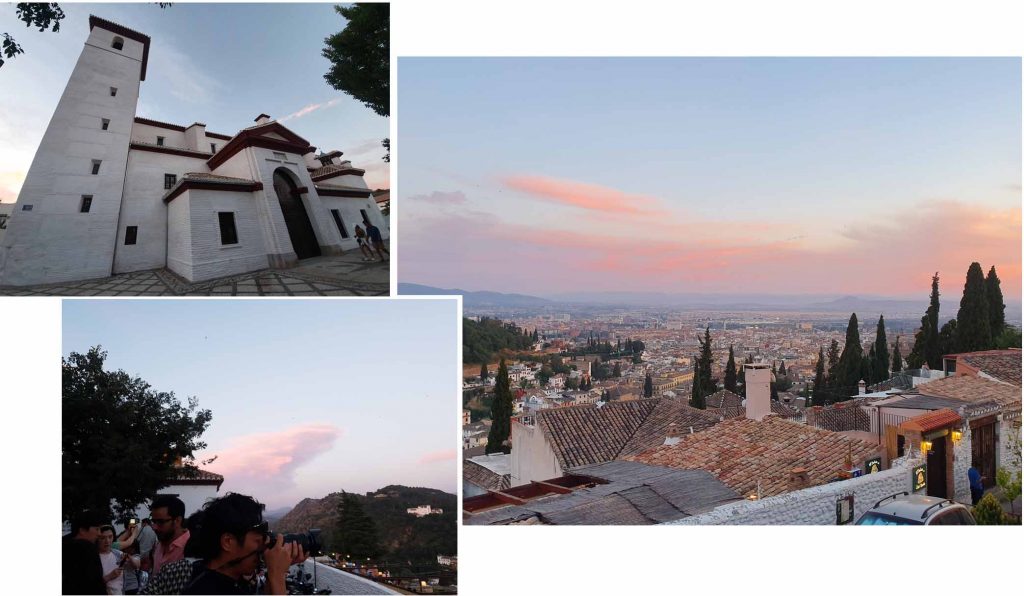 There were so many people at the mirador and it was difficult to find an unblocked view of the Alhambra. It was not easy to squeeze to the front line too. Once we secured a plac  we dared not move away as others would take over once we walked away. We patiently waited for the sun to set and had a wonderful time viewing the changing colors of the sky and the Alhambra over an one hour period. 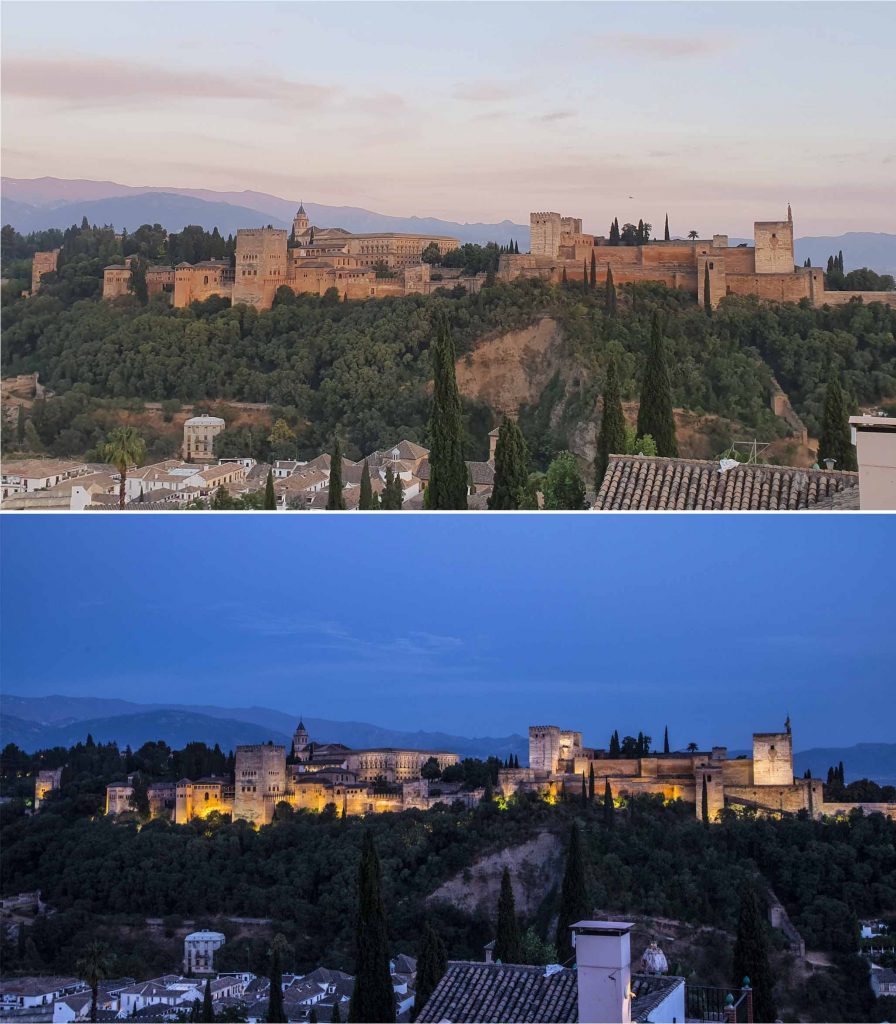 Changing colors of Alhambra of Granada

The Alhambra was an ancient palace, fortress and citadel. This eighth century old site was name for the reddish walls and towers: al-qal’a al-hamra in Arabic means red fort or castle. It was the only surviving palatine city of the Islamic Golden Age and a remnant of Nasdrid Dynasty the last Islamic kingdom in Western Europe.

The Alhambra wasn’t the construction project of a single ruler, but rather the work of successive rulers of the Nasrid dynasty. In 1492 after the ending centuries of Islamic rule and the exiled of the last Nasrid ruler, the Alhambra underwent many changes. Part of the complex was destroyed and rebuilt in Renaissance-style.  In 1812 some of the complex’s towers were blown up by the French during Peninsular War and in the 19th century The Alhambra underwent a series of repairing and restoration efforts. 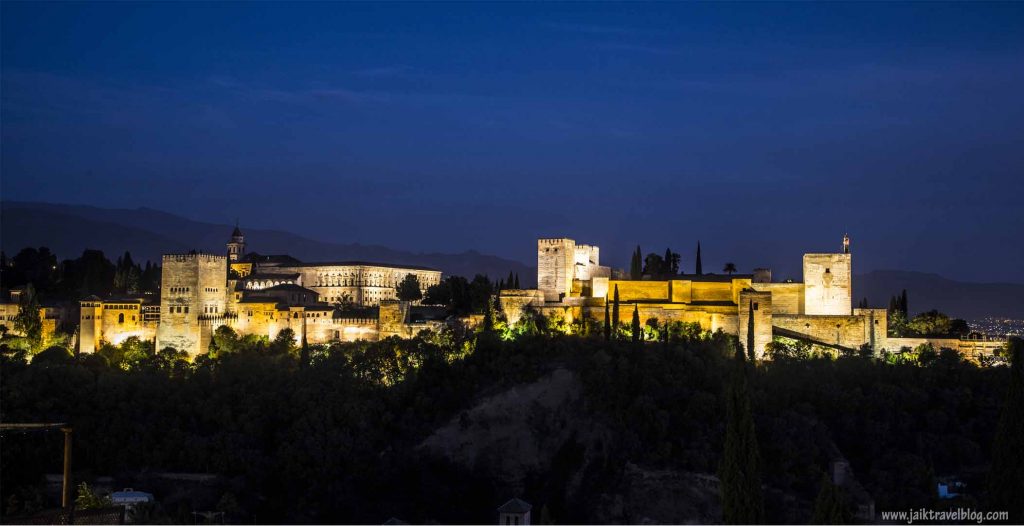 The beautiful Alhambra at night

We made a horrible mistake we did not buy our entrance tickets into Alhambra in advance, we kind of assumed that we would be able to get the tickets on arrival and was shocked when the receptionist at our hotel informed us that tickets were sold out days in advance. We made called to the helplines and emailed to The Alhambra website but there were just no more tickets. We even waited past midnight to check for last minutes release of tickets but there were none. Sad!

We usually did not like to spend time exploring the interior of palaces as most looked alike after we visited several. We thought Alhambra looked different so it was in our itinerary to do a day/evening/night visit of the Alhambra complex. Unfortunately “No tickets”! 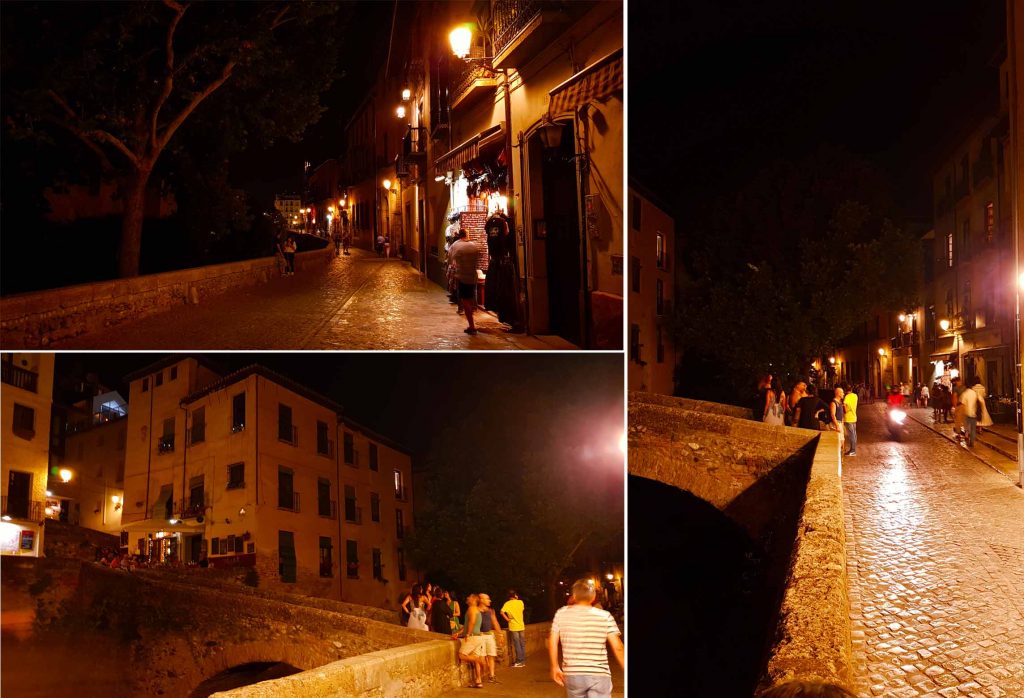 On our way back to our “stay” we walked past Carrera del Darro, which was a popular place in Granada frequented by visitors because of its quaint pedestrian street  and buildings beside a canal. We passed it on our way to the miradors and again after we visited the miradors. We did not find Carrera del Darro especially outstanding. We could have visited it not at its best time.

Our stay was a double room at  Hotel Molinos reserved at  booking.com. The main reason we selected Hotel Molinos was due to its location. It was sited in Granada town center within walking distance to several prominent sites in the town. It was also near to The Alhambra. The cost of the room was €38.40 for a night with breakfast included.

We drove directly to the doorstep of the hotel, there was a hotel parking just outside its door, where we off loaded our bags and carried out our check-in. 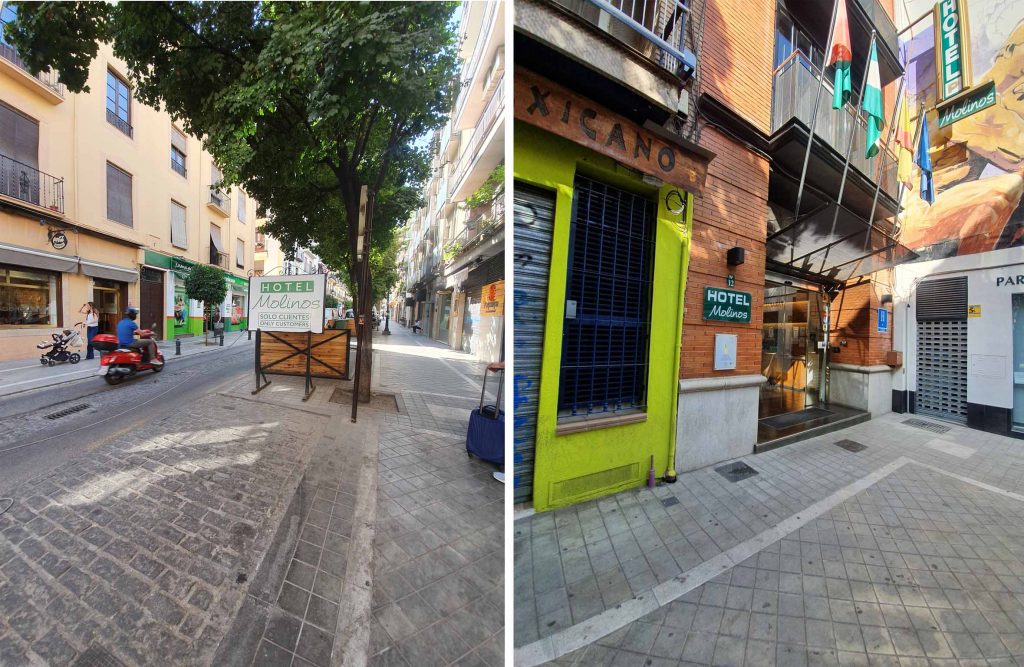 Hotel Molinos and its “short duration” parking outside 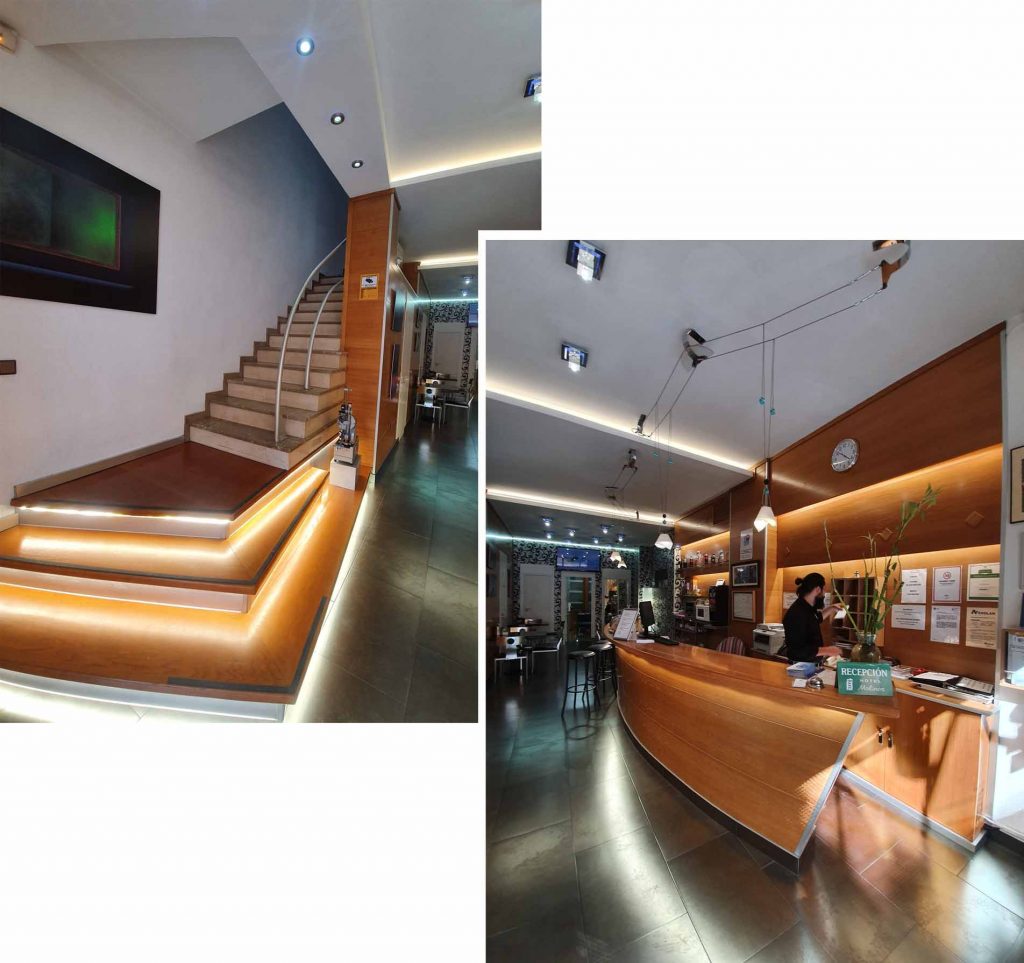 Our room as on the 2nd level, the room was nicely furnished, modern and clean. It was a bit small with not much walking space. The air-con was great. The ensuite toilet was large and clean with shower and bathtub. 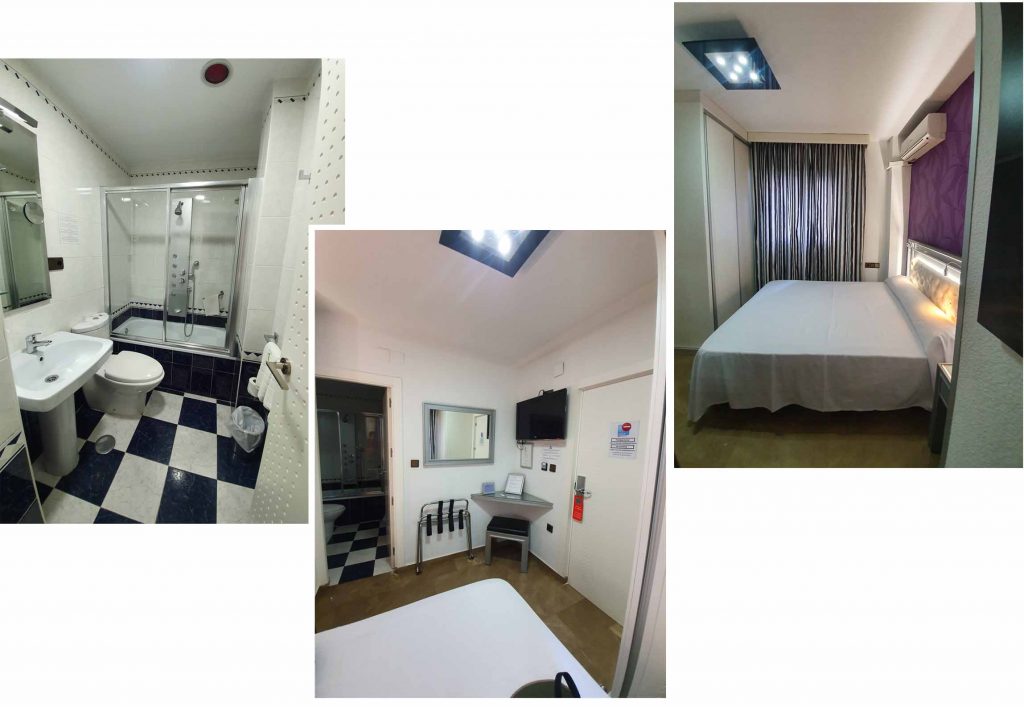 Our double room and ensuite toilet

Th price of the double came with breakfast for two. There was a small dining room at the back of the hotel just after the reception on the 1st level (ground level). In the morning our breakfast was served by the receptionist after he enquired about our choices. Croissant, bread, Jabugo ham (cured ham),  cheese, cafe latte and tea. Nice breakfast and we enjoyed it. 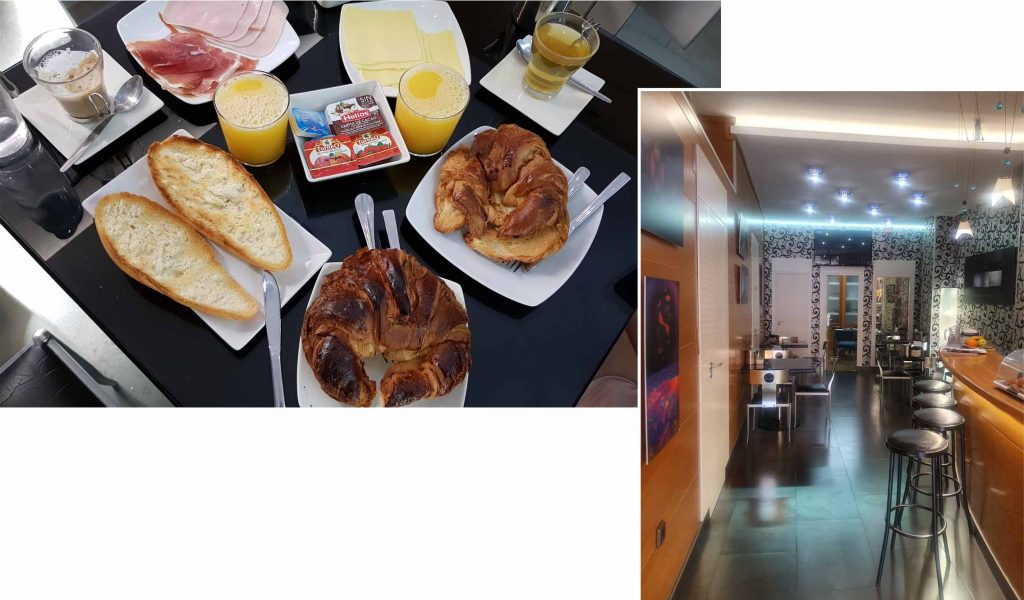 The hotel did not have any onsite parking but it offered parking at a charge of €16.50 a night at a nearby place. The cost of the parking was ridiculously high, it was almost half the price of our room for the night. The hotel receptionist explained that the hotel room was on promotion which explained its “nice” price but the parking belonged to another party and there was no promotion/discount.

She was very nice to provide us a “cheaper” parking alternative nearby. We drove forward for about 350 m on the same road and on the left side was a black gate. Behind the gate was a huge public carpark and it charged €12 for 24hr including overnight parking. 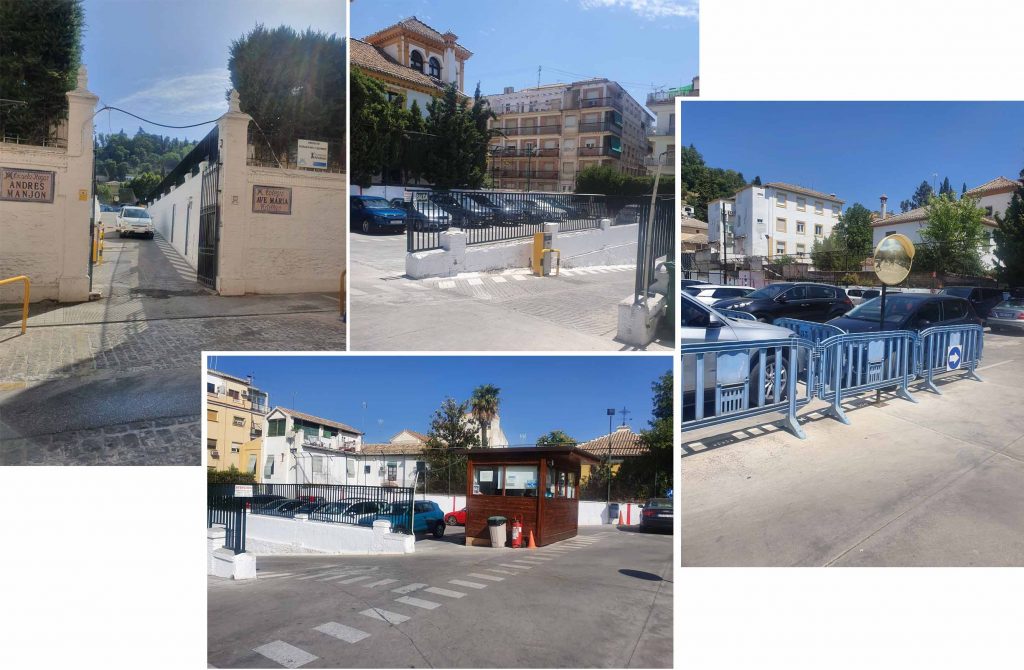 We liked staying at Hotel Molinos, the price was very good and the location was near the town center. We find the room a bit small but for that price we could not complain. Breakfast was good too.