We visited Toledo a beautiful ancient city just an hour drive from Consuegra. It was definitely a city that deserved a one night stay, staying a night gave us the opportunities to experience the old city in both daylight and nightlight.

Our original plan was to stay one night in either Consuegra or Toledo as the two places were just 40 minutes apart. But we knew that both the places would have great night scenery and to experience their night beauty we had to stay nearby so  we ended up staying a night each at Consuegra and Toledo. 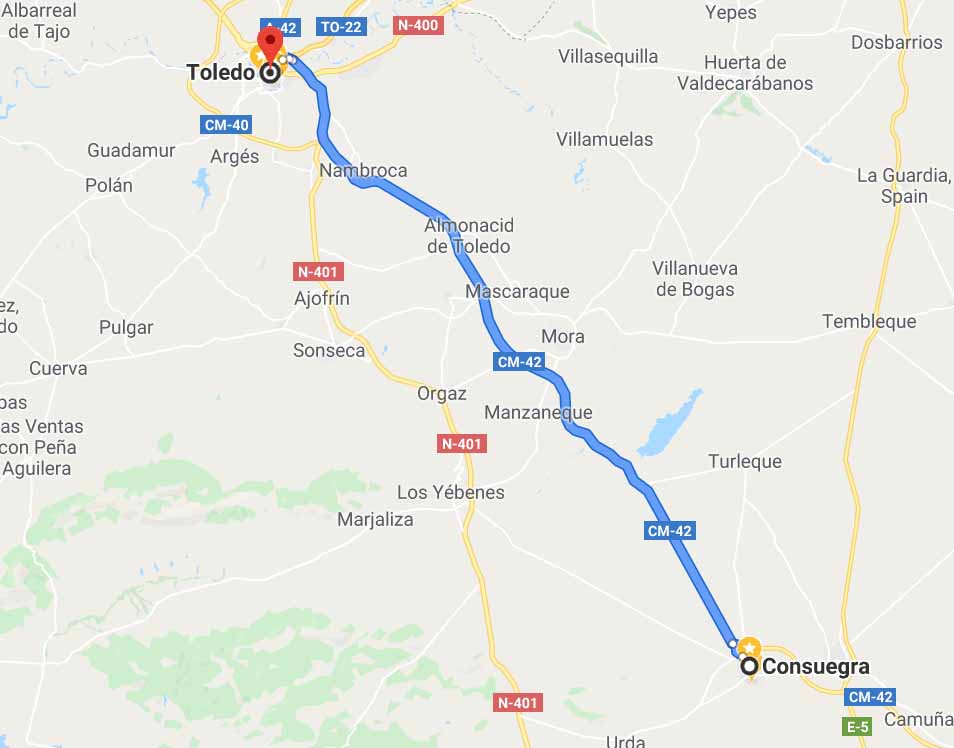 From Consuegra to Toledo

At the mirador there were several parkings (free). It was just a matter of parked and walked a couple of steps and “voilah” a fantastic sight to behold. A magnificent ancient city surrounded by a river! 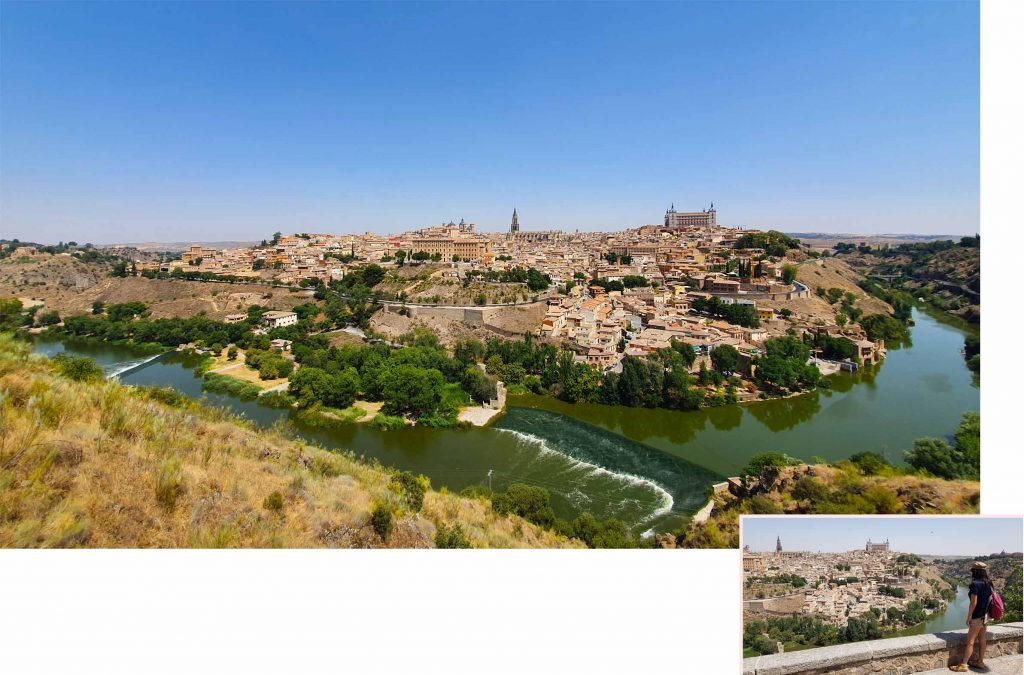 Toledo Ancient City across the river

Toledo was a World Heritage Site declared by UNESCO in 1986. It was famous for its extensive monumental and cultural heritage. It was an imperial city as it was the main venue of the court of Charles V, Holy Roman Emperor. 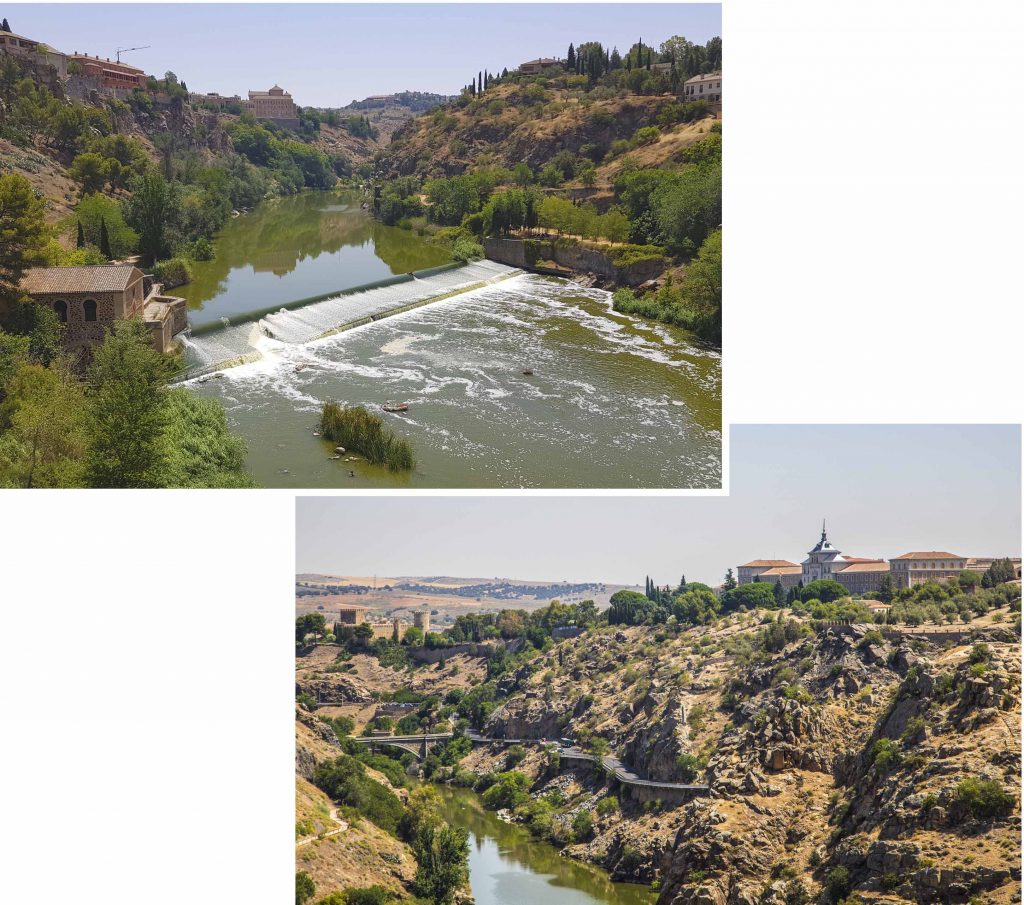 River Tagus at the edge of Toledo old townIf would have been great to stay at hotel “Parador de Toledo”  that overlooked the old city, it  was just on a hill behind the mirador and staying at “Parador de Toledo” would mean we would be able to enjoy the view through different parts of the day . Unfortunately the cost was  of a room was twice as much as that of an apartment we had booked in the ancient city. So “Parador de Toledo” was a “no no” for us.

With our own car it was  easy to return to the Mirador de Valle in the evening after dinner for the setting sun set scenery. We were back from 8.30 to 11.30 pm to enjoy the sights. 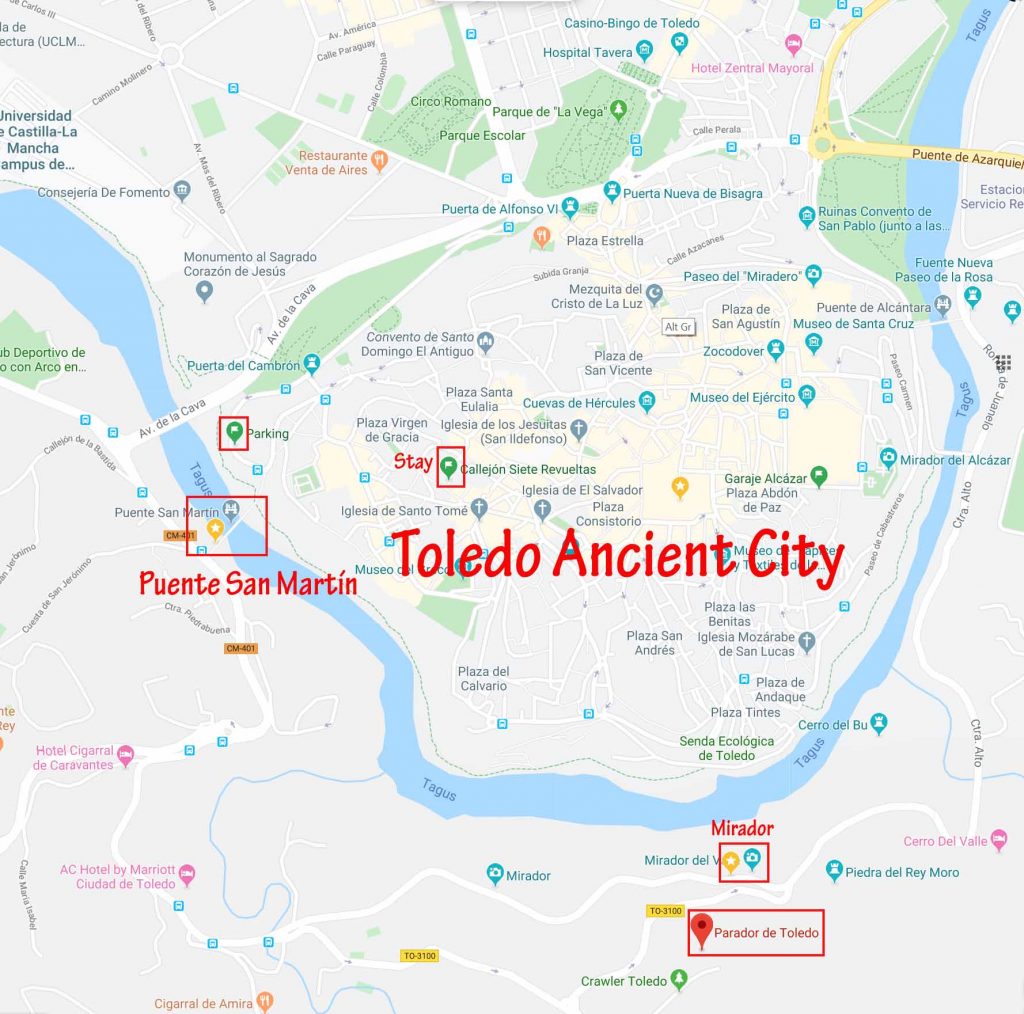 Toledo Ancient City and its miradors

From the Mirador del Valle we drove forword and soon an old bridge, “Puente San Martin” came to view. Again we easily found a place to park our car and came out to explore the beautiful bridge. The ancient bridge (not for vehicle) was sited on the west of the ancient city. It was built in the Middle Ages and was part of the city’s medieval heritage. On each end of the bridge was a fortified tower. 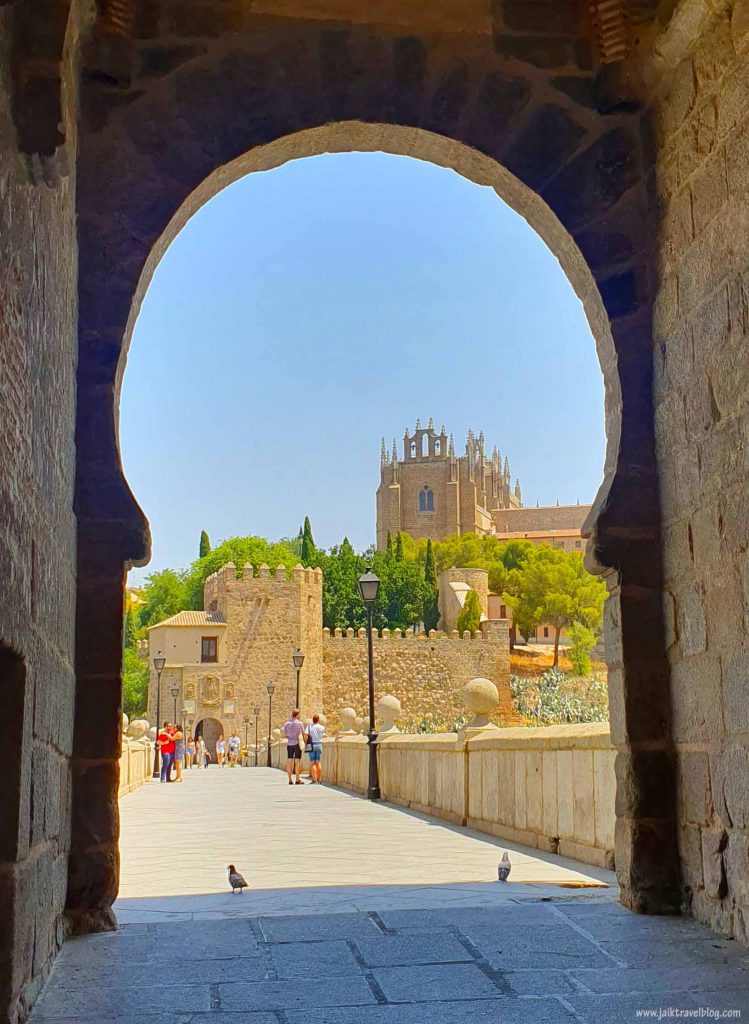 After the ancient bridge we drove a short distance to another vehicular bridge that brought us into the ancient village.  We found parking for our car, grabbed our bags, walked to our stay and checked in. We spent the afternoon roaming the ancient city and after dinner returned to view the ancient city again from across the river Tagus. The second visit to Mirador de Valle was worth all the effort as the view was spectacular! 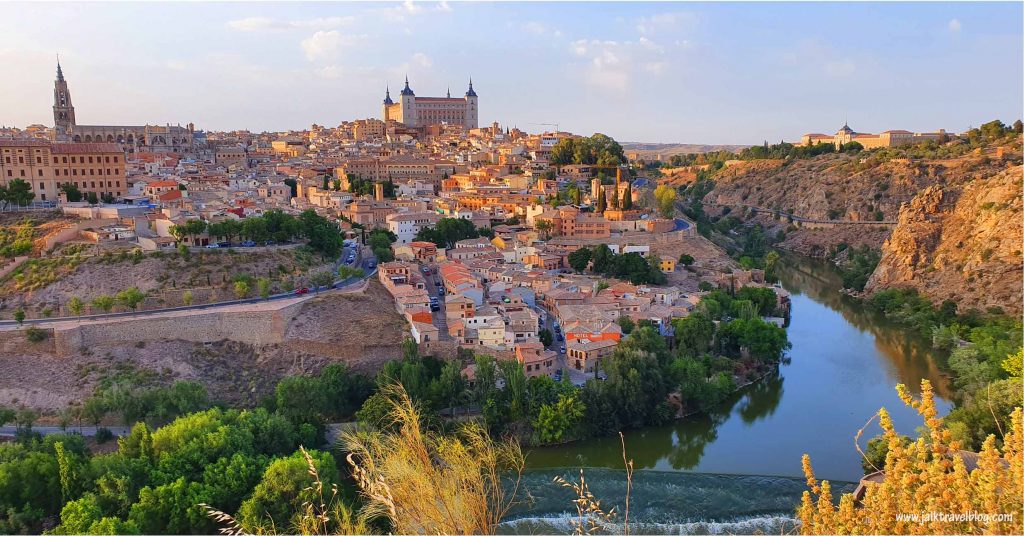 The rays of the setting sun had “golden up” the buildings in the ancient city. After the sun went over the horizon came the gorgeous changing colors of the sky. At about the same time the city lights slowly came on and gave each building another different golden glow. It was a lovely sight. 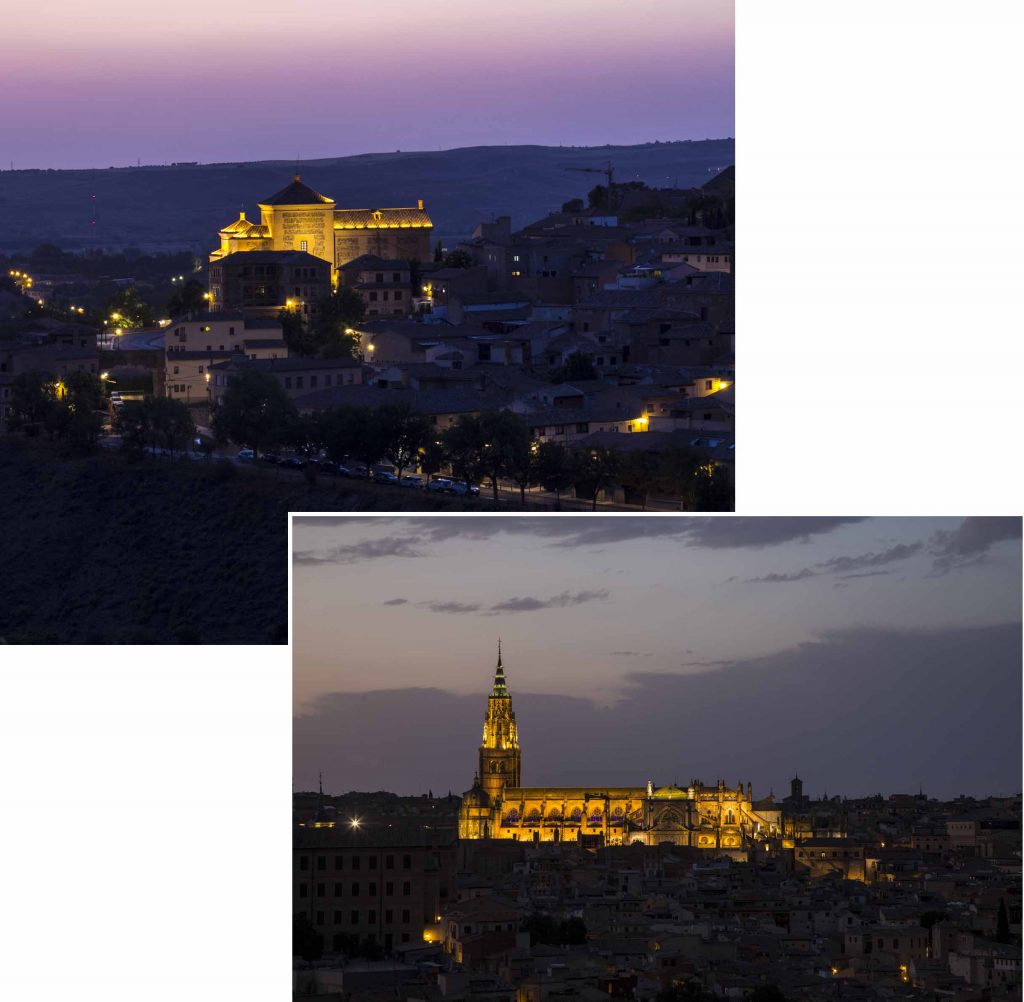 We had visited the ancient city a few hours ago walking the narrow cobbled streets and viewing the majestic buildings up close. The “close-up” views and experience of the ancient city was totally different from viewing it from afar, across River Tagus. From far one could view practically the entire ancient city, the different height of its buildings and their geometry. One could almost feel the greatness of this ancient city in its prime. 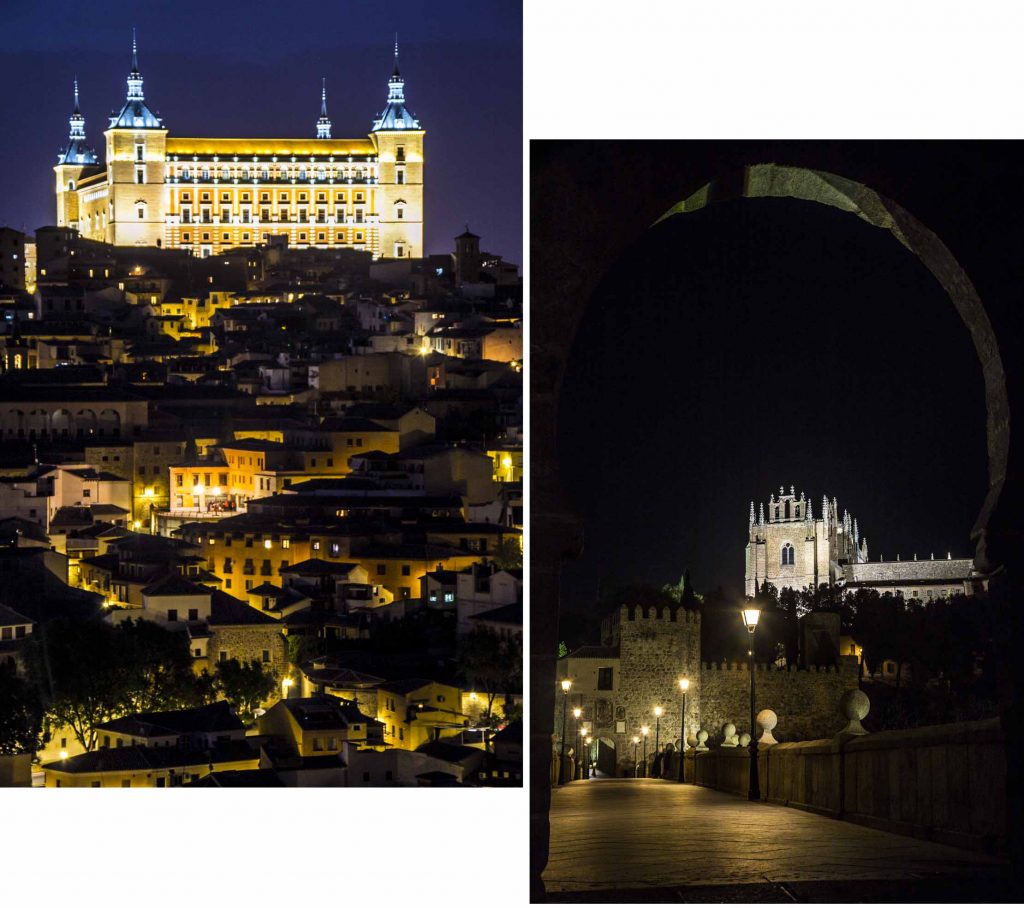 Our stay was in the ancient city. After we checked in and rested we walked out to explore the town. The streets were cobbled and narrow. There was very limited parkings and only available to residents (painted green). It was very much a “concrete/stone jungle” with not much greenery in the city but still managed to look quaint and charming. 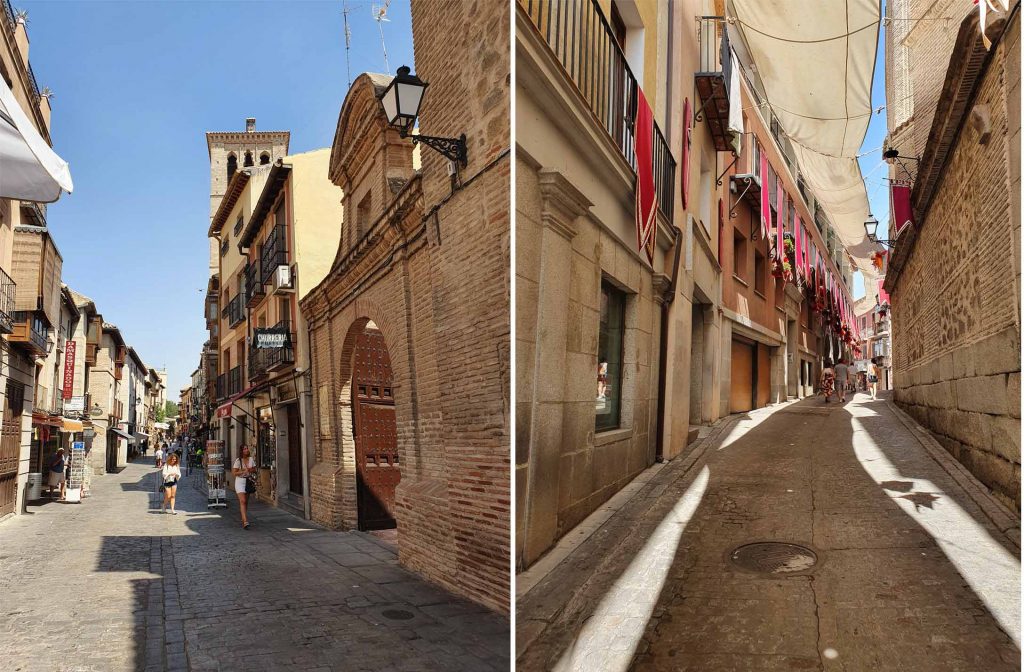 The town was smaller than we had expected, it did not take us long to walk from the parking to our “stay”, from our “stay” to Cathedral of Toledo to Alcazar of Toledo. It was just a 1.7 km stretch and that practically went from the west side to the east. 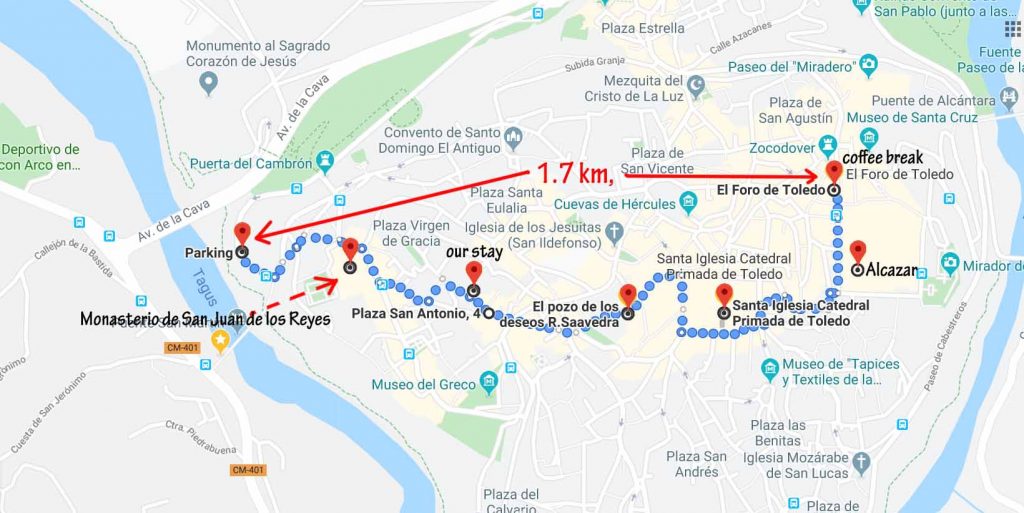 Our walk route in the Toledo ancient town

The buildings were close to each other, there was not much space to step backward and looked up at the building as a whole. Toledo had changed hands many times over the centuries, it was set up by the Roman and taken over by the Visigothic Kingom (Catholic) years later. It then went into a decline and was later conquered by the Muslim. After the collapse of the caliphate it became the capital of independent Arab small kingdom. Toledo was also once a centre of learning and arts in Spain.

Our walk brought us to Alcazar of Toledo a huge “blockish” building. 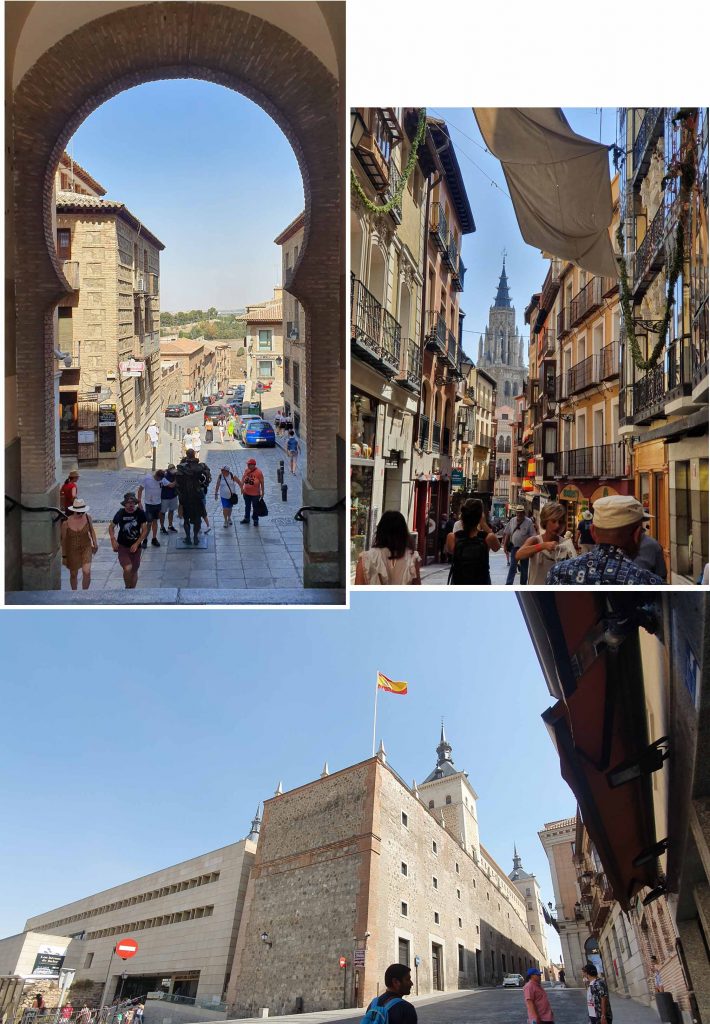 The fascinating streets of Toledo and Alcazar

The Alcazar had four towers with blue roofs and were located at the four corners of the rectangular structure. Sad to say that at close range it did not look as magnificent as it seemed when view from the mirador across River Tagus.

After Alcazar we went for a coffee break. We found, “El Foro Cafe Bar” at the corner of Plaza Zocodover. It had both outdoor and indoor sitting areas and two different menu prices! For the same items the prices were higher when the patrons sat in the outdoor table. Well indoor sitting was just great for us! We came from a perpectually hot weather country and loved the cool air-conditioned cafe on a hot day!! 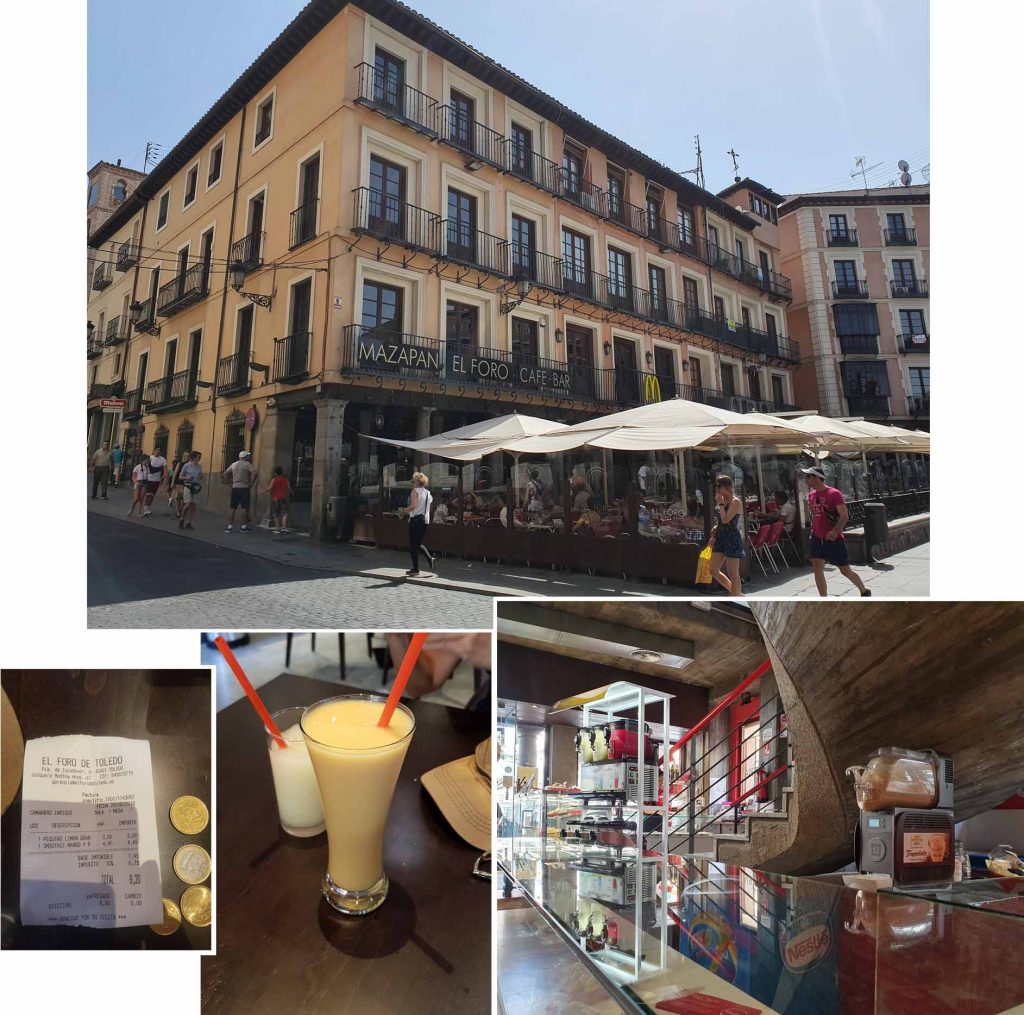 Our stay was an apartment that I had booked on Airbnb. It was “Duplex Coqueto Y Acogedor” a studio in the ancient city. I booked it because it was a “value for money place”. It was an entire apartment for €65 a night. Usually I would not book on Airbnb until I found no better alternative. My “stay” selection criteria were mainly location and price and we usually used booking.com because of it provided more cancellation flexibility.

New comers to Airbnb had a huge advantage, if they registered on Airbnb based on invitation, they would get a substantial credit which could be used to offset the cost of their first booking! We gladly gave out our “Airbnb Invitation” to whoever that would like to have it.

There was definitely no parking onsite. Lucky for us we found paid parking (39.85if 7986, -4.034063) near the bridge of Saint Martin (Puente San Martin) and Monasterio de San Juan de los Reyes. It was parking by the side of the road. Though it was paid parking we did not pay much at all. All in we paid for less than €1 during our stay at Toledo. Most paid parkings on the street had certain stretch of timing that was free and overnight parking was free too. 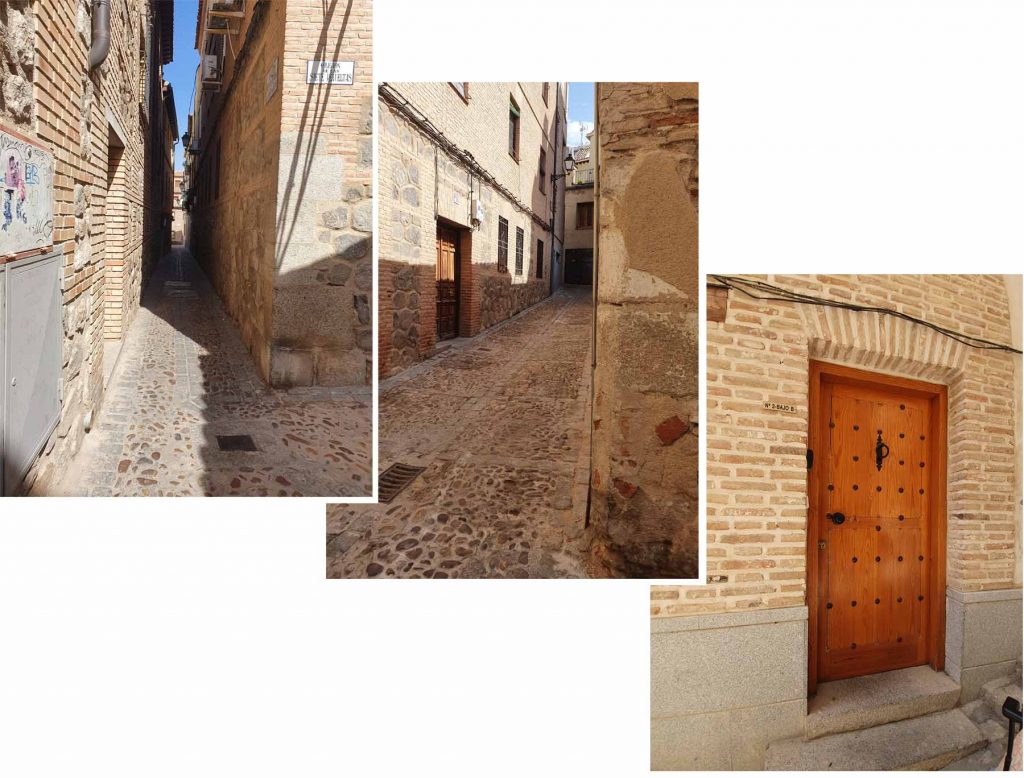 Not so comfortable walk to our stay

The parking was about 500 m to our stay. Though it was a short walk it was a tough uphill trek and dragging our cabin size luggage on the cobble stone streets was no easy feat. It was a hot day so we were so glad to let ourselves into a cool apartment (self check-in). The apartment was at the end of a dead end street and had two levels. The living, dining and kitchen was on the ground level. It was large and clean and COOL. 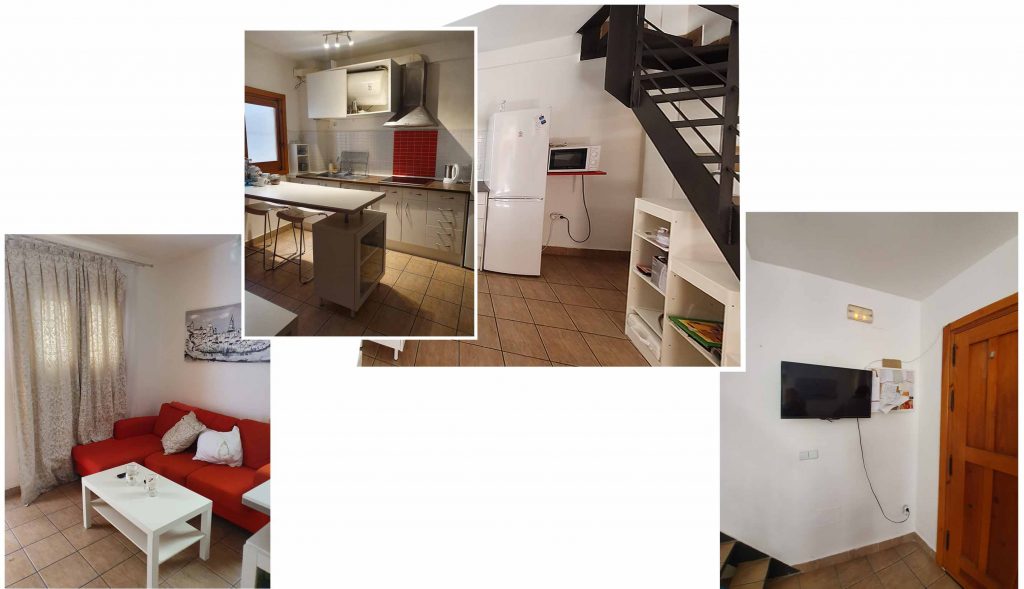 Living, dining and kitchen of our apartment

Going up the stair to the next level was a big bedroom and a toilet. Nice, we like this apartment very much. 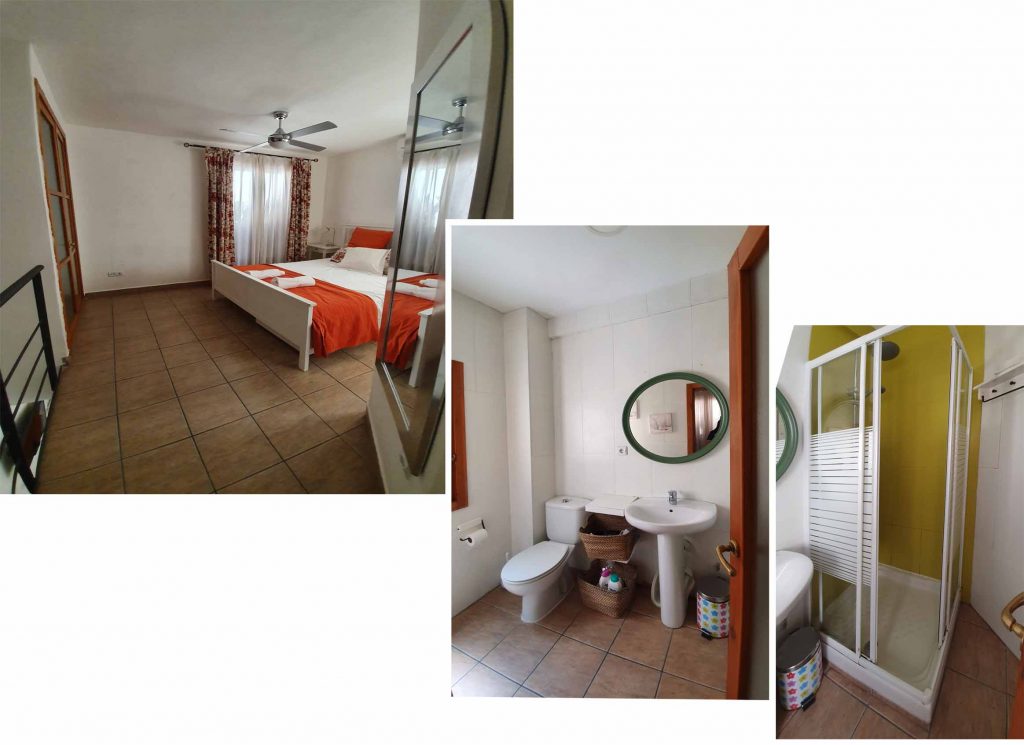 Bedroom and toilet on the upper level

At our stay we made full use of its kitchen and cooked two delicious pasta meals with plentiful of cheese! Lucky for us we were very “cheesy” people. We loved cheese, loved salad with simple vinaigrette dressing, loved cherry and strawberry. So whenever we were in Europe it was easy and inexpensive to go grocery shopping, cooked and ate the food we liked. 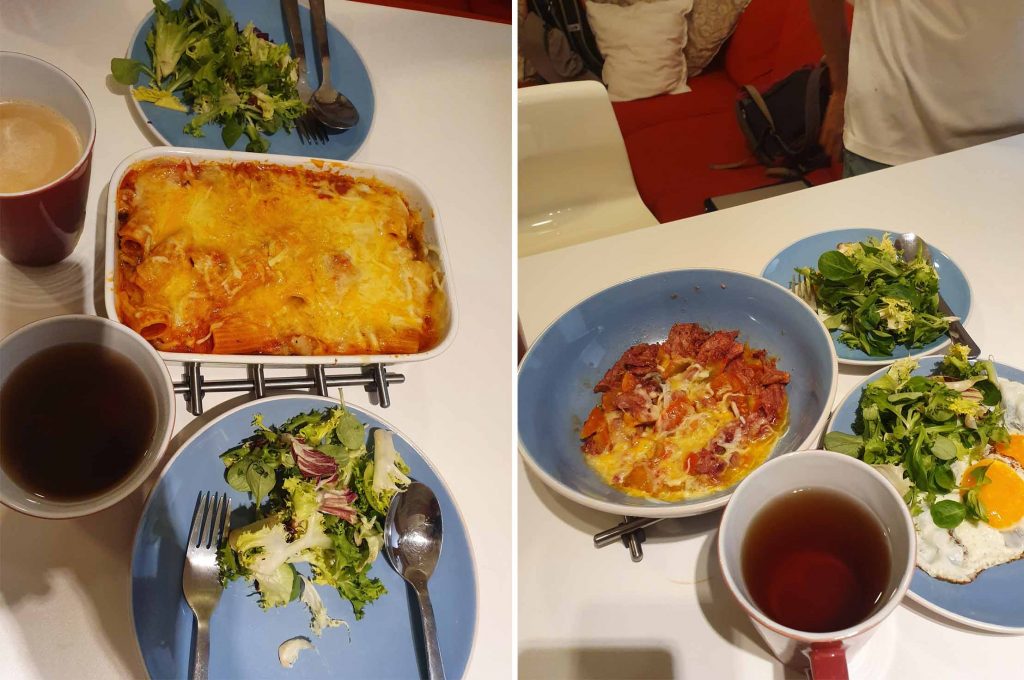