We had two nights in Madrid and we stayed in an apartment in Madrid Centro. From Toledo to Madrid was an hour drive. We knew that Madrid Centro had restricted entry non-resident cars so we were very carefull not to drive into the restricted zone. 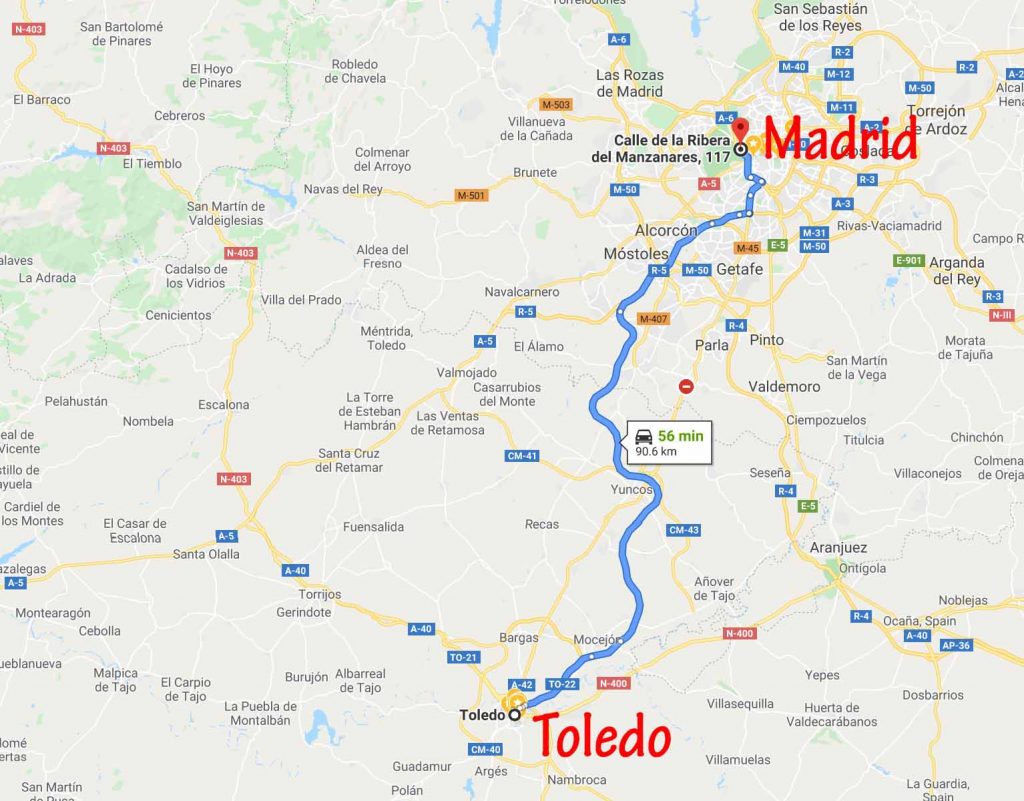 Route from Toledo to Madrid Centro

Madrid centro district was the oldest part of Madrid. It was packed with beautiful and majestic buildings at every corners. It had palaces, cathedral, churches etc etc like every other prominent European city. After visiting many European cities all these palaces, cathedrals, churches, fortress began to look alike. To us Madrid Centro was another “familiar looking” city, we stopped by to relax and to enjoy urban life. We took it easy as the weather was too hot to be out and about in the day time, at about 5 pm when the weather was more bearable we went out to explore the city and stay out till near midnight.

In November 2018, Madrid centro was made “off limit” to non residents’ cars.  If we booked our “stay” outside the centro, parking for our car would not be a problem but to visit all the important attractions would need “bus-ing” and long walk. We felt that staying in the centro would definitely be more convenient,

So after many rounds of searching we managed to find an accommodation in Madrid Centro about 650 m from a parking garage at the fringe of the centro boundary. The parking fee was also reasonable at €12.50 for every 24 hr. 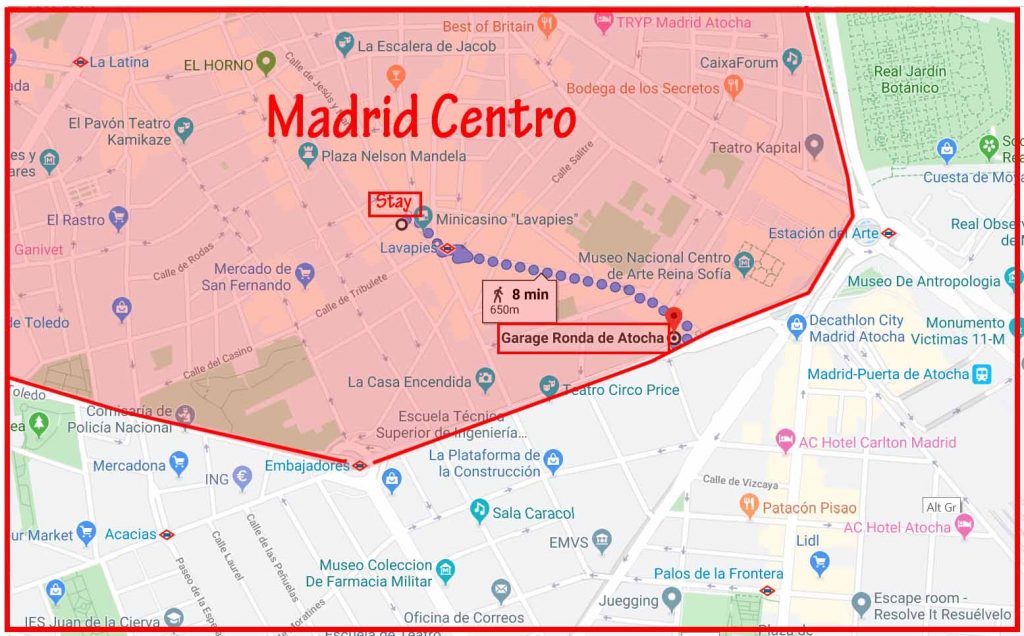 Parking and walking to our stay

We booked our parking space at Garage Ronda de Atocha on its online website (https://www.parkapp.com/parkings/Madrid). This carpark did not accept walk-in parking so we had to book and pay for a parking space on its online website. On arriving at the carpark we found that it was Sixt Car Rental outlet. For a while we thought we drove into the wrong entrance, but according to the location detail on the website we were definitely at the right place. We explained to the attendant that we had a parking reservation and he “Sixt” attendant directed us into the interior of the carpark,  we had to navigate our way down two levels to park our car. 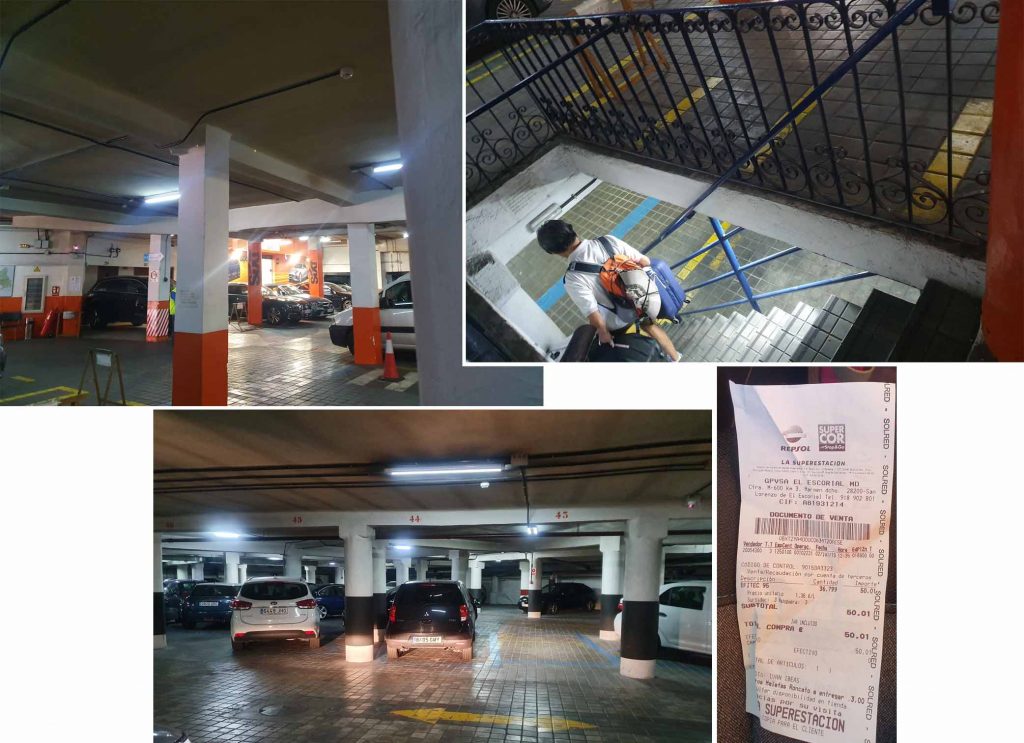 One of our first sightseeing in Madrid was the Catedral de La Almudena. We wanted to take a nice shot of the Cathedral which we believed would look great with River Manzanares as it  foreground. We parked along a road by the river (co-ordinates: 40.427758, -3.731151) and walked across a bridge that spanned the river. In the mid part of the bridge we could see the cathedral far far away. 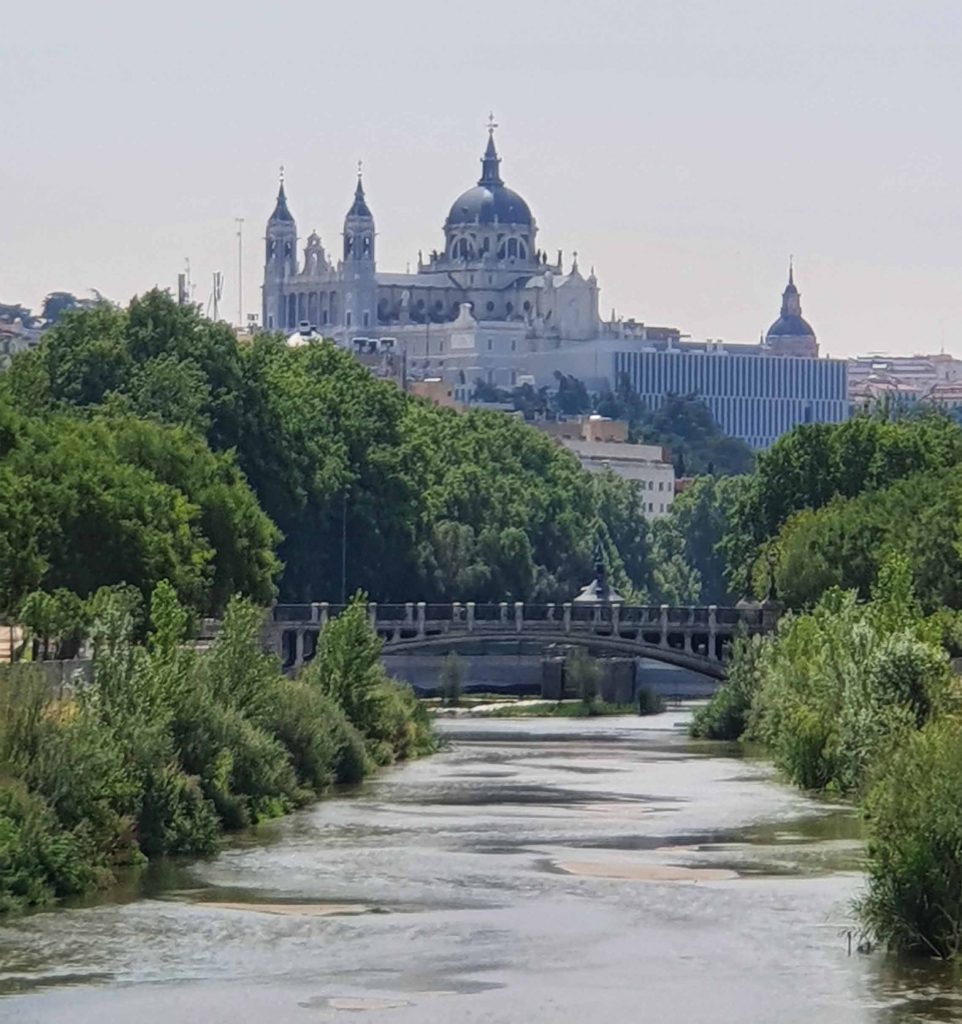 Our first visit to the bridge was in the afternoon at about 12.30 pm. An hour later we checked into our “stay”. It was such a hot day so we hid in our appartment till the weather turned cooler. After dinner we went to visit  Buen Retiro Park (one of the largest parks in Madrid) and from there we took a bus the “bridge” again. 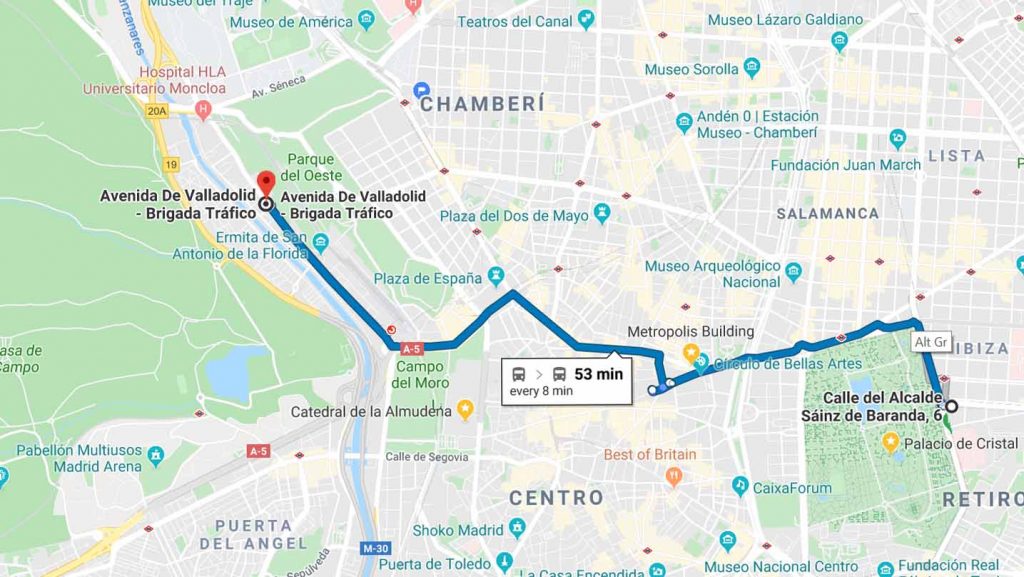 Buen Retiro Park to the “bridge”

We used “google map” to guide us back to the “bridge”. Once we “dotted” our location and and the “bridge” destination,  google mapped the route for us. It guided us to the first bus stop, gave us the arriving time of bus 20, listed the stops along the route, indicated the stop to alight, and again where to board the second bus (bus 46), the number of stops and the final bus stop etc. 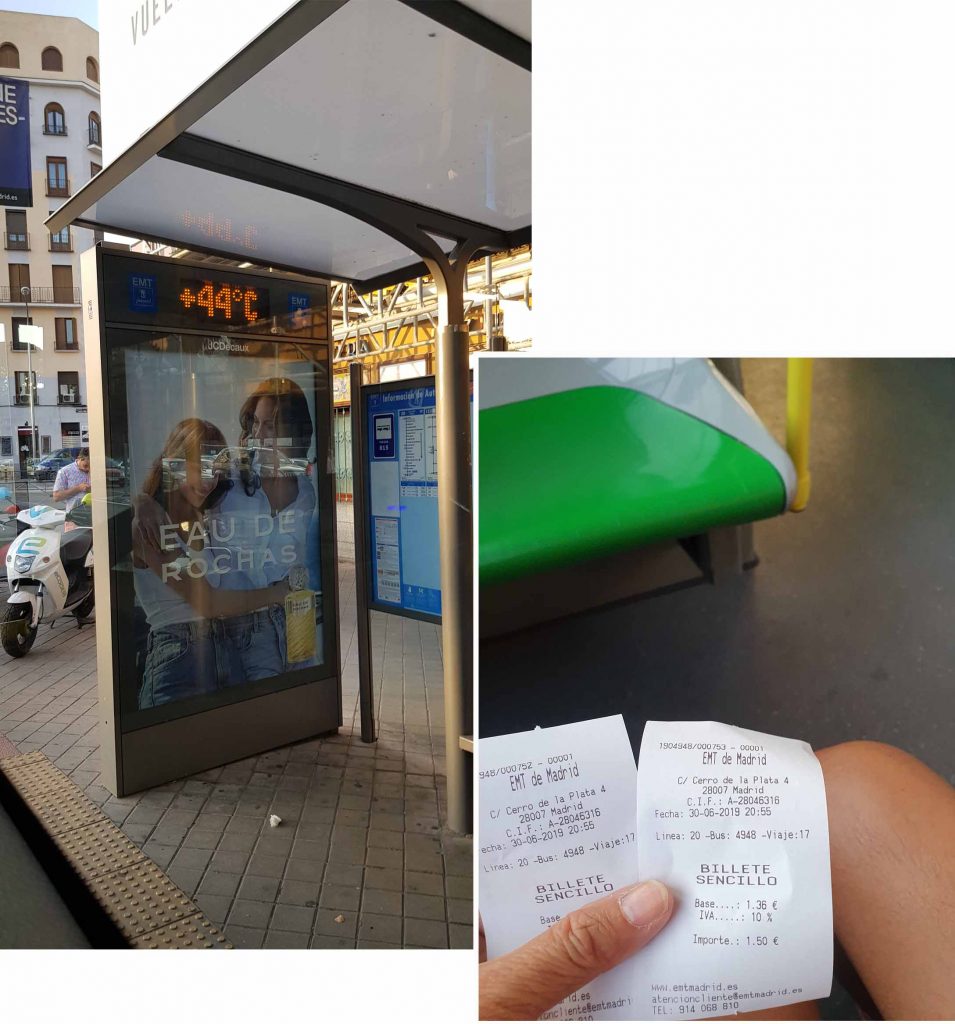 Soaring heat in Madrid in Summer

We exited Parque de El Retiro and followed the google map route to get to the bus stop. At the bus stop was a huge electronic display of the current temperature, it was 44°C! Incredible! We knew it was hot but 44°C was unbelievable.

Each bus each trip was €1.50, so we got out the exact amount and paid the bus driver for our tickets on the bus. The was also a 10-trip ticket for €12.20 but since we were not going to take that many trips, getting a contactless card (€2.50) and loaded it with the 10-trip ticket was not cost efficient for us.

We reached the “bridge” at about 9.30 pm and the sky was still bright. At 10 pm the sky dimmed and the lights of the cathedral came on. A lovely sights. 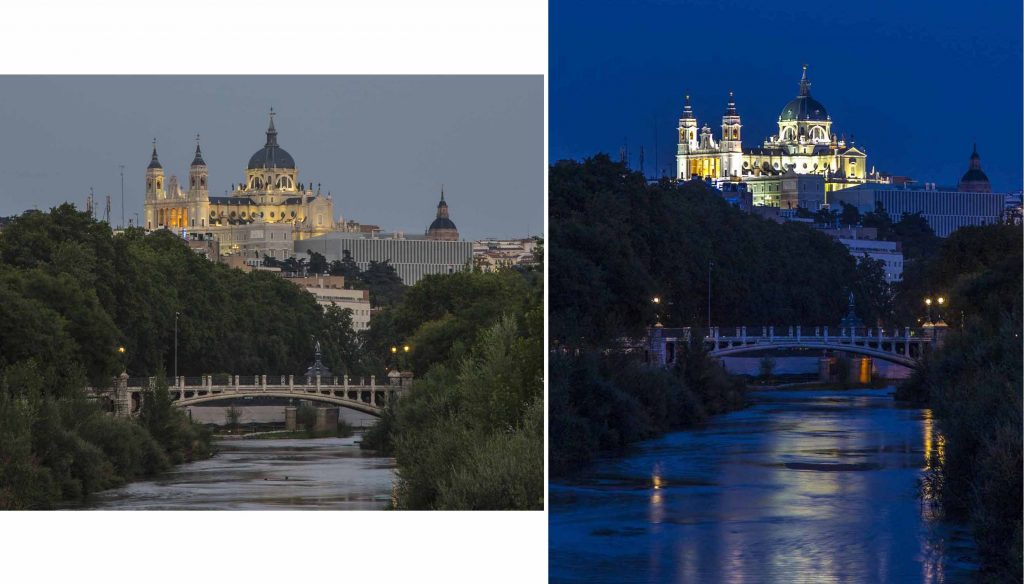 Like many grand catedral, Catedral de la Almudena  took many years to complete.  The first plans were drawn up by Francisco de Cubas in 1879. It was supposed to be a Pantheon for the late Queen Maria de la Mercedes. The foundation stone was laid in 1883 later the plan for a church was changed to a cathedral. Construction was suspended  during the civil  war and after the war the construction resumed with limited resources in 1939. It cathedral was finally completed in 1993! One hundred and ten years from laying foundation stone to completion, definitely more than one life time!

Palacio de Cristal was located in  Parque de El Retiro, the park was located behind the Botanical Garden of Madrid. Entry into the park was free. The “Crystal Palace”  sited in the middle of the huge park looked very beautiful from far and near.

The Palacio de Cristal or “Crystal Palace” was a conservatory. It was built in 1887 and had the shape of a Greek cross. It was made entirely of glass set in an iron framework on a brick base. It was 22 m high measured from base to its cupola. 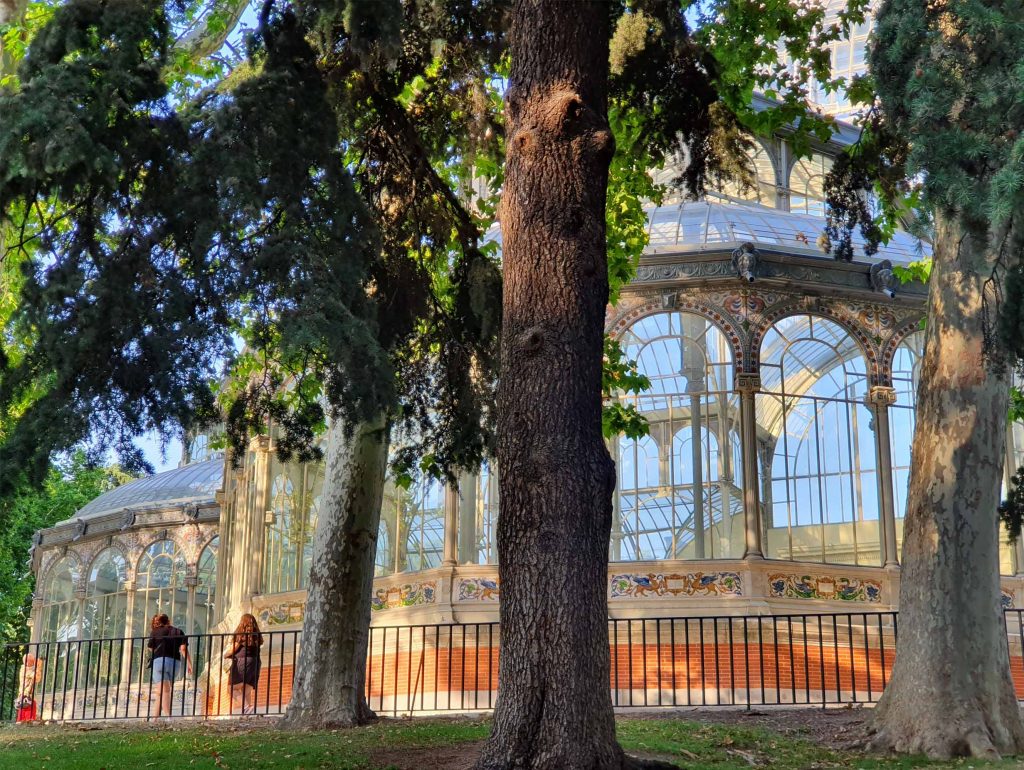 The palace was currently used as a place for art exhibits and entry into the crystal palace was free. We walked into the “palace” and was supprised that it was rather hot indoor. All the glass panels were letting in the light and heat and trapping them inside. We saw a couple of white exhibits and left soon as the heat was getting uncomfortable. 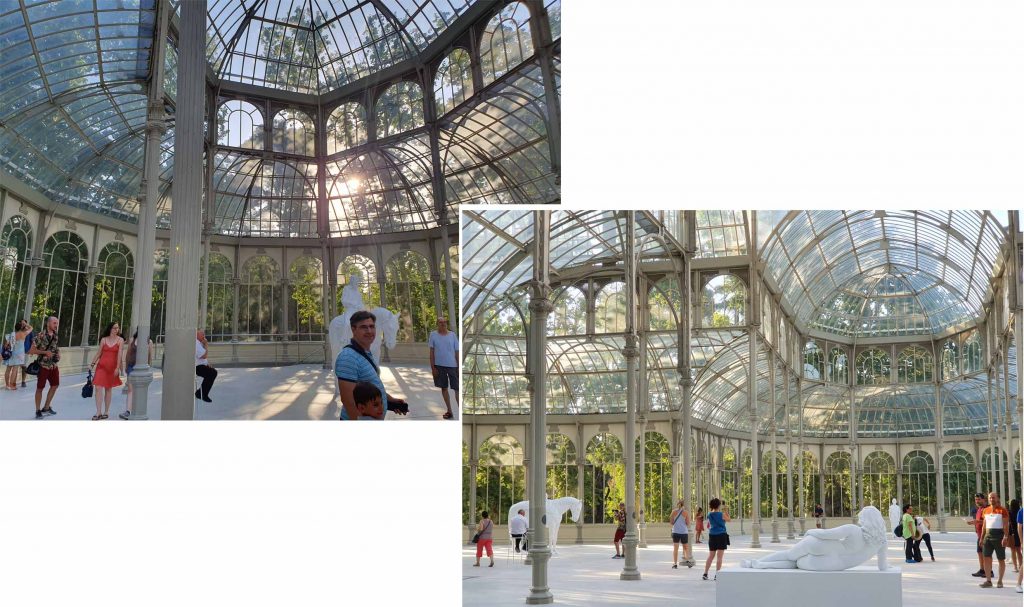 The structure of the “Crystal Palace” was designed in a way that would allow it to be re-assembled at another site.  It was nice that it was never moved and still sat on its original site by a lake. Beside the “Crystal Palace” there was no other interesting “stuff” in the park. 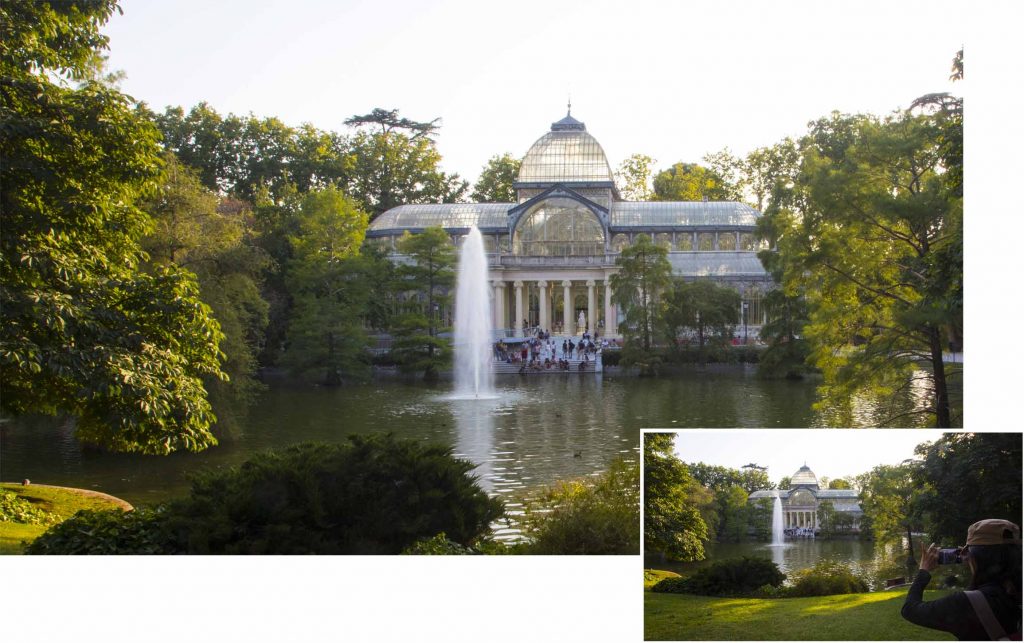 During our two days in Madrid Centro we explored the centro on foot. It was just a city, old and yet not old. The buildings were grand with plentiful of characters nothing like the streamlined skyscrappers of a modern city. The city was well maintained, streets and roads were clean and the old buildings had no stains. We felt pleasant walking the streets of Madrid. 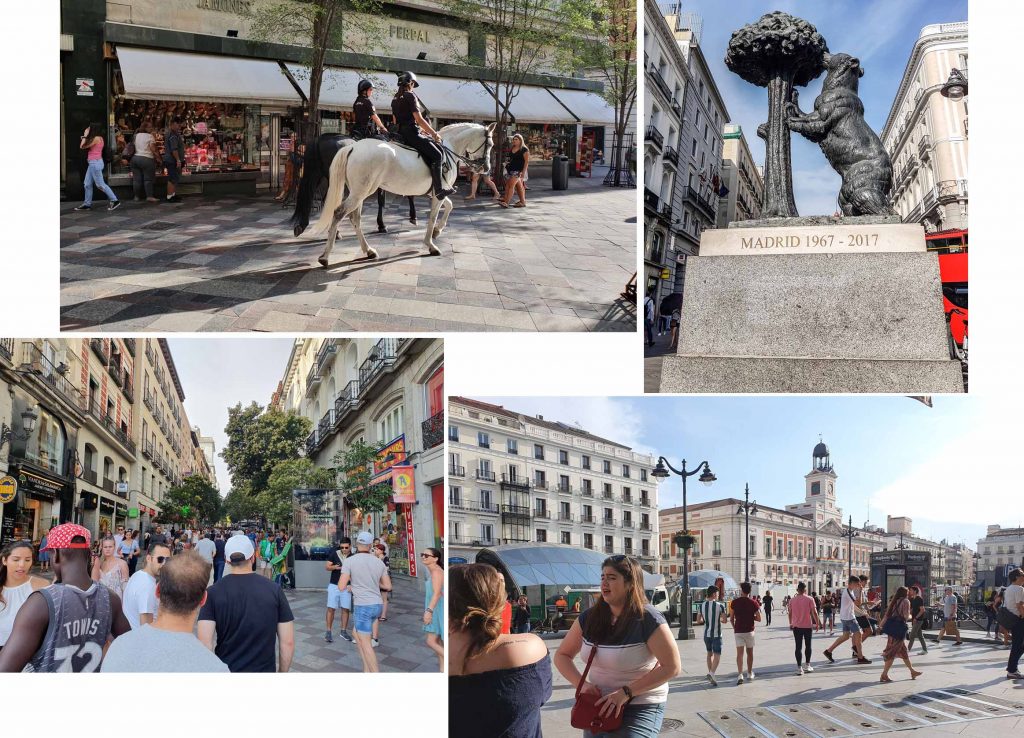 The streets of Madrid was very crowded in some areas with people walking too near for comfort. Yat Thong thought he felt someone touching the zip of his backpack, he immediately turned his head and saw three young girls too close behind him, they smoothly turned left and walk down a street. I took a look at the zip and it was opened by 3 cm. Wow! Pickpockets! Luckily we had only a bottle of water and a heavy DSLR camera at the bottom of the backpack. Cash, passport and wallet were tightly in our pants/shorts pockets. 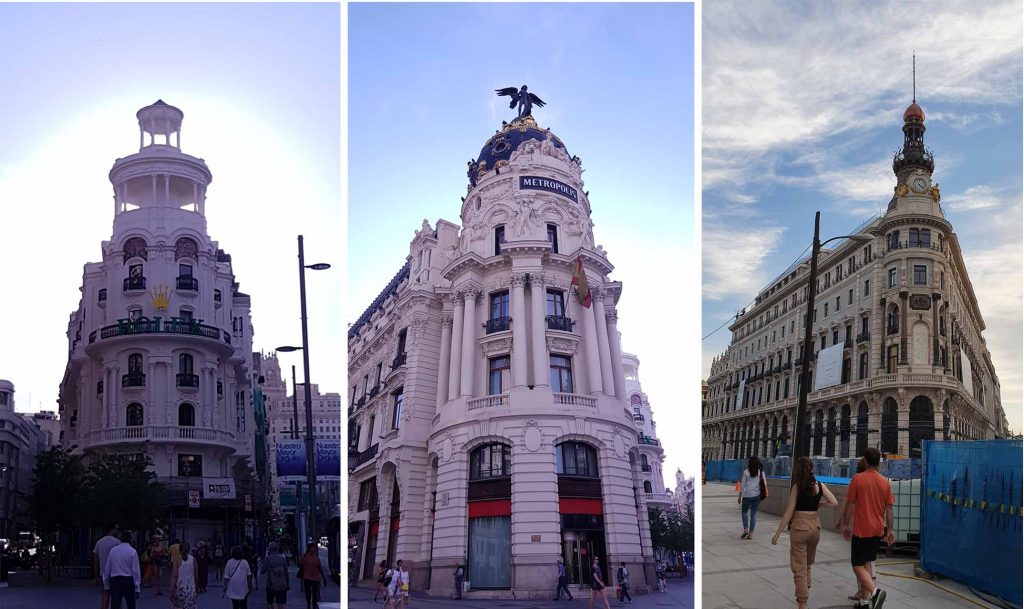 We strolled around the centro looking at one building to the next. Some of these buildings had very nice “tops”. At the meeting of two roads (Calle de Alcala and Gran Via) was Edificio Metropolis. This building was built in 1911 by two French architect brothers. The central dome was black with elaborate decorations in 24-carat gold leaf. On the top of the dome was originally a statue of Phoenix with Ganymede on one of its wings. The Phoenix was removed when the building was sold in 1972 and was replaced with the winged goddess, Victoria. 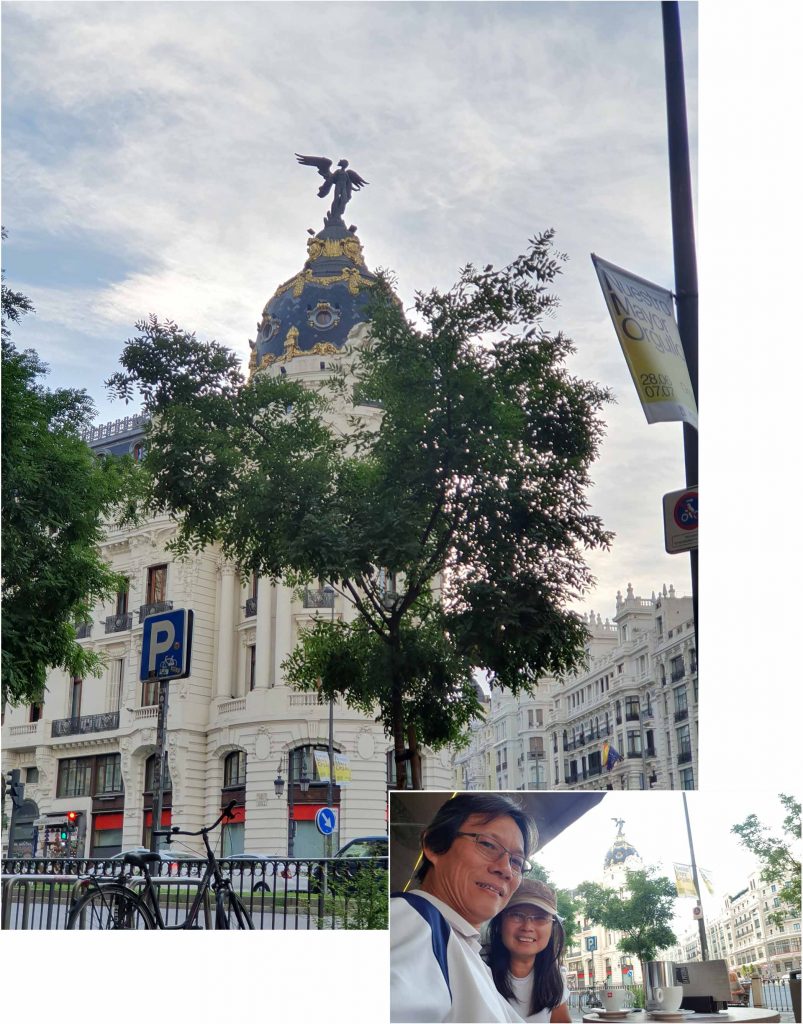 We found a cafe diagonally across the Edificio Metropolis, so we went there for coffee break. We were lucky to find a table with a view of the “Angel”. Each cup of cafe latte costed €3.20, double the price of a cup of latte elsewhere but for the sake of the view we guessed the price was okay.

It was about 9.10 pm when we walked past Plaza del Angel. There were several restaurants surrounding the square and “Cerveceria Santa Ana” (restaurant) was serving “Paella”. The restaurant looked nice so we sat down and ordered our dinner. 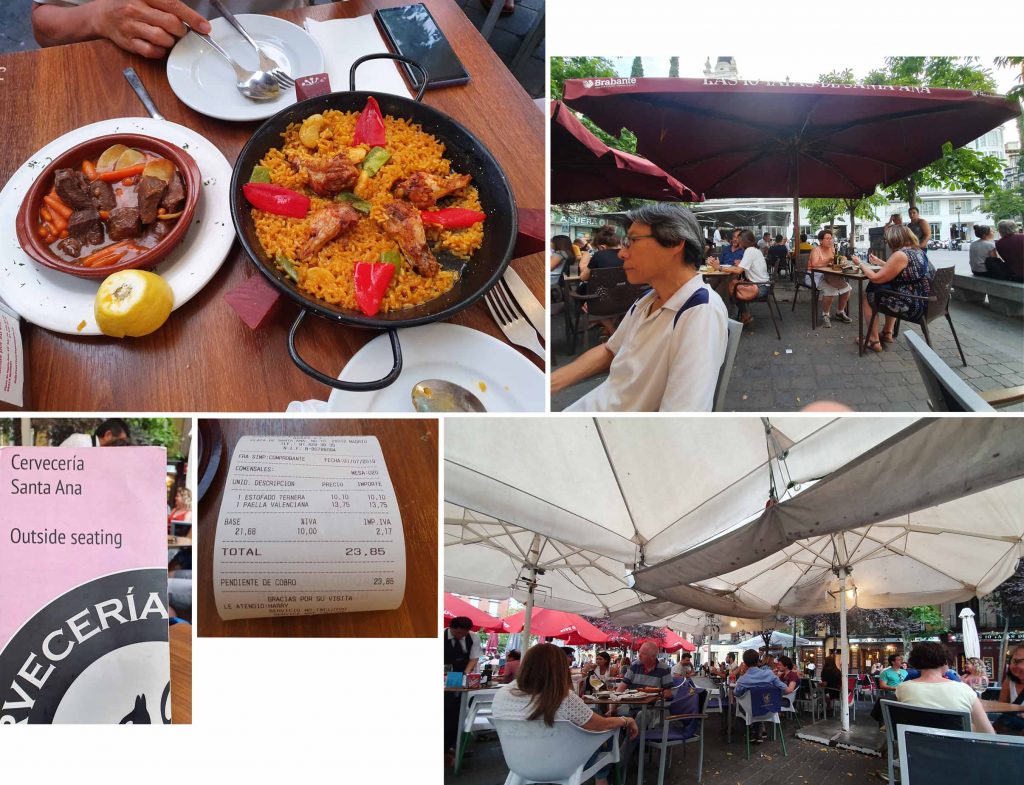 We had chicken paella and beef stew. The paella was of Valencia style,  I liked it but Yat Thong thought it tasted too sour probably too much lemon? 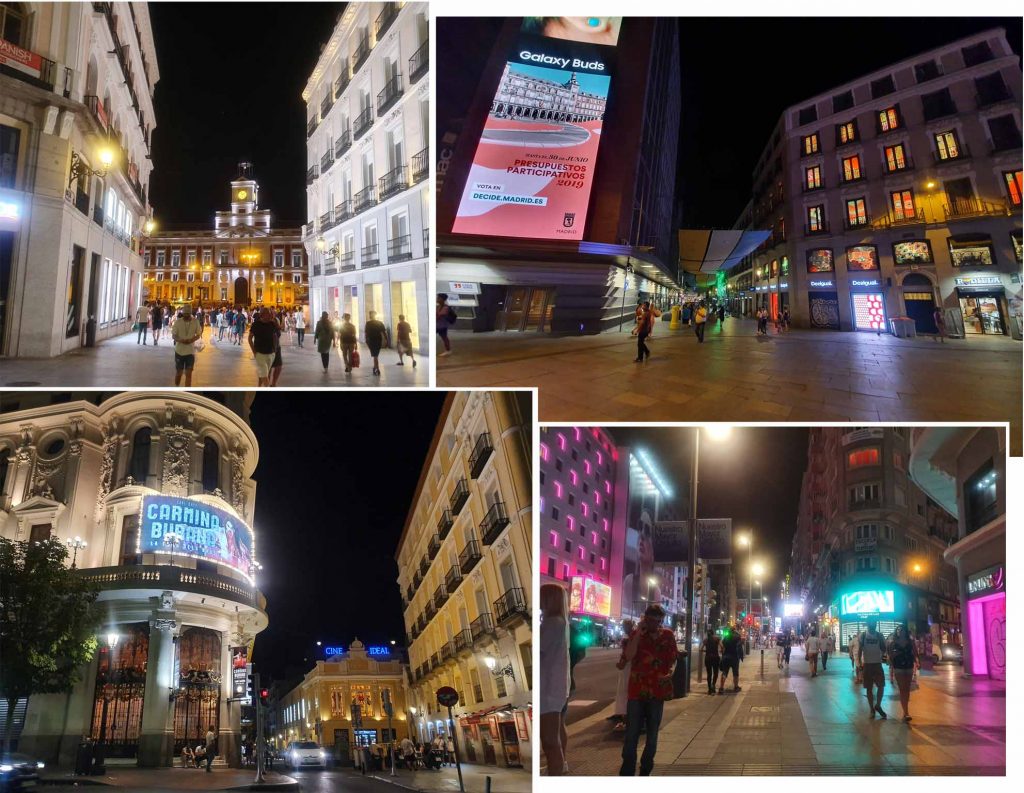 Our apartment was “Lavapiés Classy” booked on booking.com. The apartment was located in Madrid Centro near Lavapies subway station. We parked our car at Garage Ronda de Atocha and walk 650 m to “Lavapies Classy“. The walk was pretty easy as the path was proper pavement so pushing our cabin size luggage was not difficult.

Our “stay” was an apartment on the third level and we went up by a small elevator. It was a very cosy and classily decorated apartment. We loved the decoration. The apartment was very clean and everything looked new. 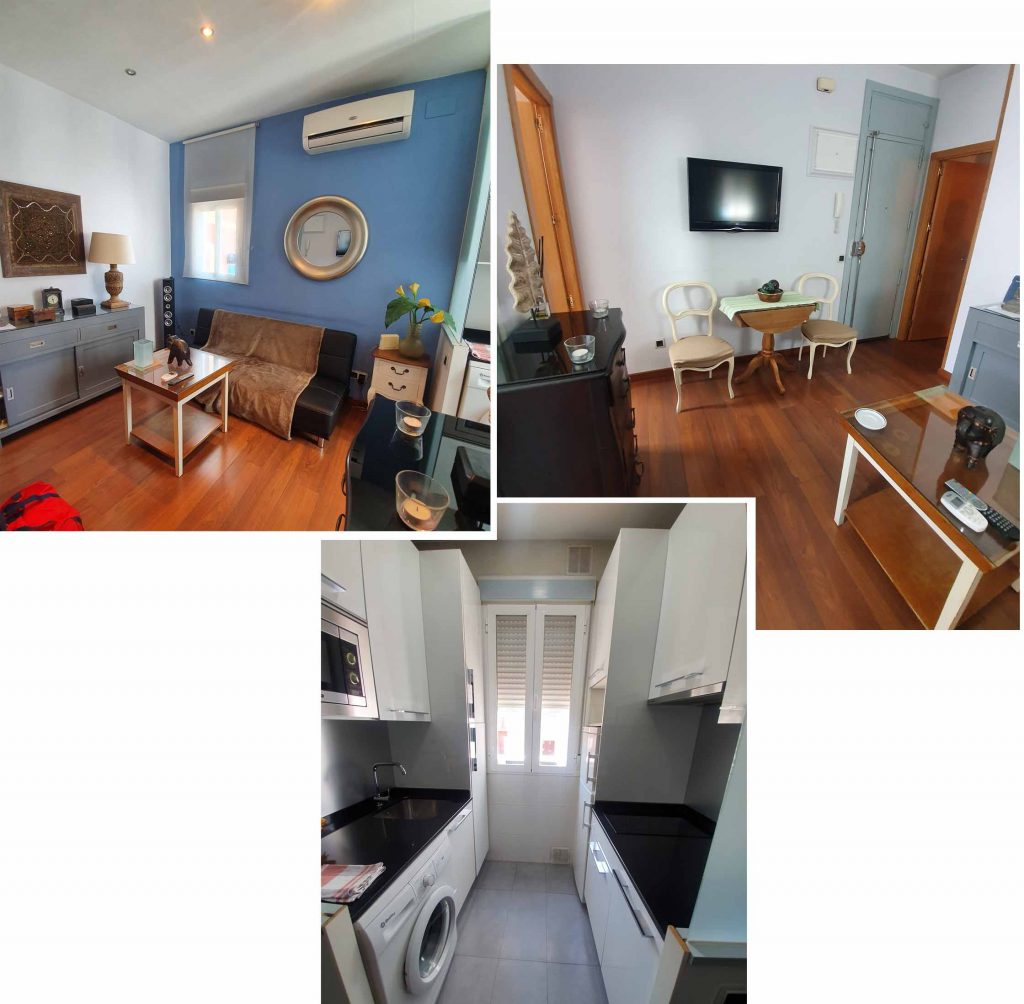 Sitting room and kitchen in the apartment

It had a washing machine which was great as it was time to wash our clothes. Unfortunately the place did not come with a dryer! We still found ways to hang and dry our clothes in the net two days.

The apartment had a small bedroom, it was also nicely decorated and was very comfortable. 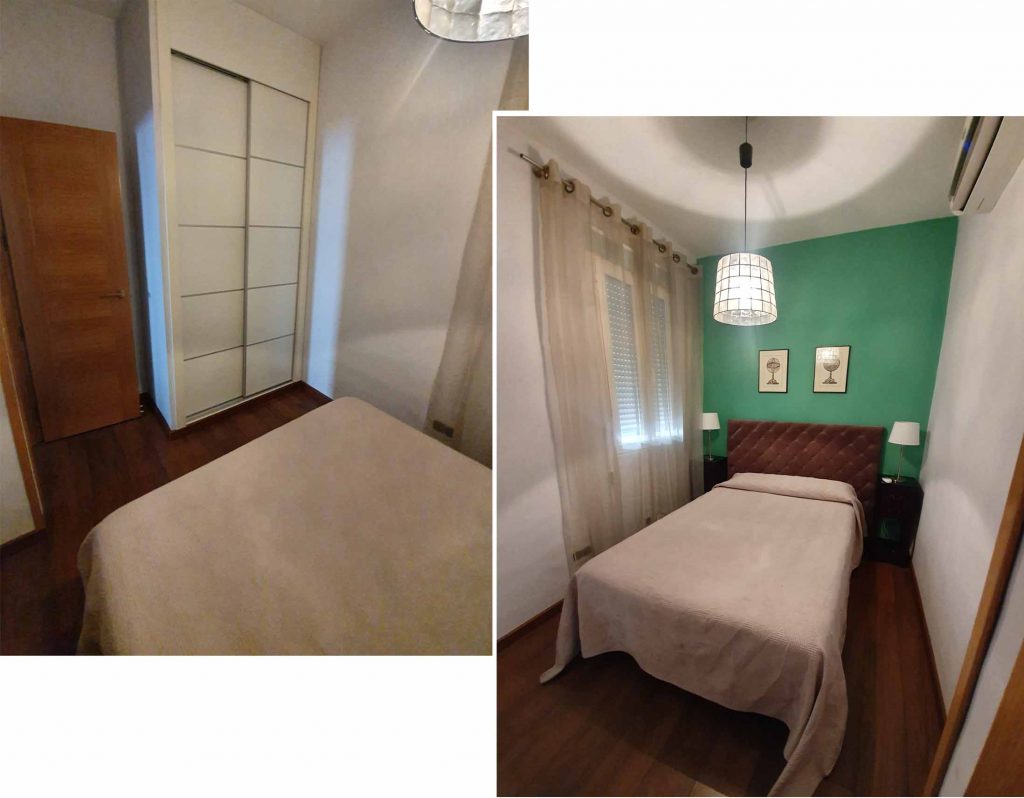 A small bedroom in the apartment

The bathroom was nice, new  and clean. For the price of €150 for two nights for the entire apartment was pretty good value for money. 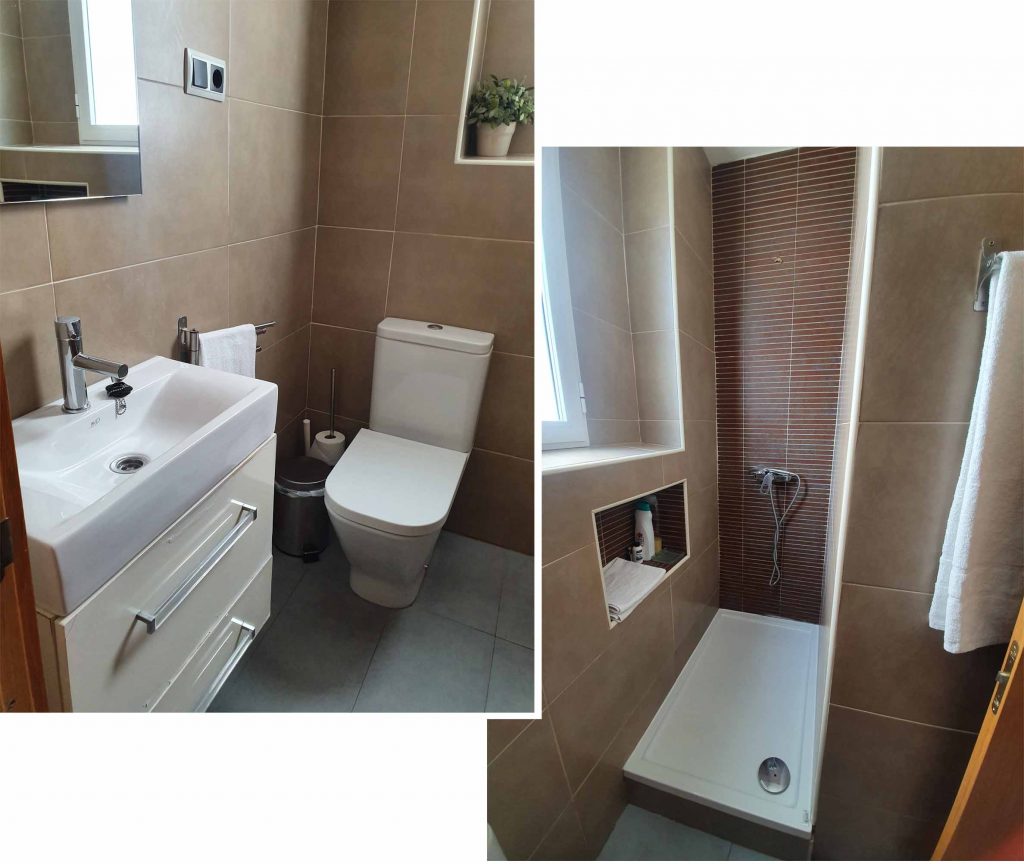 Toilet in the apartment 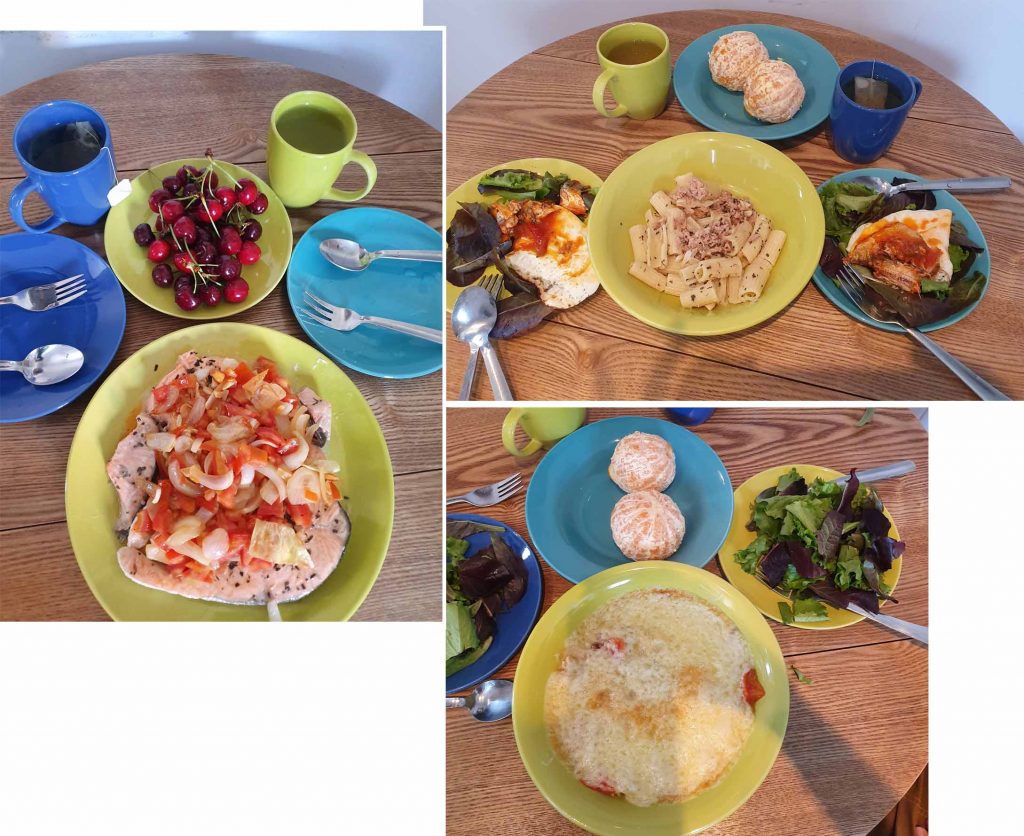 Salmon for dinner, pasta and eggs for breakfast

We liked “Lavapiés Classy” very much, it was certainly classy like its name. We had a very comfortable time in our apartment. The apartment was so cosy and cool that we did not feel like leaving the apartment at all!