We drove from Madrid to San Lorenzo El Escorial and stopped there to visit its famous Monastery. It was a  monastery that looked more like a fortress and a palace. After visiting the monastery we drove to Segovia where we had booked a hotel of the night. At Segovia we had a great time wandering the foot and the top of its famous Aqueduct, we also saw the Alcazar and the Cathedral of Segovia. Both were very lovely grand old buildings. 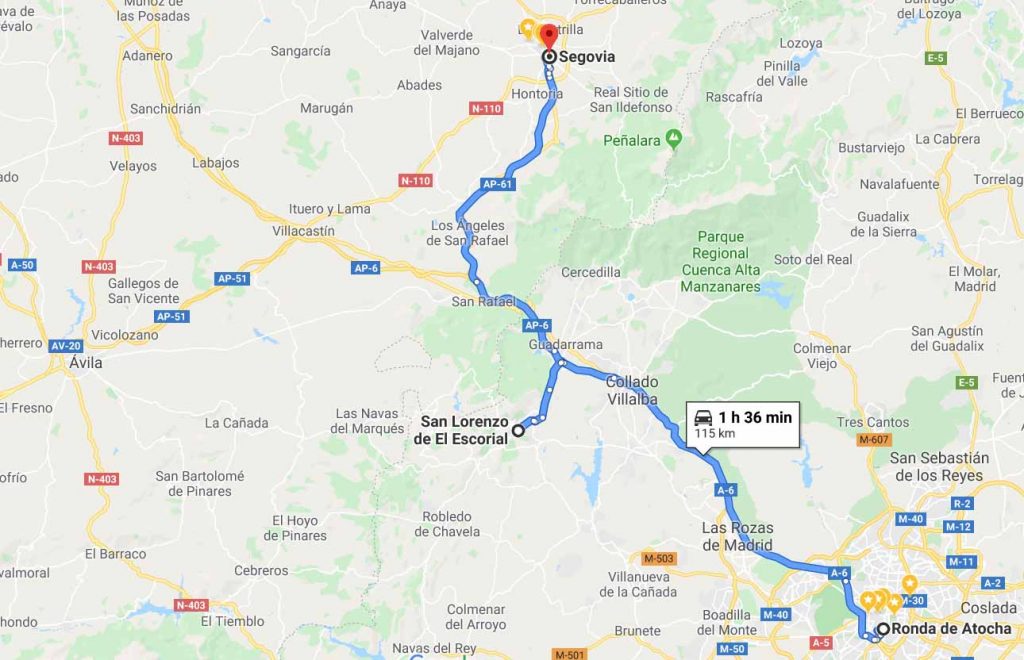 route from Madrid to Lorenzo de El Escorial to Segovia

We left Madrid at about noon and drove to Lorenzo de El Escorial, the drive took about 50 minutes and the distance was 61 km. At Lorenzo de El Escorial we searched for a place to park our car near the Monastery. There was no free parking nearby but plentiful of paid parking. At the parking meter we dropped €3.90 to get a ticket for 1hr 45 minutes of parking. 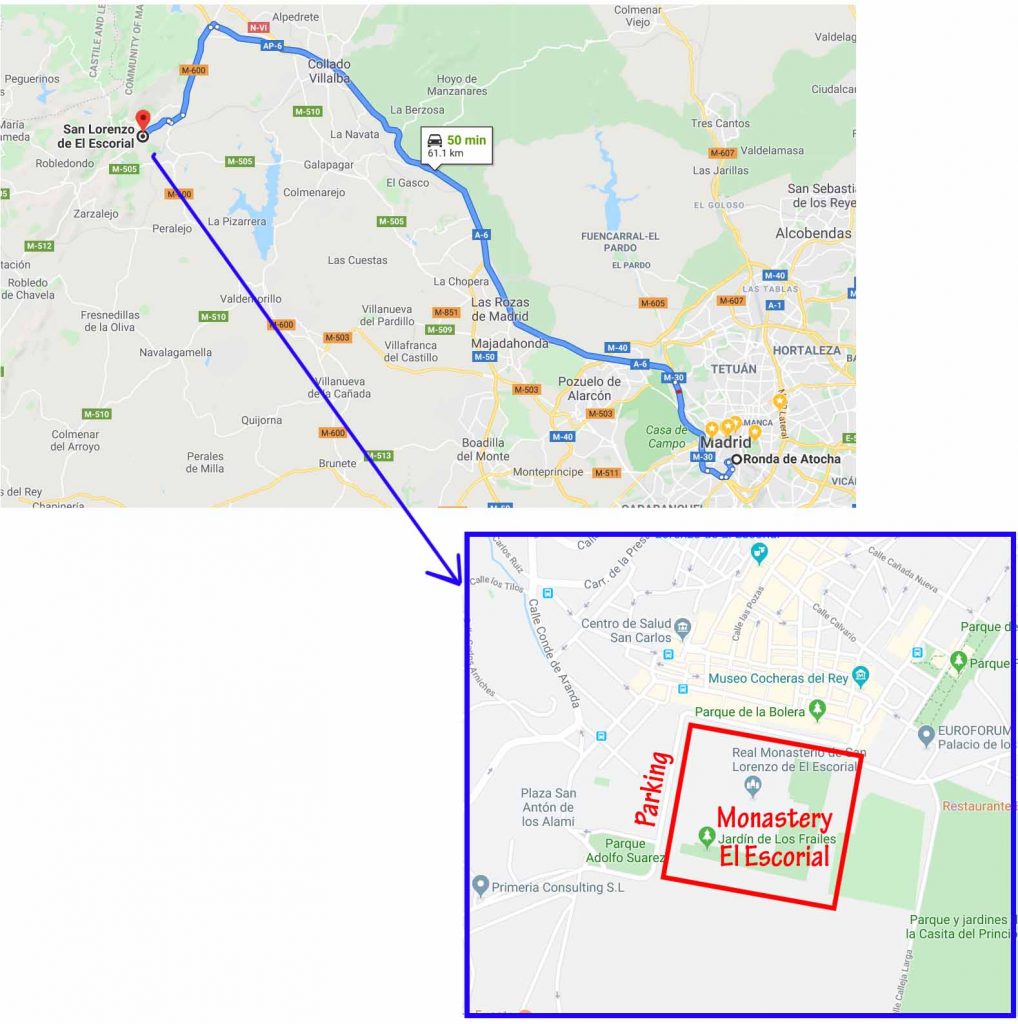 Monastery El Escorial or Monasterio del Escorial was a historical residence of the King of Spain and had functioned as a monastery, a basilica, a royal palace, a pantheon, a library, a museum, a university, a school and a hospital through the passage of time. 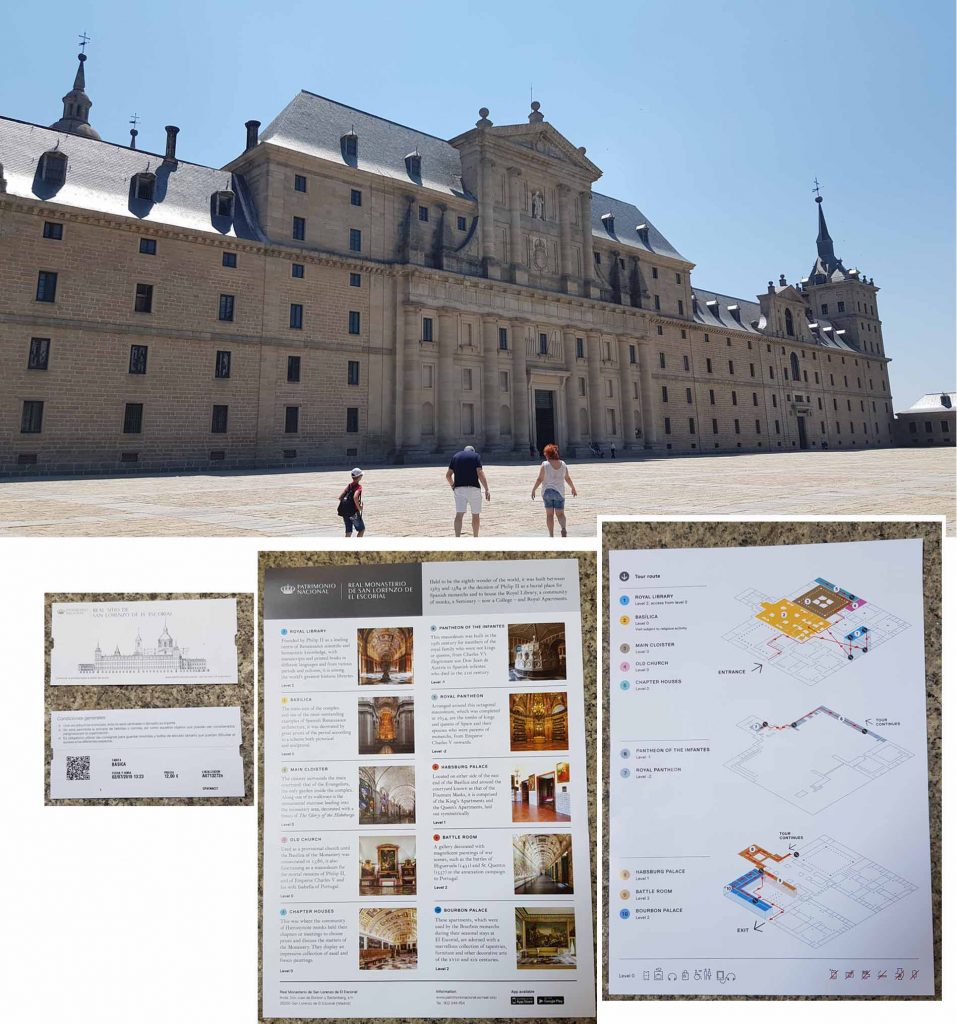 The entry ticket into the Monastery costed €12 per person, photography of its interior halls was not allowed and all bags had to be deposited in the cabinets provided before proceeding into the halls. The tickets came with maps with walking route instruction. There were not many visitors, in fact there were more security personnels than visitors! They were constantly “eyeing” visitors making sure that we were not taking any photos. 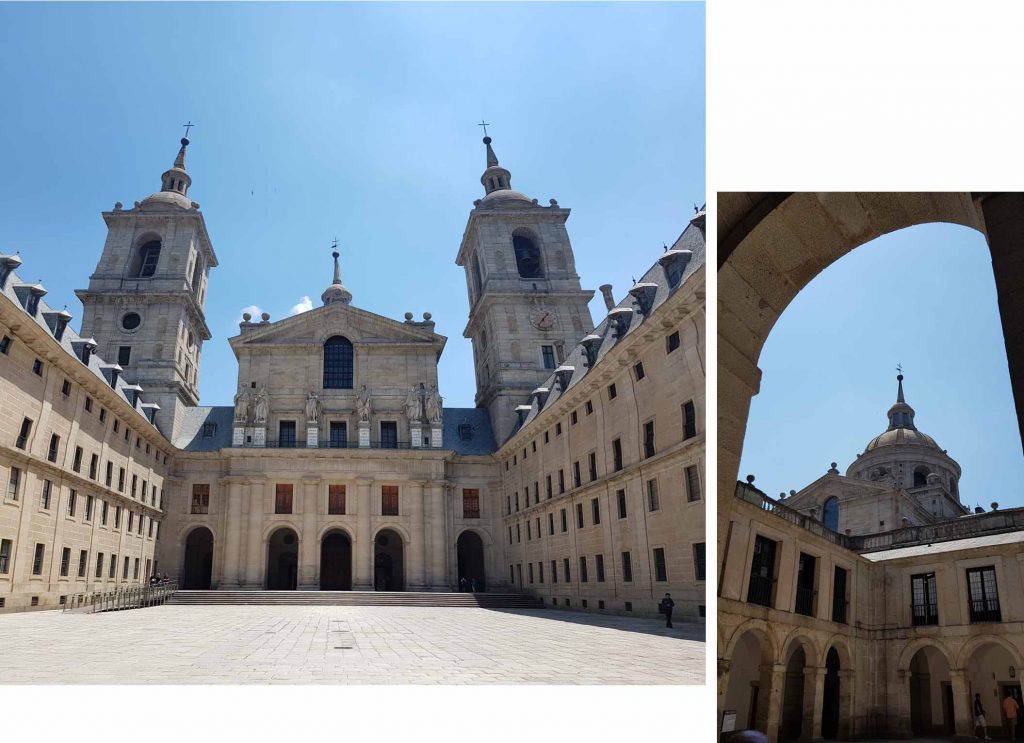 We spent about an hour and a half exploring the complex. The place was divided into 10 sectors spreaded out on two levels, they were Royal Library, Bascilica, Main Cloister, Old Church, Chapter Houses, Phanteon of the Infantes, Royal Phanteon, Habsburg Palace, Battle Room and Bourbon Palace. The interior of the monastery complex was decorated by many notable Spanish and Italian artists of the 16th and 17th centuries. 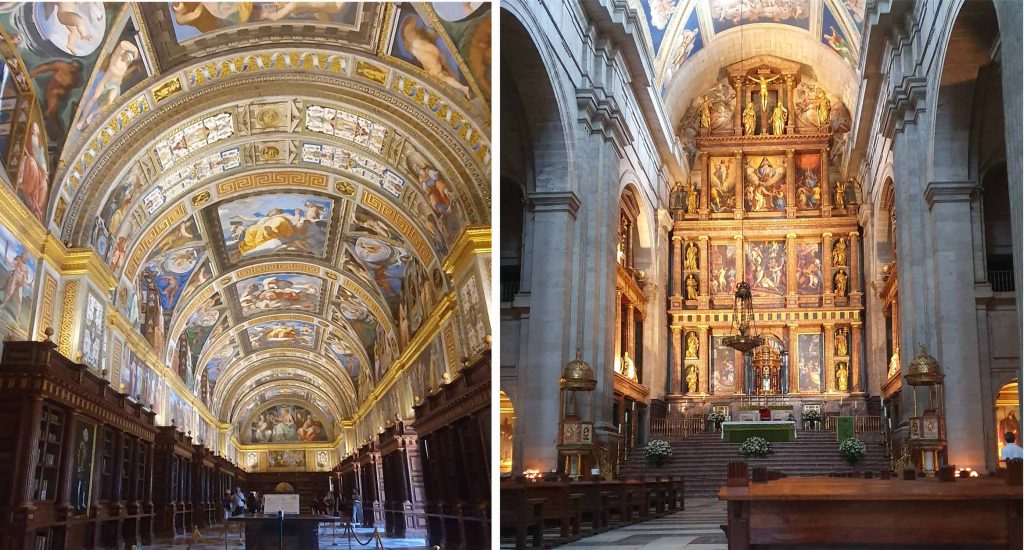 We liked the Royal Library very much it was very beautiful and reminded us of the Library of Vatican City. In the 16th century, King Phillip II of Spain wanted to build a library that hold not only books and manuscripts of philosophy and theology but also instruments of scientific learning such as ornate globes and astrolabes, both clestial and terrestrial, and maps of the known world. It was fascinating looking from one exhibit to the next. 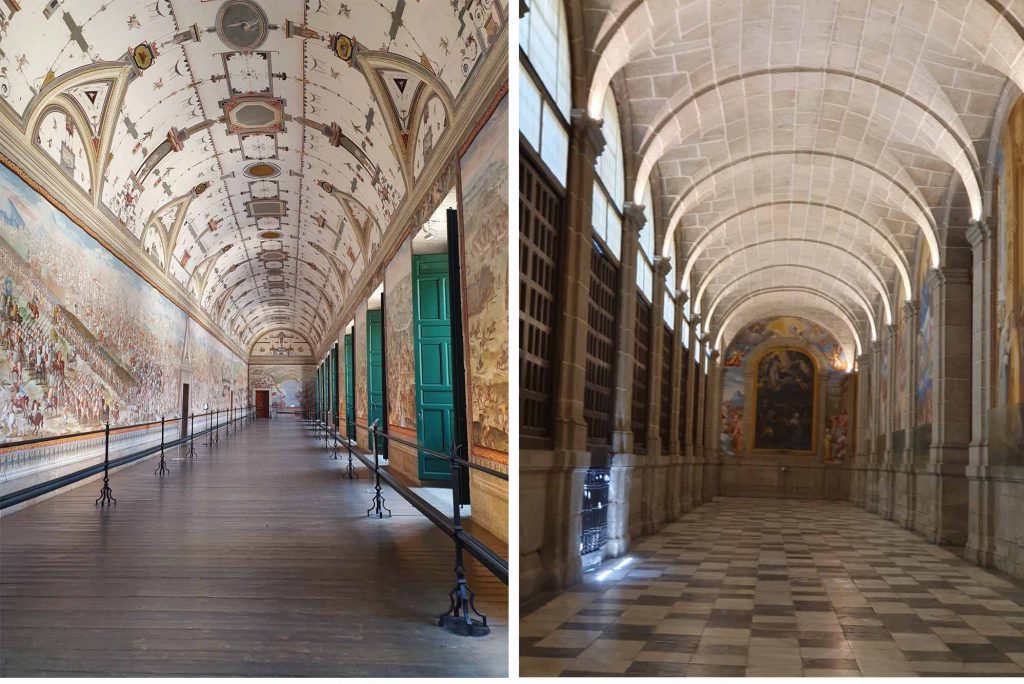 The Main Cloister surrounded the main courtyard and was filled with panels and panels of fresco arts. In the Battle room had a long painting depicting the war along its long length.

At 3 pm we left San Lorenzo El Escorial for Segovia. It was just a 45 min drive over a distance of 54 km. When we reached Segovia instead of checking in  we drove on to three miradors where we could see the beautiful Alcazar of Segovia. 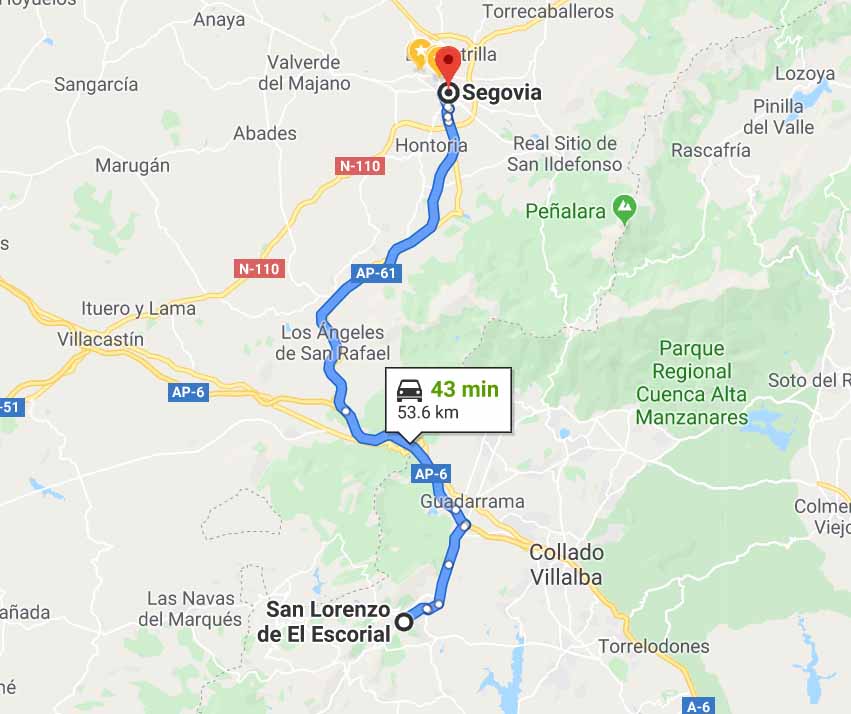 We found road side parking which was a set-in (co-ordinates: 40.952285, -4.134089) between the first and 2nd miradors (Mirador del Ultimo Pino and Mirador del Alcazar y los dos Valles). From the parking we could see the Alcazar which was tall and gigantic but its view was blocked by many trees and bushes. To reach the two miradors we had to walk to down the road and up a trail. Unfortunately the weather was “boiling” hot so we did not want to proceed up the trail. 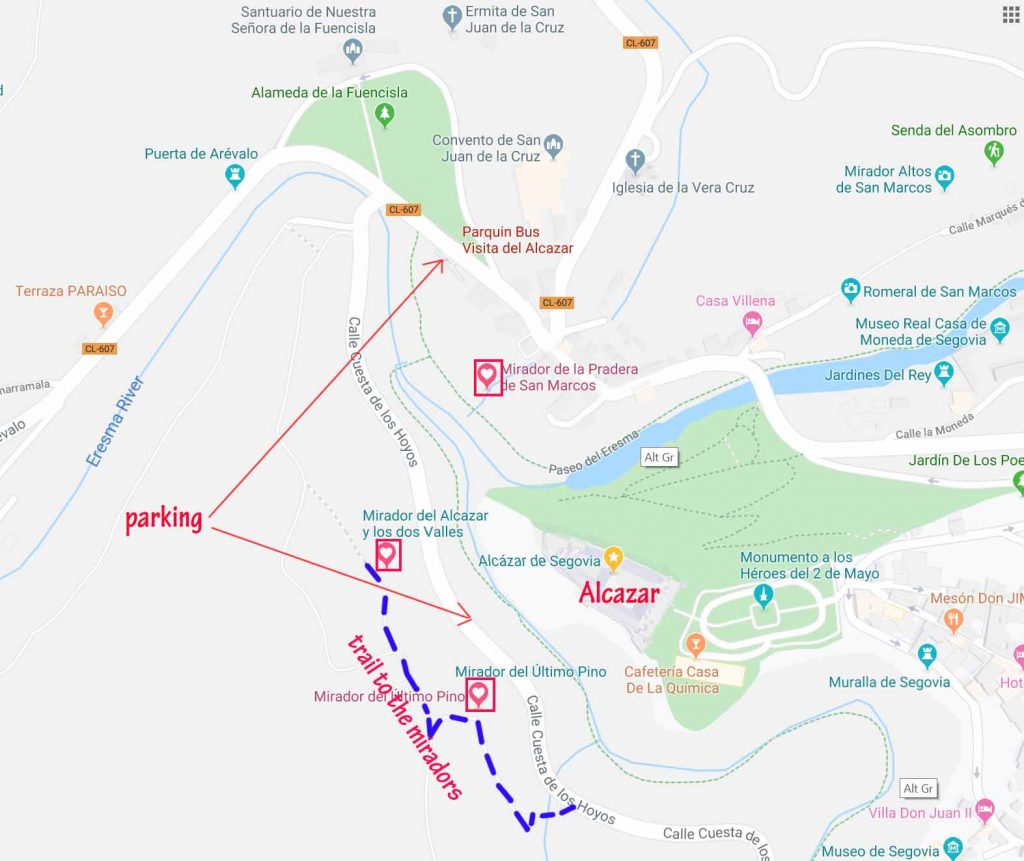 Map of Alcazar of Segovia and its surrounding

We drove forward down a curving road to the 2nd parking which was near the third mirador (Mirador de la Pradera de San Marcos). At the 3rd mirador was a bottom up view of the Alcazar. The Alcazar looked a bit like a disney castle with its turrets and sharp blue roofs. This Alcazar was originally built as a fortress but had served as a royal palace, a state prison, a Royal Artillery, military academy, a museum and a military archives building. 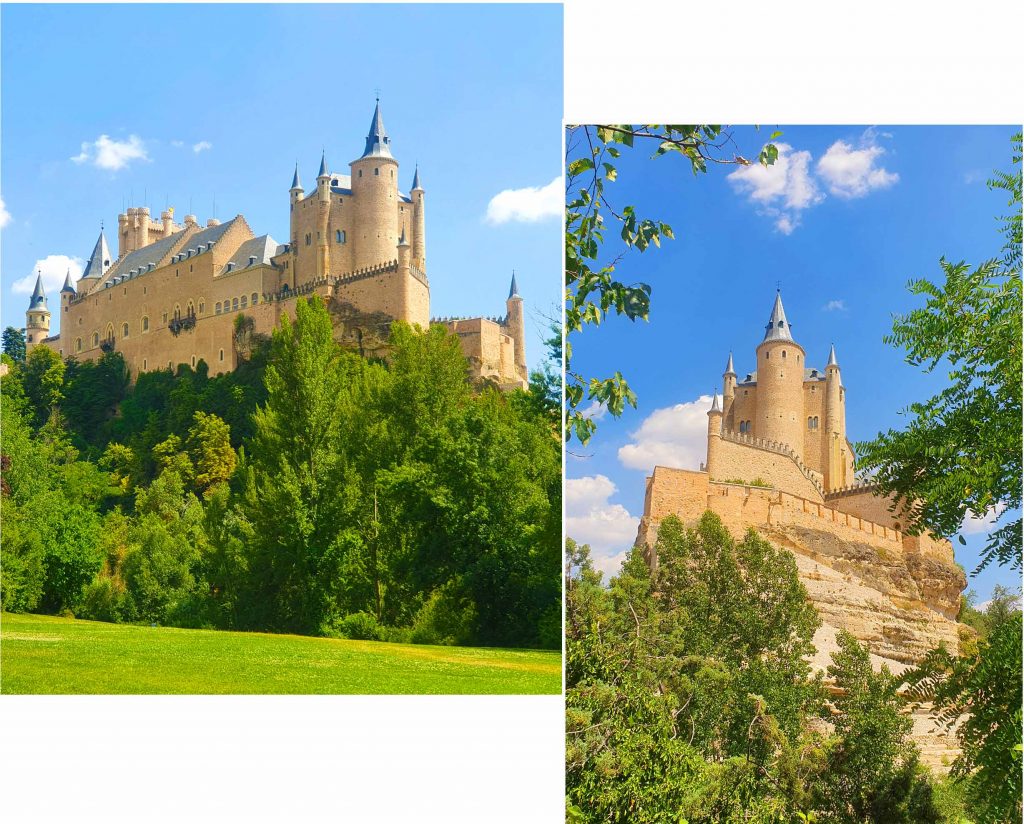 If was after the sun had set, the sky “blackened” and we were done at the Aqueduct that was when we returned to the Alcazar. We managed to photograph the Alcazar in the dark which was definitely not as nice as it would have looked during the sunset hour. 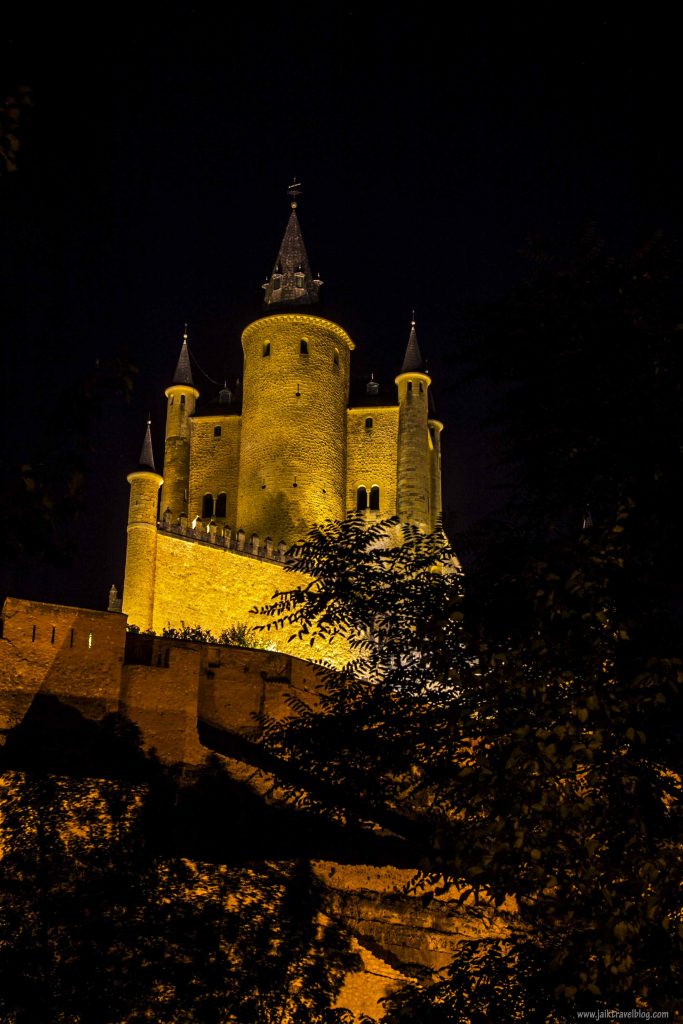 Alcazar of Segovia at 11 pm

Somewhere on the road in Segovia, we also saw a distance view of the Catedral of Segovia. The catedral was built at the highest point of the town. It was in the late Gothic style and was constructed in 1525 after a fire in the old Romanesque cathedral in the year 1520. 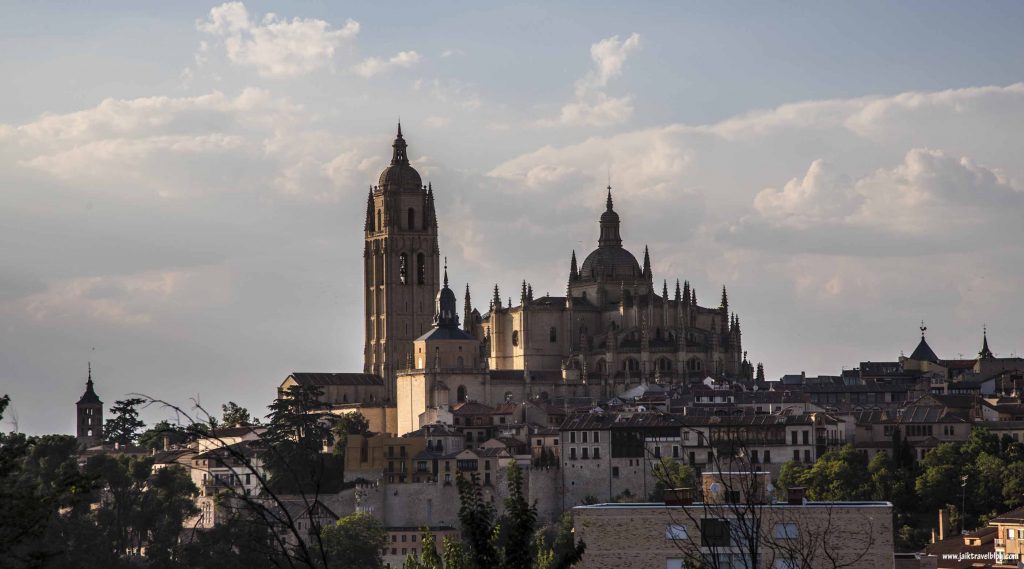 Just after we parked our car along a street near to our “stay”, as I was getting ready all the “stuffs” we wanted to bring to the “stay” and to check in, I found to my horror that I had lost my LGG6. It was a spare phone that I had brought along with me on this trip which I used to take photos whenever my main phone ran out of battery power. OMG!  I turned my backpack inside out, I searched my car front to back but just could not find my LGG6!

Instead of checking in, we drove back to all the miradors in Segovia where we had stopped earlier in the day to search for my handphone. It was a sad reality that I lost my phone and would not ever see it again. I knew I had it when we were on our way out of Madrid, I vaguely remembered seeing it in San Lorenzo El Escorial (but I was not sure). So where did I lost it? Madrid, San Lorenzo El Escorial or in Segovia?

After we checked in to our “stay”, we went to the hotel receptionist to find the whereabout of the nearest police station. We could either walk 750 metres to the Police Station or drive 2.2 km. 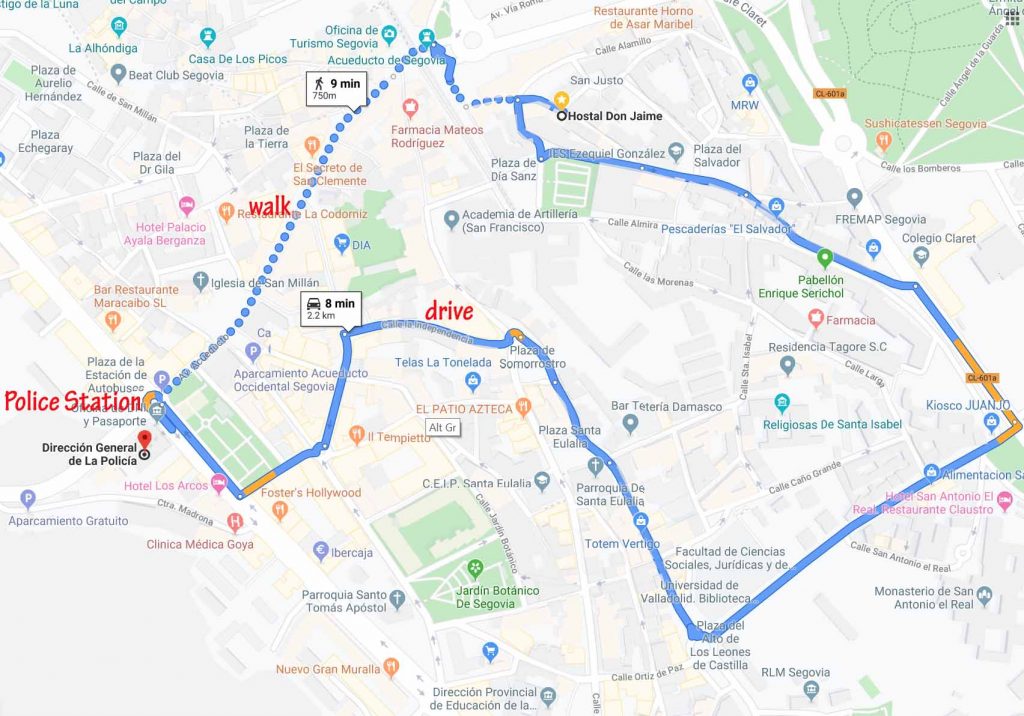 We drove to the station to make a police report concerning my lost home. We needed the report in order to make an insurance claim when we reached home. The policeman at the station was not fluent in English so he connected me to another policeman over the phone in “somewhere else”, apparently this was the standard procedure when dealing with English speaking tourist. The policeman over the phone recorded my statement and when all was done the Segovia policeman went to his PC and printed report  for me.  Oh how convenient!

Our “stay” was just a corner turn to the Aqueduct of Segovia. The aqueduct was “HUGE” and magnificent. It was the largest and highest aqueduct that we had see to date. Wow! We were certainly very impressed! 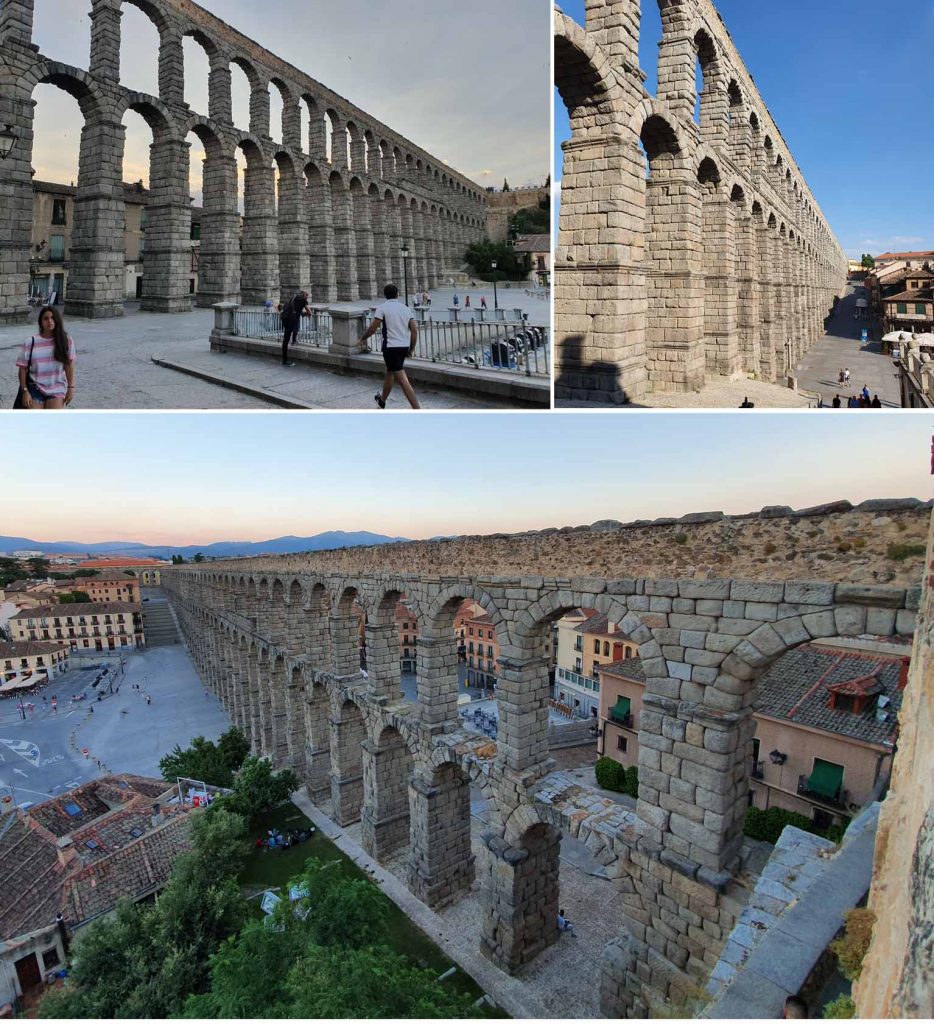 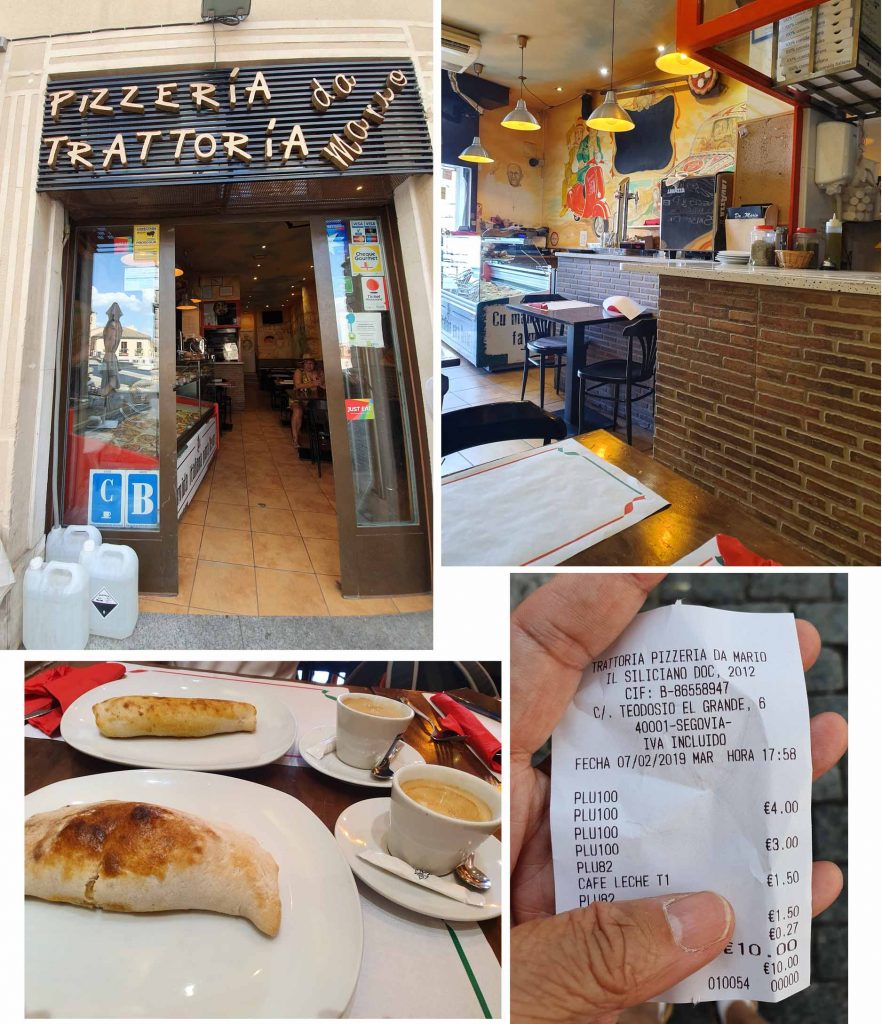 Our coffee break at Pizzeria Trattoria

The Aqueduct of Segovia was inscribed on the World Heritage list in 1985 and was one of the most intact Roman aqueducts in Europe. It was built during the second half of the 1st century A.D. under the rule of the Roman Empire. It supplied water from the Frior River some 16 km away to Segovia. 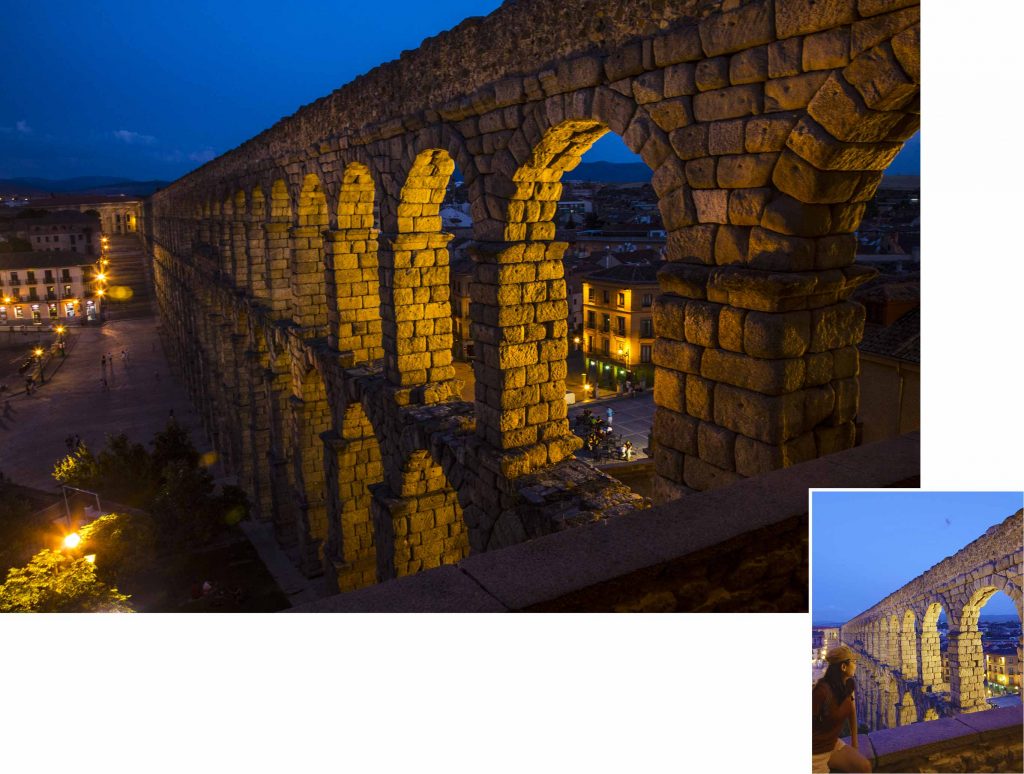 Aqueduct of Segovia after sunset

We had a great time exploring the aqueduct from its base to the top. It was built with some 24,000 dark-coloured Guadarrama granite blocks without the use of mortar. The aboveground portion was 728 metre long and consisted  of 165 arches more than 9 metres high. Near the town center there was a “dip” in the terrain and to maintain the leveling of the aqueduct it needed two tier of arches at the dip extending up to above 28.5 metres from the ground. 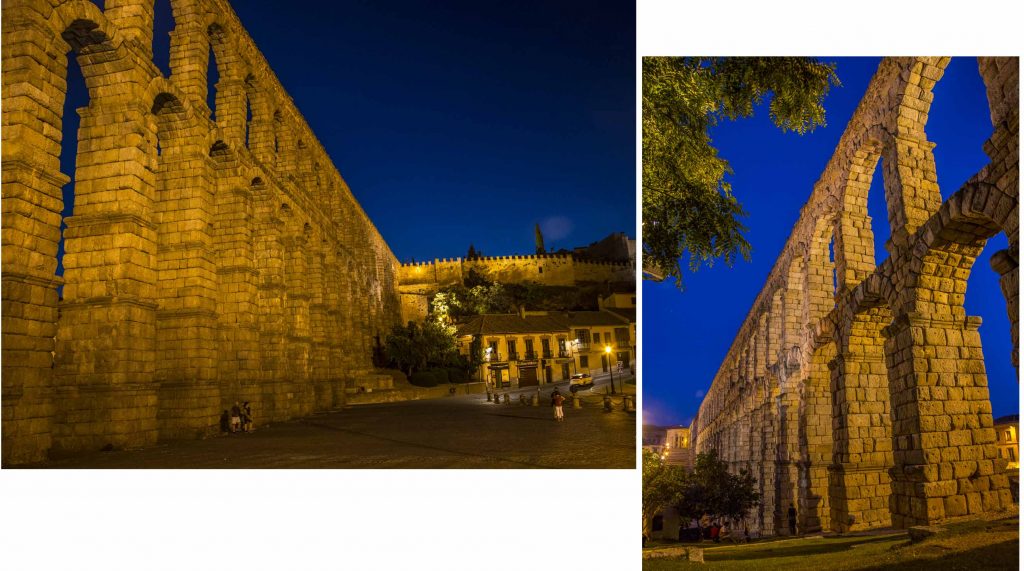 Great for us that the place was not crowded with tourists at night. We found a quiet cafe Restaurante Casares that had a great view of the Aqueduct  to have our nightcap. It was actually late night cakes and plain water. The night temperature was cool and it was so relaxing to sit at the cafe outdoor sitting area and see the “world” went by. We stayed till the cafe closed at midnight then walk 100 metres to our stay. 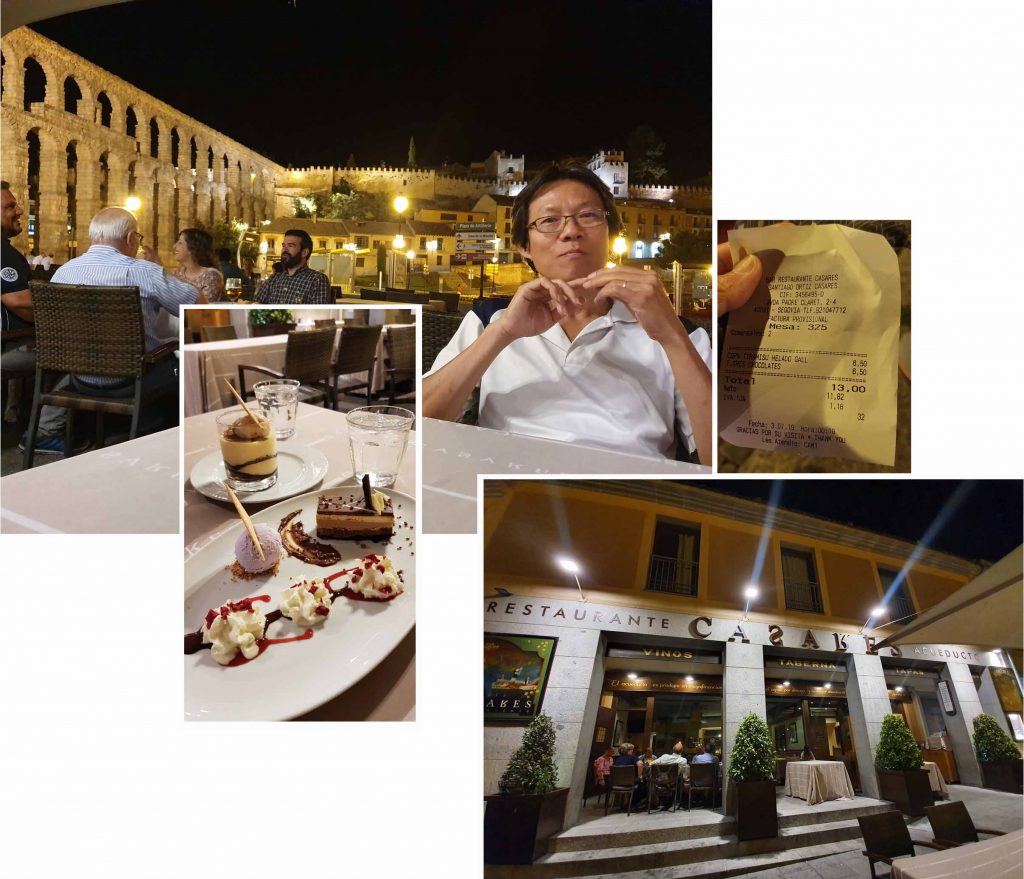 Cakes with a view at Restaurante Casares

We stayed one night in Segova at Hostal Don Jaime reserved with booking.com. The cost of the twin room was €52 with ensuite bathroom, no breakfast. Parking onsite was available at €10 per stay. 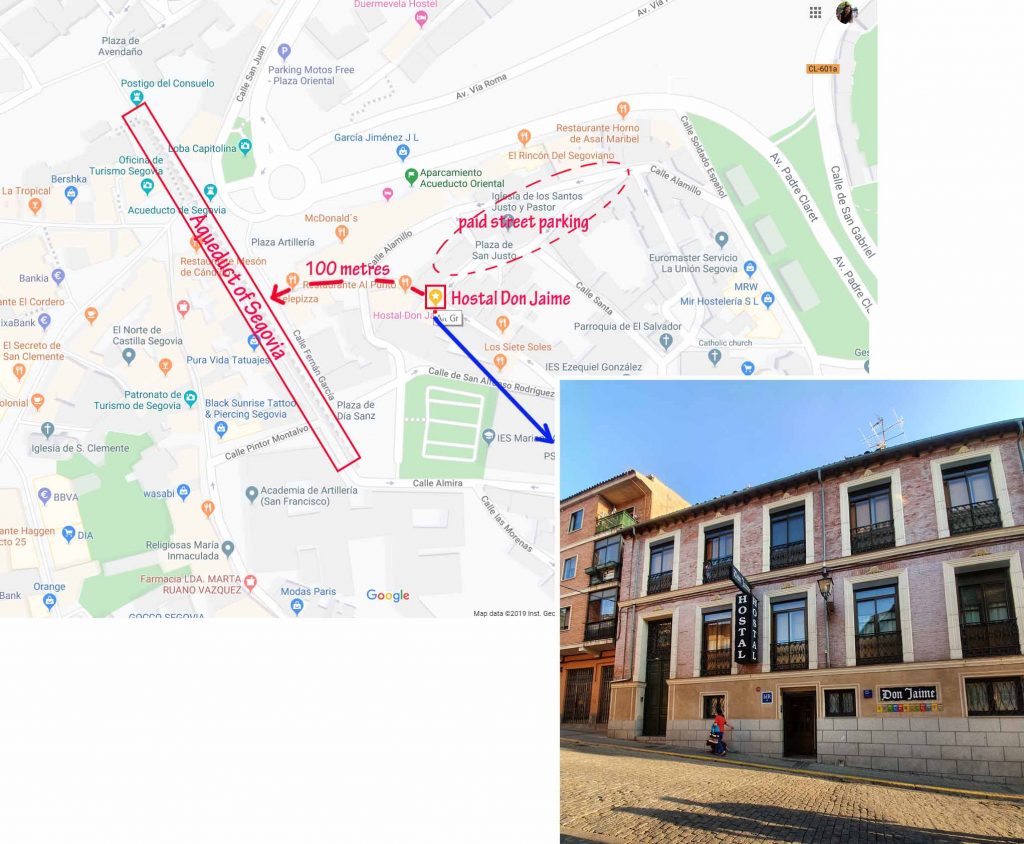 Map of Aqueduct of Segovia and Hostal Don Jaime

Hostal Don Jaime was a relatively inexpensive “hotel” very close to the Aqueduct of Segovia.  Though from the hotel we could not see the aqueduct, the aqueduct was just round the corner about 100 m away. Checked in was pretty easy and the receptionist was very helpful. 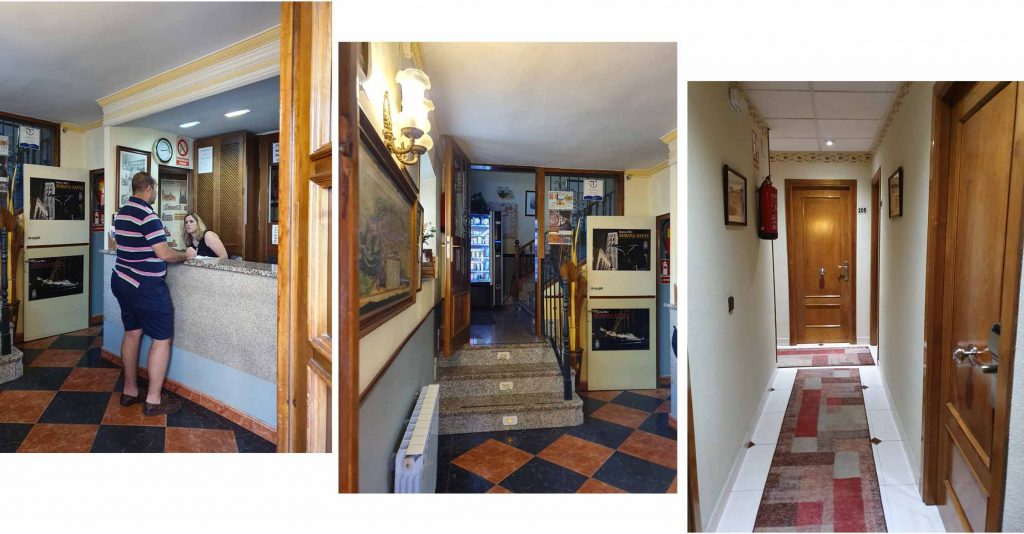 Our room was on the second level and there was no lift/elevator in the hotel. We were fine with walking up the stairs as we only carried our overnight bags. The room was very simple but clean. The bathroom/toilet was ensuite and clean.  There was no kettle or mini fridge in the room and no bottled water was provided. 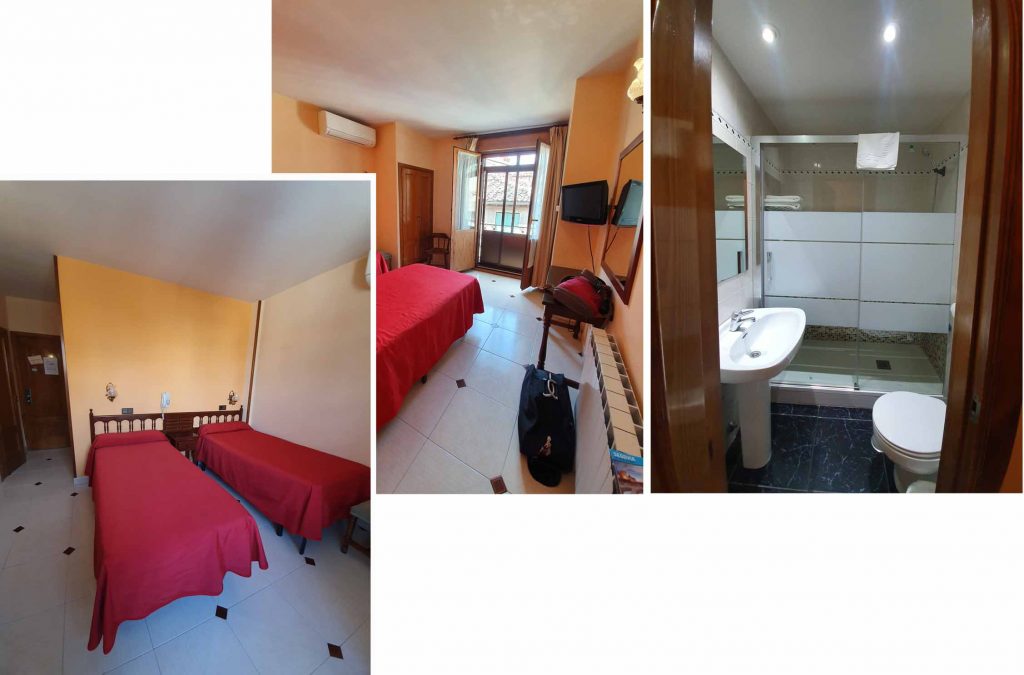 Generally Hostal Don Jaime was a basic, inexpensive hotel good for one night. Since we had limited time in Segovia we spent most of our time outside the hotel. We were at the miradors, we were at the aqueduct, we were enjoying coffee at nearby cafe, we were relaxing at  Restaurante Casares overlooking the aqueduct enjoying cakes till midnight. We were hardly in the hotel so it basic-ness did not bother us. Its location so near the Aqueduct was definitely a plus.