We had two days to explore Valencia. It was a lovely place  and one of the  places in our itinerary we were looking forward to visit was the “grand old market”, which was not the typical modern supermarket.  “The Central Market of Valencia was an array of vivid colours and aroma.

Our “stay” was just at the fringe of the old town so  we were able to easily explored the old town on foot. Beside the old town we also visited Valencia’s famous beach and its ultra modern City of Art and Science. 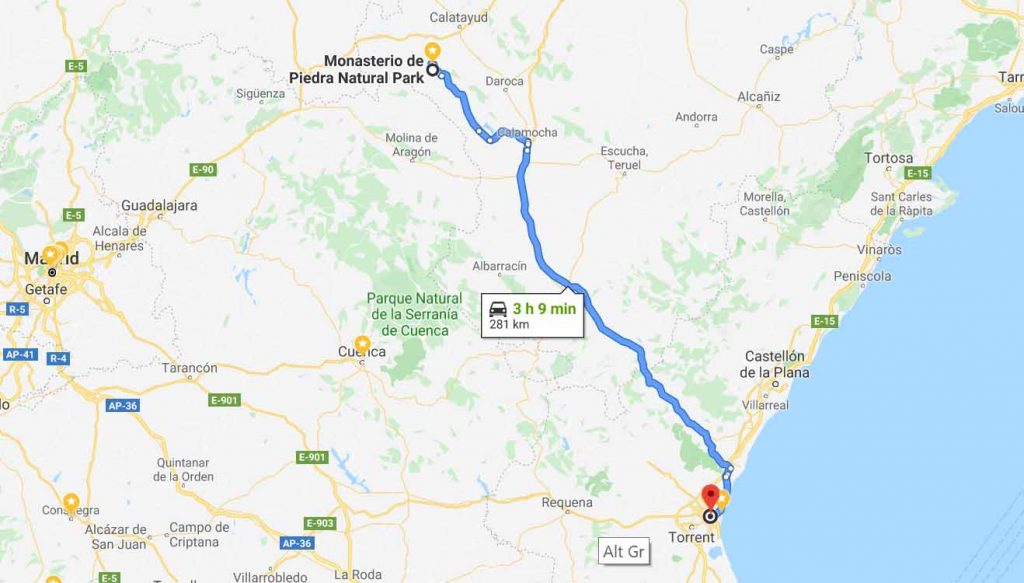 On our way to Valencia

It was a non eventful drive from Monasterio de Piedra to Valencia. We drove through huge agriculture land with “endless” stretch of golden “crop”. We stopped our car and came down to have a look at the “crop”, it looked like wheat. Apparently 10% of Spain agriculture land was for growing grain (wheat). 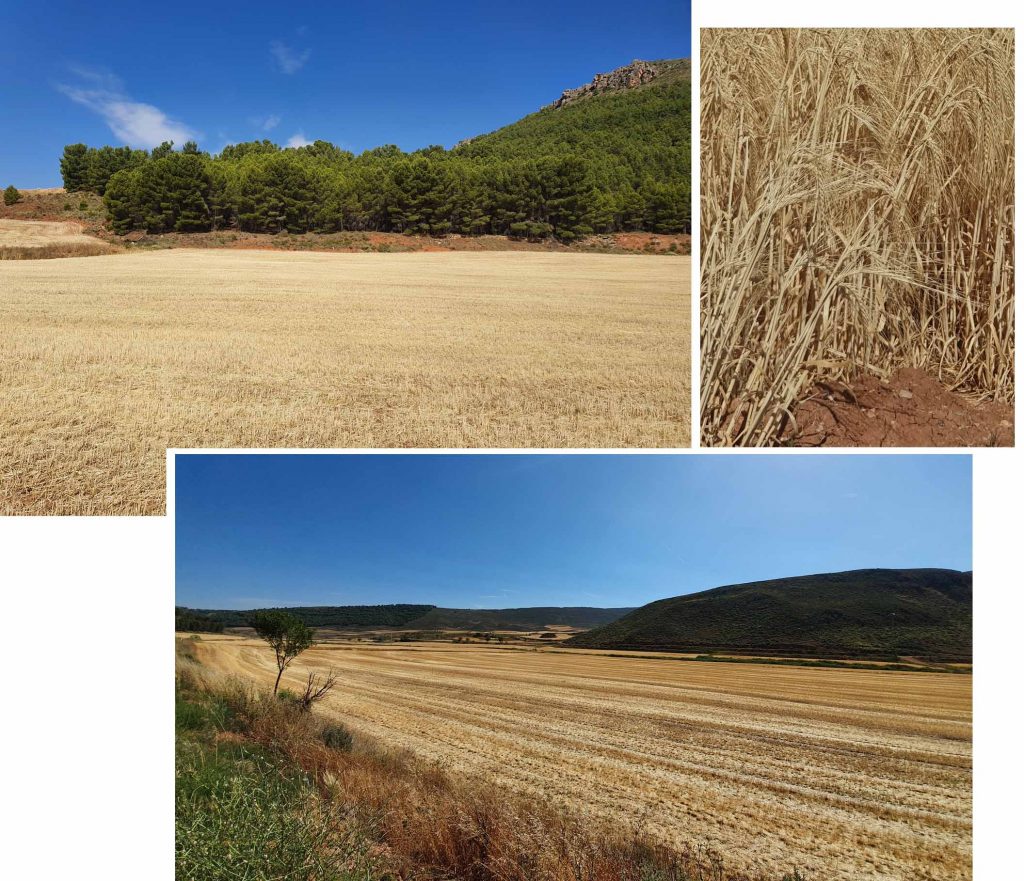 After the “golden crop” the drive got terribly boring until we reached the outskirt of Calamocha town when we saw a row of colorful houses. We turned into the road leading to the houses wondering if we could find a cafe for coffee break. The houses looked new and nearly identical except for the different colors but sadly among them there was no cafe. 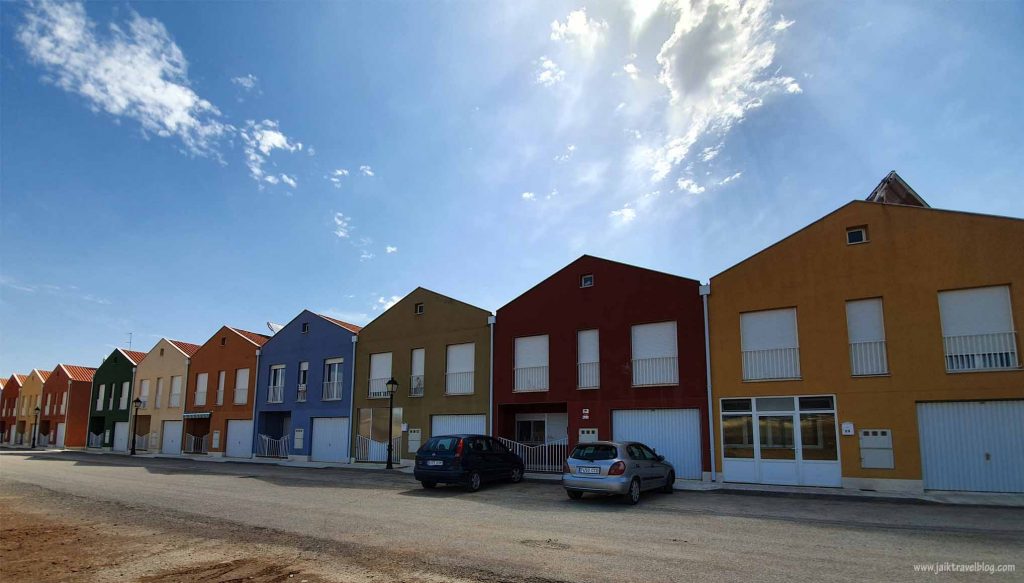 We drove for another hour before we stopped at a highway reststop for our coffee break. Cafe places at reststops were usually less exciting. They were pretty standard “sterile” cafe places and their item prices were usually higher. 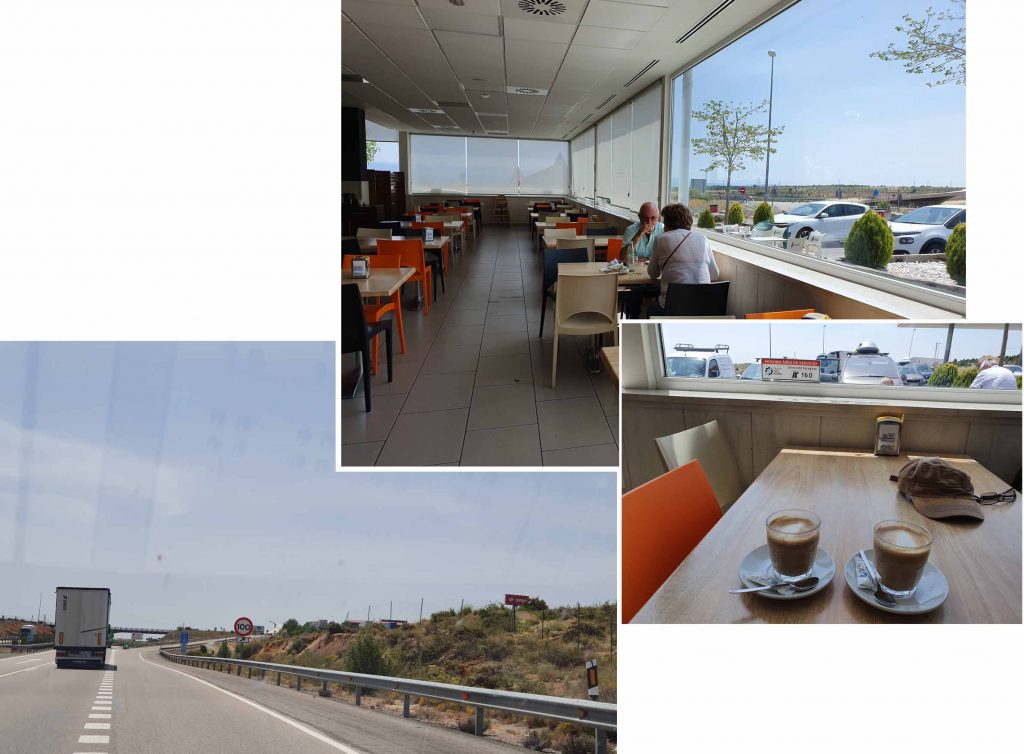 We reached Valencia at about 3 pm and drove into the town center. It was a vibrant town, very beautiful and clean. The town center looked interesting with plentiful of grand old, majestic buildings.  We decided not to go to our “stay” yet but find a place to park our car and explore the center. 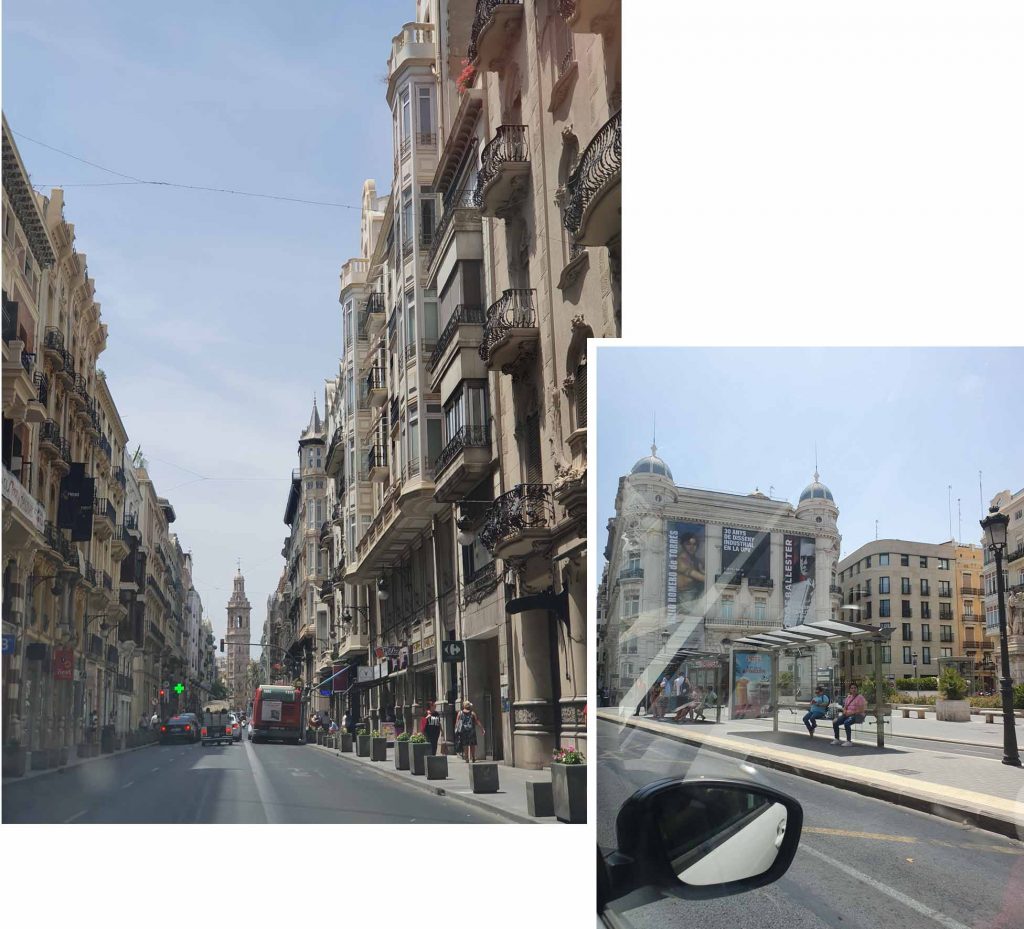 We looped around the central looking for a place to parking. But there was no road side parking in the immediate vicinity. We looped further away and found a basement paid parking at “Parking Lauria”. Parking charge was €7.60 for about 2.5 hour. 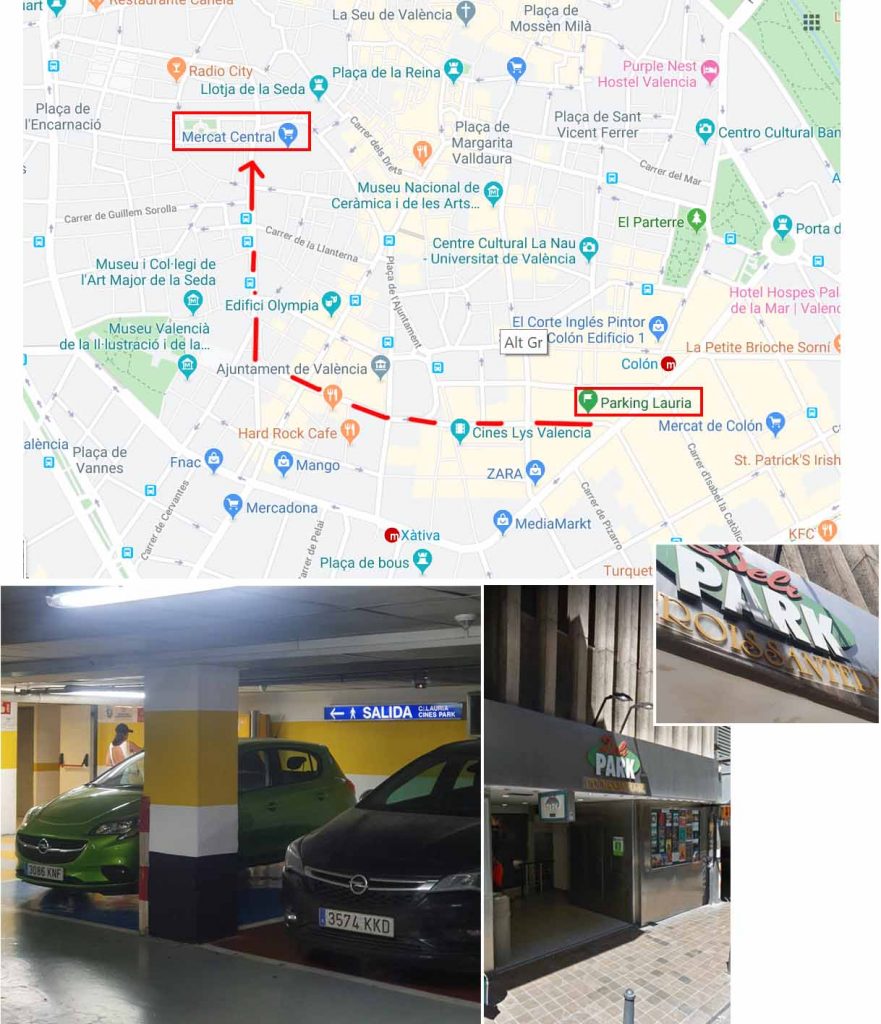 From “Parking Lauria” was a short 300 m walk down the one way road to the “center”.  It was a busy huge intersecton. Across the road was Valencia City hall, a building with an impressive clock tower in the center and two side towers with brown dome roof. 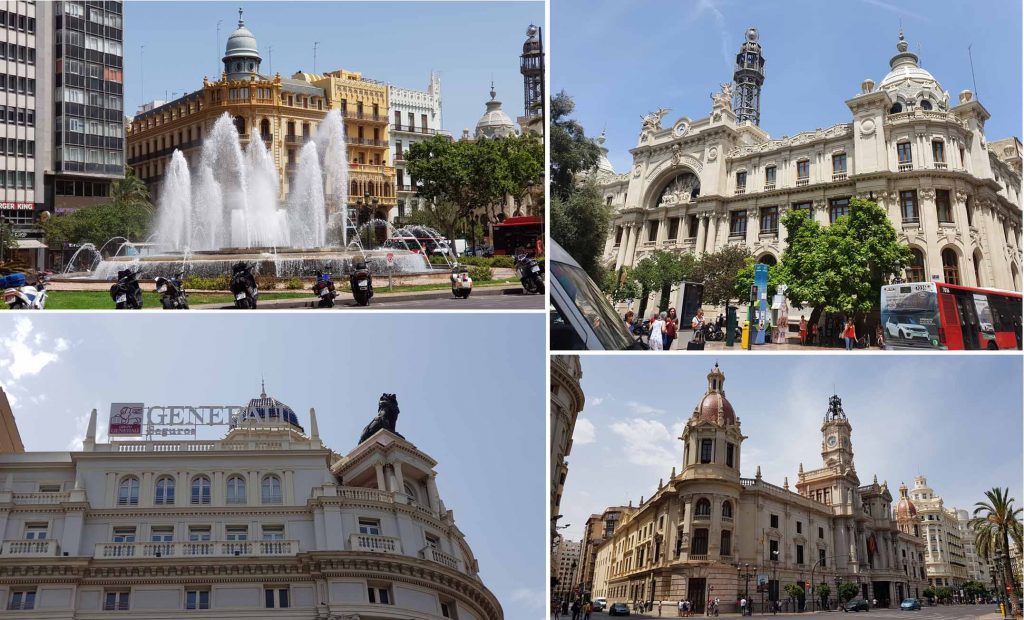 Walking another 400 m brought us to “The Central Market of Valencia”. Unfortunately it was already closed when we arrived at 3.15 pm. The gate of the market shutted at 3.00 pm and the guard told us to return the next day. 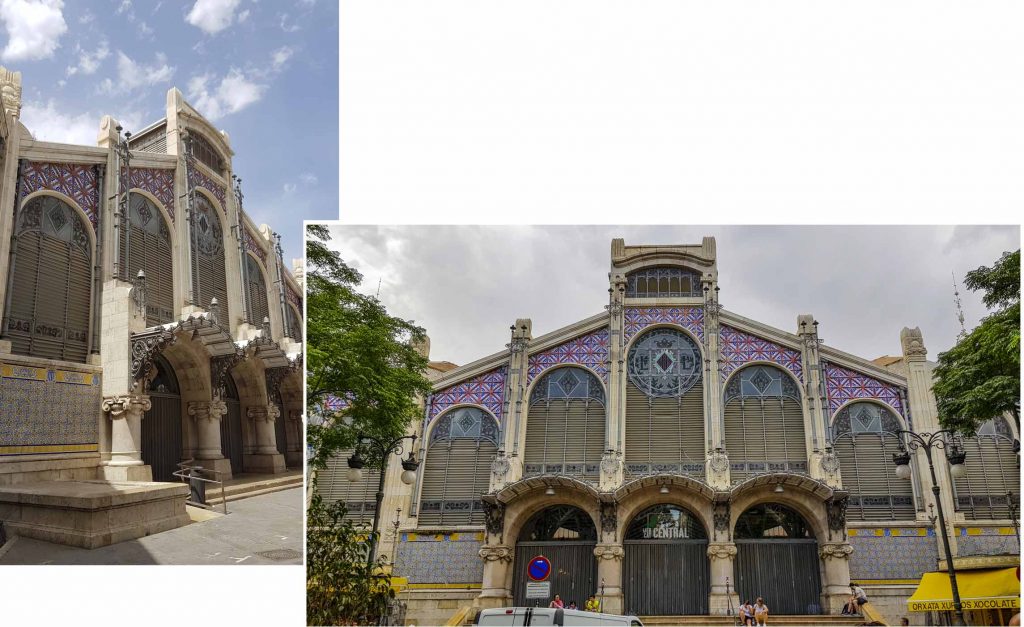 We walked around the circumference of the market but found all its gates closed. We just wanted to take a look at the famous ceiling of the market unfortunately there was no way to get in. So we would have to come back the next day. Beside the market were several old buildings and one of them was “Església de Sant Joan del Mercat” which had a beautiful bell/clock tower. 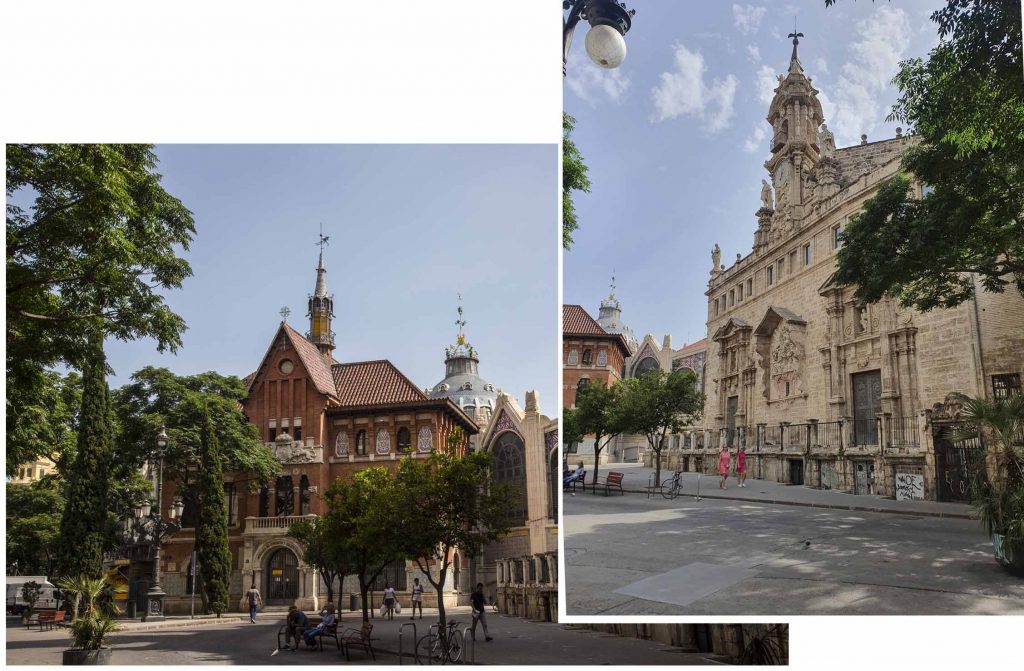 Buildings around the Central Market of Valencia

This part of town had less car, many of the lanes seemed to be for pedestrians only.  It was very pleasant to walk down the clean cobbered lane and take the time to look around, to look up at the colorful quaint houses/apartments on both sides of the lane or to look through the lane to see another cathedral at the end. 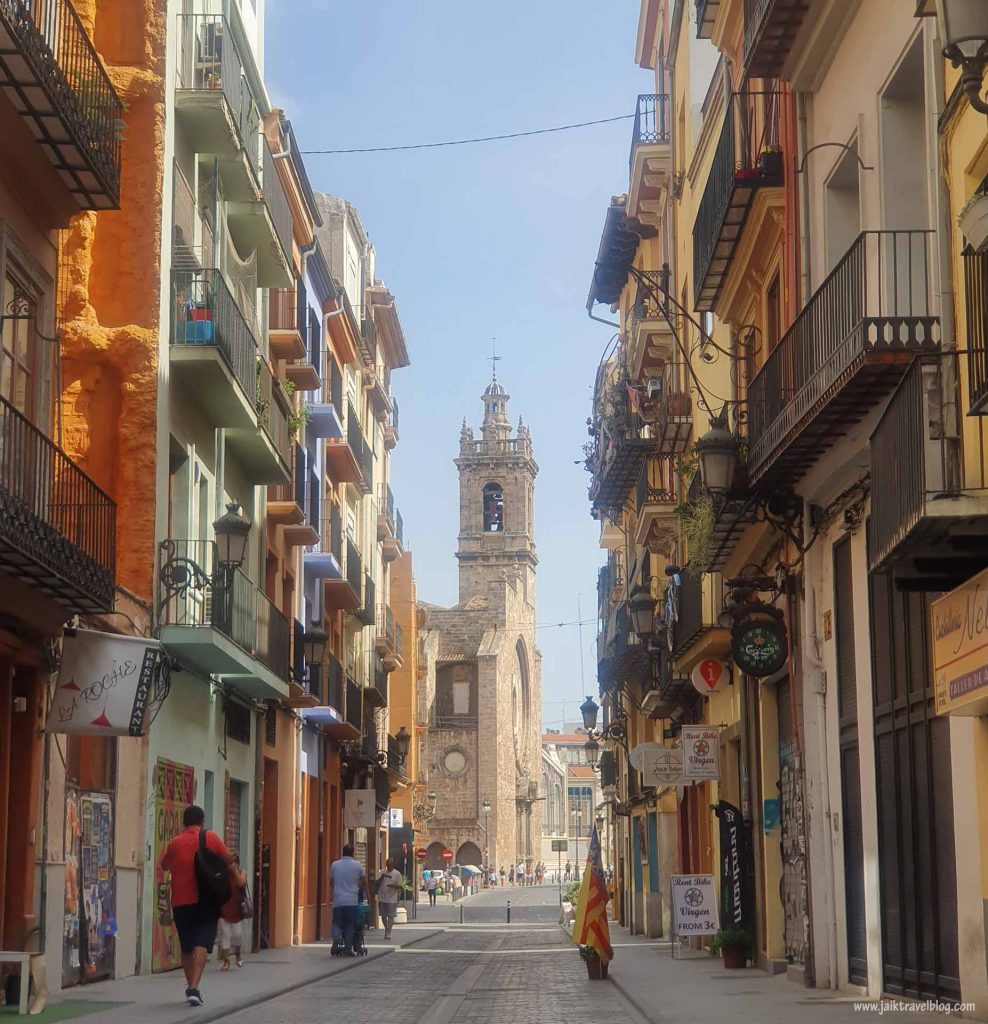 From the Central Market was a 400 m walk to the Cathedral of Valencia another beautiful old “dame”. Entry into the cathedral was €7 per person.  The cathedral was built on the site of a Roman temple in the thirteenth century. As usual the contruction took centuries and like most building that took centuries to build its design and style changed along the way. Generally the style of the Cathedral of Valencia was Gothic. 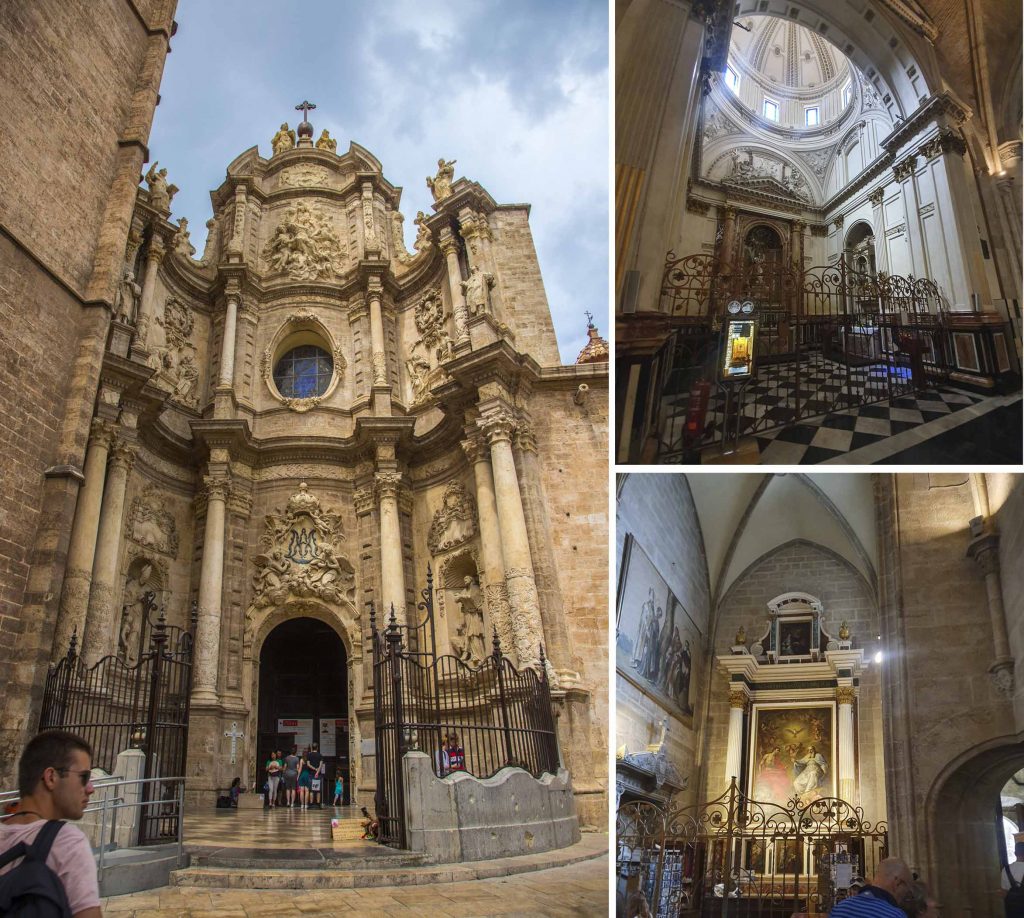 The next morning we walked from our stay to the “Central Market of Valencia”. It was a 1.7 km walk, which gave us plenty of opportunities to see other parts of Valencia old town. The nice thing about exploring on foot allowed us to stop and loiter around whenever a place/building/pedestrian lane caught our fancy.

Mid way in our route we came to the city gate “Torres de Serranos” (The Serranos Towers.) Torres de Serranos were considered the largest Gothic city gateway in all of Europe. It was constructed at the end of 14th century as part of the city’s fortification. 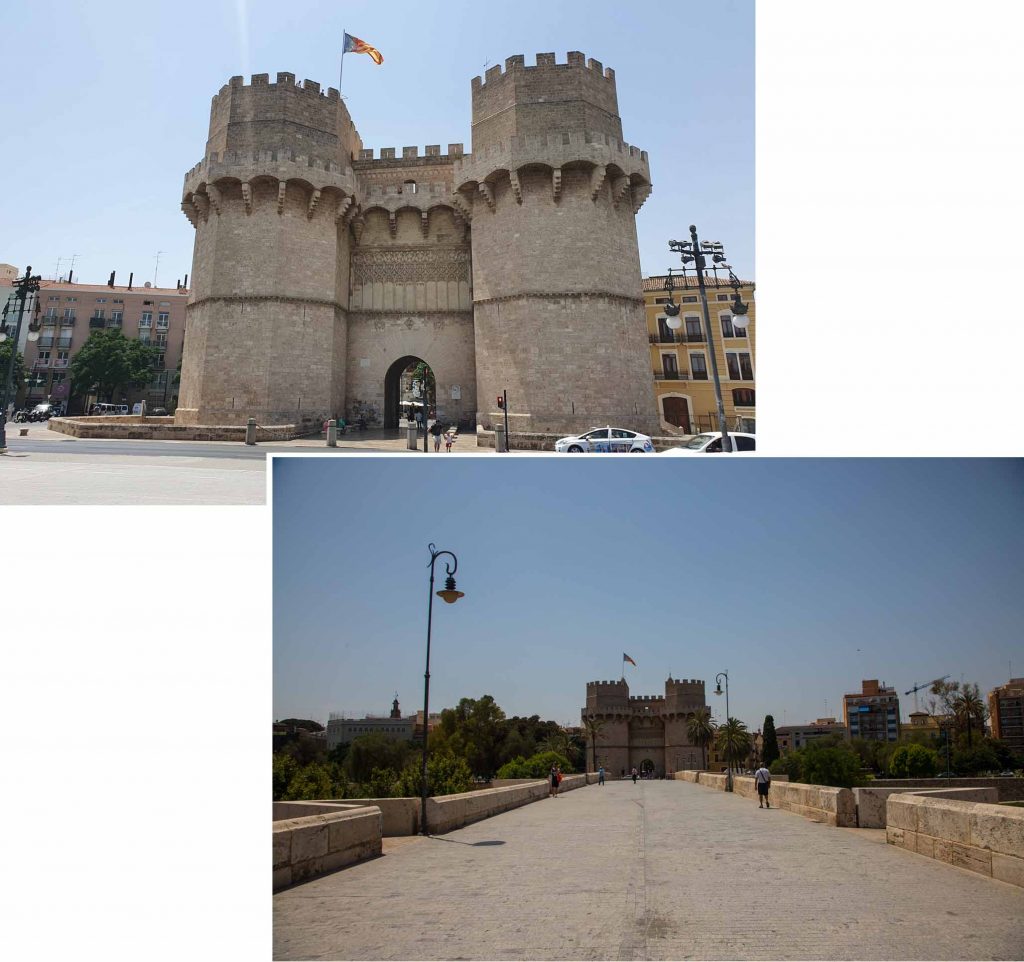 Another prominent building along our walking route was “Lonja de la Seda”, The Valencia Silk Exchange. It was considered a masterpiece of late Gothic architecture. It looked like a old Medieval castle with its tower and battlement (protective tooth shape parapets). The building had been declared by UNESCO as part of Humanity’s Heritage for the roles it played in history, in the silk-route. 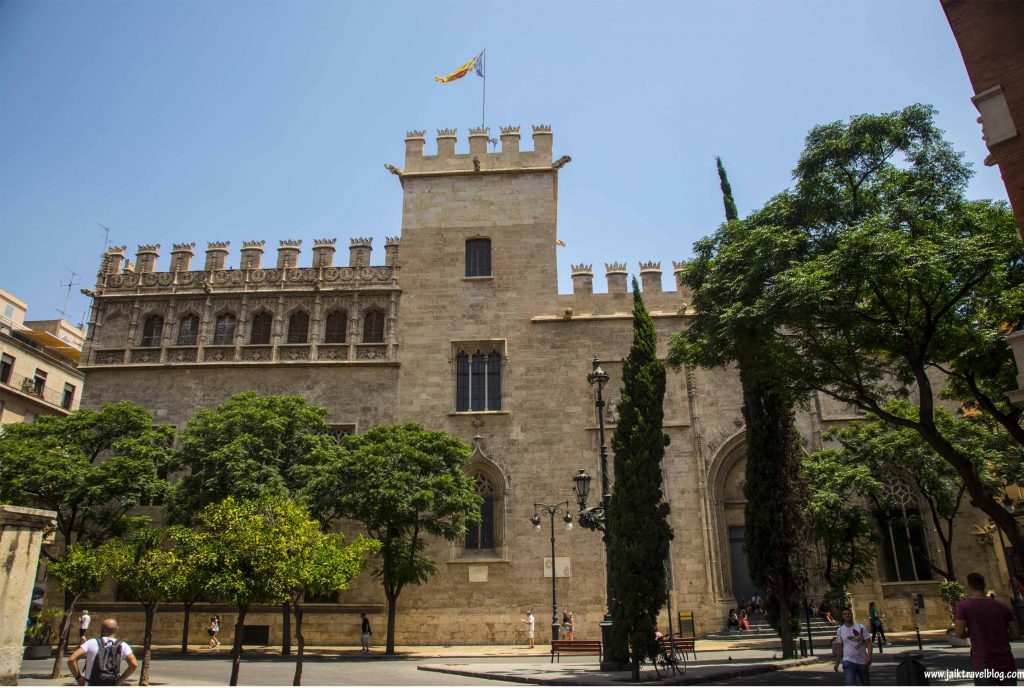 We reached the “Central Market of Valencia” at about 11.30 am and the place was packed with people. The market was so much bigger than we expected, it was huge with many lanes and stores. 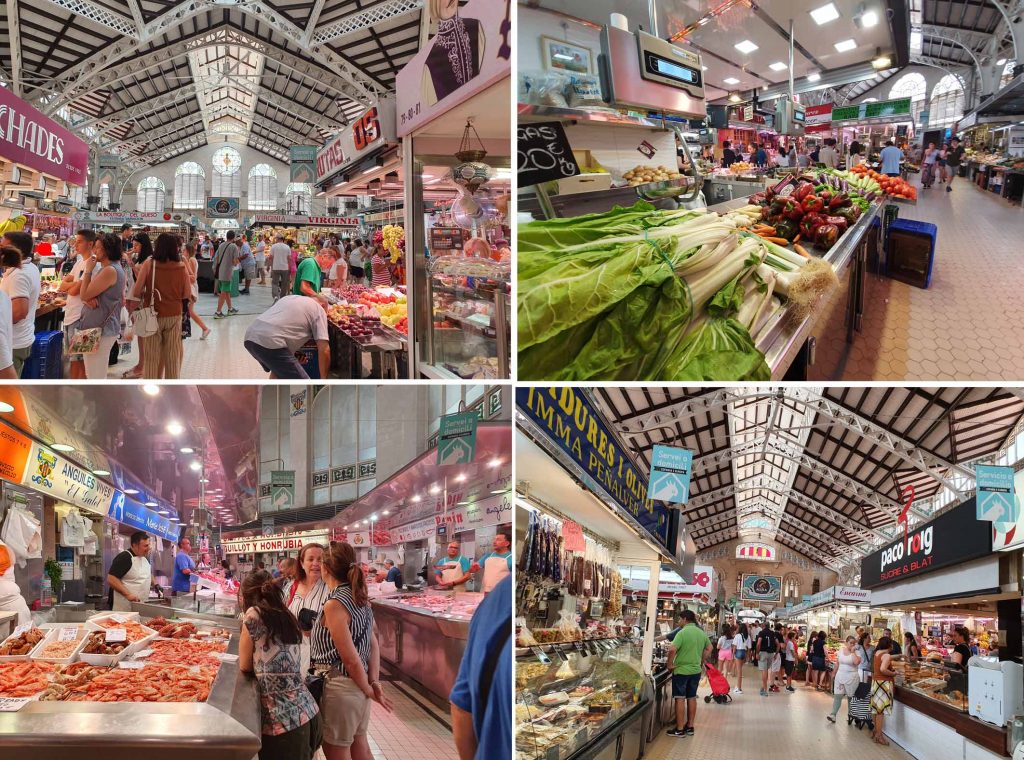 This market was one of the largest in Europe, it covered more than 8,000 square metres with a predominantly Valencian Art Nouveau style. The market had two beautiful dome roofs. One of the domes had attached slope sections that gave it a beautiful “star” shape. 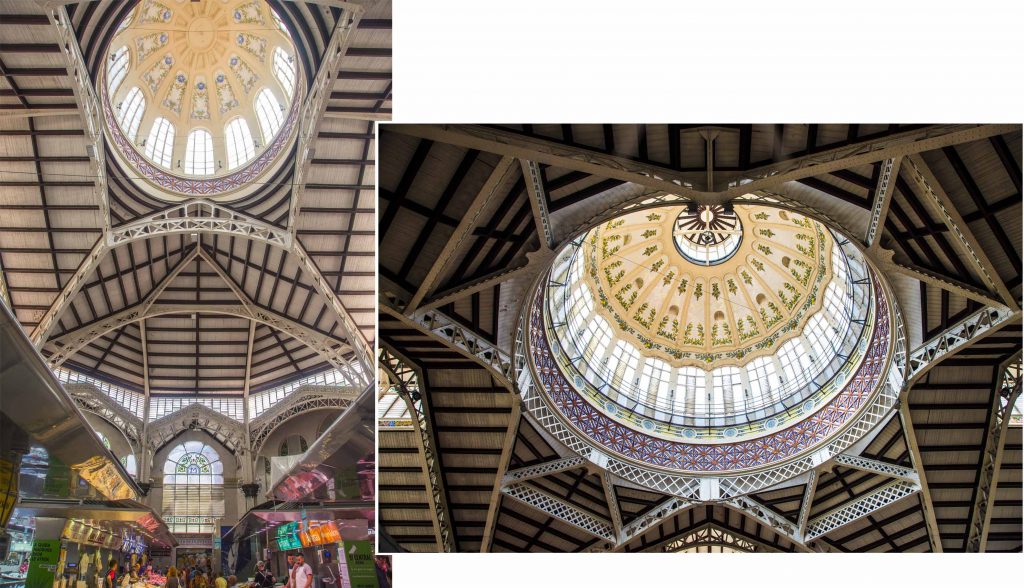 We found  seafood, raw meat, fruits, pastries, wines, oil, etc etc in the market and the prices was not overly expensive, they were pretty reasonable. This seemed like a market catering to the locals and not tourists. We had a great time exploring the market. We bought a couple of  bottles of Truffle oil and some Spanish Cured Ham to bring home for the family in Singapore! 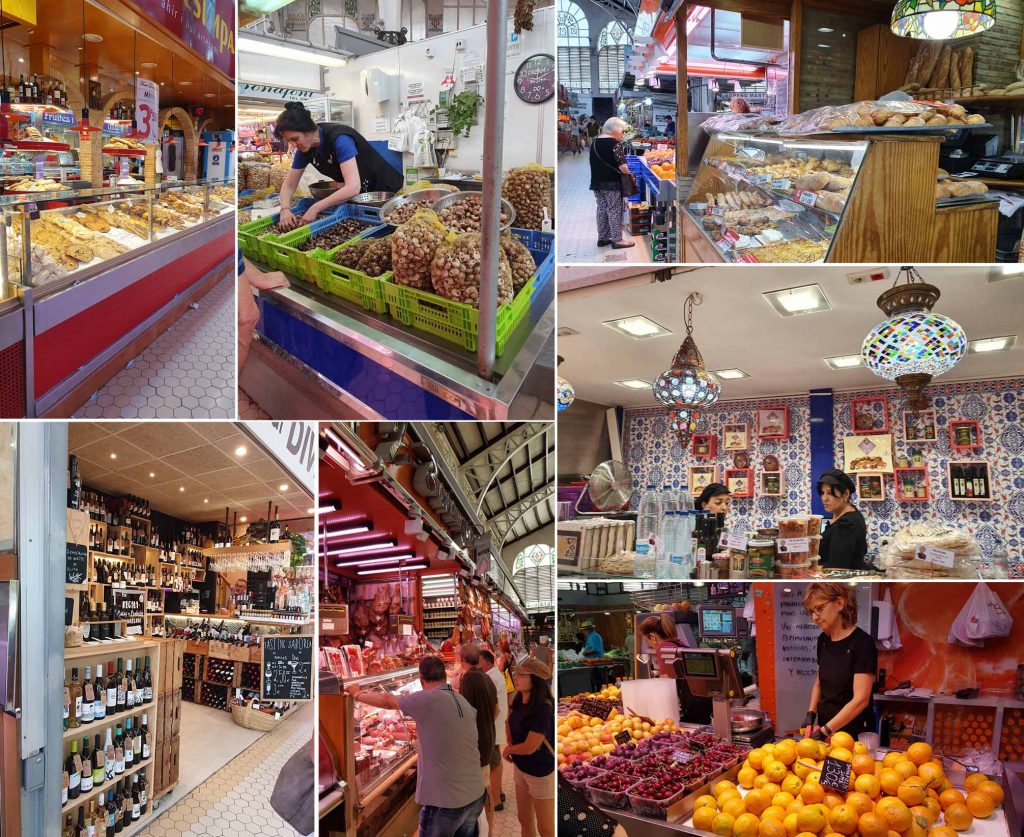 Valencia was located near the coast, it had a famous beach where youngs, olds, locals and tourists like to visit. From our stay to the beach was about 6 km. We could go to the beach by public transport ,which was available right outside our stay, but we decided to drive as on google street map we saw parking near the beach so parking was definitely not a huge problem.

Route from stay to the beach

On arriving at the beach we looped a couple of corners and found free parking. It was free public parking but we still had to “pay”. There were several “Africans” on bicycles cycling around “directing” drivers to empty lots. We found an empty lot but before we could park our car, an African arrived and “acted” to direct our car into the lot even though we did not need his help We felt pressurized into giving him an euro for his “un-needed” assistance because we did not want to come back to a “damaged” car. Maybe we were being paranoid but we rather be safe than sorry. 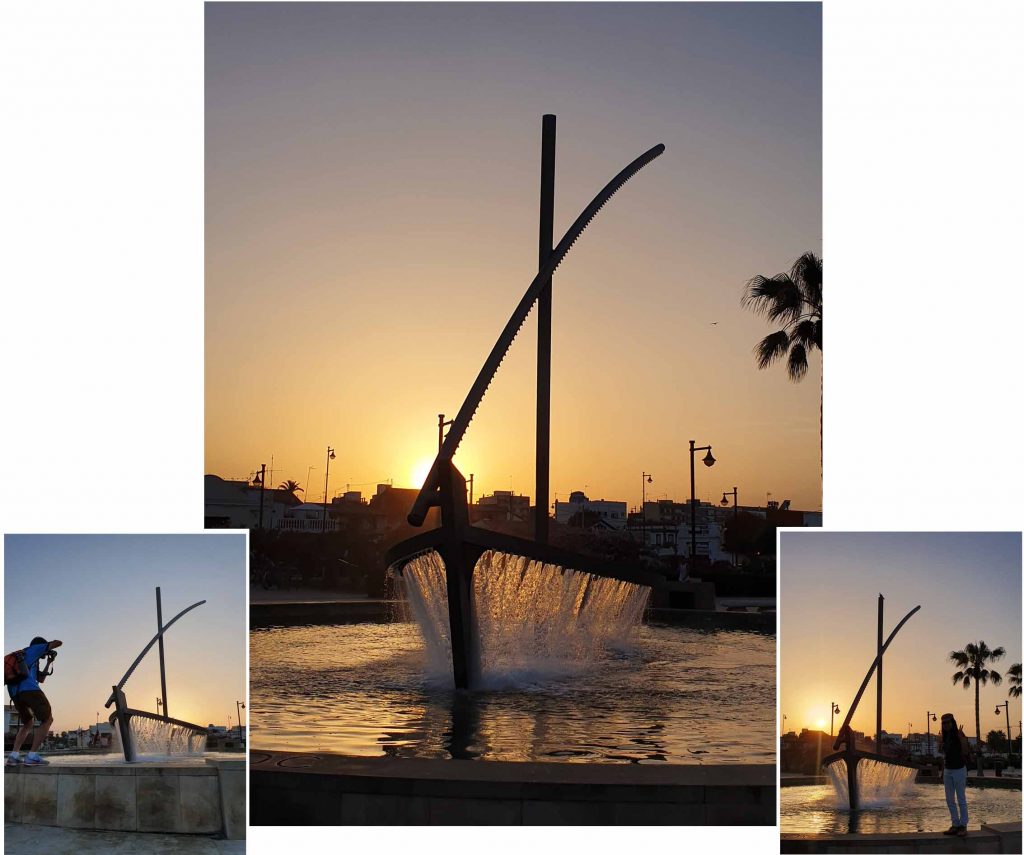 Boat fountain at the beach

There was a beautiful boat fountain at the beach. Unfortunately not all its water nozzles were working. We remembered seeing a picture of the boat with sail, but in our case the “sail” was not visible as the nozzles on the “sail” had no water streaming down.

After the sunset we walked down a promenade by the beach to a famous “Paella” restaurant, La Pepica. 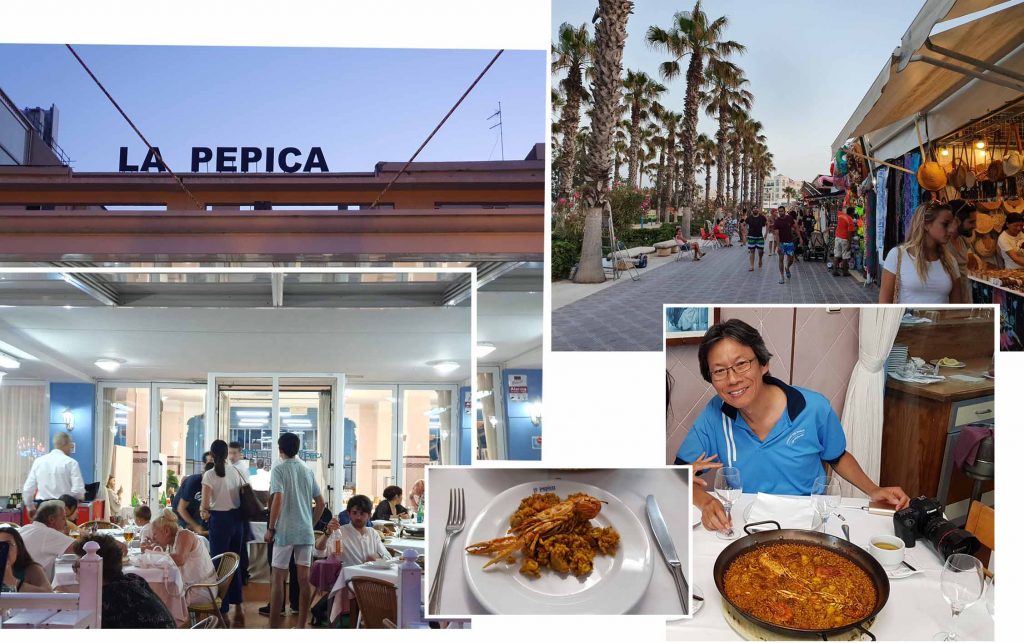 Paella was Spanish National Dish and it originated from Valencia. So we were eager to have a taste of the Valencia Paella. La Pepica was a recommendation from Jordi, the host of our “stay” in Valencia. He considered La Pepica his favourite paella restaurant in Valencia.

We had seafood paella and waited for more than 45 minutes for it to be served. For me the  paella did not taste as good as the one we had in Madrid. But Yat Thong thought otherwise.

On the second evening we visited the Valencia City of Arts and Science. This part of town showed an ultra modern facade of Valencia. We drove to the art center which was about 5.5 km from our stay. There was plenty of free parking near the art center.  We parked along one of the many parking lots along Passeig de l’Albereda (co-ordinates: 39.460368, -0.355471) and walked across a garden to reach the art center. 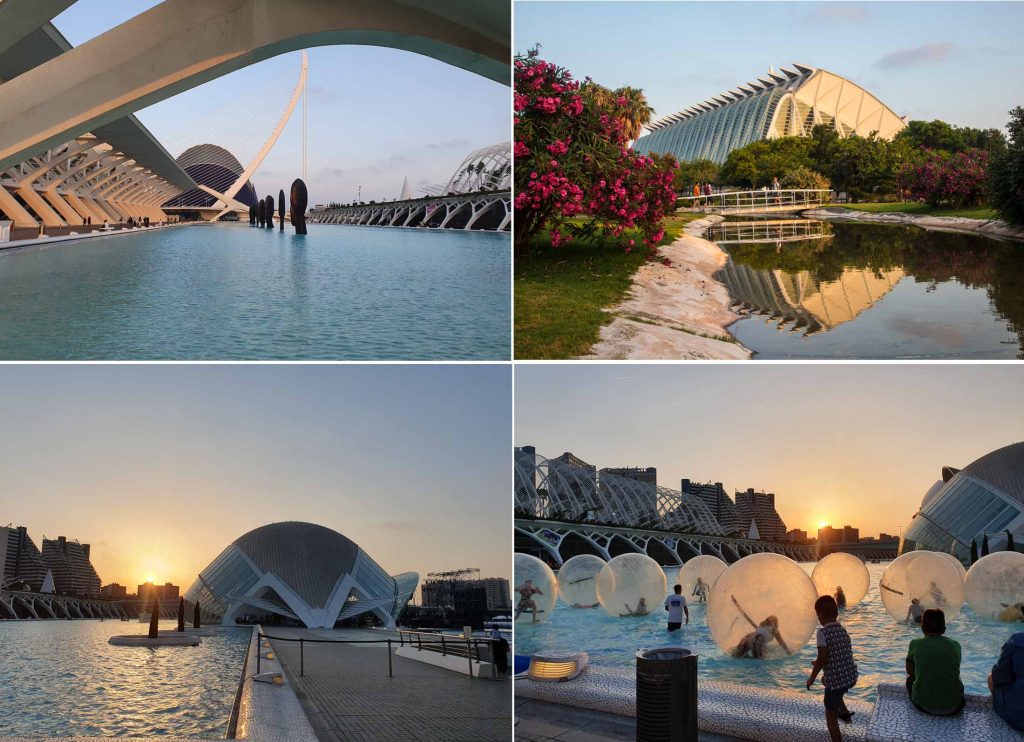 The City of Arts and Sciences was a popular place with the locals and many families with there young children were having a great time  at the “city”.  It was certainly a nice place to have a after dinner walk. 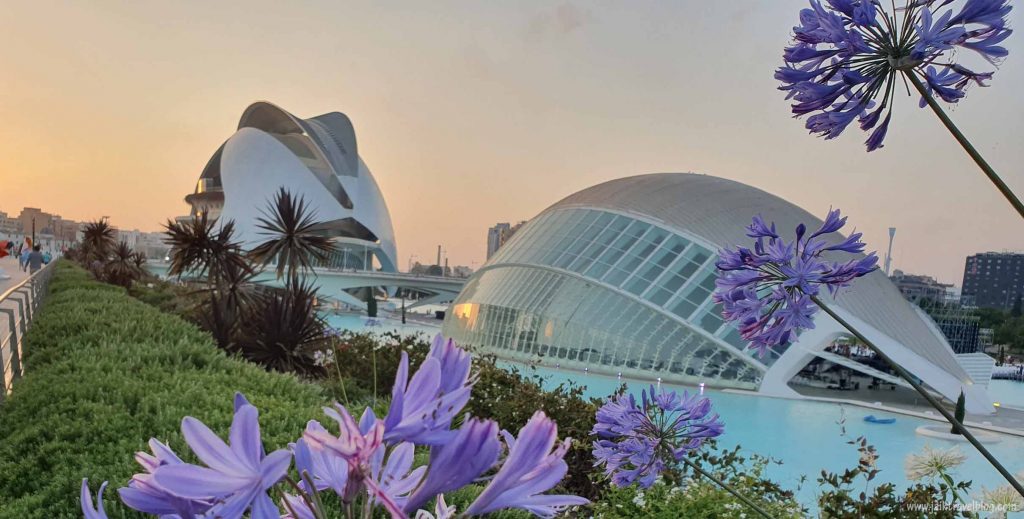 City of Arts and Sciences

The city complex was very beautiful, at certain angle it looked like two beautiful gigantic sea shells. We especially like the pleasing white and blue coloring of the complex. The complex looked as beautiful in daylight as in nightlight. We stayed late till the sun webt down.

City of Arts and Sciences

Our stay at Valencia was at “Simply different”, a beautiful apartment from Airbnb. We paid €113 for two nights which was pretty good value for money for the entire apartment. The apartment was much larger than we expected. It had two sitting areas, the one in front  of the house had a computer on a huge desk and a three sitter couch.  A long corridor linked the front to the back part of the house and along the corridor were doors opening into a small bedroom and a toilet/shower. 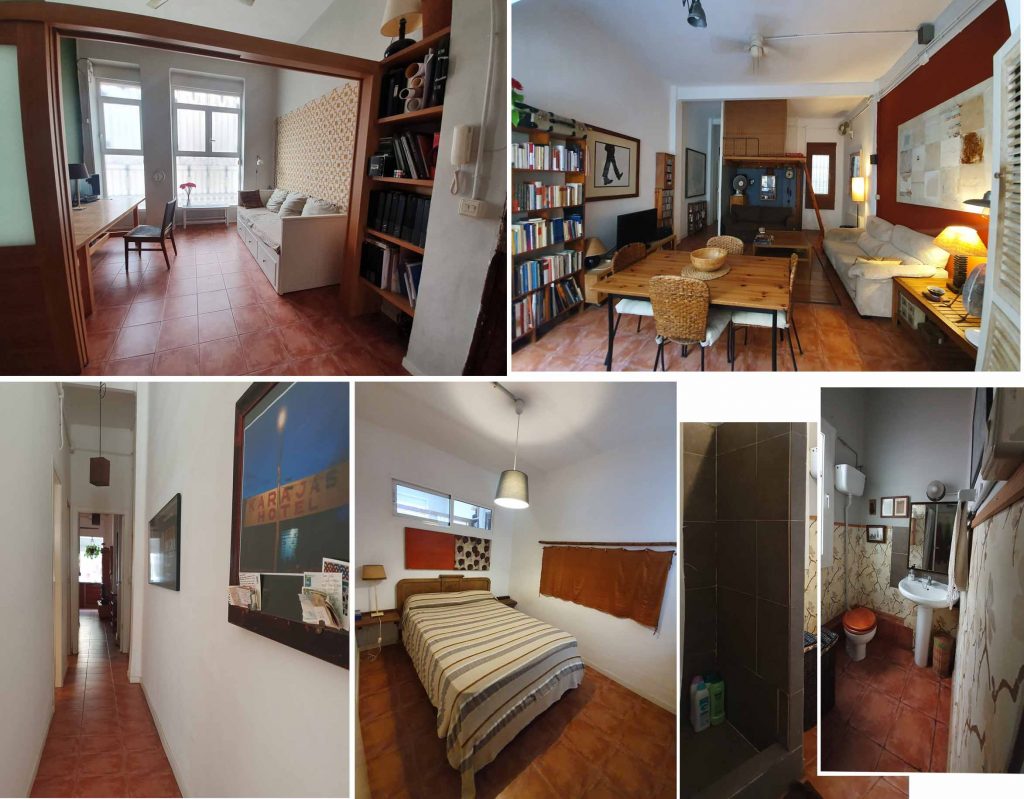 Our Airbnb stay at Valencia

At the back part of the house was a larger sitting room which adjoined a dining area, a kitchen and an open courtyard. The entire place had this cosy ambience and we loved it at first sight. 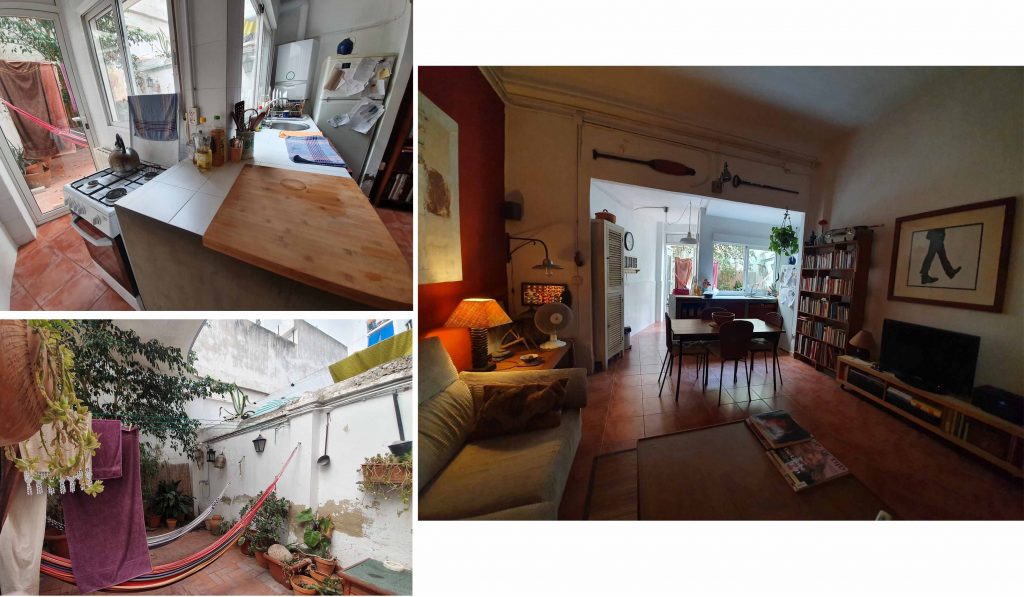 Our Airbnb stay at Valencia

Unfortunately our stay of two nights was not as comfortable as we anticipated. The place was hot despite the many fans in the house. Even when we directed the fans on our bodies we could not feel the wind.  As for the hot water heater (gas) it was not delivering hot water despite it being new. I managed to get a hot shower the first evening but Yat Thong had no such luck. As for the second evening we both had cold shower! Our host lived an hour away and there was nothing he could do for us late in the night. Hopefully with our feedback about the fan and the water heater things would get better for others.

We cooked three meals at the apartment, and one of the meal was pork ribs with cheese! 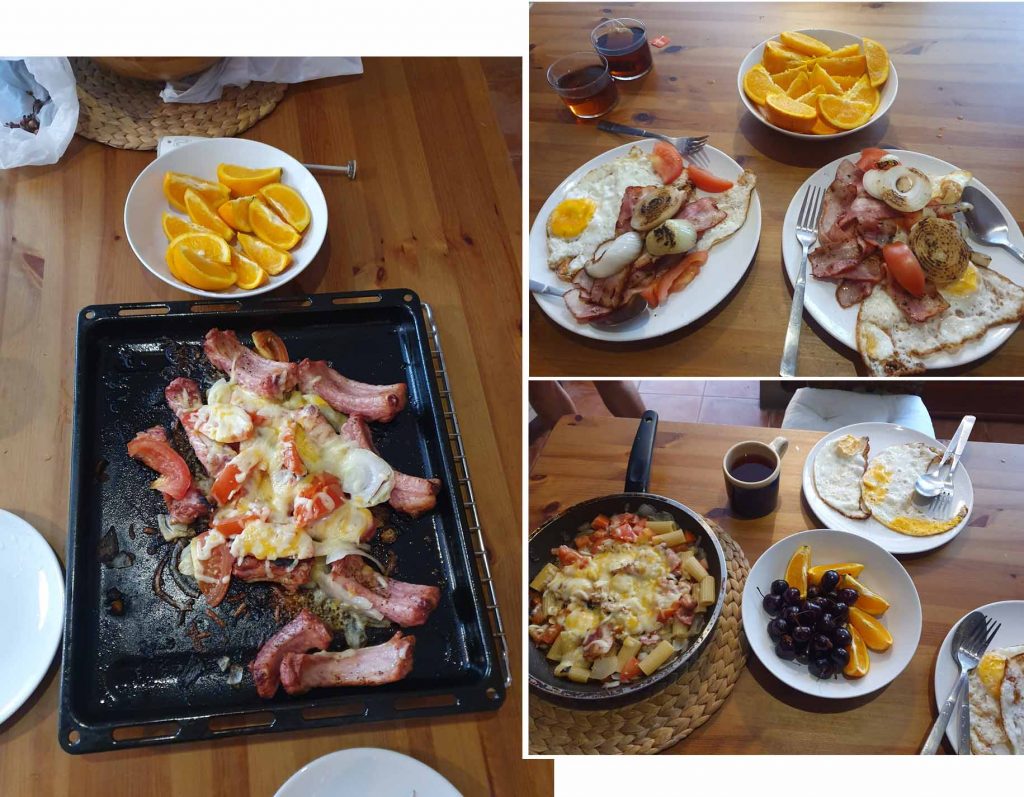 Our diy meal at our stay

For our stay we managed to find free street parking near to our stay. Actually, not that near about 500 meters away. There were plentiful of parking places unfortunately they were often filled. So each time after we returned to our “stay” we had to loop around slowly and patiently before we could find an empty lot. Parking was free.