We were on the final leg of our road trip. Wow! It was 53 days ago when we first picked up our Citroen car at Tolouse and  soon it was about time to return the car to the same outlet in. Time certainly passed quickly when were were enjoying ourselves days after days.

We could drive directly from Montserrat in Spain directly to Toulouse International Airport in France. It would be a 300 km drive northward which would take about 4 hours. We were not in a hurry to leave so we broke our final leg into two stages. We made a stop at Val’d Aran a famous  valley in the Pyrenees mountain and continued the 2nd stage of the route to the airport on the next day. We flew out of Toulouse International Airport at 5.35 pm, transit in London for 1.5 hours and touched down in Singapore some 17 hours later.

Getting to Val d’ Aran

The thought of driving four hours from Monsterrat to Tolouse and then to board a plane for a 17 hour flight home was unbearable. We needed a “peaceful” break before being “cooped” up in an enclosure for 17 hours! One possibility was to spent a night relaxing in Toulouse before flying out the next day, but relaxing in a “city” was not our cup of tea so we picked “Val d Aran” a beautiful valley in the “Pyrennees mountain to stay for a night. 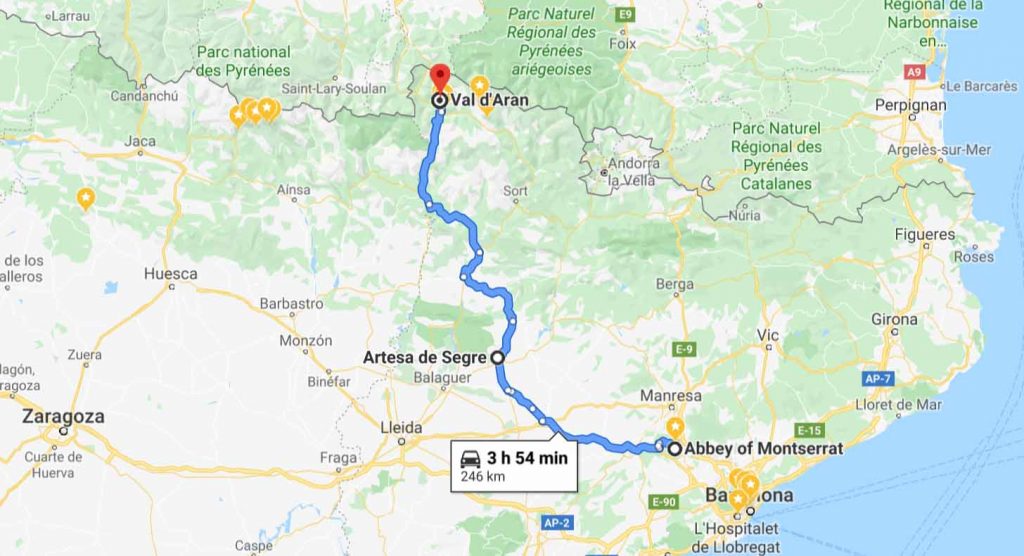 It was a 4 hour drive to Val d’ Aran, passing through quaint towns, beautiful valleys and mountains. We stopped at a town “Artesa de Segre” for a coffee break. There we saw an interesting cafe “L’ Eixda” with a huge bright yelliw signboard and went in for our cafe latte. 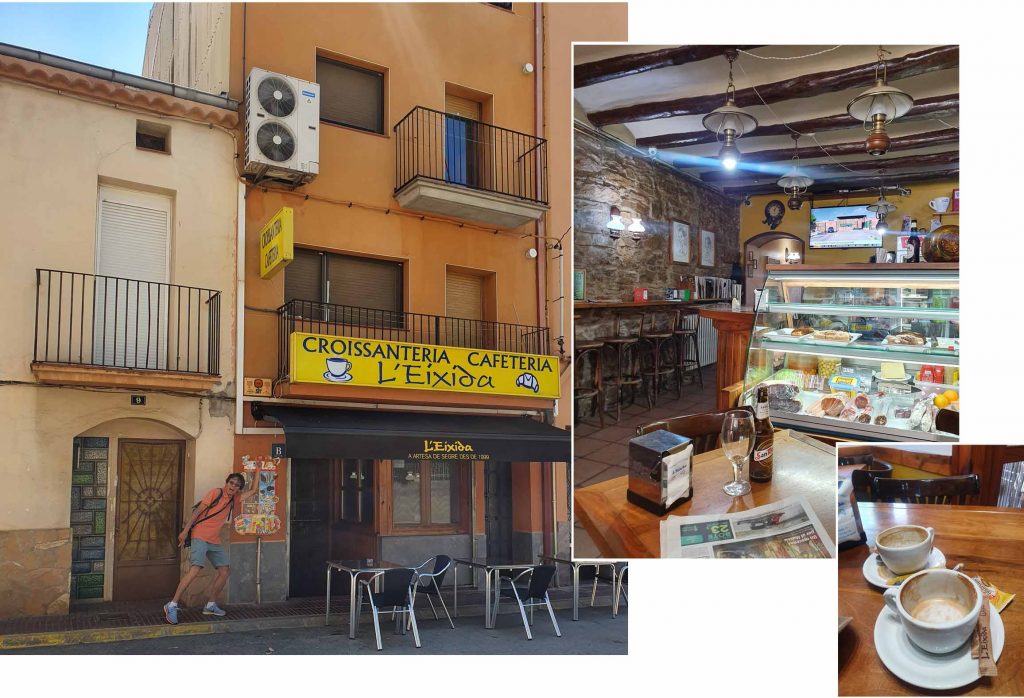 After a nice break we continued the rest of he journey to Val d’Aran. We stopped at a village, Vielha. The village  did not have a typical Spanish village “look”, it looked more like a “Swiss Village” or an Italian village in the Dolomites. Vielha was a ski resort village so it was not surprising that the village was a quiet place in summer.

Near Vielha were several hiking trails that led into the Pyrennees Mountains. Since it was near the end of our road trip, we were “winding down” and were not up to an energetic walk. We spent the rest of the day in our “hotel” doing nothing, feeling a bit sad because our trip was coming to an end and feeling a bit excited as  we would be seeing our love ones soon.

We stayed at RVHotels Tuca which was reserved on booking.com. It was a double room for €77 a night and it came with breakfast. Parking on site was free. RVHotels Tuca was located just outskirt of village center about 2 km away. 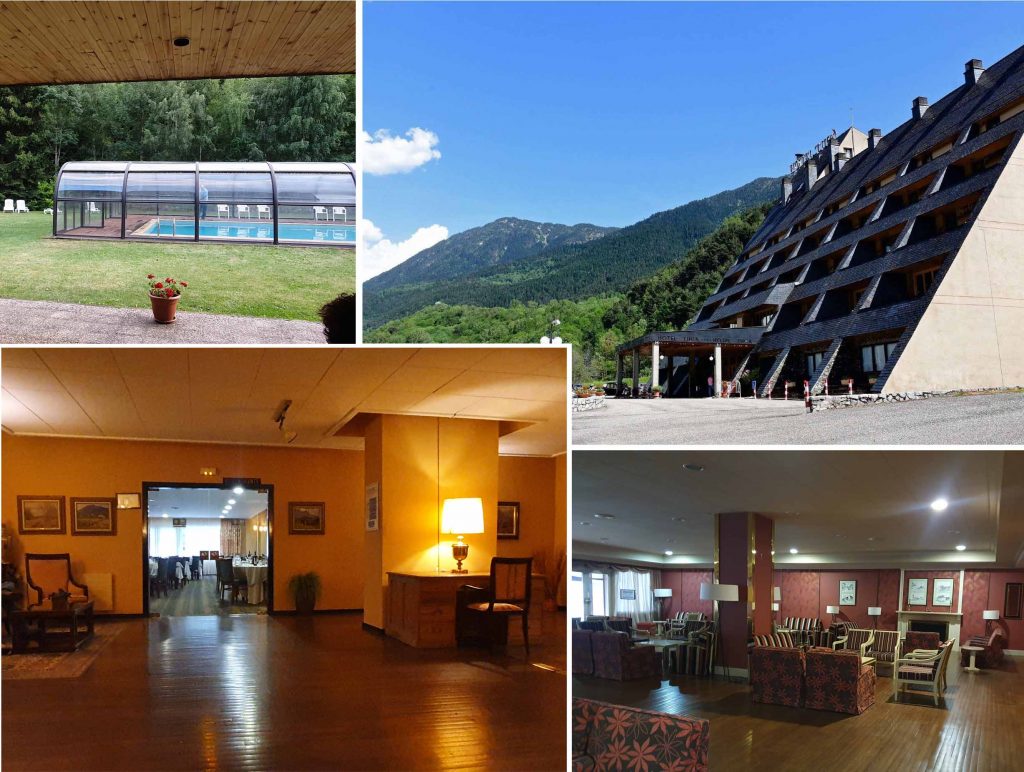 We had a double room with twin bed on the third level of the hotel. The room was big, clean and comfortable. Our ensuite bathroom was big and clean too. The hotel seemed to “old” but was still very well maintained. 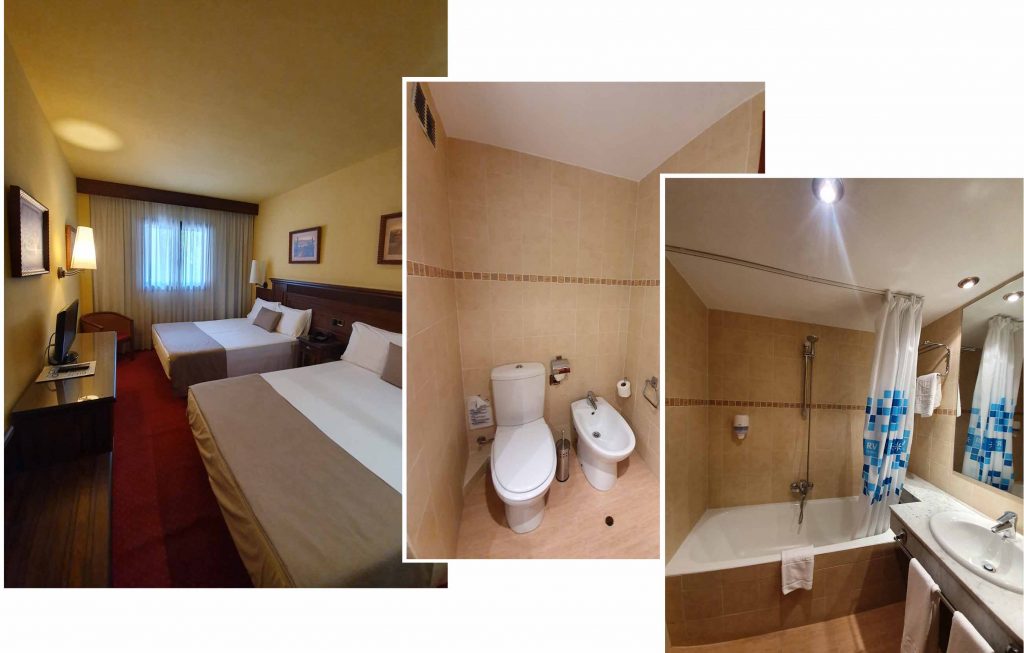 Our room and ensuite toilet

The hotel had a nice restaurant and it offered buffet dinner at €18 per person. Eating in was just nice for us as it saved us a trip into the village center. Before arriving at the hotel, we had a short stop at the village center and found most of the restaurants and cafes shut. We were not sure if they were shut for afternoon siesta or for the “lull” period. We were glad to find food at the hotel. 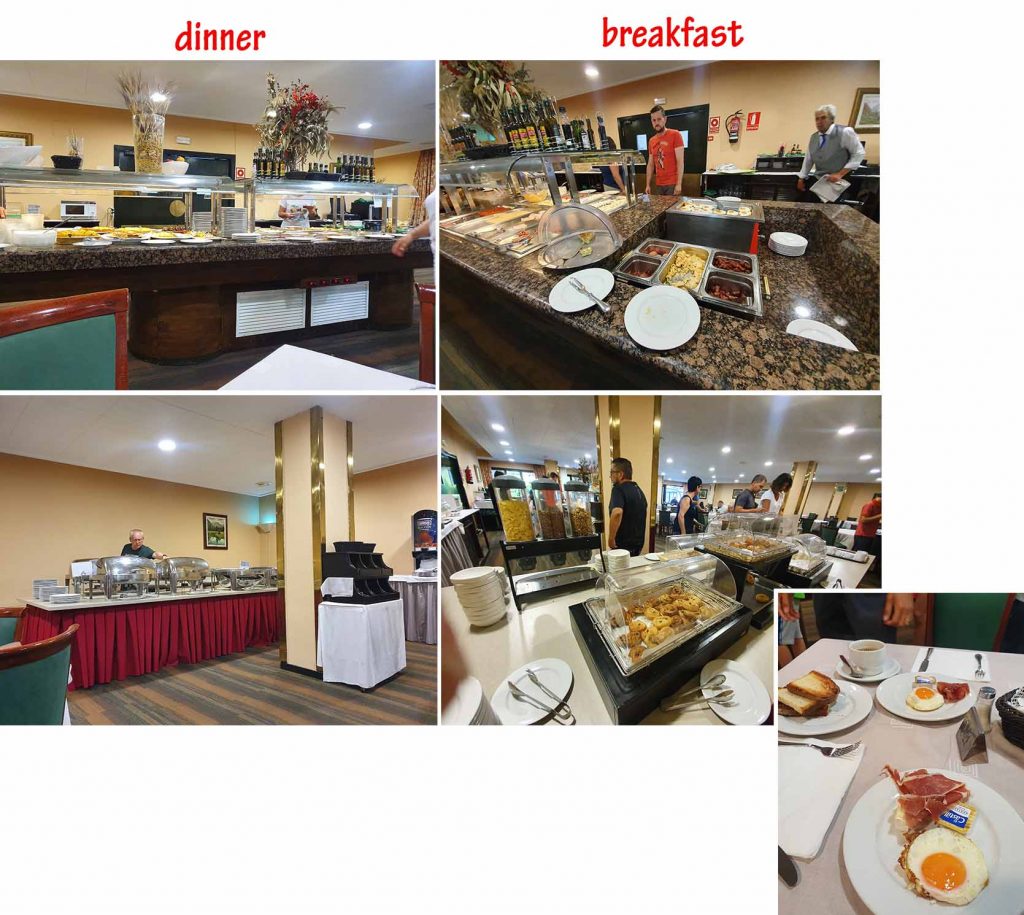 Our meals at RVHotels Tuca

The next day we left Vielha at 11 am and in about 25 minutes we crossed Spain border and drove into France. In another half an hour we stopped at a highway rest stop for a coffee break. The coffee break was at “Paul Cafe” and the pricing was no longer the “inexpensive” deal that we were getting on the Spanish side. 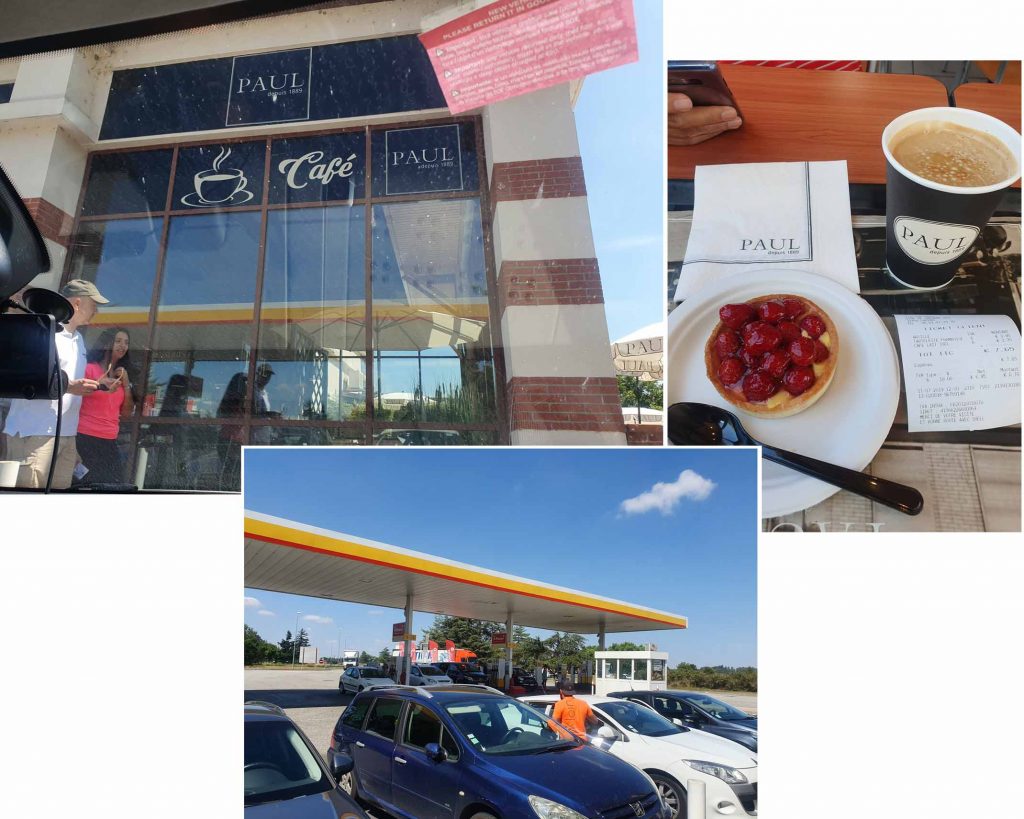 Coffee break at Paul on the France side

At about 1 pm we reached Peugeot Open Europe outlet to return our Citroen Car. Returning the leased car was a breeze. Since the car was fully covered by insurance there was not even an attempt by the attendant to check for scratches or damages to the car. We just signed off and hopped onto a white van that sent us to the airport with our bags. 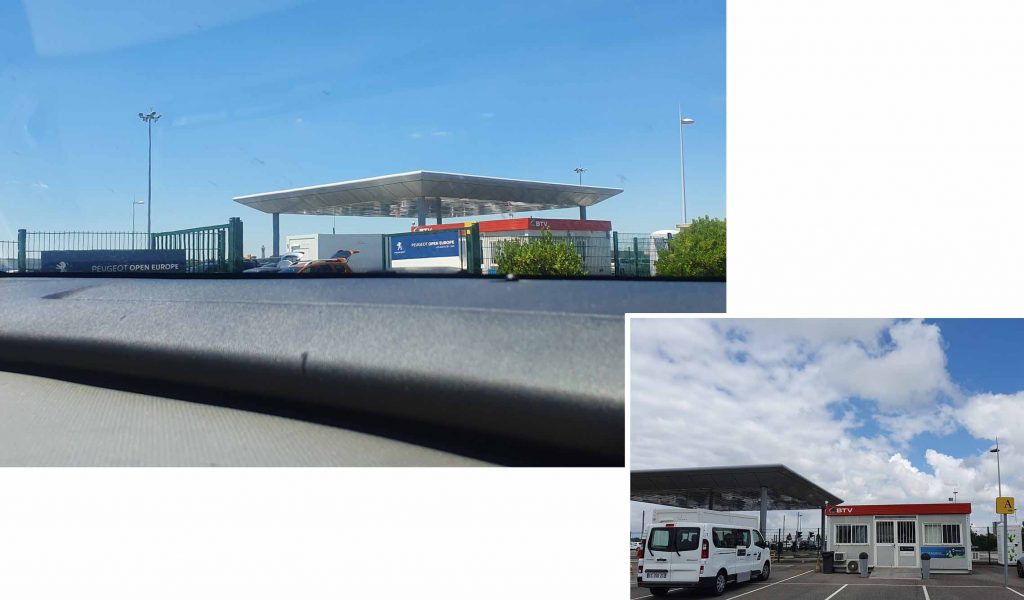 We checked in at about 2.30 pm, waited for about three hours to board the plane, a British Airways flight and touched down at Heathrow airport about 2 hours later. Transit at Heathrow was pretty easy as this time round I was very careful with the items packed in my backpack.

My experience 53 days ago at the same airport was “awful”. I had left a small tube of sunblock in my backpack. I did not put it in a transparent bag and took it out before putting my backpack through the security scanner. So my backpack got diverted to a separate queue where it was “empty” out and itemly checked by a female security staff. She was so careful inspecting item by item in great detail. Each bag inspection took about 20-30 minutes and there was three ladies infront of me. So by the time I got back my “inspected” bag it was an hour later! 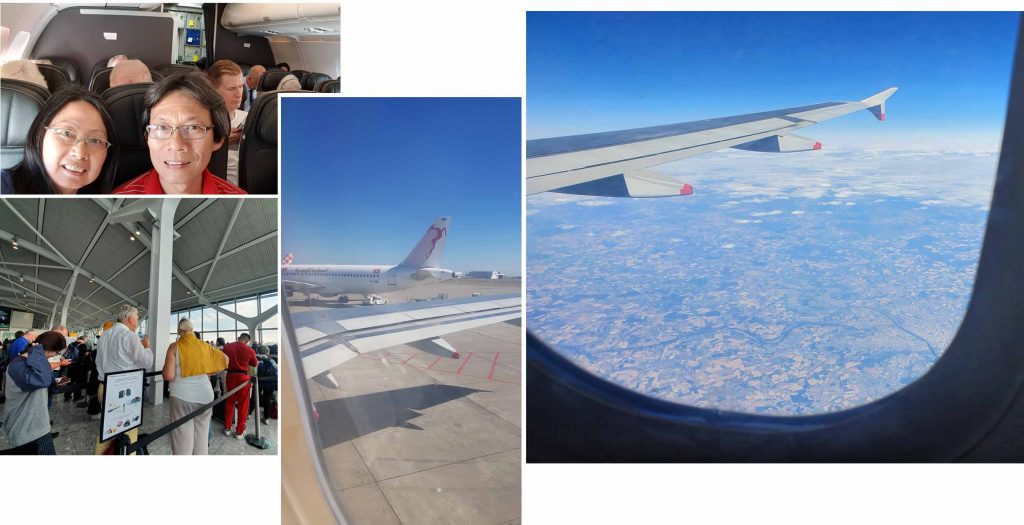 This time transit was smooth, after 1.5 hour we boarded a second plane and in another 13 hours and 10 minutes we reached home!