New Norfolk was midpoint on our way to Mount Field National Park. The drive took only 30 minutes. Our destination was “Dervent Cliff Walk” which overlooked River Dervent. 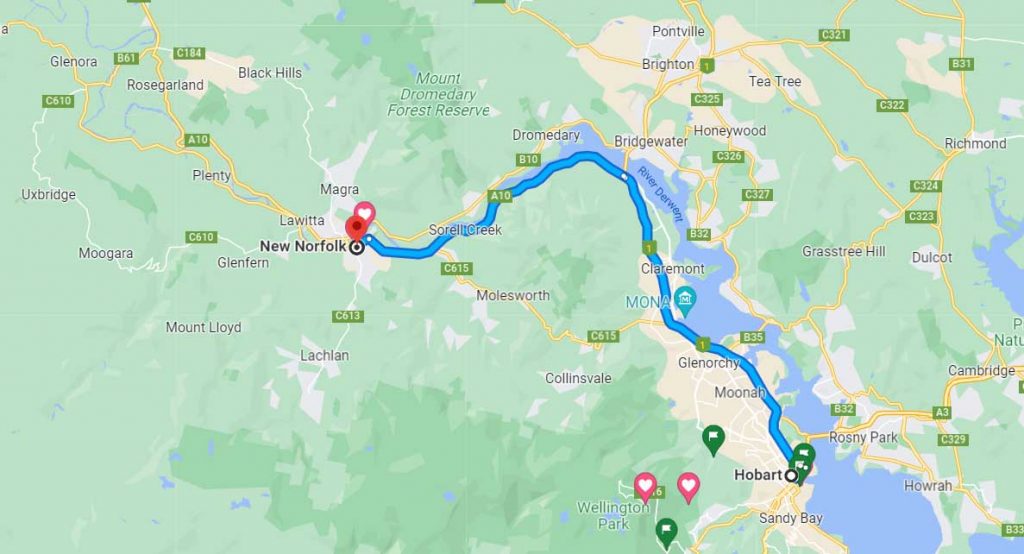 We parked our car at a carpark by the river and walked along the river. We ground was wet and slightly muddy so we forwent our trek uphill. We took a couple of shots, the scenery was nice but not spectacular. From many of the photos posted online this place would be very scenic in on a clear day with reflective water surface and blue sky. 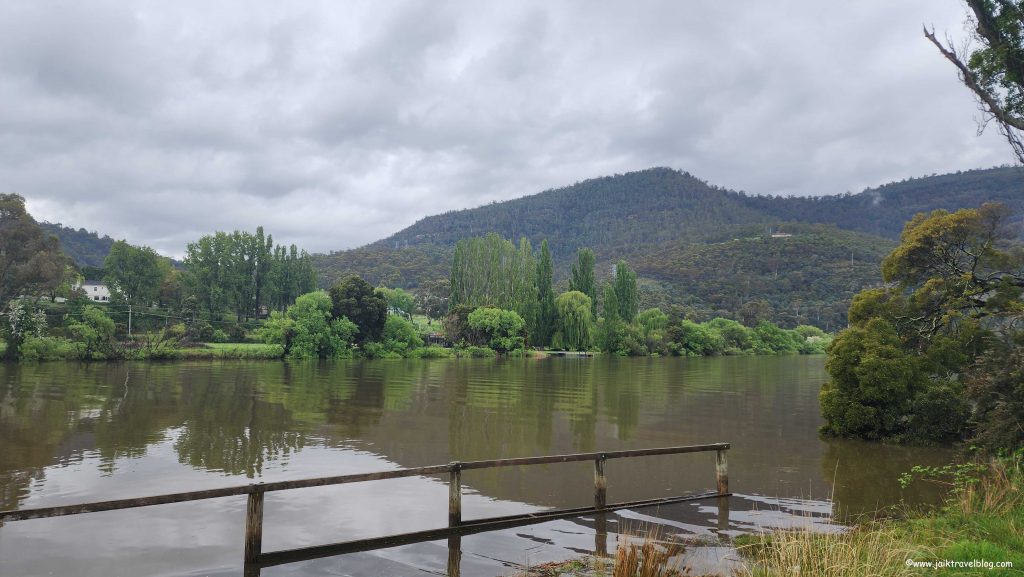 In New Norfolk we found Woolworths which was just nice for us to stock up our grocery for the next two days. At the large Woolworths there were plentiful of choices which we were sure would not be available in the small town “Maydena” near to Mount Field where we would be staying for the next two nights. 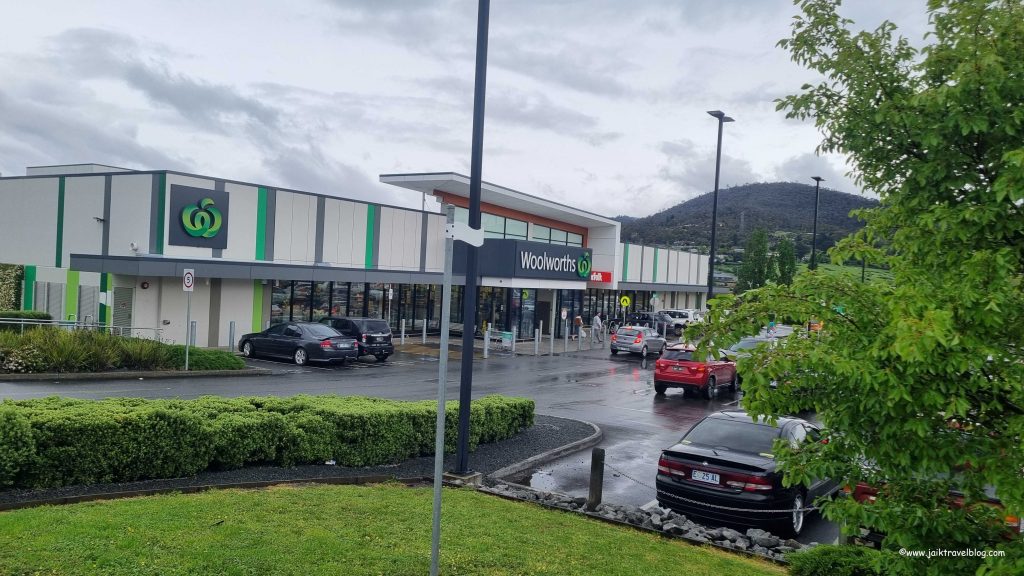 On way to Mount field

Our destination for the day was Maydena which was a short distance to Mount Field National Park. We had chosen to stay in Maydena as it was nearer to Mount Field than New Norfolk town and would be a better start point to Lake St Claire after Mount Field.

It was a very scenic route which took us over acres of  never ending greenland. There  was a stretch that reminded us of  the green fields of Tuscany in Italy. We never knew that such beautiful scenery existed in Tasmania or we would surely book an accommodation nearby to enjoy the view day and night. 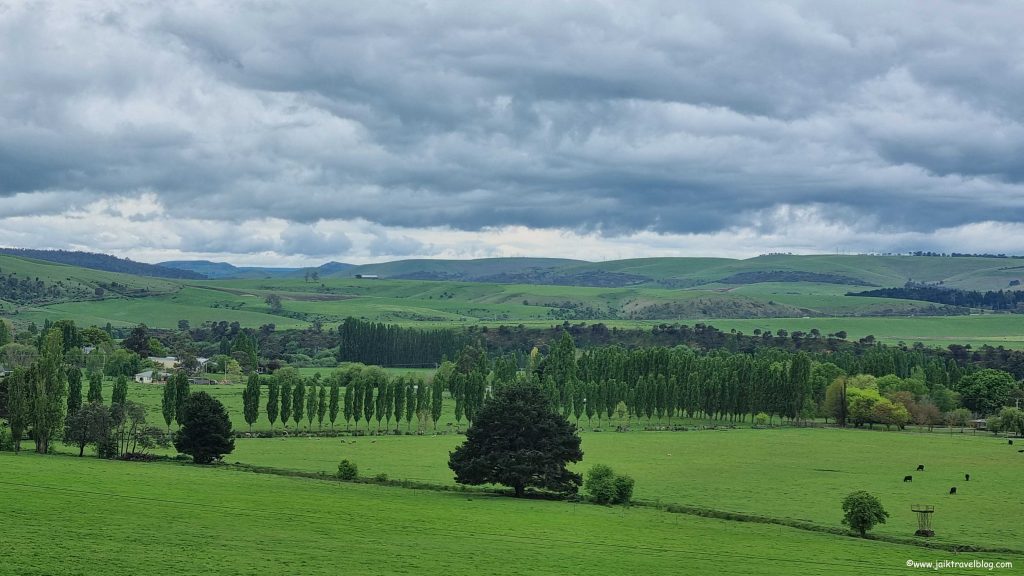 It was about 10 am when we left our stay in Mayden to Mount Field National Park. We arrived at the carpark outside the visitor center and saw a huge sign board that stated that Park Pass was required for all visitors to Mount Field.

We had bought our “2 month all Park Pass” online when we were at EagleHawk Neck. Unfortunately we did not have a printer to print out the Pass and displayed it on our car. 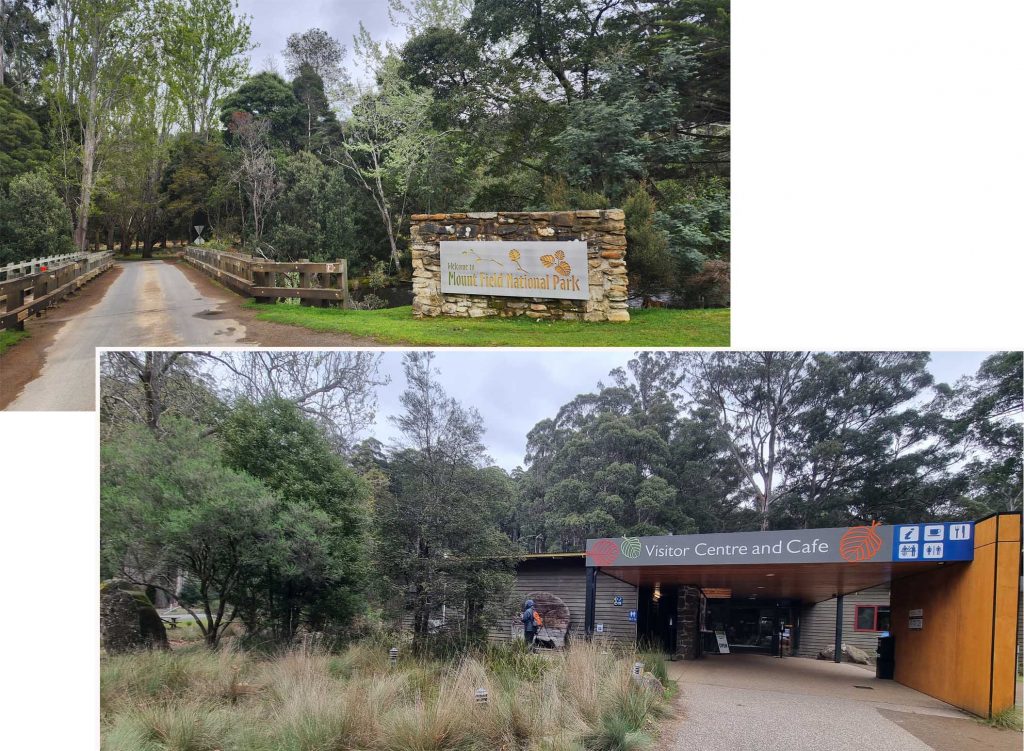 Visitor Center Mount FieldThe staff at the Visitor Center was kind enough to print the Pass once we gave her our Pass Number. She even helped us to remove the car registration number which we had earlier entered, as since then we had changed to a different rental car (the car change was requested by our car rental company). In fact for tourists it was optional to provide the car registration when buying the pass. We supposed that if the Pass was bought before arriving in Tasmania, there was no way to know the registration number of the rental car then. 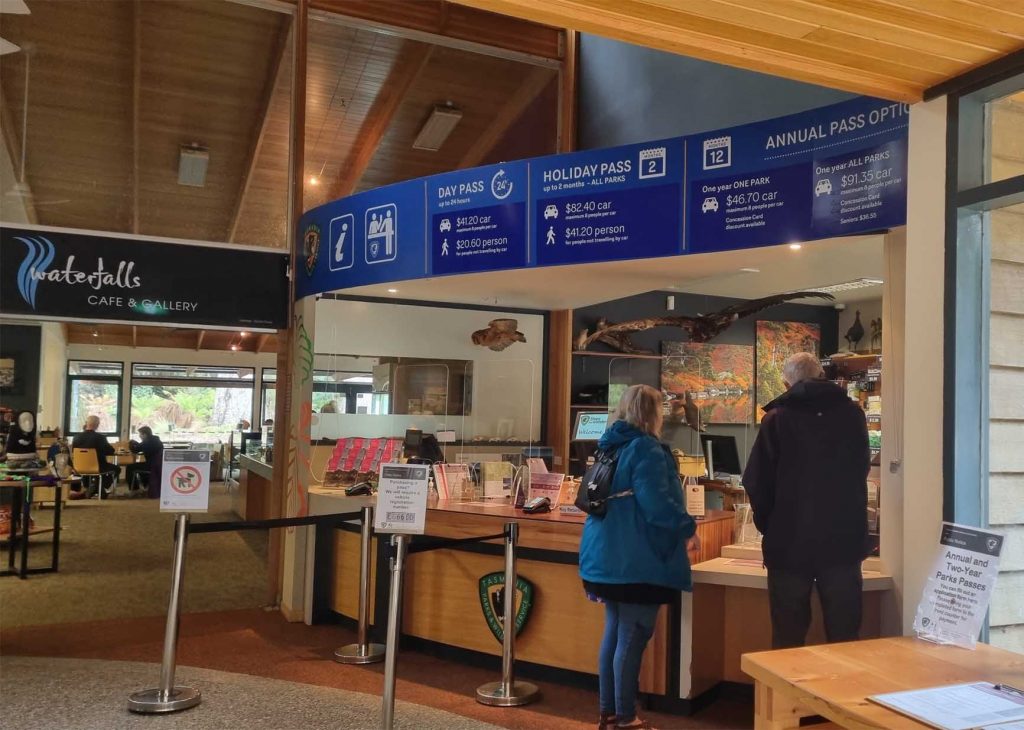 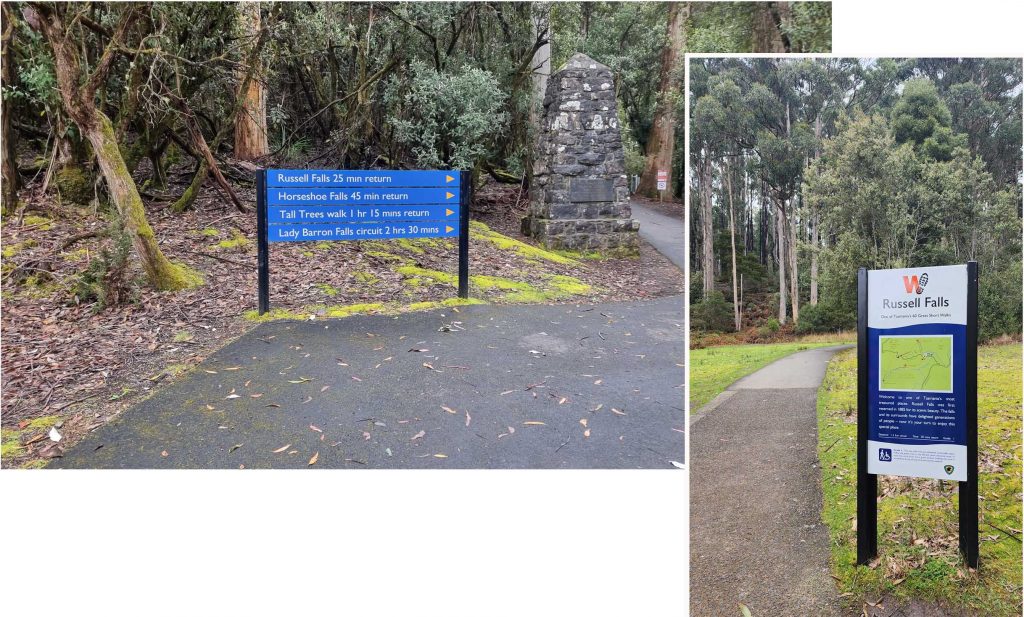 The path took us into a beautiful jungle. Fern palms lined both sides of the path giving it a good shade. It was cooling and we could feel a slight dampness in the air. Layers of green mold covered the fallen tree trunks on the ground which gave the impression that the forest was so “untouch”. 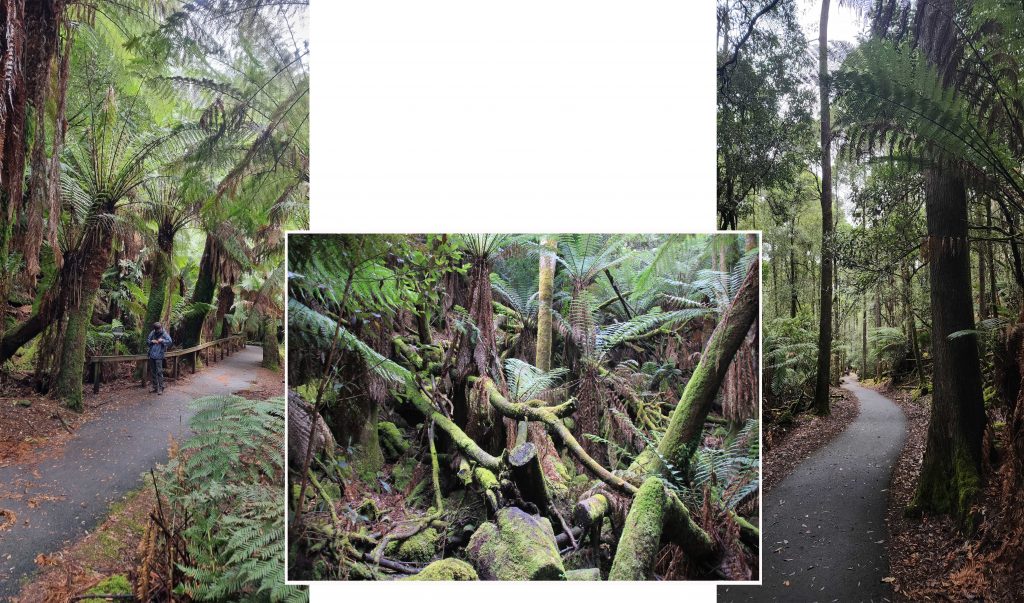 Walking to the Falls at Mount Field

After about 15 minutes of slow walking we reached the viewing deck of Russell Falls. It was a straight falls with many tiers. The falls was full of water which was probably due to the rainy season at the moment. 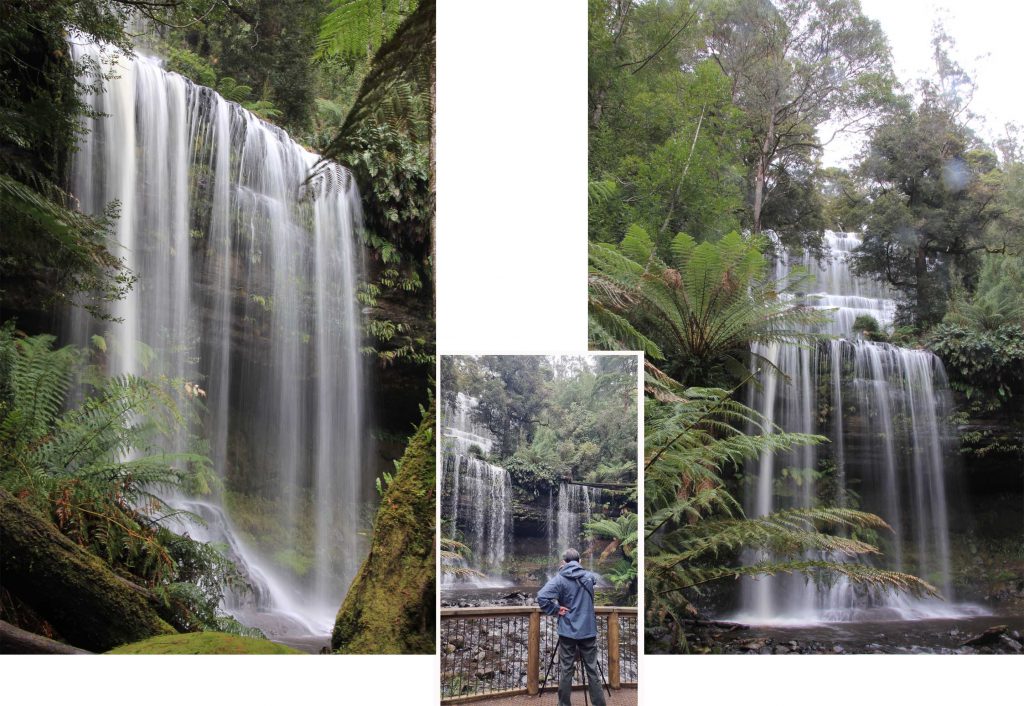 From Russell Falls we continued our walk in the direction of Horseshoe Falls. The path was no longer flat but went uphill. It took another 15 minutes before we reached the second falls. 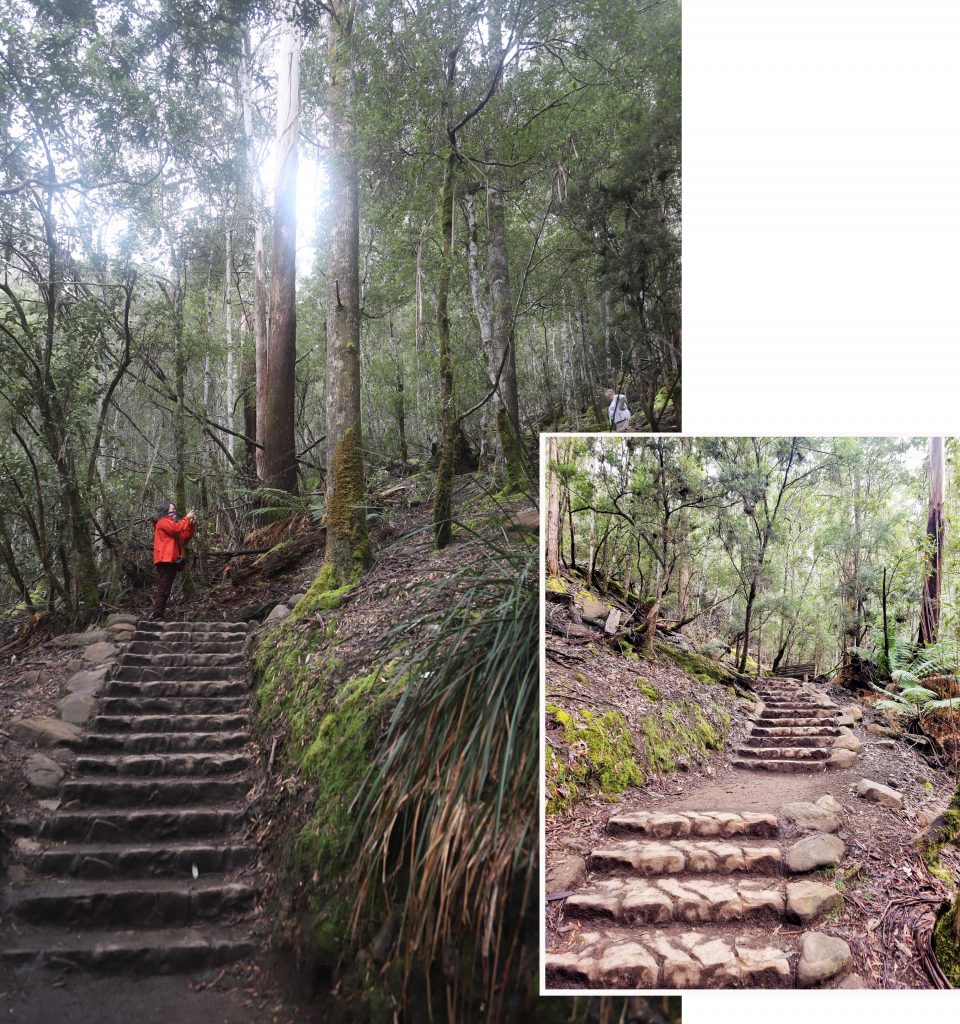 Steps up to HorseShoe Falls

Horseshoe Falls was not as impressive as Russells Falls. It was a half-circle falls not resembling a horseshoe at all. 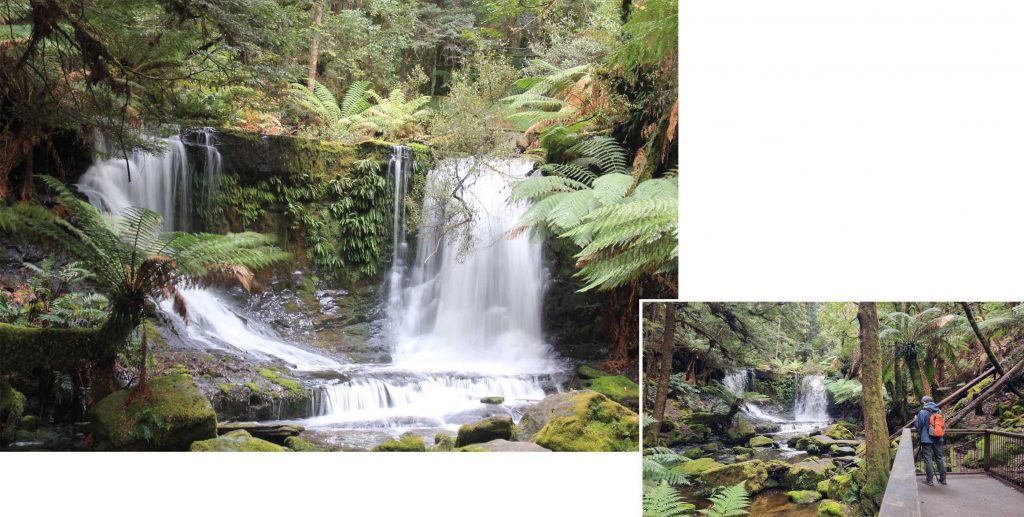 After the falls we drove uphill, taking a road Lake Dobson Road,  beside the visitor center to Fenton Lake. Lake Dobson the further lake was closed we were driving to Lake Fenton. It was a 25 minutes drive. Some distance to the Lake our GPS system lost its signal, luckily our phone google map still had its signal so we felt pretty safe.  Near the lake we saw a trekking path to “Seagers Lookup” which required a two hour return trek. At Seagers Lookup we would be able to view Fenton Lake from a high vintage point. Unfortunately the sky was gloomy and looked like it could rain anytime so we decided not to do the walk (uphill) to Seagers Lookup.

We walked down to the Fenton Lake. The place was empty and we were the only two people around! 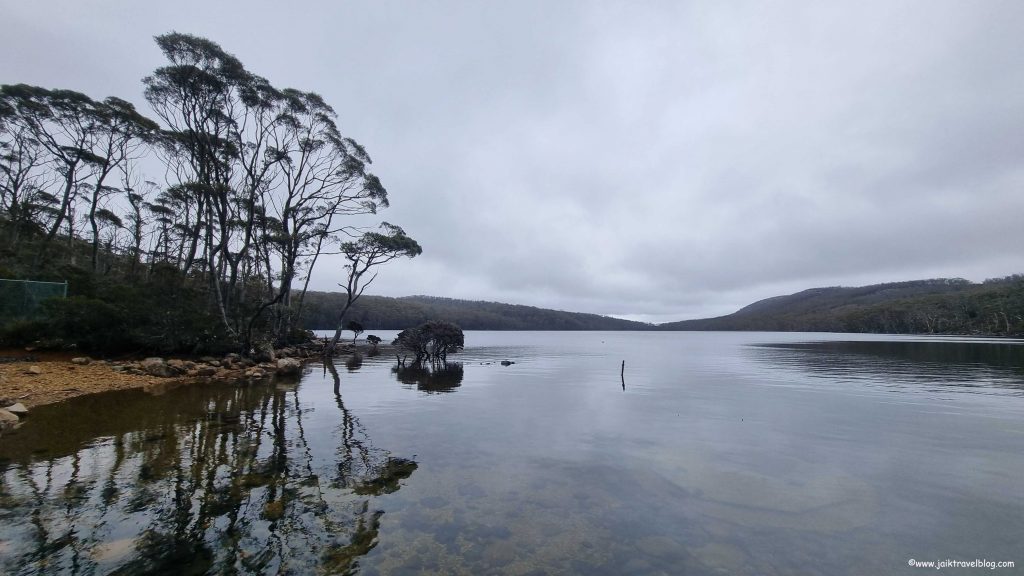 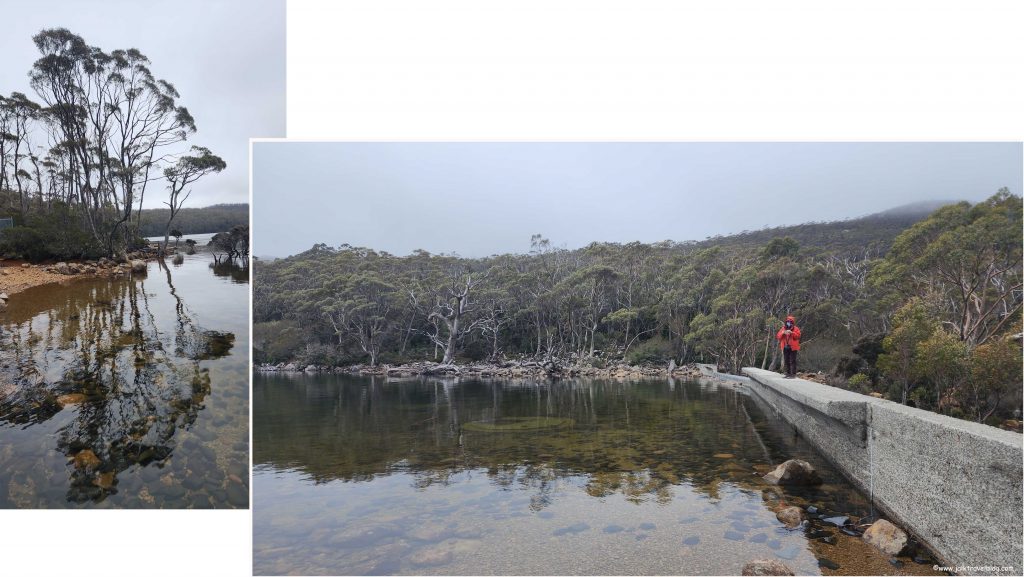 Our Stay for two nights

We had done our research on the many accommodations near Mount Field and finally settled on an Airbnb place at Maydena which cost about AUD$150 a nite. It was a whole house with three bedrooms! 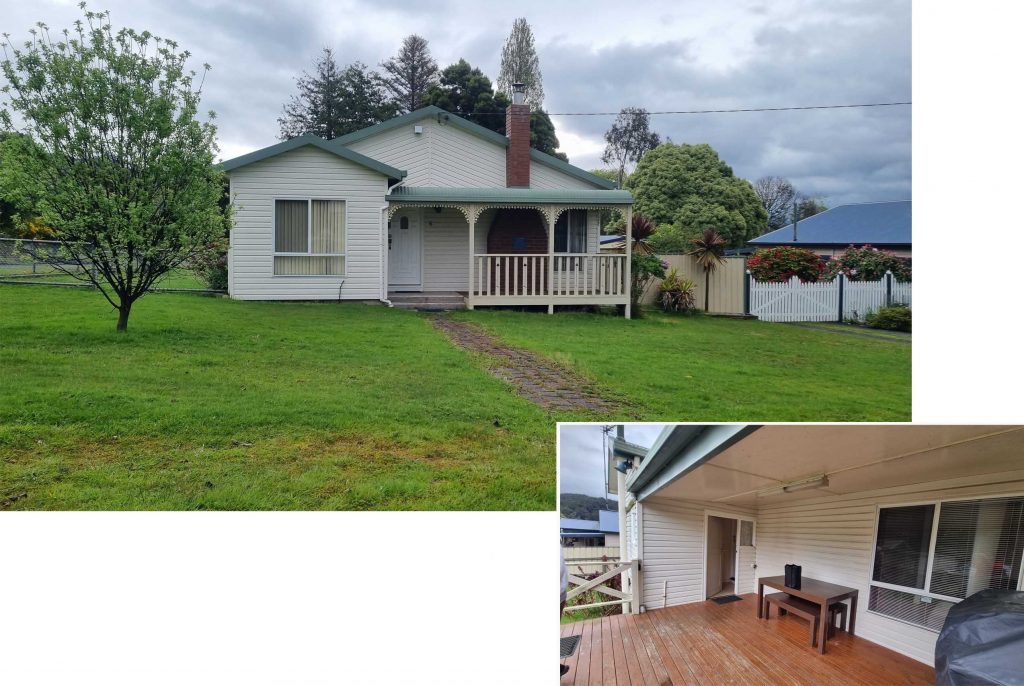 One bedroom had a queen beds, the second room had bunk beds and the third room had two single beds. This whole house can easily accommodate 6 persons! What a oversupply of bedrooms for only two persons! But its pricing was lesser than some of the smaller accommodation around the vicinity.

The living room was spacious and cosy and the kitchen was full equipped. 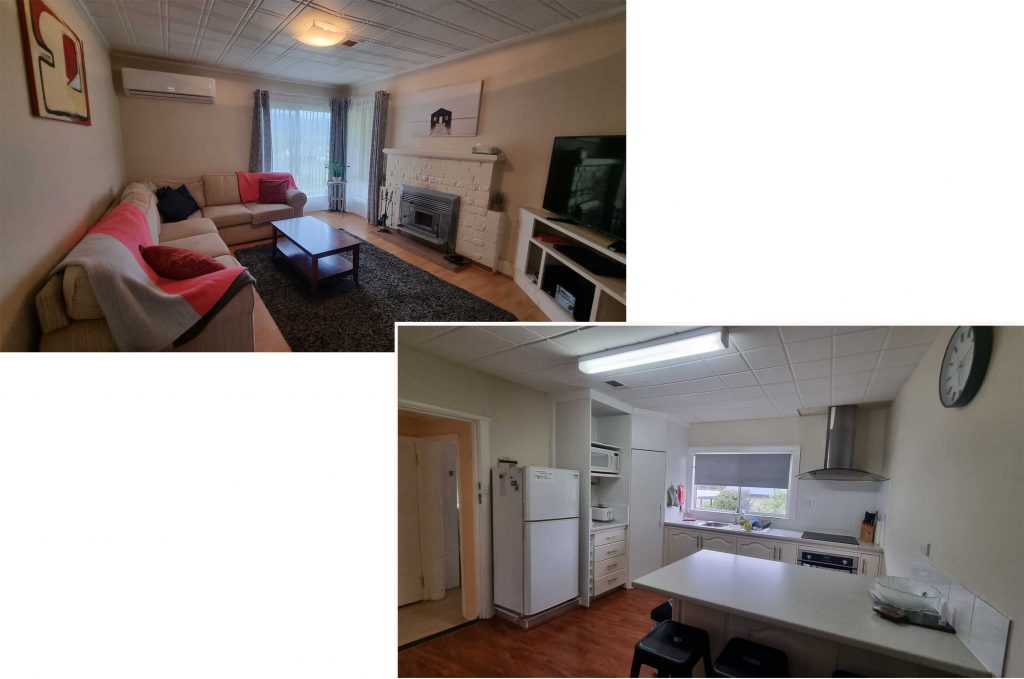 The house had a washer and a dryer which was just on time for us to do our first laundry in Tasmania. 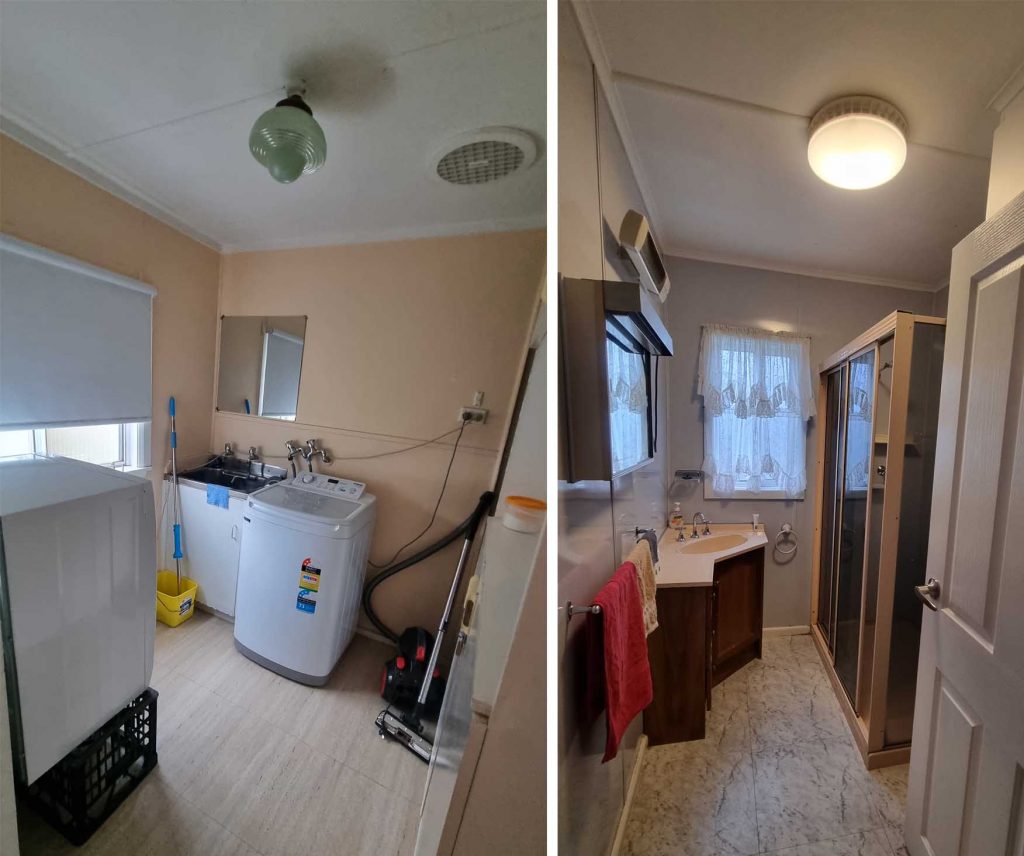 We made full use of the kitchen especially the oven to cook our meals. Cooking was a breeze, we just opened the pre-seasoned meats that we bought at Woolworths and put them in the oven, set the timing, and waited to eat. Yummy! Yummy!! and Yummy!!! 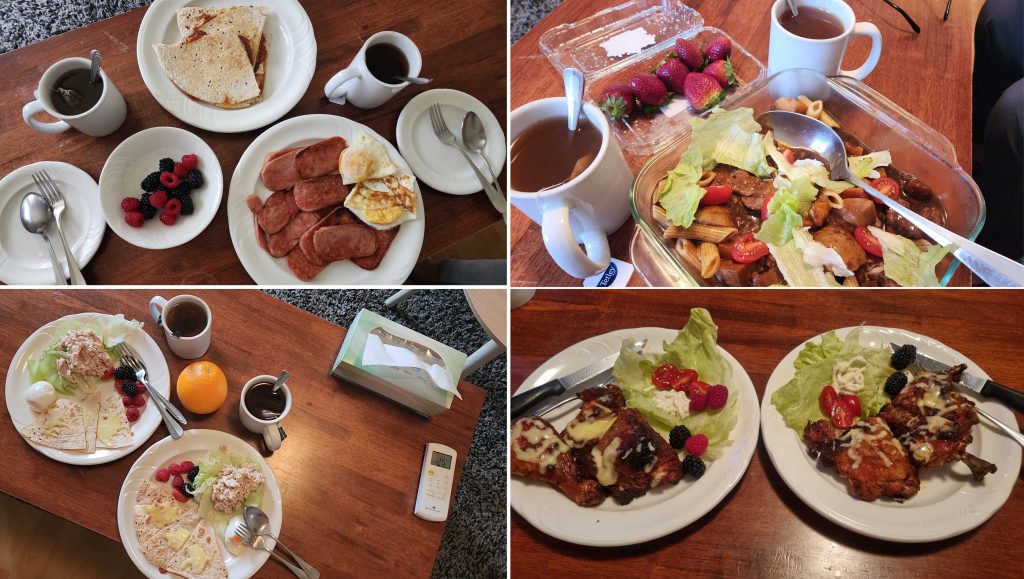 Our homecook meals at Airbnb Maydena