We planned to spend the morning exploring Nafplion. By about mid morning we would drive southwest to Mystra, one of the most exciting and dramatic historic sites of Peloponnese, an UNESCO site. We needed not leave Mystra until sundown when we would drive west to Kalamata for the night.

The total distance from Nafplion to Mystra to Kalamata was 180 km. 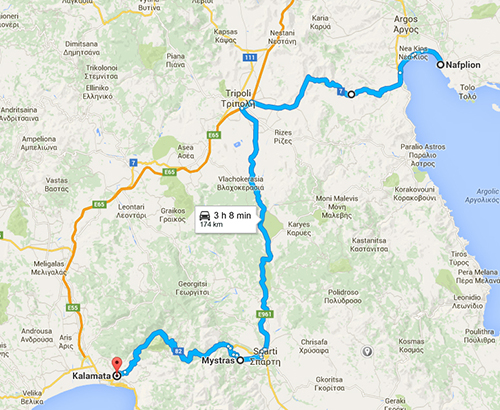 We achieved all our target destinations for the day.

Morning walk on the Promenade

We woke up early at about 7 am and went out to have a morning stroll on the waterfront promenade just outside our Hotel. The promenade was quiet, the carpark lots were free of car, the cafes and restaurants were still shut.

I was most glad to have booked a hotel at the “best” location (in my opinion) in Nafplion as the hotel was close to some of the great sights of the city. We loved to photograph scenery early in the early morning just when the sun rays appeared, staying at a hotel near the sights helped us to save a great deal of time as we did not have to wake up earlier to get to the site. 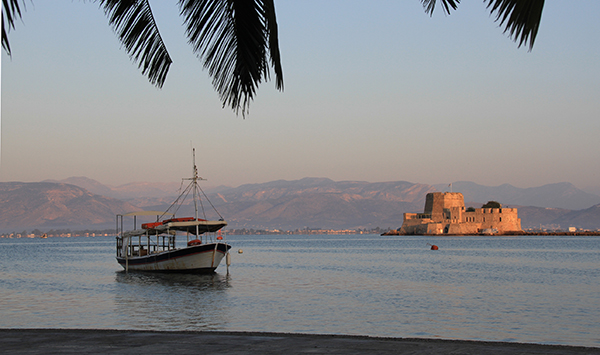 I intentionally left out the breakfast option when booking our room with Hotel Agamemnon because I knew that there would be many cafes along the waterfront promenade and I wanted to have a more exciting breakfast than those boring ones from the hotel. 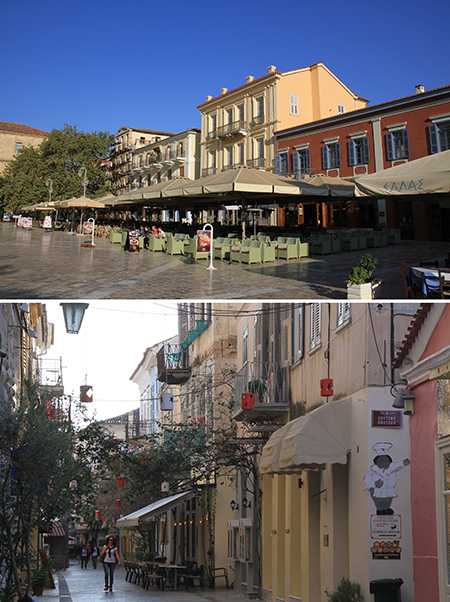 Nafplion Old town in the morning

We walked about two units to the right of our hotel and sat at the outdoor cafe of Rendezvous Restaurant and had our breakfast. Rendezvous was one of the restaurants that started business early.

After breakfast we strolled around the old town square (syntagma square) and a few other alleys. In the day time the old town still looked as picturesque as it did at night time. At night the warm light of the street lamps casted a uniform golden glow on all the buildings. In the day, the sunlight brought out the soft and strong colors of the buildings giving the area a different look.

An elevator going up to Akronafplia Fortress

The day before we had parked our car up the hill a bit of a distance from our hotel. Today with the help of my google map we took shortcuts, walking through alleys and going up steps to the carpark. This walk through the alleys was different because instead of walking past the usual shops, cafes and restaurants we were walking past living quarters. The alleys were clean and quiet, the doors of all the houses we passed were shut, we did not meet a single person and I wondered where were all their occupants. Were the adults at work and the children in school?

It seemed like the locals loved to paint the doors and windows of their houses in bright color and I could not resist taking a photo with one which was painted in bright red shade so similar to that of my fleece jacket. 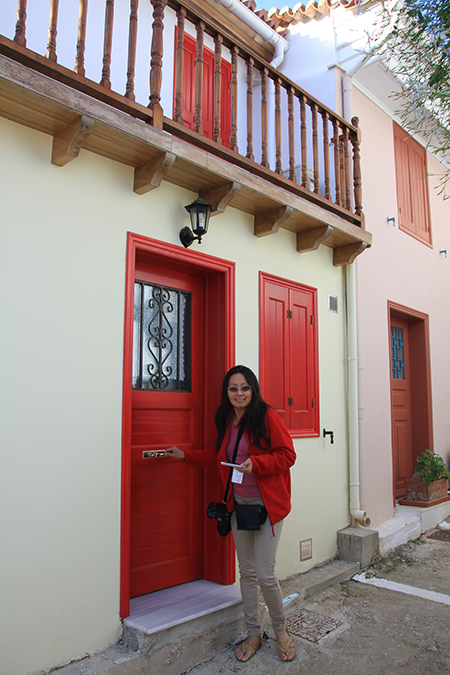 When we were at the carpark, we saw an interesting structure that seemed like a tunnel built into the hill. Since there was no “No Entry” sign in sight do we walked into the tunnel to explore.

Location of the tunnel to the lift going up Akronafplia Fortress

It was a well lighted and very wide tunnel that had very interesting and complex decoration on its ceiling. It looked like some sort of a bunker. The tunnel was very long, so I guessed we were walking deeply into the hill above us.

At the end of the long tunnel we saw three lifts. There was a couple ahead and they were dressed just like us and not in army fatigues or formal office wears. This gave us the assurance that we were not intruding into a restricted area. 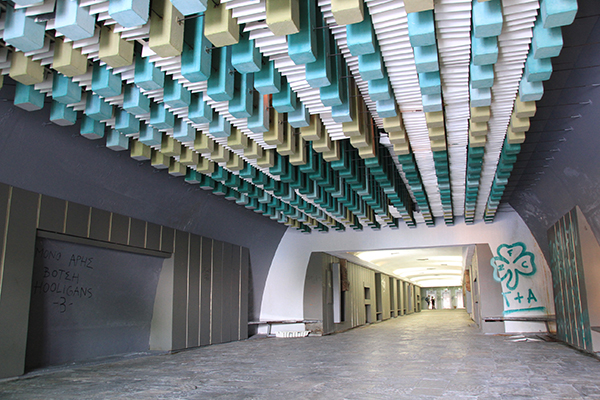 Tunnel to a lift

Since we were up at the Akronafplia Fortress we could not resist taking a few more photo shoots of the “floating” Bourtzi Castle in the water. 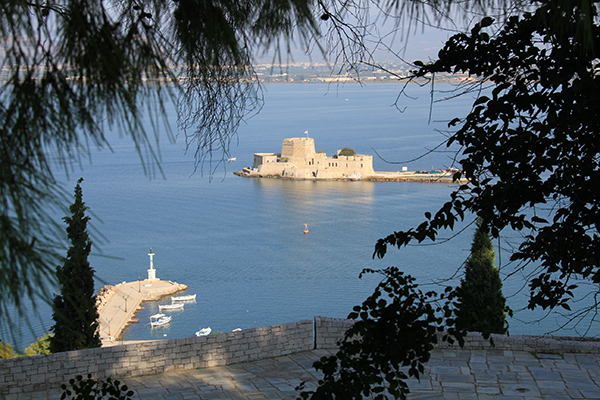 We drove about 150 km to Mystra and our journey took about 1 hour 45 minutes. Near the end of our journey we passed the town Sparti which was the modern day Sparta. We drove through the town without stopping anywhere as it was just an ordinary town with modern buildings and nothing captured our attention. 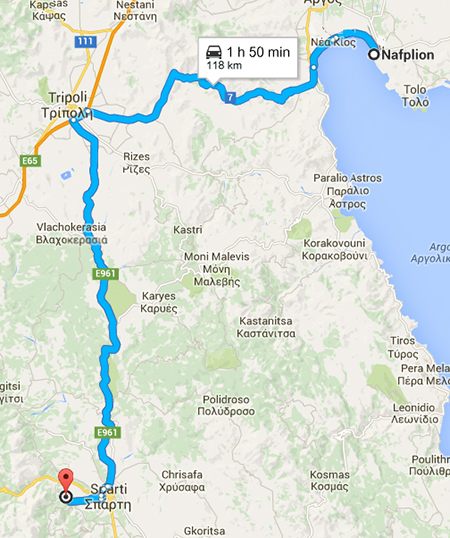 From Sparti town to Mystra town we drove passed a stretch of narrow, poorly maintained road with farms on both sides. These were not open farms with wide fields but farms with short trees messily planted on the land.

For a while we thought we were on a wrong road because it felt as if we were crossing someone’s backyard. We persisted on, trusting our car GPS and after a while we were back on to a proper road again. 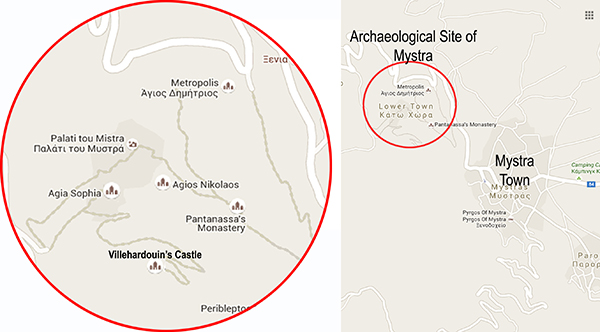 We reached Mystra town a quaint looking town but the town was not our destination we still needed to drive further uphill to the ancient Mystra site just a short distance away.

The archaeological site of Mystras was a relict townscape from the 13th century. It occupied a steep foothill on the northern slope of Mt Taygetos. Ancient Mystra started as a castle but the inhabitants of nearby Sparta fled to this safe place and developed it into a city. 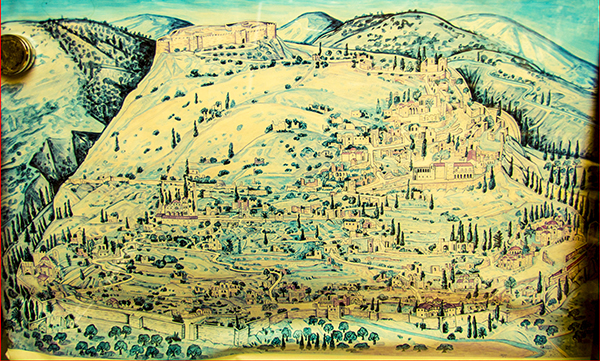 Ancient Mystra was a fortified city, it was layered into Lower City, Middle City and Upper city on the slope of the hill. Fortified walls were built at each layer.

We had allocated ourselves 5 hours to explore this amazing archaeological site. The site was huge with many byzantine ruins all over the slope of the hill. To explore every ruins would need more than 5 hours so we planned to explore the must-visit fortress, palace, churches, monasteries and metropolis complexes.

We drove around until we came to a carpark where we saw a ticketing booth and got out to buy our entrance tickets. Apparently there were two entrances to the same archaeological site, one near the Upper City and the other nearer to the Lower City. The ticketing staff advised us to explore the Upper City first then drive down to the other entrance where we could use the same ticket to enter and explore the Lower City.

At the Upper City our first target was the castle. The Villehardouin’s castle was at the top most part of the Upper City and it was a long windy walk up the hill on hard uneven stone path.

The castle was built by William II of Villehardouin, a Achaea Prince. Unfortunately before the castle was completed, Mystra was handed over to the Byzantine Emperor, Michael VIII Palaeologus after the Archaea Prince was defeated at the battle of Pelogonia in 1259.

The castle looked very huge and its stone walls were very tall and massive. It looked impenetrable. We entered the castle compound and like most ruins only the strongest building elements remained which in this case were the stone walls. 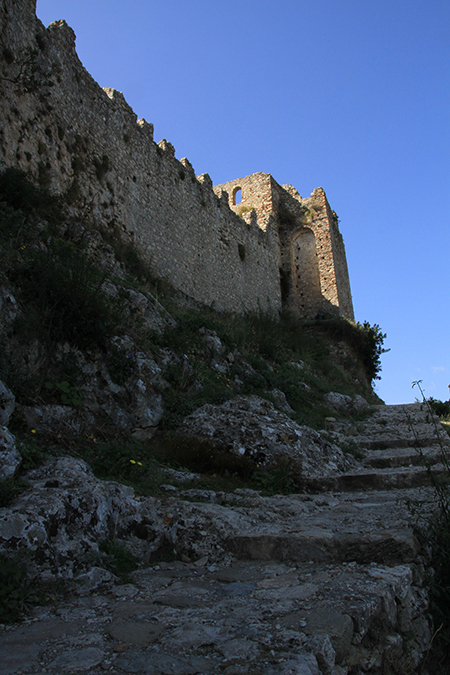 I picked my way carefully as I stepped over uneven stones along the castle wall walk going round the perimeter. Standing at the south-east end of the wall walk I saw a view that was absolutely mesmerising. The vastness of the land before me and the dramatic steep drop from the top of the wall to the ruins of the lower city below was a breathtaking scenery. 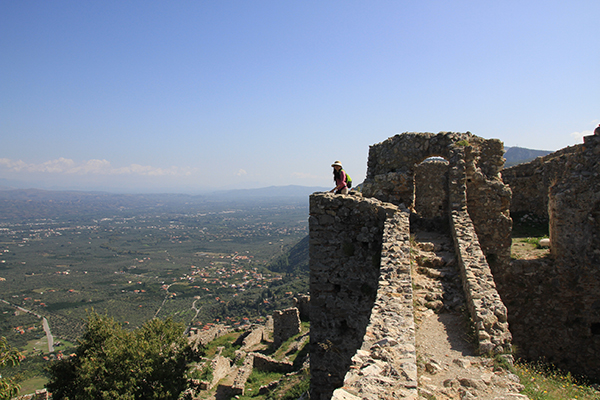 Agia Sophia was located in the upper city near to the entrance of the archaeological site. Externally the ruin structures looked quite intact. Besides its wall, its roof was still standing. I found the Byzantine architecture very lovely, from the tiled dome roofs to the brick walls to the arched windows. I particularly liked its sandy color and the different shades of orangey tone of its structures. 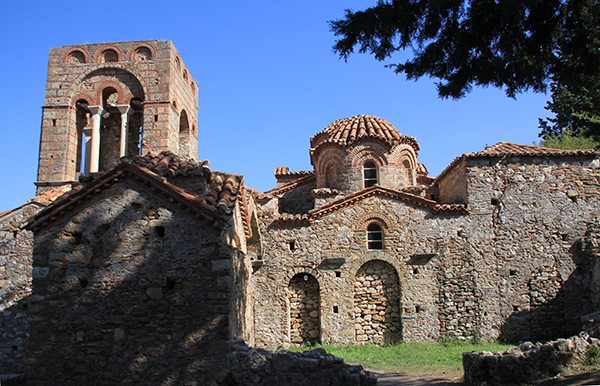 When we walked into the church we were pleasantly surprise to see frescoes on the underside of the high dome. 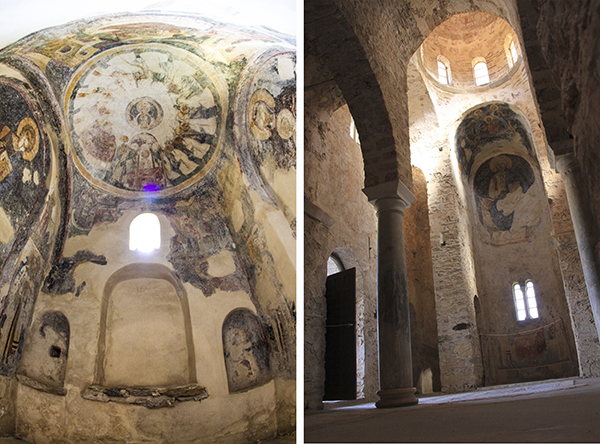 More frescoes were seen when we walked into the two chapels, one of which was entered from within the church and the other through a door outside the church. The frescoes depicted Biblical scenes and images of Christ, the Virgin Mary and other saints.

Agia Sophia was built by the first Despot, Manuel Kantakouzenos Palaiologos circa 1350. It was intended to serve as the palace church but in 1365 it was turned into the katholikon of a monastery by Patriarchal decree.

The palaces of the despots of Mystra was a complex of buildings built at different times. On the path down from the castle we could see the roof of the palaces. The palaces were undergoing restoration we could see layers of scaffolds on the perimeter of the L shape complex and heavy machinery sitting on the palaces ground. The area looked out of bound so we only viewed the palaces from the top. 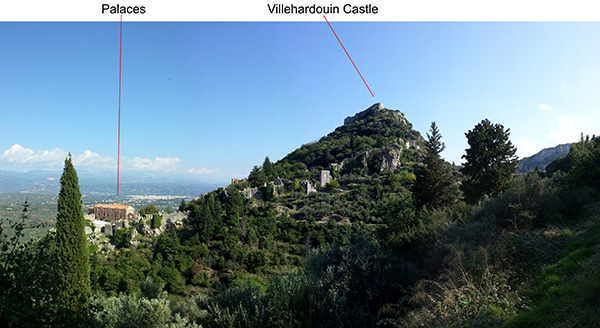 Palaces below the castle

We drove to the entrance nearer to the Lower City and using the same tickets that we had brought at the earlier entrance we entered the archaeological site again. After passing the entrance and walking a short distance we could see Pantanassa Monastery on the upper slope. 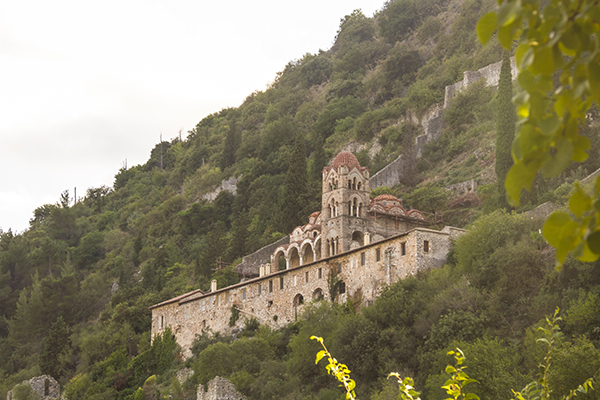 Monastery look very majestic with its long wall and its five domed tower. It was built in 1428 and was the only monastery that still had nuns dwelling within its walls.

At the Lower City there was also a huge church called Metropolis. It was the oldest church in ancient Mystra and was dedicated to Agio Demetrios. The Metropolis was built in 1264 by its first bishop Evgenios to be the Metropolitan Church of the brand new city. 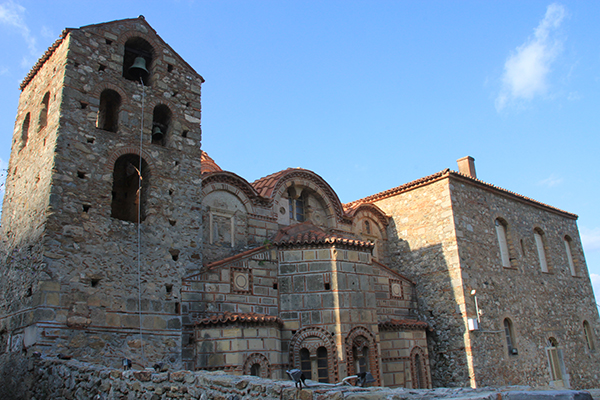 As we stepped through the white arch gate of the church we walked into a sunken courtyard. The sunken courtyard was large as this was a metropolitan church which needed to hold the masses of the community. 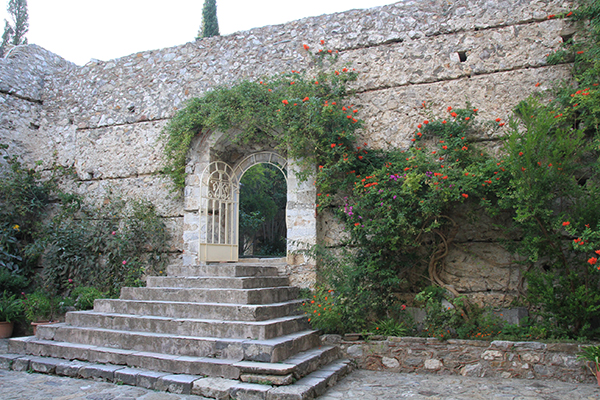 Entrance to the Church Compound

Kalamata city for the night 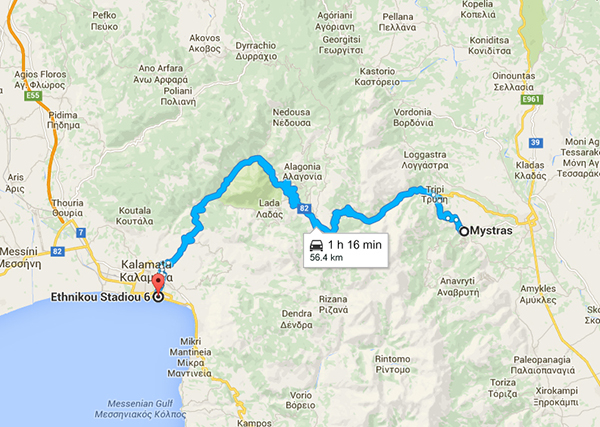 Route from Mystra to Kalamata

Kalamata was the nearest city to the west of Mystra and would be a good place to stop for the night. The distance was about 57km and it took us about 1 hour and 15 minutes to reach the city. Kalamata was along the coast of Messenian Gulf.

Just when we were about to reach Kalamata I used my handphone to surf for a hotel that was offering rooms at reasonable rate. I found Hotel Messinian Bay a hotel that faced the sea, with good reviews and reasonable rate for a double room at €55 inclusive of breakfast.

We drove straight to the hotel and from the exterior of the hotel we were not disappointed. It looked good and new. We walked in and booked two rooms at the hotel. The room was a good size, with ensuite bathroom.

We dumped our luggage in our rooms and left the hotel in search for a place for dinner. Near to our hotel we did not find any restaurant so we drove along the coast for about 3 km before we came to another section of the coast which looked busier. There were many hotels and restaurants along the stretch. We stopped at a place called Morales Pizza for dinner. 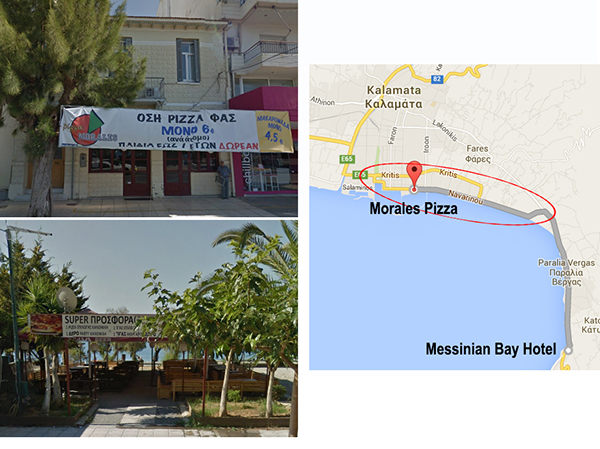 We did not sit indoor at the restaurant but crossed the road to sit at the its outdoor dining area on the beach. The place was very quiet as the tourist season was over and we four were the only customers. The pizza was cheaply priced and value for money.