We planned to visit two destinations, the first was archaeological site of Olympia and the second was Zakynthos island.

For the last part of journey we would need to drive our car onto a car ferry at Kyllini Port and sail to Zakynthos Island. I had got the go ahead from Budget Car Rental to drive the rented car onto a ferry. This agreement was very crucial or if there was any mishap on the ferry there would be no insurance coverage for the car. 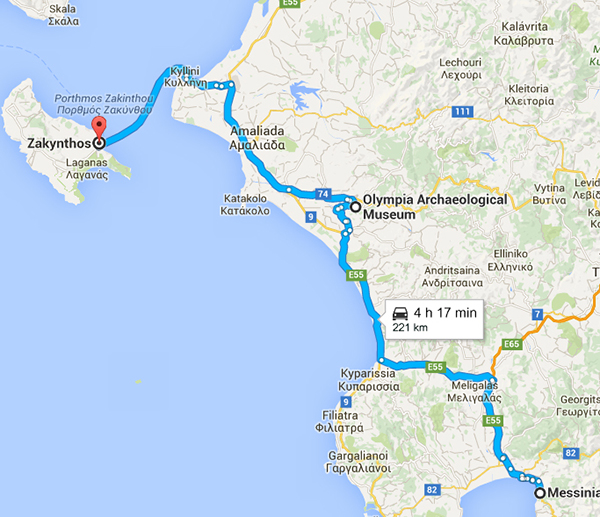 Our room in Hotel Messinian Bay faced the sea and the view in the morning was very serene and refreshing. I sat at my balcony for a long time admiring the view and was reluctant to leave for my breakfast. 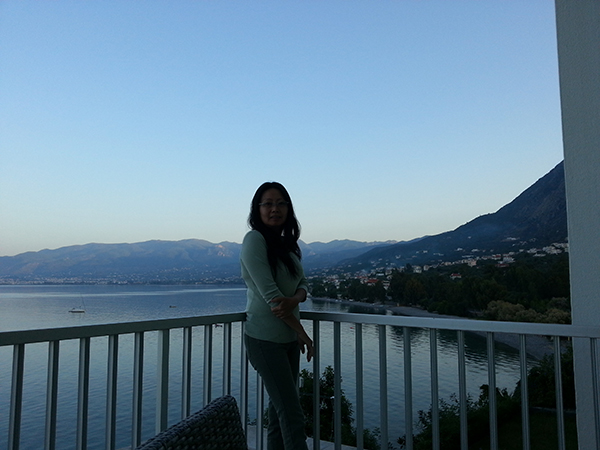 Unlike yesterday, today was a more relaxing day as we only had two destinations to visit. We left our hotel at around 10.30am and drove for about 2 hours travelling 120km to reach the Olympia town. The town was just before the archaeological site. The town was nice and modern with plentiful of hotels, shops and restaurants.

There was a lovely taverna called Ambrosia just beside the car park near the archaeological site. The taverna was very prettily decorated with many pots of colourful flowers, it looked very inviting and it served authentic Greek food. Since it was already 1pm we decided to eat our lunch before walking the Olympia site. Well the food at Ambrosia was as nice as the place looked. 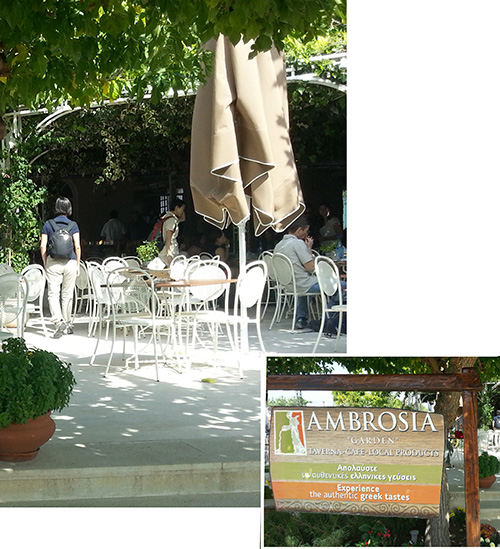 From the car park we had to walk about 10 to 15 minutes before we entered the ground of Olympia and before we could see the ruins. 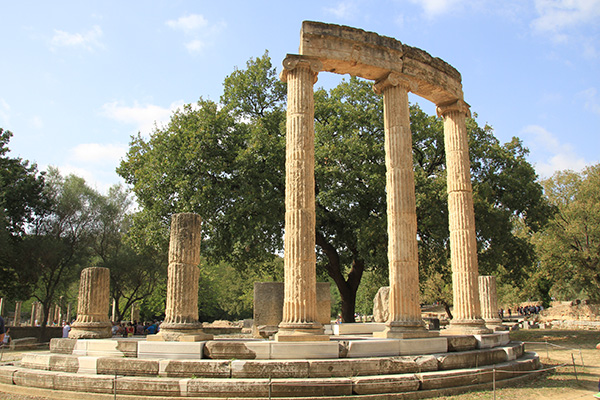 We were not expecting much from the site as based on my online research the site was very much a pile of rocks. We were visiting it because of its international significant. We headed straight to a familiar structure, it was the site where the Olympic torch was lighted a few months before the start of every Olympic Games. Finally I learnt the name of the structure, it was called Philippeion. This once elegant circular building was dedicated by Philip II, king of Macedon, a chariot racing Olympic Champion himself. The monument was completed by his son, Alexander the Great, after his assassination, in 336 BC. 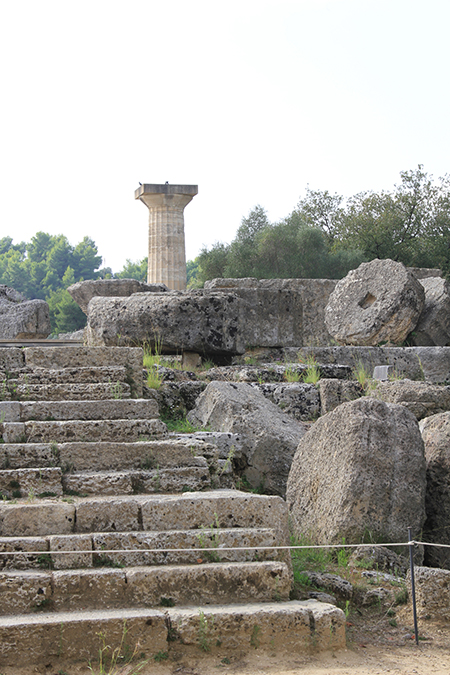 The remains of Zeus Temple

Olympia was the site of the ancient Olympic Games. It functioned as a meeting place for worship and other religious and political practices as early as the 10th century BC. The Olympic Games were closely linked to the religious festivals of the cult of Zeus, but were not an integral part of a rite. The Olympic Games started back in 776 BC, they continued for nearly 12 centuries until Emperor Theodosius decreed in 393 AD that all such “pagan cults” be banned.

It was a great pity that Olympia was in such a poor state today. Most of the columns had fallen onto the ground into many pieces. The whole site looked like a huge 3-D jigsaw board with so many stone puzzle pieces all over the place. How I wished somebody could piece them together again! Wishful thought that would not happen in my lifetime.

All that was remained of the stadium was this arch entrance, The Krypte. 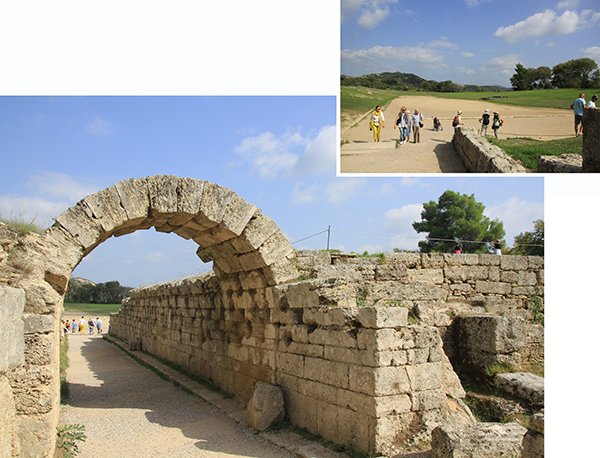 The largest building (ruin) at the the site was the Leonidaion, it was a sort of a luxury hostel that housed important athletes and guests taking part in the Olympic Games at Olympia. 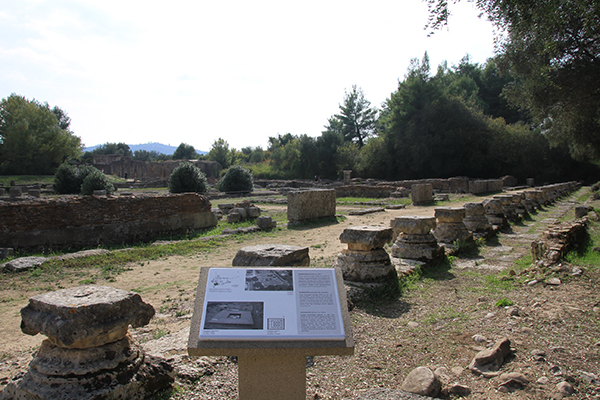 Leonidaion was constructed around 330 BC and was funded and designed by Leonidas of Naxos (a benefactor and an architect). The original building had a square central open court surrounded by 44 Doric peristyle columns. On each side of the square court were rooms. Outside the rooms ran continuous rows of Ioanian decorated columns, 138 in total.

At the site all we saw were rows of pedestals and not row of Ioanian or Doric style columns.

On the surface the archaeological site of Olympia were just piles of rocks. Though there was not much to see, I did not regret visiting it. When I walked among the ruins and read the information tablets detailing the significant of a building, it usages, its history and its graphic mock up, I was able to picture the structure in my mind and the grandiose of this place back in history.

We drove for about an hour from Olympia archaeological site to Kyllini port which was 65 km away. This was a port on the Ionian coast on the mainland side and was served by a number of ferry routes to several Ionian islands. We reached the port at about 5pm and bought ferry tickets for four adults (€7.60 per adult) and one car(€37.90) to Zakynthos.

The ferry was very huge, with two lower decks for cars and two upper decks for passengers. The passenger decks were comfortable with sofa chairs and tables and cafeterias. The ferry trip to Zakynthos took about 60 minutes.

We were at Zakynthos to visit its world famous “Shipwretch cove”, and my impression of the island was one with long stretches of beautiful beaches. I thought the port town would be a quiet place and did not expect to see a densely built up port town when we arrived at Zakynthos Island. 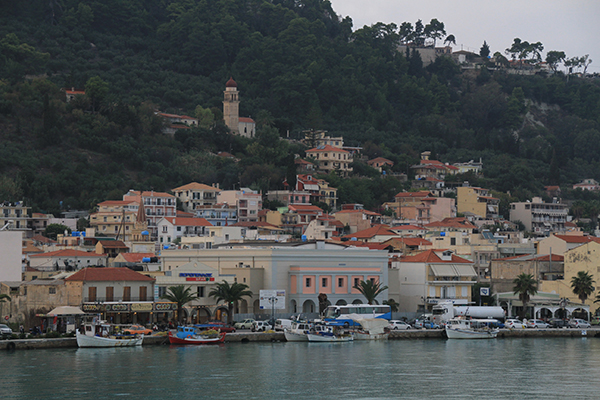 The convenient of having a car was once the ferry berthed we got into it, drove out of the ferry, out of the port and into the town. No time wasted at all.

When I was in the ferry, I used my handphone to carry out some online searches for hotels with reasonable room rates, good reviews and preferably at the port front of Zakynthos . I found Dali Hotel which seemed to the best among them. After the ferry berthed we only needed to drive 1 km to Dali Hotel.

We left our luggage after booking two rooms and drove uphill on the route that the hotel owner had drawn for us on a map. There was a cafe beside a church up the Bochali hill that had a “fantastic” night view of the harbour, that was what he said.

Unfortunately we were unable to find the cafe. The sun had set, the roads up the hill were not well lighted, the driving instruction marked on the paper map was not clear and after making several wrong turns into dead ends and driving onto road that was too narrow and steep to be even called a road, we gave up and returned to port. How I wished I had insisted on marking the location of the cafe on my google map!

After dinner we drove to the jetty to take some night shots of the port front. Absolutely stunning. 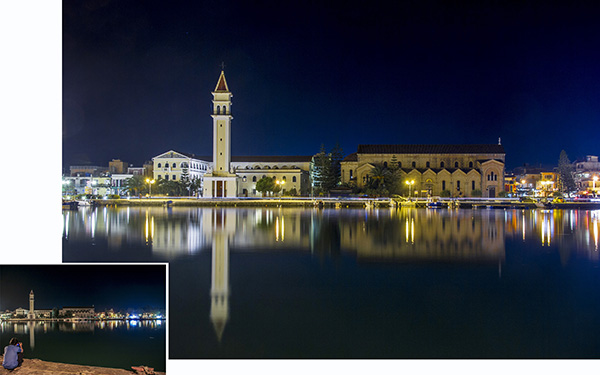 Though we did not manage to find the cafe that was beside a church up in Bochali Hill earlier in the evening when we drove up the hill, we somehow manage to find it through our camera lens when standing at the Jetty. It was the most colourfully lighted place on the hill above the port town. We could see the red sun umbrellas of the outdoor cafe. 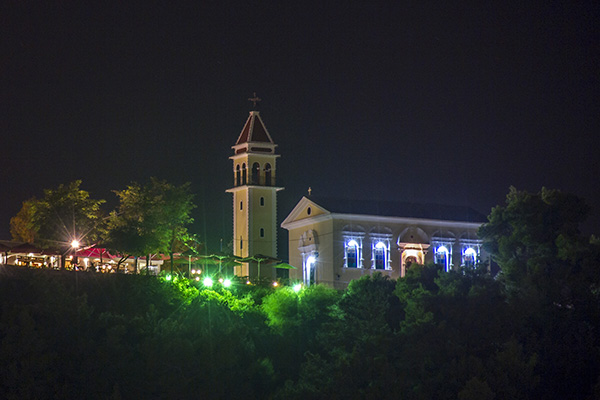 Cafe beside Church on Bochali Hill

Our Accomodation for the Night – Dali Hotel

Dali was a four storey building. Its owner was a very friendly man. We paid €50 for each of the two rooms that we took. The rooms came with free breakfast. The owner was kind enough to offer my husband and I the honeymoon room without extra charge. 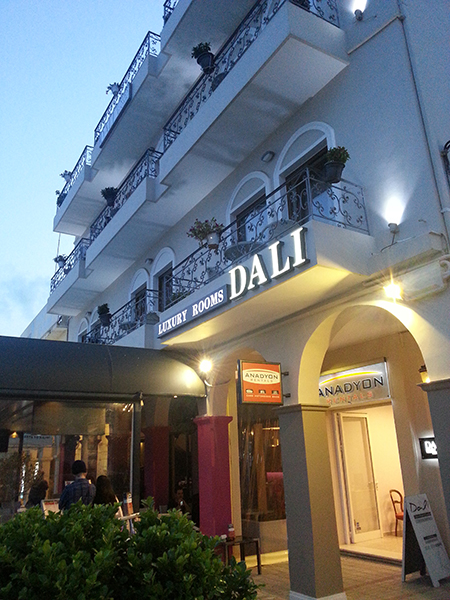 The rooms in Dali Hotel were very luxurious well worth the money we paid. The only shortcoming was that there was no lift from the first to the second level, luckily the owner was very kind to help us bring up the luggage.

Our honeymoon room was on the roof level which was divided into two sectors. One sector faced the front and was the living quarter of the owner and his family. Our room and balcony was in the other sector that faced inland. The balcony was huge and it offered a wonderful view of the town. At night we could see the lighted rooftops of the houses inland and several church towers that were built mid level on the hill. 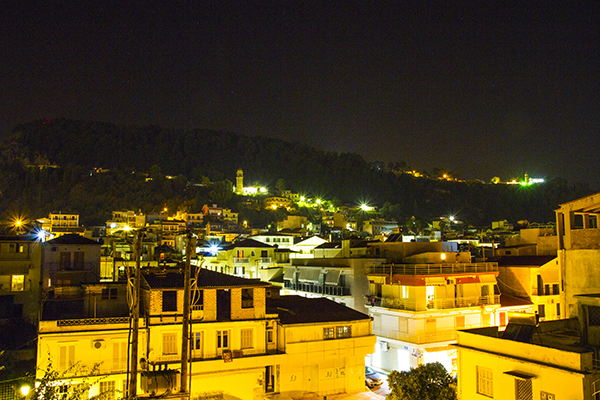 Night scene from the balcony of our room