Our plan was to visit another Festival and this time we would be visiting the Sawara Matsuri.

The sightseeing at Sawara Area would include

We achieved all three targets!!! 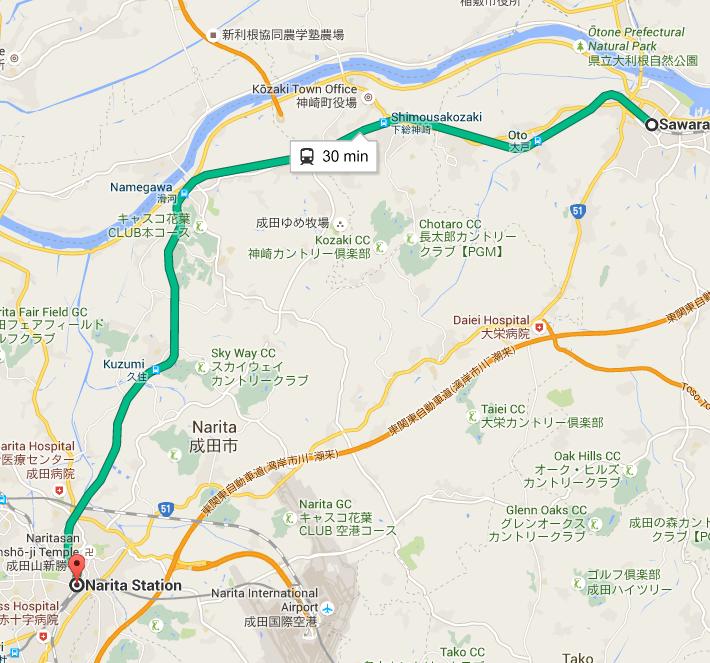 Sawara is a small town in Katori City and it lies northeast of Narita City about 28 km away. This town was a transport hub for rice shipments into the capital during the Edo Period. In the present day, Sawara is famous for its “Litter Edo” a small district of preserved and restored traditional residences, merchant shops and warehouses along a canal.

At about 8.30am we set off from our hotel and took a short walk to Narita Station, along the way we were looking out for a suitable store that served breakfast. We were surprised and delighted to come upon all 10 festival floats parked at the east entrance square of Narita Station. 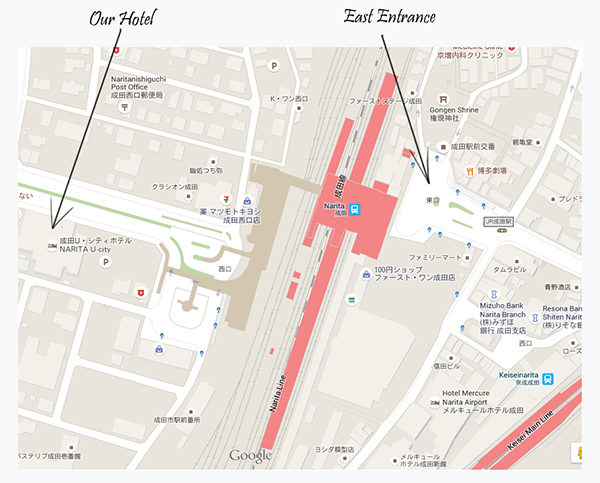 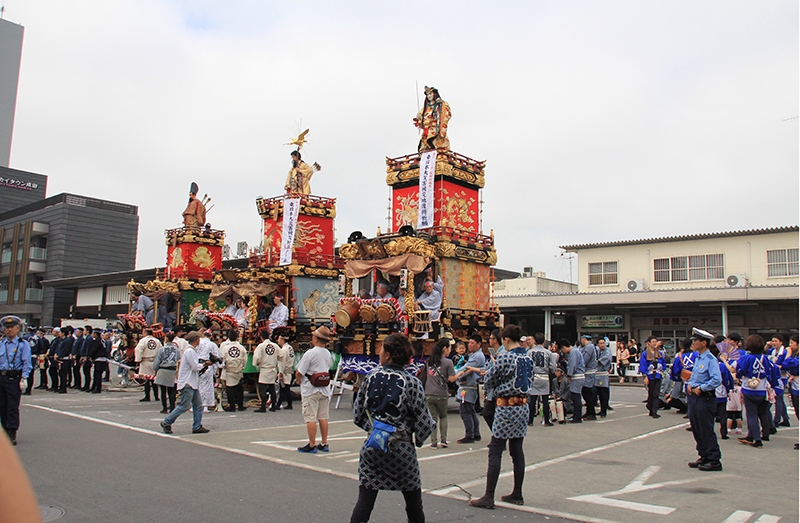 Festival Floats parked at the square

Each float got its turn to be the highlight of the ceremony when its musicians would play a traditional piece and its participants would swing to the tempo of the music as they balanced themselves on the rooftop of the float. The ceremony went on for about one and a half hour before one float after another departed from the square, pulled out by its participants.

It was not easy to get a good view as the crowd surrounding the square were many “human layers” thick. It seemed that the floats were parked there very early in the morning and the locals were already there too.

I met many Kimonos cladded pretty young girls and could not resist requesting for a group photo. It was amazing how this youngsters were so fully engaged in their traditional festivals. 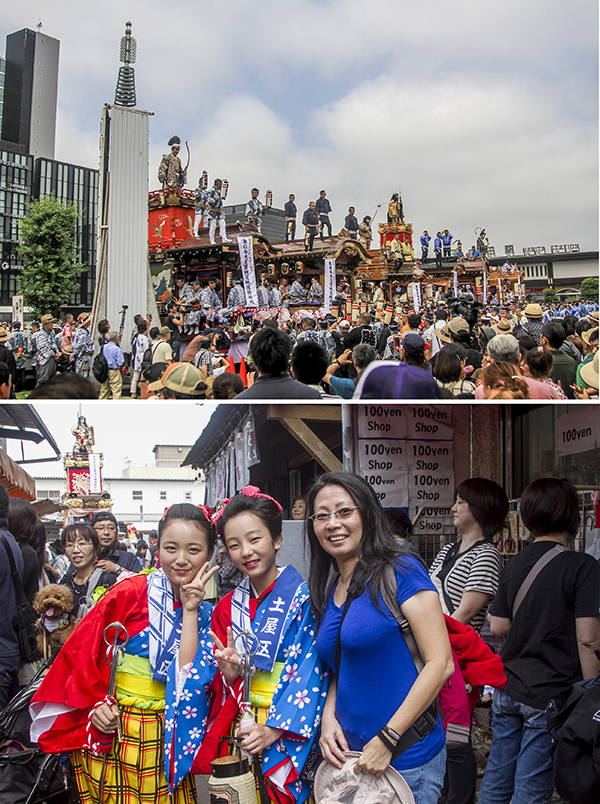 The young and pretty participants and I

The train ride from Narita Station to Sawara Station took about 35 minutes and cost ‎¥500 per person. The train arrived early and there was not many people on board. (I was always very amaze with the punctuality of the train in Japan, it could arrive early but it was never late.)

The first thing we saw when we stepped out of the train at Sawara station was a huge poster showing all the 10 floats that would be paraded at the Sawara Matsuri.

We knew that the festival would go on late to the night, so it would be better for us to visit other sites before moving on to the festival. Our first destination was Katori Jingu Shrine which was located just outside Sawara Town. The distance from the station to the shrine was about 4 km which was too far for us to go on foot.

Before I left Singapore, I was so happy to find out that there was a local bus that would take us from Sawara Station to Katori Jingu Shrine. We planned to purchase a 1-day ticket at ¥500 for each of us so that for the rest of the day we could hop on and off the bus as it looped around Sawara. Unfortunately the plan did not work out. When we reached the local bus stop located just outside Sawara train station at around 11.00am, we found that the next bus would not arrive till 1pm. The bus schedule that I had retrieved from the internet was very different from the one pasted at the bus stop. The 30 minutes interval between buses was also incorrect, the internal was like up to 2 hr at certain part of the day.

At 11.30am, the weather was already very bright and hot (hotter than in Singapore), so we had to abandon our plan to wait for the bus and hopped onto one of the several taxis that was waiting outside the train station. The one way taxis fare was ‎¥1630 which I felt was rather expensive for a 4km drive to Katori Jingu Shrine.

This shrine was the head shrine of the hundreds of shinto shrines in Katori. It was build in 1700 by the fifth Tokugawa Shogunate, Tsunayoshi Tokugawa. Since it was located just outside of Sawara area I thought it would be good to include this shrine in our visit to Sawara area. 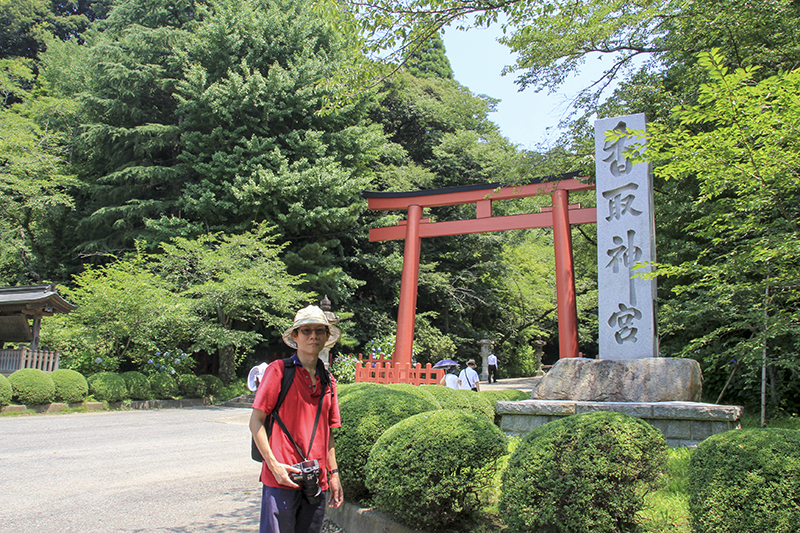 The day was very hot but the moment we walked past the red Torii gate of Katori Jingu Shrine we could immediately feel cool fresh air. The gravel path starting from the torii gate that lead to the internal of the temple was lined with maple trees and stone lanterns on both sides. Under the huge canopy of the trees, the walk was very peaceful and I felt as though I had left the town outside and moved into another world. 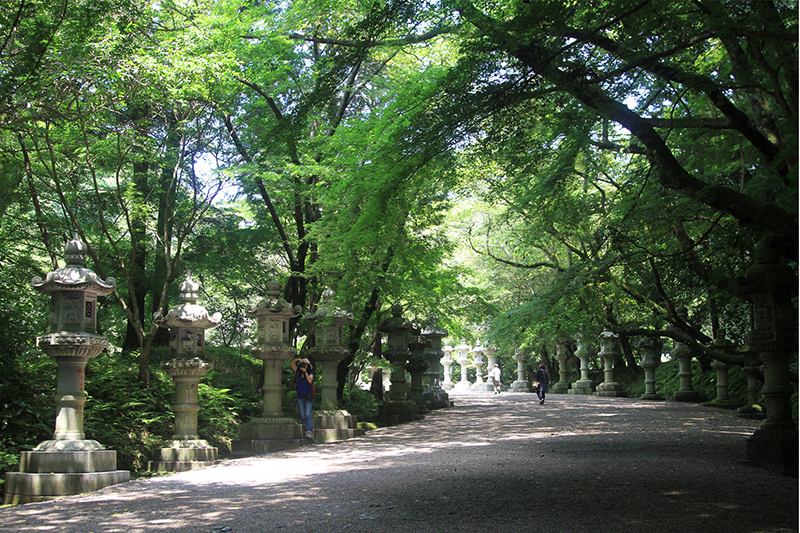 On our way to the prayer hall of the shrine we walked past another Torii gate, a grey one (unpainted) this time. Japanese Shinto shrines are characterised by having one or more torii gates at its entrances to its the ground of the shrine. Passing through the torii gate signifies stepping from the mortal world into the scared spaces of the deities.

After the torii gates, we stepped through two elaborated building-like red gates. The first and outer one was one storey high and the second was two storey high. The two storied red gate was also called the Romon (楼門) or tower gate. 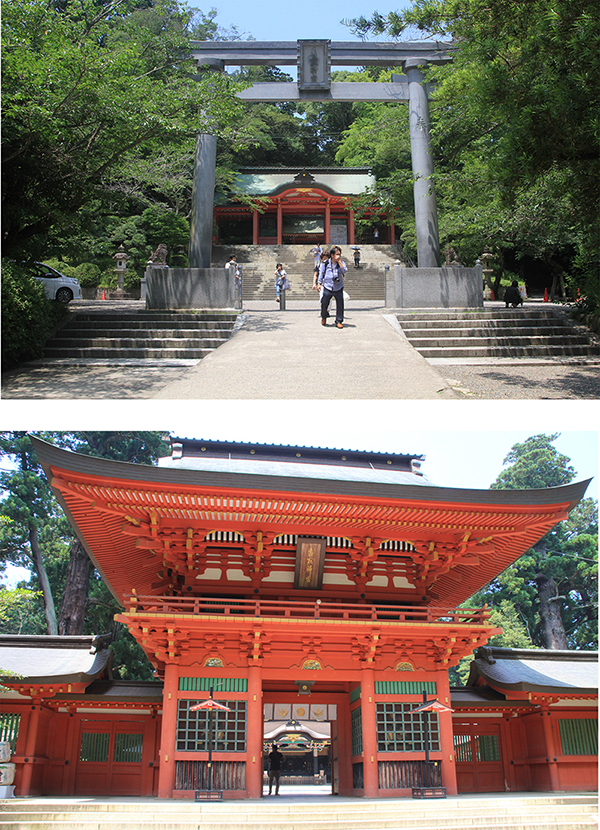 Finally we reached the prayer hall, haiden, (hall of worship). It was a beautiful brown and gold structure. We thought of exploring the interior of the haiden but did not go in because there was a ceremony being conducted by a monk in the prayer hall. A Japanese “monk” in tall black hat and green rope was performing some religious ritual for a few people kneeling on the wooden floor. 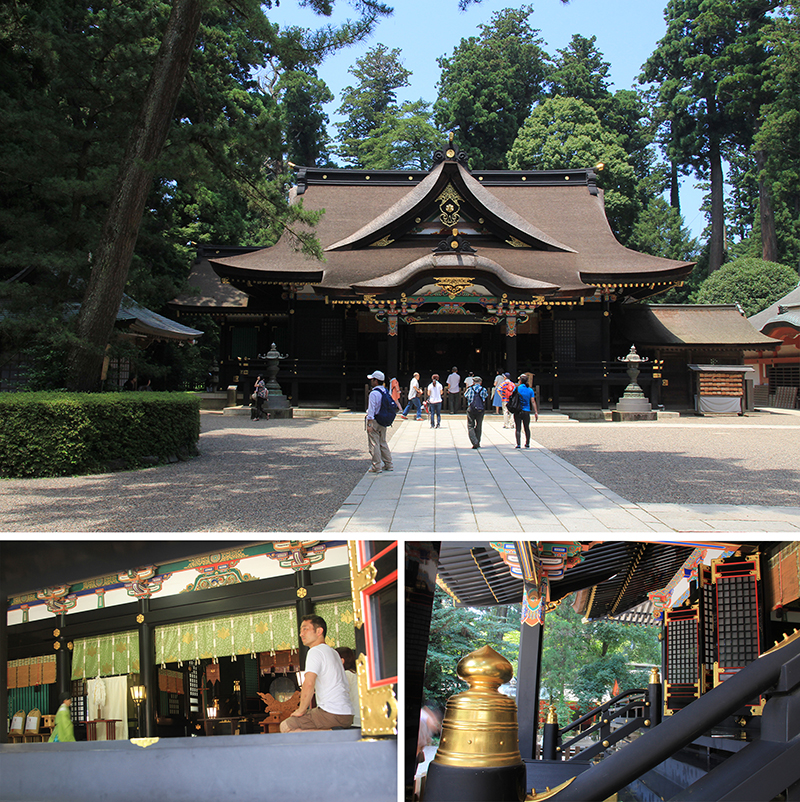 Leaving the shrine was like walking back into an oven. The moment we left the red torii gate we left the protective shades of maple trees. Outside the shrine were many shops selling souvenirs, foods, coffee, beverages etc. We stopped at one the shops for a coffee break. We ordered a lemon shaved ice and paid ¥500 for it. I thought the shaved ice was pretty expensive as we could get them at a quarter of the price back home. Unfortunately tourist destination demanded tourist price.

Shops outside road leading to entrance of Katori Jingu

We thought we would be able to walk from the shrine to Sawara Historic Town easily as it was only 2.5 km which could be done in 40 minutes. Unfortunately it turned out to be a 1.5 hour walk. The weather was unbearably hot and there was no shades along the road. So we had to make frequent stops to hide in convenient stores to cool down. Along the road there was no bus or taxi or people, I could only guess that everybody was hiding indoor because of the heat. We regretted not taking down the mobile number of the taxis driver who took us to the shrine early in the day, we had no other choice but to walk. Finally after the long tiring walk we reached the historic town by the Tone River.

In this historical town, the streets remained much as they were in the Edo period. The buildings were 100 to 200-year-old, and they included furniture stores, general stores that were still operating as family businesses. The Tonegawa river that ran through the town added a nostalgic feel in the air. 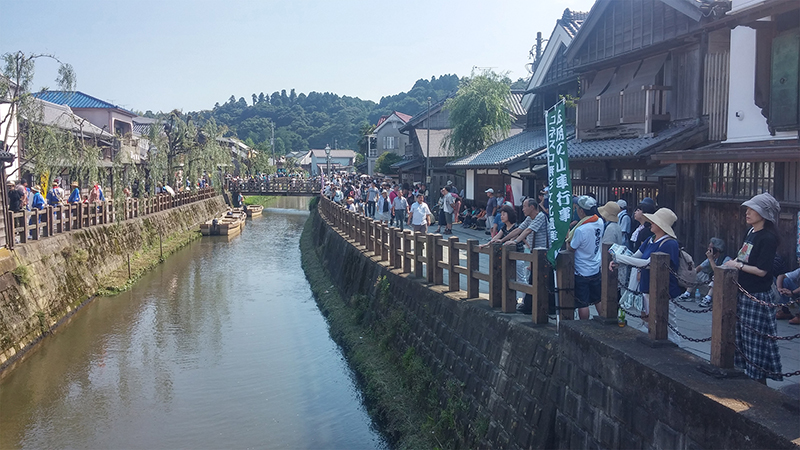 We strolled down the street on one side of the river walking from one end to another. The river, the willow trees and the traditional houses formed a very scenic picture. When the sun began to set its rays cast a golden hue on the buildings and brightening up the river surfaces. It seemed like a magic brush had swept through the town adding a transparent layer of golden sheen to it. 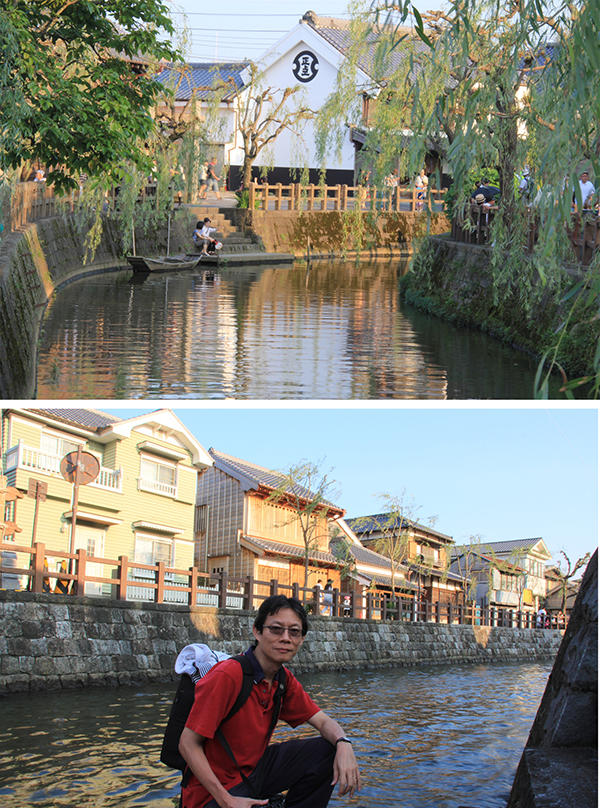 This 300 year old traditional festival spanned three days and is held yearly on the 2nd weekend of July. The matsuri festival is supposed to ward away evil spirits and sicknesses that surface during the summer season. The wooden floats riding on huge wooden wheels are dragged through the streets by participants pulling two long thick ropes tied to the front of each float. On top of each float there would be one gigantic figurine as tall as 4 metres high.These figurines feature gods, mythical heroes and creatures. They were made by skilled craftsmen from the Edo and Meiji period and are highly recognized for their artistic and cultural values. 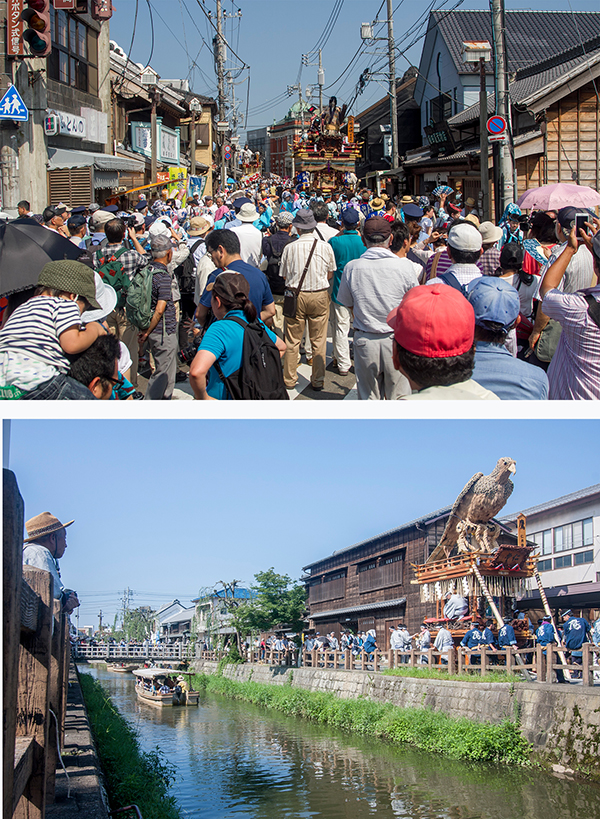 The floats were being dragged onto the road along the Tone river from a perpendicular road. The crowd at the intersection was massive. Everybody was sticking up their heads eagerly waiting for the arrival of the first float.

At the intersection the floats turned left and went down the road on one side of the Tone river. We were standing on the other side of the river and got a clear view of the floats passing by.

The huge figures on top of the floats were taller than some of the electrical cables that criss-crossed the street. Occasionally the float would come to a stop and a participant that was stationed on the roof of the float would go about lowering the figure such that it would not hit the overhead electrical cables and raising the figure after passing under the cables. It was a tedious, slow and strenuous procession but the participants were all very energetic, full of patience and very careful. 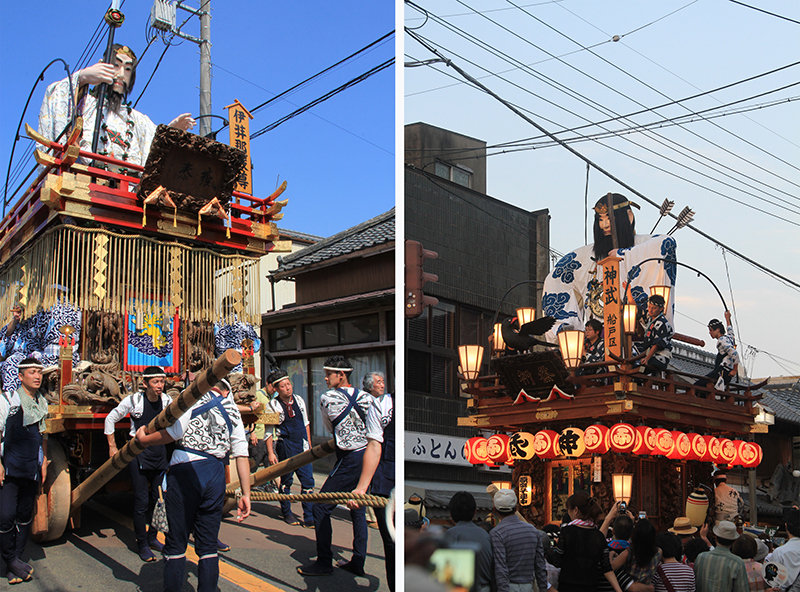 The festival went on into the night. Just when the sun was setting, we saw the float participants getting ready a series of lanterns and lighted them. These lanterns were then hung on the floats. The lanterns glowed warmly turning the town into a golden ancient town as the floats once again parade along the Tone river. 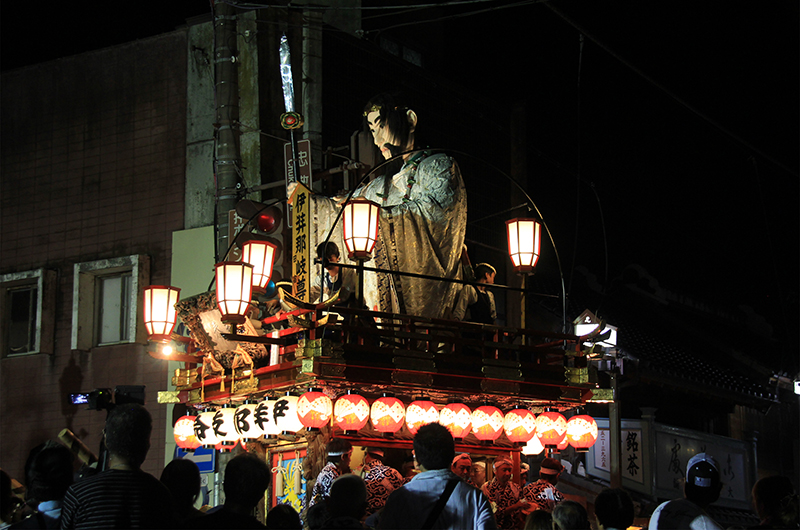 Soft lively music filled the air as the tireless musicians sitting on the floats play on and on. Every participants I saw seemed to have endless energy, they went on and on pulling the floats, they chanted, they danced, they were joyfully immersed in the festival.

Unlike in the afternoon when the floats turned left when they reached the intersection of the Tone River, this time some floats turned left, some turned right, some even crossed the river and went onto the road on the other side of the river. Eventually many of them were parked at interval along the roads on both sides of the Tone river as the participants stopped to dance, to sing, to drink and to rest and relax. 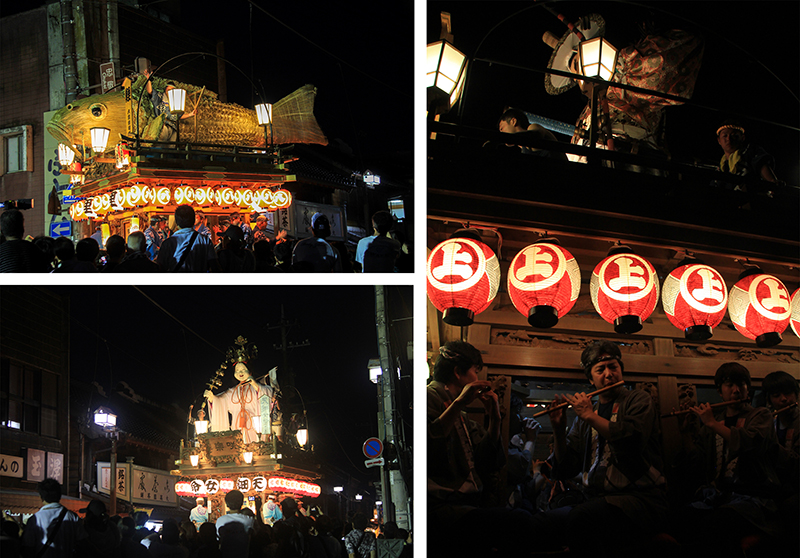 Both festivals were a joy to attend. Each had its attractions. The Narita Gion Festival had a larger crowd, there were also many street vendors selling all types of street food. Beside the floats, I also saw many other groups parading in the festival. The Sawara Matsuri Festival was smaller in size, but seeing this 300 year old traditional festival taking place in a historic town was very impactful and memorable. If I could only pick one festival to attend I would choose the Sawara Matsuri Festival.