Not all our targets were achieved. We were only able to visit the Lavender/Flower Farms!!!

We flew Vanilla Air from Narita to Hokkiado. Vanilla Air is a Japanese Budget Domestic Airlines. We bought the return tickets for flights between Narita and Chitose some four months ahead of our trip just to catch the price at its cheapest. The return tickets costed around $190 SGD per person which included a one piece of check-in luggage (20 Kg).

Vanilla Air flew from the newly completed Terminal 3 of Narita Airport. Unfortunately getting to this new terminal was not very straight forward. We had to take a train to Narita Terminal 2 Station and walked about 400 metres, in 15 minutes to the Terminal 3.

We did considered taking the free Terminal Shuttle Bus but the bus would take long round about trip that go from Terminal 2 to Terminal 1 before stopping at Terminal 3 and the bus trip would require at least 25 minutes.

We did consider taking the free Terminal Shuttle Bus but the bus would take long round about trip that go from Terminal 2 to Terminal 1 before stopping at Terminal 3 and the bus trip would require at least 25 minutes.

Picking Up my Nissan Rental Car

Car rental companies in Hokkaido did not provide car pickup at the airport, which was not the case at Narita Airport. So at Hokkaido the rental companies set up counters at the airport and provided free shuttle services to ferry their customers from the airport to an offsite location where customers complete the paper work and pick up the car. Similarly when the customer is done with the car, the car will need to be returned to the offsite location and the customer gets to the airport using the free shuttle services.

We took longer than expected to finally pick up our Nissan Car, the entire process took about 2 to 2.5 hours. Definitely too long and a waste of precious time especially considering that we were not walk-in customer.

We first had to queue and register at the Nissan Airport Counter, then we had to wait for the free shuttle service to pick us up and transport us to an offsite Nissan Car Rental Outlet about 5 km away. At the offsite office there were even more customers waiting to pickup their cars.

It seemed like more tourists rented car when touring in Hokkaido than in other parts of Japan. I definitely did not remember having to wait that long when picking up my rental car in Narita during my 2013 trip. 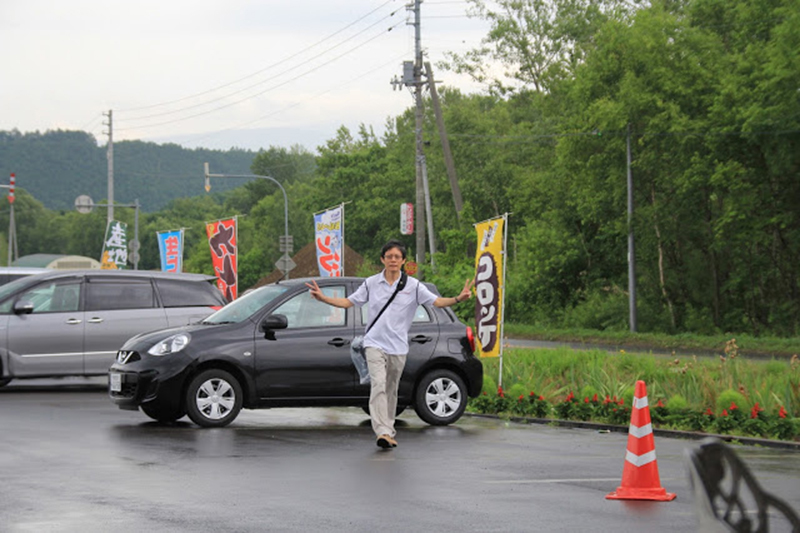 So much precious time had past before we were guided to our car, a little black Nissan. Our standard procedure for taking over the car was to firstly walk around the car looking out for scratches and to highlight every single scratch no matter how minor as this would minimise dispute when we returned the car. Next we got the staff to explain all the car controls, like brake, clutch, light switches and GPS before setting off. 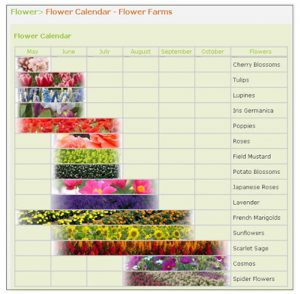 I always thought that one should go to one particular area called Furano to see summer flowers, but that was not the case. Around that Furano there were KamiFurano, NakaFurano, MinamiFurano and others. These places had many flower farms. The famous Farm Tomita was located in NakaFurano.

Due to the limited time, our plan was to focus on two of the more famous farms, Farm Tomita at Naka Furano and Flower Land Kamifurano at Kami Furano.

Driving to Farm Tomita was very easy once the mapcode of the farm was entered into the car GPS. We reached the farm after 2 hours drive and found the place crowded with people and vehicles. The good thing was that there were many traffic controllers around and we were quickly directed to an empty lot in the packed car park. 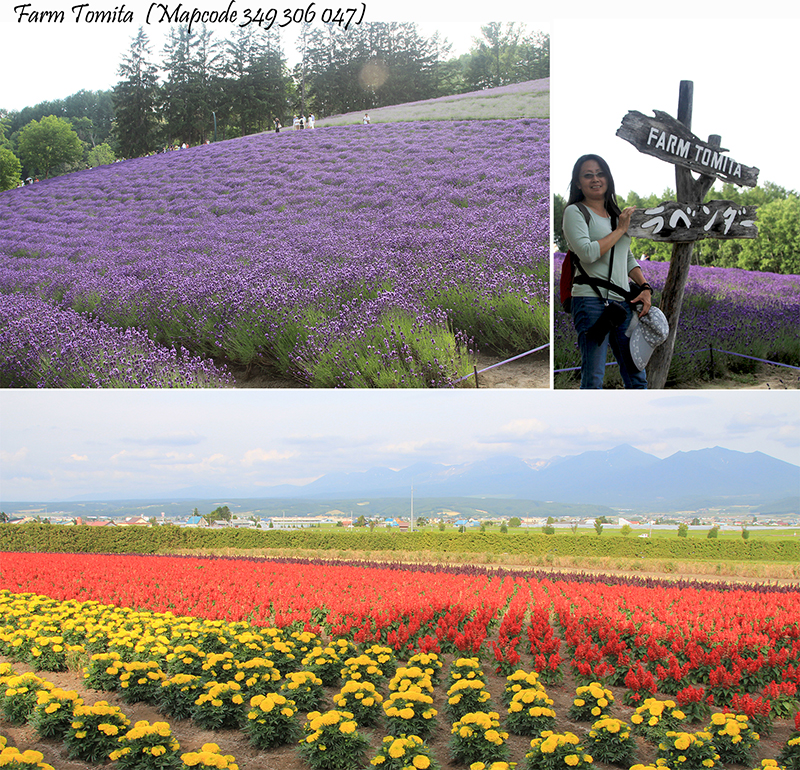 The lavenders at Farm Tomita had bloomed, the lavender field was pretty but the patch of purple was not as vast as we expected. As we walked around we saw other flowers, though they were beautiful we felt slightly disappointed because the vastness of the flower field was below our expectation. Rather than to spend more time exploring Farm Tomita we decided to skip the rest of the farm and move on to Lavender East, another farm nearby (about 4 km) . It was already 4.30pm so we had to move quick before the Lavender East closed.

We drove quickly over to Lavender East hoping to catch sight of a bigger field of lavender, unfortunately that vastness was also not there. Some stretches of lavenders had yet to be at full bloom. Lavender East is also owned by the same owner of Farm Tomita. 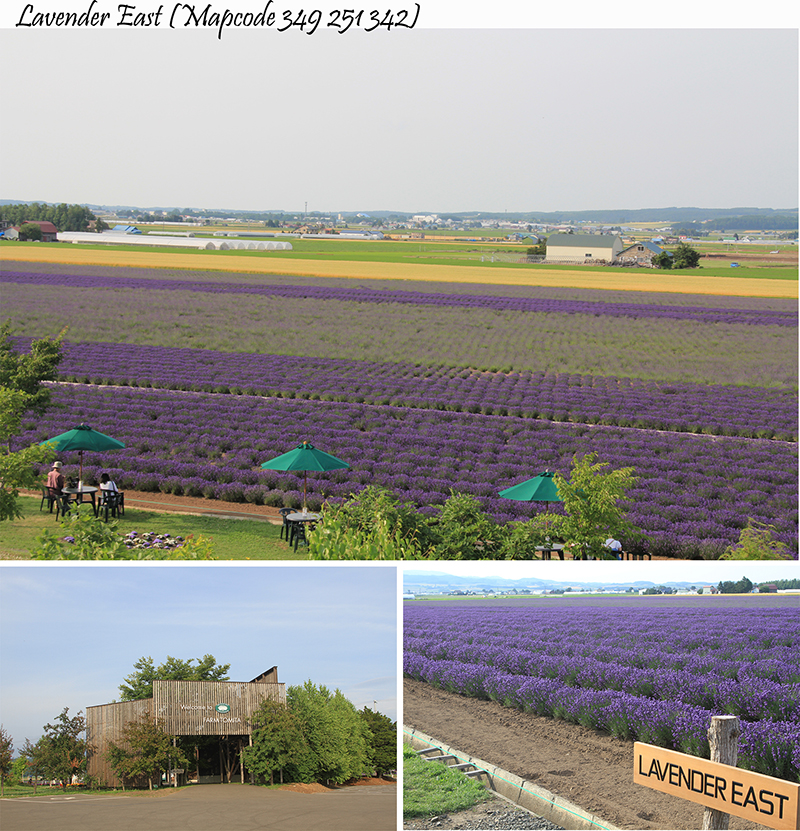 Though it was already past 5.00 pm we drove on to FlowerLand Kamifurano hoping to catch it before it closed. Anyway FlowerLand Kamifurano was along the way to Biei where our hotel for the night was located. We were taking a risk of being turned away because visiting time at the Flower Land was already over. On the way there, I realised that I did not have the mapcode of FlowerLand on hand so we could not plot the route using our car GPS system. Luckily we had internet service so I quickly activated Google Map on my handphone and guided Yat Thong to our destination. 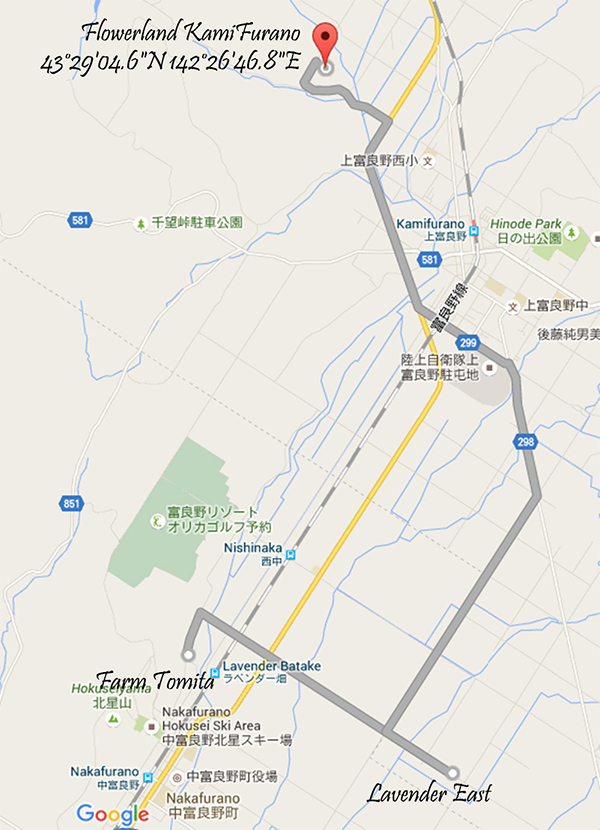 Route from Lavender East to Flowerland

Prior to leaving Singapore I had already saved all my destinations on google map. All saved destinations appeared as “stars” on my google map, this made it very easy for me to locate a destination on the map whenever needed.

By the time we reached Flowerland it was almost 5.30pm and there was hardly any visitors. Beside us there were only three other couples so we got the whole place to ourselves. The sun was setting and the mad heat of the day was over. This made our stroll at Flowerland very enjoyable. 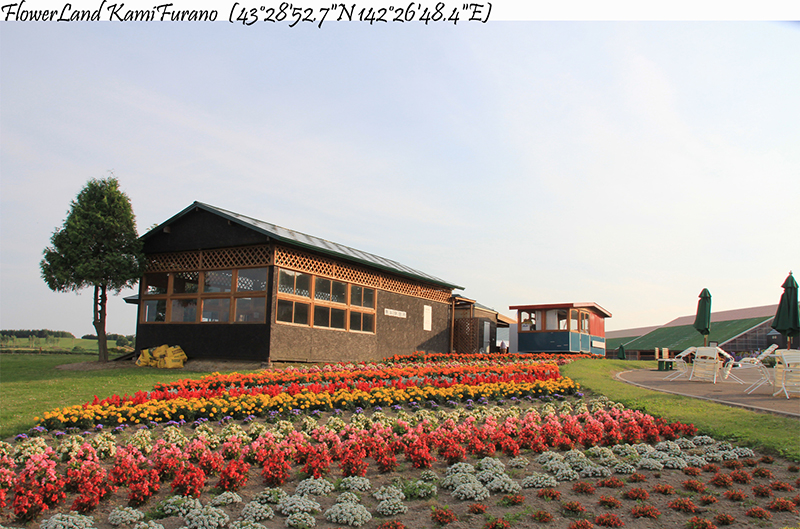 I found FlowerLand more beautiful than the earlier farms we visited. It felt peaceful and tranquil, I particularly enjoy the “wild flower” field because of the mishmash of flowers of orange, red, white and yellow colors. It did not give me a feeling of an artificial field where the flowers were orderly planted. 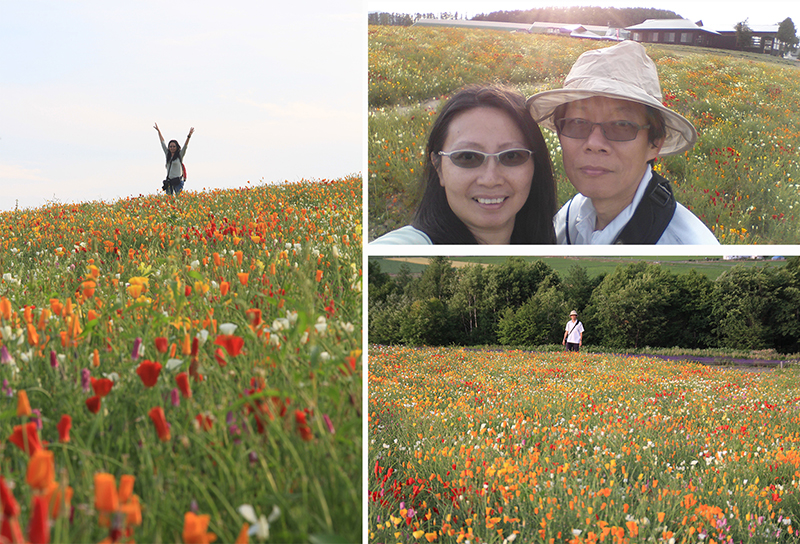 We were the last couple to leave the farm, after we walked out the gate, the staff closed the shutter. Oop!!! They were too polite to chase us out even though visiting hour was long over. We being typical Singaporeans stayed on assuming that visiting hours was not over because nobody told us to leave.

Biei was a small town, surrounded by a picturesque landscape of gently rolling hills and vast fields. The area northwest of the town center was named “Patchwork Road” and the area south of the town center “Panorama Road”.
Patchwork road was an area and not a particular road. It was named after the patchwork appearance of its fields that offer beautiful rural landscapes around the year, especially during the green and colorful summer and autumn months. Like the Patchwork Road, the Panorama Road was also an area rather than a single road. It offered very much of the same rural and scenic beauty as the Patchwork Road.

Unfortunately, because of our late starting off at New Chitose Airport, by the time we drove towards Biei the sun had set. So there was nothing much to see, no worries we believed we do have some spare time available the next day and with some adjustment we would be able to include sightseeing of both Patchwork and Romantic Roads.

After we dropped our luggage at the hotel we requested the receptionist to recommend some good dining locations. Apparently the hotel was at the town center and we did not have to go far in search of a good restaurant.

We ended up at the restaurant called Daimaru, it was within walking distance from the hotel but since we had a car we drove right up to the restaurant and parked at a empty space beside it. 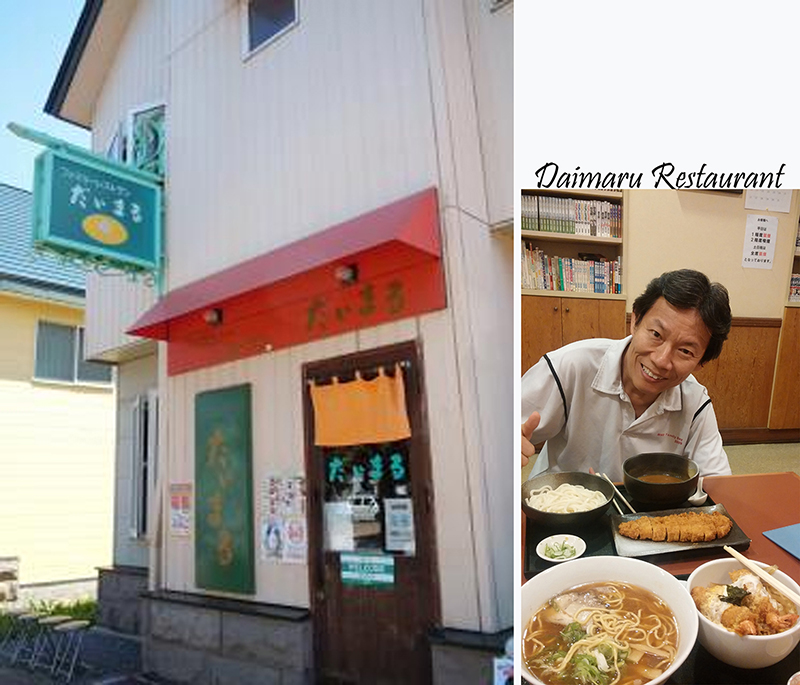 Though there were tables and chairs we chose to take off our shoes and sit crossed legs at a low table. We ordered our food which costed a total of Yen 1750. The food were quite nice and tasty and were served in very generous proportion.

Accommodation for the Night at Biei : Hotel Lavenir

When I was searching for accommodation in the vicinity of Biei on Google map I came upon several facilities, unfortunately most of them were not listed on any hotel booking websites and they did not have their own website for online reservation either. At that time, I wished I could speak Japanese so that I would be able to call in to check prices and make room reservation. In the end the only hotel in Biei I could book online was Hotel Lavenir and it was rather pricely. 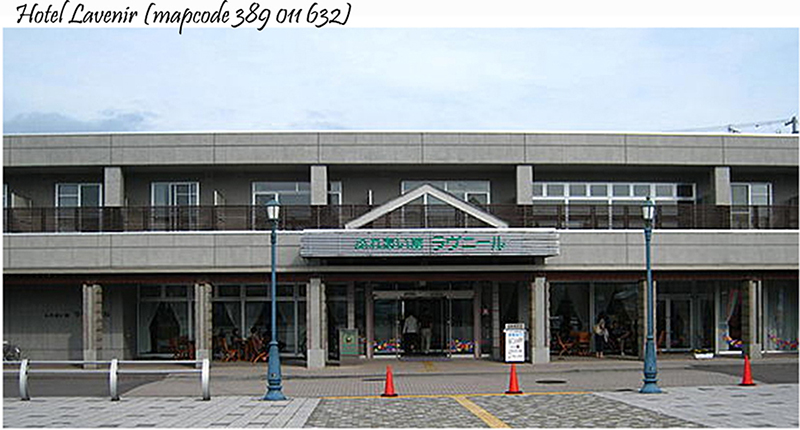 Hotel for the Night (Hotel Lavenir)

Hotel Lavenir charged $190 a nite for a twin room, it came with ensuite bathroom and breakfast. When I reached the hotel, there was a sign indicating that the hotel was “Fully Booked”. I was glad that I had booked the room earlier and did not take the risk to walk-in for a room. July is high tourist season in Biei so it is not surprising that most hotels are fully booked.

Our twin room looked so spacious especially after the small room we had the previous two nights. There was enough room for two us and our bags and still had space for us to move around comfortably. Bathroom was large too with a good size bathtub. Room was clean and smell new. Wifi signal in the room was strong too. Parking was about 50 metres away from the hotel and was free. 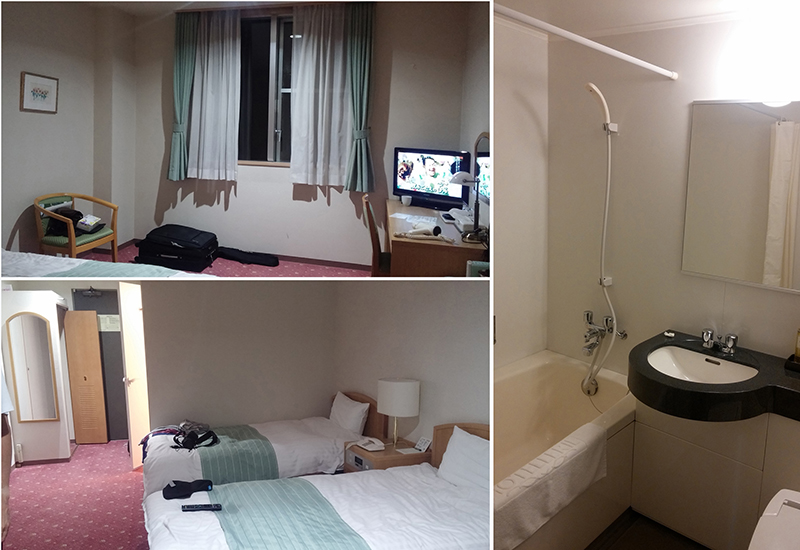