The plan for day 3 was to rest and relax in the hotel. As for lunch and dinner we intended to go to some restaurants at the famous Pub street. 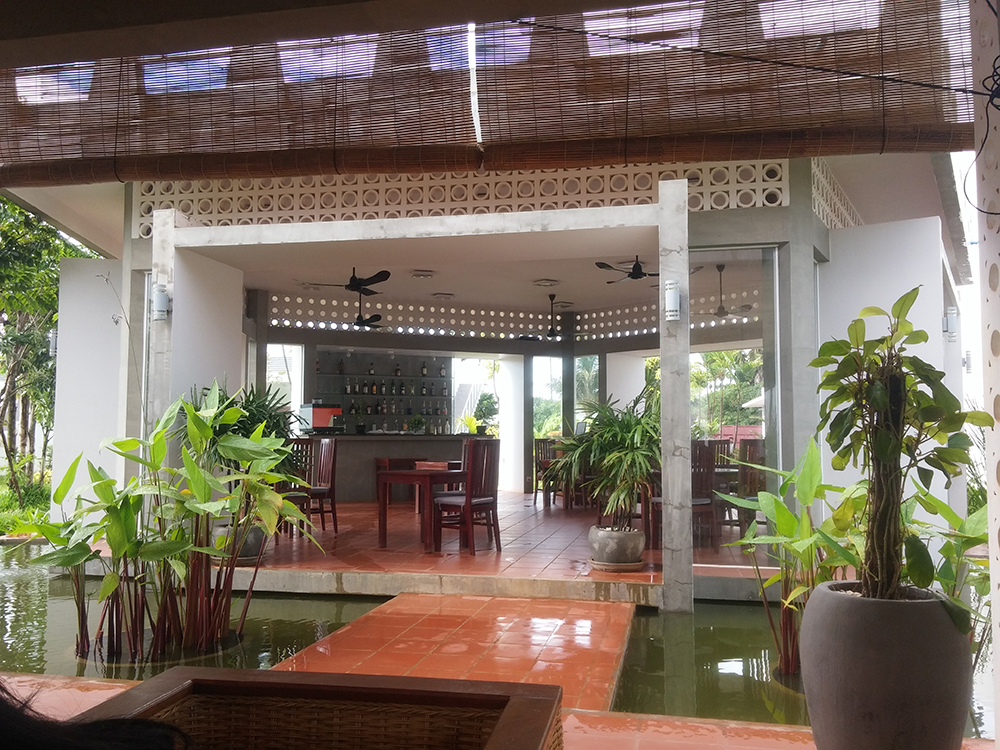 We had breakfast at the same hotel dining room as the day before.  Actually the dining room was not a real room because it did not have real walls. It was a very open room  with roof and columns and was very bright and airy.

This morning when we stepped into the dining room we saw only one other couple finishing their breakfast and they left shortly. The dining room had only a few tables and even though we were the only family eating breakfast there it did not feel deserted. In face we felt very pampered to have two staff taking care of our needs and serving us drinks and food. When we requested for fruit juices they were always freshly juiced and not from the bottle. When we requested for coffee, it would be freshy grinded and made too.

The dining area looked out to the pool and the bungalow units. The blue water, the white bungalows, the greenery and the clear sky created a very pretty picture. It was very easy to rest and relax as we chewed on our breakfast, it was easy to slow down and forget about our busy lives back home. 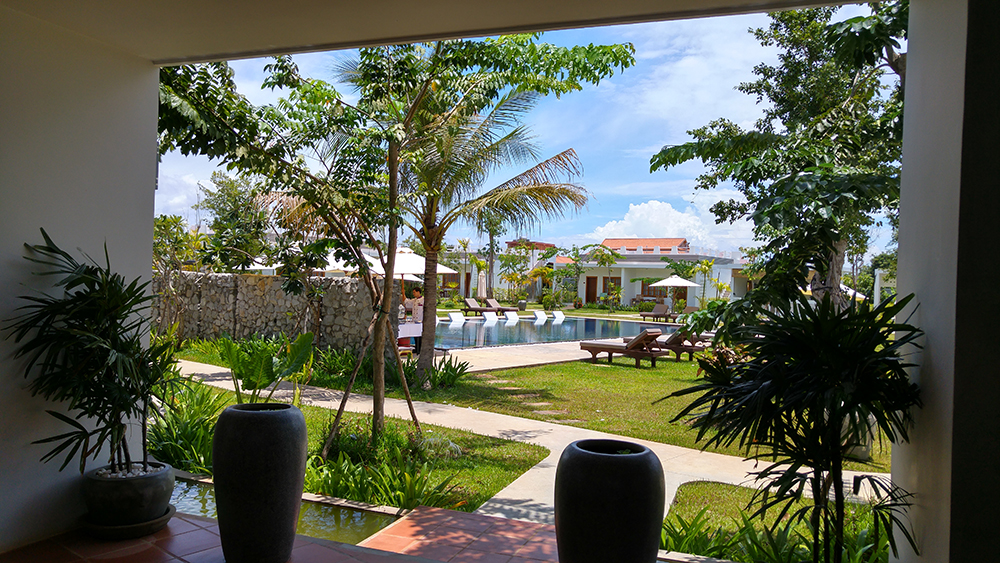 View from the Breakfast hall

It started raining heavily in the early afternoon so we had to abandon our plan to visit PUB street for lunch. By late afternoon the rain turned into an on and off drizzle. Though it was drizzling the sky was still quite bright and clear. In between drizzles we went outdoor to take some photo shots. As expected a full rainbow could be seen from our roof top. 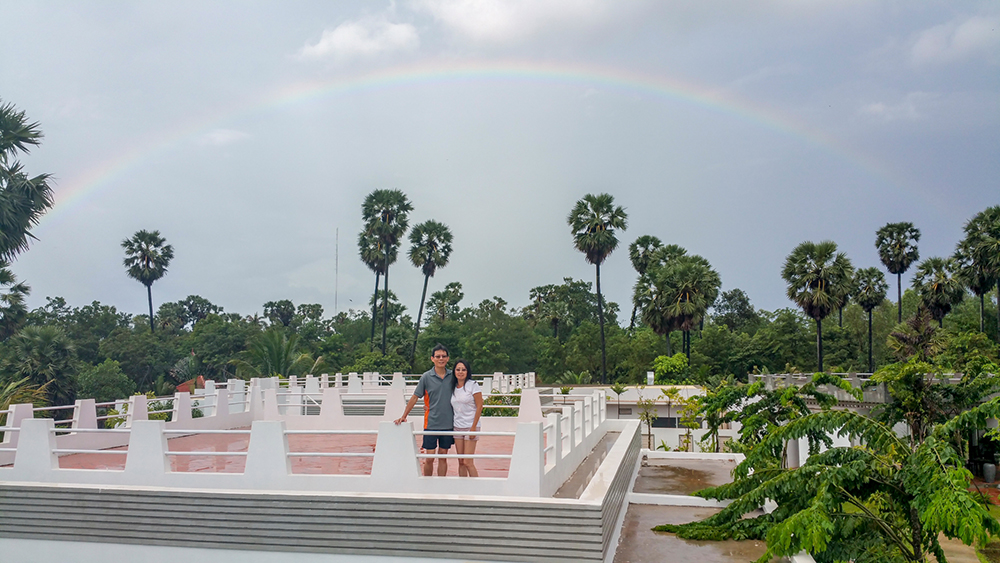 The hotel provided free one-way tuk tuk services to PUB Street and anywhere else to Siem Reap downtown . So at around 6.00 pm we set out to PUB street.  It was drizzling lightly so the driver let down the rain shades of the tuk tuk. Wow, what an efficient little vehicle. 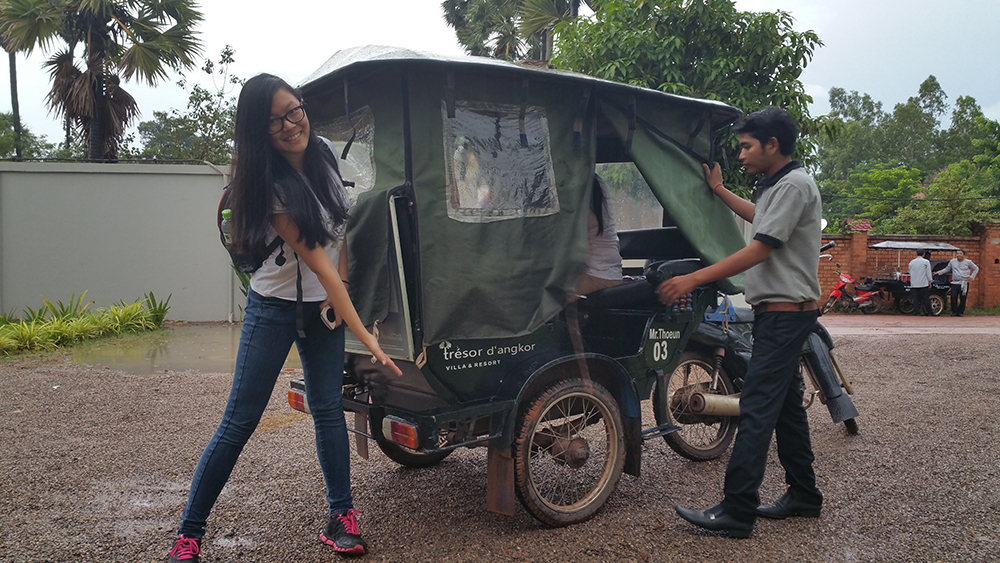 Down came the rain shade

At  Siem Reap downtown, the driver stopped the tuk tuk just after a particular junction and told us that there were many restaurants along this street where we could have our dinner. I did not know where exactly was PUB street but was perfectly happy to eat dinner first before exploring. “It must be somewhere nearby,”  that was my thought.  We arranged with the driver to pick us up at the same location he let us down in about two and a half hours later. 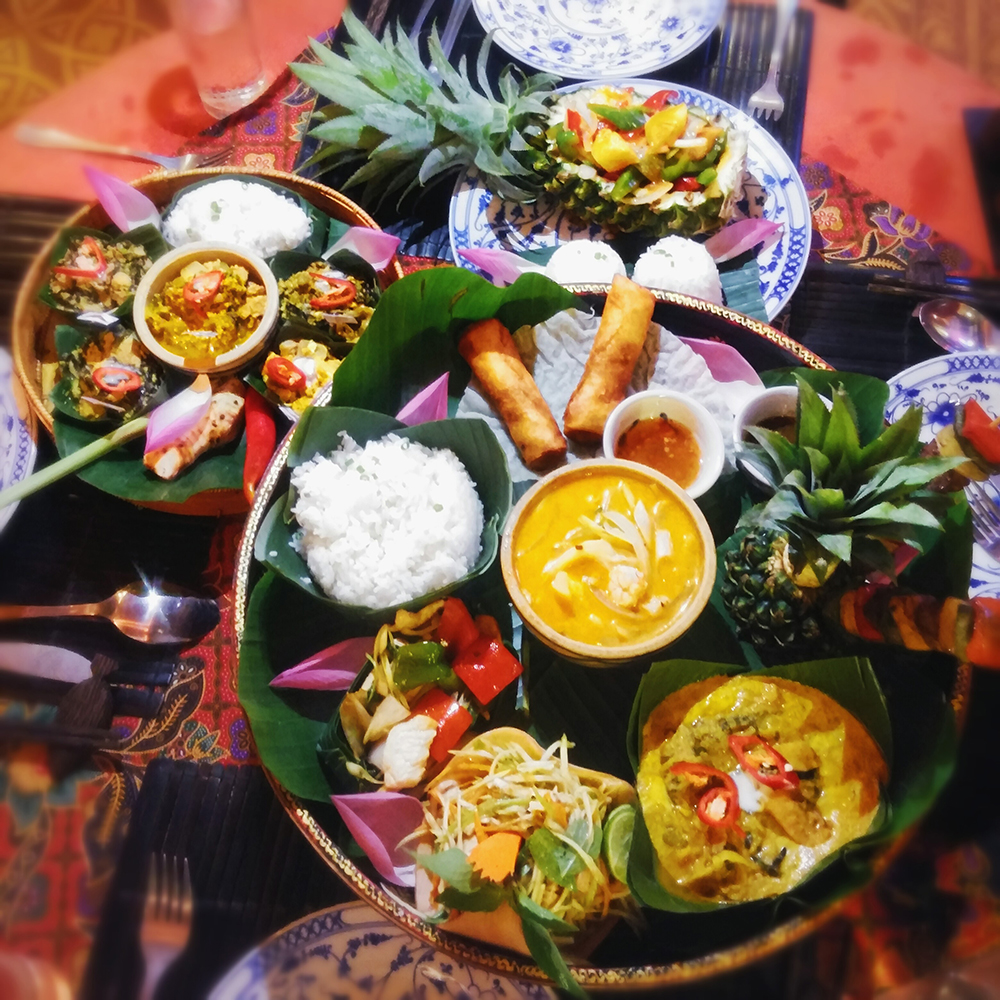 Too pretty to eat!

The canopy just outside the restaurant said “Recommended by Tripadvisor “. I was not sure how true was that claim but since we had no preference we decided to give it a try. We ordered one for their combo meals that came with a few types of meats like pork, fish and chicken.  The presentation of the food was very colorful and the food tasted as good as it looked.

The meal costed about US$70 which was not cheap considering that this is a third world country. But since we enjoyed the meal and the quaint decorated furnishing of the restaurant we did not mind the cost.

The side of Amok restaurant opened out to a pretty alley with glass-top roof. Along the alley were several restaurants and stalls. So after our meal we walked down the pretty alley to explore these shops before heading to PUB street. 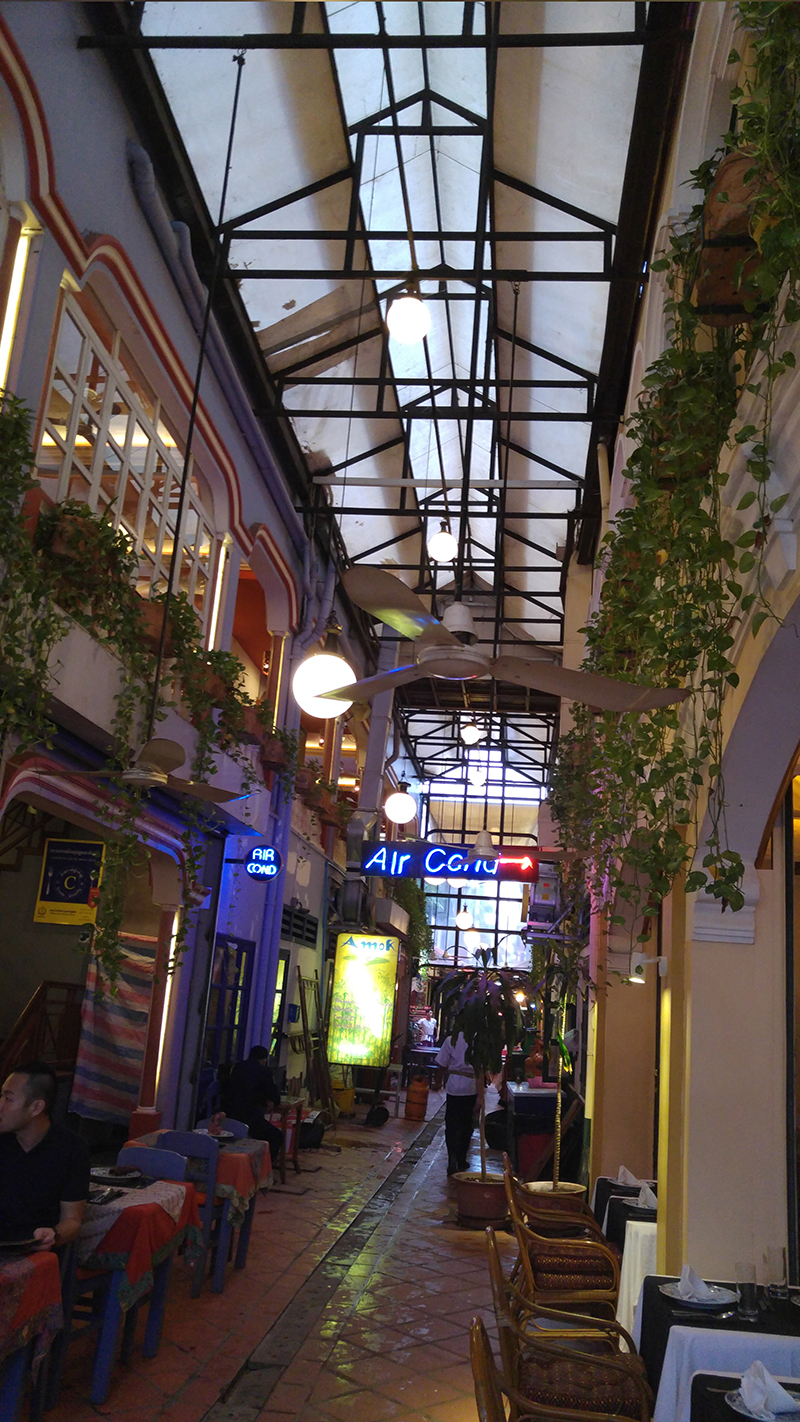 Interestingly the alley led us to PUB Street! It was impossible to miss it because the moment we reached the end of the alley, we could see huge neon lighting with the words “PUB street” spanning across buildings.

Pub street was very touristy, it was brightly lighted with many of restaurants and street stalls. The drizzle had stopped and the place was crowded with tourists. The atmosphere was vibrant and the mood very festive. 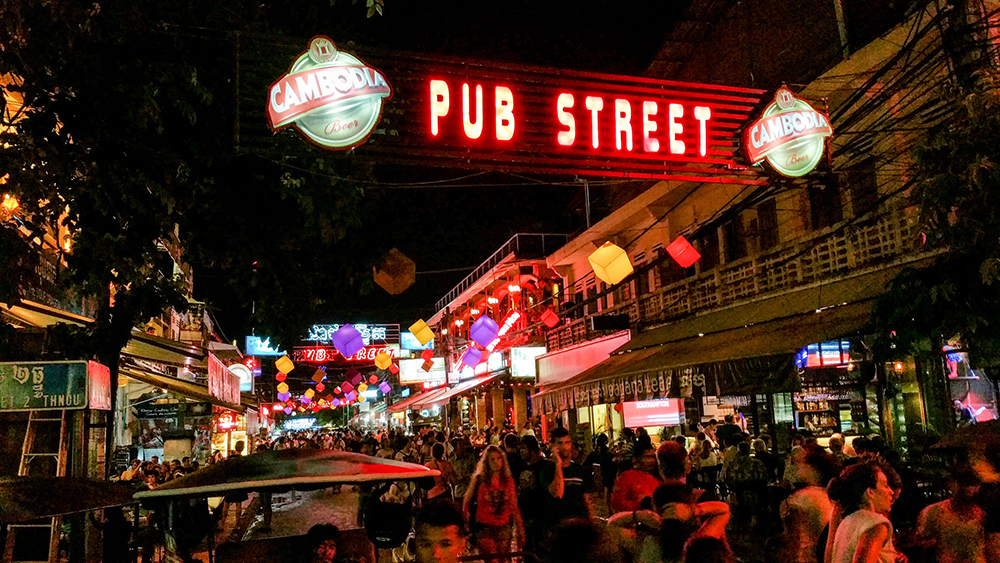 Though we were full from our dinner our stomachs still had space for deserts. We kept our eyes open searching for finger food.We came across a “Magic stick” icecream store and could not resisted buying one just for the fun of it. We had to share the ice cream among us four because it was melting too quickly.

We decided to walk over to the Night Market that were just a couple of streets away. We were told that it was a market visited mainly by locals and the products sold there were priced more reasonably. My only worry was whether the Night Market would be selling the things that we would like to buy and bring home. 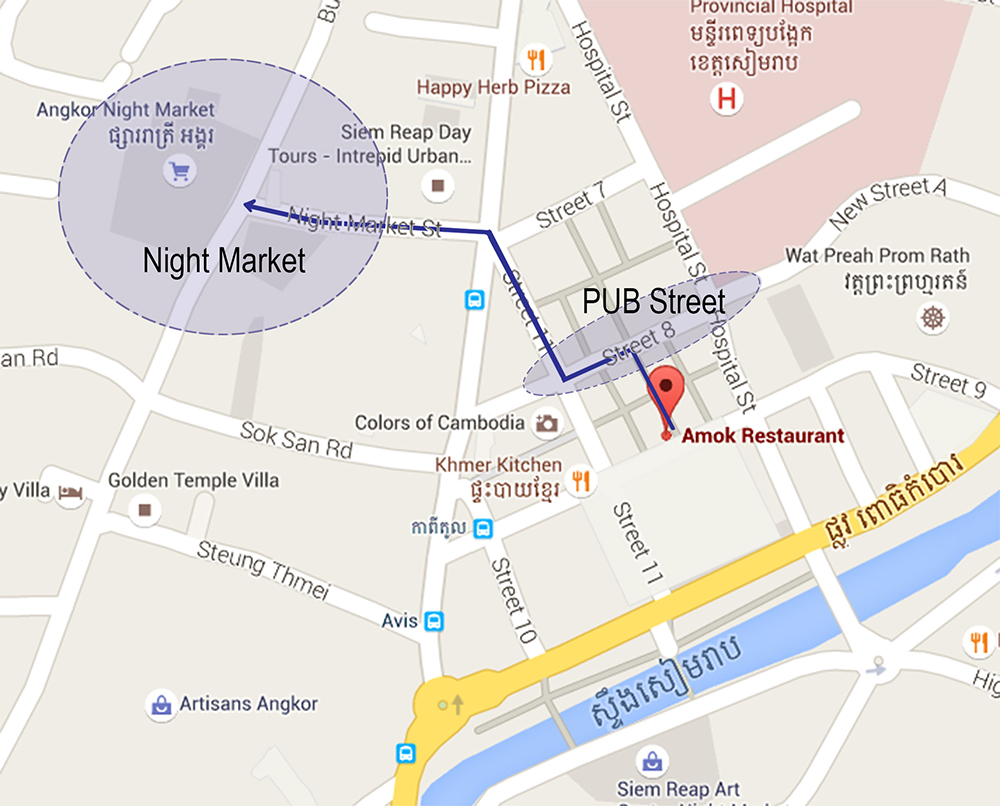 The Night Market was not as crowded as the PUB street. There were more stores selling stuffs than food. We  bought five harem pants for US$2 each, a hammock at US$5, a wooden face craving (Bayon Temple) at US$8 and a wooden dog puzzle US$5. Quite a good buy. 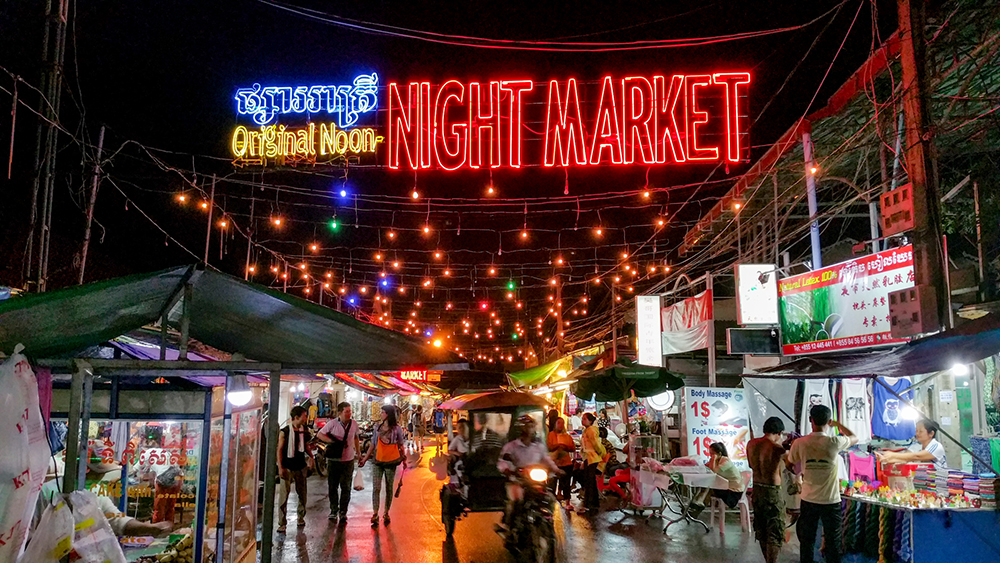 I was glad to have walked over to the Night Market. As it was not crowded, I was able to browse the items at my own pace, talk  to the sellers and bargain for better discounts. I felt guilty bargaining as I often wondered if I was depriving the locals of making a small profit. But on the other hand I also often heard about seller ripping off tourists. So I just had to assume that if my proposed price was too low they could always reject my offers.

Time was almost up so we walked back to Pub street to meet our tuk tuk driver. It was a pity that we had to leave, two and a half hours was not enough three hours would have been better to fully explore the entire Night Market and PUB street. 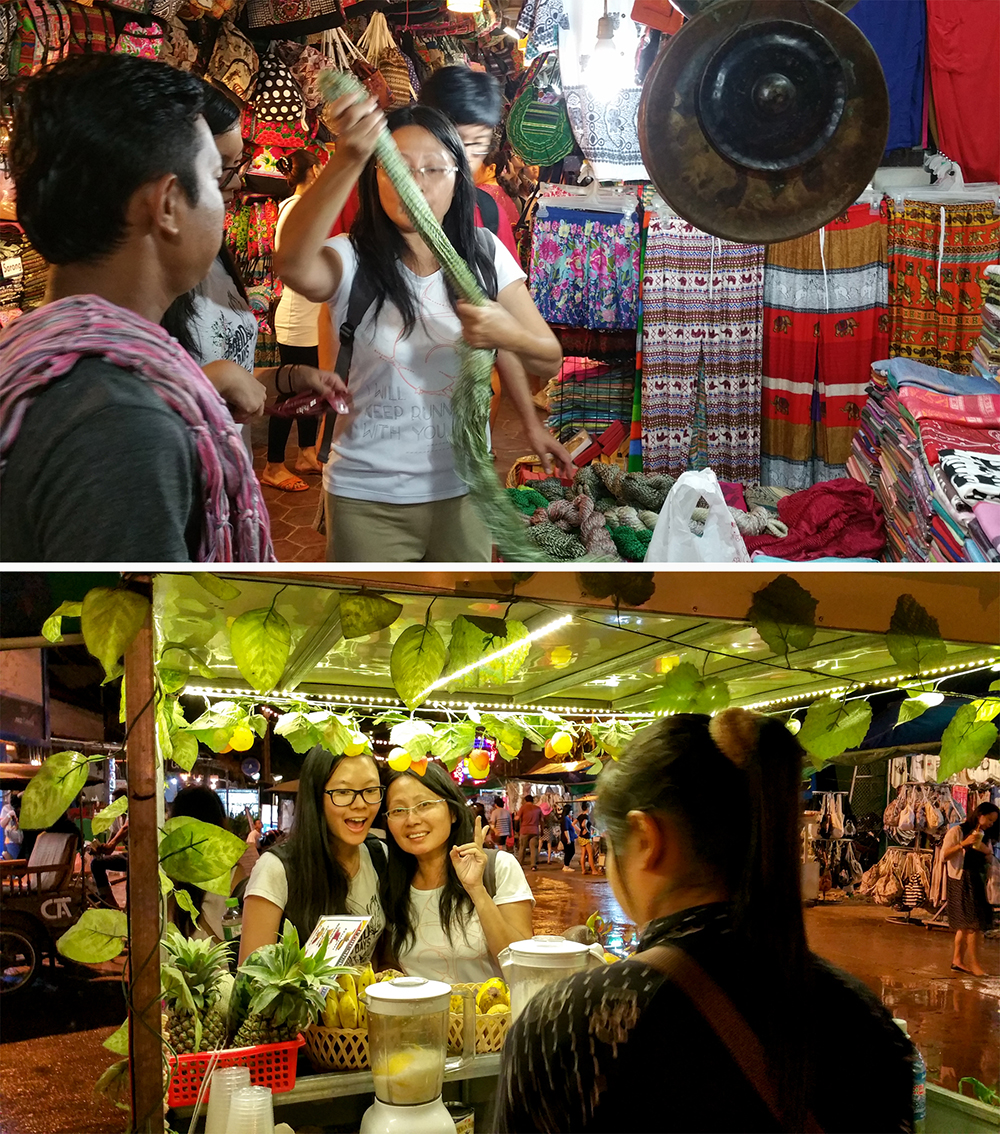