It was our last day at the hotel. Our flight out of Siem Reap was at 3.00pm which meant we would need to leave the hotel by around 12.30 pm. I had already arranged with the hotel staff to send us to the airport. The transfer was free as it was part of our 3-night stay packet.

At about mid morning we went for a last swim at the hotel pool. While swimming we saw a “cooking class” being conducted by the pool side. A staff told us that two ladies were learning to cook Khmer dishes from the hotel chef. The lesson started with a trip to the market in the morning to buy the necessary groceries. Well we had pottery lesson and others had cooking class.

We checked out of the hotel at about 12 noon since we were still early for our ride to the airport, we went to the dining room for some fresh fruit drinks. I had fallen in love with Siem Reap pineapple juices, really sweet and refreshing. 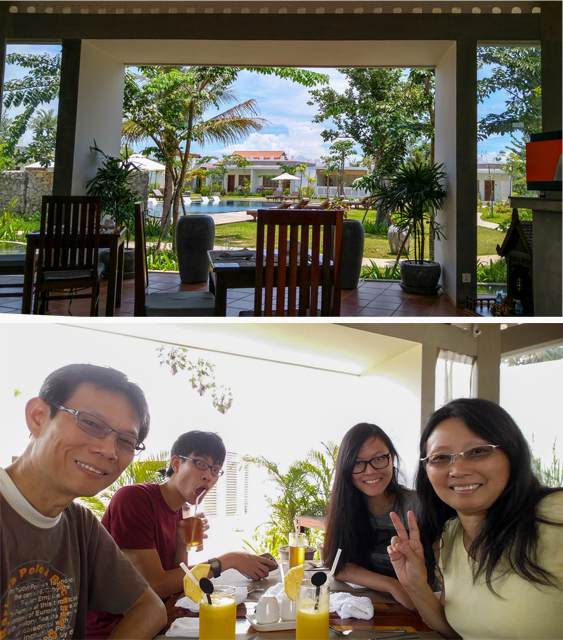 When it was time to leave, we went to the hotel counter to settle all our bills. Three night stay, four six course dinners, a few other small meals, drinks etc. We requested to use up as much of our US dollars as possible and to pay the balance using credit card.

Unfortunately there was some problems with the credit card system. The payment could not be completed with my hubby’s card or my card. For a while we were wondering how to settle the balance as we did not have any more cash. Luckily after waiting a while the problem of the credit card system was resolved and the payment went through.

We reached the airport at about 1.10 pm and there were many long queues at the airline counters in the departure hall. Our printed online check-in boarding passes cannot be used directly, they had to be exchanged for the actual boarding passes. So we had to join a queue to get our boarding passes. It was a long wait to be served, first the systems was down for a while, then there was this blond lady having some issues with her check-in luggage. After bickering with the counter staff for a long while, holding up everybody behind her in the queue, she finally opened up her luggage and pulled out some items and stuffed then into her hand carrier and those of her friends’ before checking in her luggage. At last the queue was moving, once she was gone the queue moved so swifty and in less than 5 minutes we got our boarding passes.

With our boarding passes we moved to the next hall to join more queues at the immigration counters. Another queue another wait. This time we got through smoothly. No “tips” request from any immigration officier, unlike when we came in three days ago. 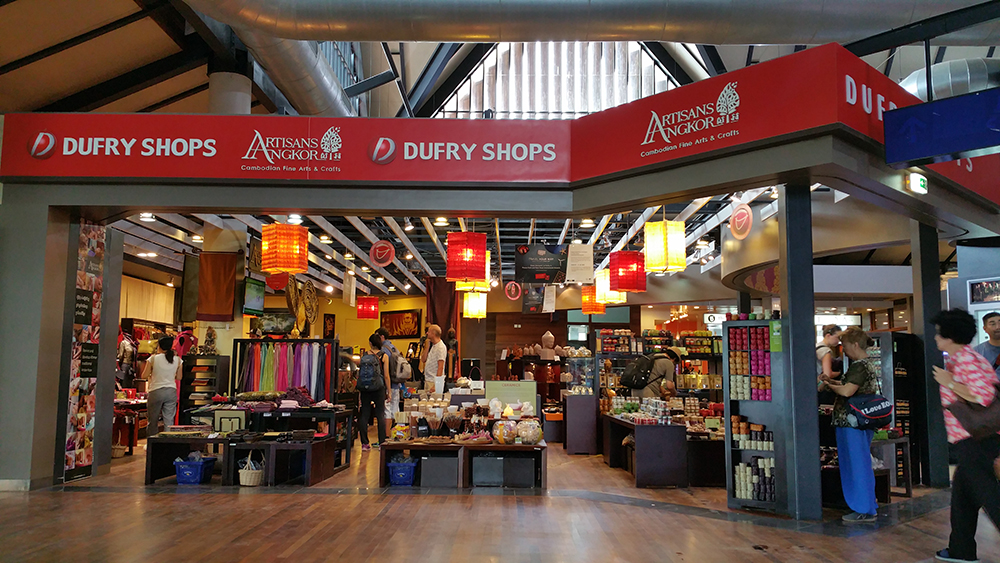 Surprisingly the departure hall was quite nice. Bright, cool, airy, clean and modern looking. There were a few duty free shops selling souvenirs and plentiful of chairs to sit and wait. Unfortunately there was no transit lounges. When it was time for boarding we entered the boarding gate and walked onto the tamac to our plane.

Would I come back again?

As I was sitting on the plane soon to be flying out of Siem Reap I was recalling the words that the hotel staff said to me. They said, “Please come back again.” Would I? 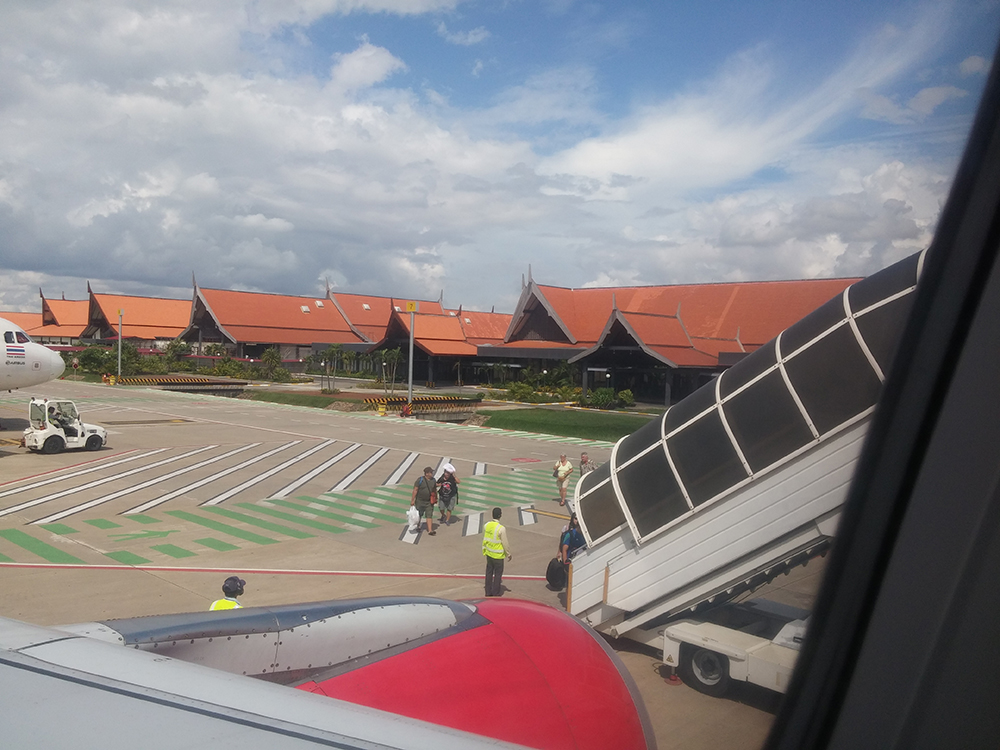 We had a great time at Siem Reap, temple visits, pottery class, Tonle Sap Sunset tour and three days of great stay at Tresor D’ Angkor but I knew I would not come back again. The world is so big, there are still so many places I have yet to visit. Siem Reap is not a shopping paradise like Thailand, Korea, Japan or Hong Kong where one will go back again and again.  So “Bye Bye” Siem Reap for a long long time.

Flew into KLIA2 after two hours flight. Malaysia was one hour ahead of Siem Reap so when we touched down it was about 6 pm local time. Our next flight from KLIA2 to Singapore was 9.30 pm, so we just needed to be at the boarding gate at about 9.00 pm. We had three hours to kill. 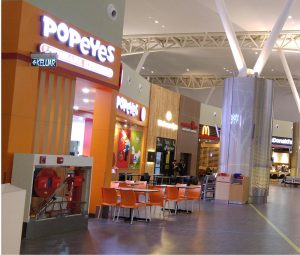 The good thing about AirAsia and Malaysian Airport was that the printed online check-in boarding passes could be used directly so there was no need to go and queue to exchange for the proper boarding passes at some AirAsia Counters.  Our flight tickets from Singapore to Kuala Lumpur and Kuala Lumpur to Siem Reap and back were two sets of return tickets so it was also a good thing that we were not required to exit immigration when we touched down in Kuala Lumpur each time. We were allowed to stay in the transit area which made the transfer process so convenient. 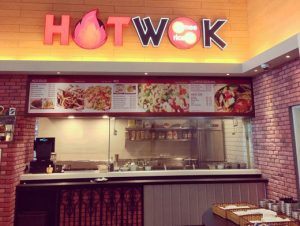 We searched around for a good transit lounges to pass our time. If we were to use our priority passes there were only three lounges in KLIA2 that we could enter. All three lounges were Plaza Premium lounges.

This time our boarding gate was near the Plaza Premium lounge at the 3rd level of the Satellite. Before we signed in at the lounge we requested for a quick look around. Well, we found it lacking in food.  The finger foods that were displayed looked unappetitizing so we decided not to go in. We would be better off eating at the Urban Foodcourt at 3rd level of the Satellite. At  least we could order proper meals from Hot Wok.

I could not understand how the same brand could offer lounges of such drastic difference in standard!!! While eating we started surfing Singapore Channel News Asia website to watch Singapore 50th National Day live parade on our mobiles. We had always watch the parade every year and this year though we were out of town we still watched it.

There was no difference watching the live parade from the Television in our living room at home or at Kuala Lumpur Transit (KLIA2). Of course nothing was better than to watch the parade at the floating platform (Marina Bay) where the parade and performance were held but it was impossible to get the tickets to the parade/performance.

We boarded the plane on time and was back at Changi International Airport Terminal 1 by 10.00pm. For citizen we could make use of the automated immigration check which let us through the immigration very fast and easy. At the arrival hall we joined a long queue for the taxis. Though the queue was long, it progressed very fast because there was also a long queue of taxis outside the terminal. Two airport staff was efficiently guiding the taxis into empty taxis bays and customers into empty taxis.

There was a Chinese man who instead of joining the taxis queue walked directly to the taxis bays and tried to board a taxis. The taxis driver refused to accept him and the airport staff told him to join the queue. Hurray to the Taxis driver, hurray to the airport for not condoning queue jumper.