Our plan for the day was to stay in Split and explore places like Marjan Hill and Bene Beach. The Marjan walking trail was about 6 km which could be completed in about 1.5 hr at normal walking speed. Since it was our last full day in Split and Croatia we were going to have an easy and relaxing day. Dinner would be in one of the cosy local restaurants (no more home cooked food) that we had walked past last two days.

Walking Route for the day

We walked the Marjan Trail going all the way to Bene Beach, it seemed further than we expected and we were so exhausted by the time we reached the beach. It was supposed to be about 6 km but it felt like 10 km, it took us 2 and a half hour to reach Bene Beach. On the return trip we took the town bus. After a great dinner at a local restaurant we explored the town till late at night.

From our apartment we walked to Vidilica Cafe which was sited at the start of Marjan Trail. The trail extended up to Marjan Hill & Park Forest. Marjan Hill was on a peninsula, it was covered in a dense Mediterranean Pine forest and surrounded by the sea on three sides and the city on its east side. 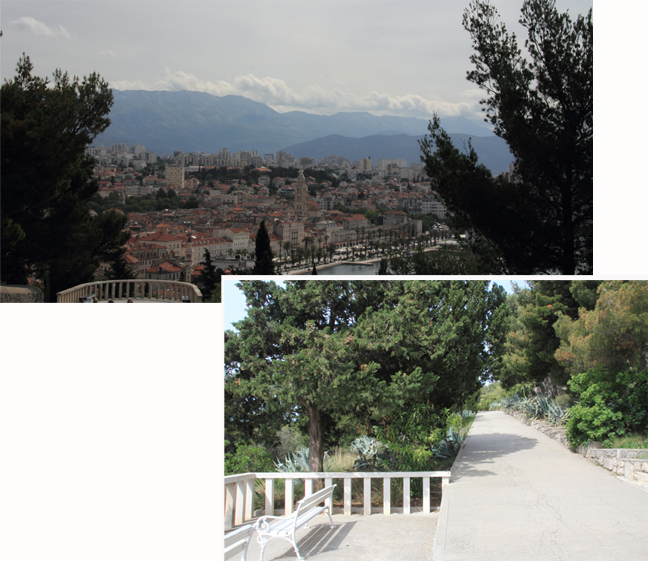 This park was created as the recreational space for the 80,000 to 10,000 people of Emperor Diocletian’s time. Which meant this park existed as early as the 3rd Century. From Vidilica Cafe onward the trail was on a gentle slope with proper paving. There were resting benches at intervals overlooking scenic views.

The Chapel Saint Nicholas was the first chapel we encountered on the trail. It was just after a high view point on the south eastern slope of Marjan. This simple chapel had the same name as a more complex church in town called Saint Nicholas Church. This small chapel was built in the 13th century dedicated to St. Nicholas (Sv. Nikole), a favourite saint of fishermen of which there were many in Split.

The trail brought us to several view points that looked out to sea lying south of the hill. After a while the walk got a bit of tiresome, it was a long path and the sun was getting hot. We started at 10 am and by 11 am we found ourselves stripping down to our t-shirts. Our target was Bene Beach which was 6 km from our apartment but after 1 hour of walking we were still not half way done. 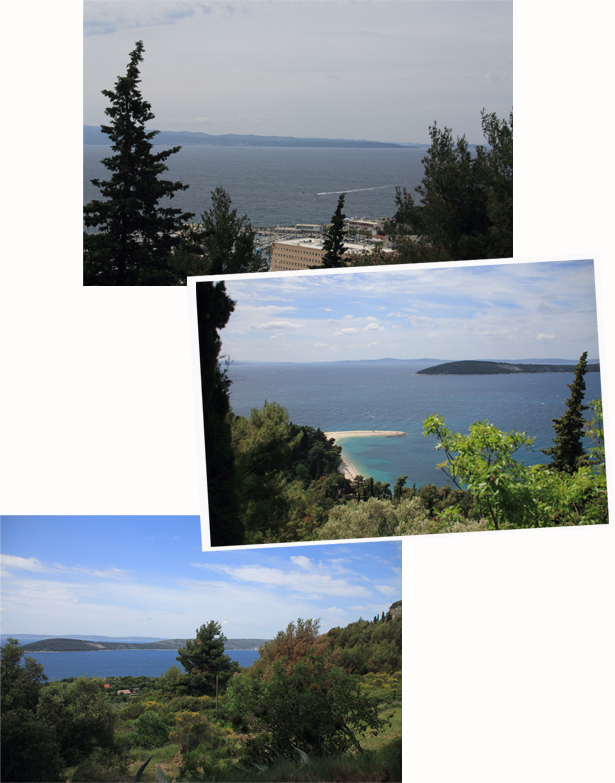 We saw some people riding on bikes and wondered where they rented the bikes. Biking would be a faster and easier way to explore Marjan trail unfortunately it was too late for us to find a rental shop. The next historical building we encountered was Gospe od Betlema also called The Madonna of Bethlehem Church, this was a 14th century. After that came Church of St. Jerome(Sv. Jeronima).

Church Jerome looked pretty ordinary initially. It was just a chapel that was built beside a high cliff, but as we walked by the path that was carved into the side of the cliff we found that some caves higher up on the cliff were walled and windowed into rooms! Amazing! These were Renaissance hermitage caves built in the 15th Century 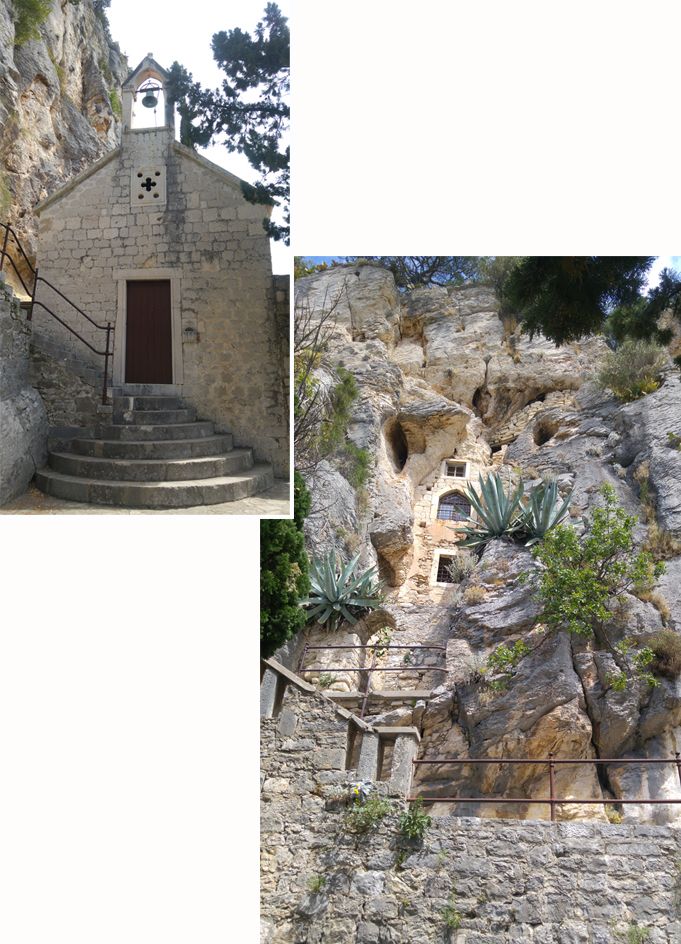 Both Gospe od Betlema and Church of Jerome were good distractions, they made us forgot about our tiredness. Just a short walk from the church we were surprised to see a rock climber scaling up the cliff. A middle age Caucasian man was midway up the vertical cliff. It was his bright red shirt that drew our attention as it contrasted clearly again the grey cliff wall.  This place seemed like a popular haunt for rock climbers as we could see many metal hooks already installed into the cliff wall for use by climbers. 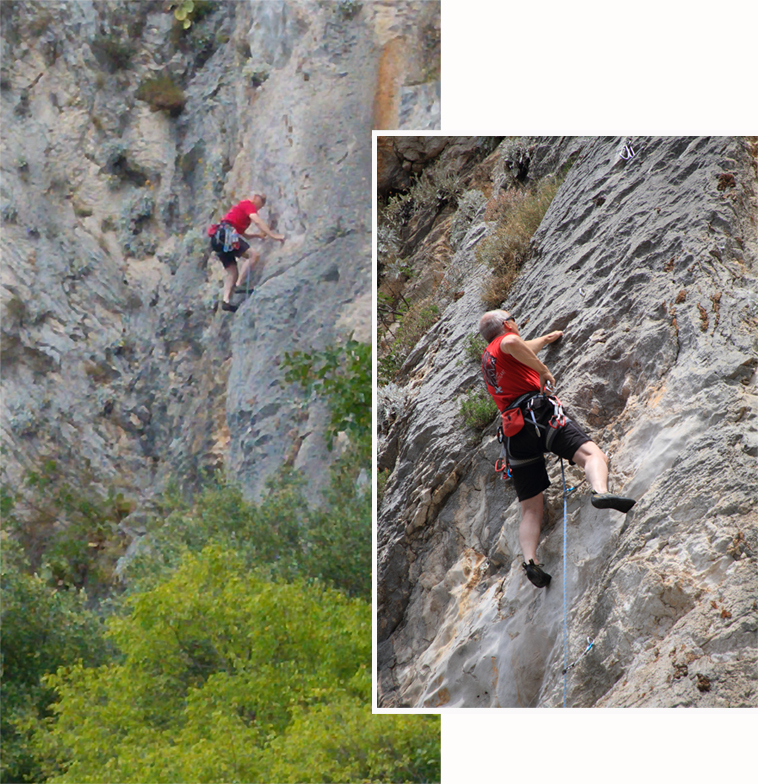 Looking at the google map, Bene Beach was just directly north of Church of Jerome, unfortunately there was no path that led north. The only path  available was one that go round the curve of the peninsula all the way to its tip before looping to the other side. Taking the loop we would need about 2.6 km to reach Bene Beach.

At 12.30 pm after two and a half hours of walking we reached Bene Beach. According to google map the trail was 5.9 km which could be walked in 1 hour and 18 minutes, which was reasonable as we could usually walked 4 km in an hour. So 5.9 km should take us no more than 1.5 hour. But we took an additional hour more! The walk was mainly  on gentle slope with some steps but that should not account for the extra time. My guess was the distance on google map was below the true distance.

Bene beach was a quiet beach, with blue sky and brilliant blue sea water. There was a cafe, Benedikt,  at the beach. It had both indoor and outdoor sitting areas. The weather was cool and yet sunny, a nice time to be outside, so we took the outdoor table. 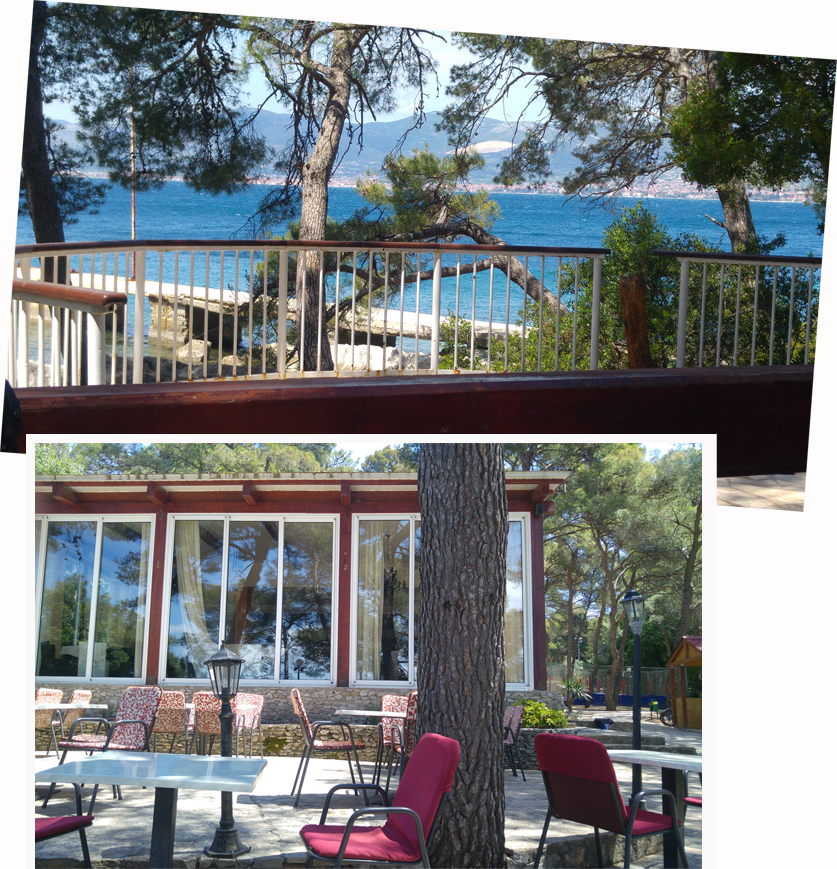 We ordered two pizzas and four cafe lattes. Pizza was the only food available at the cafe. The cost of our meal came up to 172 kuna (SGD$35.5 or €20), definitely pricier than other places in Croatia. The pizza tasted very good, thin and crispy with lots of cheese. The lattes were beautifully done with three distinct layers – white, dark brown and light brown. Yummy!!!! 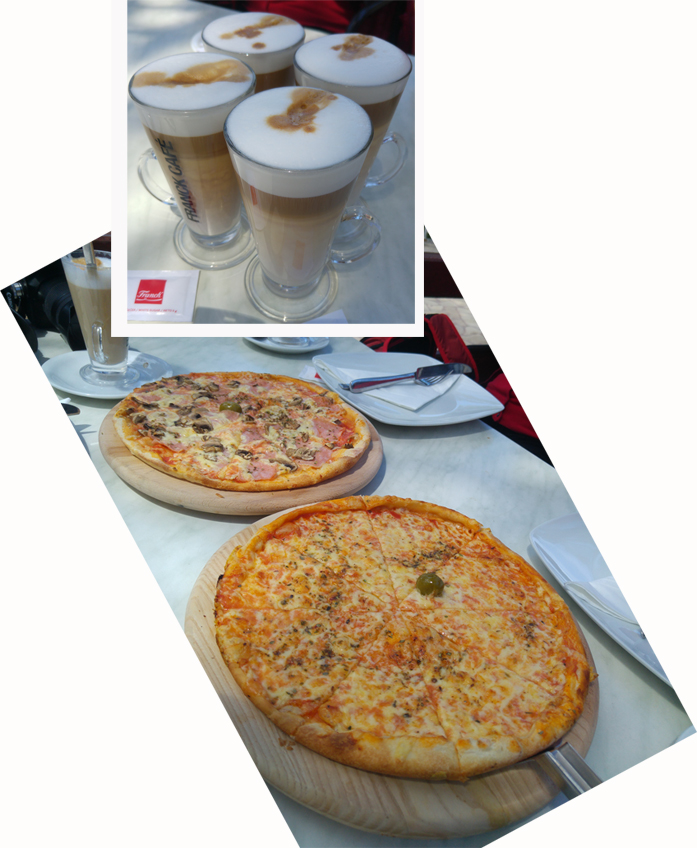 Pizza and cafe latte for lunch

We sat at Benedikt for close to two hours, too lazy to move. It had took us so long to reach here, it would only be right if we relaxed here as long. The greatest consolation was we did not have to walk back! 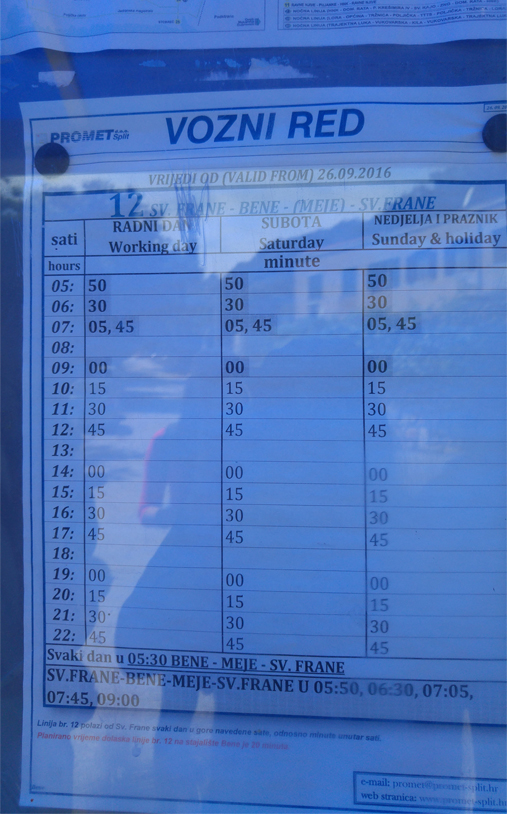 Just before turning into Bene Beach, on the main road we saw a bus stop and it had a bus schedule stuck on its wall.

The bus route was between Split Old Town near Cathedral Crkva i samostan sv. Frane to Bene Beach and back. It traveled on a road  beside the coast of the peninsula at the base of Marjan Hill.

We were so tired after walking 6 km and could not envisage the walking trip back. If we had not sighted the bus stop, I would have requested the waitress of Benedikt to book a taxis to get us back to town.

At about 3.25 pm the bus arrived at Bene Beach bus stop, we boarded it. The bus ticket was 11 kuna per person (SGD$2.20 or €1.50) and the trip took about 15 minutes before arriving at Cathedral Crkva i samostan sv. Frane which was just opposite The Riva

We had walked past Konoba Pizzeria, a restaurant that served local food, several times in these three days, on our way to and fro the old town. It looked quaint and cosy and was always packed with customers during dinner time. The place was packed should only mean the food was good — that thought flashed in our minds. This evening was dine-out-day for us, so we arrived at Pizzeria at 7 pm. It was not fully packed yet and we had no problem finding seats. 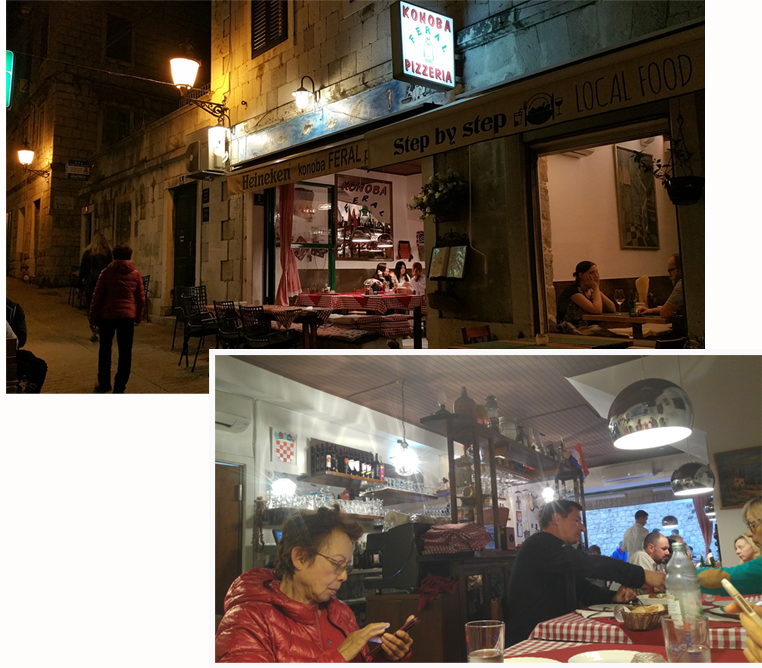 We ordered veal, chicken, seafood (prawn) risotto and salad and had a great time eating up everything on the plates. Surprising the couple at the table beside us were not happy with their food. They returned the fries saying that the fries had cooled down when served. We guessed the food was not up to their standards because after they left we saw their plates relatively untouched.

Our meals came up to 379 kuna (SGD$76 or €51), less expensive as compared to the amount we had to pay if we ate the same meals in Singapore but definitely more expensive when compared to other parts of Croatia. 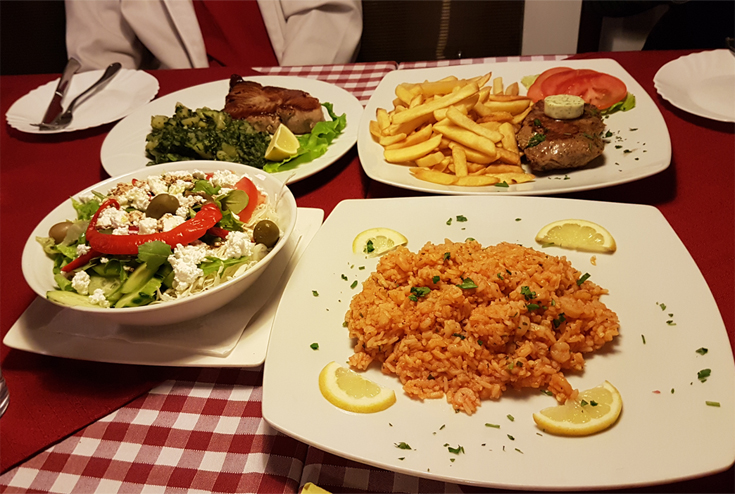 After dinner we headed out to Diocletian’s Quarter. We were at the Peristyle for some music and coffee. Cafe LVXOR at the Peristyle was providing free life music entertainment. Two musicians sat just at the door steps of the cafe, a man playing his guitar and a woman singing. The evening atmosphere was nostaglic and romantic and it made me felt sad that we would be leaving Split the next day. 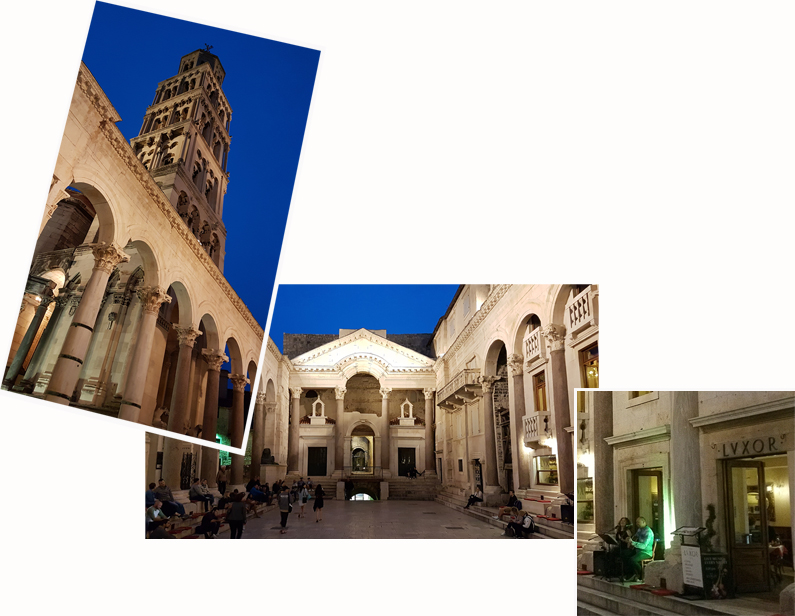 The night deepened and we left Peristyle strolling through the old town in the direction of our apartment. It was already after 9 pm but the square near Stara gradska vijećnica (a 15th century old town hall) was still very vibrant. The eateries and restaurants around the square were packed with customers.

As we moved further away from the square the crowd lessened. Though the shops on both sides of the streets were closed, the streets were still well lighted and the polished tiles on the floor reflected the lights, luminating the surrounding beautifully. 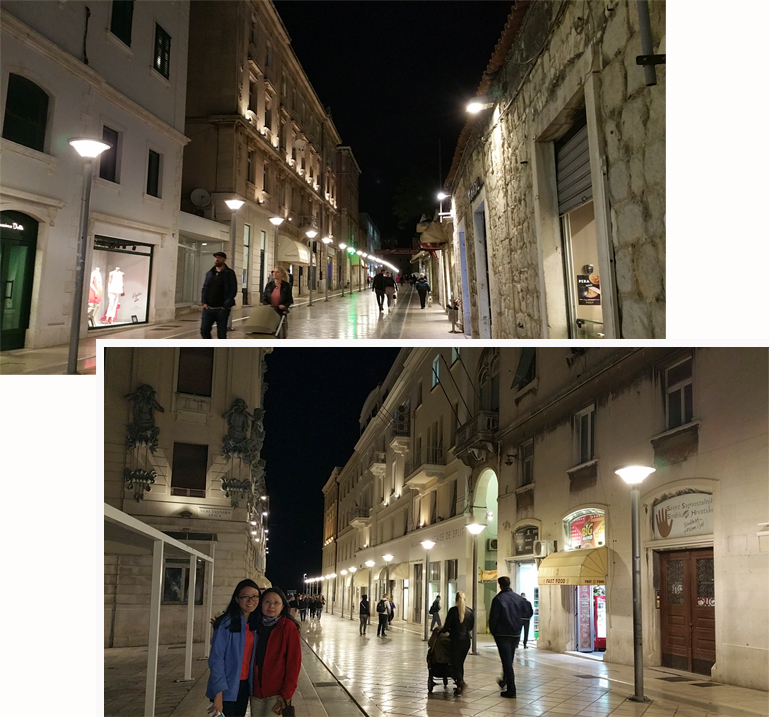 It was lovely to stroll down an old city that was so clean and bright. A city that had moved with time and still preserving it cultural heritage. An old city that  hinted to its visitors its glorious past. 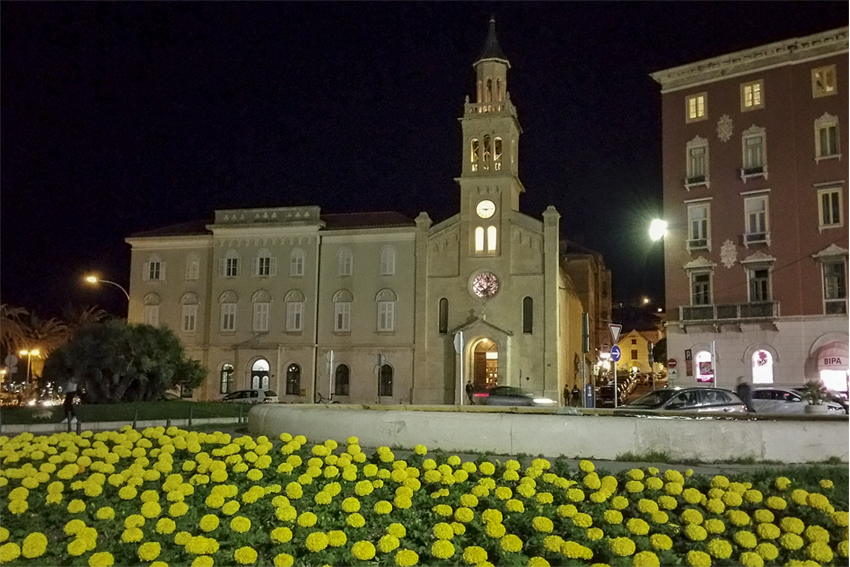