Our 20 days DIY trip focused on some very famous and stunning destinations in SiChuan. SiChuan is a southwestern province in China. It is one of the largest provinces in China with an area of 485,000 km². 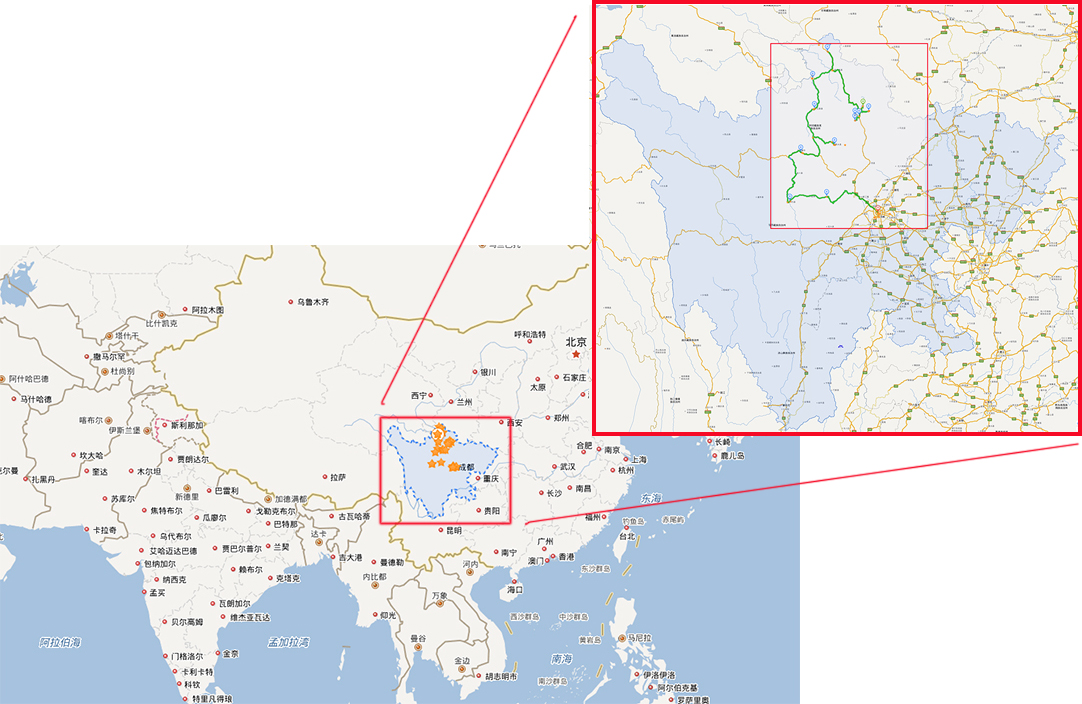 Our route through SiChuan covered about 1500 km starting at HuangLong and ending at ChengDu. 20 days though may sound like a long time, but SiChuan is huge and we only managed to cover a small section of SiChuan. 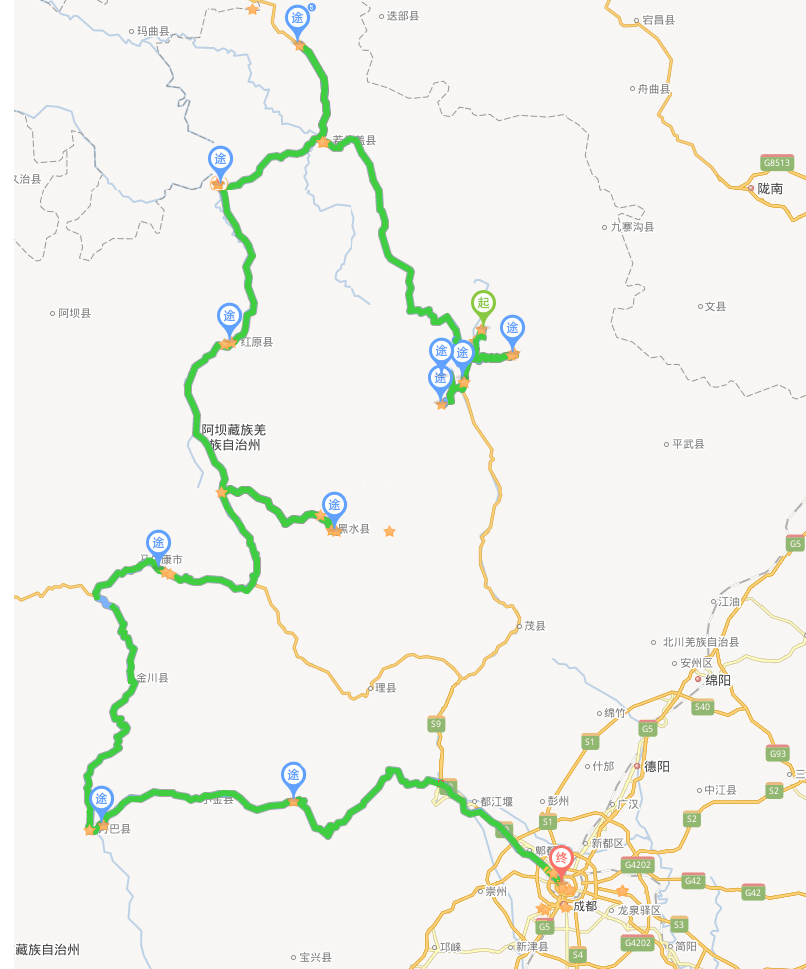 Places we visited in sichuan

Our itinerary was planned in July 2017 and our air tickets was bought soon after that. Then on the 8th August 2017 earthquake struck SiChuan and one of our “must see” destinations, JiuZhaiGou in SiChuan was destroyed. All access to JiuZhaiGou was cut off and tourism to JiuZhaiGou would take many years to resume after the reconstruction of destroyed roads etc.

Rather than cancelled our trip we just dropped “JiuZhaiGou” from our list of sightseeing destinations. So the places that we eventually visited are :

Renting a car to do our own driving in China was not an option as China did not recognize international driving license or any other documentation that was issued outside Chinese territory. Getting a Chinese Driving License was also not an option as such license was only issued to foreigner that had a valid resident permit in China.

Without our own car we had to depend on long distance public buses, taxis and unlicensed car services to get to all our destinations. Travelling by long distance buses though was cheaper the journey was extremely slow and tedious taking many hours. Long distance by taxis was too costly, charging easily RMB ¥400 to 600 and most taxis drivers did not want to make the long trip. As for unlicensed car services they were plentiful, at times we had to hire the entire car because the route was not popular at other times we opted for car sharing.

The public bus (long distance) network was more advance than our expectation. There were proper bus terminals in the larger towns and bus stops in the smaller towns. During our planning stage we relied on Ctrip-bus online website to map our travelling routes. Unfortunately many of these bus routes were not displayed on the website. It was only when we were on location that we realised these bus routes existed. Similarly each bus service on the website showed only start and end and no intermediate stops so it was difficult to know it the bus would pass by some of the smaller towns we wanted to visit until we were there.

Car sharing services were usually unlicensed services. Using them were unavoidable because many small towns just did not have taxis/cab services. Chartering the entire car would be too costly especially for long distance trip, so sharing was a mean of lowering the fare. Some of the advantages of car sharing over public bus was its timing flexibility and speed. Luckily it was the driver’s responsibility to find the other passengers to share the car. Sometimes car-sharing fare could even be cheaper than public bus fare, this was because bus ticket fare was based on start-to-end-of-route fare even when the passenger traveled on portion of the route.

Car-sharing vehicles were usually 8 seaters mpv, so beside the driver, it could carry 7 other passengers. These vehicles  were usually not in the best condition. The 2nd row middle seat was most uncomfortable, and three adults in the 3rd row left little room for the legs. The best seat was the passenger seat next to the driver.

The worst situation was when we encountered another passenger puffing his cigarette.  I tried coughing discreetly to waving the smoke away from my face and covering my nose but that smoker was immuned to all my hints.  Smoking in a confine space seemed to be an acceptable norm in China. Non smoking locals also seemed to take in the cigarette smoke naturally without showing displeasure.

We used several taxis services for short distance (2 – 3 km) trip. Only once did the driver agreed to use the taxis meter. The other taxis driver preferred to quote us a price than to run the taxis meter. It was a good thing that we knew the distance to our destinations and was able to negotiate for a reasonable amount.

At HuangLong and SongPan we had a taxis driver that took us around for three days, he also preferred to quote us an fix amount for each of the three trips than to run his meter. It was a win win situation as he got three days of business confirmed at one go and we got to negotiate for a better pricing on a three trips package.

We missed the freedom of travelling in our own Car

We found that travelling by long distance buses had many limitations. Especially between two outlying towns/villages. These  outlying rural towns and villages were usually connected to major towns by long distance buses. To travel between two outlying towns/villages  two bus trips would be required. One from the first outlying town/village to a major town and another bus trip from the major town to the 2nd outlying town/village the NEXT DAY. A night stay between the two trips was needed because the frequency of these trips was usually once a day and connecting the two trips within the same day was almost impossible.

Without our own car our timing were dictated by the bus schedule. We had to make unnecessary stops at major towns and stayed a night. At each of our destination we always had to check into our hotel, leave our luggage before we could go out sightseeing.

On the bus ride we were unable to stop whenever we saw some interesting sights or whenever we needed to stretch our legs to refresh. The journey became a tiring and tedious trip. The driver made many stops to collect and deliver packages which lengthened the bus journey. In China it seemed to be a policy for all drivers to horn twice at every road curves, humans and animals on the road and all oncoming vehicles. So throughout the bus or car journey we were constantly bombarded by the blasting of air horns that numbed our hearing.

Would we do another China DIY Trip

Though we enjoyed the many beautiful sights in Sichuan China we felt the entire experience would have been more enjoyable if we have the freedom of driving around with our own rental car. An alternative would be to engage a full time driver to travel with us but that would be too costly unless we could share the cost with more travelling companions using the same itinerary.

With the above thoughts in our minds the first reaction after returning from the 20 days SiChuan trip was I would not want to do another DIY trip till China allowed foreigners to rent cars or we could get more travelling companions to share the cost of a personal driver.

But after a few weeks and after going through all the scenic photographs, I changed my mind. Yes I am ready to go for another China DIY trip! China have came a long way from when I first visited it in 2006. Its toilet facilities had improved greatly, its public transportation have also improved many folds and the locals were nice and patient. So we will not wait and definitely will be planning another scenic trip to another part of China.

All in we spent about SGD$4,500 for the two of us for the entire 20 day trips.  The breakdown are as below:

Our trip was pretty smooth going and one of the major reasons was because I could speak Mandarin and read some of Chinese words. Other factors were planning our China trip using several “Chinese” software applications.