On the way to Lake St Clair

It was an 1 hour and 45 min drive from Maydena to Lake St Clair Lodge where we stayed one night. The distance travelled was only a mere 141 km and yet we were not going further as we thought Lake St Clair was too beautiful not to stay a night by the lake!

On the way to Lake St Clair we passed though very lovely landscape and just before we crossed the bridge over Meadow Bank Lake the stunning scenery across the lake caught our attention.

There was a camp ground just before the lake. It looked over the lake and the green hills beyond. It would certainly be lovely to camp here and wake up to such lovely sight in the morning! 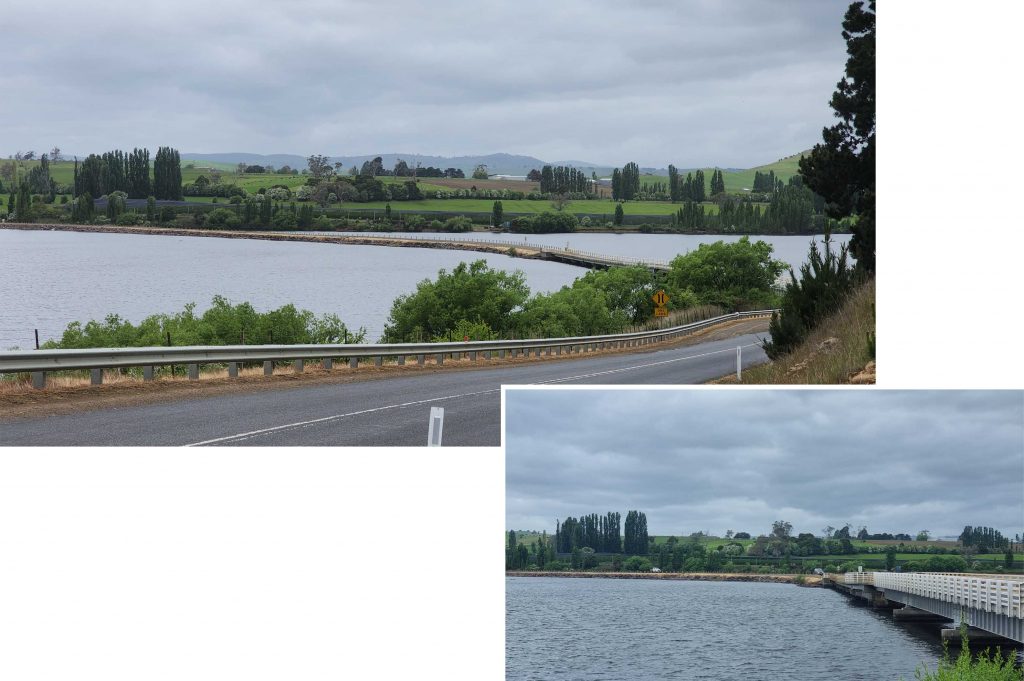 Lake St Clair and Around

Once we reached the Lake St Clair we drove out to pumhouse point to see the lake and its famous pumphouse. This pumphouse sat far out from the shore into Lake St Clair. It once housed state-of-the-art facility that pump water from Lake St Clair into the nearby St Clair Lagoon where it would be stored and fed to the nearby Tarraleah Power Station. However, the need to use the facility failed to arise and the site was eventually decommissioned in the early 90s and was only switched on for routine maintenance.

Today the pumphouse was converted into a lovely hotel. We would love to stay at the hotel but decided against it as there was a requirement of minimum of two night stay on weekdays and three night stay for weekend. It costed about AUD$800 a night with two meals provided. 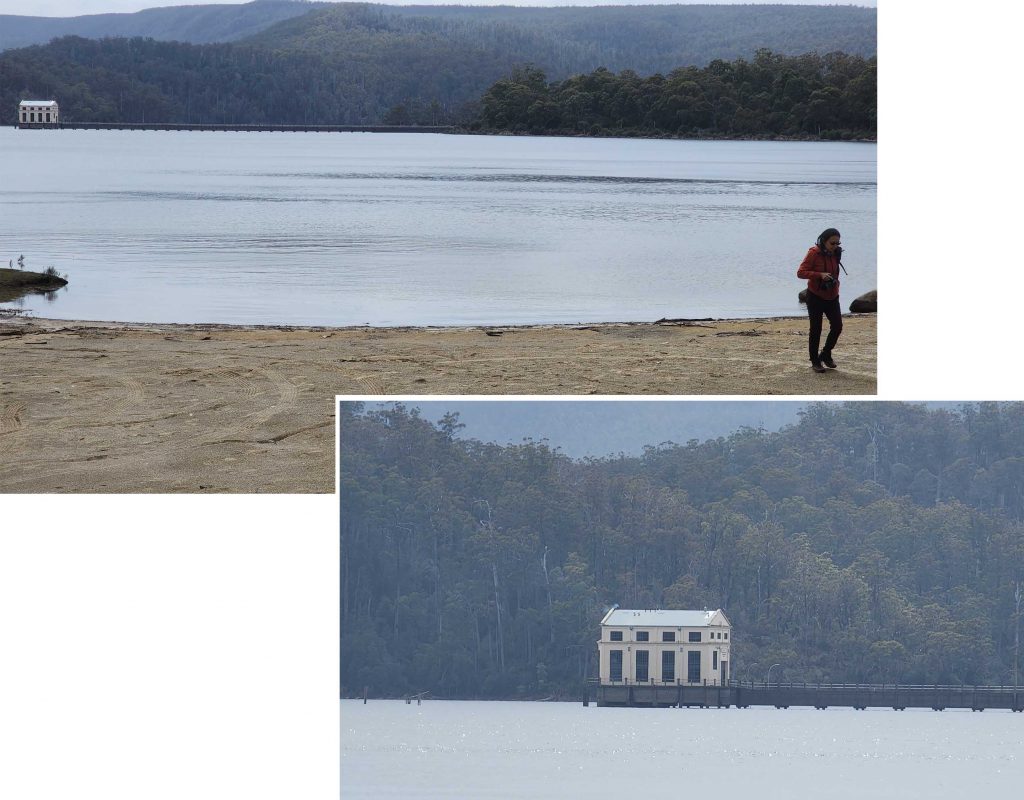 The scenery would have been more captivating if the day was more sunny, neverthless still beautiful. We wanted to see the pumphouse up close but we found the road leading to the bridge which that connect the pumphouse to the shore barricaded. Only guests of the pumphouse were allowed through. 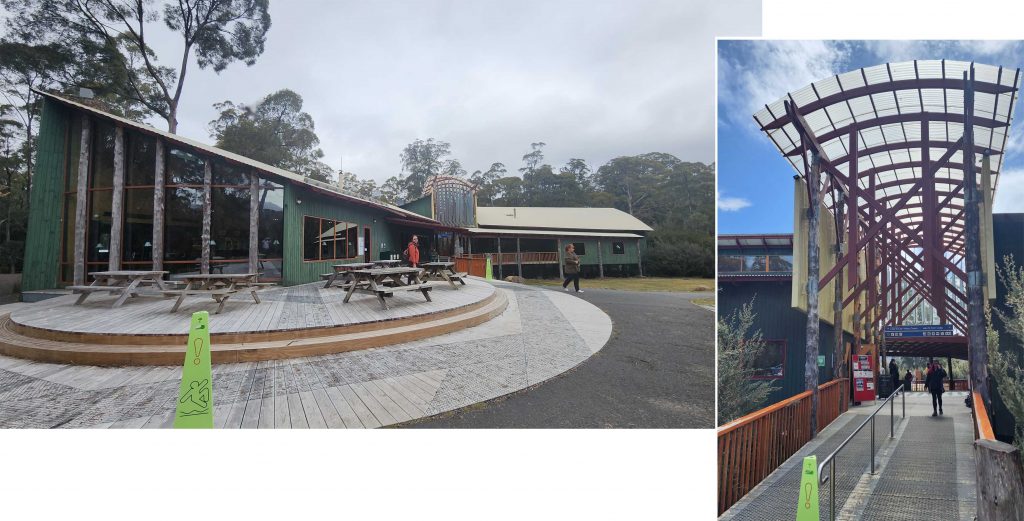 We went into the lodge side to register our arrival as we had booked a  studio cabin at the lodge. After the registration we walked over to the visitor center which house some exhibits. There it was clearly stated that Lake St Clair sat on National Park land and entry pass was needed for all visitors. Good thing that we already purchased the pass. 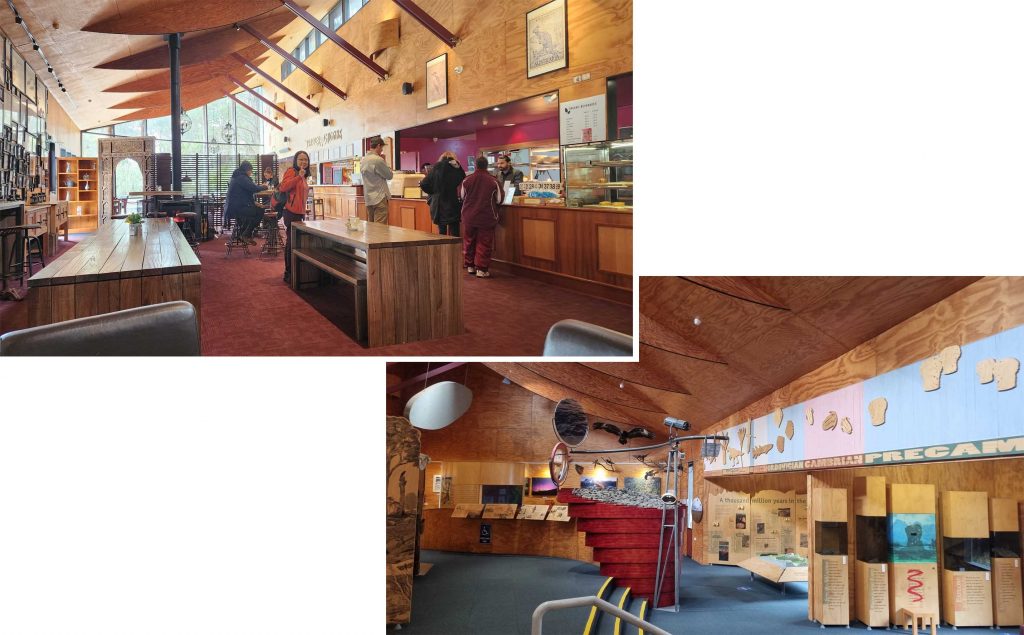 One side was the lodge the other was the visitor center

The lodge reception was also a cafeteria. Time for coffee break! While having coffee we checked out the menu for dinner but decided not to eat dinner at the lodge as we would be eating our breakfast here the next morning. Too many times at the same place would be BORING. 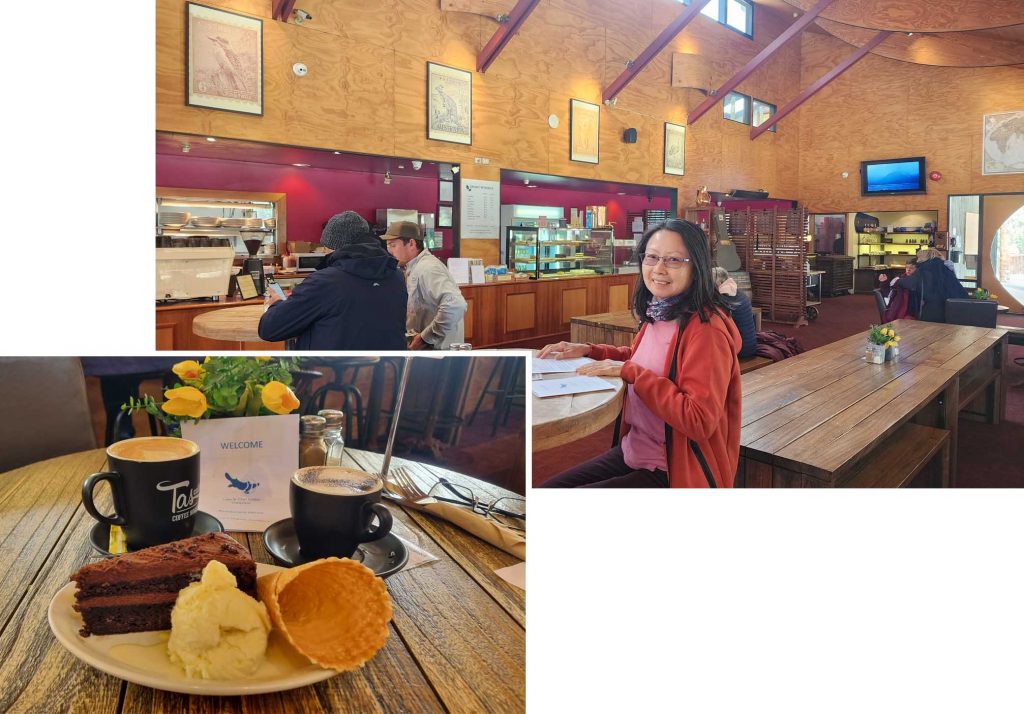 After we checked into our Studio Cabin we took a short walk down the beach.  Turn right would lead us to Frankland Beaches and left to Lodge St Clair Lodge Reception. There did not seem to be a “good”  path on the right so we turned left.

We passed an empty boat next to the boat ramp. Probably ones could sign up for a boat trip round the lake in the morning. 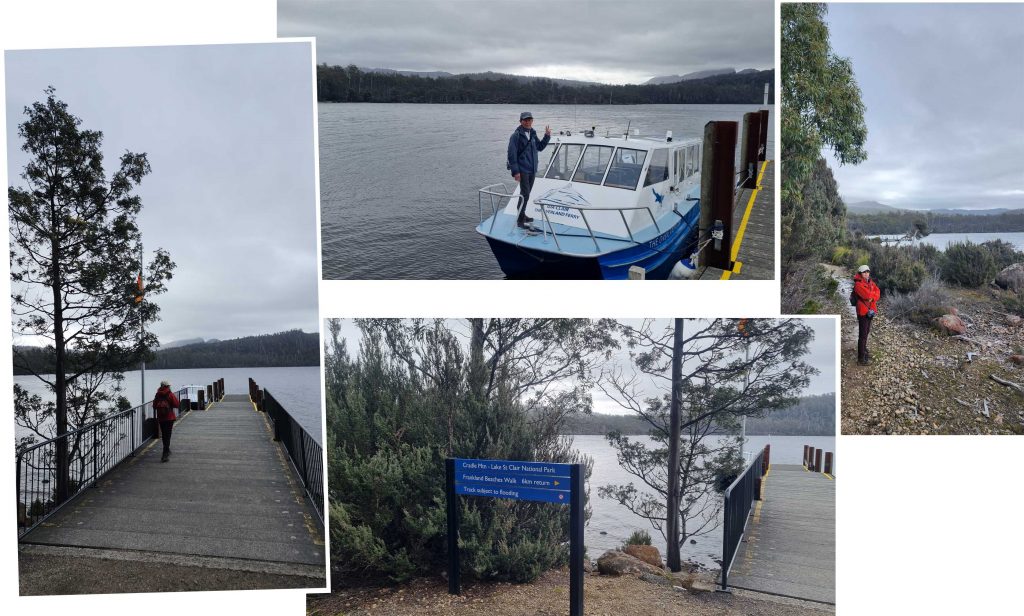 There was no beach to laze around. At some parts we could walk down to the water-line but at times we had to return to the pathway which ran parallel to the shore. 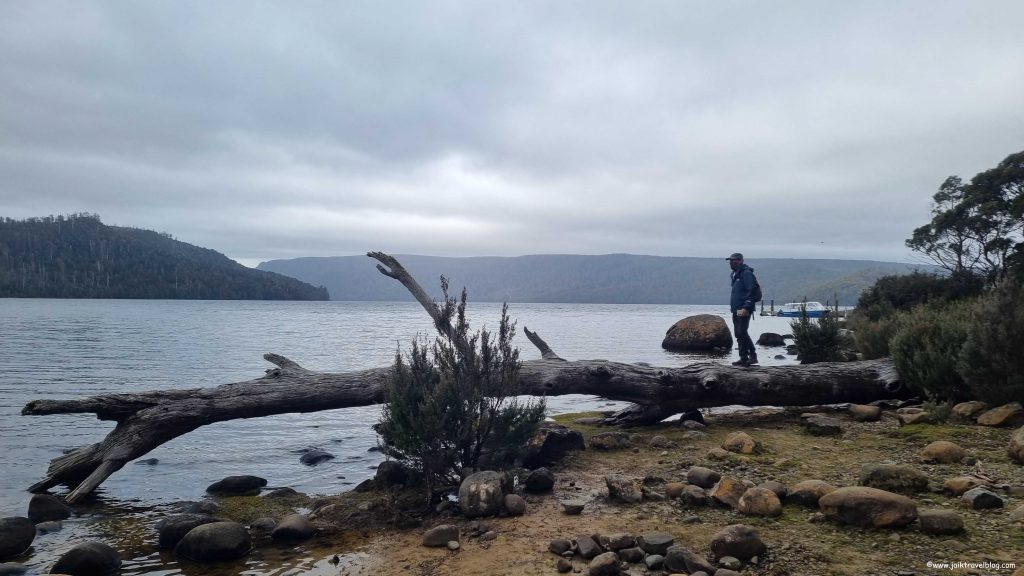 We drove a short distance (6 km) to Derwent Bridge for dinner. The area was called Dervent Bridge but there was no bridge to be seen. At the location was “Dervent Bridge Wilderness Hotel” a quaint large hotel which also had a restaurant. 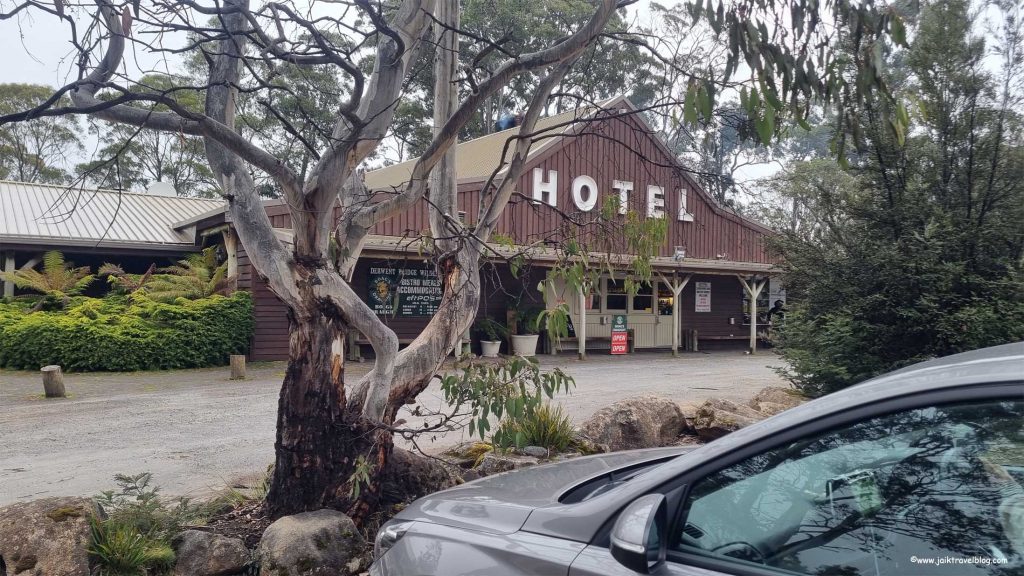 We read more good reviews than bad concerning the food served a the restaurant. So we decided to take some risk and had our dinner here. The interior of the hotel/restaurant was very “woodish” and very antiquate. We were too early and dinner started at 6.30pm 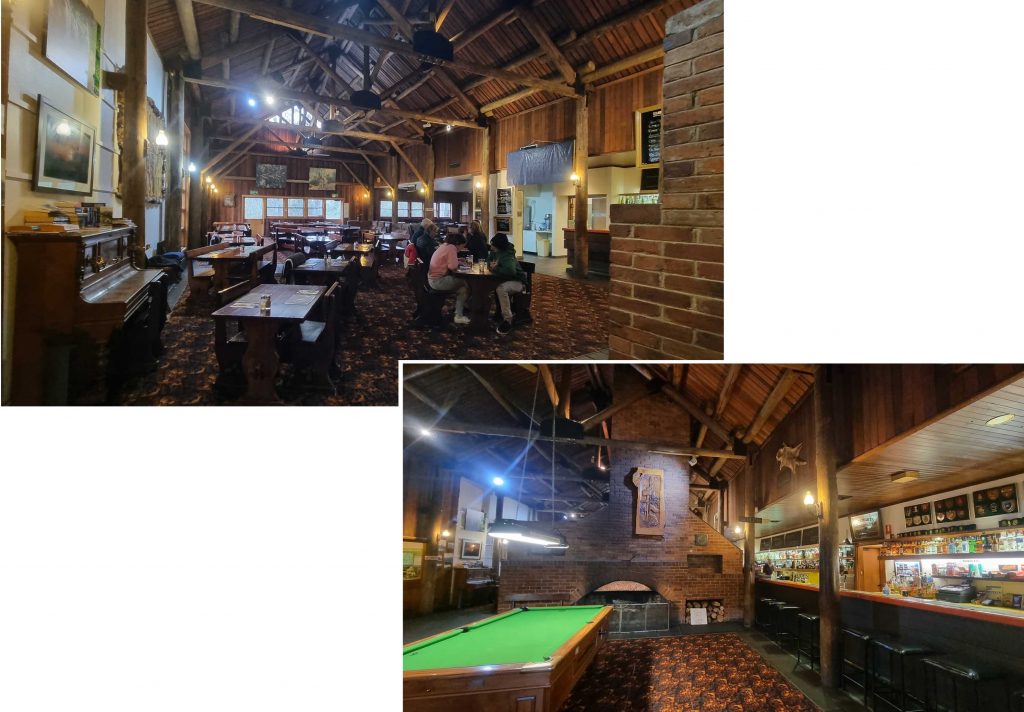 The restaurant also had a bar and billard table for its patrons. It also housed rooms with shared bathrooms. We did consider staying at Dervent Bridge Wilderness Hotel but did not as we wanted to stay at Lake St Clair Lodge which was just by the lake. The purpose was to enjoy beautiful sunrise/sunset by the lake. 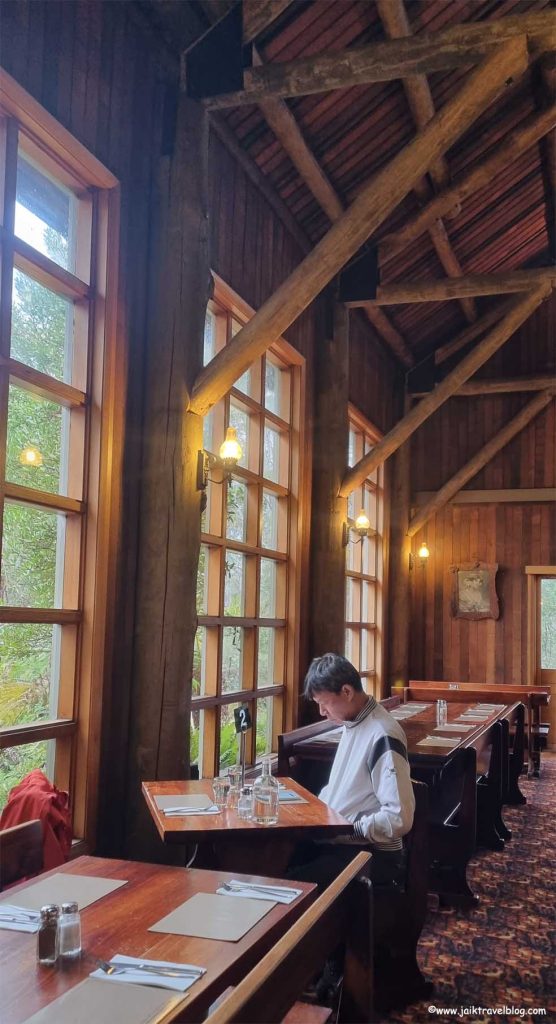 Deciding what was for dinner

We had one chicken parmagiana to share between two of us. The serving was enough for two of us since we were small eaters. 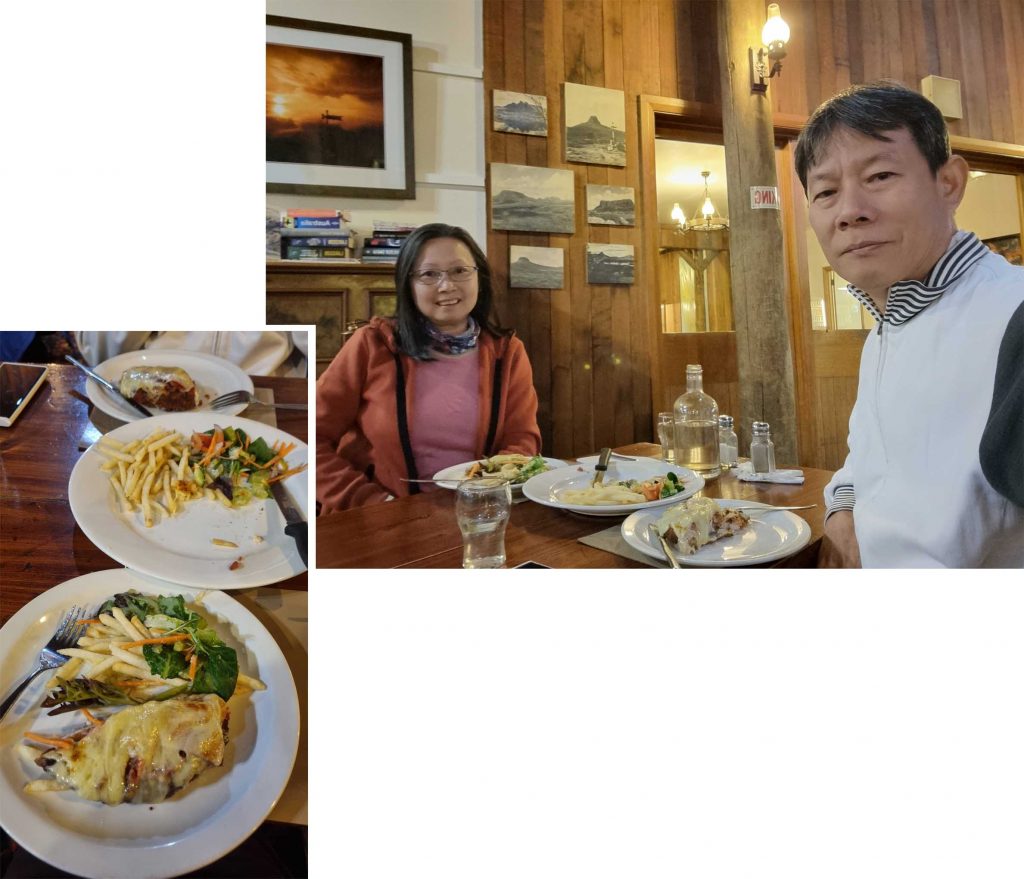 Our Stay at Lake St Clair

Our stay was a Studio Cabin at Lake St Clair lodge. It cost AUD$325 a night with breakfast included. There were other cheaper accommodation at Lake St Clair Lodge such as chalet for two at “Drumlin Bunk House” which cost half the price. This cheaper version had no ensuite toilet but have common kitchen and dining facilties. 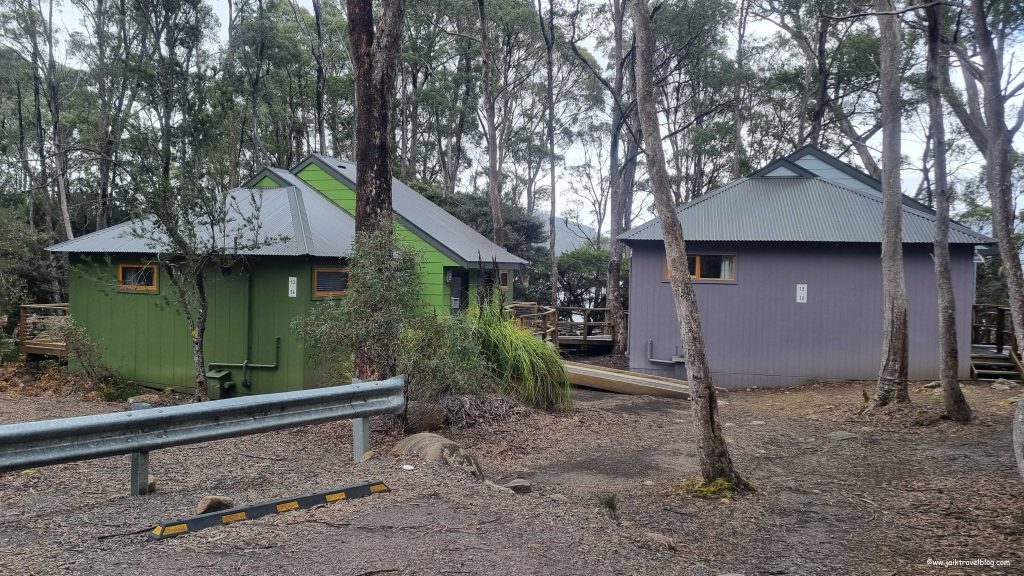 The studio cabin though was expensive was so much more comfortable than the bunk house. We had read some bad reviews concerning the cleanliness of the bunk house so it was a no-no for us.

The studio cabin would have been great if it came with a kitchenette. Anyway without cooking facility the “chef” for this roadtrip took a nice break! 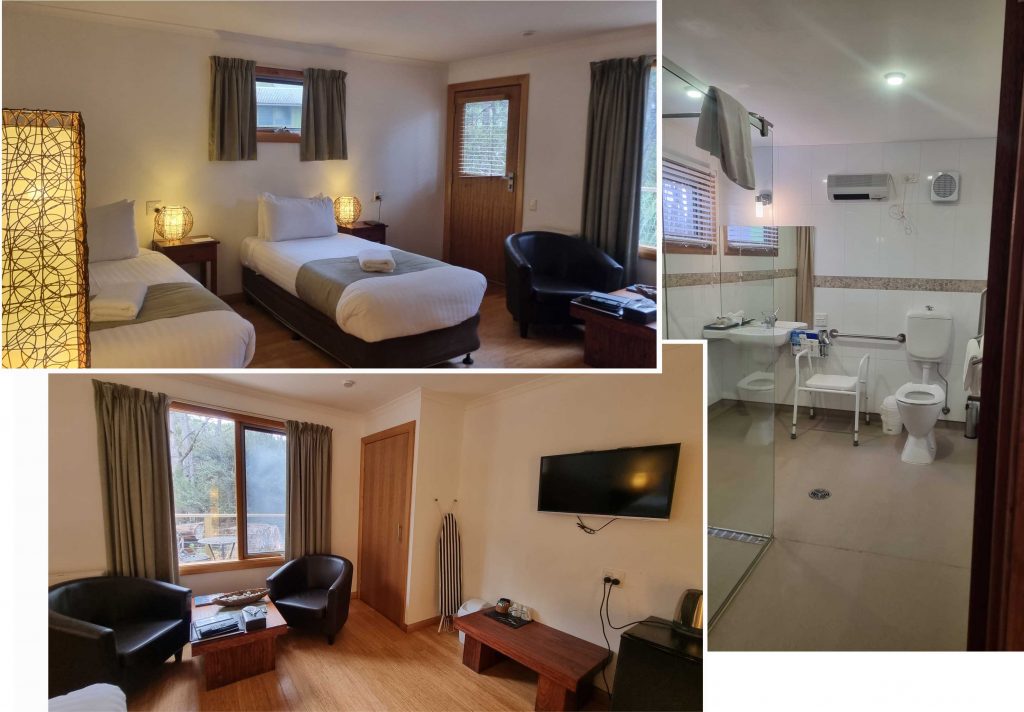 Breakfast the next day

Breakfast was eaten at the Lodge reception/restaurant. Surprisingly there were many guests. We certainly did not see any souls when we were walking around our the vicinity of our cabin and thought we were the only guests.

For breakfast we had toast, egg, bacons, beans, coffee and cuppacinno. A great start to another great day!! 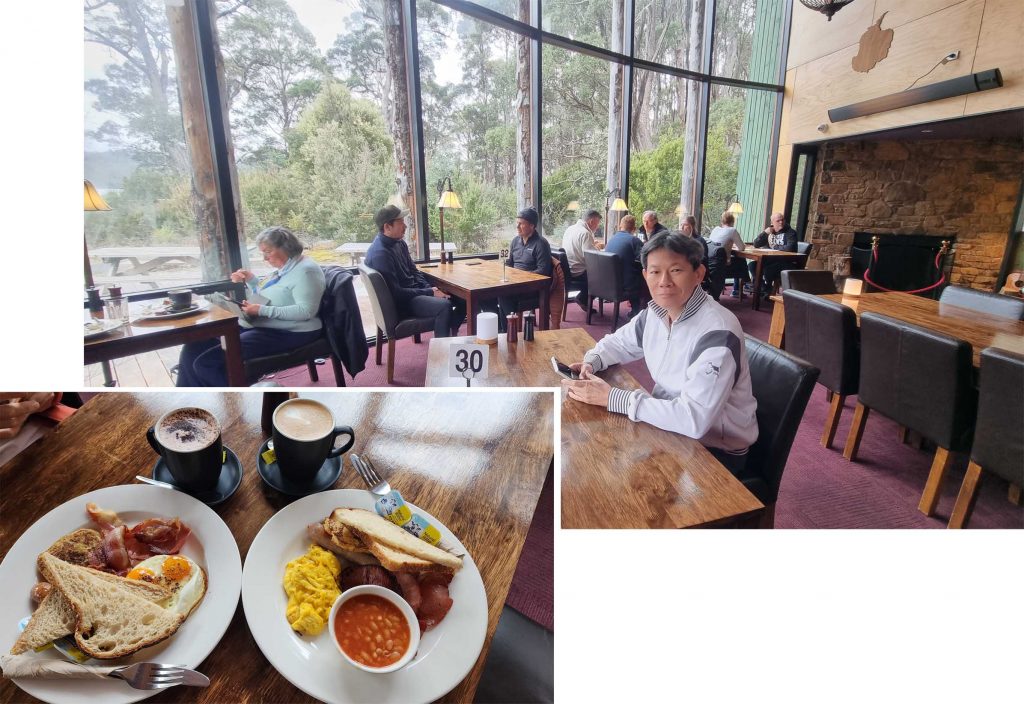