Yesterday we had completed Mykonos Town and a west part of Mykonos Island. Today our plan was to explore an inland village, Ano Mera, a couple of beaches, Armenistis Lighthouse in the North and sunset over Mykonos Town on the side of the old port.

Breakfast with a view of the Aegean Sea

Breakfast with a view

We had our breakfast at the hotel dining room. It had a wonderful view of the Aegean Sea and Mykonos town. Akrotiraki Hotel was on higher ground so from the dining room we could see very far. Breakfast was simple with bread, cereals, salad, fruits, coffee, and tea. Since we had done the major sights of Mykonos the day before we could afford to go slow today. 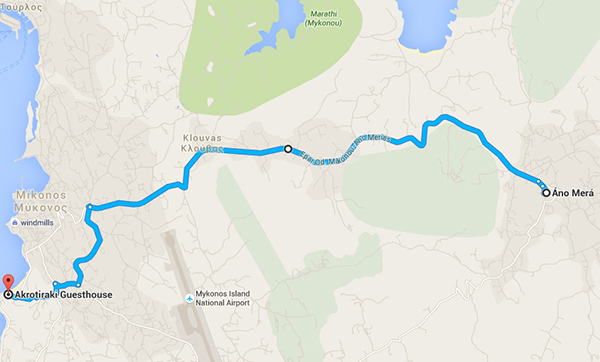 We drove for about 8 km taking about 25 minutes to the only inland settlement of Mykonos, Ano Mera. Along the way we passed very dry terrain that looked so different from the Mykonos that we had seen the day before. The ground looked very harsh, with uneven dry and bare rocks and hardly any vegetation. This was a sight not seen by the many tourists that came to Mykonos as many did not venture inland.

Ano Mera was a village with a few scattered settlements, it was the second largest village after Mykonos Town village and was the oldest village on Mykonos.

When we were near Ano Mera we could see the red dome of the monastery, Panagia Tourliani from the main road. The monastery was behind a row of high wall, we turned off the main road and came to a car park. The car park was just next to the village square. 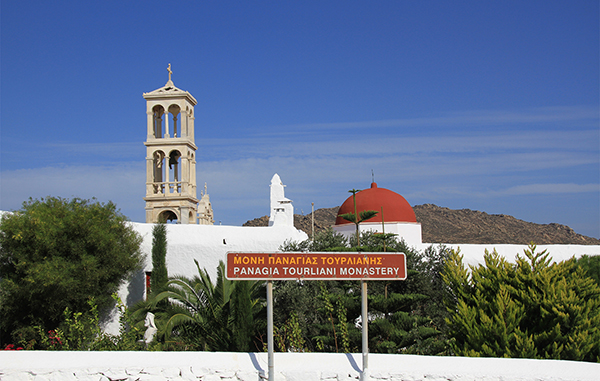 At the village square there were a few shops selling souvenirs, there were a couple of cafes and restaurants. The whole place was rather quiet and it seemed like not many tourists ventured out here. Looking around we did not see anything interesting so we headed straight to  the monastery.

The monastery was founded in 1542 by monks of the monastery of Katapoliani of Paros, on the site that earlier was the church of “Eisodia tis Panaghias”. In 1767, the monastery was restored assuming its present look. It was quite pretty and different from those that we saw in Mykonos town. It had a high bell tower and its facade was tiled with marble slabs.

While I was in a store at Ano Mera buying an ice cream I chatted with a lady who was the store owner. I was finding out if there were any interesting attractions nearby. The store owner recommended Elia beach as a great local attraction that we must visit. We drove south for about 5 km and reached Elia beach in less than 10 minutes. 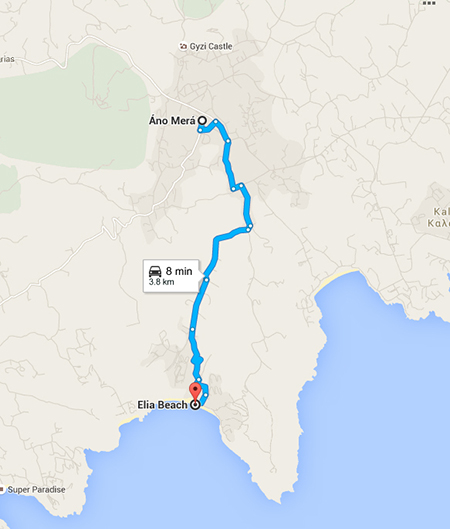 Elia beach was definitely a tourist beach, it was a bay. We saw rows and rows of sunbath chairs and beach umbrellas for rental. Though the tourist peak season was over, there were still many tourists on the beach and in the water.

I felt that early October must surely be the best time to be in Mykonos, the crazy crowd was over, the weather was still good for swimming and best of all everything was cheaper. 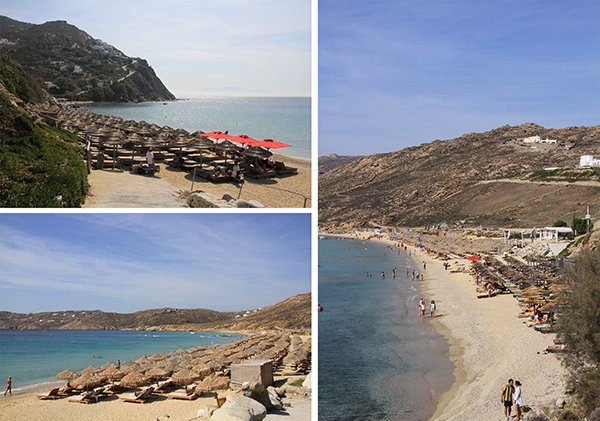 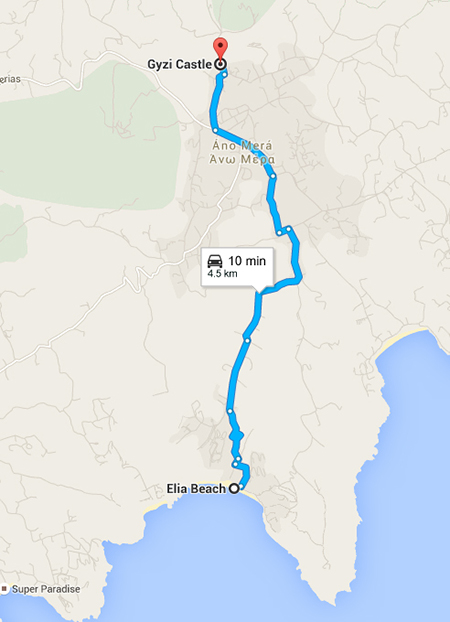 I was checking the paper map that the Avis Car Rental Office had given me and saw an attraction “Gyzi Castle” marked on the map near the north edge of Ano Mera Village, so we decided to visit Gyzi Castle before proceeding to Armenistis Lighthouse.

Following the direction we drove on and the road went uphill. When we were near the location we kept looking out for a castle but could not find one so we kept driving forward in search of the “missing castle”.

After a while we decided to backtrack and concluded that the long stretch of rocks along the road was actually the ruin of the castle wall, the castle that were further uphill from the “wall” was just a bigger pile of rocks. Well we found our castle. 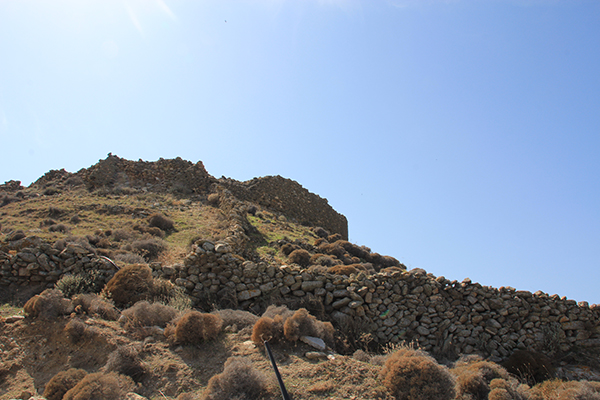 Searching through the internet I learnt that Gyzi castle was built in the 13th century during the rule of the Gyzi family, a noble Venetian family that was ruling the Cyclades in the Medieval times.

From Gyzi Castle to Armenistis Lighthouse was about 12 km, on the way there we made a detour to Mykonou Marathi (Reservoir). We followed the google map driving on the road that would border around the reservoir. 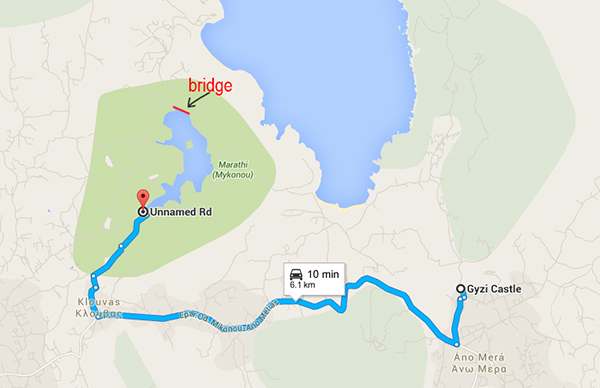 Unfortunately we just could not find the reservoir. I was wondering if google map made a mistake and brought me to the wrong place until I saw a signboard stating the name of the reservoir but there was no reservoir in front of the sign. 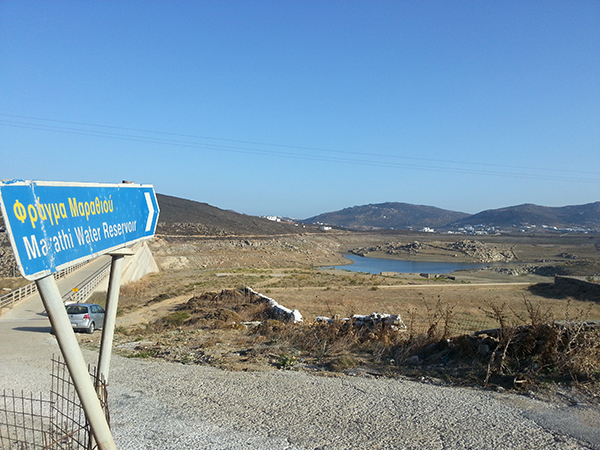 Armenistis lighthouse was located in Cape Armenistis. It was 19 meters in height and was still in operation. 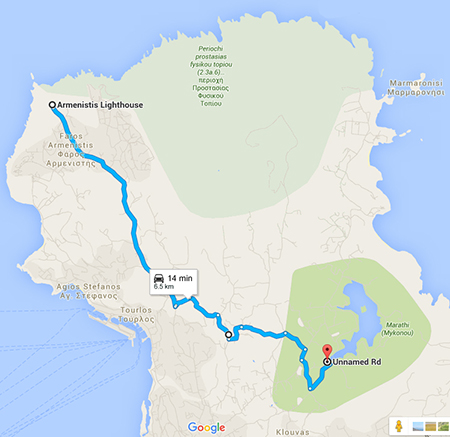 Route from reservoir to Armenistis Lighthouse

The scenery at Cape Armenistis was very captivating. It had this dream like atmosphere. From the cape we could see the mountain on the next island, Tinos. The mountain looked so near and the stretch of water between Armenistis Cape and Tinos looked so unreal.

I read that one of the best places to view sunset in Mykonos was Armenistis Cape unfortunately we planned to be somewhere else for sunset. Though we would not be seeing the sunset at the cape we still enjoyed its day scenery very much. 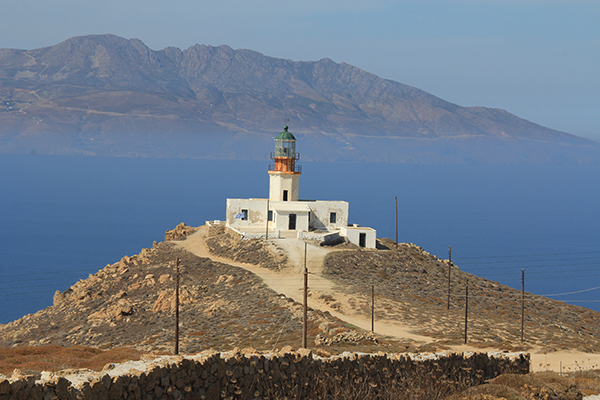 We were on our way back to Mykonos town when we stopped at Dublin Cafe for a very late lunch. We were hungry and Dublin Irish Cafe had this inviting, cosy and comfortable look that pulled us into the cafe. The beach where the cafe was located was very quiet and we were the only customers at the cafe. The food was very nice. We had pasta and salad nothing Greek.

Panoma beach was near to Mykonou Marathi reservoir, so after the reservoir we drove down to the beach. It was only a 5 minutes drive of less than 2 km.

Before the beach was the Panoma Village. There were houses, cafes and hotels but not many people around.

We wandered on the beach for a short while, then decided to head back to Mykonos Town. The beaches were beginning to look too similar, so we were not going to detour to any more new beaches again. 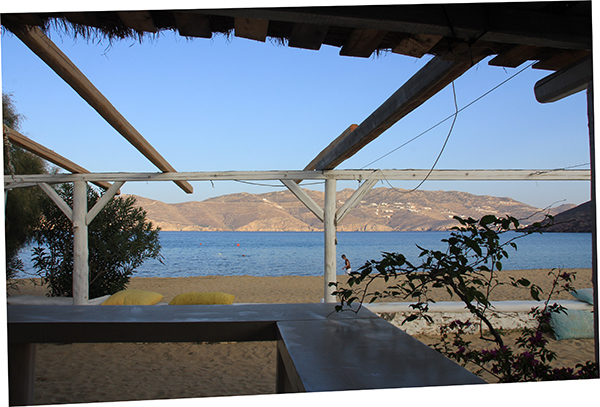 We wanted to see a sunset view over the Mykonos Town on the side of its port and for that we need to go somewhere high where we could looked down to the town. We were not too sure where we should go but since we had time we drove around looking for a suitable place to view the sunset.

We searched around and came upon an empty field on a high ground overlooking the port. The location was perfect and we just had to wait for the sun to set. It was a very beautiful sight to see the golden rays from the sun lighting up the white walls of the houses. After the sun gone down we went back to our hotel very satisfied with a full day of exploration. 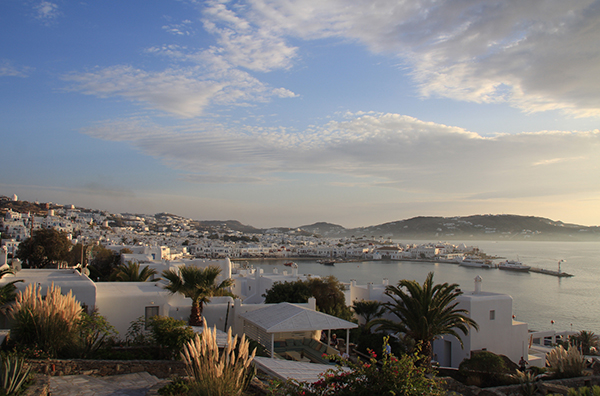 Sunset over the Port of Mykonos 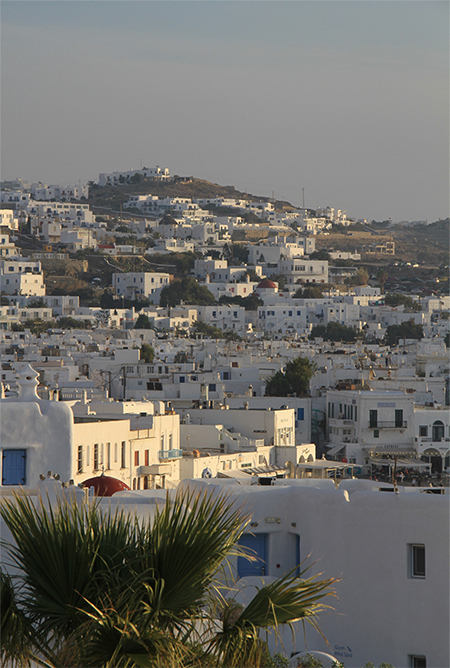 Rays from the evening sun on the Port of Mykonos