This was our last day in Santorini and we intended to visit places that were on the way to the airport and around the airport. 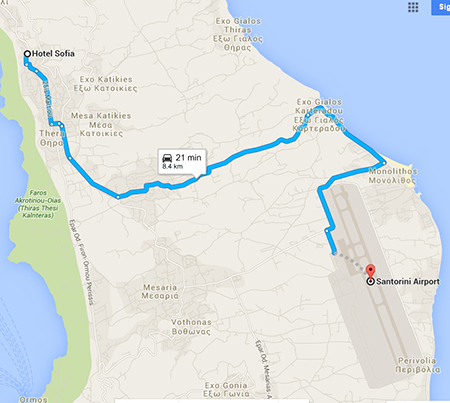 Our last destination would be the airport where we would return our car and take a flight from Santorini to Athens. At Athens International airport we would pick up a rental car and wait for the arrival of two friends before driving to our hotel for the night.

After breakfast we checked out of Sofia Hotel and packed all our luggage into the car. We drove the car to the Avis Car Rental Outlet at Fira town where the Avis staff conducted a inspection for damages and signed off the return paper. We would still continue to use the car until about 6 pm before returning the car at the Airport. There would be no Avis Staff at the airport so we would just park the car at the Avis carpark lot and leave the key under the floor mat as agreed.

We did not have any specific destinations in mind for this last day at Santorini, we just needed to be at the airport by about 6 pm. We drove into Thira and wanted to come down for a walk around town. Unfortunately it was not easy to find a carpark space near the town center and by the time we found a carpark space it was too far from the town center that we decided we might as well get out of town. 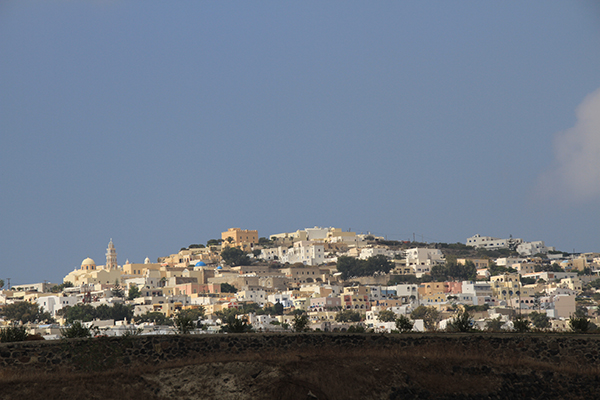 Thira as view from inland

After leaving Thira we drove inland and turned into Karterados town. Karterados was built beside a stream in a ravine in the 17th century. The original dwellings were cave houses built deep into the rock face. We saw a traditional windmill at the Karterados village square. So far most of the windmills that we had seen were painted white. This one was not all white. It looked well maintained with its fan blades still attached. 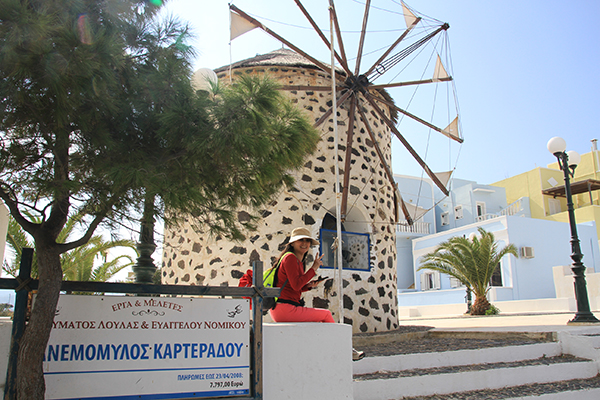 Along the way we stopped at a few churches as churches were usually the most prominent structures. From far they could be spotted by their high domes and high bell towers. 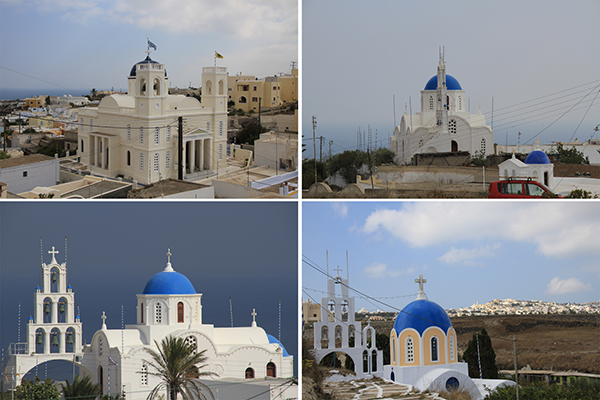 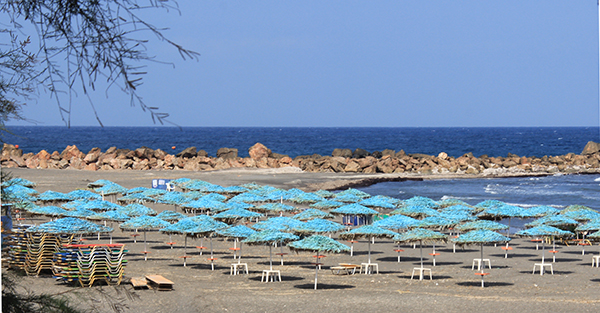 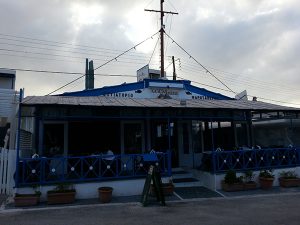 The beach was deserted with only a few people around. There were just a couple of restaurants at the beach and we went into Captain Loizos Fish Restaurant which looked like the only restaurant that was opened for lunch.

We were the only customers and we ordered a fish meal, a swordfish, on the recommendation of the waitress. I had never eaten swordfish so I wanted to give it a try. Well the swordfish tasted rather plain, nothing memorable. 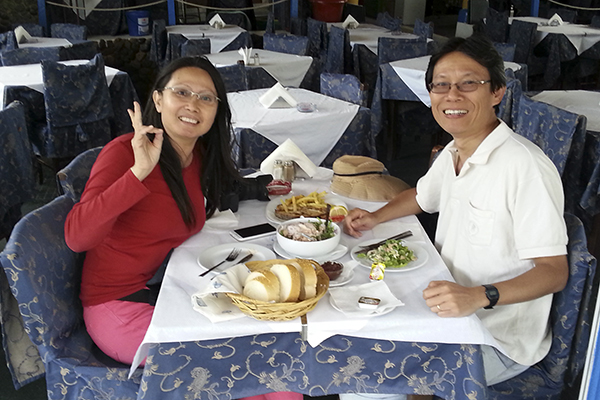 In terms of looks Monolithos beach was not as beautiful as Red Beach and Perissa Black Beach. It was a normal beach with rough waves and strong wind.

After lunch we still had about 2 hours to kill so we strolled aimlessly on the beach. There was not much to do on the beach so we ended up sitting on a chair and propped our legs on a ledge. The cool wind and the warm sun and the rhythmic motion of the waves lured us into a short nap. 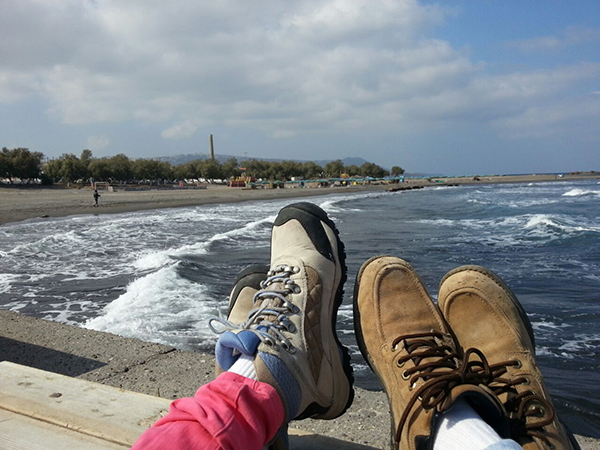 Lazing on a long chair at Monolithos Beach

Our three days had come to an end. We had a great time and three days were just nice, not too long or too short. The most memorable parts of Santorini were the caldera towns, Fira, Firostefanie, Imerovigli and Oia. All were stunning when viewed from the Caldera side. Ammoudi Bay was also very beautiful.

We were able to enjoy three wonderful sunset and three glorious sunrise views. So by the time we left Santorini we felt no regrets.

We flew out of Santorini on the 8.25 pm flight and reached Athens at about 9.10 pm. We flew on Olympic Air and the fare which included a 23 kg luggage was €135 per person. We had chosen to fly because the flight took only 45 minutes as compared to a cruise trip of at least 8 hours. 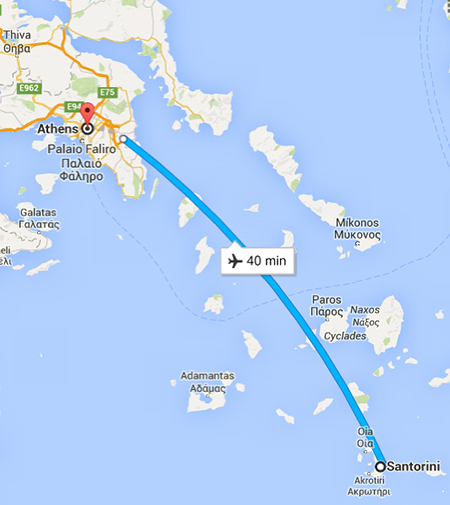 If we were to travel by ferry back to Athens we would arrive at the port around midnight and I felt that it would be too difficult to pick up a rental car and get into the town. I would have considered a ferry trip if it arrived at Athens in the morning then I would have booked a room on the ship for two and sleep our way to Athens.

Picking up a Car (Budget)

At the airport we went to the Budget Car Rental Service Counter to pick up our car which we had already reserved online two months ago. The total cost was €670 for 13 days with GPS, Collision Damage Waiver and Theft Protection Coverage. One of the most important considerations for choosing Budget was that it covered Ferry insurance so we could drive our rental car onto ferries when we visited four Ioanian islands.

My only disappointment was the GPS unit that the Budget staff handed over to us. It was a very old model with very limited functions. It would not be easy to get to the doorstep of our destinations as the GPS did not accept destination by co-ordinates. To enter the name of destination into the GPS would be very difficult for us as we were not familiar with Greek Alphabet. I always preferred to use GPS system that allowed destination selection by entering numbers be it co-ordinates, mapcodes or phone numbers as these numbers had no language barrier.

The only way we could use this old GPS would be to select our destination by using its inbuilt map which would get us to the general location, there after we would have to navigate by google maps. It was a great thing that we had 24/7 data connection.

I had booked two double rooms at Hotel Giorgio for €40 each room per night. The hotel charges covered free parking, wifi and breakfast.

One of my major considerations for picking Hotel Giorgio was its safety which I gathered from reading its customer reviews. Hotel Giorgio was located on the outskirt of Athens which was fine with us as we would not be visiting Athens.

The drive from the Airport to Hotel Giorgio was very smooth since it was already at night and for most parts of our journey we were on the highway. 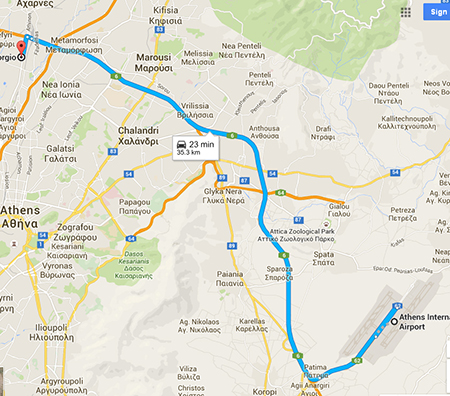 Though it was already past midnight we had no problem checking in as I had already informed the hotel of our late arrival. The carpark was just beside the hotel so there was not much to walk. Overall the hotel looked rather modern, new and clean. The room size was just comfortable.