In the morning we would drive southward from Ioannina city to Plaka Bridge which was near a village called Plaka. We intended to spend a couple of hours exploring the bridge and the surrounding area.

In the afternoon we would move northward and up the mountain to Zagori region. Our plan was to stop at Aristi Village, our first Zagori village, for lunch. From there we would drive further north to Papingo village where we would spend our night at a guesthouse.

For today and the next day we would visit four to five Zagori villages. 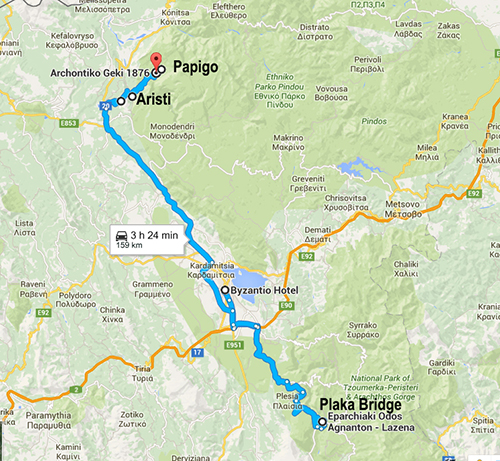 We drove 50 km in about 1 hour 10 minutes from Hotel Byzantio in Ioannina City to Plaka Bridge. 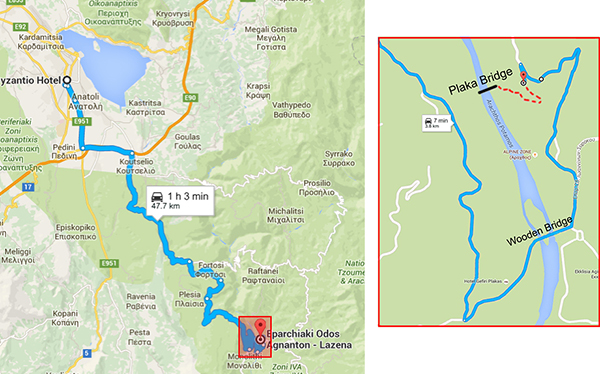 This was a 19th-century stone one-arch bridge, it was located at the borders of Arta and Ioannina prefectures over the Arachthos River. It was the widest stone-made bridge in Greece with a 40 meters width arch and about 20 meters high. The bridge was built and collapsed twice in 1860 and 1863, eventually it was rebuilt in 1866 by master builder Kostas Bekas. 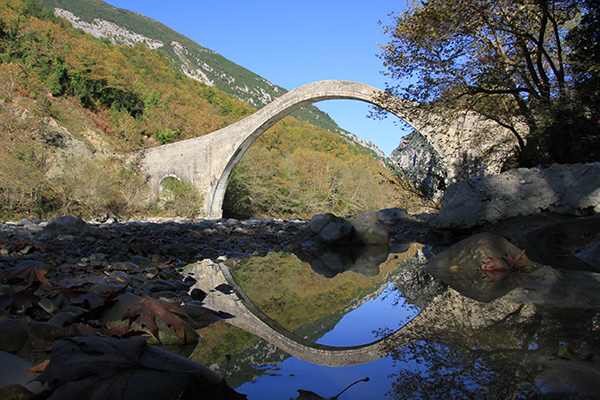 Plaka Bridge disappeared from sight when the road led inland away from the river. We drove on a windy road for about 1.5 km before we had to make an extreme left turn almost 180% onto a smaller road that led down slope. Shortly we reached the end of the road and we parked our car by the roadside. We followed a rocky path and walked a short distance downhill to the Plaka Bridge. Just before the bridge was a small cafe, where one could drink coffee and view the bridge.

The beauty of this bridge was its ruggedness, its weathered look, its immense size, and its remoteness. In a way it was a good that the river was partially dry as a visit to Plaka Bridge would not be completed if one did not get to explore the bridge at the riverbed level too.

The water level in the river was pretty low and parts of the riverbed were dry and we could see the rocks and pebbles that made up the river bed. We walked along the edge of the river and found a path that brought us down to the dried riverbed. From the level of the riverbed we felt so minute when we looked up at the gigantic Plaka Bridge. 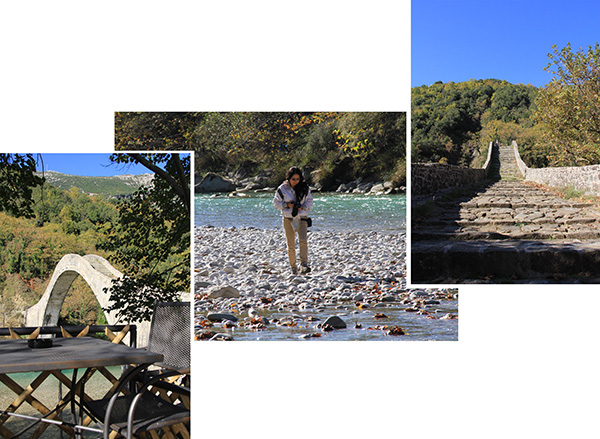 From Plaka Bridge we drove about 100 km northward to Aristi Village and it took about 2 hours of travelling. Aristi Village is one of the famous Zagori Villages of Ioannina in the Epirus Region of Greece. 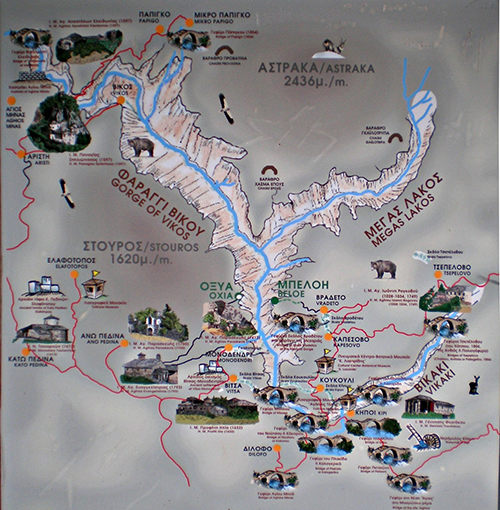 The whole region between Ioannina and the Albanian border is one to the most beautiful places in Greece. Zagori is an area of great natural beauty with towering mountains, virgin forests and impressive gorges. In the region there are a chain of 46 stone villages, superb arched stone bridges, imposing mansions built in the austere local style, lovely old churches and monasteries caved into the mountains.

By the time we reached Aristi Village it was also about lunch time. The main road led to the village center where there were a few local restaurants. We stopped by one along the main road to have our lunch. We ordered several Greek dishes which included the restaurant famous spinach pie. The lunch was fabulous and very delicious. 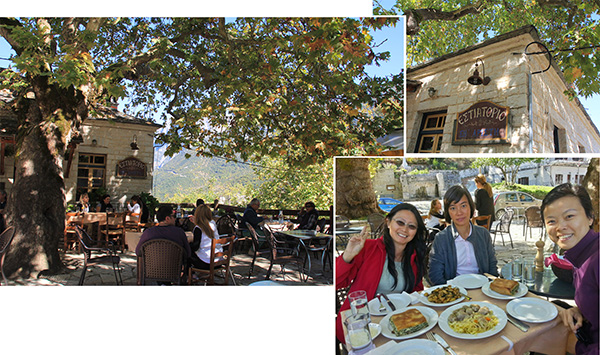 After lunch we drove to a viewpoint where we could see the entire village of Aristi. We could see the houses dispersed over an wide area and the huge mountain range behind. This view would have been even more stunning if we were to view it 2 to 3 weeks later at the peak of autumn when all the greens were in different shades of orange, yellow and red.

The distance from Aristi Village to Papigo Village was about 13 km and it took us about 30 minutes to complete the journey. There was only one road between the two villages and a stretch of this road consisted of at least fourteen switchbacks. 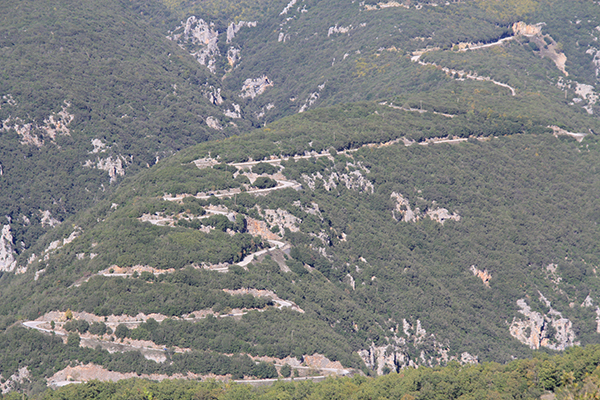 Switch Back road on way to Papingo Village

Papigo Village had two districts, the first ws Megalo Papigo and the second was Mikro Papigo. Our first sight at Papigo Village was the Kolymbithres or Ovires. 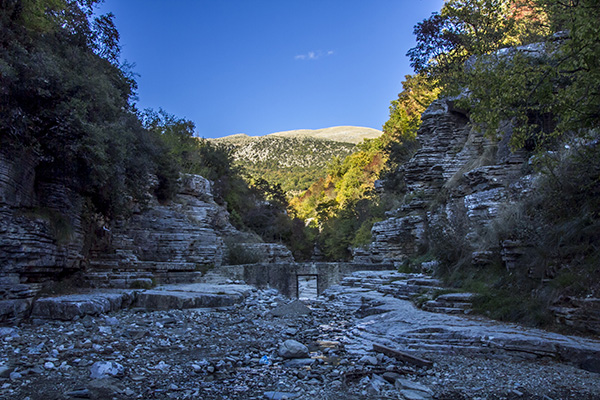 The kolymbithres were natural formation that was carved by water of the Rogovo stream. The pits left on the limestone ground was used as summer pools. We did not see any pools during our visit as the volume of water coming down the stream was very small. 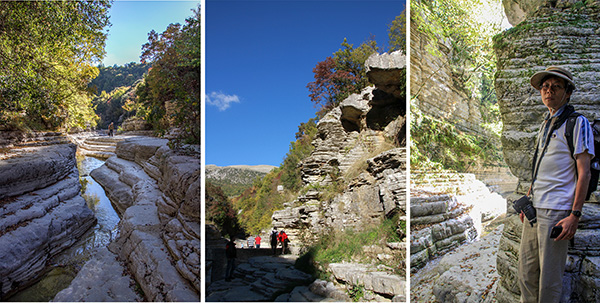 We walked upstream, sometimes on the left side of the stream, sometimes on the right depending on what caught our attention, depending on where it was easier to walk. The rock formation was very interesting, it looked like layers and layers of pancake one on top of the other. There were some hints of autumn in the area, as some of the leaves were already turning color. After about one hour of exploration we stopped walking further upstream as our path was totally block and we were not into strenuous climbing.

Kolymbithres back to Megalo Papigo was only about 1.3 km and the drive was not more than 5 minutes. Our accommodation for the night was in Megalo Papigo. After we dropped our luggage at the guesthouse we were ready to explore the village. The village was located at the base of Astrakas Peaks so everywhere in the village whenever we looked up we would see Astrakas Peaks looming above us.

As the evening approached the Astrakas peaks went through a series of interesting colour changes. It started out as whitish grey and as the sun began to set it turned orangey golden to reddish to dull grey and to totally black at night. 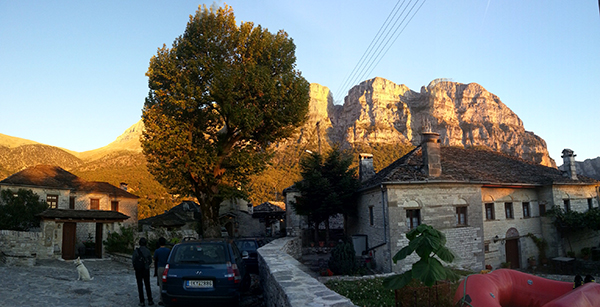 The golden Astraka Peaks as seen outside our Hotel

Megalo Papigo was very much a stone village. The houses were built from rectangular stones, the roofs from stone slabs and the low boundaries of the houses from irregular shape stones. The roads and the steps in the village were made of cobble stones. Even the backdrop of the village, Astrakas Peaks, was an enormous rock mountain and it matched the village rocky theme. 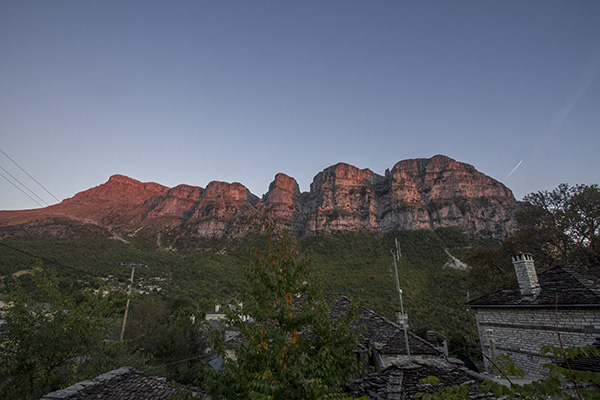 The Red Astrakas as the sun just went over the horizon

As the daylight disappeared street lights and the house lights came on, their golden hue softened the the rugged look of the village. The air turned cool and the surrounding became quieter. Our breaths became misty and the crunching sound of our footsteps on the cobble road sounded louder. 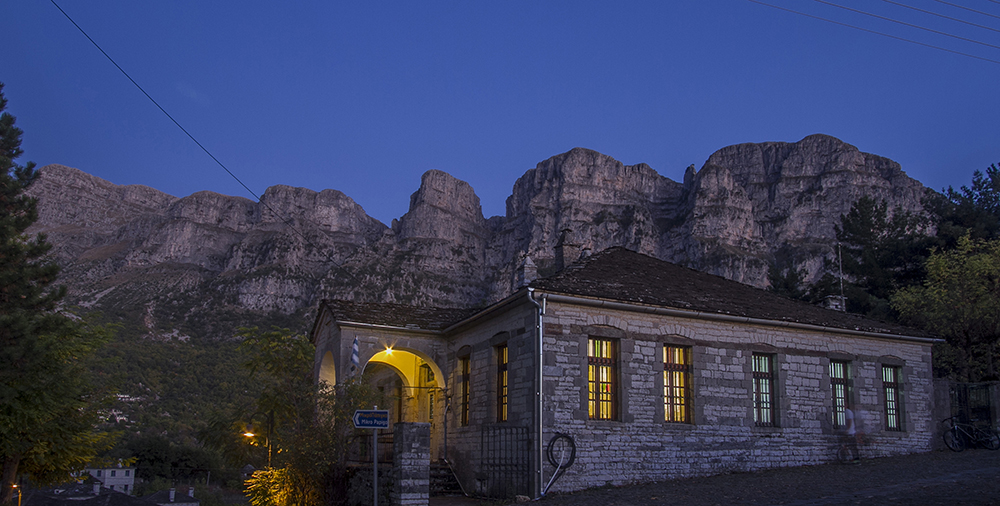 Town community hall and the grey Astrakas after the sun set

There was a couple of restaurants at the village center so there were not many choices to pick. Though it would be nice to sit at the outdoor area of the restaurant so that we could continue enjoying the evening scene of the village, we found it too cold to stay outside. So it was very welcoming when we entered the restaurant and found it nice and warm with a roaring fireplace at one corner. We had a wonderful and leisure dinner. Somehow when the weather turned cold all hot food tasted great. 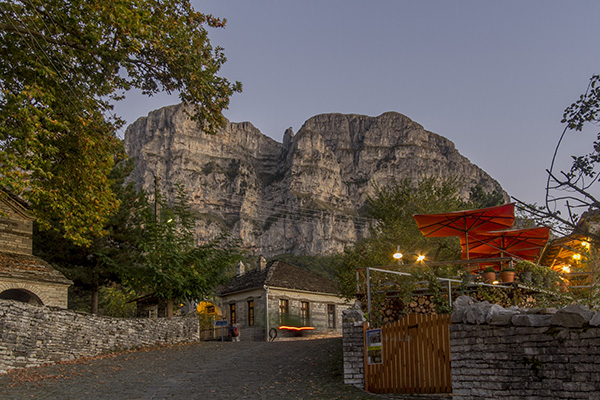 Accomodation for the night at Archontiko Geki 1876 Guesthouse

I had booked this guesthouse before we left for Greece. Archontiko Geki 1876 charged €75 per double/twin room per night. Its price was double that of other small accommodations ran by locals in other parts of Greece.

Unfortunately there were limited accommodations in the village and rather than risk not having a place for the night I had booked two rooms a month ahead of our visit.

This guesthouse used to be one of the biggest and richest aristocratic houses in Papigo and was built in 1876 in the characteristics of rich Zagorisio style. 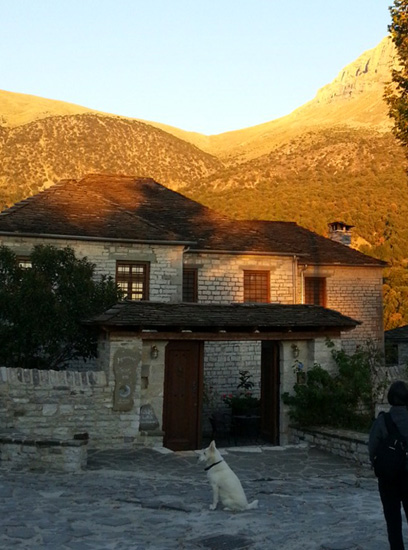 We parked our car along the road just in front of the guesthouse. From the doorway leading into the compound of the guesthouse it did not looked very impressive. After we entered the doorway we found ourselves in an open courtyard which led to several houses. The main building was a large two storey house that served as the guesthouse. The owner, her husband and daughter lived in a separate house and the kitchen was housed in another building.

Walking into the main house we were very surprise on seeing the interior. It was beautiful, in the aristocratic way. The ground floor had a huge living room with sofas and table and a grand curve staircase that led to the second level. The floor and ceiling were made of wood beautifully polished. The wall was built using stones that looked so thick and heavy. Unlike the rocks on the external walls of the house the rocks on the internal walls were smoother and shinier.

Our rooms on the second level was also very beautifully furnished and the ensuite bathroom was lovely too. The only problem was the wifi that according to our host could not penetrate the thick wall so the wifi signal was very weak in the room. 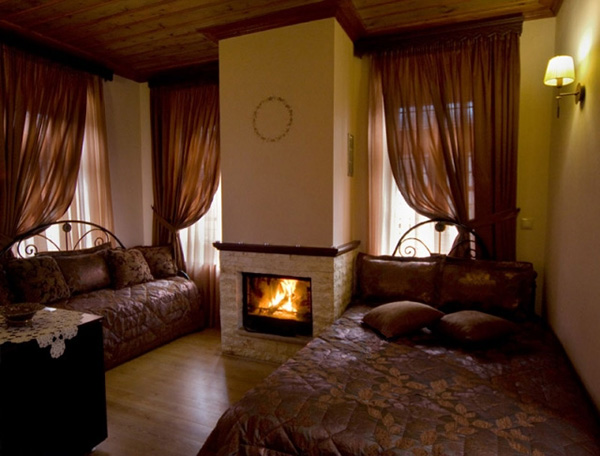 Though the room rates were expensive I thought it was very worth it as we got to experience some authentic Zagori living style. 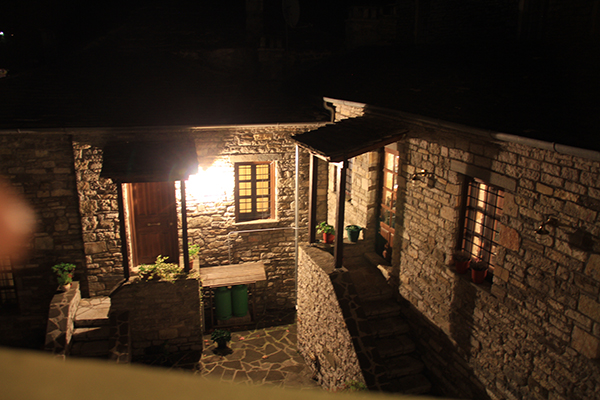 The kitchen building as seen from the window of my room