I was more exited about my second sightseeing destination and was keeping my fingers crossed. It might be a total disappointment as there was no guarantee that I had come at the right timing. 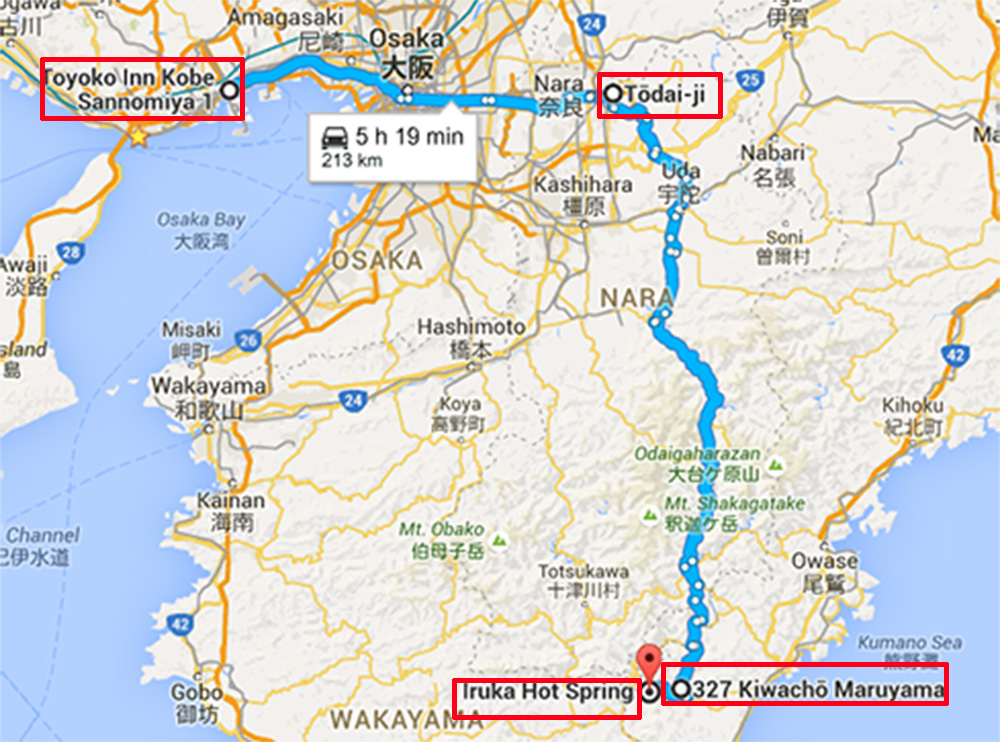 We had a wonderful and tiring day, both sightseeing destinations were more beautiful than our expectation. The long drive southward was well worth the sight that we saw at Maruyama Senmaida.

Breakfast was a pretty standard affair for Toyoko Inn chain of hotel.  It was a buffet breakfast and the spread on the table consisted of the standard stuffs like rice, bread, pasta, miso soup, eggs,Japanese vege etc. Since breakfast was free of charge, we did not expect much. 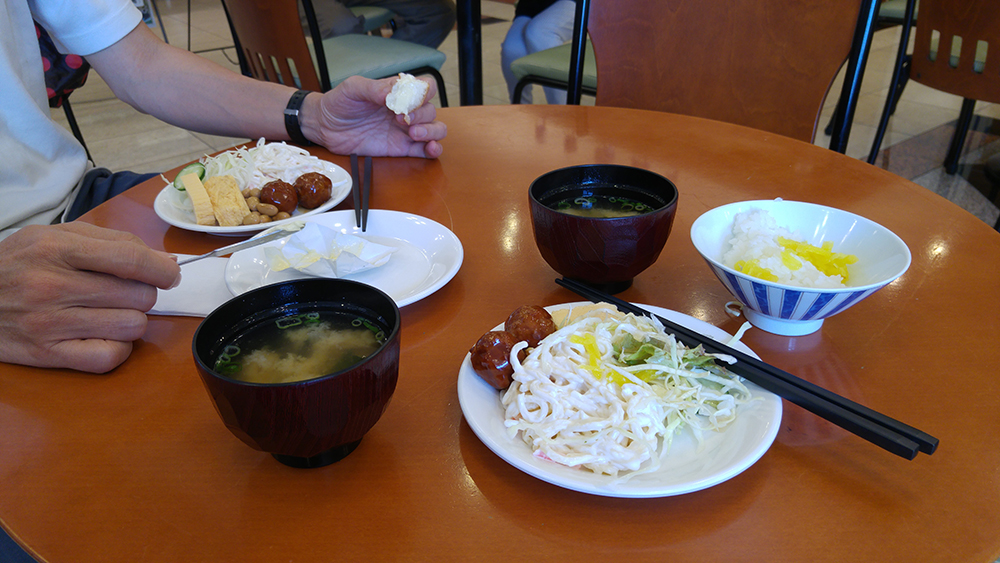 Unfortunately at 9.30 am Todai-Ji was packed with visitors and vehicles. All the big and small car parks near Todai-Ji were full. By the time we managed to park  we were about 1 km from the entrance of Todai-ji!

After 20 minutes of walk we reached the street that led to temple south gate. There were many people and deer. These deer were not afraid of the humans and many times I saw them approached unsuspecting visitors from behind and pulled off plastic bags from the humans’ hands. These deer were looking for food, a type of special crackers that visitors bought and fed to them, so these deer associated plastic bags to their food.

As we walked further down the street, the crowd became denser and denser. The south gate of Todai-ji was huge. The largest Buddhist temple door that I had seen to date. 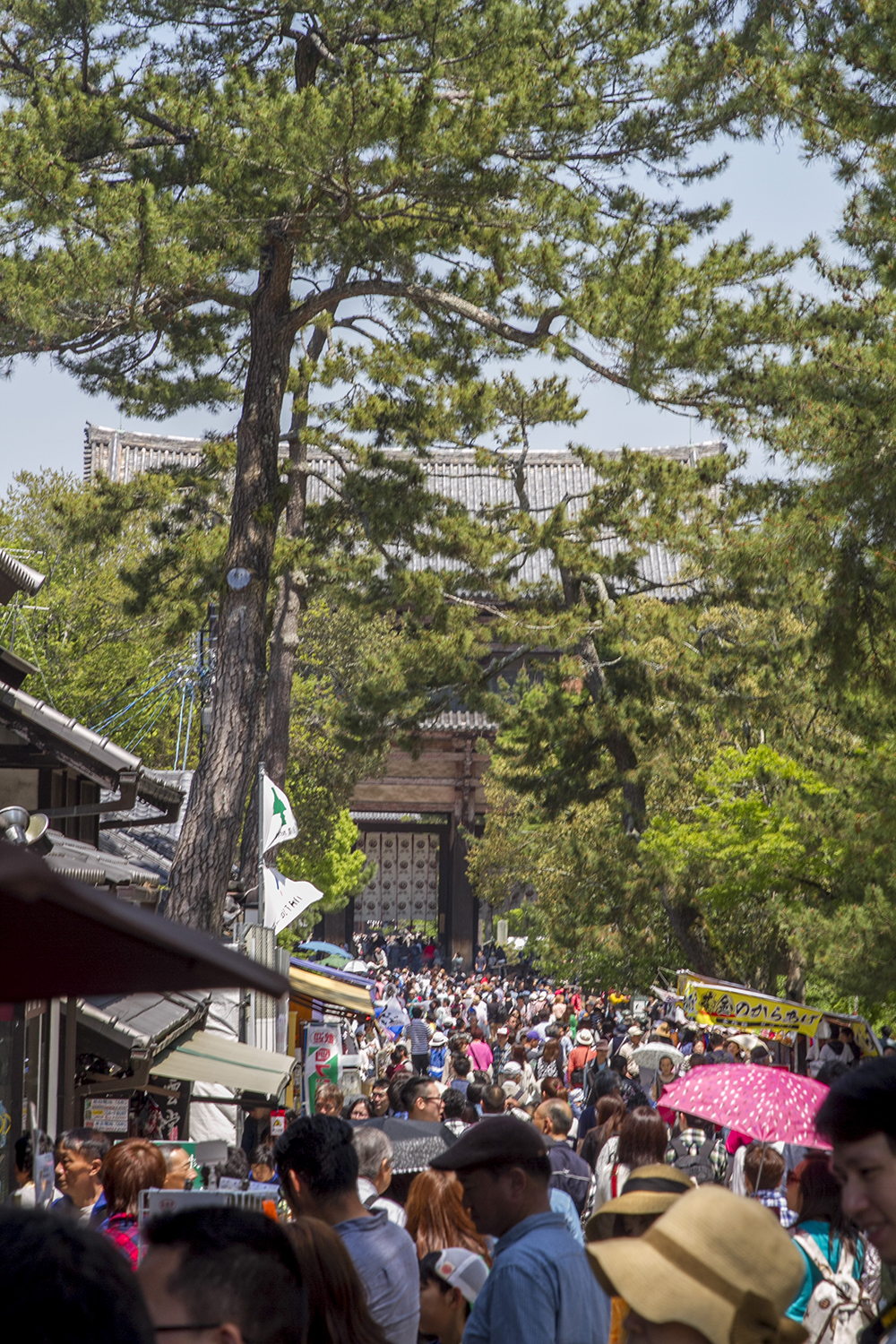 Mon (門) means gate in Kanji. It refered to the gates used by Buddhist temples or Shinto Shrine. These gates of secular buildings were symbolic elements as they could not be completely closed, they marked the transition between the human and sacred world. From my understanding the bigger the “mon” the more important was the temple/shrine. 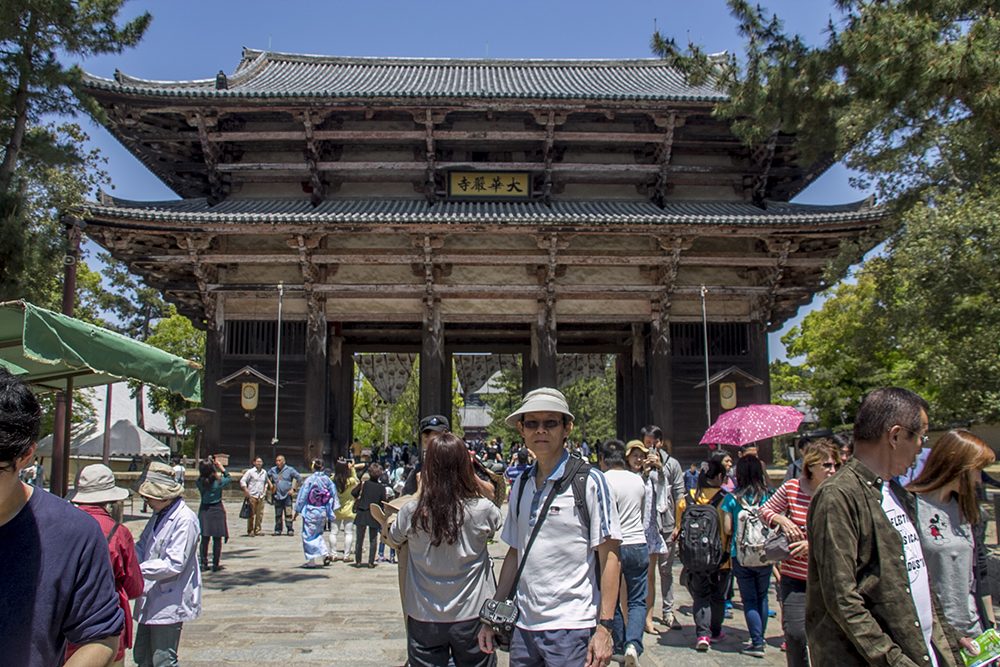 Walking toward Nandai-mon, I could fully appreciate why it was the largest temple entrance gate in Japan. The gate has a double hip-and-gable roof was five bays wide and two bays deep. It housed the wooden statutes of two Nio Kings (deities), guardians of Todai-ji.

After the Great southern gate and to proceed further we had to purchase admission tickets. The tickets costed ¥500 per person. From far we could already see Todaiji main hall, it was magnificently HUGE! This main hall was also called Daibutsuden (Big Buddha Hall) as it housed one of Japan’s  largest bronze statutes of Buddha. This hall was reconstructed in 1692 and was only two thirds of the original hall’s size. Even at this reduced size, it was the largest wooden structure in the WORLD!. 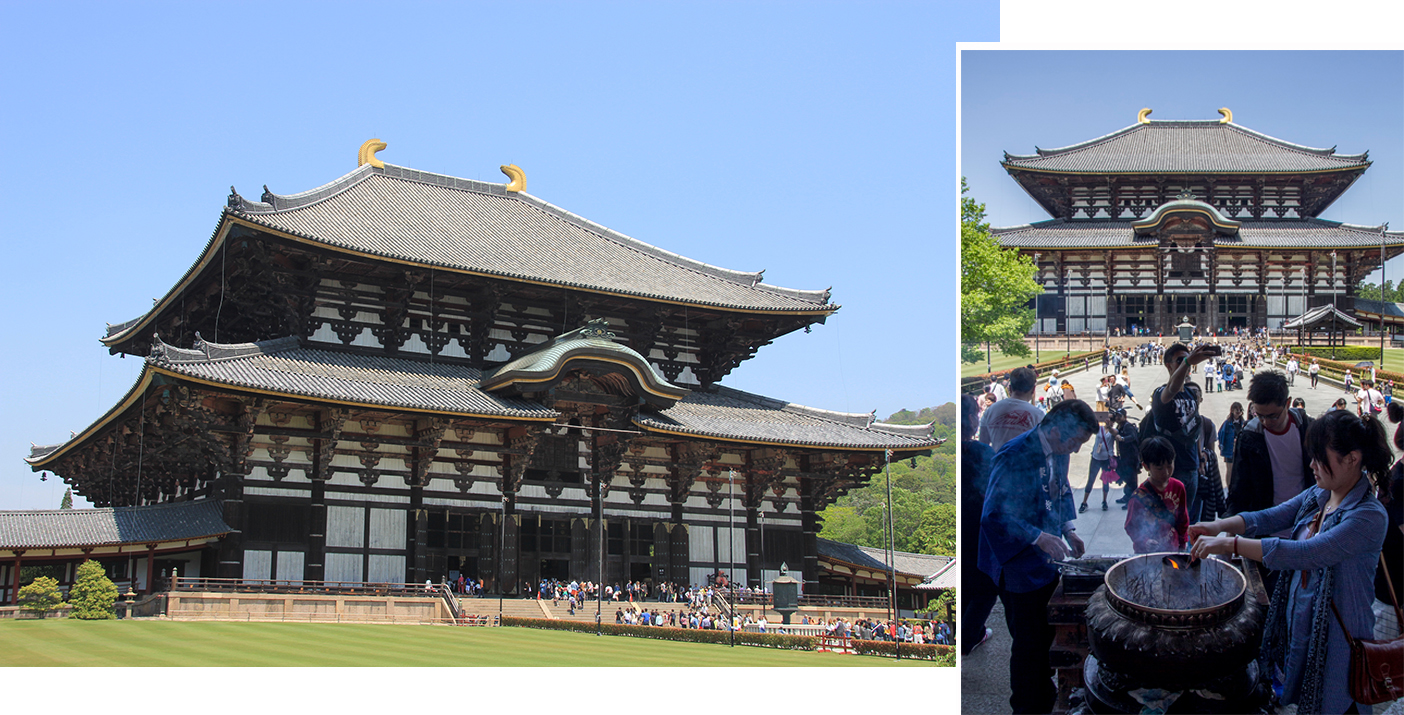 Two years ago, during our previous DIY trip to Japan we skipped Todai-Ji due to time shortage. I was glad that we made a visit this round. In Japan, Buddhist temples were everywhere, Todai-ji was definitely the one that MUST-NOT-BE-MISSED. 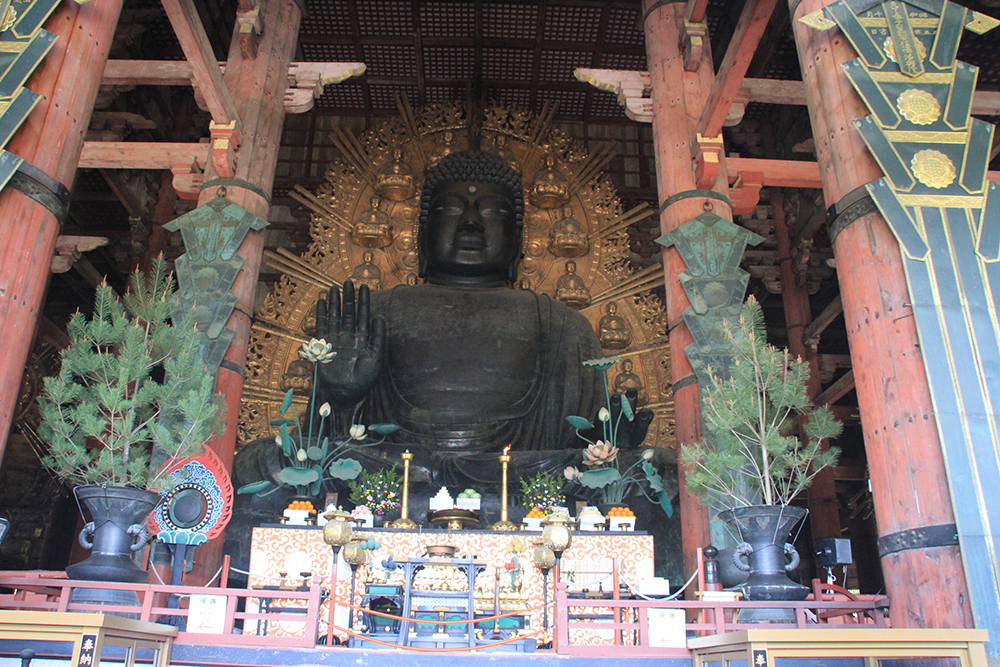 Sitting directly facing the main door of Daibutsuden was a huge bronze statue. This statue was 15 metre tall. On both sides of the statues were smaller statues of Bodhisattvas. We walked to the back of the hall and saw a fierce-looking statue, it was Komokuten a guardien diety dressed in full armour. 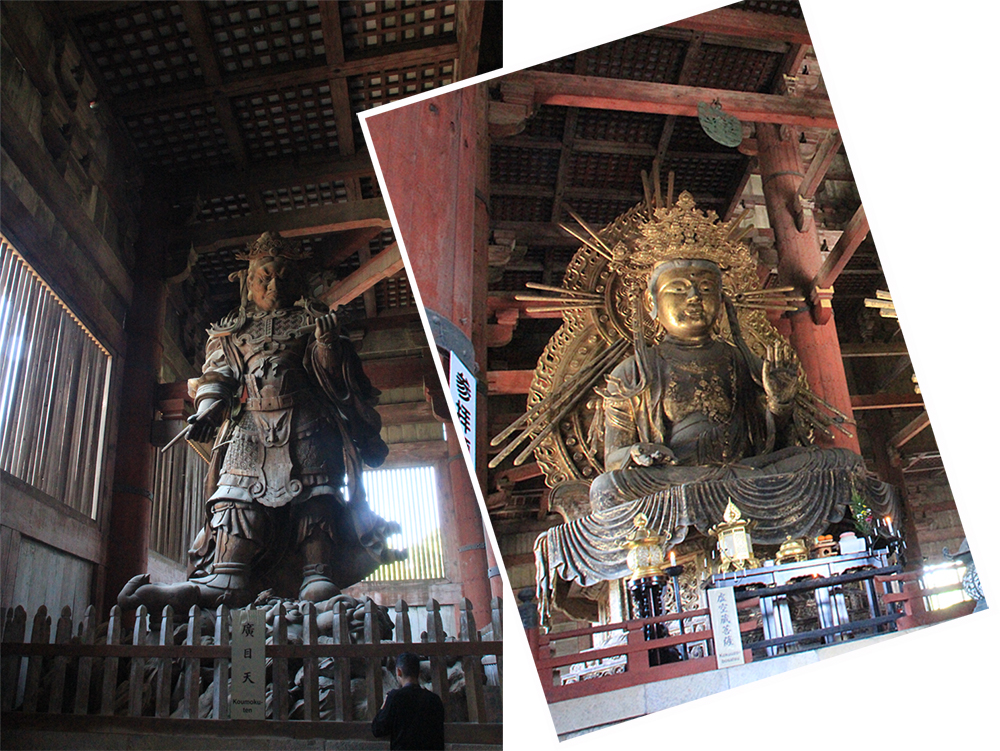 Coming to the right side of the hall, we saw a group of children queuing up. At the front of the queue was a tall pillar with a through hole its base. One by one the kids crawled through the opening. There were even some big adults squeezing through the hole too. This hole was of the same size as bronze status, Daibutsu’s nostril and it was said that whoever that squeezed though the hole would be granted enlightenment in their next life. 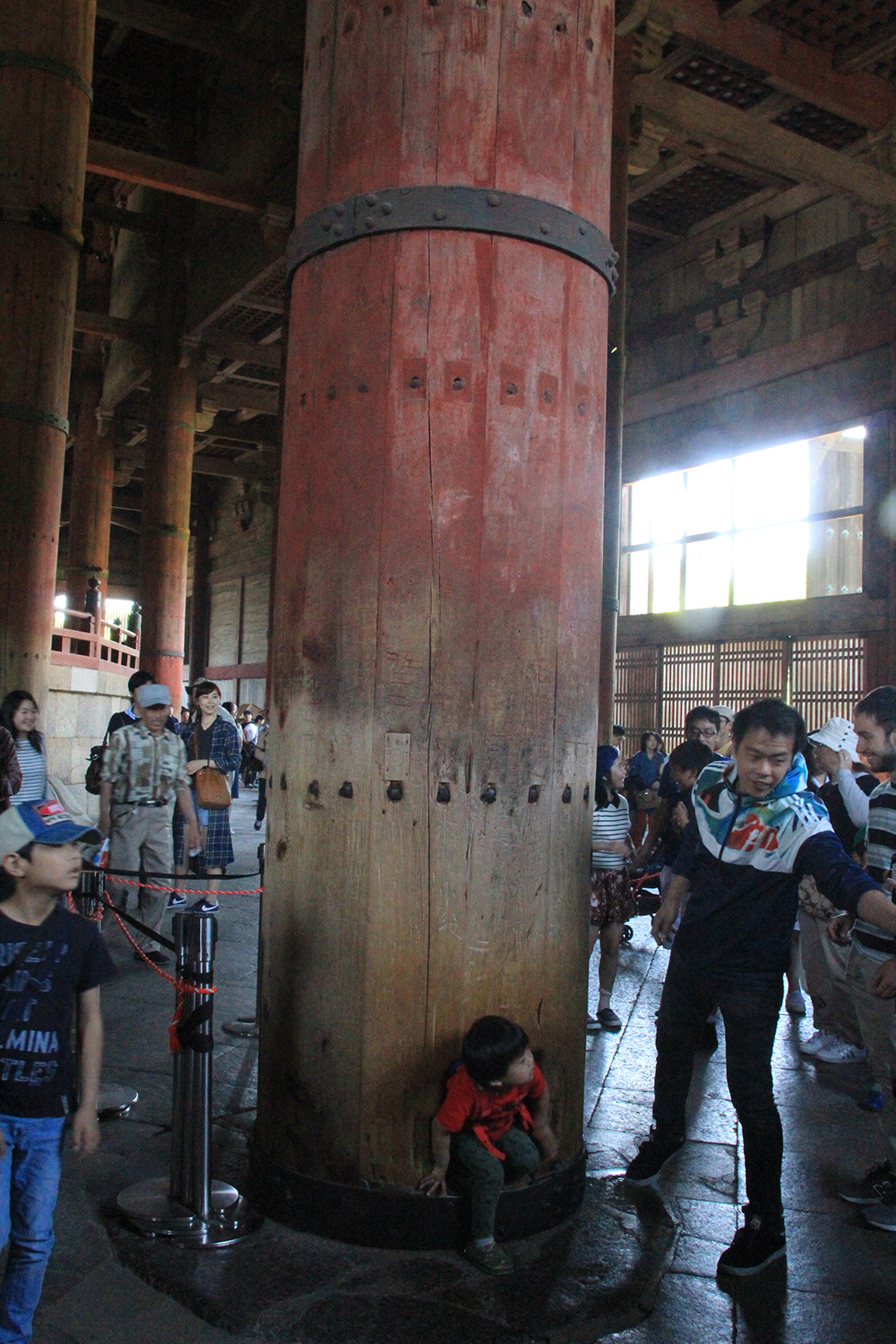 Finally at about 1 pm we left Todai-ji and took a different route to the car park where we parked our car. The car park charge was ¥500, there was no attendant stationed at the car park to collect payment or an automated collection system. Based on “honest” system we dropped the money in a collection box placed near the entrance of the car park.

Senmaida (one thousand rice paddies)  was about 140 km south of Todai-ji, the car GPS system estimated that the journey would take about 5 hours while our google map stated about 3.5 hour. Though the distance was not too long but we would be travelling on country/mountain/village roads at slow speed limit of around 40 to 50 km/hr. We left Todai-ji at about 1.30 pm and gave ourselves 4 hours to reach senmaida. We hoped to reach senmaida before sunset and if my calculation was correct we should be seeing wet paddy fields. Mid May every year, the Maruyama Senmaida stages a Rice Planting Festival. So around late April to beginning May the farmers should be preparing the  field for planting which meant the paddy fields would be wet. I just hope that we were not too early in the season or we would end up seeing patches of ugly brown soil.

At Maruyama Senmaida, there were four possible view points. Three were reachable by car, the 4th view point which was a high view point would required some 15 minutes of trekking up hill. I hoped to reach senmaida early to investigate all the four view points before deciding the best spot to see the sunset. 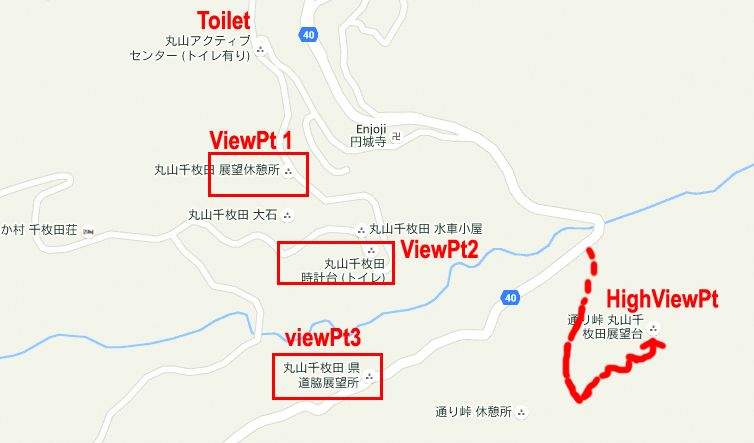 After about four hours of driving we finally reached senmaida. We drove to view point 1 which was a small piece of jut-out land with a small open pavilion overlooking the paddy terraces. The space was good enough for about 6 to 7 cars. We found an empty space and quickly parked our car in it. There were already several photographers at the viewpoint. Their huge SLR cameras were set on tripods positioned along the edge of the viewpoint. We could see that view point 2 was further downhill which would not provide a better view. As for view point 3 and the high view point they were out of sight. We were reluctance to drive off from view point 1 as we might not get a place to park our car when we returned. So we decided to stay put at view point 1 till sunset.

The sight of the terraced paddy fields, the reflections, the setting sun over the mountains were very stunning, very beautiful beyond description. 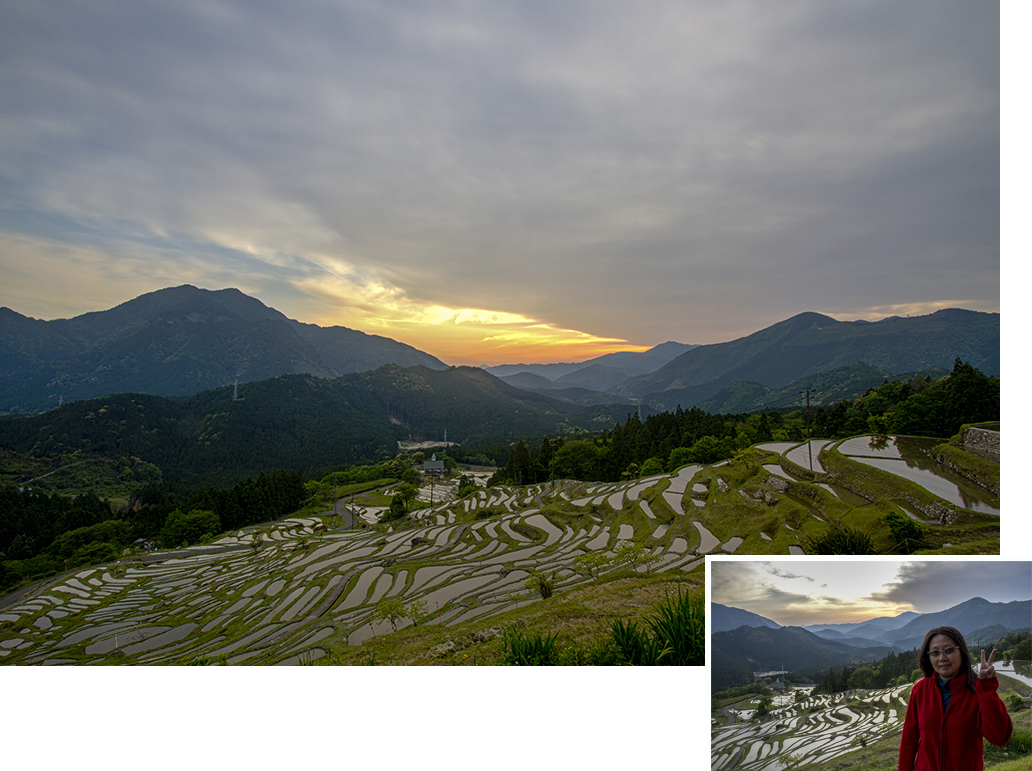 I had always wanted to a see terraced paddy fields when they were wet but the timing was never right till today. Even as we drove towards Senmaida I was still worried that the timing might still be incorrect. It was a relieve to finally reach here and find thousand of wet paddy fields!

After the sunset, we drove over to view point 2 and view point 3 to check if the view would look any better than that of view point 1. View point 1 was definitely the winner of the three. We planned to trek up to the high view point the next day.

I had booked Iruka Hotspring Hotel (Iruka Onsen Hotel Seiryuusou) for the night. It was about 6 km from senmaida and could be reached within 20 minutes. We needed a place for the night that was near to senmaida because we wanted to have the flexibility of staying till as late as possible at senmaida. My original choice was a Auto Camping Place at senmaida itself. The camp site  had small wooden bungalows to let out. I placed a reservation which was later rejected by the camp site owner when they found out that we could not speak Japanese. According to them, if there were any emergency situation we would not be able to response to the Japanese instructions.  It was a real disappointment.

It was lucky that I found Iruka Hotspring Hotel , I tried booking Iruka on Booking.com but it kept informing me that there was no room for the night I needed. Surprising by going to Iruka website I could find empty rooms for the night we need. So I booked the room through Iruka website.

We booked a package that included dinner and breakfast. The location of the hotel seemed rather remote, there were no nearby shops or restaurants so it would be more convenient to have our meals at the hotel. I booked our room pretty early (more than 30 days in advance) and got a ¥1000 per person discount. The total room package (inclusive of dinner and breakfast) was ¥16600.

By the time we reached the hotel it was close to 7.45 pm, we quickly checked in placed our bags and proceeded to the dining room for our Beef dinner. 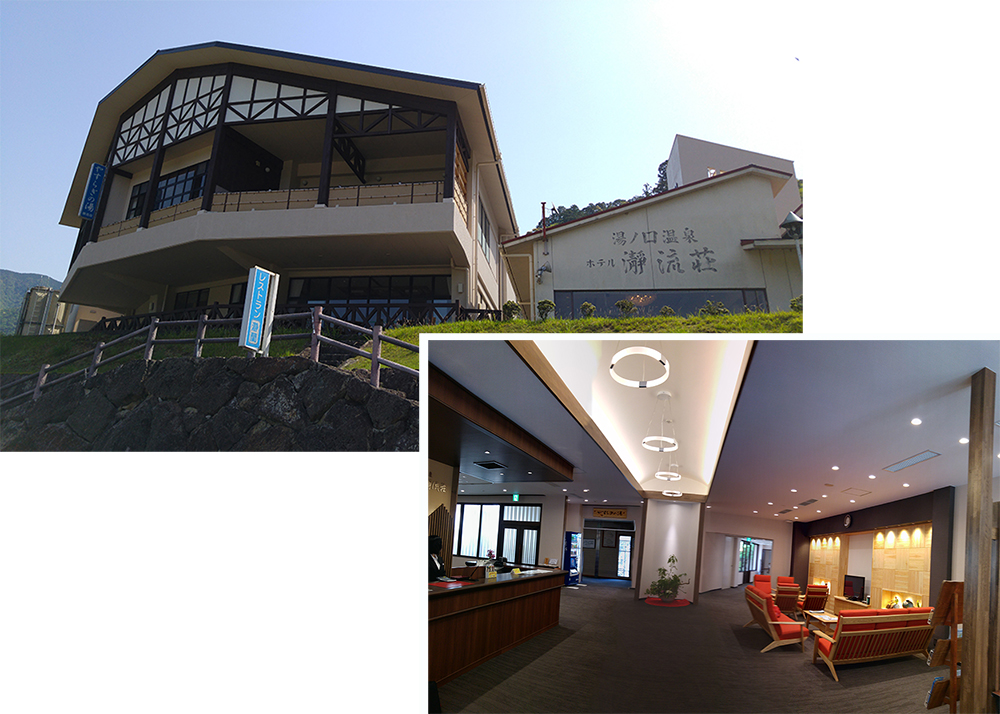 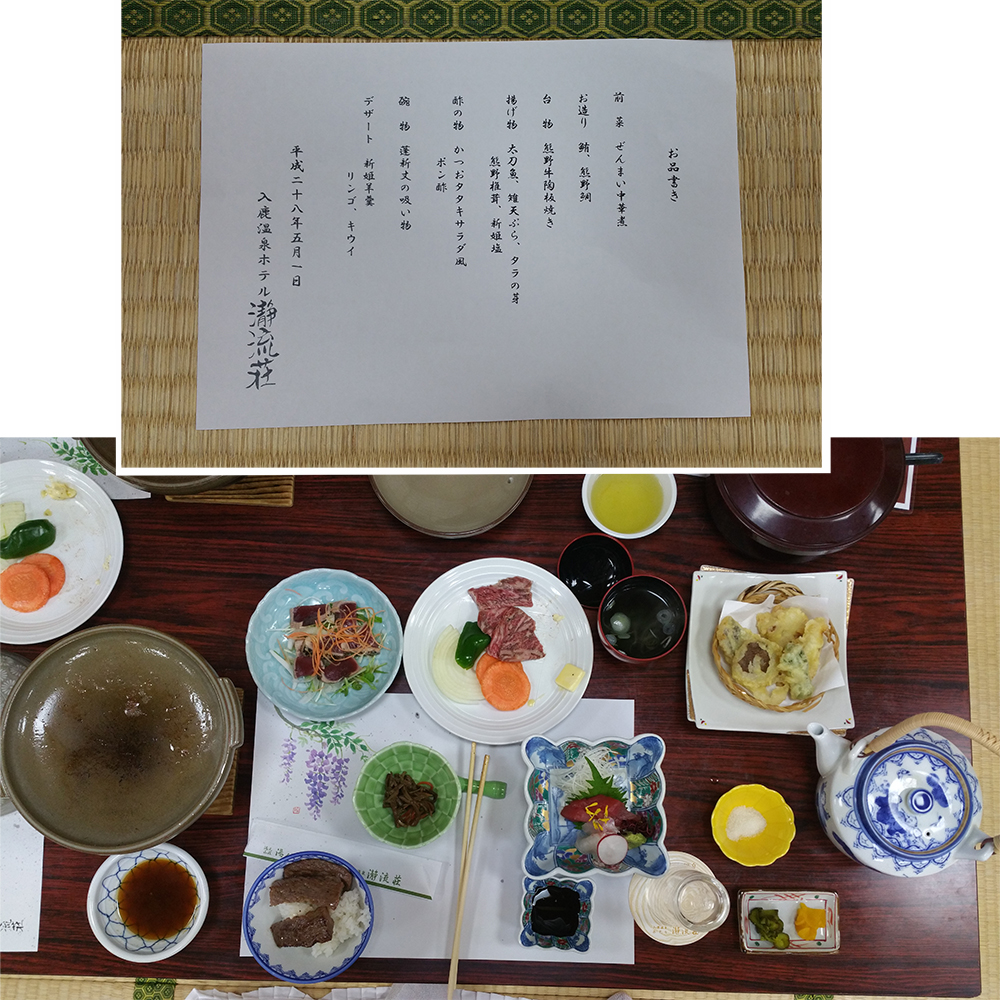 Dinner turned up to be surprising good. I had opted for a cheaper dinner to save cost but was surprised to find the dinner so complete.

This was our second night eating beef. This time we ate Kumano beef. I had not heard of Kumano beef so I thought it was some normal beef and nothing like Kobe wagyu beef. It turned out that the beef was very good, it had the same marble texture (fat) like that of wagyu’s. It tasted sweet, juicy and very tender.

We enjoyed our dinner very much. It was fun sitting cross legged grilling the beef on a brown porcelain plate above a mini stove. Besides us, there were only two other couples eating at this late hours. The waitress was very chatty and helpful, every times I took out my handphone to take a photo of the food she would offer to take photo of us with the food. 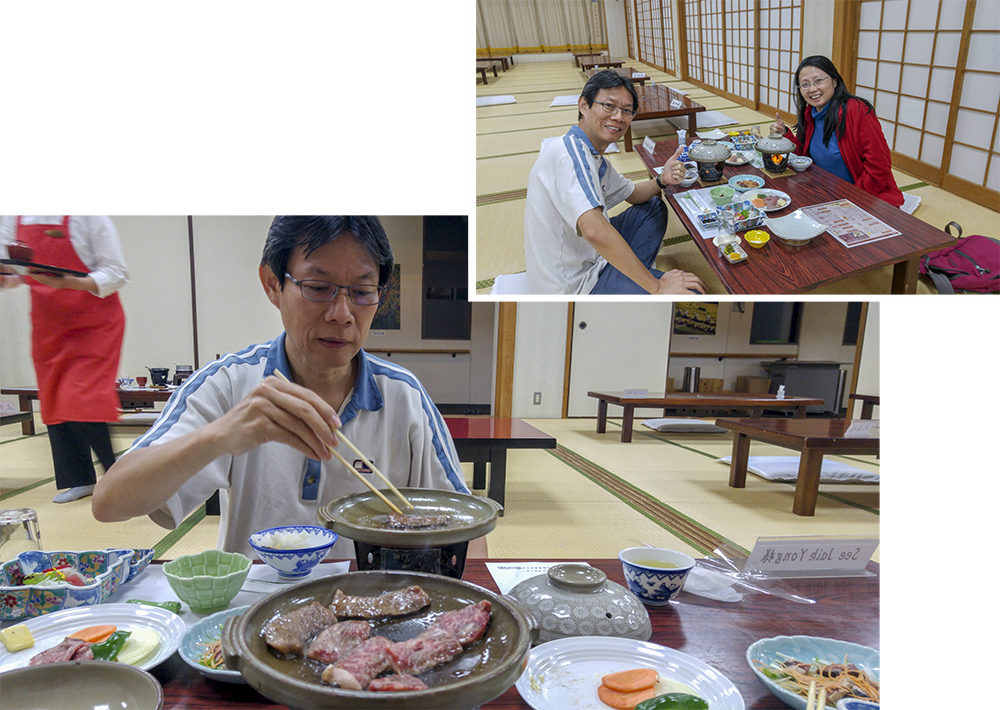 We had a wonderful dinner and after eating and resting we were to our room. Our room was a twin room, it was huge and very comfortable. The only issue was it had an ensuite toilet which only had a water closet and and hand washing basin there was no shower or bath.

I would have to use the shared female onsen to clean up. I decided to be brave at least once. So I packed my stuff and went to the onsen! There was a “stripping room” where I took off everything and left them in a basket. Then I entered the onsen room. The place was all misted up due to the hot water spa. There was a row of low showers where I had to sit on a stool and wash myself clean using the soap provided before going into the onsen spa pool. The onsen pool was huge… it could easy take twenty people. Wwwoooww… the water was hot. So hot that I had to gradually lower my body into it. I sat for about 10 minutes before giving out and left. It was too hot for me. I went back to the “stripping” room which was also the “preening” room where there were all sort of stuffs like body lotions, hair dryers, brushes, face care stuff. They even had a oven like container to store clean hair brushes and kept them warm.

I had a great time at the onsen, it was my first time dipping into the pool and best of all I had the entire place to myself! 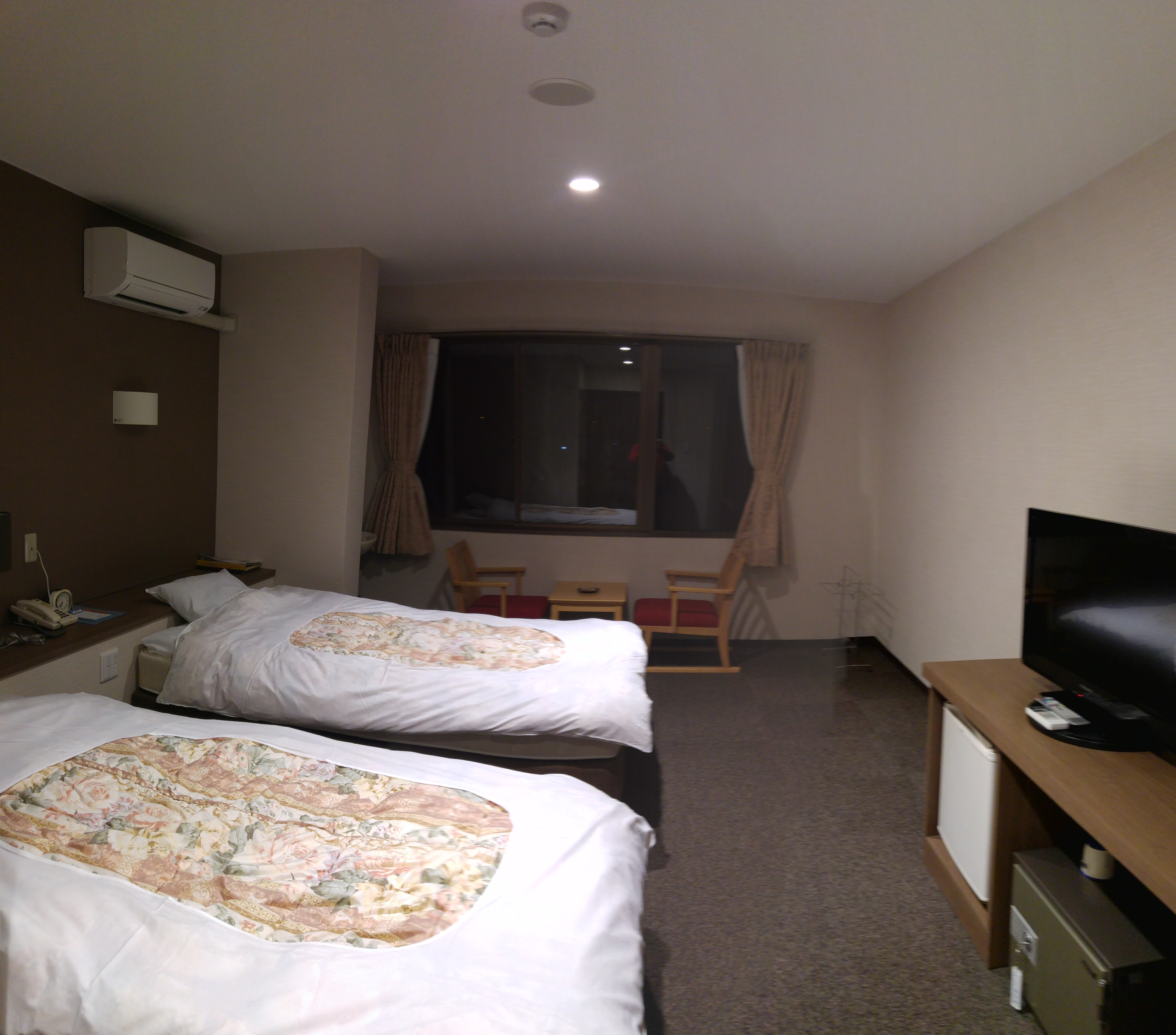