Our plan for the day was to explore Queenstown and its outlying areas. In the morning we would go into Queenstown downtown, in the afternoon we would drive north along Lake Wakatipu to visit Bennetts Bluff and then Glenorchy. We might proceed to Kinloch if time permitted. The drive from our hotel to Glenorchy was about 55 km, an hour drive, one way. 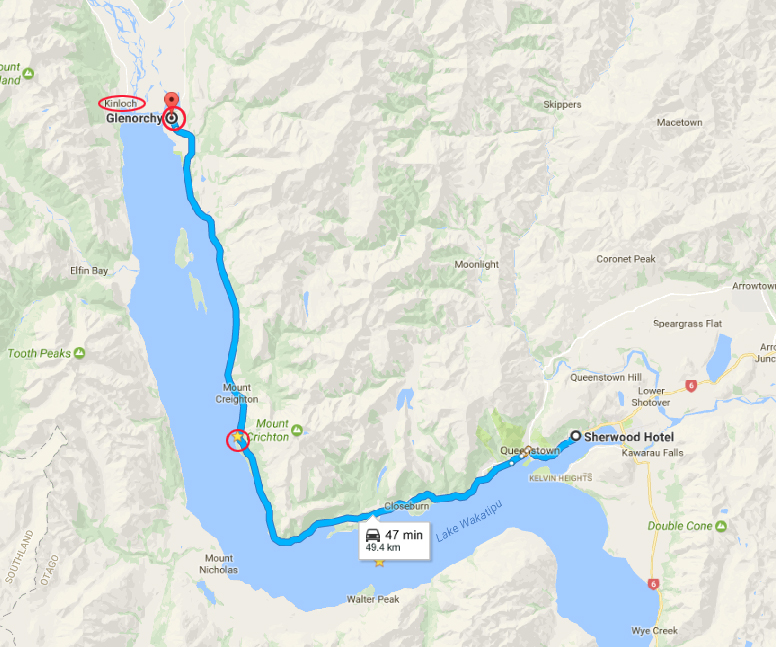 It was a wonderful day of absolutely no rain. We enjoyed Queenstown downtown very much, though it was touristy it was also very charming. It had a scenic waterfront.

Bennetts Bluffs, a place midway between Queenstown and Glenorchy was much more beautiful than our expectation. At Glenorchy, a town by the lake, we were captivated by the dark serene beauty of the lake and its surrounding especially after the sun went down.

Queenstown downtown was only 9 km from our hotel and it took us only 10 minutes to reach it. In town we had problem finding a suitable parking lot. The lots we saw only allowed at most 30 minutes of parking, this would not allow us enough time to eat breakfast and explore around. Eventually we drove a couple of streets away from the central of town and found some parking lots that allowed 120 minutes of parking duration.

Downtown was very touristy with many shops selling all sorts of stuff, from branded goods to non branded, imported products to local products. The town was modern and yet still very charming, probably because all its buildings were the low type and not the monstrous tall commercial type. We were pretty early so most of the shops, cafes and restaurants were still not open for business. 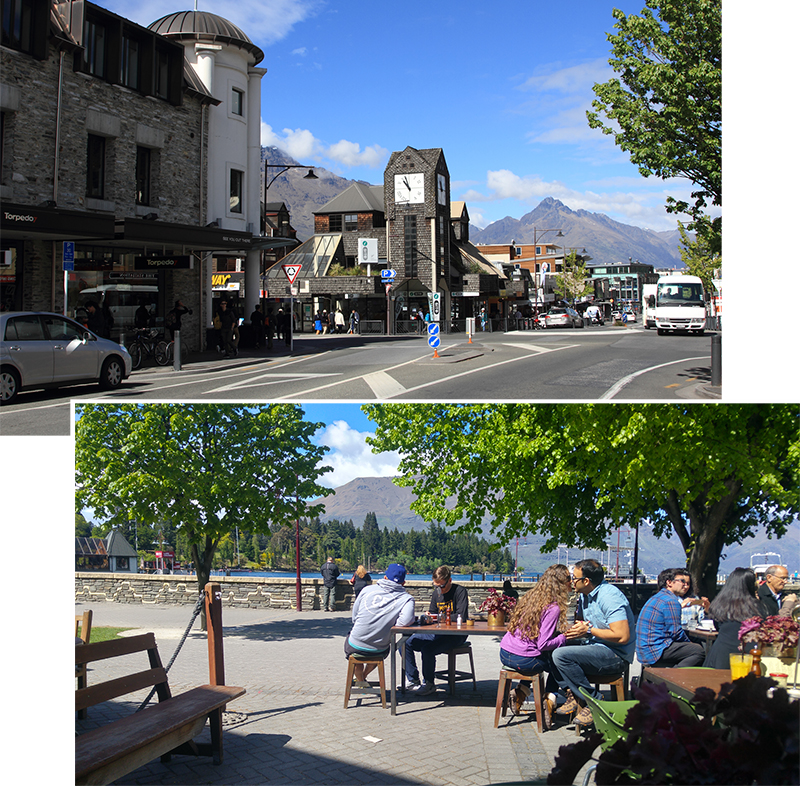 Near the waterfront, we found a couple of cafes. We were not sure which of them would serve good breakfast. So as usual we went into the one that had more customers. The  Vudu Cafe had both indoor and outdoor dining areas. Since the weather was so nice we sat outdoor. 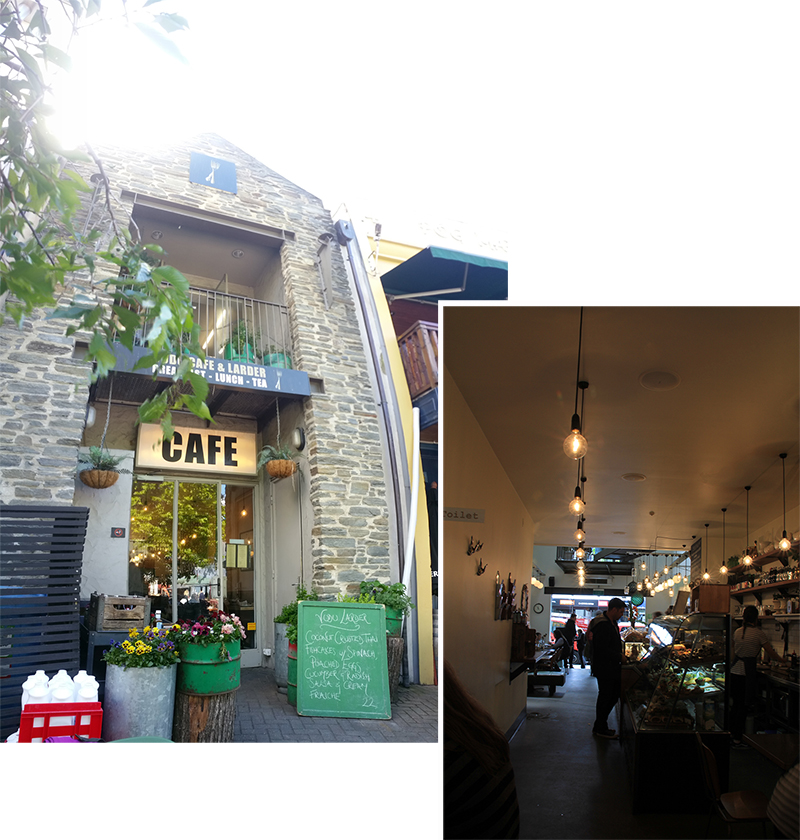 Our breakfast came up to about NZD $28 for one pie, one sandwich and two cafe lattes. Eating out in New Zealand was rather costly, but after preparing and cooking breakfast for the three mornings in a row, it was nice to sit down and be served and not have to worry about cleaning up after eating. 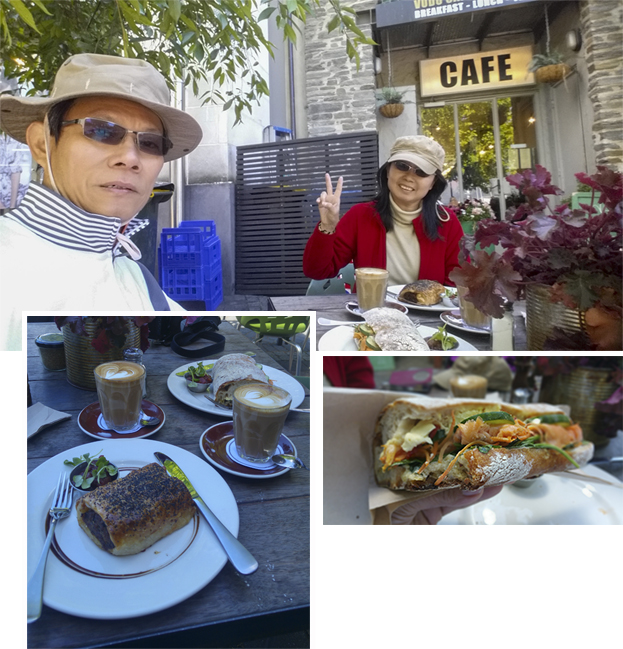 After a satisfying breakfast we took a walk along the waterfront promenade along Marine Parade Road. It was still early so there were not many people around. Looking far we could see the blue shimmery lake  with wide mountain ranges and huge blue sky as its backdrop. Nearer to us there were birds, boats and people livening up the environment with noises and colors. We could have gladly sat at the promenade the whole morning doing nothing but laze about, unfortunately it was close to the 120 minutes since we had left our car at the slightly “faraway” parking lot. Not wanting to receive a parking fine for overdue parking we left the promenade and returned to our car. 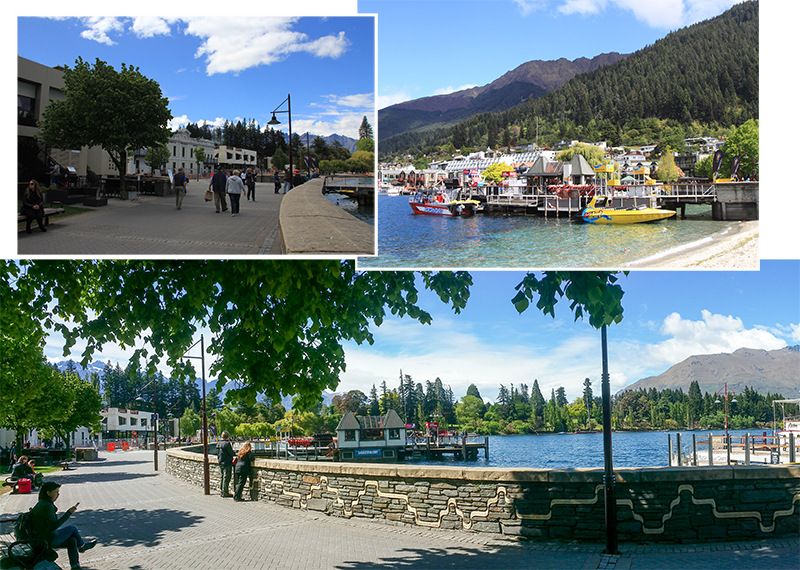 Driving to Bennetts Bluff took only about 25 minutes. The day was bright and there was absolutely no sign of impending rain at all. Bunnetts Bluff scenery was stunning and breathtaking. All the colours were out, blue, white, yellow and green contrasted beautifully. The huge clouds in the sky were reflected by the ripples in the water, creating different shades of blue in the water. 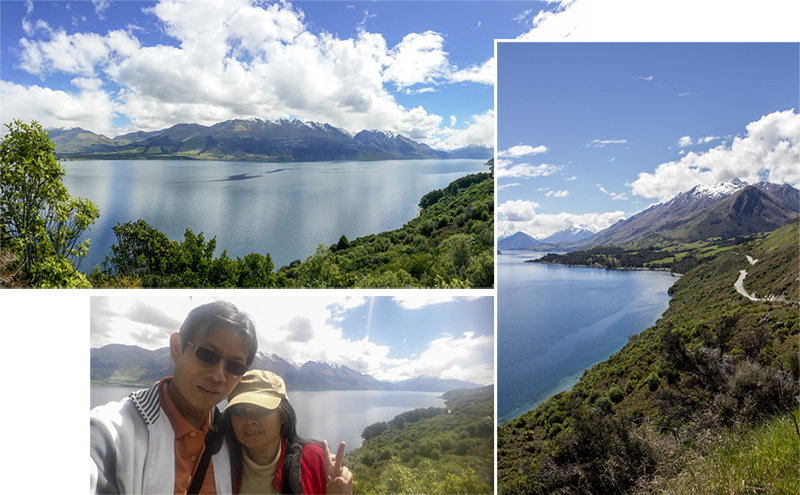 Bennetts Bluff at about 2pm

At Bennetts Bluff there was a set-in by the side of the road which was large enough to park a few car. We parked our car and came out to view the lovely scenery. This view point was on a higher ground which gave us a panoramic view. 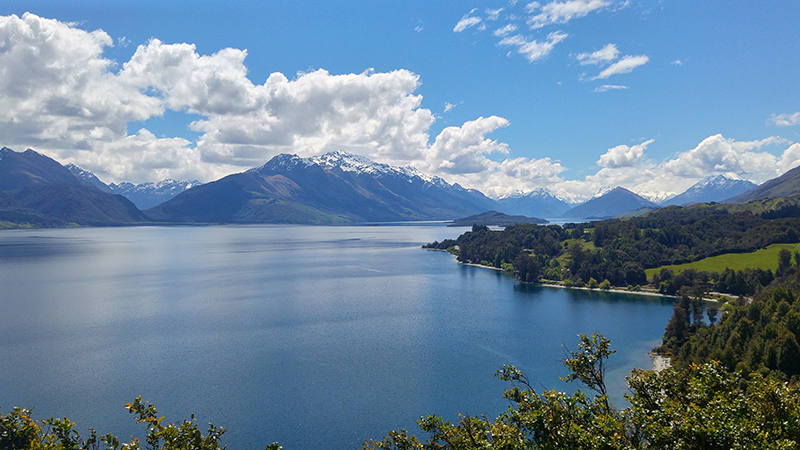 It was about 2.30 pm and the sun was directly overhead, we wondered how the place would look like when the sun was lower. Rather than to wait for another 3 to 4 hours for the sun to begin setting we decided to drive forward to Glenorchy and return to Bennetts bluff at about 6 to 7 pm to have another look.

We were back at Bennetts Bluff at about at about 6.20 pm and waited for the sun to set. Bennetts Bluff looked different at 6.30 pm, the sky was bluer as most of the big white clouds had disappeared, the water was calmer and there were more reflection of the greenery in the water, the land was washed with a slight tint of gold probably due to the ray of the setting sun. 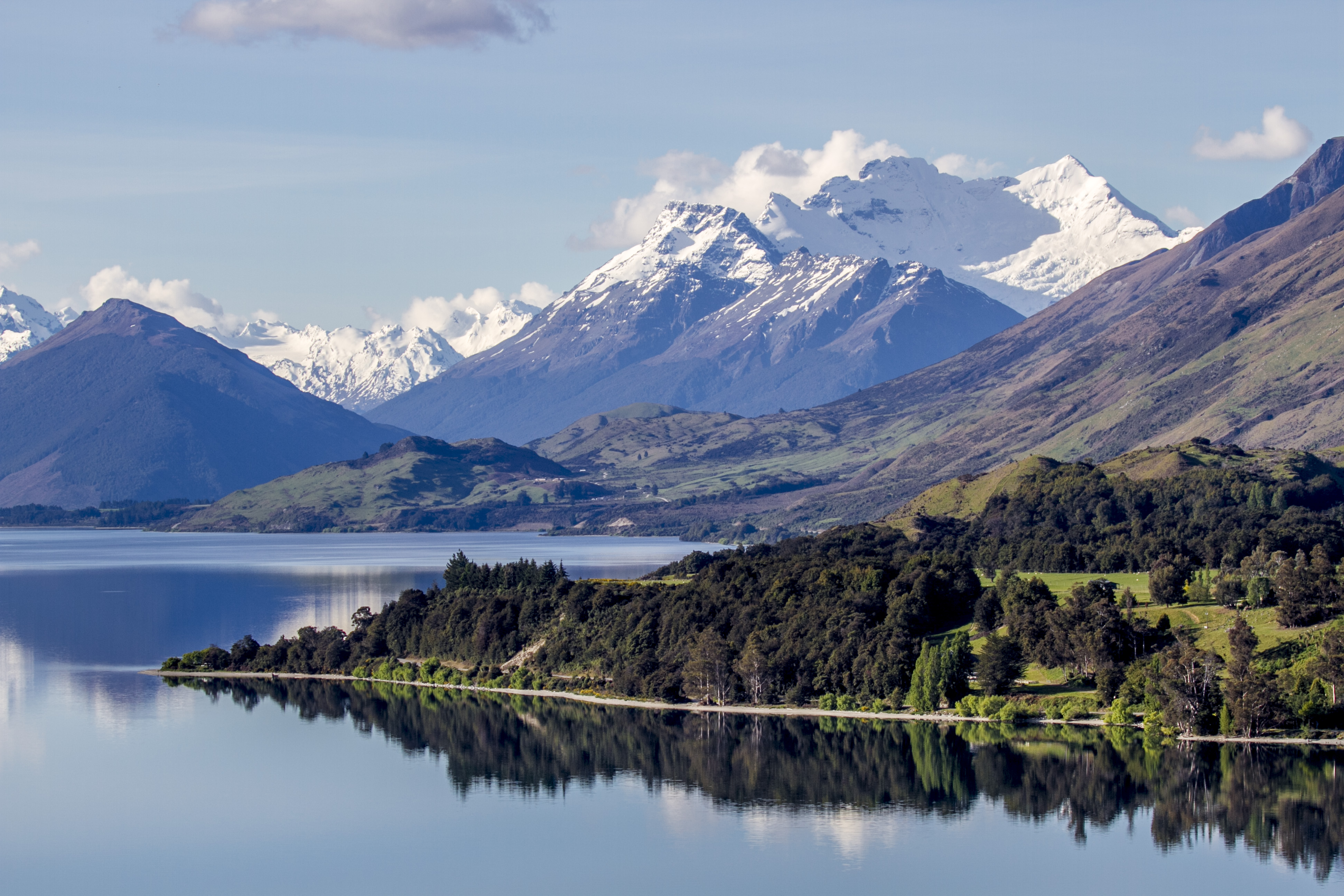 Our conclusion was that Bennetts Bluff looked beautiful whether it was early in the day or later. As long as it was not raining and the sky not gloomy Bennetts Bluff was definitely a great scenic spot.

Looking west we waited for the sun to set, we were not too sure at which position in the west would the sun go down. Unfortunately at this time of the year, the setting sun was covered by the mountain ranges across the lake so it was not as spectacular as we hoped. 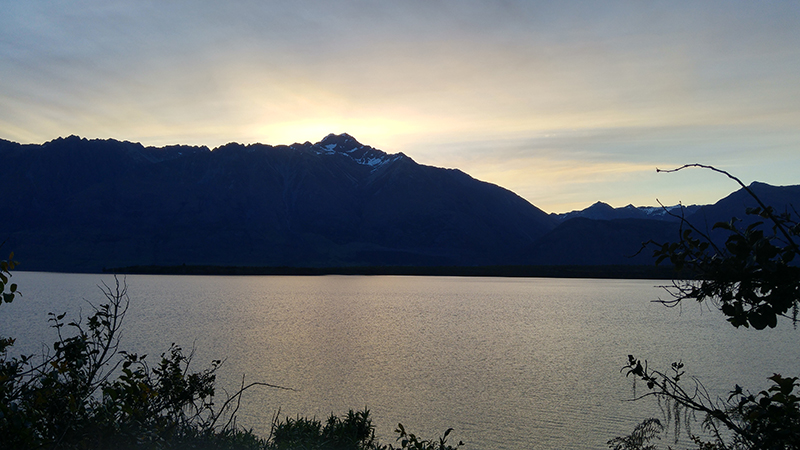 From Bennetts Bluff to Glenorchy was another 21.5 km. This stretch of road was more scenic than the first stretch which was from Queenstown to Bennetts Bluff. We stopped twice along this second stretch to come down to capture more scenic shots. 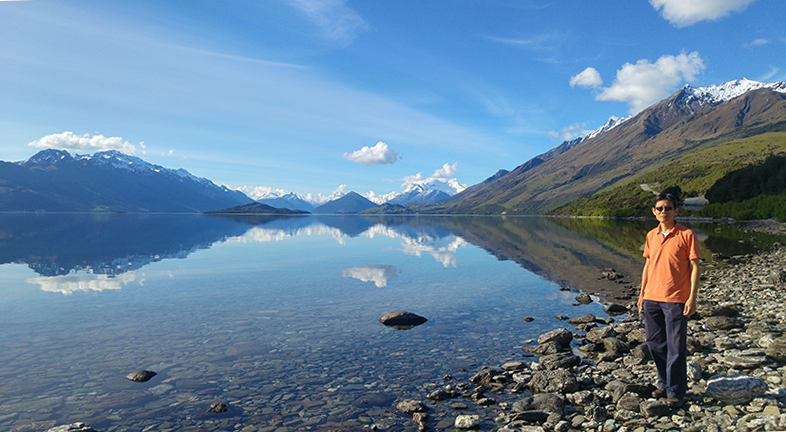 Glenorchy was a quiet town, with just a couple of streets. The only place where we saw some people were at the jetty, they were probably tourists just like us. In just a few minutes we managed to drive by all the roads in the town and spotted several cafes where we could go in for a coffee break later. The most scenic spot of the town was the jetty.

Interesting we noticed that at almost every lake we visited in the South Island, there was always a wooden jetty stretching out into the lake. We like the many tourists who visited this place loved to have our pictures taken at the jetty. 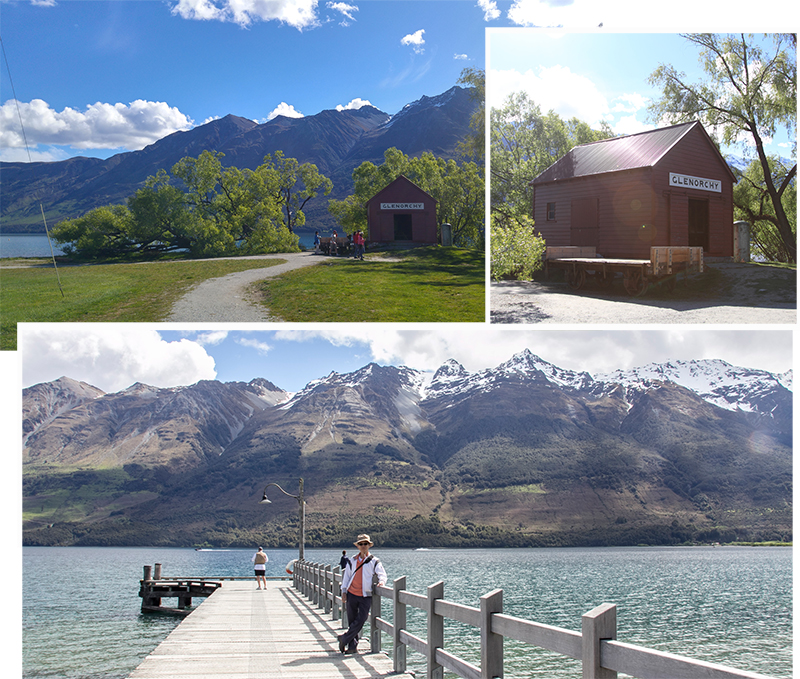 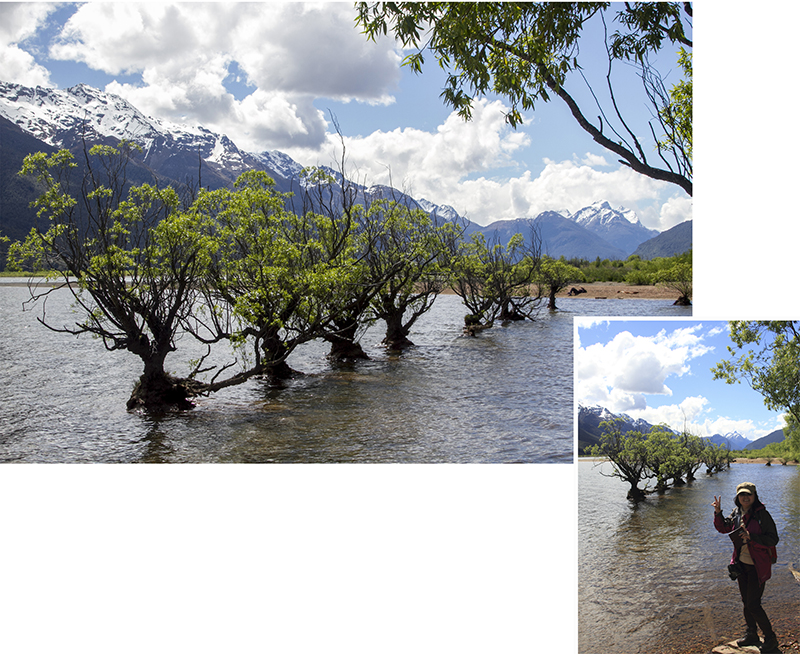 At about 4.30 pm we drove to Glenorchy Cafe which was not too far away from the jetty for coffee break. We were so disappointed when the staff of the cafe told us that the place would be closing in 30 minutes. We wanted some places where we could laze around for two hours. The staff suggested that we could sit outdoor, there we could have our cafe latte leisurely and she would collect the used plate and cup the next day.

Wonderful, we enjoyed the outdoor space. The place was so quiet and peaceful that even the birds came down to perch on the back of the chair next to me. The only issue was tiny insects that bit, so we had to liberally spray insect repellent all over the exposed skins on our body and pulled up our socks to prevent being bitten on the legs. 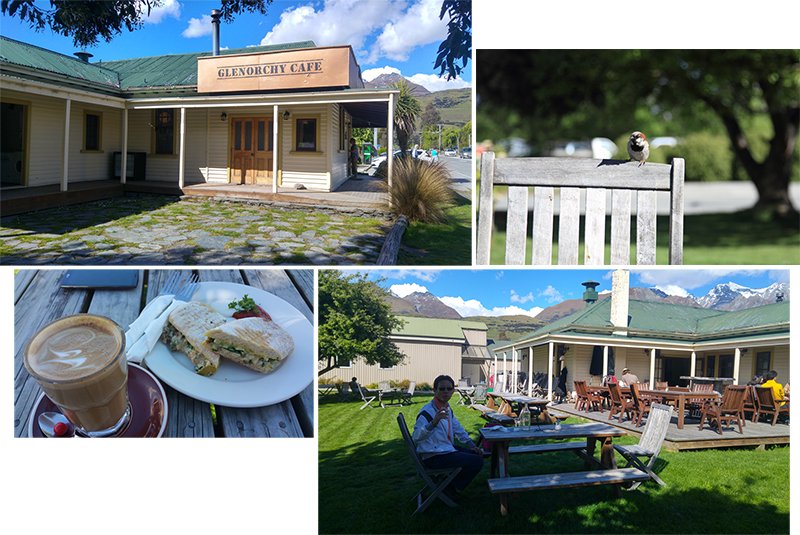 We left Glenorchy Cafe for Bennetts Bluff at about 6 pm, we stayed there till about 8.40 pm before making our way back to Glenorchy Jetty. The jetty and the surrounding was very beautifully blue, it was not so dark yet and we could still see the snow capped top of the mountains far beyond. 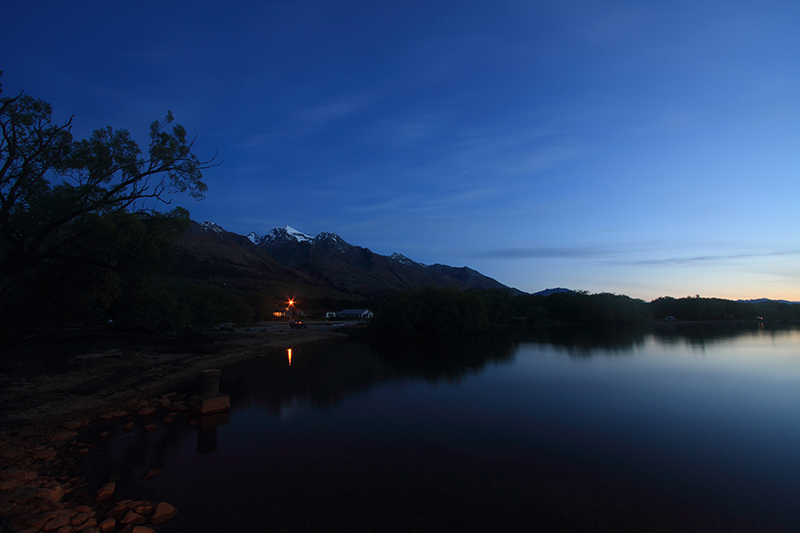 At the jetty we set up our tripods and cameras to take the jetty shots. This jetty was very unlike the other jetties, it had a bright lamp at the end of the jetty and overhead in the dark blue sky was a bright solo star. We tried various composition and Yat Thong came up with an idea that I should set up my camera to take a shot of him taking a shot of me. 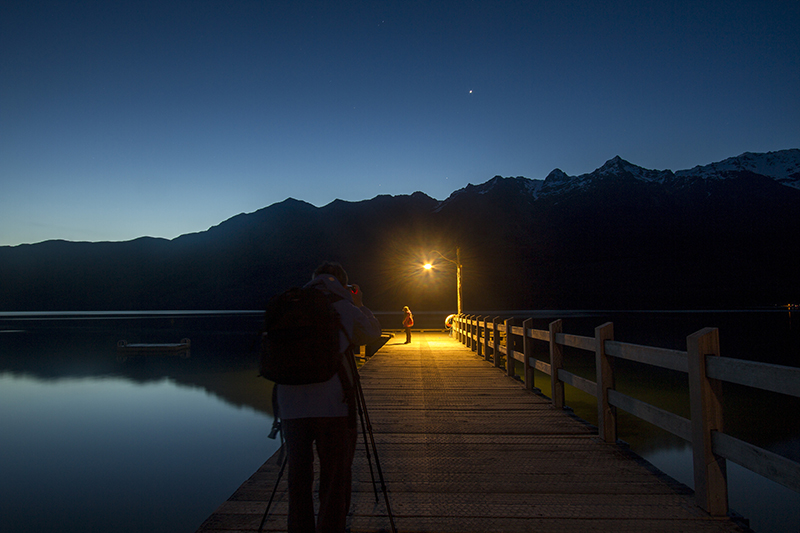 The blue hour did not last long and we had to take as many photos as we could before everything turned dark.  I urged Yat Thong to pose at the end of the jetty staring into the lake. Every shot I took looked different from the earlier one. Soon the mountains could only be seen as dark silhouette against a mysterious blue background. Finally I got my ideal shot! 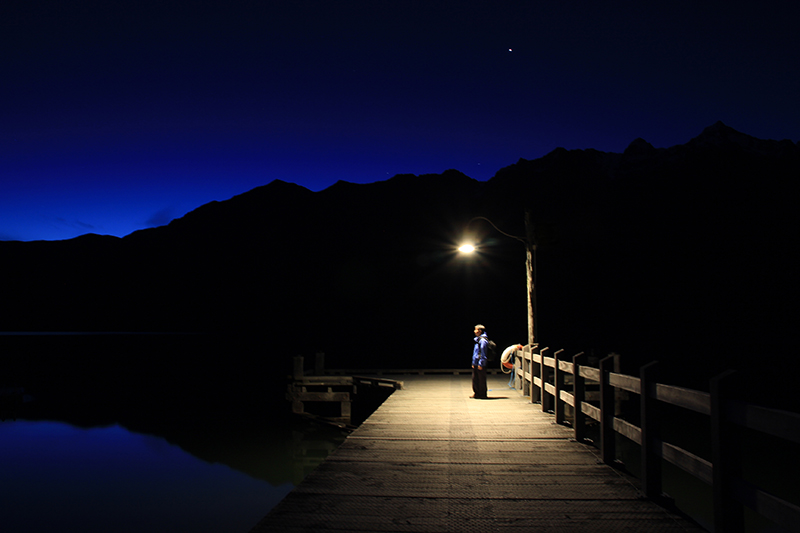