Our plan for the day would be a long drive from Manapouri all the way to the southernmost part of South Island, Slope Point. Along the way we planned for a couple of sightseeing destinations. For the night we had already booked our accommodation at Lazy Dolphin Lodge which was not very far from Slope Point. The driving distance was estimated to be about 250 km. 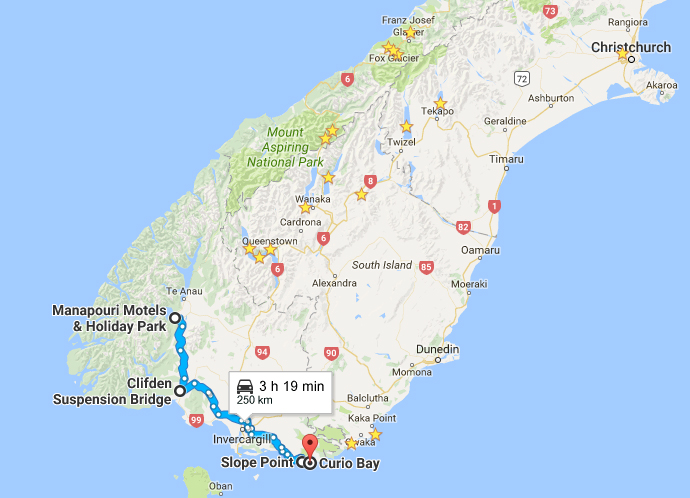 Our first sightseeing stop was Clifden Suspension Bridge near to Tuatapere, after that we drove all the way south to the coast where we stopped at McCracken’s rest of Te Waewae Bay. Next was Slope Point and finally we reached Lazy Dolphin Lodge at  about 7pm, dumped our bags and walked to Curio Bay for some wild lives sighting.

Breakfast was mushroom soup (from a can)  with tuna chucks (also from a can) and garlic bread which I bought two days ago at Ferg Bakery in Queenstown. It was a delicious and cost saving breakfast and it came with a wonderful view of Lake Manapouri. 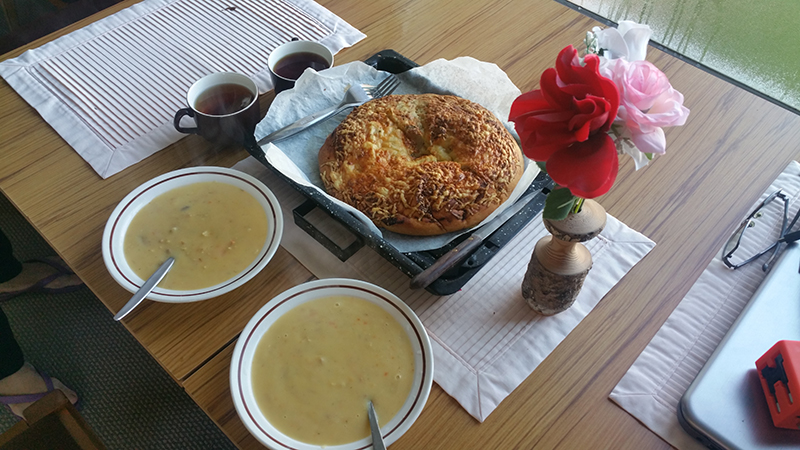 After breakfast we packed our bags, cleared up the motel and drove to the receptionist building to drop the key of our motel unit. That was when we met Joelle. Joelle was the owner of the motel and holiday park, she and her two sons managed this place. It was quite unbelievable that Joelle was already in her eighties. She was very sprightly and her cheeks were so rosy and she definitely looked younger than her age. It must be the beautiful, clean and green environment of Manapouri that kept her young. 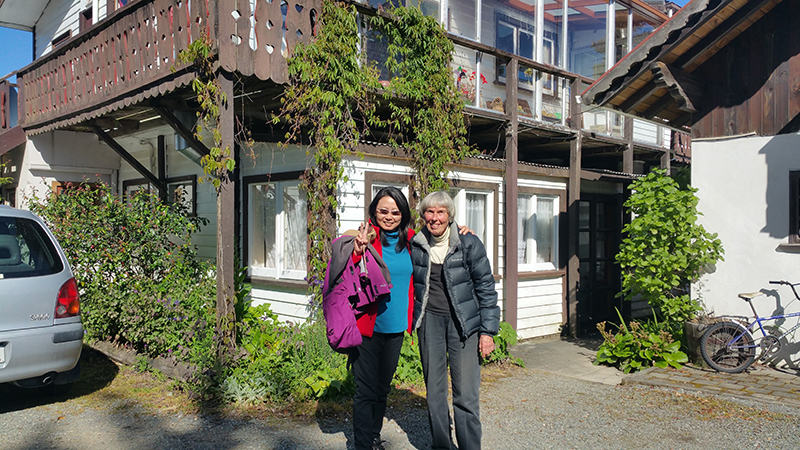 Joelle (owner of motel ) and me

Clifden Suspension Bridge was just a convenient stop for us to stretch our legs after driving for an hour from Lake Manapouri. During the 79 km southward drive there was nothing along the way that captured our interest, it was a boring drive. The only fun we had was whenever we approached a town as we slowed our car down to 50km/hr limit,  we would hunt for Pokestop and Pokegym and played our Pokemon go game.

As we approached Tautapere, we were so glad to see a signboard on the road that pointed to Clifden Suspension Bridge, as it was high time to get out of the car and stretch our legs. 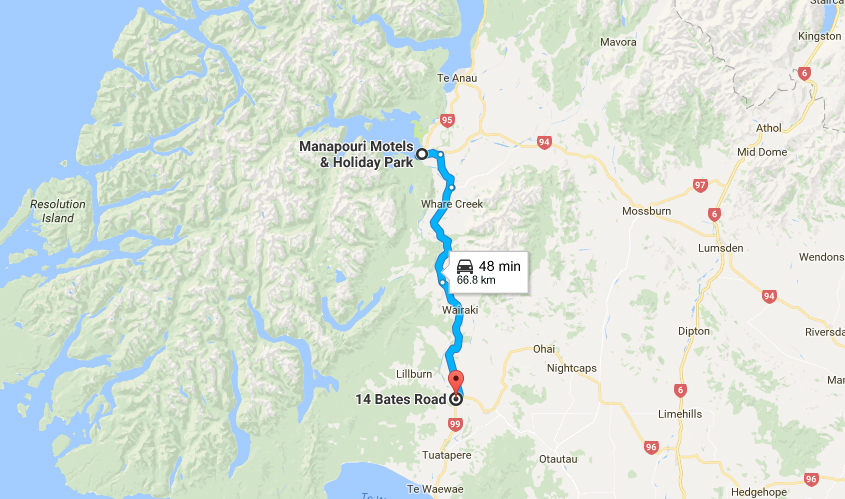 The carpark was just right before the bridge. The weather was fine so we took a walk from one end to the other end of the bridge. Clifden bridge was built in 1899 which meant it was more than a century old. It was a pedestrian bridge with wooden deck suspended by steel cables over concrete pillars. 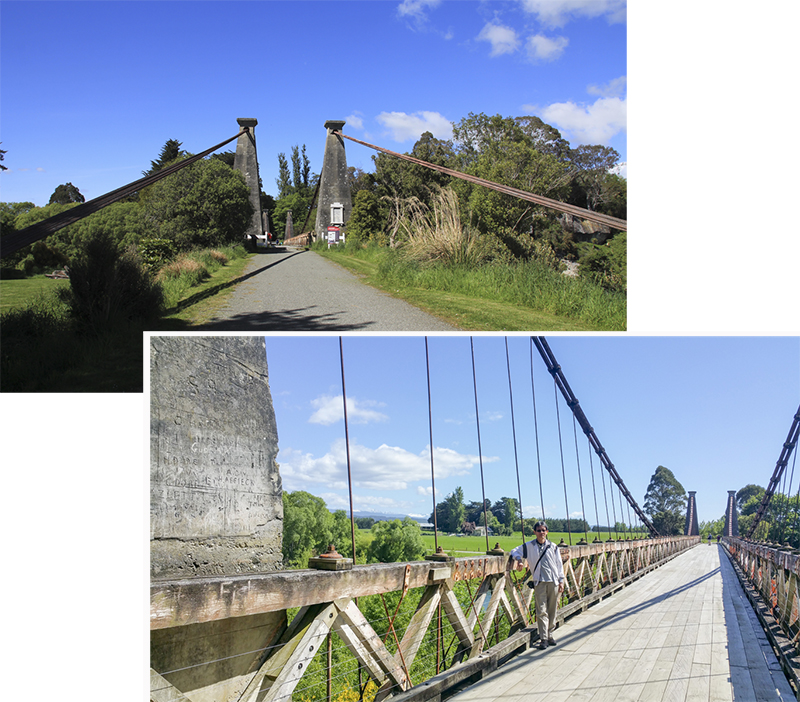 After Clifden Suspension bridge we continued our driving southward for about 25km and reached Te Wae Wae Bay. A good view point of the bay was at McCracken Rest.

The bay was huge, so very wide that we could not see the curves at its two ends.  It was a lovely place to stop to feel the wind, smell the sea and see the waves rolling in continuously. Someone should set up a simple cafe here so that visitors could sit comfortably here and admire the magnificent view for hours. 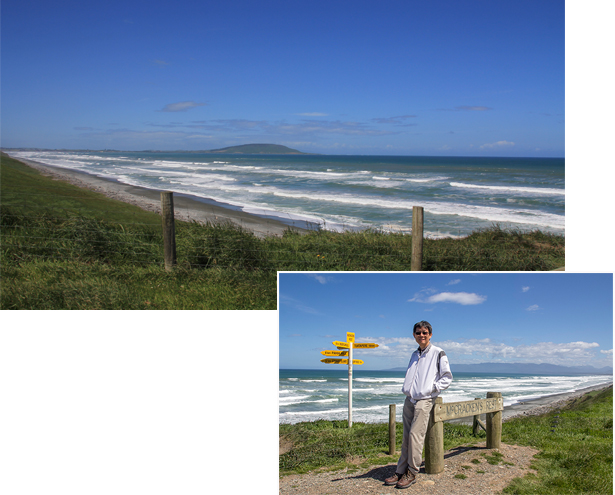 One of the larger town along the southernmost of south island was Invercargill town and it was along our way to Slope Point. We drove into Invercargill town, moved along the main road looking for a cafe stop. It looked like any typical town, nothing interesting, a quiet town. The most interesting architecture we came across was a huge brick tower which was surrounded by thick brick walls. We thought it could some sort of a prison until we drove nearer and saw the sign. It was a water tower! 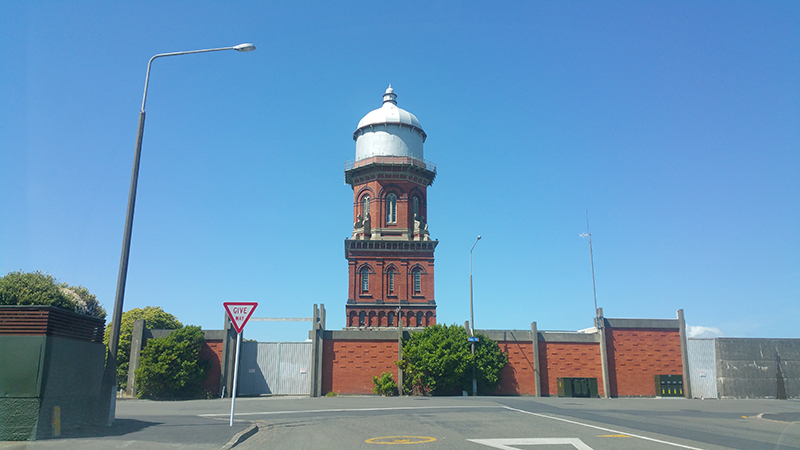 Slope Point was 74 km from Invercargill, we drove for about an hour to get there, along the way we passed some steep road and some unpaved road. Slope Point was the southernmost point of South Island. 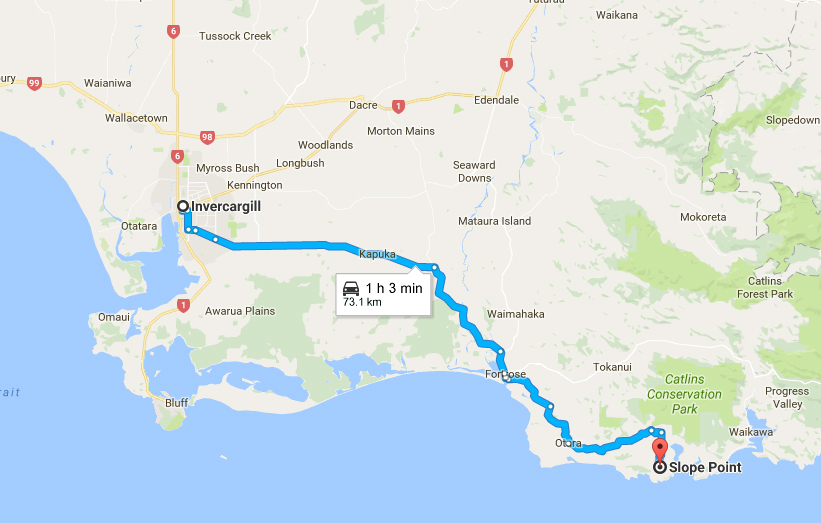 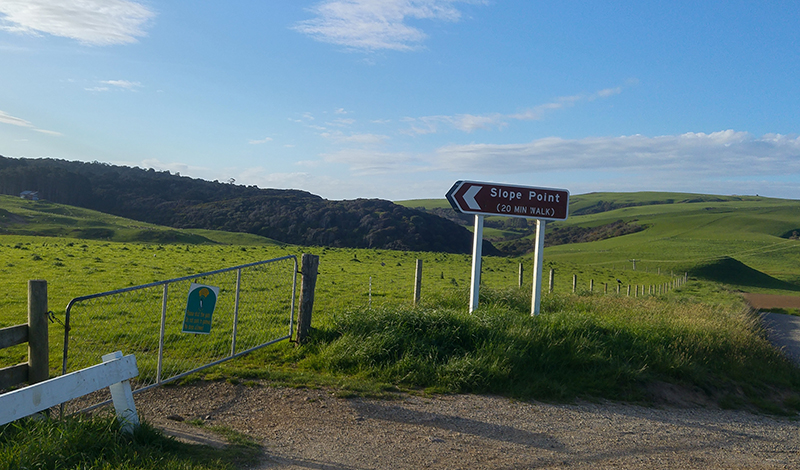 Signage pointing to start of walk to Slope Point

These trees were still alive but they were tilted down practically to the ground. The winds must be ferocious at certain parts of the year to have bent these trees to such angle. During our visit the wind condition was pretty mild. 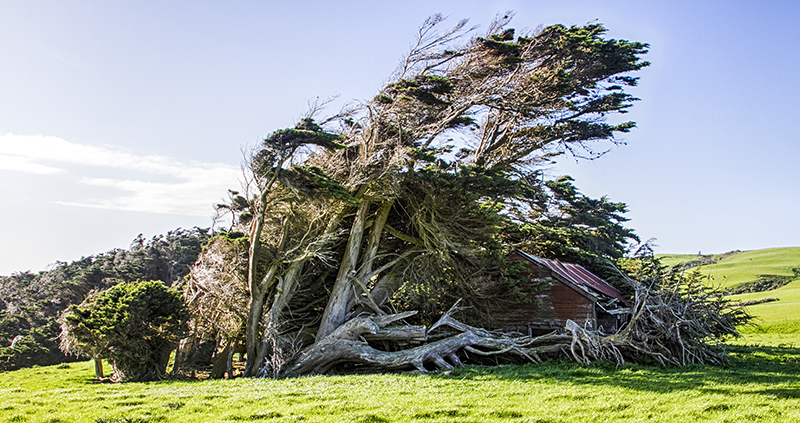 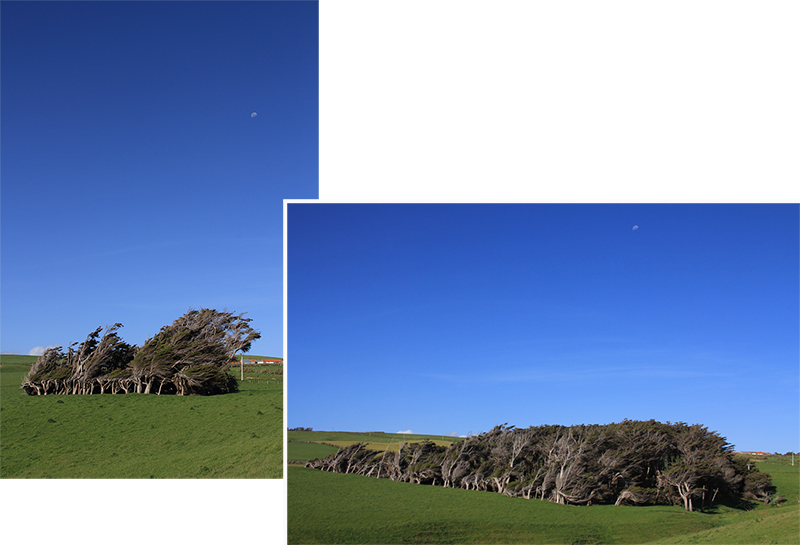 The signboard of Slope Point indicated that it would be a 20 minutes walk to Slope Point view point. So we started our walk generally in the direction of the arrow. There was no obvious path on the land (private land), the land was very wide and far and it stretched all the way outward to where we presumed was the sea.

As we walked on, the land turned from green to straw brown. There were thousands and thousands of tussock bundles all over the land. When the wind blew, all these bundles would lean to the same direction as though they were alive, obeying the instruction from a higher order. 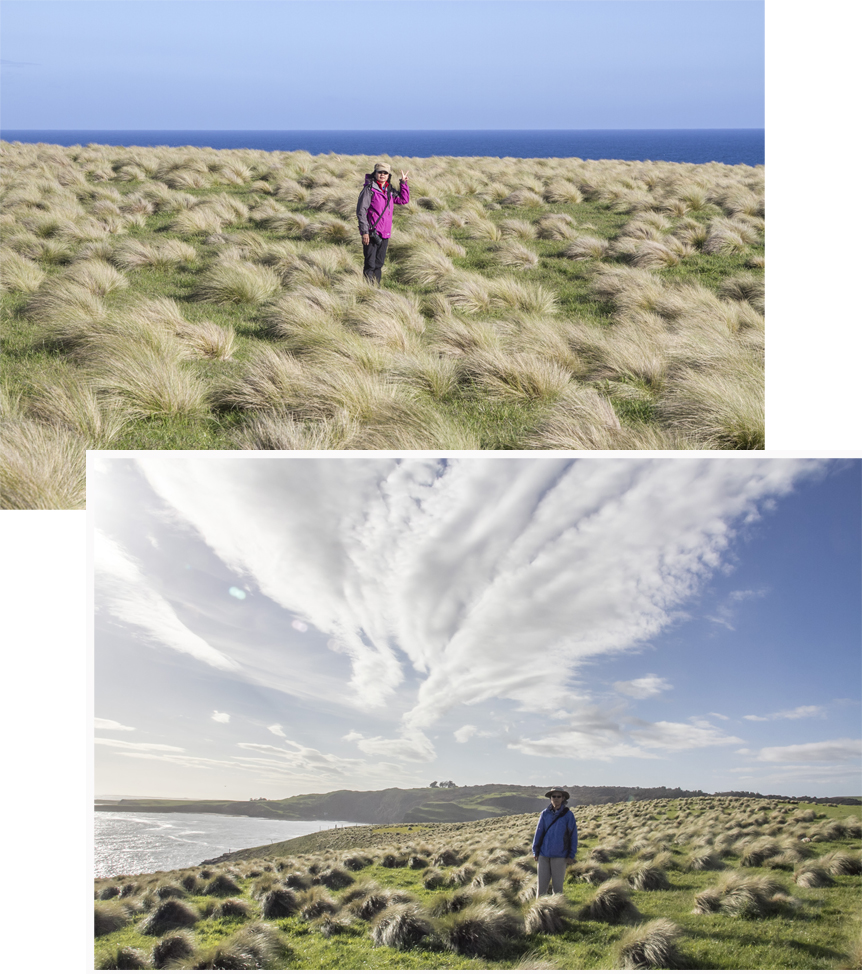 After about 25 minutes of walking we reached a sign that said Slope Point. We thought this must be the southernmost end of New Zealand. The ocean (Tasman Sea) in front stretched all the way to the horizon, probably at the end of the horizon and further was the South Pole. 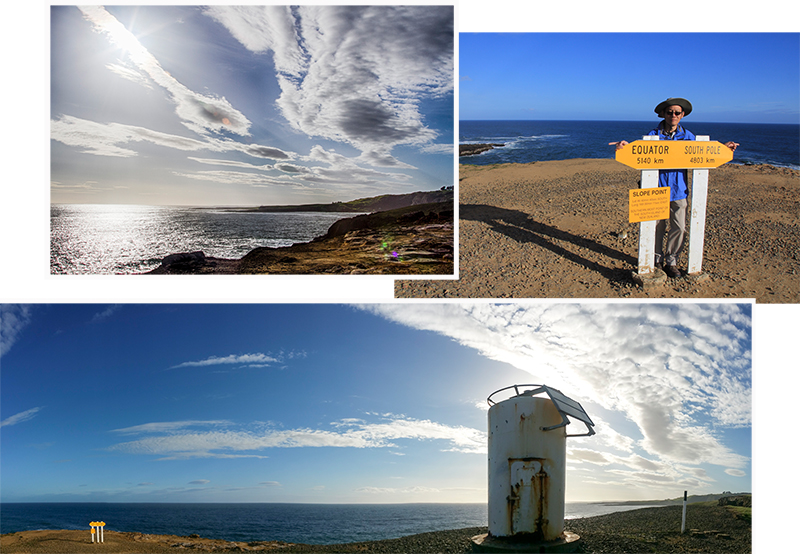 We had two options to either stay at Slope Point to view the sunset or to go forward to Curio Bay/Porpoise Bay to see penguins/dolphins before it was too dark to see anything. Penguins would usually return to their nests when the sun was about to set.  We had seen many beautiful sunsets during our travels so we decided we could give Slope Point sunset a miss.

The drive from Slope Point to Lazy Dolphin Lodge, our accommodation for the night, was 15.5 km. We had selected this lodge because it was just in between Curio Bay and Porpoise Bay. 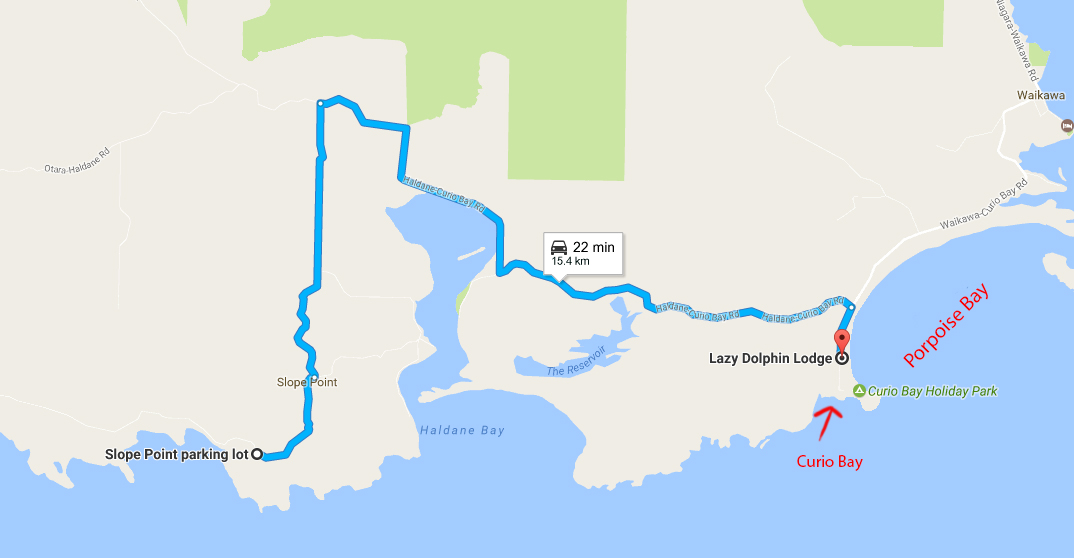 We left our car at the lodge and walked down the road to a nearby beach. We were told by a fellow lodger that at sunset penguins could be seen returning to their nests. We walked about 400 m down the road and turned right and walk for another 200 m before we arrived at a car park. A signboard at the carpark showed that we were at the start of the Curio Bay Walkway. According to the information on the signboard, at Curio bay we would be able to see the rarest pengiun, Hoiho/Yellow Eyed Penguin, in the world. 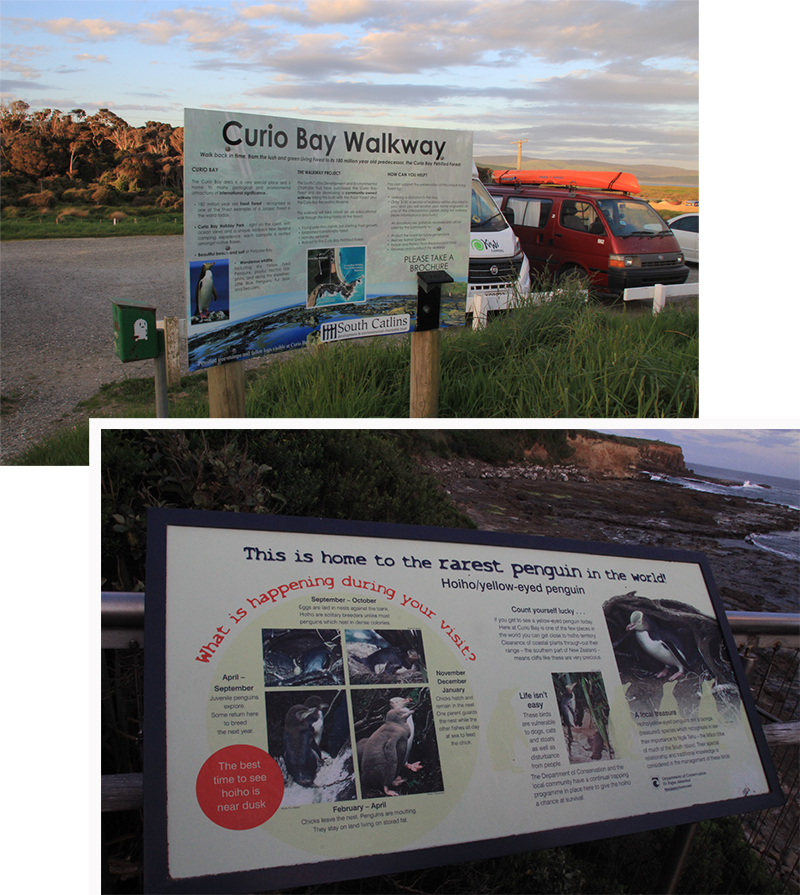 A short walk from the carpark brought us to a viewing deck. The deck overlooked the rocky and murky beach some distance below. Though a stair led all the way down to the beach, we just did not feel like going down to the brown and ugly beach. Anyway from the view deck we could see a lot more wider which made it easier to spot any returning penguins. After a while, somebody beside me pointed to a tiny penguin far away walking from the sea to the rock.

Though the lens of my camera, I was able to zoomed into the penguin and had a better view of the animal. It was a tiny creature with  a single yellow stripe across its head that looked like a long eye mask. 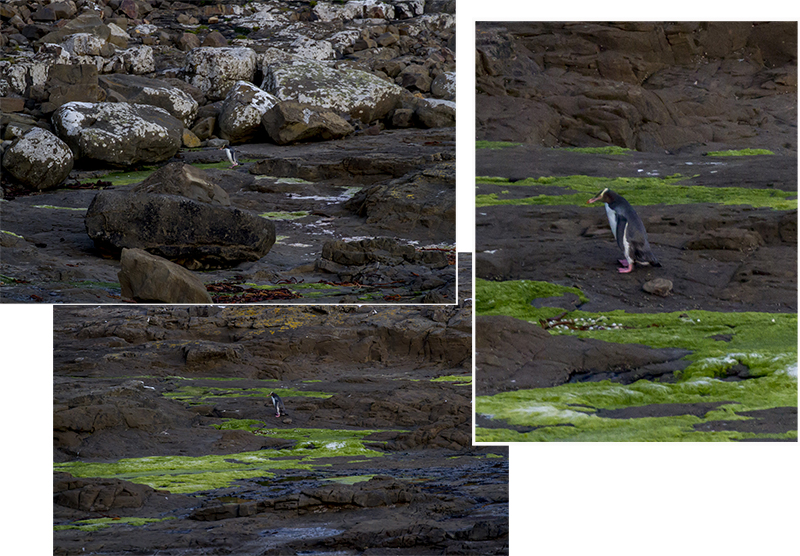 Earlier on, when we arrived at Lazy Dolphin Lodge at about 7 pm there was no staff around at all. We let ourselves through the big glass door that opened into the office. The only evident that this lodge was aware that I would be arriving today was my name written on a huge black board.

We were wondering how should we get in touch with a staff to process our checking in when Wendy walked through the glass door. Wendy was another lodger who arrived earlier in the day, she basically told us that there was no staff around. Our room would be the one indicated on the board just on the left side of my name. Oh.. okay, self check-in, cool. 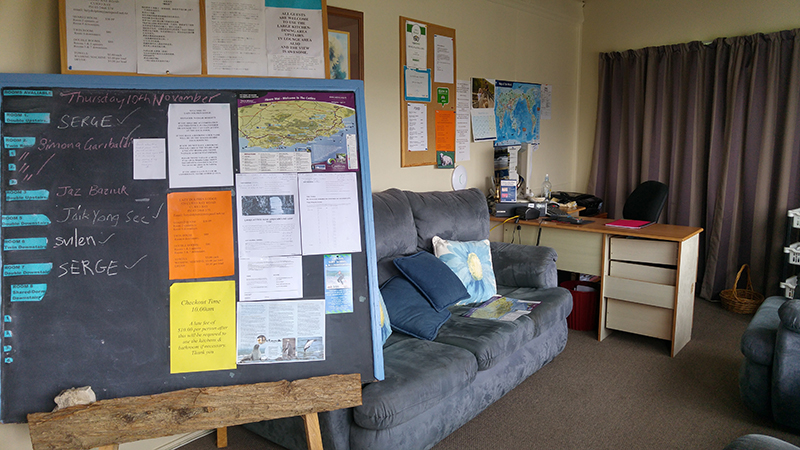 Our room was small with a queen bed in the middle of the room there was hardly any walking space. At least the room and bed looked clean. The room did not come with ensuite toilet and the cost was NZD $90 per night. The lodge had two levels, our room was one of the five rooms on the lower level. 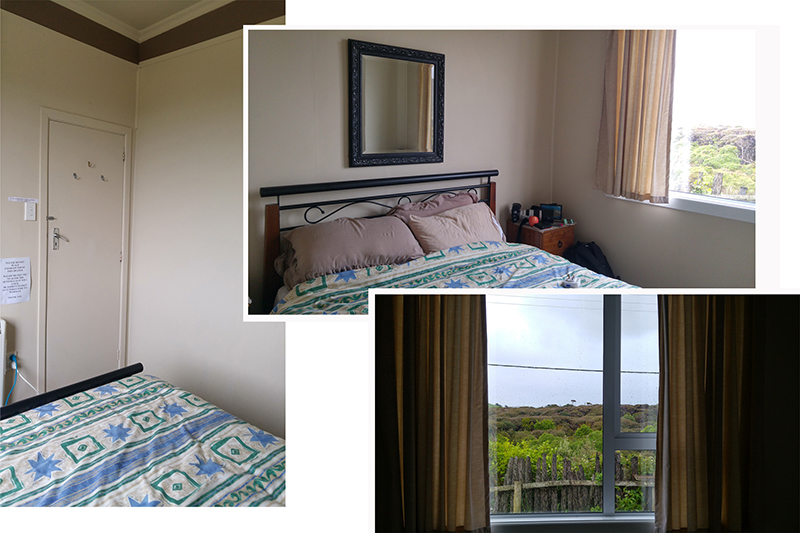 We selected this lodge because of its proximity to Porpoise Bay and Curio Bay where dolphins and penguins were frequently spotted. Beside the room charge was inexpensive, though I would gladly pay more for a room with ensuite toilet but this lodge had none of such room. 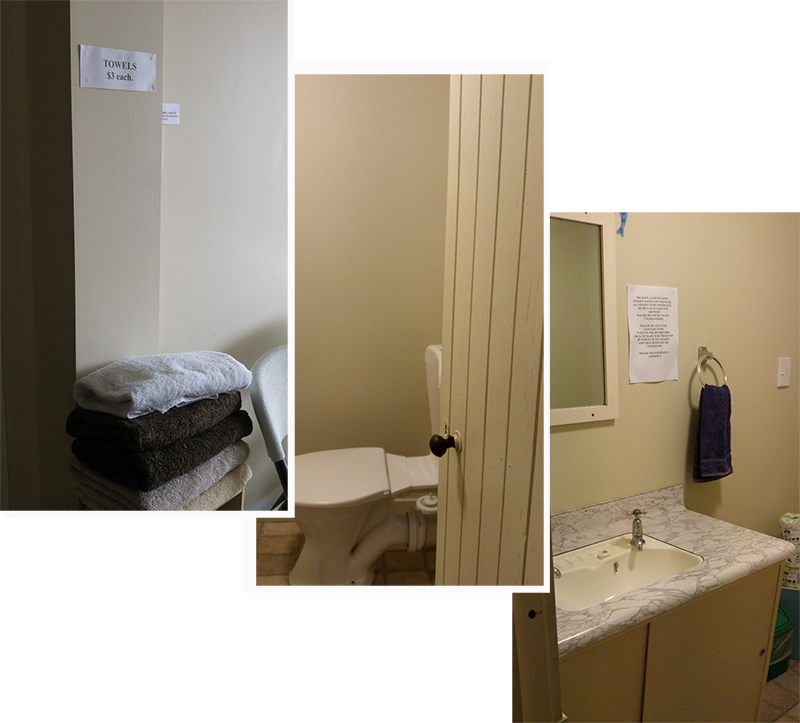 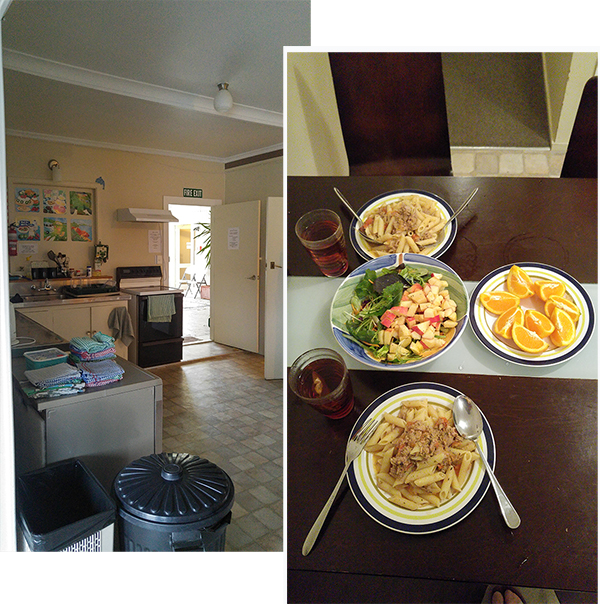