We had planned for only one sightseeing destination for the day and that was Kravica Falls on the Bosnia & Herzegovina side. For the night we would stay at an apartment near the Kravica Falls. The driving distance would be about 135 km and take about 2 and a quarter hour. 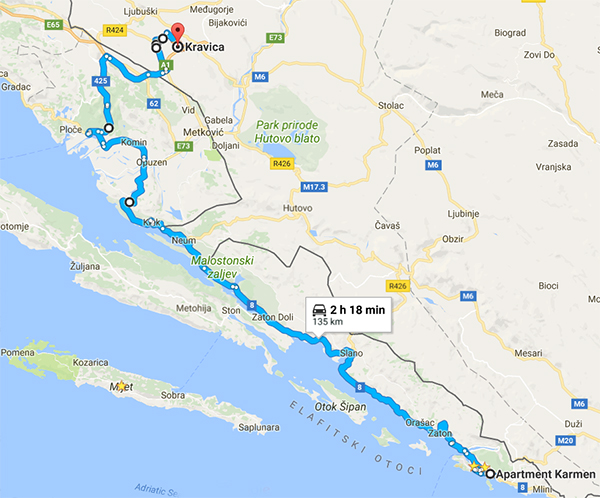 We took a leisurely drive and reached the border between the Croatia and Bosnia & Herzegovina at about 12.30 pm.  This was our fifth crossing for this trip and for the very first time the customer officer (Bosnia & Herzegovina) asked for our rental-car-cross-border-pass. We showed it as per his request and crossed the border without any issue. As we understood the pass was to show that our Croatia rented car had all the necessary insurance to travel on foreign roads.

Dubrovnik in the Morning

Normally we would leave our hotel/hostel/apartment by about 9 am in the morning. But today was an exception. The view from our apartment was so lovely that we wanted to stay on as late as possible. Check out time was supposed to be 10 am but we did not leave until after 11 am.

Cooking breakfast in Apartment Karmen kitchen was pretty easy as it was well equipped with all the appliance and utensils I needed. Cleaning and washing up was also a bliss with the help of dish washing machine. 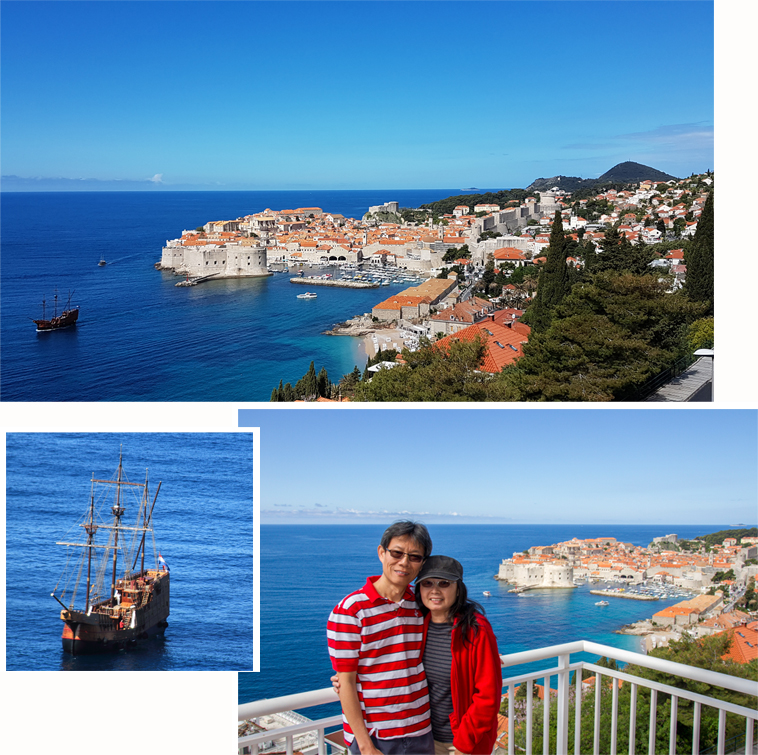 We arrived at Kravica Falls at about 1.30 pm that was when we reached the entrance to the park of the falls. There was a barricade at the entrance and a ticketing staff told us that we could not drive the car into the park. We were directed to a huge car park a short distance before the entrance. There was a cafe just at the car park too. 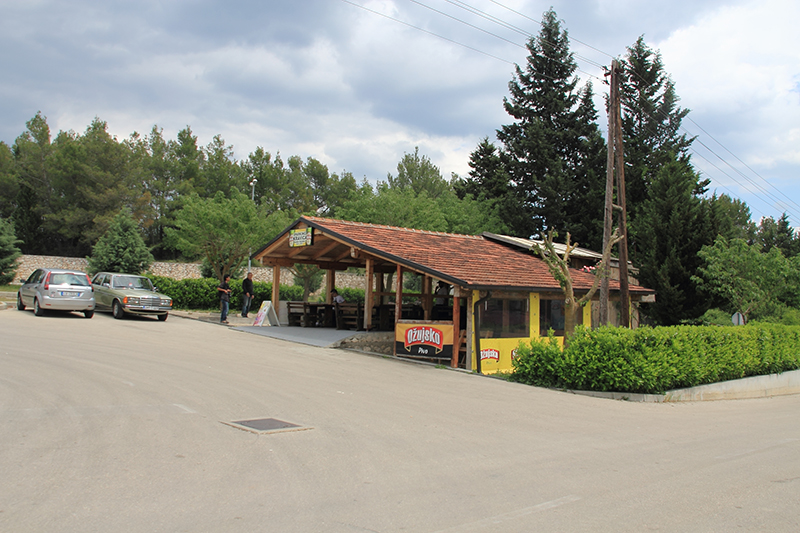 Parking was for 1 BAM and admission to the park was at 4 BAM (SGD$3.20 or €2) per person. Parking charges and admission tickets were for the entire day which meant we could leave Kravica Falls and check into our apartment (about 350 metres from the entrance)  and return again later using the same tickets for some evening sightseeing.

From the entrance there were two routes to the falls. We could either walk along a road which was a longer route to the falls or take a shorter route that involved steps that went directly down to the falls. 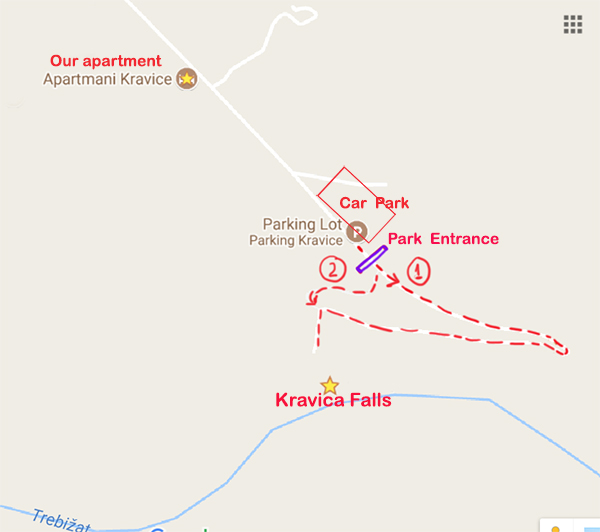 Map of Kravica Falls and its surrounding

We took the longer route as the distance was about 800 m, not too long and we had plentiful of time on hand. The longer route was on a gentle slope with a proper foot path. There were several good lookout sections along the foot path where we had a good top down view of Kravica Falls. From the top, it looked like water just emerged from the forest and spilled down into a large cavern in the ground. 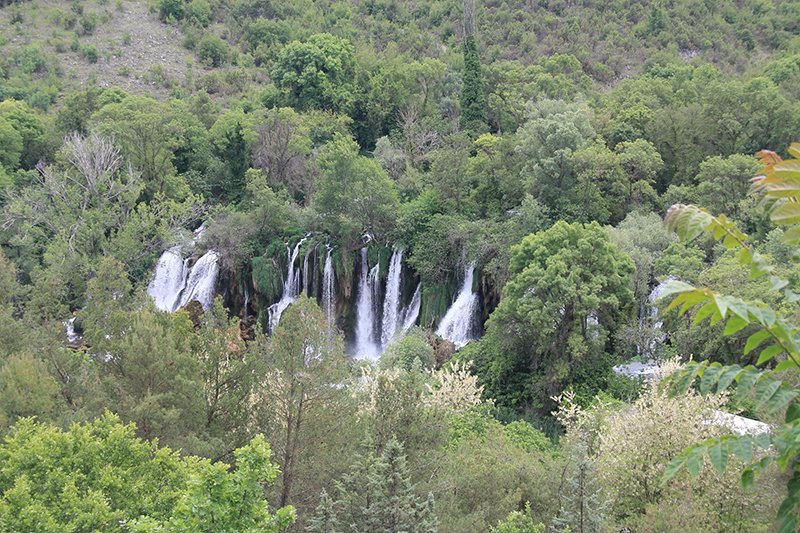 Though the sky was gloomy and a very light drizzle filled the air intermittently it did not prevent us from enjoying our walk. The walk down the longer route to the Kravica Falls let us view the falls at different angles and heights. 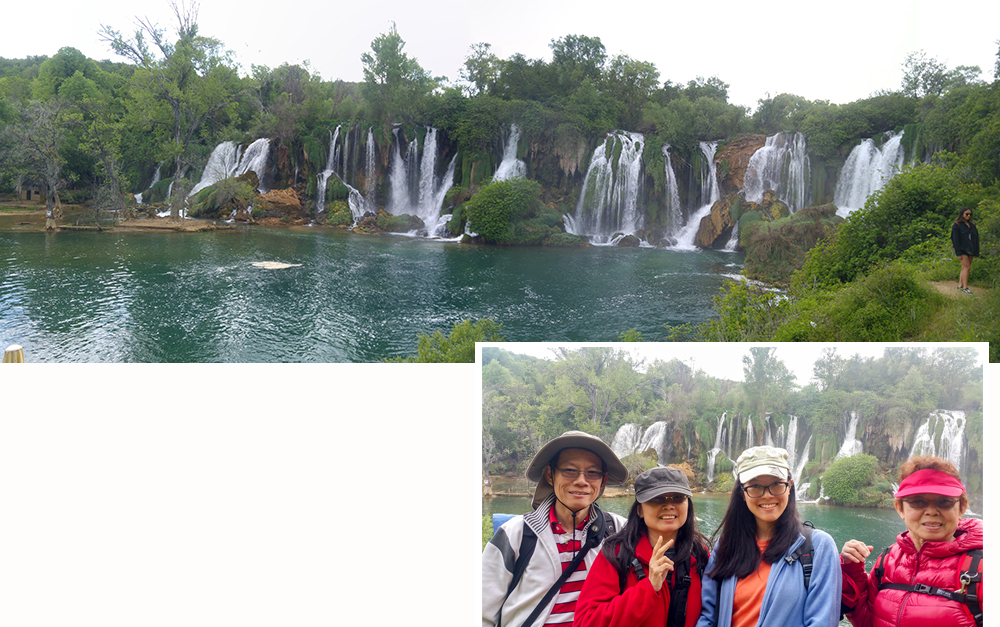 After half an hour of slow walk we reached the base level of the falls. The falls looked as beautiful at the bottom as from the top. From the ground level, it looked taller and wider, its looked like a series of many falls side by side forming an arc. The falls was about 25 m high and 120 m along the arc. 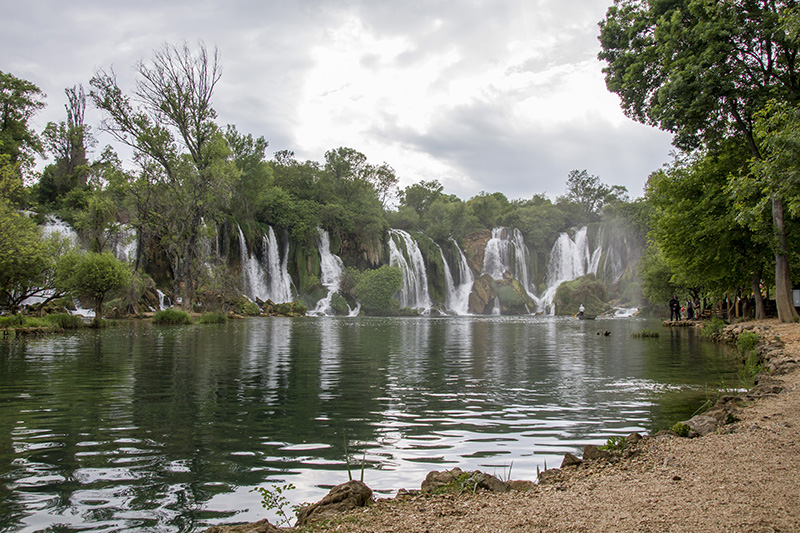 Kravica falls as seen from the base

Surprising we saw swimmers in the water. There was a family swimming! Amazing, the weather was cold and the sun was hardly visible and these brave people were submerged in icy water. We asked one of the swimmers how was the water and she said that it tasted muddy! 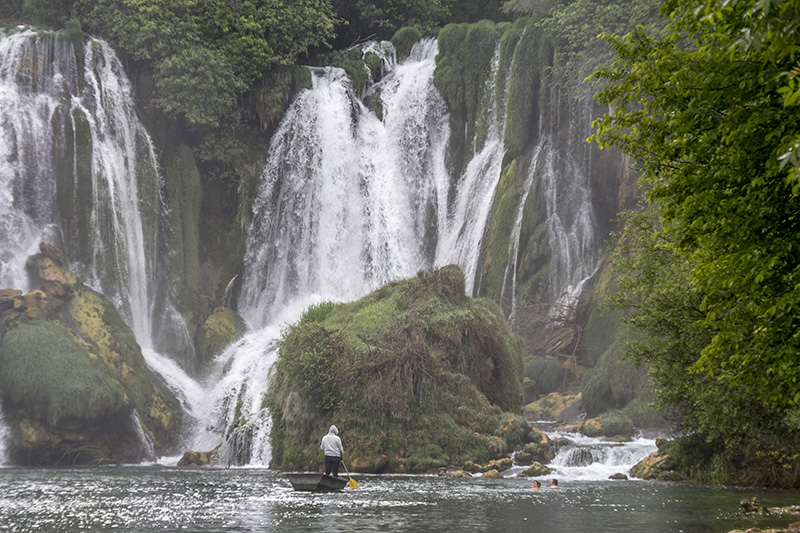 We decided to have a different “chilling session”, hot drinks and ice creams. There was a cafe at the base of the falls. It was a pleasure to sit and sip coffee and enjoyed the view of the falls. The time was only about 3 pm and we did not have another destination to go for the rest of the day.  One thought was to stay at the cafe till dinner time and eat our dinner here. But after 1 hour we decided to move on. 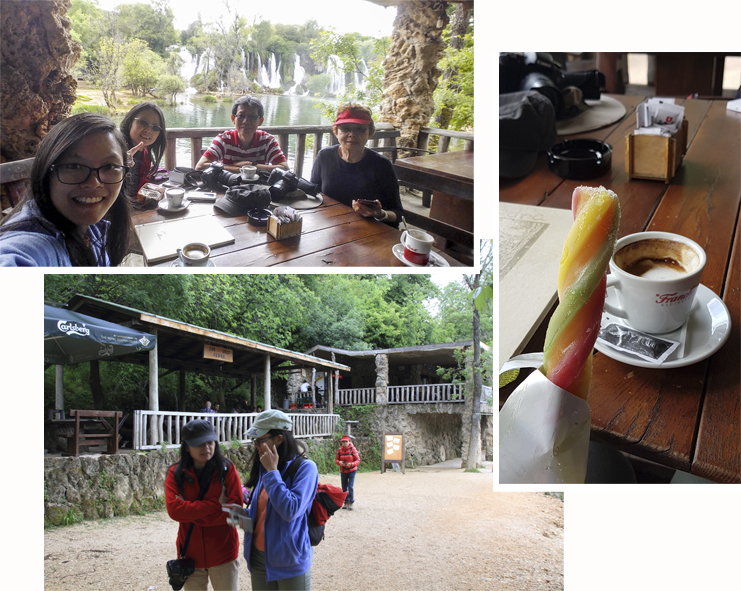 We got in contact with the owner of Apartment Kravica, our stay for the night. She only spoke Bosnian so I got the Bosnian cafe waitress (who could speak English) to find out when we could check in. Our hostess told us that she lived just above our rental apartment and we could drop in anytime. We went back to the park entrance via the shorter route which was the steep stairs to the top. 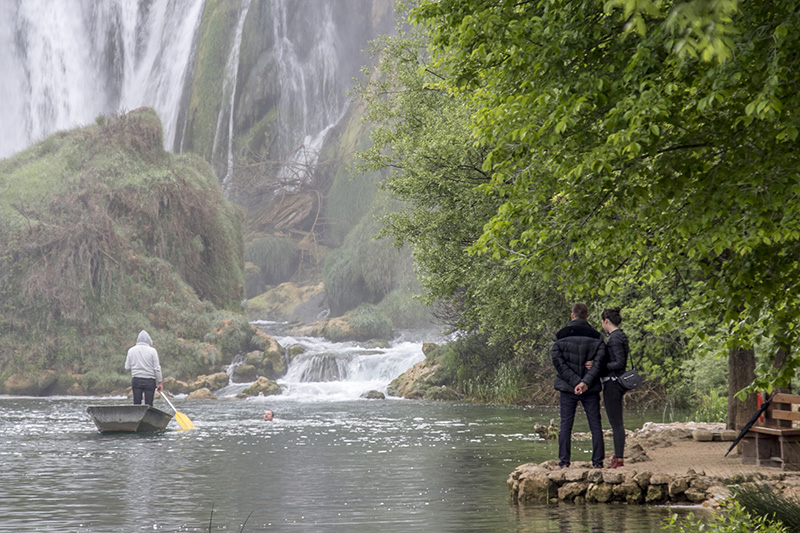 After checking in at Apartment Kravica we drove 8 km to the nearest town, Ljubuski, for dinner. It was not easy looking for a place for dinner as the drizzle had started again. We managed to made do at a pizza place and ordered two large pizzas. The cost for the pizzas and coffee costed 26 BAM (SGD$20 or €13). Generally eating out in Bosnia & Herzegovina was much less expensive than in Croatia or Slovenia. 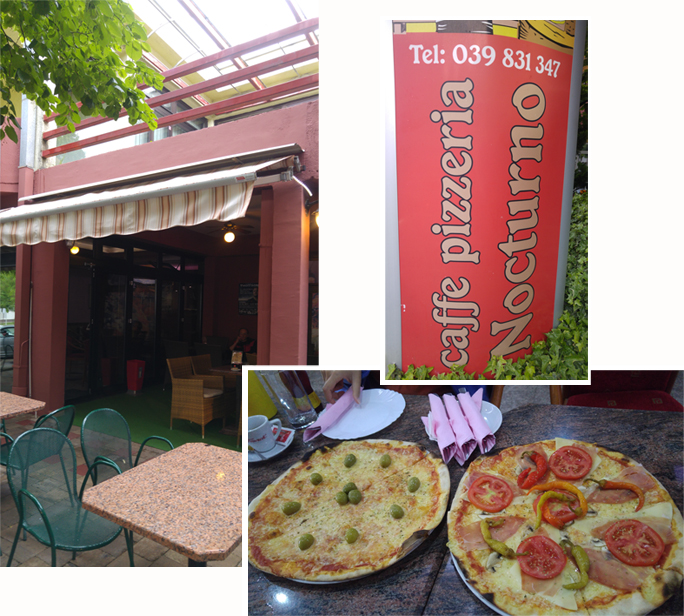 We were back at Kravica Falls by about 7.30 pm. It was great that the drizzle had stopped and we hoped to get some great shots of Kravica Falls as the sun set and during the “blue hour”. At 7.30 pm the park had already closed. But since the park entrance did not have a gate we could just walk in. There was no lamp in the park, so we should not stay too late as it would be too dark to move around when the sky darkened. We only planned to stay on the sidewalk on the upper road near to the entrance and watched for the sun go down.

The sunset was not nice at all because the sun was behind the clouds all the time. But once the sun had set and the sky started to turn blue, the scenery improved by the minutes. Kravica Falls was lovely in the “blue hour”. 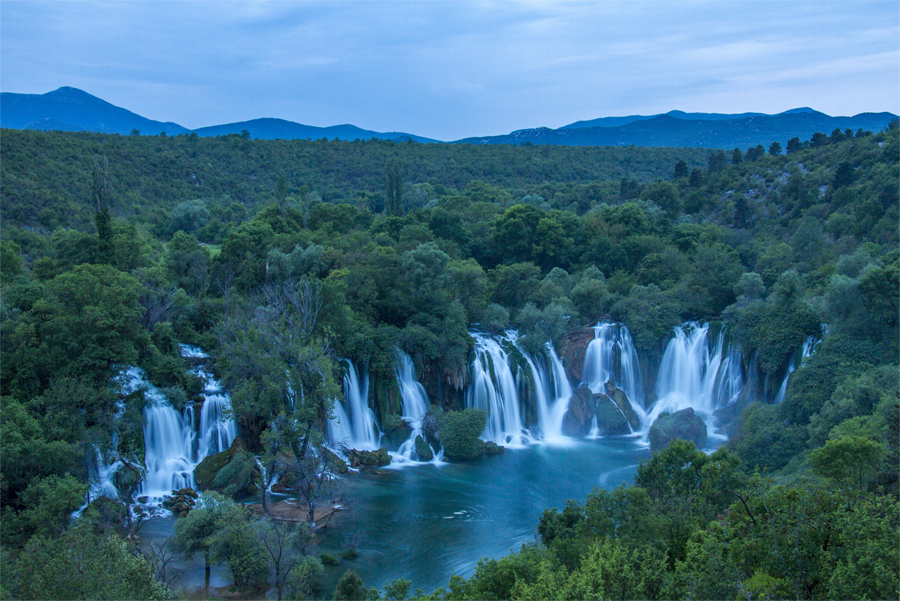 We drove to Apartment Karvica (Apartment Karvice) based on the co-ordinates that we were given. But at the location we just could not find it. The house just looked different from the picture that we had. We saw the owner in her garden patch picking something. We called out and the lady waved us into the house. We had got the right place but it looked different because of some recent renovation works. 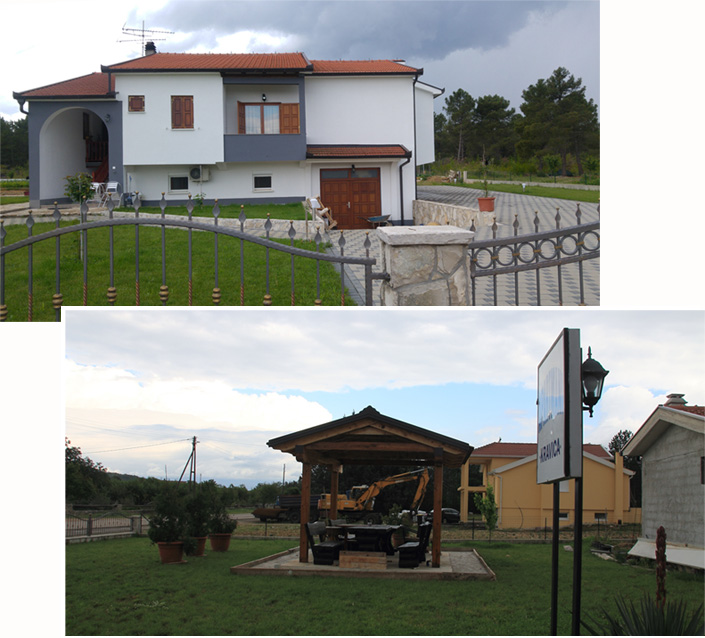 The house had two levels, our apartment was on the lower level whereas the upper level was occupied by our hostess and her son. There were two “apartments” on the lower level, one facing the front the other the back. The apartments were a few steps below the ground level which made the back apartment a bit dim so I requested our hostess to let us have the apartment facing the front garden as it was brighter and had larger windows. 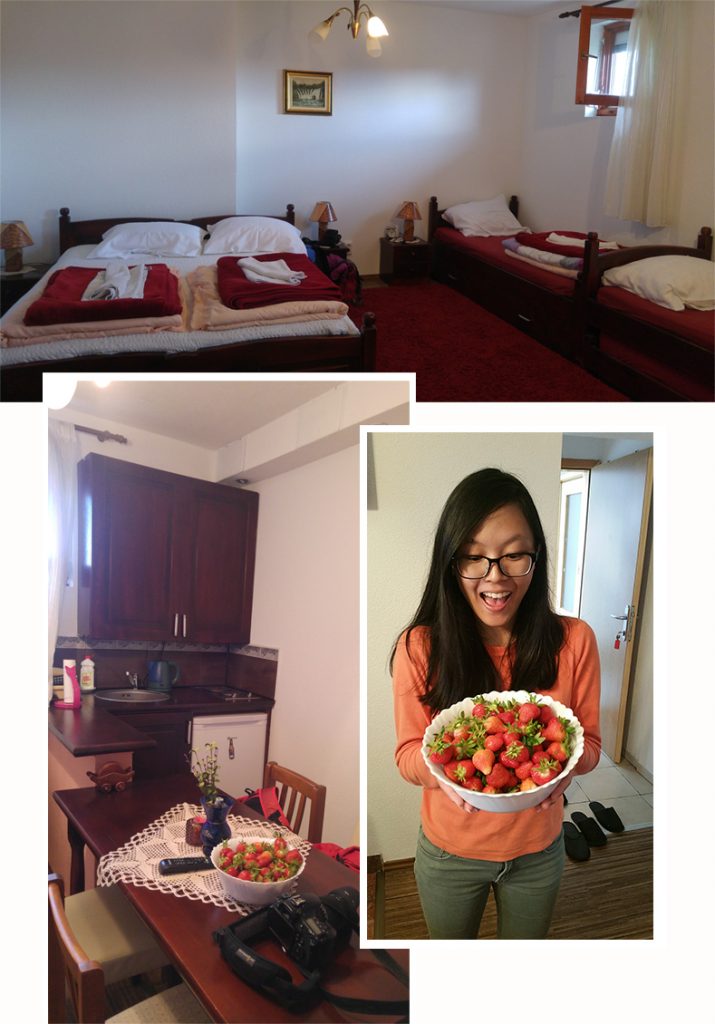 Our apartment had one double bed, two single beds and two pull-out beds. It could actually sleep six persons. In the room there was a small kitchenette with fridge, cooker, sink and kettle. The “apartment” had a small ensuite toilet. This apartment was reserved on booking.com and its cost for one night was BAM84 (SGD$65 or €44).

Our host was very hospitable, she told us we could use the toilet in the back apartment as there was no other people renting it. She was so nice that she gave us a huge bowl of strawberry that she had just plucked from her garden patch. That evening we had a great fruit supper. 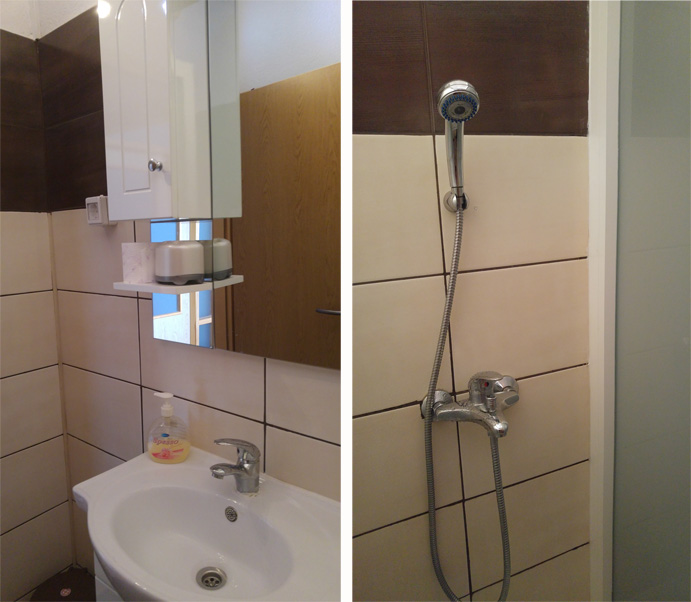