Our original plan was to get to HeiShui (黑水) from TangKe after staying two nights. But the construction mess in TangKe (唐克) had made us fled the town early in the morning after the first night. For the second night (last night) we stayed at HongYuan (红原)  which was midway between TangKe and HeiShui.  Today we would travel to HeiShui, the distance between HongYuan and HeiShui was 152 km, the bus journey would be about 3 hours. We expected to reach HeiShui at about 3 pm. 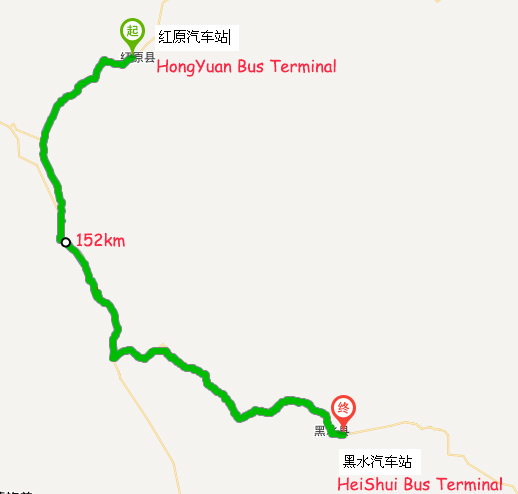 End of the Day
We left HongYuan at 12 pm and reached HeiShui just after 4pm. The bus journey was rather slow taking close to 4 whole hours. It was another “transfer day”, a non-exciting day, a day of waiting to start our journey in the morning and then rocking through a 4 hours bus ride. By the time we reached HeiShui it would be too late for any serious sightseeing. The only excitement was in the evening time when we got down to have a beef hotpot dinner in HeiShui Town.

The breakfast room was a huge hall with a stage, this was not the same hall where we ate our dinner the evening before. There were many round tables and chairs in the middle of the room and a breakfast buffet spread at one end of the room. This was the first time we saw so many guests at a hotel, apparently the hotel was hosting a conference. 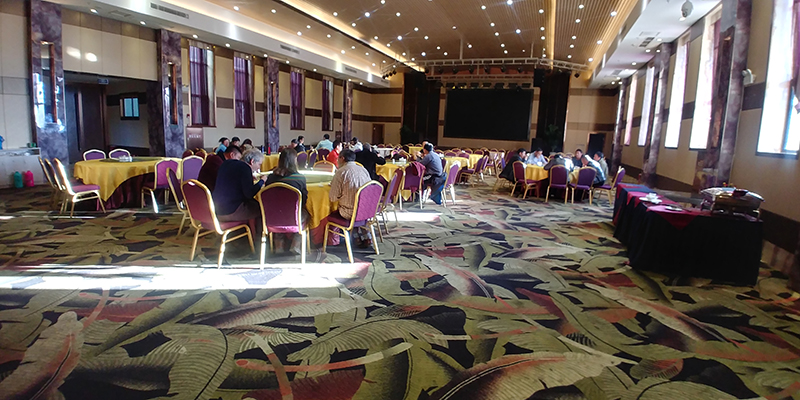 On first thought it seemed to be a good breakfast but after inspecting all the dishes at the buffet table,  I found them to be of the same non-appetising hotel-breakfast that were served by the various hotels we had stayed. At LiWan Spa Resort we got more selection of  unappetising dishes than the other hotels. 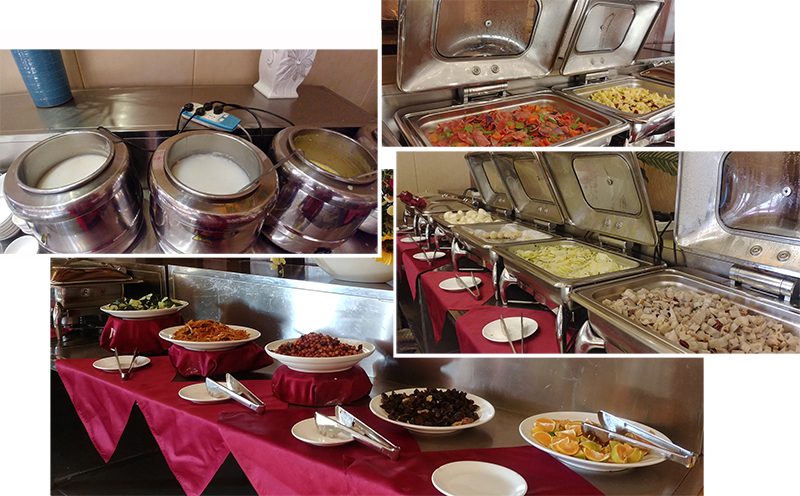 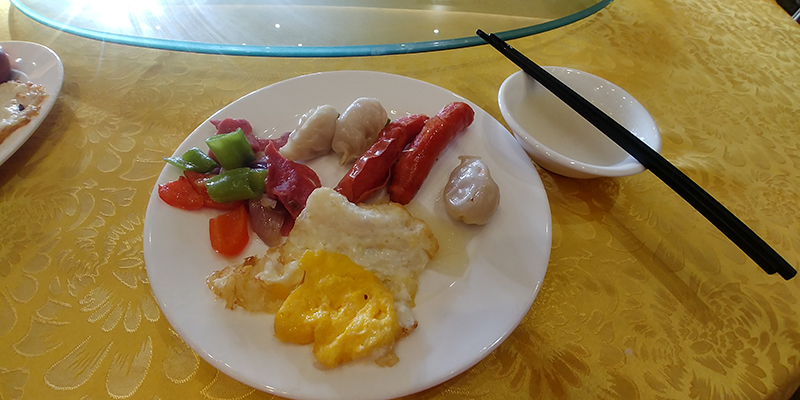 My oily and tasteless breakfast

We reached the HongYuan Bus Station 20 minutes before time. At the bus bay we found our bus which was a mid-size bus that had a signboard that said RuoErGai <-> HongYuan <-> HeiShui. 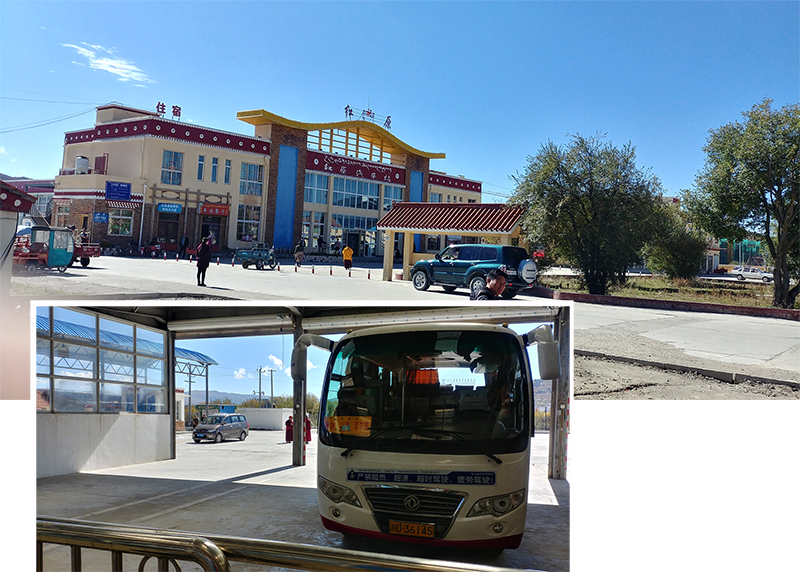 The bus did not seem to have a bottom-holding area for luggage and the driver told to bring our bags up the bus. The front of the bus just behind the driver were already packed with boxes, probably stuff that the driver intended to deliver. After some reorganising we were able to squeeze our luggage among the boxes. 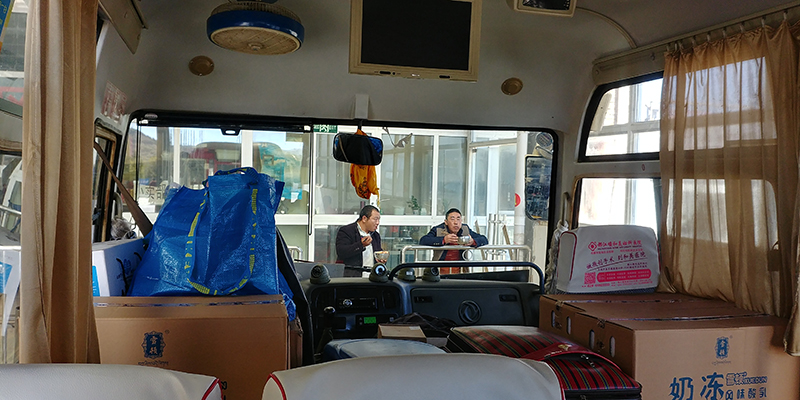 The front of the bus was packed with box and luggage

As usual the bus made many stops along the route to pickup packages from locals that flagged it down to request for delivery services. Mid way on the journey there was a police checkpoint and our bus driver went down to the police van to show some documents before proceeding on with our journey. 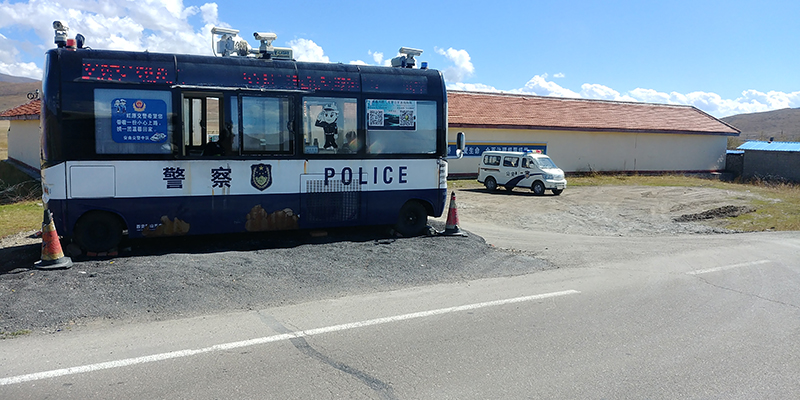 The bus journey was rather boring. Long stretches of decent tarred road with nothing much to see  on both sides. Nearer to HeiShui we passed a tunnel and then started the road started to wind downhill. The trees in the valley were mostly green and dull yellow. It seemed that over here we were also too early for autumn colors. 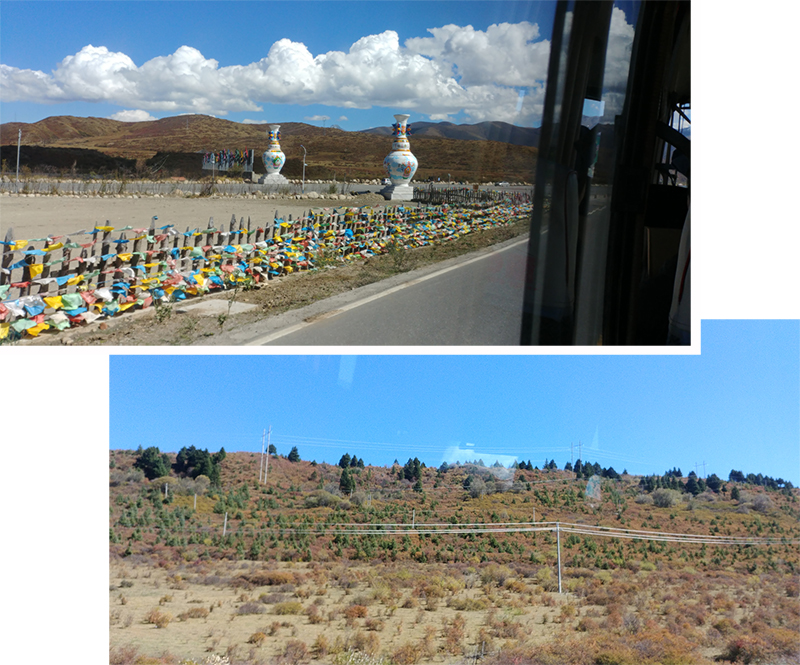 Enroute to HeiShui from HongYuan

About 30 km from HeiShui the bus brake systems seem to be “failing”. As the driver braked while going downhill the brake made a sharp “queaking” sound. The bus driver stopped at a water stop to hose the wheel/brake to cool it down before continuing our journey.

Our hotel in HeiShui was about 2 km from the HeiShi Bus Terminal, looking at the BaiDu Map there was a possibility that the bus might pass the front of our hotel. So prior to the start of our journey we checked with our driver and he told us that he would alert us and let us alight at our hotel. 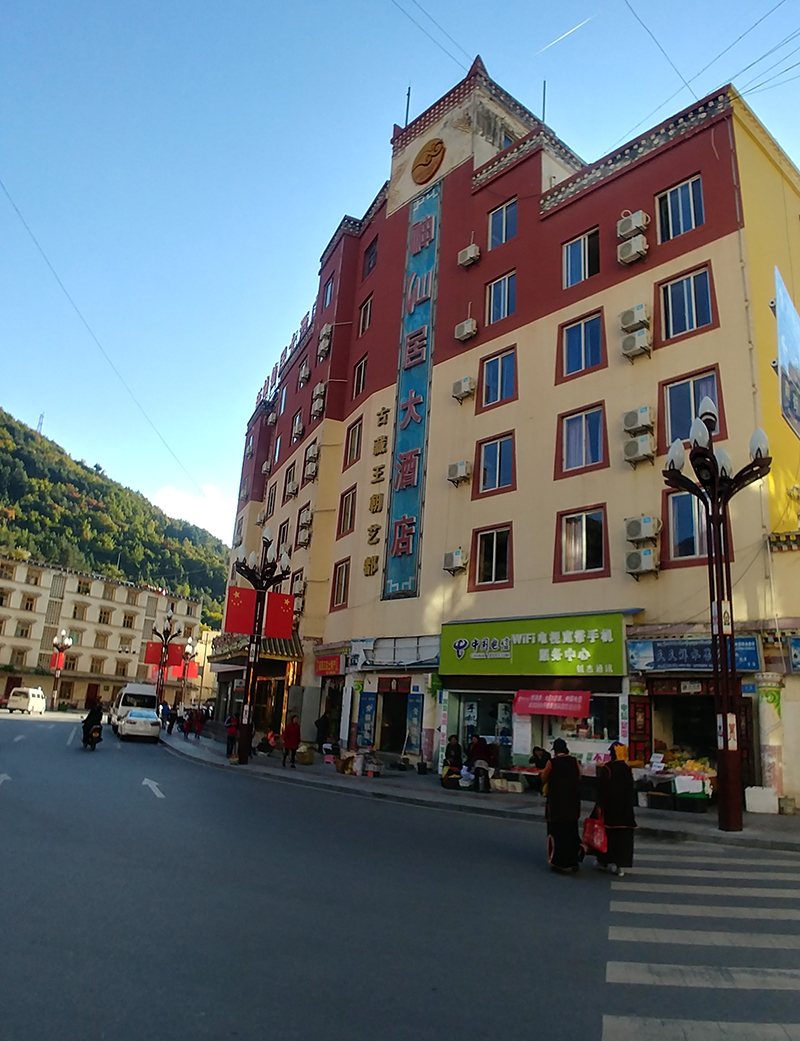 Bus stop right in front of our hotel

It was fantastic to alight just at the doorstep of our hotel. After the long tedious four hours of sitting in the bus we could not wait to get to our hotel room for a proper rest/lie down.

HeiShui was a very busy town. There were many cars, locals, tourists, shops, restaurants, roadside stalls etc etc. Right across our hotel was a taxis stand and a supermarket,  so convenient. A short distance away was a huge fast flowing river with ropes of Tibetan flags strung across it. The wind was very strong and the colourful flags flapped furiously. 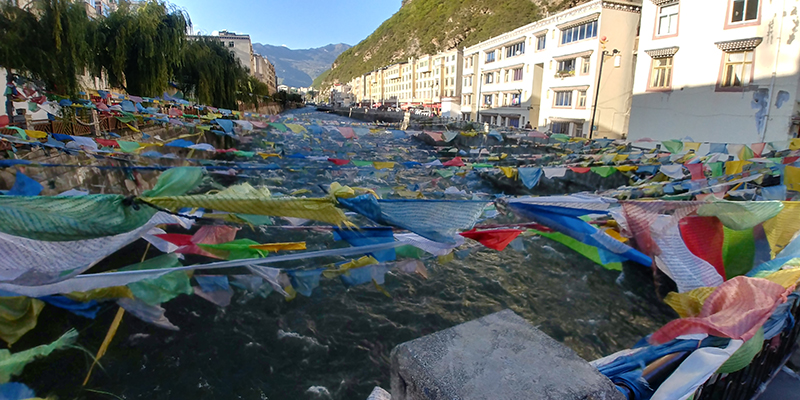 We strolled down the main street of HeiShui Town and saw banks, mobile phone shops, restaurants, shops selling local products and other selling imported goods. The weather for the day was good, no rain, clear sky and cool weather. 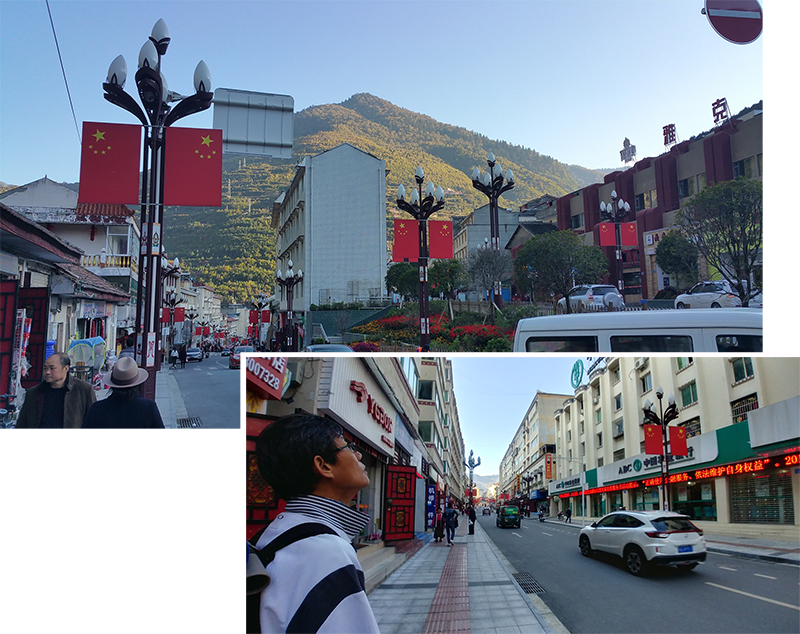 We noticed that all the main doors of the shops on the street had the same design. Red with black frames. We walked past several beef hotpot restaurants and selected one randomly and went in for dinner.  On the menu were a variety of beef, local and imported, so we picked one of each type. Each of us had a small hotpot with soup of different flavours. I picked the clear soup whereas Yat Thong had the beef flavoured soup. 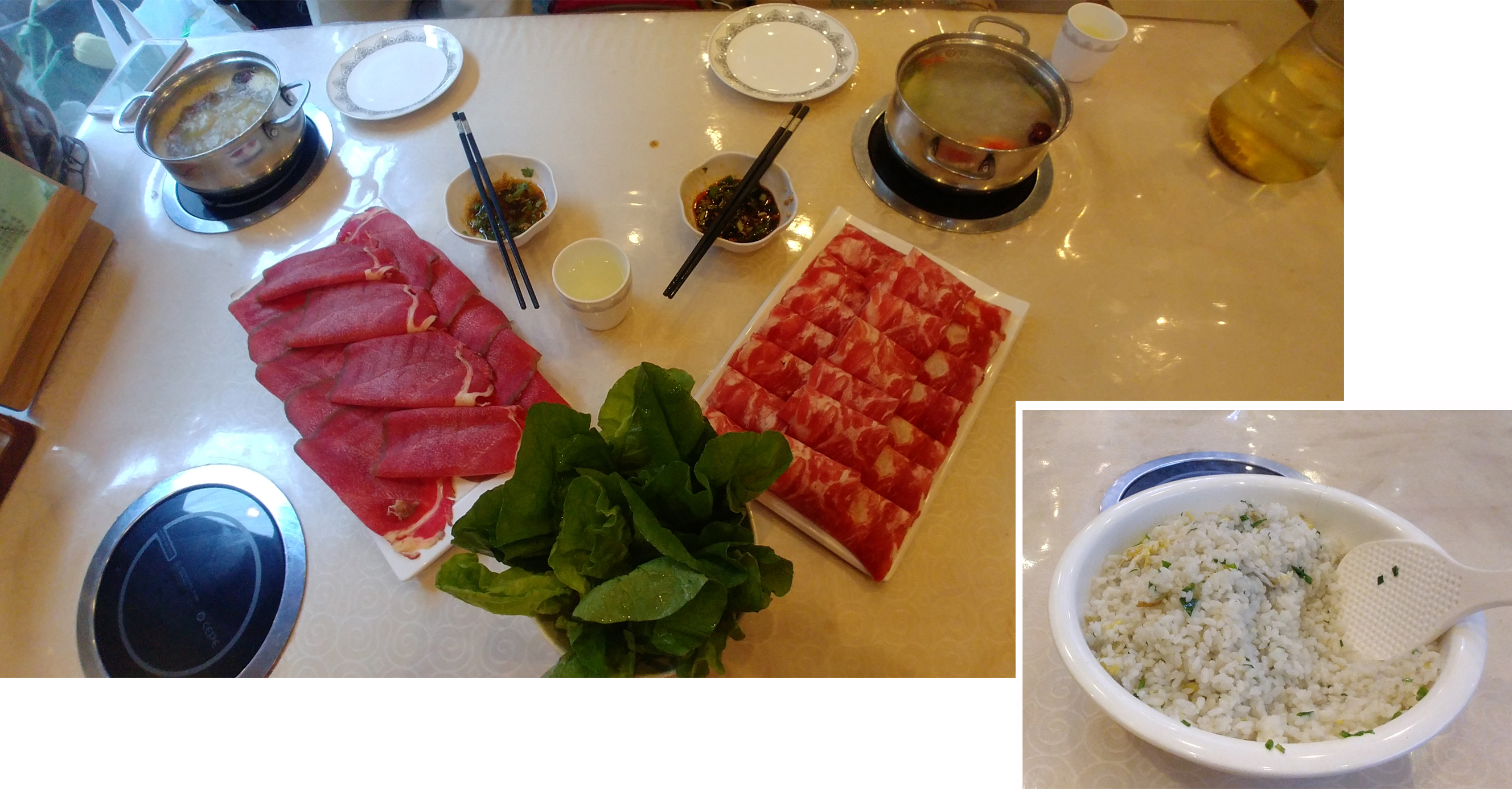 We also ordered vegetable and fried rice to go with the beef. The waitress directed me to the “sauce bar” to pick up some condiments. We only selected those that we were familiar with like, spring onion, parsley, sesame oil, black vinegar and some chilli paste. 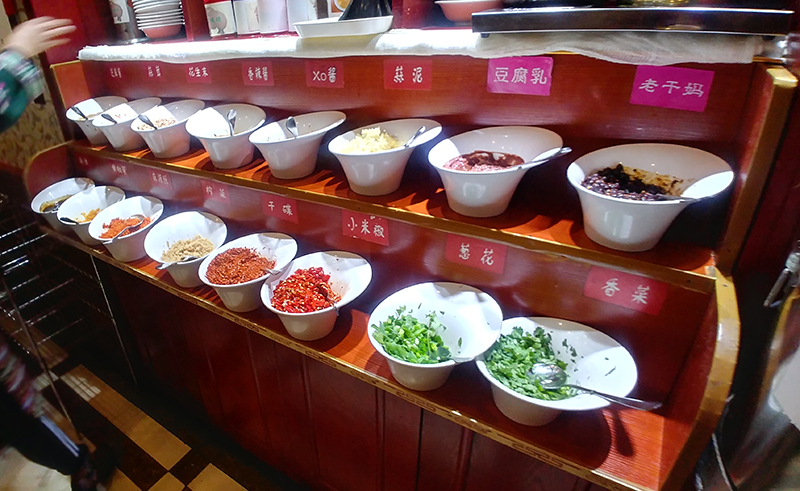 We had a fun dinner. It was different from the other dinners we had so far. It was fun dipping the thin slices of meat in and out of the hot soup till they were cooked. The “marbled” meat was okay not fantastic though. The entire meal came up to RMB¥150.

Our accommodation was ShenXianJu (新神仙居大酒店) Hotel where I had booked a room for two nights. It turned out that I had booked a standard single room that was used for two persons. So the room was actually pretty small. After the queen size bed there was not much walking space. 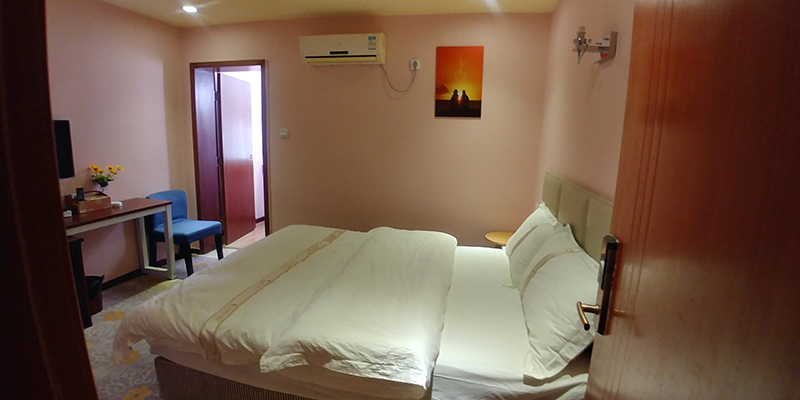 Our tiny room at ShenXianJu Hotel

The room had a door that led to a window with NO VIEW! This room came with an ensuite toilet which was pretty large unfortunately also pretty run down. 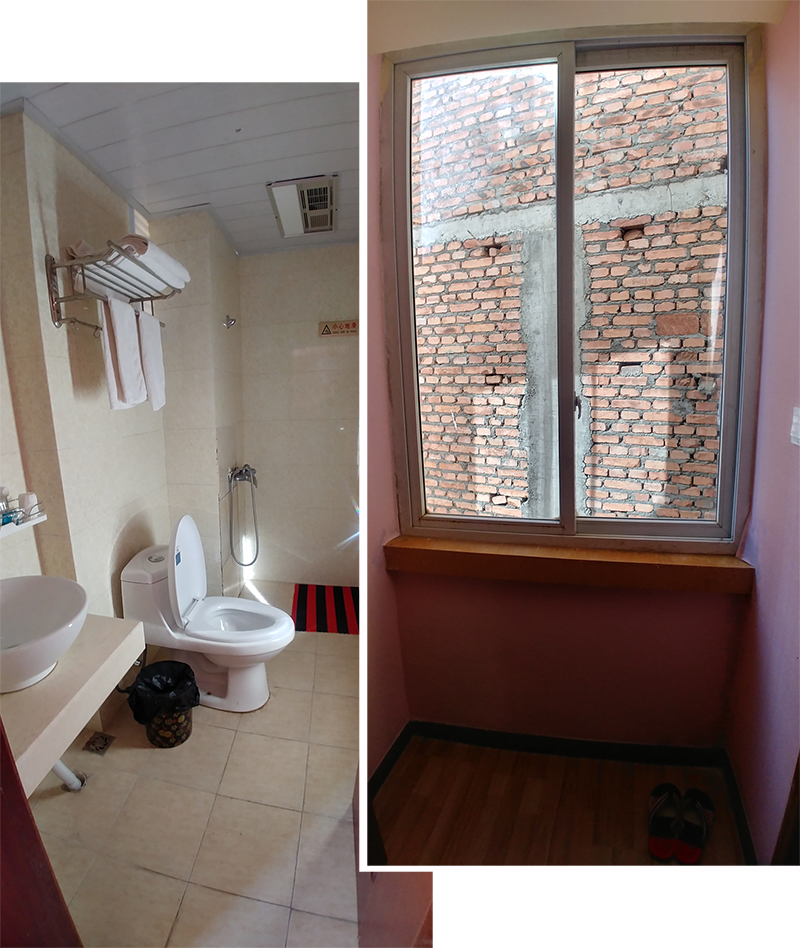 The mixer tap at the shower was held up by plastic cord. The hot water was good and there was a warmer directly above the shower so it made drying and dressing up after the shower very nice and comfortable.

On the internet there was only three hotels available for online booking at HeiShui. One was very expensive at RMB¥400 per night. ShenXianJu Hotel room rate was RMB¥240 a night and the third one was cheaper. I booked ShenXianJu Hotel because it had shops and eateries just door steps away from the hotel.