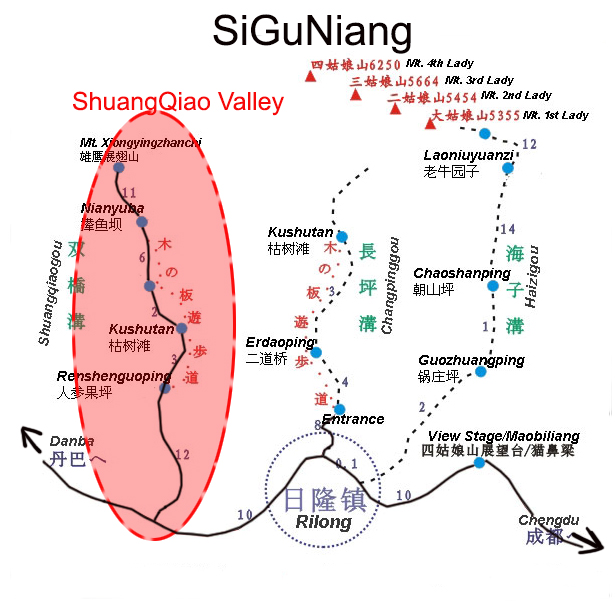 By the end of the day
We reached ShuangQiao Valley scenic reserve entrance at 9.30 am and by the time we were done with our visit and returned to the entrance it was already 5 pm. It was a seven and a half hours of exploration, ShuangQiao Valley was indeed very beautiful. Snow mountains, green valleys, autumn-yellowed trees, mirror lakes, waterfalls, wide meadows made up ShuangQiao valley, it had everything to made it a lovely paradise.

We did not take up the guesthouse breakfast as it was the same type of SiChuan breakfast that we had grown to dislike, basically watery porridge with oily side dishes. Our breakfast this morning was the beef-brewed soup that we packed back from our dinner last evening. XiaoMei warmed up the soup and we added two packs of instant noodle and had the best breakfast we had since beginning of this trip.

Mr. Lim, the hotel owner, drove us right up to the entrance of ShuangQiao valley scenic reserve. We bought our tickets at RMB¥150 per person, it included entrance ticket and tourist bus fare. 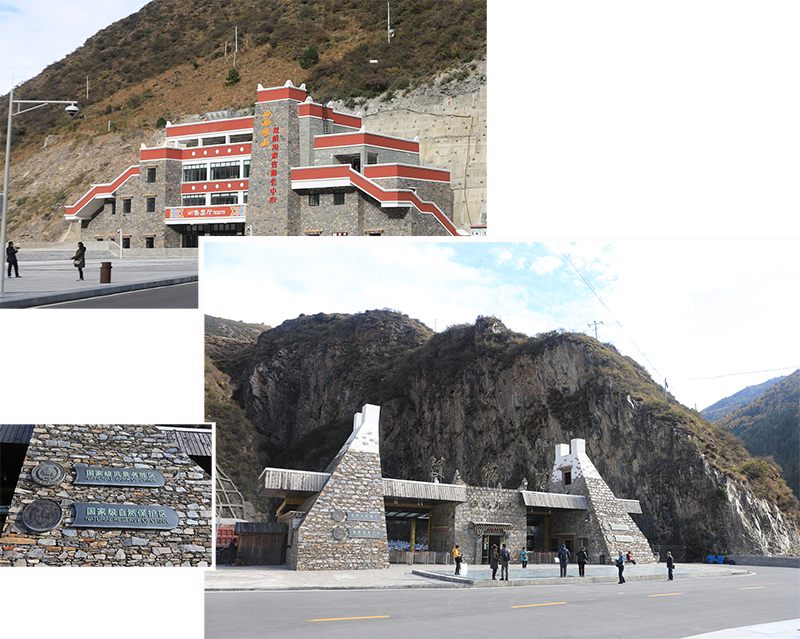 Our first sightseeing stop was at a huge dead-end parking lot (四姑娘山双桥沟-停车场). On one side parked many tourist buses on the other side was make-shift stores selling all kinds of local products. 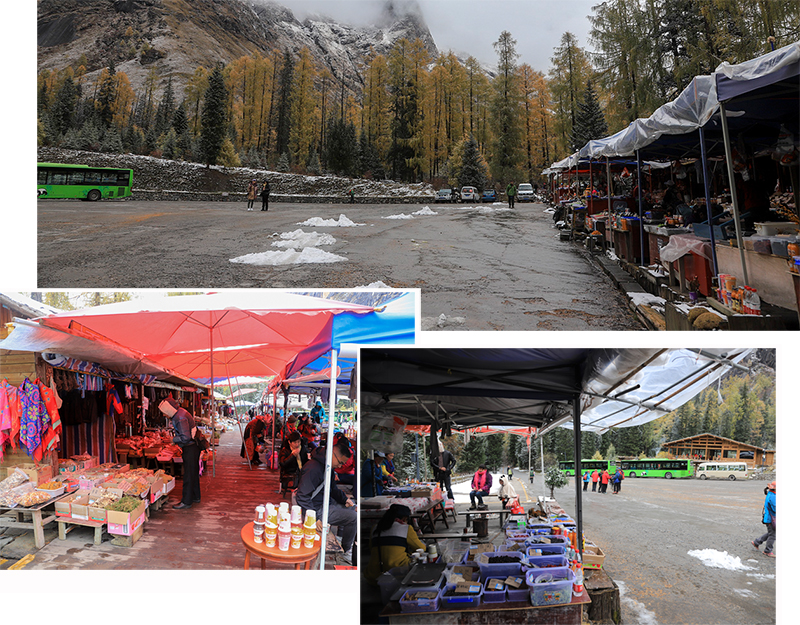 The weather was chilly and there were snow on the ground. The mist was low covering the mountain tops and no blue sky was in sight. But the scenery was still stunning. This valley was into its “autumn” phase and yellow trees were seen everywhere. 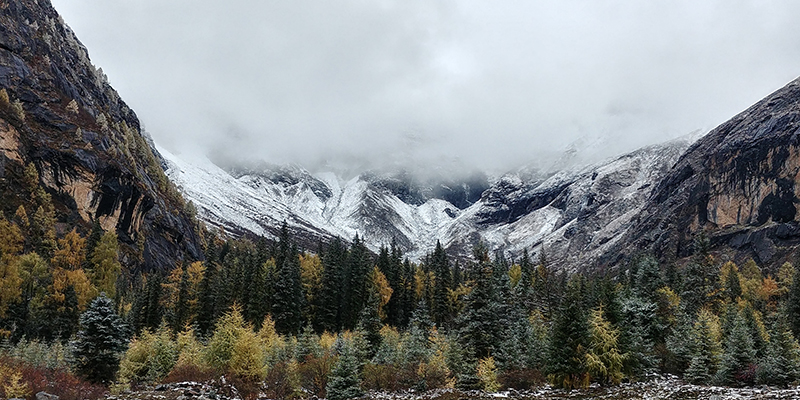 At the end of the car park was a boardwalk that went into the forested area. It was a magical land, the yellow pine leaves hanging low from the droppy branches over our heads created a mysterious mood in the air. It was as if that there were layers of fine curtains in the air. 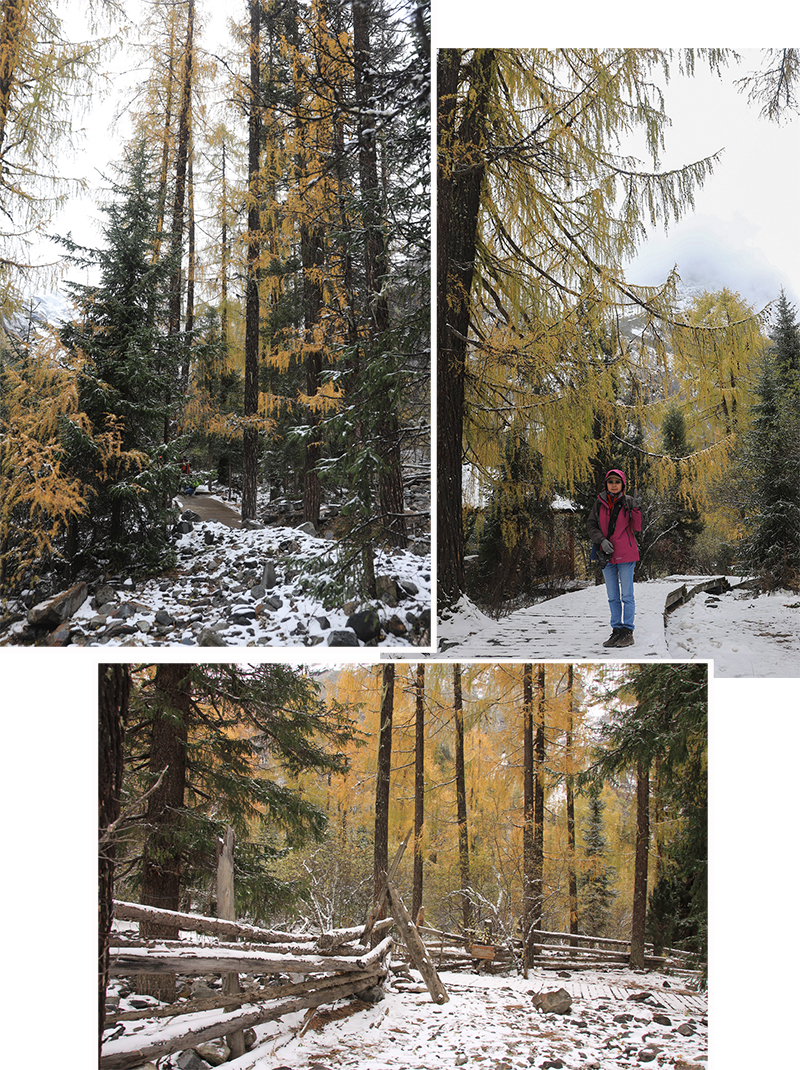 The boardwalk branched into several paths some of which were “barricaded” due to slippery snow, we took those that were opened. Not many people were keen to explore the forested areas so the place was very serene and quiet with lots of fresh untrodden snow on the paths. 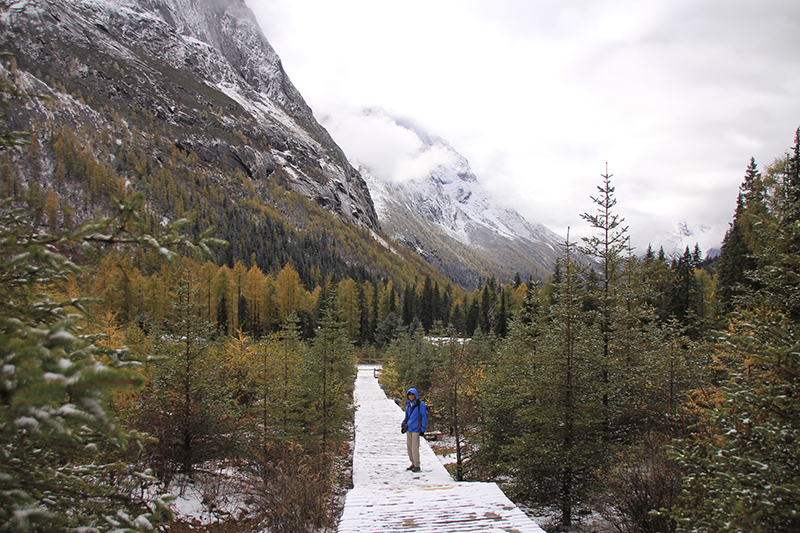 Boardwalk at the sightseeing point of ShuangQiao Valley 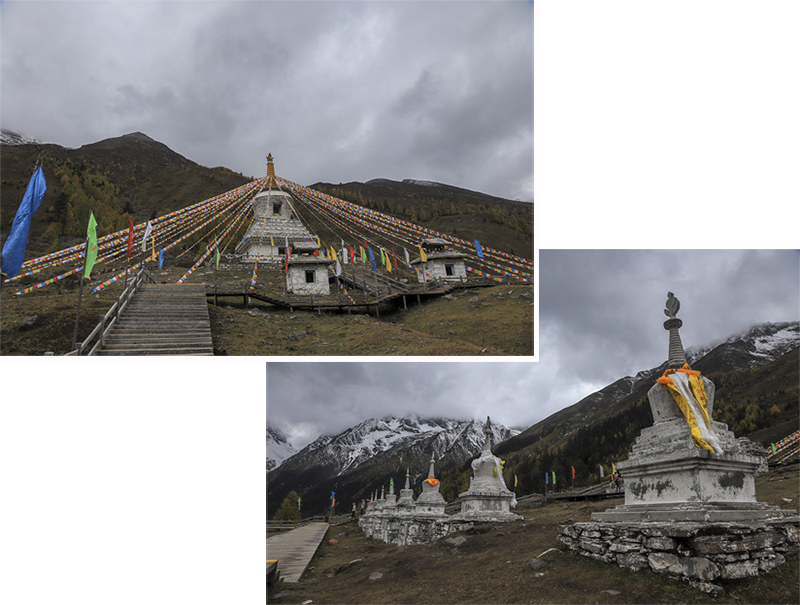 There was also a row of make-shift stalls selling food. The stall holders told us that this would be the last place we could get our lunch as there would be no food stalls in the stops ahead. We sat down and ordered some food. Two sticks (skewers) with small pieces of meat and two sticks of potatoes costed RMB¥20. 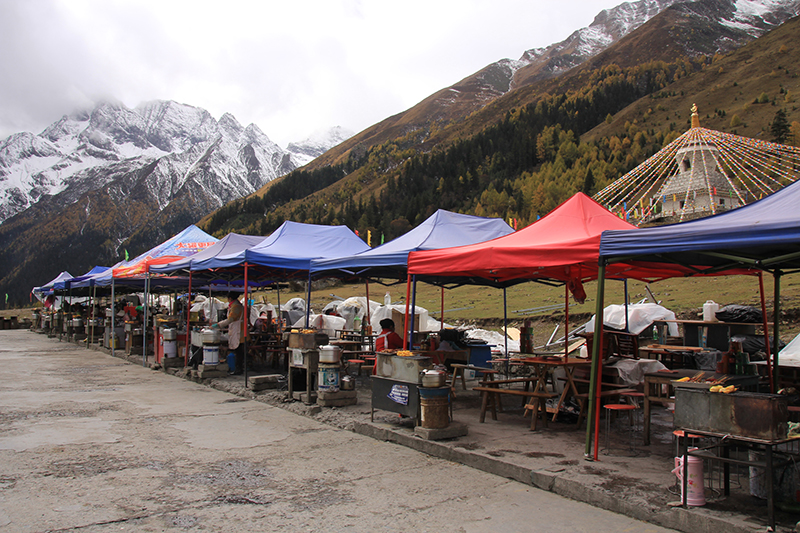 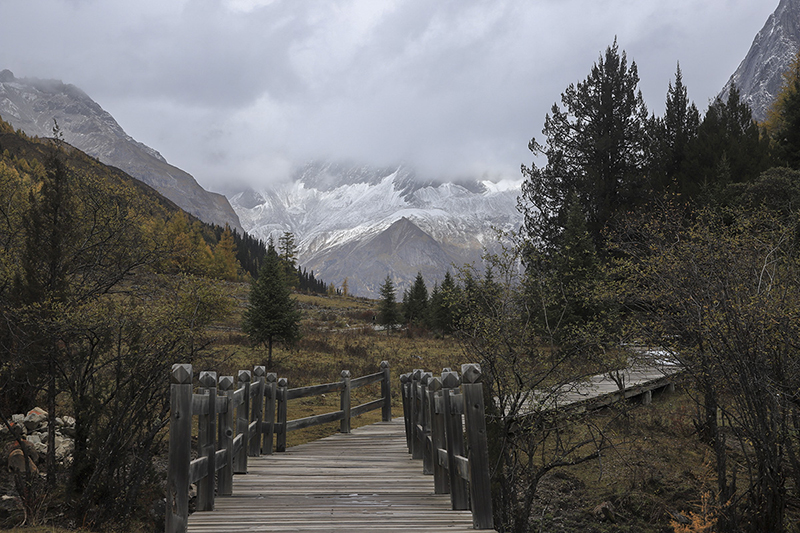 The third stop was at SiGuNoCuo (四姑娜措), there was a boardwalk beside a lake and it crossed the lake further downstream and continued on the other side of the lake. Up on the hill we could also see a waterfall. 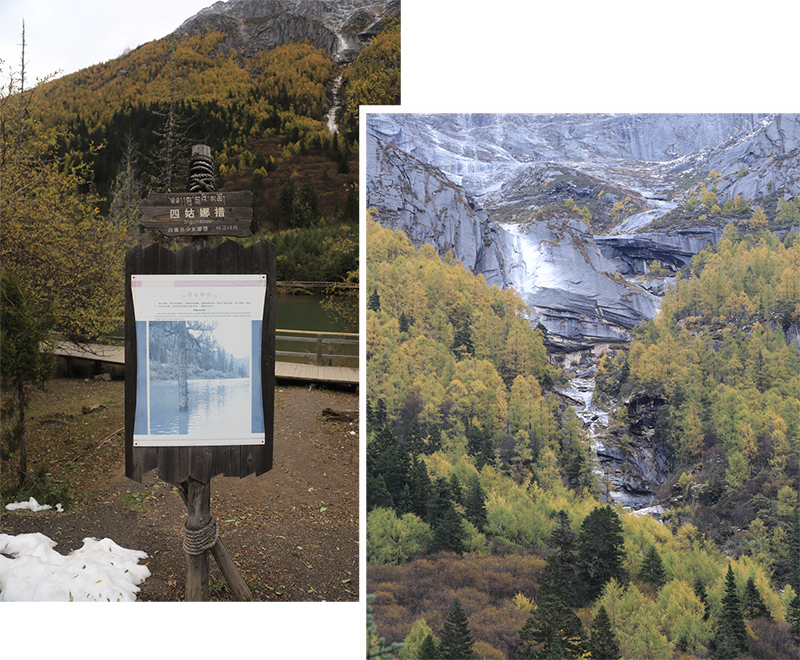 Walking around the lake was quite an beautiful experience. There were sections when the water was so still that we could see the mountains and landscape beautifully reflected in the mirror liked surface of the lake. It was so amazing to see such clear reflection on this side of the lake and none on the other side. 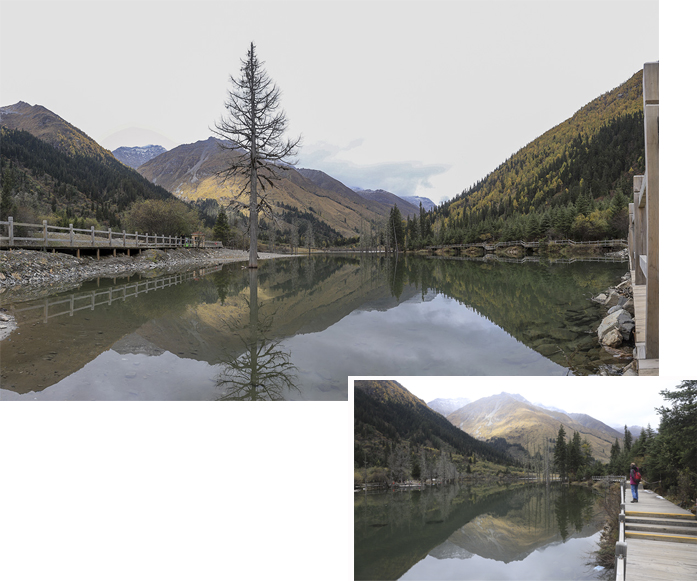 The reflection in mountain in the lake was so beautiful

On another section of the lake we came across a group of silvery white color trees across the other side of the lake, it was a lovely “icy” sight. 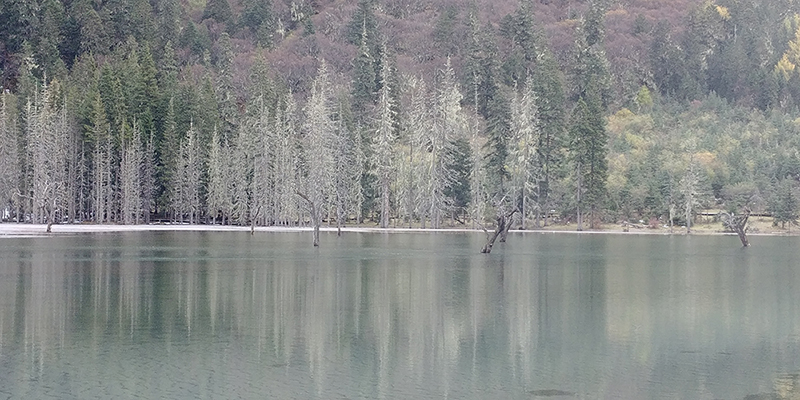 It was already near to 3 pm and we had to move on. We got back on to one of the waiting tourist buses and set off to the next stop. The next stop was a “water rafting” start stop but since nobody on the bus was interested in water rafting the bus moved on to the “water rafting” end stop.

At the “water rafting” end stop we did not see any obvious nice sight so most of us stayed on the bus. But our driver advised us to take the boardwalk that was located behind the “rafting house”. This boardwalk stretched about 2 km to the last scenic stop of this journey. From there we could board a tourist bus that would take us to the main entrance of this reserve. After hearing that half the tourists in the bus alighted. 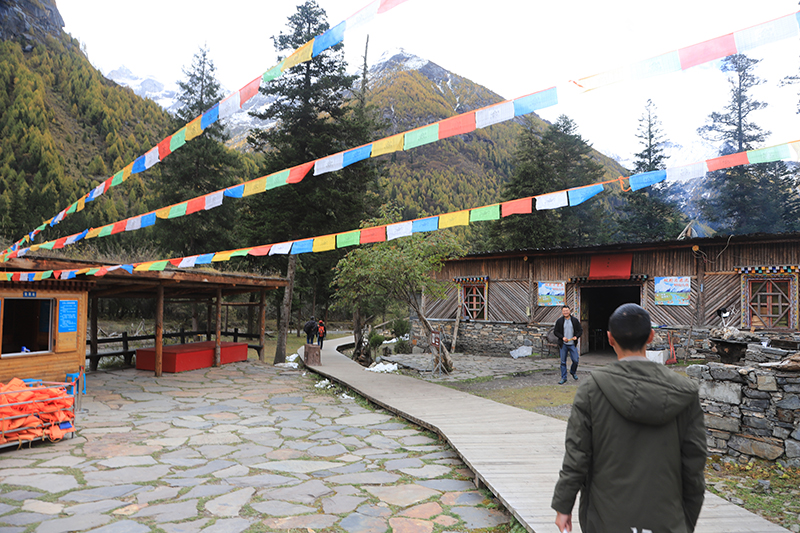 The boardwalk ran by the side of a river, but soon it went inland and the river was out of sight. Soon we reached a huge golden grassland with a few cows grazing in the meadow. 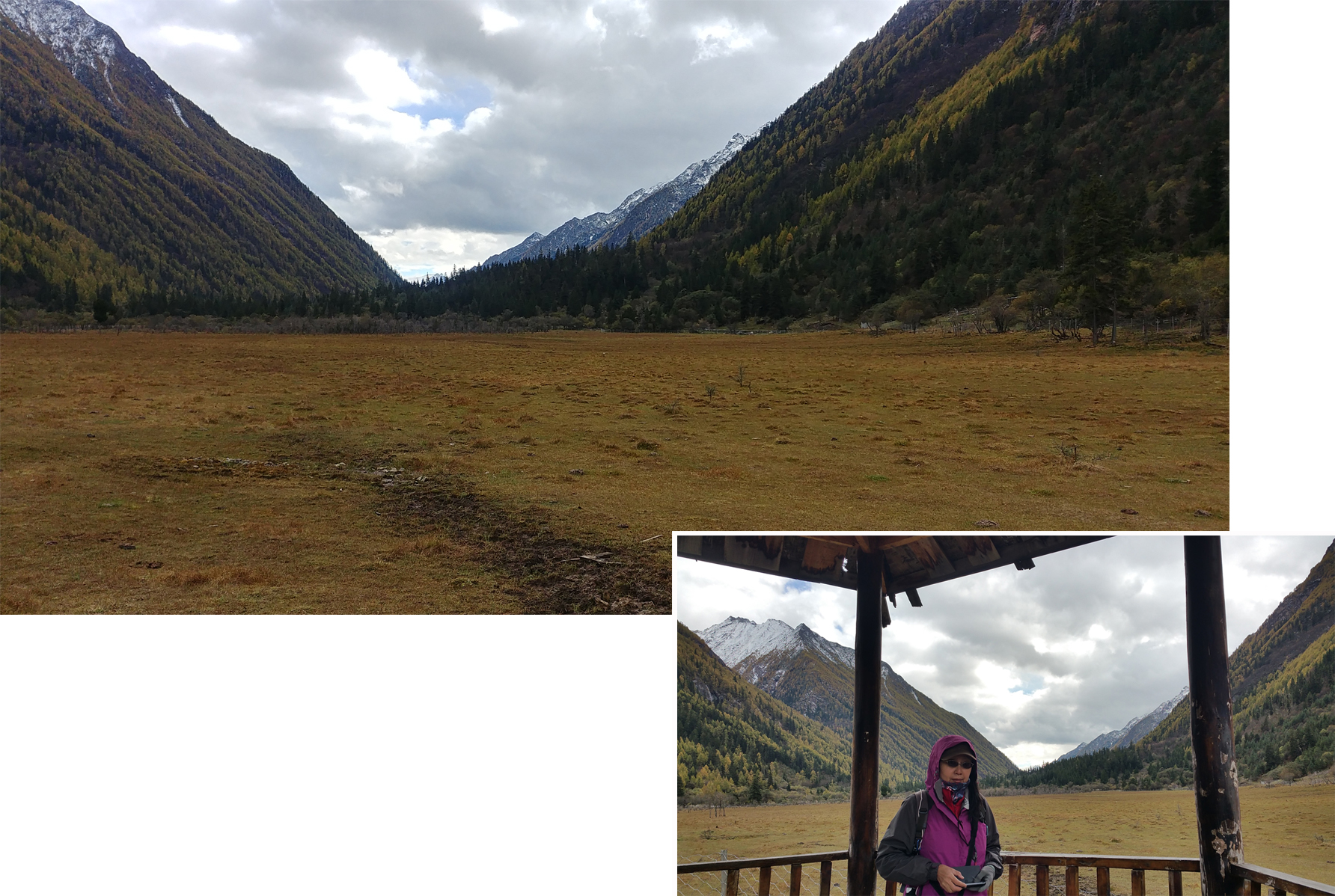 Close to 4 pm the sky started to clear up and finally at our last hour in this valley we got to see blue sky! We supposed the scenery we had seen for the last six and a half hours would look different with a blue bright sky. 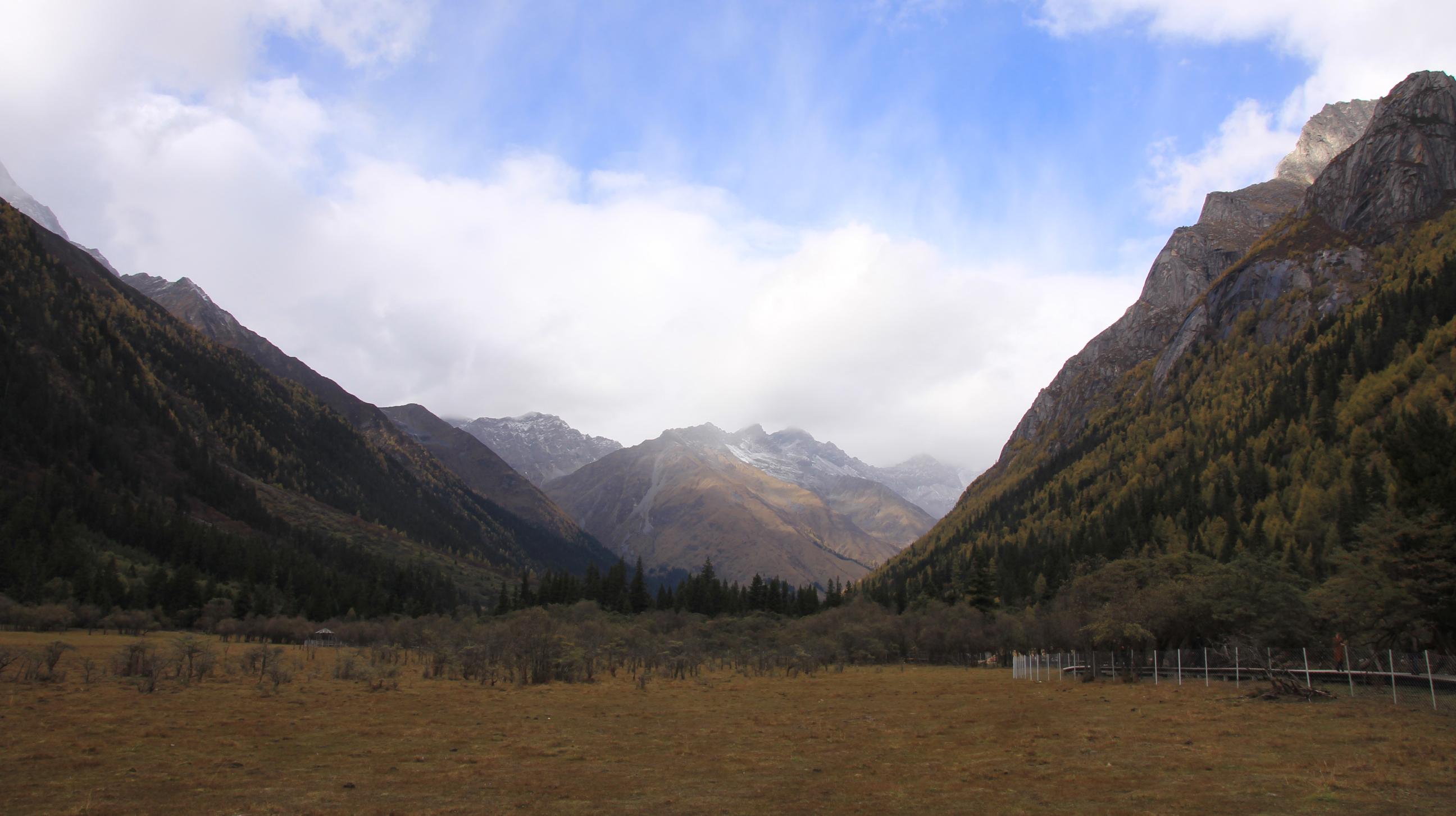 Finally we had blue sky!

We toyed with the idea of revisiting ShuangQiao Valley again if the weather tomorrow would be brighter and shiner than today. But gave up the idea soon. The scenery with a misty sky backdrop though was different from that of a bright blue sky it was not lesser in term of beauty, it had its own uniqueness. Usually on a misty day, the scenery might look dull but on careful observation we could see more shades of the same colors all round.

Near the end of our 2 km walk was another beautiful lake. It was the LongZhuCuo (隆珠措) lake. 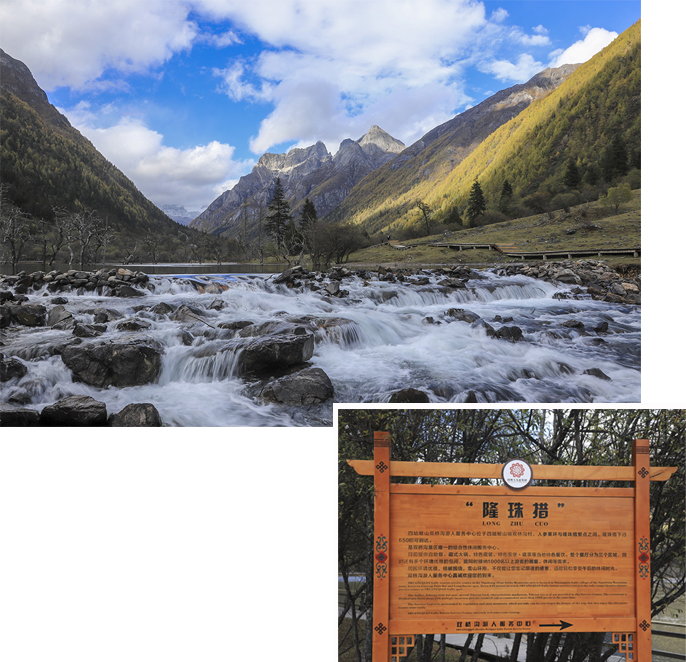 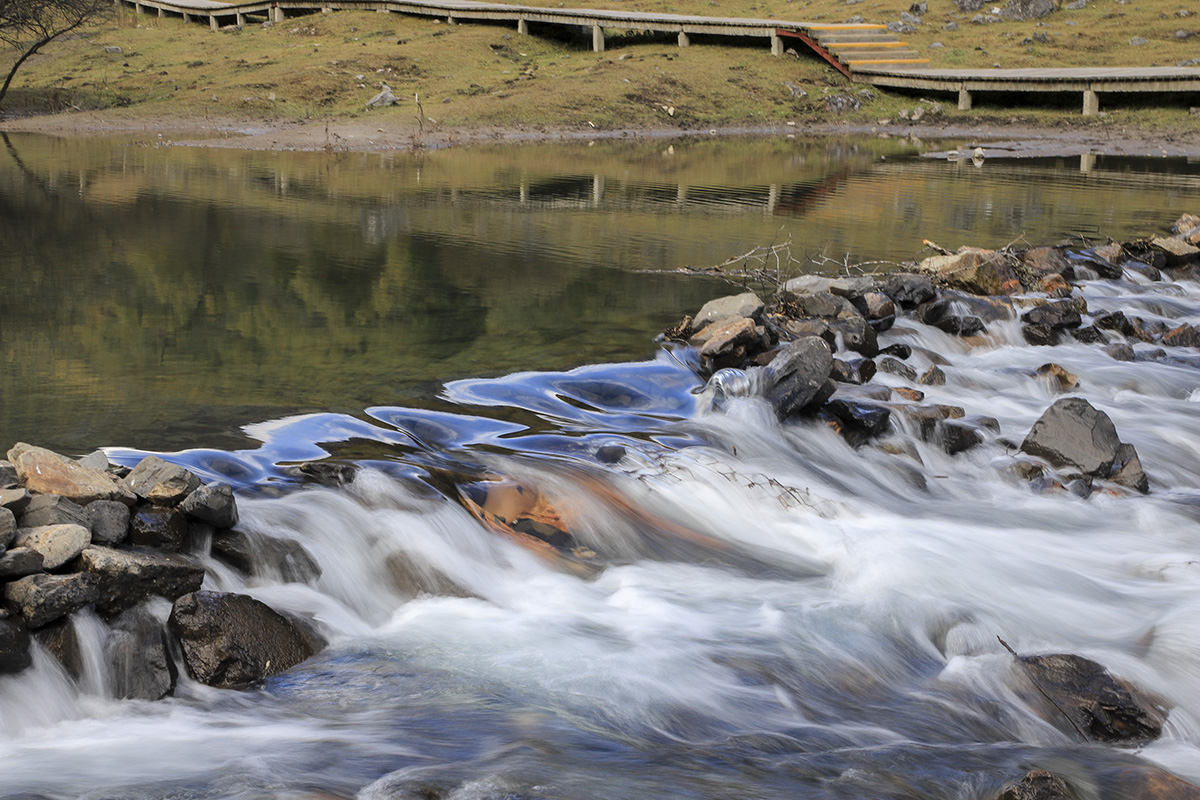 It was close to 5 pm when we left the lake and walked towards the carpark. We had been told that the last bus out of the park would be at 5 pm so we boarded one of the tourist buses that was waiting at the bus bay and headed towards the main entrance.

Once we exited the main entrance of the reserve we walked down the main road to look for a suitable place for a meal unfortunately we did not find any nice restaurant so we called up Mr. Lim our hotel owner to pick us up. He arrived in 20 minutes and we were back to our hotel by 6 pm.

YunXiGu guesthouse was run by XiaoMei and her husband (Mr. Li) with the helps of his old parents. All four of them would chip in to maintain the guesthouse and handle the customers’ requests. For dinner requests like fried dishes it would be based on the available ingredients in the kitchen and whatever XiaoMei knew how to prepare.

We order three dishes to go with rice and they turned out quite nice. We enjoyed the food very much eating up everything. The meal costed RMB¥ 59