The plan for the day was to “transfer” from SiGuNiang Village (RiLong Town) to ChengDu (成都). The distance was about 194 and the journey would take about 3.75 hours. Upon reaching ChengDu the first task would be to leave our luggage at our hotel and do some city sightseeing. 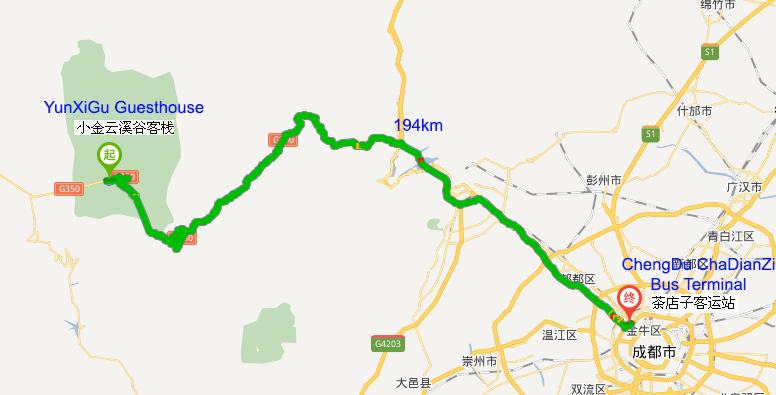 By End of the Day
We started our journey at about 10.20 am and reached ChengDu at about 3.00 pm. The journey took about 4 hours 40 minutes, it took longer than expected due to some unexpected stops and detours. Our driver did not drive us all the way to ChengDu (成都) ChaDianZi (茶店子客运站)Bus Terminal as we expected, instead he let us down at a subway station. He said something about out-of-town car not being allowed into the city.

After resting for an hour in our hotel, we visited KuanZhai Alley (宽窄巷) which was much more beautiful than our expectations.

Mr. Li had helped us reserved two seats on a shared-hired car to get us to ChengDu. The fare was RMB¥120 per person. The shared-hired SUV came all the way to our guesthouse to pick us up. In the car were already three other passengers. Yat Thong was hoping to get the passenger seat beside the driver unfortunately it was already taken.

Another method of getting to ChengDu was by public bus. The bus service started from XiaoJin (小金) and would pass through RiLong before heading to ChengDu ChaDianZi bus terminal. For the public bus we would have to wait at a bridge in RiLong Town at 8.30 am for the first bus or 12 noon for the 2nd bus. The bus fare per person was about RMB¥100. We opted for the shared-hired car because we could choose the departure timing and the convenient of being picked up at the doorstep the guesthouse. 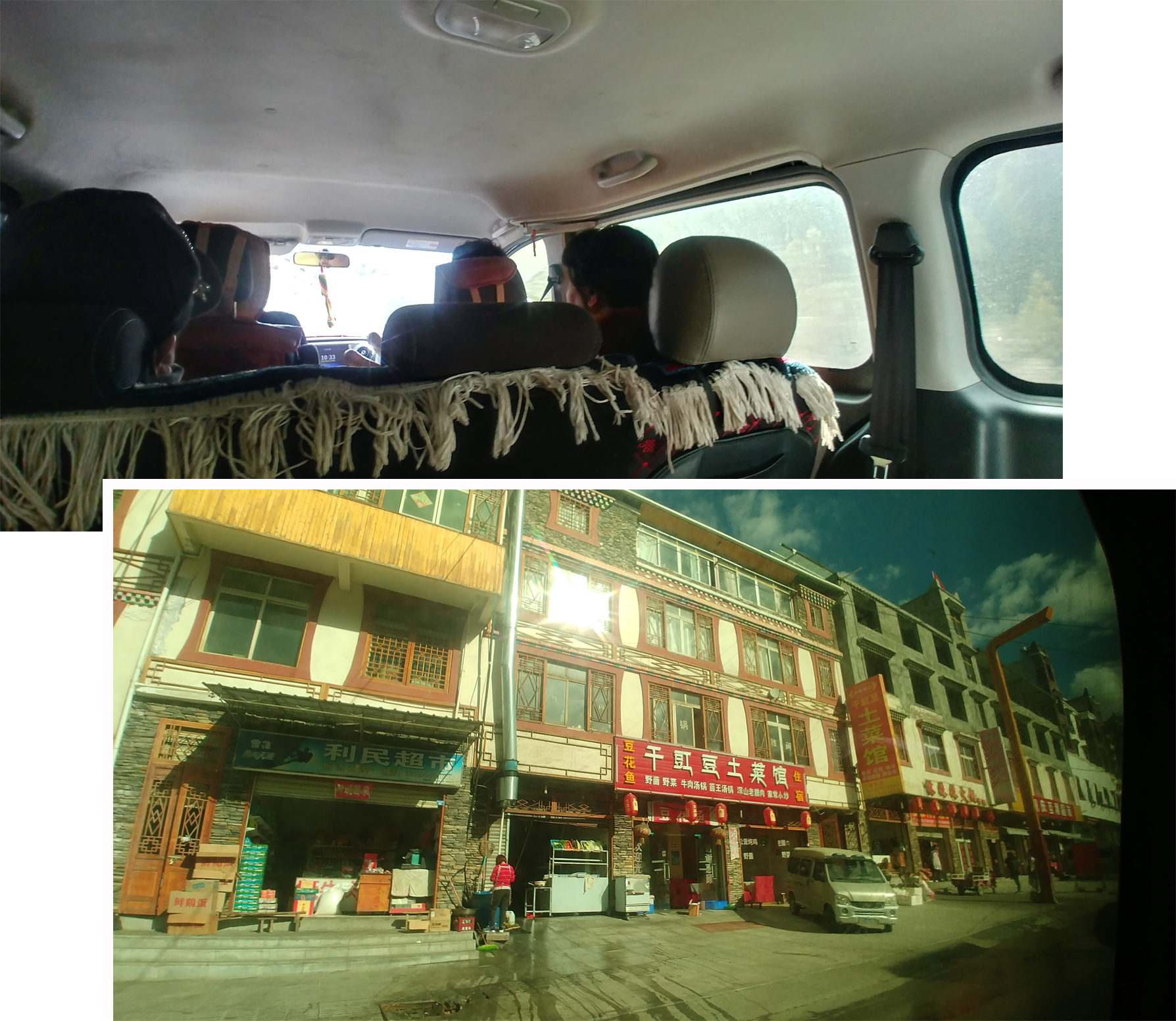 On our way out of RiLong town

The road was pretty windy and the air was very misty. One of the passengers, a local was getting sea sick so the driver had to pull off the road for a short break. 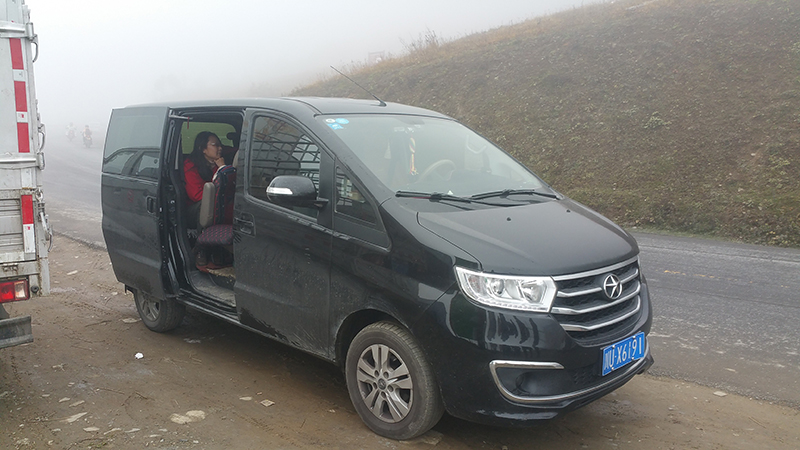 Stopping for a break on the mountain road

Coincidentally our shared-hired car stopped near a group of locals slaughtering a black hairy cow. They were cutting it up and selling the meat to the others that gathered around them. 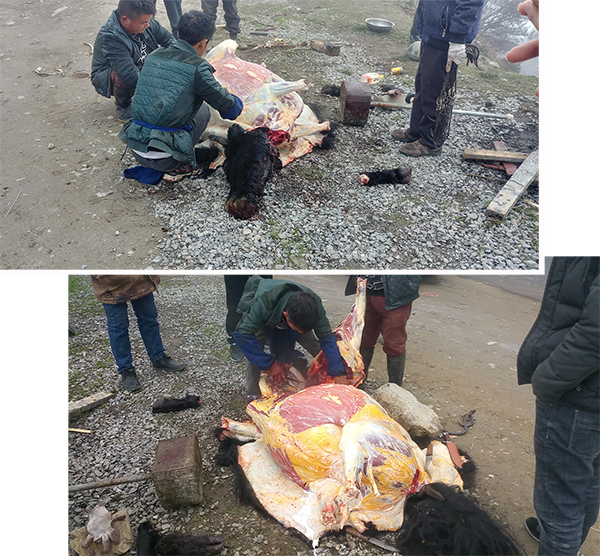 Our journey continued down the mountain and we came to a valley where the foliage were turning yellow and red. Very nice! We figured this place would be even more stunning in two weeks’ times when more autumn colors could be seen. 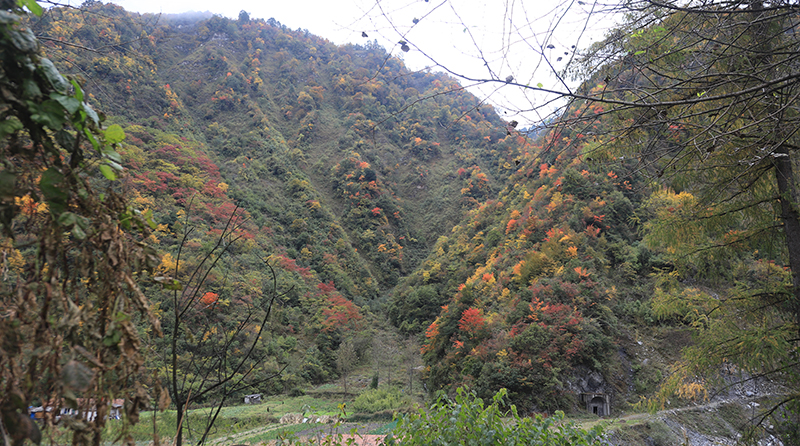 About 80 km from ChengDu our driver turned out to drop one of the passengers at DuJiangYan (都江堰). Unfortunately the passenger was not too sure of the exact location she needed to get off to meet a relative, so our driver spent about 20 minutes driving around searching for the place. So far the people that we had met in SiChuan were very nice, like this driver who did not lose his patience even when his passenger was at fault.

As for us after we understood that our driver could not drive his car to ChaDianZi Bus Terminal we told him to let us off at any subway station that was along Train Line 2. Our driver brought us to TianHe Road Station (天河路站) where we took Train Line 2 for 11 stops to TongHuiMen (通惠门站). The mass rapid transit fare was RMB¥ 5 per person. 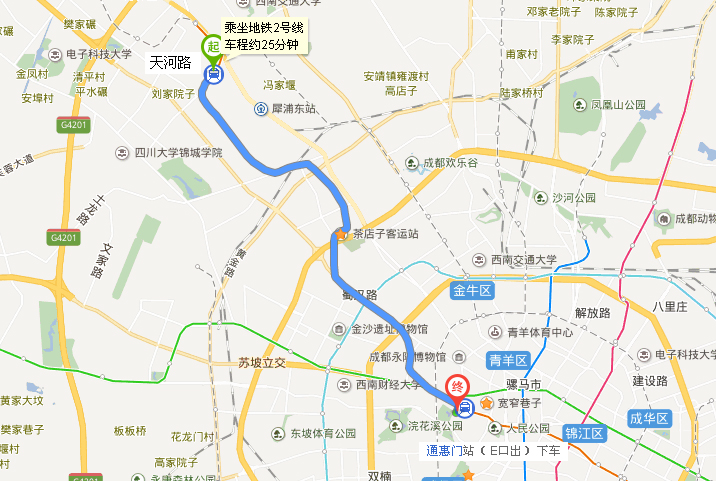 From TianHe Station and TongHuiMen Station

It was just a 300 m walk to our hotel from the station. Our hotel had a long name it was called the “ChengDu Dreams Travel WenJun Courtyard Hotel KuanZhai Alley Branch”, fortunately its Chinese name was slightly shorter, 成都梦之旅文君楼庭院酒店. We had selected it as our stay in ChengDu because we were very impressed by its architecture. 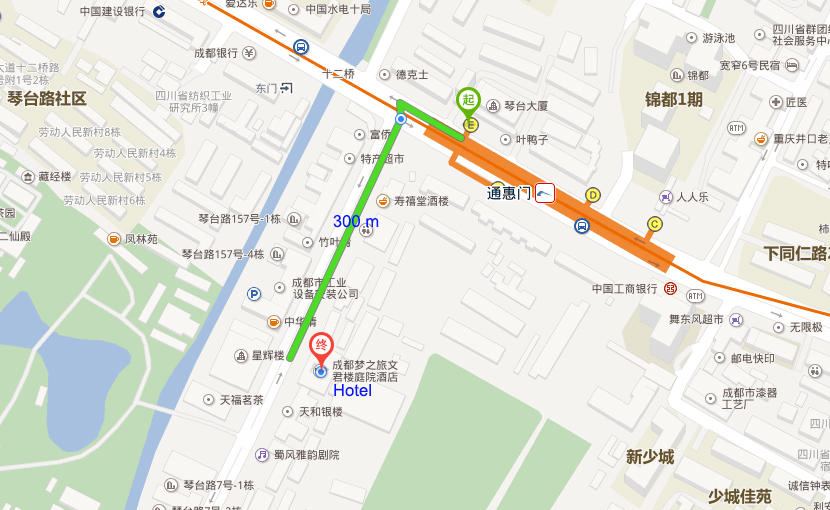 We had done our research using BaiDu Map so we knew that TongHuiMen (通惠门站) station was the nearest station to our hotel and we should  take Exit E of the station. As we came up of the station onto the the road level we could see an huge impressive traditional building immediately across the street. This building was the north arch entrance of QinTai Street (琴台路仿古街). Looking at the map on my phone, it drawn to me that our hotel was actually on QinTai Street. 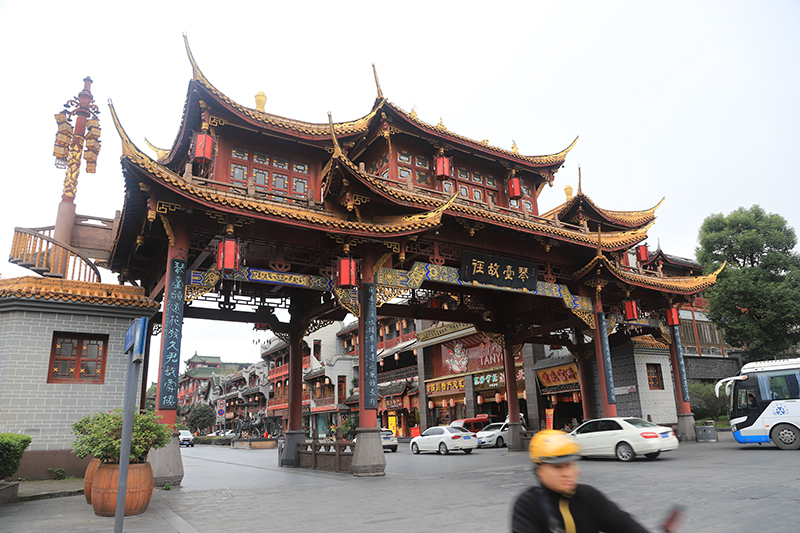 We  knew that our hotel was lovely but we did not realise until now that it was also sitting in one of the most beautiful and famous streets in ChengDu. We dragged our luggage across the road and walked into the street passing under the beautiful elaborated arch of the North Entrance. The buildings on both sides of the street were lovely. 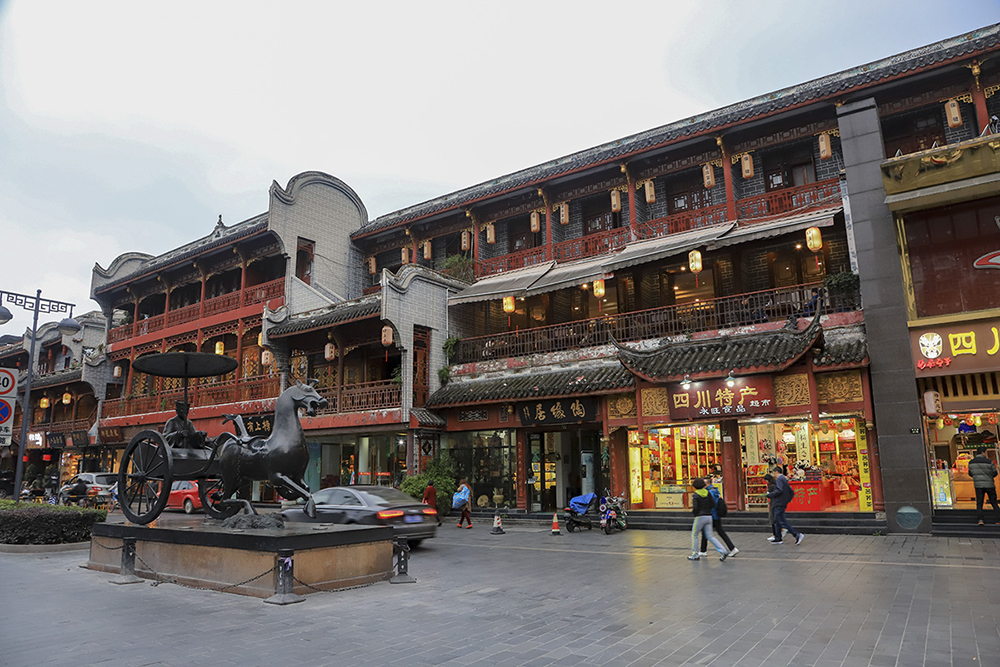 QinTai Street was 900 m long. It was a street lined with restaurants, opera houses, jewellery shops, guesthouses and etc. The street floor was tiled making it appeared clean and free of dust. It was a pity the QinTai Street was not closed to vehicles, it was a two ways road for cars. Though the street was wide we constantly had to watch out for cars and scooters zooming by us.

Our hotel “ChengDu Dreams Travel WenJun Courtyard Hotel KuanZhai Alley Branch” was  a building in the middle stretch of QinTai Street. Its frontage was very impressive with its many layer of arch-golden-tip roofs. 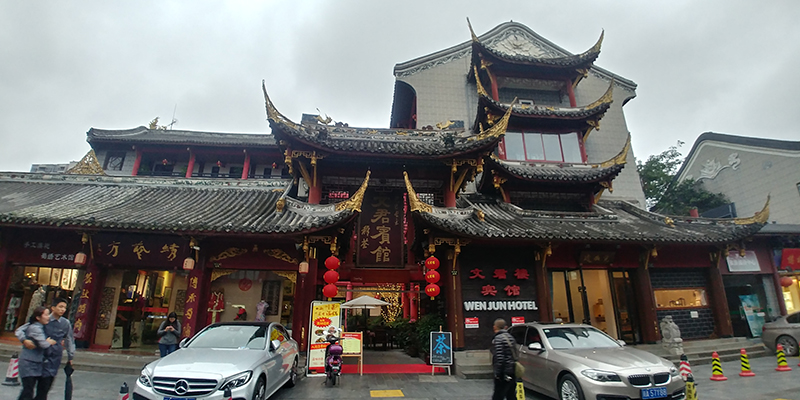 Checking in was a brisk, we were assigned to a room on the highest level (4th level). Our booking did not include hotel breakfast so we were pleasantly surprised when the receptionist gave us vouchers for three days of breakfasts at no additional cost. Lovely! We loved our room, it was spacious and comfortable. Outside our room door was a set of  table and chairs with a lovely view of QinTai Street. 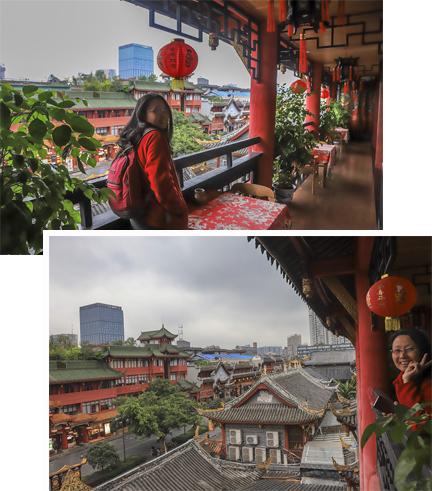 Balcony view of QinTai Street from just outside our room

KuanZhai Alley (宽窄巷子) was one of the most famous attractions in ChengDu and it was within walking distance from our hotel. That was also one of the reasons we chose to stayed for three nights at ChengDu Dreams Travel WenJun Courtyard Hotel. From our hotel to KuanZhai alley was about 900 m. 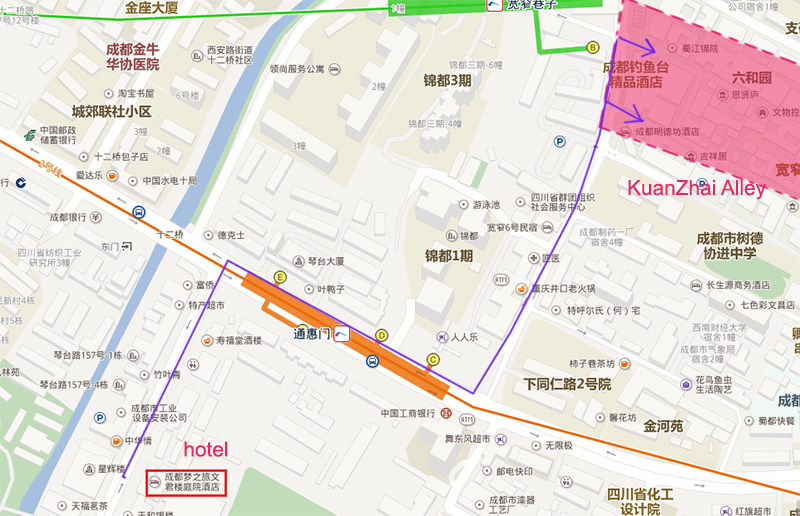 The route was pretty straight forward, one right turn and one left turn and we were at KuanZhai Alley! 900 m was a “short” walk when there were so many interesting shops, stores and sights along the way. KuanZhai alley consisted of three streets, the Kuan (宽) which meant “broad” and the Zhai (窄) which meant “narrow” and Jin (井) which meant “well” streets. 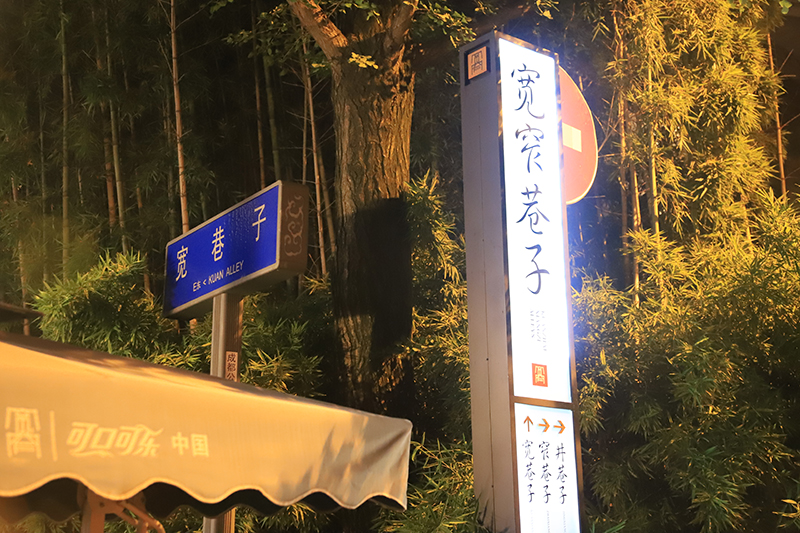 We reached the “Jin” (well) street first, but decided to skip it and move on to the “Zhai” (narrow) street which seemed lot more vibrant. The sun was already down, the sky was turning dark and the street/shop lights were coming on. The place was already packed with people but it was still a great place to stroll because KuanZhai Alley was off limit to vehicle! 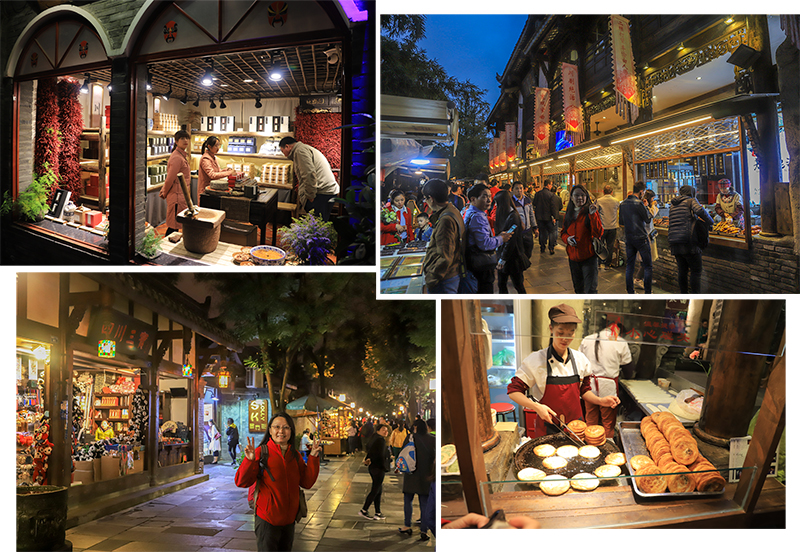 We moved from one street food stall to another. We bought various street food to try, nothing fantastic but still fun to eat. We came to the outside of a restaurant and there was a huge crowd at its doorway. We were curious so we squeezed past the crowd and saw this humongous monster! 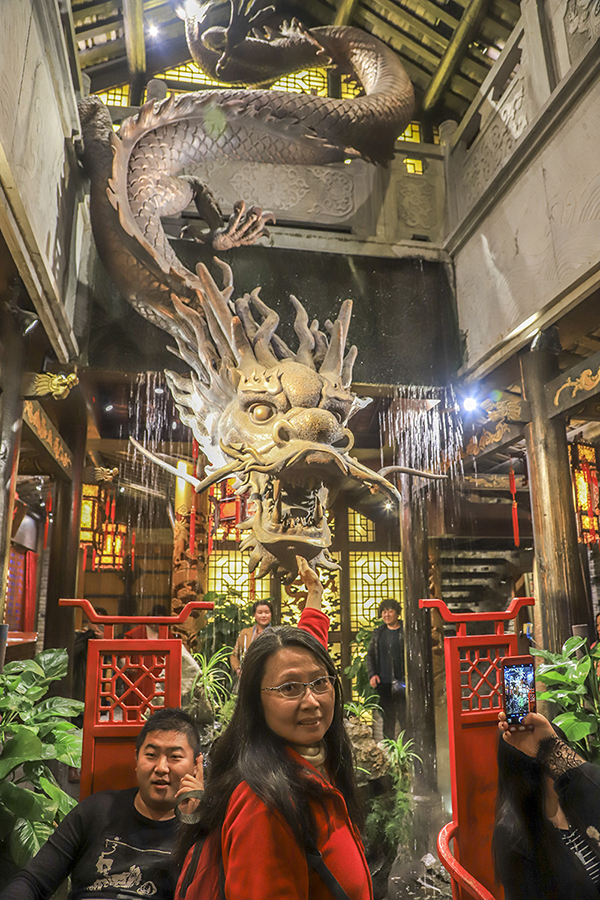 A dragon descending from the top level

A huge “Chinese Dragon” was flying down from the 2nd level of the restaurant. Everybody was squeezing in to have a photo with the “dragon”.

The street was not too long about 400 m, at the end of the “Zhai” street there was a short cross street that took us onto the “Kuan” street where there were more beautifully lighted shops. 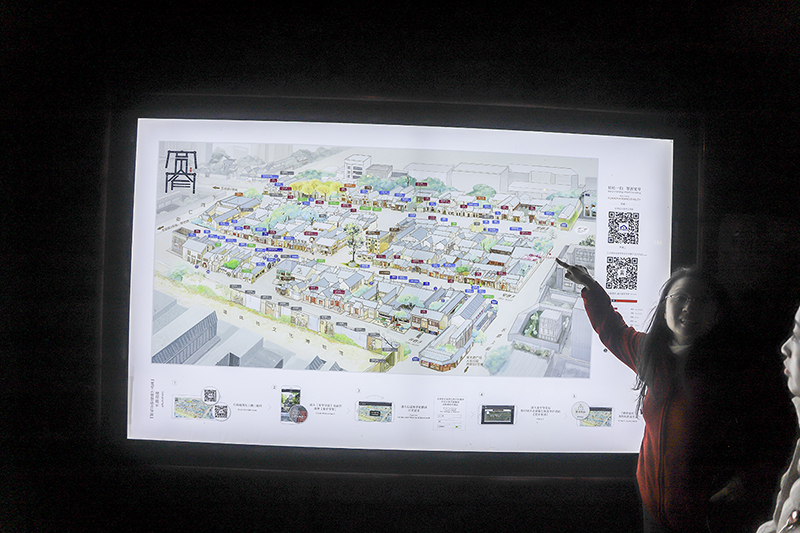 We walked from end to end both the “Kuan” street and the “Zhai” street. It was great how these buildings were beautiful restored/preserved. This alley was able to sustain in today’s world because it had adapted to the modern world, selling products that captured the hearts of locals and tourists. 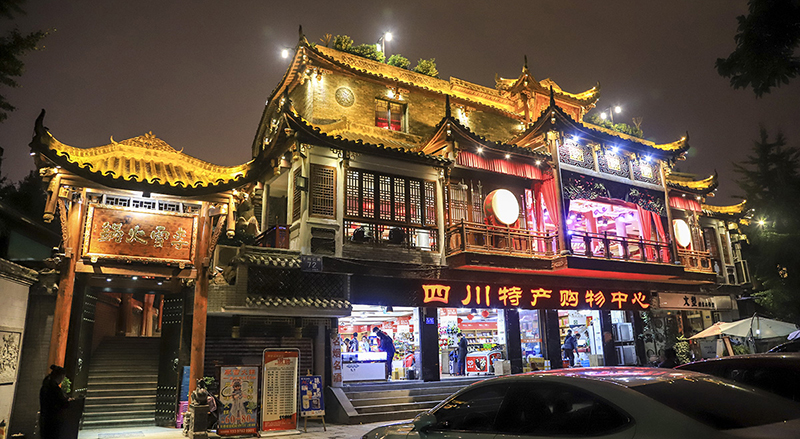 Our Accommodation of the Night

Our double room on the fourth level of “ChengDu Dreams Travel WenJun Courtyard Hotel KuanZhai Alley Branch” was lovely. It was large, clean and comfortable. Who would have thought that in this ancient building (probably built during the Tang dynasty) the room could be so modern and cosy. 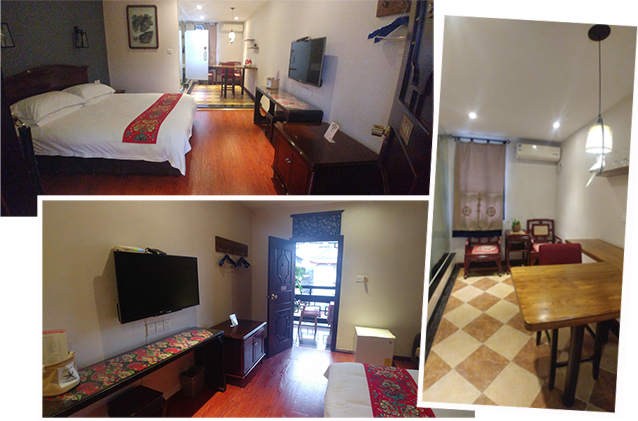 The ensuite toilet was huge, clean and modern too. Though the room price was costlier than others around ChengDu, it was a price well worth the environment. The cost of the room was RMB ¥1000 for three nights and the reservation was done on Booking.com. 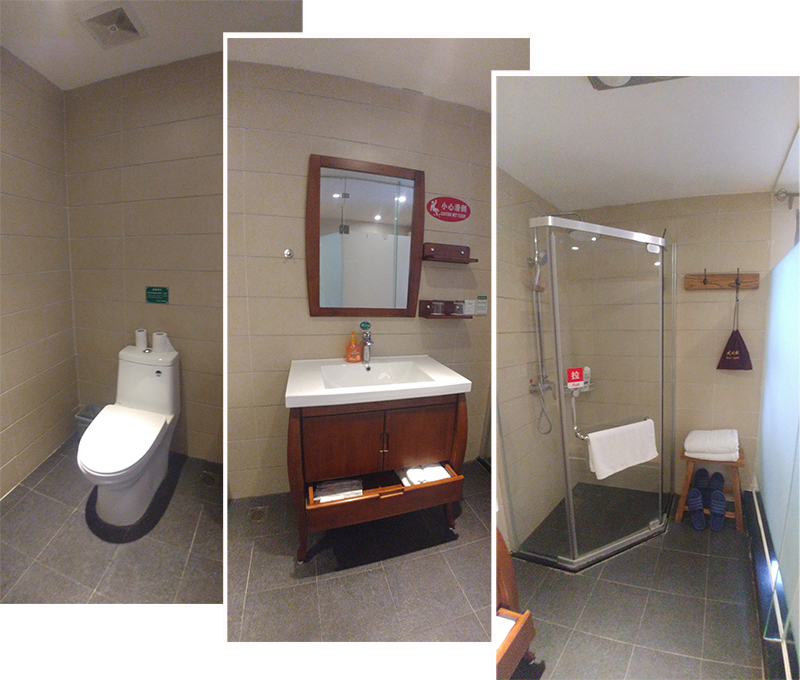