In the morning we would be at Osaka Mint for cherry blossom viewing again. In the afternoon we would travel north to visit a traditional thatched roof village, Kayabuki no Sato in Kyoto Prefecture, north west of Kyoto Central. For the night we would stay at Makino near Lake Biwa. 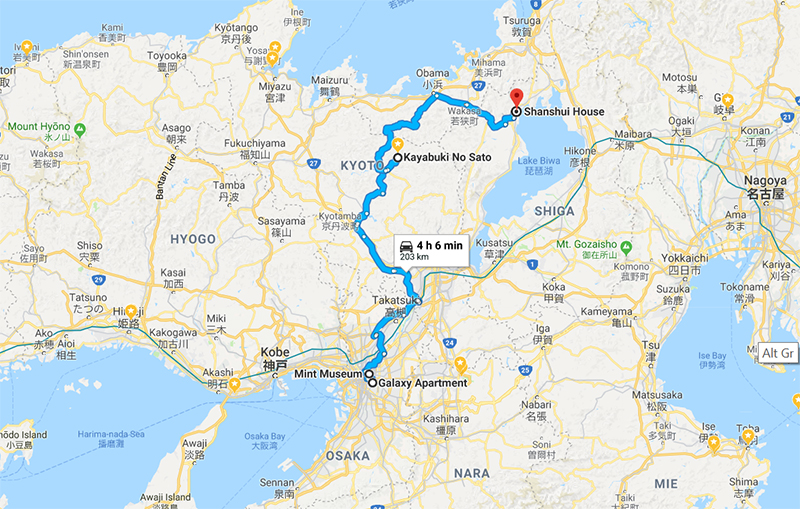 By the end of the day
Osaka Mint was nice but terribly crowded which took away some our enjoyment. Kayabuki no Sato was beautiful with  cherry trees blossoming, the village was serene and still relatively tourist-free. 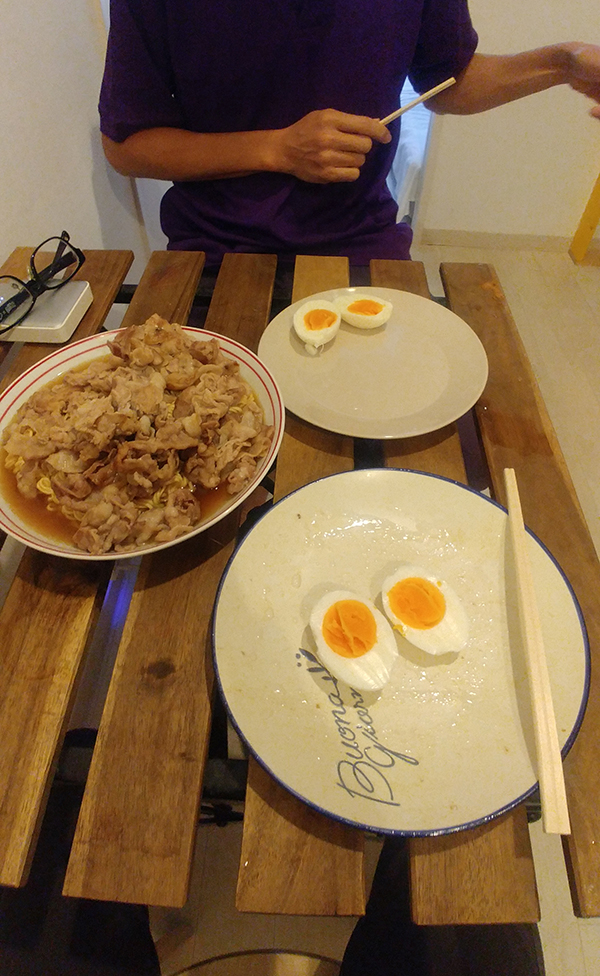 Last evening we went to a supermarket to buy some eggs and pork belly. So this morning we cooked them to go with our instant noodles. For a change it was nice eating in and cooking in the new and nice kitchen of Galaxy Apartment was a breeze. After breakfast, we tidied up then packed up and left. Check out was also a self-checkout process.

Osaka Mint Bureau was a governmental agency and head office of Japan Mint. In its compound were 300 cherry trees belonging to more than 100 varieties. Many of these trees were of the late blooming yae-zukara type.

Every April, Osaka Mint was opened to public for one week for sakura viewing and today was the first day of this opening.

We reached Osaka Mint at about 8.30 am ( 30 minutes before it was open for entry) but was not able to turn into the road that led to its front gate as it was cordoned off by security guards.

The carparks nearer to the entrance of Osaka Mint were already full so we had to move further away but still managed to park not too far from the entrance of Osaka Mint. As we walked toward the entrance we saw a long queue. Usually there would be a person carrying a sign board that said “End of Queue” so we went to that person. He told us that this queue was for people who wanted to buy coins at the mint. We should go forward and join another queue. 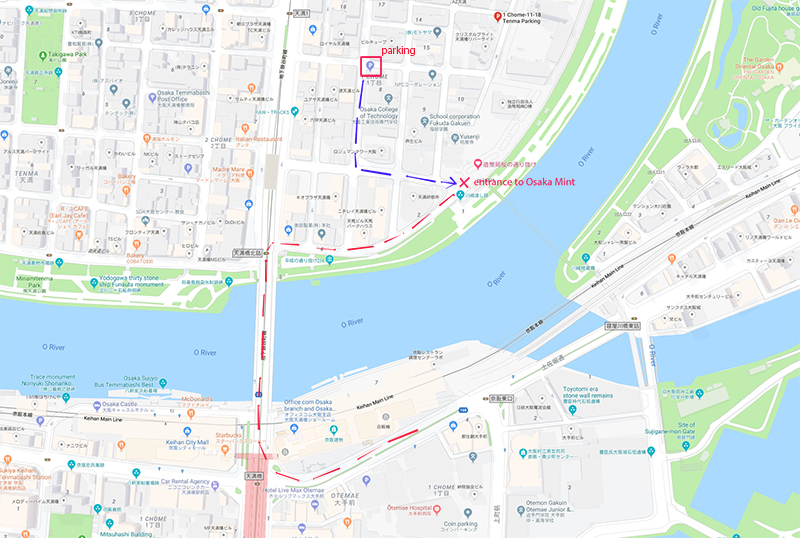 Parked and walked to Entrance of Osaka Mint 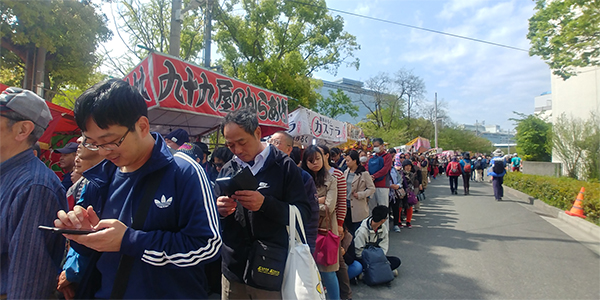 The crowd was crazily massive. We had to held on to each other tightly to prevent being swept off from away for each other. It was not easy to truly enjoyed the flowers as we were constantly pushed by the people around us.  Luckily as we proceeded inner the crowd became more disperse and we finally were able to relax  and let go of our grips on each others’ sleeves. 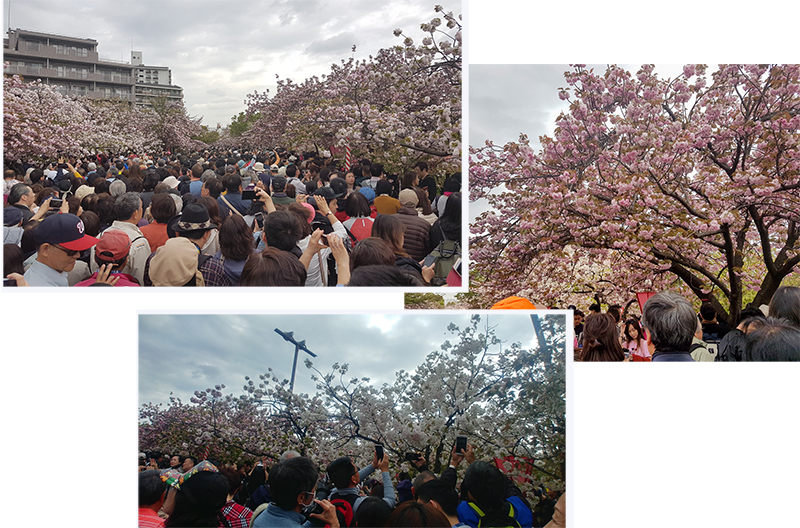 Heads and flowers, too many to be counted

Osaka Mint did not charge an entrance fee that could account for the huge mass of people visiting this place. It was a mistake to come on the first day especially during opening hour! A better time would be at about 10 am or 11 am. 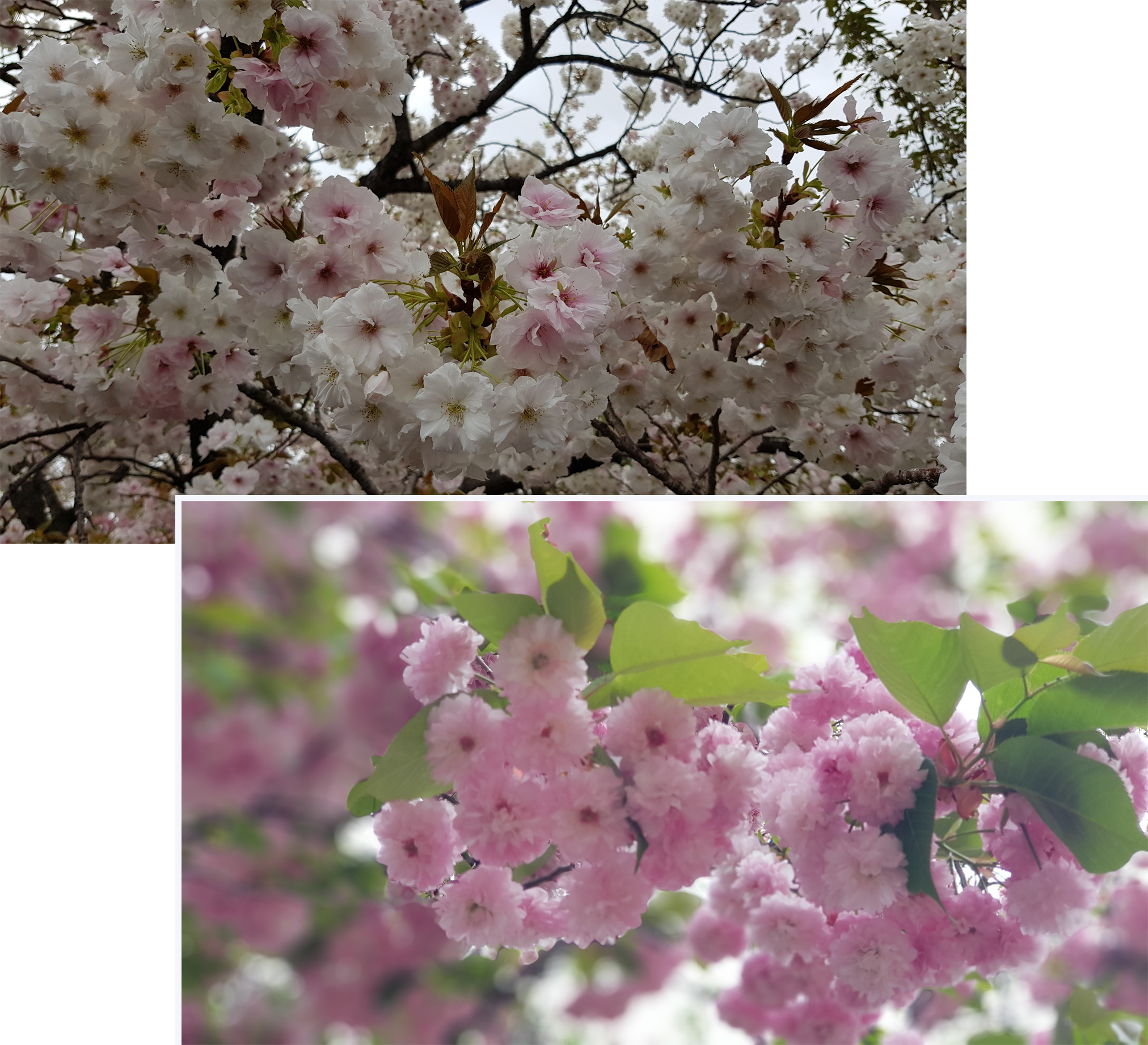 Surprising in such a crowded place we occasionally felt a strong breeze blowing through. Each gust of wind would dislodge numerous pink petals from their blooms and sending “pink snow” drifting into the delighted crowd.  Not only were there flowers over our head even the ground was littered with pink petals.

The walk through Osaka Mint compound was one directional. Staff controlling the crowd made sure everybody walked forward and left at the far end exit of the Osaka Mint. It was lucky that we had our google map to find our way back to our car. 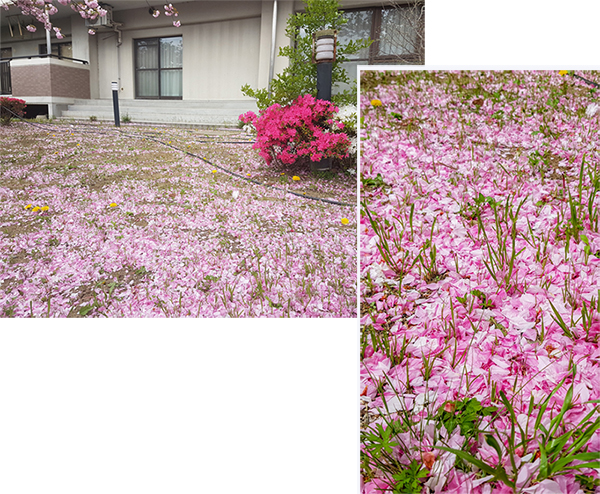 We drove from Osaka to Kayabuki No Sato (Thatched Roof Village). The drive took about 1 hour 45 minutes. At about 1.30 pm when we reached the village. 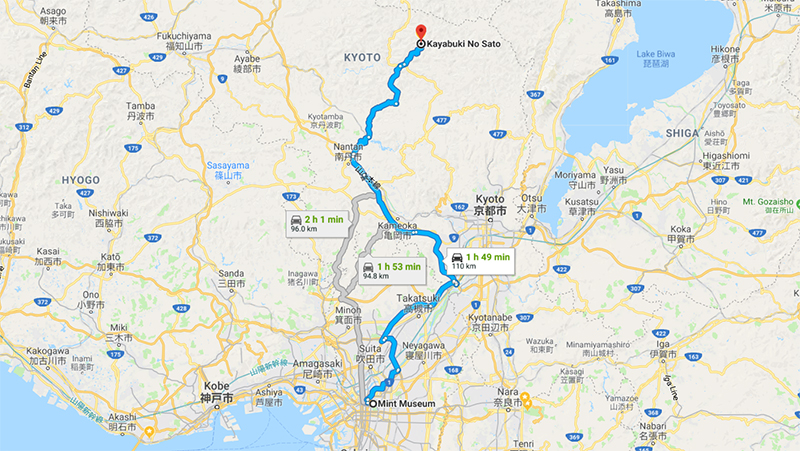 Route from Osaka to Kayabuki No Sato

We parked our car at a free carpark just opposite the road leading to the village. From across the road we could already see the unique thatched roof houses. It was a nice change from the crowded Osaka Mint. This village was serene and peaceful. The green trees and the high mountain forming the backdrop of the village was a refreshing sight, we could see so far and wide. 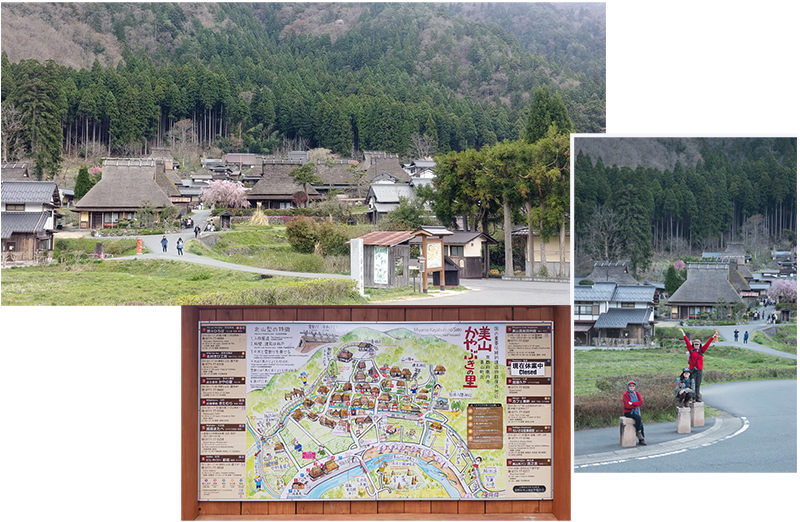 This was the second time Yat Thong and I visited Kayabuki No Sato and like our first time this traditional village was not overrun by visitors.  The cherry blossom this spring made the already picturesque villages even more stunning. 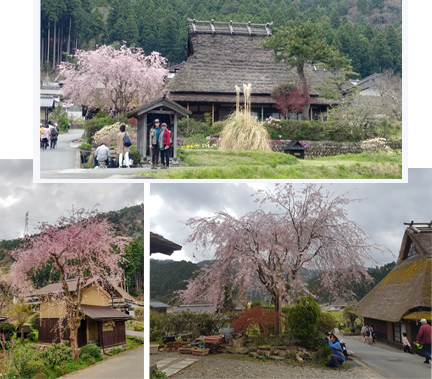 Cherry Trees blooming by the sides of thatched houses

As we walked among the traditional houses we met a group of artists  deeply immersed in “water coloring” the scene on their papers. We could not resist but walked from one artist to the next admiring their lovely creations from their perspectives. 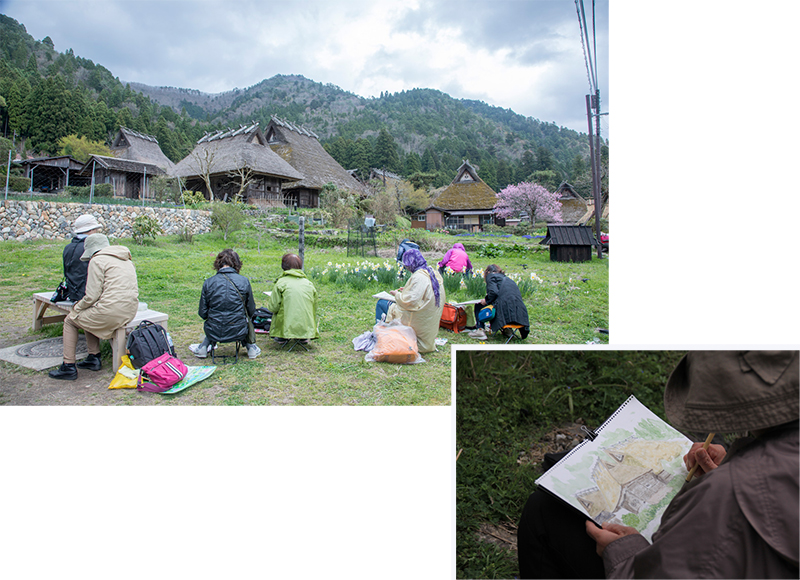 Beside cherry blossom, other spring flowers were also in full bloom. Beside pink flowers there were white, yellow, purple, red …. flowers. Interestingly though this was a “living village” we did not see many villagers. Occasionally we saw one or two seniors tending the flowers in their gardens. 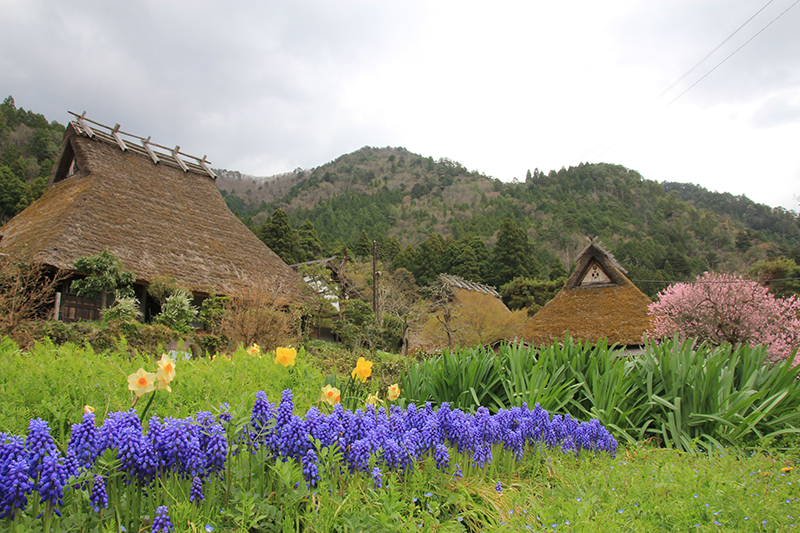 Spring Flowers at Kayabuki no Sato

At one end of the village there was a temple on a hill slope, I followed the path and went up. The temple looked pretty rundown so I did not want to enter it. On the high ground beside the temple  I had a good top view of the village. So lovely! 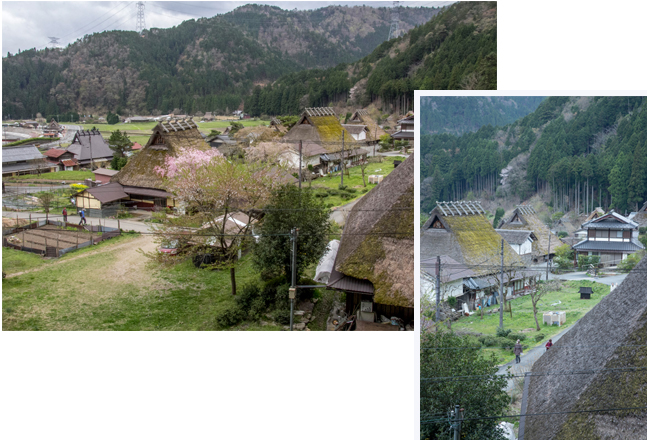 We left Kayabuki no Sato after more than an hour of exploration. It was time to proceed to Takashima near the Lake of Biwa where we would stop for a night. Along the way we passed two very stretches road where cherry trees bloomed beautifully. 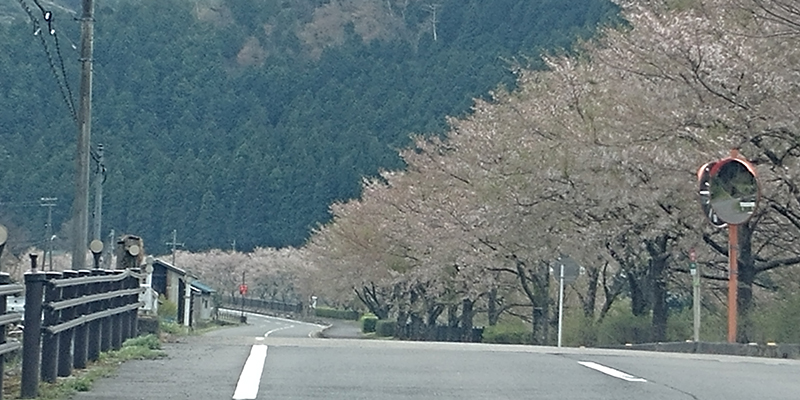 A stretch of cherry trees with light pink blossom 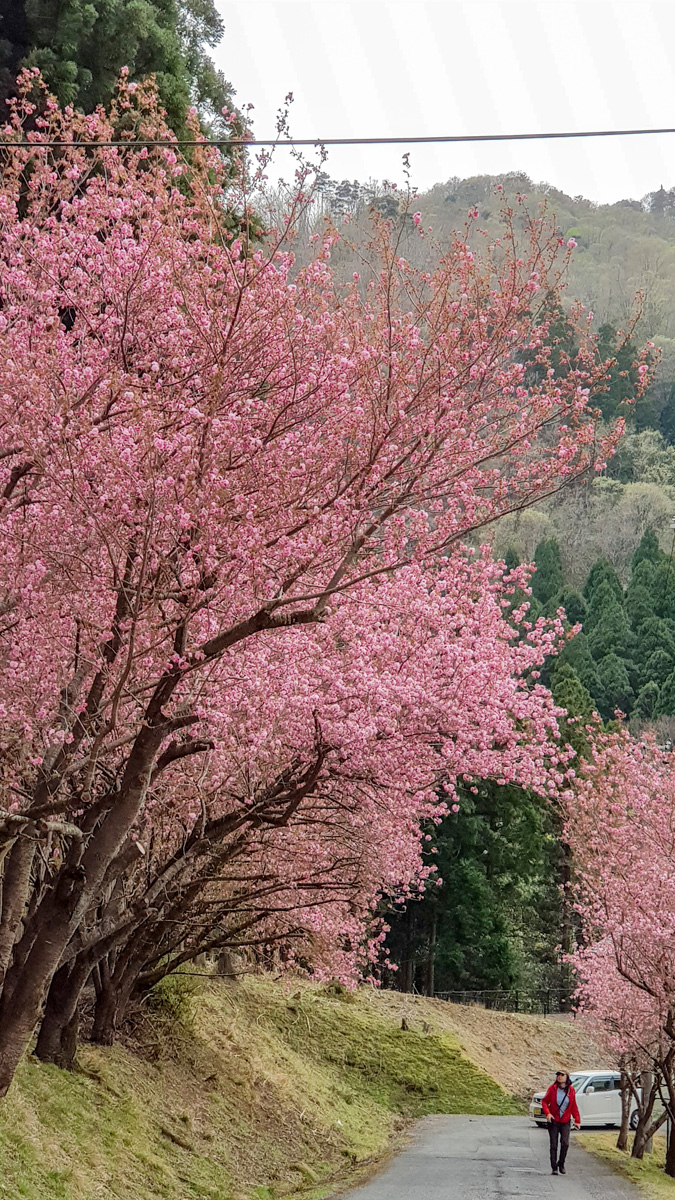 A stretch of cherry trees with lovely dark pink flowers

We were suprised when our host (of our accommodation for the night) told us that we had to drive north to the next station stop for dinner. Luckily it was only 4 km away.  Apparently the town where Shanshui House was located was pretty quiet and its restaurants closed early. The next station stop was Makino town central and only one restaurant was open for business, it was only 6.30 pm and the rest of the shops were already shut.

The restaurant staff did not speak any English but luckily Lin Ying understood some Japanese so we did not have too much trouble interpreting the menu. Our four meals came up to ¥3790, this restaurant did not have “seat charges”. 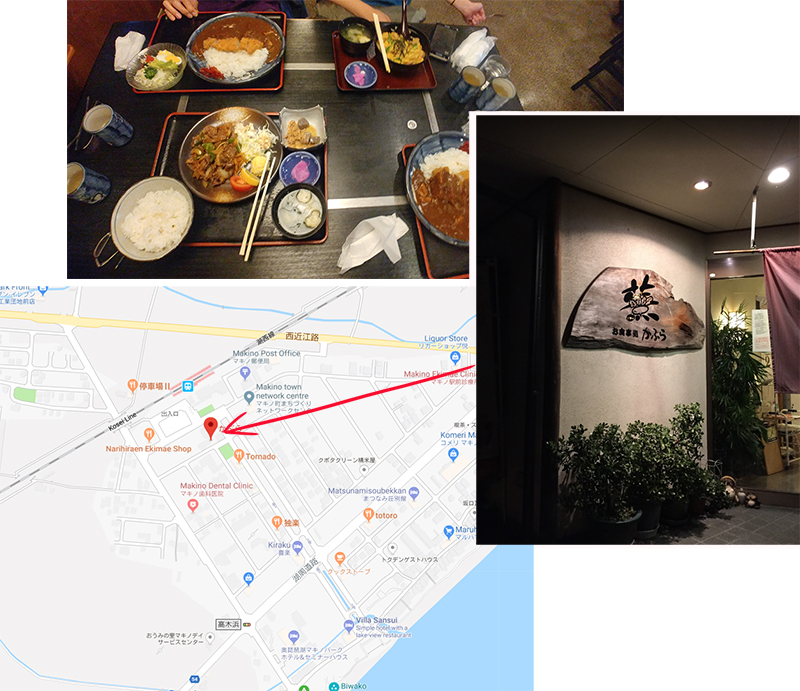 Our dinner at Makino Town

Our stay was at Shanshui House in Takashima near the top north west side of Lake Biwa, this accommodation was booked less than a week ago when we replanned our route. It was conveniently sited between two of our destinations and the price was within our budget. I booked a family room for ¥15000 at booking.com. 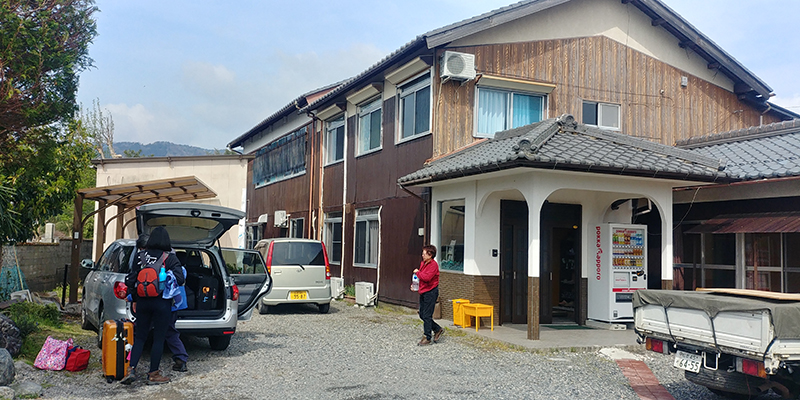 I did not like Shuishui House initially when we checked in. There were some maintenance work going on so there was some “banging” noises. When we were showed to our “big” family room it did not look like the pictures I saw on booking.com. The pictures gave the impression that the room opened out into a huge garden. This was not the case. On the long side of our room was four sliding doors which were adjacent to a long  common corridor, on the other side of the corridor were glass panel doors that faced a garden. The garden was under maintenance “not a pretty sight” and opening the sliding doors of our room to enjoy the garden view would mean no more privacy . 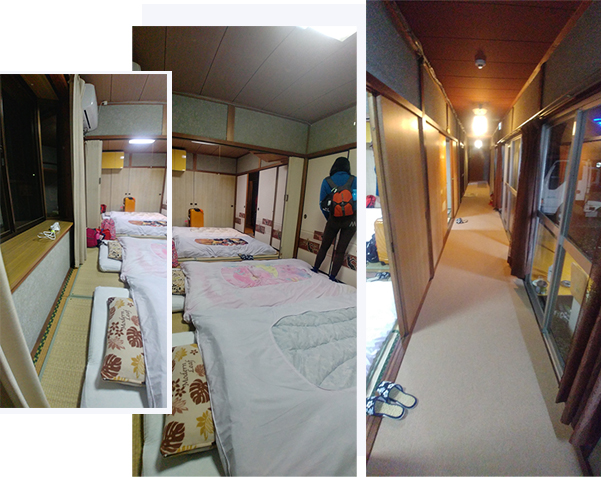 Our family room at Shanshui House

After we returned from dinner and on further exploring Shanshui house I changed my mind. Shanshui house was not as bad as it seemed. It had a number of spacious common areas such as the big well equiped kitchen, dining room, sitting lounge, washer and dryer. 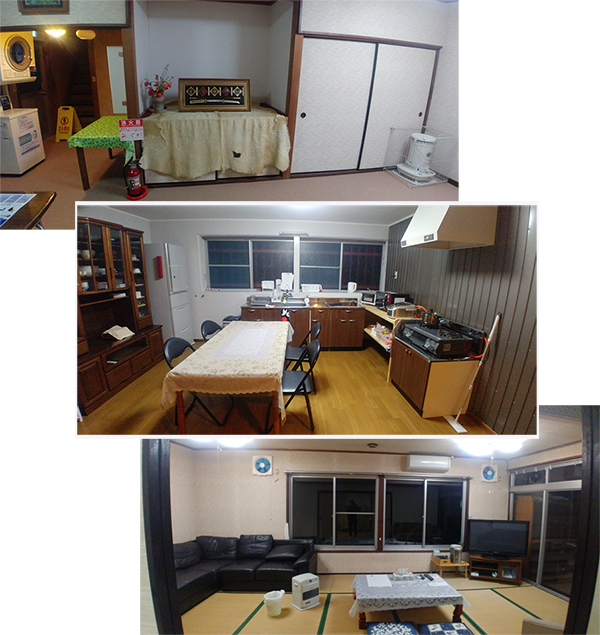 On the ground floor were two smaller bedrooms and our family room, the place was huge so we did not bump into the other occupants. Upstairs there were more rooms.

There were also two huge Japanese style bathroom on the ground floor. The nice thing was that the bathrooms had locked so we could have our bath in private. At night the weather turned cold so it was great that there was a warmer in the changing room and nice hot water in the bathroom/shower and we were able to take a relaxing bath. 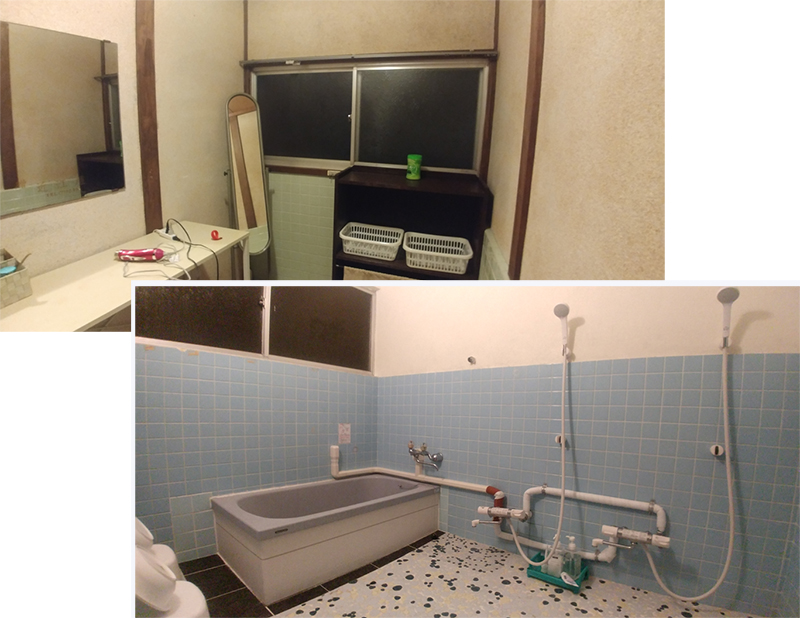 Bathroom and its adjacent changing room