The plan was to visit another Gassho-style village, Ainokura village in the morning. In the afternoon we would proceed to Takayama city and join the Takaya Sakura Festival. For the night we would be staying at a guesthouse on the outskirt of the city. 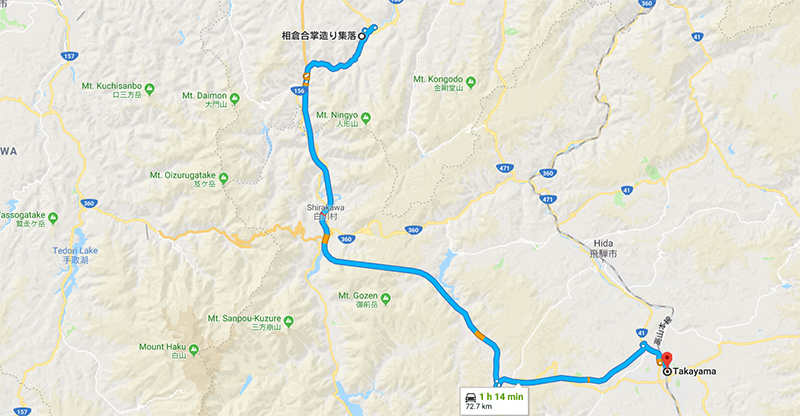 By End of The Day
We enjoyed our visit to Ainokura Historic Village very much, it was similar and yet different from Ogimachi Historic Village. In the afternoon we reached Takayama city and had great fun walking through the “celebration” street. It was a pity that the weather turned bad and the heavynrain caused the cancellation of the night parade of festival floats.

The guest house host seemed very surprised when we mentioned about using the shared kitchen to cook our breakfast. We guessed not many of her guests used the shared kitchen at all. But on the listing in booking.com it was stated that the guesthouse had a shared kitchen so we came prepared with food to cook. Since our host seemed uneasy with us using the kitchen I tried my best to cook as fast as possible and cleaned it up as best as I could.

We ate our breakfast in the shared dining room where tea and coffee were provided free. 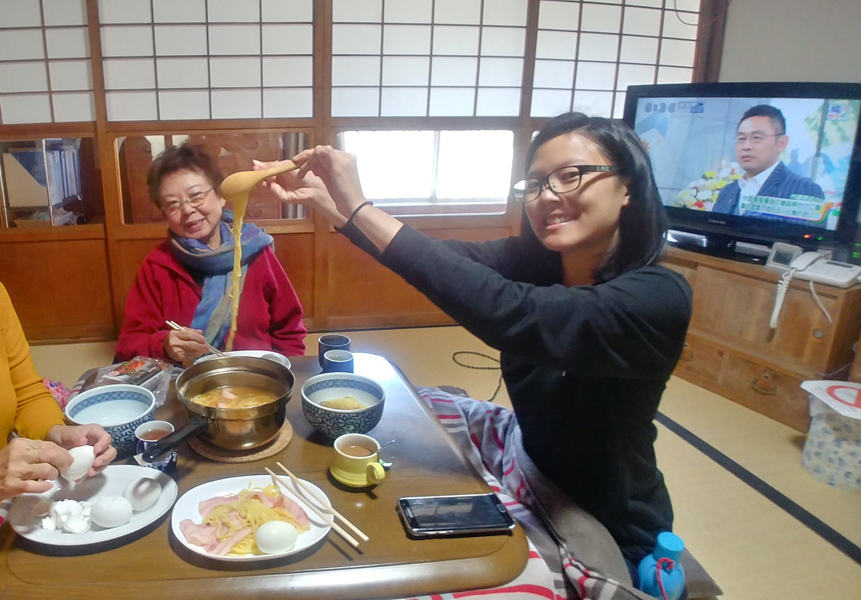 The dining room had a square low dining table in the middle of the room. It had this thick blanket under the table top and sitters around the table would use it to cover their legs. Surprise, surprise what was underneath the blanket or more accurately under the table? Beneath the table was a square hole where our legs extend into. The hole was pretty deep and at the base was a container filled with glowing charcoal. The heat from the burning charcoal warmed up our legs and kept our body comfortable warm. 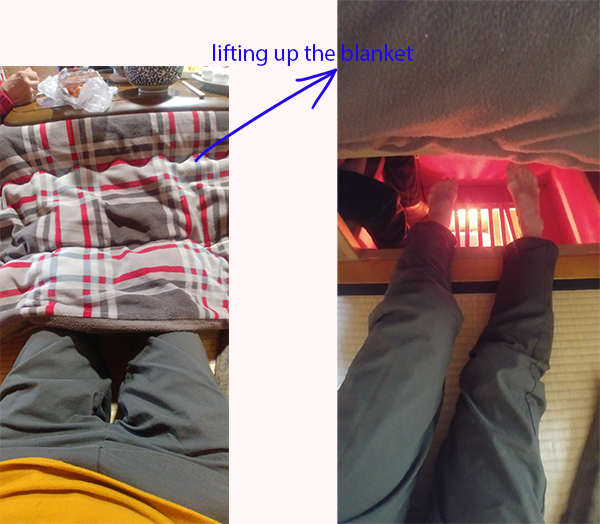 Now I understood why the host and her friend were huddled around the table the whole night long chatting for hours.

It was a very short drive from GuestHouse Yamashita-YA to Ainokura Historic Village just 7 km. In just 10 minutes we reached the Gassho-style village and the time was about 9.30 am. Even that early in the morning there was already a local at the carpark collecting ¥500 parking charge from us. 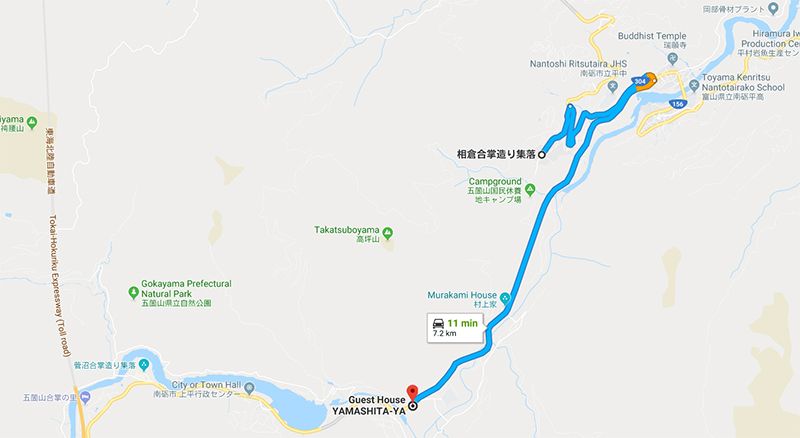 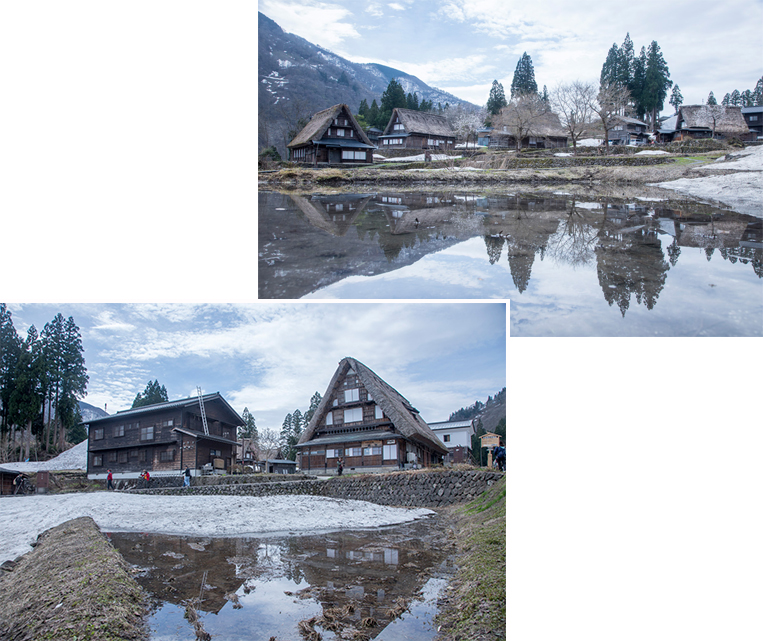 Of the three historic villages, Ainokura Historic Village was the most remote which accounted for it having  lesser visitors. It was also the largest of the villages with more than 20 Gassho style houses many of which still remained as private residences. There were not many trees with cherry flowers yet as the weather was still very cold at the village.  Though it was already Spring there were still many piles of un-melted snow. 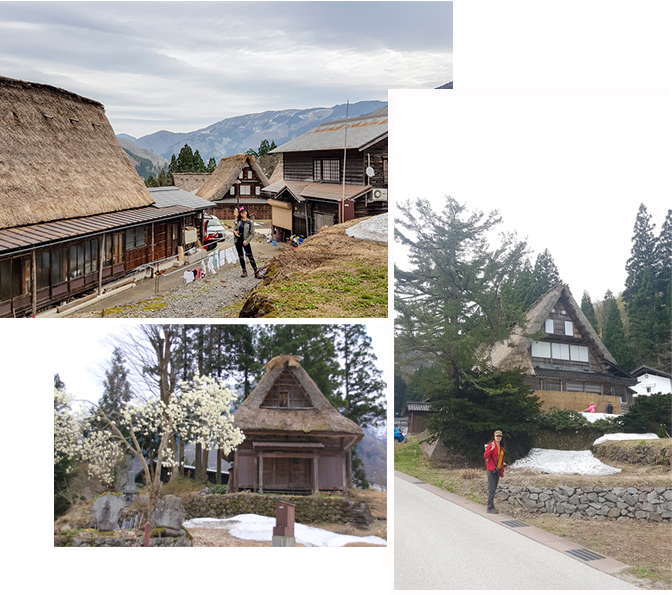 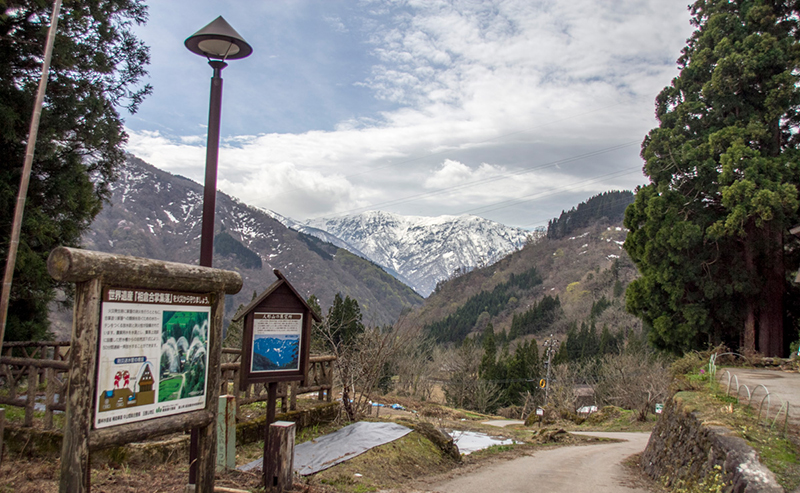 Our second destination for the day was Takayama City. From Ainokura Historic Village to the city was about 1.5 hour drive over a distance of 72 km. We were very excited about Takayama as this weekend was the Sakura Matsuri Festival!

Takayama Sakura Matsuri Festival (Spring Festival) was the festival of the Hie Shrine in the southern half of Takayama old town. Takayama festivals (Spring and Autumn festivasl) were ranked as one of top three most beautiful festivals in Japan.

In April when the cherry trees in Takayama was at its best the city held a festival where a dozen of festival floats (yatai) which were normally kept in storehouses went on display and paraded through the roads of the old town near to Hie Shrine. 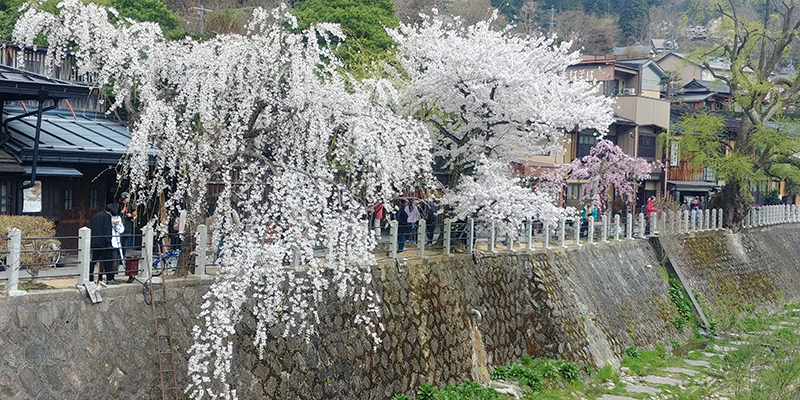 We set our GPS mapcode to Nakabashi bridge, famous vermillion colored bridge spanning across Miyagawa river where we were sure we could find the festival floats. As we got nearer to the bridge we found a road leading to it closed to traffic. It had became a pedestrian walk “for the day”. We had no choice but to loop back and parked quite a distance from Nakabashi bridge. 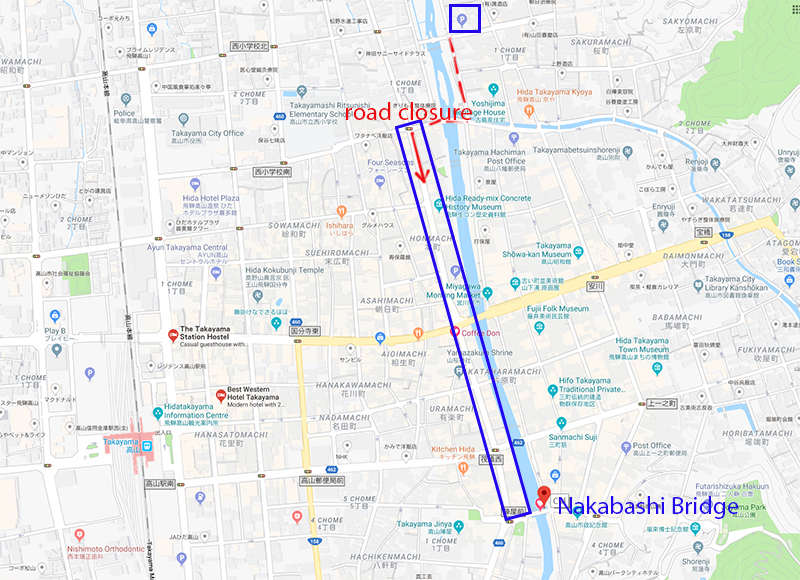 Though it was a km to the bridge the walk was fabulous as it was full of cherry trees. These flowers on the trees were in full bloom! It was very lovely. Many out of town visitors had came to Takayama to celebrate the festival so the old town was very crowded. 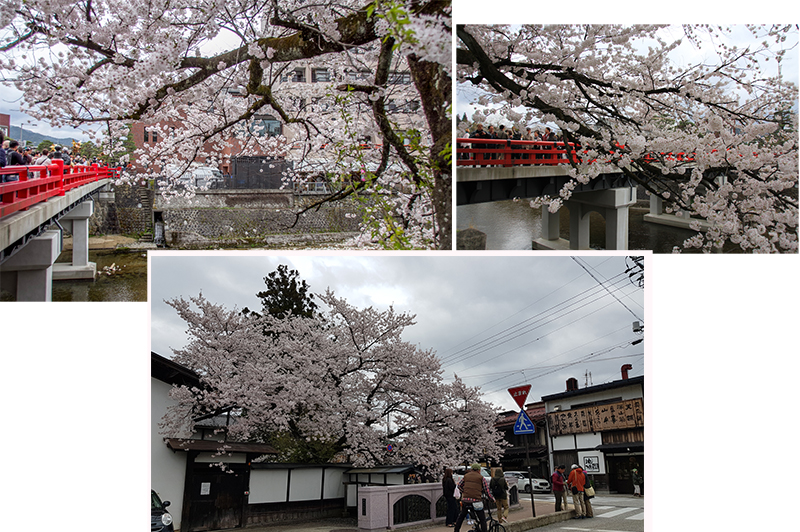 The cherry trees in Takayama were in full bloom

We turned into a road running parallel to the river, this road was closed to traffic and turned into a “food” street during the festival. We were surrounded by hundred of food stores. We drifted from one store to the next, buying street food from the stores on the left and then on the right. They did not tasted fantastic but it was fun to see the “store chefs” prepared and cooked the food. 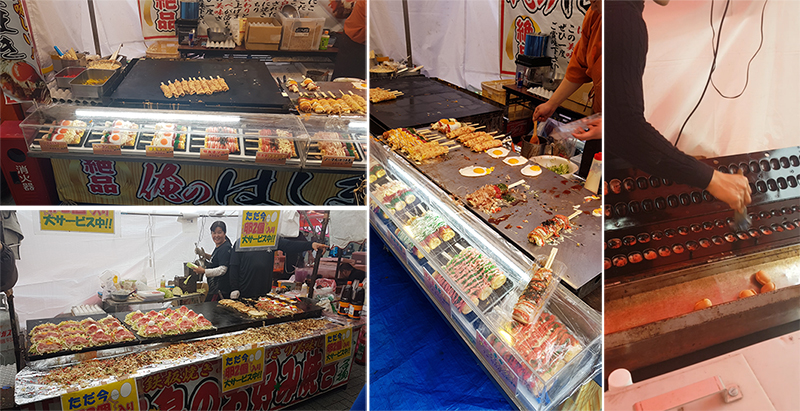 Soon we reached DON Coffee, a shop along long the street. We stopped and pushed it door that led into the shop. We were here many years ago and  we liked its cakes, coffee and the quaint atmosphere of the shop. Unfortunately today  the place was “packed”  with customers. 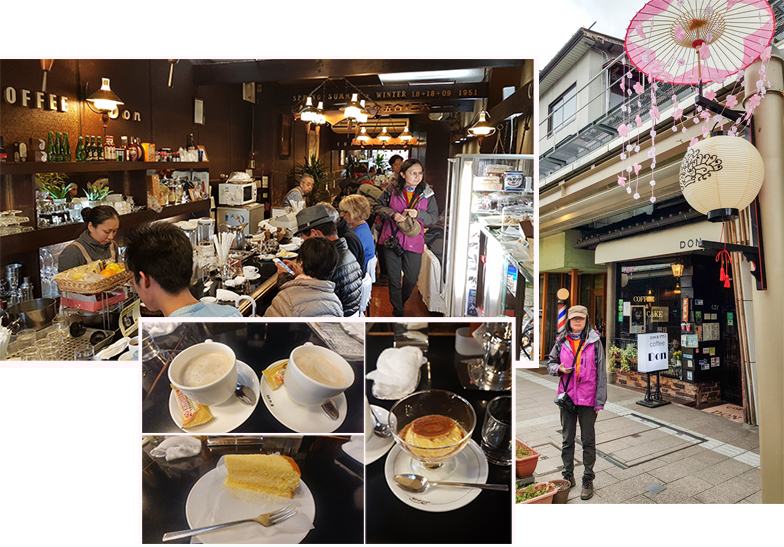 We managed to get four seats by the counter and ordered coffee, cakes and custard. The interior of Coffee Don still looked the same after five years. It was the ambience that was different, today’s noisy atmosphere was a huge contrast from the quiet cold autumn air when we were here years ago.

After our coffee break we walked on and soon we came to a square packed with people. So packed that we could not walk forward or turned back. Over the hundreds of heads we saw three festival floats. Everybody was pushing closer trying to get a better view of the floats.

The festival floats were beautiful even from far we could see that they were full of intricate cravings. These floats had a long history and they dated back to the 17th century. There were supposed to be 12 yatai but we had no idea where were the rest. 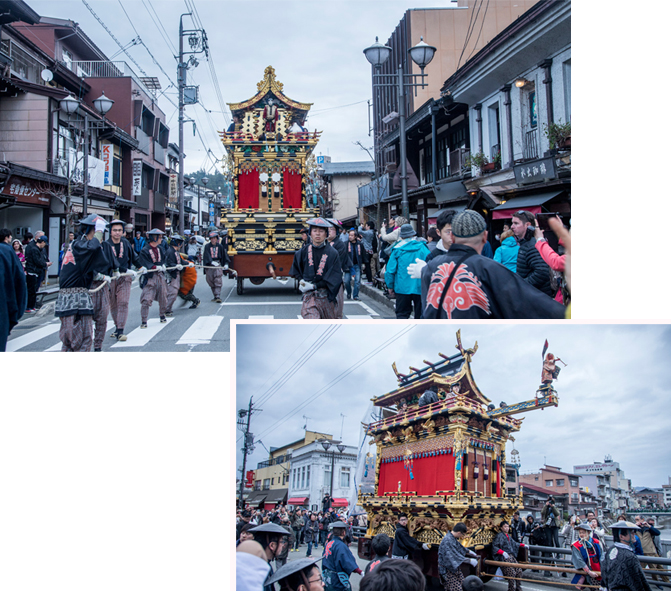 The sky had been pretty gloomy for the whole day and the forecast said it would rain in the evening! The night parade of the yatai would be cancelled if there was rain. It was a great shame because at night these floats looked very different from its”day” look. Each float would be lighted up by hundred of small lanterns and would looked like a golden sparking treasure chest.

Our stay was at Pension Hanatsubaki some 6 km from Takayama old town. I booked this hotel via its website on google map after exhausting my search on booking.com, agoda.com and hotel.com etc etc. It was early December 2017 when I finalised my route and decided to be in Takayama during its Spring Festival which fell on the 14th and 15th of April 2018. Unfortunately all the affordable hotel rooms in the town were already booked. I had to “walk” on google map in search of “hotel” and finally found Pension Hanatsubaki on the outskirt of the city. 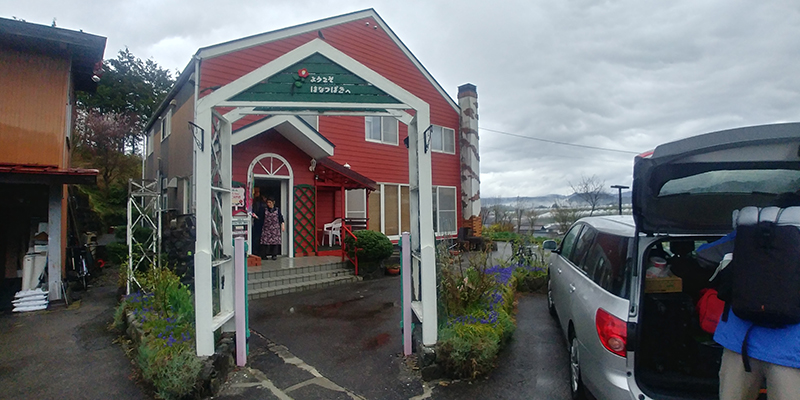 Pension Hanatsubaki on the outskirt of Takayama city

A family room for four without ensuite toilet for one night costed ¥29400! Outrageously expensive but still relatively cheaper than whatever that were left and still within easy reach (by car) of Takayama old town. Our plan was to be in the old town for the night parade of the festival floats. The parade would ended at about 9 pm and after that we would not have to travel too far to our accommodation.

At about 4 pm when we were still in Takayama old town, it began to drizzle and all the floats were taken off the street to protect them from the rain. These floats were treasures, they were antiques and very precious to the city. We left the old town and checked into Pension Hanasubaki at about. At the pension we were shown to a room on the ground floor. 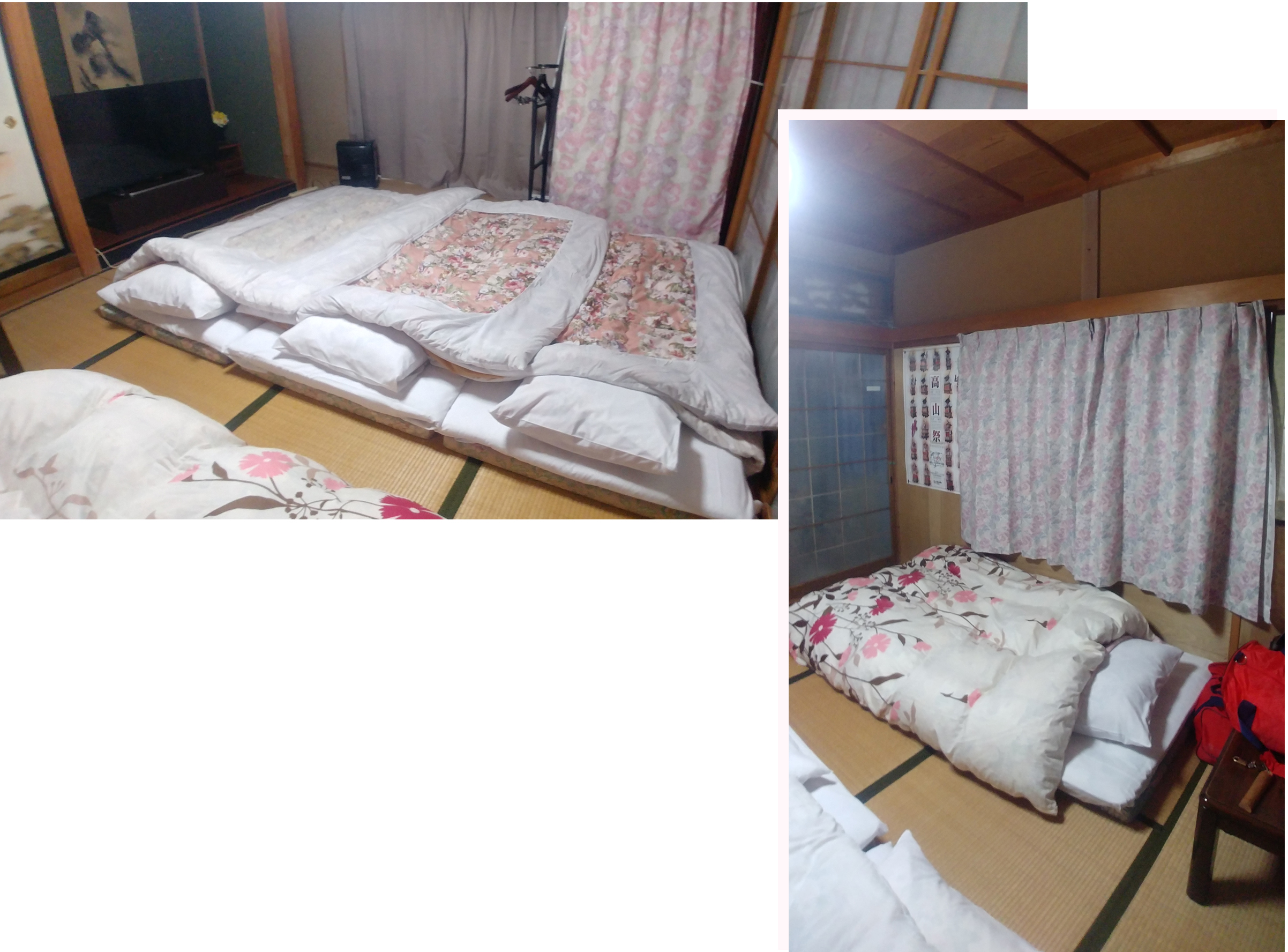 Our family room at Pension Hanatsubaki

The room seemed very different from the one I remembered seeing from the website. It was supposed to be a western room with four beds. Four months ago when I was booking the room, its website was still not ready to accept reservation so I emailed the owner and requested for a room for four. He quoted me a price of ¥7350 per person for one night in a room for four. He did not specifically described the room and I assumed it was the only four-person-western-style-room shown on his website.

The room given to us was not in the main building but in an annex next to the main building beside the owner’s room. In fact we got a feeling that the owner gave up their room and stayed in a tiny room beside our room. We got that feeling because there were several cupboards with stuff (clothers) inside and a sign that said “Sorry, please do not open”. Besides that another sign on a door that led into a short corridor (2 metre long) joining the main building to the annex stated “No entry – staff only”. Sigh….I felt cheated for not being given a proper guest room. But since the room was good enough for four and we knew there would be nowhere else to go we just have to accept the room. 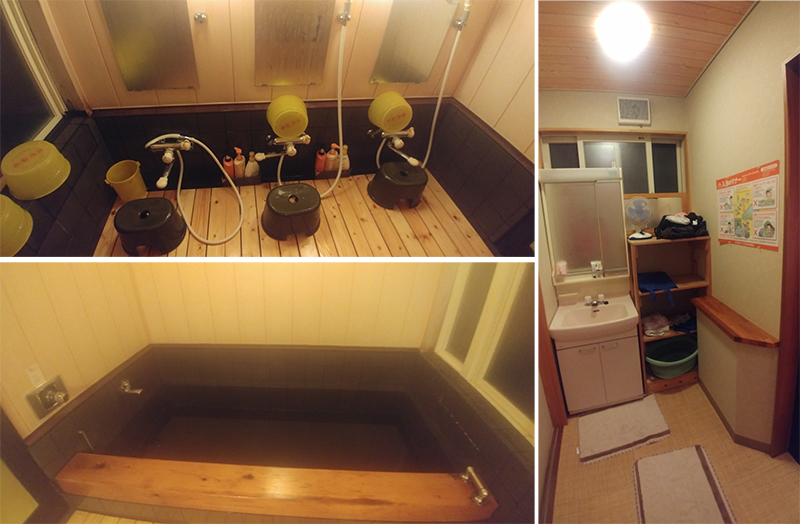 There were two shared Japanese bathrooms on the ground floor of the main building just a couple of metres from our room. The bathrooms were clean and nice and the had locks so we were able to bath in privacy!