Our original plan was to head to Val d’Orcia in central Tuscany. But after meeting our nephew we decided to make a slight detour to Siena Historic City before going to Val d’Orcia. The first part of the journey to Siena would be 73km taking slightly more than one hour and the second part of the journey to Val D’orcia would take about another one hour for about 58 km. 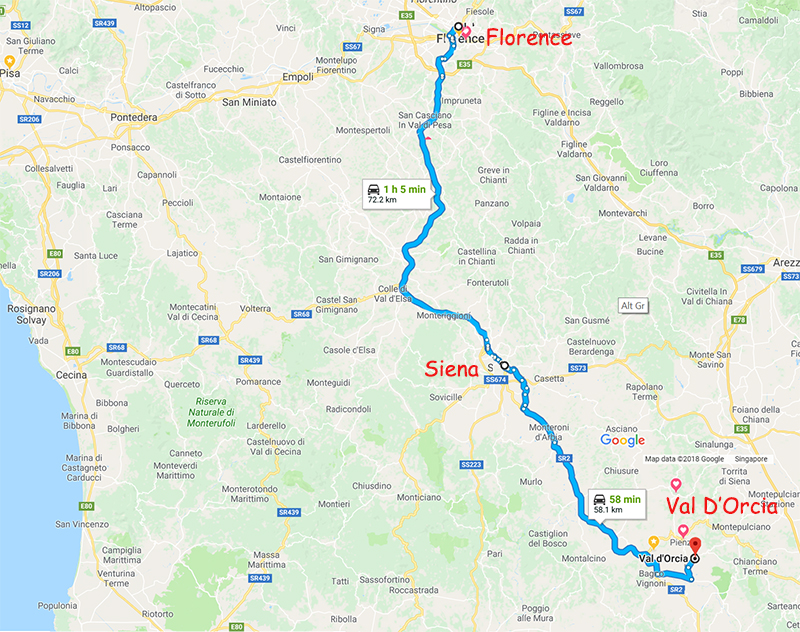 By the end of the day
Siena Historic City was uniquely beautiful. It was very different the the other Italian towns we had seen so far. It was not as huge as Florence and had its own charm and characteristics, definitely worth the effort to detour.

From our quick research on Siena just one day before visiting it we knew that its historic center had been declared by UNESCO a World Heritage Site. It was famous for its cuisine, art, museums, medieval cityscape and horse races (held twice a year).

We also found out that the centre was located on a hill which would mean a great deal of trekking up to it. Luckily we also found that there was a car park “San Francesco” which was near an escalator that would transfer us up the hill to the center. 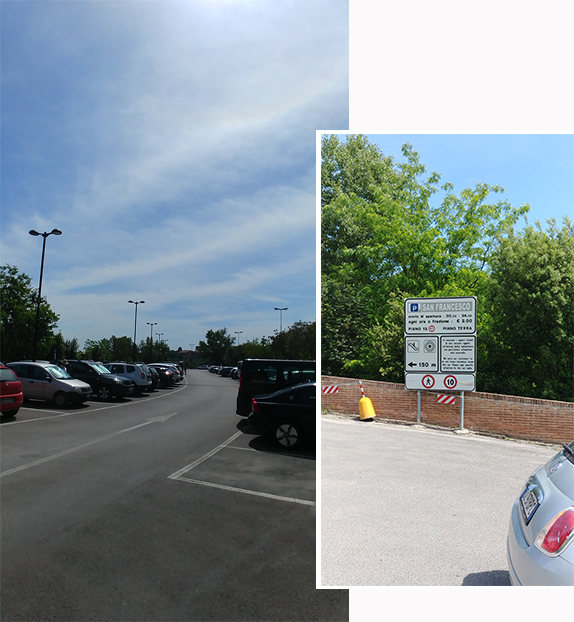 We arrived at San Francesco Carpark at about 11 am, the carpark (co-ordinates : 43.322052, 11.338132) was not difficult to find. The parking charges was €2 per hour. From the carpark was a very short walk of 5 minutes to the escalator. The escalator was housed in a brick color building, once we entered the glass door we saw the escalator immediately. 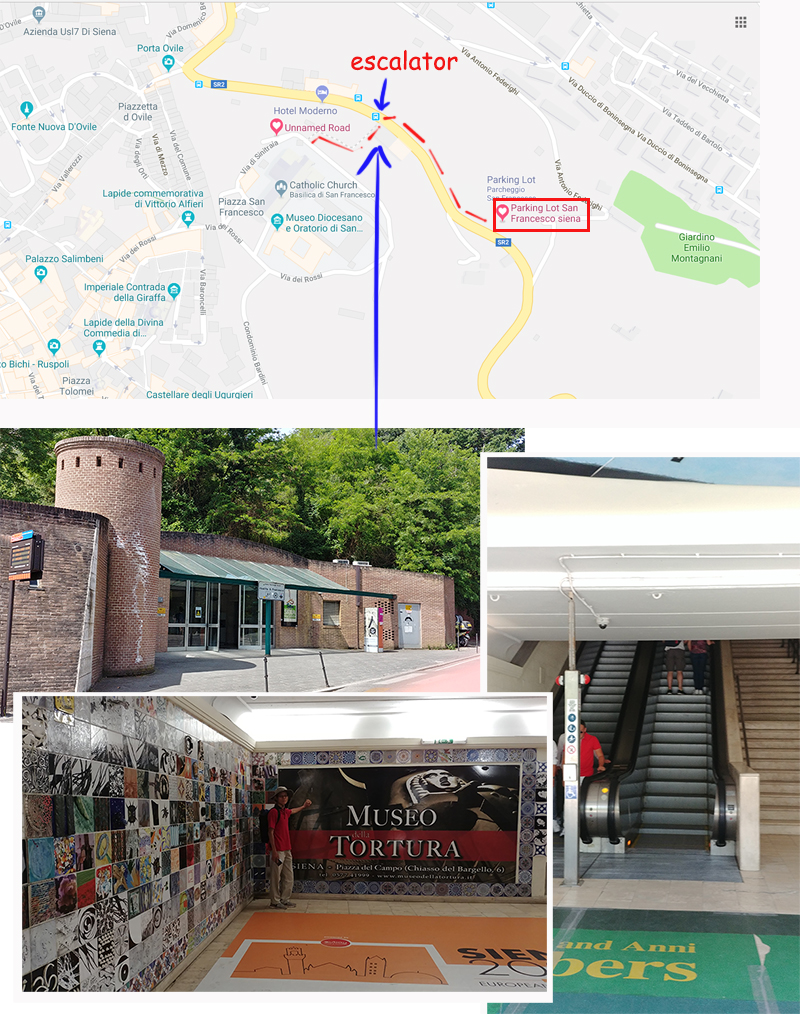 The top of the escalator brought us up to a street in the historical town. As we walked toward the center, the place got more and more crowded. The town was full of houses and shops and  walking on its “stone” lined streets we seemed to have went back in time.

As we walked along the row of shops we saw a pathway/steps, sort of a covered lane that went downward. We walked down the steps and was so surprised that it ended in a huge open square. The square was “Piazzo del Campo”. 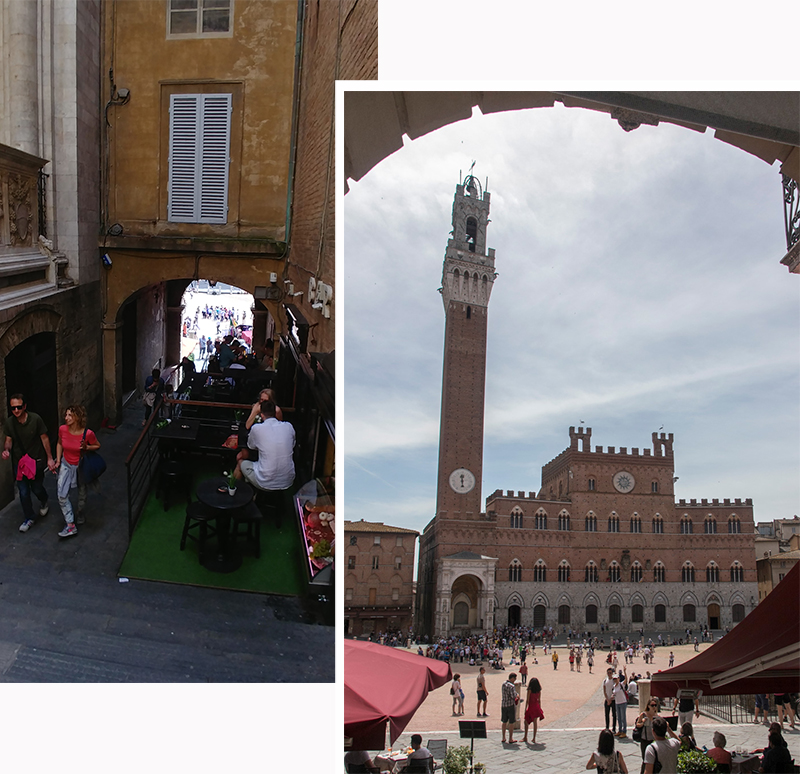 The piazza was huge! The most prominent building facing the piazza was Palazza  Pubblico (town hall/palace) with it tall bell tower. Twice a year Palio (horse) races were held in the piazza. 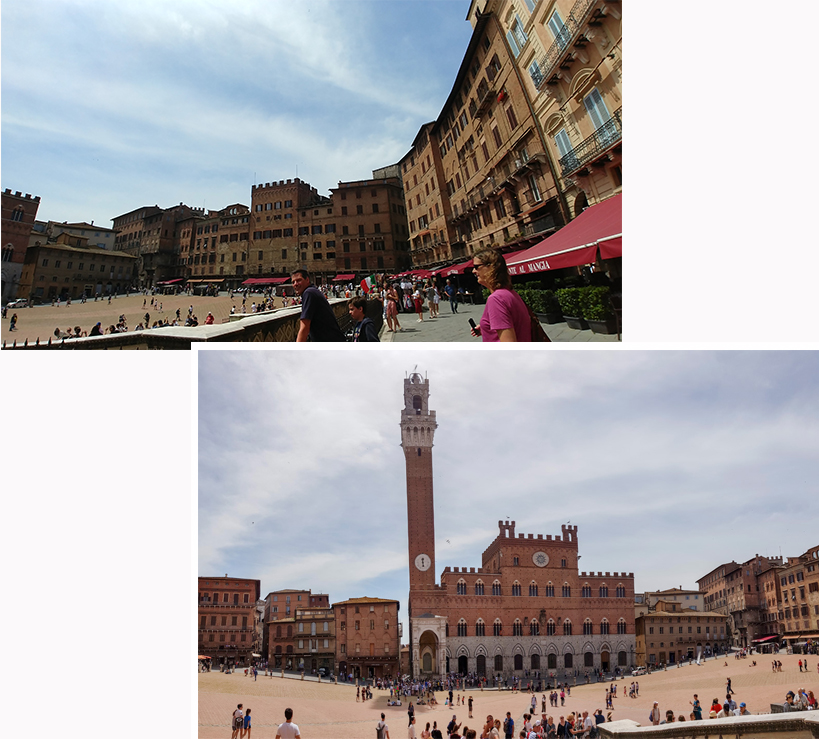 A short distance from Piazza del Campo was another magnificent building the Duomo of Siena.  From the side of the Duomo we walked down a lane which led us downhill. It was on the steps that we saw a different side of the historical town. All the houses on the other side were yellowish brown in color and the Bascilla Cateriniana San Domenico loomed magnificently over them.

We followed a brick path to walk to the Bascilla side of town and from that side we could see the dome and tower of Duomo of Siena peaking over the roofs of all the town houses on the opposite side. 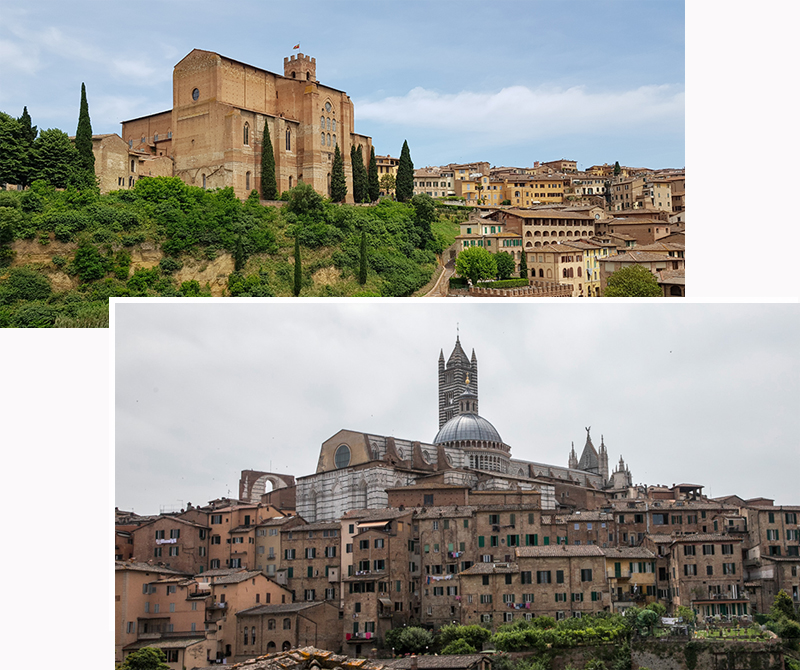 Our visit to this historic town ended with coffee and ice cream at Nuovo Caffe Greco. When we left this place we not only wanted to carry the memories of its scenery but also the savoury taste of its coffee, icecream and cakes. 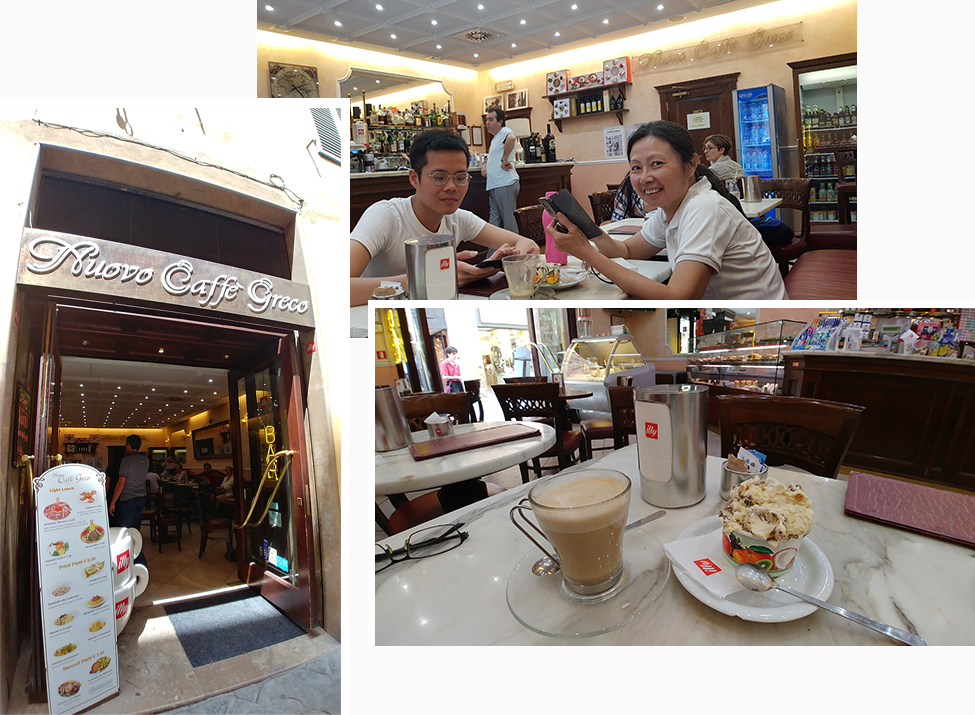