Our plan for the day was to visit two destinations, the first was Stoos Ridge and the second was Harder Kulm. It would be a short driving trip to Stoosbahn (in Schwyz-Schlattli). There we would park our car before going up to the ridge via funicular and chairlift. For our second destination we would need to drive about one and a half hour over a distance of 110 km to the foot of Harder Klum.

Our stay of the night was at Interlaken which was only a short distance from Harder Klum.

By End of the day.
We did not completed the entire Stoos Ridge Trail hike we only trekked half of it. Anyway we still had a great time. We were at Harder Klum at about the time the sun was setting and saw an unforgetable view. 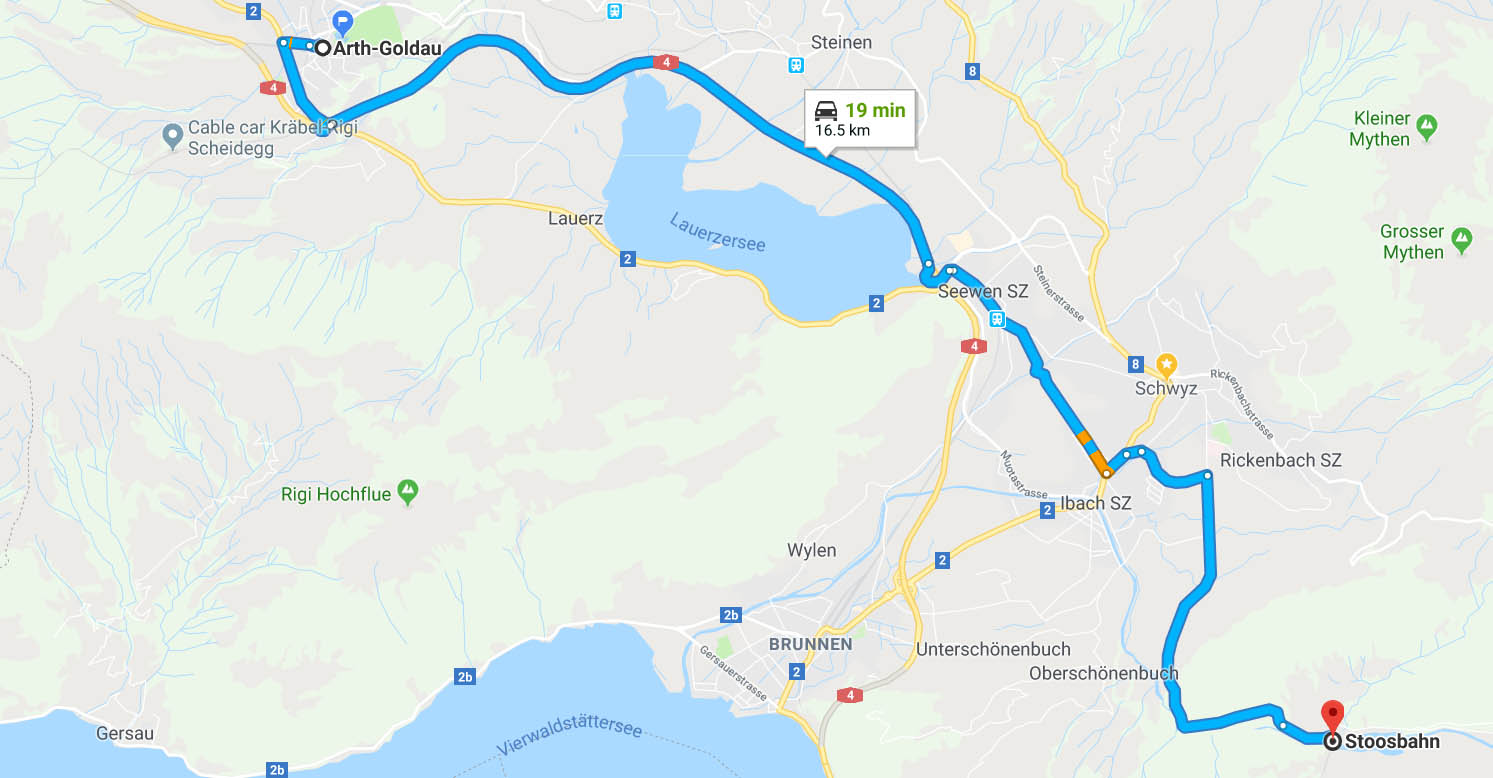 Just a couple of km to our destination there was a blockage-detour sign on the road. Oh no! A detour would easily mean another 10 km but we were less than two km from our destination! The road in front looked fine so why the need to detour.

We skirted the detour sign and continued our drive ahead slowly looking out for the cause of the “detour”. Soon we saw a van and some police cars ahead. There was a sign that said “Oelspur” (oil spilled). Apparently there was a small accident upfront involving a motorcycle resulting in some oil spill on the road. The police were cleaning up the road. We waited till the cleanup was done and a wave from the officer-in-charge to drive through! 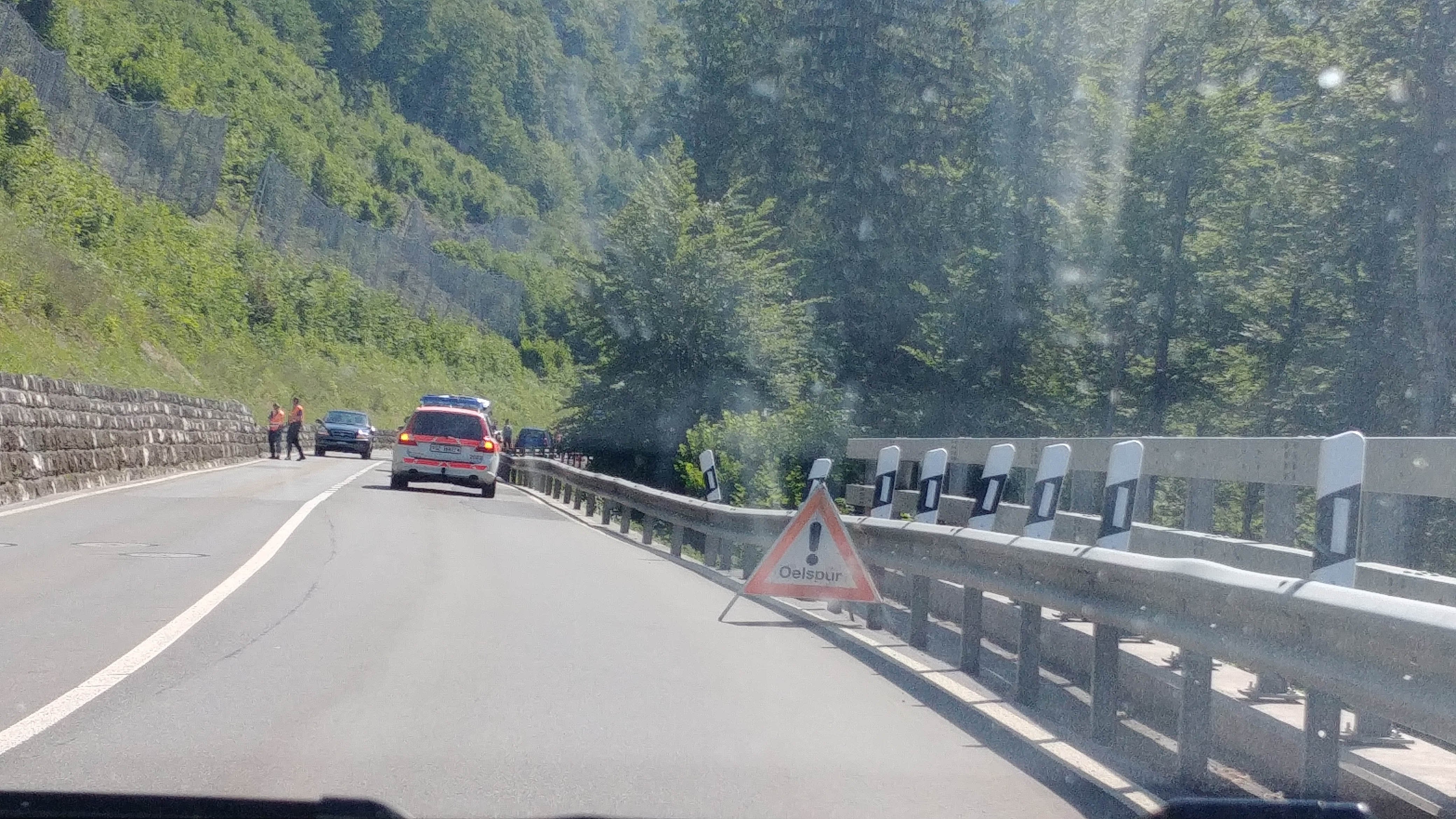 We reached Stoosbahn (station), there was a carpark just outside the station but it was meant only for drop off. The carpark was opposite the bahn (station) up a slope. We parked and took our parking ticket and went down to the station to buy the funicular tickets. 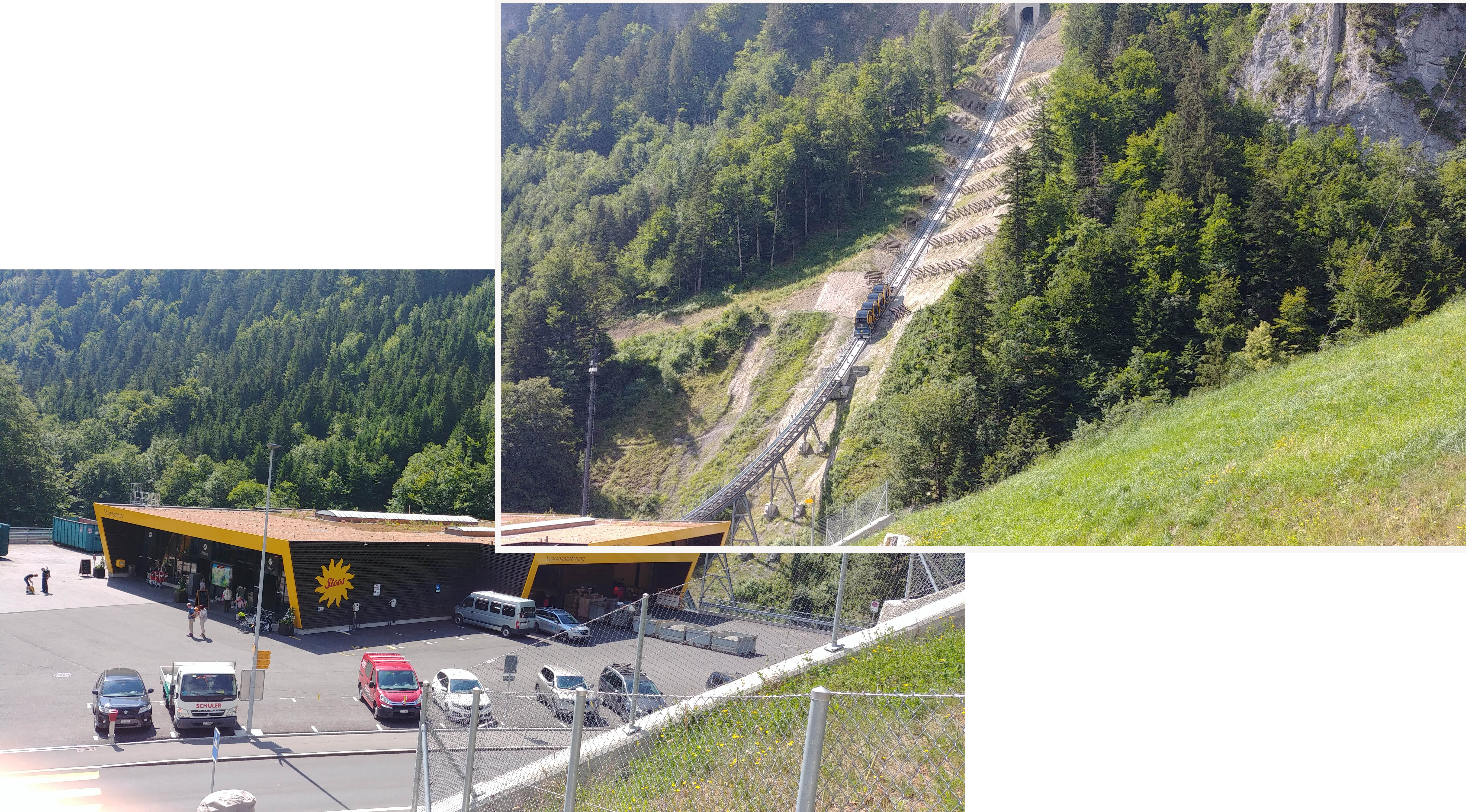 We walked into the ticketing counter to enquire about the tickets but was told that the Kingenstock chairlift was not in operation due to bad weather. We had no choice but get only return tickets to Stoos and return ticket between Stoos and Fronalpstock. After showing our passports and Swiss Half Fare cards we purchased the half price tickets. The half price ticket costs were CHF11 per person (return between Stoosbahn and Stoos) and CHF24 per person (return between Stoos and Fronalstock)

The funicular car was not like any other funicular car that we had seen it was so futuristic looking. It was almost 360° seethrough!. 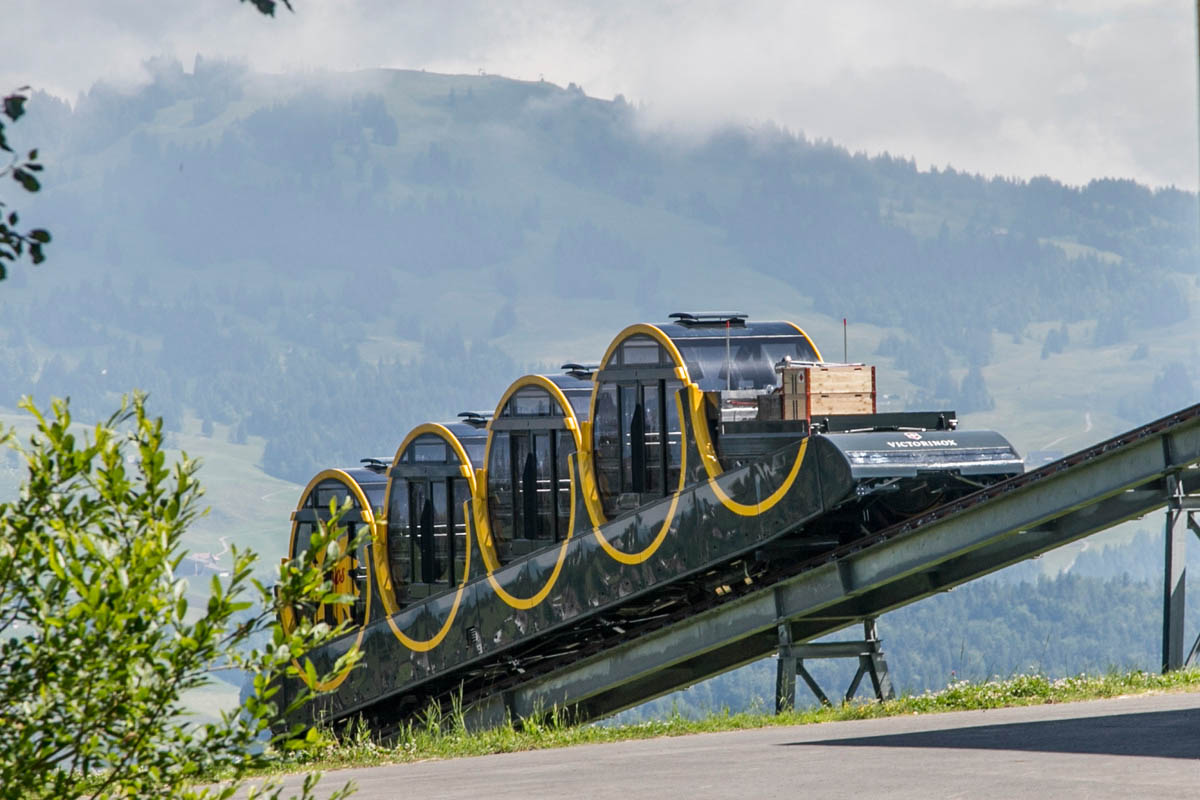 The ride from Stoosbahn to Stoos was about 4 to 5 minutes covering a distance of 1740 metres ascending an elevation of 744 metres and was considered the world’s steepest funicular. Each cabin could sit up to 34 people and each hour 1500 could be transferred in one direction.  The funicular mountain-station stopped directly in the centre of the village (Stoos). This funicular took 14 years to plan and implement and started operation in 16th December 2017, only six months ago.

The funicular car arrived and we entered the lowest cabin. How we wished it was not so crowded anyway we managed to get a standing place beside the glass windows. While ascending the car past through two rock tunnels on the slope. 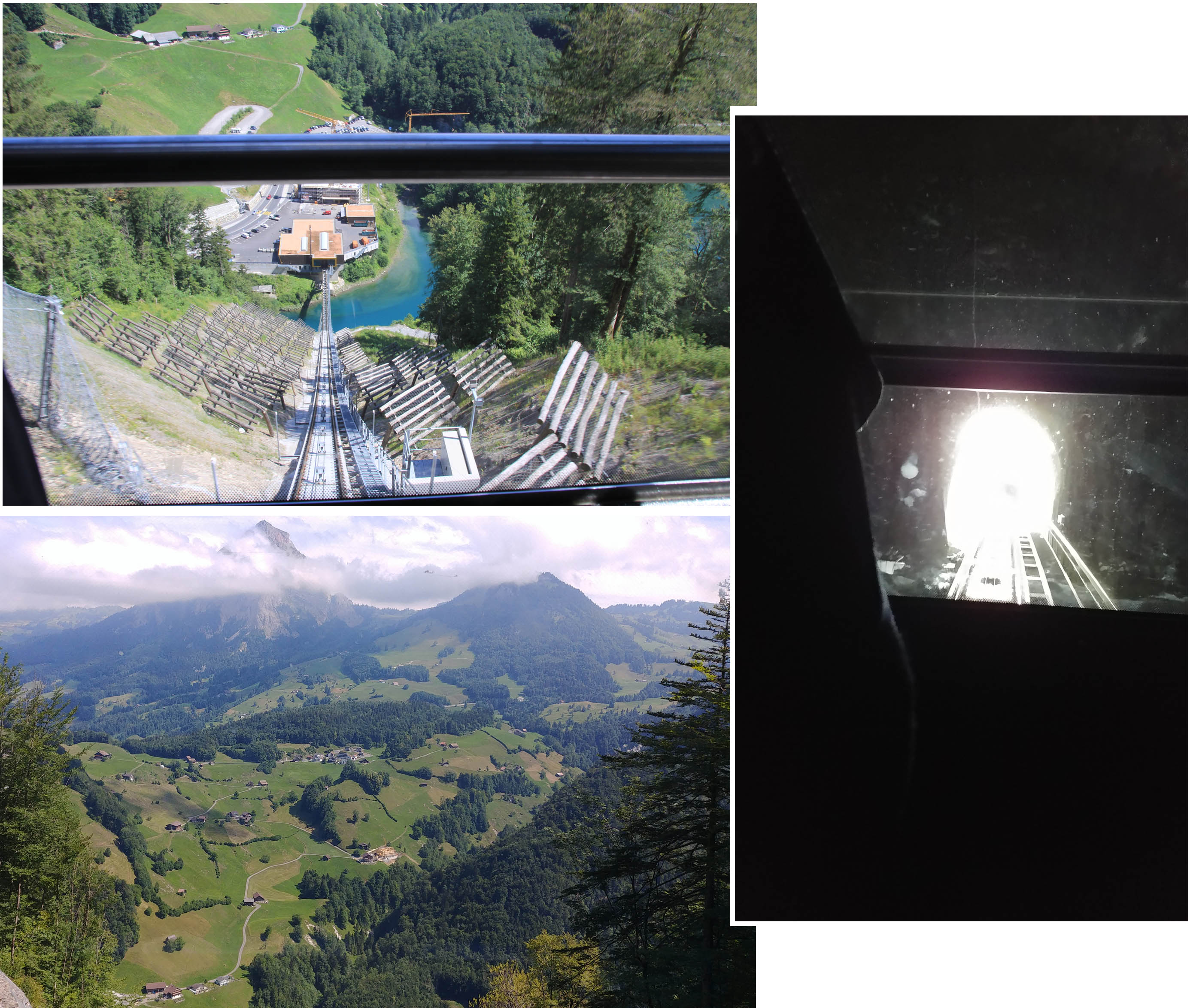 On the way up to Stoos

We exited the mountain-station and walked into the center of Stoos.  Stoos was a village on an alpine plateau. There were clusters of buildings over a few places and many were hotels. We stood by the funicular station to observe the funicular cars going up and down.

Funicular mountain station in the center of Stoos

We walked for about 500 metres to Fronalpstock Chairlift station. The chairlift could take up to four person per chair but since there was not many visitors going up to Fronalpstock we got the entire chair to ourselves. This was the first chairlift we came across that had a liftable cover. We left the cover up as we ascended to Fronalpstock.

At Stoos the weather was fine and nice but as we ascended we could see more and more misthe The “higher” sky looked blurry. We just hoped that the view at Fronalpstock would be clearer than the view we saw at Rigi Kulm the day before. 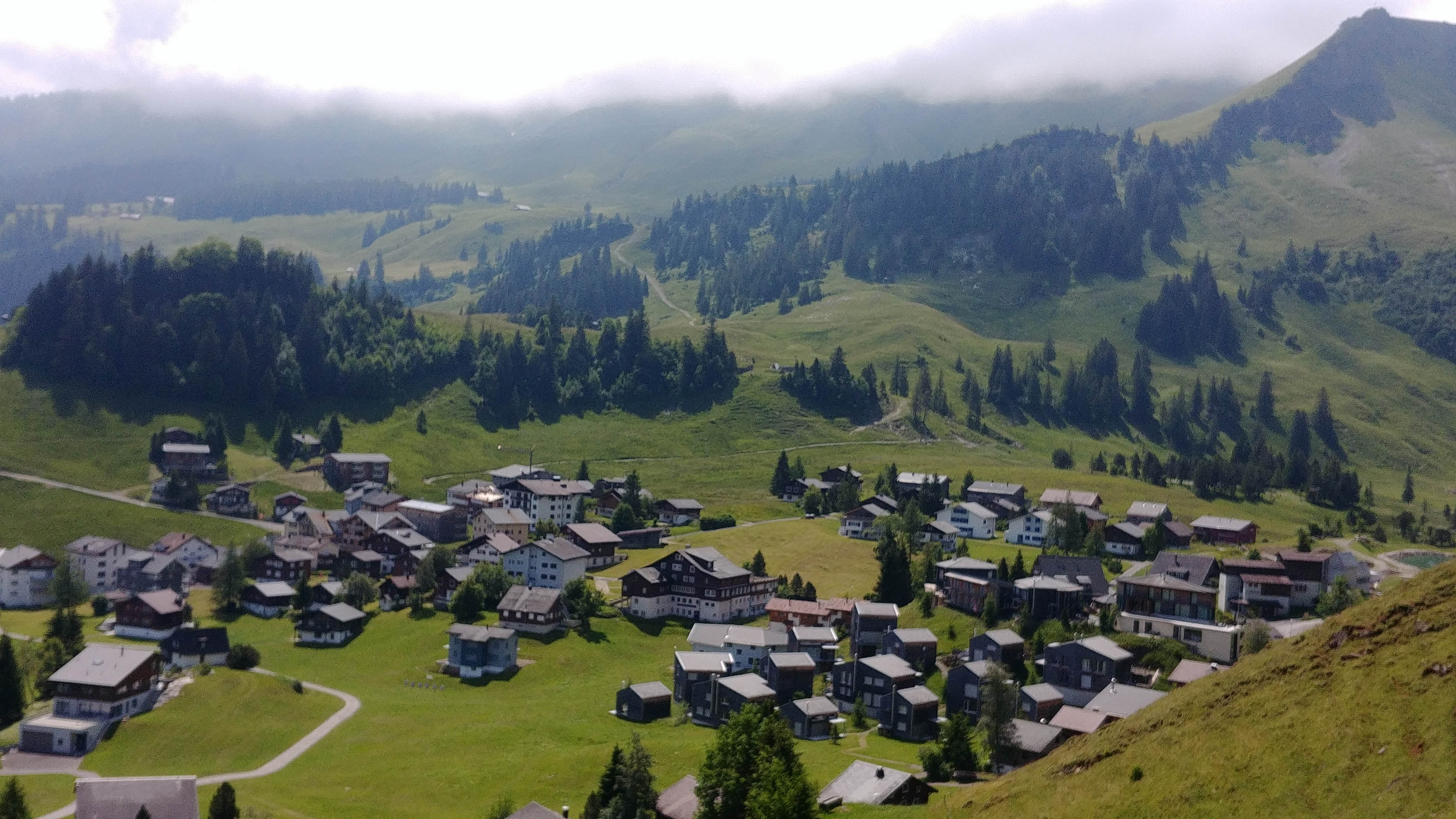 Stoos as seen from Fronalpstock chairlift

By the time we reached Fronalpstock the mist was pretty heavy. Standing on the observation deck we were supposed to be able to see Lake Lucerne and Mount Rigi, unfortunately layers and layers of mist kept drifting in cutting off the view. 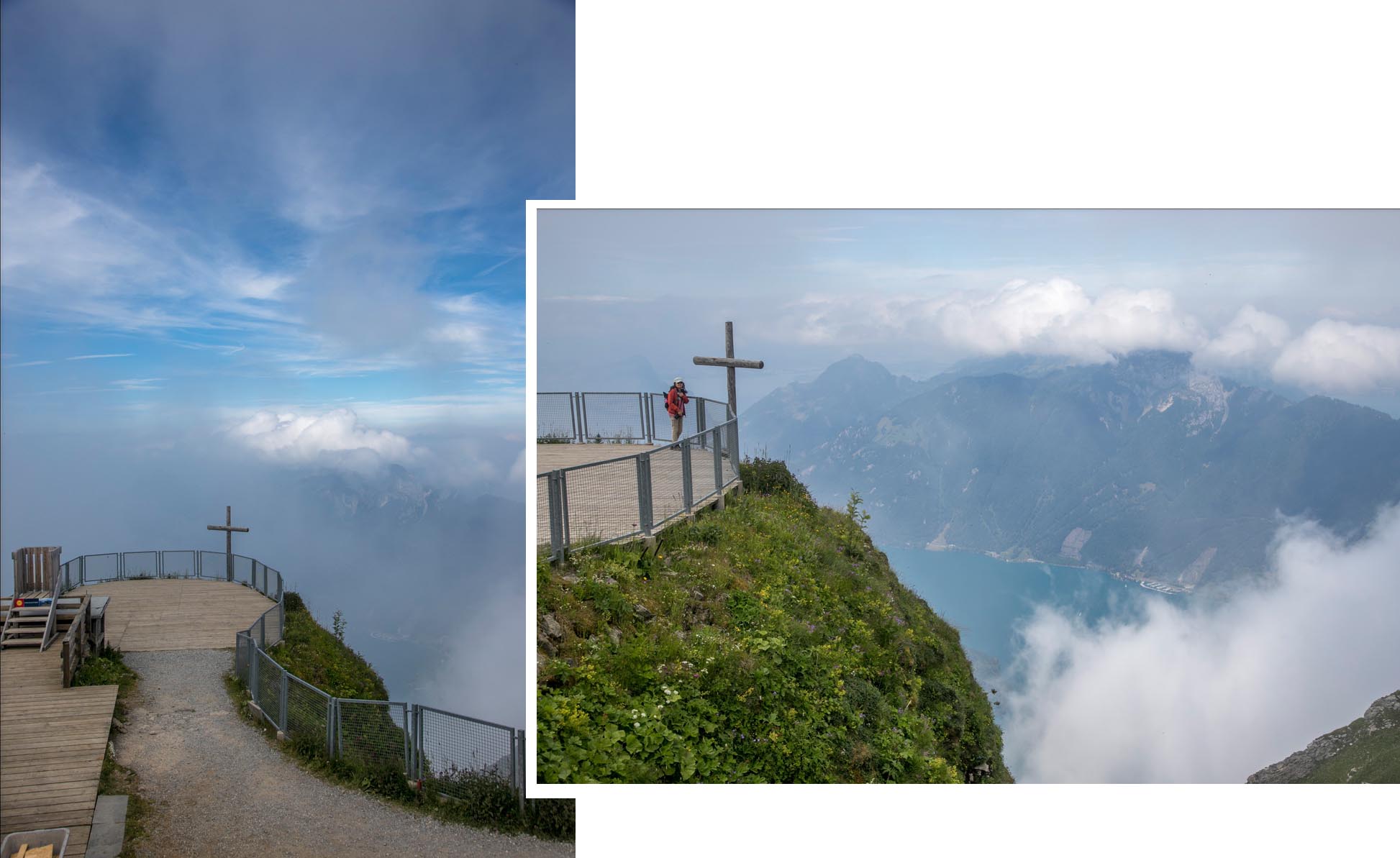 We waited for the mist to lifted but after 30 minutes we gave up and started our trekking along the Stoos Ridge Hiking Trail. We did not intended to trek to Kingenstock (4.5 km) as the chairlift at Kingenstock was not in operation and we would have to back track to Fronalpstock to get down to Stoos.

We planned to trek for a while to see if we could find a place with a less misty view of the lake. The trek started on a rather flat ground and soon it went up and down. At some points the view of the lake was very captivating. It felt amazing standing on “top of the world” staring down at the lake below.

Looking at the trek ahead we could see it meandering on the ridge all the way to another summit and that must be Kingenstock. At some sections of the ridge the sides were gentle slopes at other sections the sides were steep drop. 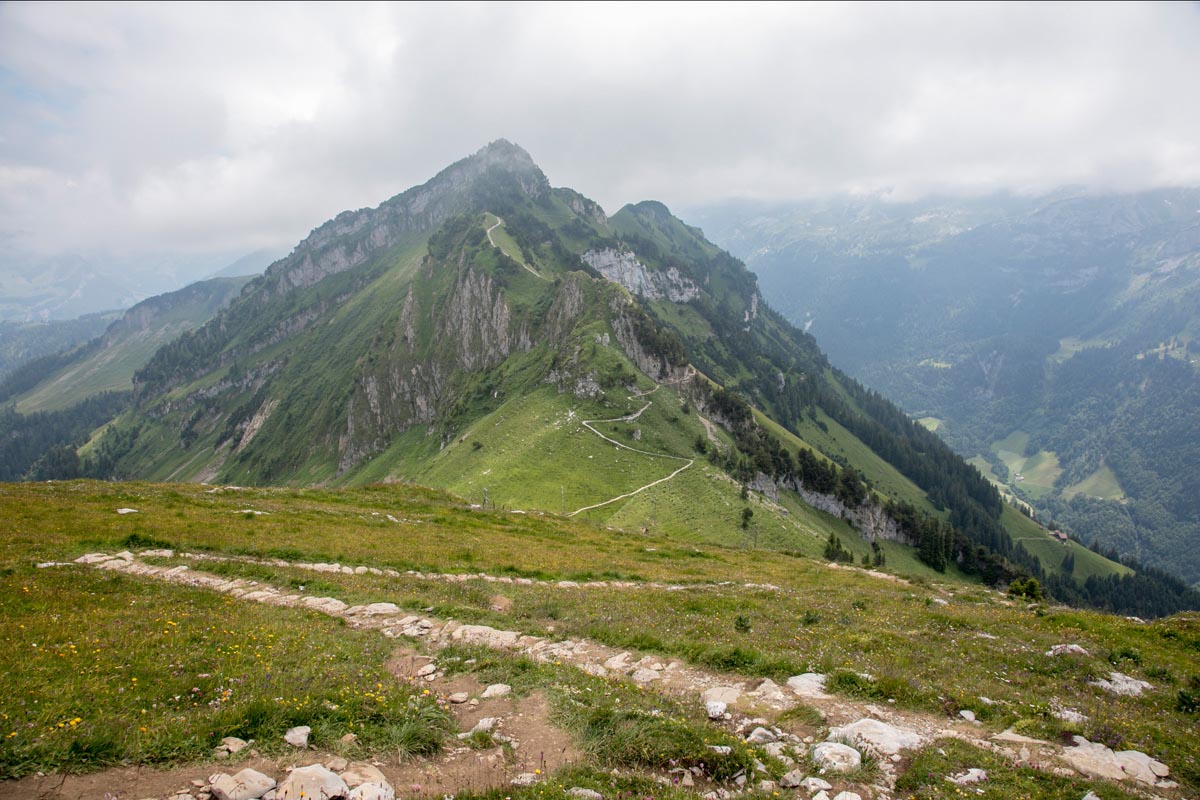 After an hour of exploration we walked back to Fronalpstock and stopped at a large alp restaurant just beside the chairlift station for our coffee break. Though it was still misty we chose to sit at its outdoor deck. We ordered two cups of capuccino and a cake and the cost came up to CHF16.80, rather pricely. 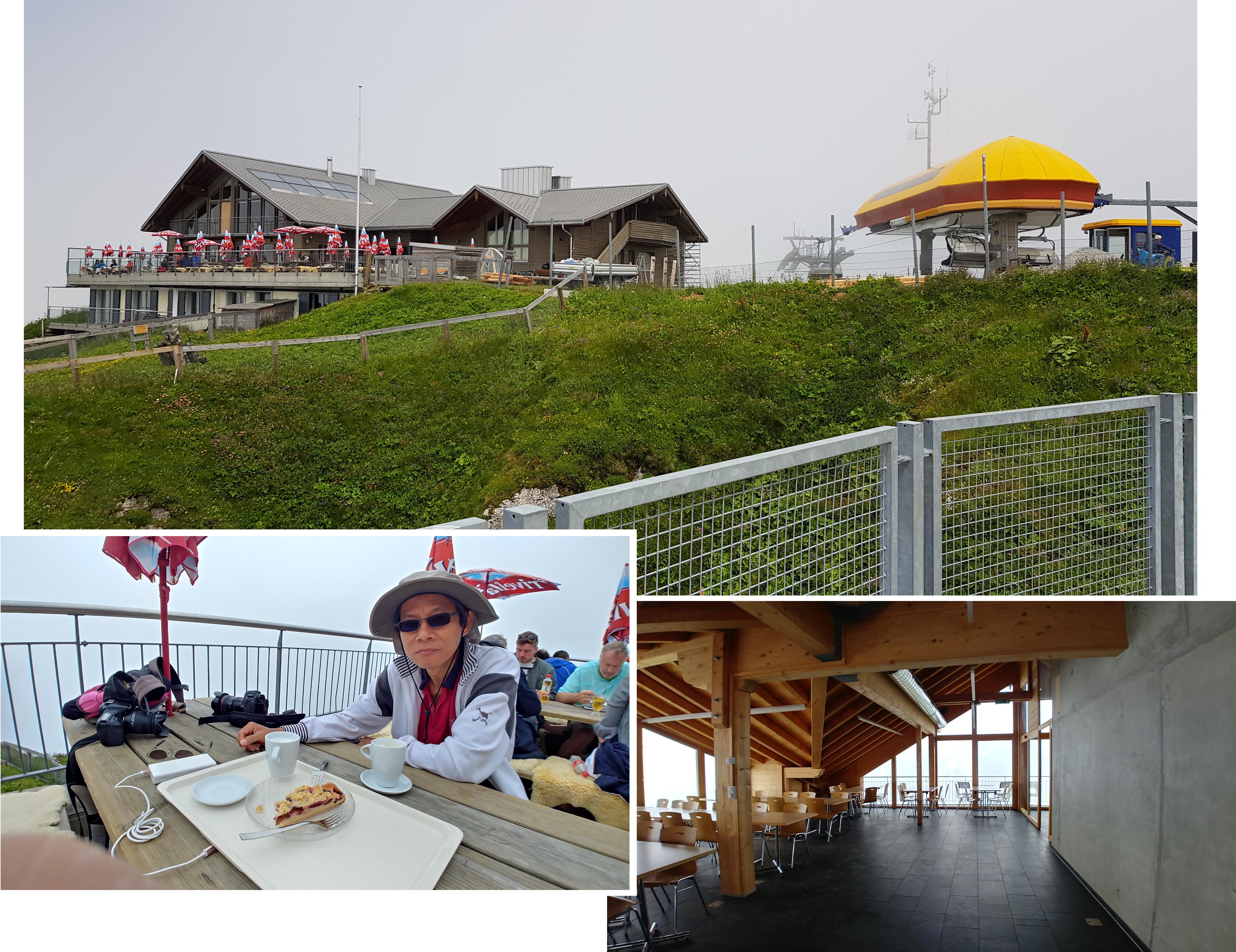 Our coffee break at Fronalpstock

After a nice coffee break, it was time to leave. We were back to the chairlift that took us down to Stoos before getting on to the funicular back to Stoosbahn. We made our carpark payment at the same funicular ticketing office and the cost was CHF5. 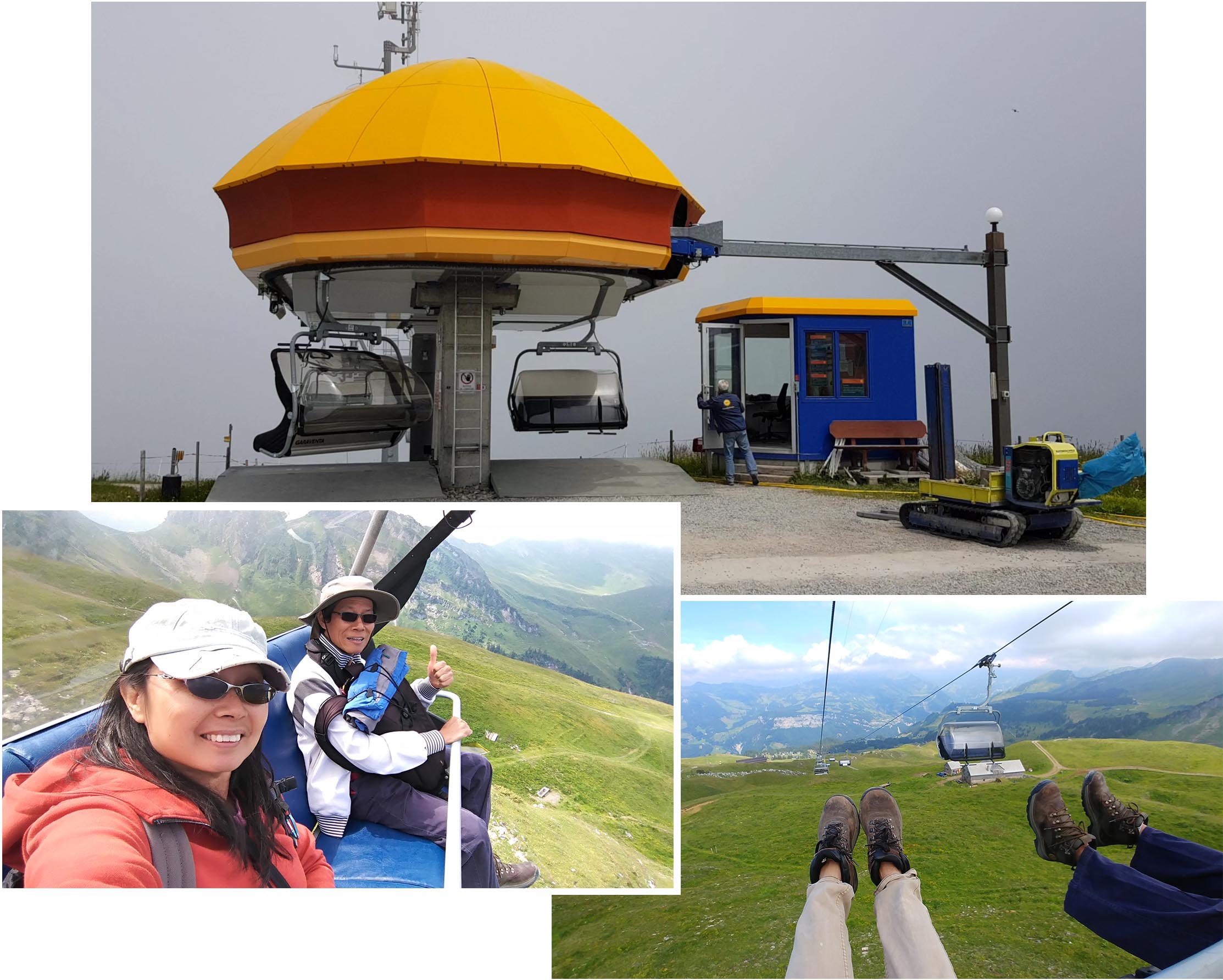 Going down to Stoos

On our way to Interlaken we travelled past several lakes there was Lake Lucerne, the one that we saw from Mount Rigi the day before  and from Stoos Ridge this day. Switzerland was a country full lakes!  Mid way into our drive (about an hour and 15 minutes) we came upon a viewing point.

Route from Stoosbahn to Interlaken

There was a road side set-in that had a fantastic view of Lungern town and Lungern Lake. The view was gorgeous. We stopped for a long while standing under the hot sunlight enjoying the view. The co-ordinates of this viewpoint, Viewing Point Schoenbuehel, were 46.775663, 8.143181. 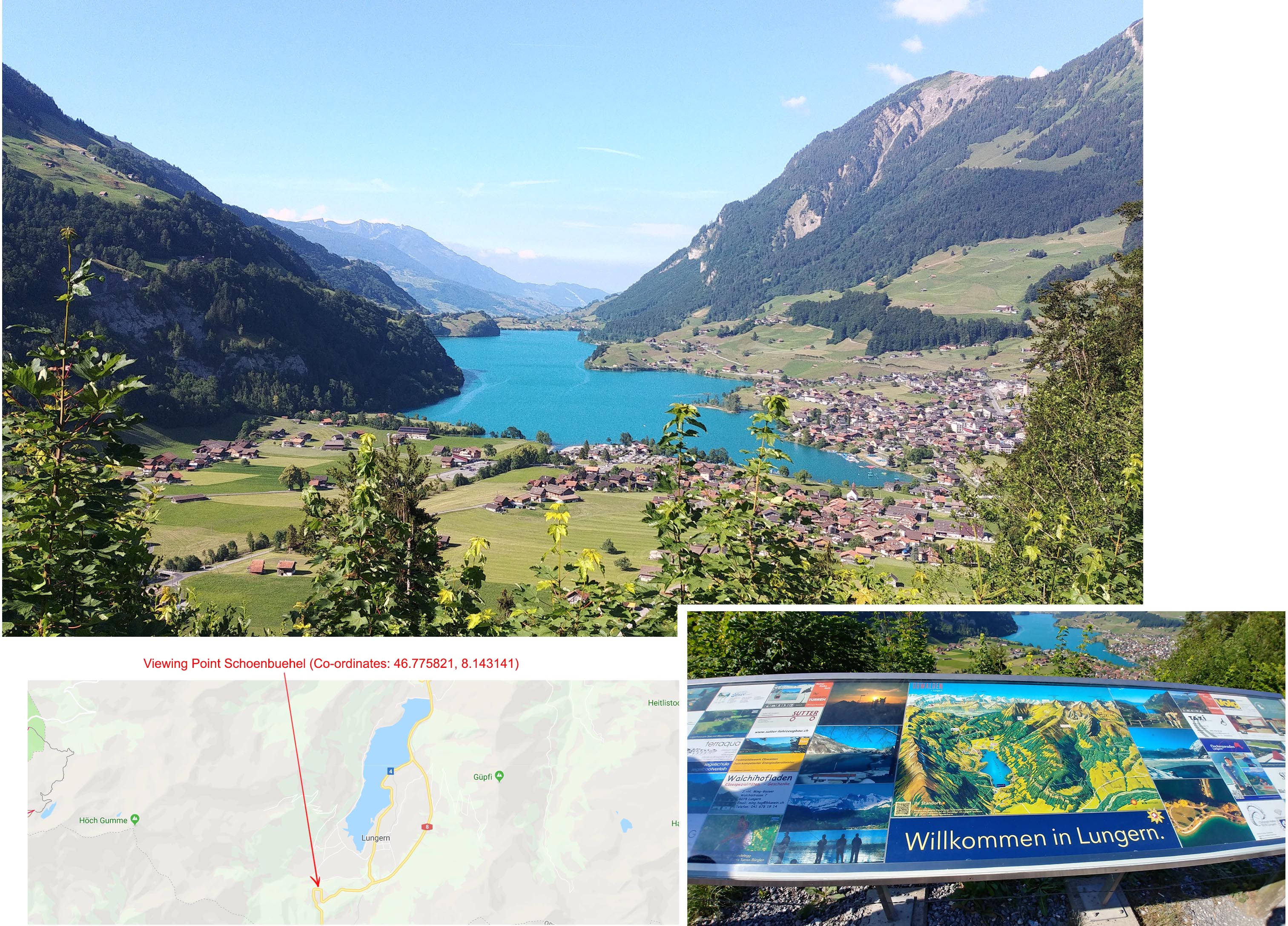 Harder Klum was located at Interlaken. We timed our visit to near sun set timing so our target was to go up to Harder Klum at about 8 pm. At the lower furnicular station there was no parking so we drove around and found parking across the river. It was free parking after 6 pm.

After parking we walked across the bridge/road that spanned river Aare. At the funicular station the ticketing staff told us that the frequency of the ride was 30 minutes interval and the last car would leave the top station at about 9.40 pm. After that it would be trekking on foot down the hill for those that missed the last ride. 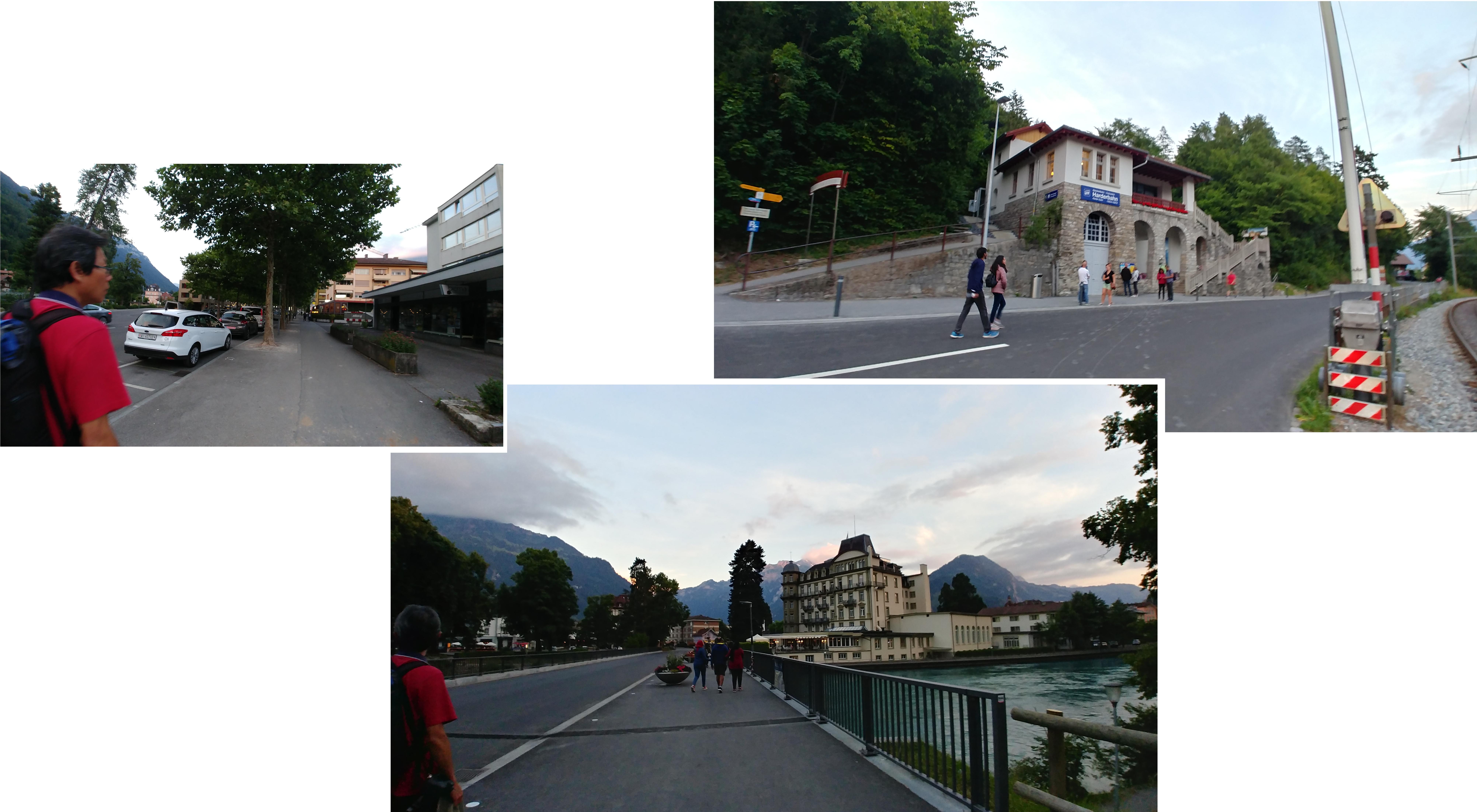 Parked our car before crossing the river to Harder Kulm station

The funicular car took about eight minutes to ascend 755 meters. It was a two tracks system and from the base of the hill we could see the steep tracks rising practically vertically up the hill into a tunnel. It would be too high to track down so we must not miss the last train down. Looking at the funicular car, it did not look very big which meant that it would be very packed when everybody tried to squeeze in on the last ride down. Okay we would take the second last ride down! 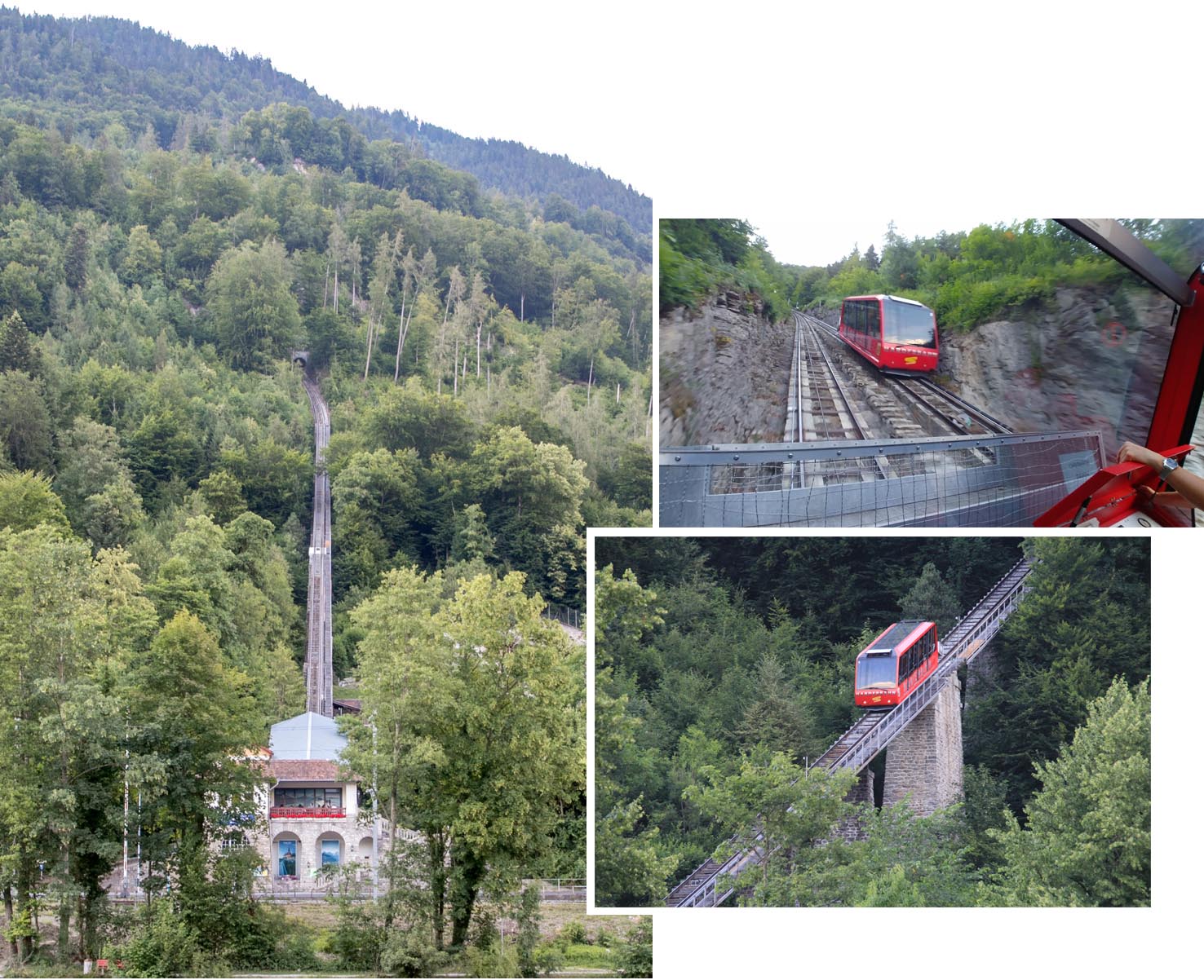 Though this funicular was not as futuristic as the one we sat at Stoosbahn, it also had plentiful of glass panels. The sides and roof of the car was transparent and as we ascended the hill we could look out and see the beautiful scenery. 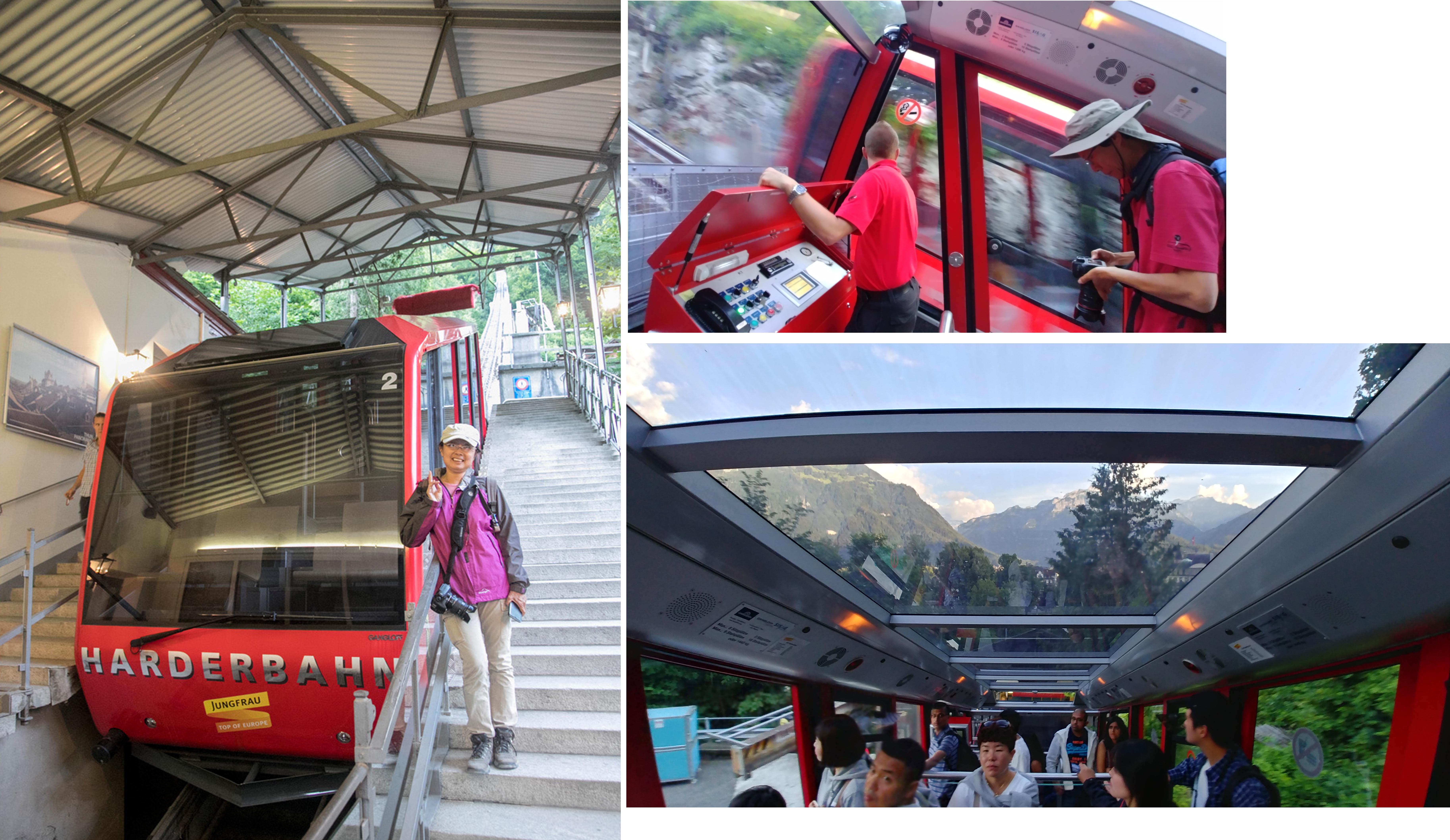 The half fare price of a return ticket per person was CHF19, and as usual we had to show our Swiss Half Fare cards and passports to purchase the half fare tickets. 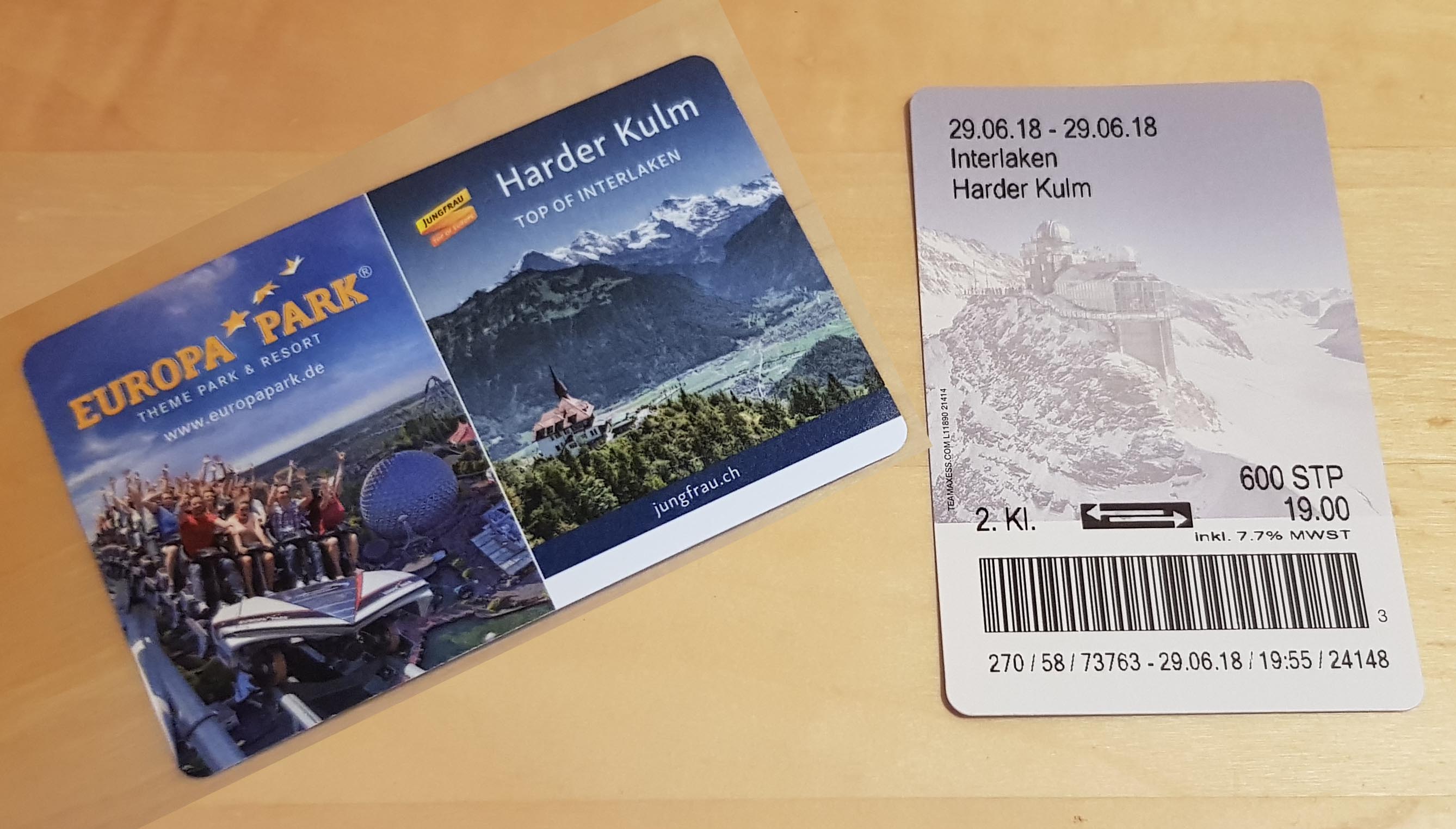 The funicular ride was over very fast and after exiting we followed a single walking trail for about 300 metres towards the viewing deck. The viewing deck was just by a restaurant and was opened to all without charge. 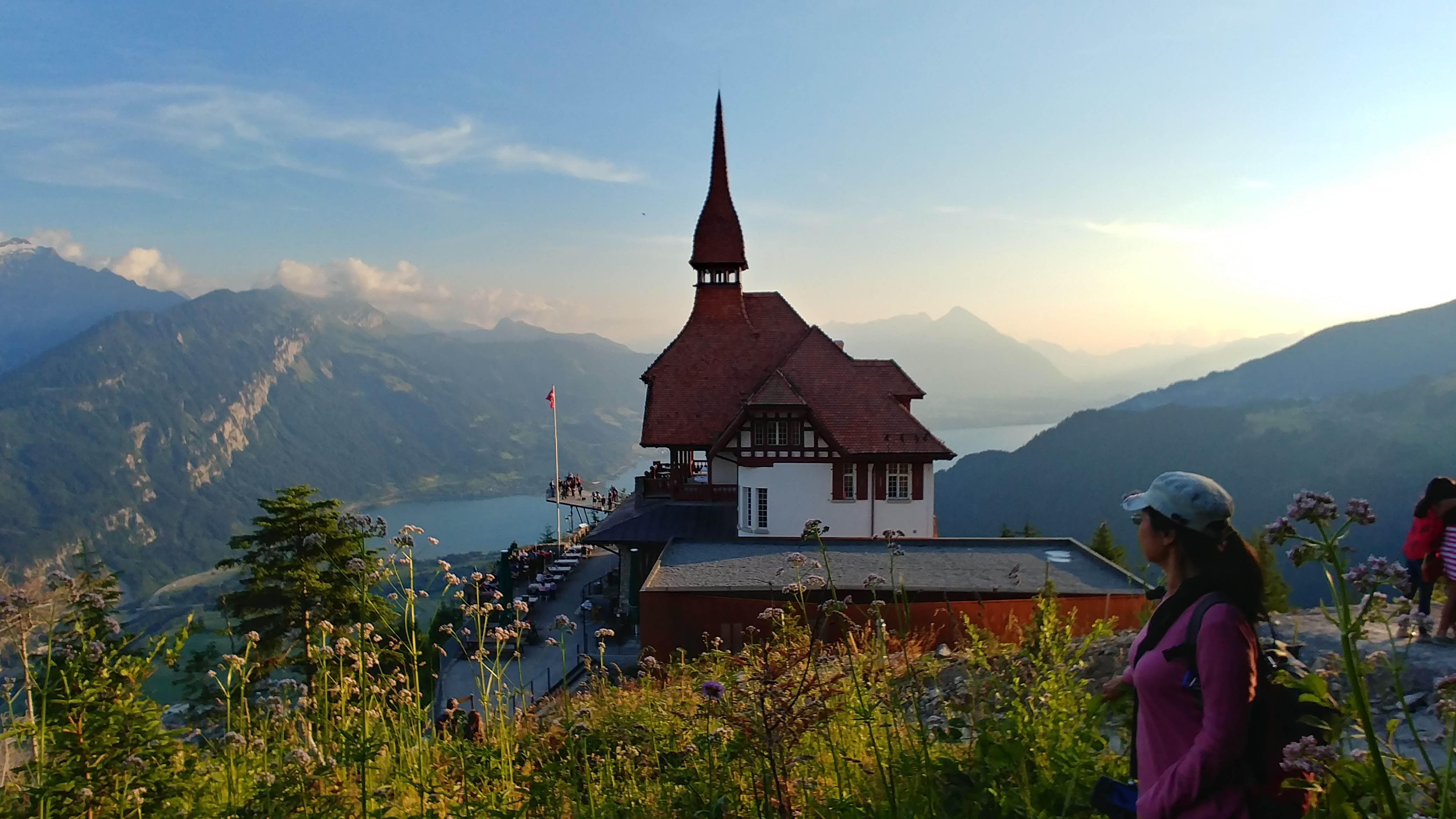 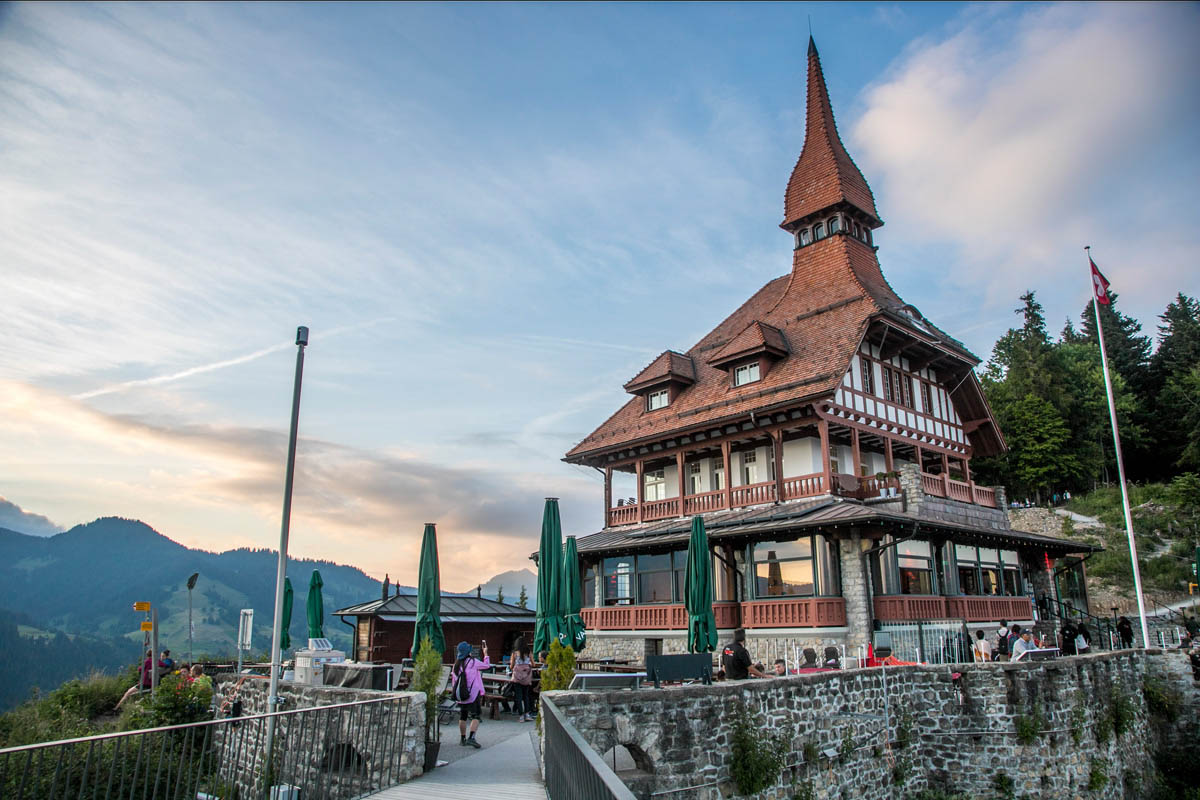 We stayed for two nights at Interlaken and our stay had a full kitchen. Before we checked into our stay we visited a supermarket just a street away and picked up grocery for two days. Switzerland was a very costly country, grocery was expensive and dining out was even more expensive. Cooking our own meals definitely helped to cut down the expenses.

We had booked two nights at “Hidden Gem – Interlaken” a listing on Airbnb (click “Gift Voucher” to received a cash voucher for new Airbnb signup). It was a self contain unit with cooking facilities and free parking on site and it costed CHF175 for two nights.

The main house, carpark and the airbnb unit

Our unit was spacious and cosy. The attached bathroom was clean, big with good hot shower. The cooking utensil, crockery, pots and pans were great and we were able to prepare four good meals in the unit. 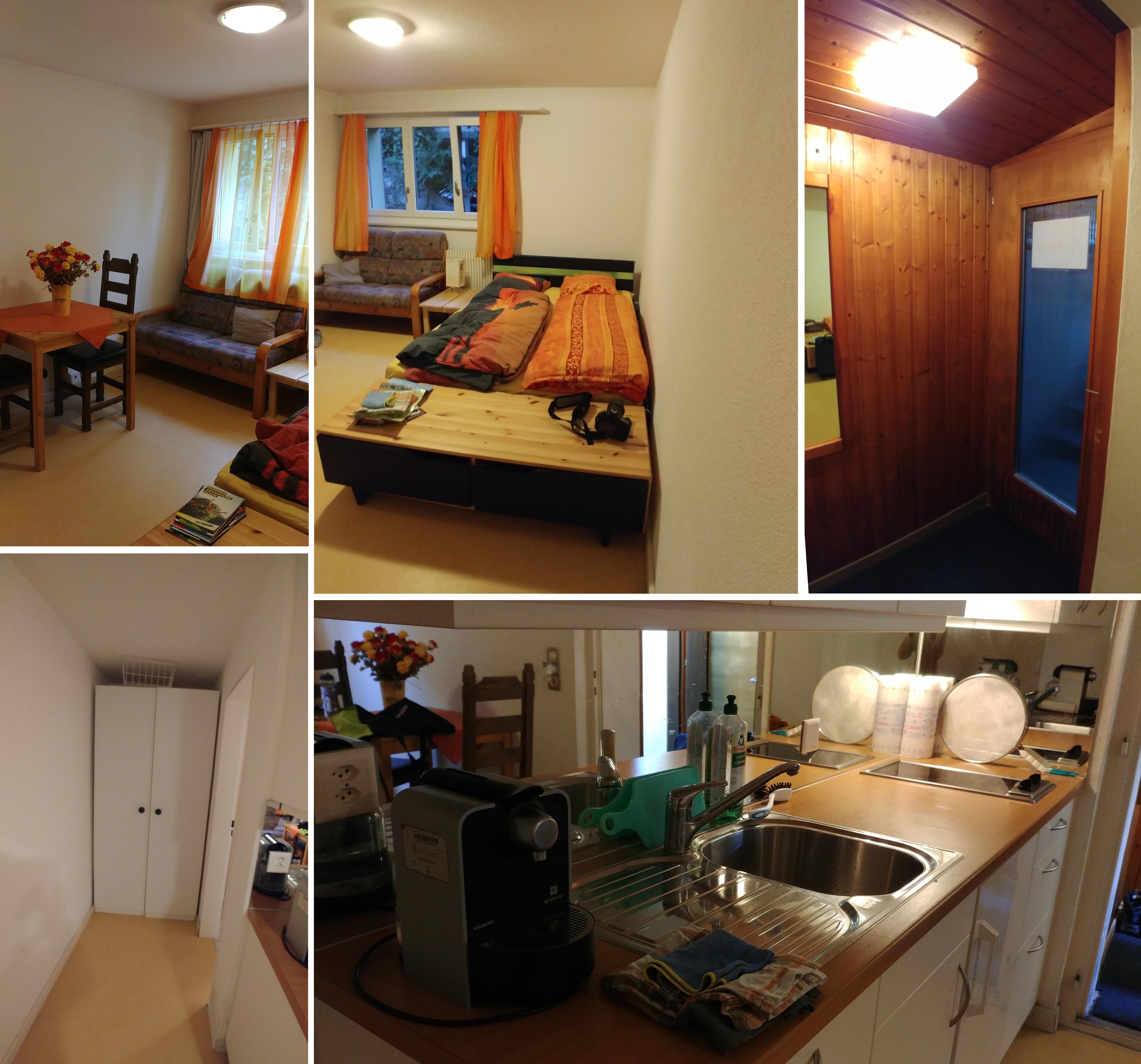 Our unit at “Hidden Gem – Interlaken”

Our host was a young man, Samuel. He, his sibling and his parents lived in the main house and Samuel managed the Airbnb unit by making sure that we settled in comfortably. 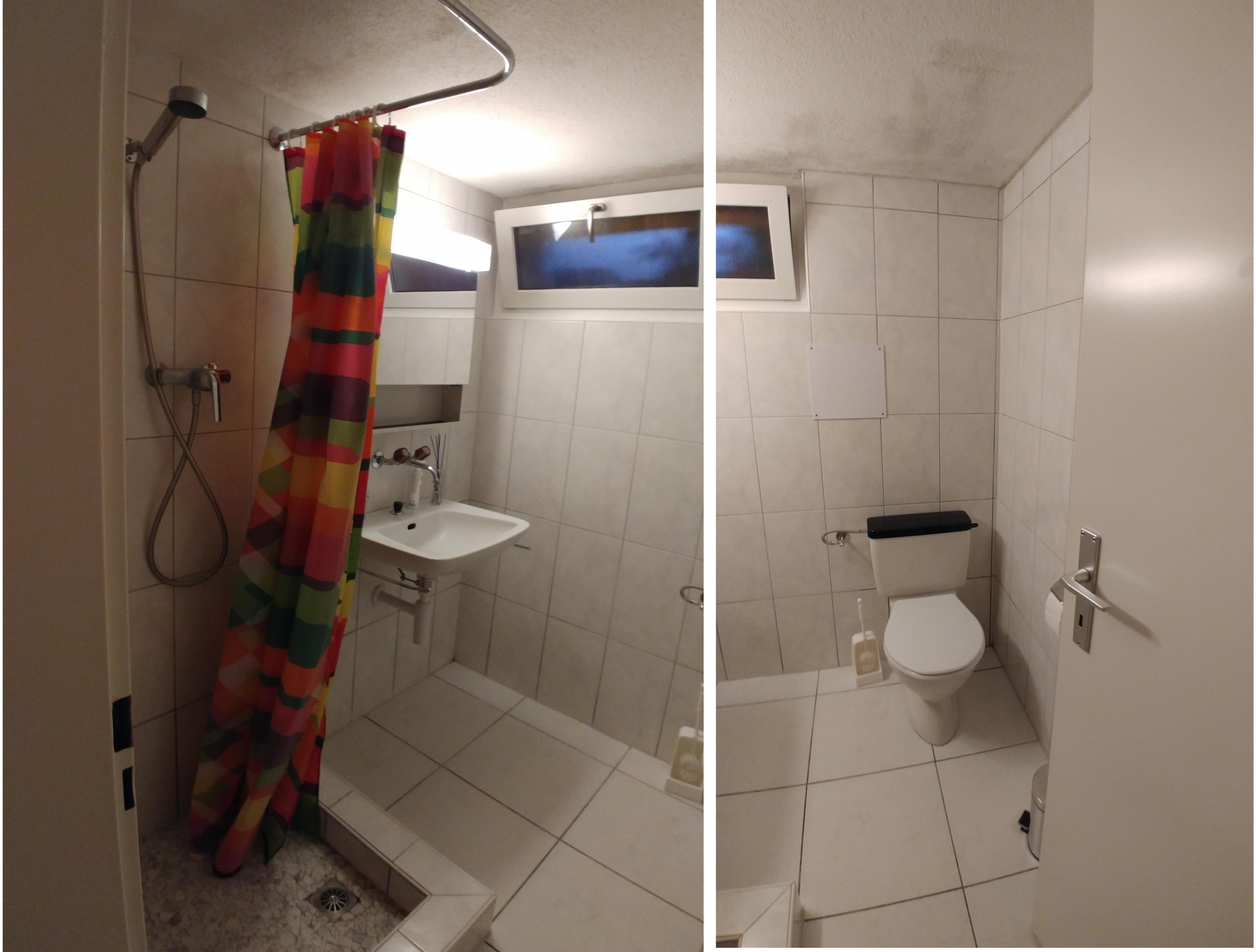