We would be visiting Mount Fanispan. The trip up would be via its funicular and cable car. We were not too sure how much time would be sufficient to explore Mount Fansipan so we decided to give ourselves the whole day.

By end of the day
Mount Fansipan was very beautiful, it would have been even more beautiful it the day was bright and shiny. The place was cloudy and misty which brought another form of beauty to the scenery of Mount Fansipan.

We reached the dining room at 7 am and the breakfast spread was already ready. There were pho, pancakes, eggs, many different fruits, salad, sausage etc etc. A good spread. I always like soupy stuff so we got the staff to prepare two bowls of hot chicken pho for us. 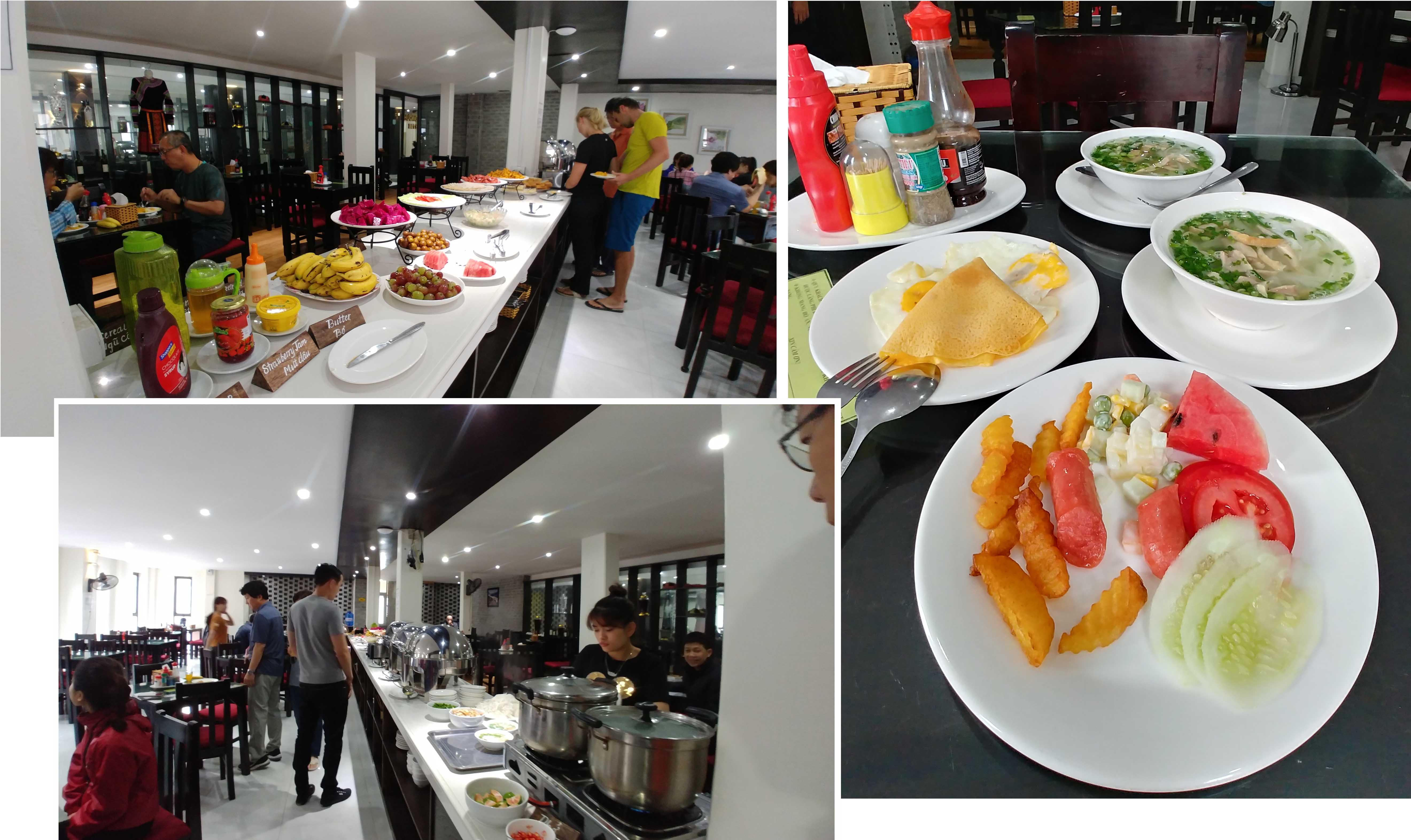 We left our hotel at about 9 am to walk to Sapa Station. It was a very short walk and in 5 minutes we reached the station.

Short walk to the Train Station

We walked up to the ticketing counter to buy the tickets. The ticketing officer could speak English so we were able to understand more about the different stages of transfer. 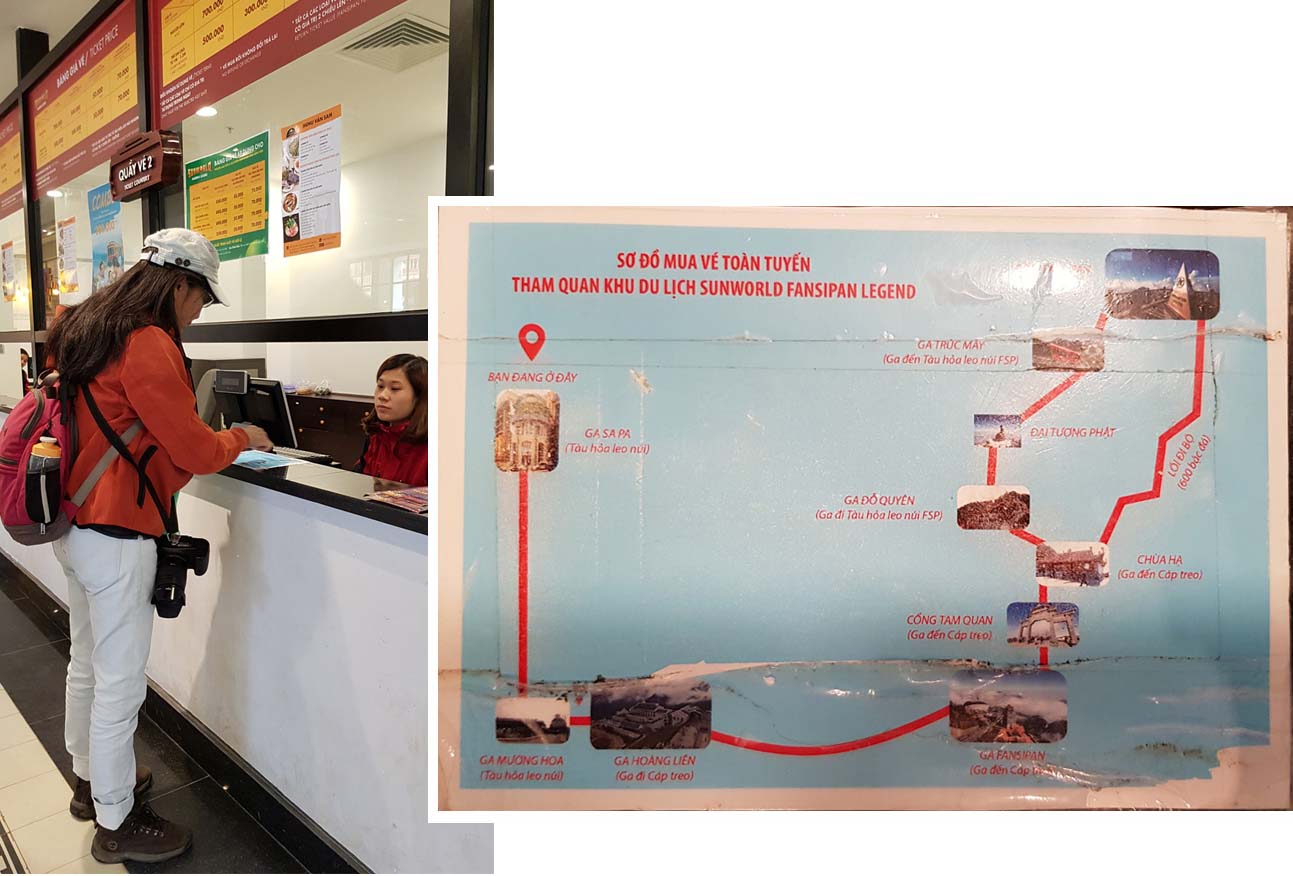 The ticketing officier explained that there were three stages of transfer to the peak. The recommended ticket  costed vnd820000 (usd 35, sgd48) per person which included return trips on the first and second stages of transfer as for the third stage it was only a one way trip up. That would bring us to Fansipan peak. At the peak we could trek down to the second stage or purchase a one way ticket down. 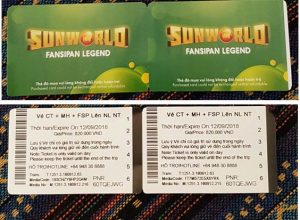 So far we found Vietnam a rather inexpensive country so we were surprise to find the tickets on the pricey side. Soon we found out that in the past it took about two to three days for visitors to trek up to Mount Fanispan. Our three stages of transfer would bring us to the peak in a matter of probably an hour.  So we supposed the ticket cost of vnd820000 per person was reasonable.

We followed the signboards going in the direction of the funicular station and this brought us further into the interior of the station. The station was pretty grand and modern. 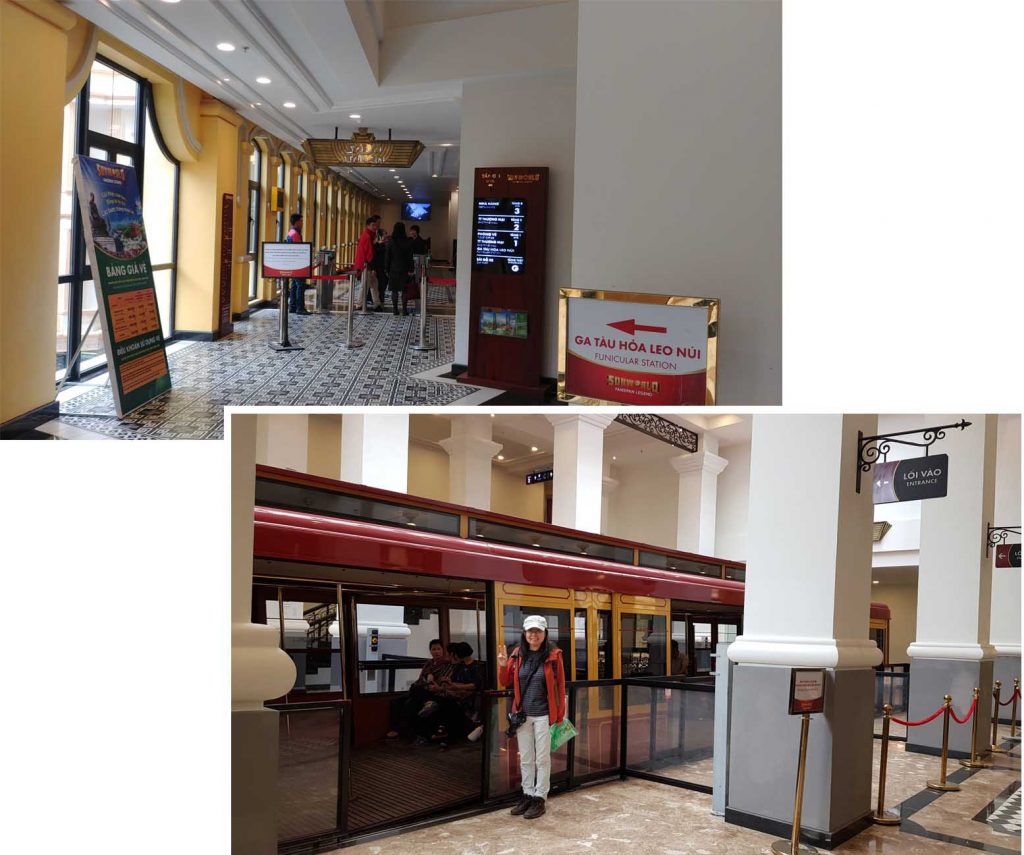 The funicular train was red and gold in color and the interior was wood paneled. It was definitely a new train with overhead gold painted bladed fans. This train ride from Sapa town to Fansipan cable car station started a few months ago (March 2018). 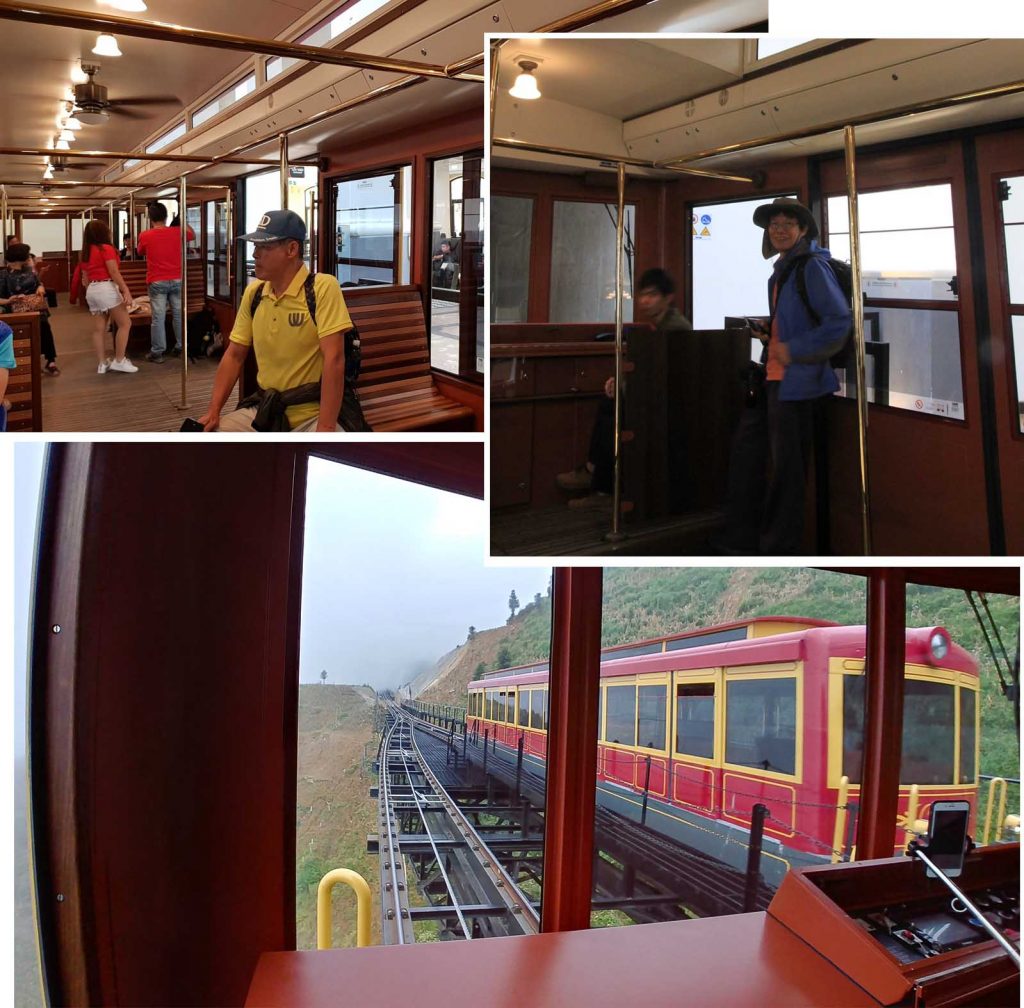 On the Funicular Train to Fanispan Cable car station

The train journey took about 10 minutes travelling a distance of 2 km. It passed through several tunnels before arriving at Muong Hoa Station. The entrance of Muong Hoa station had a grand farcade and our train pulled into the station. The train station was lovely, who would have thought that there was such structure here. 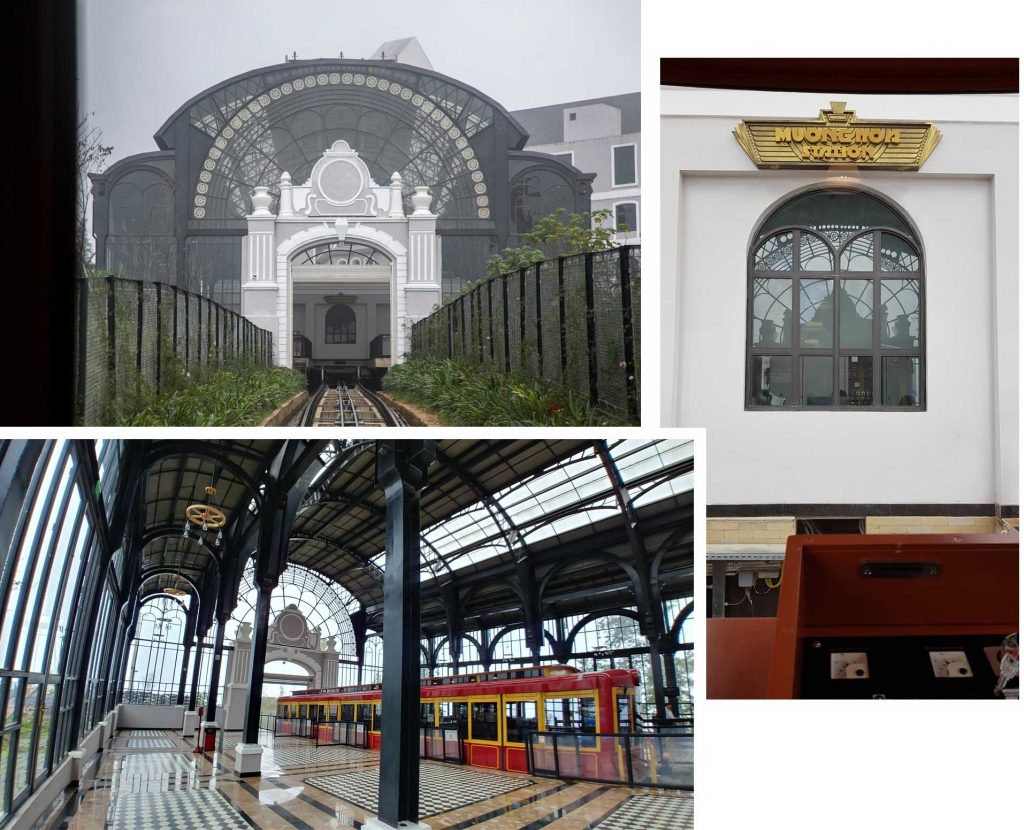 At the station the other tourists left the train and followed the signs to go through a corridor that went into the next building. They were probably heading to the next transfer station (cable car). Rather than going with the others, we went out of the station to explore. It was a beautiful landscaped garden. We were very tempted to walk up the zigzag white stairs that led up to higher ground that looked like another garden.  But after some thought we decided not to proceed as the place looked as though it was still undergoing construction besides there was also nobody but us around. 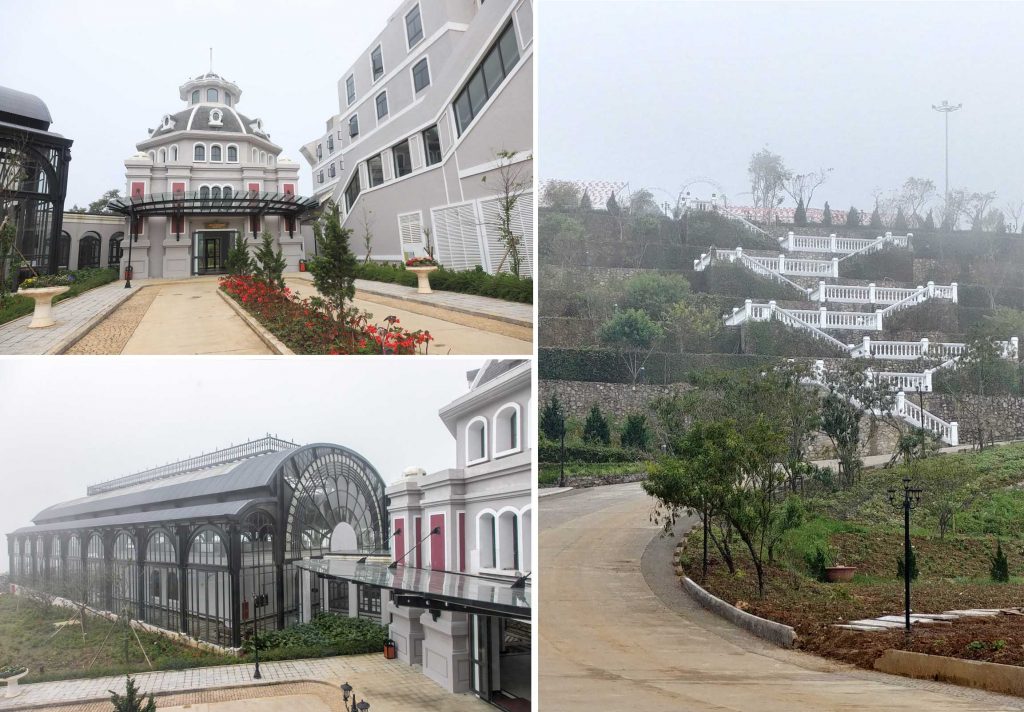 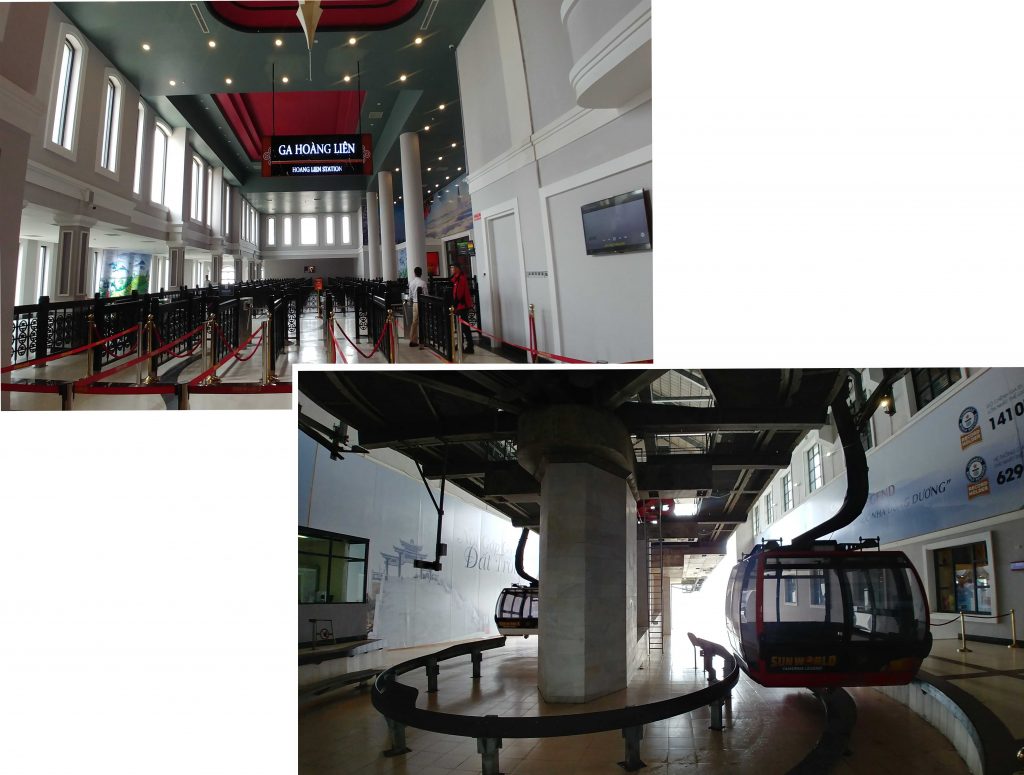 The ride was FANTASTIC. The view from the cable car suspended so high above the Muong Hoa valley was AMAZING! 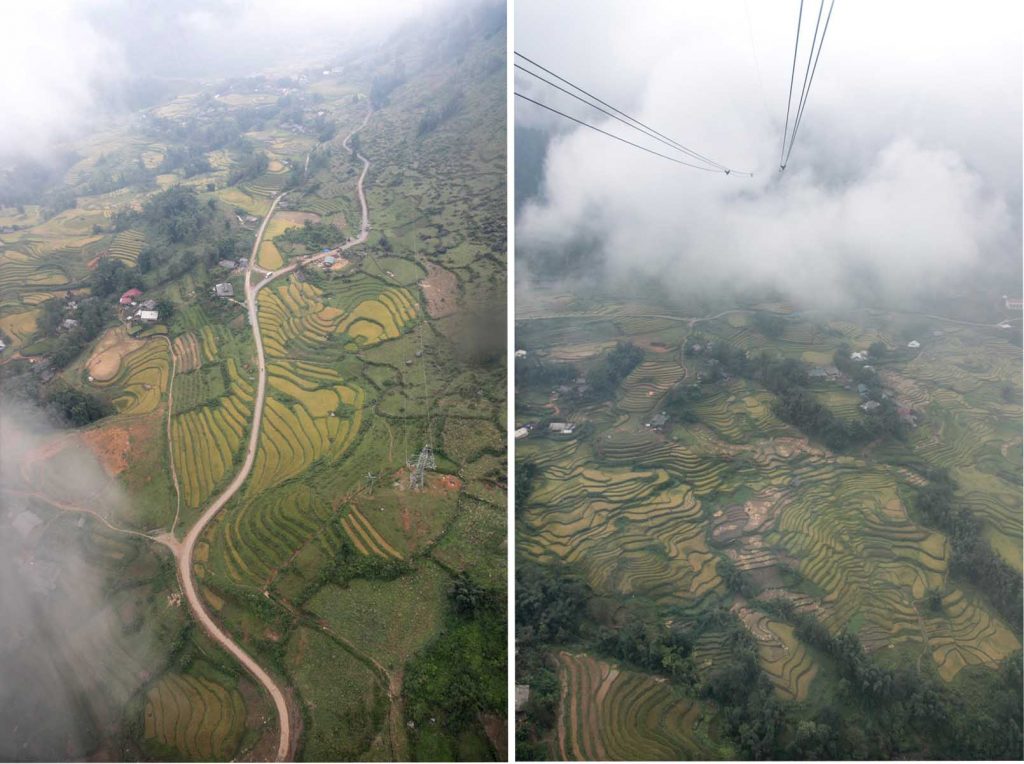 Our cable car cabin only had 5 people (including us) so it gave us plenty of space to move around. We were definitely not sitting still but moving from one window panel to another peering down at the valley below. 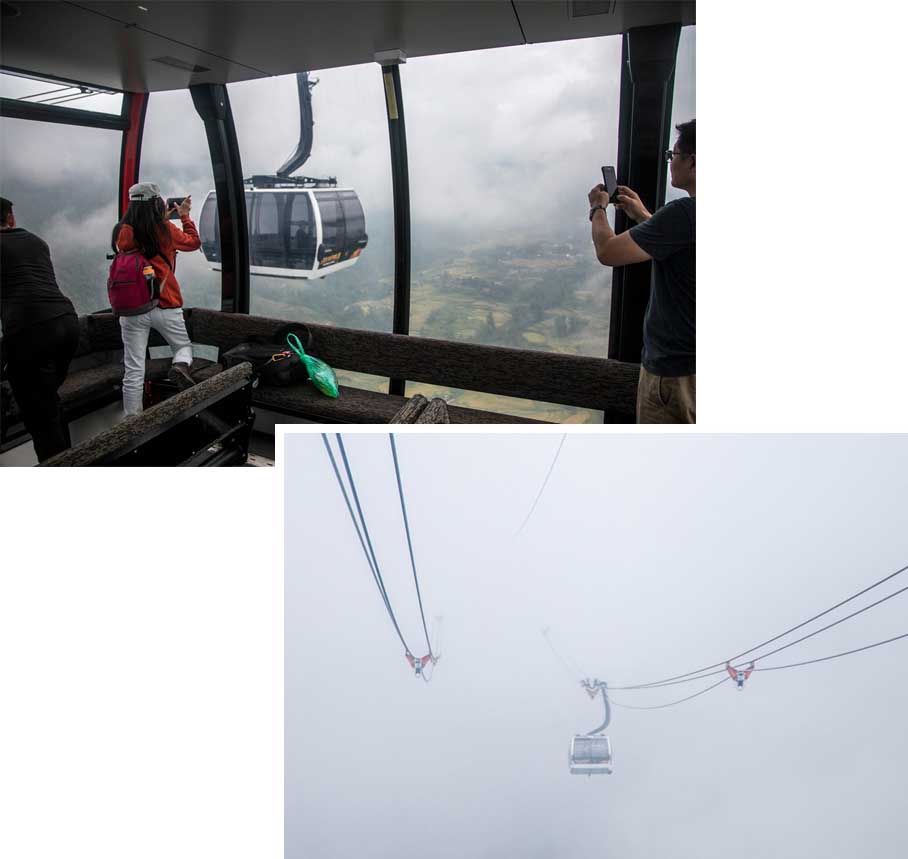 Riding the cable car up

After crossing Muong Hoa Valley the cable car went up slope crossing over the primitive forest of Hoang Lien Son mountain range. Finally we reached the upper cable car station. The mist was very heavy and everywhere we looked was very blurry. After exiting the cable car we entered into a huge building. 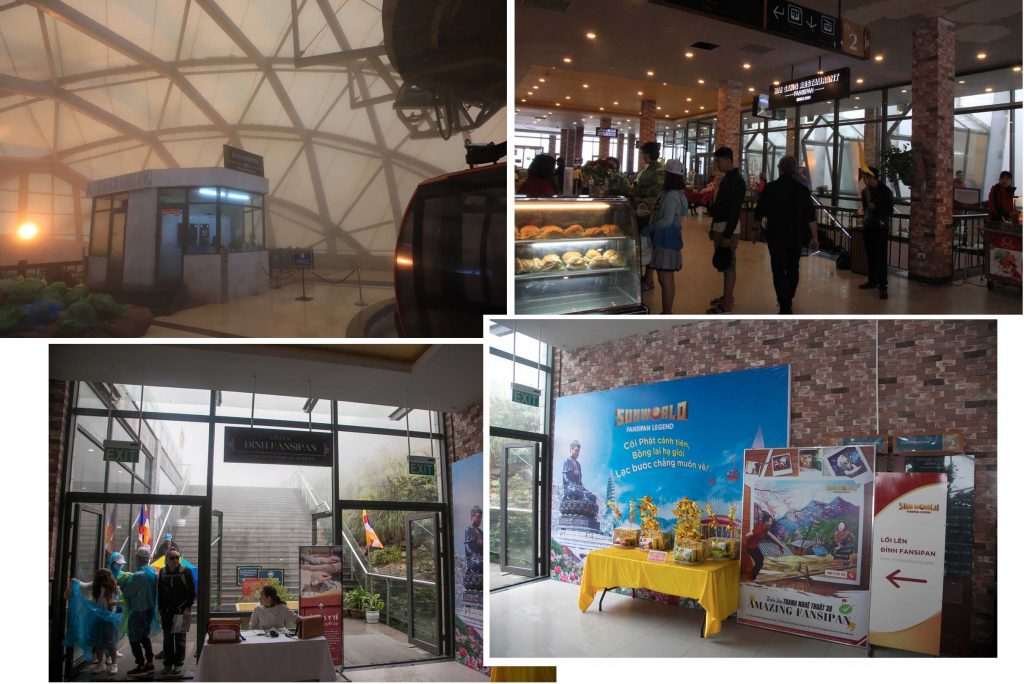 In building were cafe, restaurant, shops and rest rooms. We proceeded to a glass doors which had a sign that said “Path to Fansipan Summit”. Outside the glass doors was a flight of steps and it was raining. Since we were in no hurry we held back and went to have a coffee break at one of the cafes. Our table was just beside a glass panel window but there was no view due to the heavy mist.

Two cups of cafe latte came up to vnd130000 (usd5.60, sgd7.70). The coffee was great for a cool day like today! We sat for over an hour enjoying our cafe latte and the chips we brought with us. The mist was still not clearing up but the rain seemed to have stopped. So we packed up and left for the summit.

On the way to the next transfer (furnicular) we walked through a huge stone gate, a gigantic tower, a temple . The mist still had not lifted so we could only see the huge grey structures around us. We could not see beyond 10 meters in front on us. 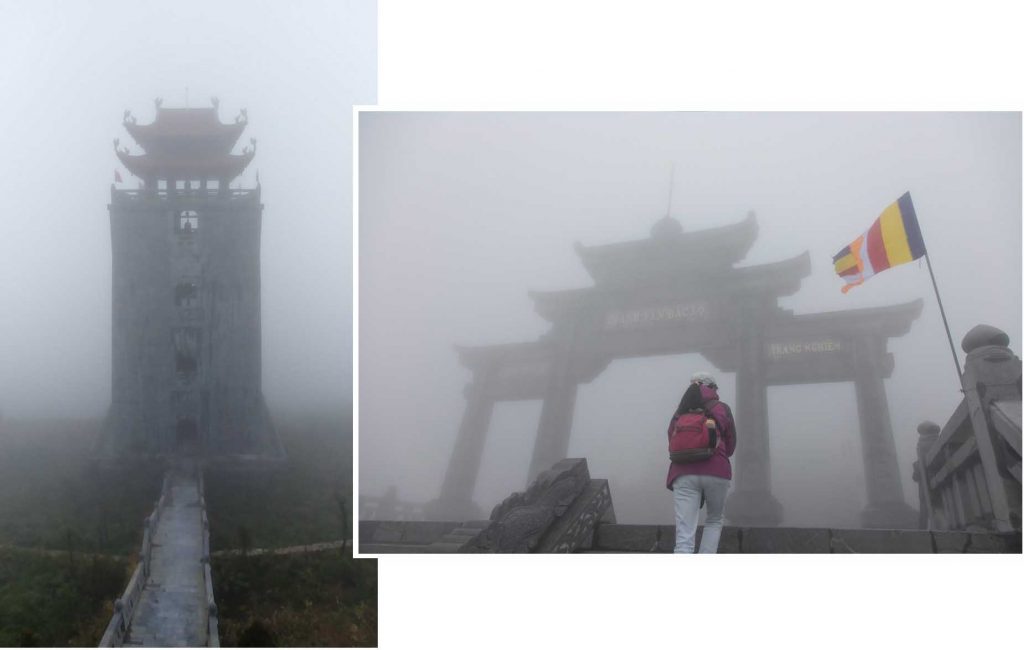 On the path to the funicular summit

Shortly we arrived at a Quyen funicular station. This train was the incline type. The ride up was very short probably only a few minutes but the climb up was pretty steep. 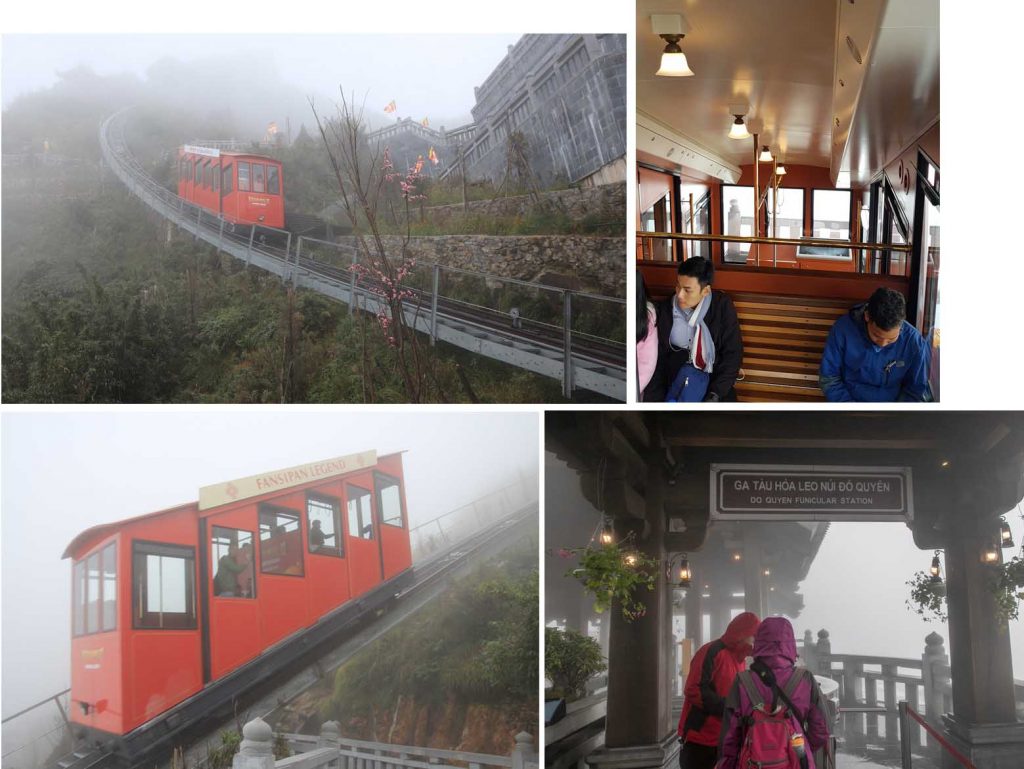 Funicular ride up to the top

After we exit the funicular train we still had to walk up several flights of stairs to the summit. There were many visitor around, some going up some already going back. The summit was crowded. 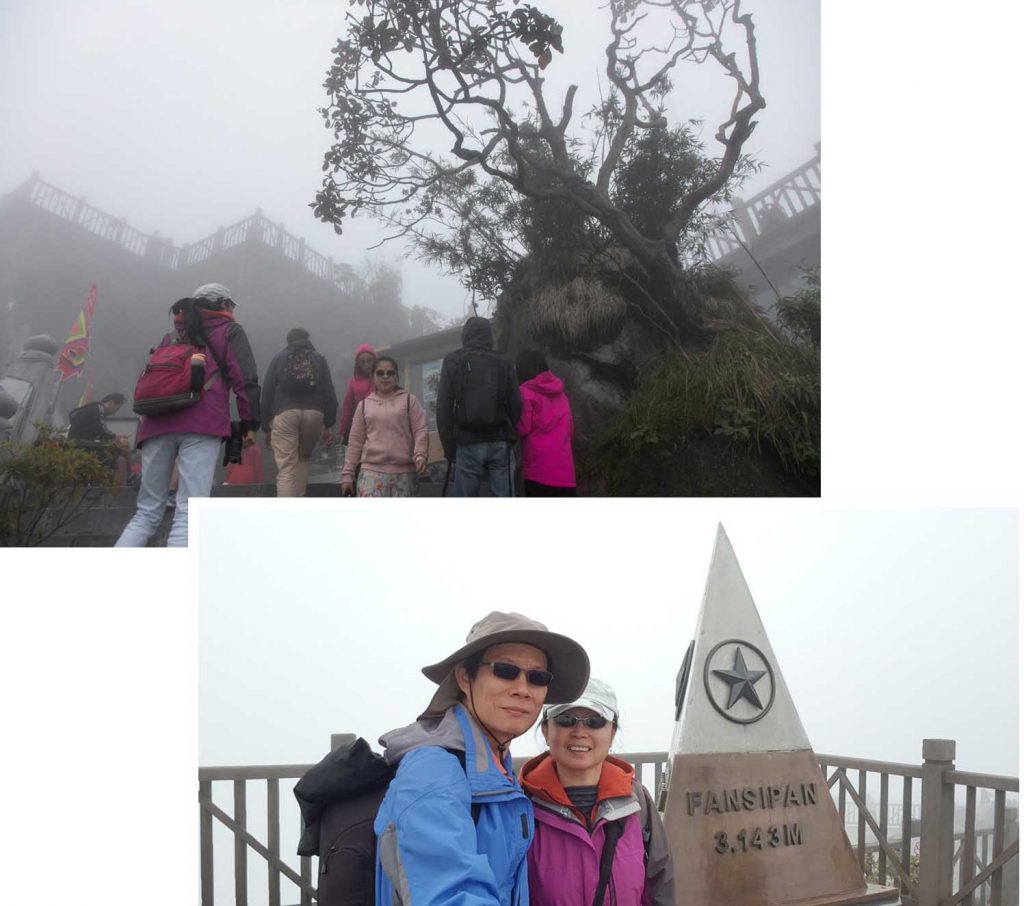 Fansipan Peak was situated on the Hoang Lien Son Range and was the highest mountain of Vietnam, Laos and Cambodia, it was also called the “Indochina Rooftop”. It was at an altitude of 3,143 m. As like all the  other visitors we took turn to take a photo at one of ther several peak markers.

Again we were not in a hurry to leave, we decided to wait at the peak and hope that the mist would clear up. Hopefully we would be rewarded with a fantastic panoramic view of Fansipan peak. 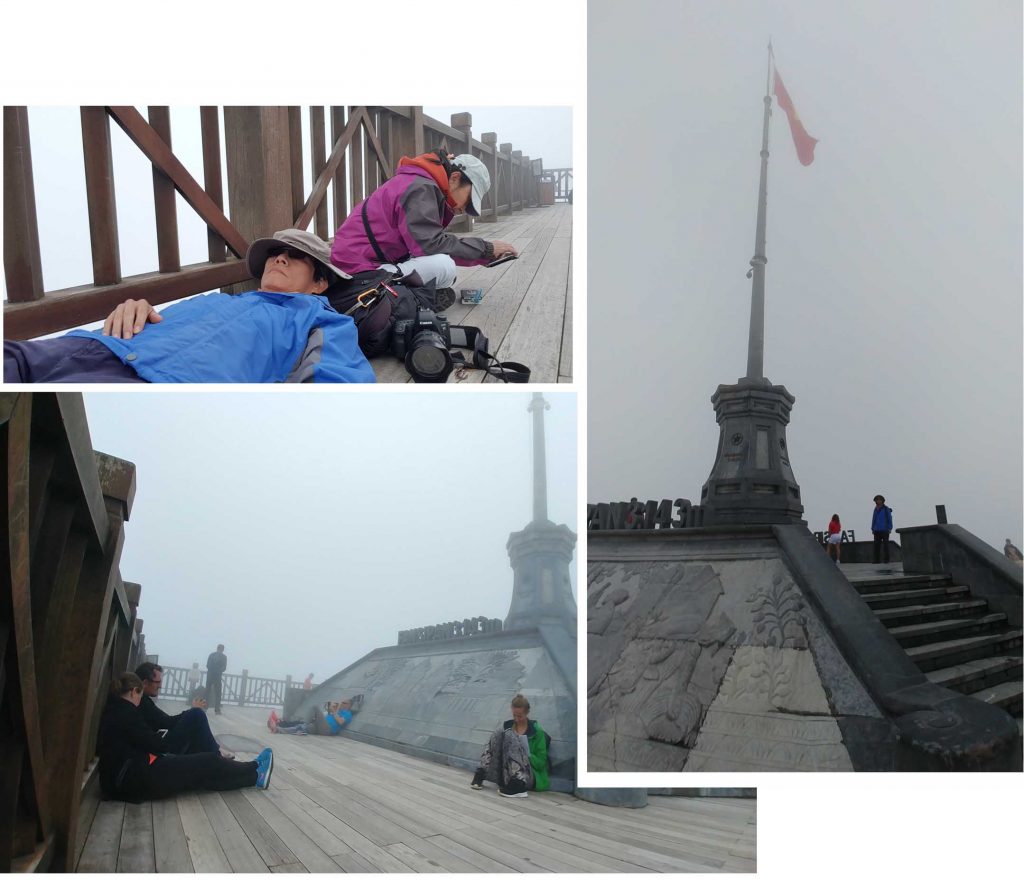 We waited for an hour and resigned to the fact that there would be no “clear” day today. No point waiting around so we started our trip down. We walked down to the funicular station but decided not to travel down by the funicular train. We took the stairs by the side of the station. Mid way to the lower funicular station we we saw a huge sitting Buddha statue. 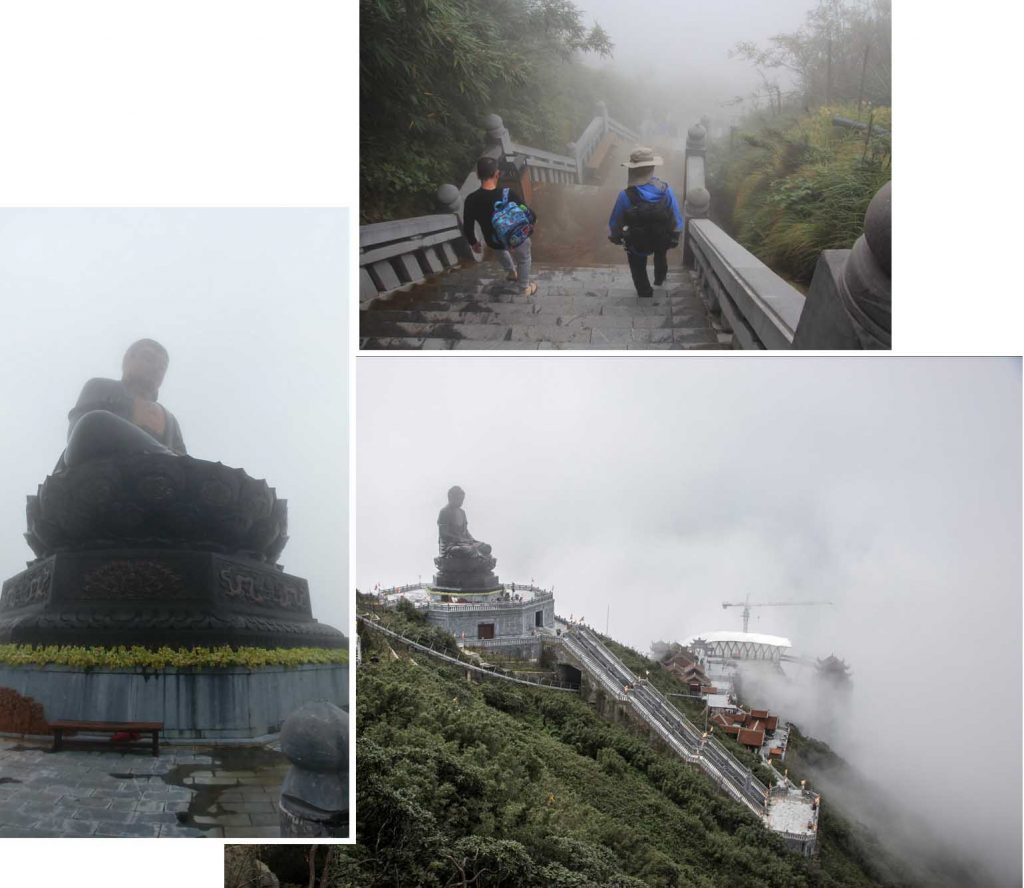 Earlier on the way up on the incline funicular train we did not see the huge Buddha statue as it was shrouded by the dense mist. It was a good thing that we walked down or we would surely miss the statue again. This statue was largest Amitabha Buddha statue in Vietnam.

From the big buddha we took a path that did not go down but went sideway that should bring us to a huge statue of the Goddess of Mercy. Along the path we encountered many monk statutes. 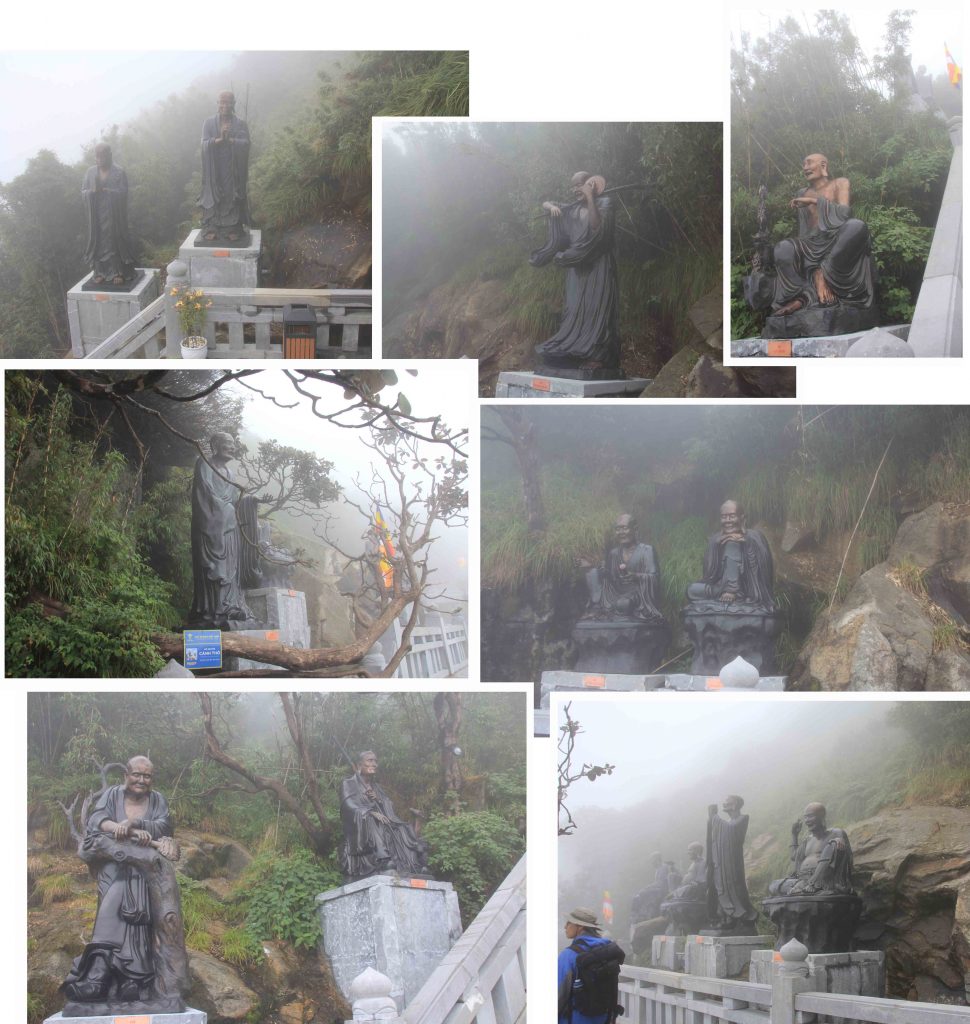 We walked past a Chinese pavillion and went up some steps and a short while later we saw the Goddess of Mercy standing on a peak looking far ahead. 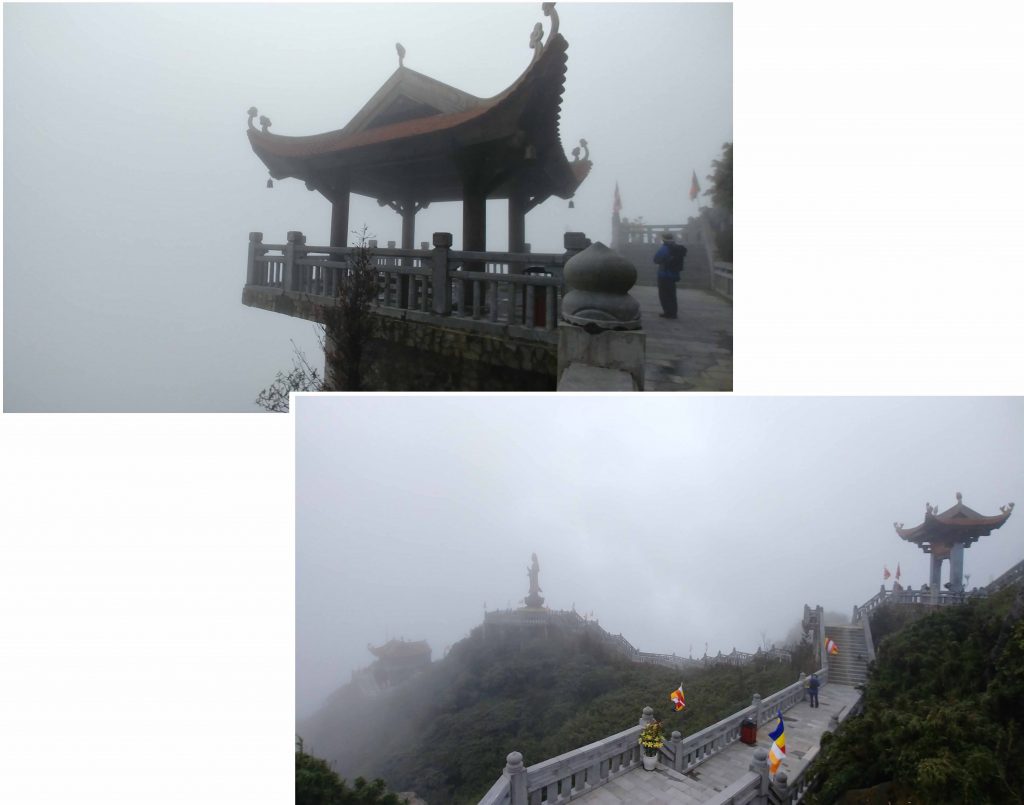 Goddess of Mercy standing on a peak

The steps came to a branch. One path led directly to the Goddess of Mercy while the opposite path led to a multi-layer roof pagoda. 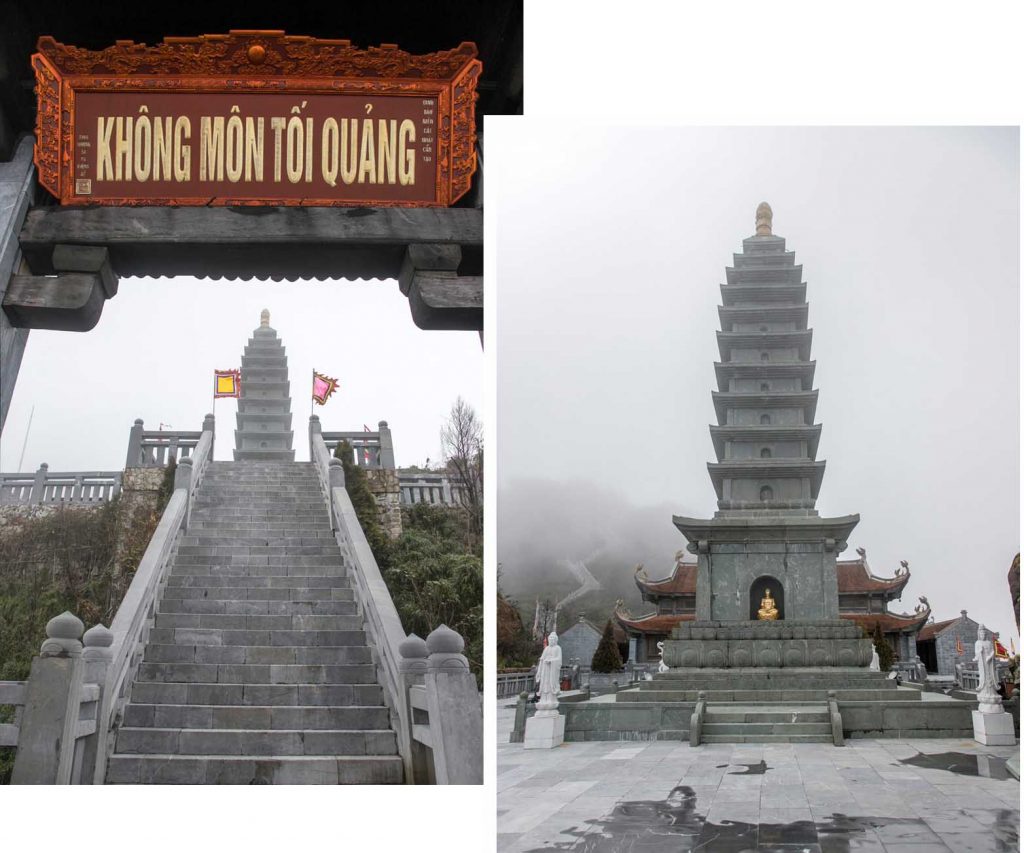 We waited for a while and occassionally when the heavy mist lifted we were rewarded with a gorgeous view of the Goddess of Mercy and its surrounding. The view was fantastic and how we wished the mist would stay away longer. But as soon as the view was cleared of mist another layer of mist blew in. 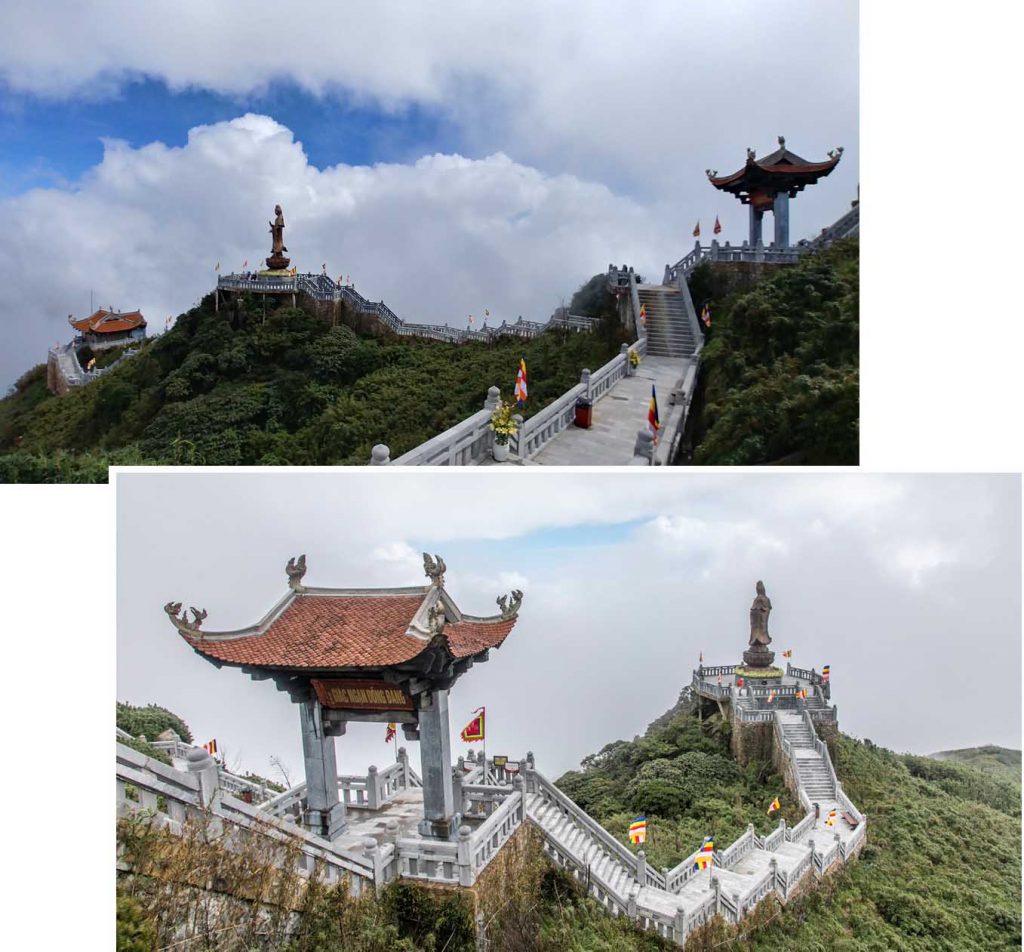 Goddess of Mercy at Fanispan

At about 3 pm we left the Goddess of Mercy and returned to the huge Buddha Statue. From the statue we walked down a long flight of steps to the upper cable car station. There we started our journey back to Sapa Town via the cable car then the funicular train. 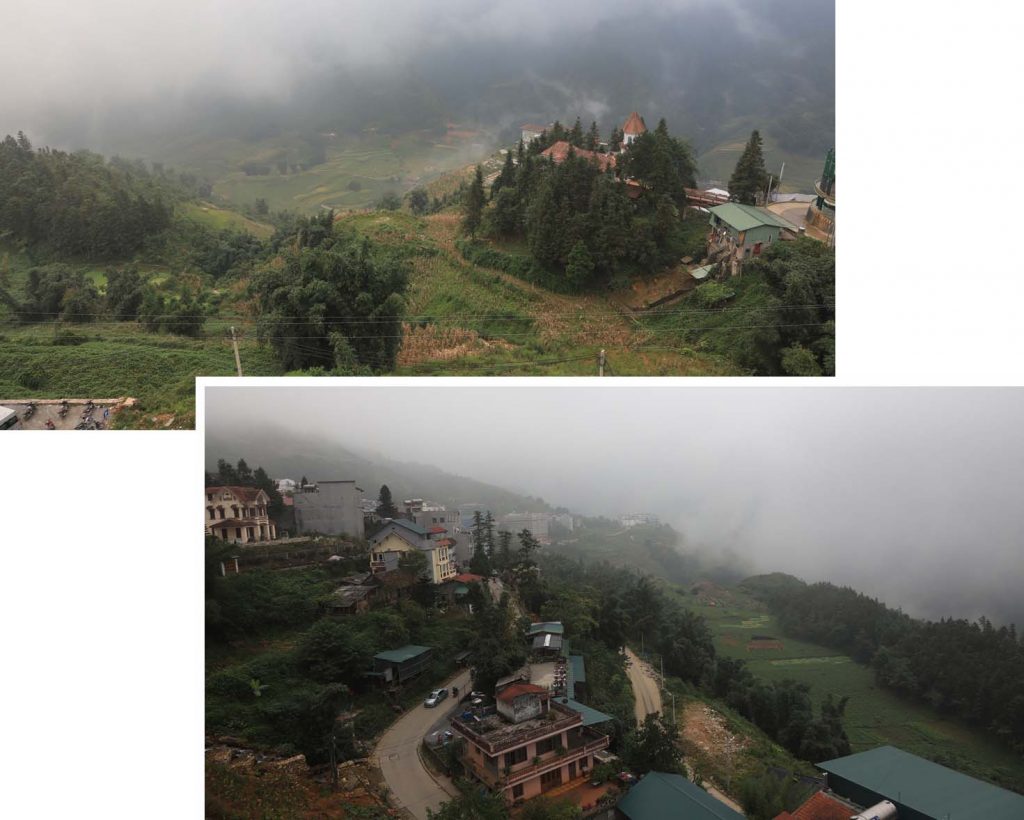 View of Sapa Town from the funicular train

We started our trip to Mount Fanispan from the Sapa Station at about 9 am and by the time we were back to the same station it was already 4.30 pm. Though the mist was dense  on Mount Fansipan, though we were unable to see the “fantastic” panoromic scenery of Mount Fanispan, we felt that the visit was still worth the effort and cost.

Across the road of our hotel, a couple of units away was a local restaurant that served Vietnamese food, this was stated on the signboard of the shop. We went in and ordered a fried noodle dish and another fried rice dish. We had a huge dinner the day before so today we wanted something simple. The noodle and rice dish was okay but we wished that there were more meat in them. The two dishes came up to vnd100000 (usd4.30, sgd6.0) 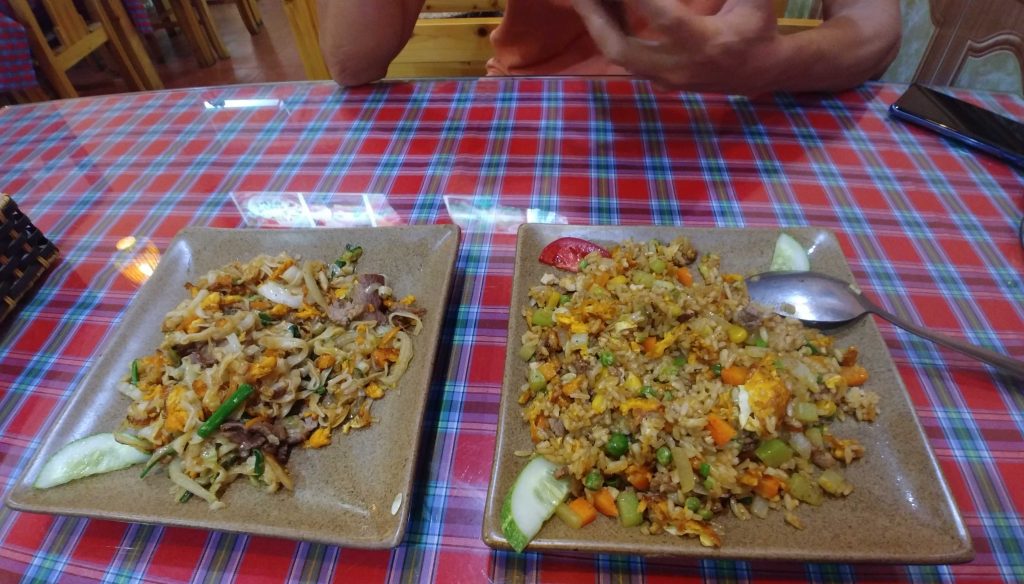 After dinner we strolled into town for dessert. Our first cafe destination was Cafe Emotion, a lovely cafe near Sapa park. The one we saw the day before where all its three levels of balcony were hung full of potted plants/flowers. Unfortunately when we arrived there was no table vacancy so we went down the stretch of houses, about two/three units to another cafe called “The Gecko”. 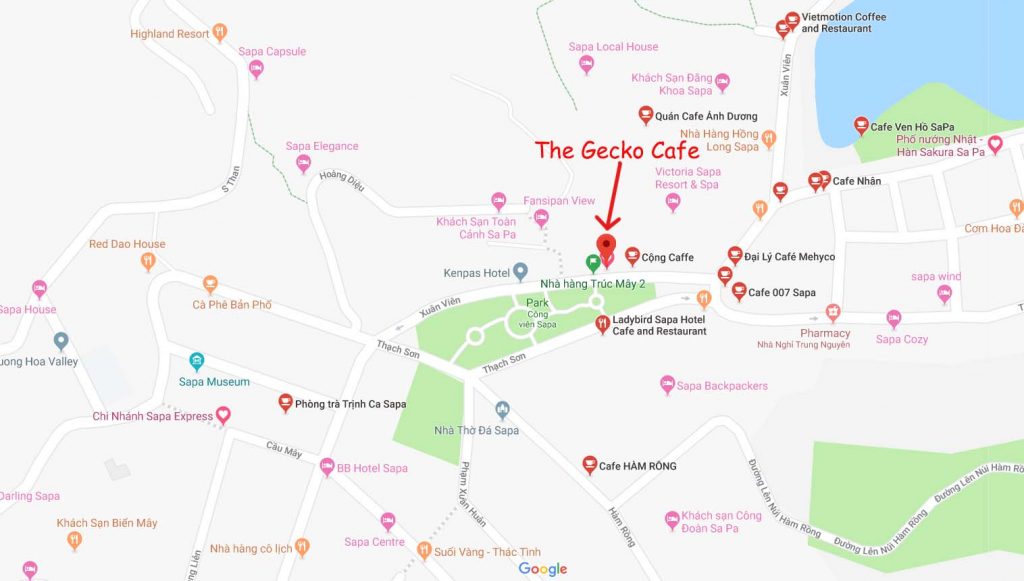 Location of “The Gecko” cafe 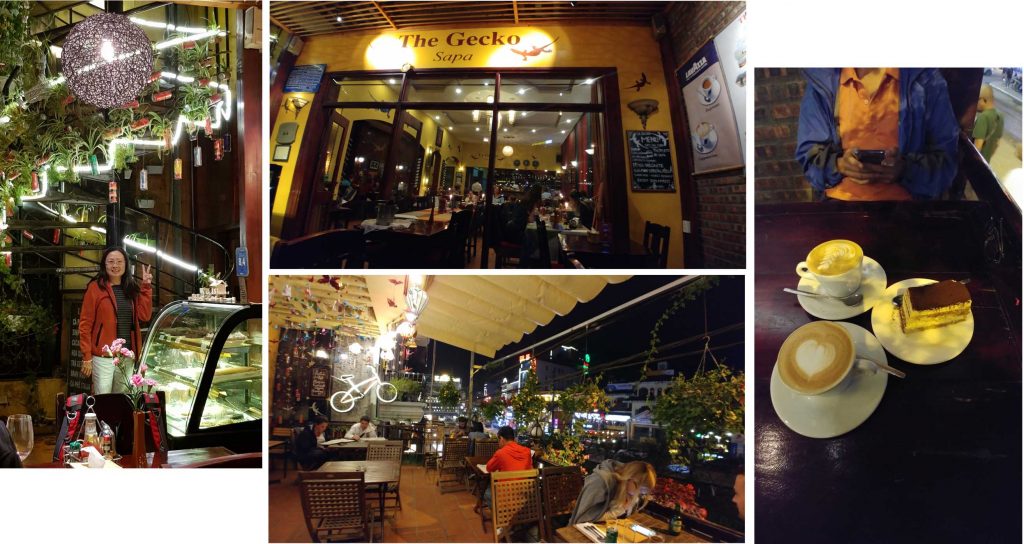 Cafe Latte and Tiramisu at “The Gecko”

The pricing of the coffee and tiramisu at “The Gecko” was similar to that of “Le Gecko” the cafe where we had dessert the day before. We had a feeling that they belonged to the same family. Our cafe latte was served very soon but our tiramisu was taking a long time coming on to the table. Then we saw a waitress of “The Gecko” walking toward us from the reoadsid (not from the restaurant) carrying a plate with a tiramisu on it! Apparently she went to the other cafe “Le Gecko” to pick up the tiramisu. We wondered why did they not served us the tiramisu from their own cake cabinet?