We planned to drive from Bangkok to Khao Yai National Park. We would be staying two nights in a hotel in the park and that would give us about two days to explore the park. We had picked up 9 destinations in the park, some of which we would like to visit in the two days.

The nine destinations were PB Valley Khaoyai Winery, Pirom Cafe, Primo Piazza, Palio Khaoyai, Ban Tha Chang Spring, Khao Yai Art Museum, The Chocolate Factory Khao Yai, Midwinter Green and Secret Art Garden. We did not think we would visit all nine, but selected them just in case we had too much time on hand. By the end of the second day in Khao Yai we visited six of them. 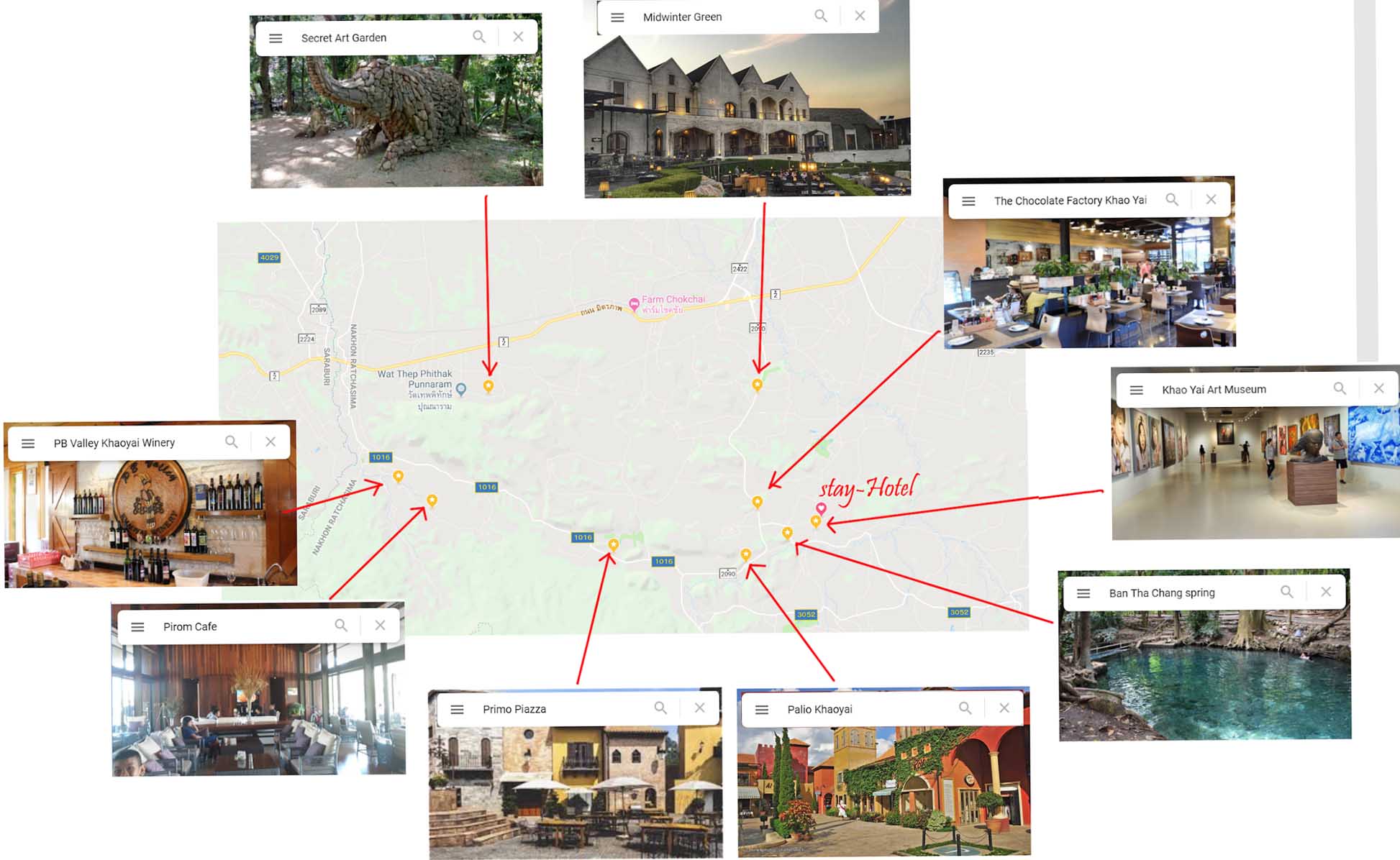 The distance from Bangkok to Khao Yai was about 164 km and under good traffic condition the journey would take about 2.5 hours. It was a working day (Monday) and we did not want to be caught in Bangkok jam. So we left our hotel at about 10 am just to be very sure that our timing would not coincide with locals driving to work.

Route from Bangkok to Khao Yai

The traffic condition in Bangkok at 10am on a weekday was pretty heavy but still the vehicles were moving. Once we got onto the highway going towards Khao Yai National Park, the number of cars on the road reduced (but still pretty many) and we were moving much faster. We saw a couple of turn-offs from the highway and the “not so obvious” sign boards seemed to indicate a resting/eating areas after the turn-offs. After making sure the turn-off also had a turn-in back into the highway we turn-off for a break an hour into our journey to Khao Yai National Park. 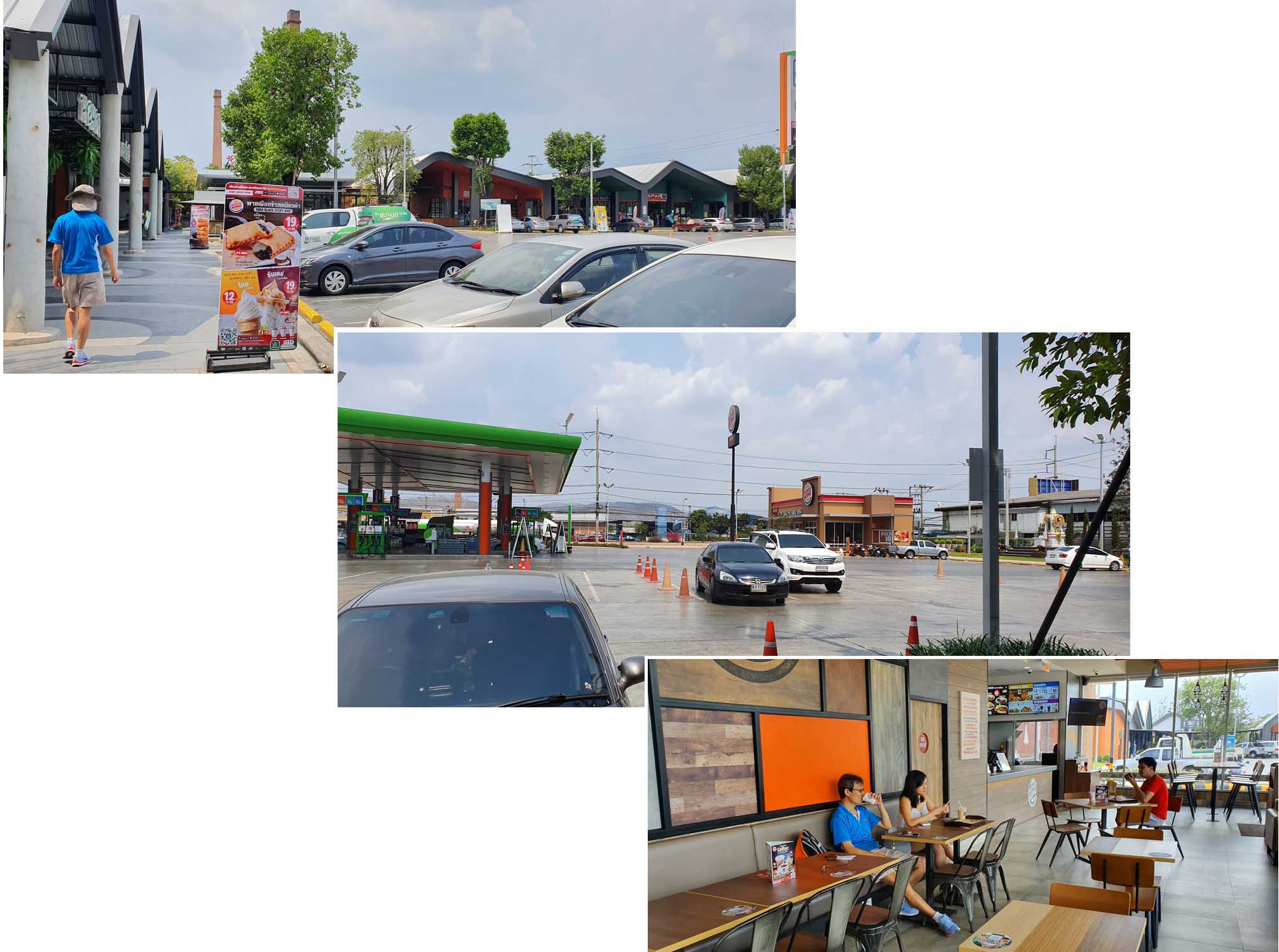 The rest area was more modern than we thought. Instead of consisting  of several single storied old shop houses that we saw along the main road. The rest area had several new and neat building housing a McDonald, a petrol station, a supermarket, shops and some small eateries. We took a one hour break for coffee, icecream and some pastries. It was nice to stretch our legs before continuing our journey. 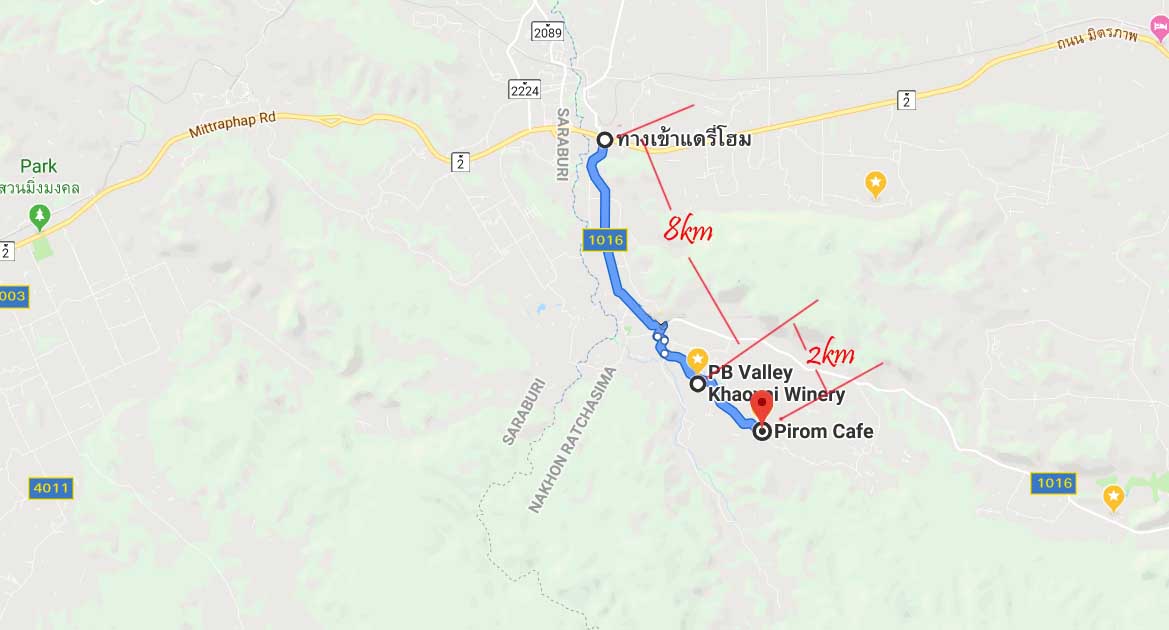 Luckily by the time we reached the cafe, the drizzle lightened so we parked our car in a huge car park on site. Then took a short walk down a slope to the cafe building. Pirom Cafe was an unexpectedly beautiful place! 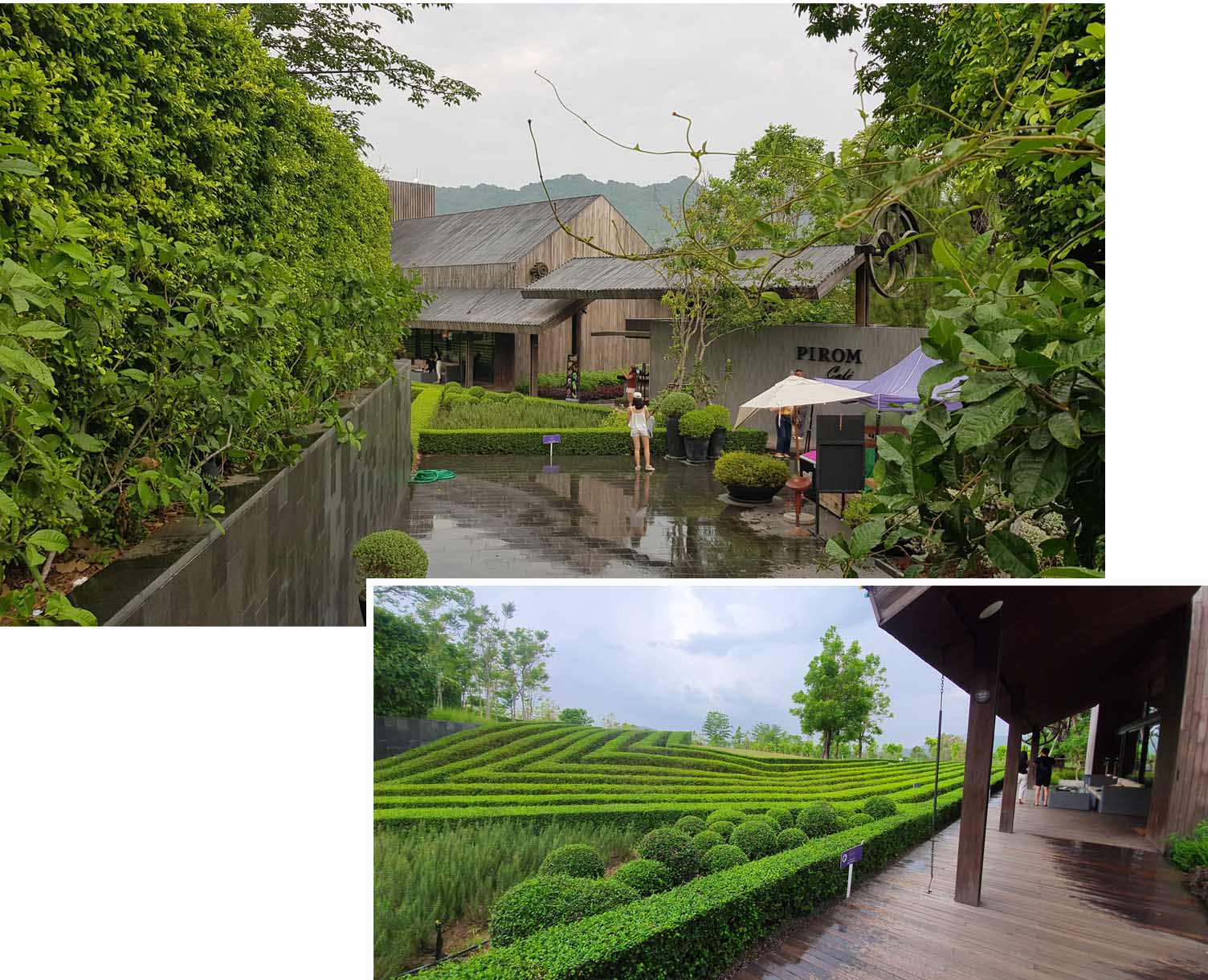 Pirom Cafe had an indoor and outdoor cafe sections. The outdoor sections had one that faced a maze like hedge and the other that faced a lake. We ordered our cafe lattes (95 baht each cup) and chose our cosy seats facing the lake. They did not sell nice pastries so we bought “grapes” (130 baht for a huge punnet) to go with our coffee. Apparently Pirom Cafe belongs to PB Valley Khao Yai Winery and the grapes were grown at the winery. These grapes were just plucked off the vine this morning! 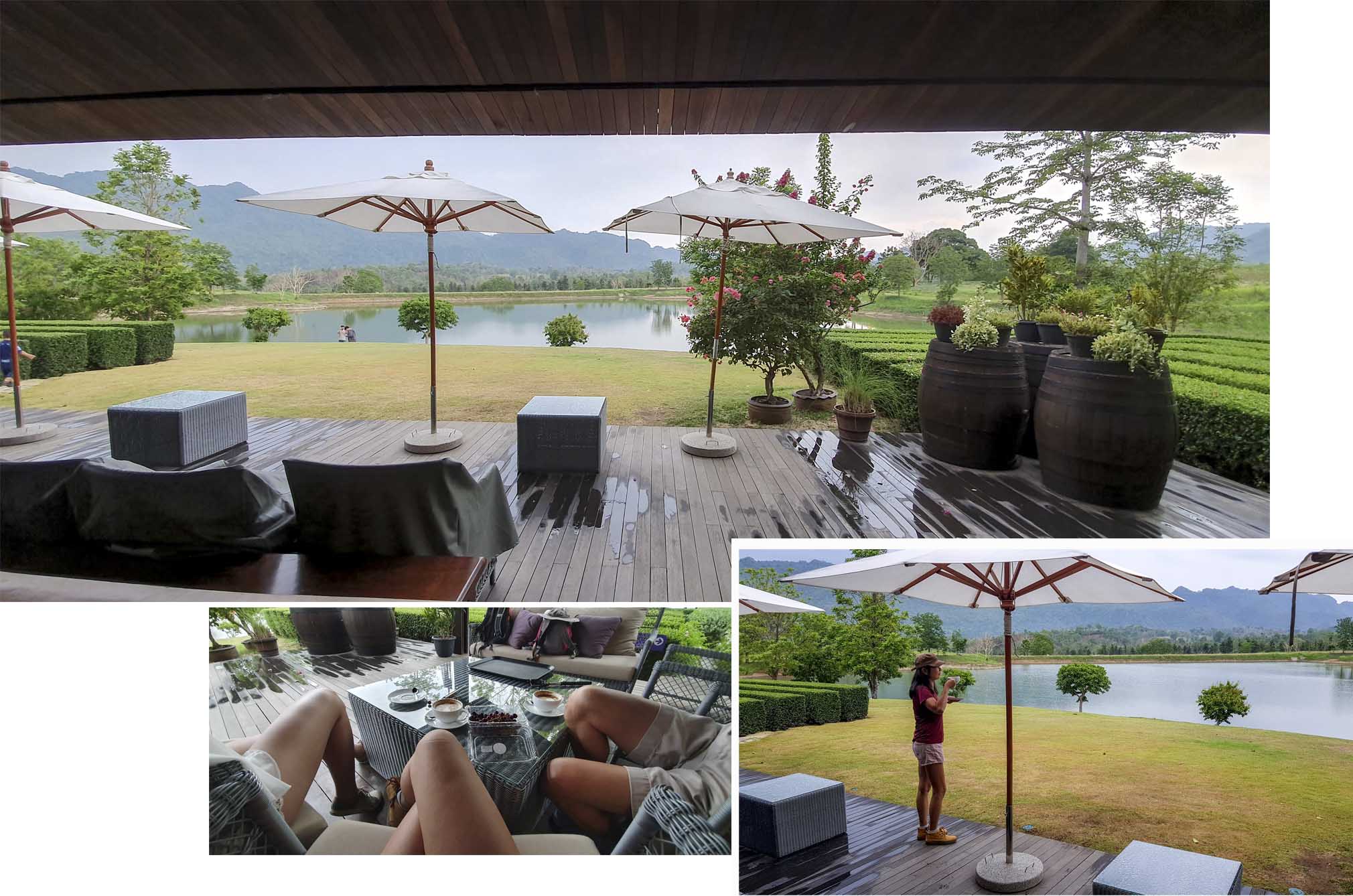 Probably due to the rain there were not many visitors at Pirom Cafe, we practically got the whole enomous place to ourselves. It was so relaxing and so luxuriously to  slouch back on the sofa chairs,  glaze at the surrounding greenery, be mesmerised by the peaceful lake and breath in the clean cool air. We ended up spending more than two hours at Pirom Cafe before we eventually pulled ourselves up and moved on to our stay.

Our stay at KhaoYhai Natural Park

We had booked a deluxe  twin room at “Mont Blanc in Khao Yai“.  The “stay” was about 27 km east of Pirom Cafe. Along the way we passed Primo Piazza, Palio Khaoyai, Ban Tha Chang Spring. It was already going 6 pm so it was too late to visit any of the three. We arrived at Mont Blanc in Khao Yai and turned into its open carpark. 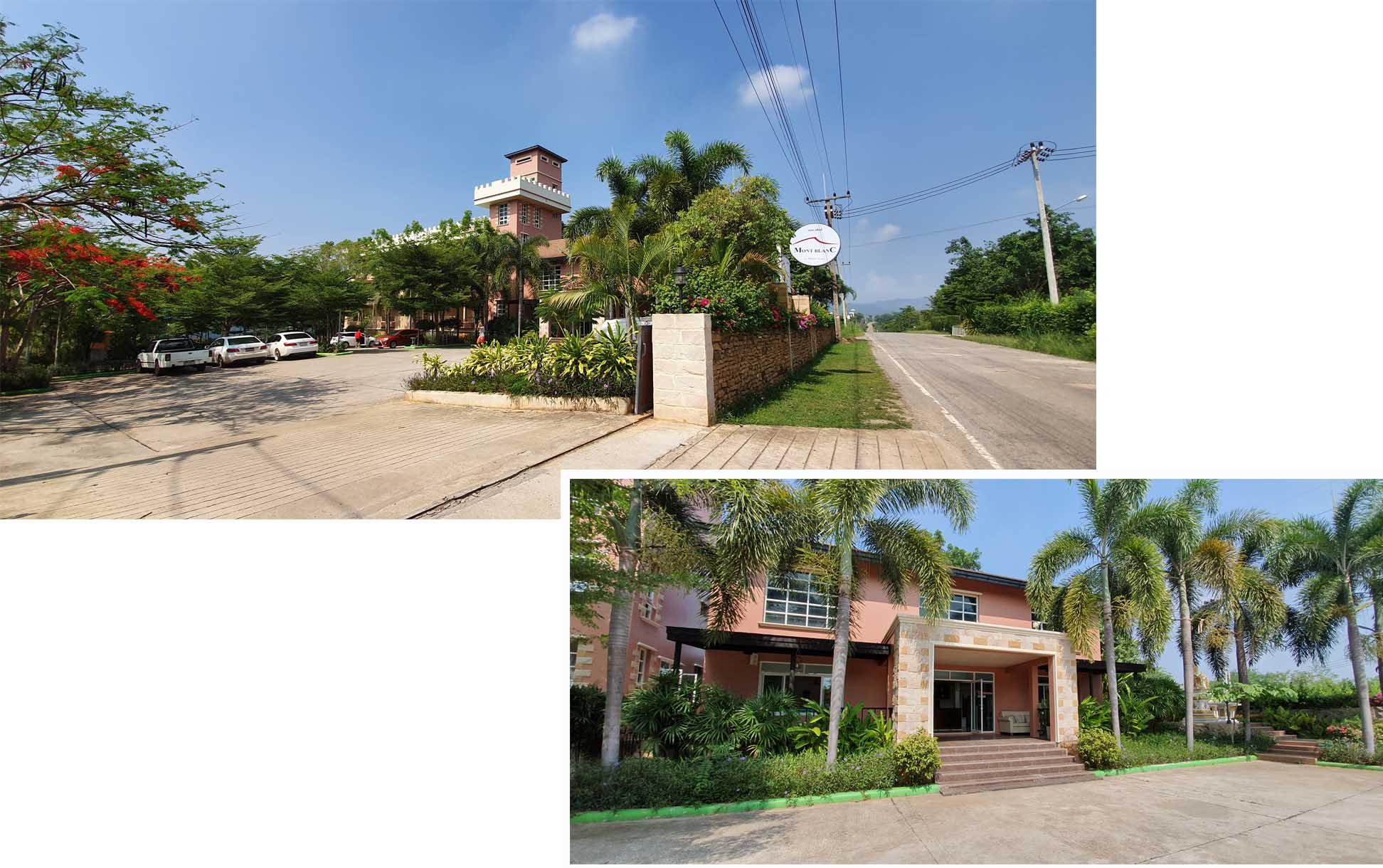 The room booking was done on Agoda.com and it costed 1800 baht ($77 sgd) for two nights. The room came with breakfast for two. We paid more for a room with a pool view. The online description of the room stated two beds of which one was a queen size bed, so we knew the room was big enough for three persons. At the reception we requested to add a third person to the room (including breakfast) and was required to pay 300 baht ($13.20 sgd) for two nights. This amount was so much lesser than the $42 sgd that we would have to pay if we were to add the third person online.

Our room was in a separate building behind the reception building. It was on the 2nd floor. 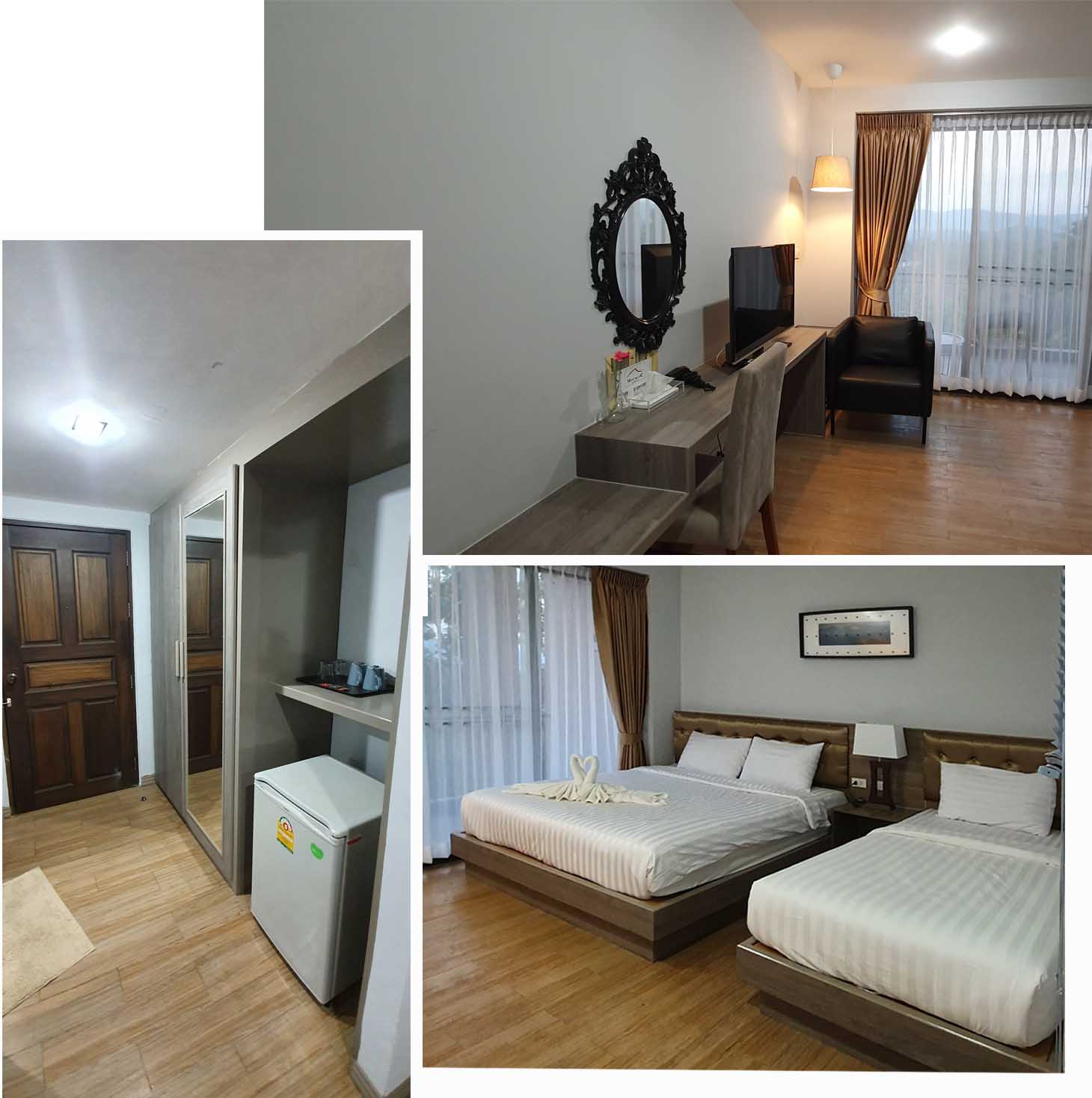 Our room at Mont Blanc in Khao Yai

The room somehow did not seem as nice as the one in the picture on the Agoda booking website. It was clean but was a bit run down. From our balcony we could look down to the swimming pool below. The water looked “greenish” and not clear at all. We saw swimmers swimming in their shorts and T-shirt. The pool did not feel clean, so instantly we “canned” all the ideas of swimming during our stay! 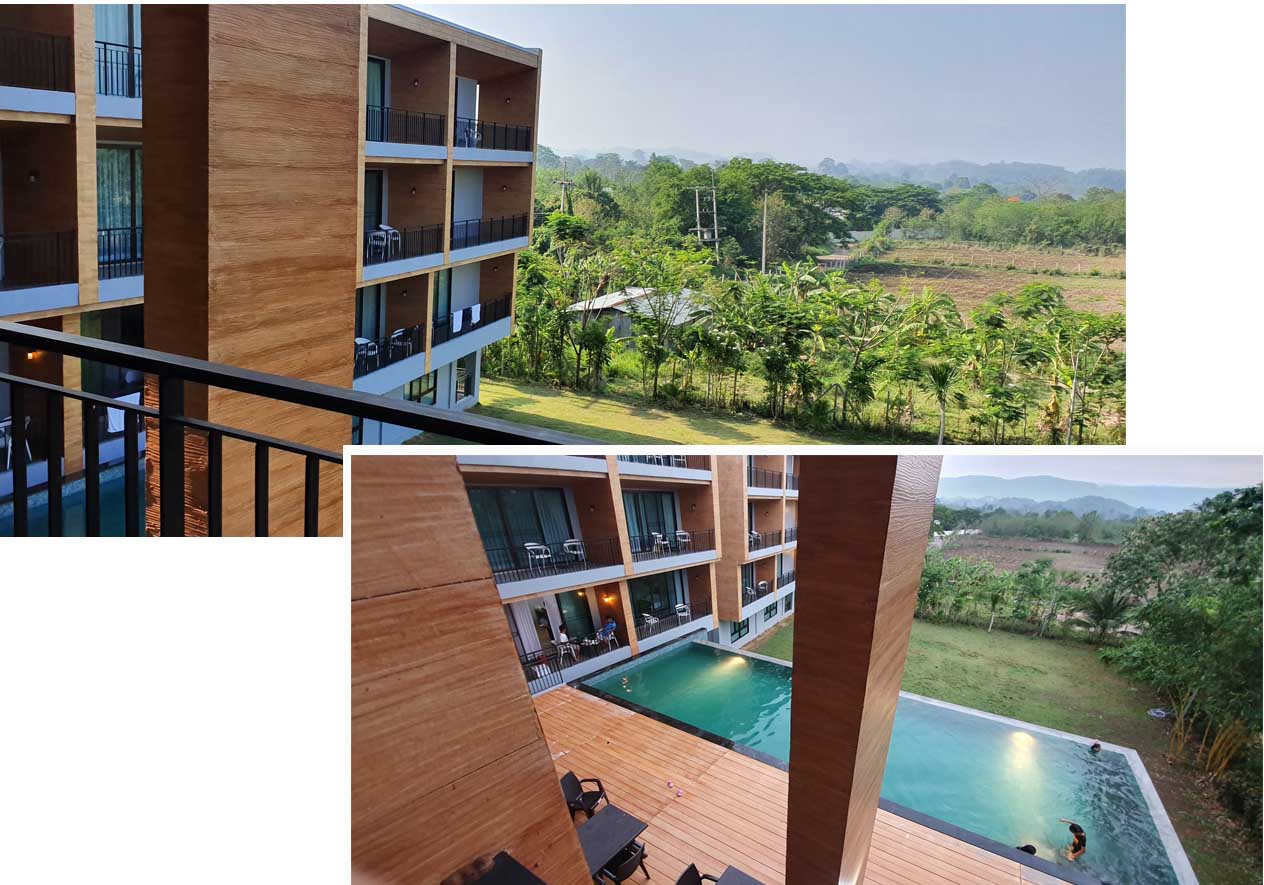 Balcony view from our room

The bathroom was clean and huge, but like the room it was not well maintained there were little cracks here and there. 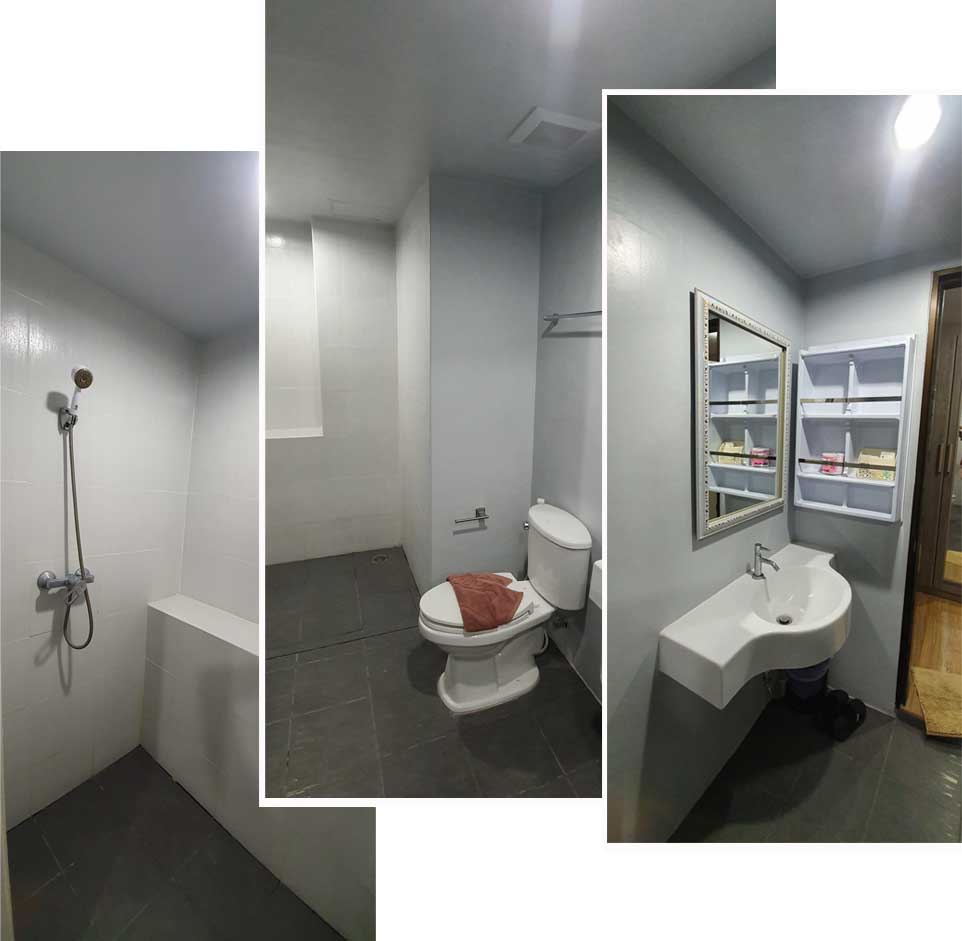 We had our dinner just a short drive from Mont Blanc in Khao Yai. The restaurant was called “Jowhook Cafe” and the entire place/ground was decorated with owls! 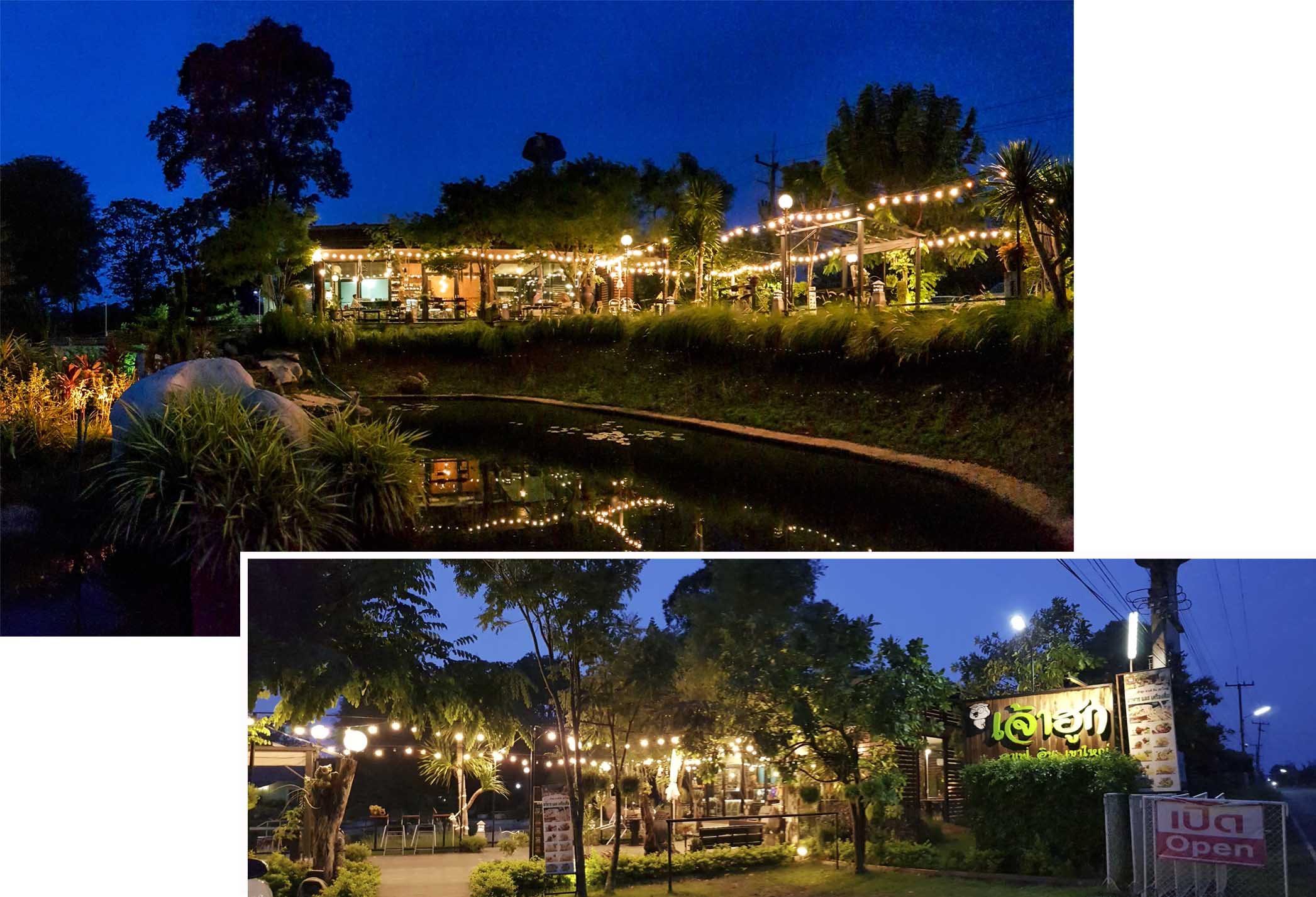 Owls were everywhere, some were big others were small. Some were made from wood otherw from clay. Some were plain white in color and other were colorfully painted. There were on the table, on the counter, hanging on the trees, sitting on the rock…everywhere we turned we could find an owl. 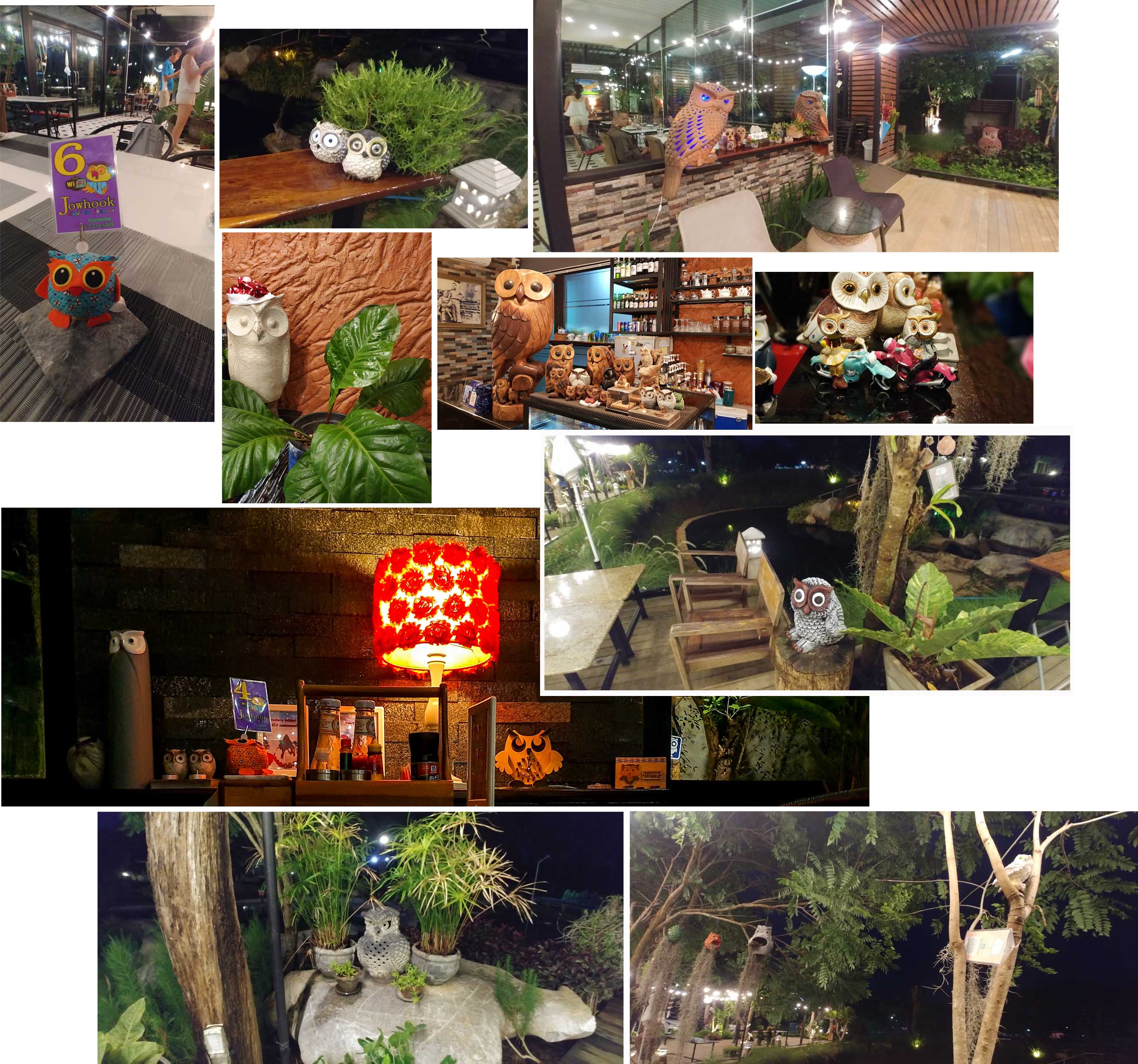 We were disappointed that the cafe did not serve typical Thai food. It was late and we were tired and did not want to drive around to look for another cafe so we stay put. We ordered smoked duck, crab omelette, pork knuckle and a prawn dish. Dinner came up to 1150 baht ($50 sgd), pricy by Thai standard but very okay for us. Most important of all the food was great. 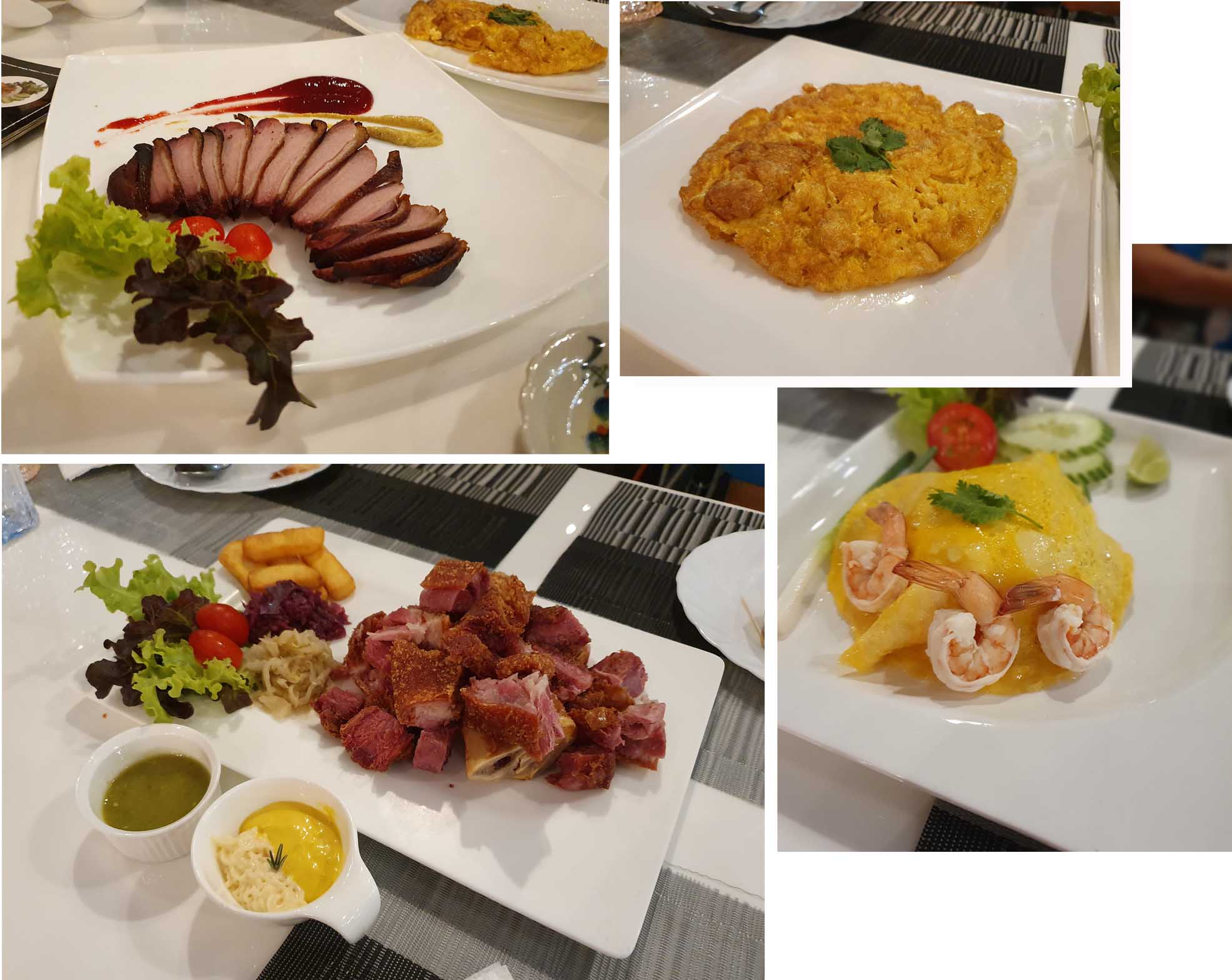