In the morning after we left Covadonga we drove a long way (128 km) for about 2.5 – 3 hours to Someido Natural Park. On arrival we found that our car could not go all the way to our targeted destination. We would have to trek in the hot sun for another 3.5 km to get to the site. This unexpected event led us to abandoning the visit to Someido Natural Park and moved on. 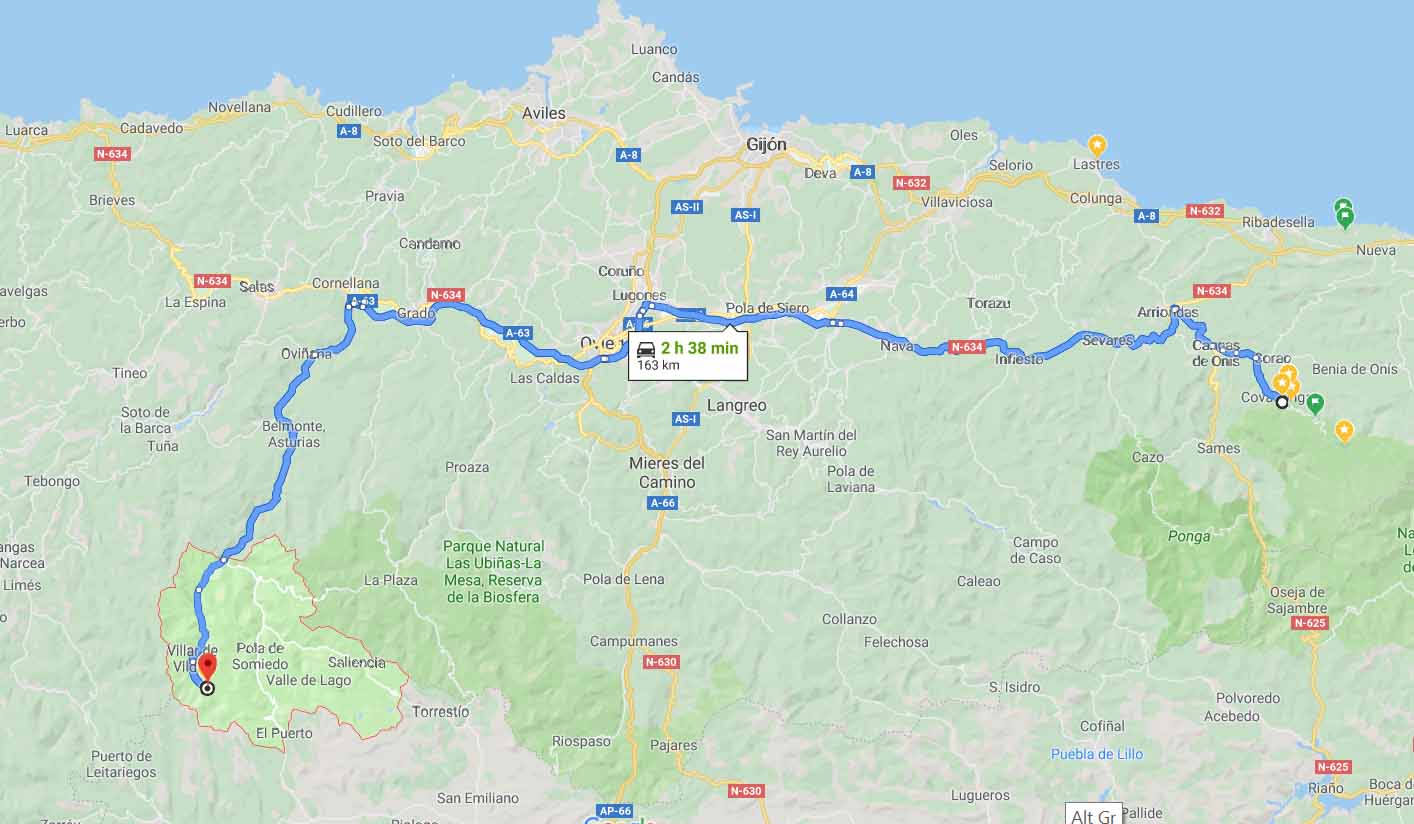 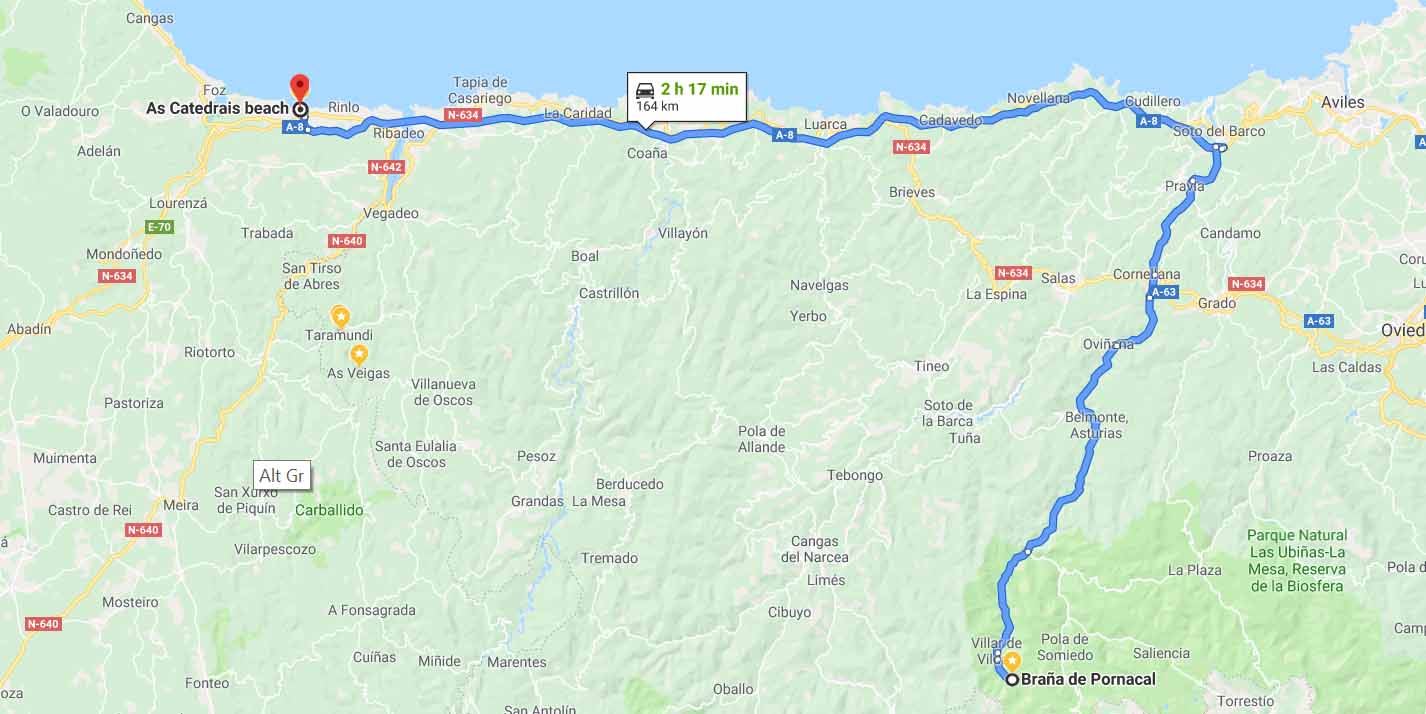 Route from Someido Park to As Catedrais Beach

Getting to Someido Nature Park

Our drive to Someido Natural Park was supposed to be about 2.5 hr, but after 2 hours of driving we were still one hour away. The drive seemed longer than that indicated in google map. At 12.30 noon we stopped at a local cafe (co-ordinates: 43.353545, -6.183180) to have a coffee break. It was a small quaint cafe packed with locals crowding near the counter drinking, munching and chatting. I wondered if this place had a dining room hidden behind which could be the reason these locals were crowding at the counter – maybe waiting for the kitchen to start lunch).

We too found a place at the counter and ordered two cups of cafe latte. On the counter top there were several trays of bite-size food. There were small pieces of bread topped with bacon and cheese, sticks of square cheese topped with olive etc etc. I picked up two of them and ate them with my cup of cafe latte. It was a surprise when we made the payment! 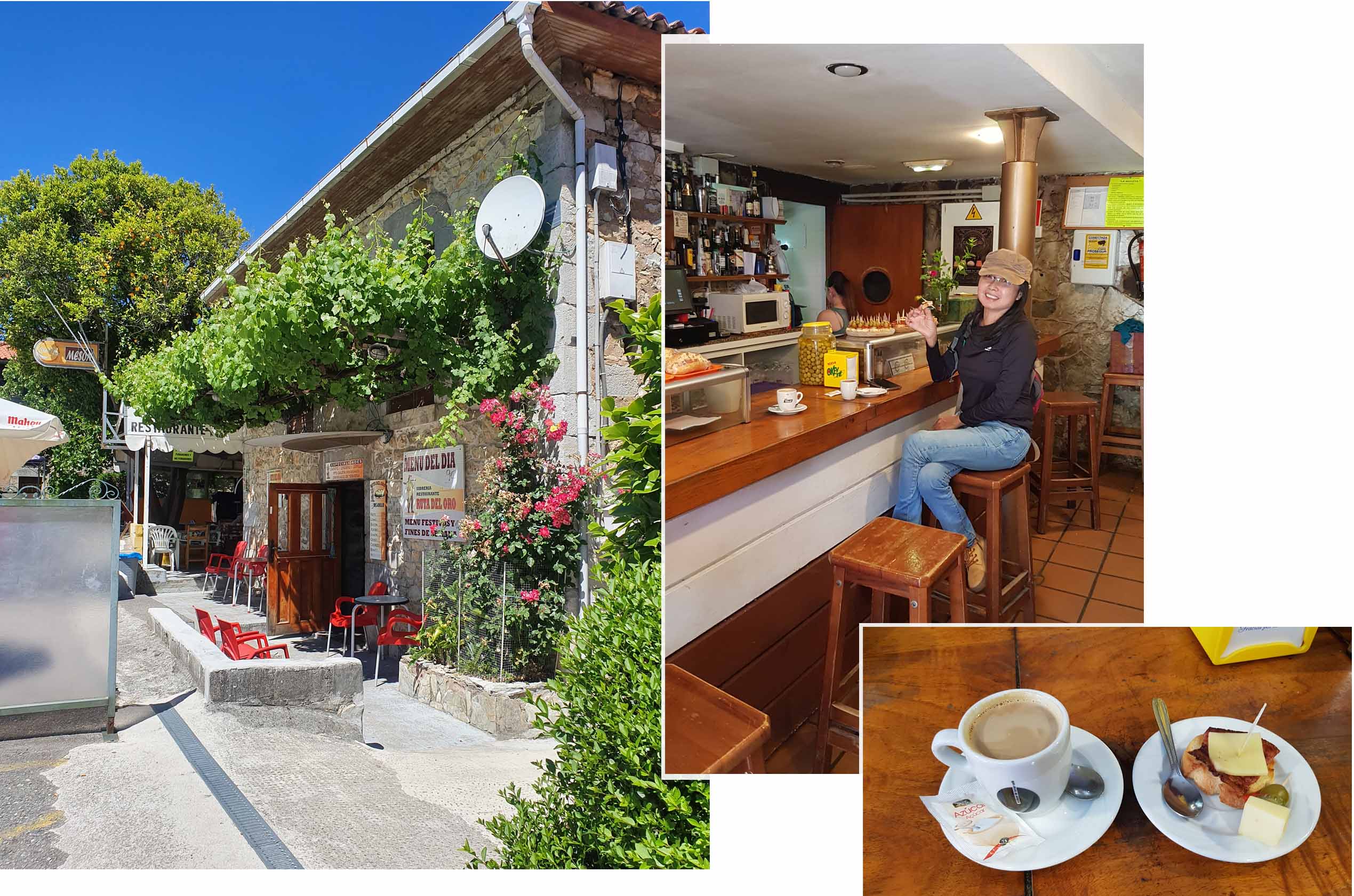 The entire bill came up to only €2.20. I explained to the staff that we had two cups cafe latte and two bite-size food, there were four items and not two latte as indicated on the receipt. The staff in not so many words told me the tapas were free, there were served with the cafe latte!

From the cafe place to Someido Natural Park was another 42 km which would need about an hour to reach. We felt happy to be at the last stretch of the journey. At Aguasmestas (village) we took the right side of a branch road and drove for another 12 km before we reached Villar de Vildas (village). We needed to crossed the village to get to our destination. Unfortunately the village road was too narrow for our car to pass. The corners of the houses jugged into the road and there was no way for our car to get through without being scratched. 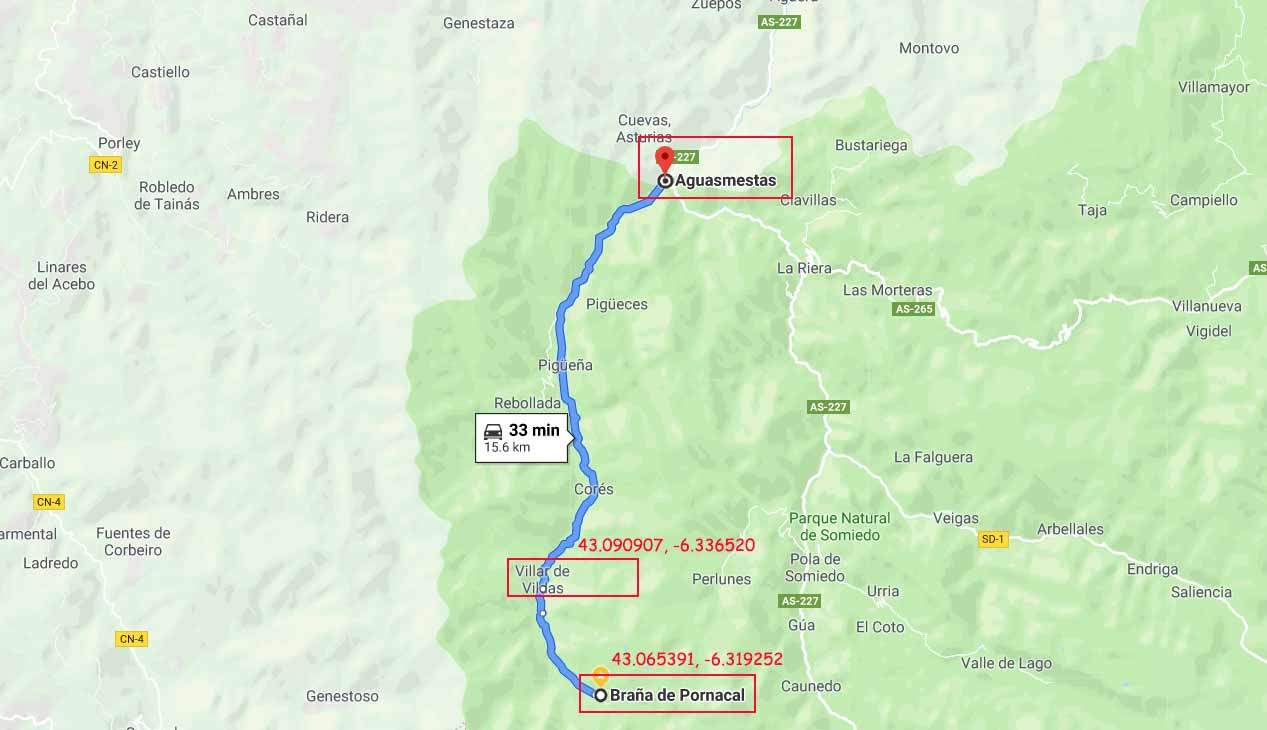 We searched around and found a huge public carpark nearby. In the carpark there was a huge signboard indicating that we it would be a 3 km trek to Someido Natural Park. It seemed like this place was where visitors should be parking their cars and proceed on foot.

It was too hot for a trek! A visit and a round trip to Someido Natural Park would need addition three hours which meant that we would only reach “As Catedrais Beach” after sunset as the beach was  another 2.5 hours drive away. We had to reach As Catedris Beach before sunset!  So after some thought we abandoned our visit to Someido Natural Park. 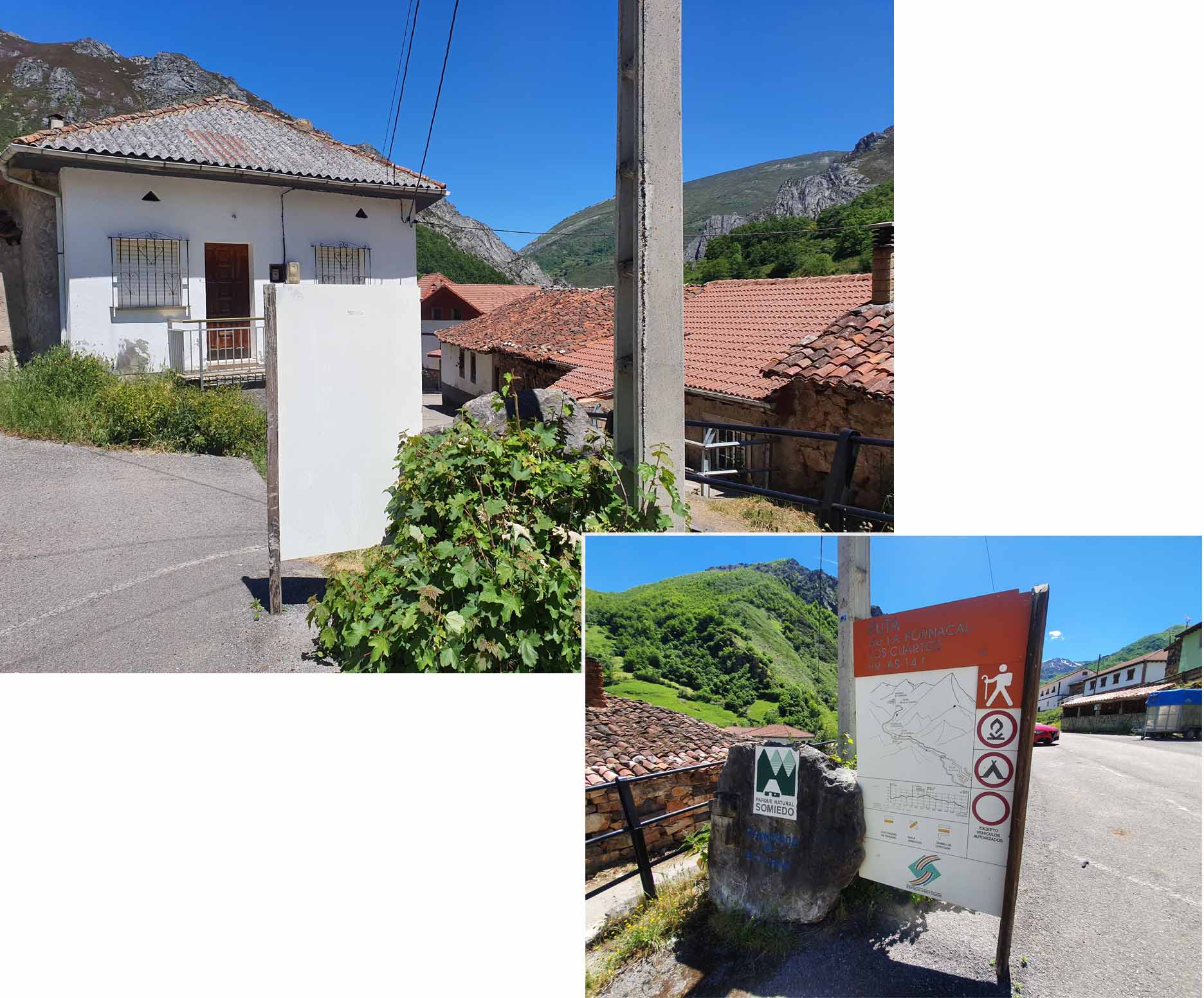 On hindsight we should have searched for another alternative road to drive to Someido Natural Park. Somehow it was a tiring and hot day and our “brain” function was not thinking properly. Looking at the google map a few days later we could see alternative roads through the village that would bring us directly within 100 metre of the park!

One of our indulgences in Europe was Magnum Ice Cream which was selling at incredibly low prices. Back home in Singapore every stick of Magnum Ice Cream (normal size, 120ml) costed about €2.30, in Spain three Magnum ( (normal size, 120ml) was going for €1.99 in local supermarket. With such prices it was very difficult to resist eating Magnum as and when we had the chance. So whenever we felt the urge especially when the weather was getting hot we would drop in at a supermarket and pick up a pack of Magnum, usually three sticks, We would find a good corner in the supermarket and finished the ice-cream before going on. 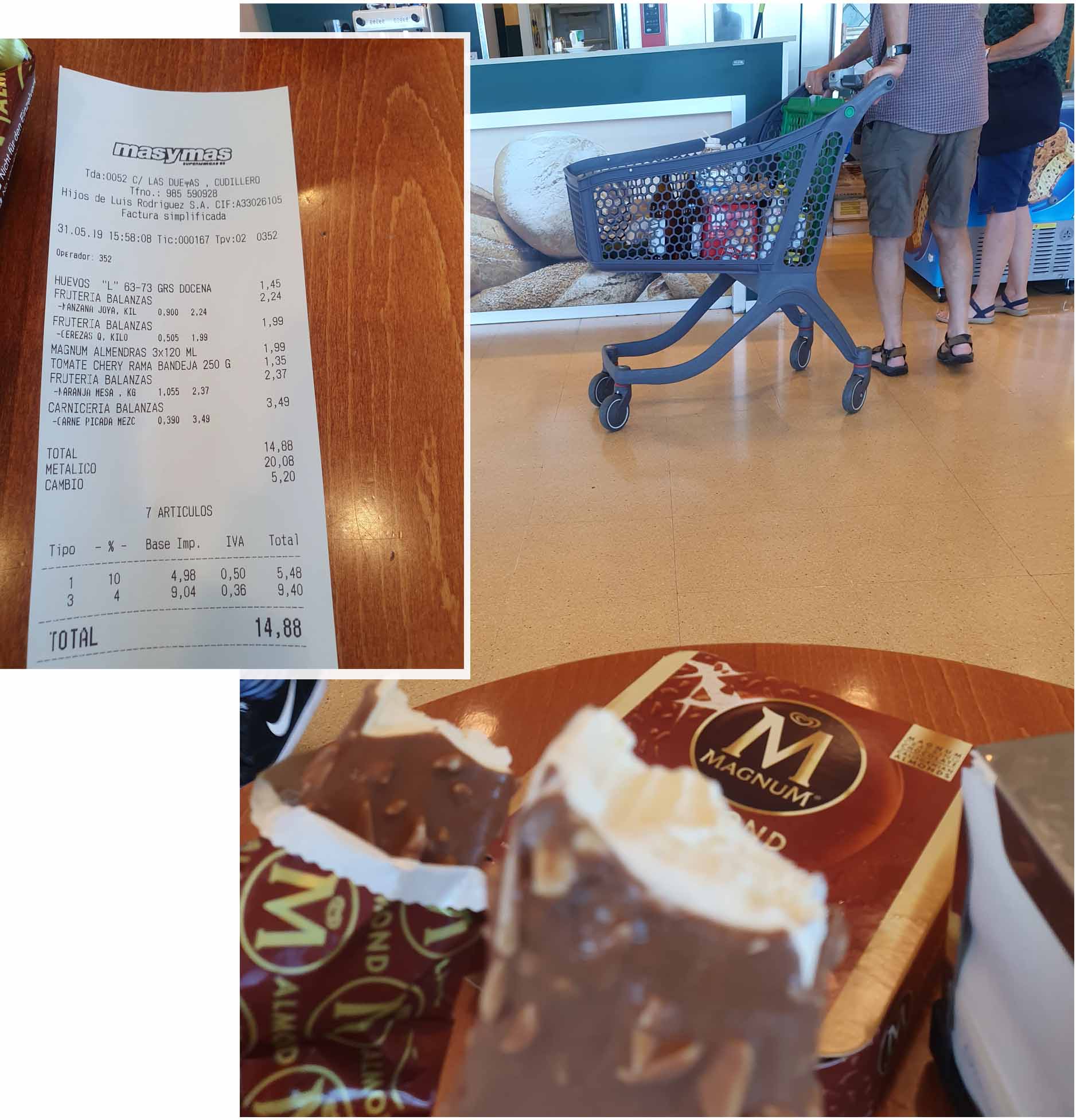 We reached one of the public carparks at “As Catedrais Beach at about 5 pm.  It was a huge car park and there were many camper-vans parked there too. We were supposed to be at our “stay” to meet our host at 6 pm, since we were early we drove to “As Catedrais Beach” to do some recee. 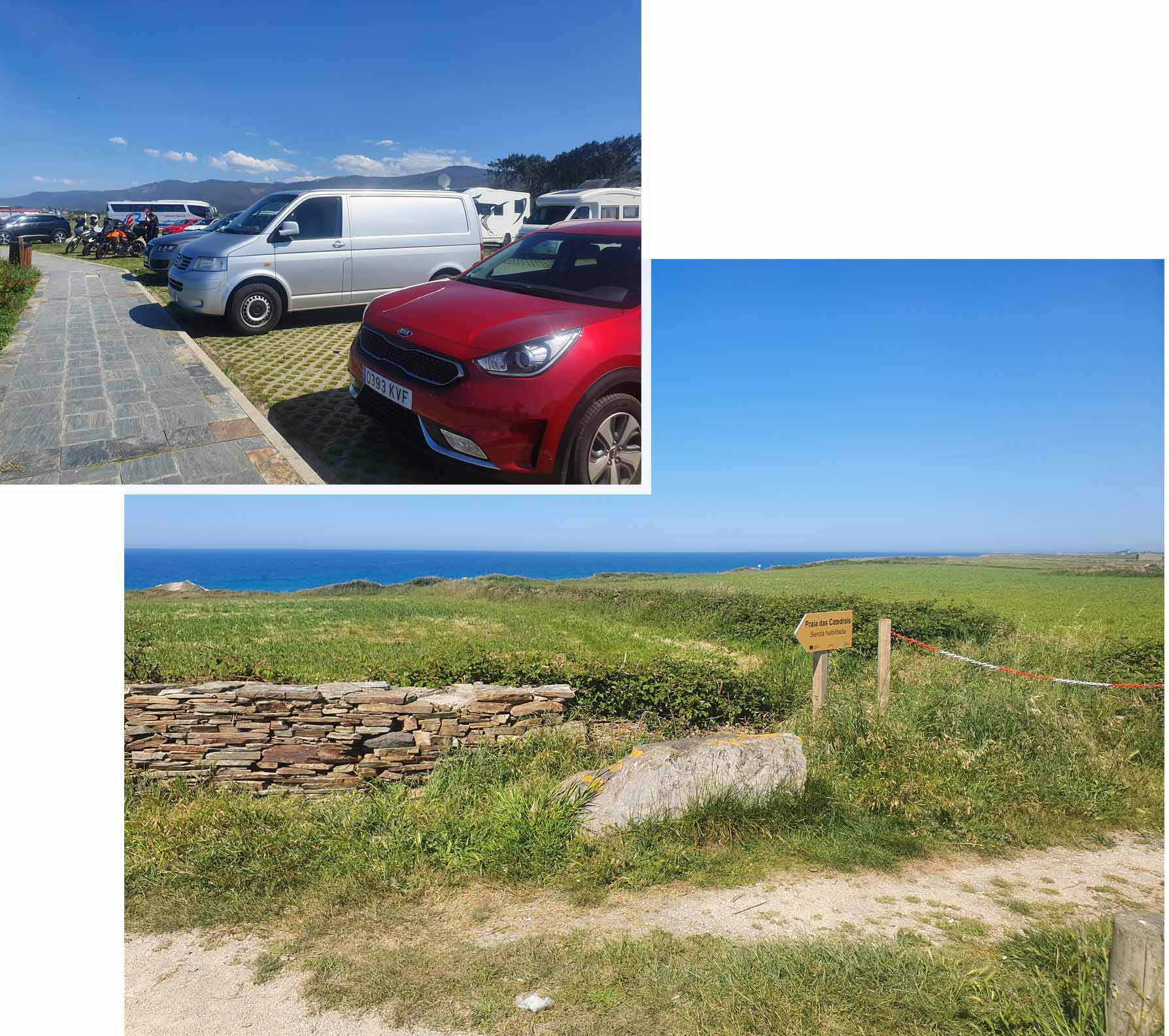 Public carpark and around at As Catedrais Beach

The stretch of “As Catedrais Beach” was pretty long, and where would be the famous “Cathedral Caves” be along this stretch we had no idea .  Our carpark was located  in the middle part of the stretch so should we move westward or eastward. We decided to go west! 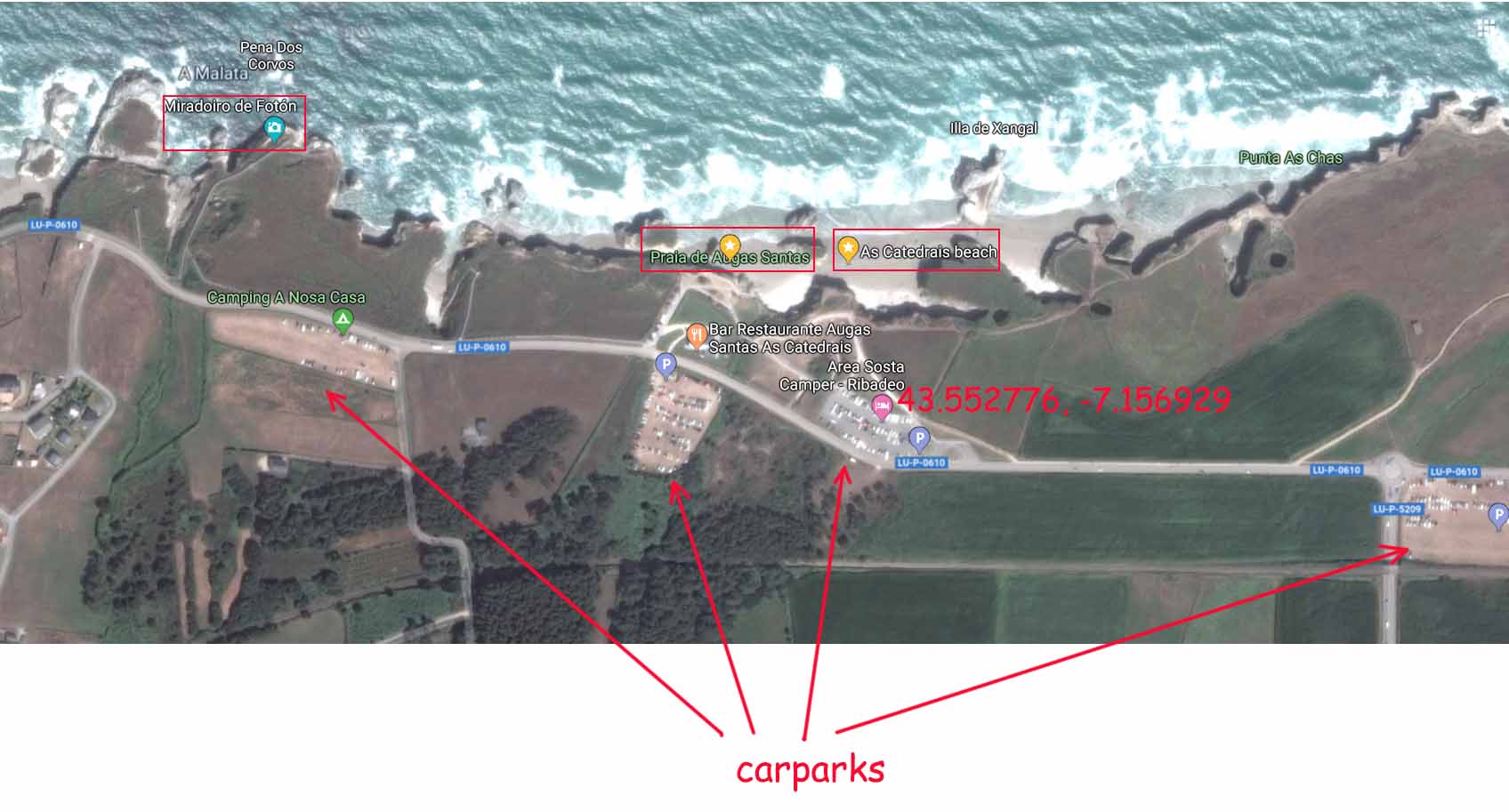 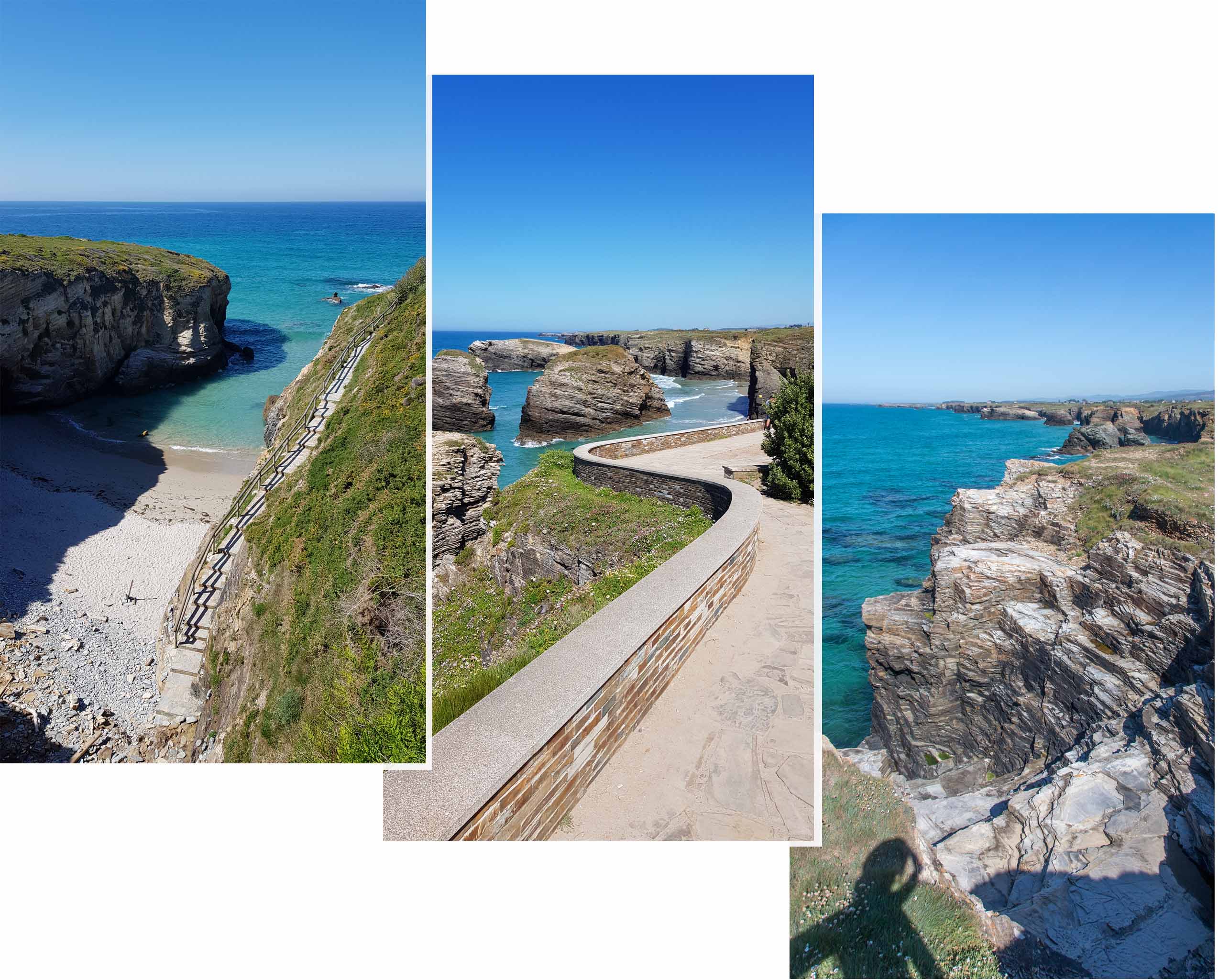 It was only after we checked in to our stay and talked to our host that we got the location of the famous Cathedral Caves of “As Catedrais Beach”. There was a path down to the beach near the Bar “Restaurante Augas Santas As Catedrais” which was about 200 m westward of the carpark where we had earlier parked our car.

At about 8.50 pm we were back to the same car park again. We still had about 40 minutes before sunset. All around us 360°, top to bottom the air had this unreal golden sheen. We walked down to the beach from the steps just in-front of “Bar Restaurante Augas Santas As Catedrais”. The tide was low so the beach was exposed.  We walked towards the east in the direction our host told us.

The sun was already setting and we had to hurry or we would not be able to see the Cathedral Caves under the golden ray of the setting sun. But our progress we impeded because we were mesmerised by all the other scenes around us that we kept stopping to photograph this gorgeous beautiful place. 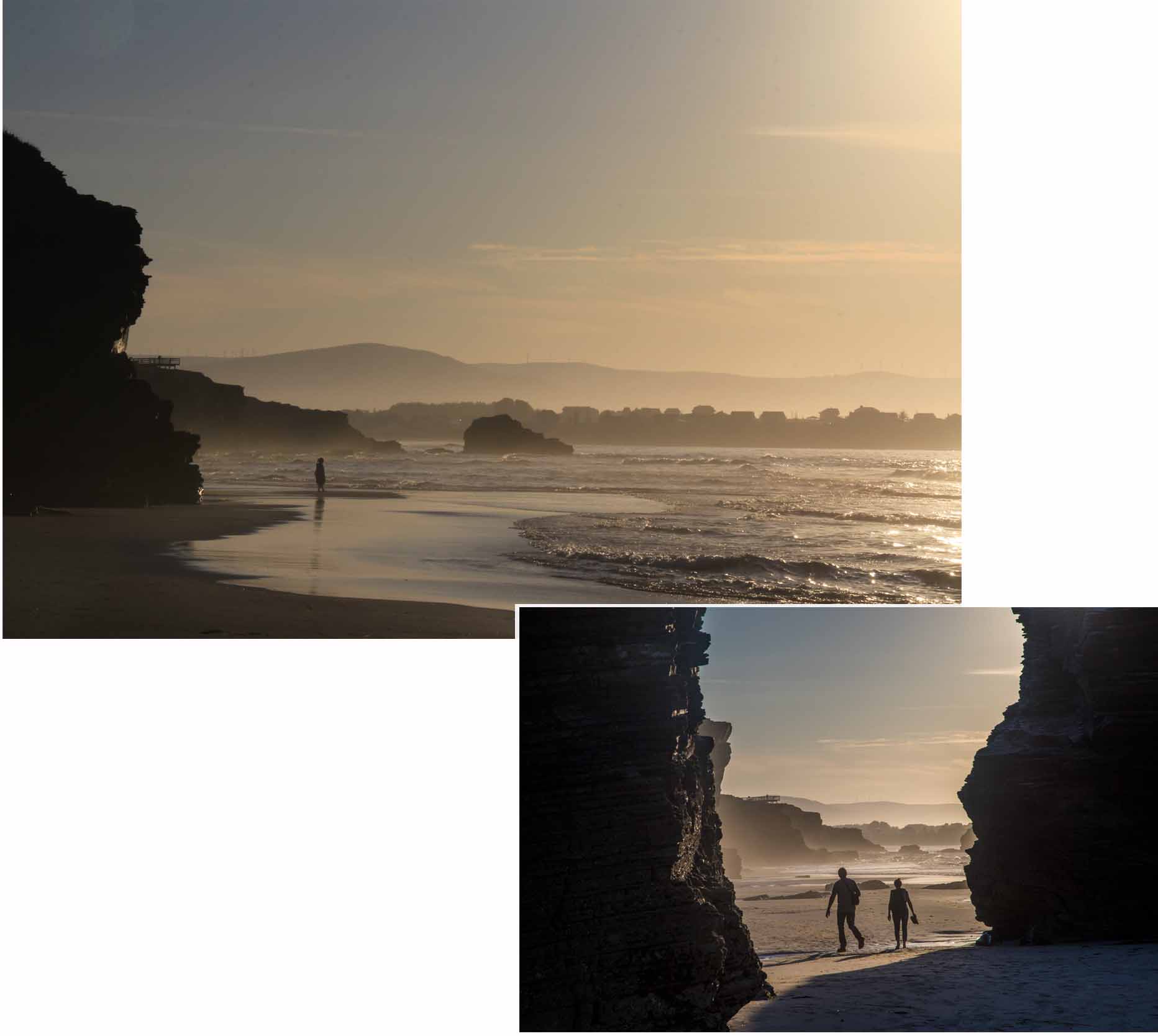 Finally we reached the Cathedral Caves and waited for the sun to set. It was amazing, we stood inside a “topless” cave and looked outward through its opening that faced a couple cliffs that looked like giant doors. The rays for the setting sun was turning the rock surfaces golden. The scene was so captivating.. so beyond description. We waited until the sun rays were not directly on the rock faces  and the golden rocks turned to grey before we left. 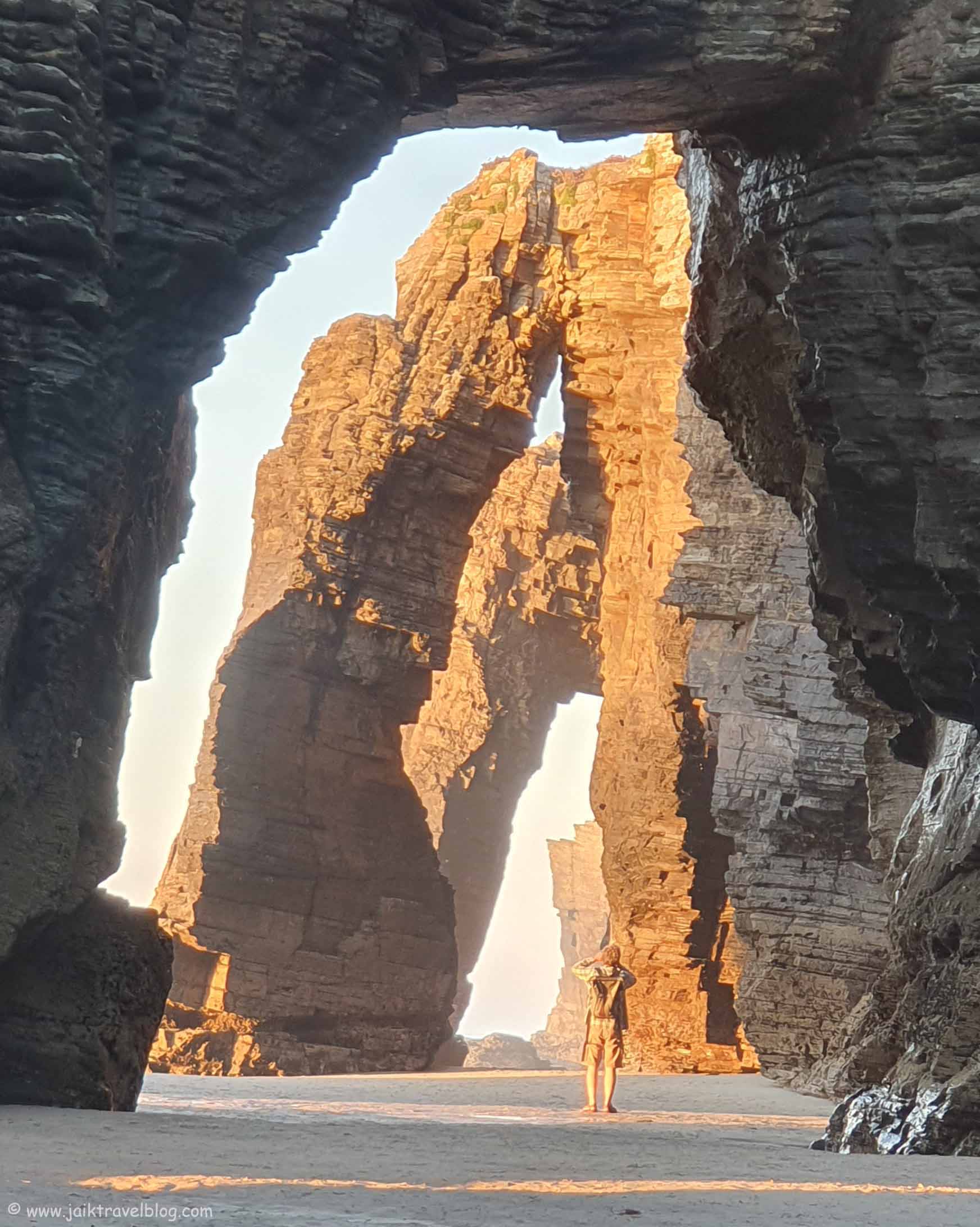 Cathedral Caves of “As Catedrais Beach”

We strolled back to the steps, the sun was setting over the mountain range over the horizon. The scene around us was still very beautiful. The sea water was no longer  blue but a sort of grey-blue with a layer of golden glaze on top. 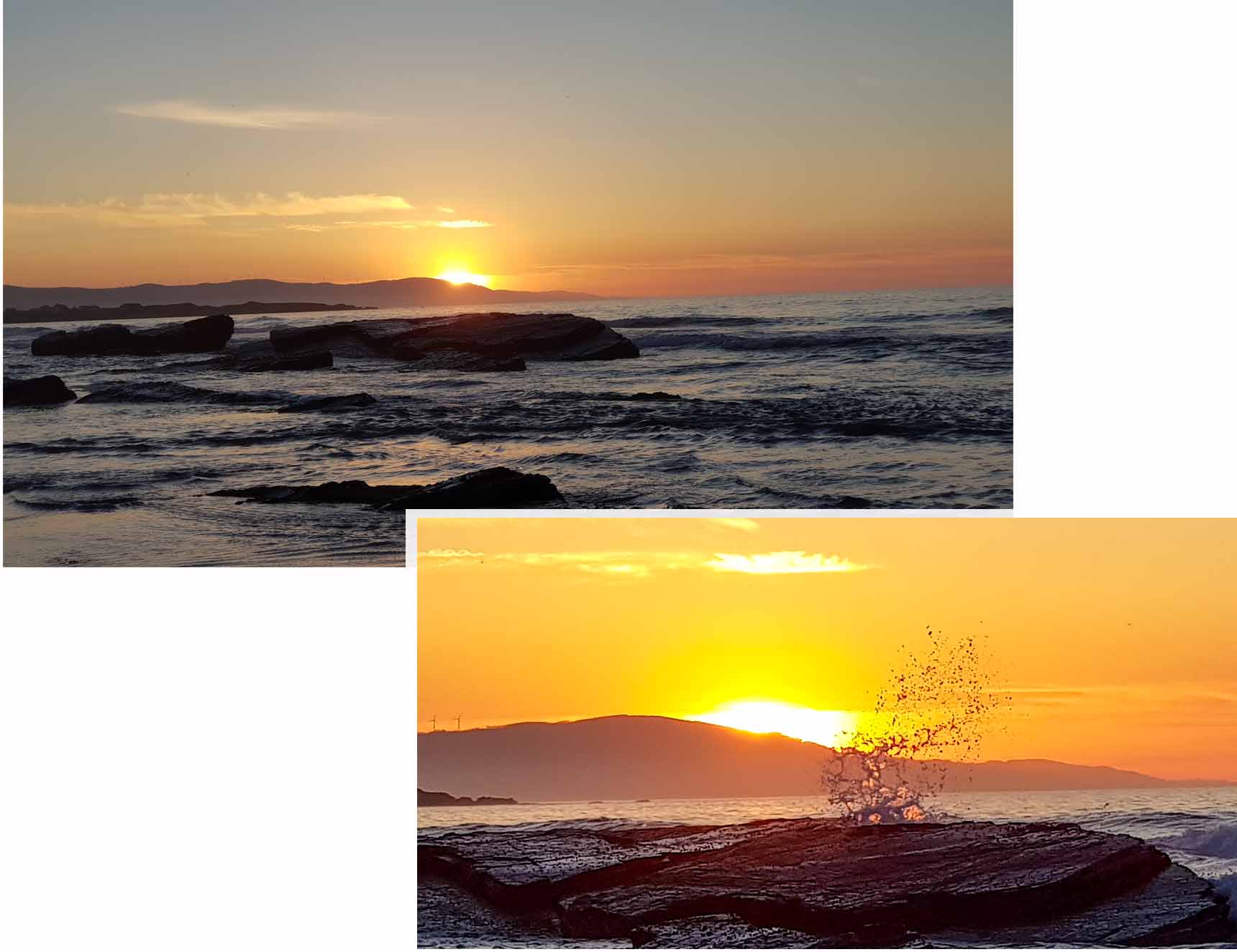 We stayed on the beach till the sun went behind the mountain range. The sky glowed beautifully. We had seen many sunset in different parts of the world, and yet we were never tired of it. By the time we left “As Catedrais Beach” we felt this strong “sense of contentment”.  We knew that the Cathedral Caves would be lovely but to see it at its best was not always possible. Not only must there be sunset the tide had to be low enough for us to be on the beach. 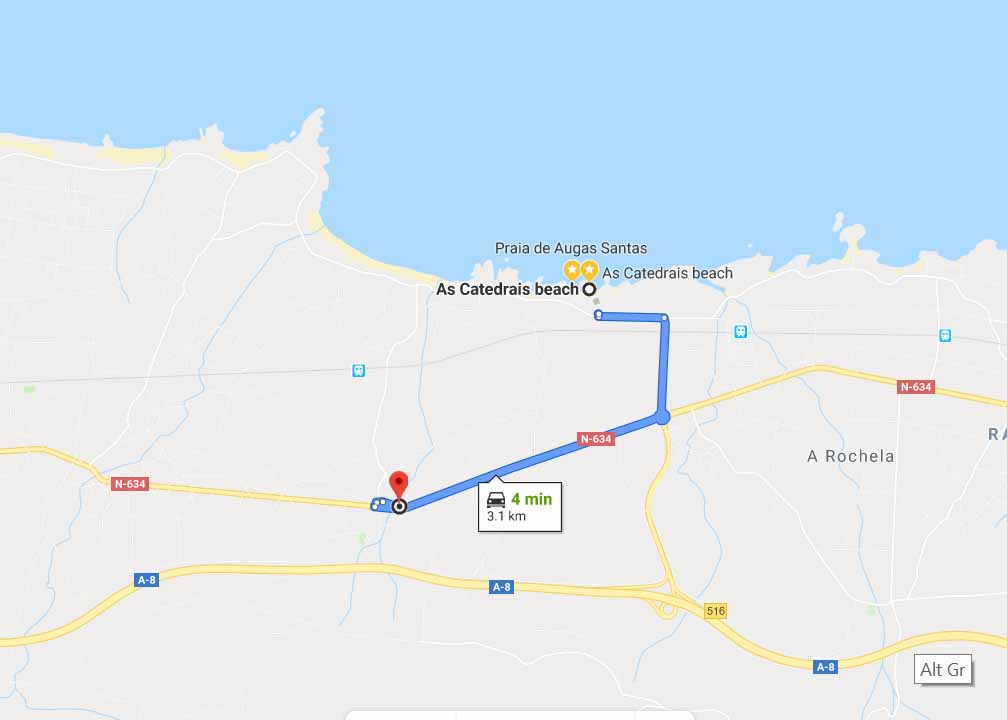 Route from “As Catedrais Beach” to “Pensión Casa Elena”

Our “Pension” was in three level house with rooms on the all three levels. Our host was not in when we arrived and his mum let us in. Unfortunately she could not speak any English so we had some difficulties understanding each other. 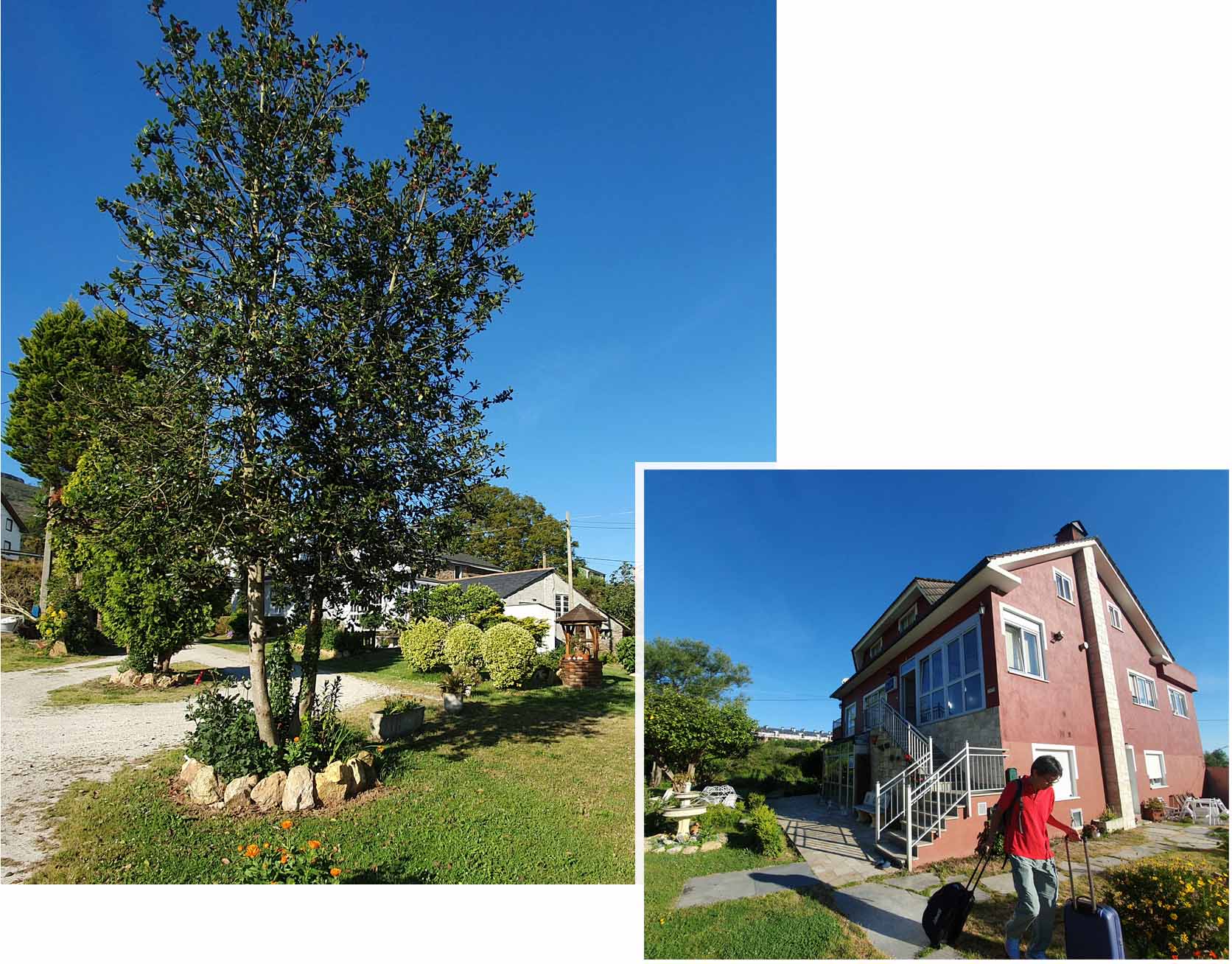 The rooms in the upper level had a common kitchen which looked too basic and small to do any comfortable cooking, so we picked to stay on the ground level where we saw a huge shared kitchen and dining area. 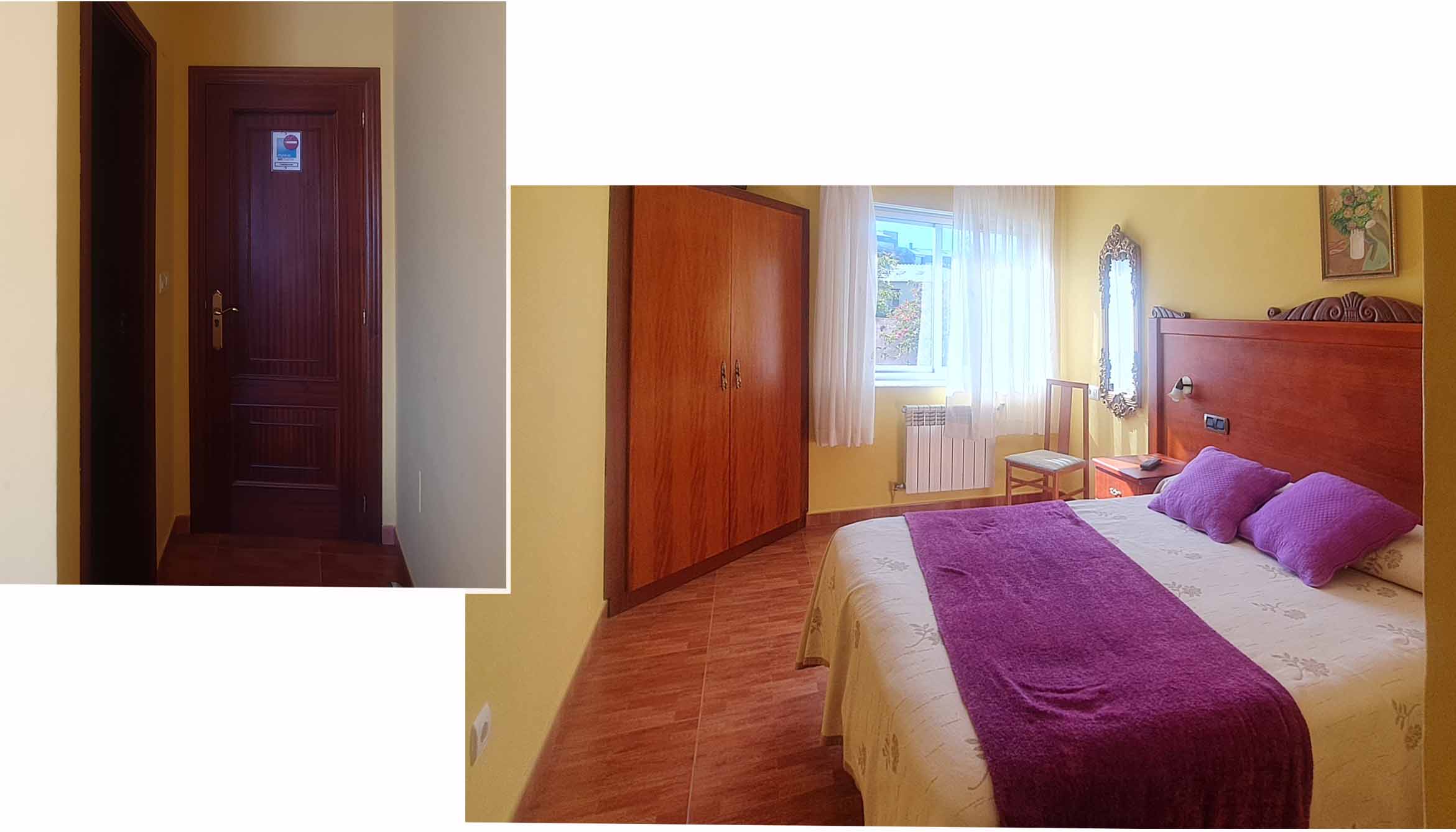 Our room was clean but rather small,  the TV  was placed on top of the wardrobe as there seemed to be nowhere else to hold it. It was too high to be of any use and the TV reception was bad. The ensuite toilet was large and clean 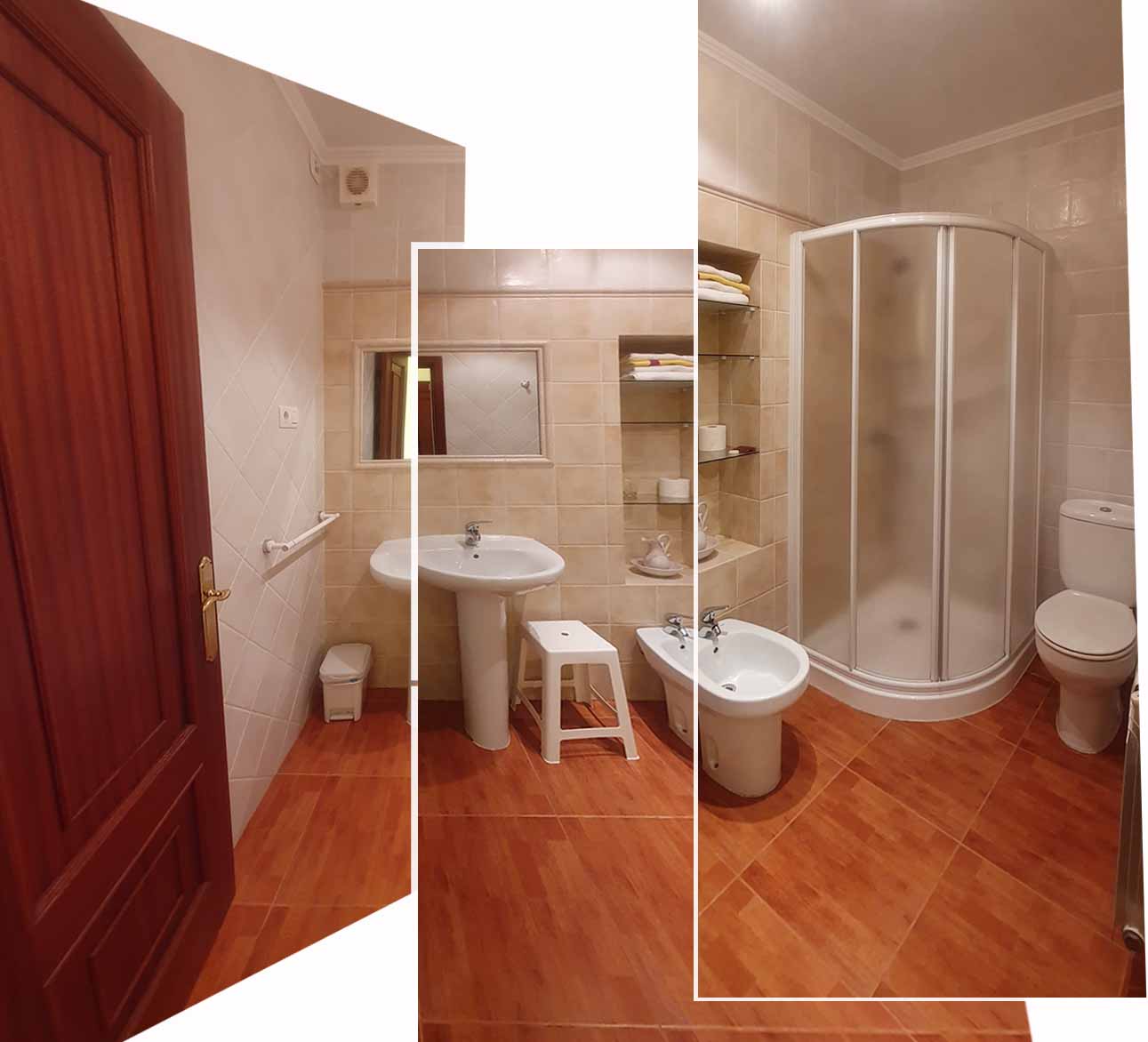 Ensuite toilet in our room

Our room costed €43 for a night (without breakfast), parking was free onsite. We parked our car just outside the pension directly beside the door to the shared kitchen/dining room.

The kitchen/dining room was beautiful decorated and we believed it was also the host’s kitchen. It was a full kitchen, unfortunately our host had blocked access to the stove by stacking many items like coffee maker, crockery, cups etc on top of it, so we had no choice but to use the microwave to cook our meal. 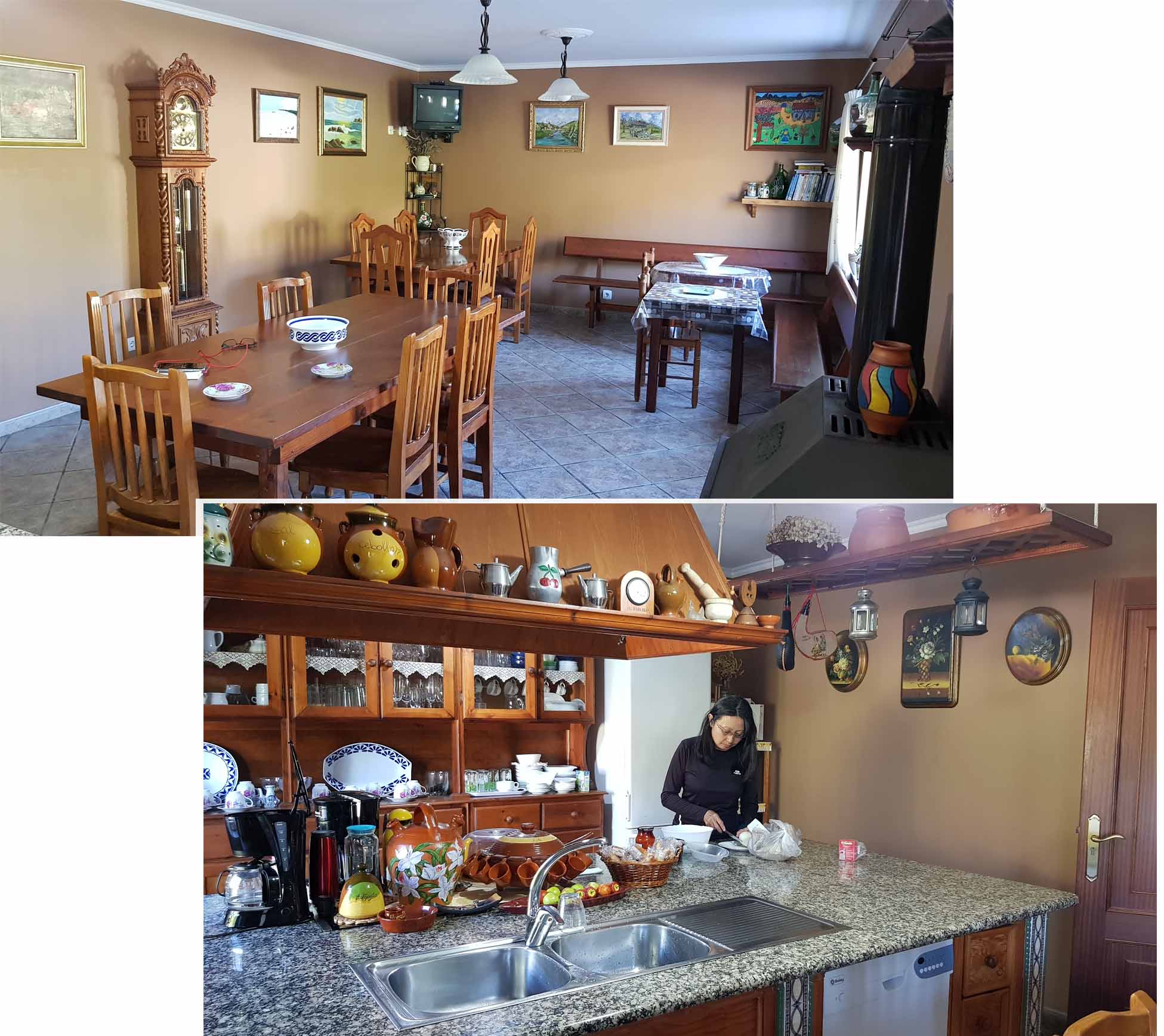 Pensión Casa Elena was a nice and reasonable price place for a night. There was onsite secured parking which allowed us to park our car close. The room was rather small but fine for just a nite. Though it had no view its location near As Catedrais Beach was a huge plus. There were no restaurants within walking distance but there were some within driving distance. Anyway we came prepare to cook dinner.