We left Arrifana at about about noon driving towards the western tip of Algarve. We decided not to stop at Bordeira’s beach as it would be similar to Arrifana beach we drove ahead to the “Lighthouse of Cabo de Sao Vicente”.

For the night we stay at Albufeira near its Marina. The next morning we drove back to Benagil Beach for a boat ride and this time we enjoyed the coast from the sea angle. Benagil Cave was certainly stunning and Praia da Marinha as viewed from the sea displayed another dimension of beauty.

The drive from Arrifana to Cabo de sao Vicente was about an hour over a distance of 53 km. Along the way especially near the last part of the journey we seemed to be the only people/car on the road. The surrounding land was wide,”yellow” and barren and the sun was hot and bright.

On way to the lighthouse

Surprisingly when we were near the lighthouse, we found the parking full of cars. These other cars/people probably came by another road to this place. All the lots nearer to the lighthouse were taken up so we parked a short distance away and walked to the light house. Along the way there were several mobile-stores selling drinks and local products. 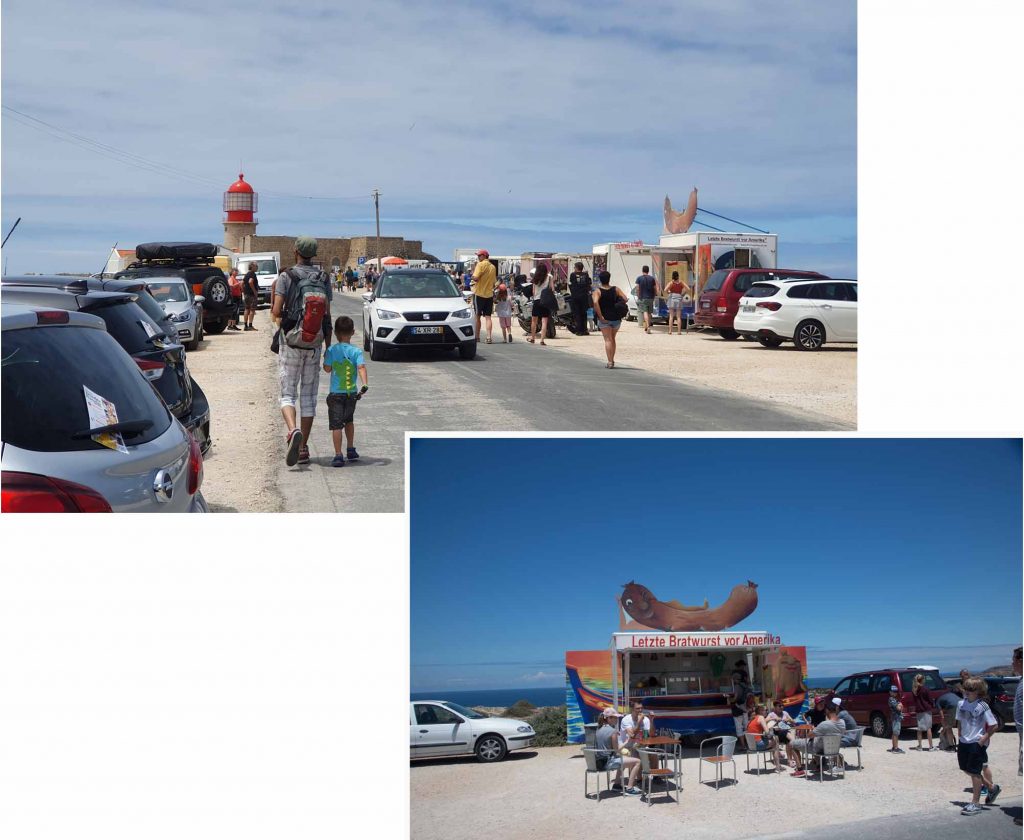 We explored the ground outside the lighthouse compound, going near the edge of the land around the “tip”. The scenery was awesome, the cliff was high and looking at its vertical drop down to the sea gave me “butterflies in the stomach”. The sky with all the clouds looked as tumultuous as the sea below. 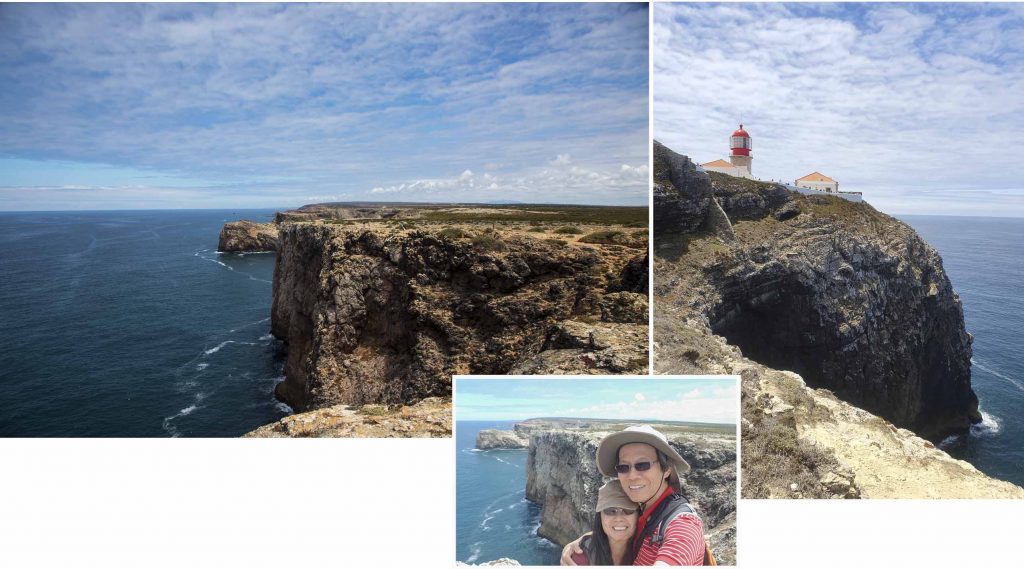 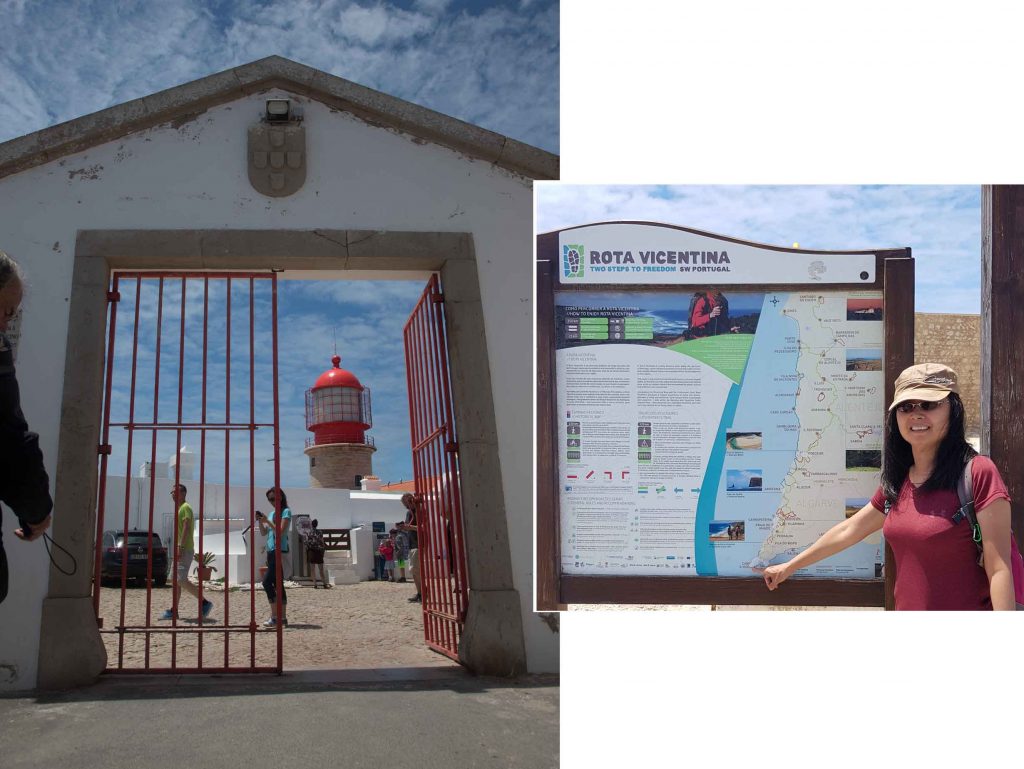 Lighthouse at the most southwestern point of Europe 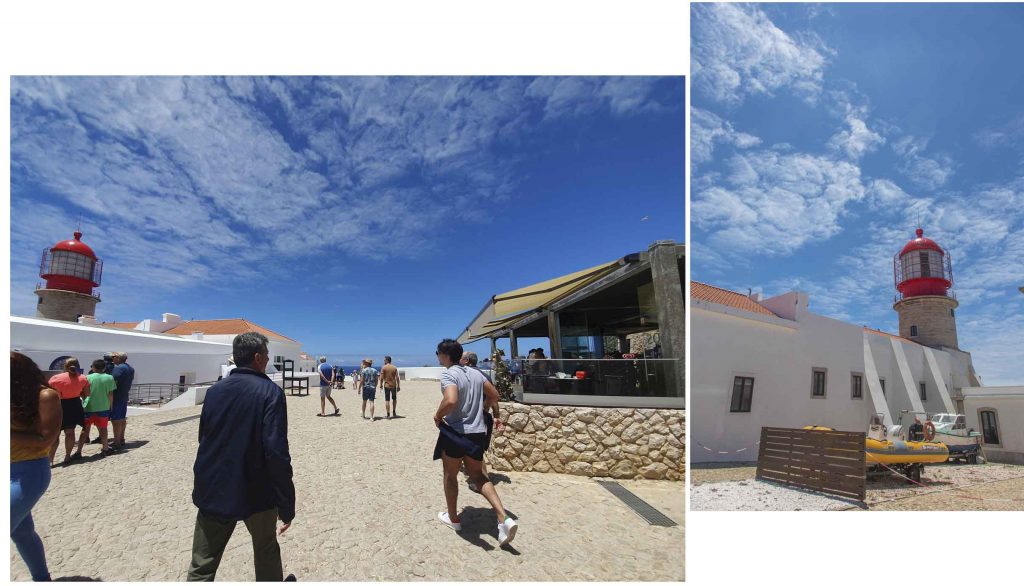 From the lighthouse of Cabo de Sao Vicente we drove a short distance of 6.5 km to Sagres Fortress.  The Fortaleza Sagres was located at the southern tip of the Sagres Peninsular and this uniquely designed fort protected the town from raiders from North African in the ancient past.

There was no parking on the sides of the road near the the fortress entrance. We drove further down and found parking but no empty lots.  By the time we found a space it was some 700 m away. It was a very hot day and though 700 m was not very far, it was a tough walk. 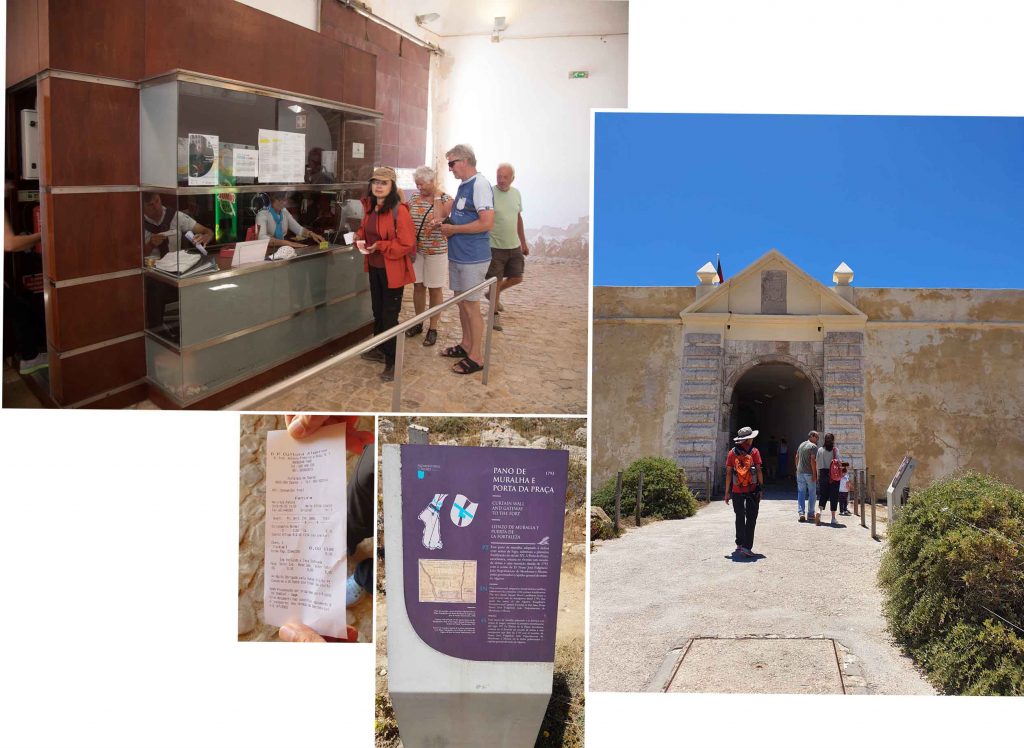 At the entrance of Fortress of Sagres

In the fortress compound we walked up a slope to the upper level/rooftop of the fortress building. From the roof we saw a giant wind compass that was used to aid early navigation. This compass measured 43 m in diameter. And we wondered “how does one uses it?” 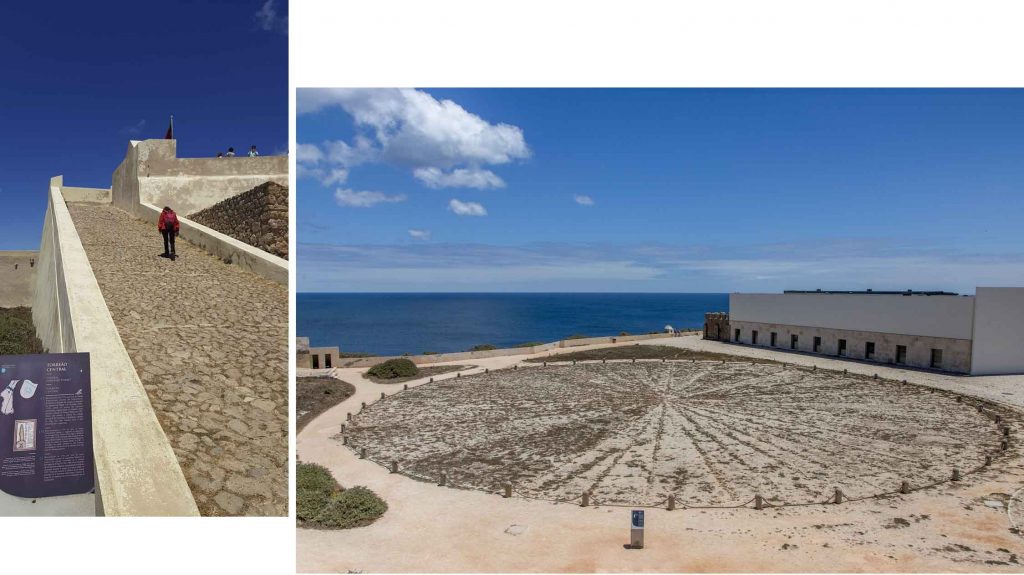 Beside the fortified high wall where the entrance was located there were no boundary walls around the fortress compound. The other sides of the  fortress ground were protected by sheer cliff drop. We walked out toward the tip of the headland and saw dry barren lands. From one section of the headland we could see the Lighthouse of Cabo de Sao Vicente far away. 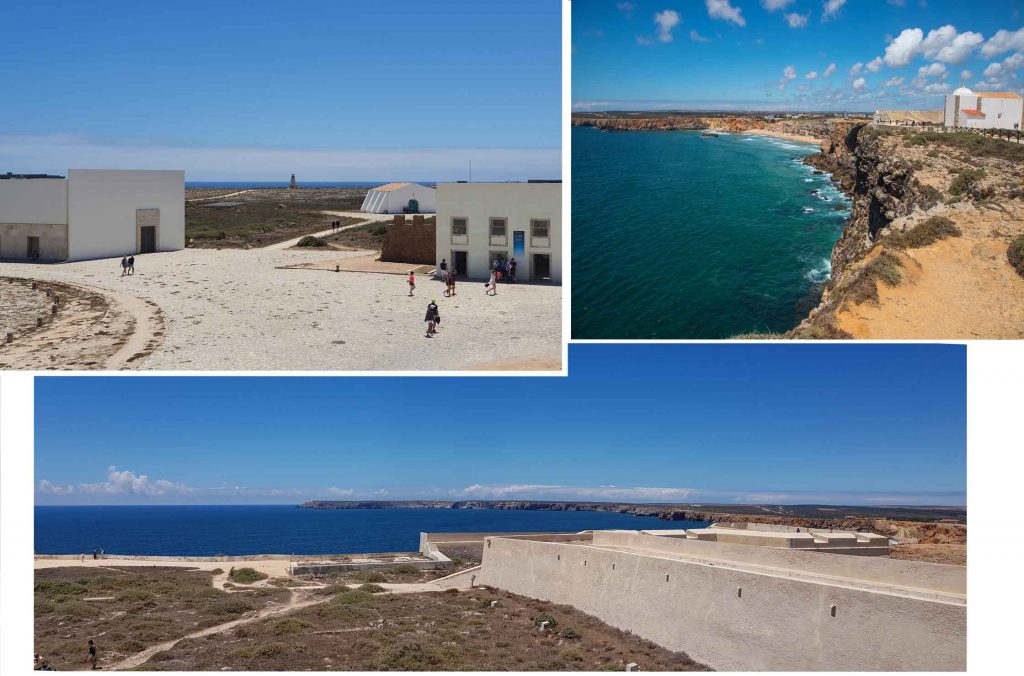 There was also a small chapel Nossa Senhora da Graca (Church of Our Lady of Grace)  in the fortress compound. It was built in the 1570s on the site of a chapel first erected by order of Infante D. Henrique (Henry the Navigator). The interior of the church was rather simple, with a single aisle and a gold painted altar.  It was an image of Our Lady with the Christ Child in the centre. On either side of the altar were two statues. One statues depicted St. Francis and the other depicted St. Vincent. 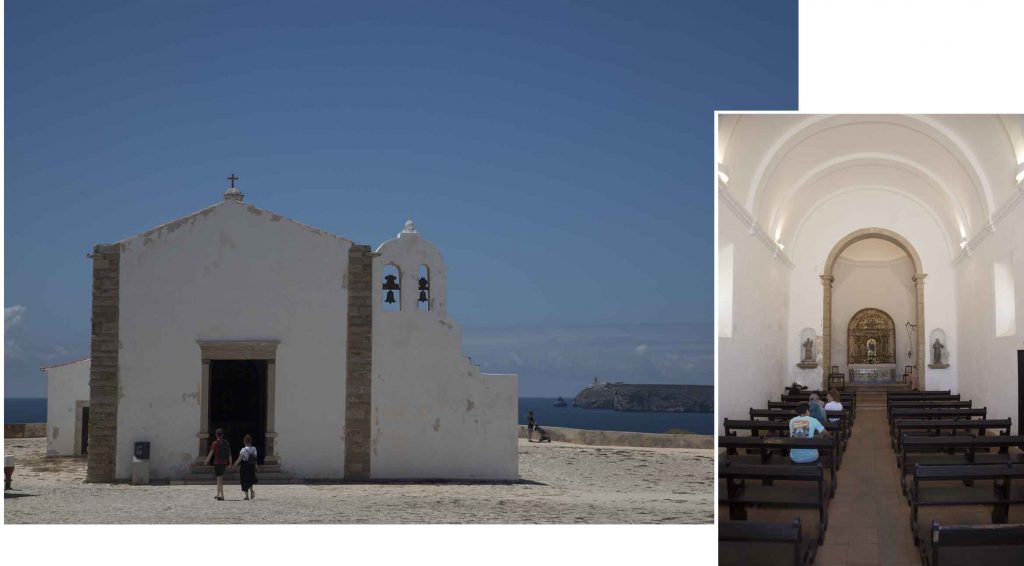 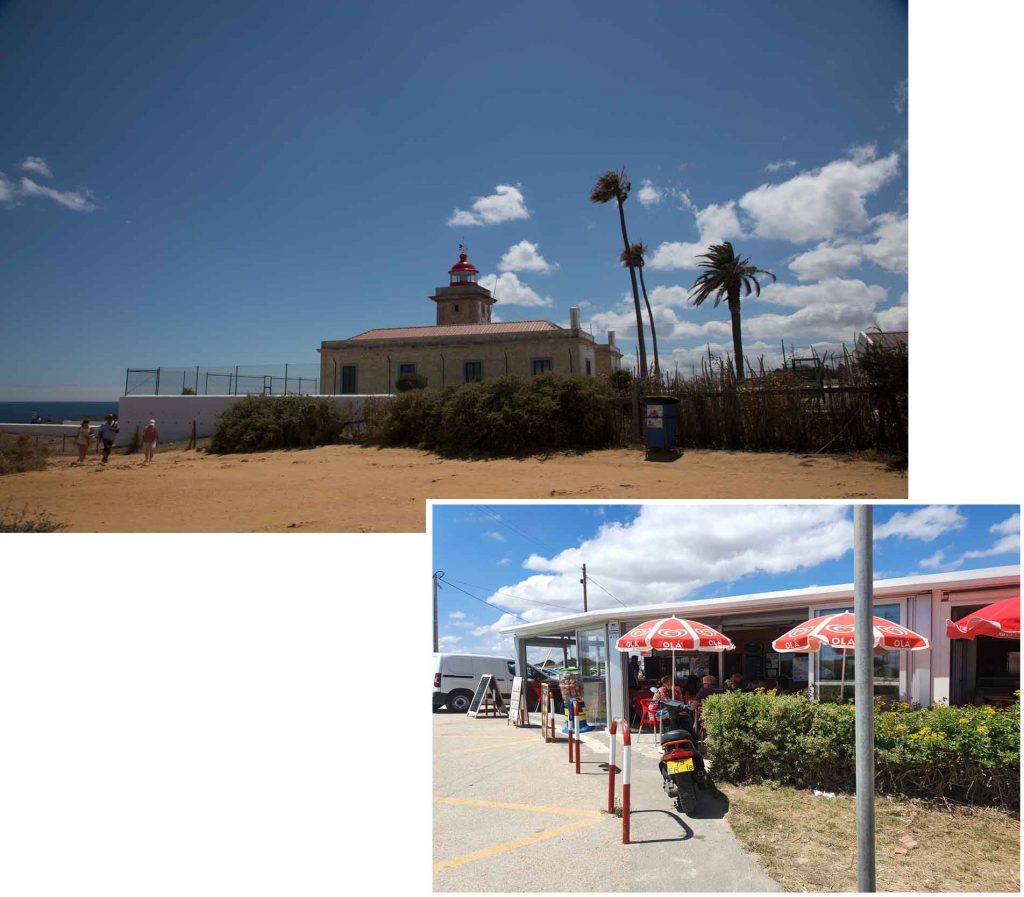 We followed a footpath and went toward the coast. The ground were surprising yellow in color. There were a number of paths and we took the path that went to behind the lighthouse. 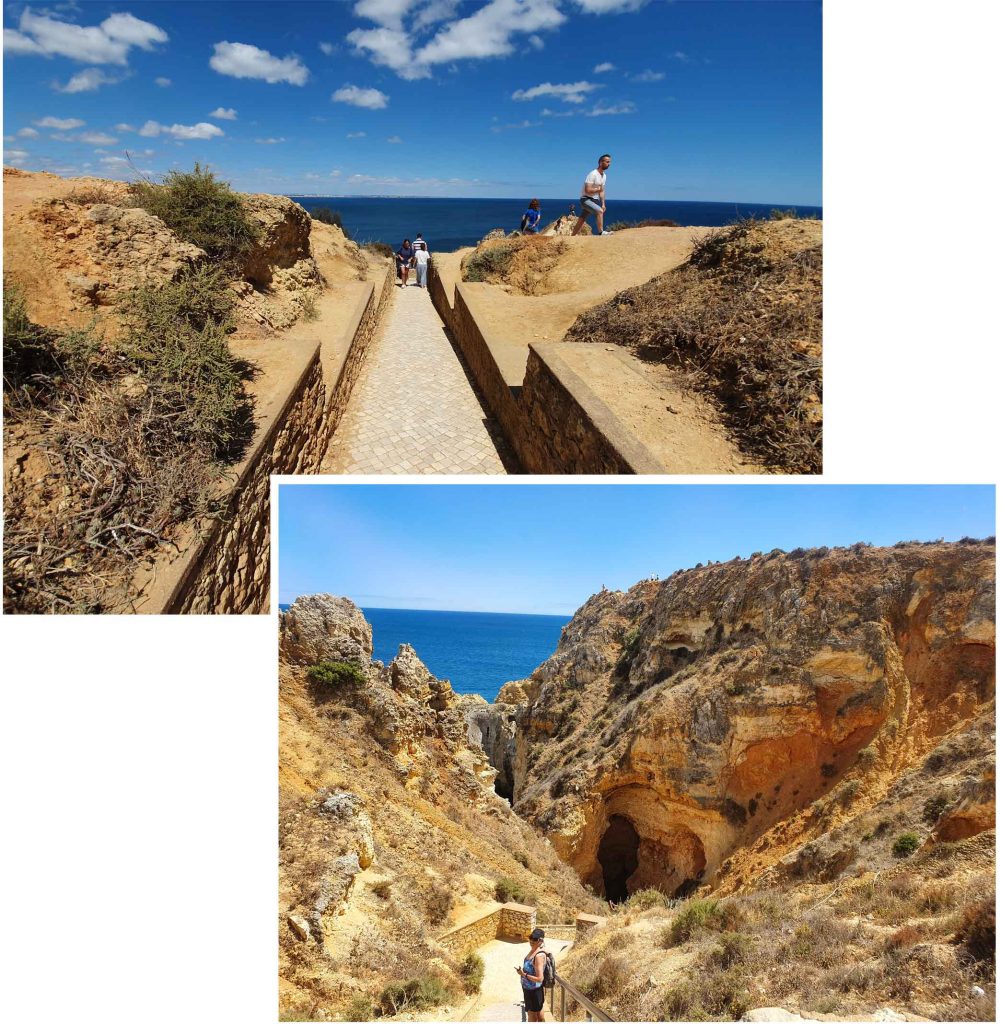 Walking paths to the coast

The coastal view at Miradouro da Ponta da Piedade was beautiful. It reminded us of the Twelve Apostles of the Great Ocean Road of Australia except that this was more beautiful. We found a dirt path that went up to a small peak and could not resist the temptation to climb to the peak. 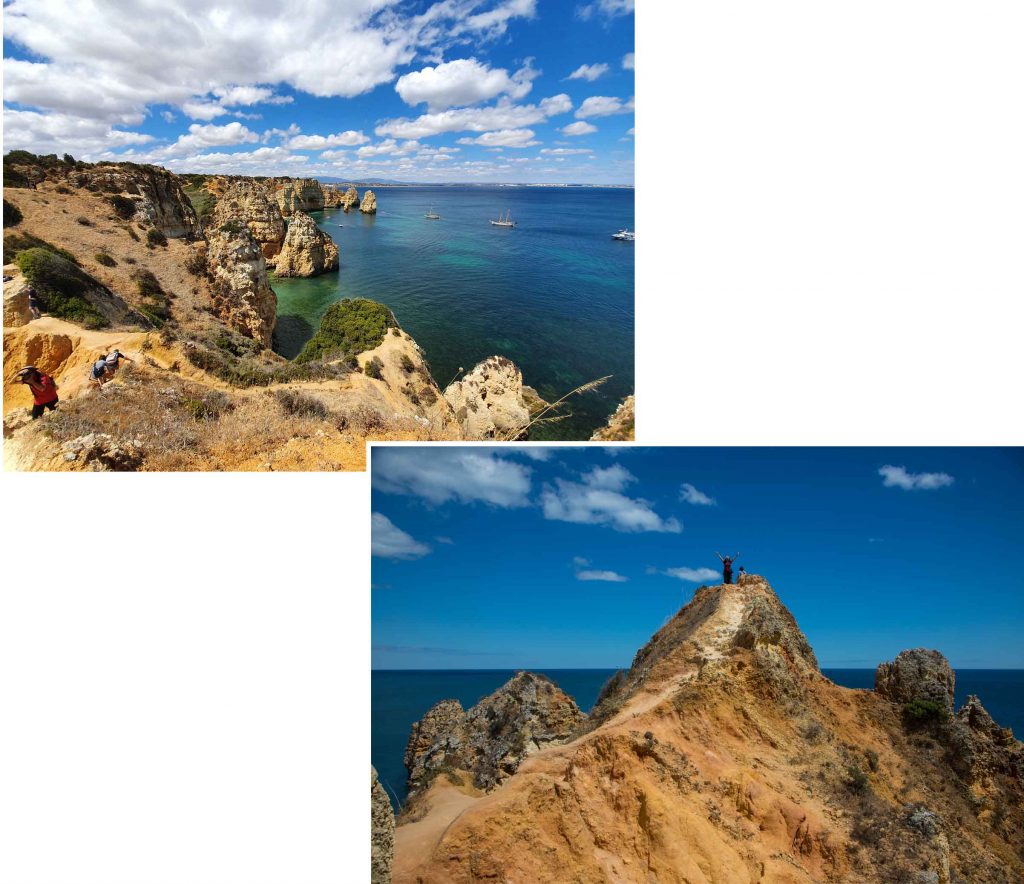 The sun was shining brightly and the “yellow” rocks in the sea appeared “golden”. It was a lovely walk and the scenery was unbelievably beautiful – beyond description by words. It was a pity that there was no cafe here overlooking this beautiful scenery. 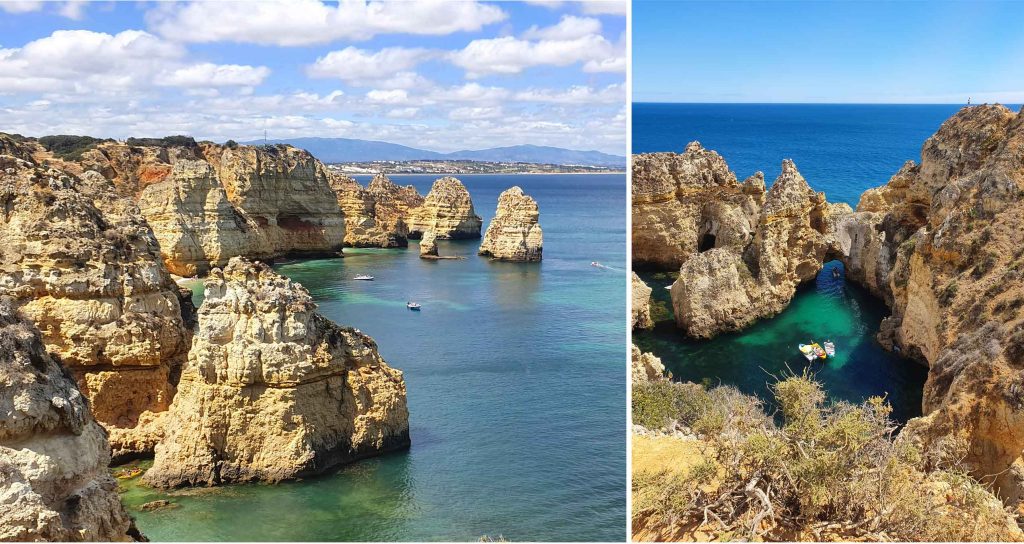 Before we left Ponte da Piedade,  on our way to our car we stopped at cafe “Sol Nascente” located just before the parking. We ordered two cafe latte for €1.70 each but could not find any nice pastry to go with our coffee. This day was practical our last day in Portugal and we were hoping to eat some Portugese tarts, unfortunately its seemed that only in big Portugese Cities we could get great tarts. We regretted not eating more tarts in Madrid when we had the chance. 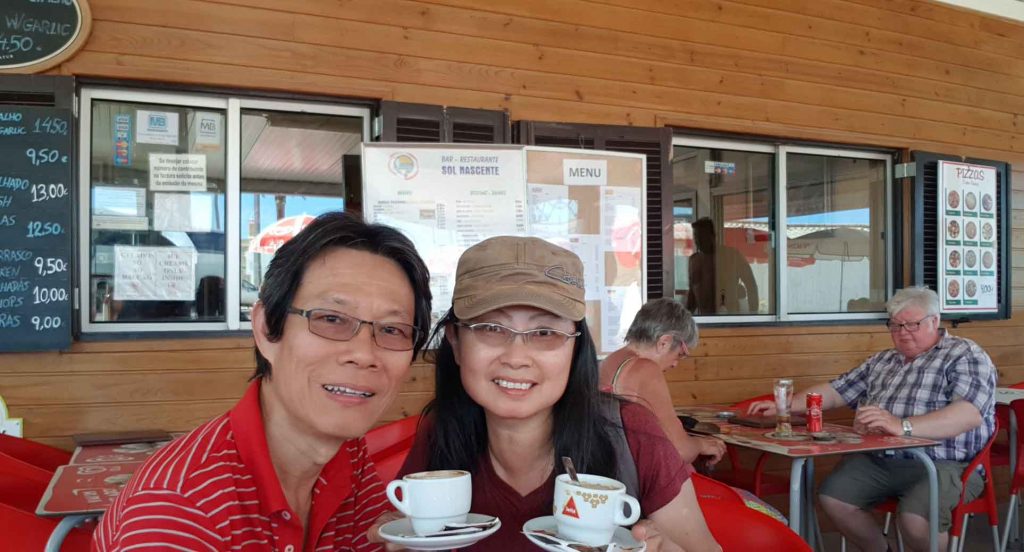 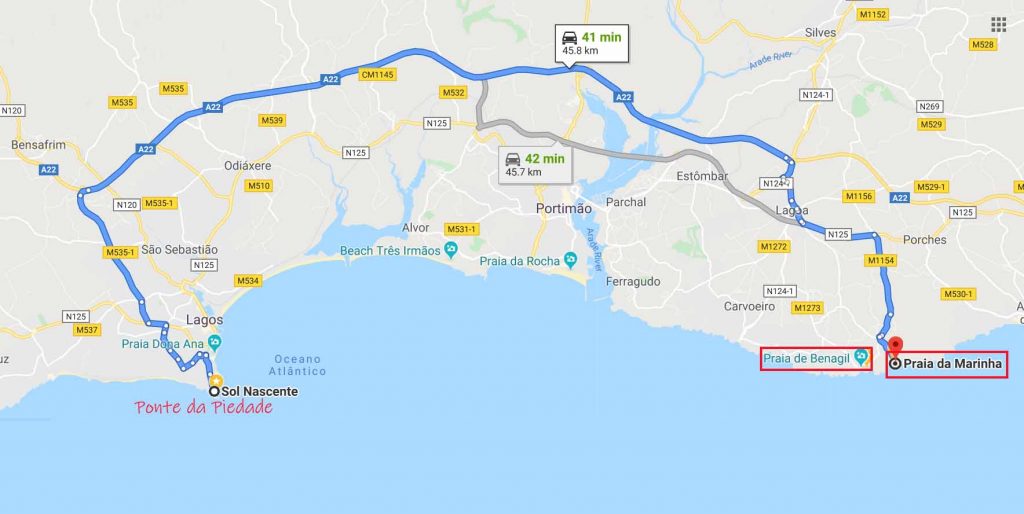 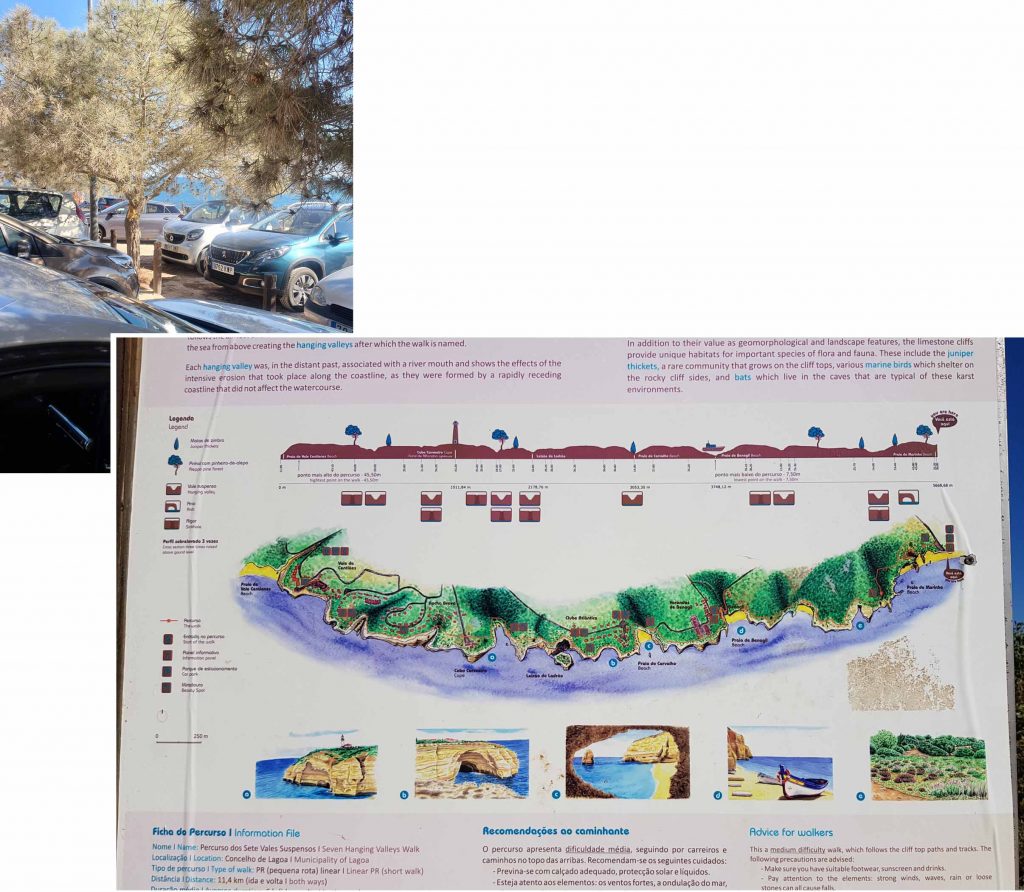 Near Praia da Marinha (Marinha beach) there was a huge carpark (co-ordinates: 37.090226, -8.412657) and it was filled with cars. Luckily we could still find an empty lot for our car. From the carpark we could take the left path that looped a bit down to Marinha Beach. Instead we took a right path tate stayed on the cliff.

We came to a  big map which showed the outline of the coast the many praias (beaches) below the cliff. The cliff path extended all the way to Benagil Cave and beyond. It would be a 2 km walk to the cliff above Benagil beach and another 2.5 km to the the cliff above Vale de Centenanes Beach. We did not walked that far.  We walked on to near Arcos Naturais, it was lovely. The “golden” rocks in the sea, the sea rock arches and the beaches below were beautiful. 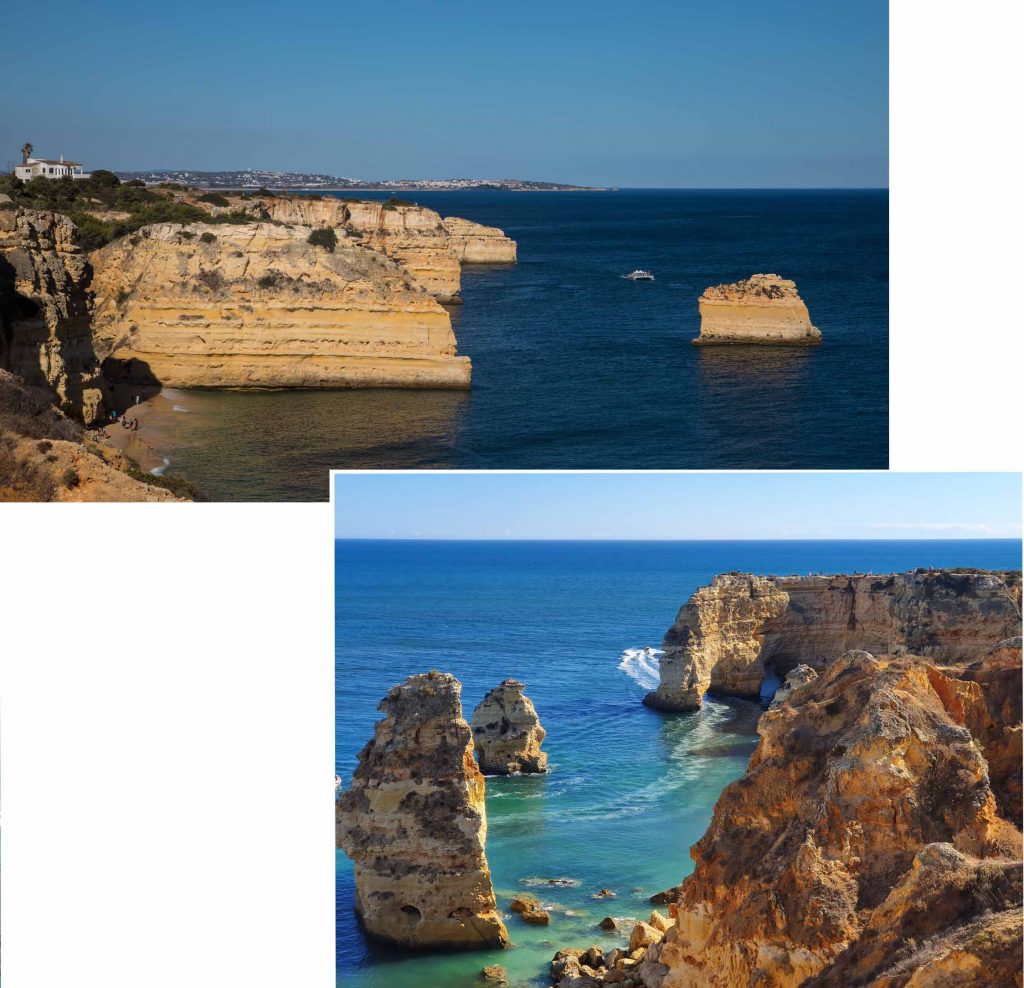 On the way back to the carpark we saw some very unique cliff formation. The colour of the cliffs was more orangy red than yellow. The cliffs looked like sharp, creased mountain ranges. 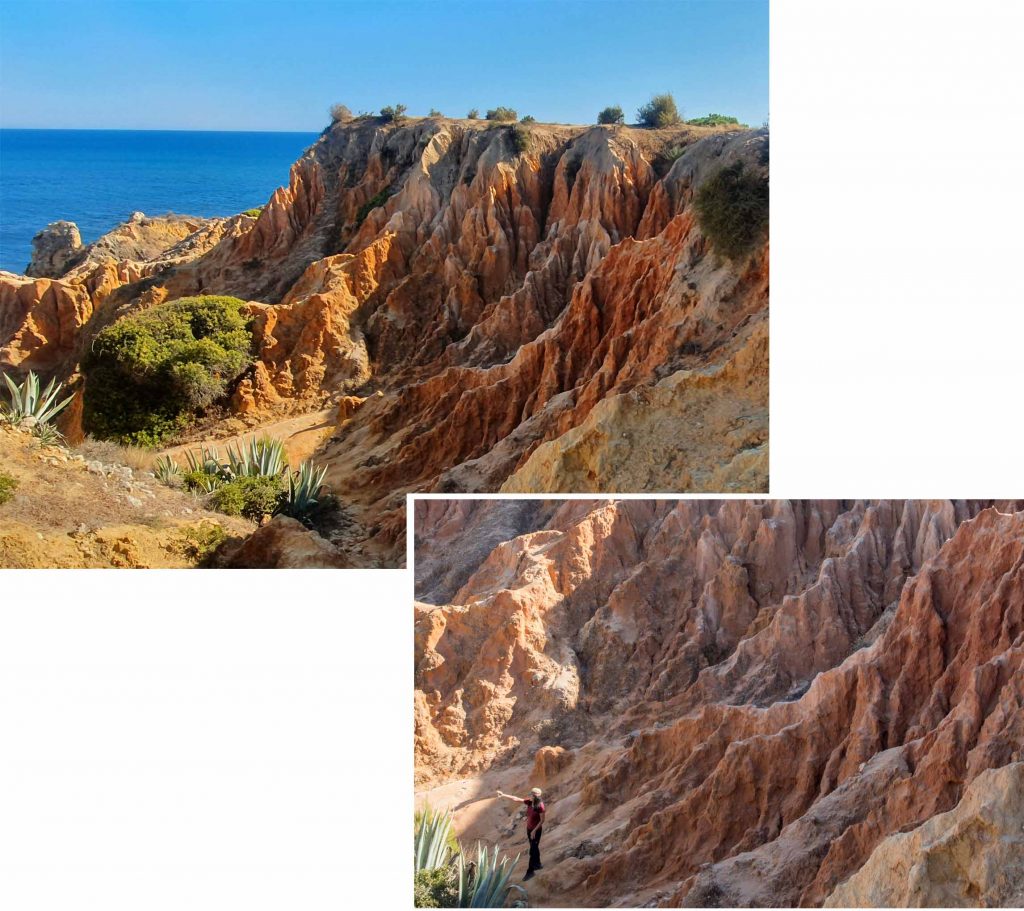 From our stay to Benagil beach was about 21 km and the drive took about 30 minutes. We left our stay at about 8.30 am after breakfast. There was no parking near the beach and the nearest parking was about 300 m away. It was a steep walk down to the beach. 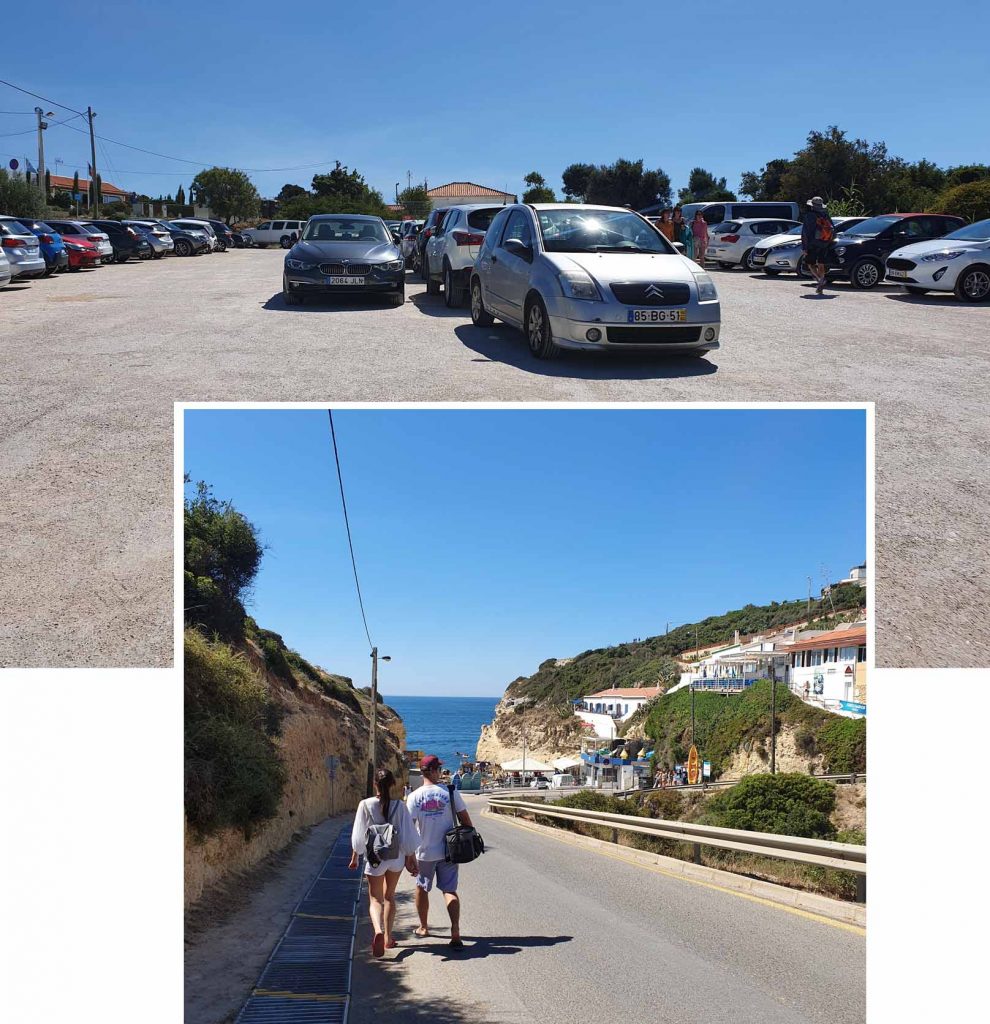 The night before we went online to reserve two places on a 30 minute Boat Tour on “Taruga Benagil Tour”. The boat tour included a viist to Benagil Cave and some other caves and a couple of beaches. This tour would not have any beach stop or swimming top. We arrived at the ticketing kiosk of Taruga Benagil Tour at about 9.25 am. The kiosk sat directly on the Benagil Beach which was just a small bay. 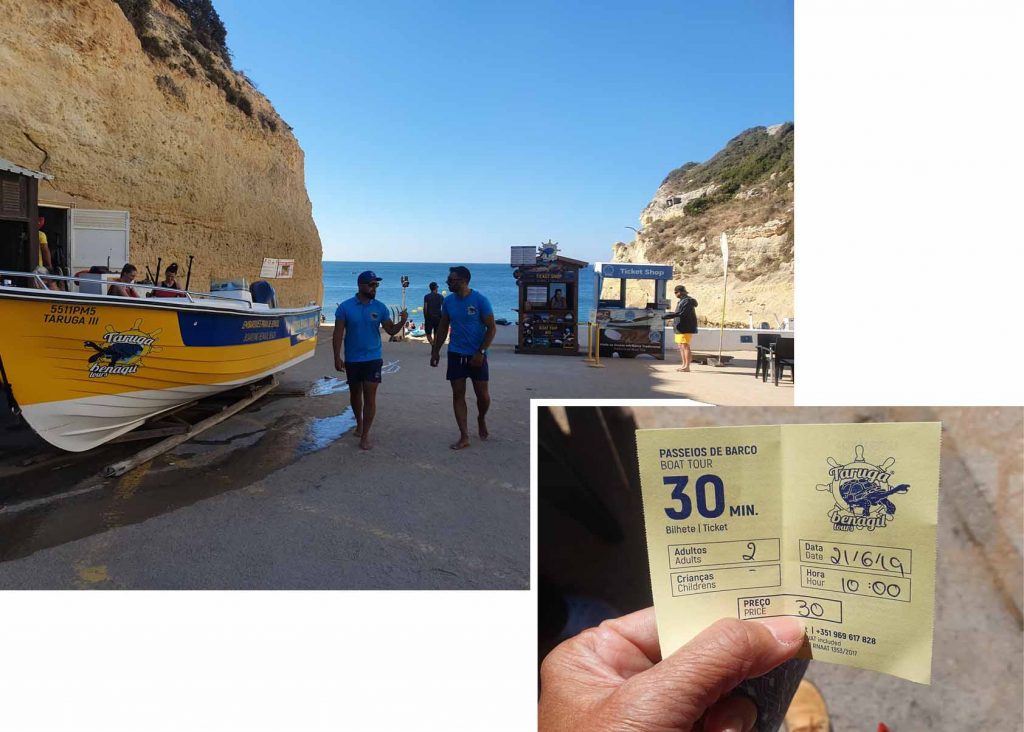 Picking up our Boat Tour Ticket at Benagil Beach

We made payment for our boat tour, it was €15 per person. Our boat tour started at 10.00 am and we had 30 minutes to kill. So rather than stood around doing nothing we went to a cafe nearby to have our morning coffee. 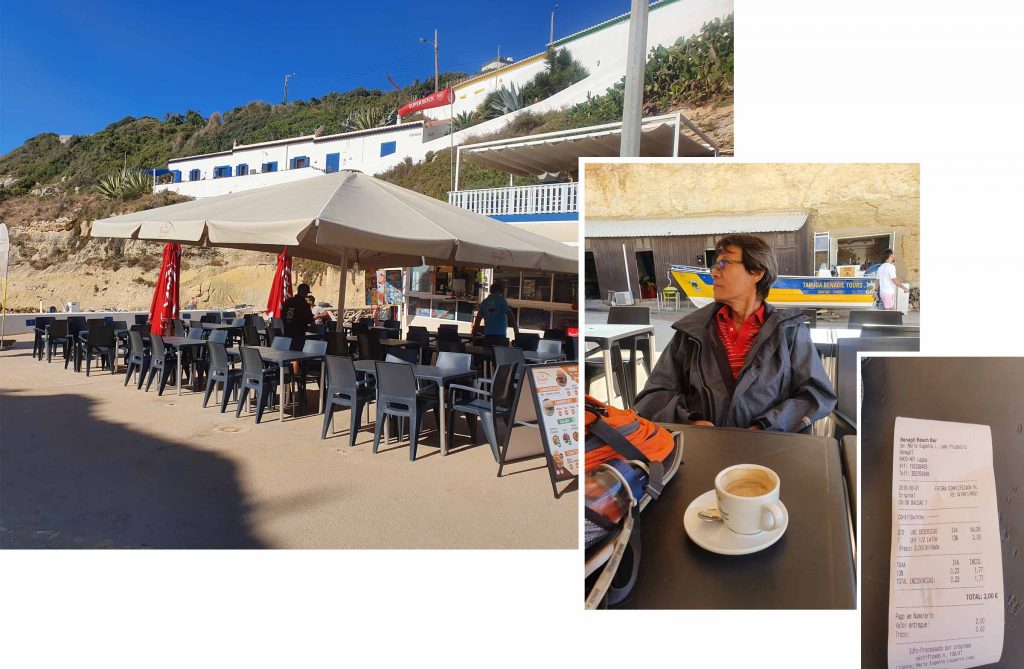 At 10 am we were back on the beach. The boat arrived on time, we had to take off our shoes to wade into the water and get into the boat. On hindsight we should have wore slippers. There was about ten of us and a guide/boatman. On the beach we saw that Taruga Benagil Tour also offered canoes/kayaks and stand up paddles. 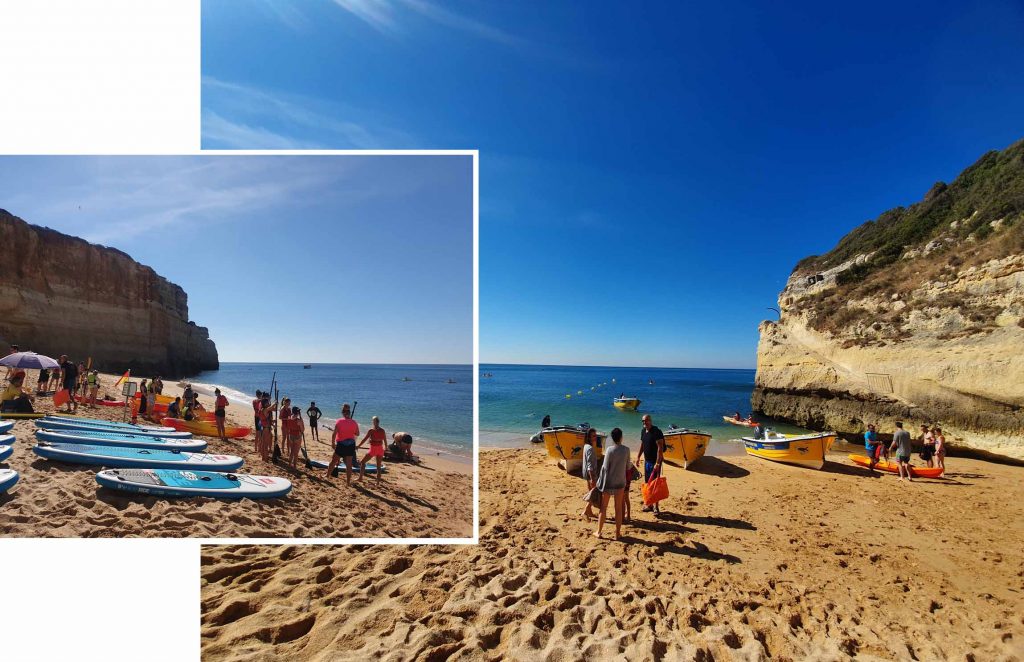 Boarding the boat for our 30 minutes boat ride

Our boat “sailed” to the left side of the bay and into a hole in the cliff and that brought us to Benagil Cave! I thought it was much further away! I had read on the internet that it would be a long distance to swim from the beach to the cave and even paddling to the cave needed great deal effort. But being there and looking at the situation it was only a 300 m paddle. 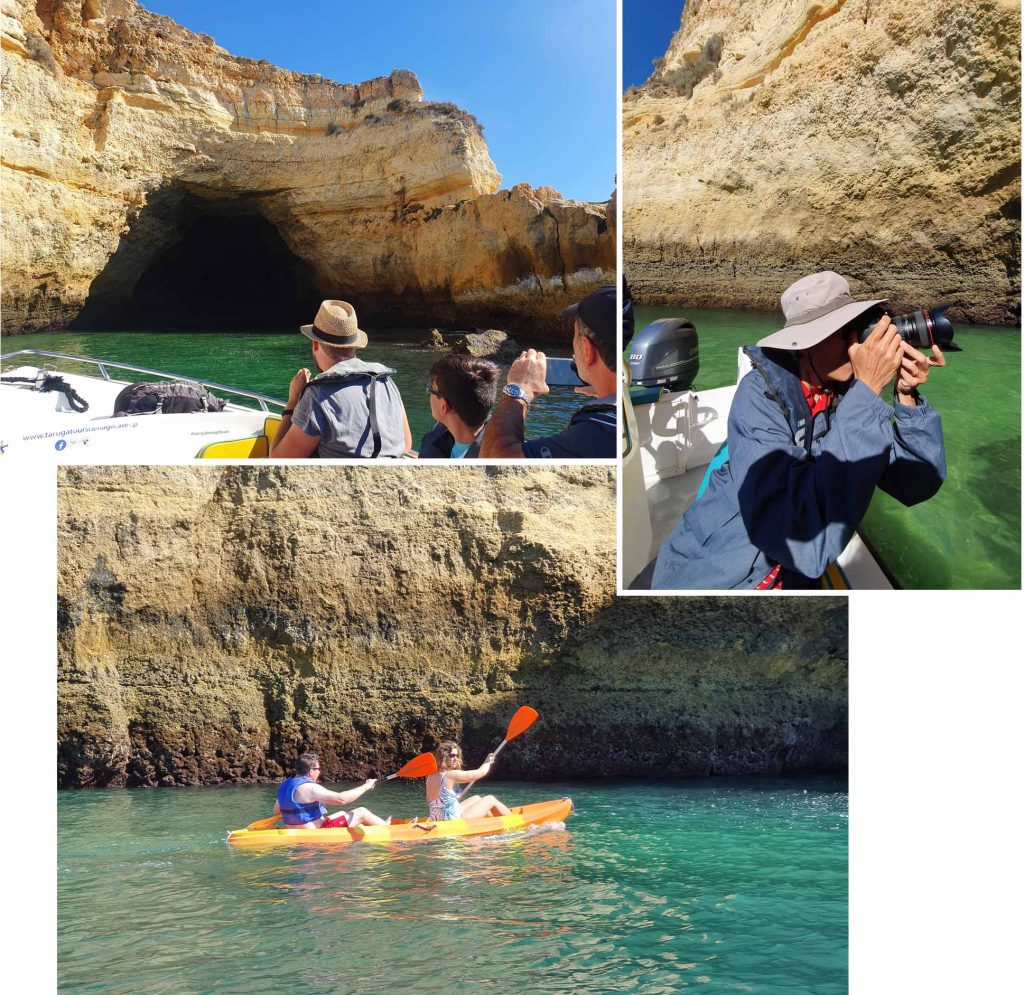 The cave was indeed magnificent. We saw many people who paddled into the cave, pulled their kayaks onto a dry area of the cave and came out to walk about and explore. We requested for a stop on the “beach” in the cave but our boatman said no. Boats were not allow to “beach” in the cave. Oh! what a shame! Our boat did not stop long in the cave and left after about only 5 minutes.

After the Benagil Cave our boatman brought us to a couple of smaller caves which were not as impressive as Benagil Cave. The boat went eastward and soon we saw the yellow rocks and sea-stone-arches that we saw the day before when we were walked on the cliff of Marinha Beach. It was wonderful to view this golden coast from the water side. 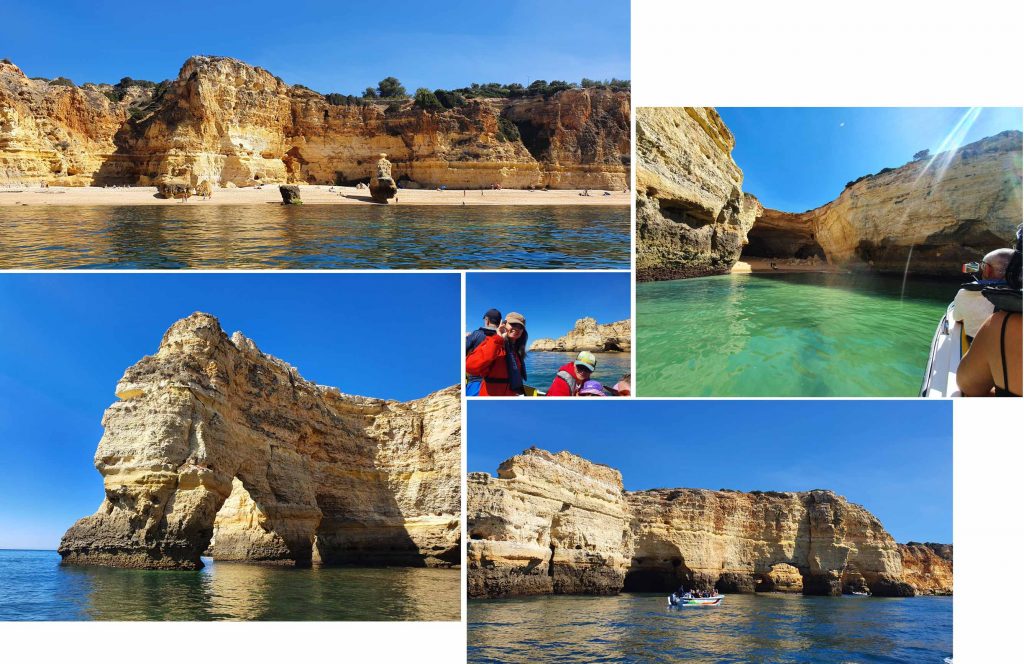 We booked an apartment at Orada Apartamentos Turísticos in Albufeira for one night from booking.com. The cost was €77 per night and parking onsite was free.

Finding Orada Apartamentos Turísticos was easy but checking in was terrible. We waited for close to an hour as there was only one check-in staff and she was sorting out some issues with a couple in front of us and the issue took one hour to be resolved! 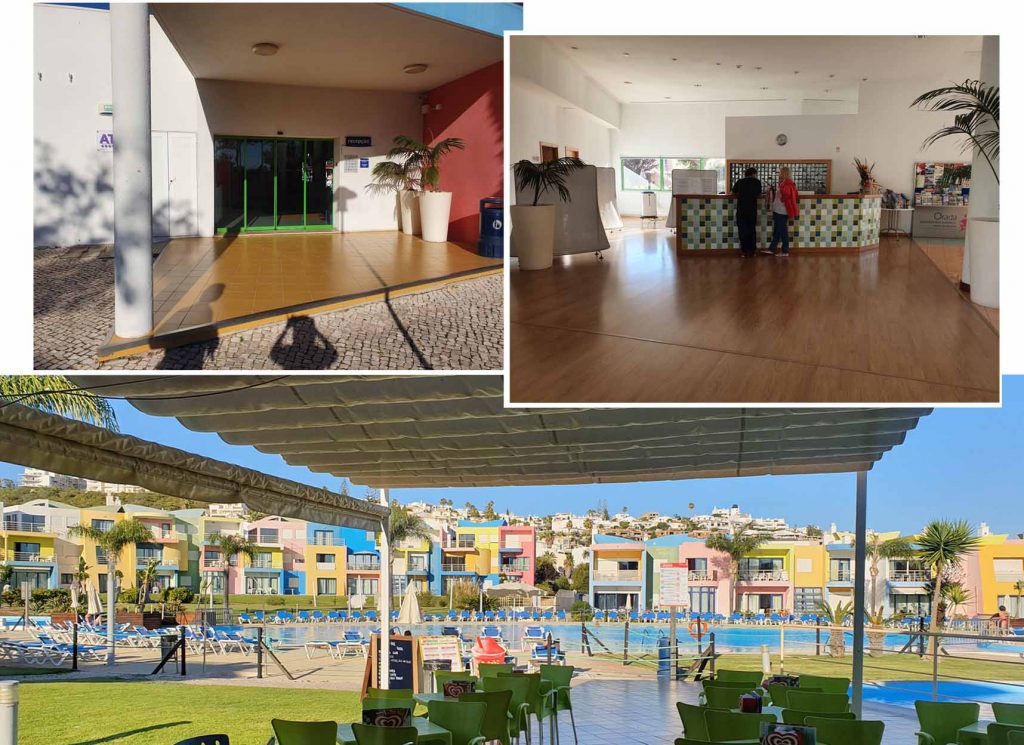 Orada Apartamentos Turísticos was a group of holiday apartments. It had apartments of different sizes, some was studio like ours, others were 2 bedrooms, three bedrooms etc. Our room was one big area with a very simple king size bed in one corner. In the room was a square dining table, a wardrobe, a television and a sofa. Our apartment was on the ground floor and it had a patio with garden table and chairs facing a shared garden. I thought the bed looked odd without a headboard. The room was large and clean but it looked kind of bare and impersonal. 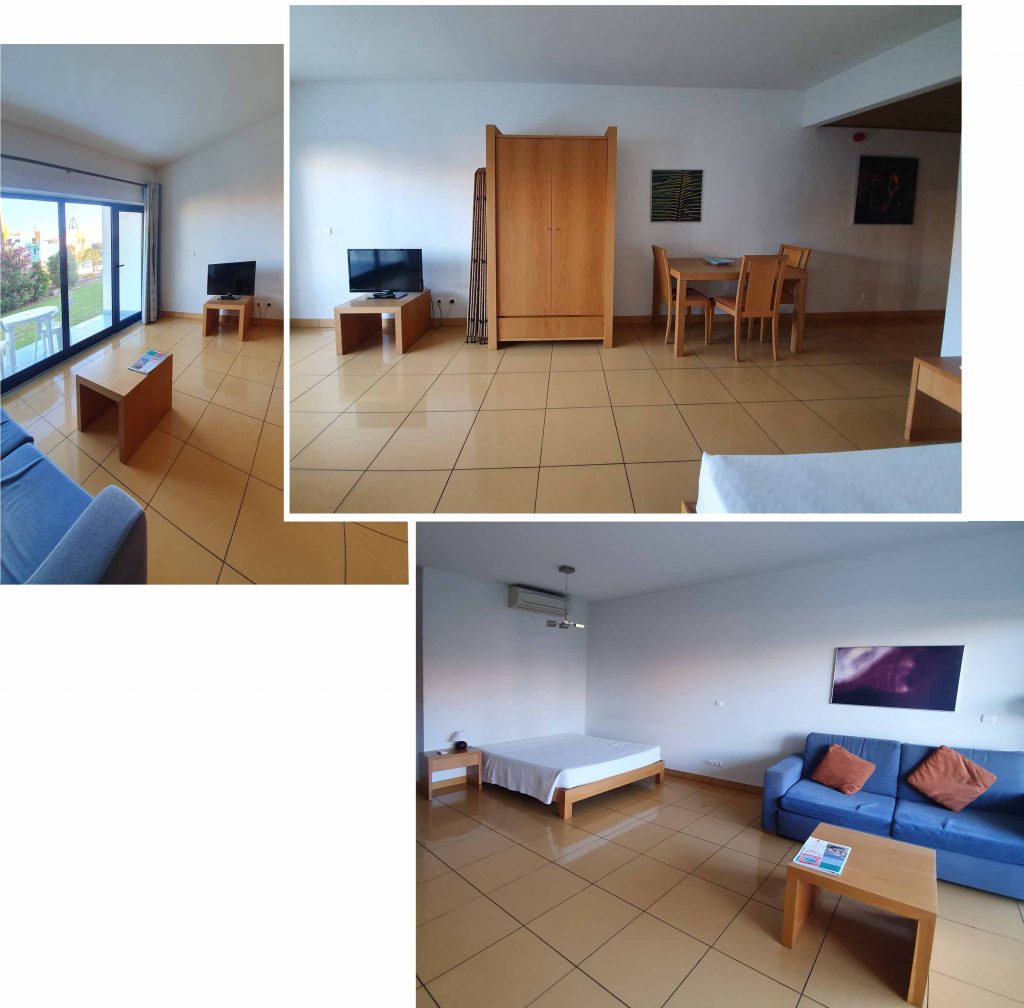 Our Apartment at Orada Apartamentos Turísticos

The kitchen was lovelier than the room. The wall tiles were colorful and vibrant. The kitchen had everything we needed to cook a good meal. We cooked a lovely dinner and a breakfast in this kitchen. The only thing missing in this kitchen was a dish washing sponge which made cleaning a “headache”. 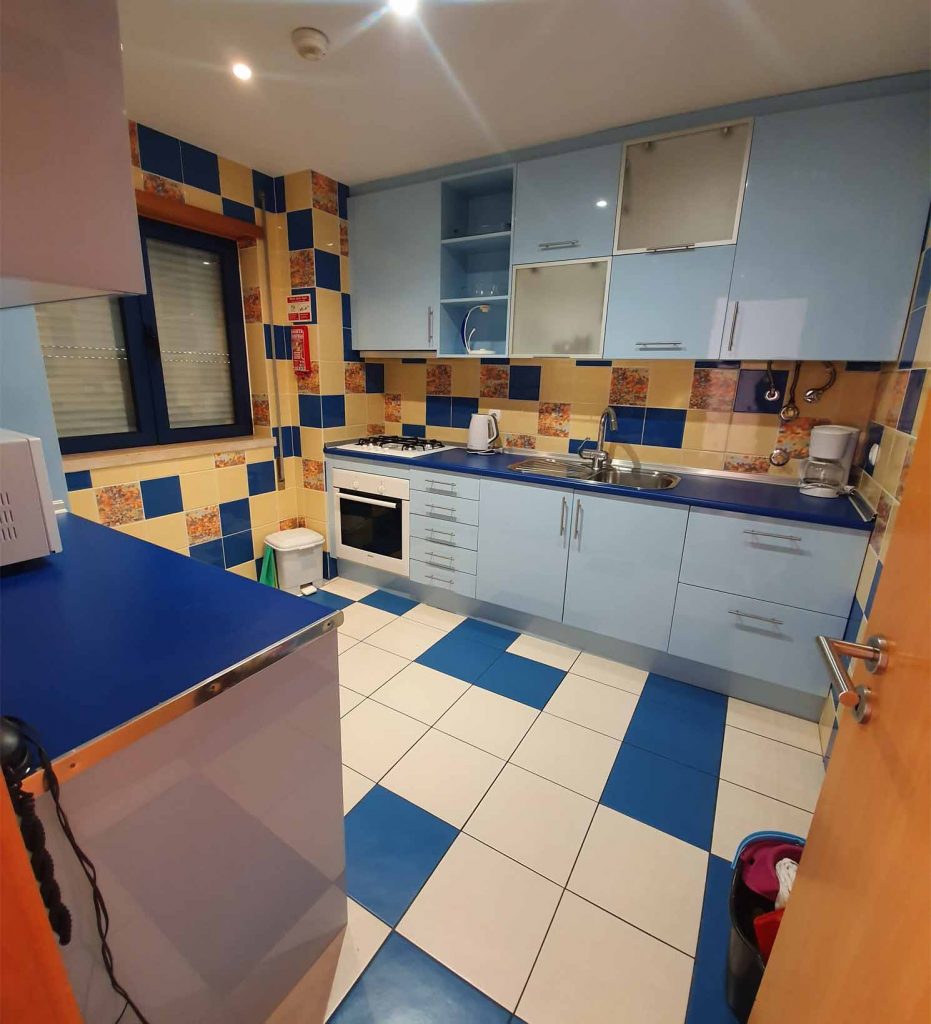 Our kitchen at Orada Apartamentos Turísticos

The bathroom in the apartment as colour as the kitchen. It was large and clean. 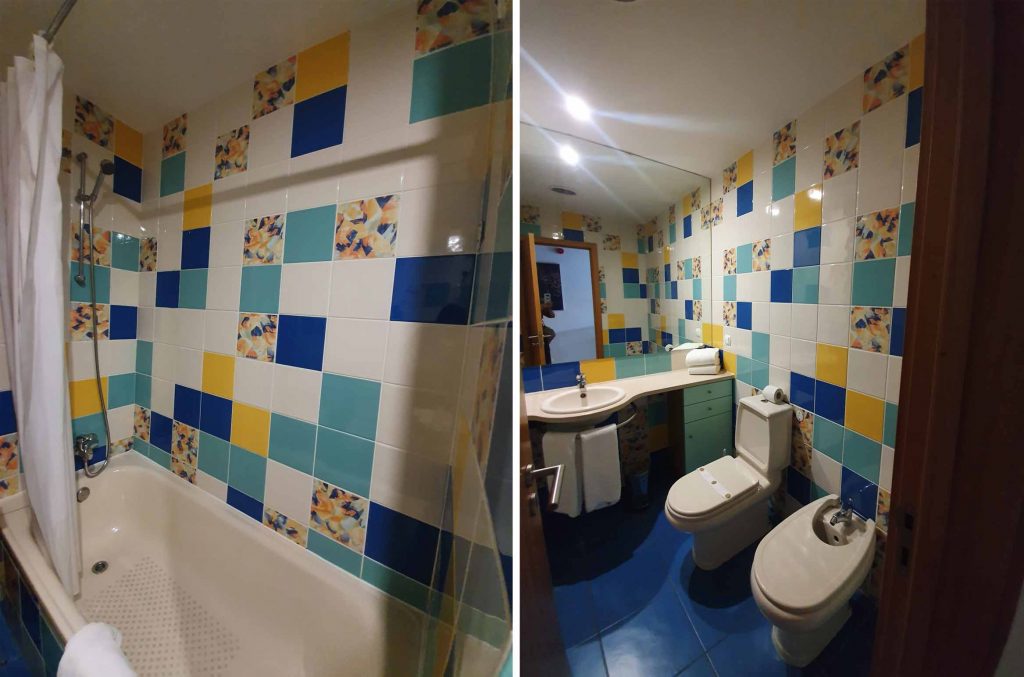 Bathroom in our apartment

The first evening I grilled pork belly using the oven. We had a great time relaxing in our patio eating our dinner. It was a nice to “eat in” and we could do it slowly without worrying about getting back to our stay after dark. 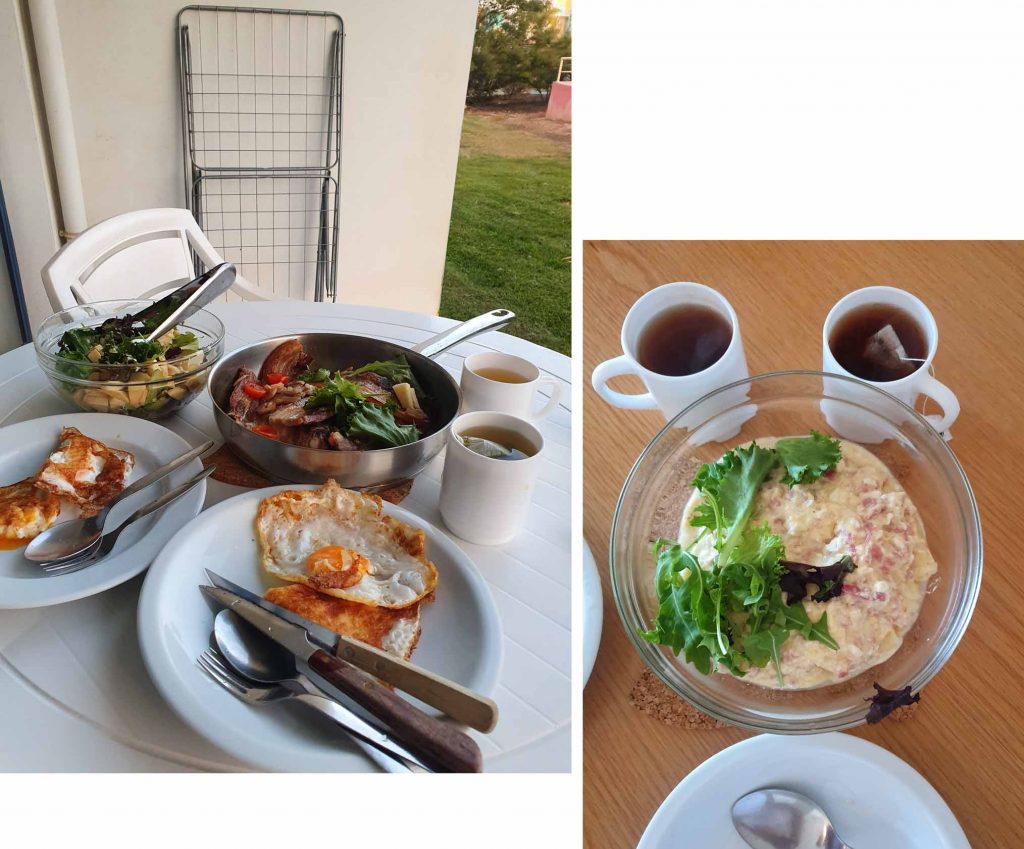